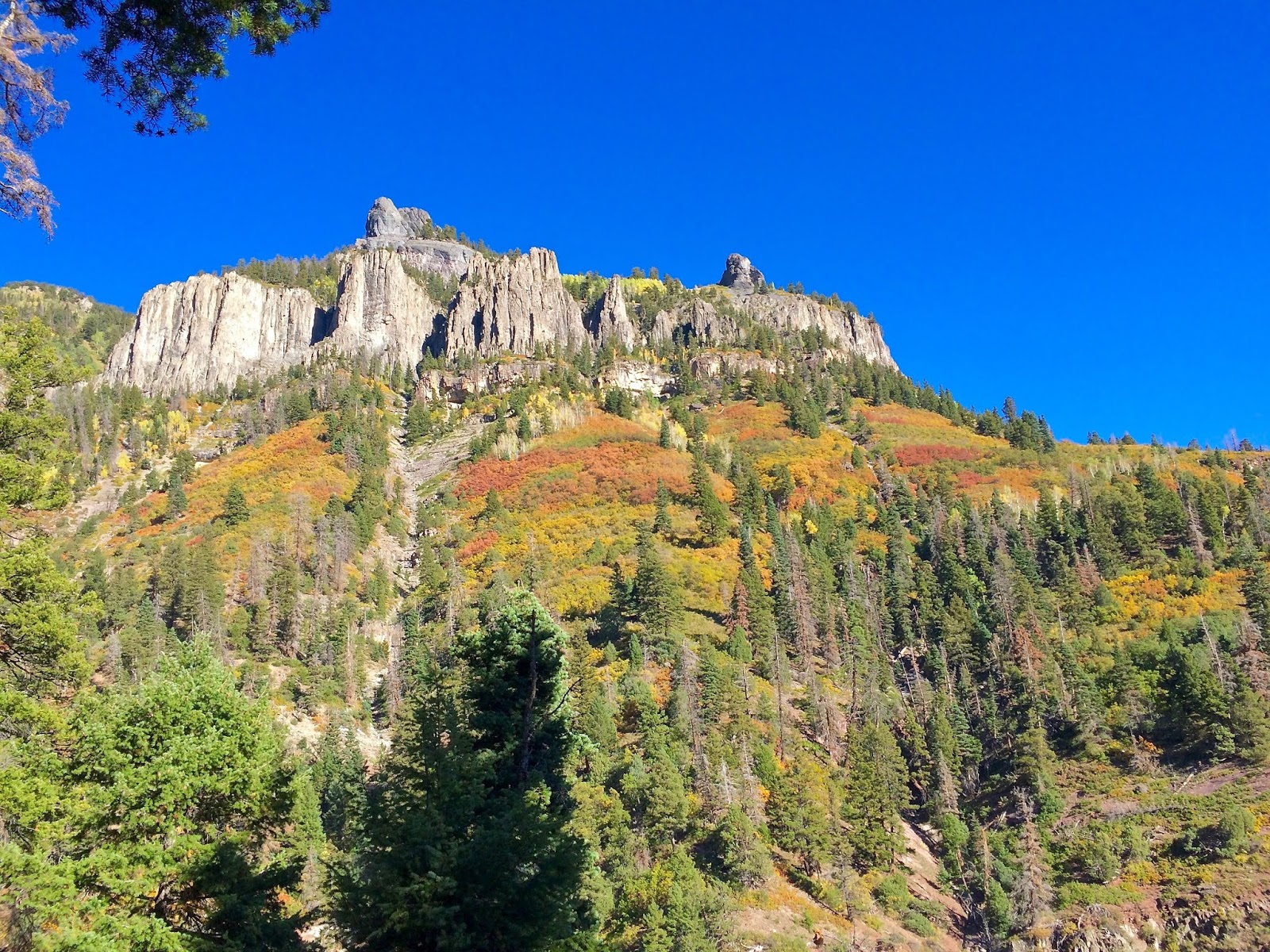 Wilderness: An escape in which the vexed inner self dissolves into a serene outer reality.


Bobbie and I squeeze in a couple power-hikes up Oak Creek Trail (OCT) once or twice a week. OCT is a reasonably steep (oxymoron?) cardio workout—doubly so when pumping 8 pound hand weights.

We are having such beautiful days. So it bewilders, how people choose an indoor treadmill or stationary bike at the Hot Springs Gym instead of going outside. But who am I to judge? Maybe it's the bears now roaming the woods in force, trying to fatten up for hibernation. Then again, our bears are vegetarians.

From our turn-around point on the OCT, I take note of autumn's glow. Golden aspen and oak brush on Twin Peak's broad shoulders serves as a reminder that it's time to shag dat monkey, exorcise a few demons, and maybe even tempt ole "Grim."

Summers are getting warmer every year, so spring and fall are better suited for biannual timed ascents to the summit of Twin Peaks. Unroll eyes, please; it's something I've come to love doing, something I need to feel alive and well while awaiting the inevitable decline of fitness and endurance levels.

Before you get your panties in a wad, call me out as some hubristic braggart, realize that, for me, physical endeavors are as much a necessary prescription for mental health as they are for physical health. We are who we are, like it or not, and we all have coping mechanisms be it drugs, alcohol or whatever. For me—an accidental genetic amalgam of a daddy and momma who likely got carless after a little too much wine on some cold January night back in 1950—physical challenges temper familial-based demons that lurk on the dark side of my DNA moon.

Believe it or not, I enjoy stop-watching a few routine hikes and climbs. It helps to keep me interested in living...putting up with Geezerdom's haunted house of impending horrors and the medical menagerie of pharmaceuticals it takes to keep me upright. Though unproven, it's my theory that if one can walk/hike/bike/climb today, it's probable they will be able to do so tomorrow. So I keep it up, because, so far, it seems to be working.

Thus, I find myself panting like a panther near the bottom of Old Twin Peaks Trail, squinting skyward at a distant sentinel objective that towers some 3000 vertical feet above Lovely Ouray.

While my biannual timed scrambles to the summit of Twin Peaks are more or less "who gives a shit" to (most) readers, they are relevant, necessary, and consequential to my quality of life and sense of well-being. For whatever reason (likely defective genes) I have learned that an active, push-limits lifestyle keeps me on a more even mental keel. A week of sloth and and I become a sinking ship. Sometimes I worry, what will replace my "silver bullet" when I can no longer drown demons in endorphins ?
Now that I've restated the "why," I'll move on to the outcome. 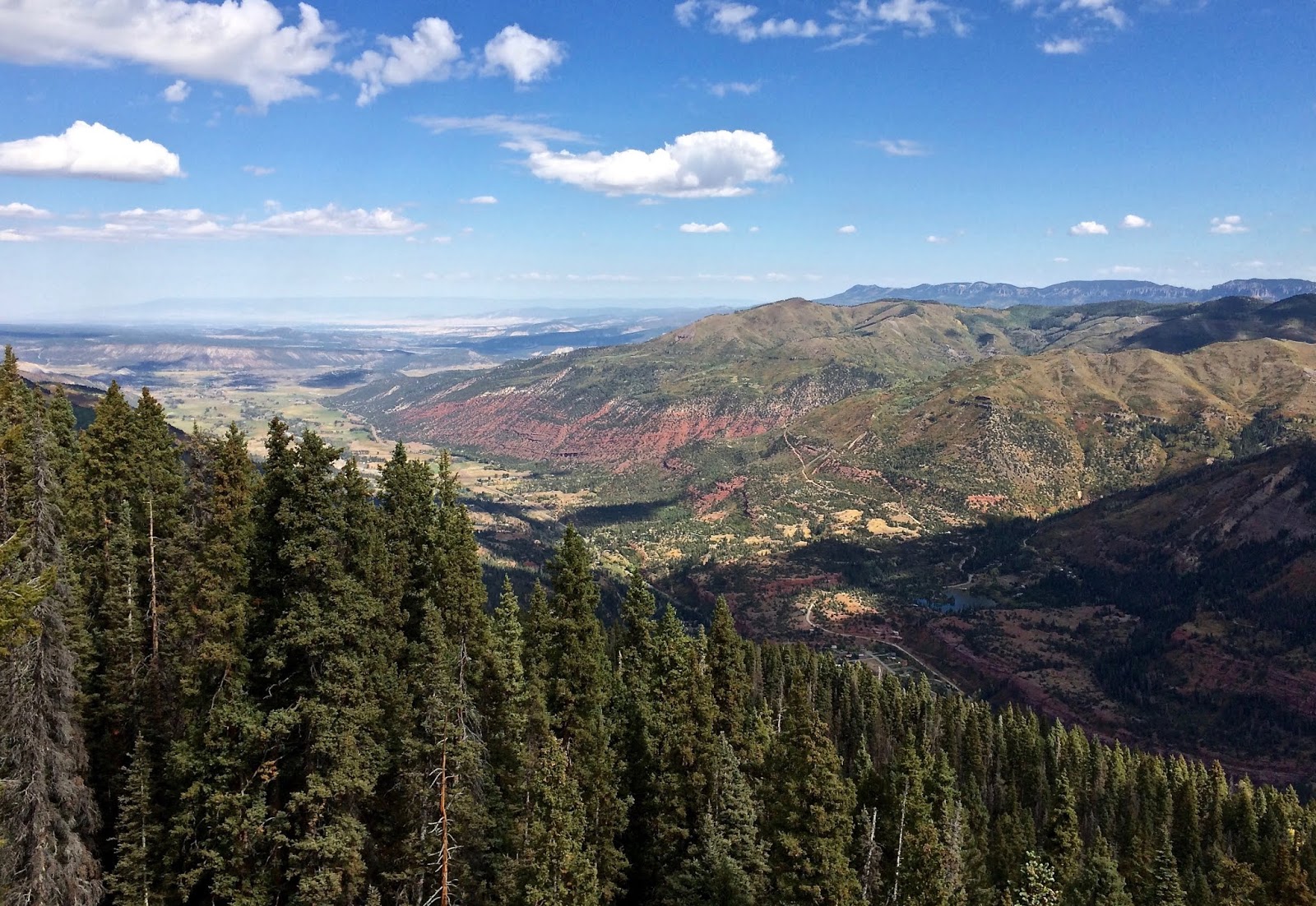 Old Twin Peaks Trail is the shortest and most direct route to the summit of Twin Peaks. On a good day it's precipitous, eroded and loose...a sun-beaten, traction-less series of switchbacks up a Couloir from Hell. In loo of awkward crampons, I carry a hiking pole as a makeshift "emergency brake," a necessity to negotiate sections of slippery, off-camber trail. Though it's not really dangerous when hiking under control and taking one's time, Old Twin Peaks can get sketchy at "race pace," especially coming down.

Old Twin Peaks Trail tops out on a lovely aspen-groved bench that overlooks Ouray. It provides a brief, relatively level opportunity to catch breath and pop a caffeinated Shot Bloc, which I wash down with equal parts Gatorade Frost and ice water. The surge is welcome, but temporary.

The incline returns soon enough. It's rutted, rooted and rocky from increasing tourist traffic. I must watch every clumsy step, and feel off-pace and out of rhythm. Resigned that a Personal Best is not in store, I still push limits of heart rate and oxygen deficit. What the Hell, it's a beautiful day for exorcising demons and rebooting a dour mood.

With sweat-stung eyes, I take a blurred peek at my time at the junction of Oak Creek and Old Twin Peaks trail: 51 minutes and change. Not bad: only a few seconds off my Personal Best Pace. But that was eight long years ago when in training for the Imogene Pass Run. I'm reminded that from ages 16 to as much as 60, eight years is not really significant. But eight years beyond age 60, well, it equates to 25 years in midlife. My PB time to Twin Peaks is one hour, 39 minutes, and 50 seconds...something, given my age, that was unlikely to be repeated, let alone bettered. Over the past few years Father Time takes his toll, as subsequent timed ascents slowed by to around an hour and 50 minutes. Oh well. Life is still good in Lovely Ouray...at any speed. I'll just have to learn to live with a few extra demons.

Above the bench, Twin Peaks Trail deteriorates and steepens. I'm slowed to a power-hike pace, grabbing at tree limbs and oak brush for assistance. Sopping with perspiration, I finally make the saddle between Little Sister's monolith and Twin Peaks: One hour, 30 minutes and 10 seconds. For some reason (lack of Oxygen?) it doesn't register that I'm on pace for a possible PB. Disappointed, but not surprised, I turn to face the last ridge run up to Twin Peaks...a marbly slope every bit as slippery as Old Twin Peaks Trail in the Couloir from Hell. Searching for traction, I dance out onto grass and tundra. Suddenly, my time to the saddle sinks in: Hey, an hour and 30 to the saddle? OMG! I have a shot at a PB after all. Unfortunately, the last leg is a spirit breaker; I've never made that section in less than ten minutes, eleven once maybe, but never ten.

And neither did I on this day. I hit the stopwatch at the base of Twin Peaks (the remaining scramble to the summit is sketchy and no place to be in a hurry): One hour, 40 minutes and 55 seconds...one minute off my Personal Best eight long years ago! 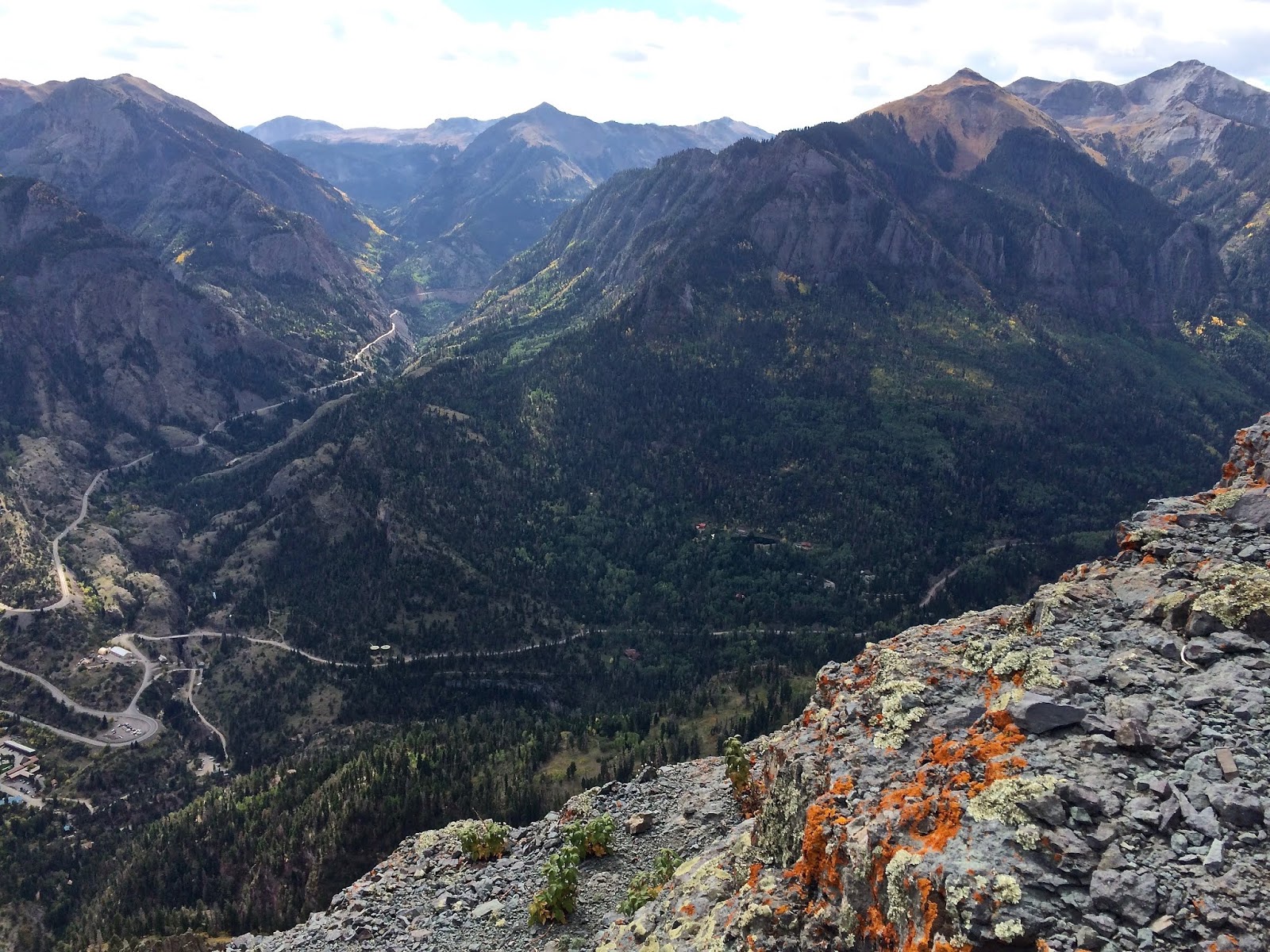 After catching my breath I scramble the last 50 yards up to a lonely summit and Gaze off boot tips at Autumn's glory and Lovely Ouray. I am pleased to have the summit to myself. On shaky legs I stoop and scoot to cliff's edge, absorbing the feeling of accomplishment and the view of Lovely Ouray.

Light dances between cloud-shadows that roll over mountain and valley. I'm thankful to live close to trailheads that can carry me to places far and away from the world's madness. 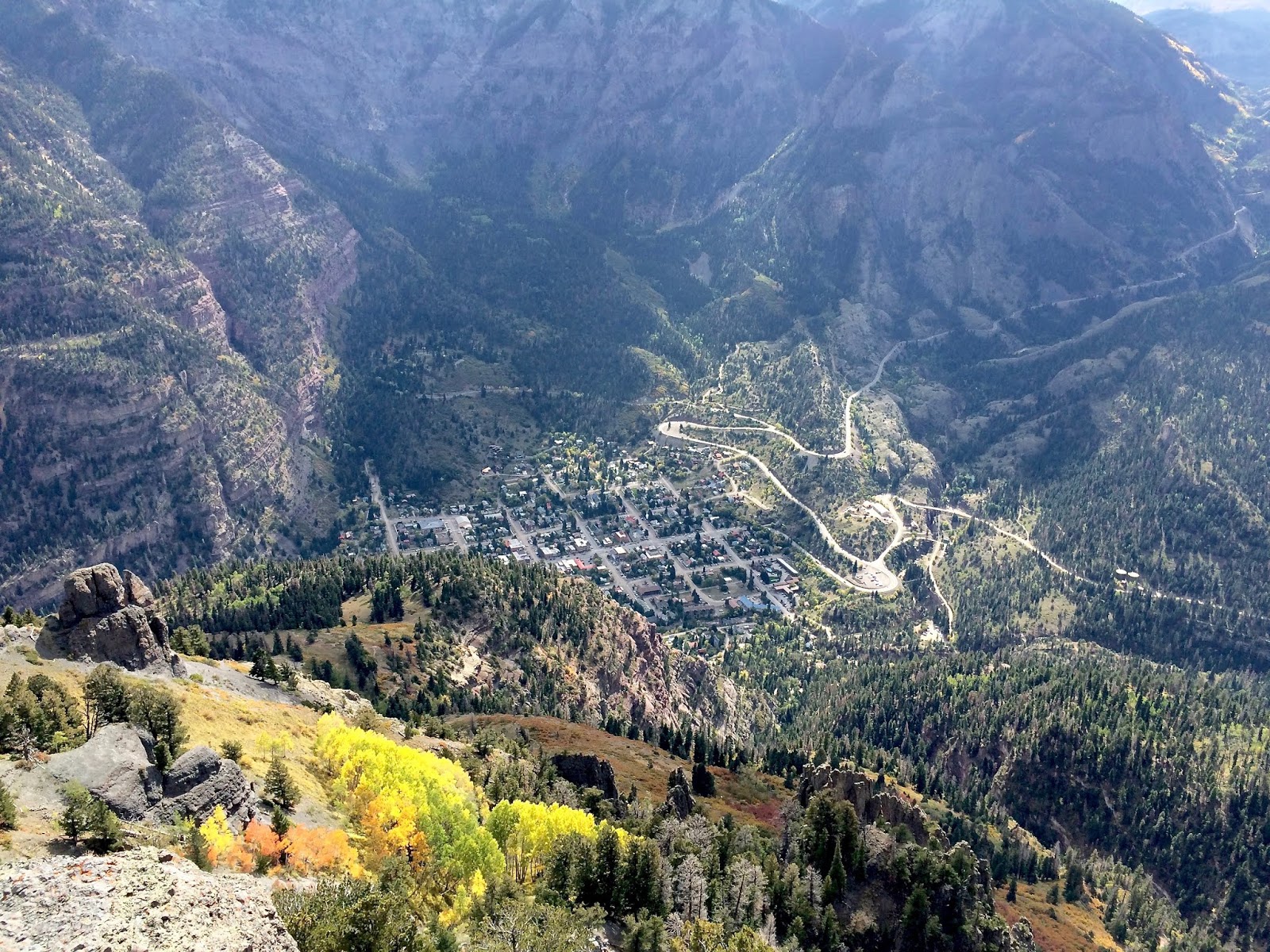 Not wanting to face Old Twin Peak's Trail on shaky legs, I take the long way back via Oak Creek Trail. It's after 2 PM by the time I reach our driveway so Bobbie's at work. I plop down in my easy chair to rehydrate. There, on the hearth next to me, is a York Peppermint Pattie and a note... 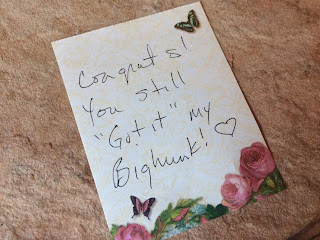 As seen from the summit 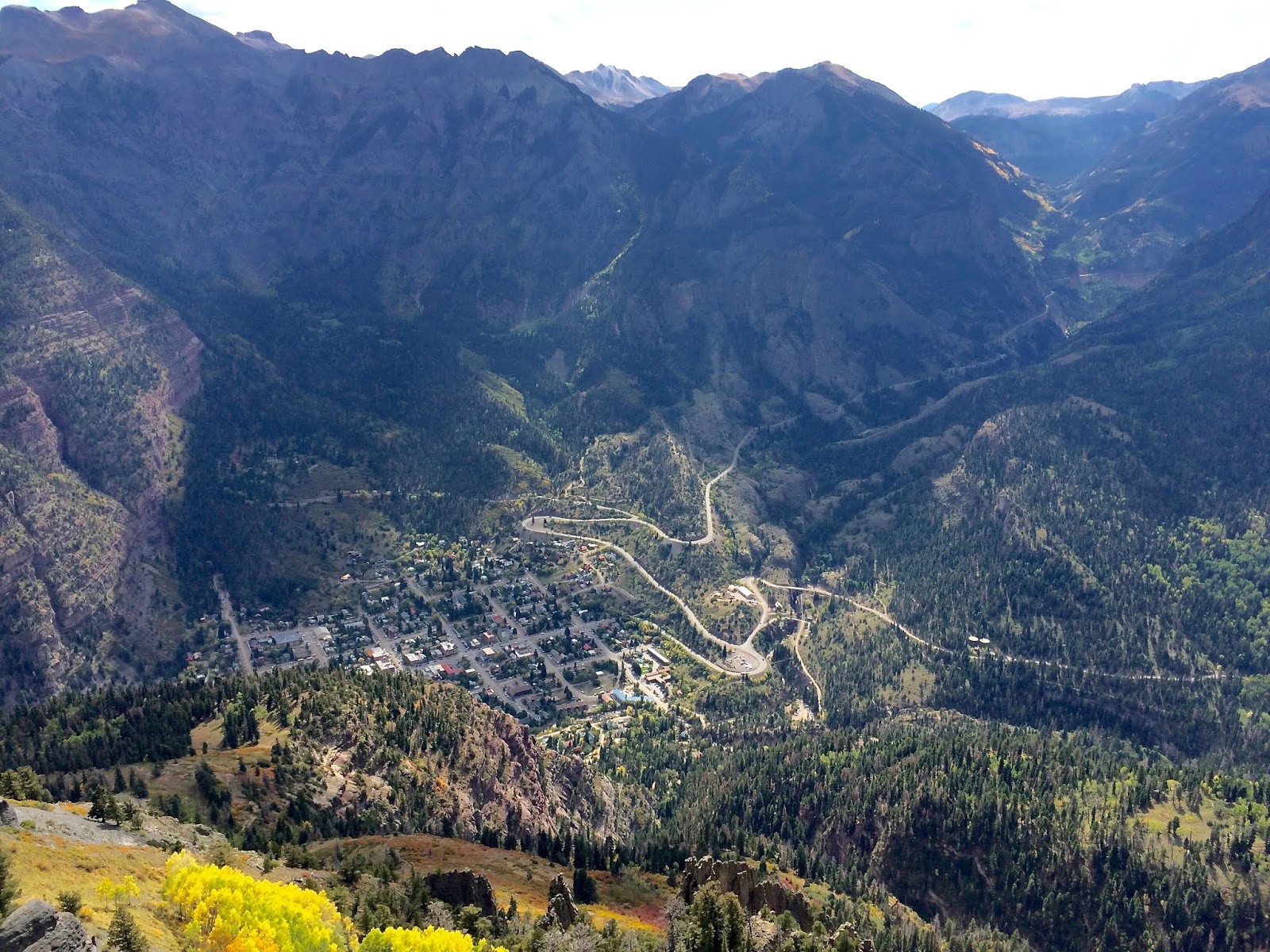 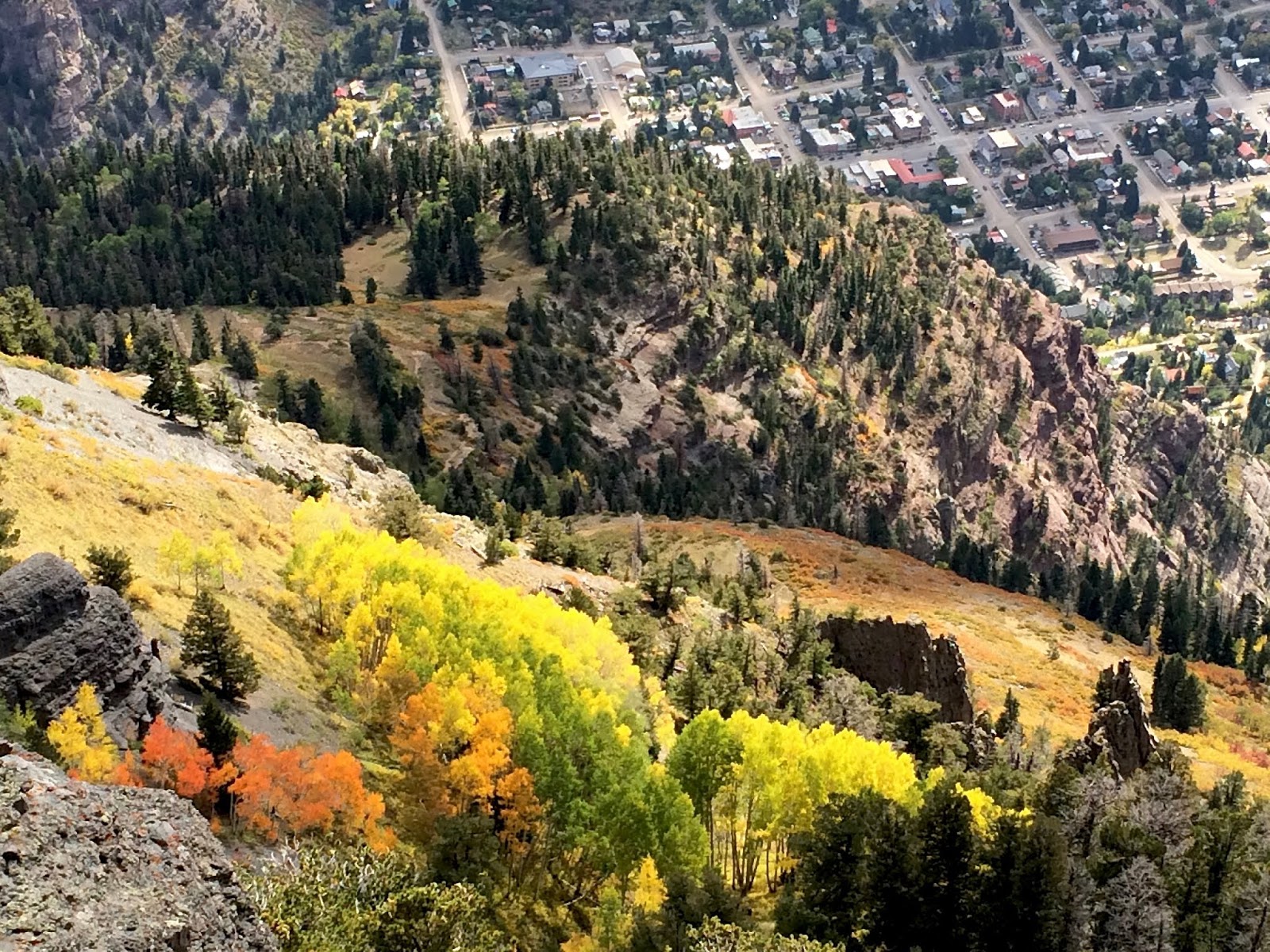 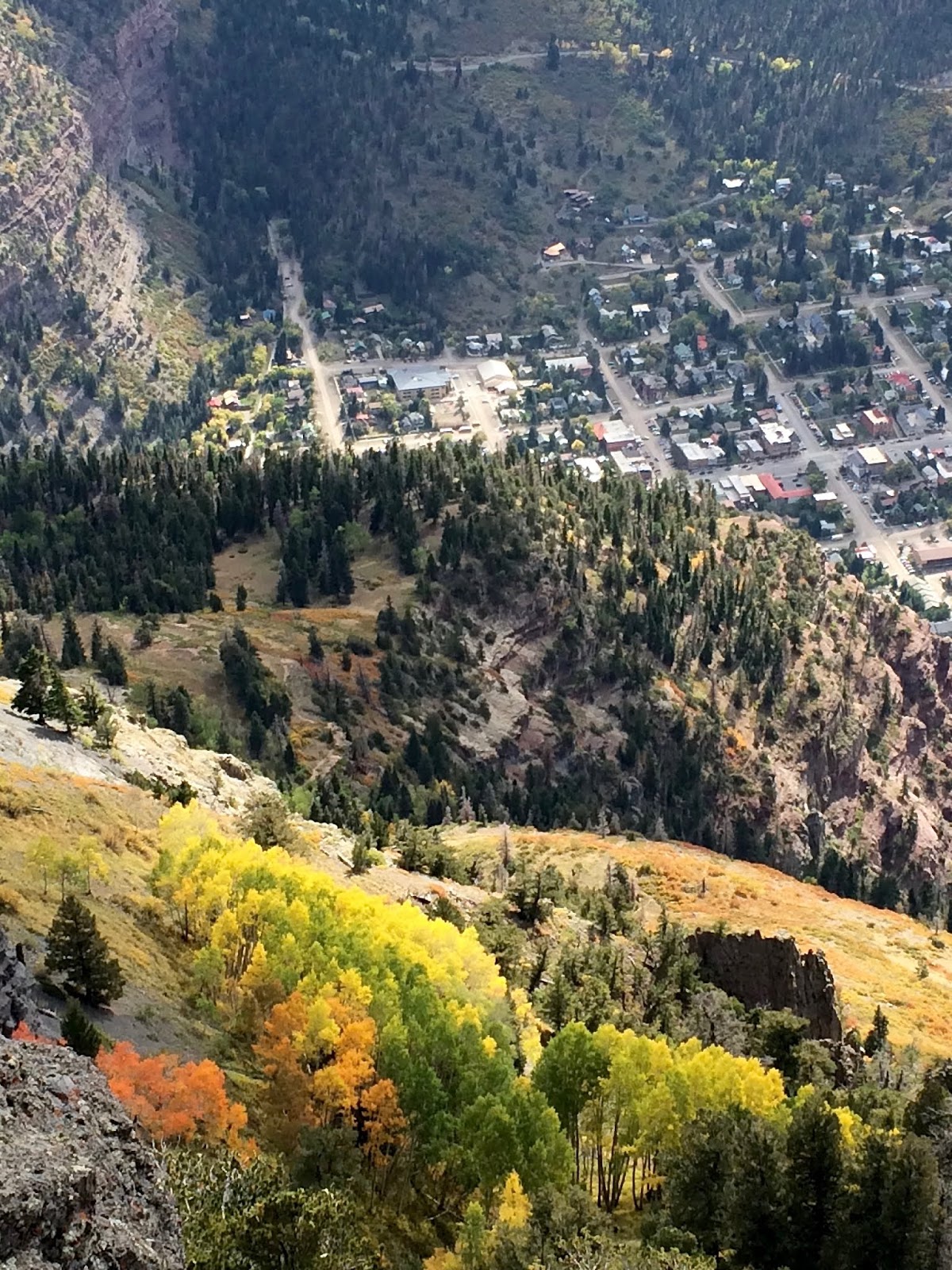 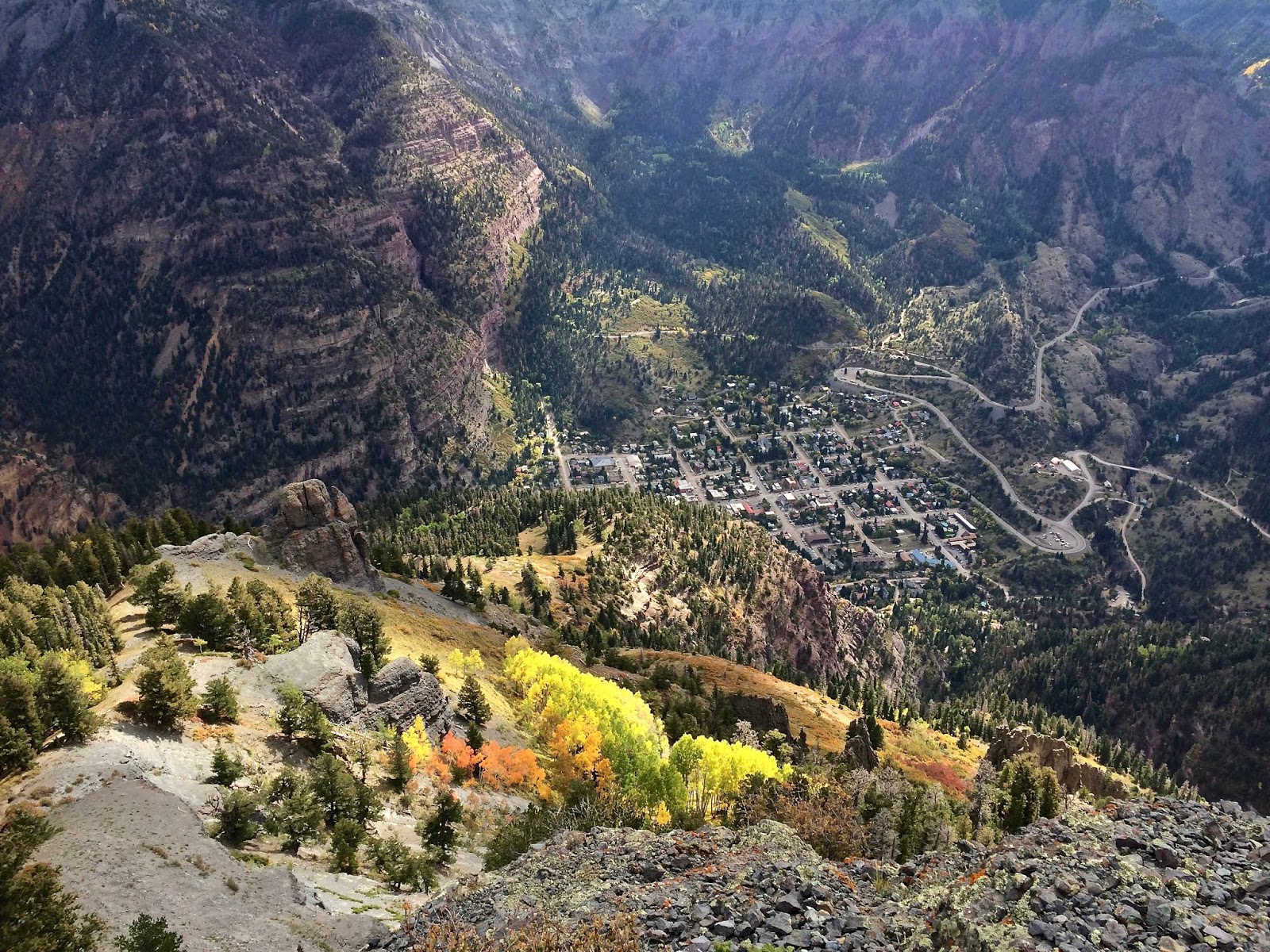 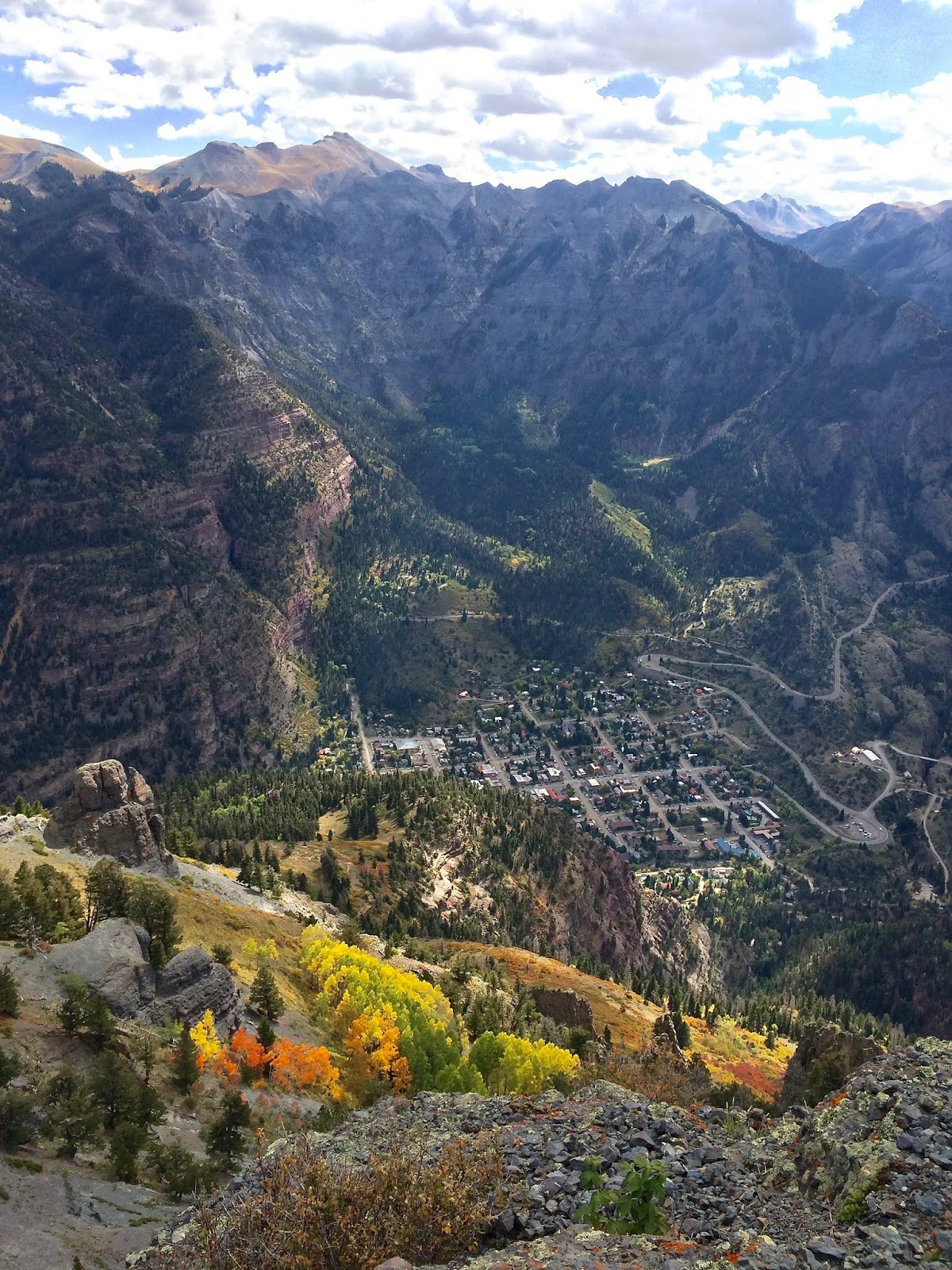 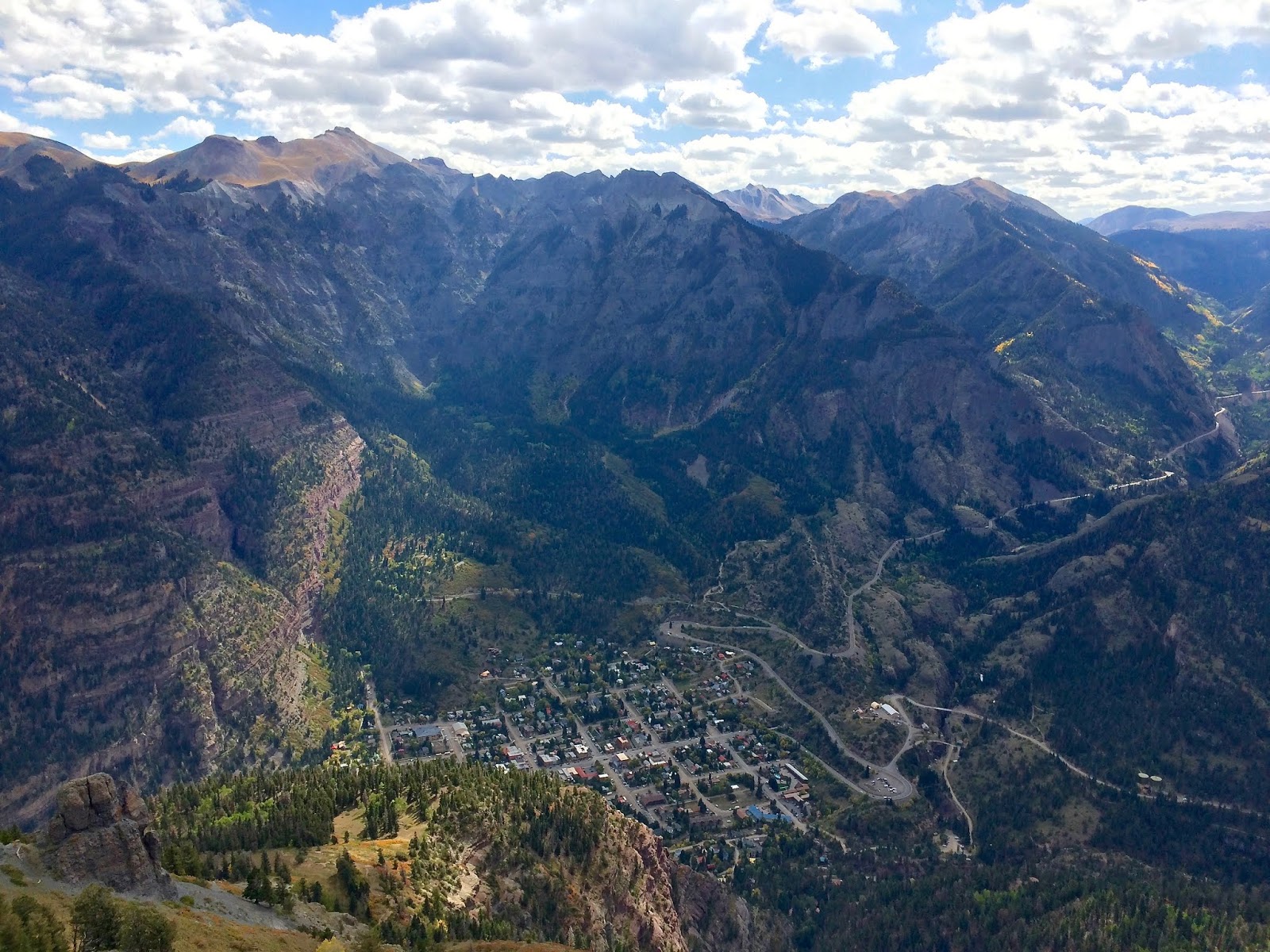 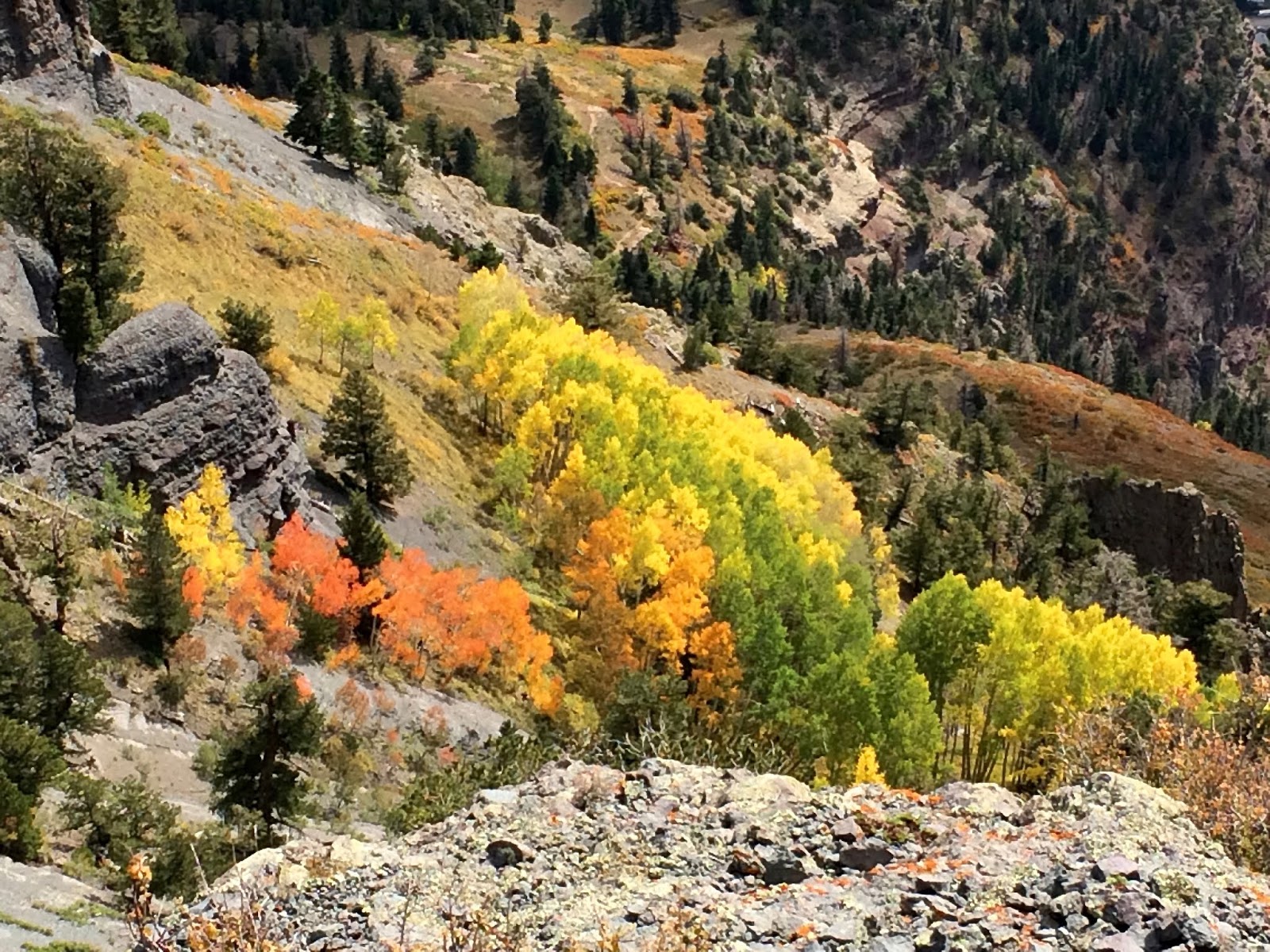 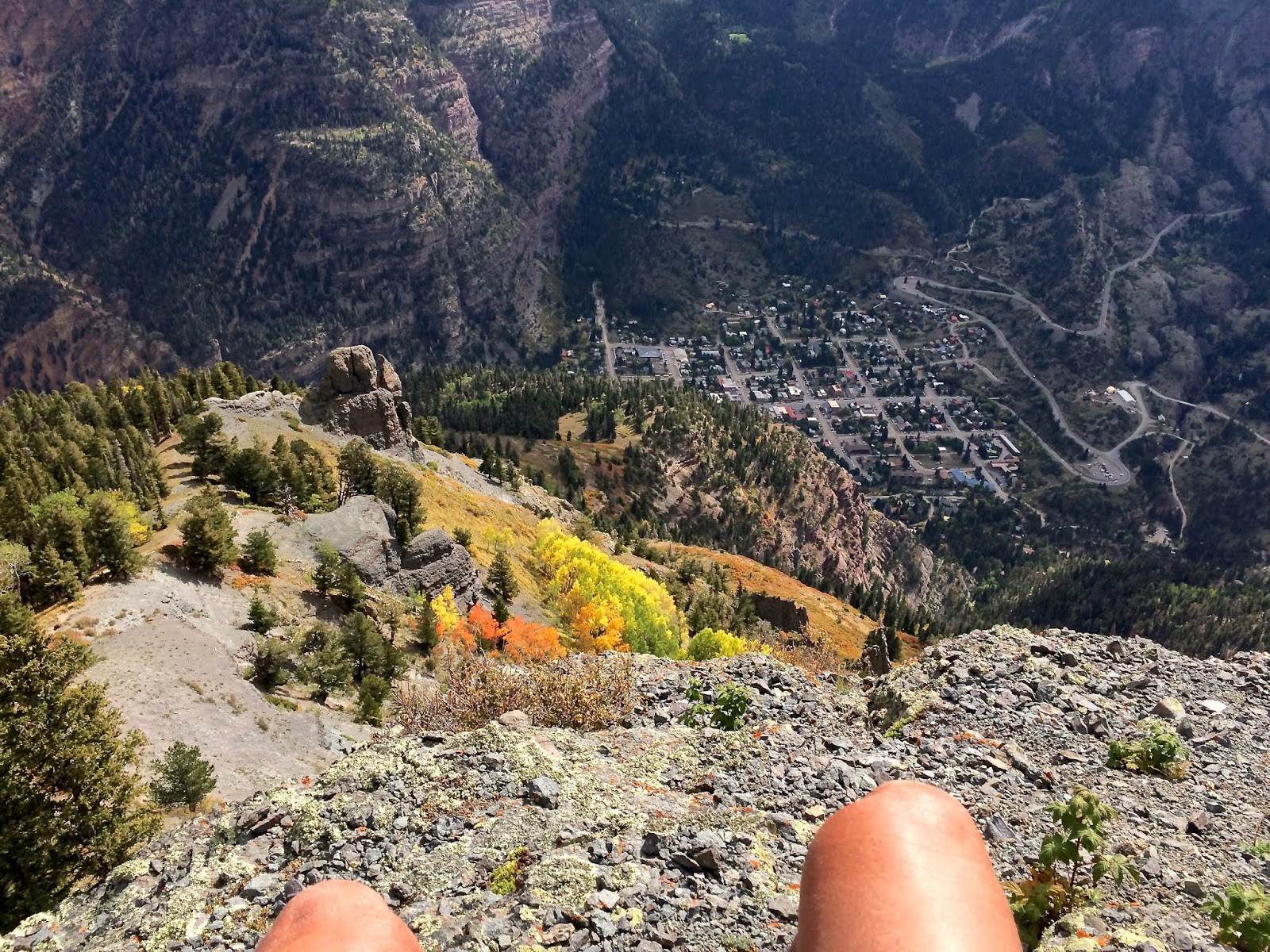 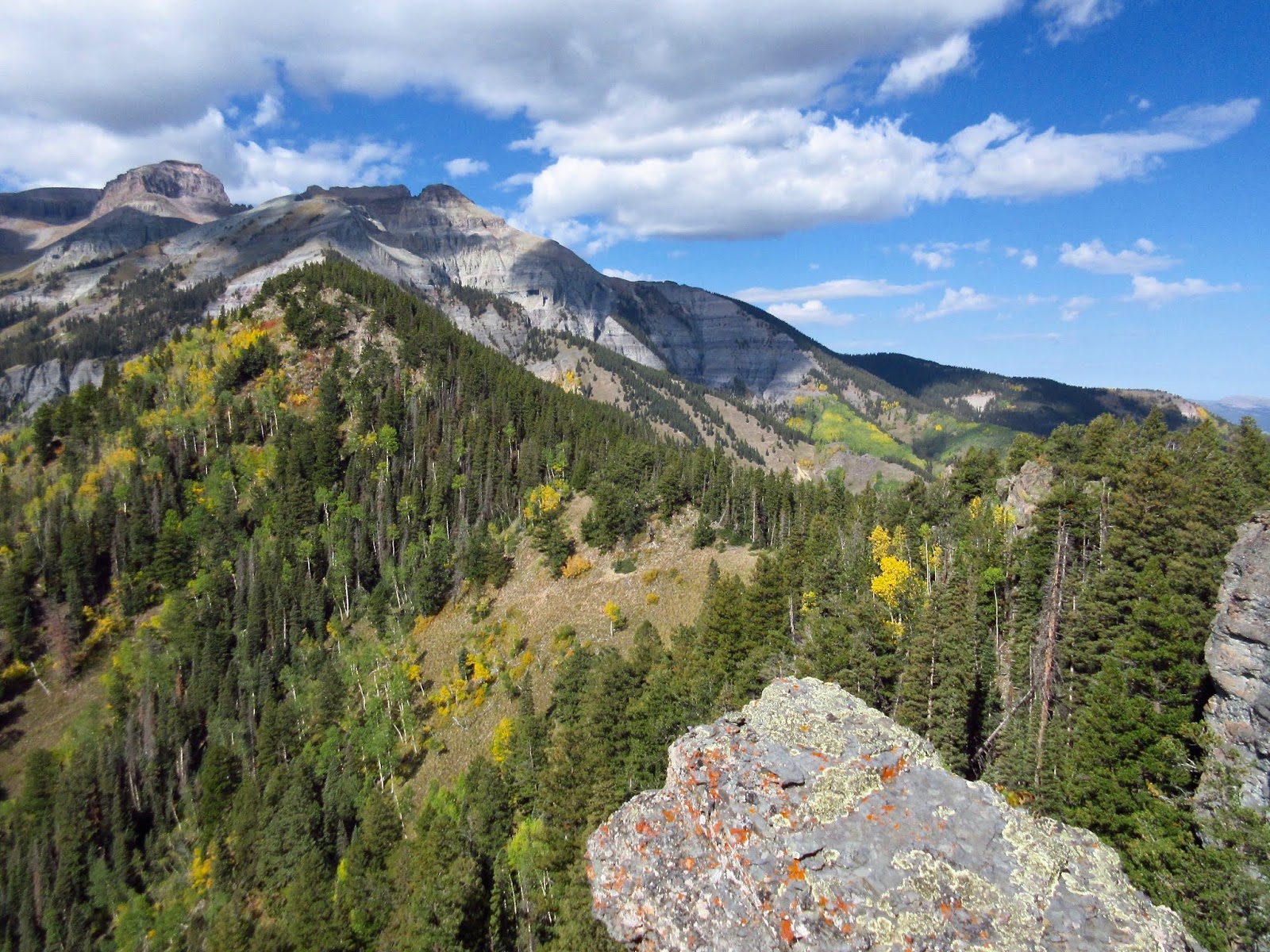 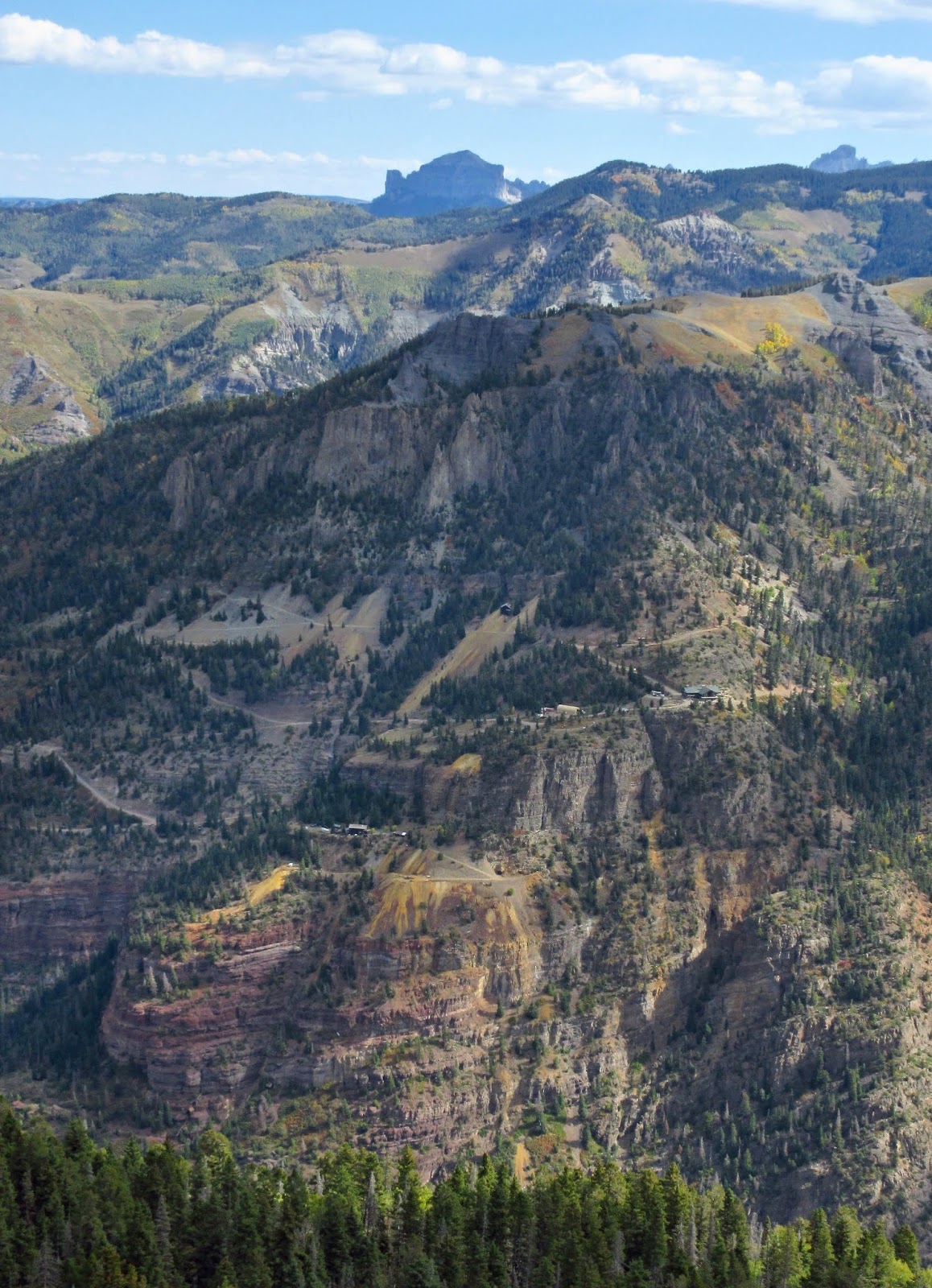 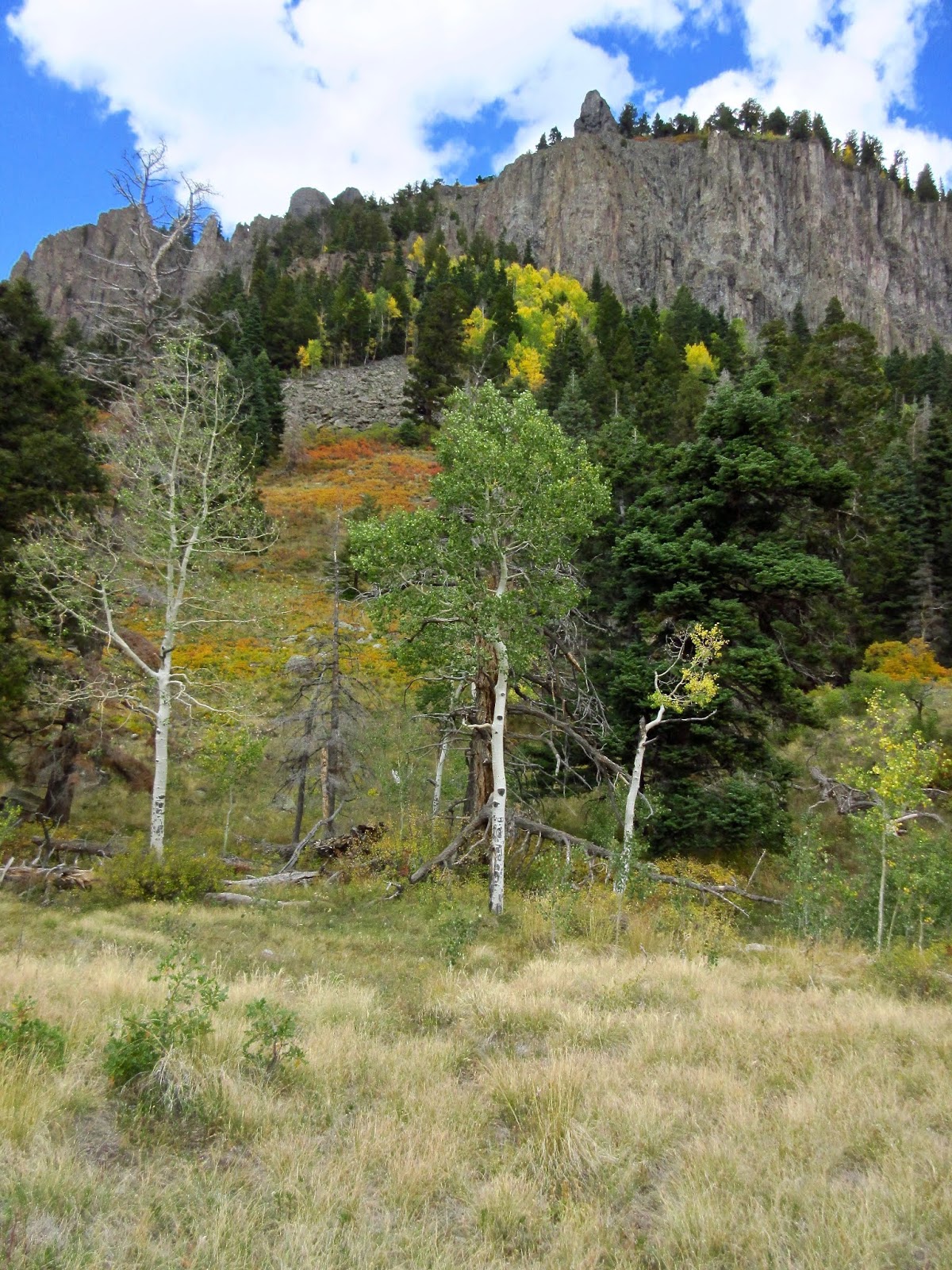 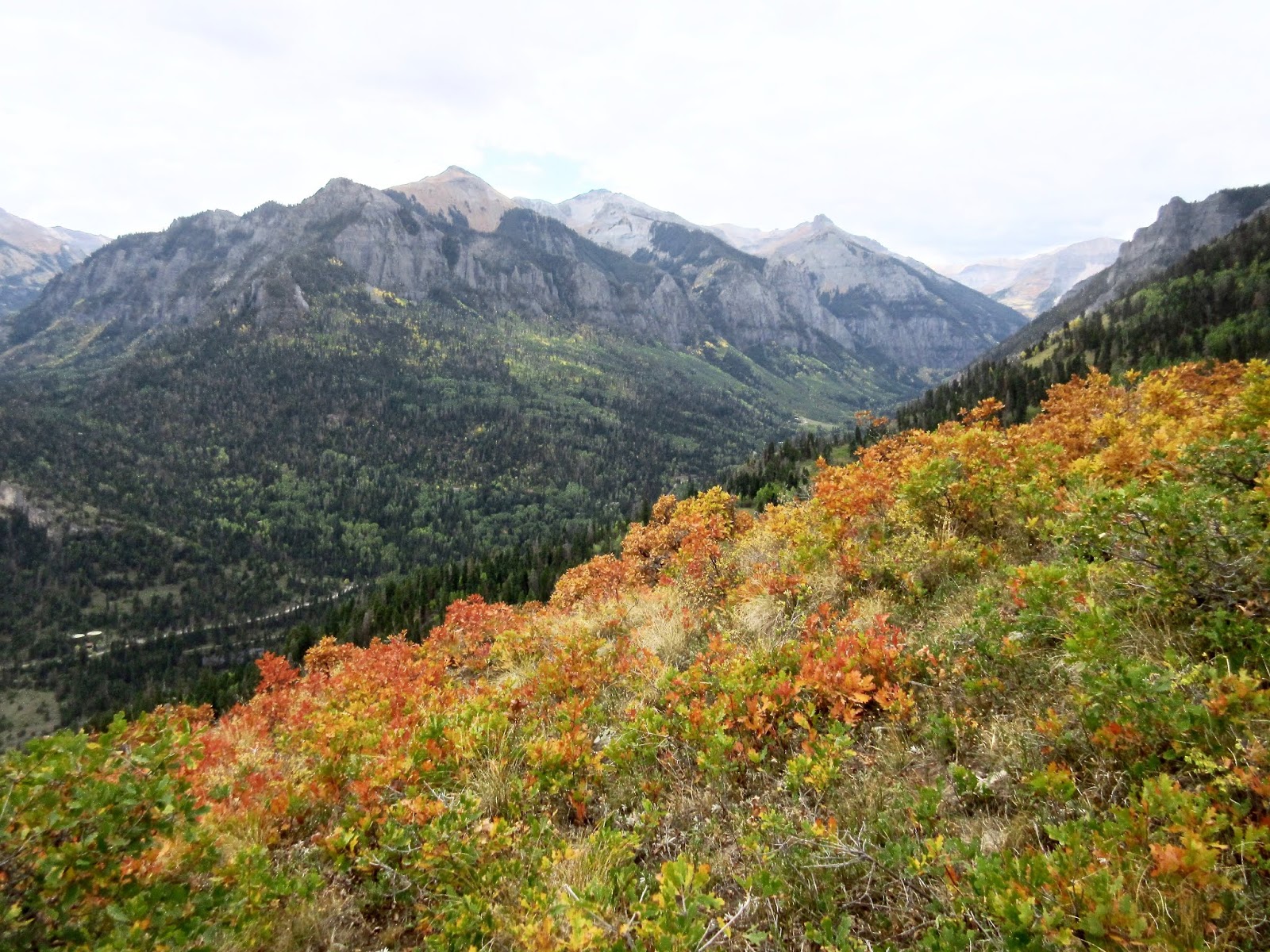 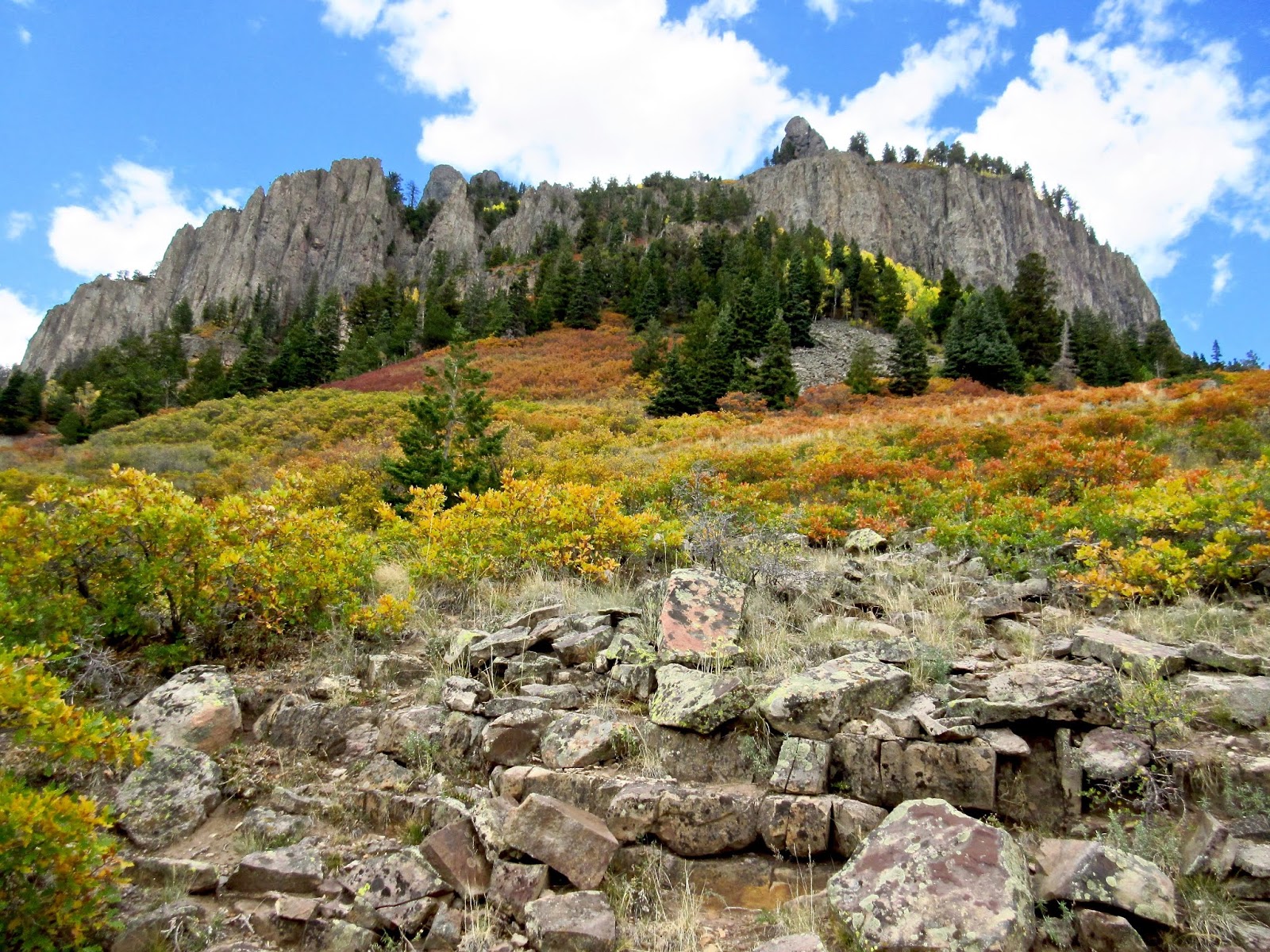 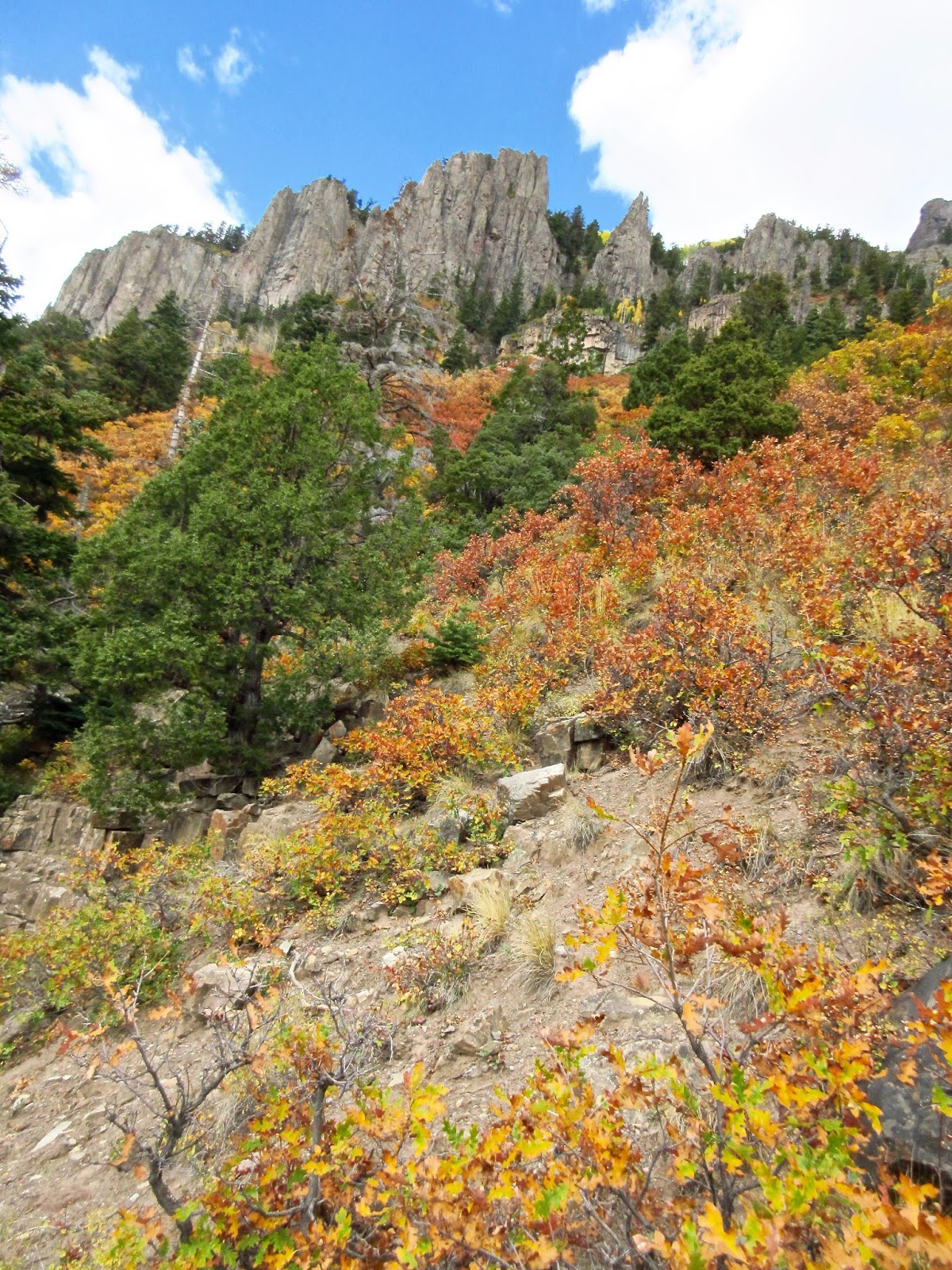 Wilderness: An escape in which the vexed inner self dissolves into a serene outer reality.

Life is good in Lovely Ouray...enough to hold my interest and keep me pushing.

Posted by Box Canyon Blog.com at 8:59 AM