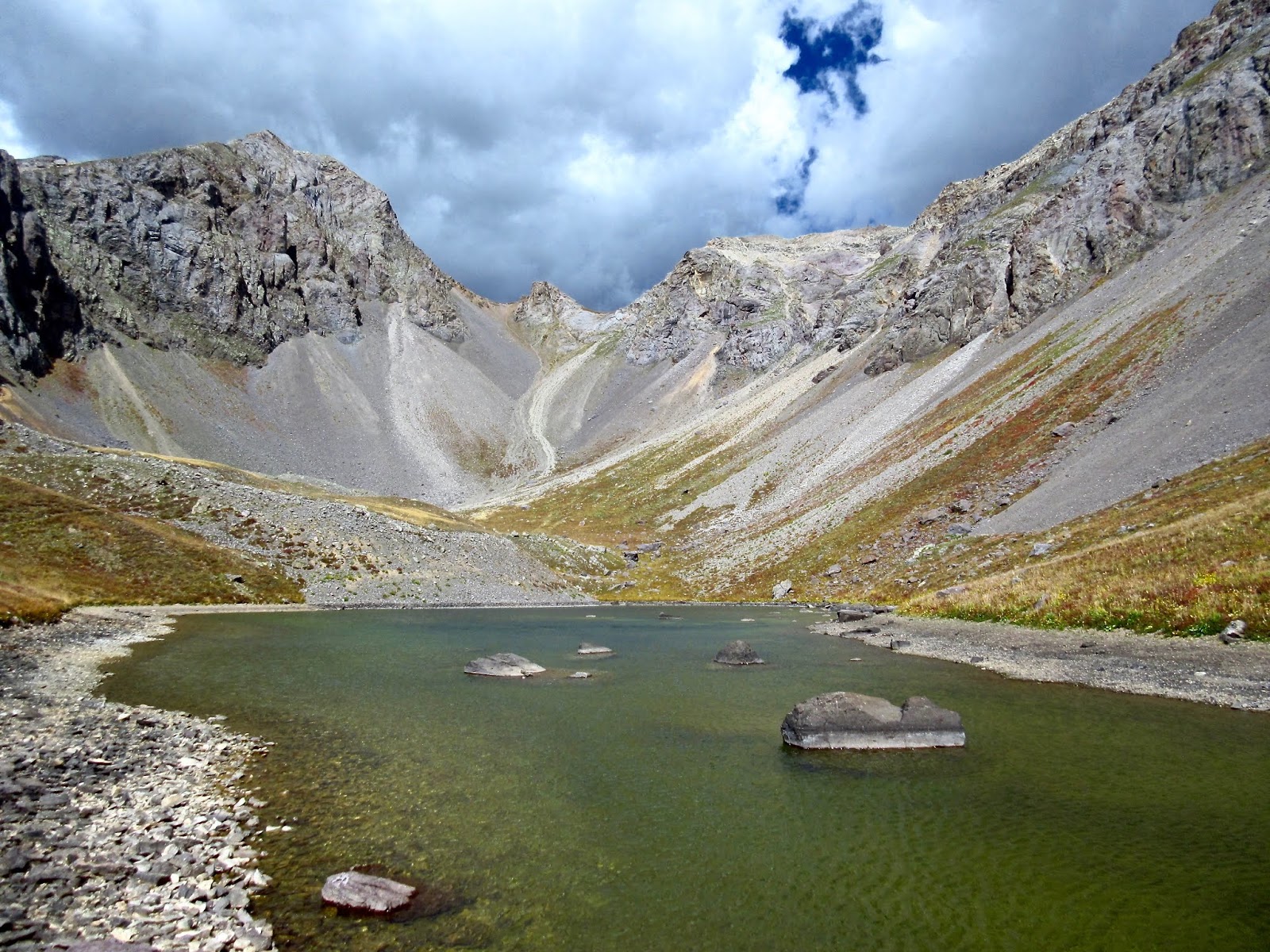 "Remind me to get my depth perception checked," I said to Bobbie, who either couldn't hear me over her grunts and groans and heavy breathing, or couldn't care less about anything I had to say while battling a ridiculous slope of slip-slide talus.


I truly believe depth perception is flattened at altitude. If I had a nickel for every time I've been wrong after uttering, "Oh that's doable," I'd have a second home on the beach in Kawaii.

The scree reminded me of the time we tried to climb the tallest dune in Great Sand Dunes National Park, at the base of the Sange De Cristo Mountains. It didn't appear that far away and it didn't look particularly steep, so we went for it. It's difficult enough to run on a level beach of sand, let alone at a 45+ degree angle where the product of five steps forward, be it soft sand or mushy scree, yields a mere six inches of progress. 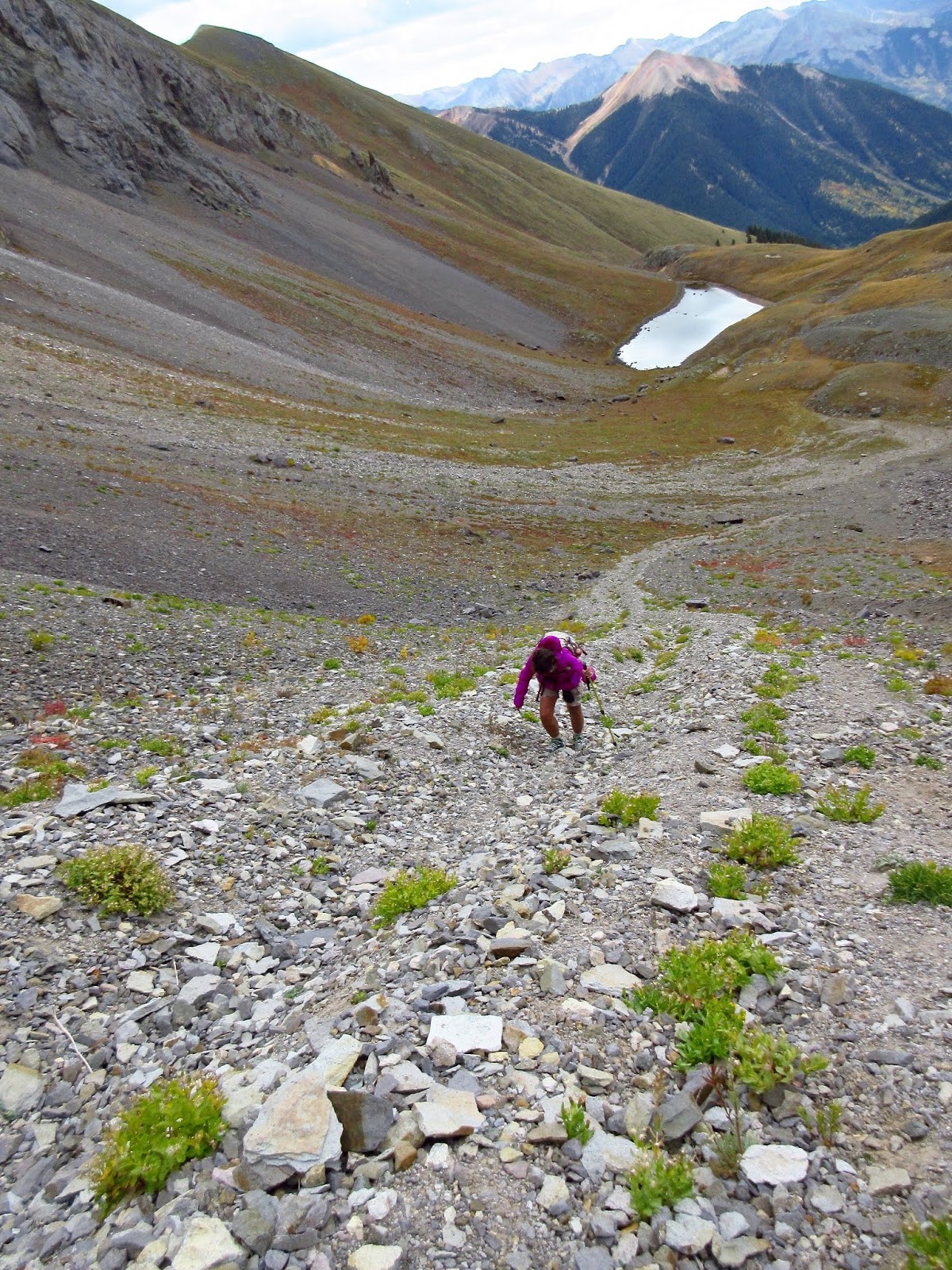 We got sucked into the gentle incline and solid footing on the initial slope above the lake. About halfway up, however, the good footing turned to mush, and the gradient was becoming more like the ever-steepening upslope side of a parabola. It didn't take long till our feet felt like they weighed a hundred pounds, and we were dragging them up a ladder.

Progress was more theoretical than real. I feared Bobbie would run short on motivation without some sort of Pavlovian reinforcement.
"You want a Shot-Bloc?"
"No."
"Gatorade?"
"No."
"We're almost there (a lie)."
"Columbine Lake better be on the other side of that saddle because this is ridiculous. I mean, how are we going to get down this shit?"
"No worries. Going down will be a piece of cake."

About that time our mushy scree turned to marbles on hard-pack.  Achilles were stretched painfully beyond limits, arches cramped from toes trying to find purchase through thick Vibram soles, and fingers and knees bled from six-point efforts. 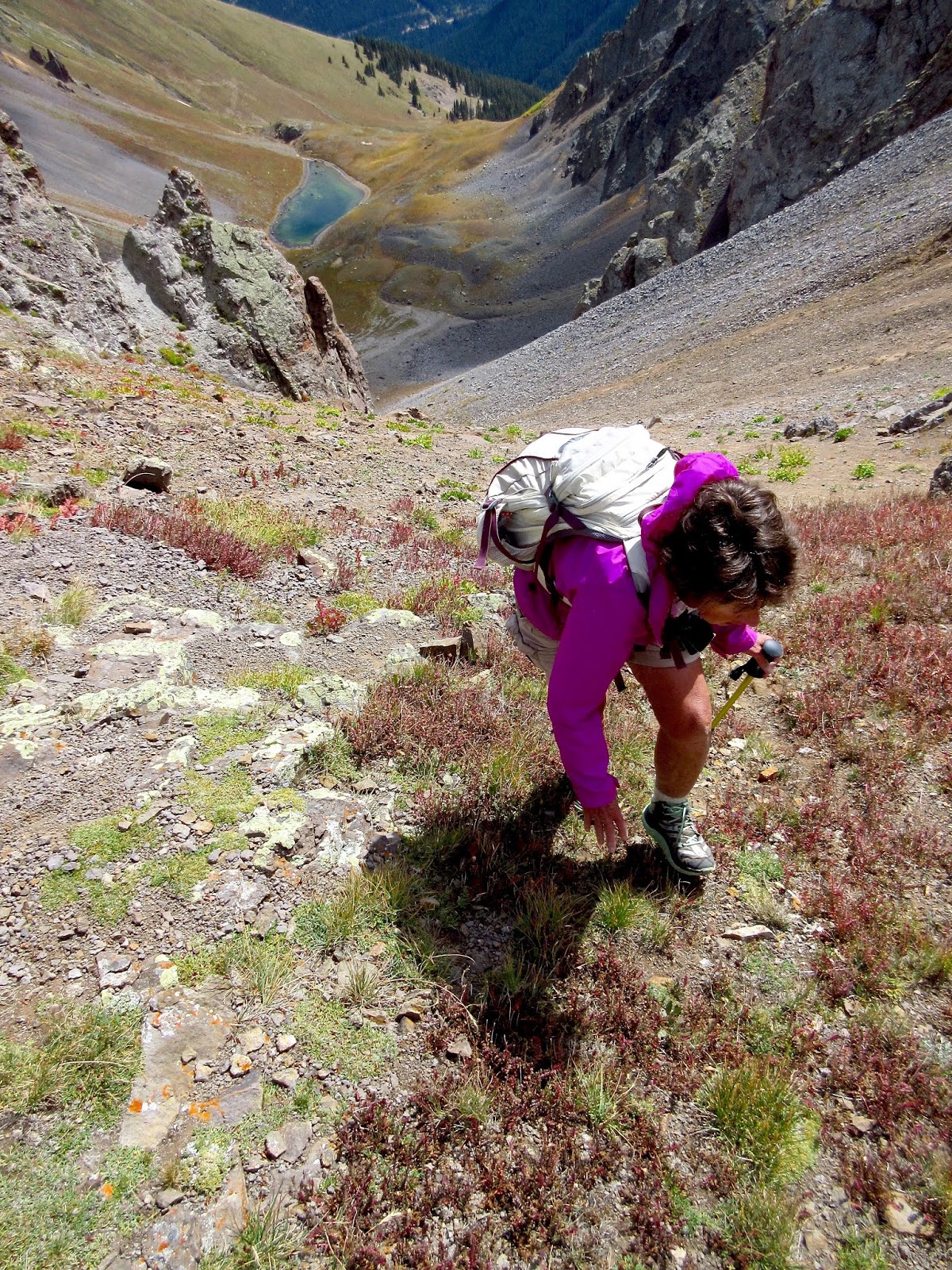 The gods finally took pity on us as we neared the saddle, where we found scant vegetation, almost enough to stand upright.

Then This! Our well-earned just reward! 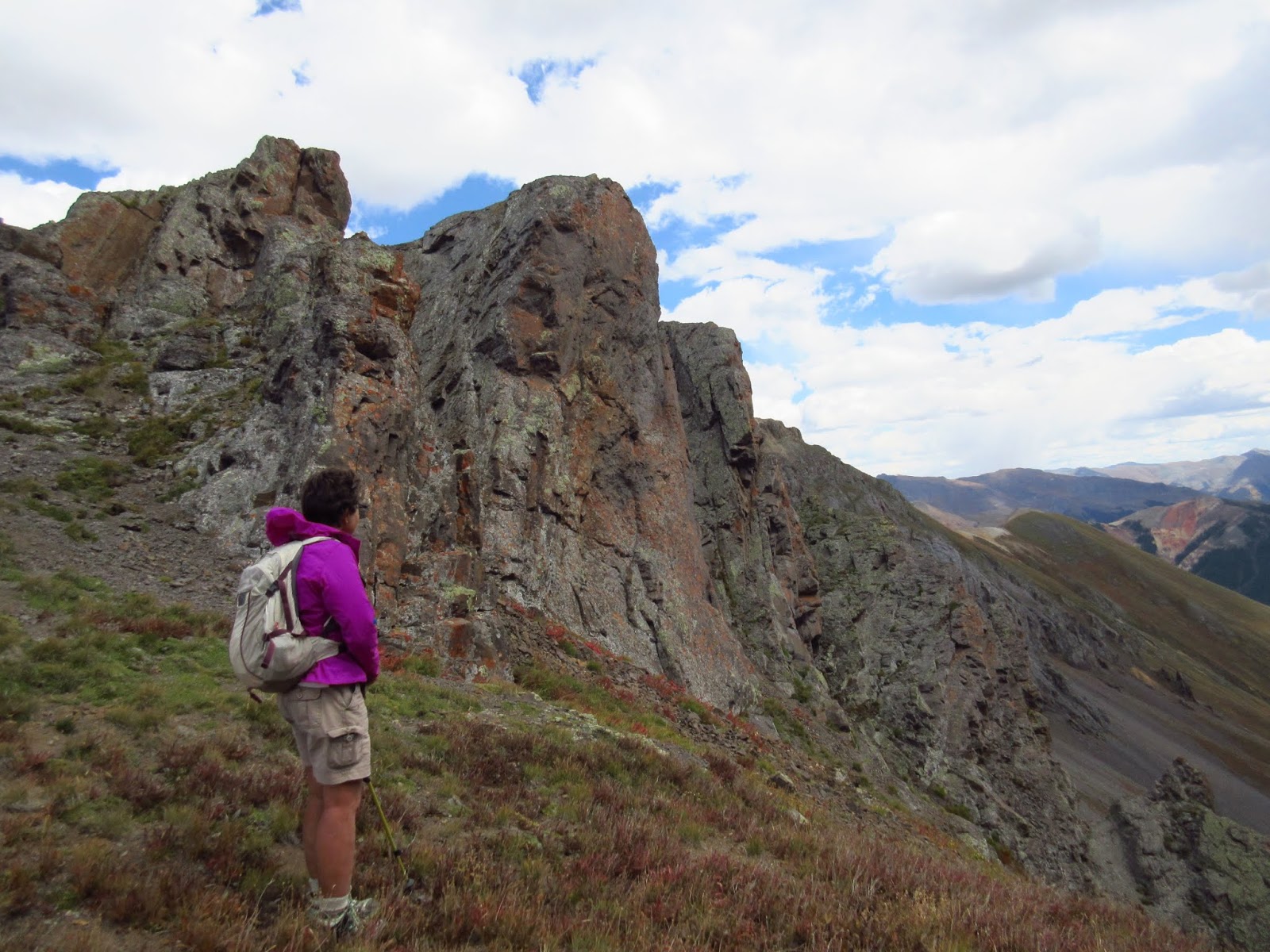 Bobbie is dubious about the "piece of cake" decent. 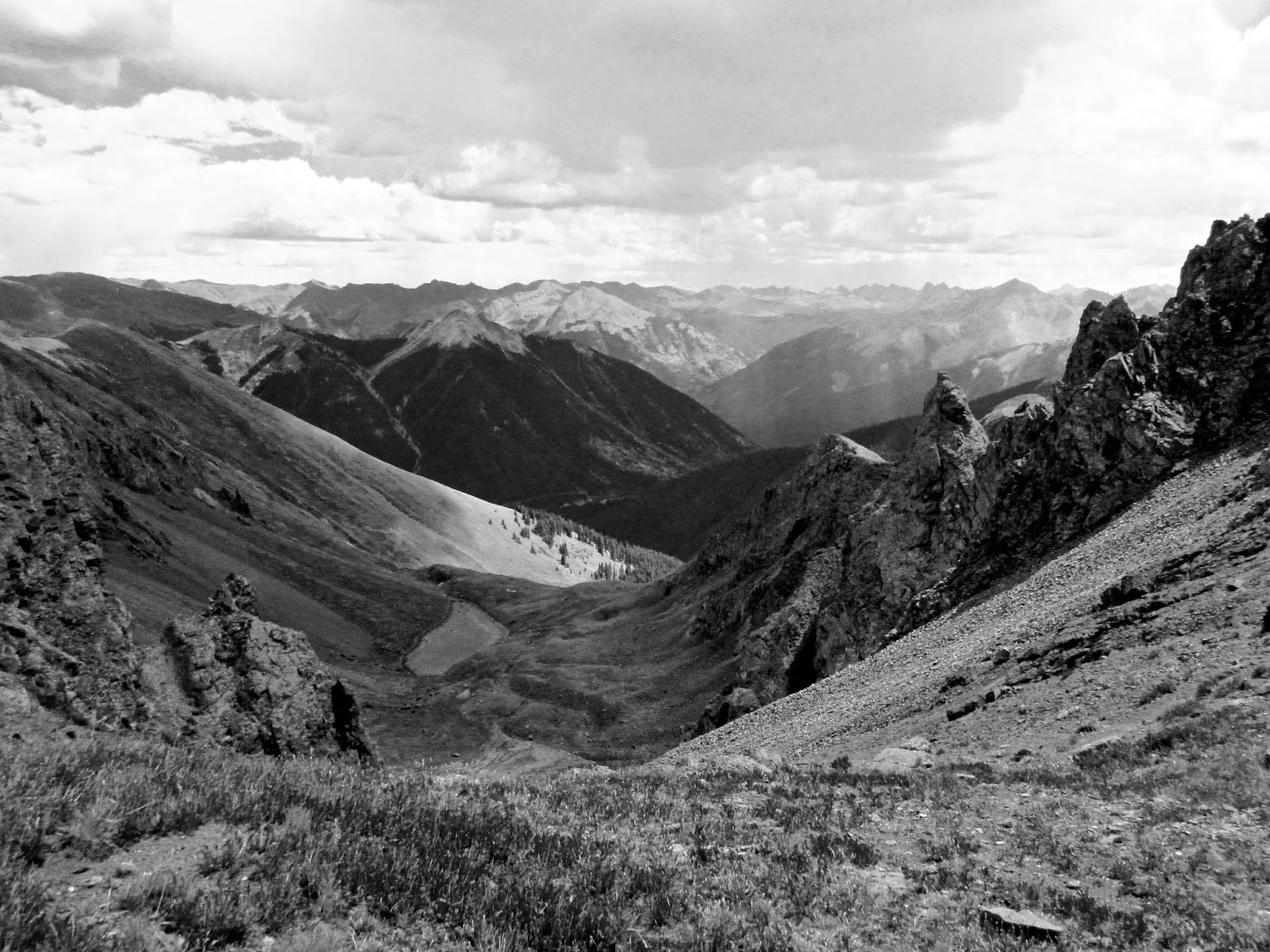 Once off the marbled hard-pack, soft, mushy scree morphed from foe to friend. We pumped our legs in half-glacade form in what I considered "piece of cake" form. Unfortunately, it was short-lived. 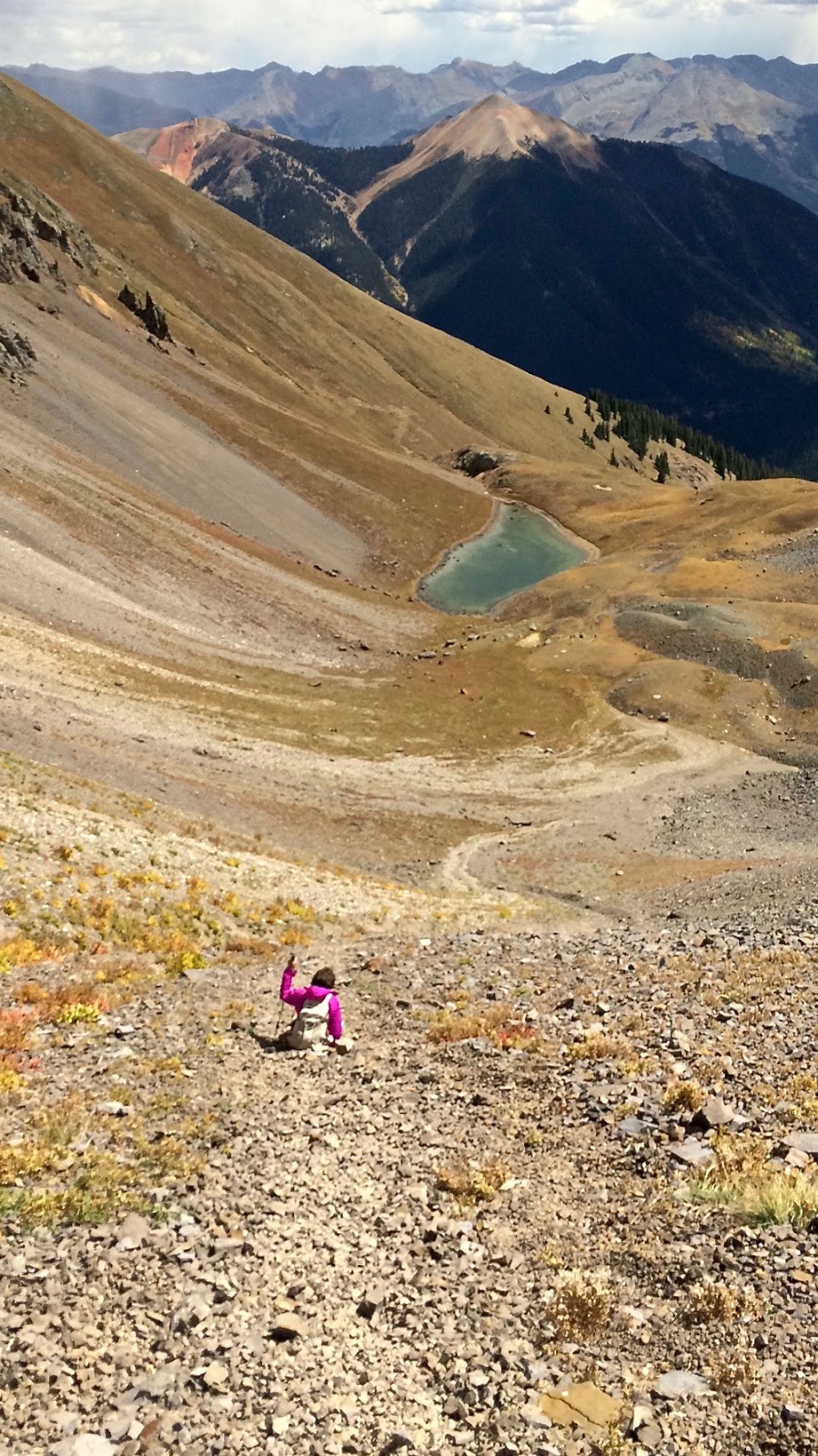 Note the massive runoff trench snaking down slope in the above photo. About a hundred yards beyond Bobbie's position—enervated from slip-sliding and crashing—she butt-rode an out of control wave of scree, one that slowly directed her toward the steep-sided trench.

Suddenly, I heard an "Oh Shit" squeal...turned around just in time to see Bobbie's feet pointed toward the sky. I'll never forget it, she was totally airborne, upside-down...crashing headfirst into that rocky trench. I was below her, riding my own wave of scree. I shouted, "Are you okay?"
"Bobbie. Are you okay?" 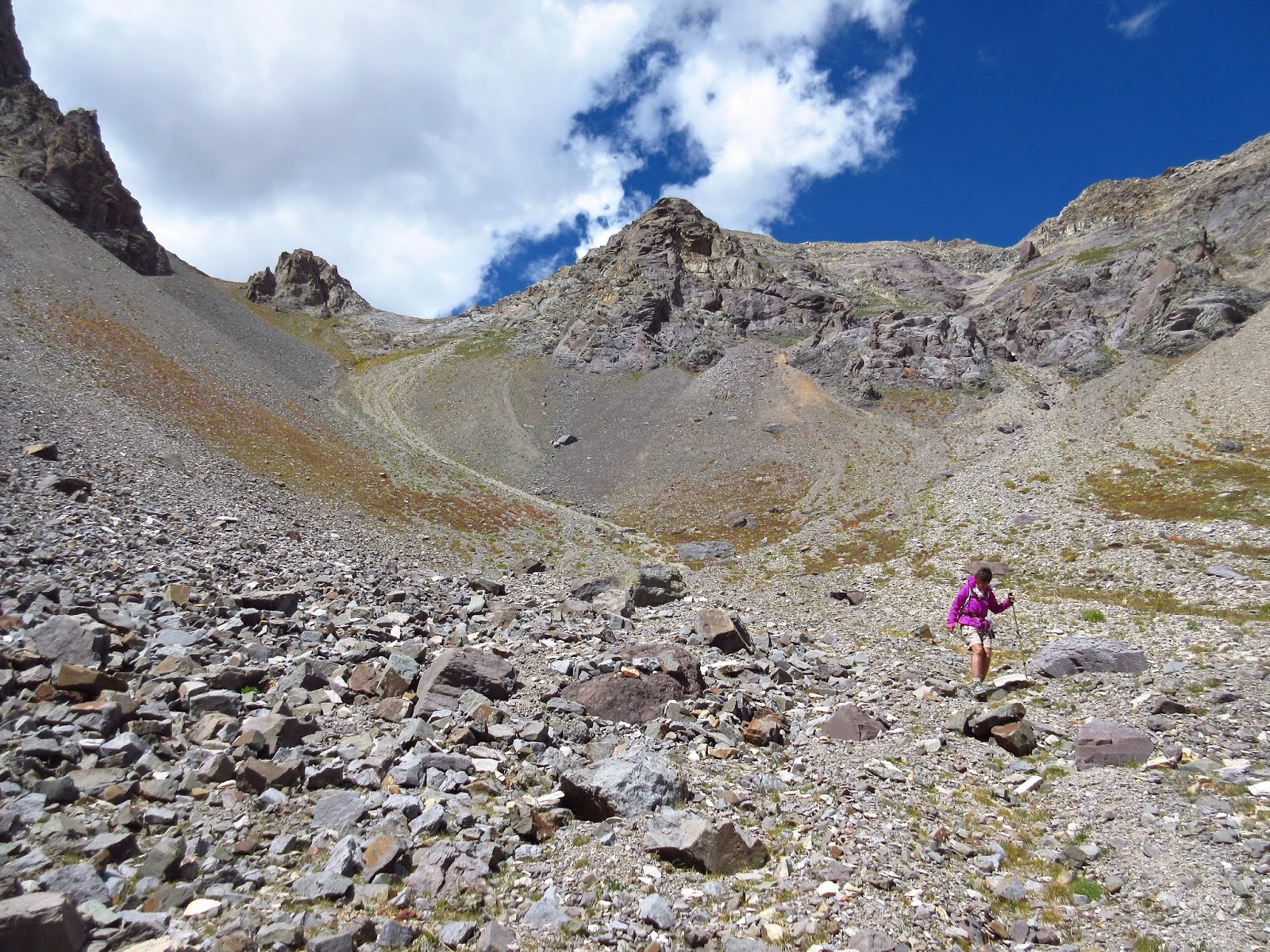 Other than a large raw scrape on her upper thigh, Bobbie was no worse for the fall...remarkable considering she landed headfirst. Once down to friendly tundra, she cleaned the dirt and blood from her wound with "Wet Ones." 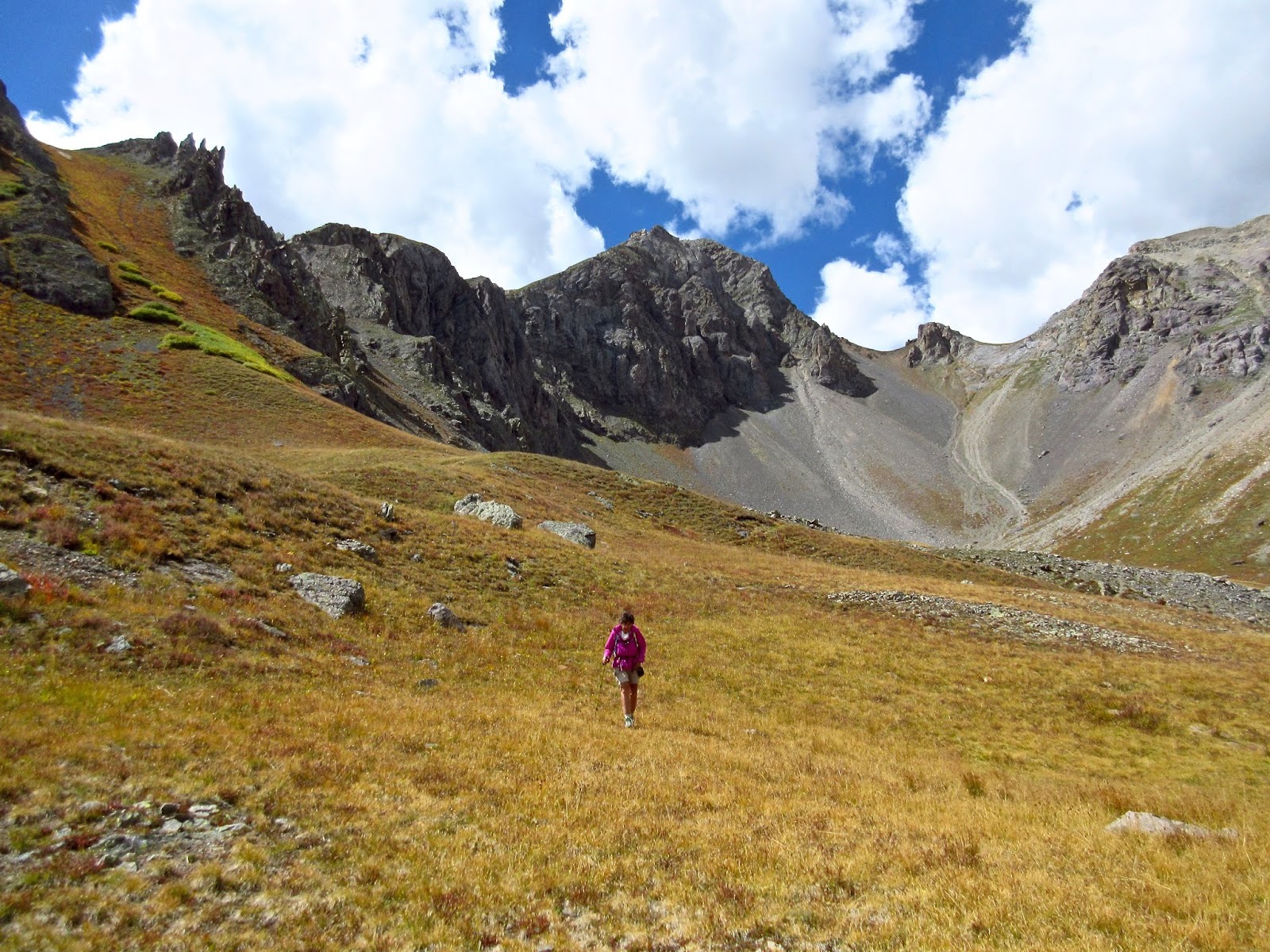 Just another day in the mountains, beyond trail's end, "connecting dots."
Peace out,
mark and bobbie.

Posted by Box Canyon Blog.com at 8:48 AM