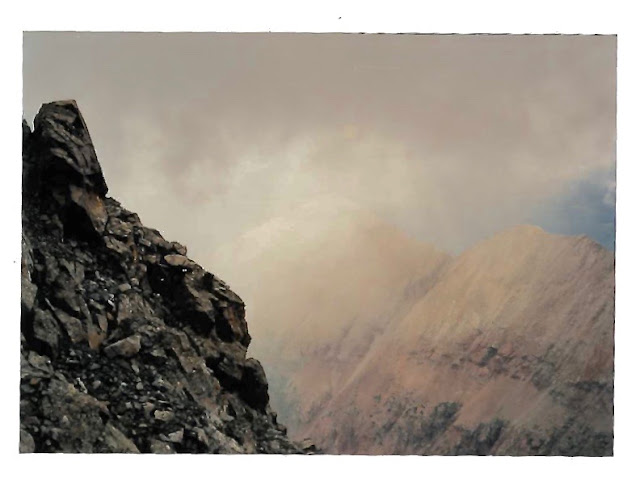 There was no turning back. Gasping for breath, lost in a surreal swirl of clouds that spawned flashes of lightning and chest-rattling thunder, we'd come too far, worked too hard, and suffered the worst in an attempt to claim El Diente's summit.

It was late summer 1991, nearly a decade after a fortunate stroke of Fate crossed the paths of two mountain loving soul mates. To this day it mystifies, how a single chance meeting evolved into a life-altering, metamorphic change in the course our lives. Thus, Bobbie and I found ourselves hard at work on fulfilling a wild haired dream, a first-date pledge to summit all 54 of Colorado's 14,000 foot peaks...together.

With a couple dozen 14ers under our belts, we felt the time was ripe to take on El Diente (“the tooth”), an intimidating mountain set miles deep within the Lizard Head Wilderness. This 14,159 foot wrinkle in the earth's crust had been described to us as "abrupt and unstable,” with a couple Class 3 to 4 moves to boot. But we were young and strong and beautiful…and regrettably naive. How better to undertake a challenge than on blind faith?

Greek fabulist, Aesop, is generally credited with the quote, "A man is known by the company he keeps." It's been our experience that the same is true for mountains. Pardon the "gang" metaphor, but, as with members of the "Crips" and "Bloods," El Diente hangs with rough company in a tough neighborhood: Wilson Peak, at 14,017 feet; Gladstone, at 13,913 feet; Mount Wilson, at 14,246 feet—all (excepting non-14er Gladstone) generally rated in the top 15 in "difficulty."

We were well prepared fitness wise, what with Bobbie always in training for various marathons throughout the southwest. And while I didn't share her passion for 26 miles of pounding pavement, I delighted in our timberline trail running adventures. I believe long distance trail running at altitude prepared us both physically and mentally for climbing 14ers, as well as mountain races like Silverton's Kendall, Ouray to Telluride's Imogene, Manitou Spring's Pikes Peak marathon, and Telluride's brutal, unsupported—now discontinued—Highline Trail.

Having already climbed Wilson Peak in a tempestuous storm, and El Diente's airy neighbor, Mount Wilson, we decided to complete the Lizard Head Wilderness trifecta by summiting El Diente, this time approaching from the south on the Navajo Lake Trailhead off Dunton Road.

Arriving late Friday afternoon, Bobbie and I killed time in our camper studying topographic maps, working crossword puzzles, and drinking beer (ok, it was me doing the beer drinking) while waiting for friend, Martha, to arrive (the same "Martha" that joined us on on our recent hike from Bullion King to Columbine Lake). Unsaddled by self-flagellating compulsions to bag 14ers, Martha set her sites Navajo Lake and a picnic by the shore.

We stumbled out of camp in dawn’s flickering light, wading a narrow path through overhanging willows and scrub laden with heavy mountain dew. It didn’t take long to soak in and chill, including feet, thanks to the wicking action of cotton socks. Every step came with a "squish" but we sloshed on, climbing from camp’s 9,200 feet to Navajo Lake just above timberline. The lake was situated at the lower end of a long, steep-walled cirque of peaks with boulders and scree trailing down precipitous slopes. Boulder by boulder, Bobbie and I set about solving El Diente's summit route riddle, up ever-steepening, gravitationally charged walls of teetering rock. We learned the hard way not to use them for handholds after one nearly rolled us over.


The going was arduous and slow, progress hard-won. Intermittent bouts of rockfall froze us in our tracks as the mountain weathered away in real-time. Our steps triggered landslides, forcing us to climb side by side in order to stay out of harms way.

Is this the route? we wondered out loud…clinging to steep rotten rock that crumbled and fell away with the slightest disturbance.

That we were over our heads on El Diente is an understatement as large as the mountain itself. Ropes and helmets hung ineffectual, tethered to our packs. We were an accident waiting happen. Half way up the weather began to deteriorate with a near simultaneous flash/boom of lightning and thunder. Bobbie and I exchanged raised eyebrows, wondering if maybe it was time to bag it and live to climb another day, preferably a sunny and warm one.

But I am male. And like most of my gender-mates I don't like to ask for directions, nor turn around when so close to a summit objective. Do we just throw away all our investment? We decided to push on, exhausted from five miles of relentless ascending, oblivious to the old adage that the only successful climb is round trip. Getting to the summit is optional, getting down is mandatory. And we were not prepared to spend the night. 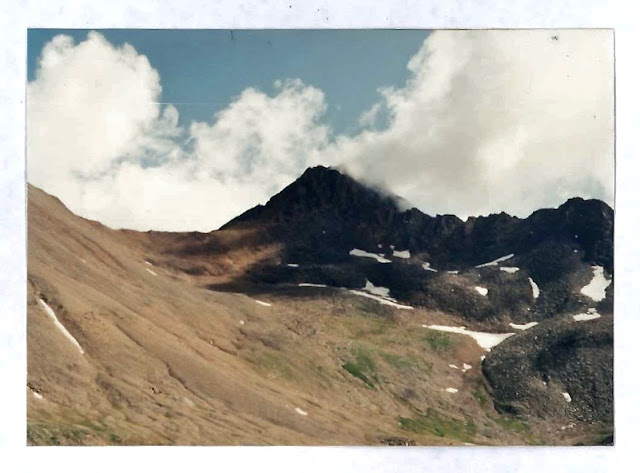 El Diente is a skittish mountain, one with more "variables" than typical 14ers. For one, it can take as long or longer to get down as it takes to summit, mostly due to all the tipsy boulders. I liken mountains like El Diente to childbirth; you must forget the fear, the pain, the suffering, lest you end up with an "only child."


"What I was when first
I came among these hills; when like a roe
I bounded o'er the mountains, by the sides,
Of the deep rivers, and the lonely streams,
Wherever nature led: more like a man
Flying from something that he dreads than one
Who sought the things he loved...."   William Wordsworth

The outcome is obvious; we're still here, still climbing mountains, trying to squeeze the last daub of "Life" from near-empty tubes. Now, as I write this post, it seems like only yesterday that we were young and strong and beautiful...and so naive. We still crave challenges. It is "Peaks" that make our "valleys" tolerable, in spite of—or perhaps because of— the  experience of fear, pain, suffering, lo, maybe even an eventual injury or death. No matter your "thing," a meaningful and worthwhile life requires an element of risk. Without risk one has nothing to lose. It's like playing poker with matchsticks instead of money. You lose interest...

"...the stark reality of death, that half-dreaded, half-invited angel, ever brooding in the shadows of the climber's world." Guy Waterman,  A Fine Kind of Madness 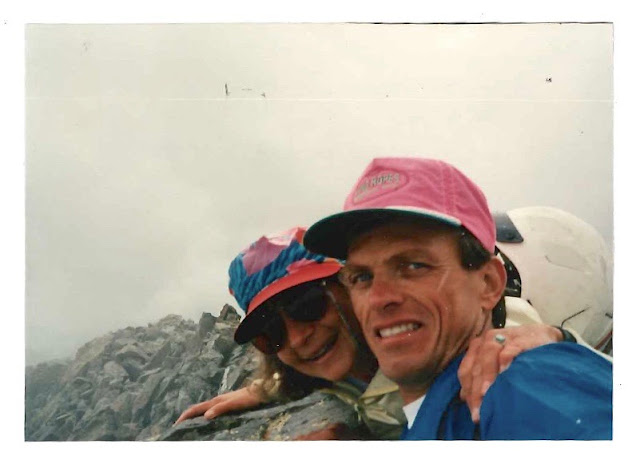