There are days when I feel like I can whip the entire world. Today was not one of them... 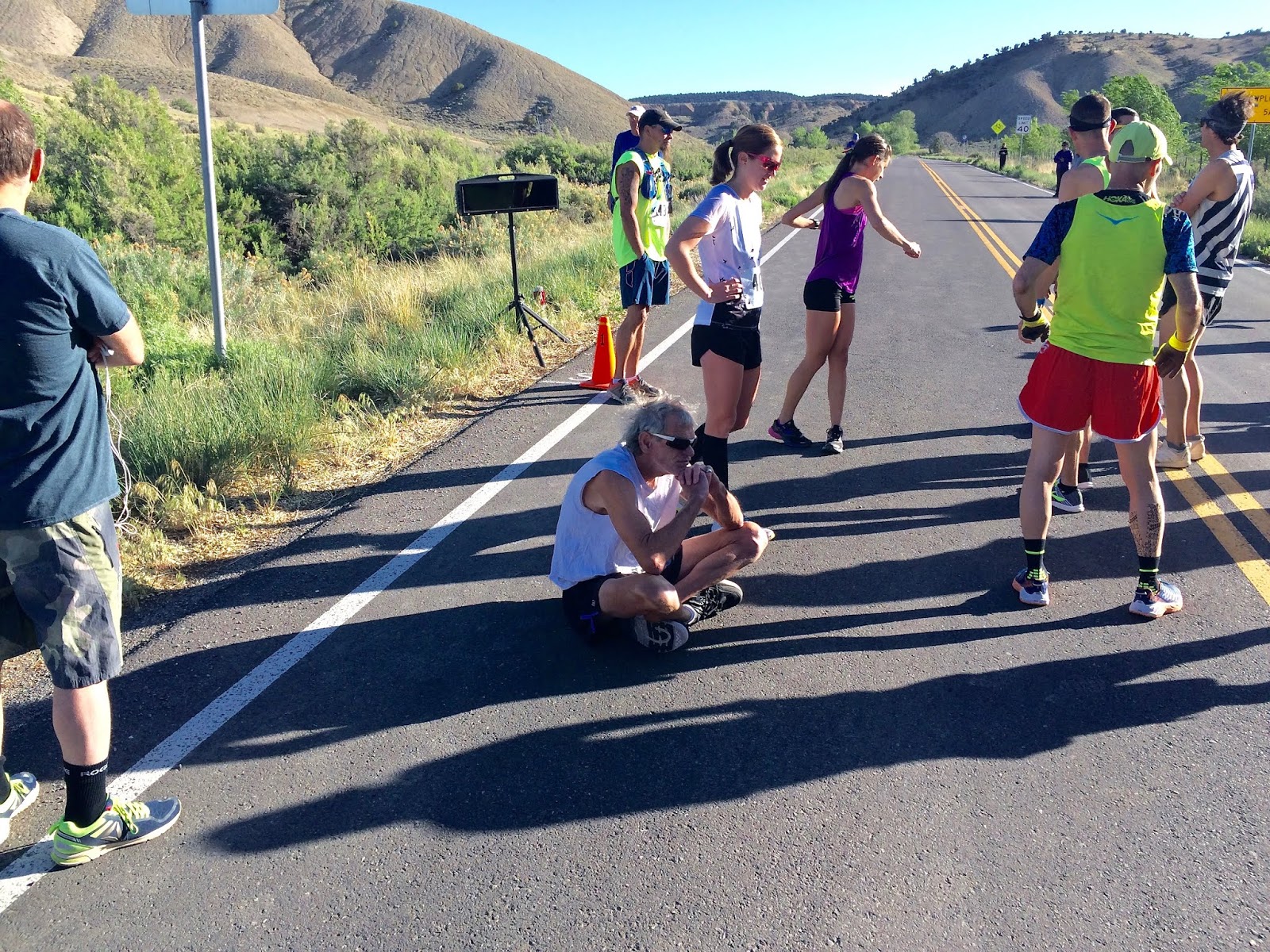 "We always default to self deprecation..."   Samsara, by Juliet Lina.

My alarm is set for 5:32 AM, but I'm awake by 5. Dawn breaks softly. I count distant stars as they disappear one by one. Light eases into La Crevice with the stealth of a panther, imperceptible degrees of movement. Still, this time of year, we live the early and late hours of daylight without sun, which does not strike our windows until 8:38 AM, and slips behind another mountain by 3 PM. 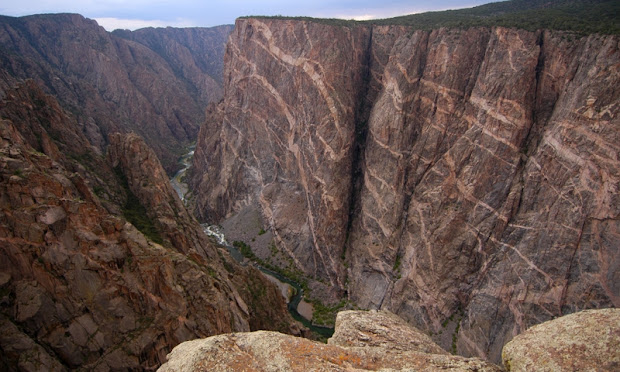 Today is the Black Canyon Ascent: 2000 feet of elevation gain over six miles. My stomach is queasy, yet I roll out of bed and force-feed it strong, acidic coffee. I will need Tums and slip half a dozen into my pocket.

It's barely 6 AM when Leon hollers up the stairwell that he's ready. I skip breakfast, pop another Tums. 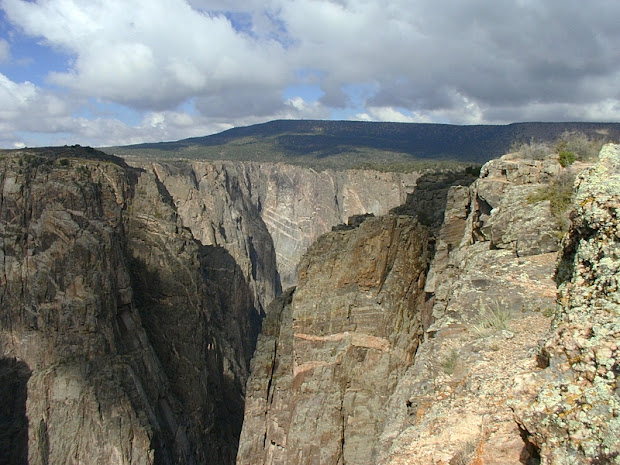 My bag is packed with clothing for a cold start (wool sweater) and a hot finish (tank top). I'll decide what to wear at the gun...erring on the side of being cold for the first mile. 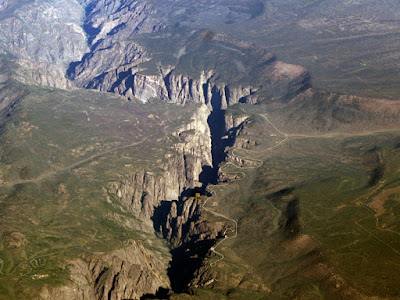 The Black Canyon went from being a National Monument to a National Park in 1999. It's an unlikely geological gash in the earth's crust...quite narrow considering it's depth.

The Black Canyon's name came from the lack of sunlight penetrating into it's deep and narrow gorge. The dark shadows cause volcanic based, 1.7 billion year old rock walls to appear black.

The wind is blowing so we sit in the car for a while. Restlessness sets in so we bail into the cold to stretch leg muscles.

Soon enough, runners are called to the start line. I know my place and slip to the back, while Leon moves forward. He's gunning for a sub-hour time, but our age division is top heavy with fast Geezers who will likely be taking home the "Gold."

I don't care about Gold, but would like to average 11 or 12 minute miles over the six mile course. In my running prime (30's) I was routinely under an hour at the Black Canyon. But now, pushing 68, it will be interesting to see what happens (unless I die from ego induced exertion, a form of stupidity typically afflicting aging males). 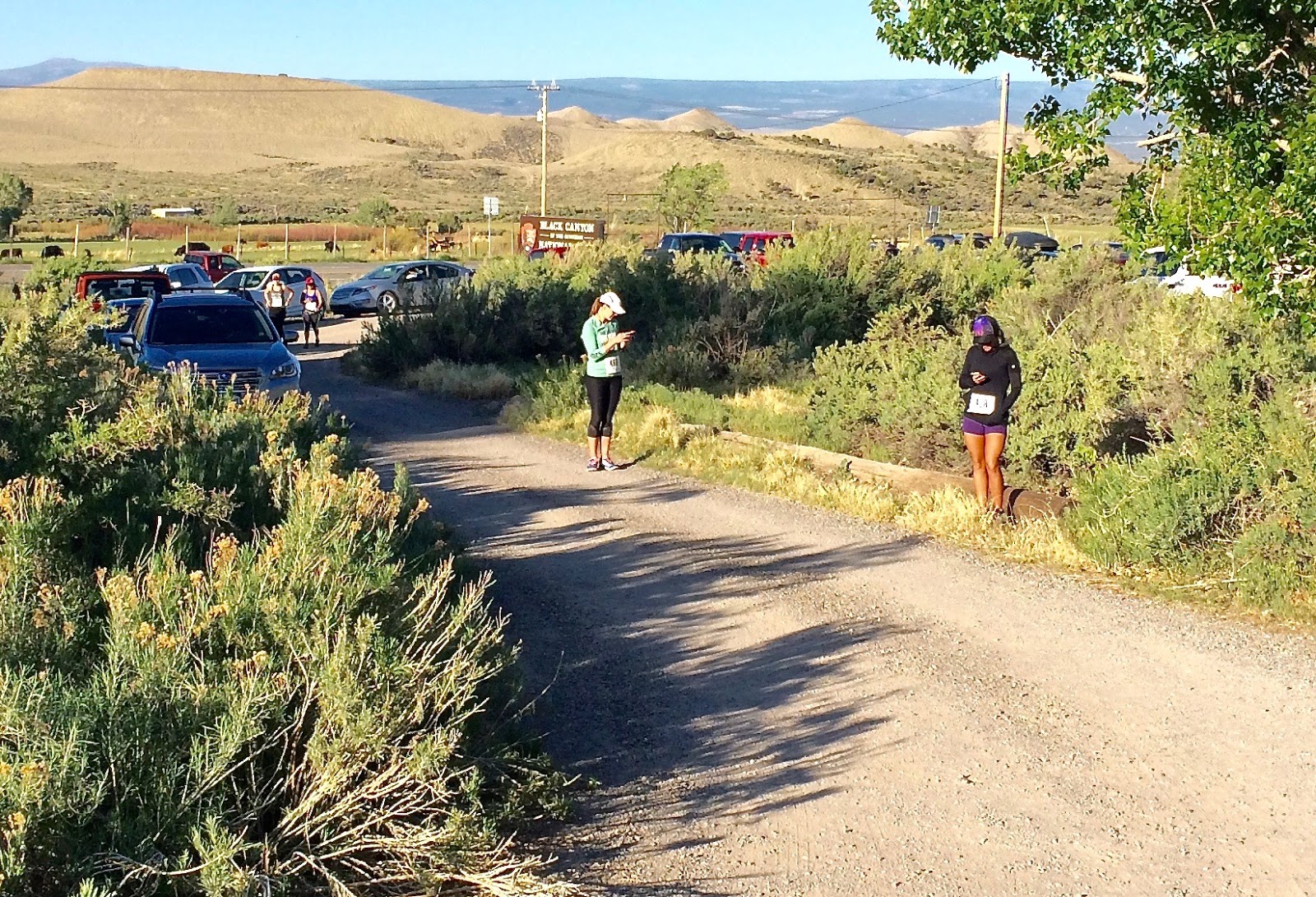 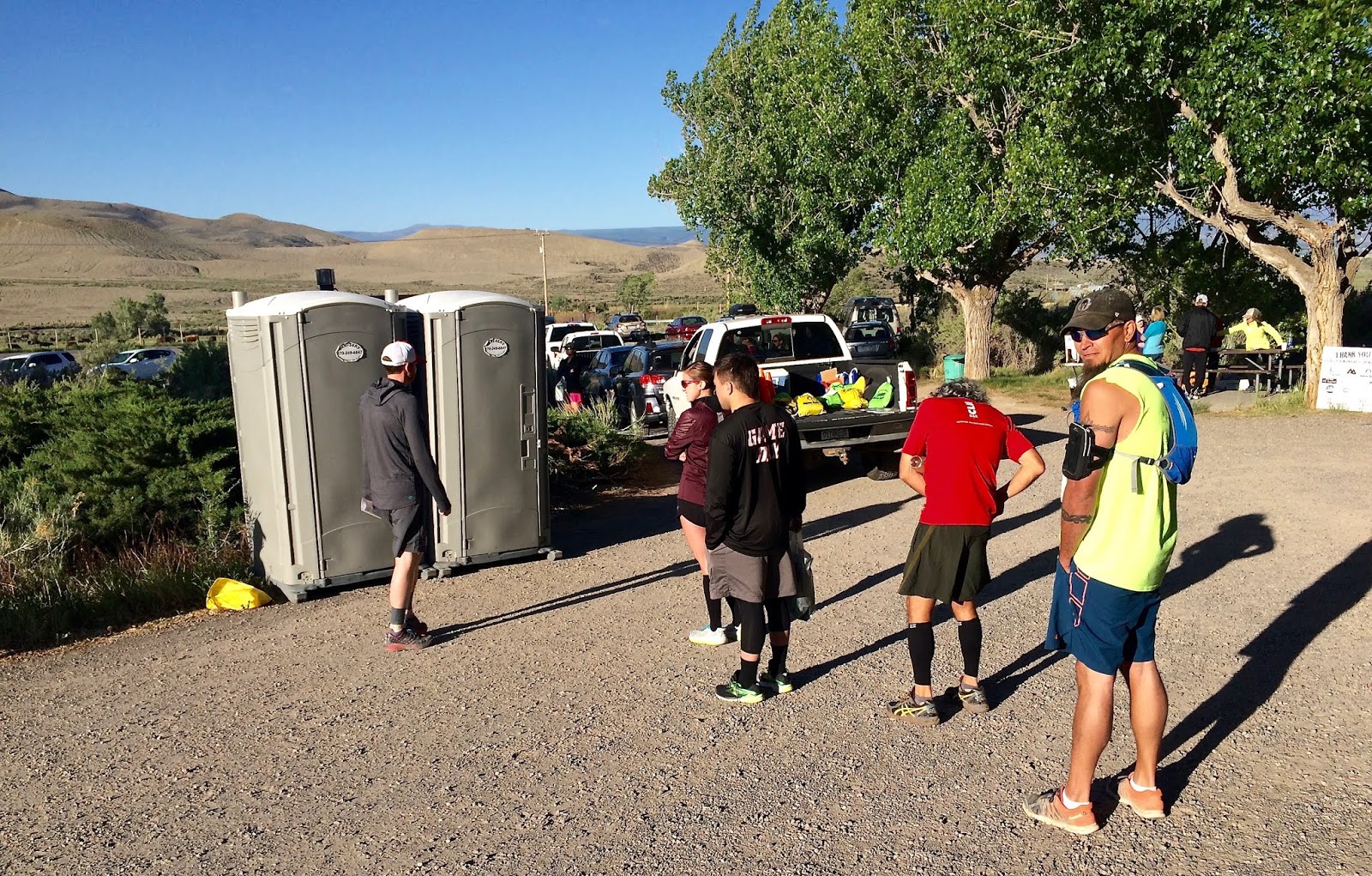 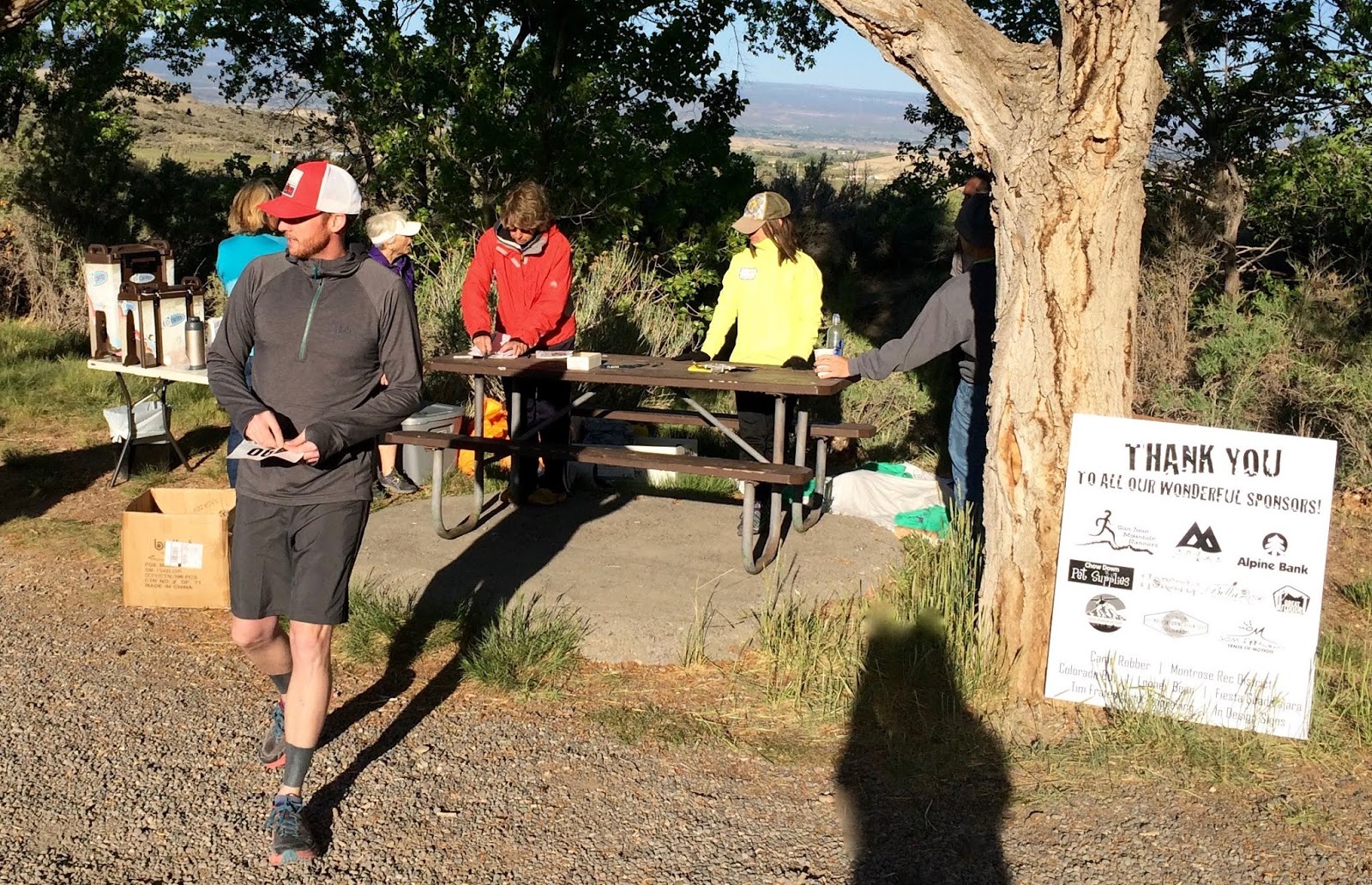 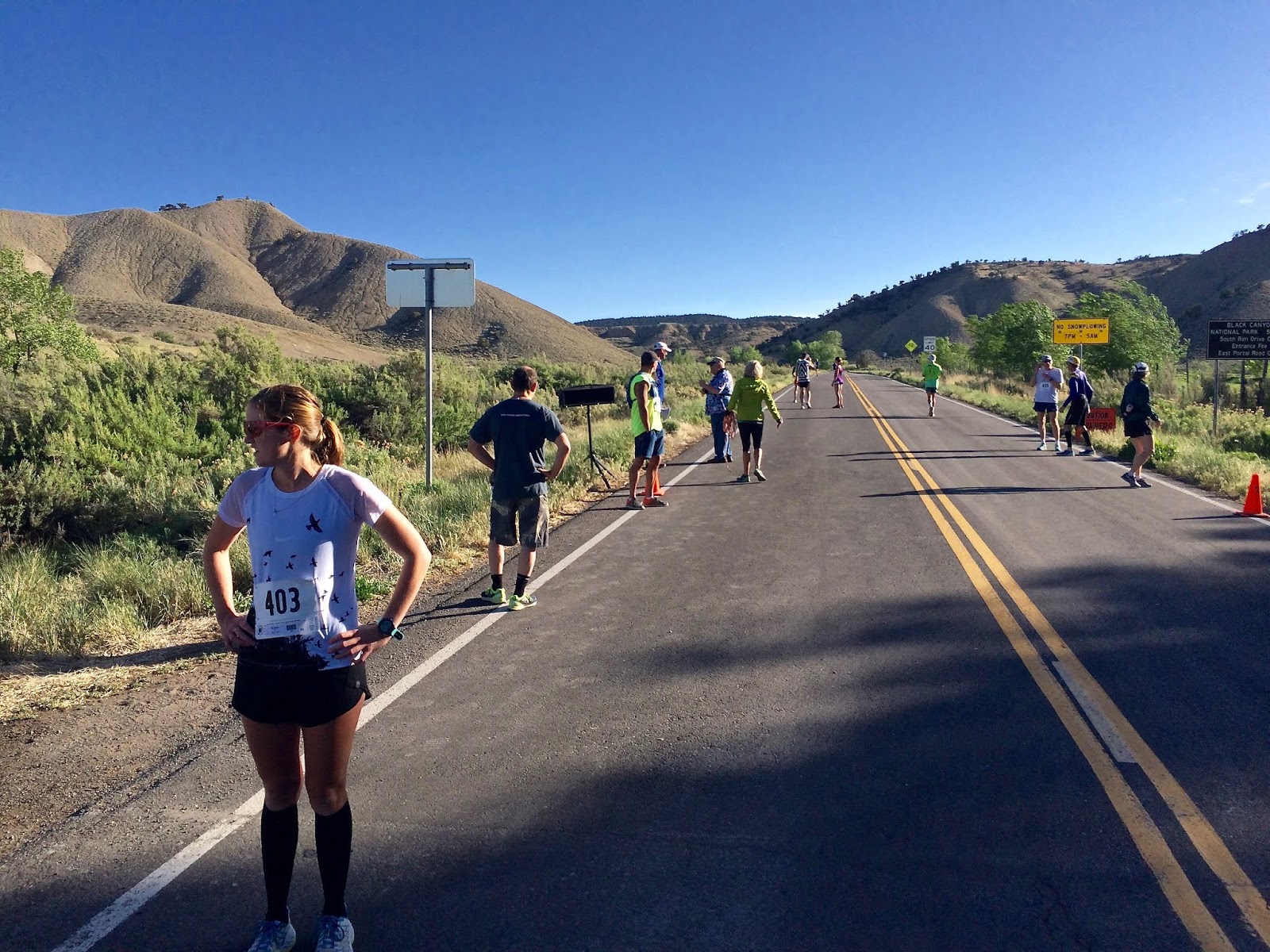 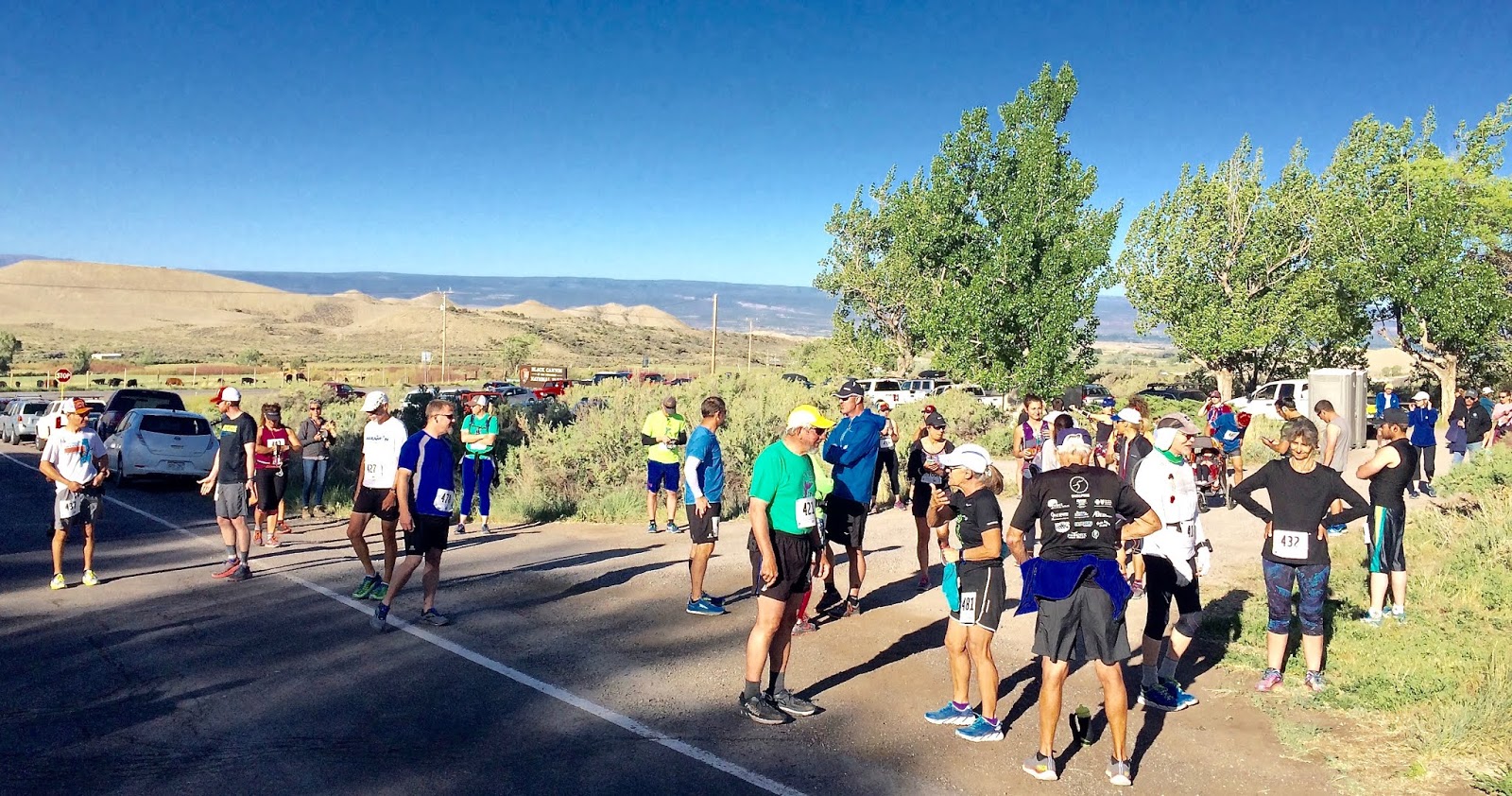 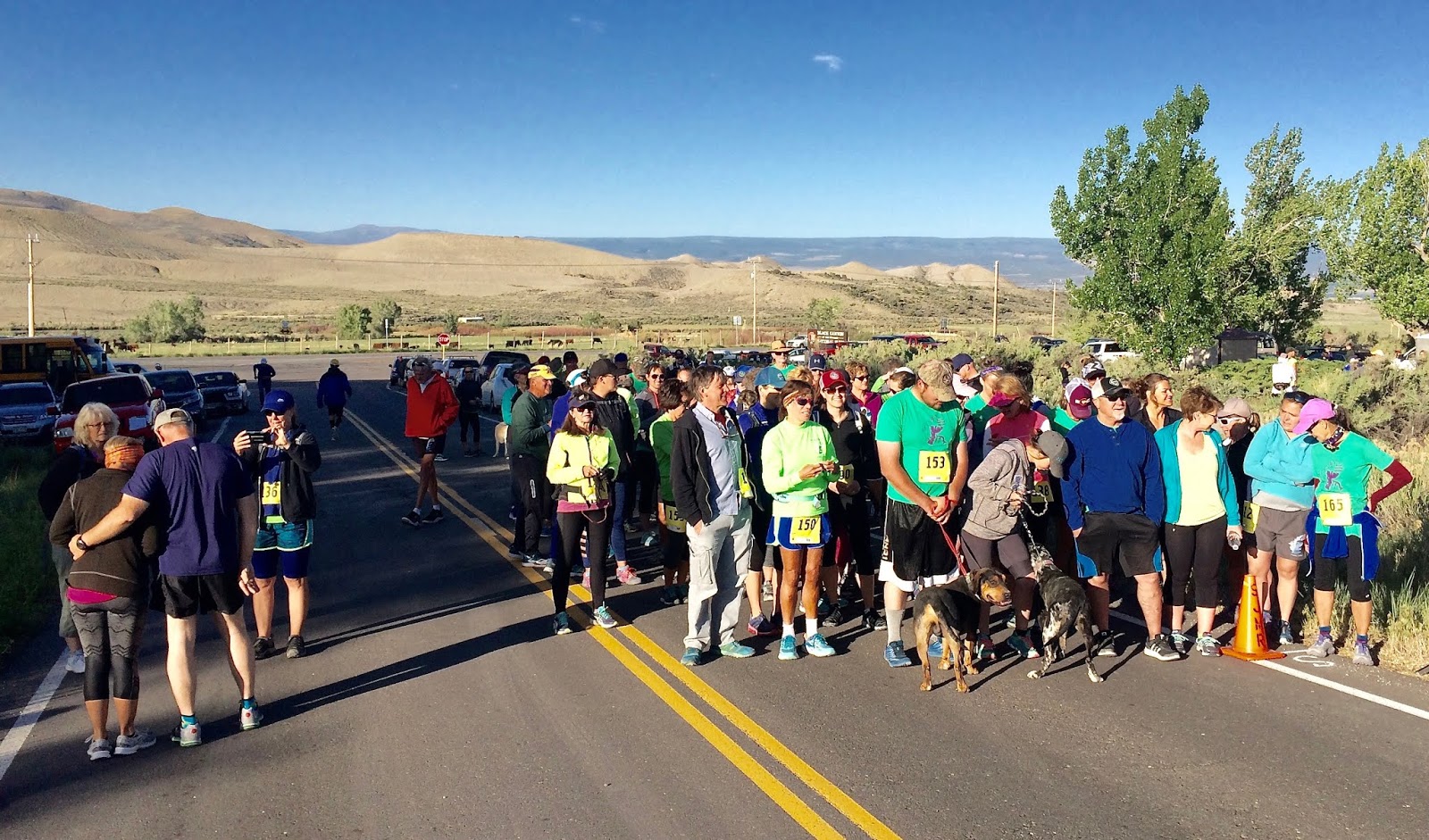 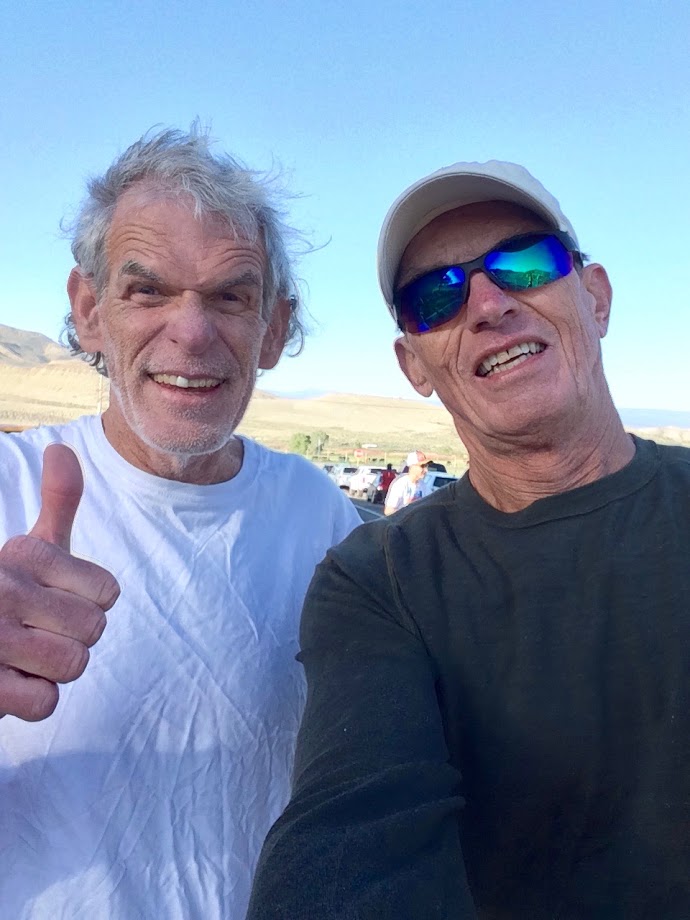 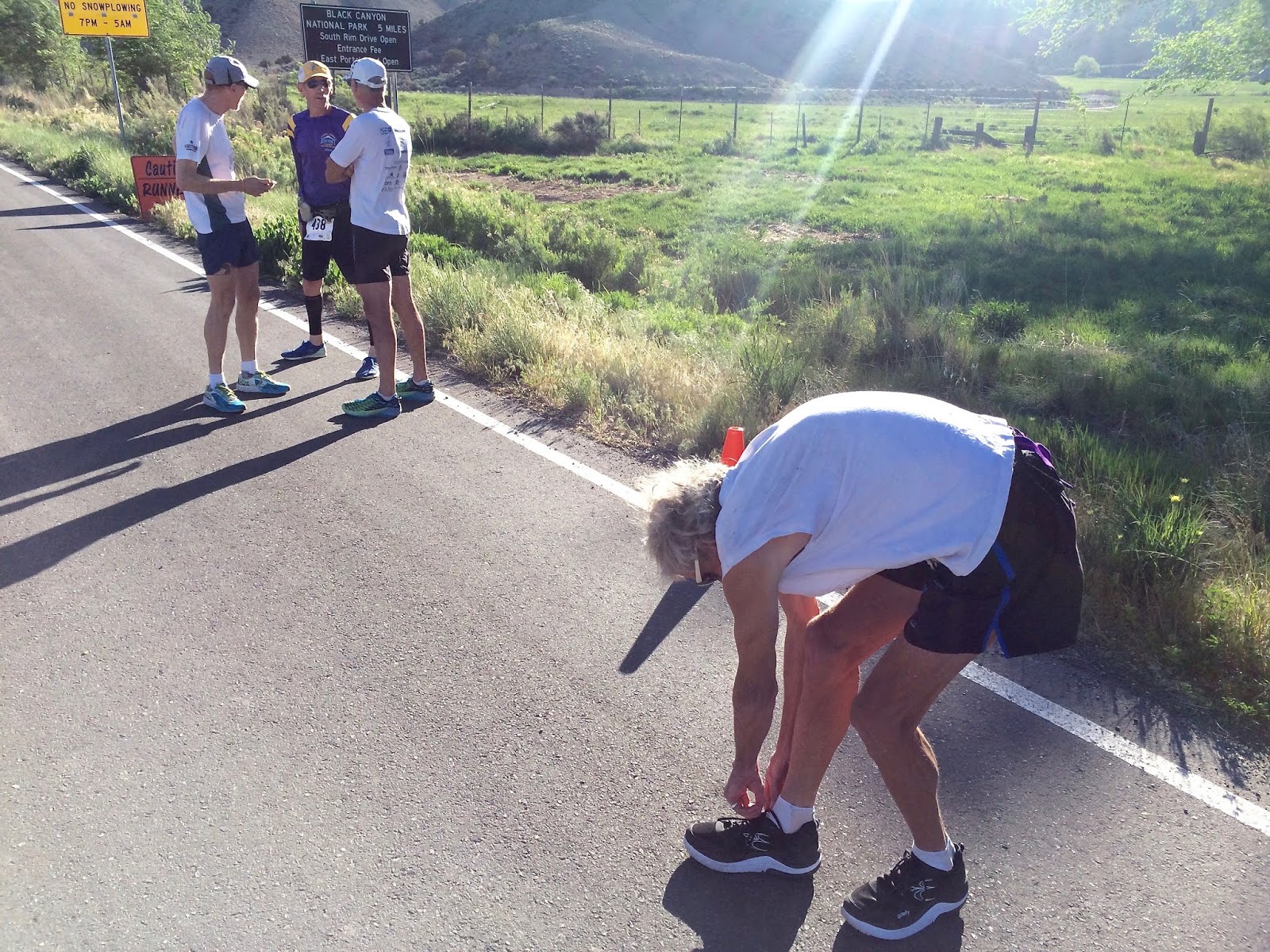 "Bang," we're off...Leon in a large group of front runners, me back with the slowpokes where I belong. The first hill is a doozy...a little something to let you know who's boss and make you question choices to do such things.

Right off the bat I have difficulty catching my breath, which confuses me because I've been training at 8 to 12 thousand feet and the start line is 6,500. Granted the hill is steep, but so are all the hills I've been training on. My pulse is elevated and I can barely push off. WTF?

The only cause I can think of...besides the fact that I have been power-hiking/biking instead of running...is that I consumed too much coffee...two large, strong cups on an empty stomach was not the smartest way to start a difficult race.

I have no choice but to slow down and give my heart a break till my body can metabolize some of the caffeine coursing through veins. It takes 3 agonizing miles...fifteen minute miles Argh and Damn.

I plod the race like a pregnant cow, so slow I'm embarrassed...not in last place but damn close. My legs are rubber by the time my heart rate normalizes.

I catch up to a few Walkers, barely passing them. I'm not sure what my time was...something just under an hour and 30 minutes, I think, 20 some minutes beyond what I hope to accomplish, which sucks.

I find Leon at the post race party. He's down about his time, too (tho it was fast by any age standard @ an hour and two minutes, but slower than last year by over 4 minutes. He wanted so bad to run with the "big (old) boys" this year...thought he was ready. His legs tell him otherwise.

We pick up our T shirt consolation prize and get on the bus, quiet and slumped in our seats, shaking heads, Deprecating our Selves with a pity party.

Oh well. Mama said there'd be days like this. I suppose we better get used to it at this age :)

Monday we'll get back to the "grind" of training. Maybe next year I'll turn in a respectable time...or not.
Boo hoo from Lovely Ouray.
The mountain kicked our butts.
mark and leon 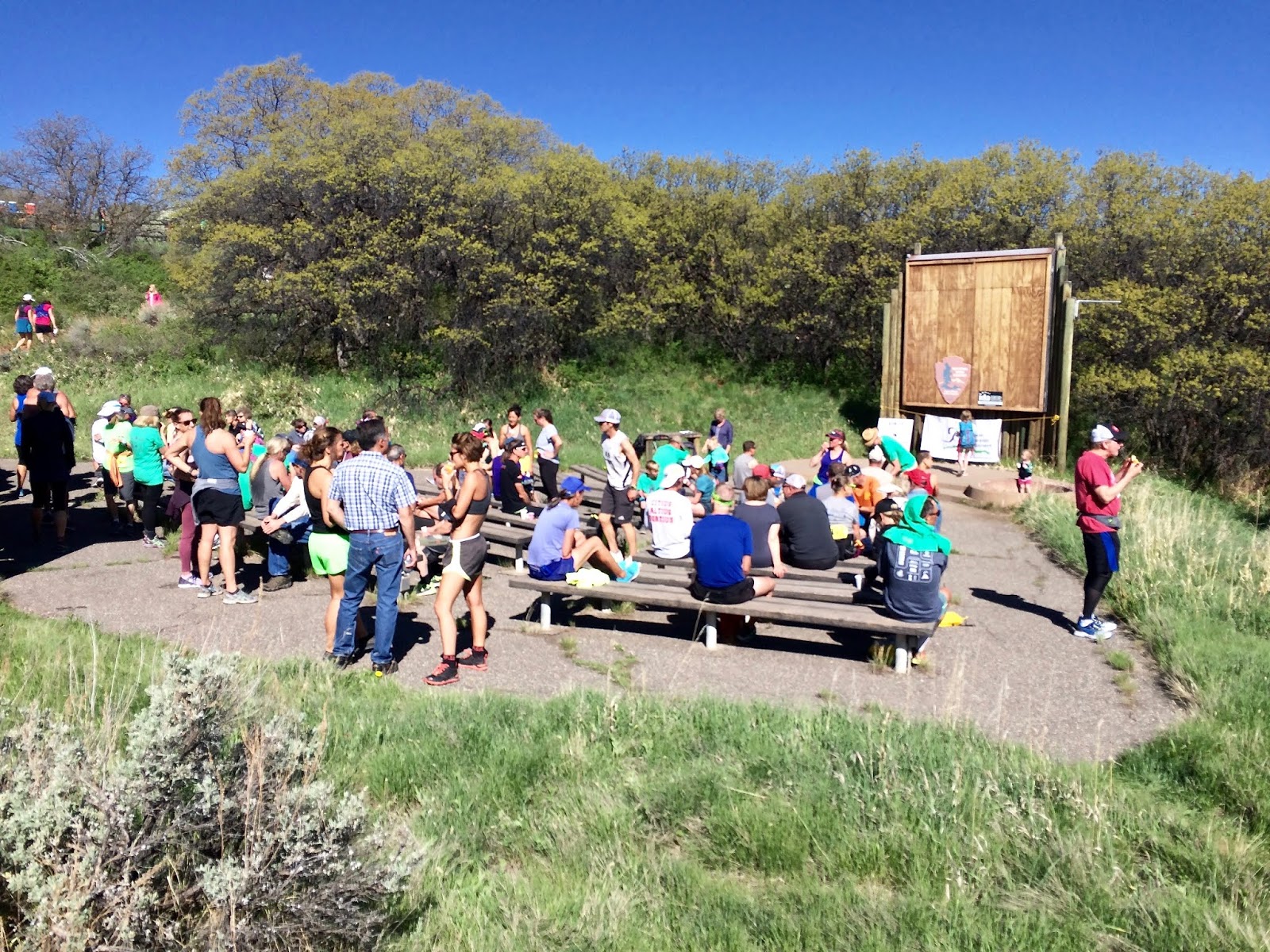 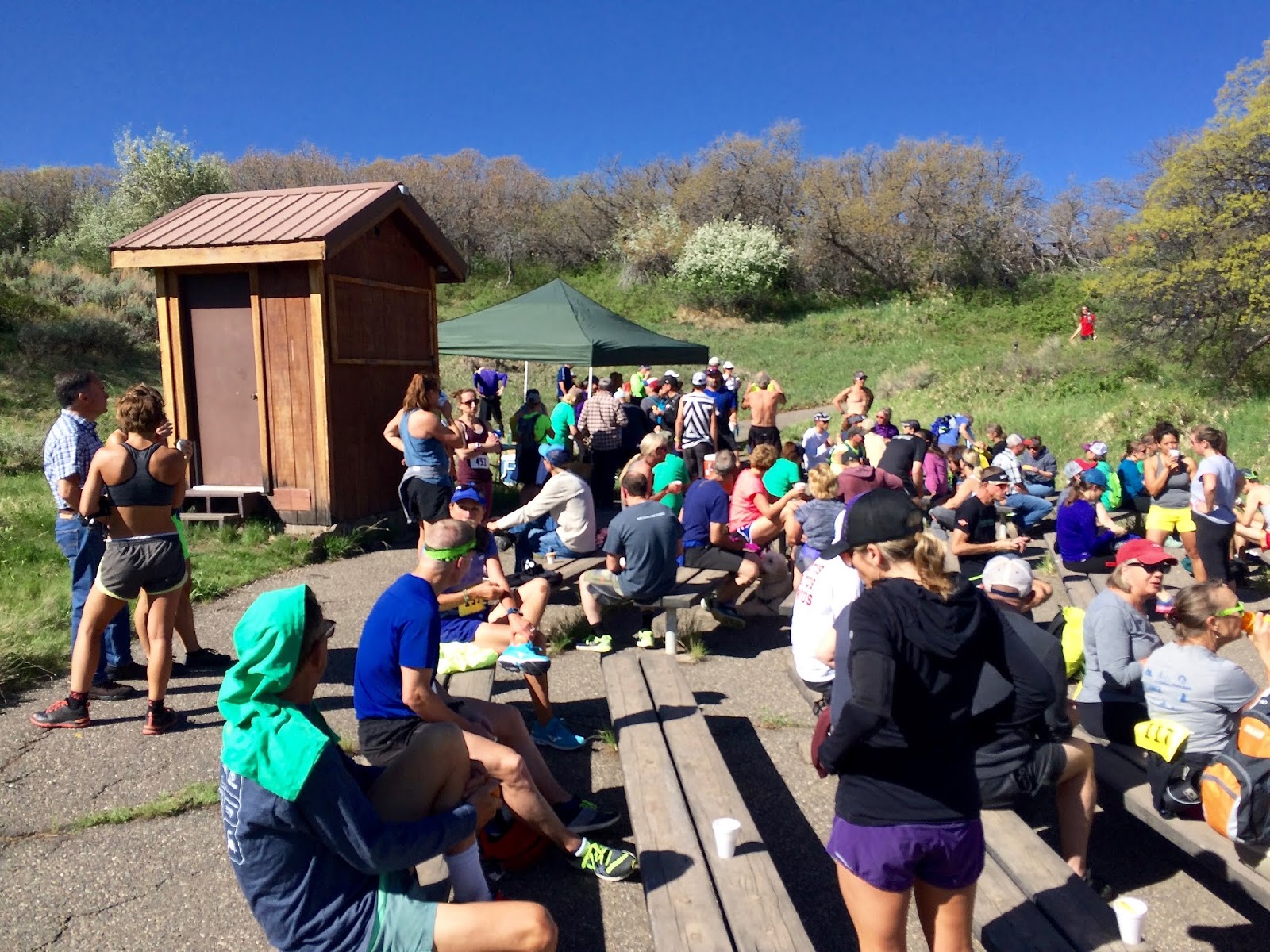