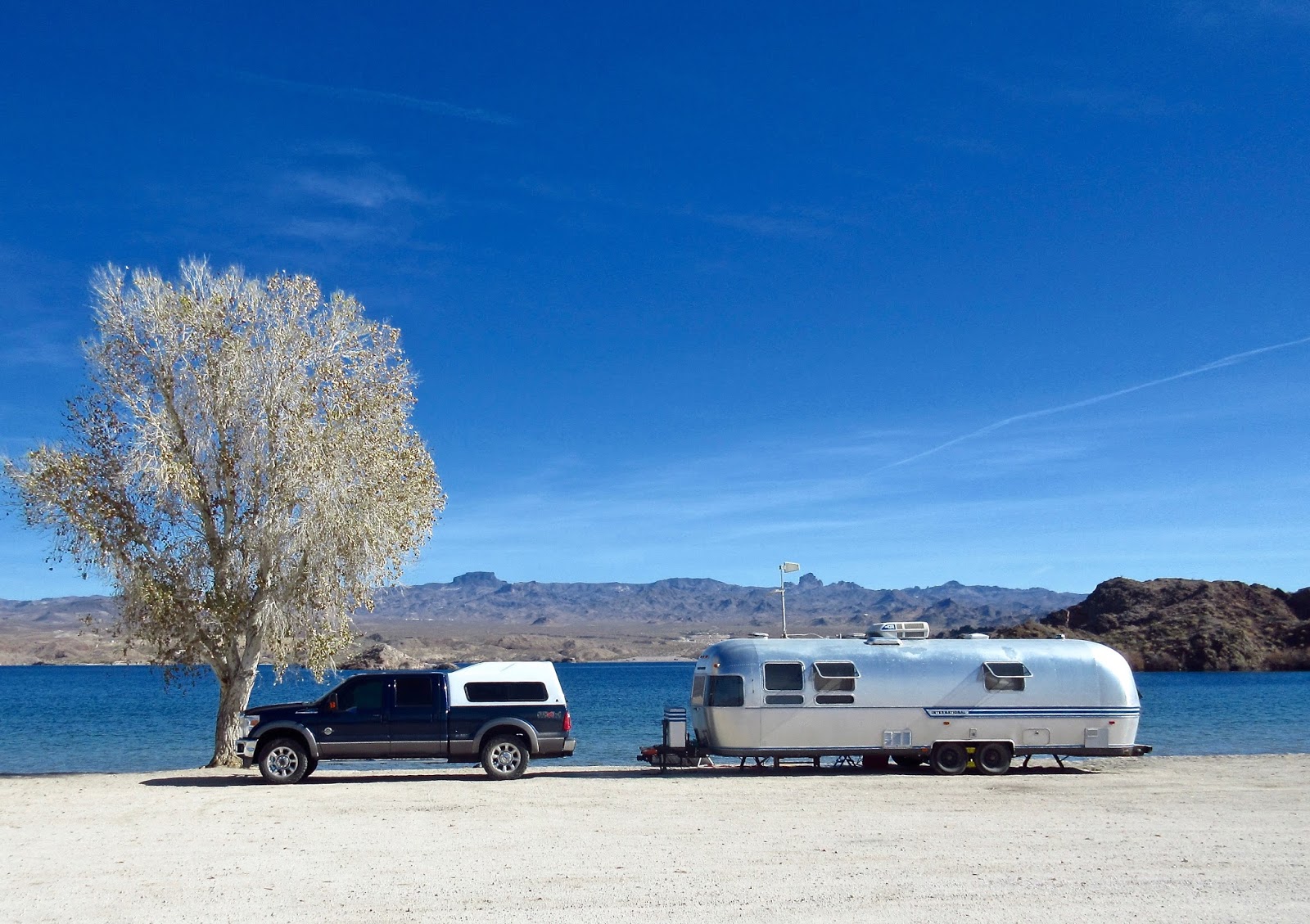 Ever notice how the grass is always greener on the other side of the lake? After only one day at Catherine's Landing we surrendered to wanton roving eyes and a desire for new territory...someplace where the peaks are taller, mountains more rugged and mysterious, and canyons run wild and woolly into wilderness.

Our attempts to find Grapevine Canyon were feeble and unsuccessful. It looked simple, just cross the bridge over the Colorado River into Nevada, and hang a right. That first move landed us at a dead end park below Davis Dam. Nice, but not exactly what we were looking for. Back out to the highway, try again...

The next right was a dirt road that looked promising. Six to seven miles later another dead end, this time, though, at a nice beach with dispersed free camping right on water's edge! Cool. But having no kayaks or paddle boards we needed a wash to hike. Luckily we found one on the way out, only a stone's throw from the beach. 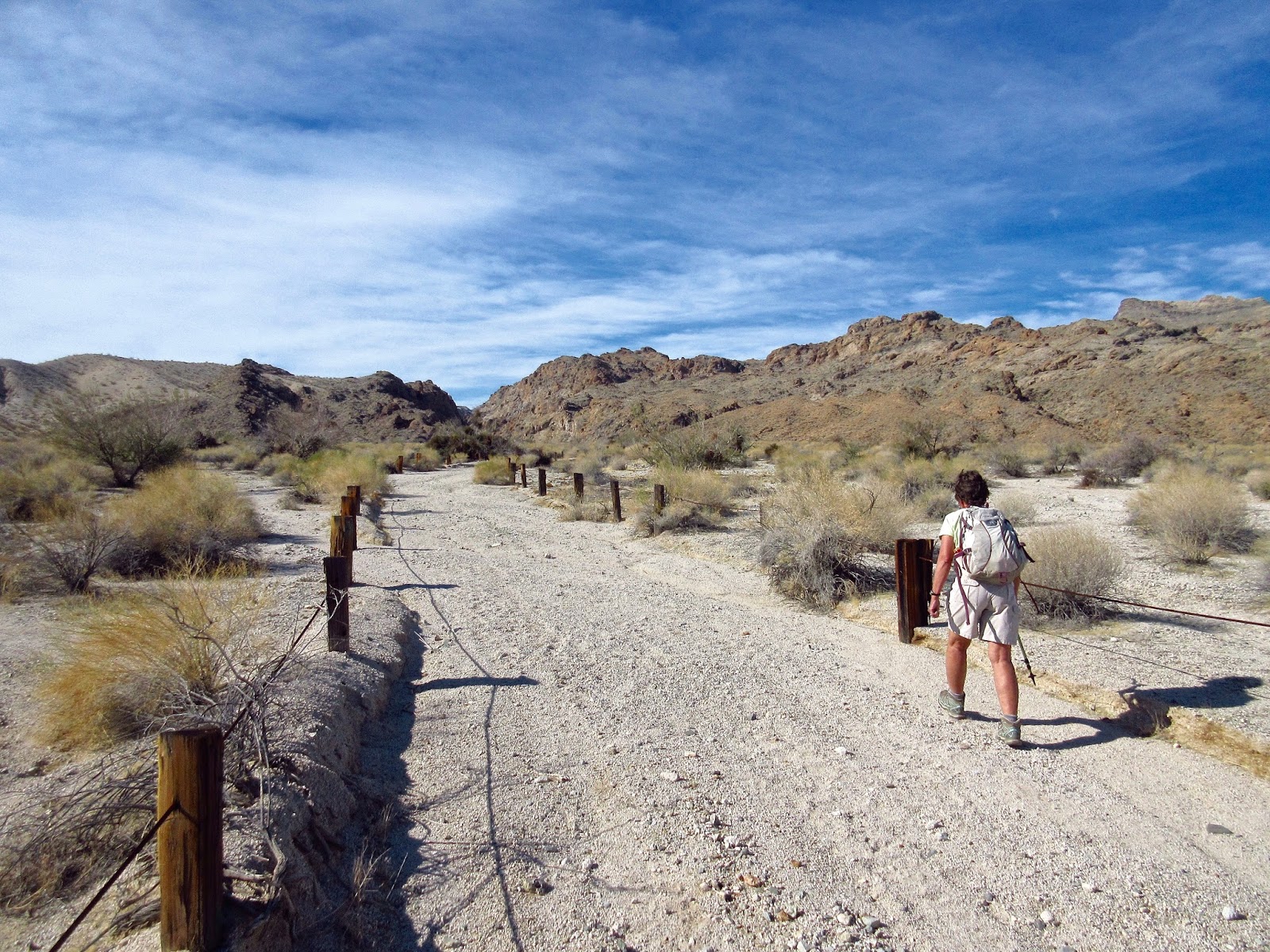 We entered a posted wilderness area and hiked up a wash. It was obviously a road at one time, but now barricaded to vehicular traffic. The road headed toward a range of rather hostile looking volcanic mountains. Perfect. They had a burnt uber ragged crust that resembled cooled lava...all pocked and jagged like it would tear a chunk out of your leg if you brushed up against it. 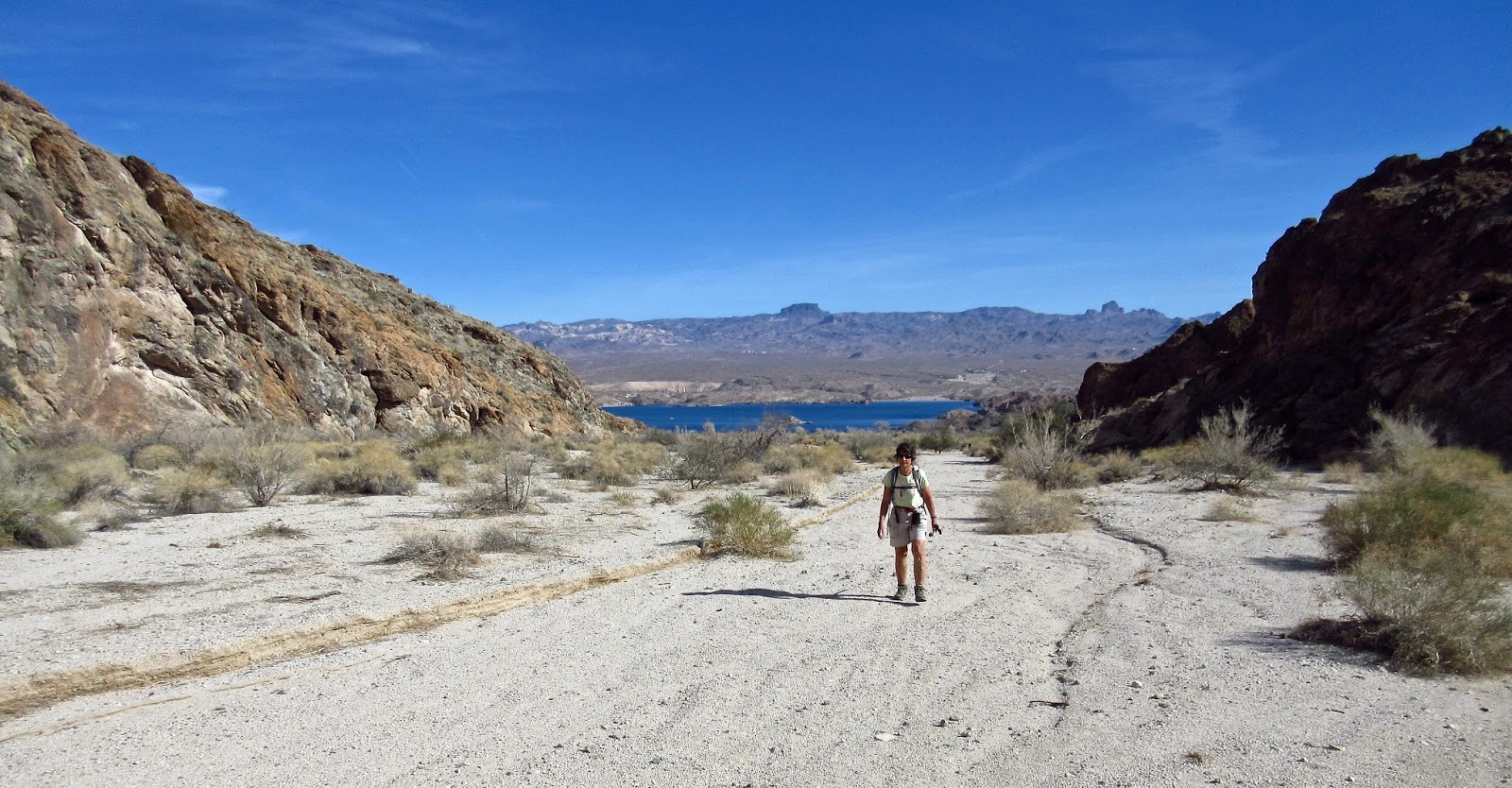 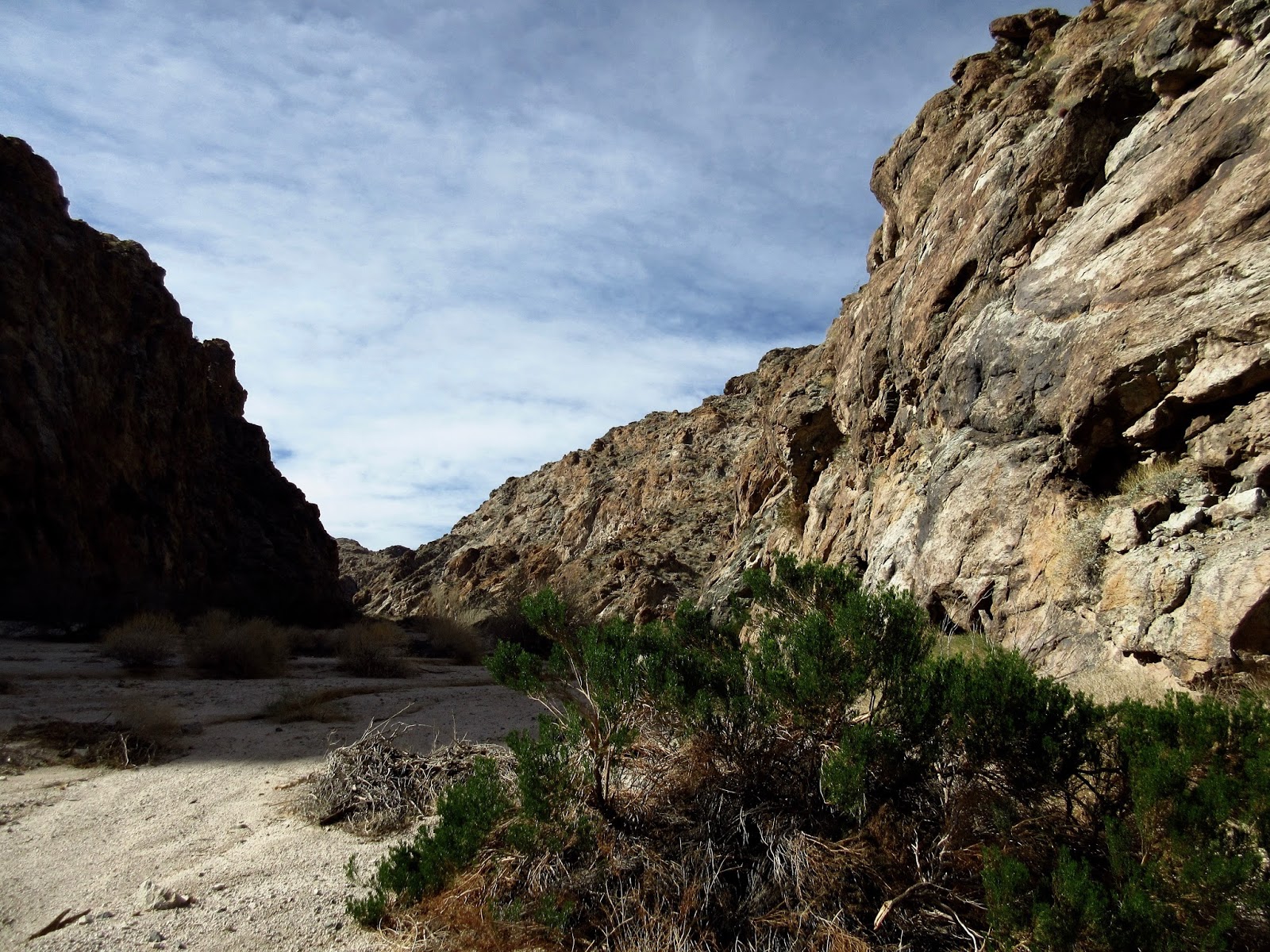 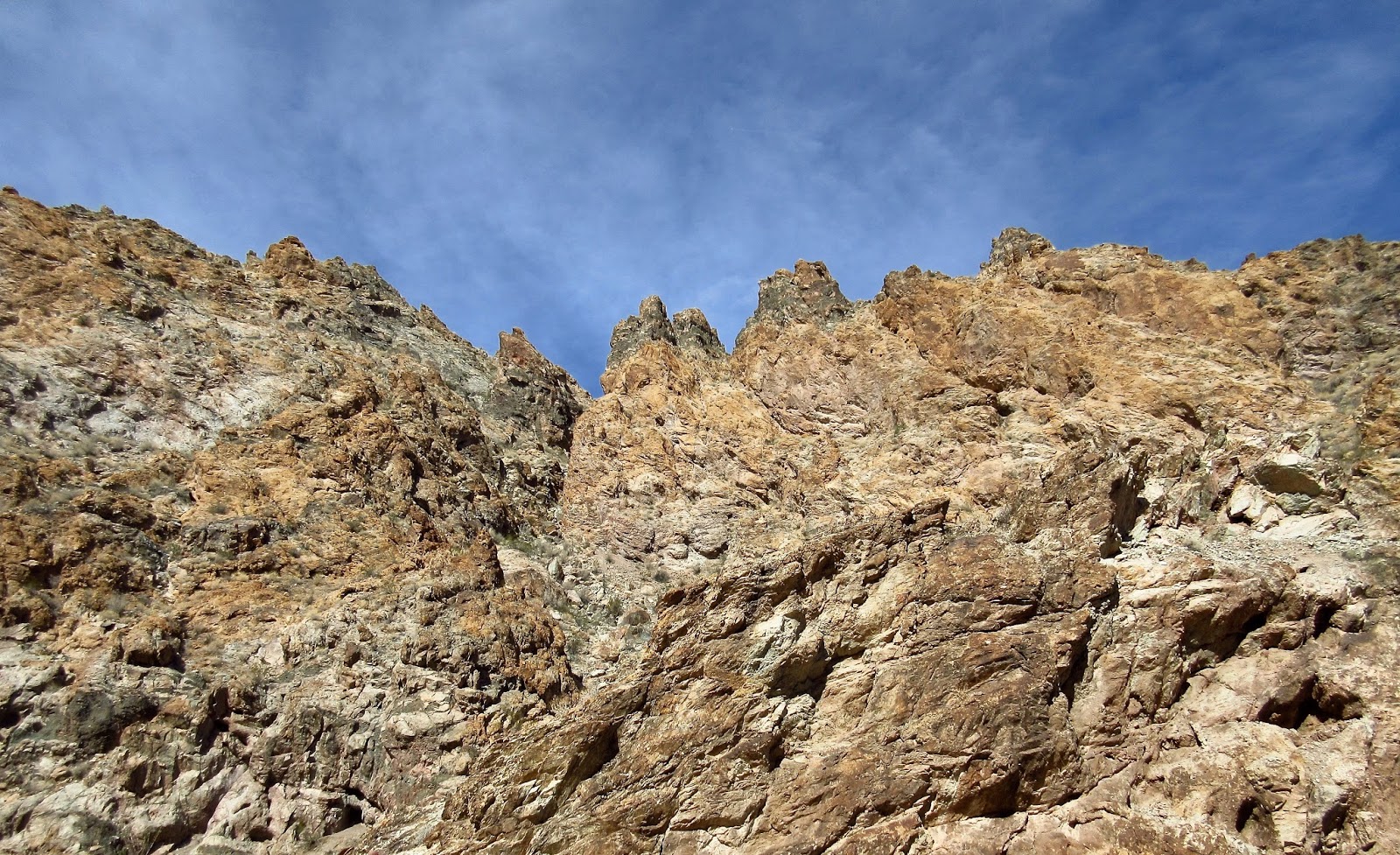 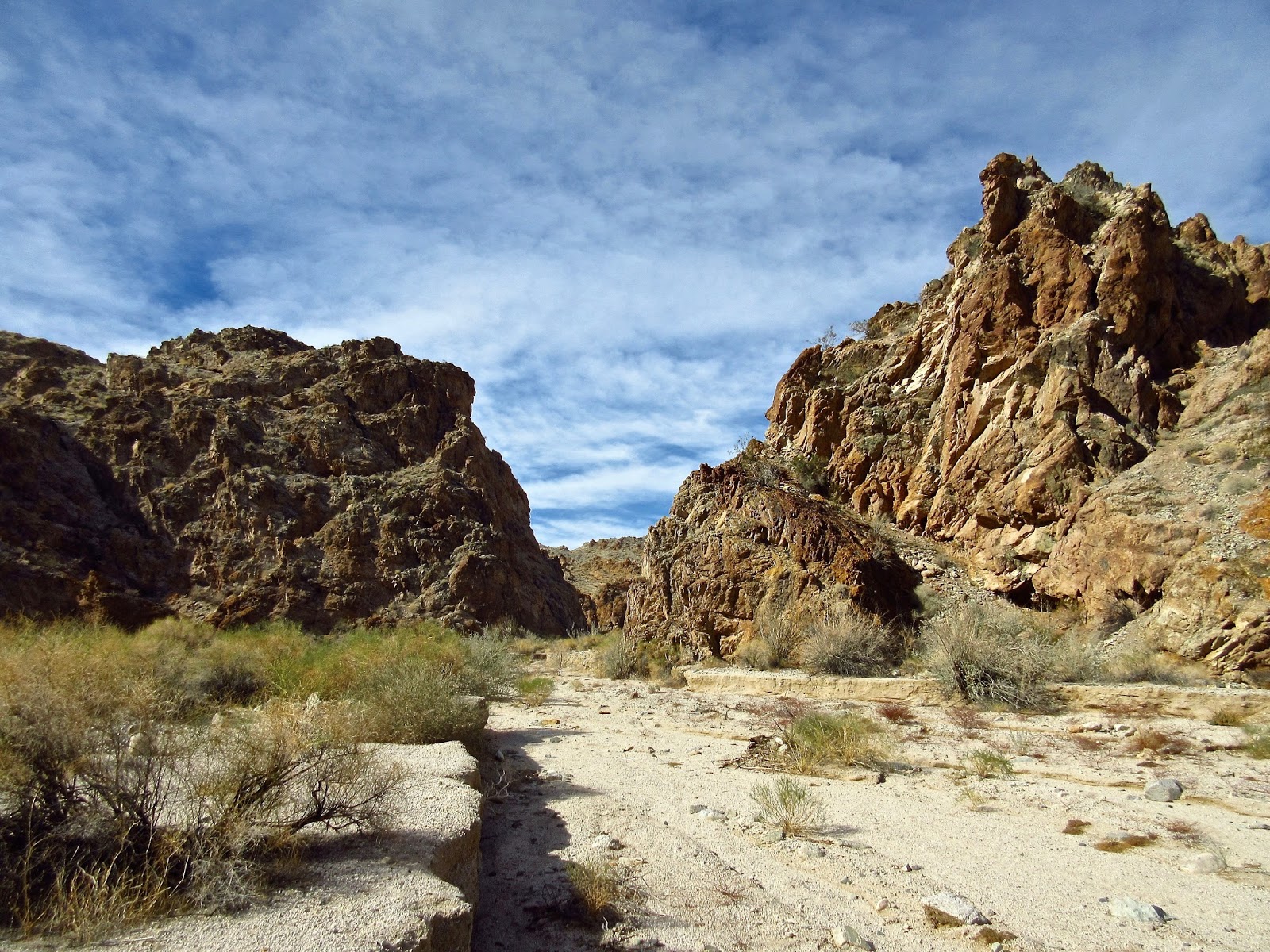 After a couple miles canyon walls began to close in. We tried to imagine how long we would last on a summer hike with temps of 110 to 115 degrees. Maybe a mile? 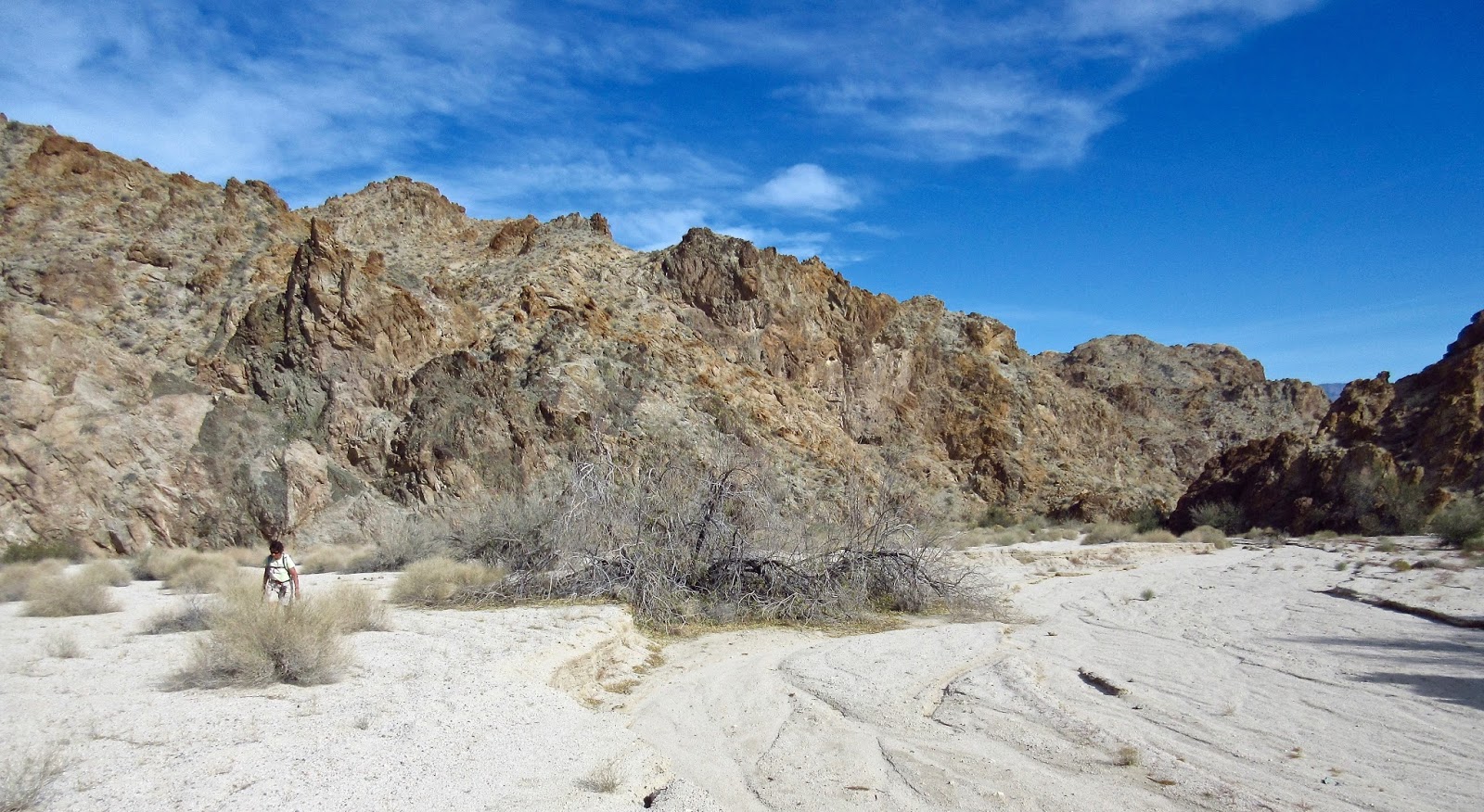 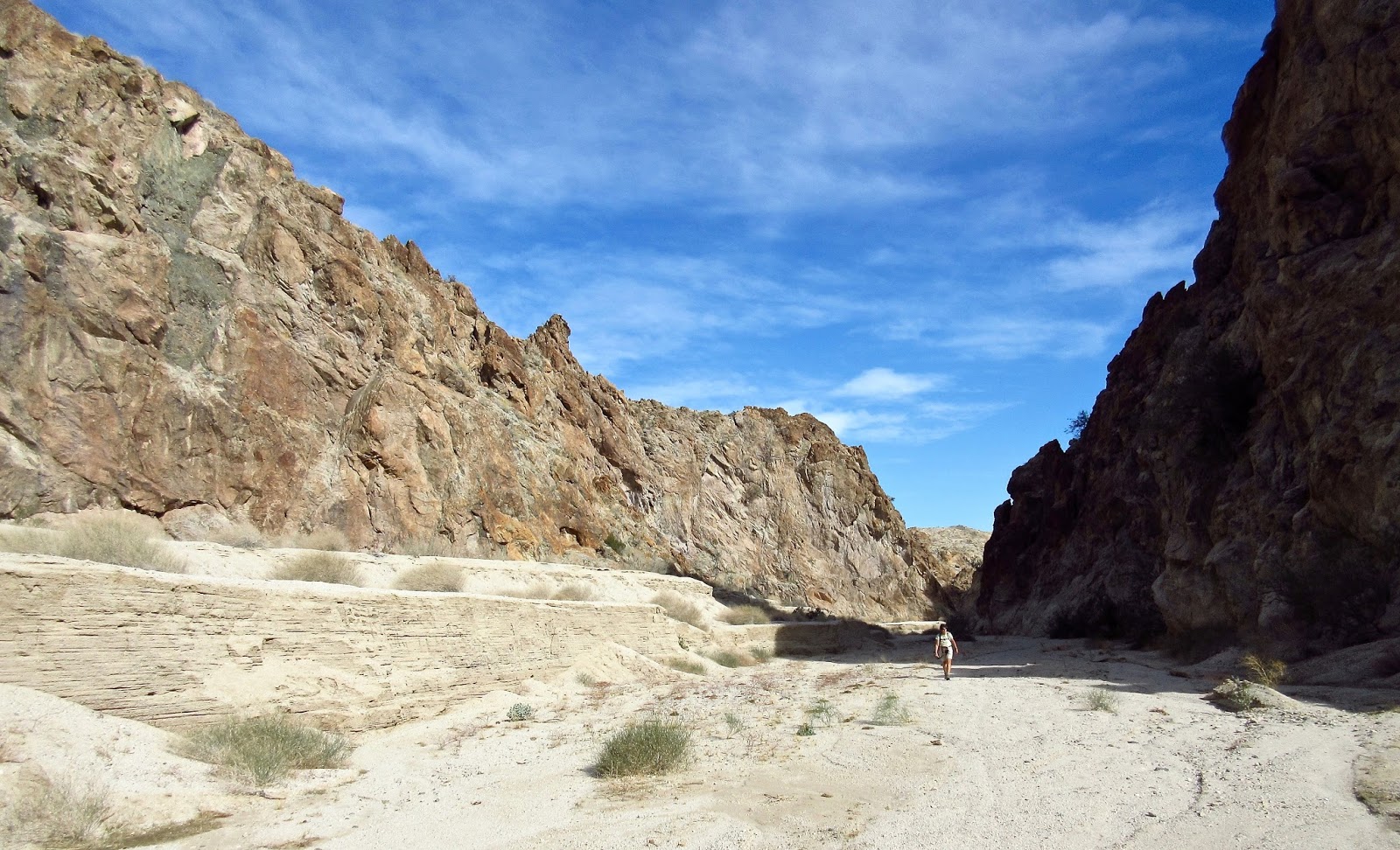 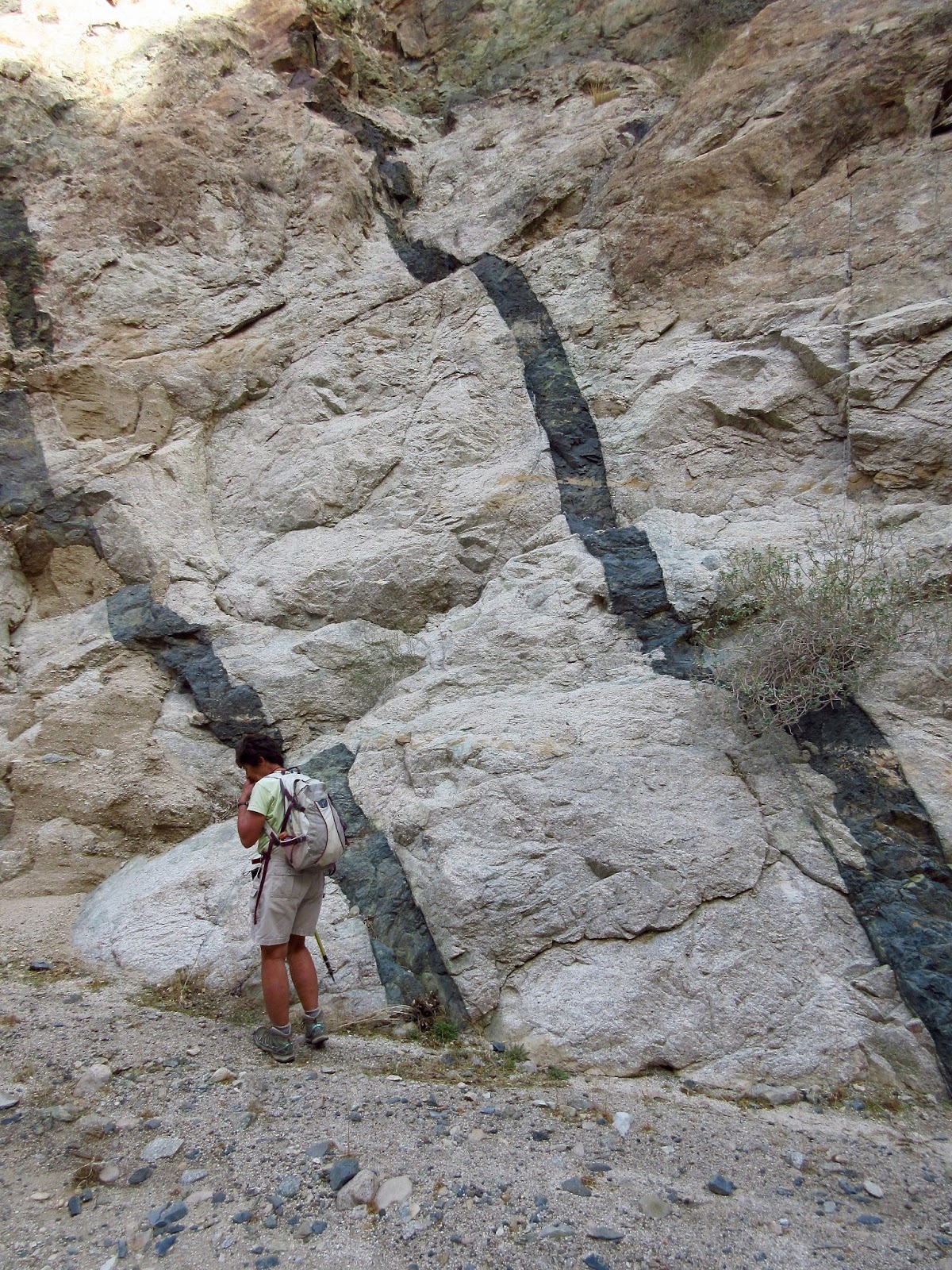 We kept seeing these well defined seams of black rock, and couldn't figure out the cause or what they were. Some of it had a jade green tint and was quite beautiful. 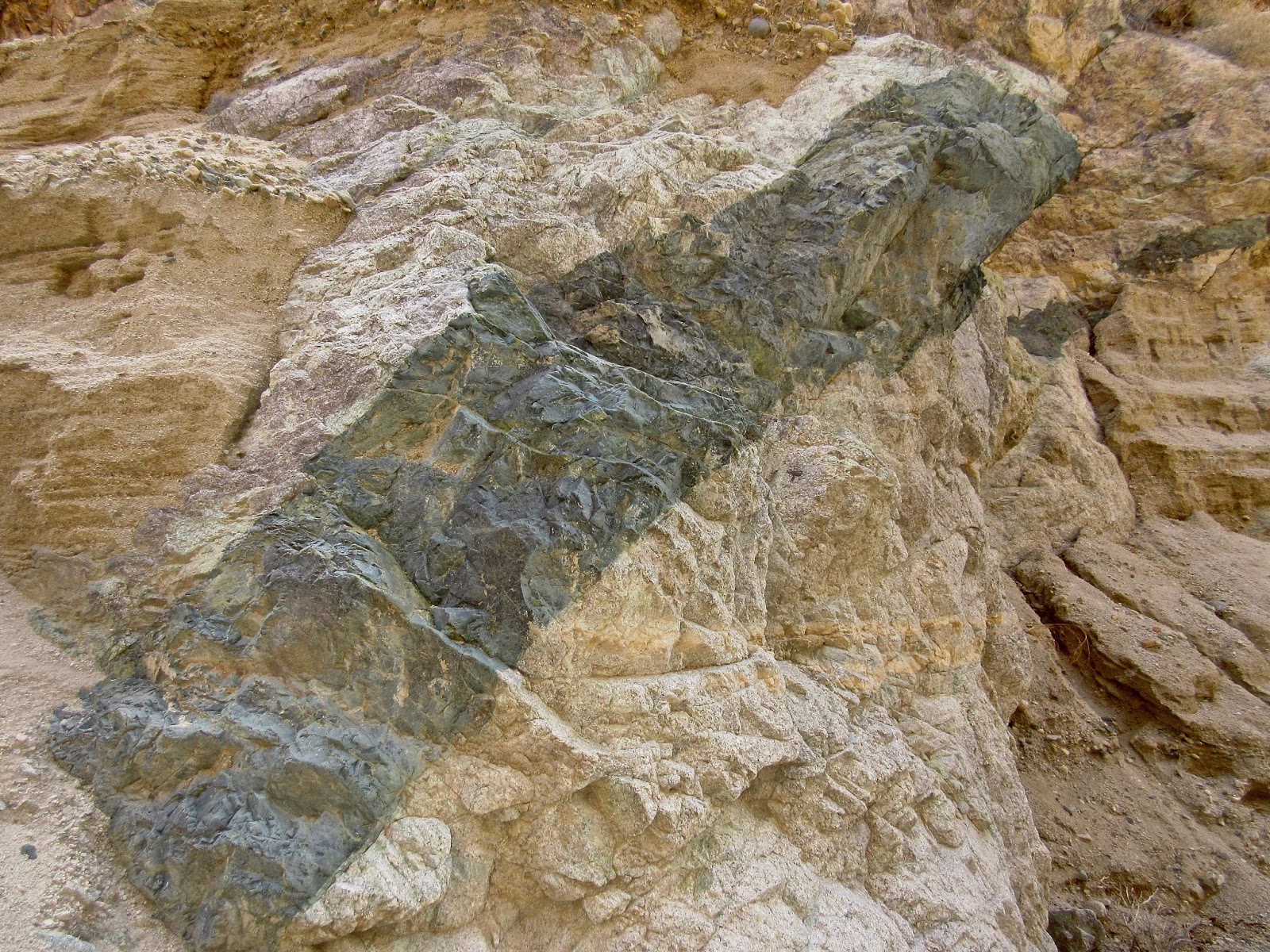 The more canyon walls close in, the more enthused we became. Not exactly a slot canyon, but cool nonetheless. Eventually we were faced with the inevitable choke-stone with sheer walls on both sides. A half-rotted rope dangled from a few rocks someone wedged between the choke-stone and canyon wall. About halfway up I lost faith...in both the rope, and what it was tied to. 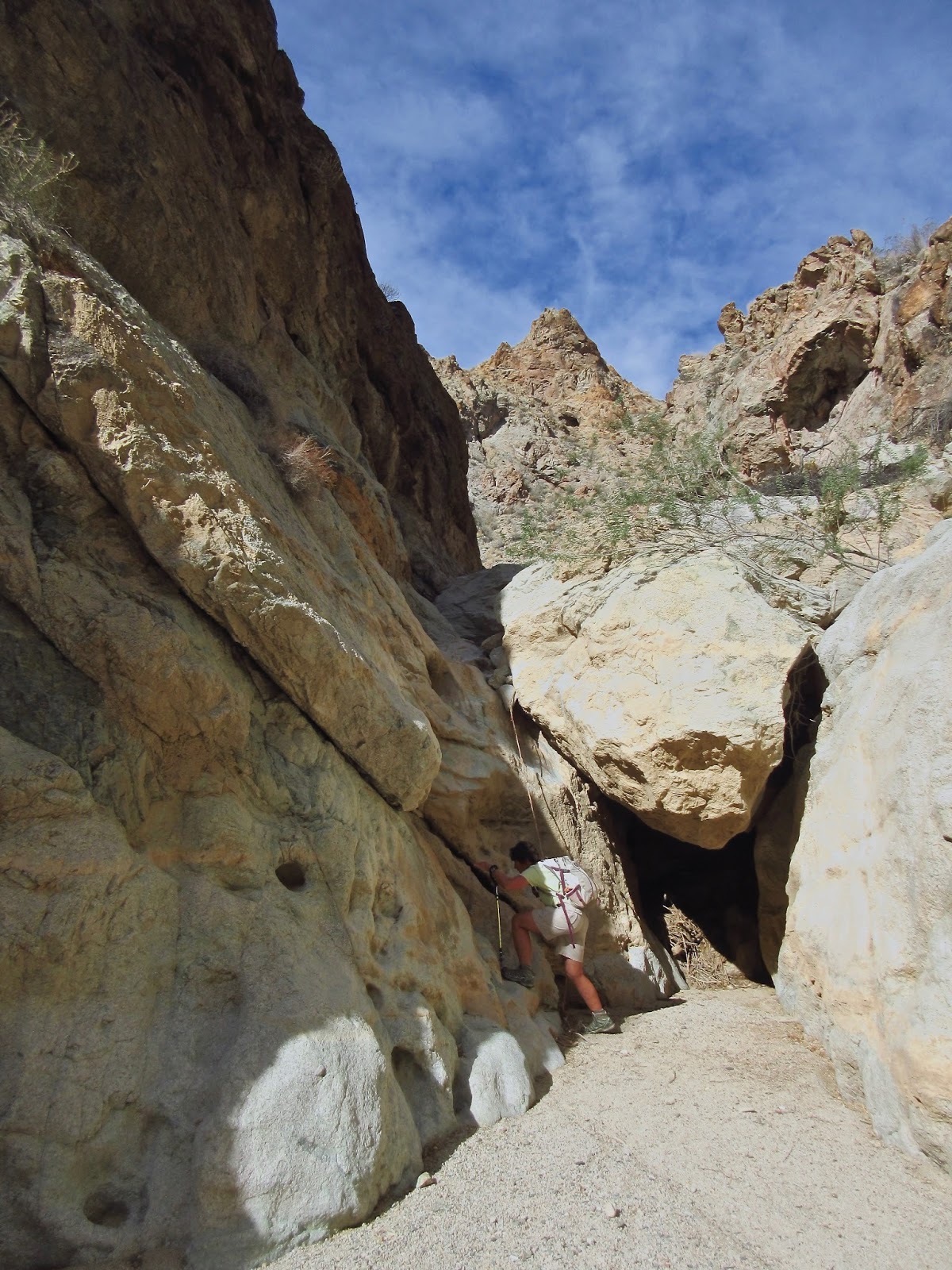 We really wanted to keep going, so Bobbie decided to give it a try. There were slick places where the rock had worn smooth from water flow. It was difficult to get a toehold, especially with my size 14 shoes. Bobbie fared better.

I tried to position myself to break her fall, should the rope fail or the precarious wedge of rocks pulled free. 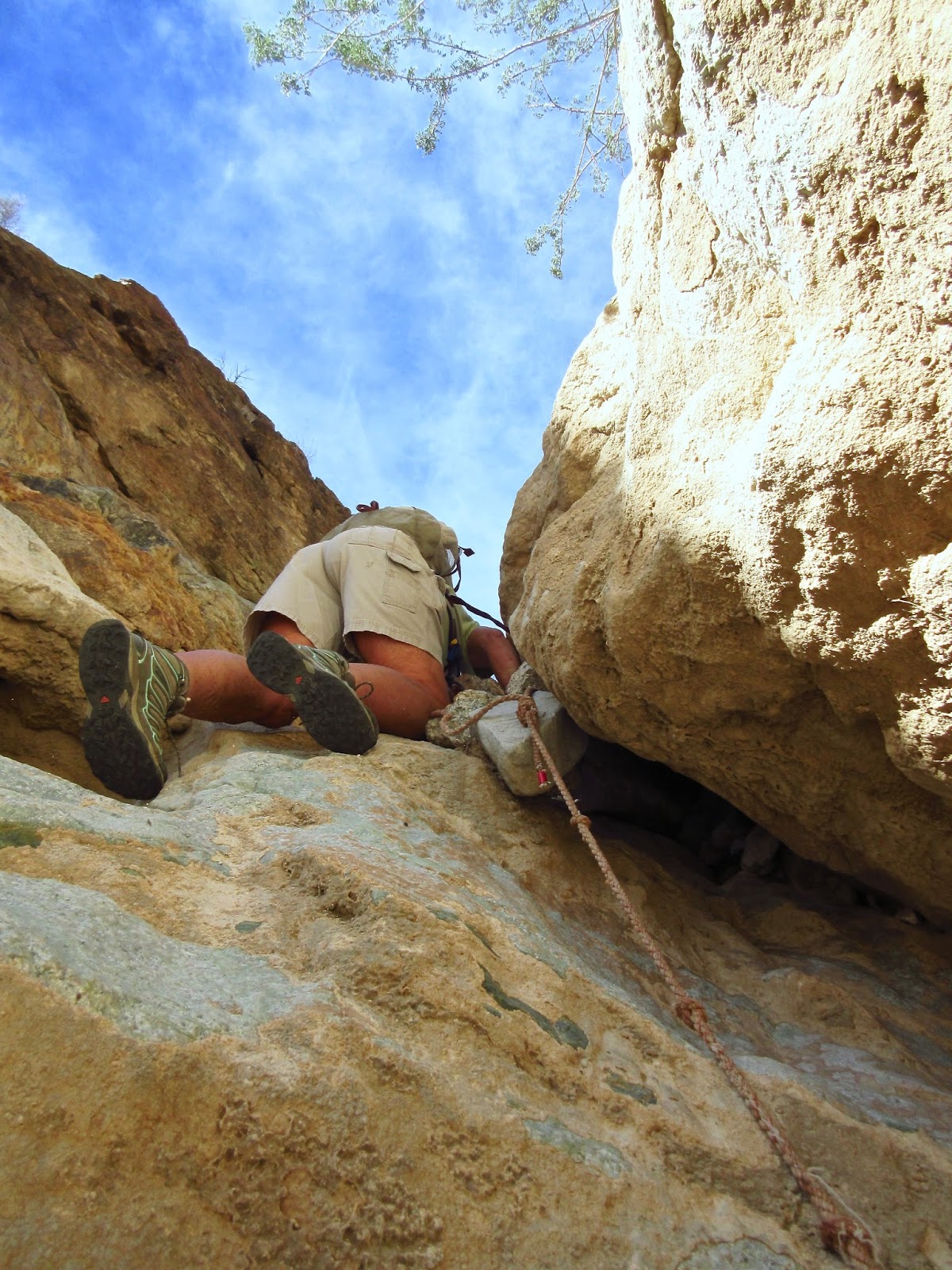 It's amazing, the situations that extraordinary effort and poor judgment can get you into. Bobbie made it up to the next level, alright, then wondered how in the hell she was going to get down. I told her to cross that bridge when she got to it...but in the meantime to go explore up-canyon and see if it warrants me risking a bad rope and poor tie-off. It didn't.

It took a while for Bobbie to figure a way down. In the end she had to trust the rope and rocks...something I wouldn't have done. 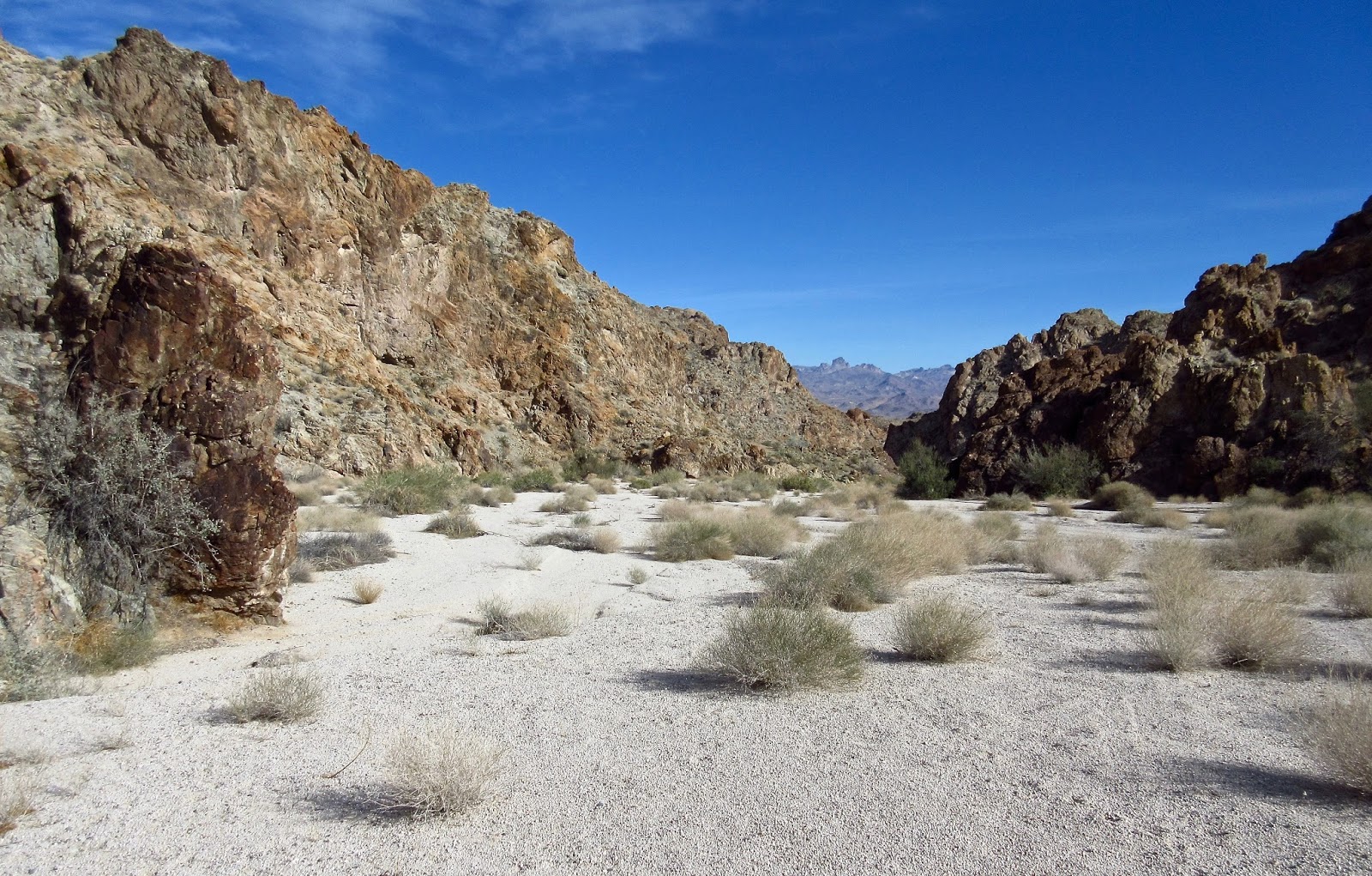 On the way out we decided to explore a side canyon and came across more black seams...wider than anything we had seen. 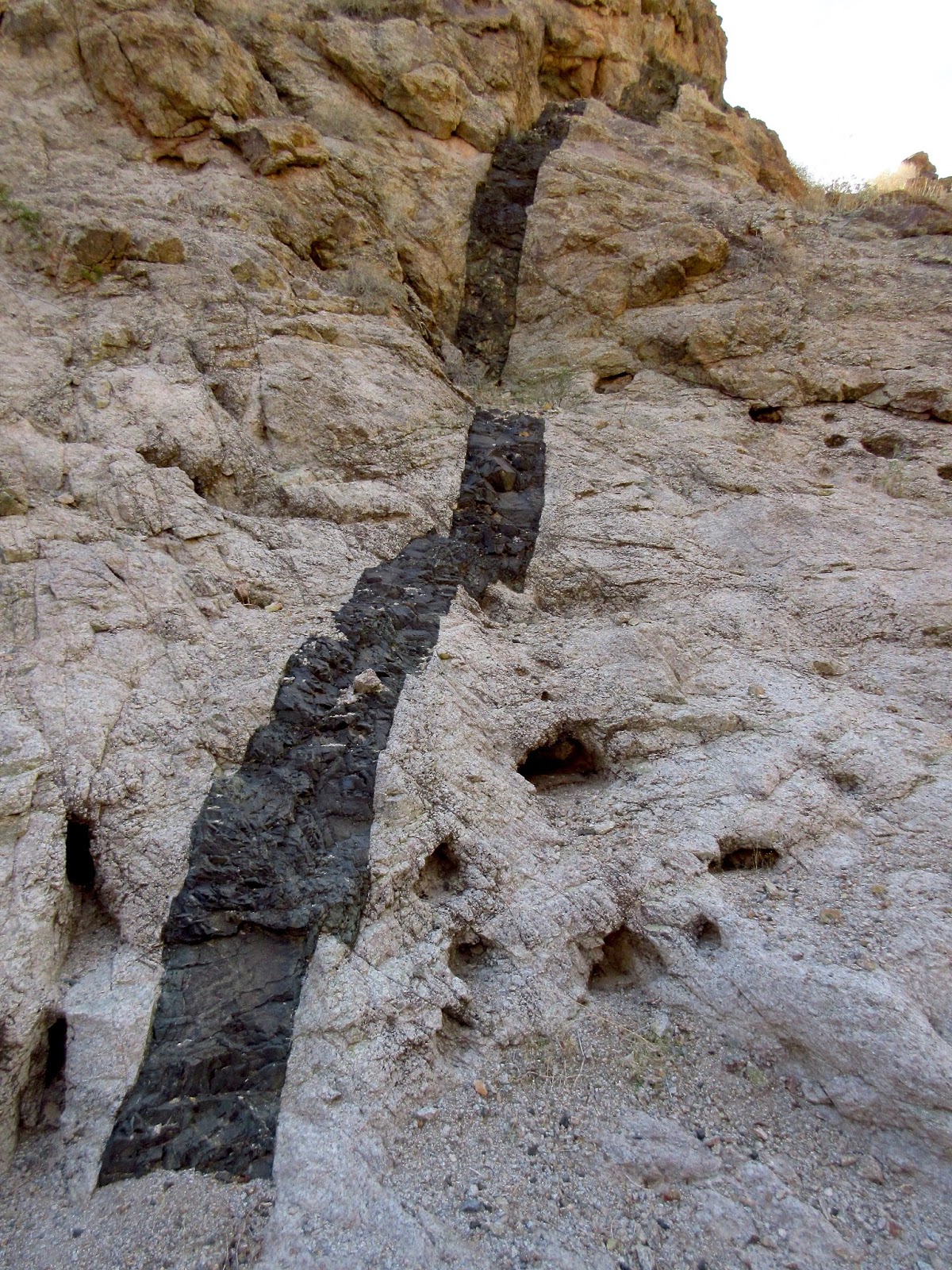 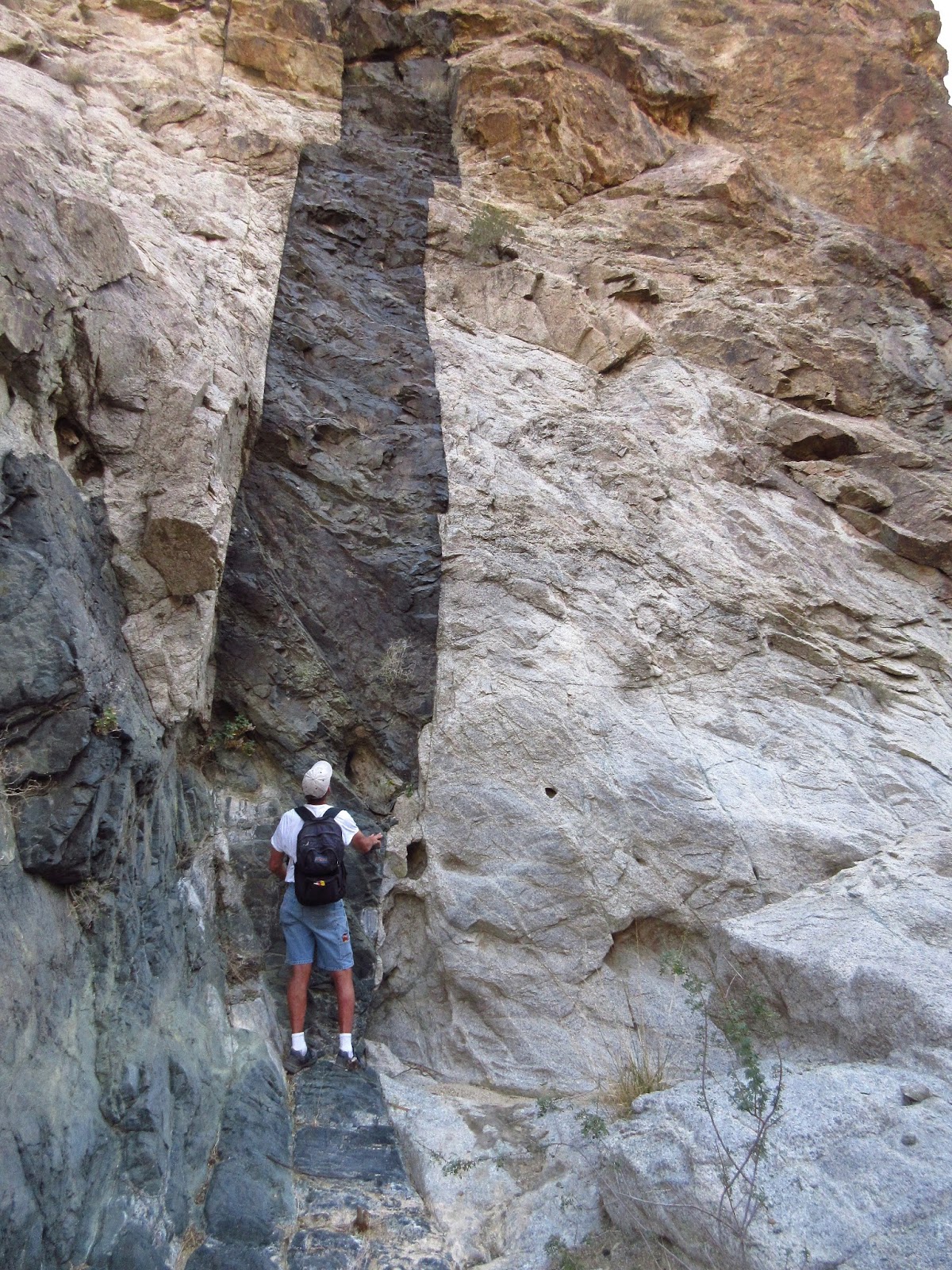 We found a shady spot to have a bite to eat before retracing our steps back to the car. Just another random hike in some random place we've never been before.

Stay tuned as next time we take another stab at finding Grapevine Canyon. Turns out it was only a couple miles from this hike, but oh so different.

Life is Good, even better when you keep moving!
Peace out,
mark and bobbie 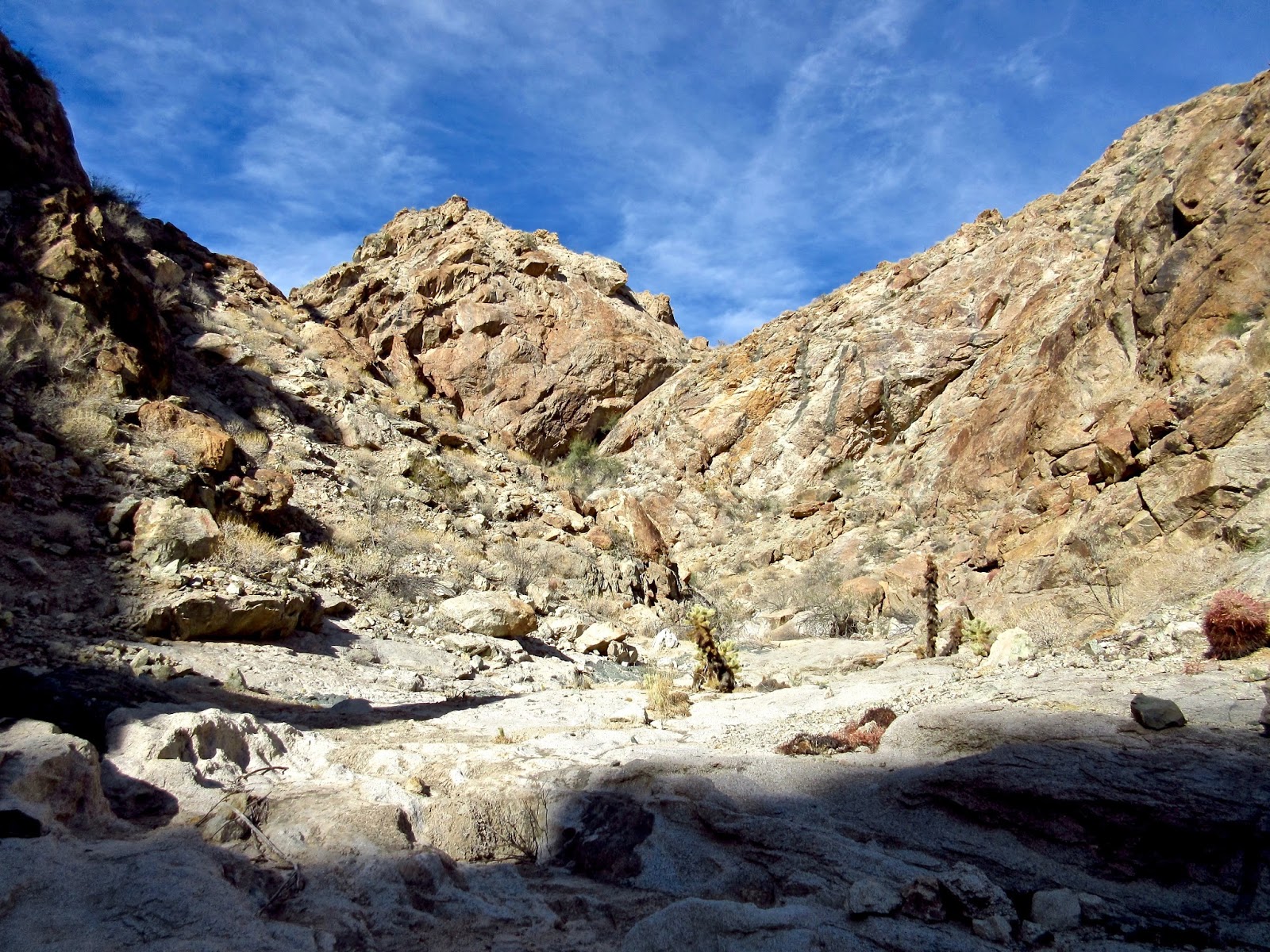 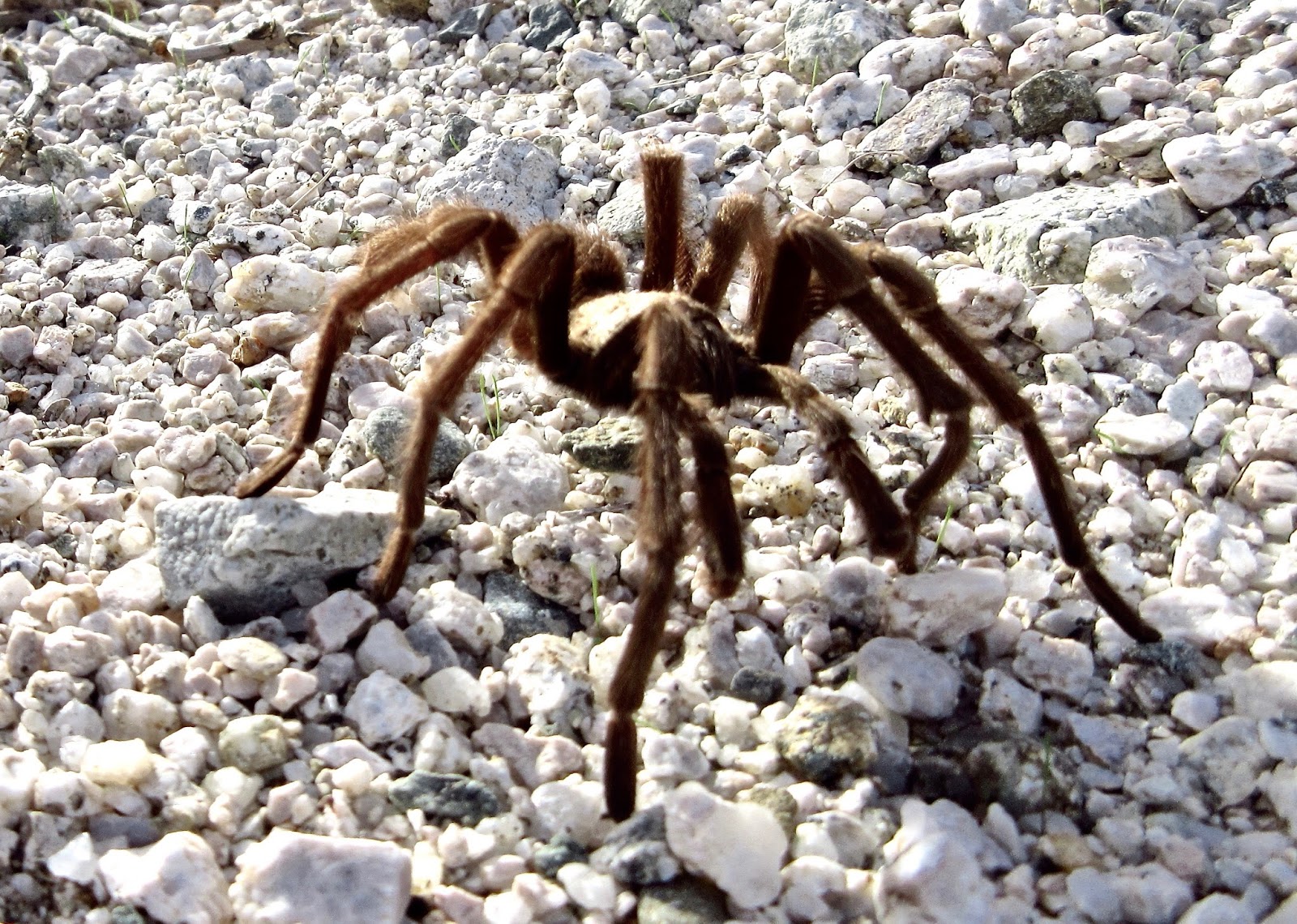 Posted by Box Canyon Blog.com at 9:08 AM