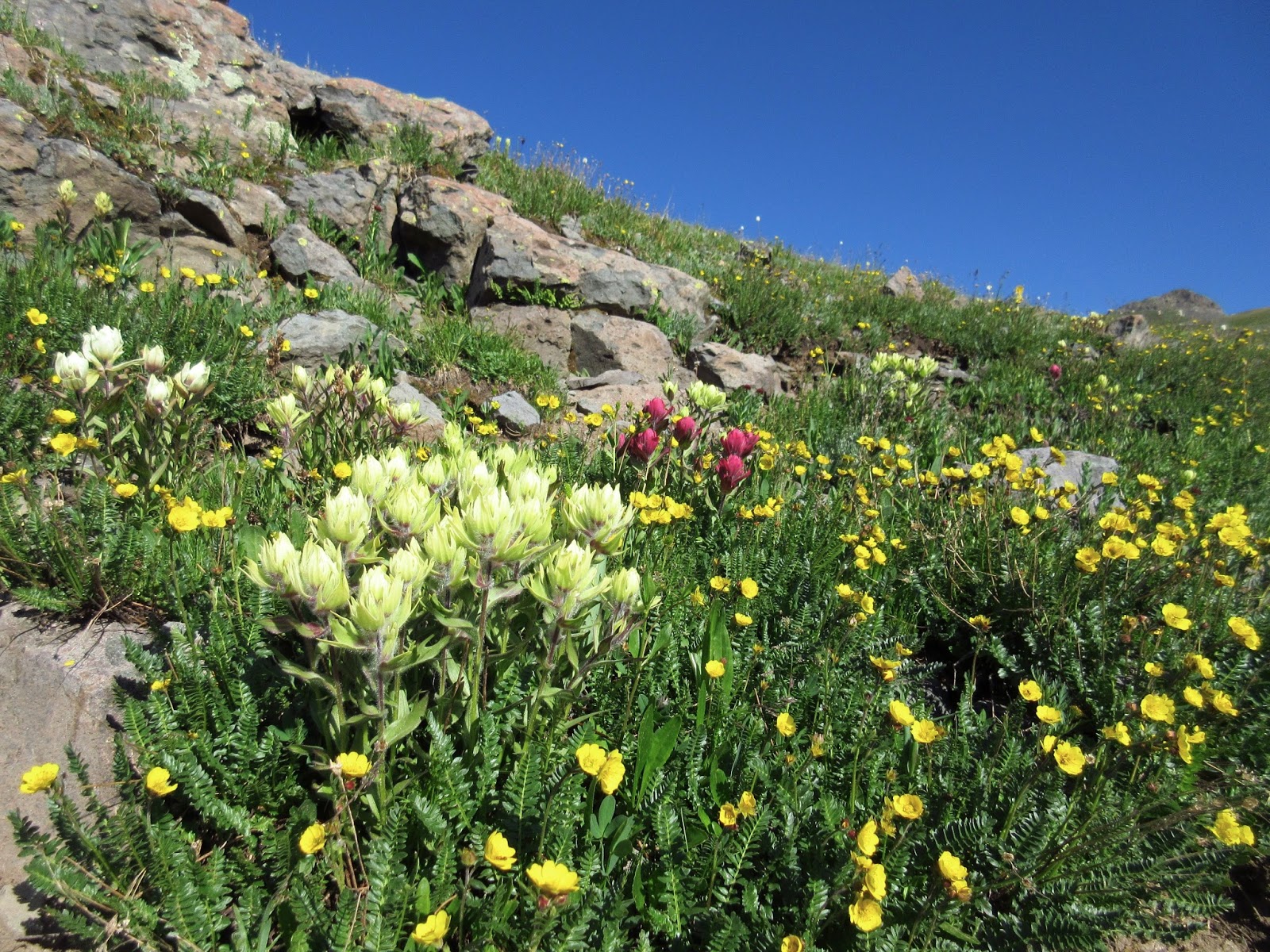 Picking up from the last post, Bobbie and I were studying the precipitous, sun-cupped slab of frozen snow that stood like a raised drawbridge between us and a 13er summit. Undeterred and un-deteoured, I ventured onto the ice in order to test its resilience against attempts to stomp/carve a reasonable path. They were promptly rebuffed, which hatched a kaleidoscope of butterflies in my stomach. I could feel toes trying to clench a grip on the snow through the soles of my boots. One slip and I'm a human bobsled, going for the "gold." 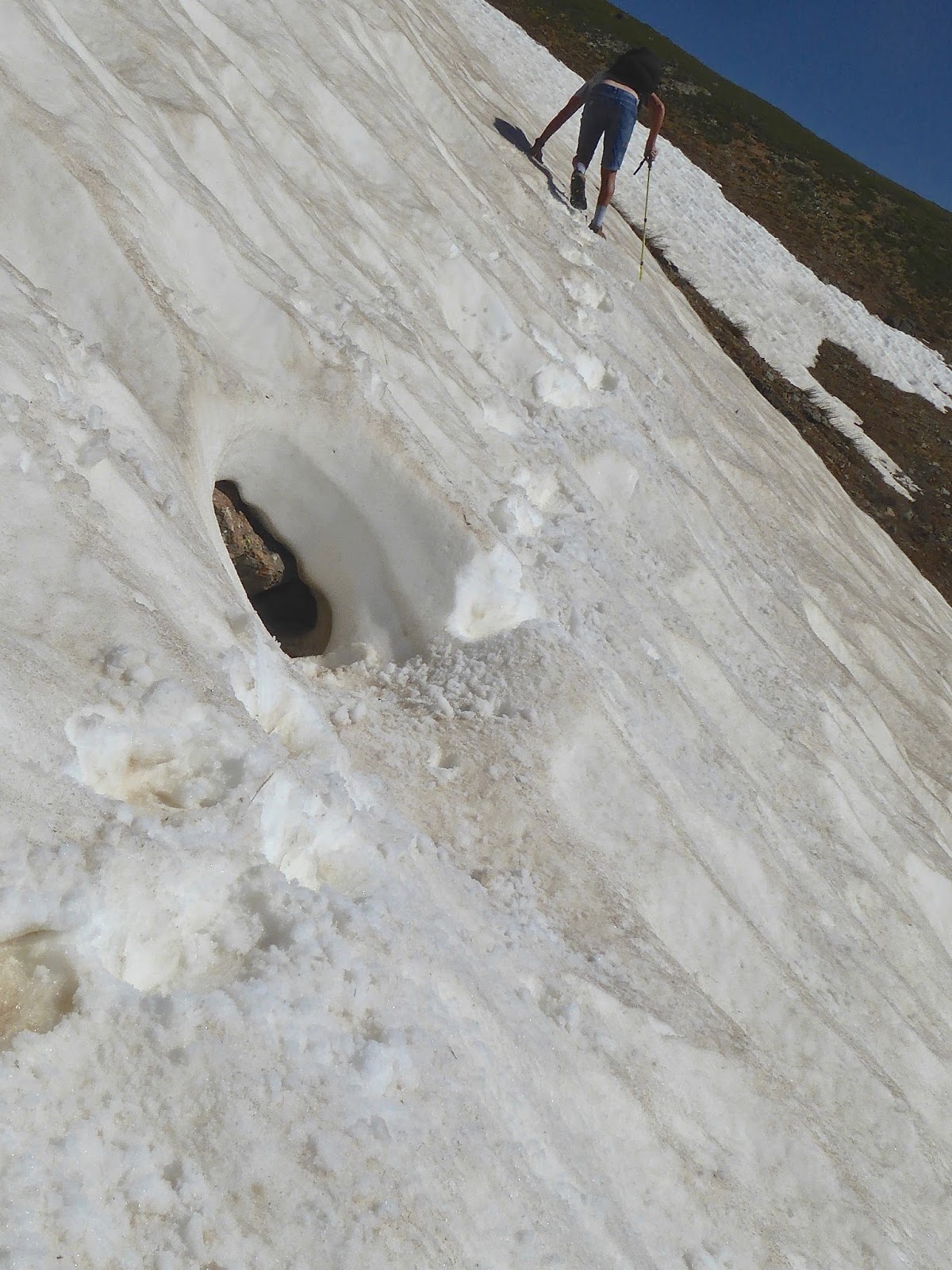 "Our authentic calling, our true work in this world, becomes an outgrowth of our lives. Our work can transform and transcend whatever traumas we survive...turn them into something useful for ourselves and, we hope, for others." Louise DeSalvo, Virginia Woolf scholar

Well, I'm not sure if "our work" rises to the level of "something useful for others." For the most part, Bobbie and I have been fortunate to somehow "transcend traumas" and "survive our work" (which is to say, "play"). We keep putting it out there, be it for vicarious armchair enjoyment or dubious inspiration.

Disclaimer: Most of our "friends" have stories that attest to the "dubious" nature of following our footsteps or bike tracks. Though no one has died (just a few bumps, bruises, and a couple of trips to the ER for bragging rights and precautionary X-rays), past performance is no indication of future outcome.

Being a cautionary agnostic/fatalist, I'd like to believe that "fate" is predetermined...that there is order enough within the chaos of the universe that even I couldn't fuck it up. Merriam-Webster draws an ornery but interesting distinction between fate and destiny. Though both infer "a predetermined state or end," fate implies an inevitable, usually adverse, outcome, while destiny implies foreordination, i.e., a great or noble course and end.

This unnerves me somewhat because I love the ring of destiny over fate; it sounds so noble. In the end, I fear my cavalier outdoor swagger and/or lack of planning will skew the verbiage of my epitaph toward the fate category. The best I can hope for is that someone found my "work" interesting.


Relieved to have "the crossing" behind us, we were free to concentrate on bagging our 13er. As we drew near, however, the approach that looked easy-peasy from afar suddenly reared its ladder-like verticality. Man, it's always something. Ultimately, it wasn't so much dangerous as it was onerous, especially to quads, still quaking from crossing that precipitous bobsled run. 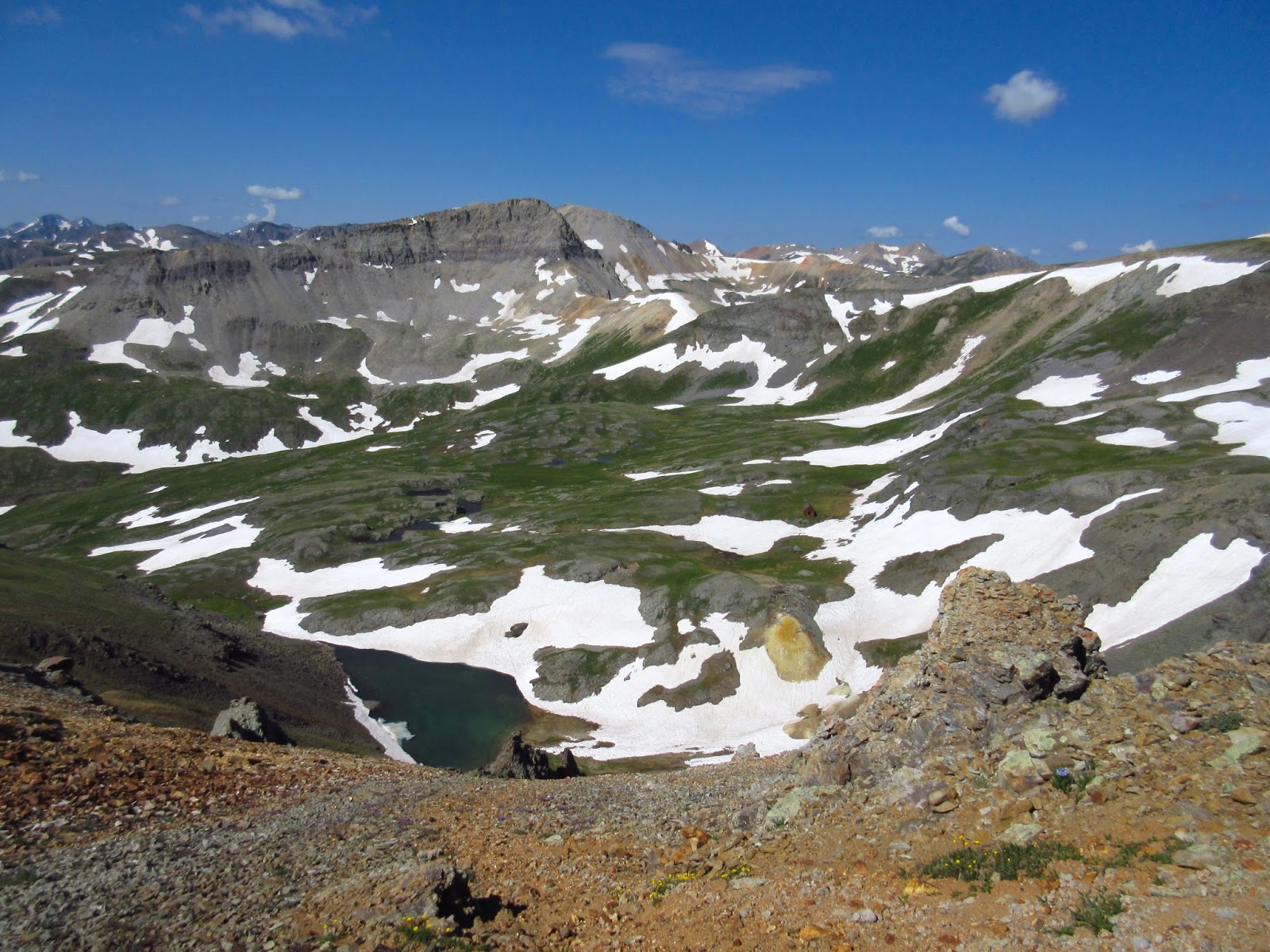 Once on the ridge, we were rewarded with spectacular views of Senator Beck Basin, glacial lakes, and Trico Peak. Not a soul around for miles and miles, and only a few puffs of clouds...slowly building into cumulous skyscrapers. But the summit beckoned, just a short rock-scramble and we would add another 13er to our collection. 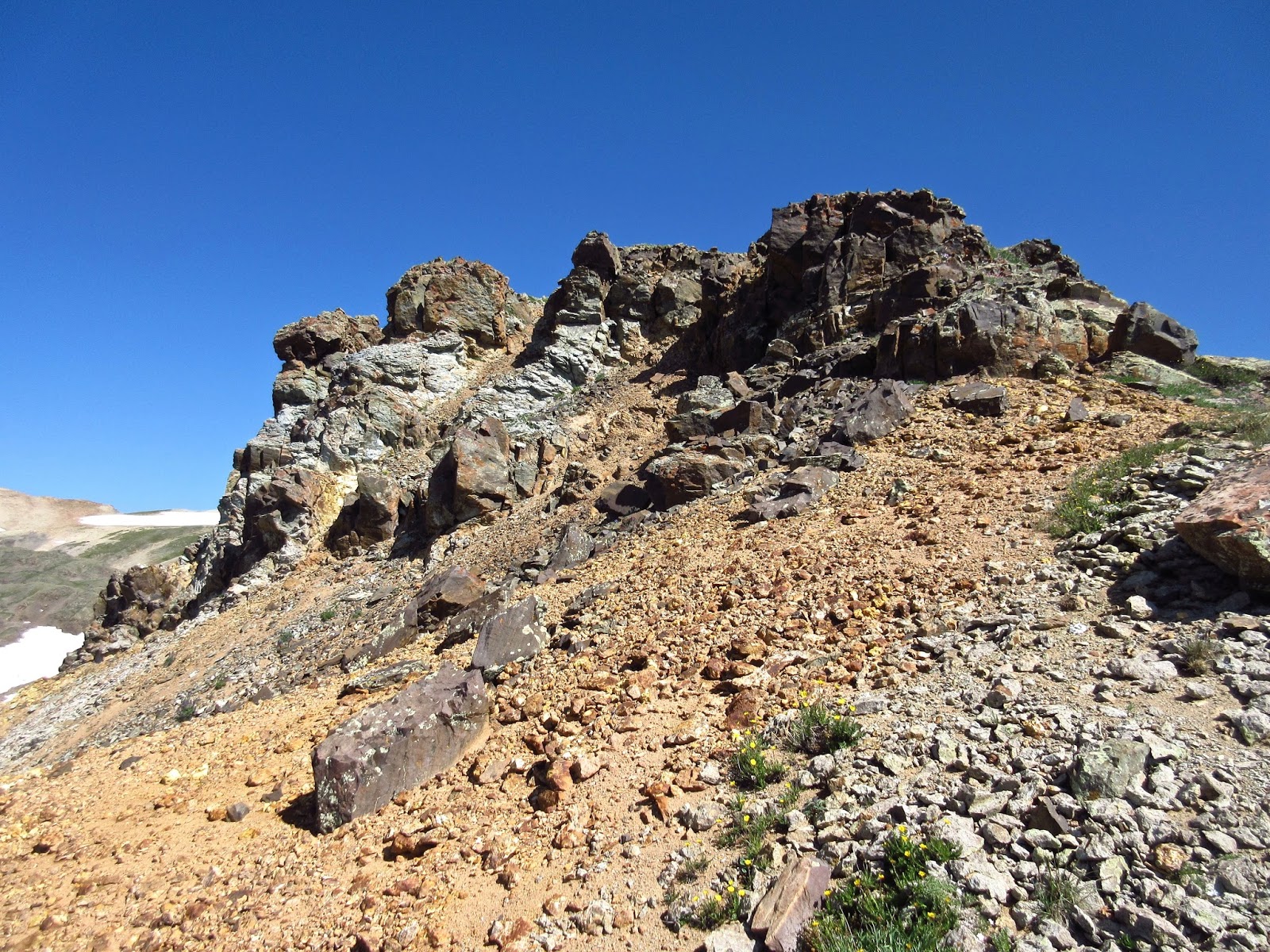 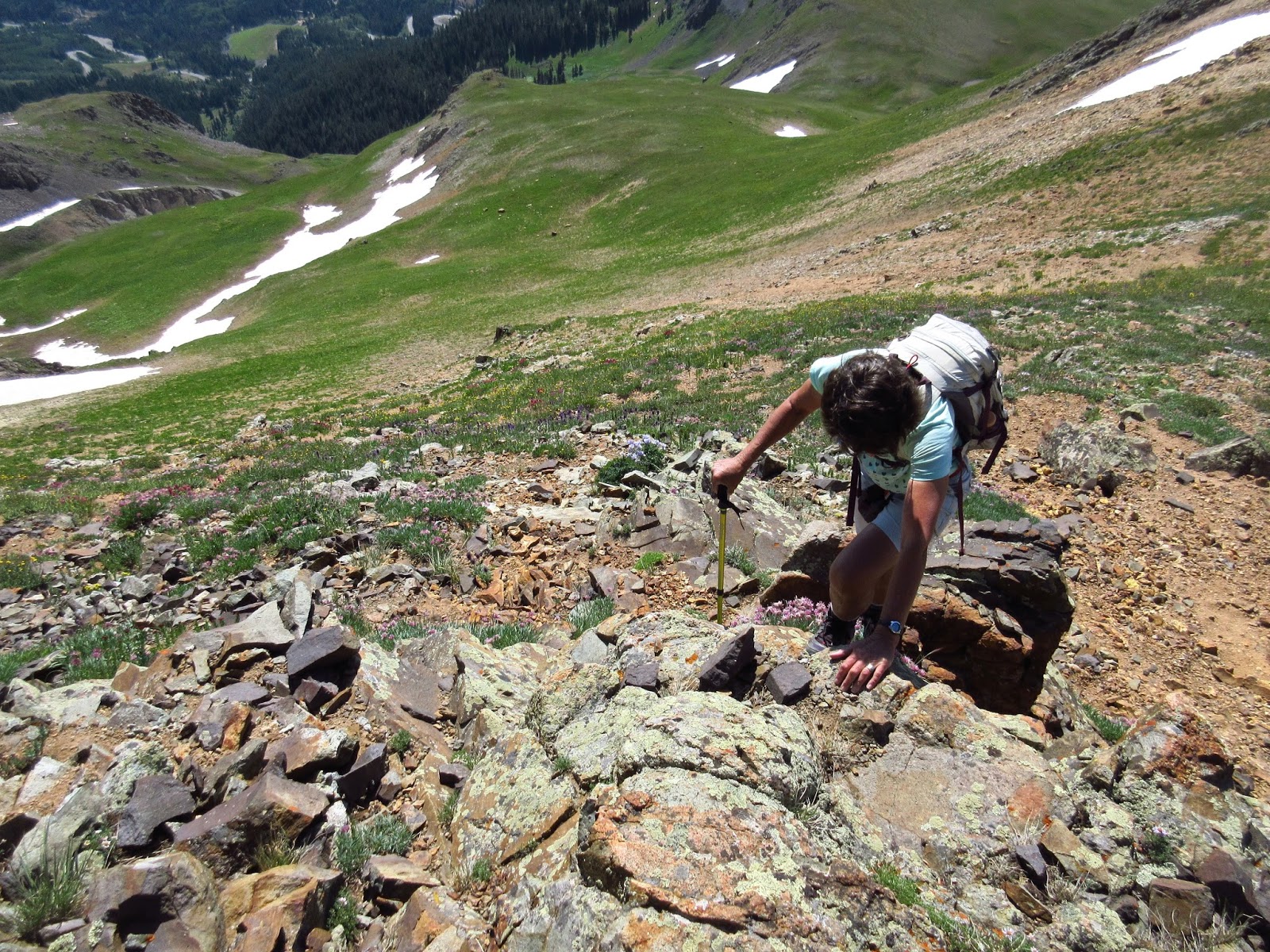 The rock-scramble was like "eating cake," especially after enduring "the crossing" and subsequent long ladder climb to the ridge. Once on top, we plopped down and took a well-deserved break, eyeing 360 degrees of soul-filling solace, solitude, and serenity. 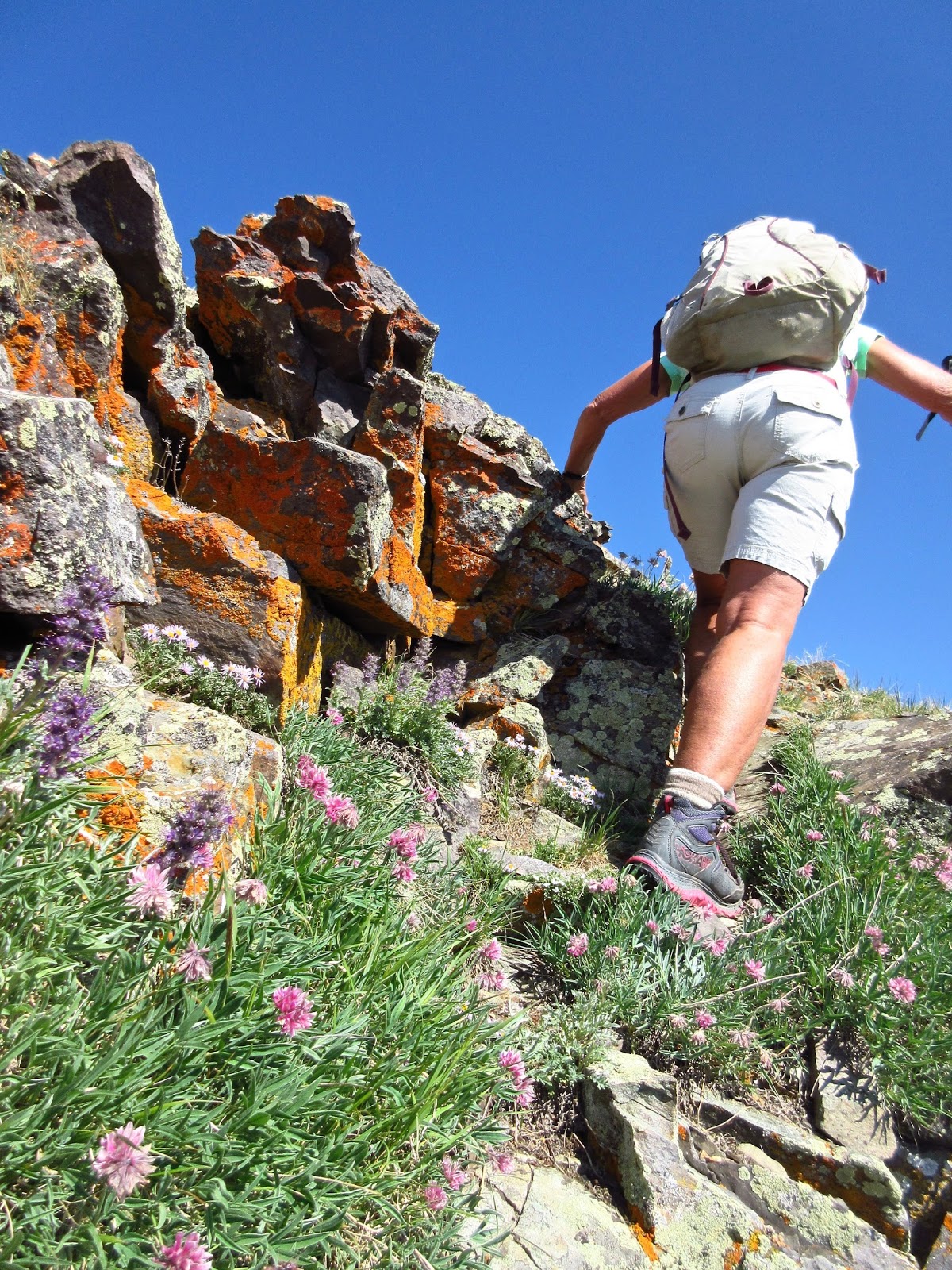 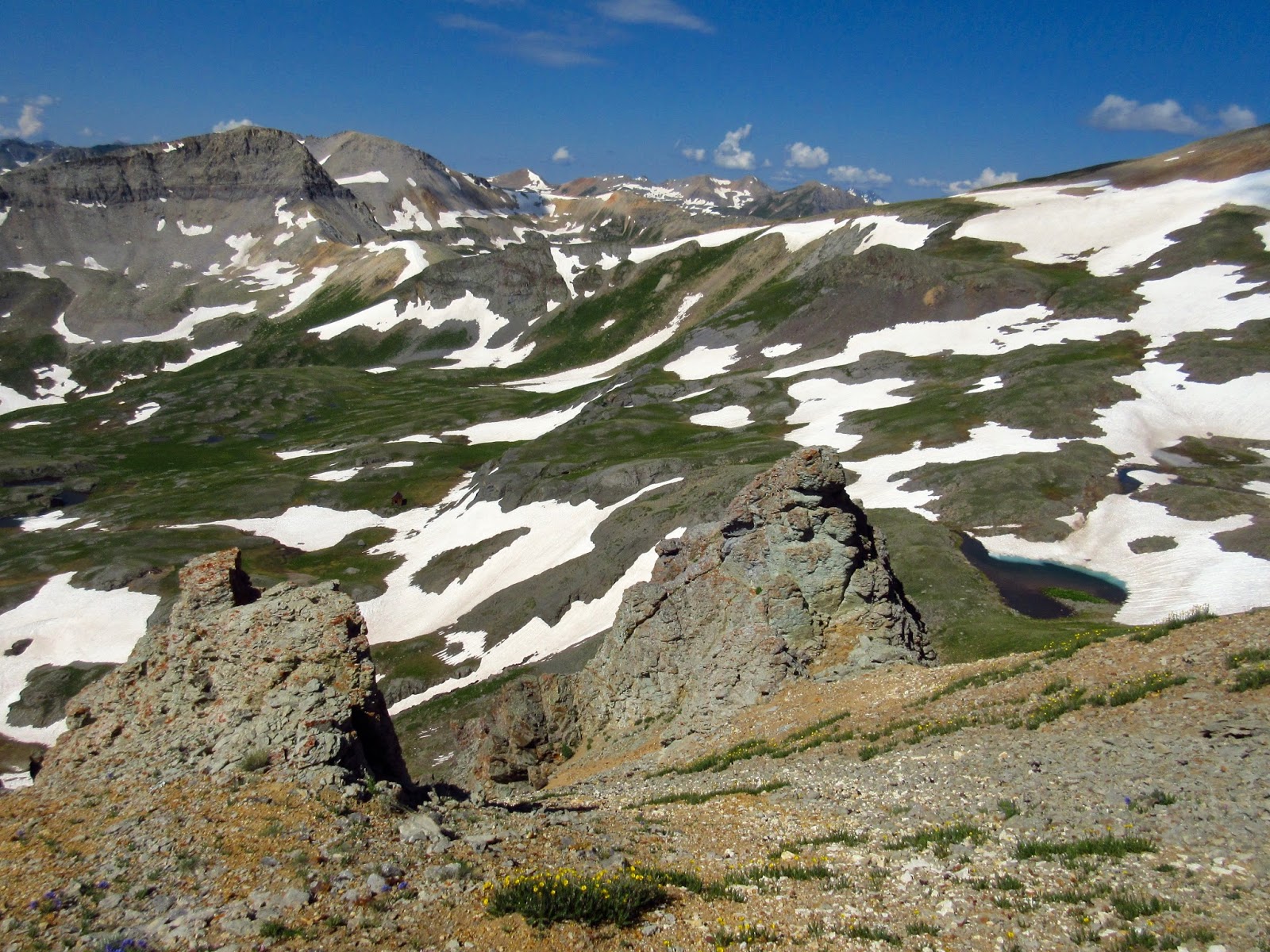 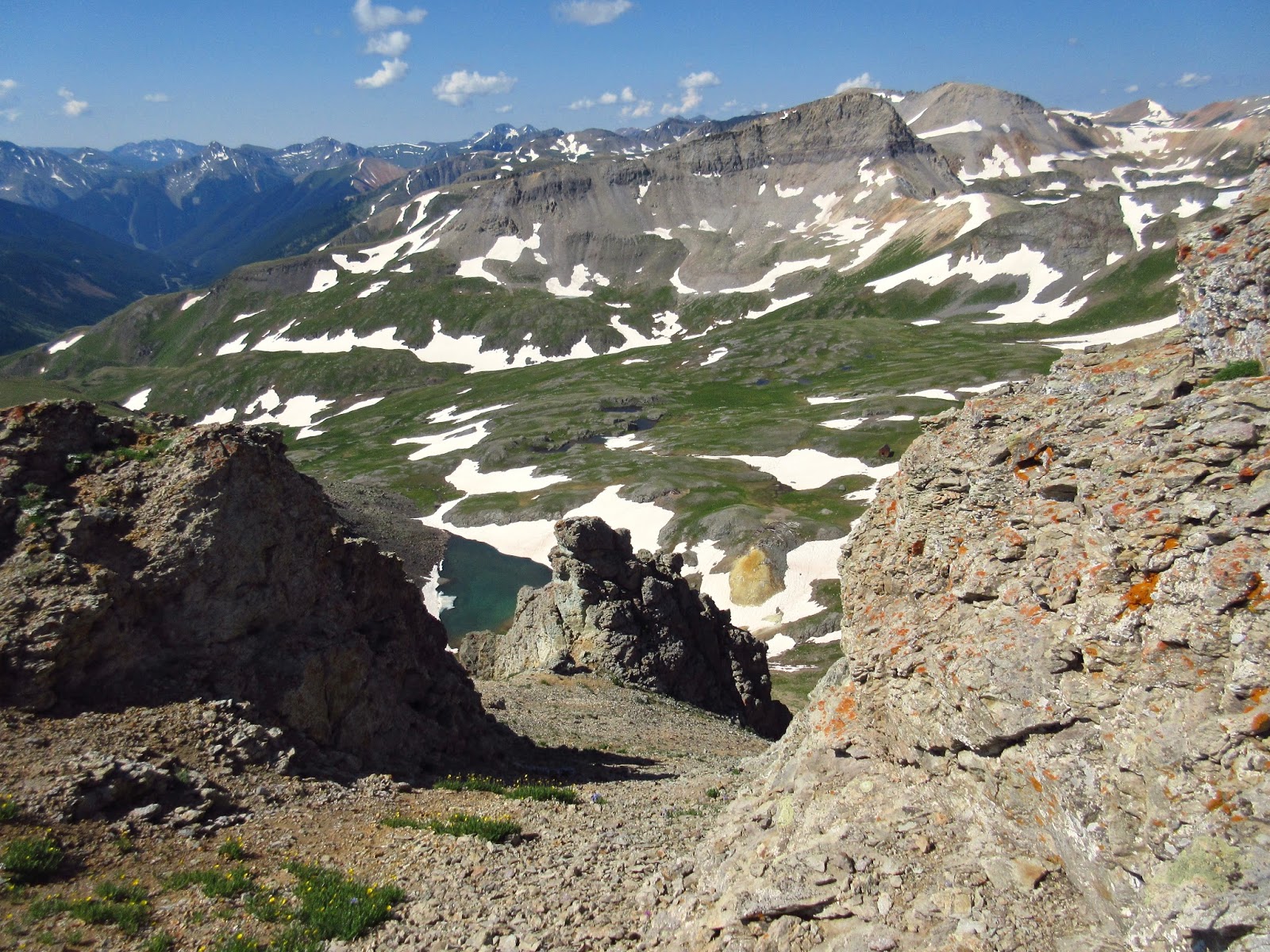 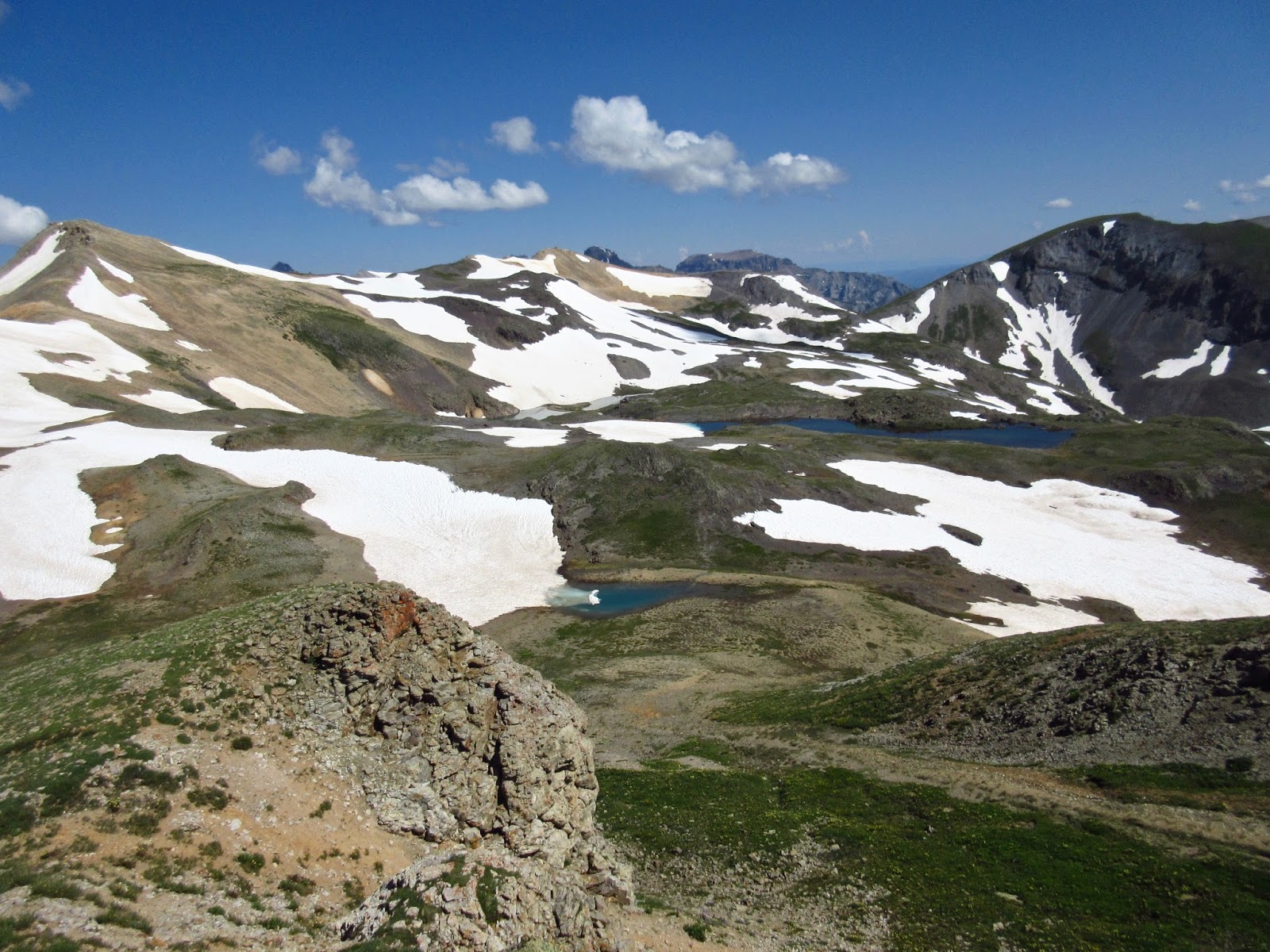 Ptarmigan Lake, our usual destination beyond Beck Basin, was still a good ways off. Our new route had added distance and time, thus the decision against pushing our luck with a sketchy forecast. Refreshed by carbs and rest, we began to bushwhack our way down... back through the wildflower zone, skirting glacial lakes, remnants of snow, and wading runoff.

It was punishing work going down, riding the brakes hard with every step. Perspiring, I removed my old salt-stained hat and used it to mop sweat from brow and eyes. I chuckled at the Life is Good logo, now sun-faded and frayed to near illegibility.

A while back, after a couple of years on the medical merry-go-round, I began purchasing and wearing ball caps with the "Life is Good" logo. I needed to be reminded that, in spite of life's potholes, I should try to appreciate that I still have a "pulse," where I live, and what I can still do... in spite of having had one foot in the grave. That I need to be reminded, well, I suppose it says something about the persona non grata side of my personality.

But on days like this, when we add a few "dot's," roam new territory, sense the familiar tingle of adrenaline, and grind out a summit with curve-of-the-earth views, I don't need no stinking "Life is Good" hat. 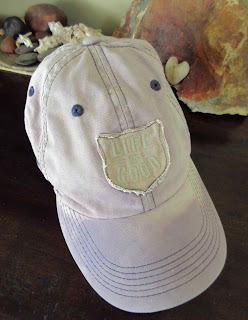 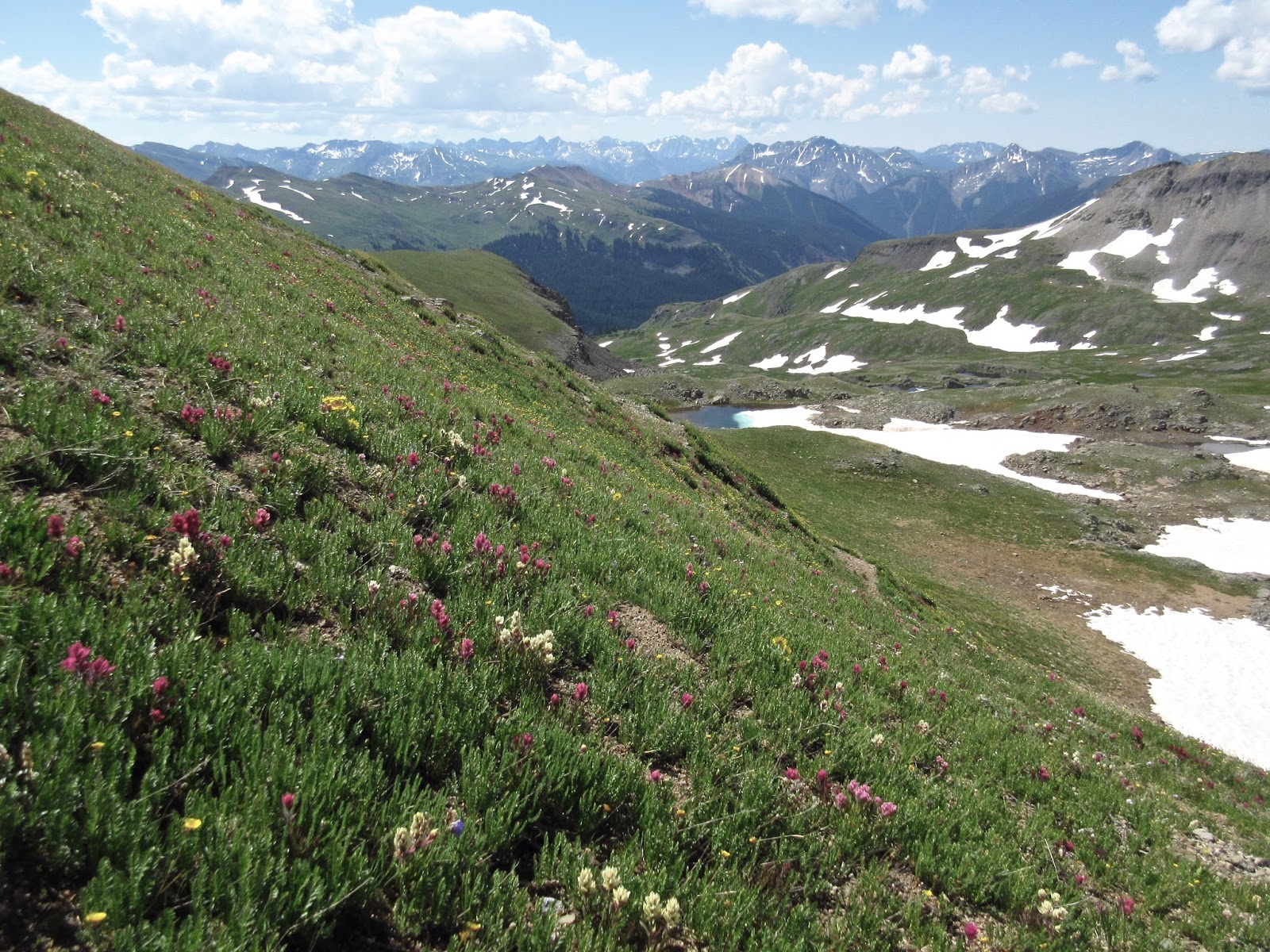 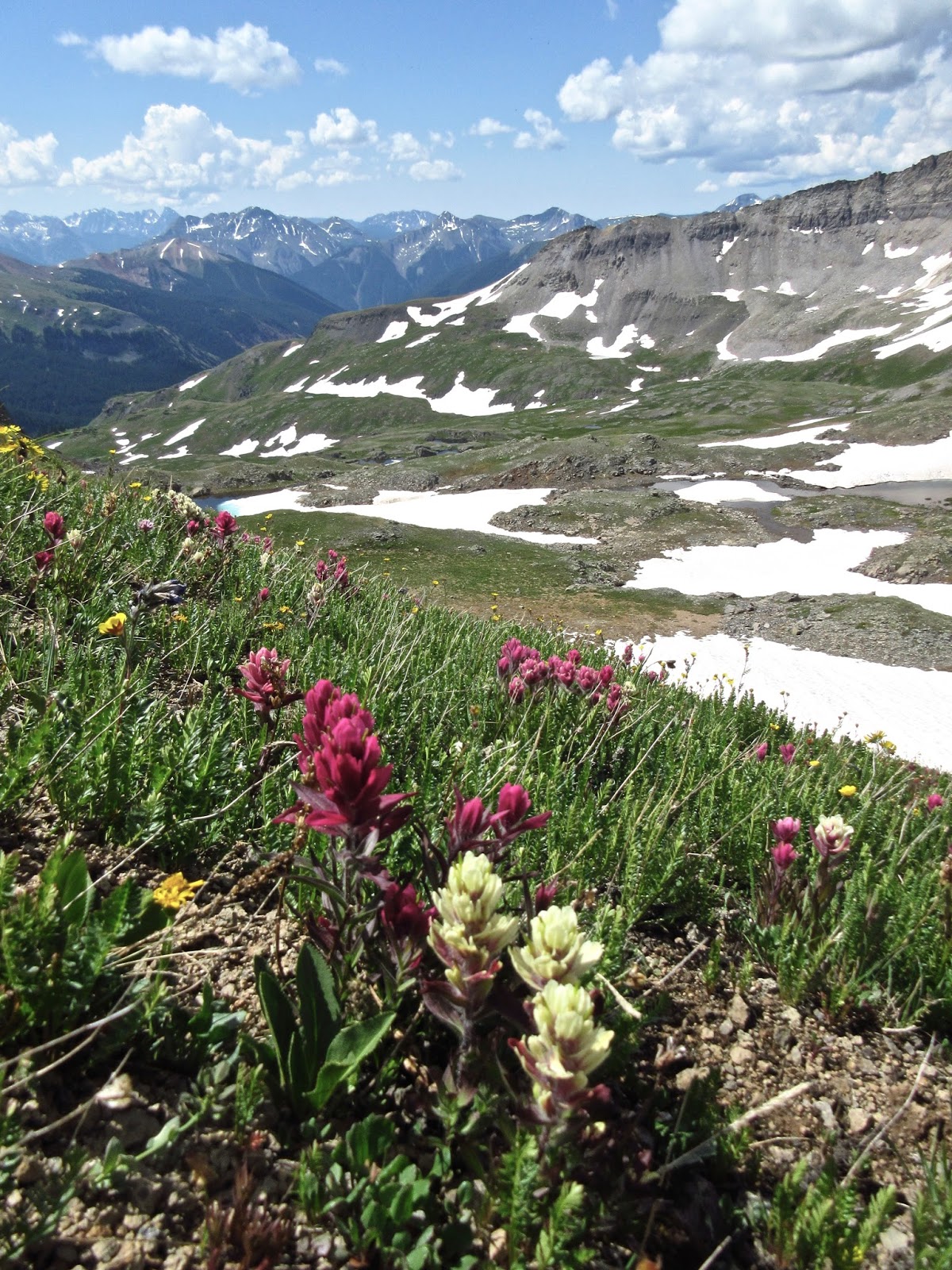 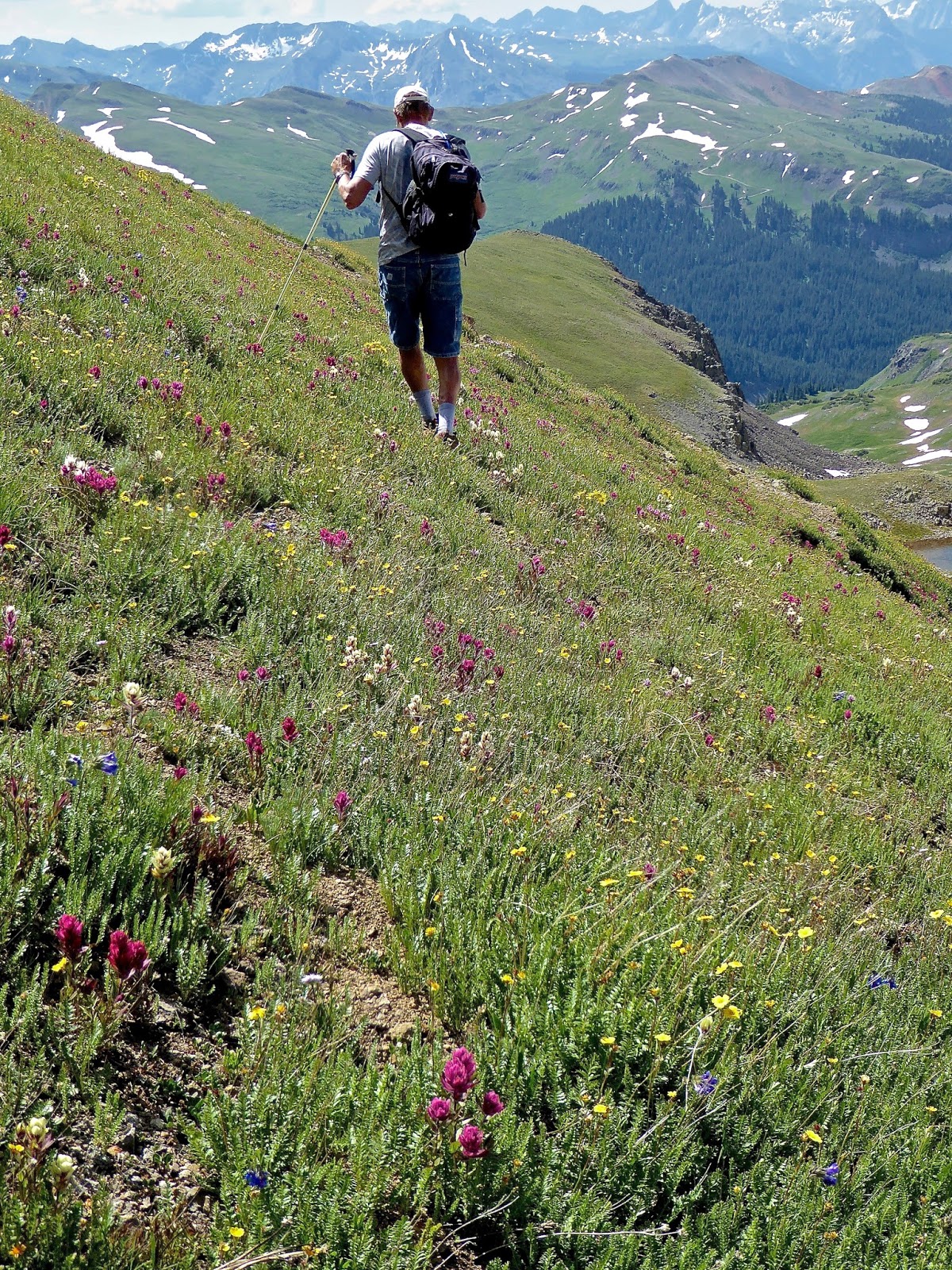 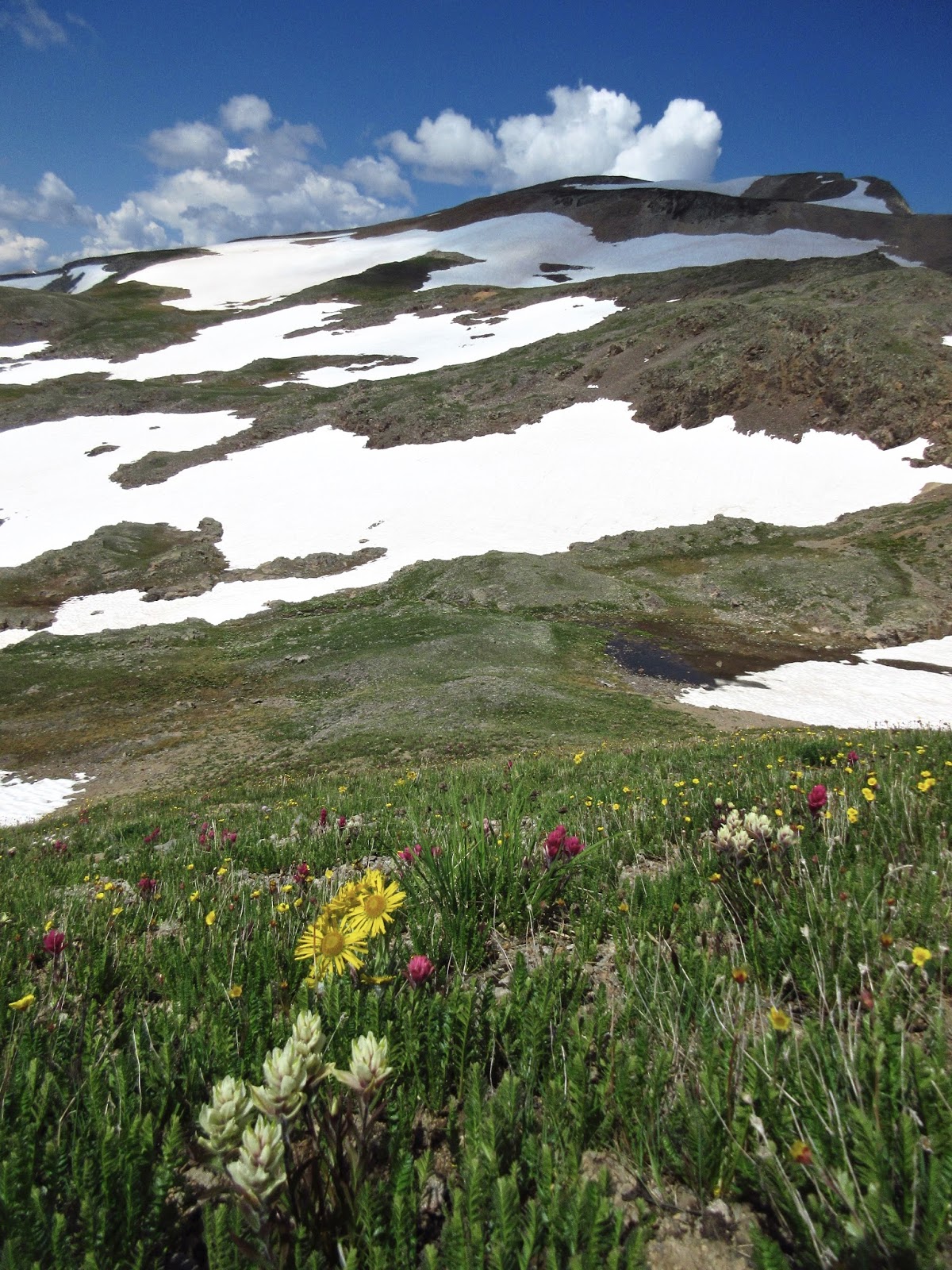 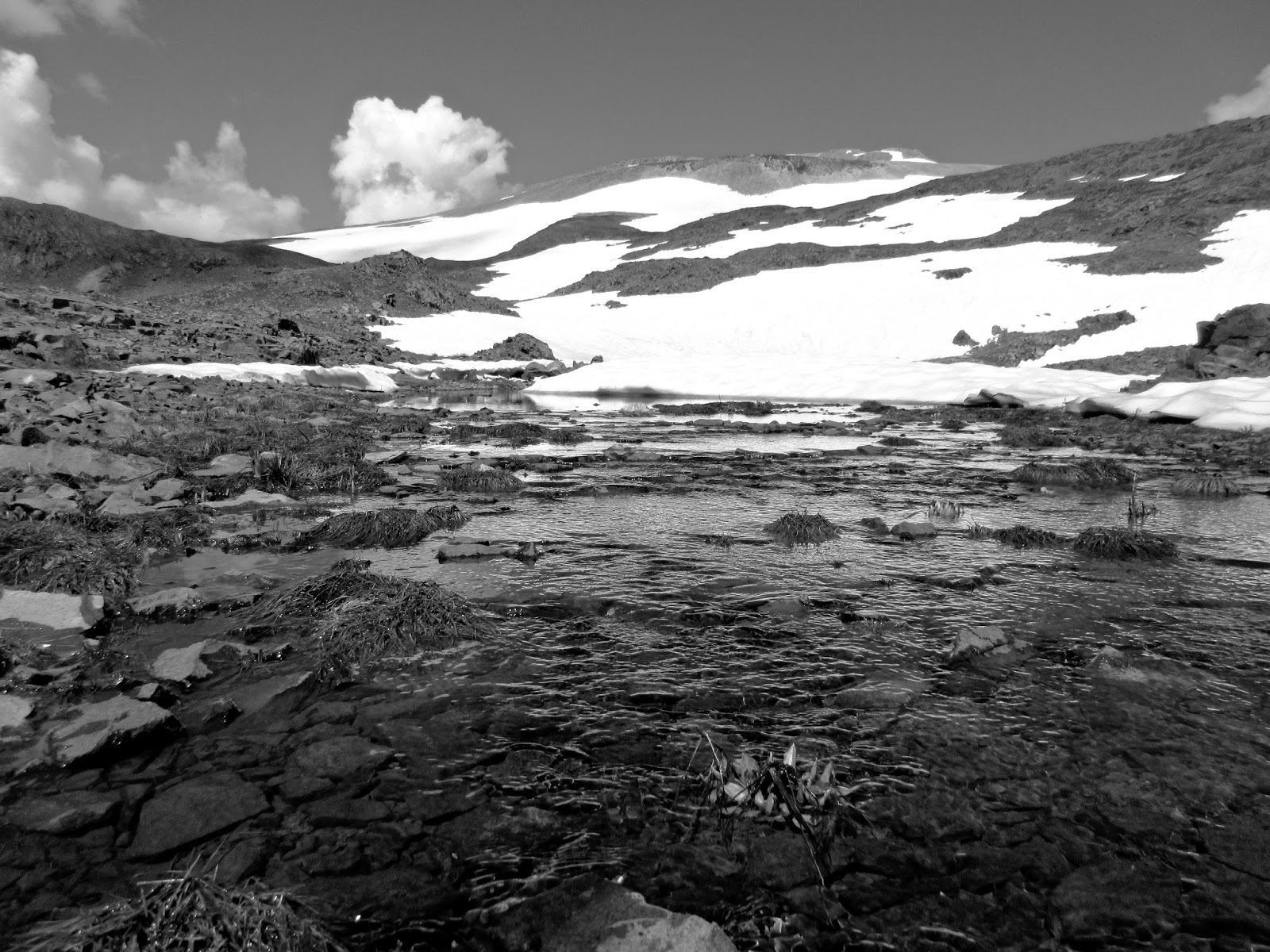 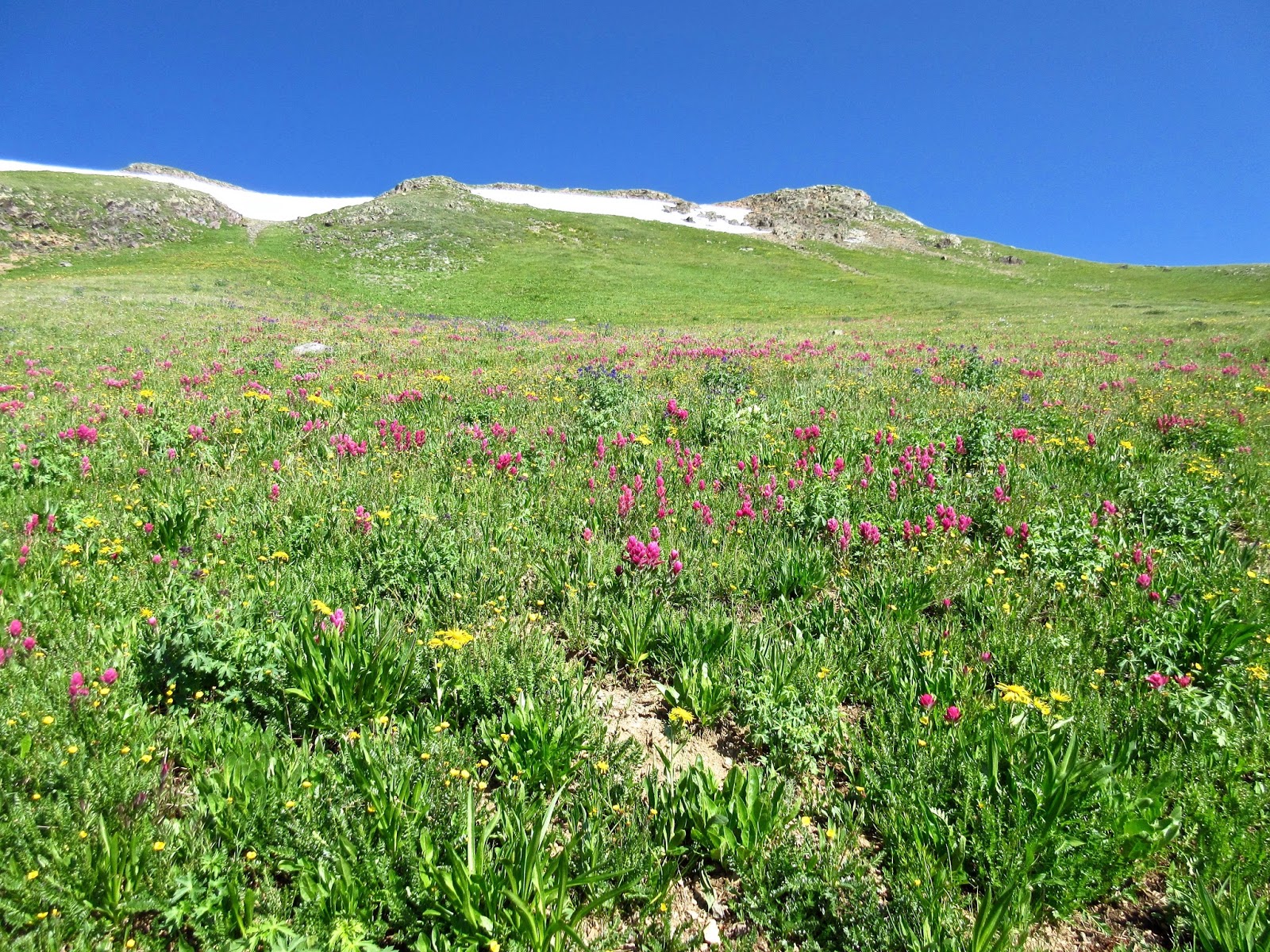 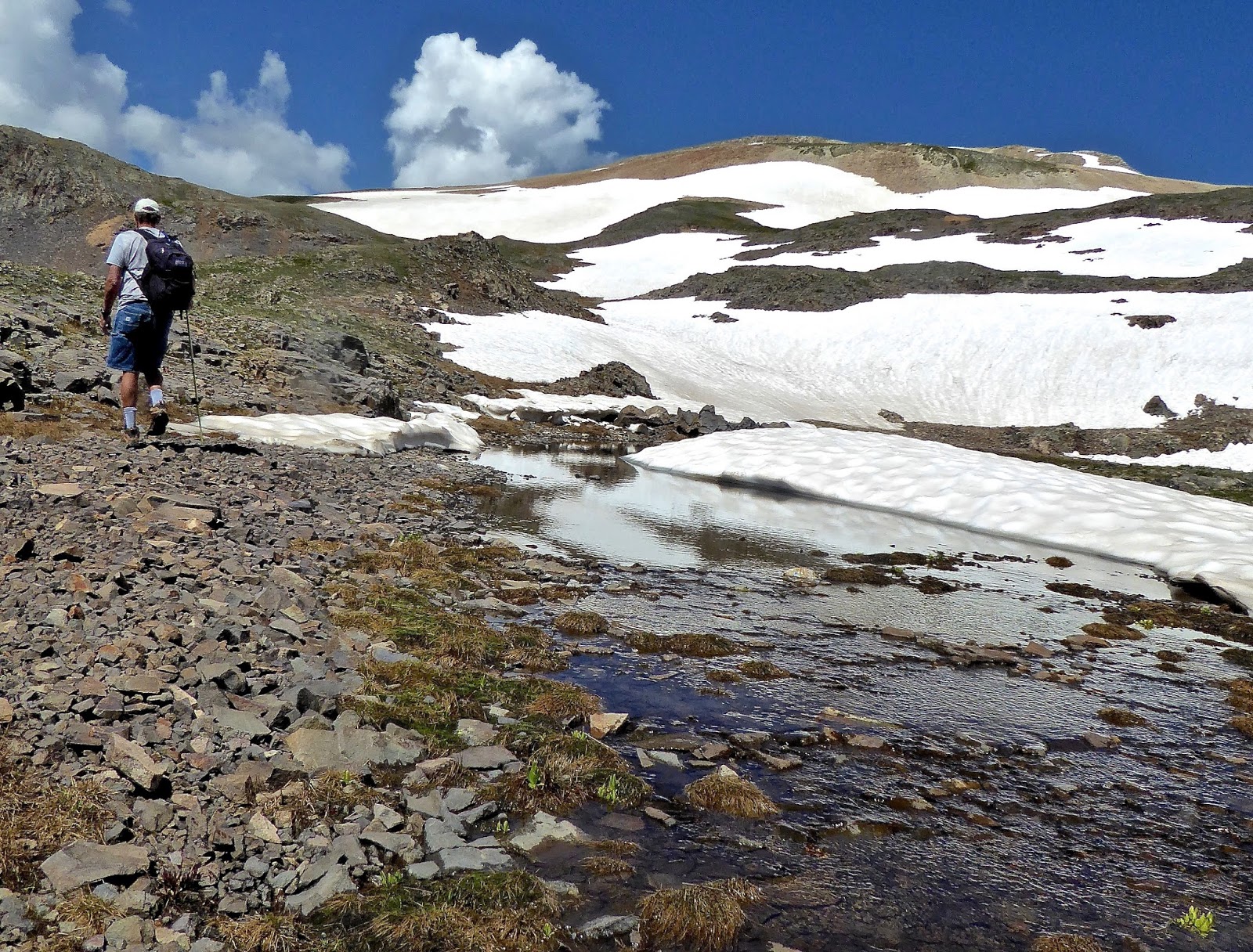 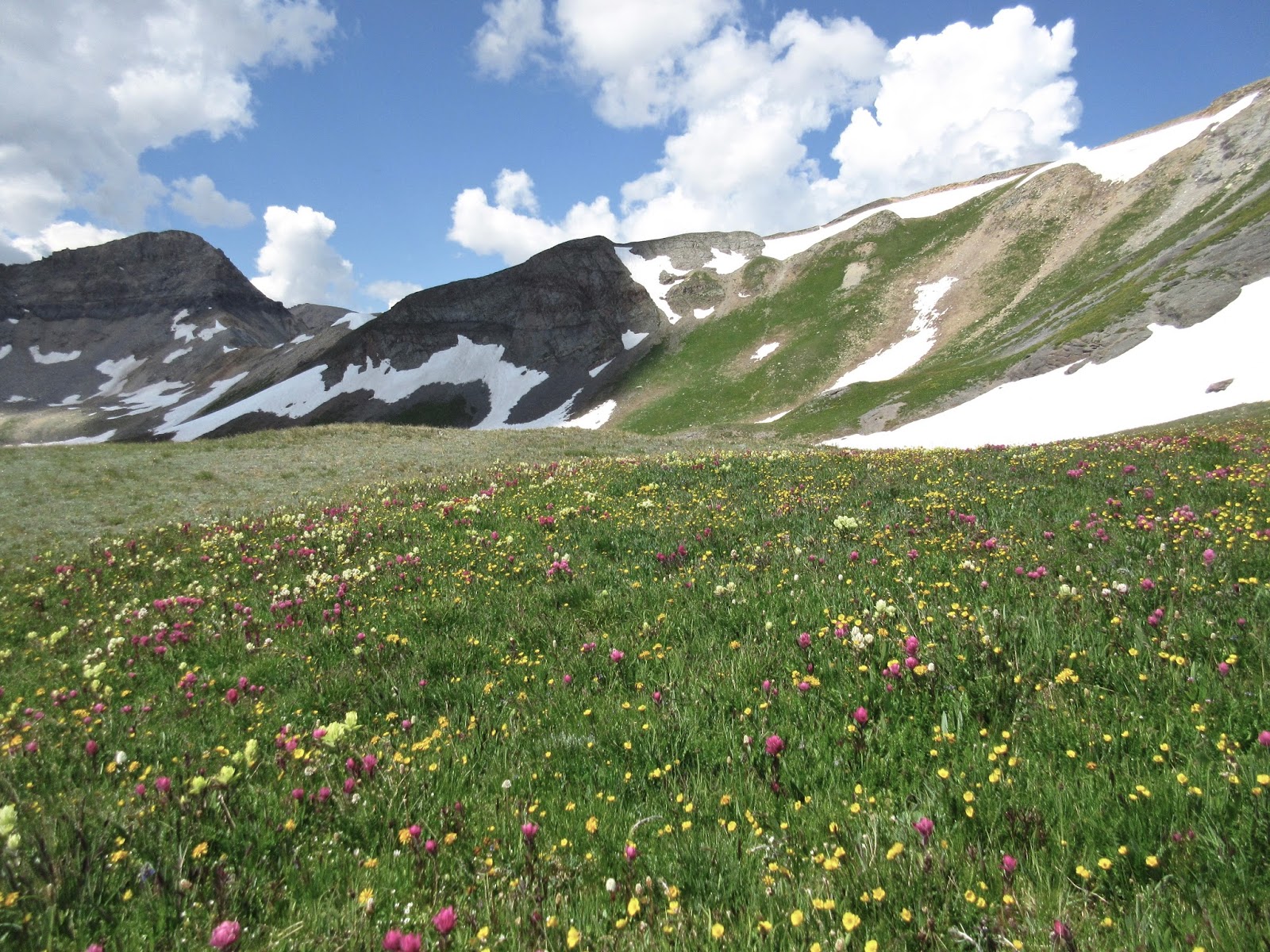 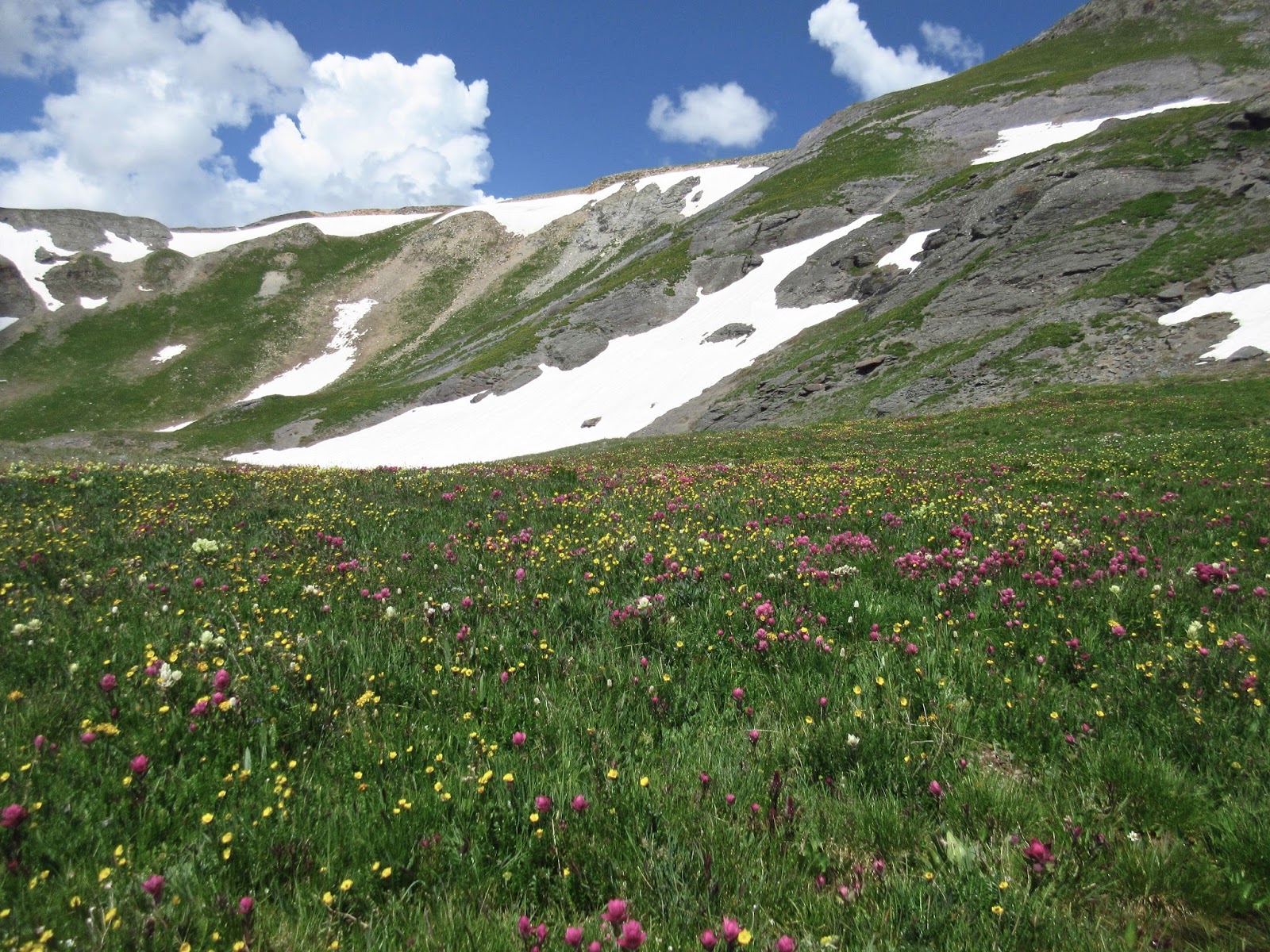 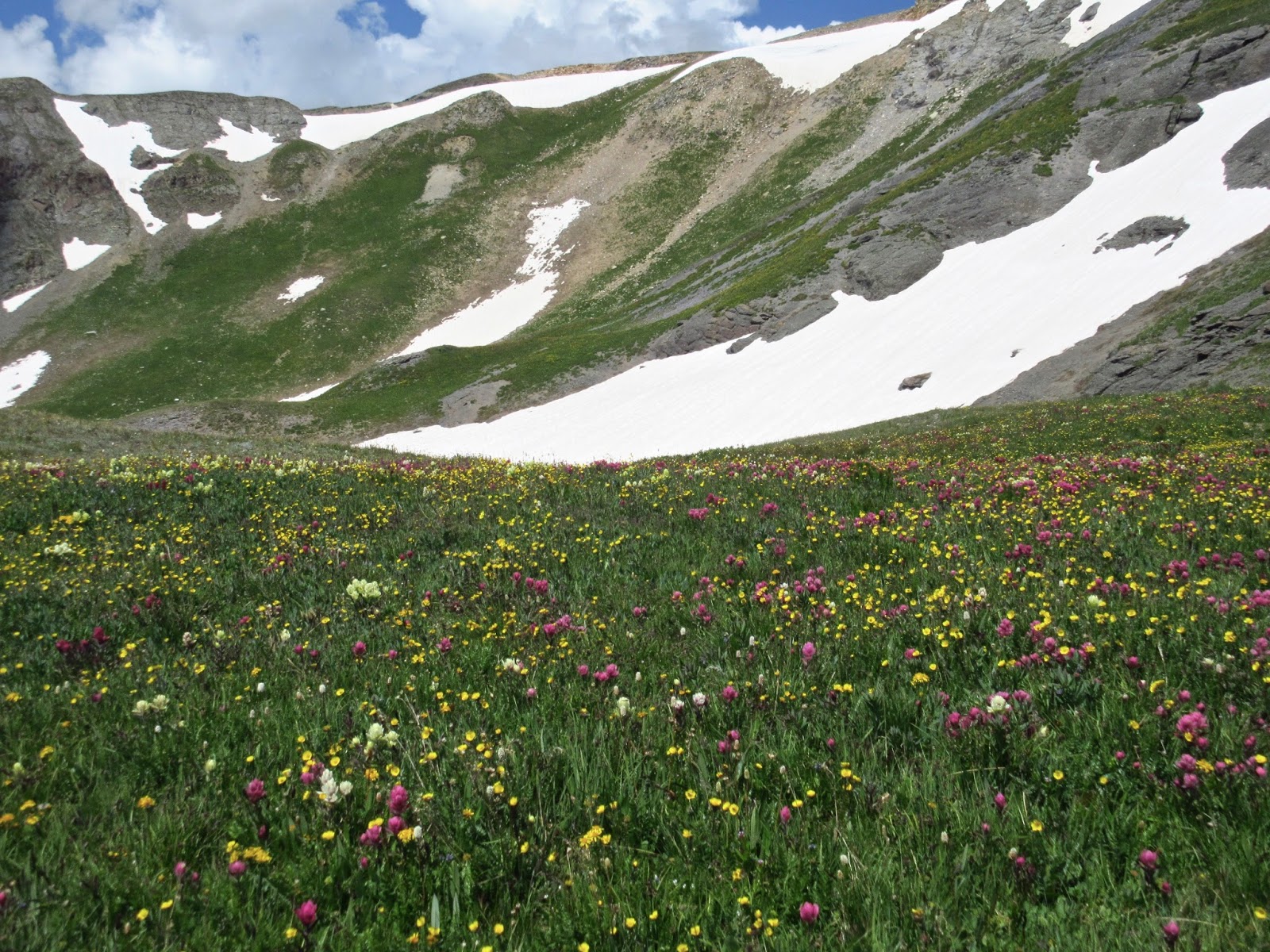 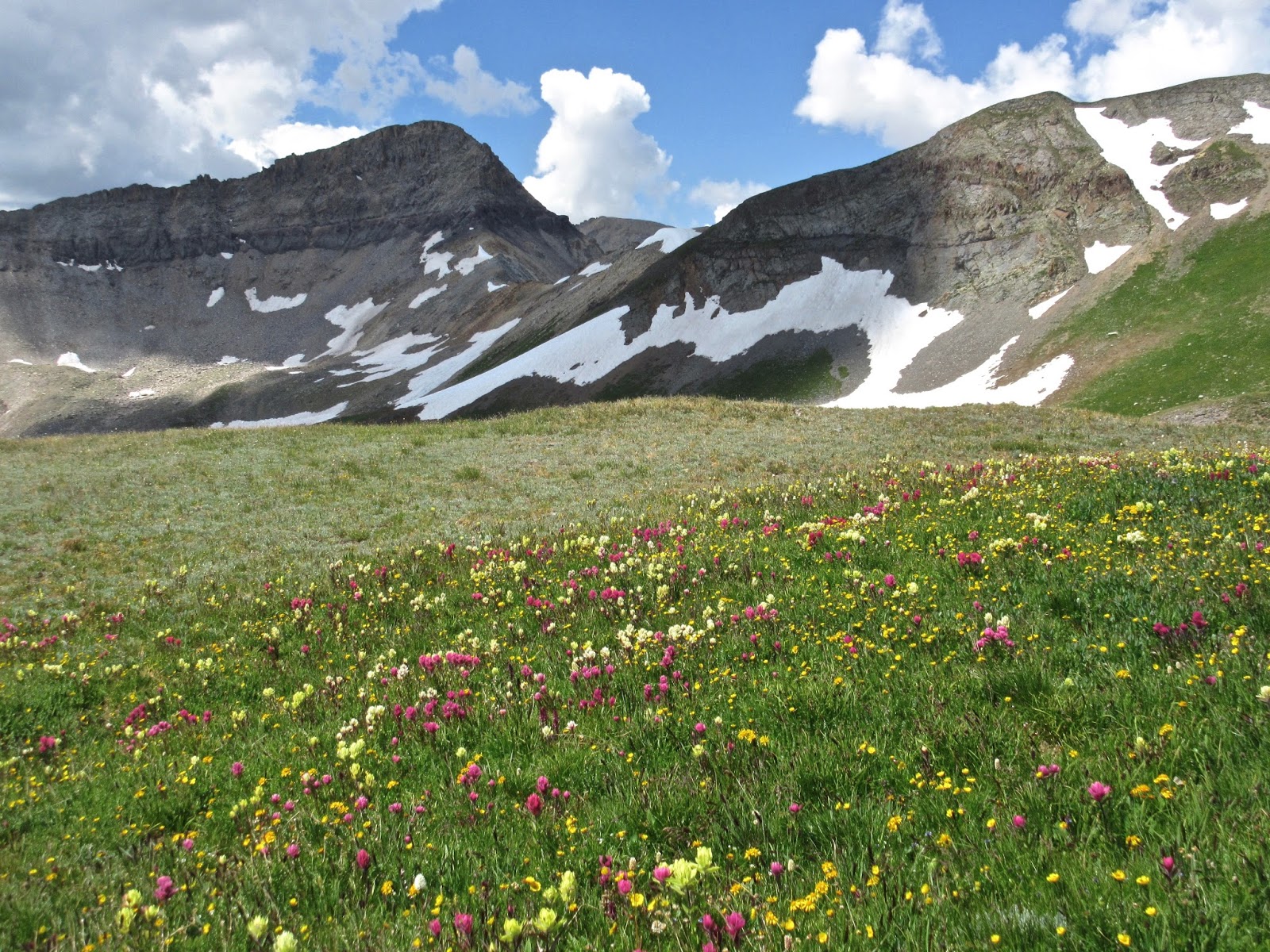 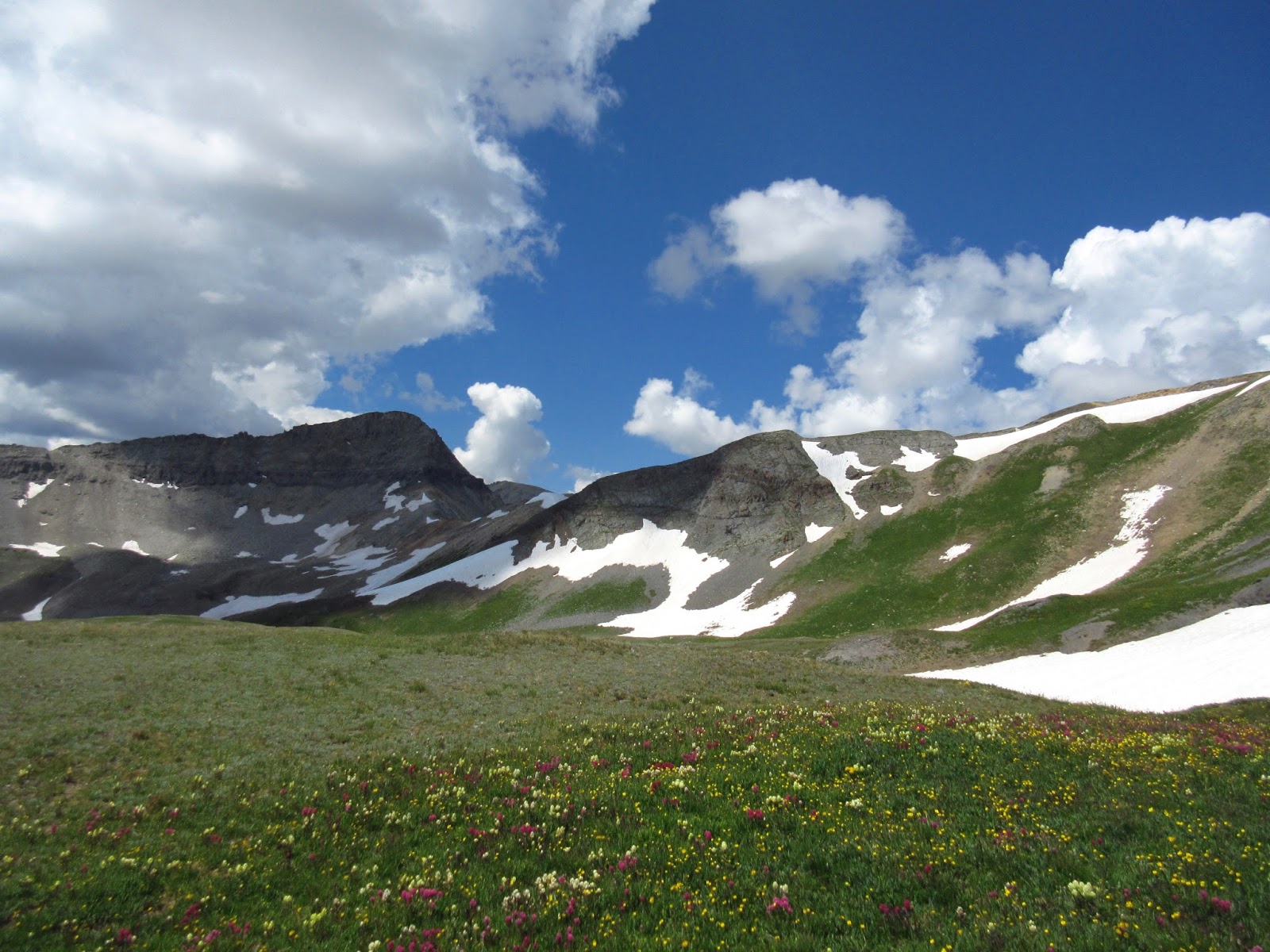 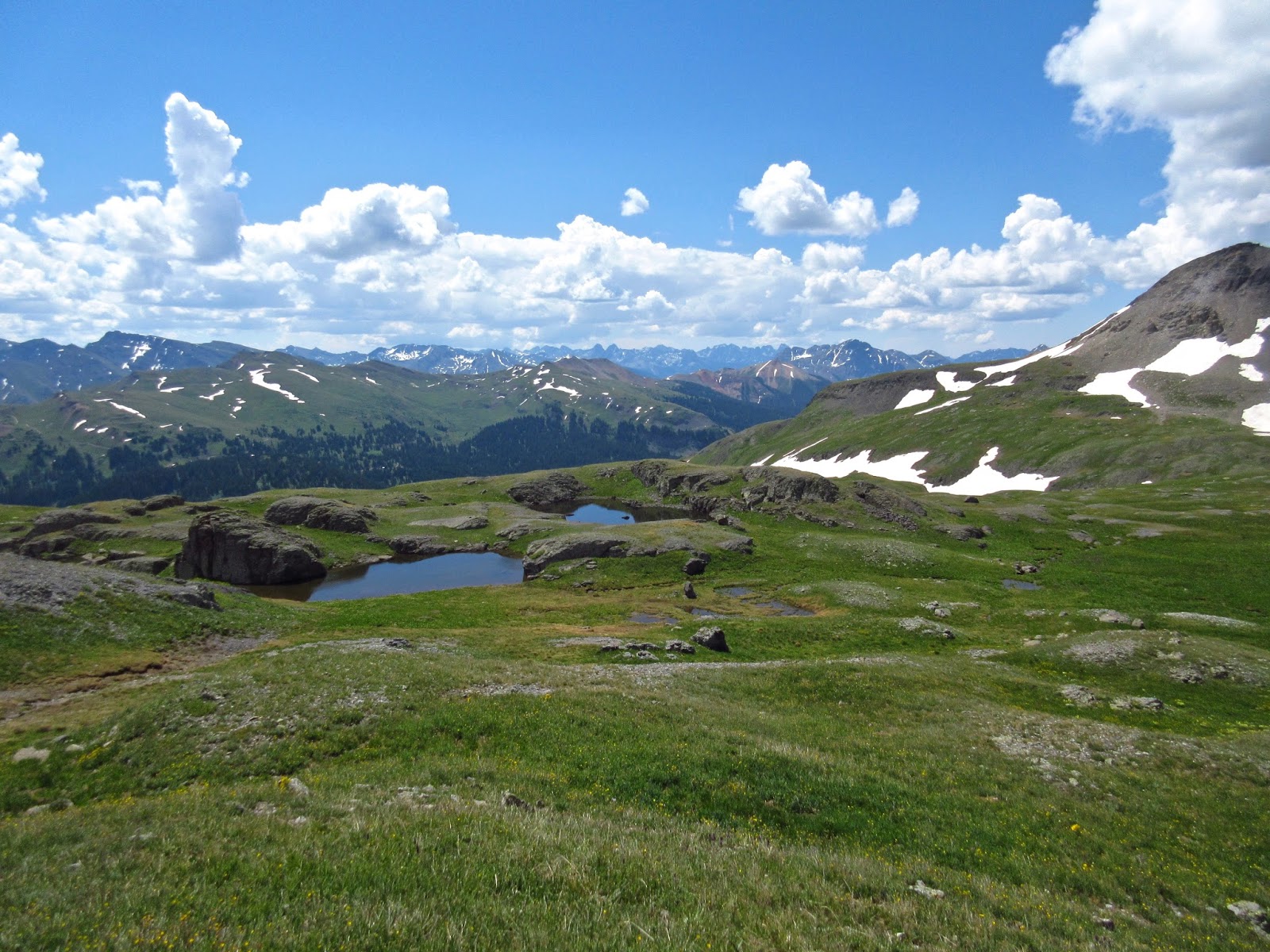 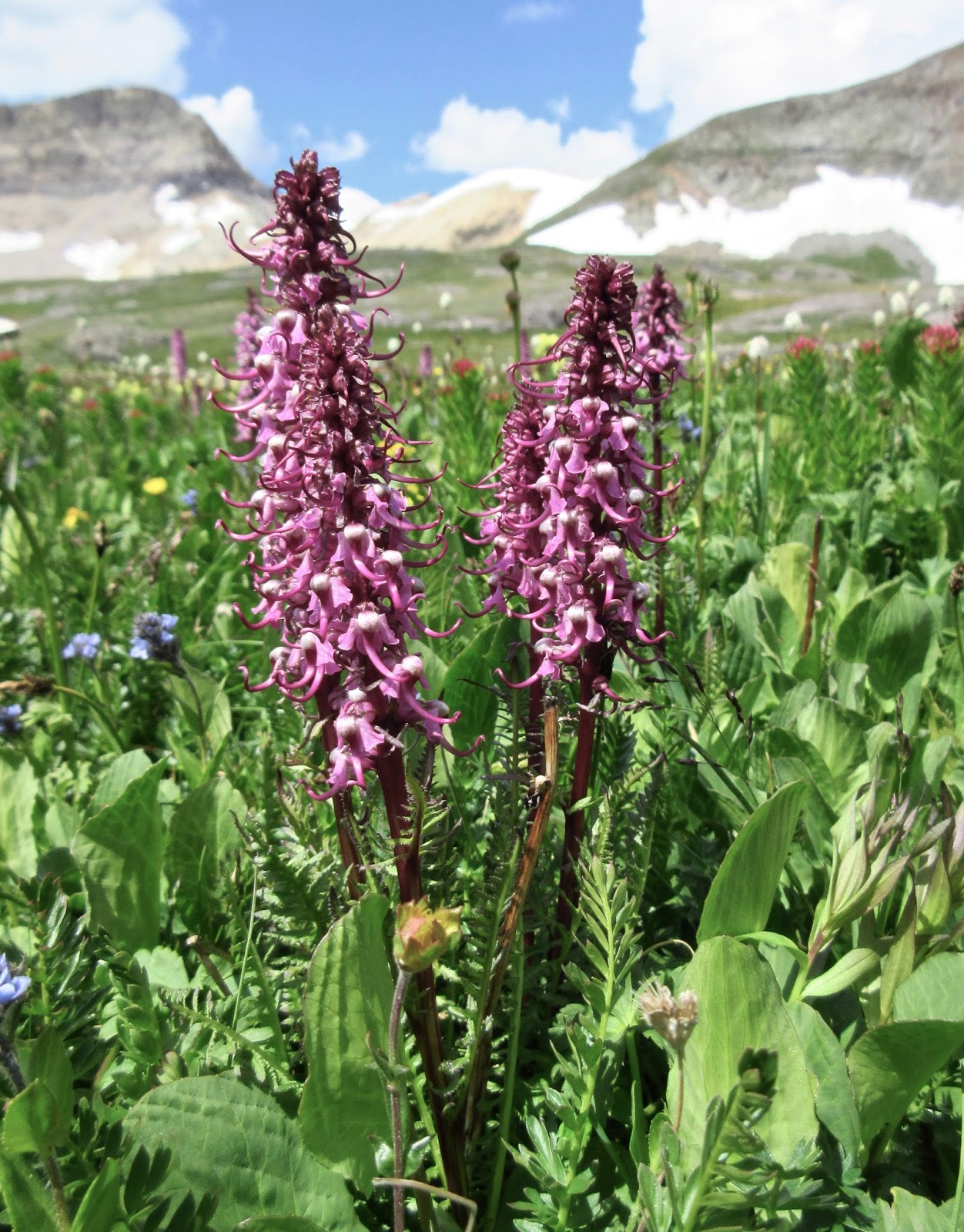 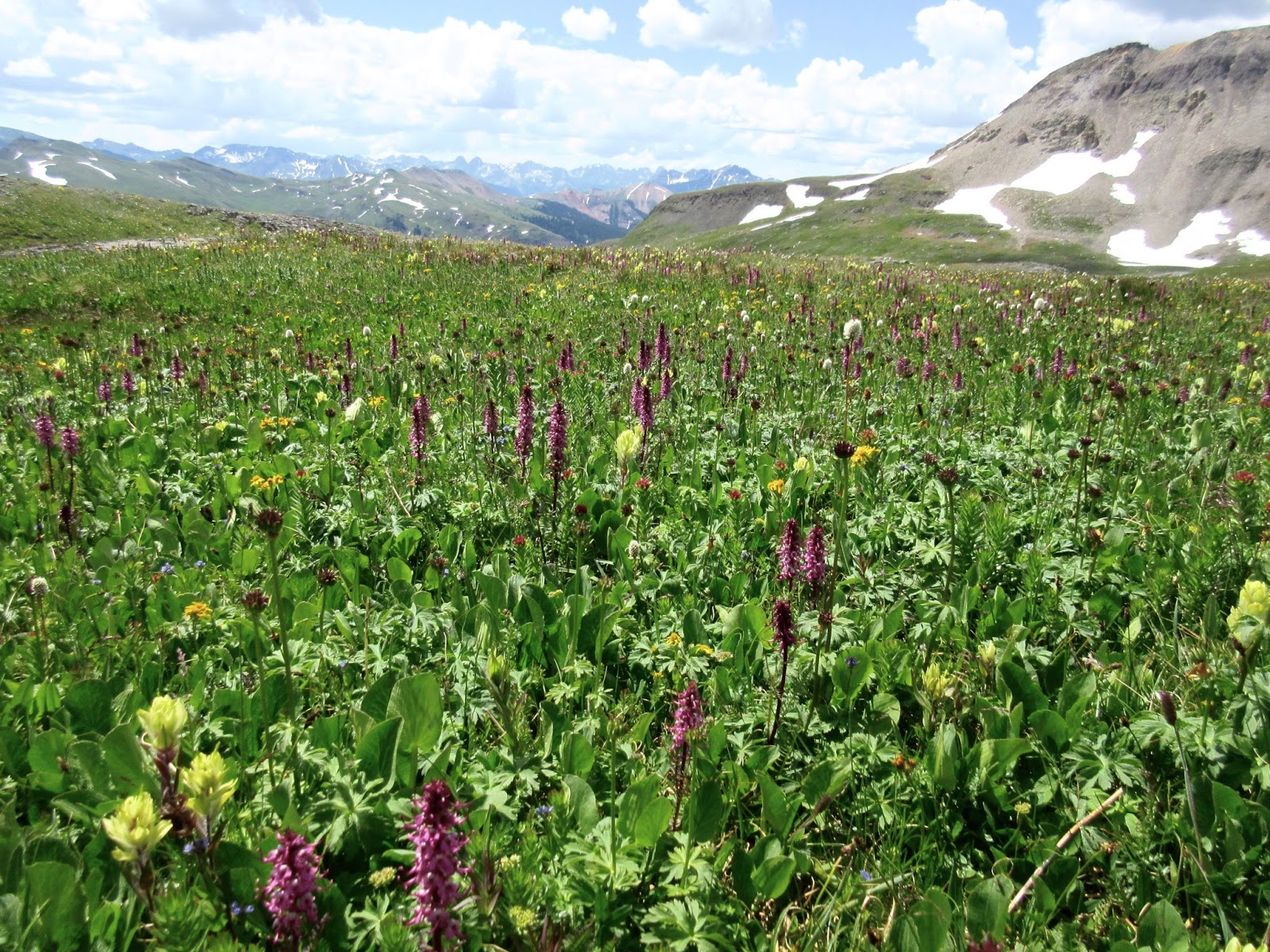 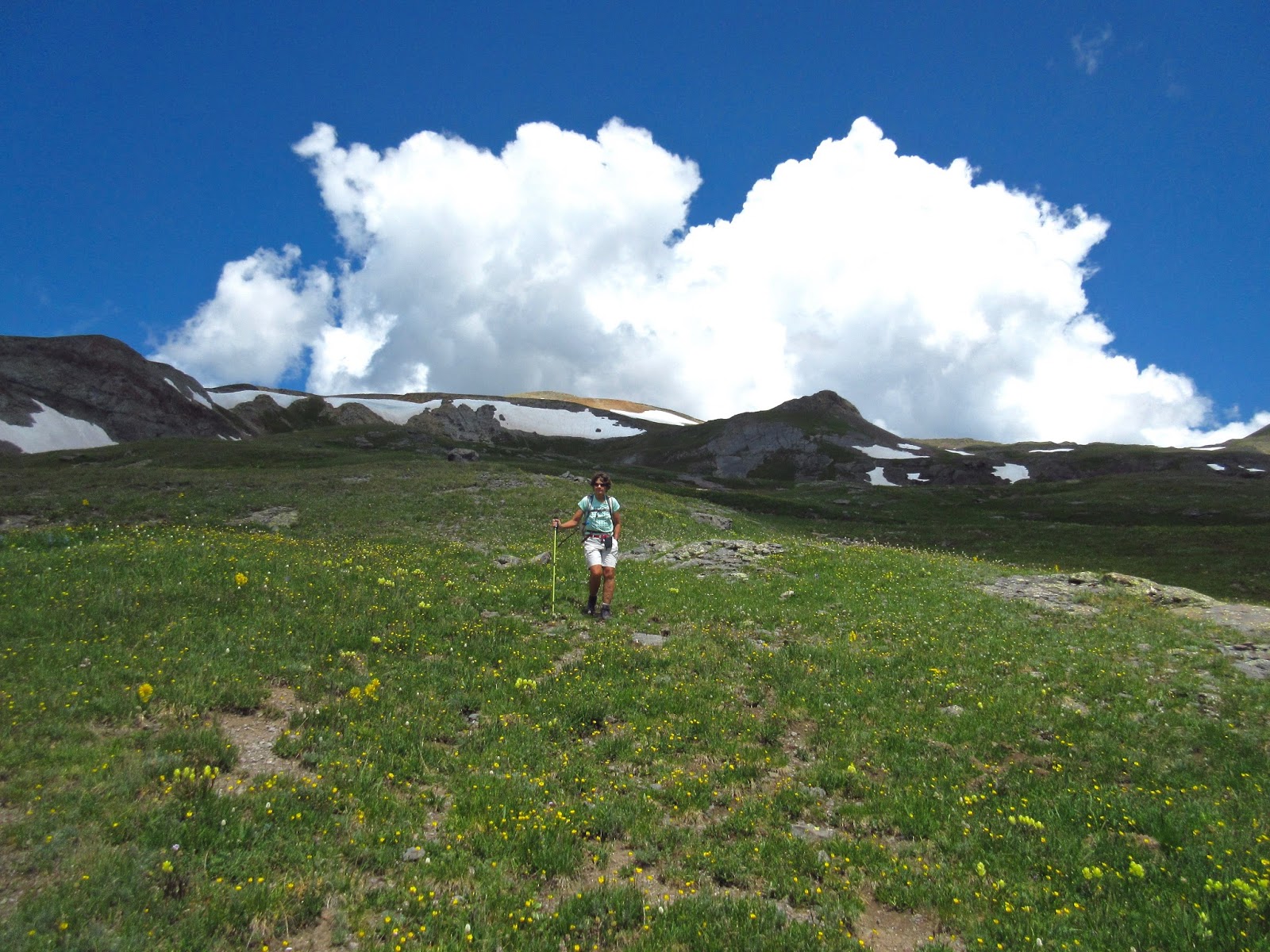 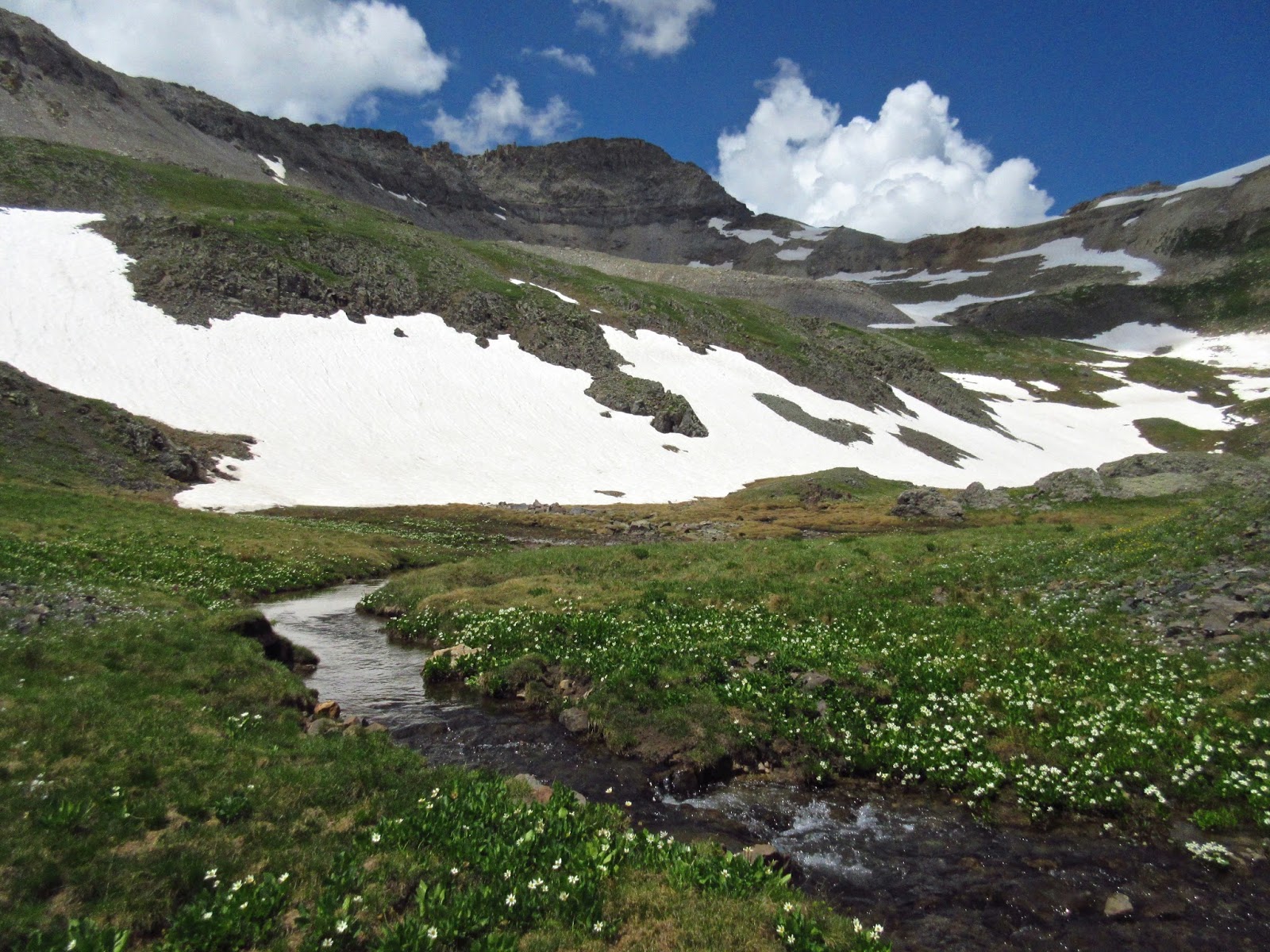 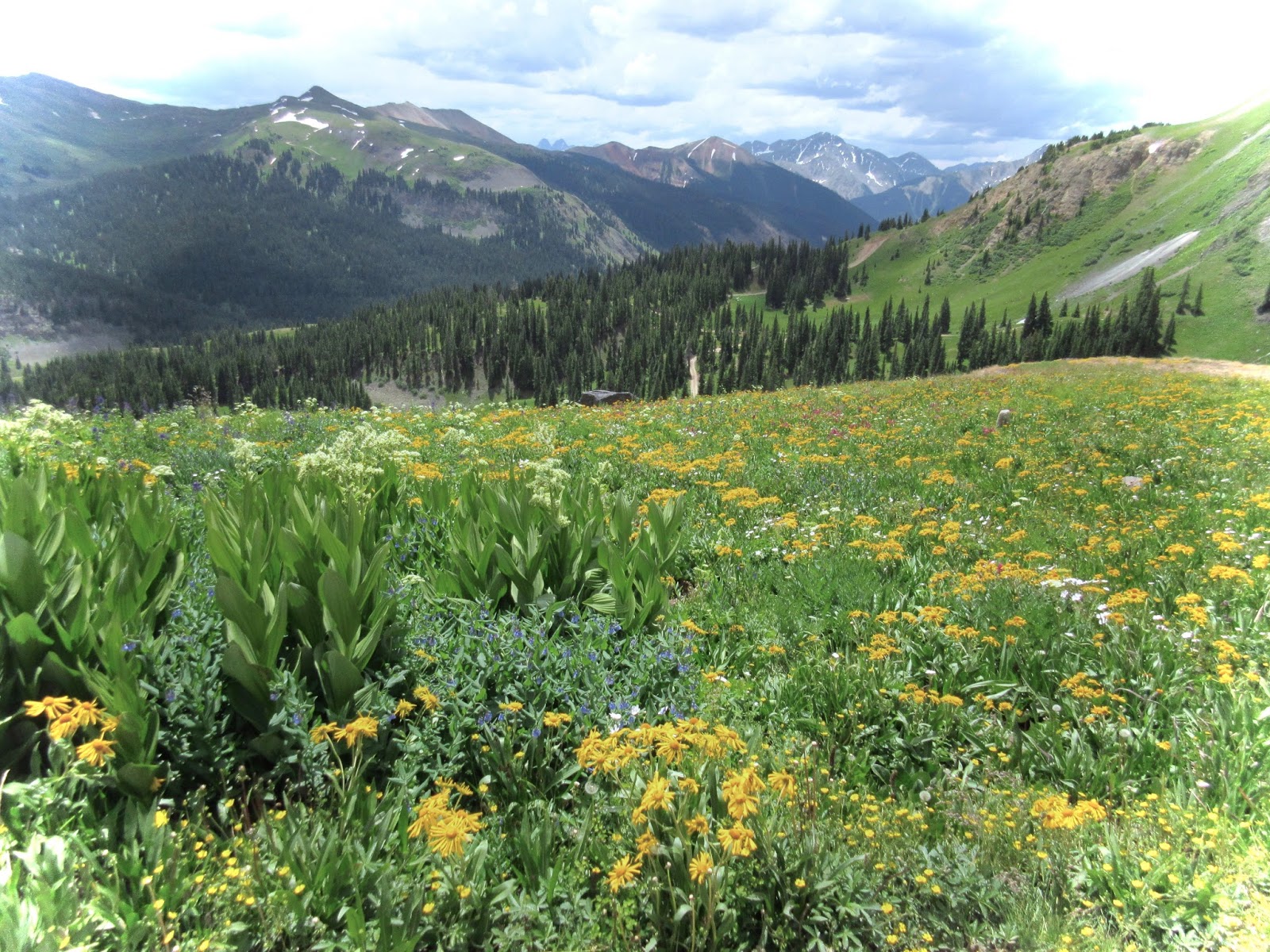