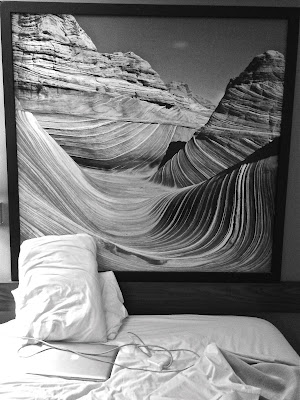 I slept with a soundness beyond definition, camped in the swirling vortex of "The Wave."

Of course it turned out to be a dream, spawned by a massive print on the wall of a cheapskate motel in Richfield, Utah. Someday I hope to hike The Wave. But first you must win the lucky-lotto it takes to get a ticket to the hottest show on the Arizona Strip. I'm O for 2 so far, and at 10 nonrefundable bucks a pop (I need two tickets) I'm thinking Govie's found a new way to put a dent in their massive deficit spending spree, all the while keeping almost everyone out, an unspoken goal, you know. Could we be entering an era of turnstiles in National Parks? "Give us 5 bucks and take a number, buddy." Actually, that might not be such a bad idea. The last two times we passed through Yellowstone it was an over-peopled zoo (minus elk, thanks to mismanagement of the wolf population) most of whom mistook coyotes for wolves. Ah, city-folk… 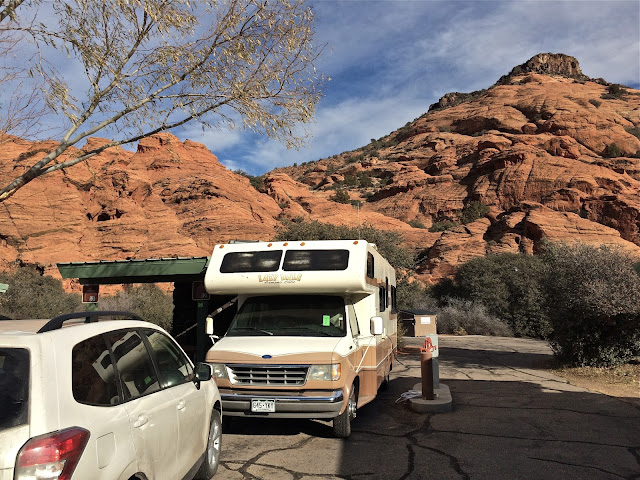 We moved on from "No Tell Motel's" fluttering neon sign to Goldie's Bar and Grill, and aimed her prodigious rear windows at Utah's quintessential red rocks in Snow Canyon. A cold north wind pinned me indoors, pining for warmer climes.

My current read is Eating Stone by Ellen Meloy, a book in which she poetically laments the loss of Utah's wild places and wildlife. She like me (or I like her) has a similar romance with sunburnt rocks: "In it lies a kind of music in stone… a cure for all emptiness."

Moseying south, we landed at Katherine's Landing on the bonnie bonnie banks of Lake Mohave, a quiet camp, away from the urbanity and tumult of Laugh-In and Bullshit City. After a couple of months of snowshoeing we were keen to dust off the mountain bikes. A 4 WD road tortured our quads, while seat posts were quite literally a pain in the ass. The road cut perpendicular to ridges and washes that drained a distant range of mountains and made for an endless series of ups and downs. 75% spent, out of cell range, and low on water, we finally turned back at a point where the road seemed to stretch out forever.

On to Lake "Have a Sioux," at least that's what Siri called it when I asked her to find a liquor store with "craft brews." I'm thinking of switching to the male version of Siri in order to resolve our "communication issues." She just doesn't understand me… a "Mars/Venus" thing. Anyway, we ended up at Safeway and settled for the last six pack of Lagunitas IPA. Based on cooler space allotment in supermarkets, I believe 90% of desert dwellers prefer Bud, Bud Light, or Coors, Coors Light. There's no accounting for "taste." Spoken like a true beer-snob.

We camped in Lake Havasu State Park's overflow; 25 Bucks; no water, no power, but the views were nice. 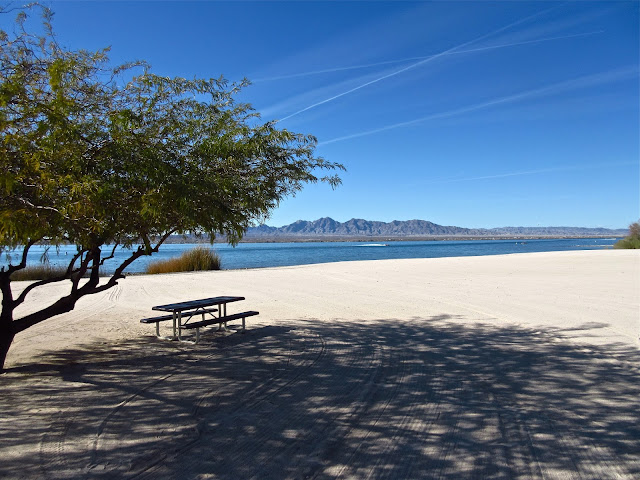 Onward. I've always loved the mountainous drive between Havasu and Parker—a 40 some mile stretch of sparkling aqua-marine water, lapping pea gravel shores and rust-colored lava rock. In one of the prettier resort areas a sign advertised 10 dollar per night camping with full hookups. Sounded too good to be true so we kept going… finally arriving in the infamous "Q."

In times of desolation and depravity I must remind myself how the road to "somewhere" often goes through "nowhere." Long time readers know how Bobbie and I feel about Quartzsite. I make no bones about Q, have never shied away from poking fun at its Barnum and Bailey atmosphere, permanent dust cloud, incessant wind, nor the peculiar mix of millionaires in diesel quad-slide mansions and down-and-outers in converted school busses that run on used french fry grease.

Keep in mind that this blogger's viewpoints are not "mainstream." I'm not a good "cheerleader" for the full-time "RV lifestyle." Almost from the beginning I questioned the reality versus the propaganda. After only a few months I was disenchanted, wondering, "Is this all there is?" Especially after experiencing Q, with its mayhem and crowds. I didn't get selling out in order to leave the din of big city life—with its congestion, pollution, and the constant drone of freeways—only to squat in a skeletal desert with a hundred thousand RV'ers, noisy generators, a permanent dust cloud, and the ever-present drone of a freeway.

Disenchantment with (most) RV parks soon followed, for obvious reasons. Eventually, we forked over a cool grand for the quietest generator on the market, and thus began an experiment with boondocking nearer places our hearts and legs longed to explore. In the end, "full timing" wasn't a fit for us. Bobbie loves her "hearth" in Lovely Ouray, and I need a "shop." The common denominator is that we both love and need the mountains out our doorstep, as well as the occasional escape.

This is a personal viewpoint, not saying it's right for everyone or anyone. If people were all in agreement about everything there wouldn't be much to blog about, eh? no need for the Op-Ed page, and we'd have a dull one-party political system :).

He's a real nowhere man
Sitting in his nowhere land
Making all his nowhere plans for nobody
Doesn't have a point of view
Knows not where he's going to
Isn't he a bit like you and me?
Nowhere man please listen
You don't know what you're missing
Nowhere man, The world is at your command
He's as blind as he can be
Just sees what he wants to see
Nowhere man, can you see me at all
Nowhere man don't worry
Take your time, don't hurry
Leave it all till somebody else
Lends you a hand


Now on to the "Blogger Fest," a gathering of RV bloggers from all over the United States and Canada in Quartzsite, Arizona.

It was somewhat of a coincidence that we arrived in Q during the Big Show this year, and that, as I like to call it, the second annual "Blabber Fest" was being held. I've always believed that "intersections" happen for a reason, and that if a door opens one should walk through it and have a look around. Still, I had reservations about attending and fell off both sides of the "fence" a few times. In the end, there were several bloggers we hadn't had the pleasure of crossing paths with, not the least among them, Bayfield Al, Kelly, and Pheebs :)

I've been reading "The Bayfield Bunch" for so long I couldn't tell you, the first time because there is a "Bayfield" in Colorado east of Durango and I thought that that was where they were from. Well, I couldn't have been more off the mark. But for some reason, maybe a "kinship" of sorts, I put them on my sidebar and kept checking in. They, like us, were part-timers with a home base in Canada. I also admired that Al blogged everyday, something I tried and kept up for over a year early on, before running out of words, opinions, adventures, and energy. I also enjoyed his easy, humble style, just sharing his ordinary days and trials, always accompanied by wonderful photos of sunsets and birds and Pheebs, the most kindly dog I've ever petted, much like her owners. So I ride along with Bayfield, on their travels and boondocks in the RV de jour… certainly a kinship there, unfortunately, as we are on our eighth rig (sigh).

It may sound odd, but after reading "Bayfield" for a while I thought here's an honest man, someone I haven't even met, but that I could trust in a foxhole or to the end. In snippets of conversation at the Blabber Fest, my feeling of "kinship" was to some extent validated. I got the idea that, like me (or me like him) Al and I sometimes wander about in existential comas: "what's it all about, why am I here, is this all there is, and who really cares?" Certainly not "the mountain," as I often write… nor, seemingly, its omniscient Creator.

Ellen Meloy writes about it with both eloquence and causticity in Eating Stone, "My life was the typical middle-aged gut-churning panic of riding a globe through space, a globe that spins through time with utter indifference to one's being… a baby boomer… standing in front of the mirror... astonished to discover that dissipation and disintegration of mind… body, and matter are essential elements of existence, and that the slide toward them is ever quickening and inevitable." What can I say, "from dust to dust."

All in all, an enjoyable afternoon and I'm glad I braved the unpredictable waters of a social gathering with complete strangers. It was a pleasure to meet (almost) everyone, and to those I missed, see you down the road :). 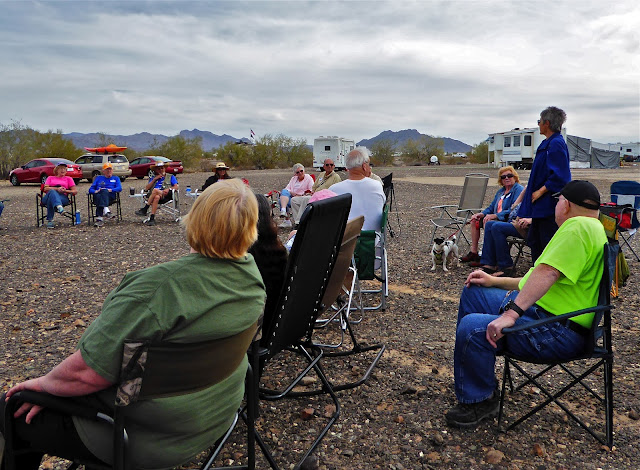 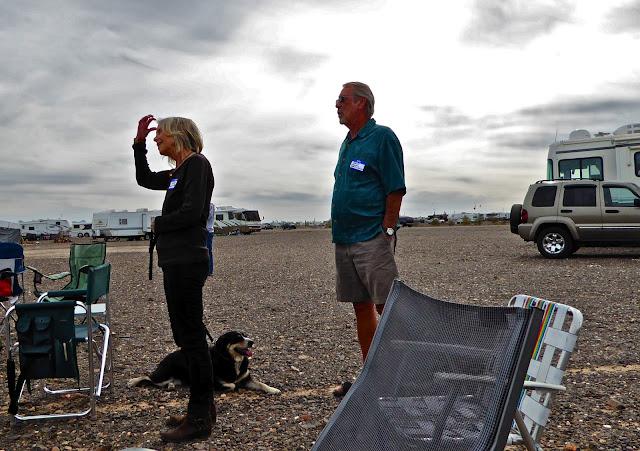 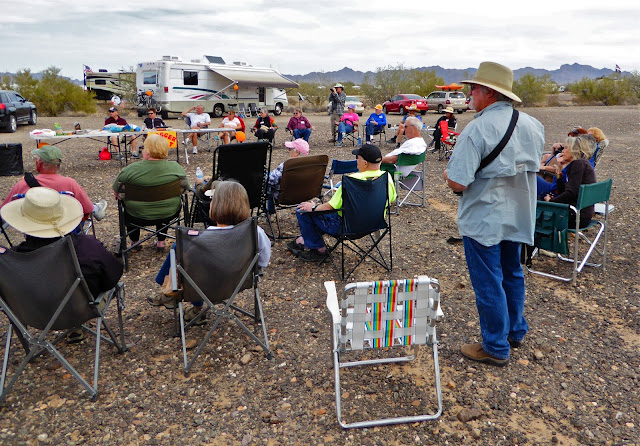 Posted by Box Canyon Blog.com at 9:30 AM