"Goin' Down," A Low Water Float On The Verde River 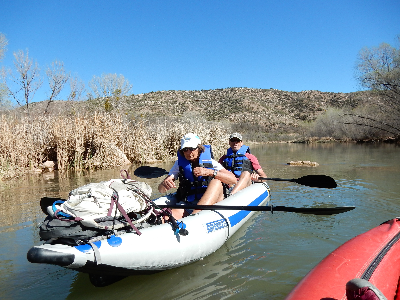 Scamps did the logistics, so all we had to do was show up… 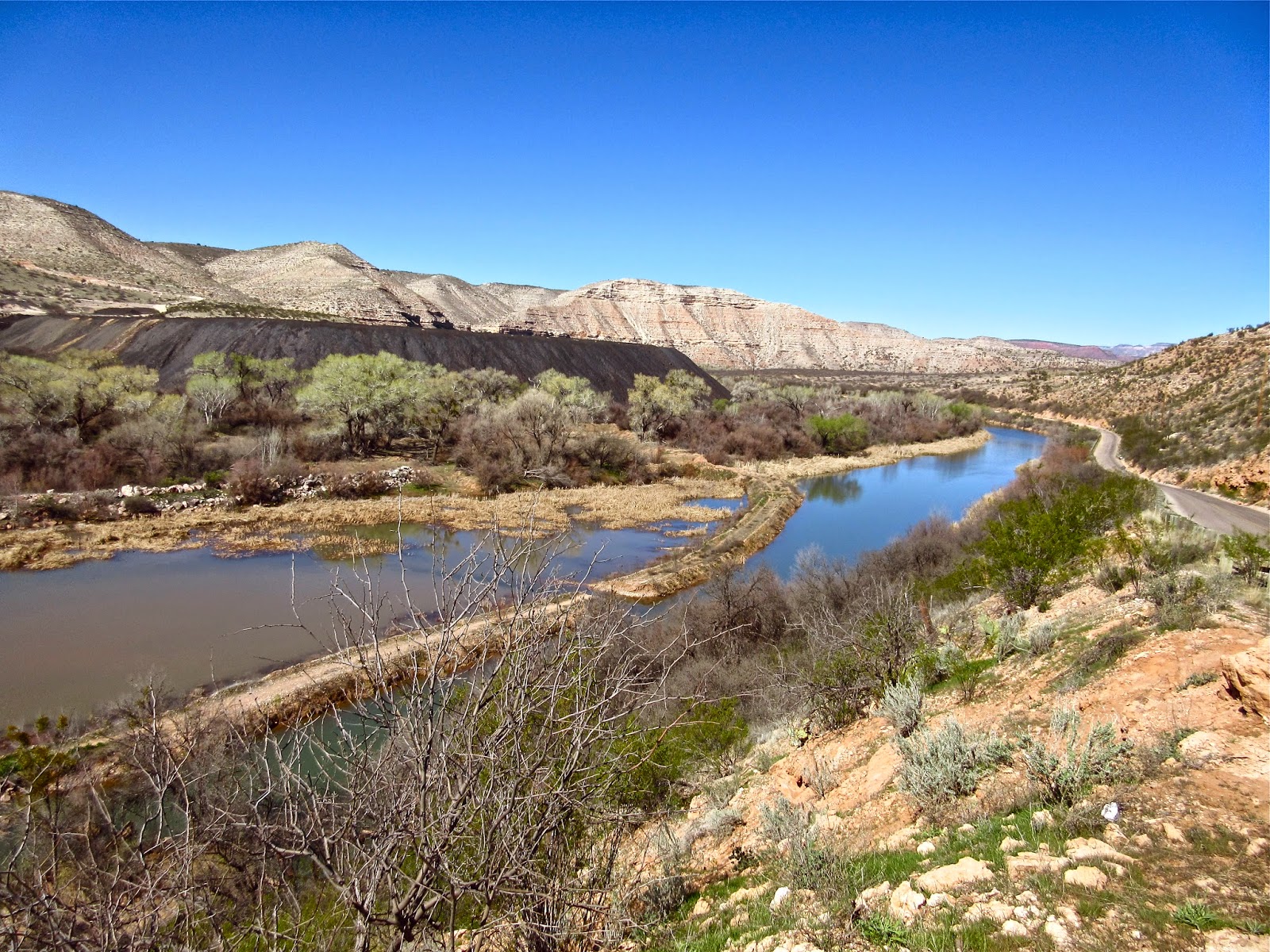 load gear and rafts into their pickup and drove north of Cottonwood's quaint and thriving Old Town. At Tootzigoot turnoff we hang a right. It's going to be a whopping 3 mile float… be lucky to get her done by sundown. Eric says he forgot the beer. 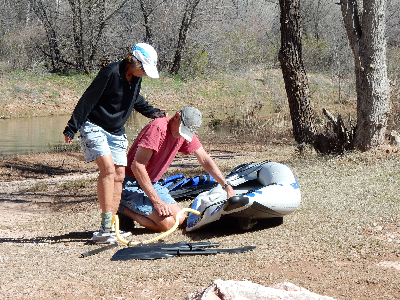 I  fall to my knees, begin to weep uncontrollably. Bobbie's supportive and consoling… says, "You can do this Mark, I know you can."
"What's the point," I cried. "It's like eating a cone without ice cream." 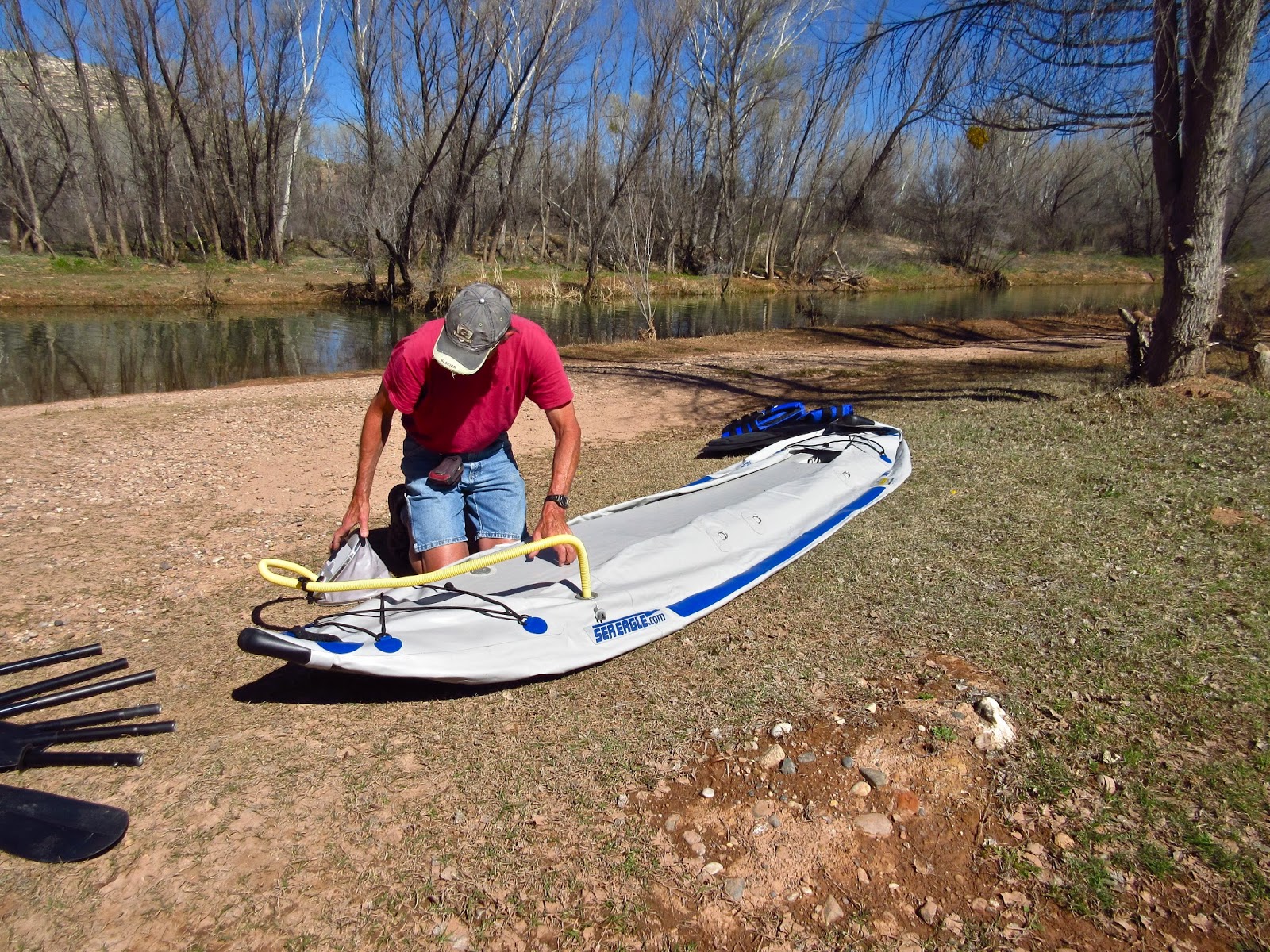 Bobbie cramps up trying to manually inflate the Sea Eagle and must lie down, so I have to do everything… sober, no less. Scamps drag out a 12 volt super pump just as I finish inflating the Sea Eagle. It's 2:00 pm, the sun is bearing down and I'm sweating like a sow in heat… and we're still on the bank. I load 5 days worth of supplies on the Sea Eagle's nose... in case Eric gets us lost. You just can't trust a man who forgets to bring beer to a float trip. 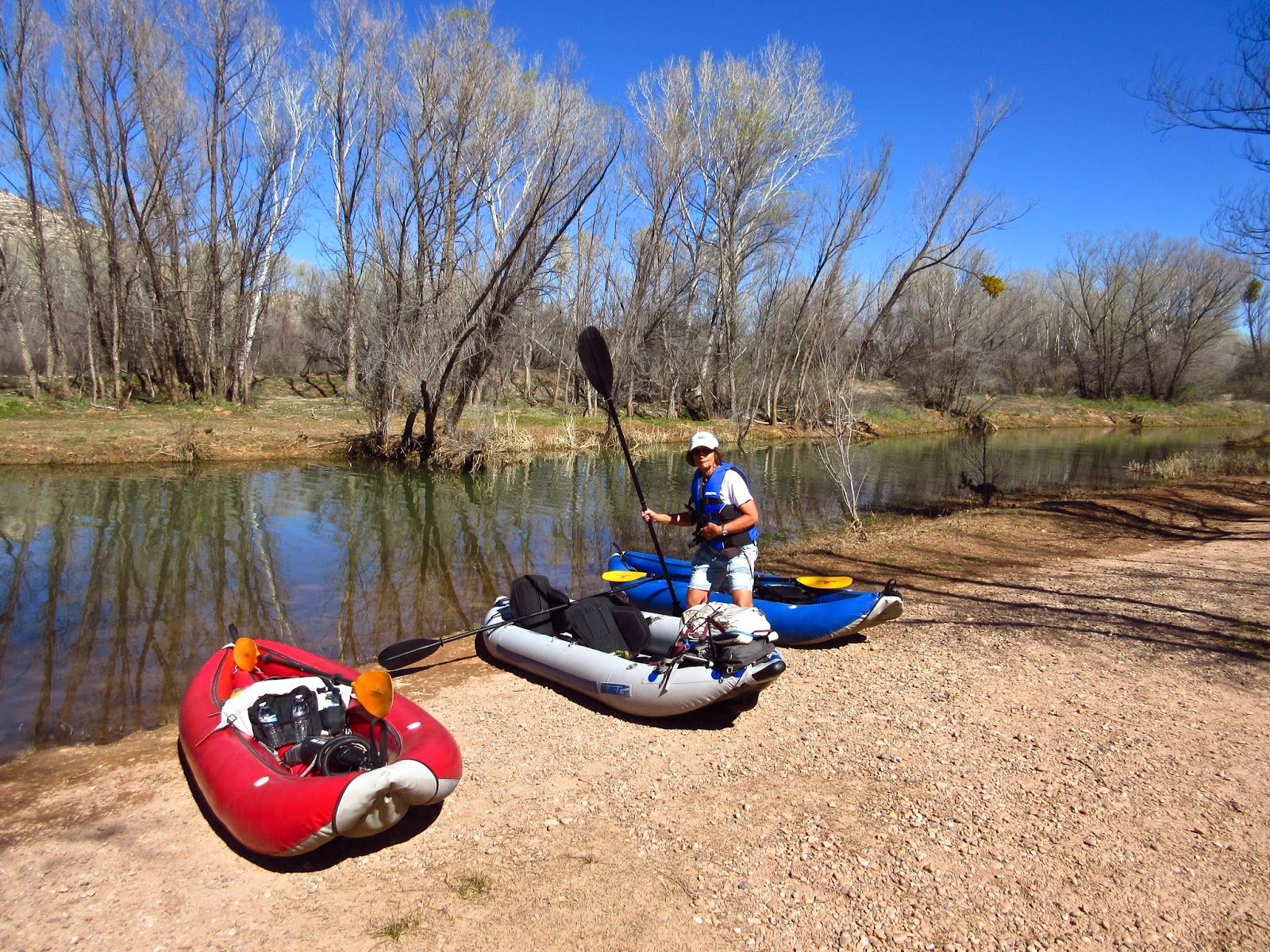 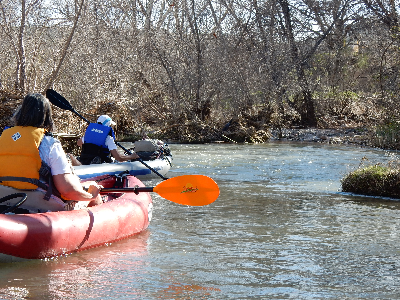 At a measly 70 CFS, there are huge boulders to negotiate. 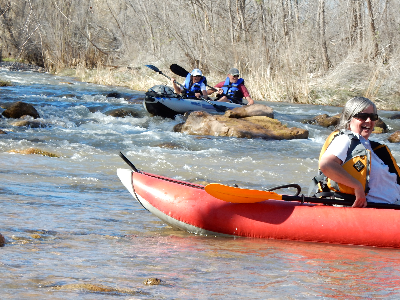 Maureen questions going sideways through rapids, wishes she would have stayed home to watch Days Of Our Lives. 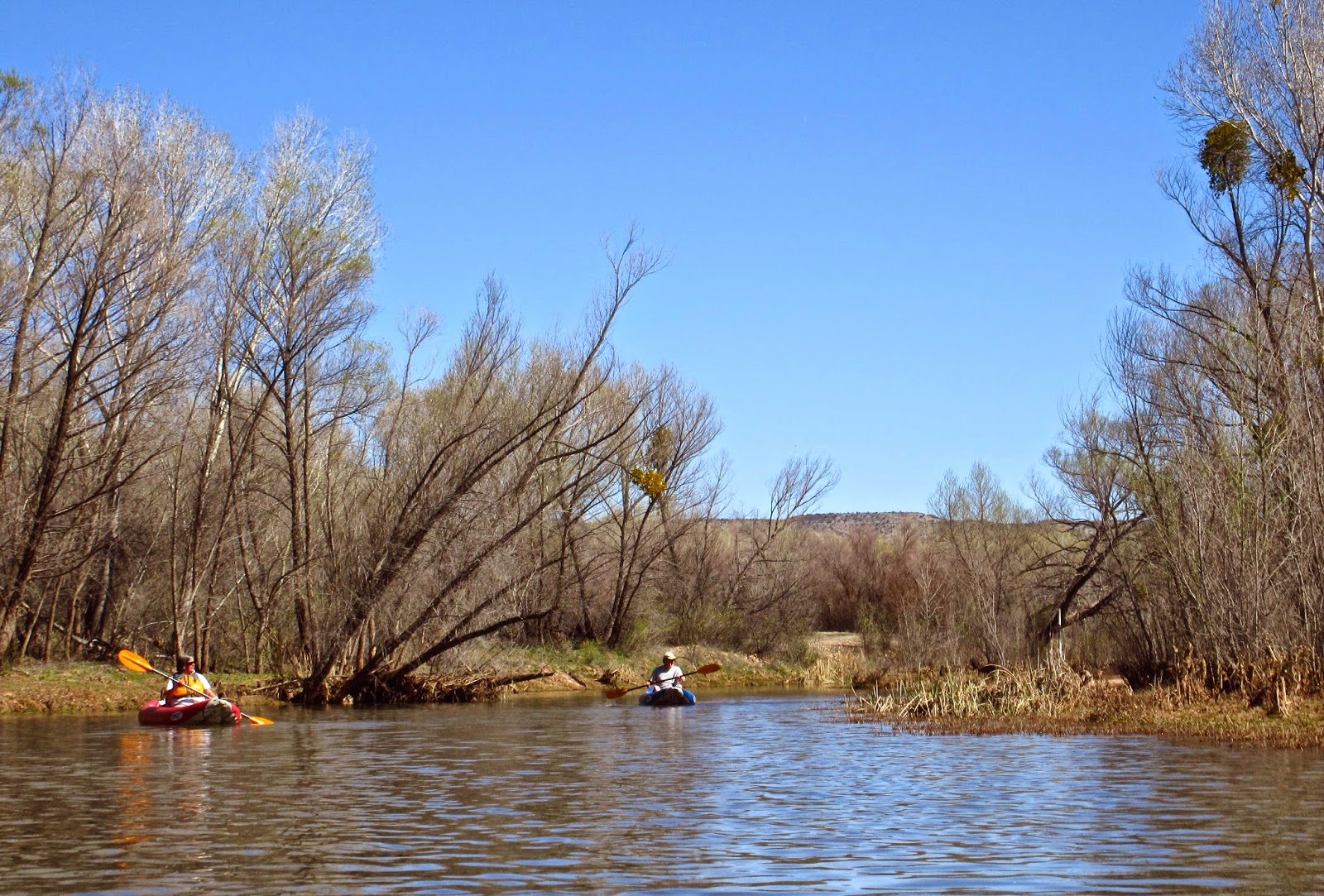 The Verde's all of ankle deep on a titmouse—a roily series of Class I rapids interspersed with still-water ponds and headwind. "God, is this a test?" 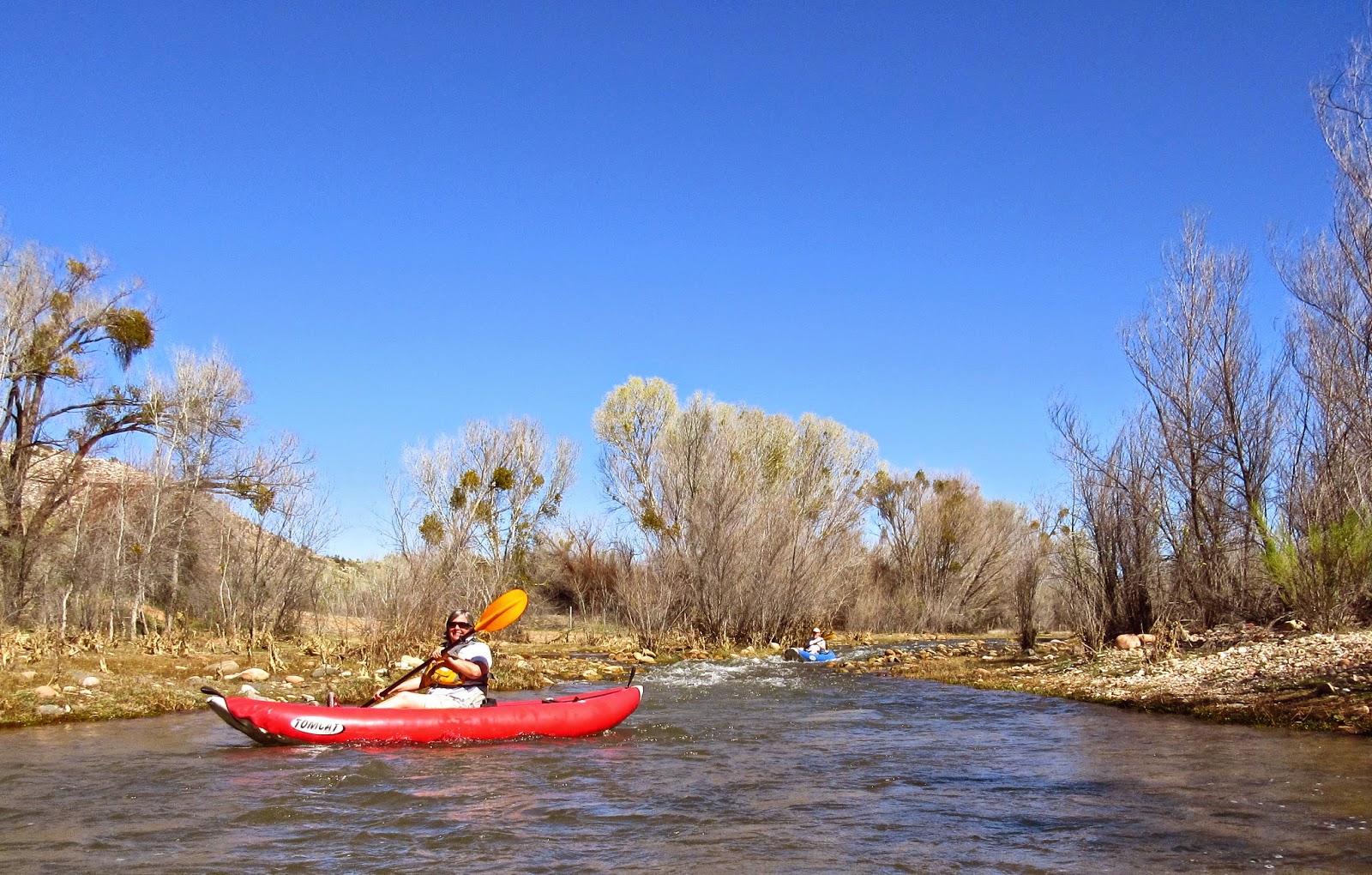 We lift butts in order to keep kayaks moving... only to be stalled by wind in the next pond. My mouth's drier than a bale of cotton, and we have no Beer. 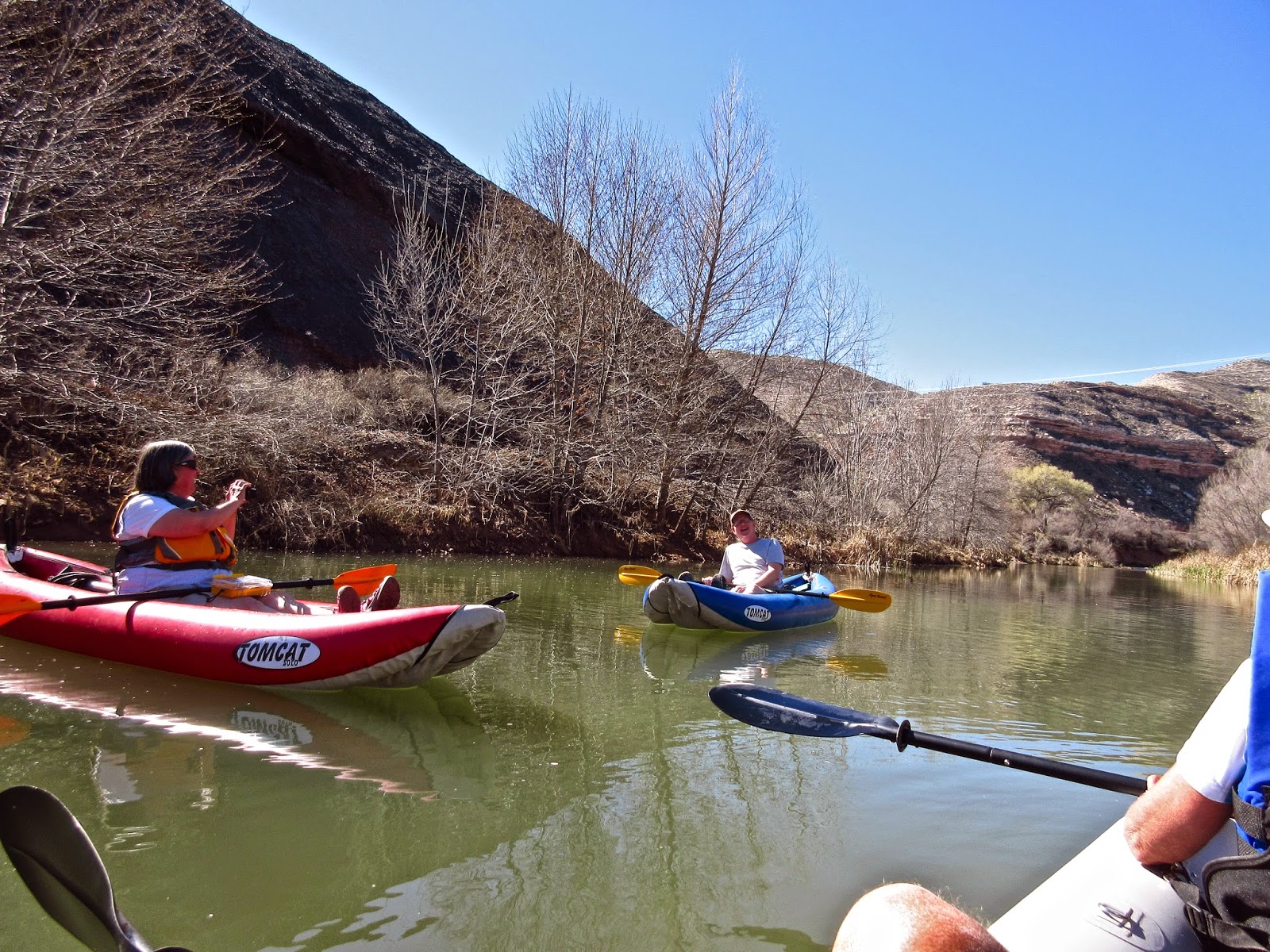 Photos of Scamps, not sipping beer. 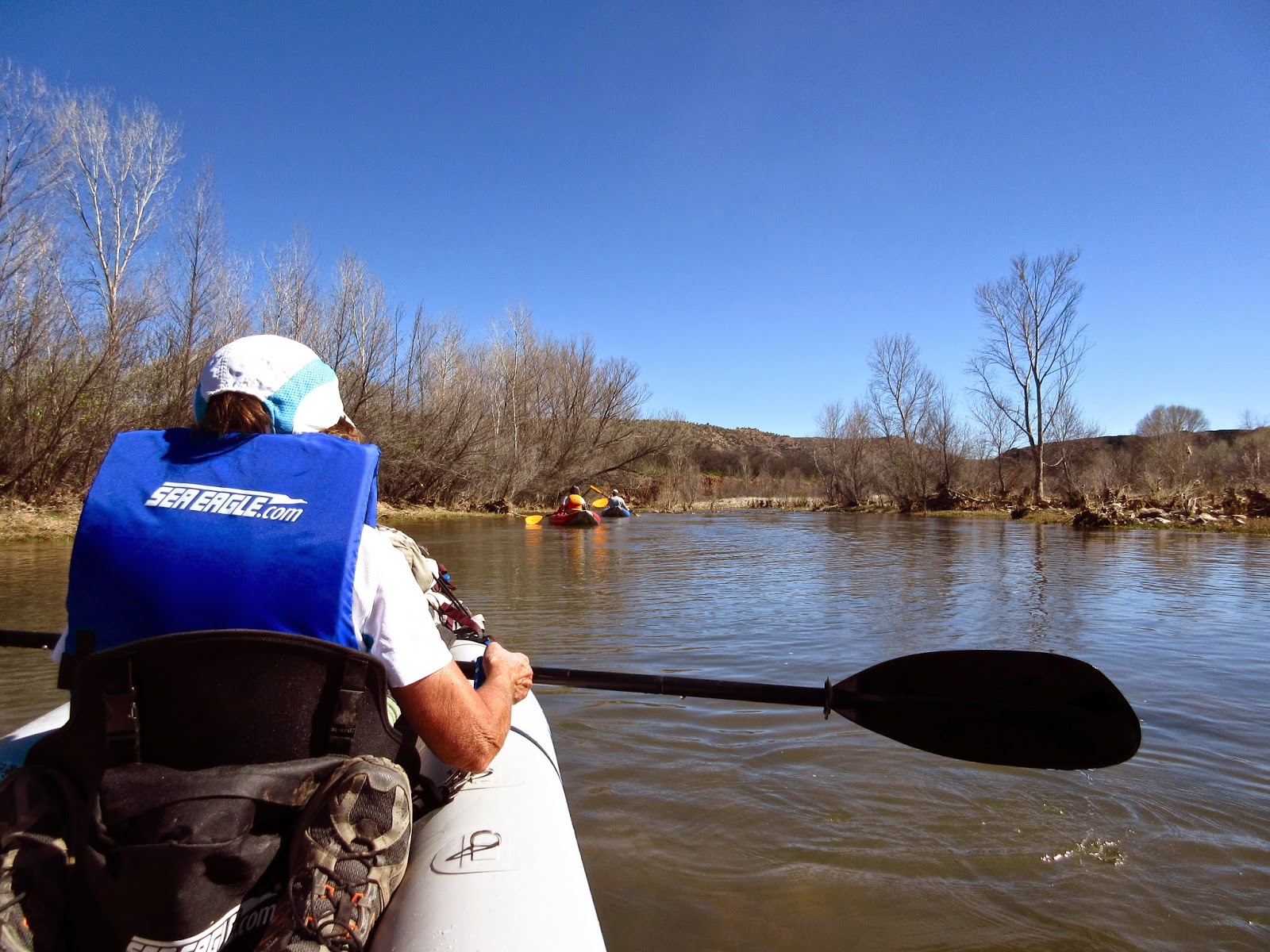 The pace is relentless, we can't keep up. 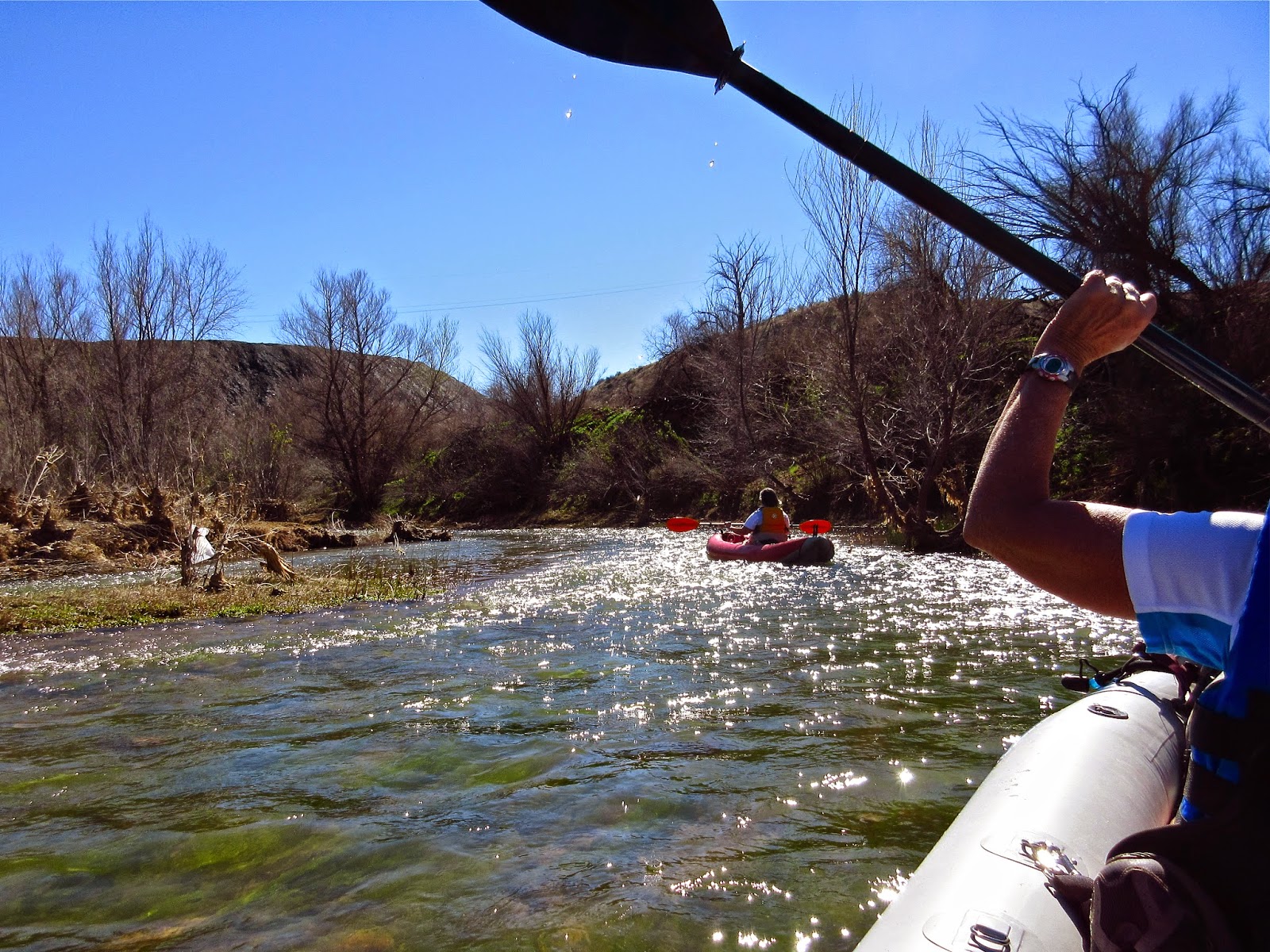 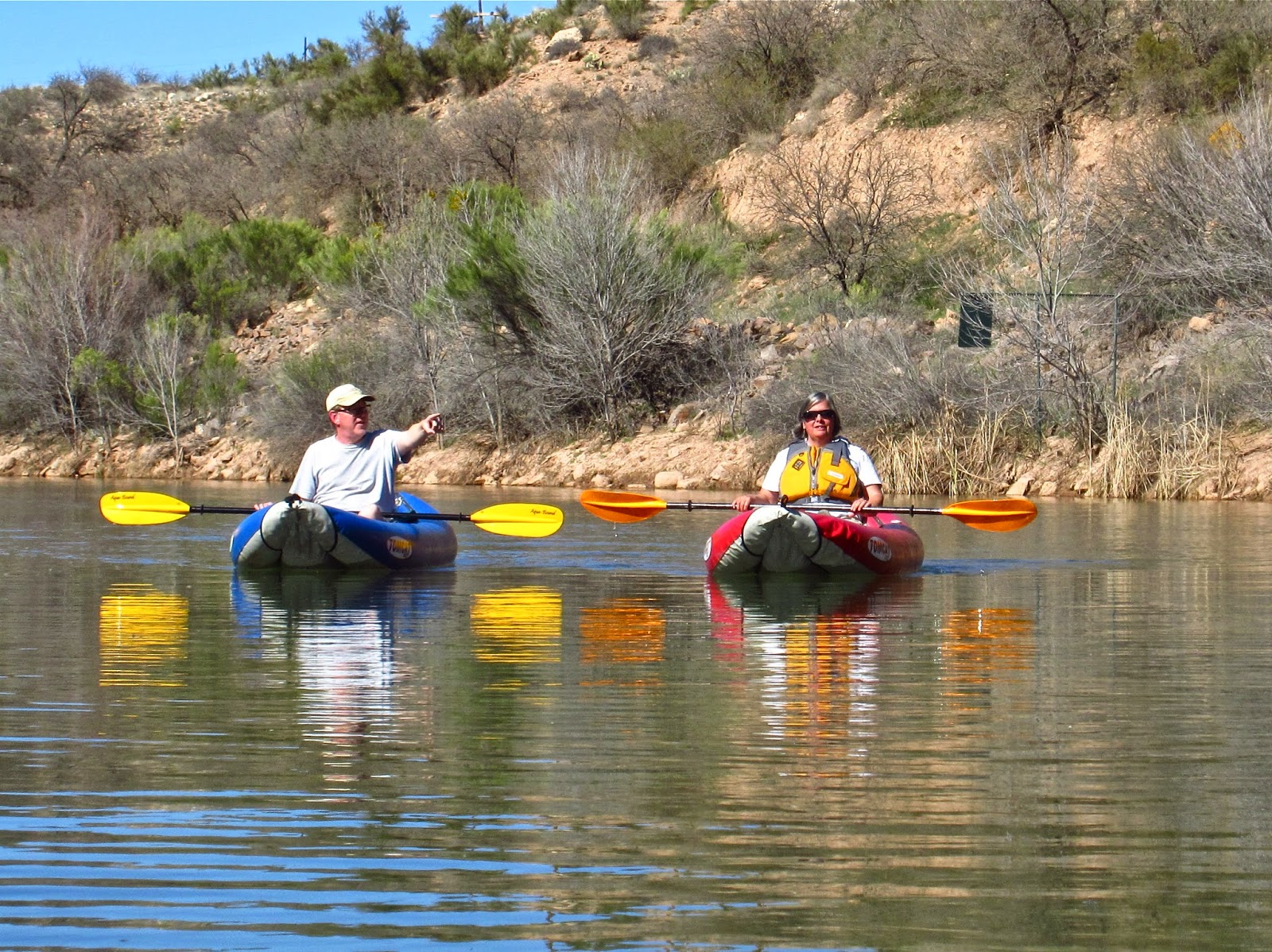 I think we're lost, but Eric points to our vehicle.

"Who cares? There no beer waiting for us."

I jump from Sea Eagle in an attempt to put an end to the misery. The water's three inches deep, I survive but Siri does not.  She managed a text as she draws her last breath: "Mark, you ignorant bastard. This is the second time you've drowned me!" 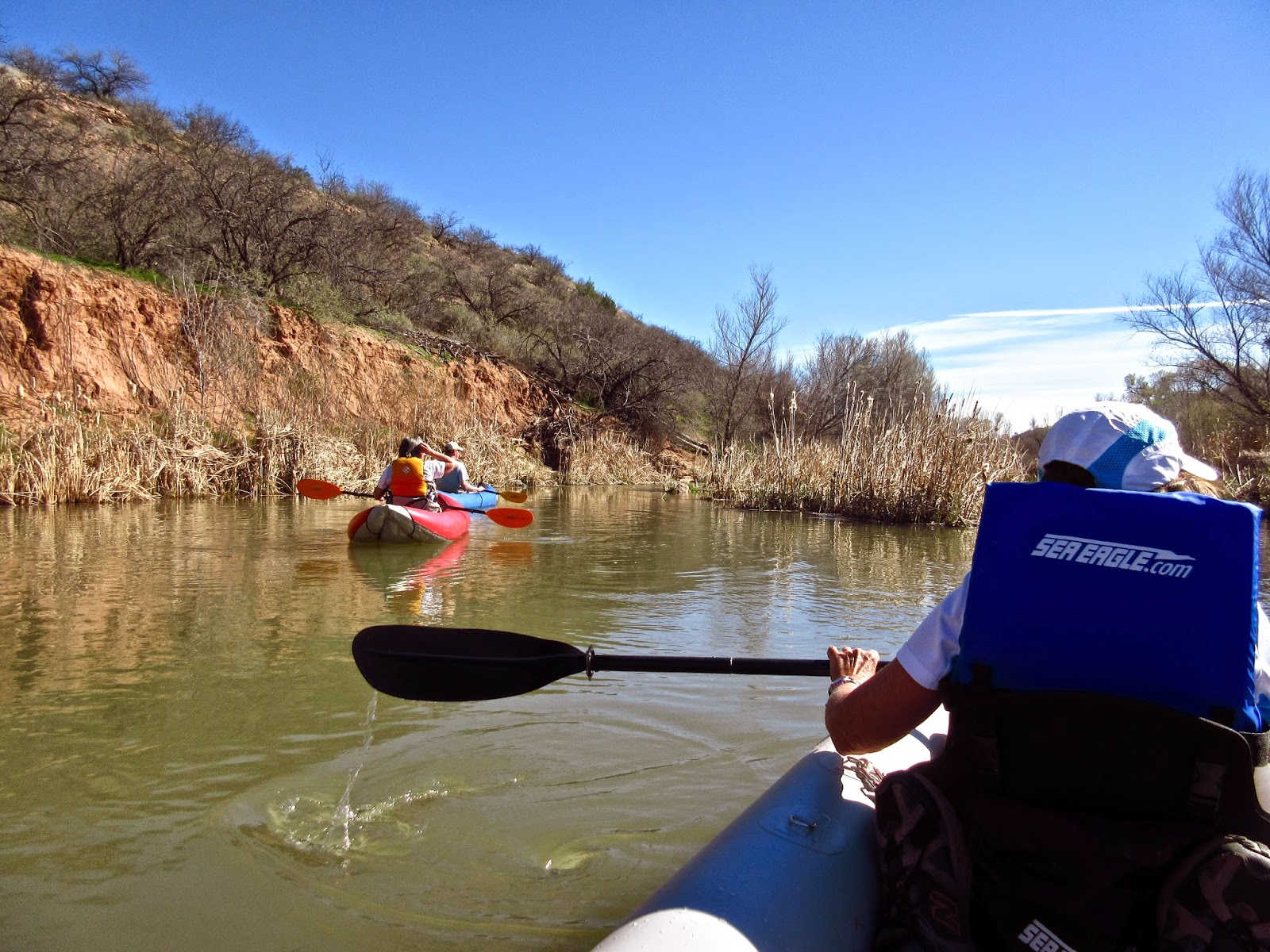 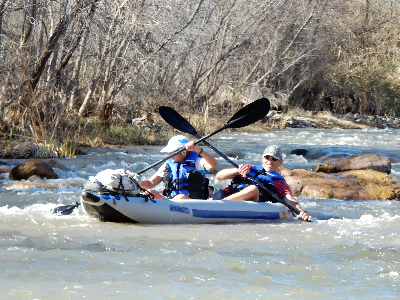 It's hard to paddle sober. I fall out the back of Sea Eagle... 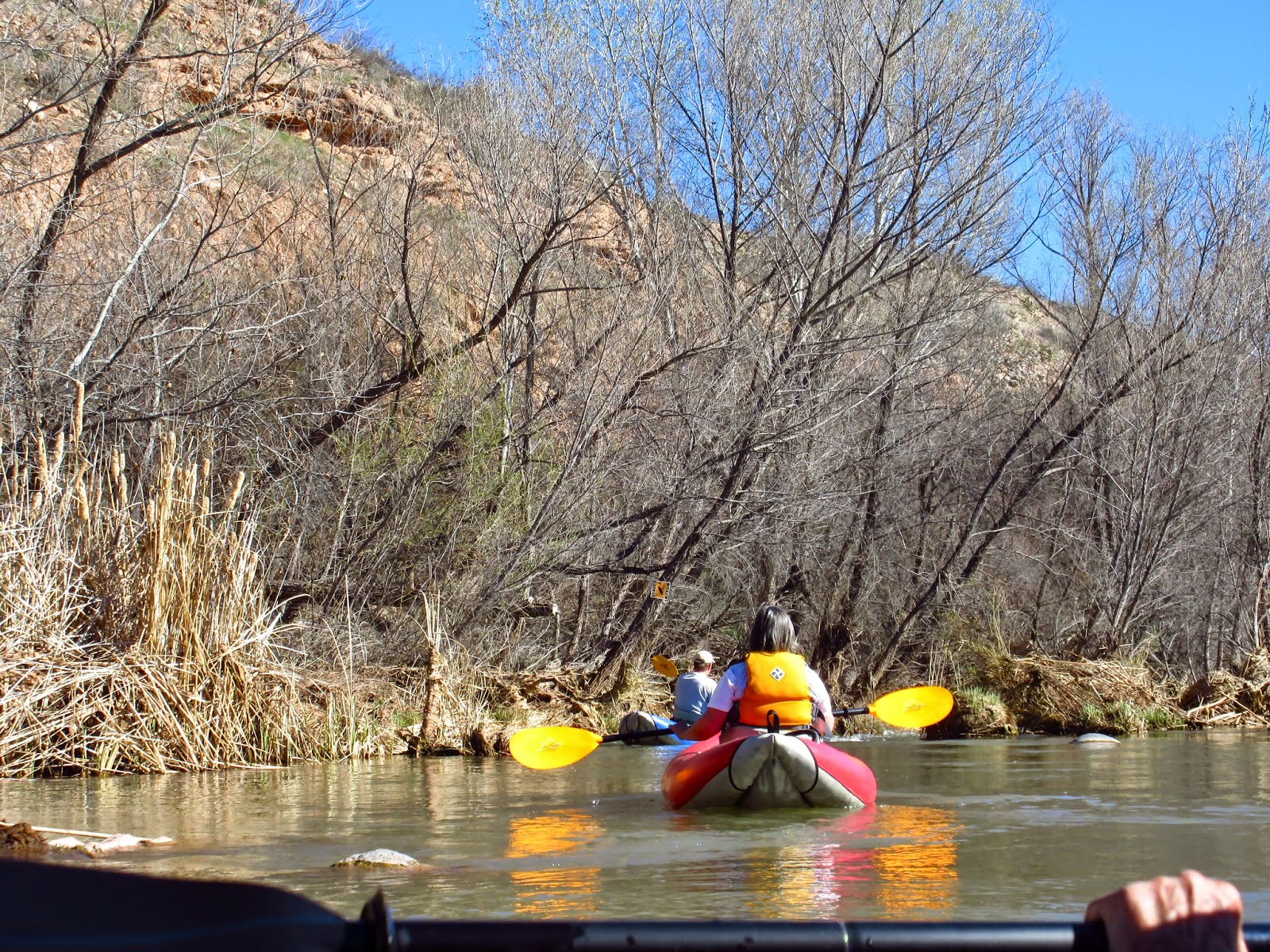 Note 5 day supply of gear on the front of Sea Eagle, but no beer. 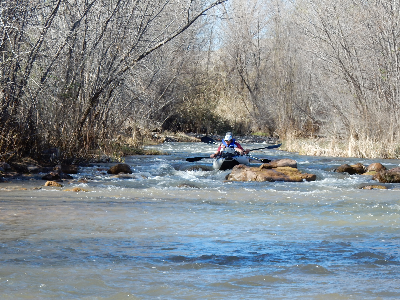 No, Bobbie… you are doing it all wrong. You're supposed to go sideways through rapids! Either do it right or let me drive. 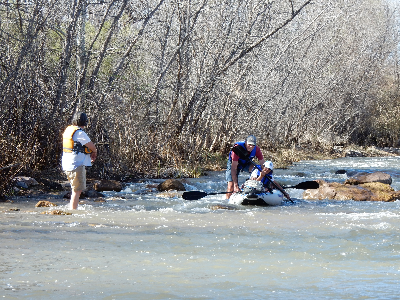 Bobbie's butt hangs on a rock. I think we need to call Triple A and get a wrecker. But, being the Man, I put on a Life Jacket and jump into the water, and promptly sprain both ankles as the water is only 3 inches deep. Seeing water pouring into our kayak, Maureen risks her life and swims to save us.

I lose 6 inches off the end of my paddle hitting rocks and the back of Bobbie's head. Note: supplies are still high and dry.
I try to beg a Colt 45 Malt Liquor off a some tubers. They are deaf, evidently, and sign me to go screw myself. Kids nowadays...

And now, an old song from the Monkee's music vault...

Goin' Down
Floatin' down the river
With a saturated liver
And I wish I could forgive her
But I do believe she meant it
When she told me to forget it
And I bet she will regret it
When they find me in the morning wet and drowned
And the word gets 'round
Goin' down
Goin' down
Coming' up for air
It's pretty stuffy under there
I'd like to say I didn't care
But I forgot to leave a note
And it's so hard to stay afloat
I'm soakin' wet without a boat
And I knew I should have taken off my shoes
It's front page news
Goin' down
Goin' down
I wish I had another drink
It wouldn't be so hard to sink
I should have taken time to think
Besides I got the picture straight
She must have had another date
I didn't need this extra weight
I wish that I could see the way to shore
Don't want no more
Goin' down
I'm goin' down
And now I see the life I led
I slept it all away in bed
I should have learned to swim instead
And now it's really got me stumped
I can't believe why I jumped
I'd like to get my tummy pumped
I can't believe they drink this stuff in town
This dirty brown
Goin' down
Goin' down
I wish I looked before I leaped
I didn't know it was so deep
Been down so far I don't get wet
Haven't touched the bottom yet
This river scene is gettin' old
I'm hungry, sleepy, wet and cold
She told me to forget it nice
I should have taken her advice
I only want to go on home
I'd gladly leave that girl alone
What a way to spend the night
If I don't drown, I'll die of fright
My pappy taught me how to float
But I can't swim a single note
He threw me in to teach me how
I stayed there floatin' like a mama cow
And now I've floated way down stream
I know this has to be a dream
If I could find my way to shore
I'd never, never do this anymore
I'll give you three, I've been down nine
I'm goin' down just one more time.
Goin' down.
Goin' down.
Now the sky is gettin' light
An everything will be alright
Think I finally got the knack
Just floatin' here lazy on my back
I never really liked that town
I think I'll ride the river down
Just movin' slow and floatin' free
There's a river swingin' under me.
Waving back to the folks on shore
I should have thought of this before
I'm floatin' on down to New Orleans
Goin' to pick up on some swingin' scenes
I know I'll know a better day
I'll go down groovin' all the way
Goin' down
Goin' down