The "Soup Nazi:" Authority Complex, Or Just A Bad Day In Paradise? 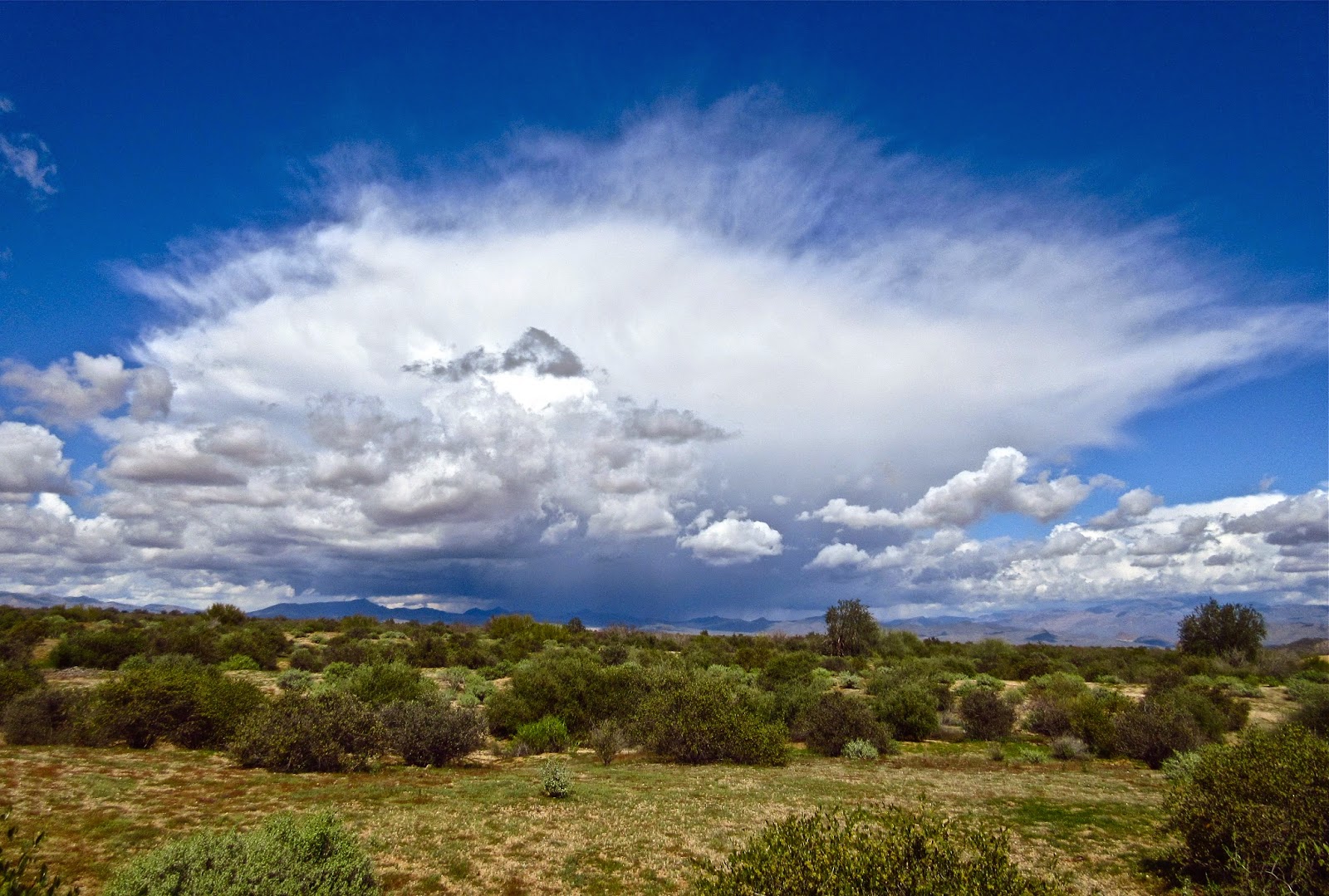 Thanks to the "Soup Nazi" episode of Seinfeld, we have an unflattering but accurate moniker for antisocial, rule-obsessed authoritarian types in positions of power. I've got a couple of bones to pick in the next couple of posts, starting with an acrimonious Camp Host that verbally venom-ized Bobbie, then the imbecilic Maricopa County Park Merry-Go-Round Regulations that obliterates the joys of camping like a pipe-bomb. Moving on now, from Oak Creek to Cave Creek to Up-a-Creek without a weapon when I really needed one… in the lush, mountain biking Mecca of McDowell Mountain County Park.

Let's begin by saying that Bobbie and I are pretty easy going and fair-minded. We are law abiding, for the most part, friendly, and pay our taxes and campground fees without whining just like the rest of you. Bobbie comes by her "mellow yellow" naturally, while I'm more of a work in progress. Petulance is one of the many "hazards of being Male," our "buttons" are big and easily pushed, like on those humongous phones for the nearsighted. At nigh onto 65 years old, however, my temper is fading, right along with testosterone levels. Coincidence? I think not. In medieval times it was demonstrated that neutering males was the most effective way to reduce violent crime. Rumors of the demise of my manhood are, apparently, greatly exaggerated… as you will see. Paraphrasing Led Zeppelin's Robert Plant, if you squeeze a lemon hard enough your going to get juiced ("Whole lotta love, babump babump babump…") 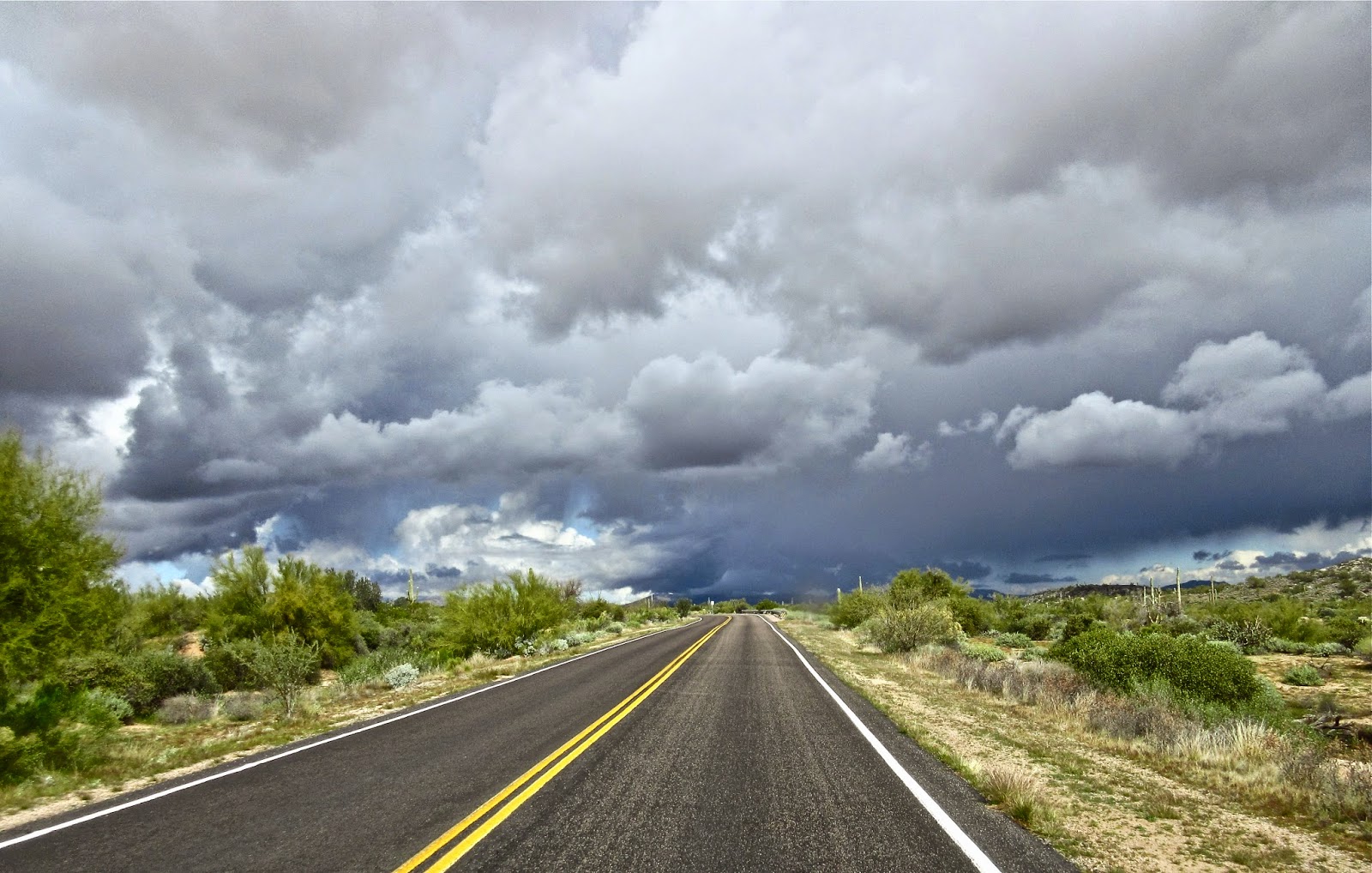 We used a foul weather day to go from "overflow" at Cave Creek County Park to McDowell Mountain County Park, a camp propagandized by Life's Little Adventurers and Newbie Hiker-Mama, Suzanne, that out-rocks any other park in the Valley of the Sun… if not the world. Grudgingly, I can now affirm that they were (swallow hard) spot-on in their assessment. Being "scooped" by relative newbies on one's "home turf" is a tad humiliating. 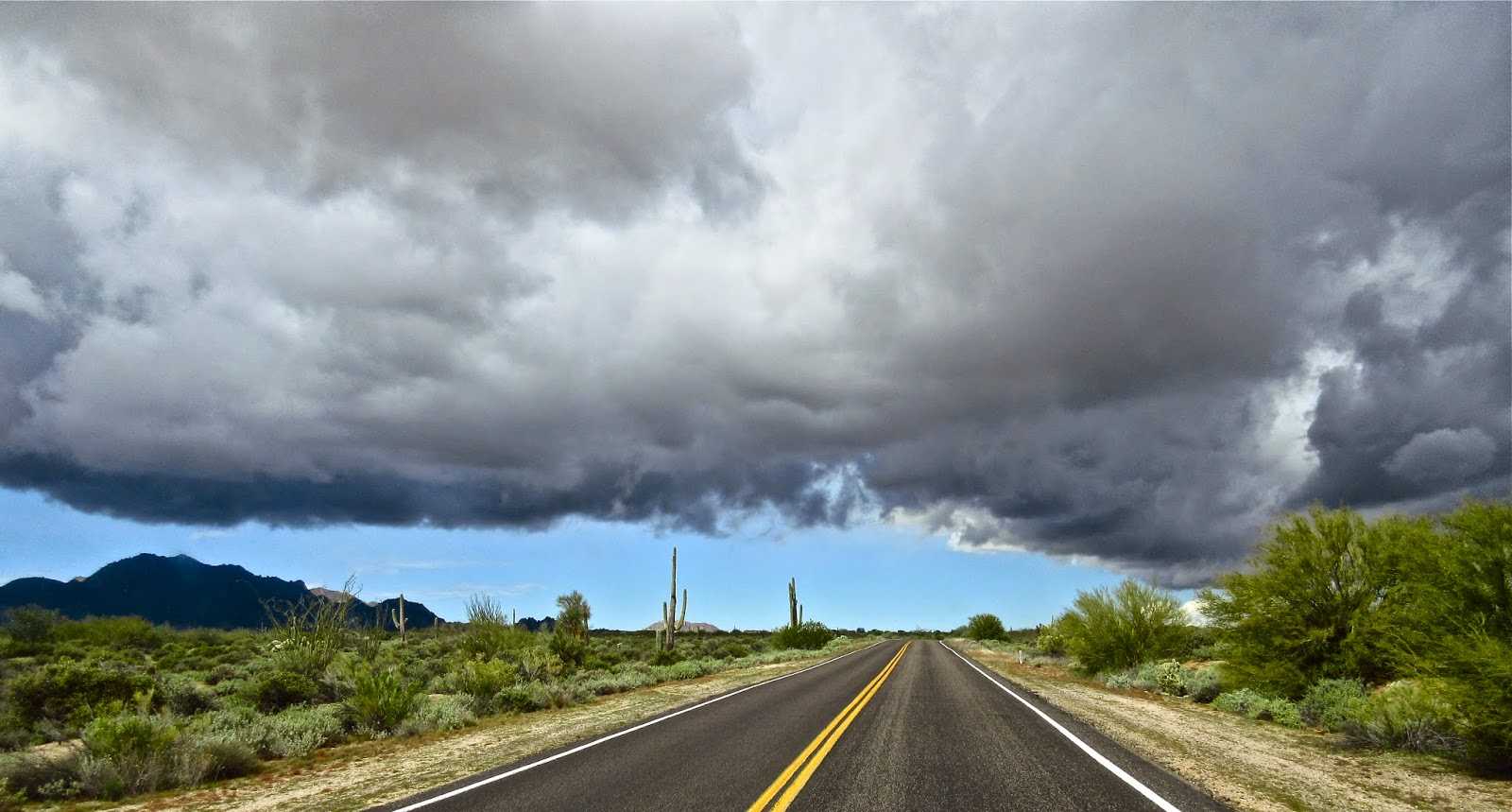 I like my clouds like I like my women—low-down dirty, dark, and threatening. Man-oh-man, I got more than I bargained for on the way to MMP. Intense drama played out overhead, and I could barely keep Goldie in her lane for all the gawking and photographing through the windshield. Though barely March, it looked more like July—monsoon-like, with strobes of lightning radiating from the depths of night-black horizons. It was reminiscent my earliest childhood memory, as a spellbound five year old, eyes and nose plastered to the living room window, gaping and giggling at violent flashes of lightning and subsequent boom-rolls of thunder that rattled windows and turned my innards to froth. 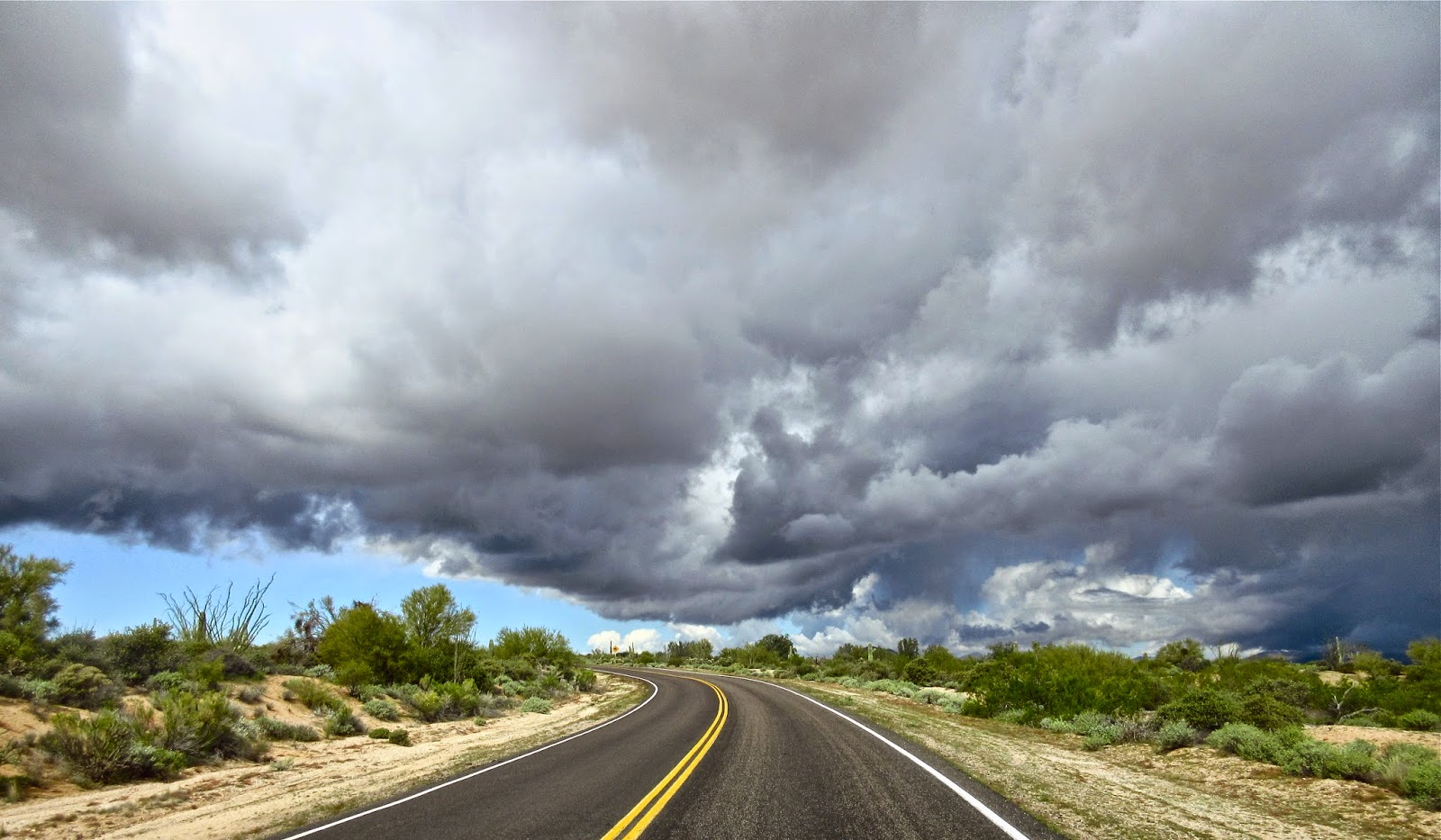 Camp hosts at Cave Creek were pretty laid back with the halfwitted, ill-thought-out policy that forces overflow campers to pack up and move to any site that becomes available—even if it's only for one night, and regardless of the fact that you will be packing up and moving back to either overflow or a different vacant site the very next morning (insert Jeopardy music here).

I was hoping we wouldn't have to play "camping roulette" at MMP, that we could either luck into a site where we could stay for several days or go to overflow and stay put. I will explain the insanity and frustration this Govie "monkey wrench" causes in the next post, but first, a little episode with the Soup Nazi… "No Pepsi. Coke!" 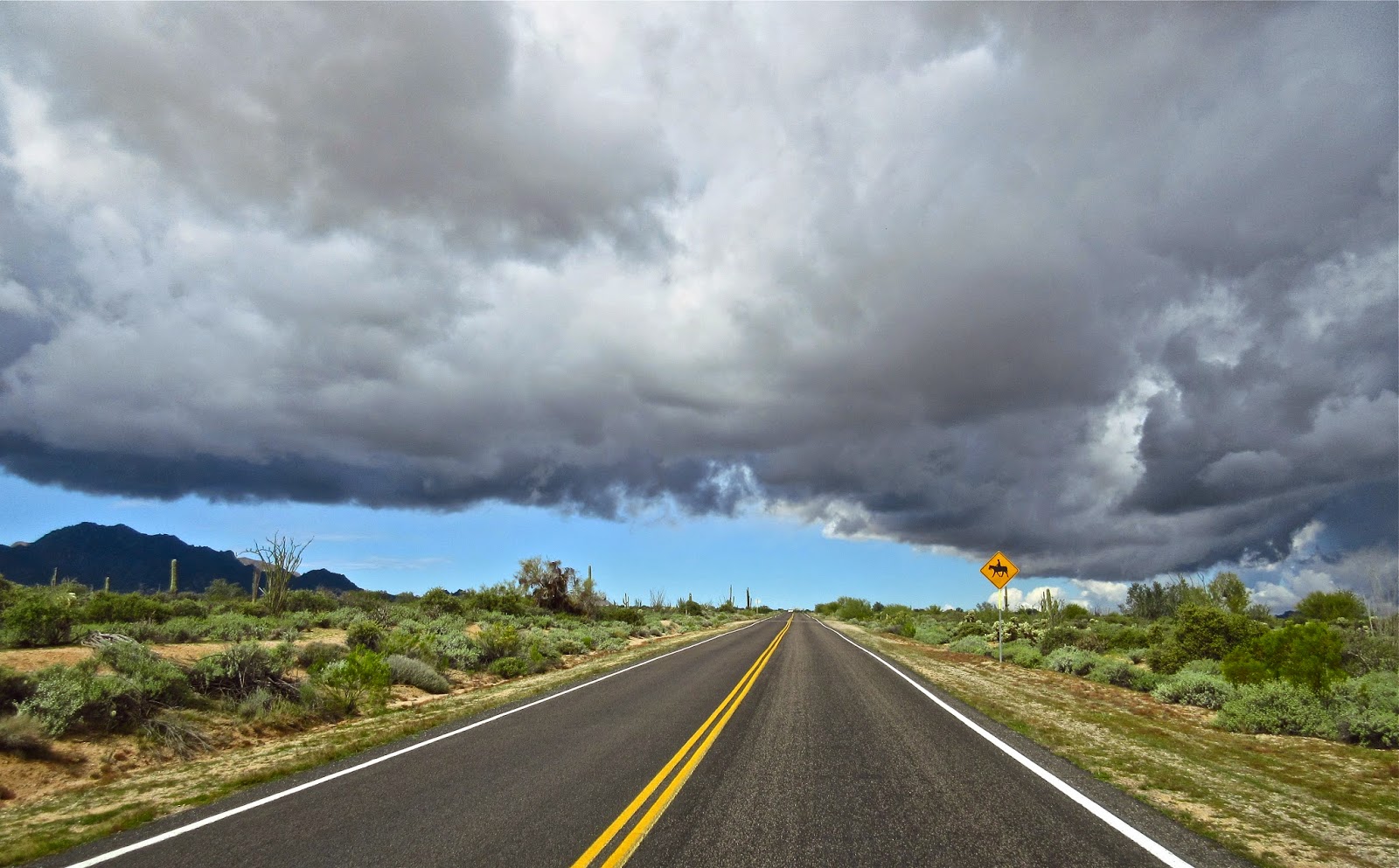 Working folk generally use National Park, Forest Service, and/or County Campgrounds to get away from life's hassles, even though it could be argued that camping is often a greater hassle. But, at least it's a break from the day-to-day shit-grind that get's piled on plates at work and home. Some of those campers and most full-time RV'ers have encountered the occasional Deputy Dawg camp host, a guy or a gal who delights in authority, loves the "law" enforcement aspect of their job, and neutralizing the outdoor rejuvenation experience so desperately sought by people pests, just trying to get away. 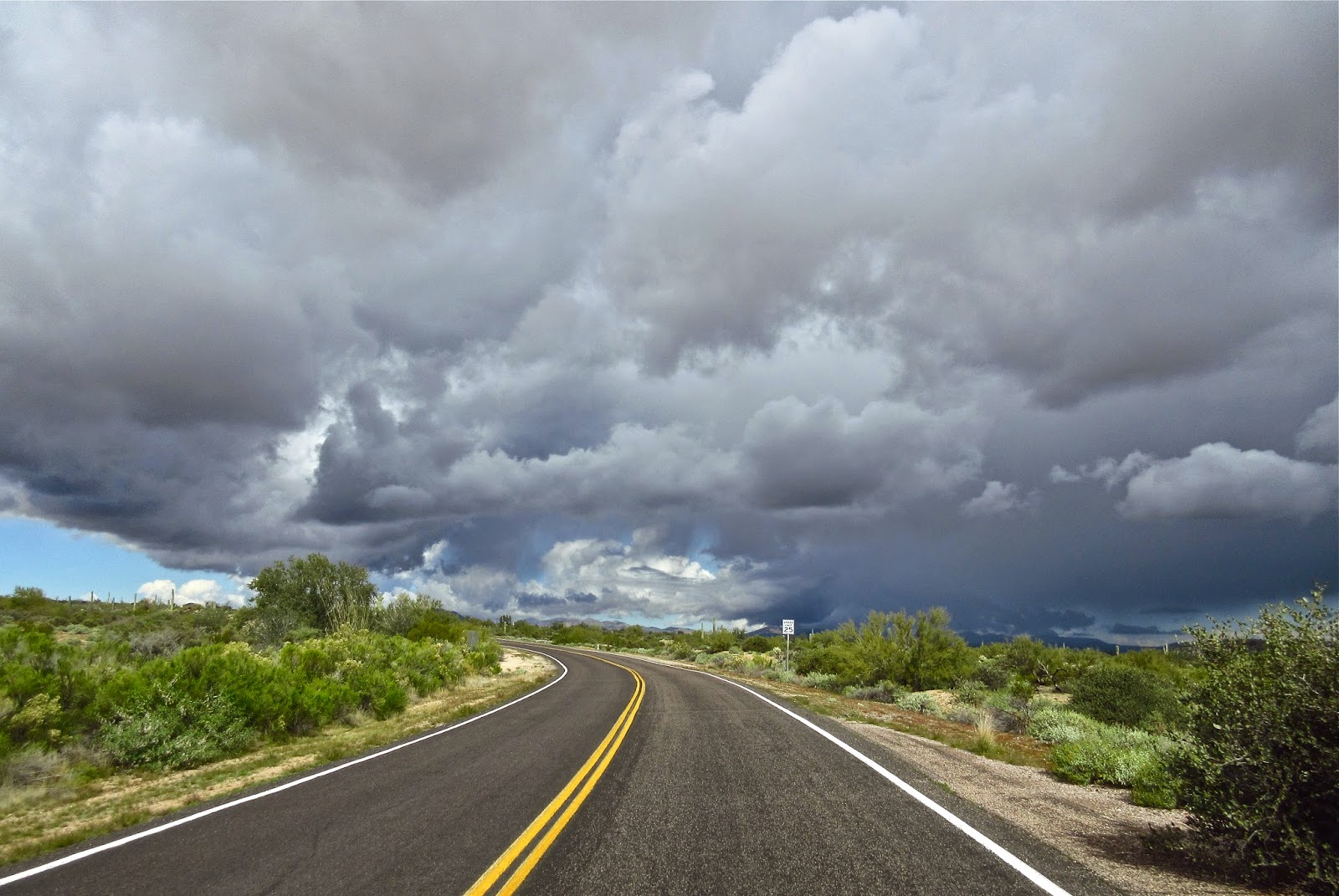 Meet "Adolf." He shall remain anonymous in an effort to spare possible embarrassment/unemployment, even tho he deserves both. I will do my best to give him the benefit of the doubt, tho, just in case he was having a bad day. 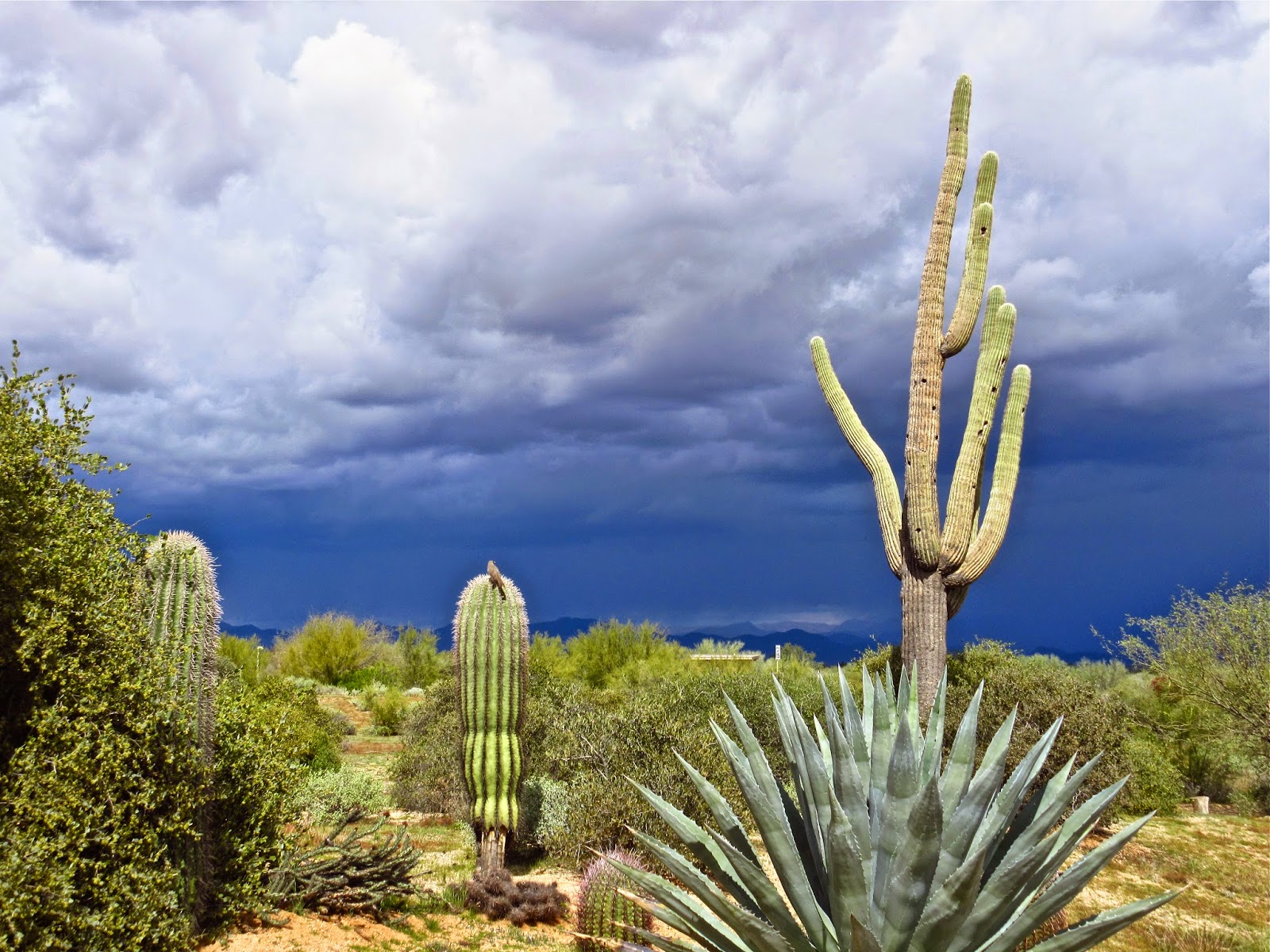 Imagine being able to live/camp in such a lush environment for free, in exchange for a measly few hours of "work" per week. 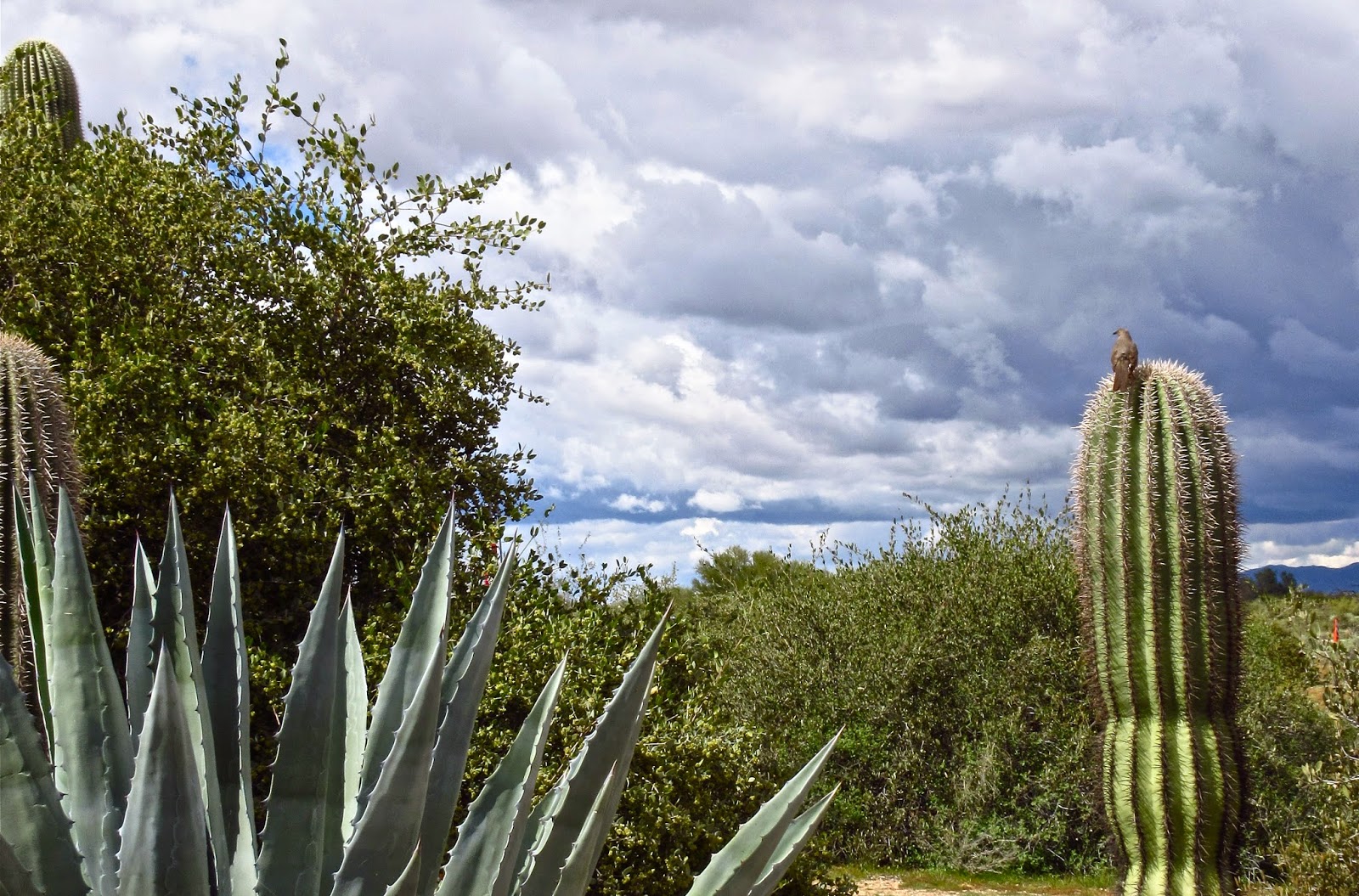 Under dark, threatening skies, we roll into MMP's entry station. Out of courtesy, I shut Goldie's motor down so as not to gas the attendant. I'm directed to go the park office and check for vacancies and registration. So far, so good.

It's almost noon by the time we get to the office. I inquire about going to overflow and just staying there for several days—it's 20 dollars per night instead of 30, and we don't need "hookups." But the roulette god was not with us, because she had a site come open "just now;" it seems someone left a day early. Now a more astute camper would have been suspicious.

I knew the drill, being familiar with Cave Creek County Park, we would have to move to either overflow the next day or to a another site… here we go, round and round.
"You know," I said, smiling and in my kindest voice, "there's got to be a better way to do this." I could see from the glare that I touched a nerve, one that had already been trampled to death.
"I don't make the rules, I just work here."
"I know, don't shoot the messenger, right? Ha. It's just that…"
"Next"

Okay, so we did as told, went to check in with the camp host of our loop to see if our site was ready. Apparently, before a new tenant can take possession of their site, the gravel must be raked, the drive swept, and the fire pit cleaned out. So I stop and inquire with the Mrs Host at her RV. She gets on the radio to Hubby (henceforth known as Adolf) and asks if site so and so is ready. He doesn't sound happy, but that's about all I can make out. She says that our site is still occupied, and to go wait in overflow and come back at one o'clock. We chat for a while, she was nice… a biker.

As I'm making my way around the loop to the exit, I notice that our site is vacant. Ah ha! Maybe we got lucky and the tenant is gone. The site is pristine, the gravel is nicely raked with parallel lines, and there is no wood beside or in the fire pit. I back in, then tell Bobbie to drive on around to where Mr camp host was (we could see him raking gravel across the way) and ask if it's indeed ready for us. It certainly looked fresh and tidy.

I stay in Goldie, don't hook anything up, watching Adolf dragging a rake around like it's a plow. Bobbie pulls up, they exchange a few words and she's right back in the car driving away. Cool. I figured we we're good to go. But when she returns, something's wrong, she's noticeably upset.

Turns out, as soon as Bobbie pulled up, Adolf spouted off, "That doesn't look like OVERFLOW to me (pointing at Goldie). You were told your site was not ready and to go to overflow!" Bobbie was taken aback by his venomous attitude and body language. She tried to explain… that our site was vacant and raked and swept, and we though it might be ready, and that she had just come over to inquire. He went back to raking, basically blew her off, and repeated that the site was not ready and for us to go to overflow.


As Bobbie explained to me what took place, I could feel blood pressure ticking upward. What a jerk. Even if we were in the wrong, he had no right to treat a "customer" that way, particularly a lady who was only going seek information. I told Bobbie that I'd meet her in "overflow," but that I was going to stop and have a chat with ole Adolf first.

I tried to see it his way. We had disobeyed a direct order, assumed that, since the site was vacant and pristine it was ready. But I had only backed into the site to get out of the road while Bobbie went to see Adolf. It wasn't as if I was out there setting up camp, hooking up to the power station, dragging out lawn chairs. I was still in the driver's seat.

No. This guy is a jerk to speak to Bobbie, or anyone, the way he chose to do. He's an ass, and needed a little instruction on how to talk to a lady. And I, was ready, willing, and able. If we get kicked out, so be it.
to be continued... 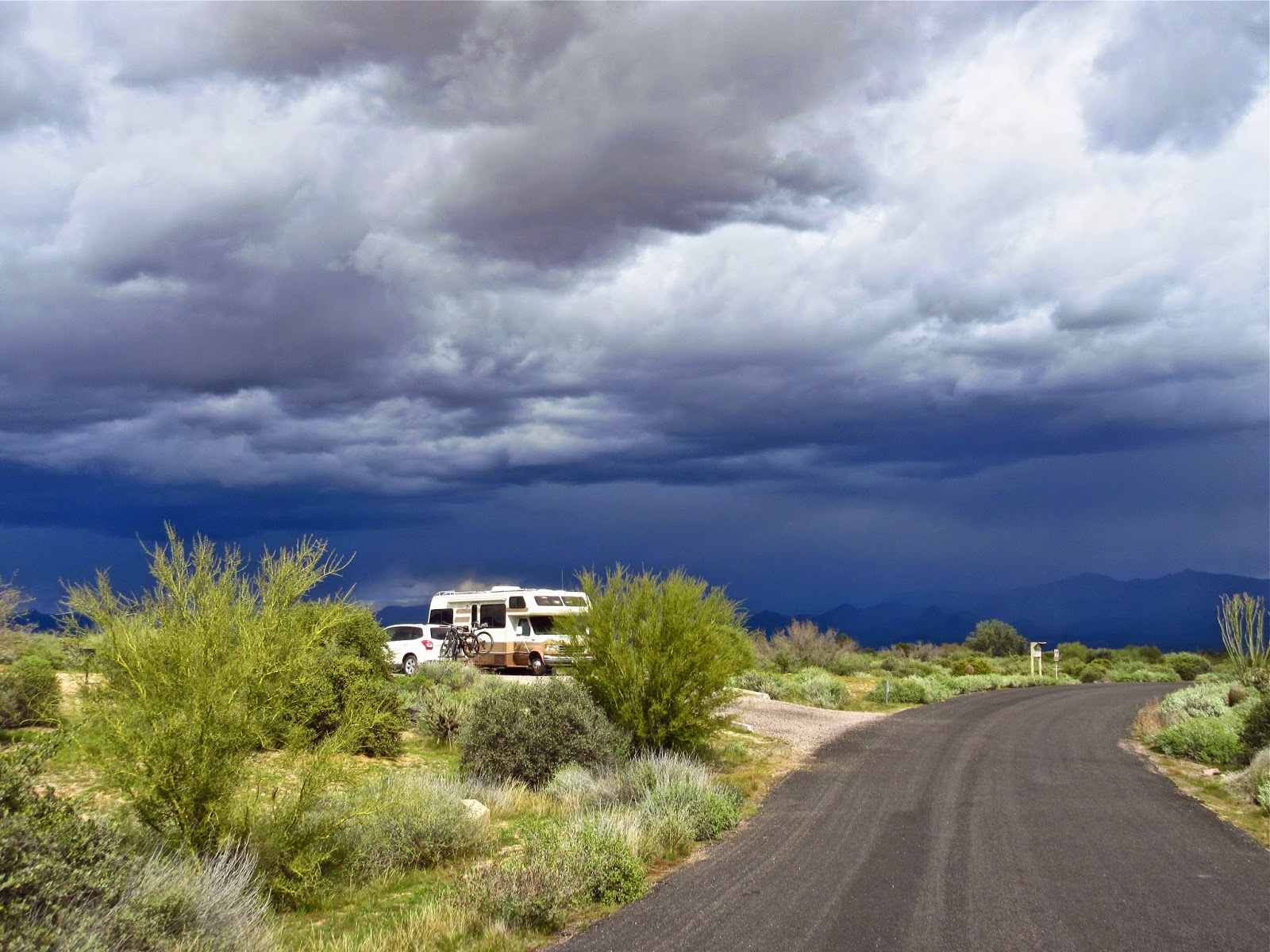 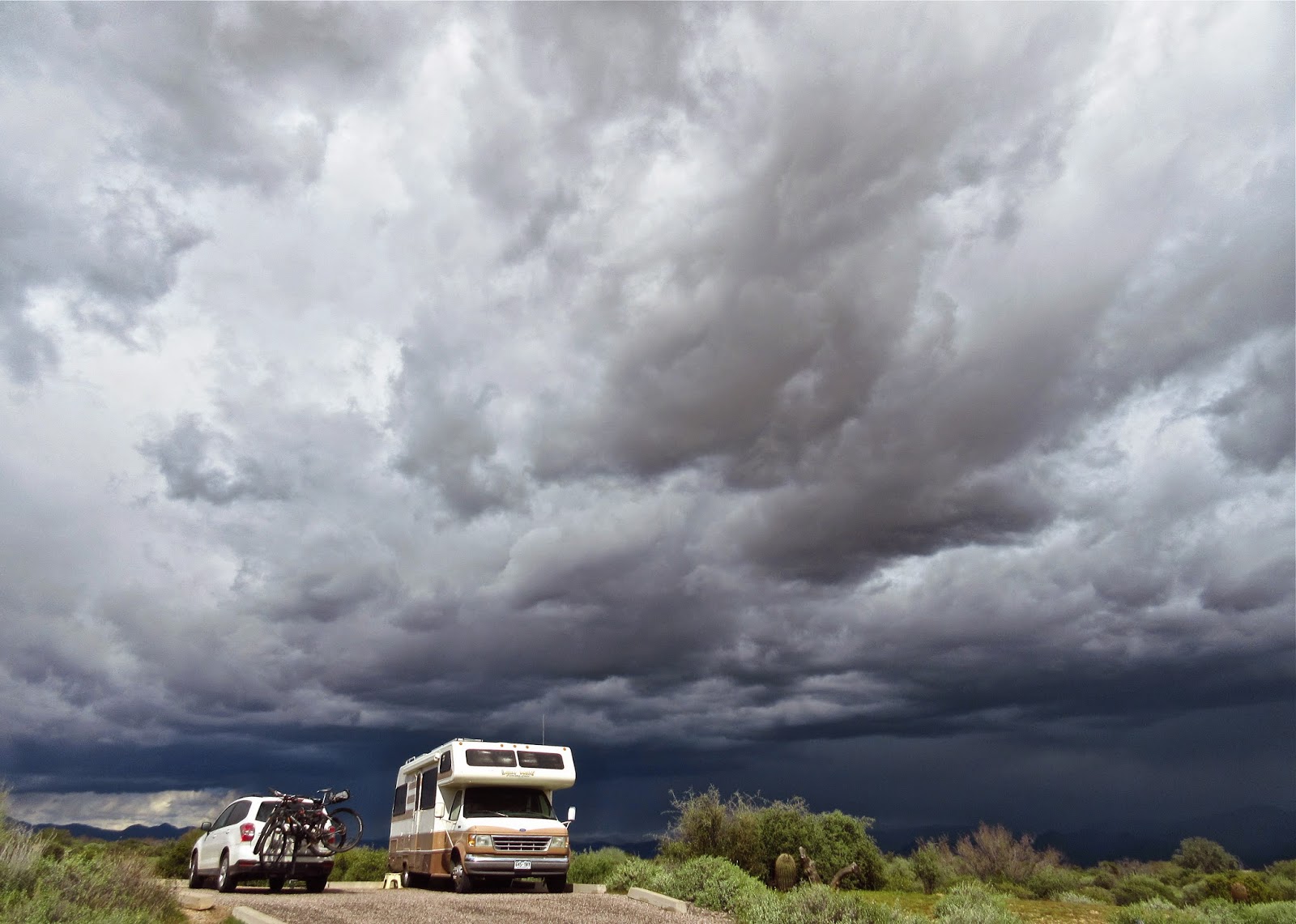 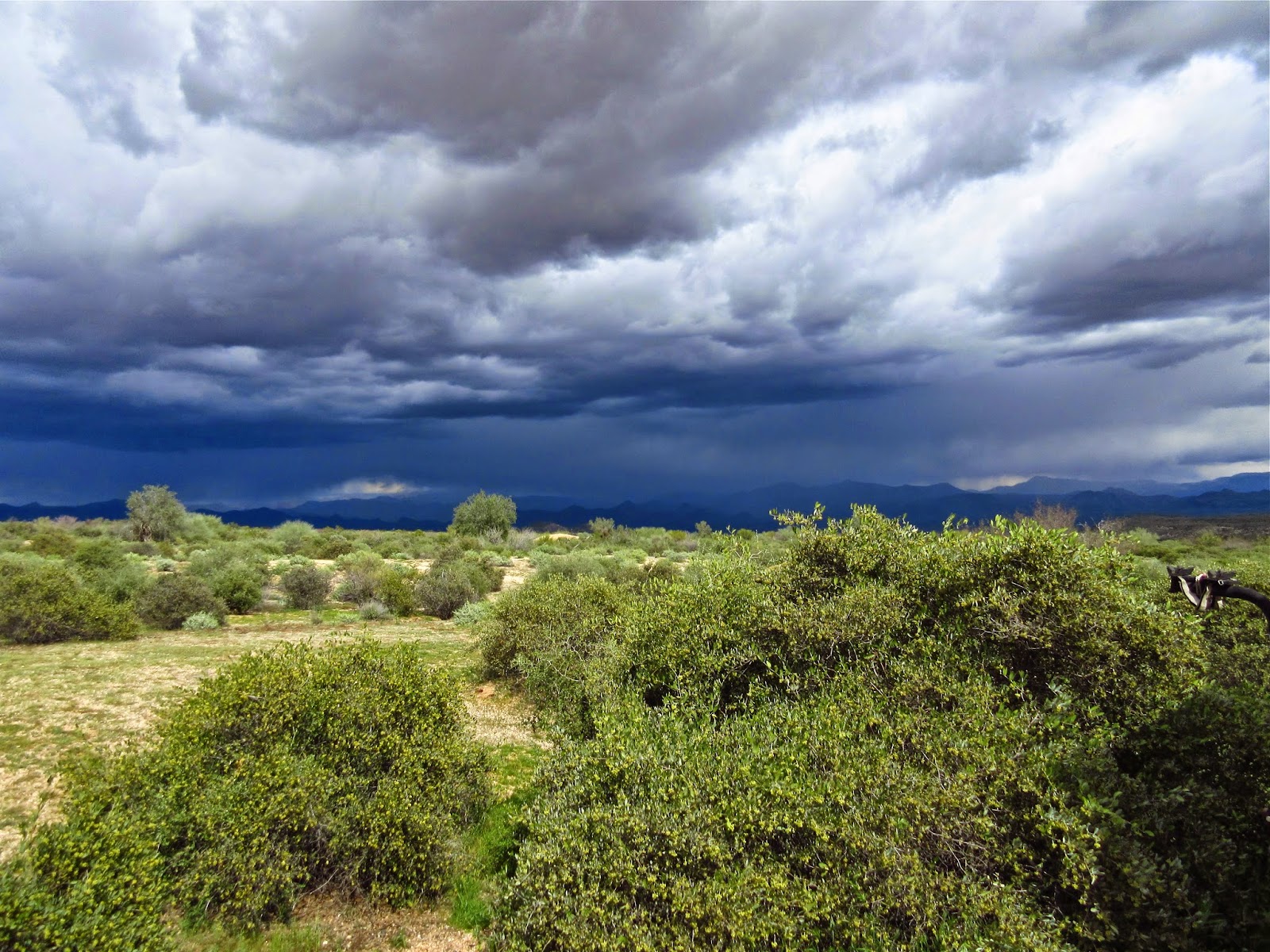