Following New Dreams and Old Footsteps: Finding The Balance Between Home and Road 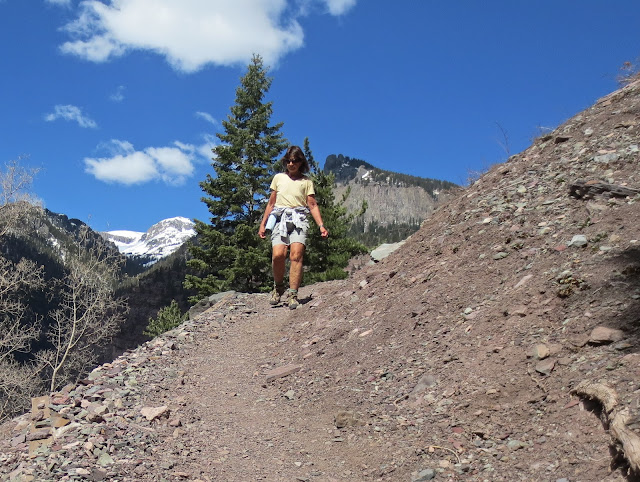 We have been getting out, hiking, biking, and strolling Lovely Ouray's trails and lanes. It's a good feeling when Spring is packing up her bags and Summer is on the doorstep. Our mountain bikes have been getting a lot of use these past few weeks. We ride to Ridgway and beyond, on rural county backroads that hem and haw through valley pastures...greening and growing under dumb cows who know only to eat and shit, eat and shit.

At this writing, deciduous trees are spreading their leaves here in The Crevice. Bobbie goes about her annual ritual of planting flowers in beds and baskets, while I trench in a sprinkler system for our tiny lawn, to rid it once and for all from eyesore hoses that trail like spaghetti May through September.

It's about this time every year that "Sticks and Bricks" makes perfect sense to me, and I'm thankful to Bobbie that she holds her ground on having a home base in a fixed community, one surrounded by mountains. We will start working our part time summer jobs down on Main Street in a couple of weeks...me, at Skol Gallery, and Bobbie at Mountain Fever Gift Shop. It only puts a bandaid on the hemorrhage from savings, but every little bit helps. Most importantly, "part-time" allows ample-time, to chase receding snows up-mountain to wildflower gardens. It's a wonderful balance, one I don't admit to very often out of fear of offending the other woman in my life, the ever alluring Ms Road.

We had unexpected company show up on our doorstep yesterday afternoon. Longtime BCB reader John, and his lovely wife Mary Wells, came calling with a growler of unfiltered Ouray Brewery Ale. What a treat to meet and sip. Both are recently retired from "corporate" and "academia admin" in Kennebunk, Maine... a stone's-throw upriver from Kennebunkport. They rolled up our steep driveway in a Navion Class C, powered by a Mercedes diesel that gets a whopping 20 MPG (sigh).

Eventually, they would like to do some road-based volunteer work in or near a National Park. John has both a love affair, and prior Sierra Club volunteer experience, with Chaco Canyon in New Mexico. But Mary is in no hurry to commit to "work" having just stepped off the "treadmill." See the entire west first, guys, then go to work (volunteer). Good luck, and thanks for stopping by with a growler :)) 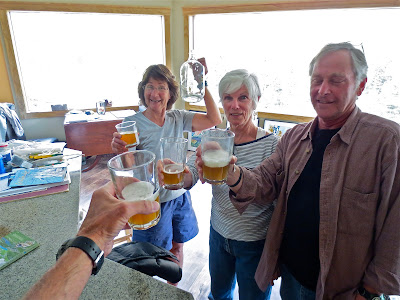 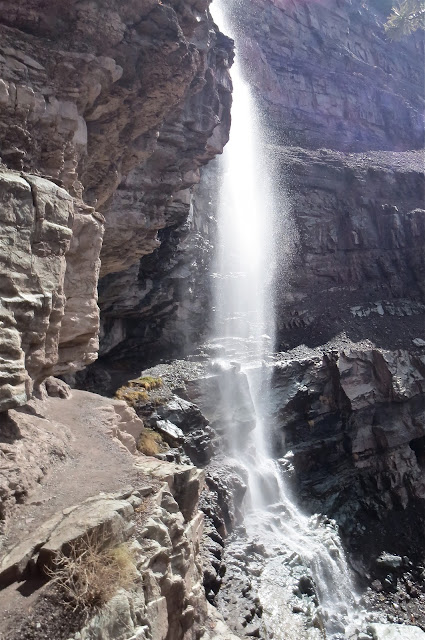 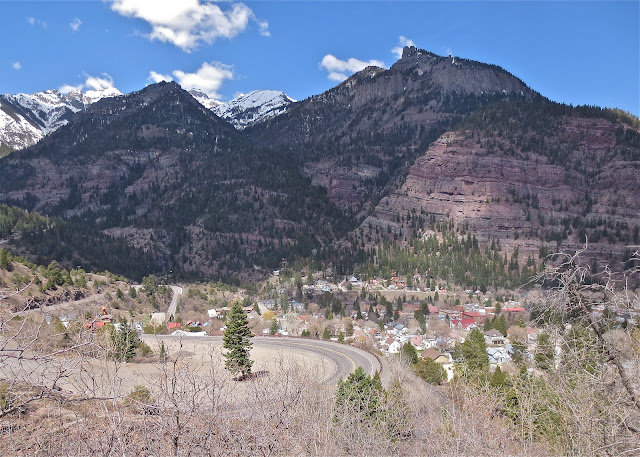 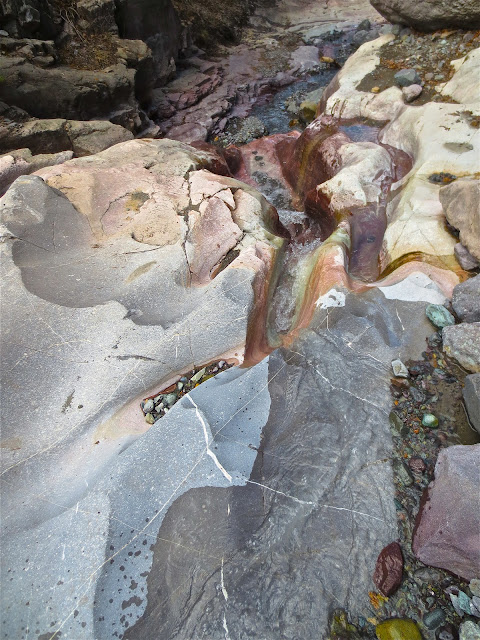 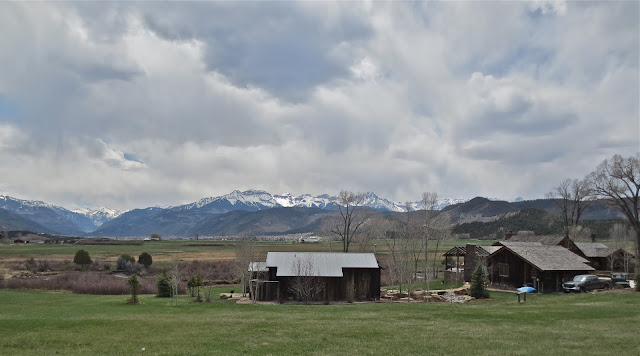 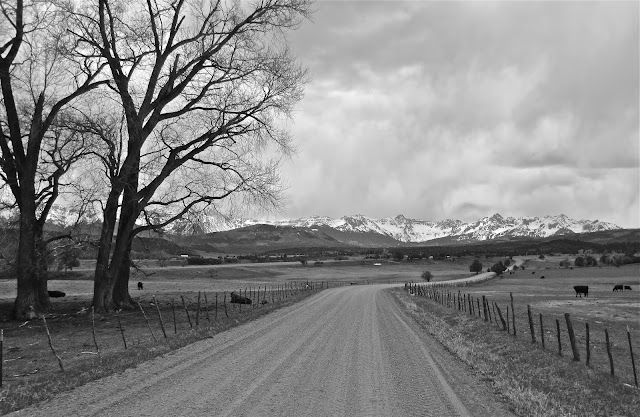 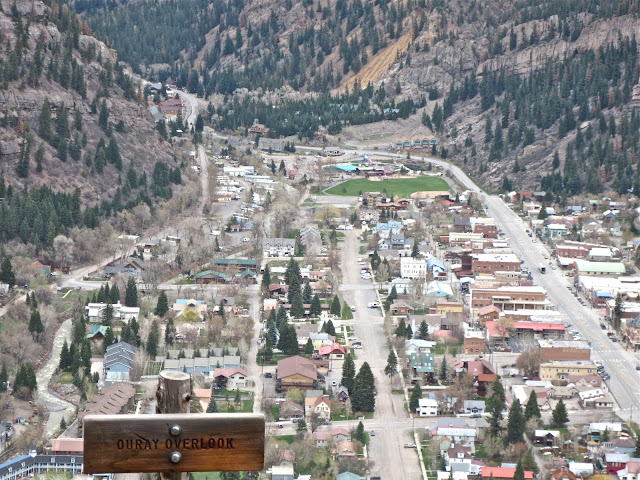 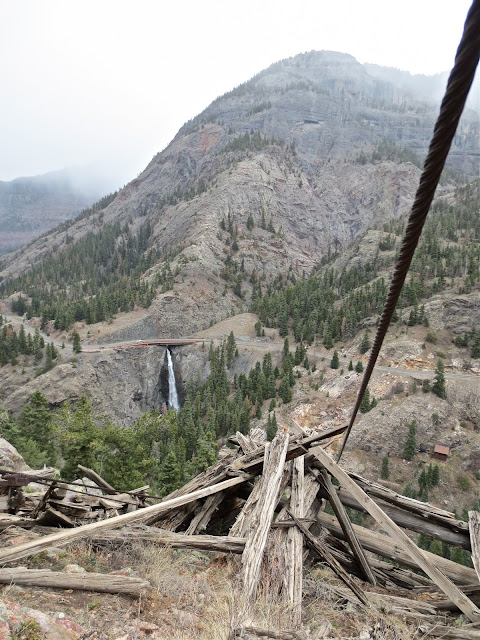 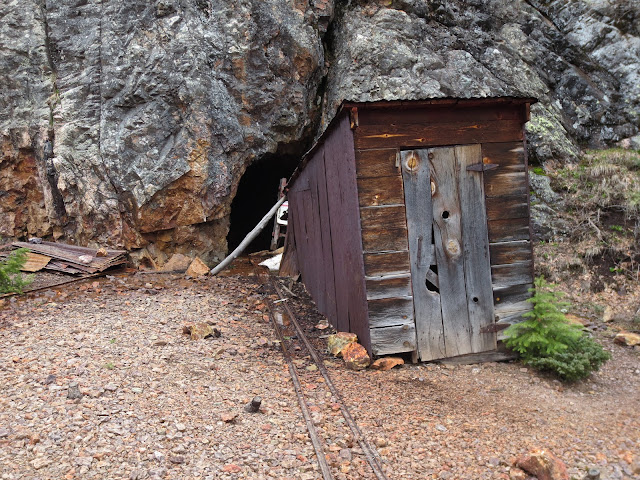 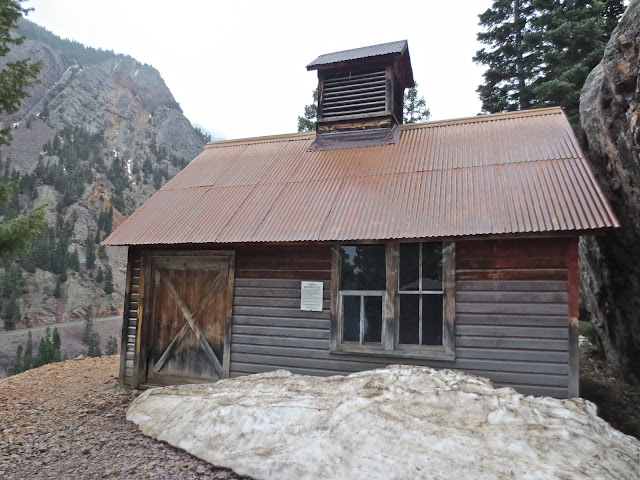 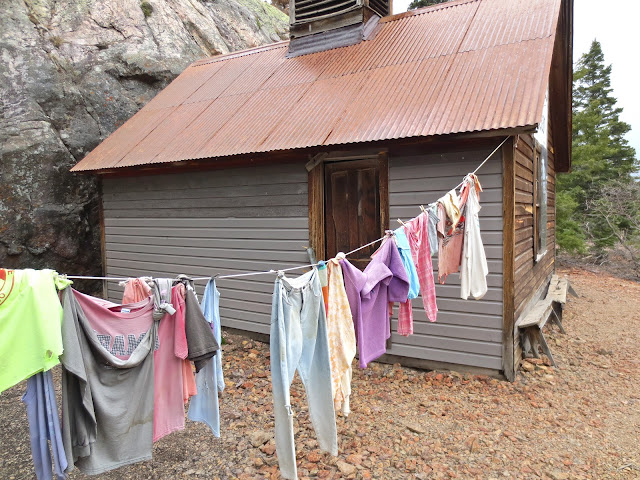 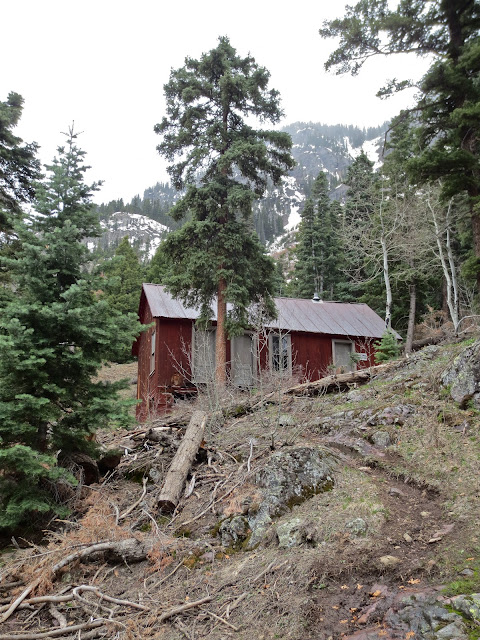 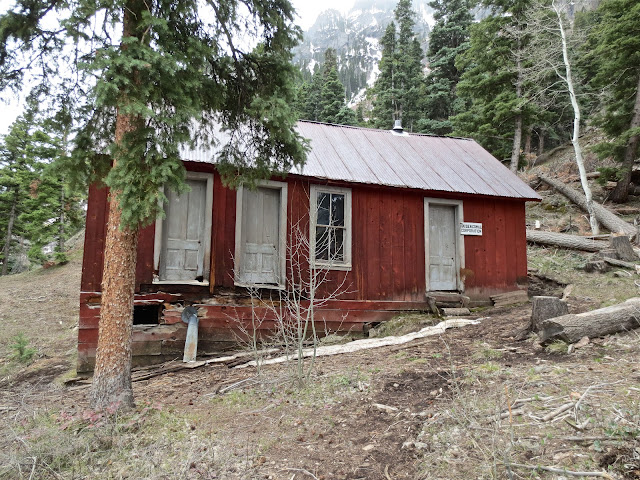 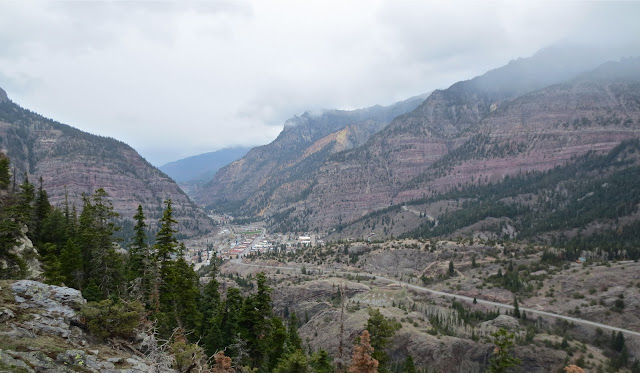 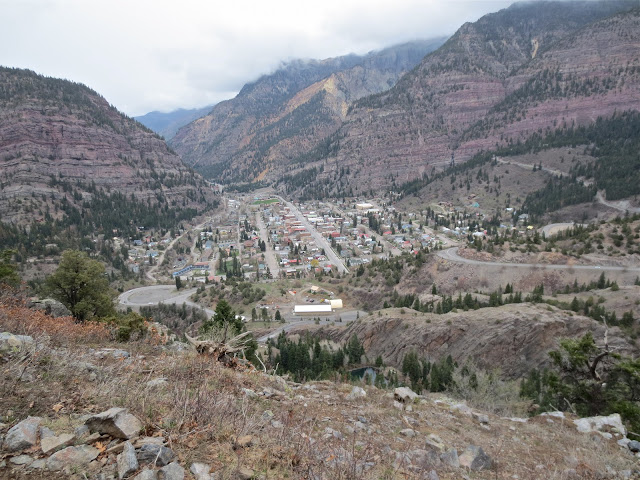 In the spirit of "retracing old footsteps," here are a few clues to the next mystery location. Can you guess where? 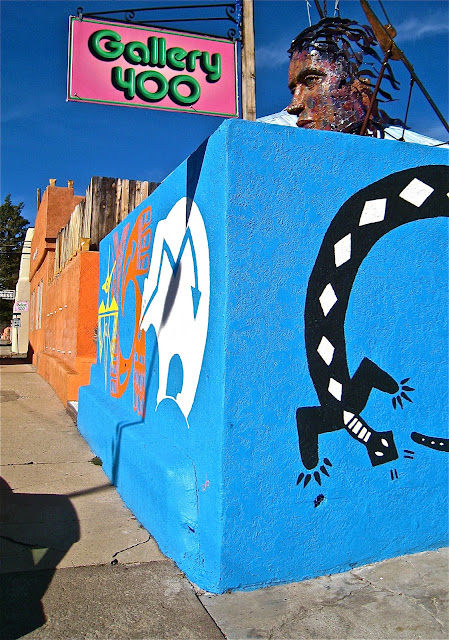 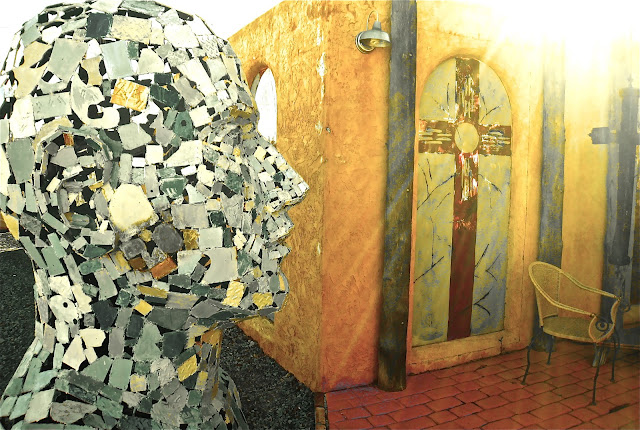 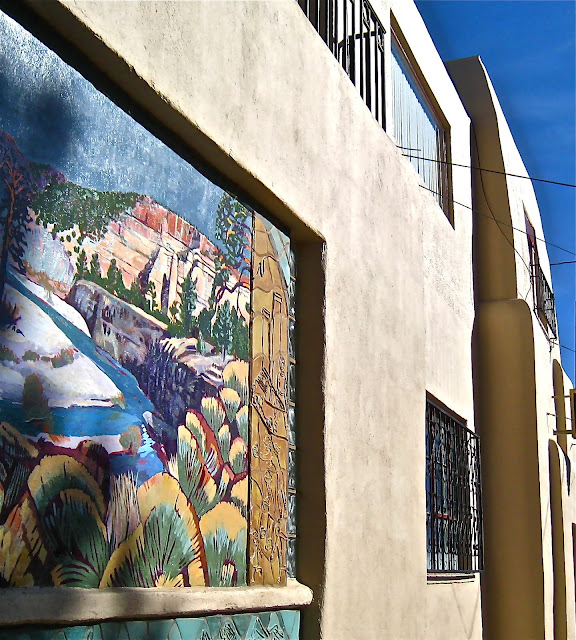 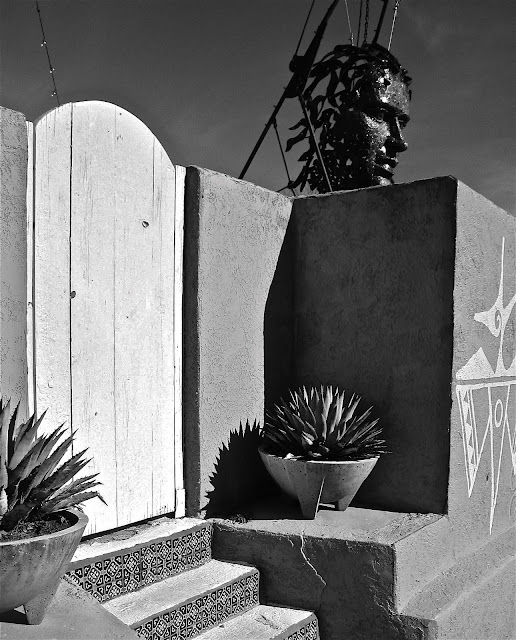 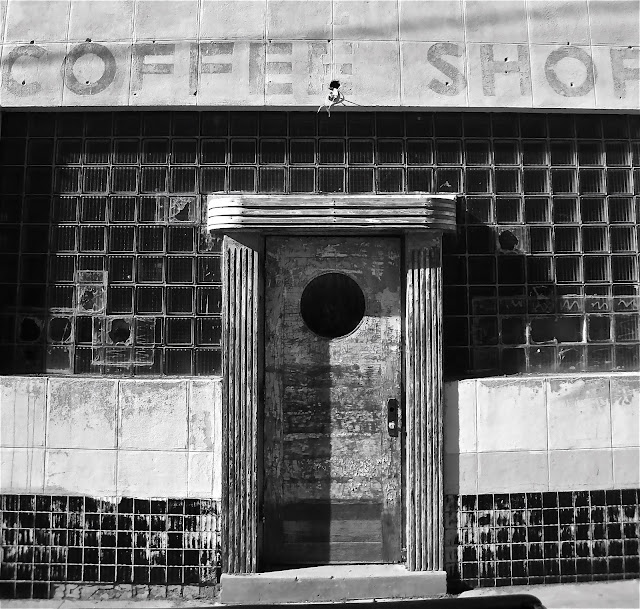 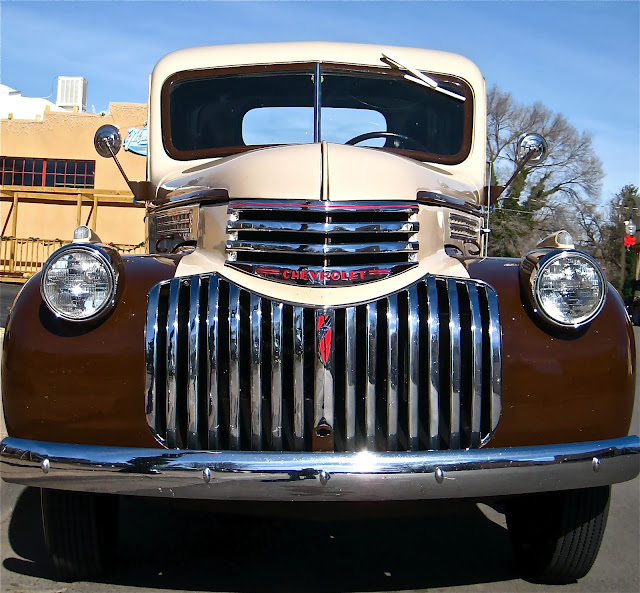 Now, brace yourself for a hard turn north, way up to Athabasca Falls on the Icefield Parkway in Alberta, Canada. The falls are just a few miles south of Jasper, which isn't all that far from the Northwest Territories. It's beautiful. Some day I must show you photos of Jasper, one of the most clean, well preserved, quaint, and lushly flowered towns you'll ever find.

I've stood on the edge of countless waterfalls, trying to capture and freeze the moment, the thunderous essence. Photo after photo after photo. And never have I witnessed the volume, power, uproar—pandemonium—of such a massive river...plundering through its gorge...as I did when standing on the slippery edge of Athebasca Falls. I could hear it from the parking lot... feel it in my chest on the approach. Before I could even see it, I knew it was something special, something bigger than anything Colorado had to offer.

Suddenly, I was standing over it, from a viewing area behind a small fence. Conversation was obliterated, words swept away in a cacophony equal to The Blue Angels on after-burn. A mushroom cloud ascended from the roil, a constant mist of atomized water that had been forcibly raped, pillaged and plundered against jagged rock...a continuous atom bomb. Beyond our fence the rock glistened white and slick...a grotto of lush moss clung to patchwork soil, and fell away sharply into the abyss. 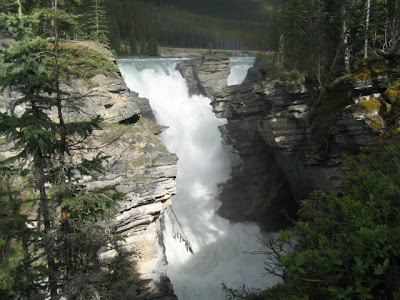 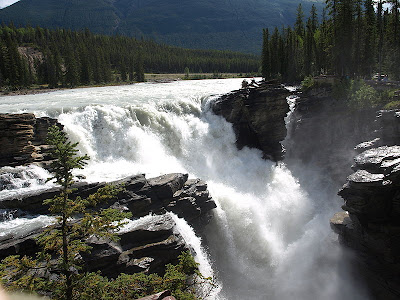 Below is an article by Sarah Rogers, in Jasper's "The Fitzhugh" newspaper, dated August 17, 2006. We arrived at Athabasca Falls a few days after this tragic accident, but I didn't know about it until later, while perusing The Fitzhugh over expresso and pastries in a local Jasper bakery.  I had hopped the same fence in order to take photos, just as the tourist in the article below did. It is a graphic cautionary tale; don't read it if you are squeamish.

In a tragic accident, a tourist visiting Athabasca Falls died Monday afternoon after slipping on the falls’ rocky incline.
Just after 3 pm on August 14th, a 36-year-old tourist vacationing from Italy appeared to have climbed over one of the protective railings near the top of the falls to take a photograph. His wife was watching from behind the barrier when he lost his footing and plunged into the water below.
The victim’s name is being withheld until the investigation is complete.
Public Safety Warden Garth Lemke, who was in the Parks Canada-commissioned helicopter during the search and rescue, said the individual went over the very top left-hand side of the falls at approximately 3:15 pm.
Shortly after, dispatch received a 911 phone call placed by the wife of the victim. A team including wardens, RCMP, a helicopter and a jet boat was immediately sent out. The woman was taken onto an empty tour bus to be treated for distress by a doctor. A translator from Jasper was employed to help with the language barrier.
An hour and a half later, at approximately 4:41 pm, the victim was found by the search and rescue boat four kilometres downstream from the falls. The man was pronounced dead at the scene. Wardens in the helicopter retrieved the body, landing at a pullout where police and paramedics were waiting.
Employees of Raven Raft Tours had just launched four rafts, with customers, at a put-in 400 metres downstream of the falls when wardens showed up on scene searching for the fallen tourist. As a warden boat approached, the rafters who had begun their float spotted the victim face down in a nearby eddy. Raft guide Marc Amormino and his co-workers were trying to vacate the scene, but when it became clear that the victim was in the vicinity they in turn distracted their younger clients so they wouldn’t witness the grisly scene and continued with their raft ride.
“It looked like every solid structure in his body had been broken,” Amormino said about the victim. “It wasn’t a pleasant scene.”
During the rescue, the Athabasca Day Use area was closed for rescue operations, although several dozen visitors remained in the area.
“We tried to completely shut it down,” said Lemke. “Less distraction makes us more effective. At the rush of the moment we did the best that we could.”
In the past 20 years, the park has reported five fatalities at Athabasca Falls, all of the accidents occurring in a similar location. Lemke recalled one male canoeist went over the falls several years ago and actually survived. He called that incident a unique circumstance.
“I think just the entire element of water is underestimated,” Lemke said. “Moving water itself tends to catch people off guard.”
Lemke said that it can take anywhere from a week to a month to confirm the exact cause of death. Chances are the victim died from the impact of the fall into the rocky waters, but hypothermia can also be fatal if a victim survives the fall but is submerged in the water for an extended period of time.
The area where the individual fell is blocked off by protective railings, along with signage warning visitors to stay back.

I couldn't fathom some guy surviving Athabasca falls in a canoe (though I suppose he wasn't in it long), a padded barrel, maybe. But it happened. I read it in The Fitzhugh, over coffee and danish, from the safe confines of a bakery in Jasper. I can't help but wonder how it changed his life. The irony is, we are astute consumers, buying cars with no less than five star safety ratings with a minimum of eight airbags. And then we use this car to transport us to Class V rapids or mountains...and paddle on when we should have portaged, or climbe on when we should have turned back. Yes, I hop a lot of "fences" in order to get an adrenalin fix and a pretty photo. I'd like to say I'm older and wiser now, but I'm afraid it would be only half right.

Posted by Box Canyon Blog.com at 8:22 AM