We coffee'd up in the alpine glow of predawn. Lovely Ouray twinkled below, fast asleep except for a groggy dough kneader at Artisan Bakery. A double shot of caffeine jolted a few belly butterflies awake. I began to second-guess the previous nights plan, conceived over a bottle of California Merlot while staring into a dream inspiring Super Moon. It seemed ambitious now... bordering on dumb.


Hikes to mountain passes this time of year are fraught with snow and thigh deep "postholes." I couldn't come to terms with the awkward ordeal of clomping up Red Mountain in snowshoes; that's two steps toward the season I've been trying to shed... I put that monster back under the bed until Christmas. I'm in Shorts now. Hand me a T shirt, some sunscreen, a ball cap, backpack and food, and let's go get high.


It was forty two degrees as we departed Lovely Ouray... thirty four by the time we nosed Sue Bee into a snowbank at the base of Red Mountain. Corkscrew Gulch's Jeep trail disappeared into a Spruce and Fir thicket of shade... a series of rolling mounds of "white plague." Season jumping fools, I thought.


I noticed puddles skimmed with ice, each a work of temporary glass art. Fortunately it was cold overnight; the mounds of snow were frozen enough to support our weight. We skedaddled up Corkscrew, striking a pace that flattened goosebumps just short of breaking a sweat.


Rays of morning sun found us about a mile up. I stopped and bathed in its warmth... waiting for Bobbie to catch up. She joined me in the solar tub and then we resumed my goal of making a lofty ridge-line pass... where Ouray county meets San Juan.


The upper basin is steep walled... riddled with avalanche and debris. Switchbacks went missing under a mess of alpine confetti, branches, boulders, and splintered trees dirtied our route. Winter snow builds and builds in places like this... gravity pulling on its hair trigger ear like an angry mom. Suddenly, megatons of ice and snow let go. It rumbles and thunders with the force a small atom bomb... nuking everything in it's path. It looked like a war zone... twisted "victims" laying dead everywhere. We took advantage of the consolidation effect of several spent avalanches... shortcutting Corkscrew's profusion of switchbacks.


Just above timberline Bobbies hoodie went up. Powerful wind gusts pummeled as we neared the pass. Chill is factored by wind, especially up here. Thirty degrees feels warm as bathwater in the absence of wind... but it can be life threatening in its presence. I remembered that my Goretex jacket and pants were home, useless, on a shelf in the garage. This is how one becomes a statistic, I thought... wondering if we should turn around.


I know Bobbie tires of my tendency to goal orient outings... that I look at a map and set out to achieve a specific elevation or distance instead of just kicking back and letting things unfold with casualness and ease. It's an "I'll sleep when I'm dead" neurosis that I've yet to shake. My goals are better left undercover... it's better that way, until I can outgrow the blasted flaw and take up smelling roses.


But there is another side to that flawed "coin," like when at my lead we push through weather, tired legs, and discomfort... and land a grand bounty in return for the effort. Bobbie's frustration melts like butter in sun in the almighty face of summits and glory. I suppose we are yen and yang in that respect... a good match. She occasionally mitigates my over-reaching, I occasionally push her limits. We learn to appreciate and respect our differences that way.


One last rendezvous a few hundred yards short of the pass; we make the home stretch side by side. I had assumed we'd be the first to top out this season. What a shock it was to find that a road crew out of Silverton had already bulldozed San Juan County's portion of Corkscrew clear up to Ouray County. We could have driven Sue Bee  from the other side.


We sought shelter from the wind and made a picnic of Power Bars behind a mound of moss rocks. The pass was ours and ours alone. Cottonball clouds welled over Red Mountain, dotting a deep blue sea of sky. As much to get warm as anything, we zoomed down... glacading various avalanche chutes to protective stands of timber, then post-holed our way home through sun softened snow. My eyes stung from the sheer brilliance of a white on red under blue sky outing. It is a good day that leaves one tired from a trek to glory. This evening's IPA would taste well deserved.


CowBoy Brain and Heidi were waiting on our doorstep when we rolled in. They rode the Red Raider over three passes from a meadow boondock above Mancos. Thanks for coming all that way, guys, it was good to catch up. 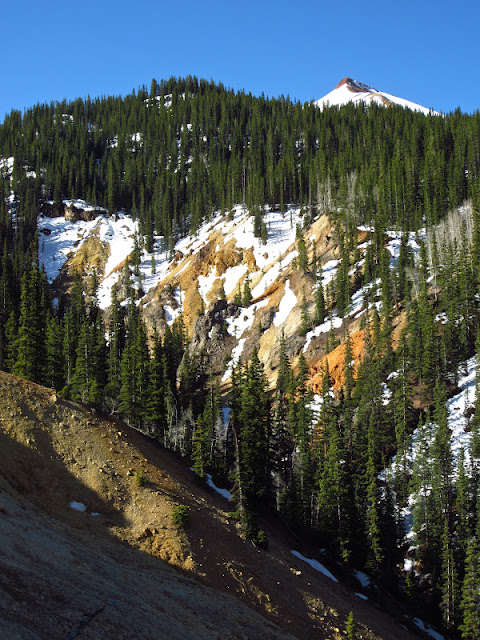 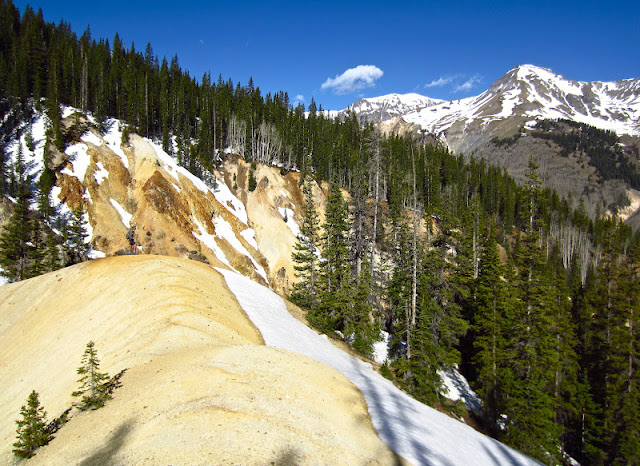 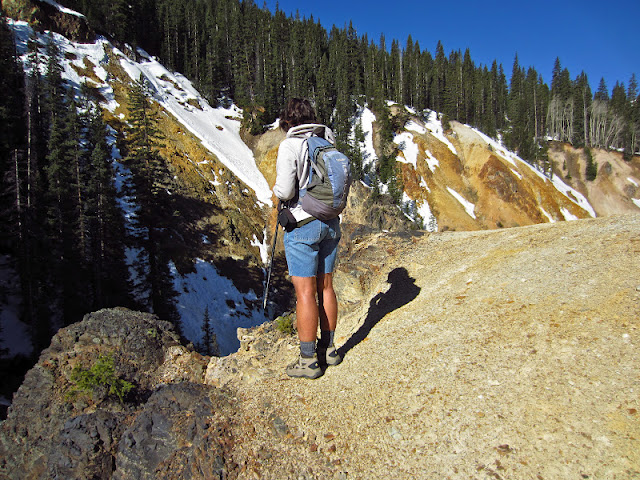 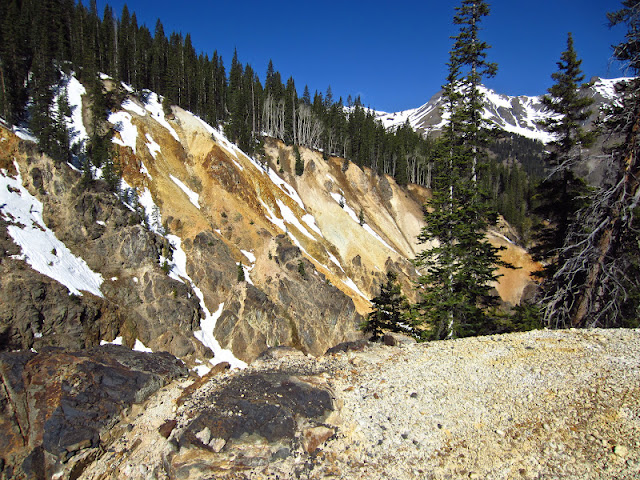 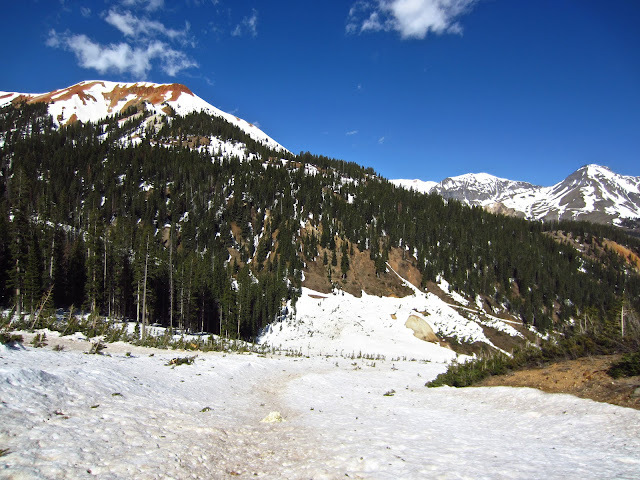 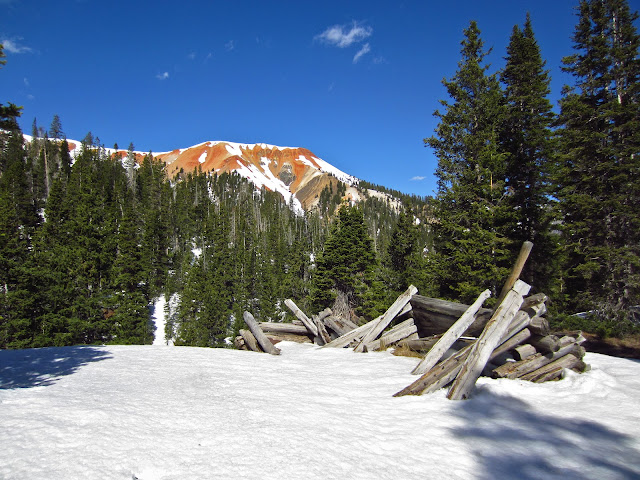 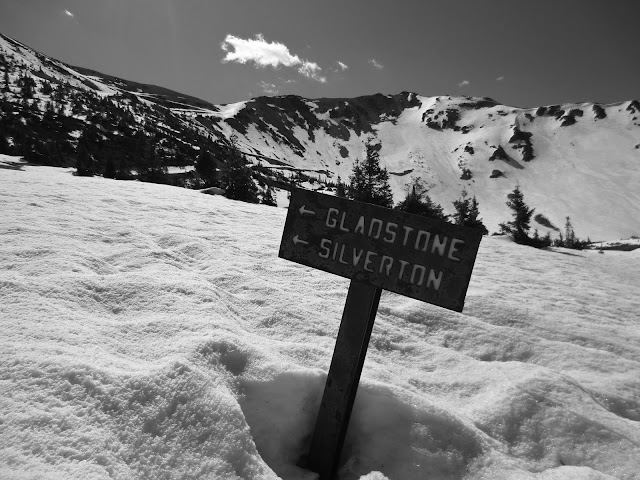 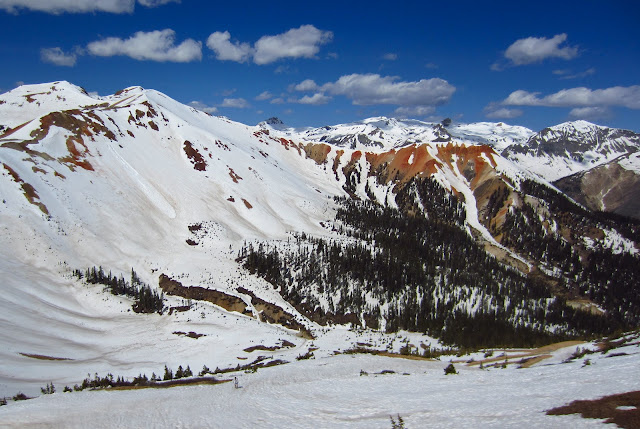 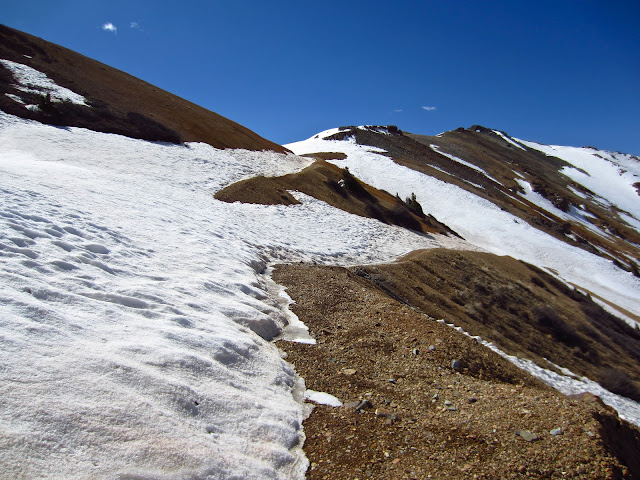 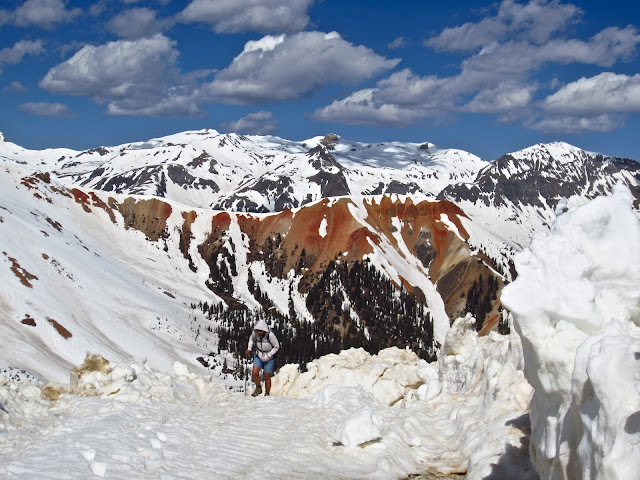 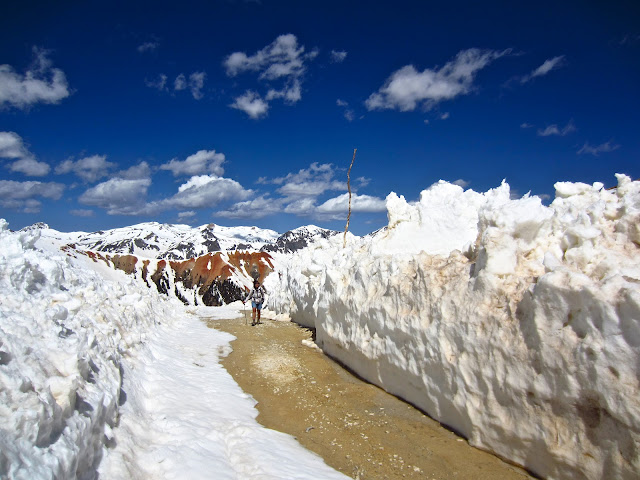 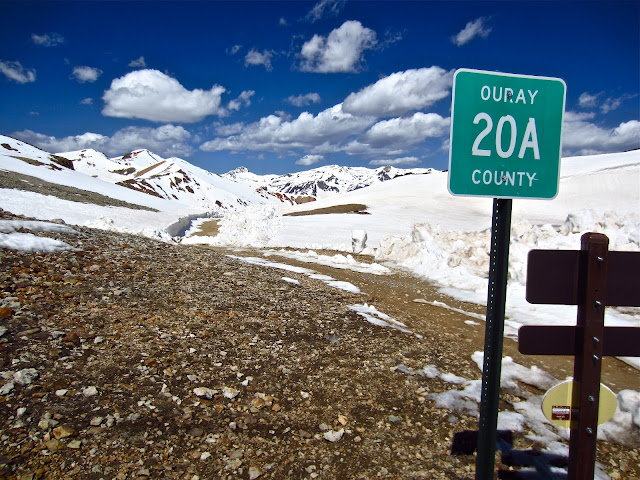 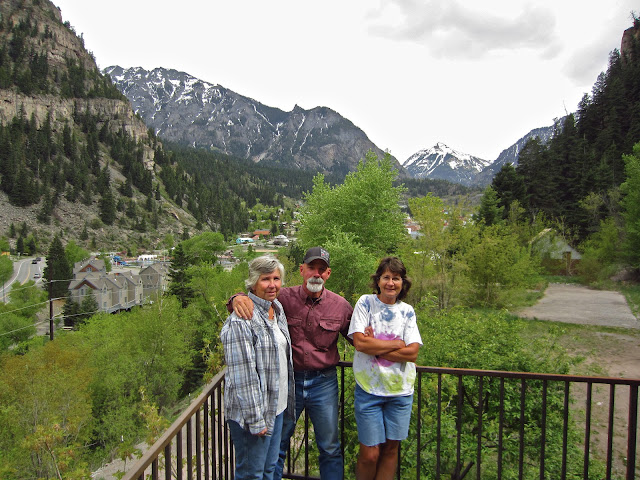 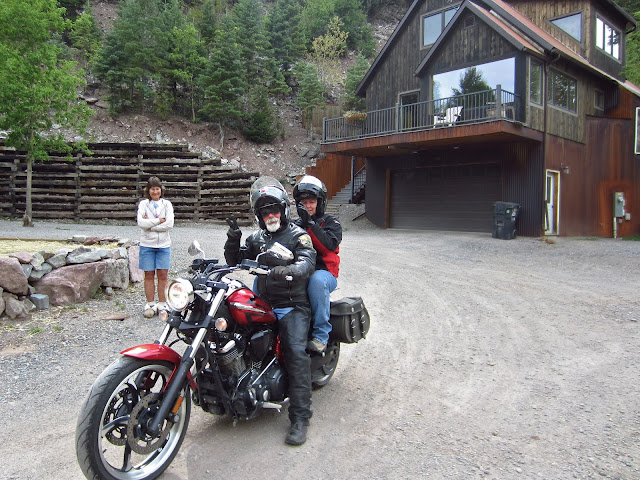 Help spread the Box Canyon Blog "Virus!"
If you enjoy thoughts and/or photos on this post please
"Like" on Facebook or "Tweet" by clicking the "F" or "T" icons below.
Thanks for your support :))
Posted by Box Canyon Blog.com at 11:55 AM