There Must Be 50 Ways To "Overlook" Lovely Ouray 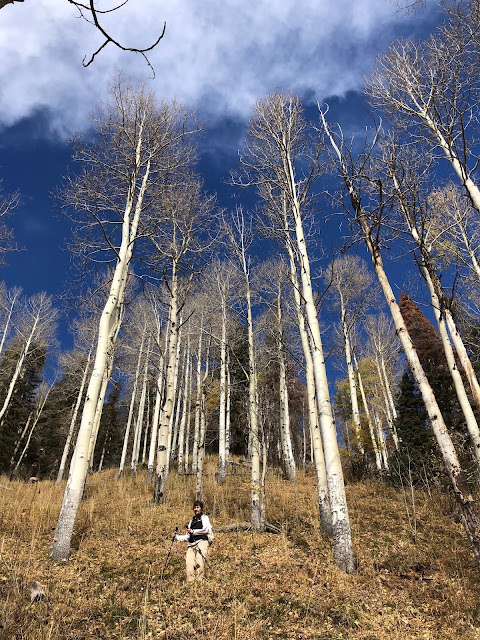 Some of the finest views lie at the end of difficult climbs. And there's certainly no lack of nearby trails and/or peaks from which one can "overlook" Lovely Ouray....

Let me count the ways, beginning with no less than half a dozen or more places on the 6ish mile Perimeter Trail. Then there's at least two or three spots from the switchbacks going up Bear Creek Trail. And who could forget one of the best town and surround views from well over 10,000 feet, atop Twin Peaks.

A scenic 15 minute drive south on the Million Dollar Highway, followed by a 30 minute four-wheel drive, followed by a three mile grunt to the summit of Mount Abram, well, let's just say you are in for an eagle's eye view of Lovely Ouray, cradled in the bosom of its mountain mamas, and stretching well beyond Grand Mesa's grand plateau, some 70 miles distant. I swear, on a clear day you can see Wyoming.

If you're willing and able to grind three miles up Old Horse Thief Trail to the "Ridge-To-The-Bridge of Heaven" you can land a southerly perspective of Ouray, not to mention, Ridgway, Log Hill and Pleasant Valley.

Then there's the Alpine Mine Overlook, a semantic contradiction in that it overlooks Ouray instead of the Mine.

I can't really say that I have a favorite overlook. Perhaps which ever one I'm on, to be honest. Last weekend it happened to be the Alpine Mine Overlook...which really should be renamed, "Ouray Overlook," as I see it. 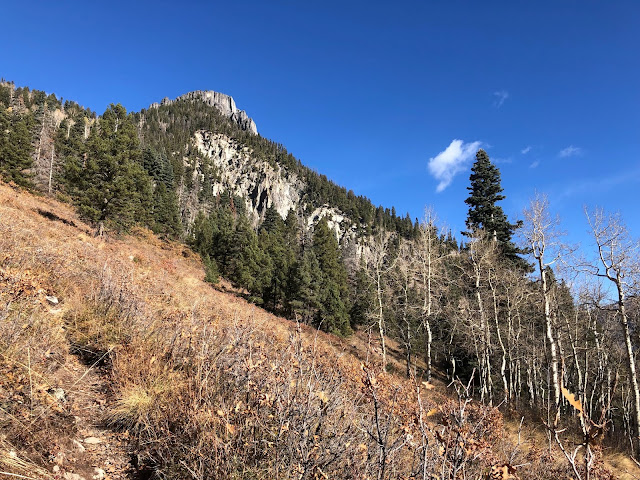 Having lived in Lovely Ouray for over a decade, Bobbie and are cognizant that this darling of an Indian Summer will soon fizzle into snow and blow, jackets and hats and, worst of all, long pants. This serves as motivation to get outside and wander while the wandering is good...as in warm. We also know that, except for a few pockets of gold, Ms Autumn's pretty little leaves will be pretty much brown and on the ground for this hike. But in some ways, leafless aspen make for austere photos when plastered against a dome of blue sky. 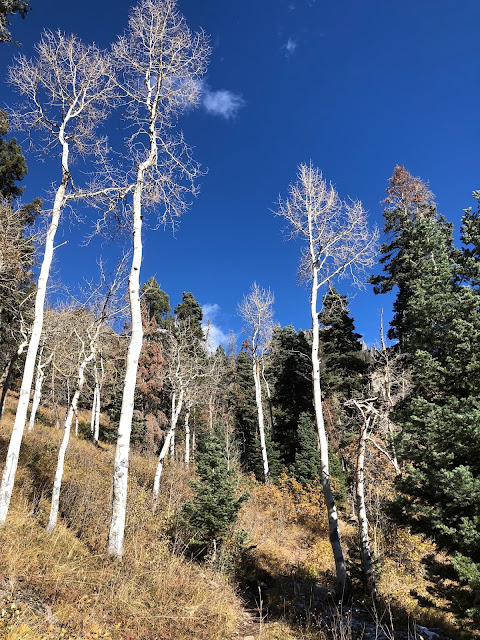 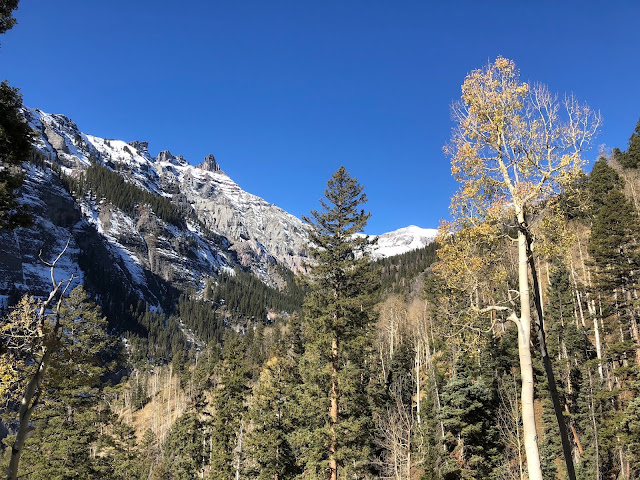 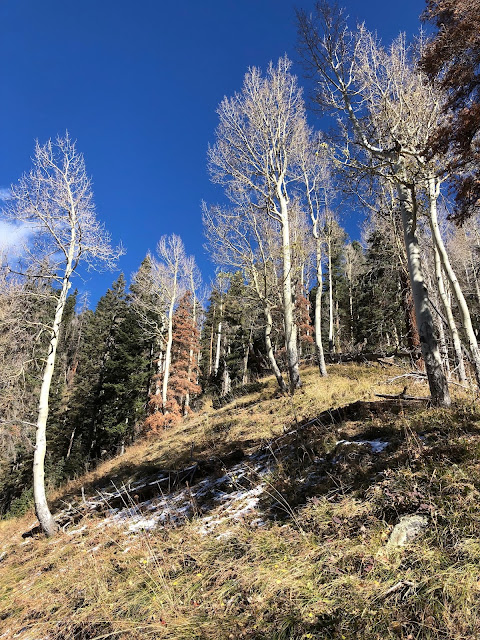 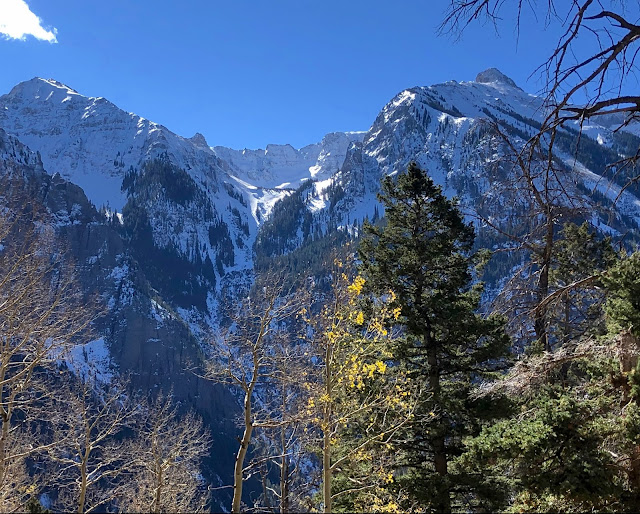 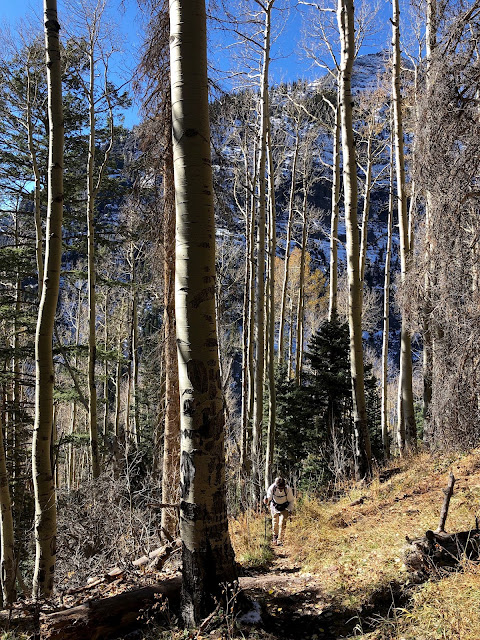 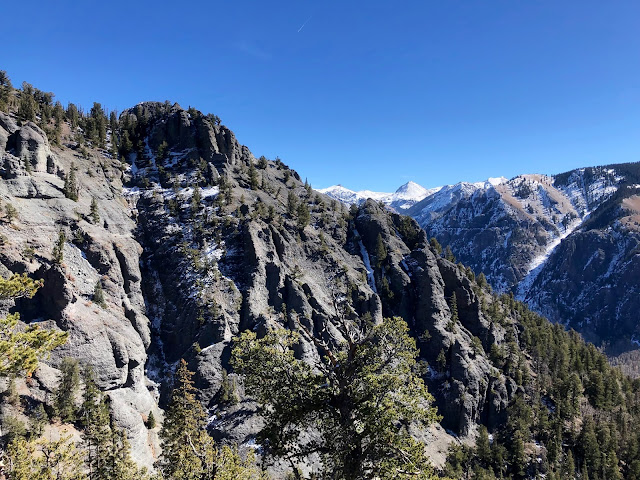 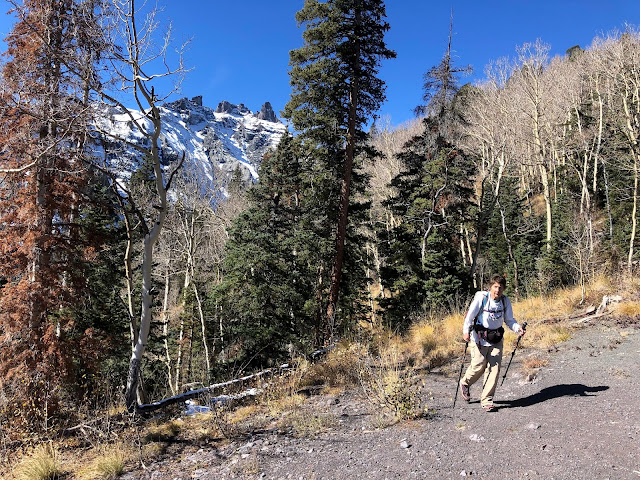 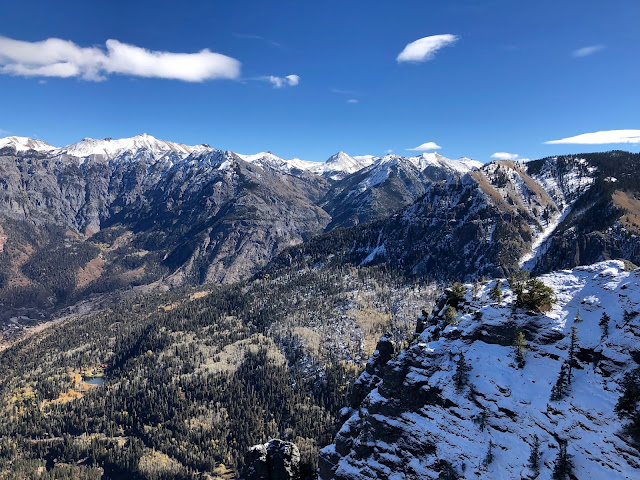 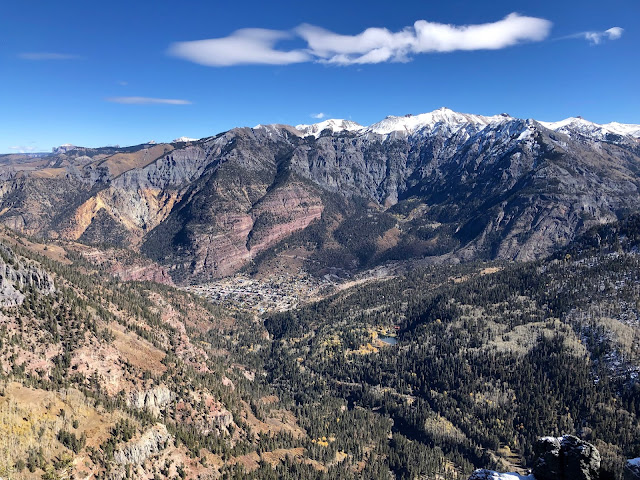 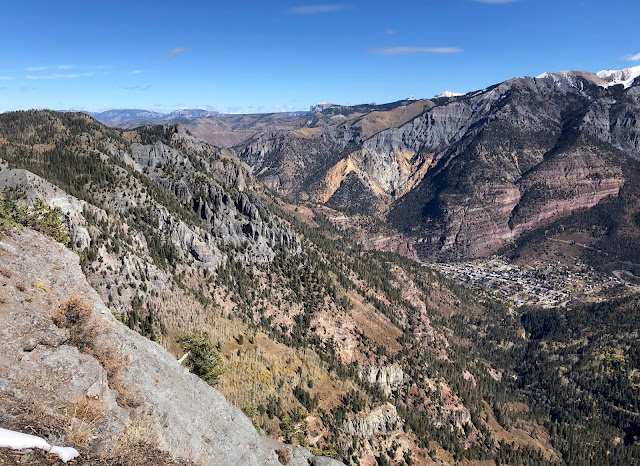 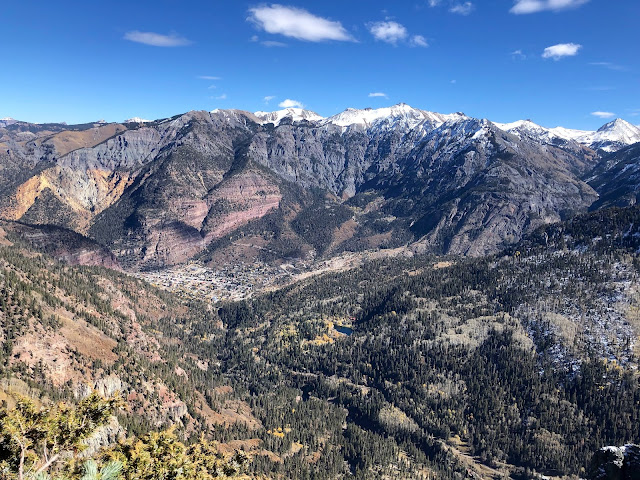 Still, even when Ms Autumn has packed her bags and moved south, and summer's once lush green grass waves golden in the breeze, and we are left to wade trail troughs of decaying leaves, there is no shortage of color in Lovely Ouray.
What a great day!
Only when we are truly lost and alone, be it in the mountains, on the sea, in a desert or in Life itself, do we find ourselves...
Peace out from Mark and Bobbie,
3,000 feet above a pretty little town on the verge of winter.
Posted by Box Canyon Blog.com at 8:29 AM