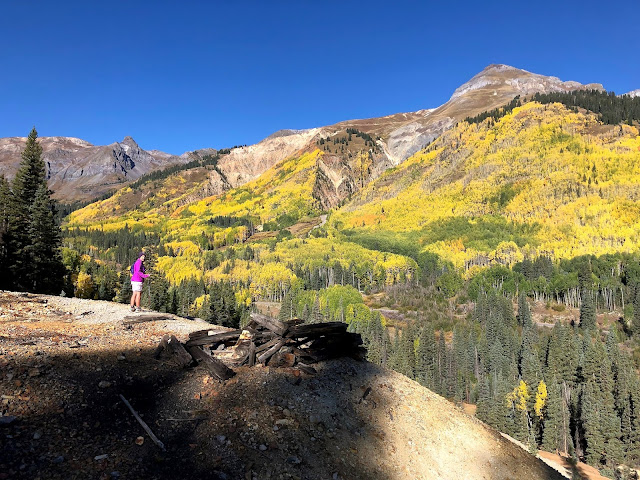 I suppose it's curiosity that drives Bobbie and I to push deeper into mountainous backcountry...that and a compulsion to be alone.

As most of you know or will eventually find out, backcountry solitude is a scarce commodity these days and, with the growing popularity of ATV's, silence even more so. 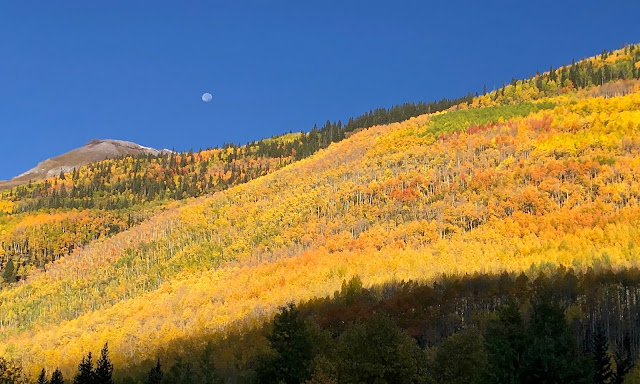 It helps to be an early riser, as well as indifferent to "the elements," if you want to have a trail all to yourself. Our languid, to downright slothful, transition to autumn this year caught me by surprise. I was woefully underdressed for this outing, in my usual shorts and a light weight T-shirt. We exited our car up near Red Mountain Pass well before sunrise, our breath hanging like vaporous clouds in the gelid, high altitude air. To make matters even more frosty, our hike was on the shady side of Mount Sunblock. Of course Bobbie had everything she needed to be warm as toast. Never a Cub or Boy Scout, I'm seldom prepared for winter. 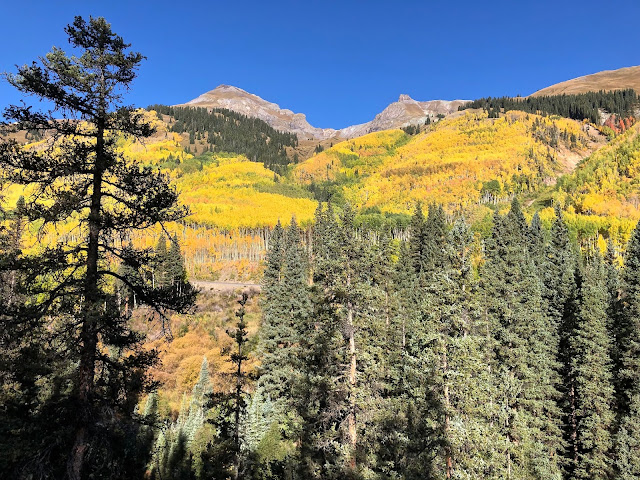 Being somewhat tired and sore from the previous day's outing, we left our plan loose...more set in Jello than cement. With temps in the 30's, shivers had me casting a lustful eye over my shoulder, aching for the warmth of our car.
"Did you forget something?" Bobbie finally asked.
"Yeah, adequate clothing." 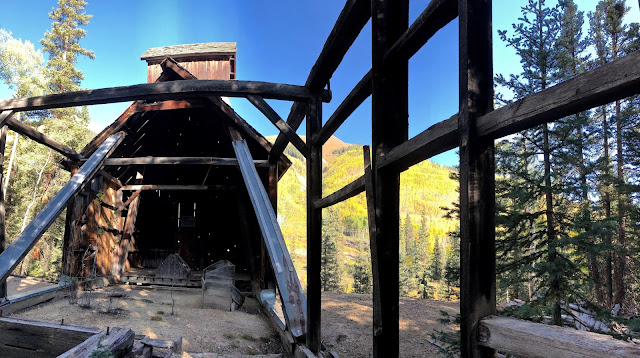 The day's first stop was at the Colorado Boy Mine. This mine is one of only three intact vertical mine shaft structures in the Red Mountain Mining District. It can be viewed cross canyon from the Million Dollar Highway, a San Juan Skyway National Scenic Byway.
The Colorado Boy dates from the 1880s and was never a big producer. Over decades the head-frame began to suffer from the effects of time and heavy winter snow loads. In 2001 a partnership between the Colorado State Historic Fund and the Ouray County Historical Society was formed to fund stabilization the Colorado Boy's failing head frame.
This area is somewhat protected from avalanches, and thus one of our favorite places to snowshoe during winter. I do wish it was on the "sunny side" of the mountain, though. 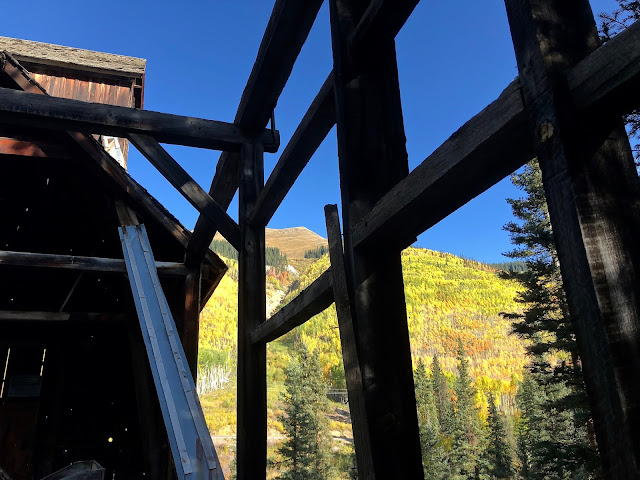 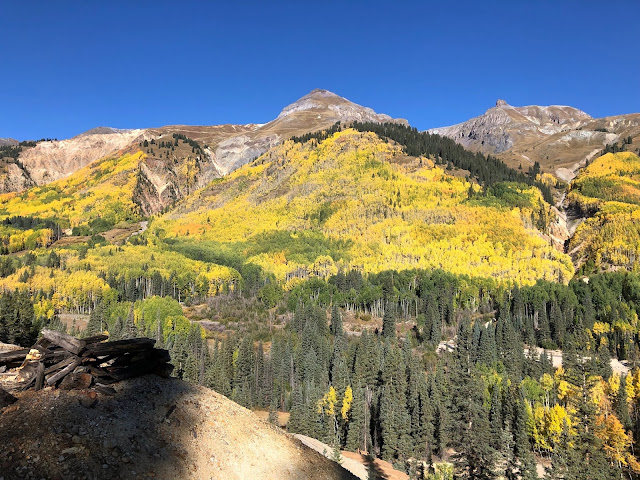 Beyond the Colorado Boy, we set our sights on the American Girl Mine...another couple miles and higher up on the mountain. The views of autumnal aspen had a fevered glow as we gazed from our shaded trail to the sunlit side. It's an area where we have explored virtually every trail, nook and cranny, till we know pretty much know every bump, peak and drainage by name. 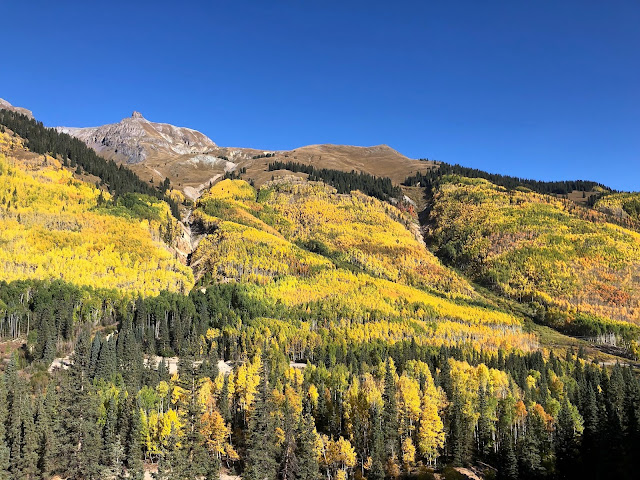 As Bobbie stands on a massive mound of mine tailings to get an open photo of aspens in all their glory, we see evidence of efforts to remediate/reduce the amount of polluted runoff from toxic piles of mining ore. I would have to be dying of thirst before drinking from streams around here. 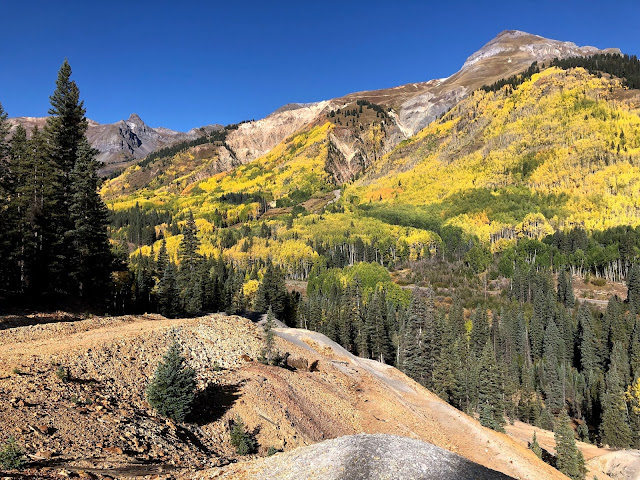 The trail that cuts over to the American Girl Mine is barely visible and easily missed. The forest surrounding the mine is extremely dense, if not protective, with copious amounts of deadfall, tangles and a few open pits where miners once probed for a lucky strike. 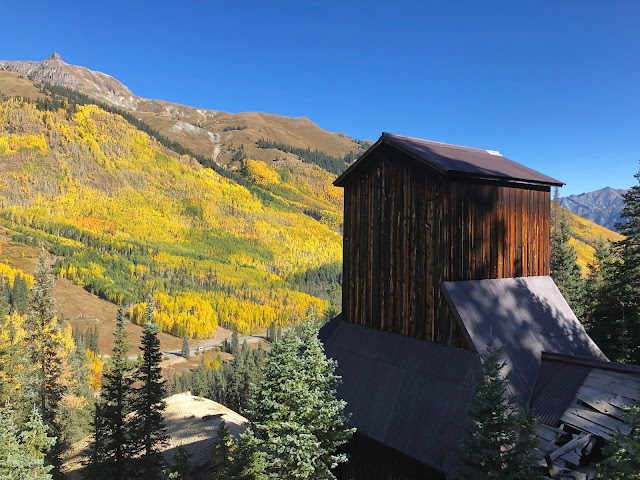 With morning finally breaking over Mount Sun Block, we found a warm patch of sunlight from which to view the American Girl's head-frame and the expanse of golden aspens, glittering in the breeze. 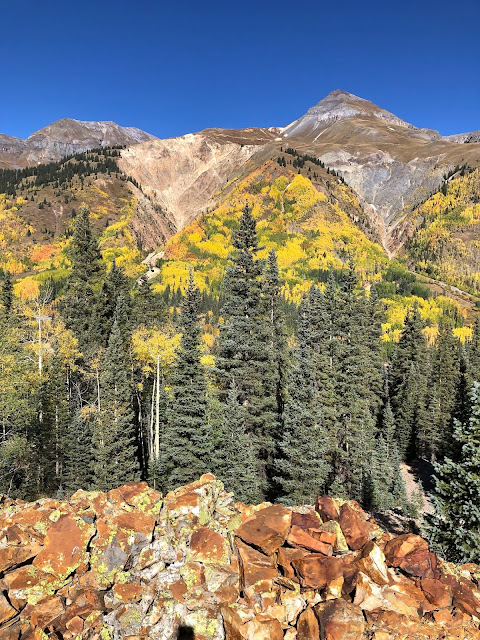 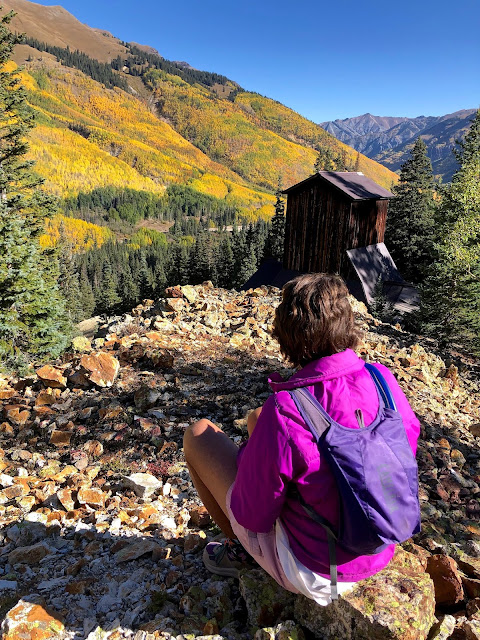 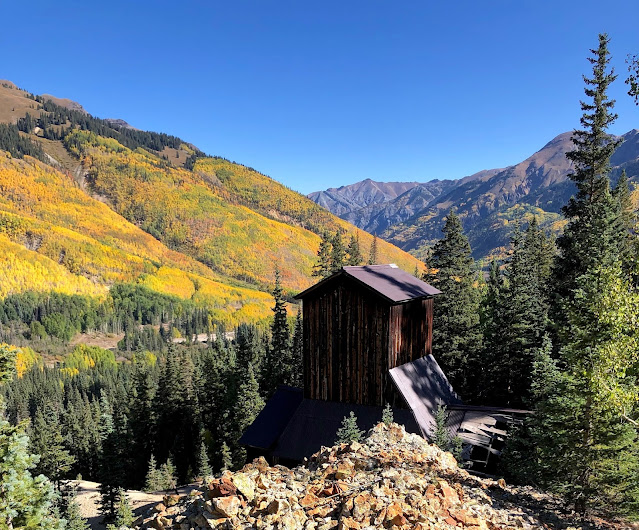 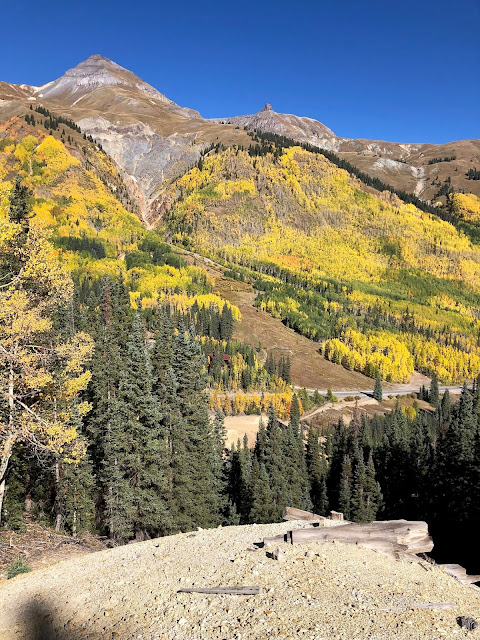 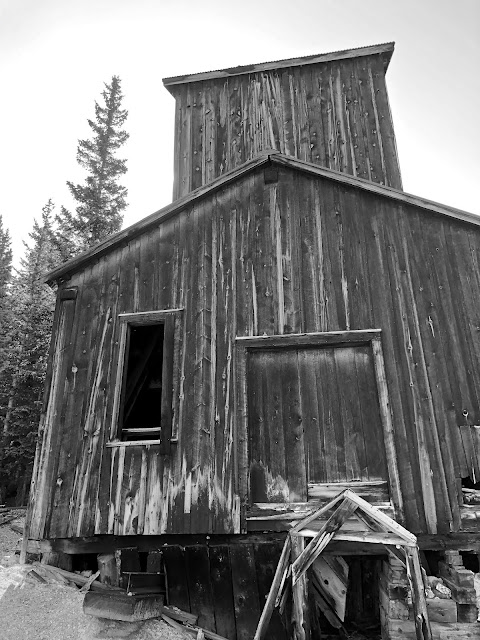 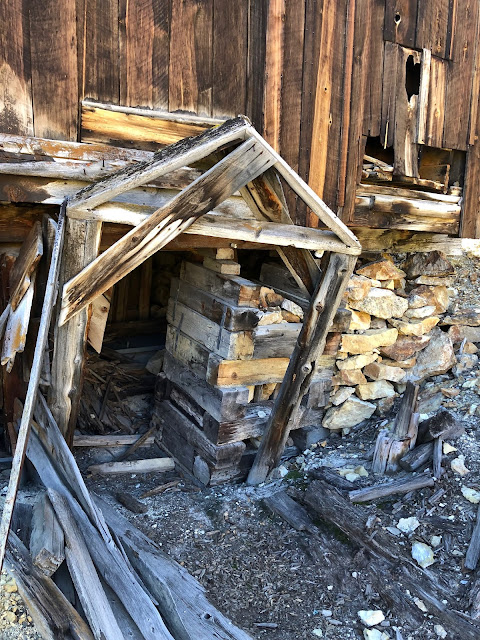 Unlike the Colorado Boy, attempts to shore up the larger and heavier American Girl Mine are piecemeal and crude at best. Gravity never sleeps on steep sloped mountainsides, and that, along with the burden of winter snow-loads, spells doom for old mining structures. Inside American Girl I felt as if it was on the verge of collapse. 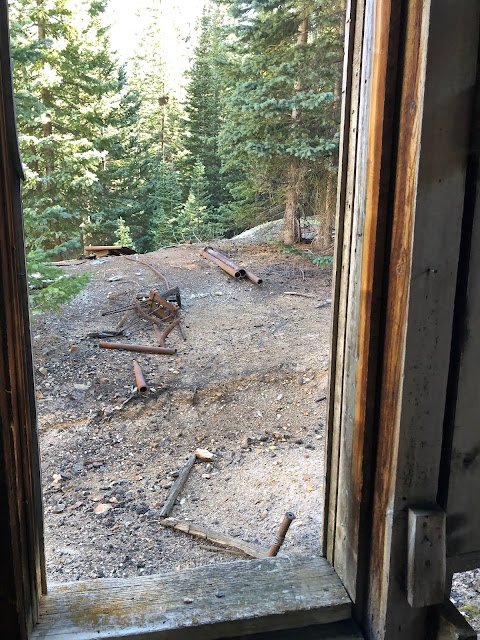 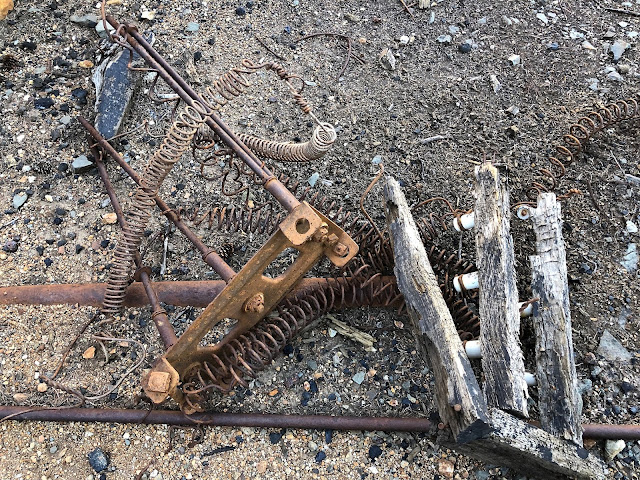 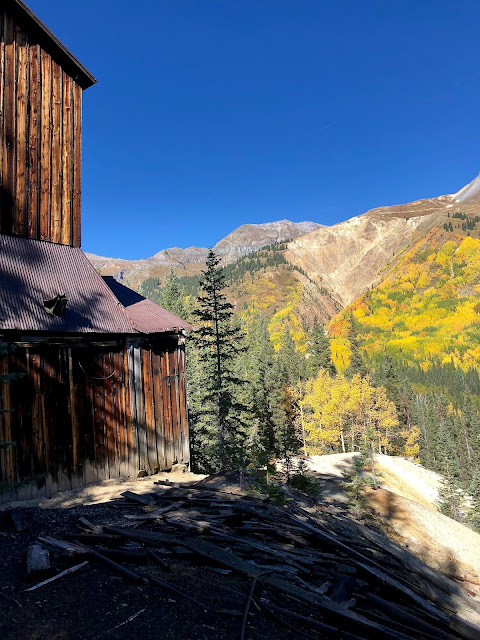 Time to head back down. At least the sun came out for our return trip. 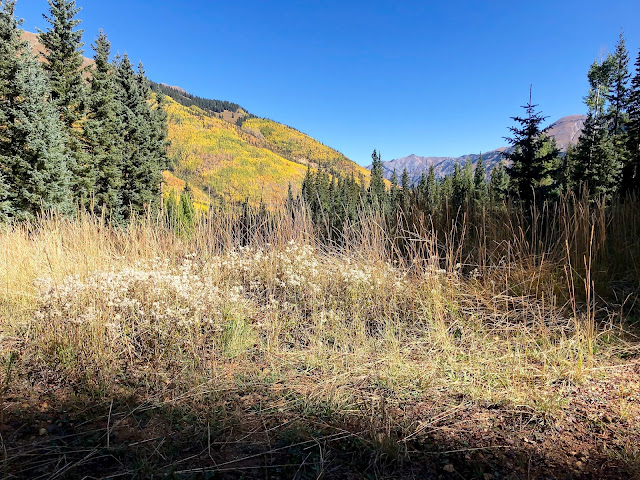 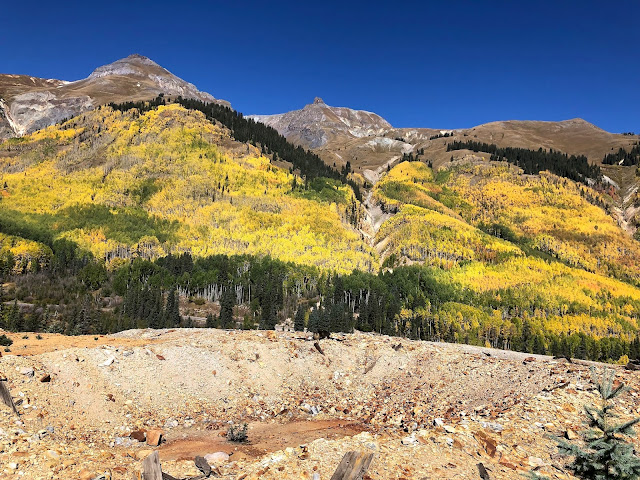 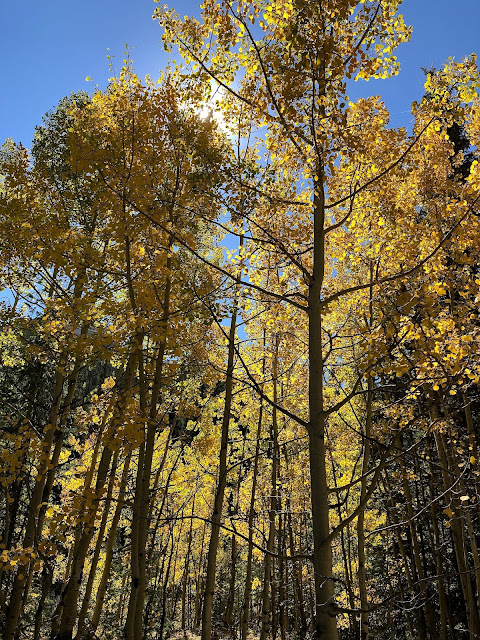 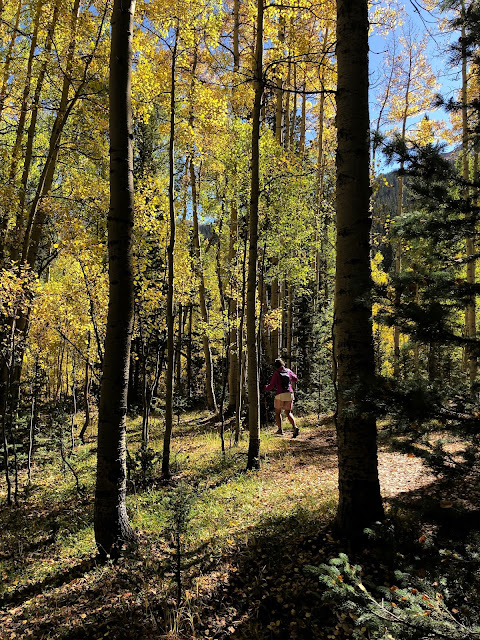 We chose a route down that took us through Ironton, where remnants of a ghost town continue to wage war against time and weather. 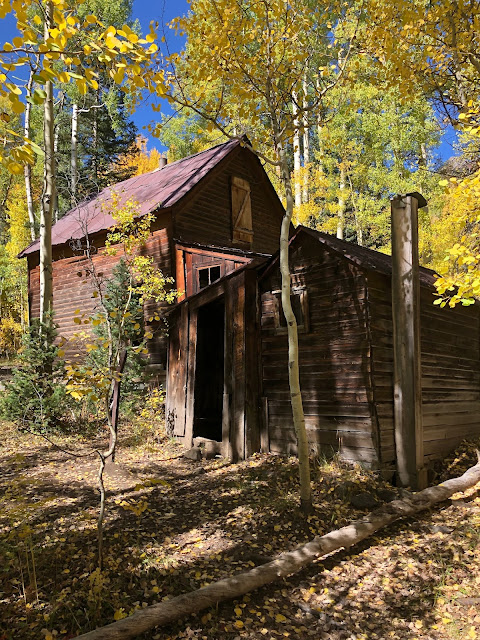 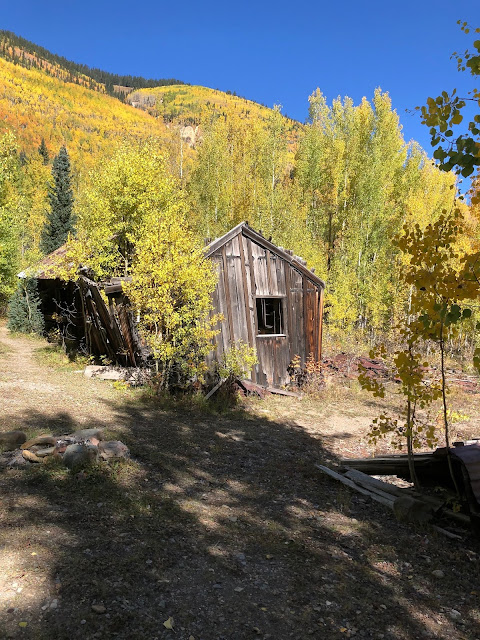 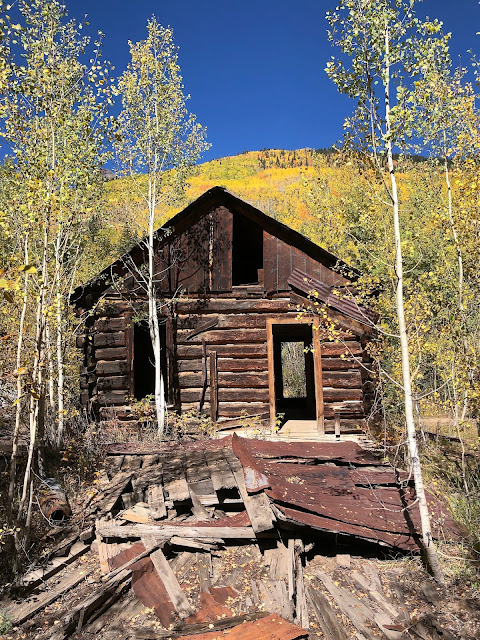 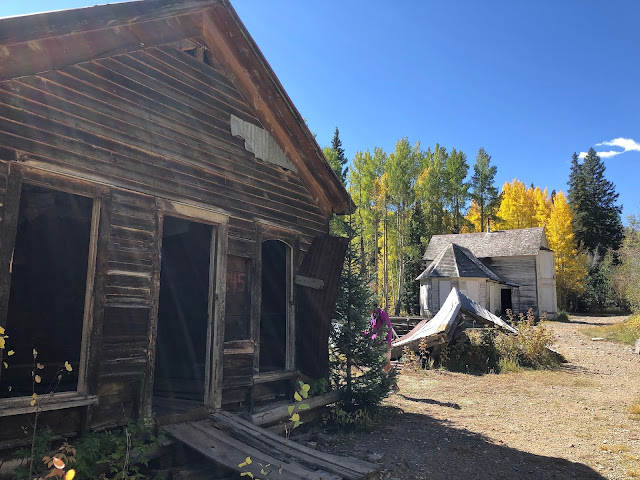 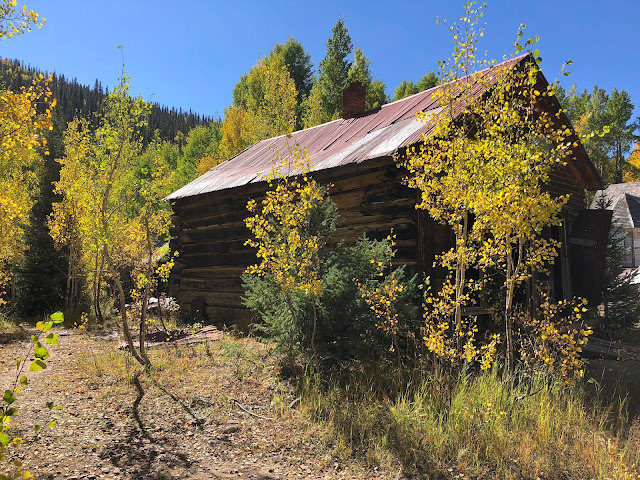 Stay tuned for several more fall posts, some of which include New Dots that will knock your socks off. :)

Posted by Box Canyon Blog.com at 7:14 AM