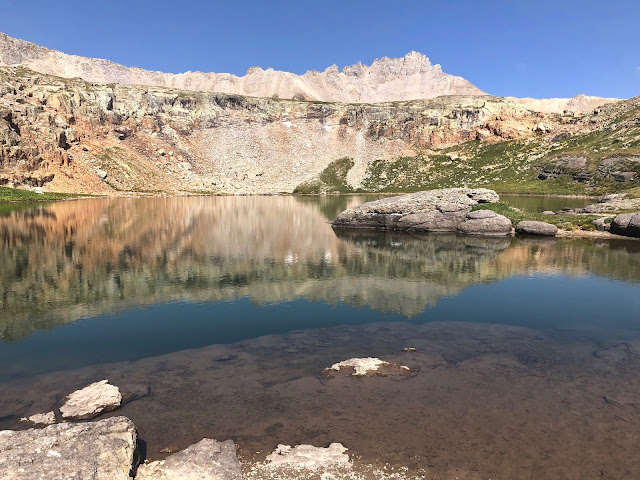 When it seems like you can't change what's going on around you, it might be time to consider changing what's going on inside.
I've noticed that the older I get, the more rigid my attitudes and perspectives become, things that, when left to simmer on the back burner, congeals into a stew of anger and, dare I admit it, hatred. Let's face it, our Nation has not been this divided since the Civil War, and, as Lincoln once famously prophesied, A house divided can not stand.
If it is true that wisdom comes with age, I'm getting pretty damn wise. But, based on personal experience and keener powers if observation, I'm beginning to think that it's religio-political rigidity more than wisdom, that comes with age.
That I wake up every morning to find myself fully and firmly ensconced in septuagenaria, a body worn and torn from from decades of too much fun and abuse, is both a blessing and a curse. Thus I have more recuperation time these days, time to ponder philosophical questions and realities for which there seems to be neither answers nor explanations. Why, how and for what salient reasons, does citizens of the richest, most fortunate Nation on earth choose to polarize when it comes to religio-polictical camps, two things that, in principal, should unite us? The separation is undermining the very foundation of what this country is founded upon?  I can hear my mama now, as I peppered her with all the "Whys?" of childhood. I don't know why. It's just the way it is.
One of the things I'm now old/wise enough to understand, is that anger and hatred create more problems than they solve. You see, anger is a byproduct of hatred, a "side effect," if you will. Regrettably, there are are but two outlets for anger. One is to express it, the second is to repress it. The real truth regarding anger is that it usually ends up hurting ha-ter more than the ha-tee. It takes a lot of energy to hate, something I  don't have to spare these days.
It's a conundrum. No matter the choice, anger is either going to hurt you, hurt someone else, or both. Notice how more and more "people" are choosing to shoot others just for the fun and release?  Pandemics, religion and politics sure make strange bedfellows. Thus, here we are...at the tipping point of insurrection and overthrow over election results, vaccines, masks, and "Jesus saves." It's ridiculous, like a full blown marital spat over whose turn it was to take out the garbage, and it just sucks me dry. There is too much at stake. When democracy based Nations fail to reconcile so-called seemingly irreconcilable politically differences, it's often a civil war that fills the vacuum.
It's more a treatment than cure, but I think readers will find that regular doses of wilderness are beneficial when slogging through difficult times. This "prescription" actually comes with good side-effects, too, like sleeping more than 8 hours a night, being kind to others, empathy, and donning hats and t-shirts with "Life is Good" logos.  :) 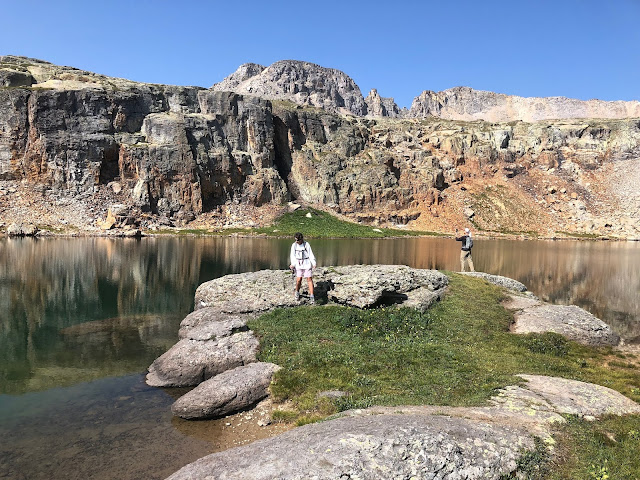 A 20 minute pavement drive up to Red Mountain Pass, plus a 20 minute drive up a rocky 4WD road, followed by a 20 minute breathless hike, landed me and The Two Old Broads far above timberline on the banks of a picturesque mountain lake full of lively trout. Indulge me, if you will, while I demonstrate the power of deep breathing and imaging.I want you to gaze into the photo below and slowly draw two deep breaths, exhaling slowly. Now draw a third deep breath and hold it. Gaze into the photo. Picture yourself there, alone but for a trusty fly rod, casting your cares into the water while slowly exhaling.  Feel the release?
Of course, some may not need a fly rod to reboot their soul to a peaceful state. Maybe a long exploratory hike is more to your liking... 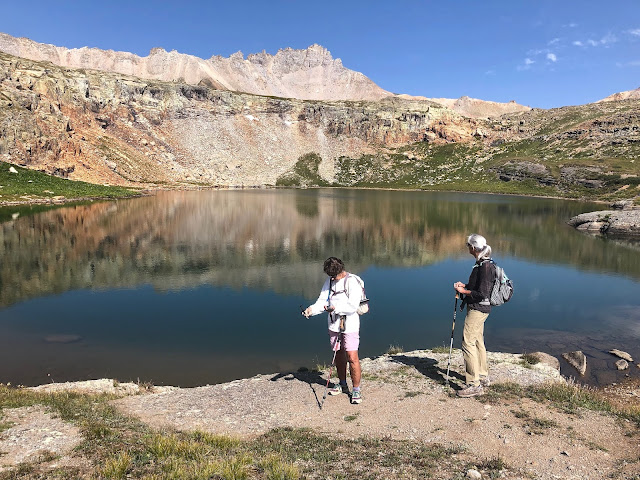 ...like this one, where The Two Old Broads pushed on above the lake for better views. Over the saddle to the left of Peak T-10 is Black Bear Pass Road, switchbacking its way down to Telluride. From this vantage point we can look down on the 4WD road that landed us at timberline. Note "The Reds" in the background... 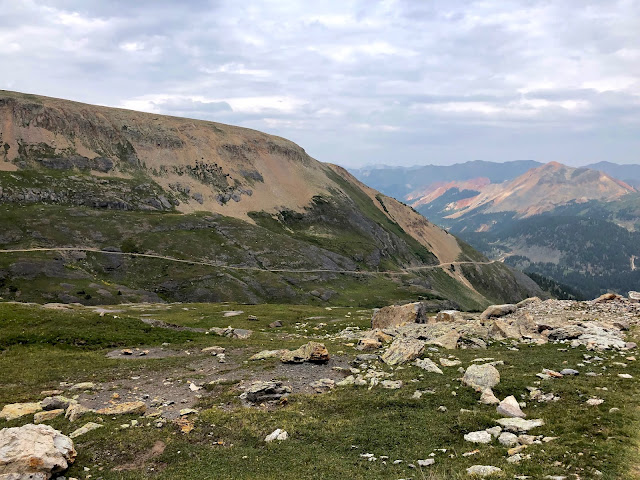 But The Two Old Broads need more miles, and head off to another lake, this one bigger...and blue as the Colorado sky. 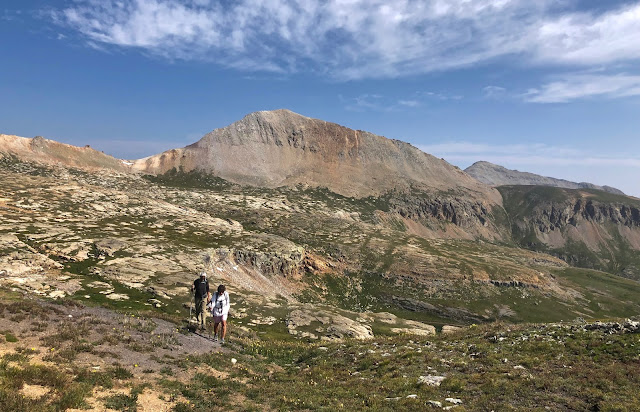 Directly over Ruthless's silver mane is the ridge-line pass above the lake, where Restless pointed out peak T-10.  It's less than a mile as the crow flies. But we are not winged creatures, rather, flightless human beings bound to legs and feet and doomed to plod a crooked up and down path in order to pose for the above photo. We are less than half way to the next lake, believe it or not. These Old Broads can gobble miles like teenagers gobble Captain Crunch. 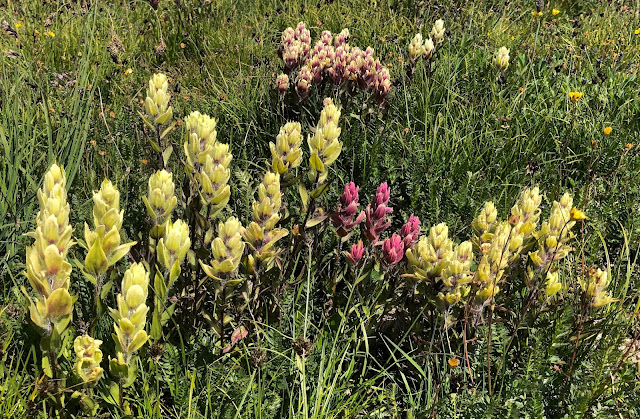 I'm surprised that there are still so many beautiful flowers, even though we were well into August. 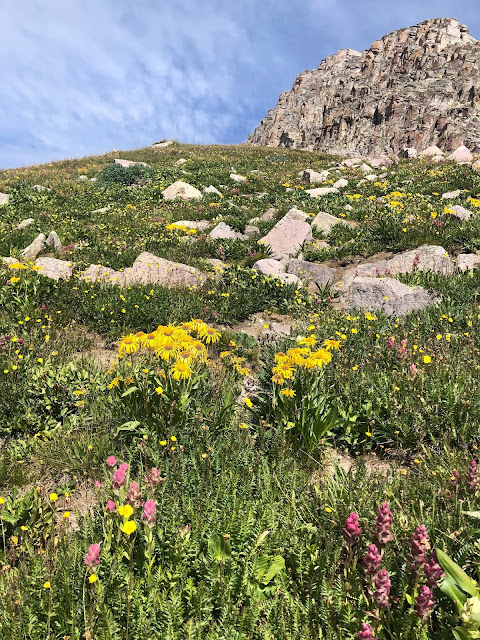 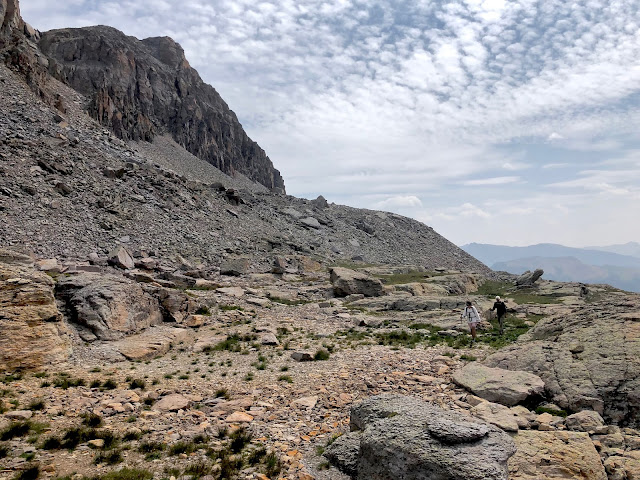 The path is often rugged and rocky between green lawns of tundra. We rummaged around, looking for the miners trash dump. We found rusty tin cans, remnants of a couple shovels, parts of an old stove, and pieces of green, blue and purple bottle glass. 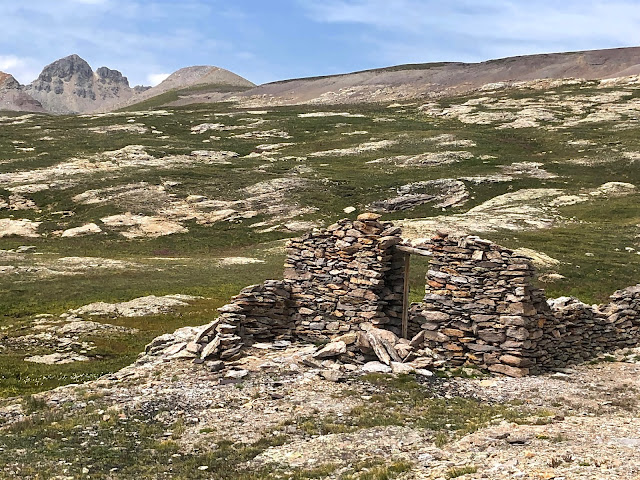 We take time to hang at an old miner's cabin made out of stacked stones. Above timberline and without trees, the miners made use of what they had. We rummaged around some, looking for the miners trash dump. Down the hill we found rusty tin cans, remnants of a couple shovels, parts of an old stove, and pieces of green, blue and purple bottle glass. 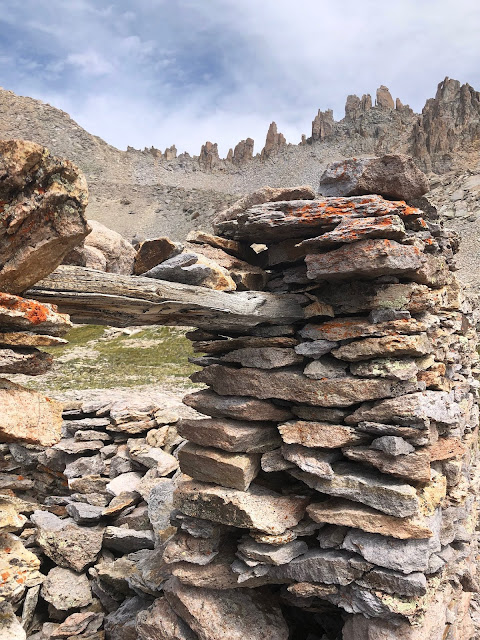 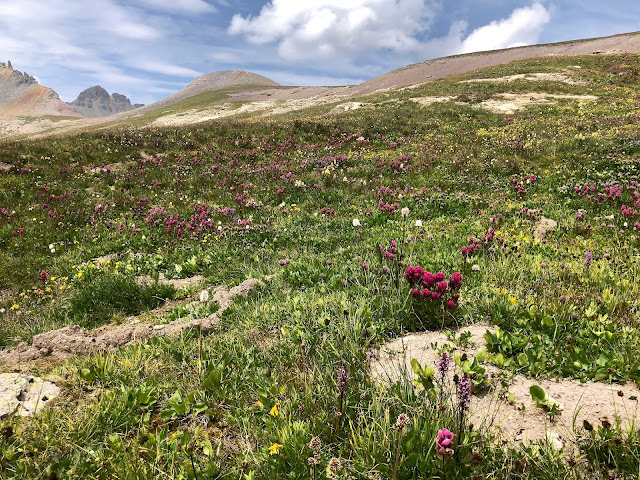 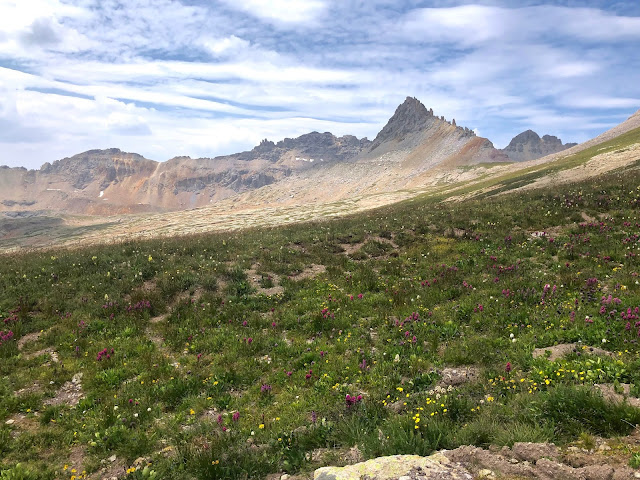 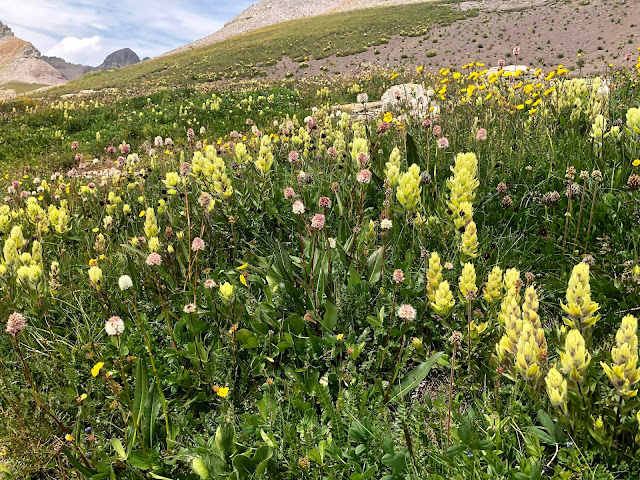 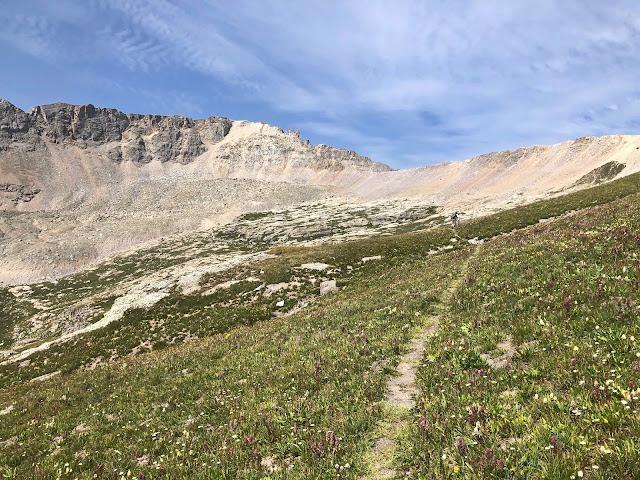 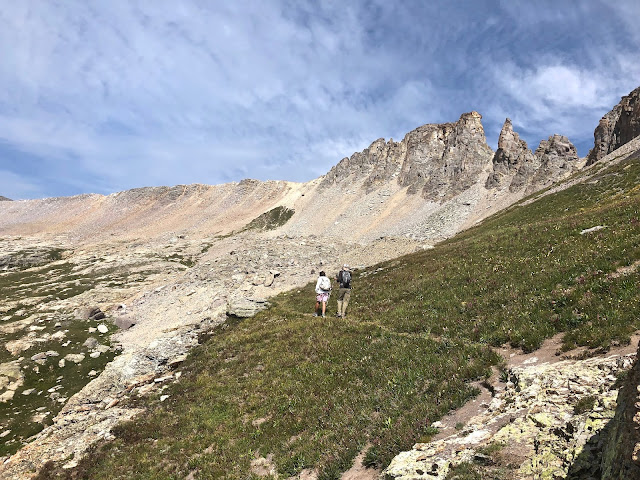 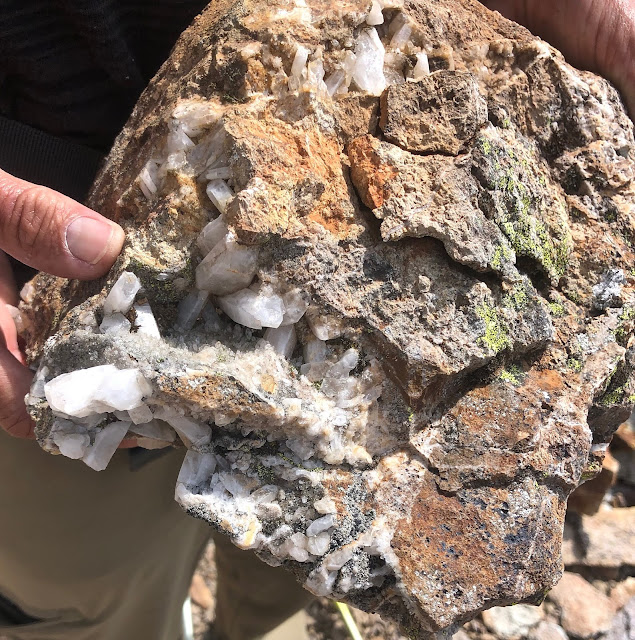 A couple rocks with quartz crystals... 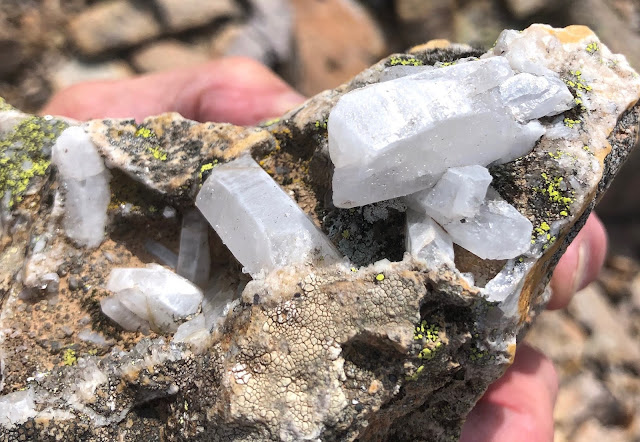 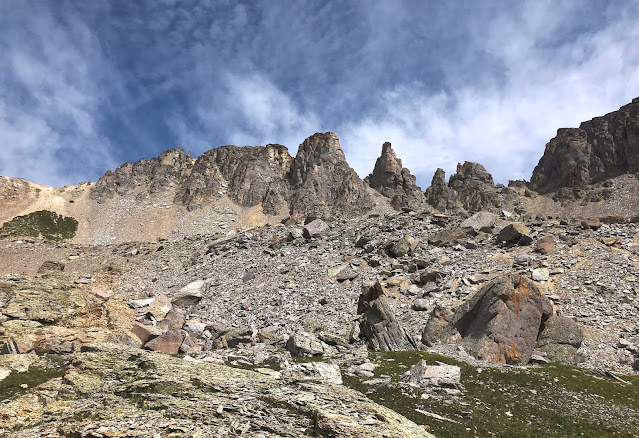 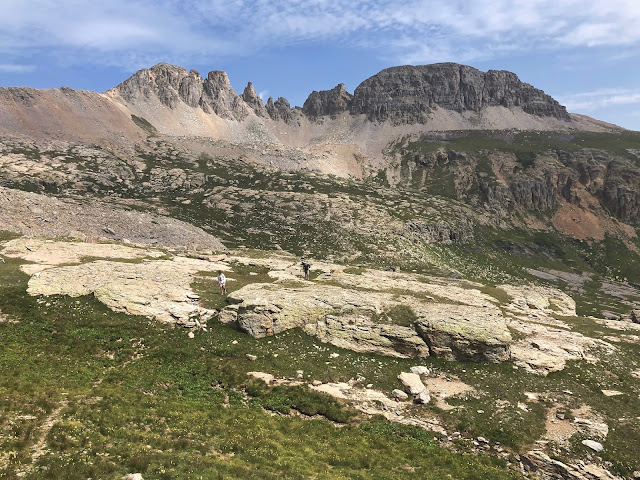 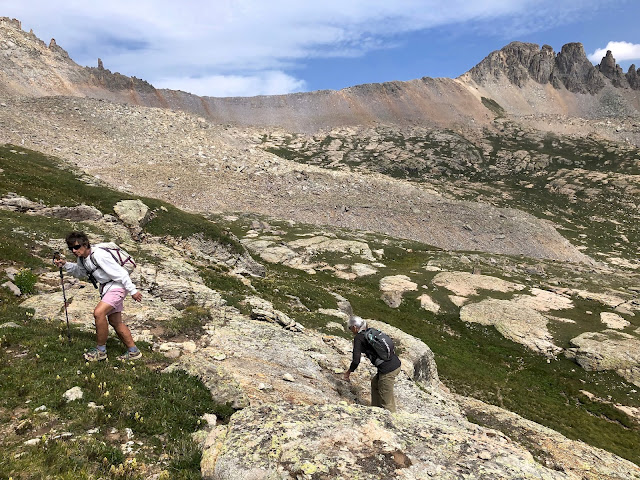 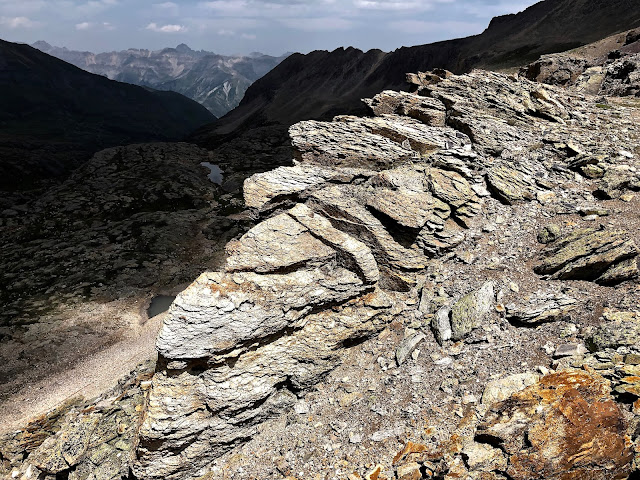 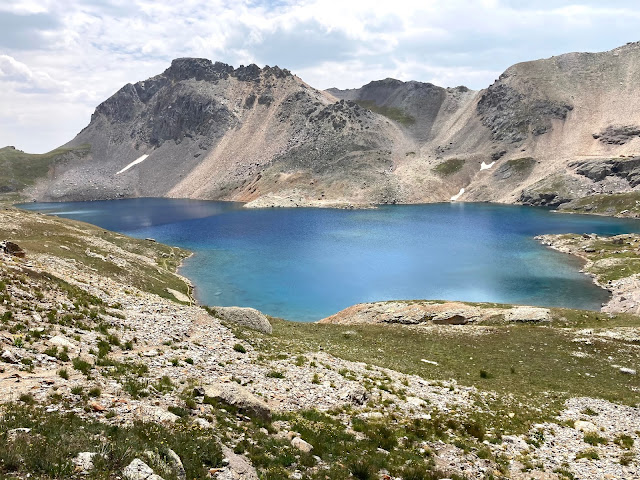 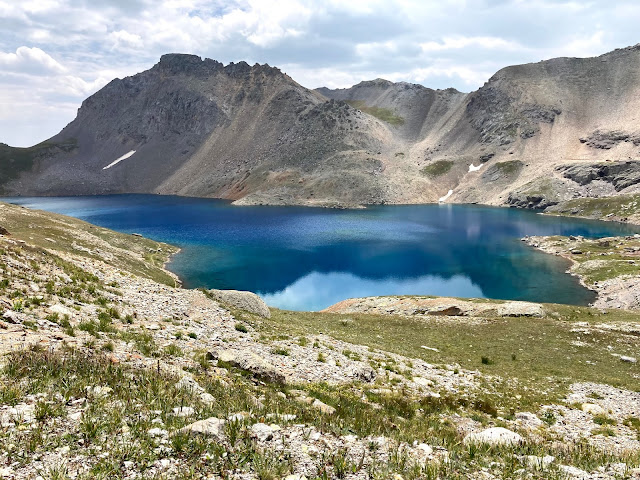 But as clouds move in, the basin lake takes on a more sinister look. 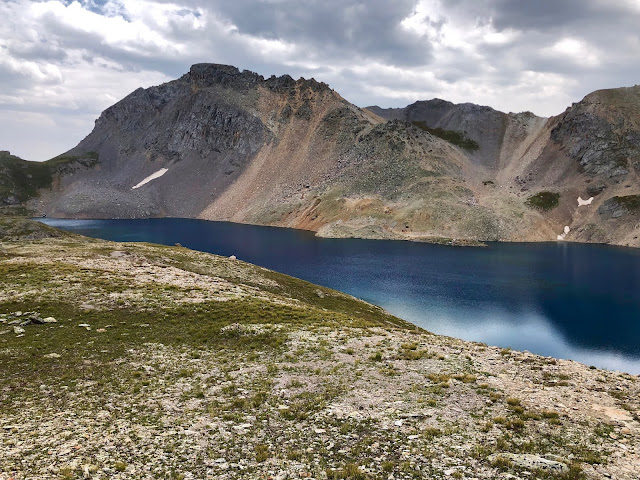 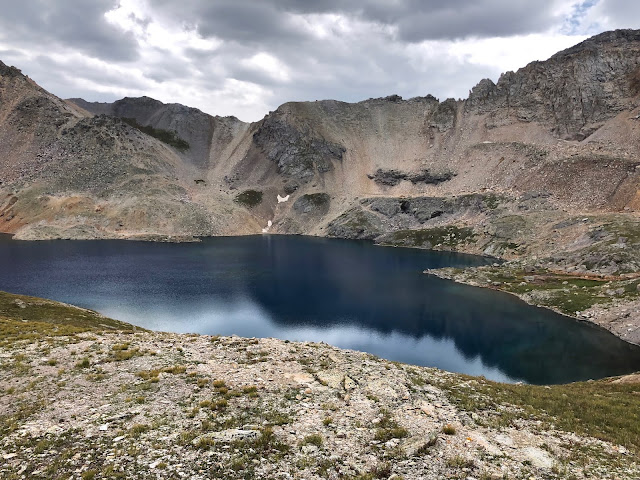 Below is a Panorama. Scroll right to view it in its entirety...

Peace out from another above timberline hike in Colorado's high country, where unparalleled views go on forever.

Mark and The Two Old Broads