Critical Thoughts On Critical Thinking, then, Sorely Tempted On The Sunny South Face Of Sneffels 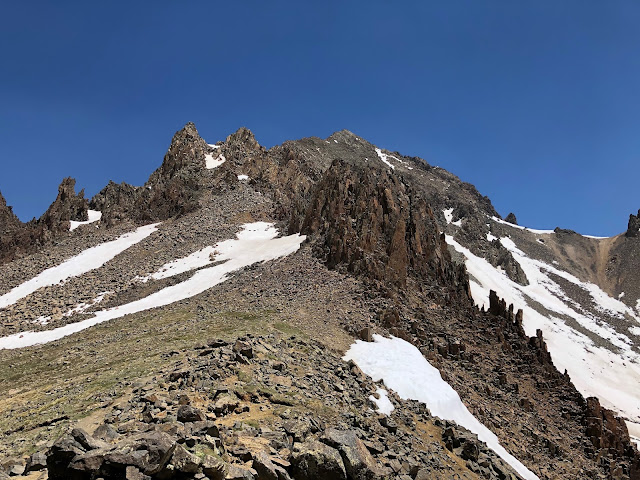 "Temptation is the feeling we get when encountered by an opportunity to do what we innately know we shouldn't."  Steve Maraboli
It was going to be hot in Ouray, pushing 90 degrees said the Weather Guessers. So biking's out. Perimeter Trail's out. Hell, even walking is out. We could go wedge ourselves into the Hot Springs Pool...with a million other tourists who may or may not be vaccinated. Not that the blossoming of new variants would put us at risk, or so it appears according to the latest data. I just think it's rude and ignorant, to be perfectly honest, that virus tracking scientific studies are demonstrating what we thought inconceivable a few months ago when hospitals neared capacity and health care workers risked their lives on a daily basis to save our parents, grandparents, brothers, sisters...neighbors. One doesn't have to be a rocket or any other kind of scientist to see (with the application of a little bit of critical thinking) and believe for ones self that COVID vaccines are working. It's headline news, put in front of us every day in the New York Times, on PBS, on newscasts (except maybe Fox) that this miracle assortment of vaccines is enormously responsible for restoring America to a pre-pandemic "normality."  I mean, look at the fucking graph people. Do the anti-vacs think that it's some kind of fluke that COVID death rates have dropped precipitously since vaccines were introduced?  Do they think the earth is flat, too? Do they not realize how previous vaccines diminished and/or prevented the scourge of countless illnesses such as:
Skeptics will be quick to point out that some or even most of the above vaccines are not 100 percent effective. That is true, but I'm kind of a "numbers" guy. If scientific studies demonstrate that I can reduce my chances of being the recipient of a serious contagion by getting a shot, I think I'll get the shot.
I'm just saying, think critically and listen to what experts in the field of epidemiology (or any hard science) have to say. Try to avoid letting "passionate politics" overrule reason and rational thought. Distrust any conspiracy theory that undermines rationale. Most are meant to disrupt, detract from and dissuade critical thinking. And most of all, do not seek "truth" from Social Media yahoos.
The way I see it, we have vaccines to thank for pulling America (mostly) out of a worldwide pandemic. If only another 15 to 25 percent of the unvaccinated population got the vaccine shot, we are told that it could all but eradicate the current and variant strains in this country. They are not suggesting that COVID would be gone forever. It's natural mutant, and it will survive and become more difficult to defeat as long as it has unvaccinated humans for hosts.
I'm thankful that we (the vaccinated) are now able to go to restaurants, indoor gatherings, sports arenas, theaters and family gatherings without fear. And, if none of the above nudges holdouts closer to getting vaccinated against COVID, then consider this:
As reported on network news a couple days ago:  CDC data revealed that 99 percent of Americans who died from COVID last month (June, 2021) were unvaccinated.
The vaccine works!
Food for thought.
Moving on to "higher ground" now... 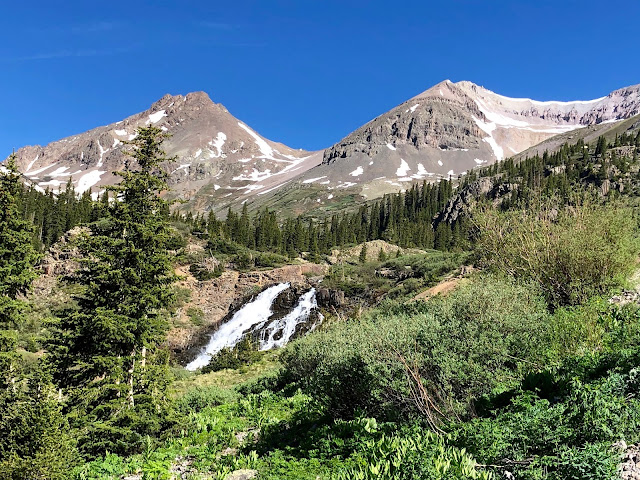 Last week Bobbie and I thought it was about time to check on snow levels above timberline so we could start planning a few summer hikes. Yankee Boy Basin is convenient enough, being only 9 miles from Lovely Ouray. 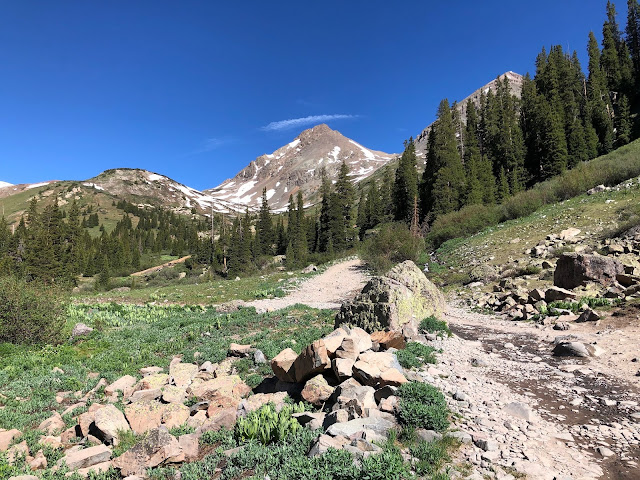 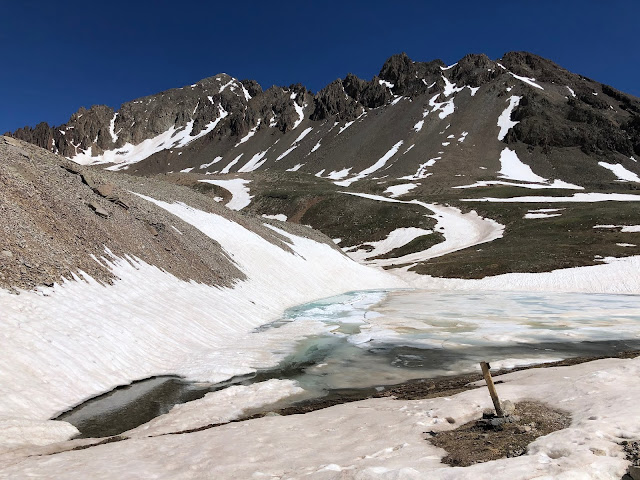 The higher we climbed the more snow to trudge. Lakes starting to thaw, so no shortcuts. 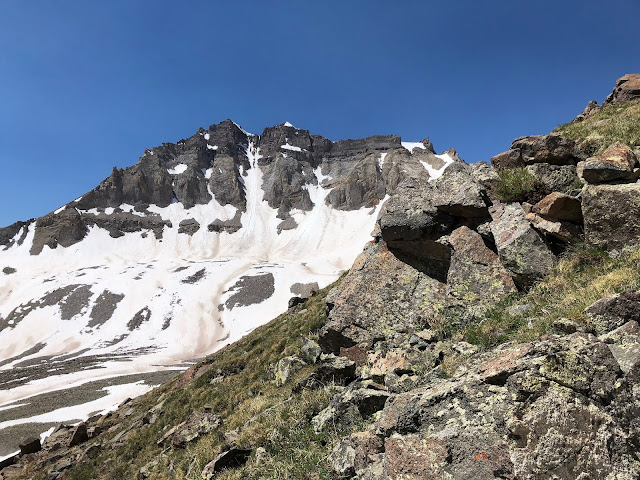 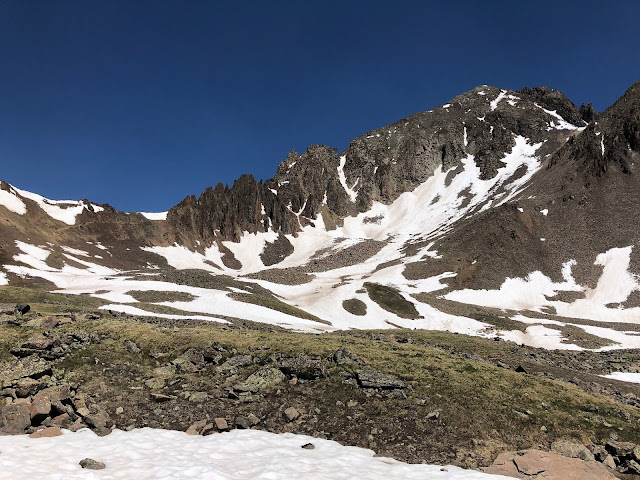 To the right in the above photo is Mount Sneffels, to the left our intended route to Blue Lakes Pass. The trail was clear of snow...till it disappeared into a steep snowbank just below the pass. 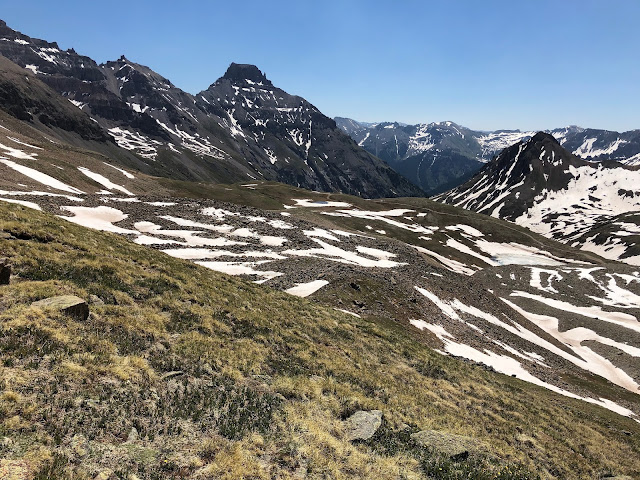 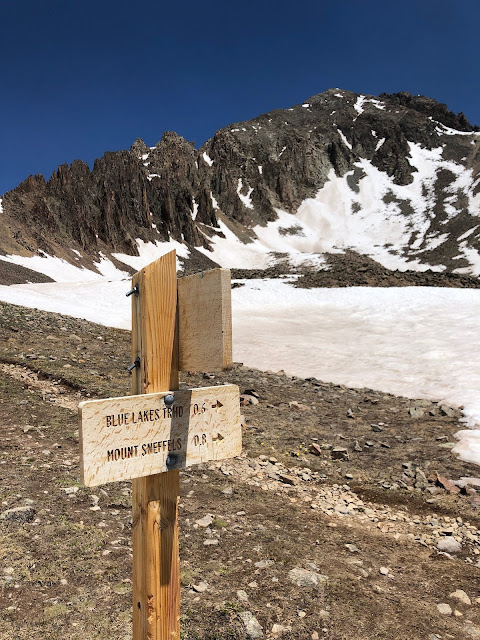 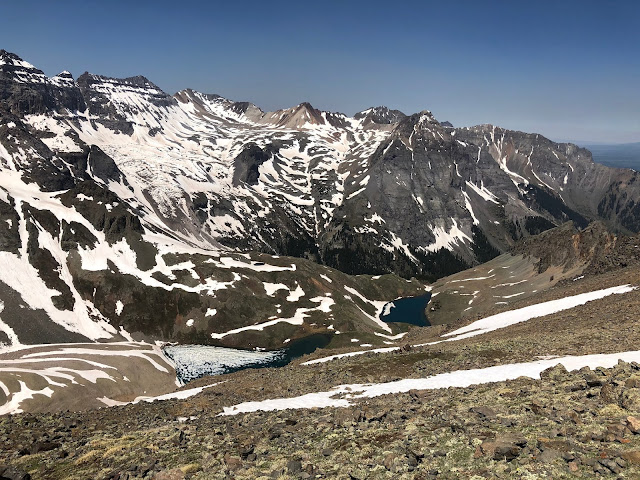 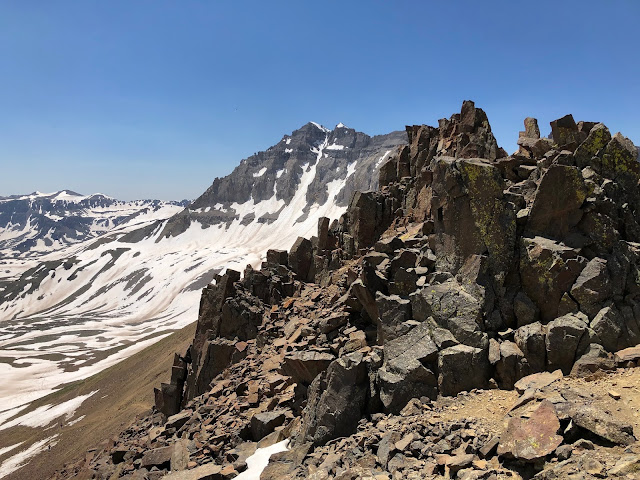 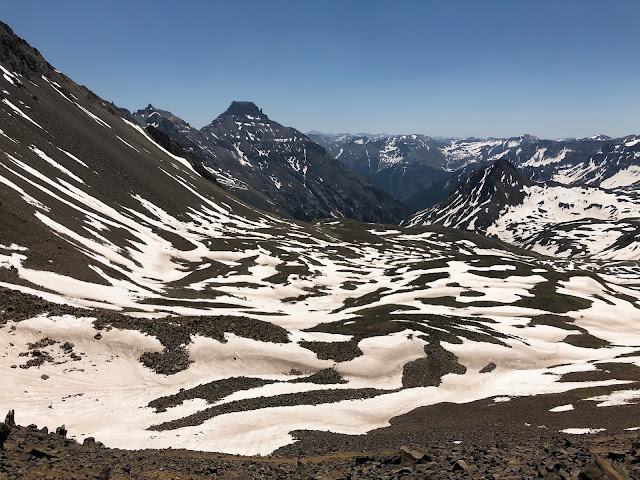 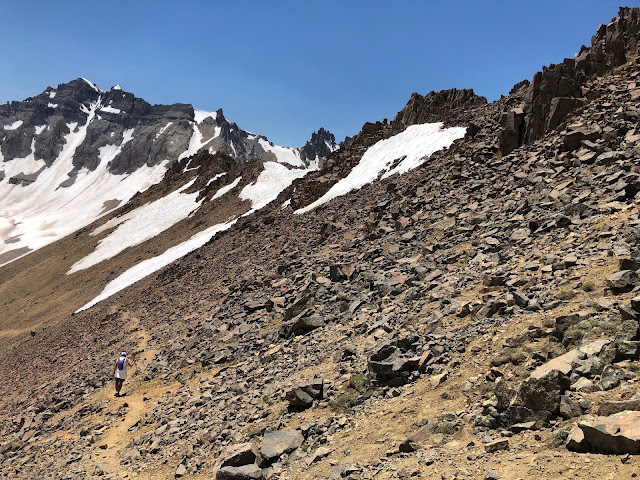 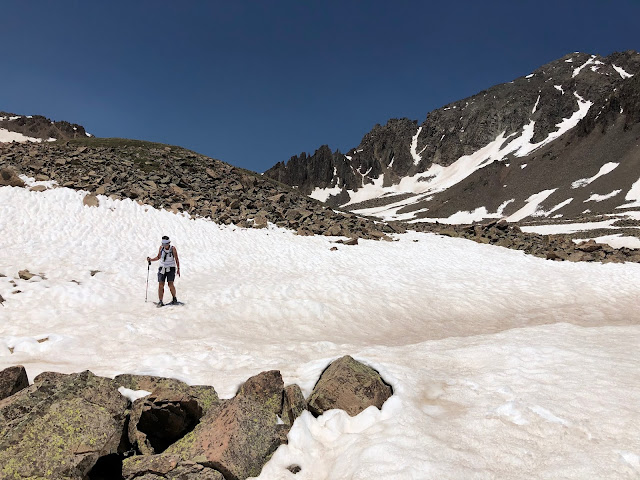 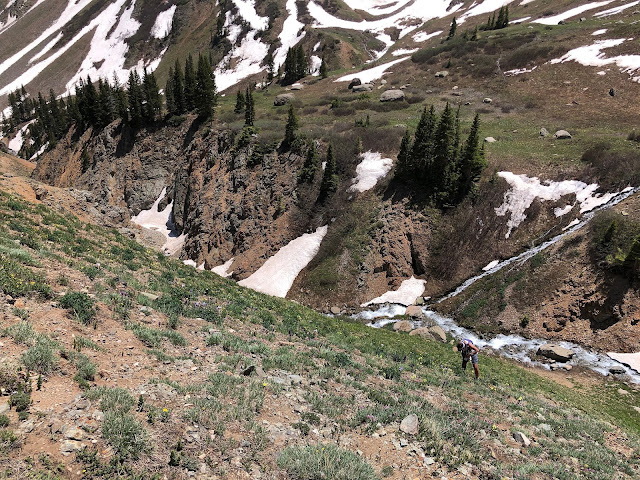 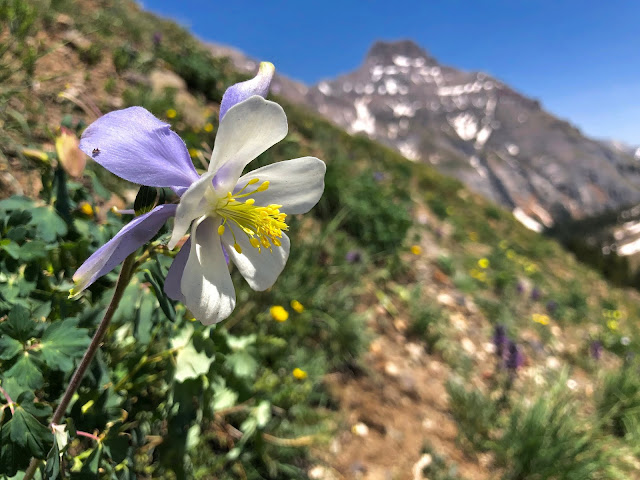 Below is a video I took of a ptarmigan while on this hike. During winter the ptarmigan's defense against predators is their snow white plumage. When the snow is gone the ptarmigan's plumage changes to shades of gray that match the rocks and boulders. This one is in transition...a little white still left on the bottom with gray above. COOL!
Peace out,
mark and bobbie
Posted by Box Canyon Blog.com at 12:46 PM