Our Mining Heritage: A Glimpse Back At The Boom/Bust Era Of Mining. 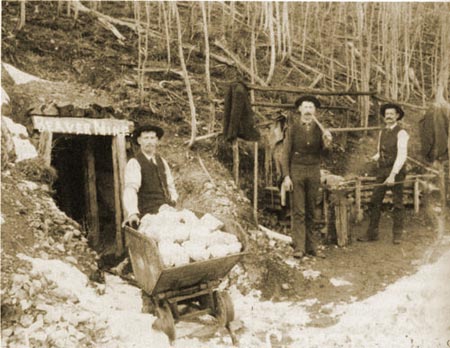 Bright and early on an unseasonably warm day, our threesome rolled south out of Lovely Ouray on the legendary not-for-acrophobs Highway 550. I was invited to join a couple of Hiker Babes with aspirations to become "Youtube Babes" (apparently, being in my "Hiker Babe Harem" wasn't good enough). Anyway, they needed stage names so Ruthie and Bobbie consulted their alter egos and came up with Ruthless and Reckless, "Two Old Broads" who get "high" hiking in our San Juan Mountains and further demonstrating to all that age is just a number. You can support the "Two Old Broads," Ruthless and Reckless, by subscribing to their Youtube Cannel. You never know what to expect from a couple of quirky gals who's motto is "It's not a hike if nobody bleeds."
This trek has Ruthless and Reckless headed south toward Red Mountain Pass to photograph and video Ironton, an old mining ghost town. From there it's on up to the Colorado Boy and American Girl mines, followed by a glimpse at a long-abandoned railroad turn-style from that dates from the 1890's.
A casual half mile stroll from our tailings pile parking spot brought us to the scattered ghost town remnants of Ironton. 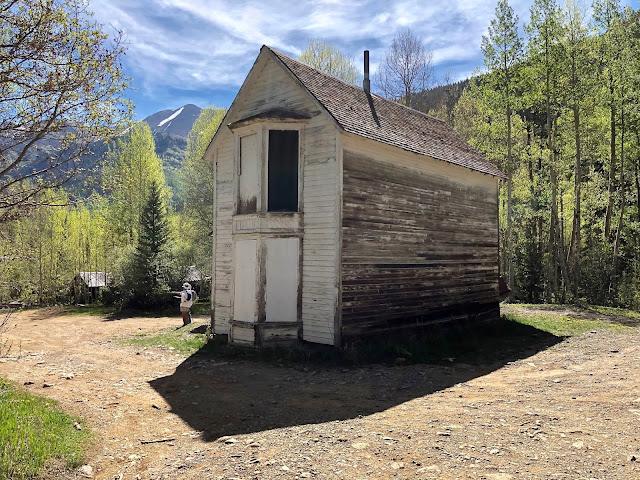 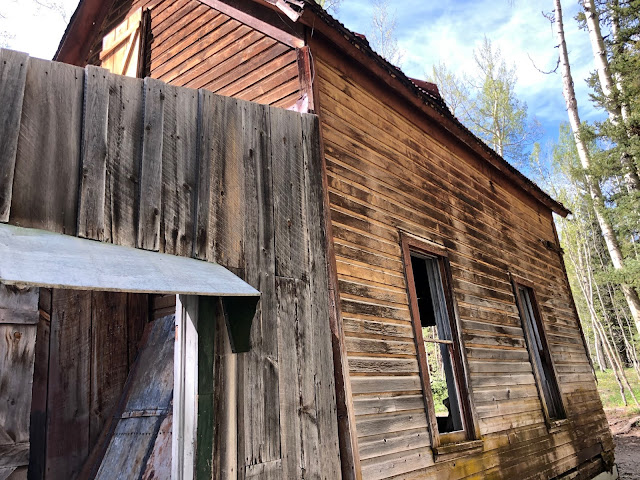 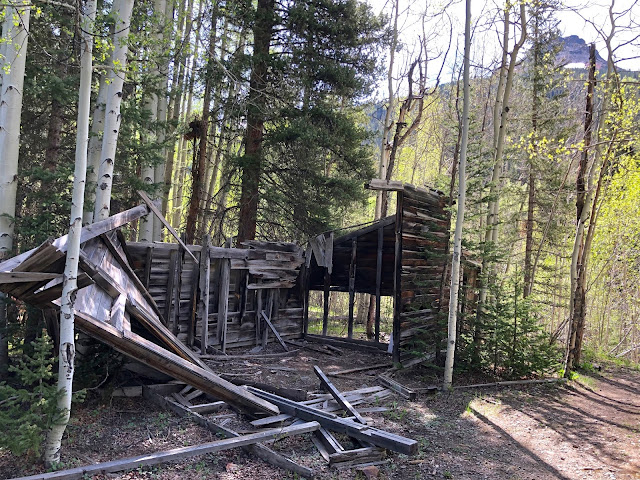 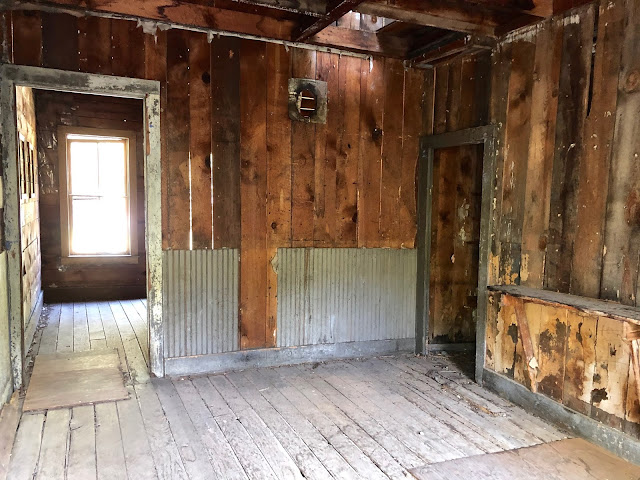 A recent winter visit to Ironton... 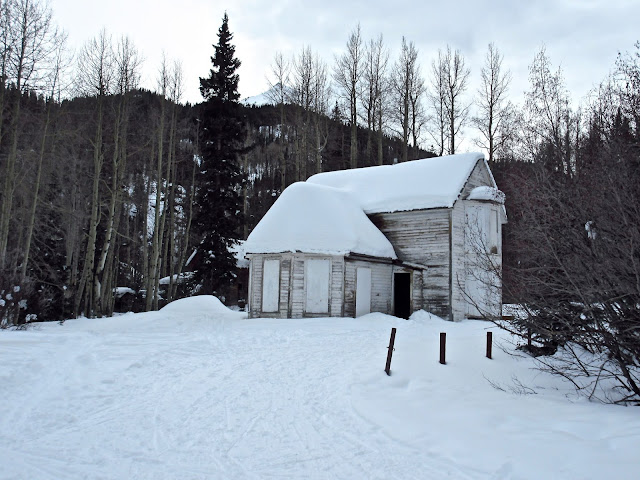 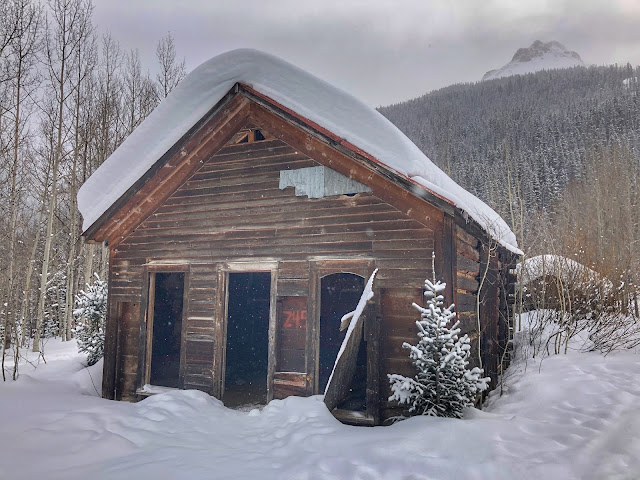 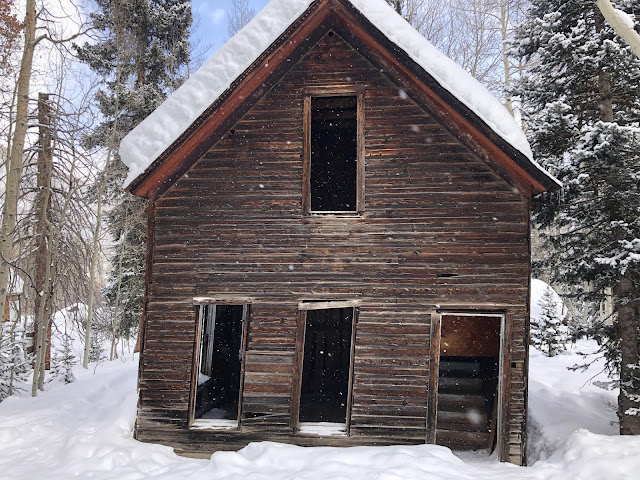 Ironton’s flat location along with a lower elevation made it a natural shipping point for other mines whose elevations were as much as a thousand feet higher up in Red Mountain Mining District. Before a railroad line was built from Silverton, supplies for the mines arrived on pack trains made up of mules and burros that found themselves lashed up to every kind of merchandise imaginable. Lumber, piping, sides of frozen beef, and even the odd coffin would arrive on the the backs of these poor beasts of burden. When unloaded, the pack trains would then carry ore from the mines down mounain to Ouray on a toll road now known as the “Million Dollar Highway.”
Ironton was tame as towns went in the Red Mountain District. Red Mountain Town, to the south, ranged from raw to raucous, with over 20 saloons...not to mention a few brothels...to "service" the miners. As one story goes, a minister came to Red Mountain Town with hopes of establishing a church. He was told no, and if he knew what was best for him he'd best hit the road. Undeterred, he tried again in Ironton, where he was warmly received with open arms.
In the beginning, mines in the Red Mountain District relied on lead and silver for profits. Then, in 1898, gold was discovered deeper underground. But the deeper the mine, the more water. It was a constant problem due to the water's high concentration of Sulfuric Acid that quickly corroded the machinery needed to mine the gold. As a solution, an extensive 4800 foot "drain" tunnel was built in 1906 to rid the deeper mines of water.
Shortly after the water diversion tunnel was built, fluctuating prices for lead and silver began to marginalize profits. Slowly but surely the population in and around the Red Mountain Mining District begin to shrink from thousands to hundreds. In the end, only a small group of optimistic "holdouts" remained, some as late as the early 60's, before conceding that the good ole days for striking it rich had passed.
Nowadays the Gold Rush has become more of a Real Estate Rush as people are buying up old mining claims to build cabins on. To do that legally the owner must "actively mine" the claim (wink). But "mining" is not well defined in the regs. I suppose moving a shovel full of dirt a couple times a year is all it takes to skirt the grossly outdated "Mining Act Of 1872." The mining lobby is still alive and powerful. Take note at how repeated attempts to revise the antiquated Act died in Congress. 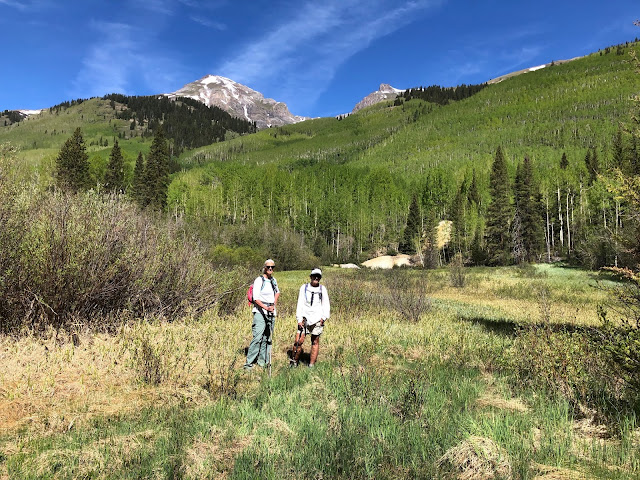 Our next scheduled visit was at The Colorado Boy Mine, a beautiful hike on a beautiful day in the mountains. 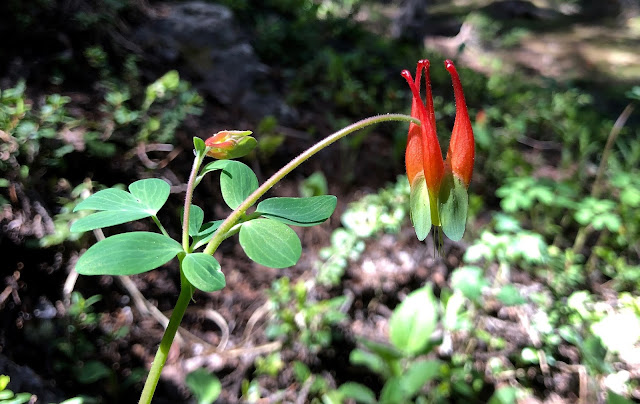 If you asked a dozen locals to "meet up at the Colorado Boy," ten of them would show up at the namesake Brewery instead of the actual mine. I would be one of them! A lot of good names up in the Red Mountain Mining District just waiting to become brew pubs :)
Ruthless and Reckless shot a little video while I shot a few photos... 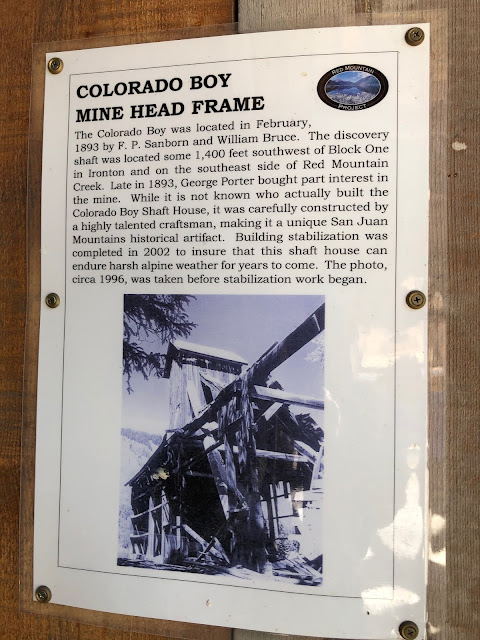 We then continued our hike from The Colorado Boy Mine to an old railroad line that was key to the (temporary) success of mining in the Red Mountain Mining District. Once completed to Red Mountain Town in 1889, the Silverton Railroad enabled cheap transport for mass quantities of ore, as opposed to the backs of burros.
Though all but a few scatted rails are long gone, there are sections of the old narrow gauge railway near Red Mountain Town's Ameican Girl Mine where the original railroad ties are still in place. 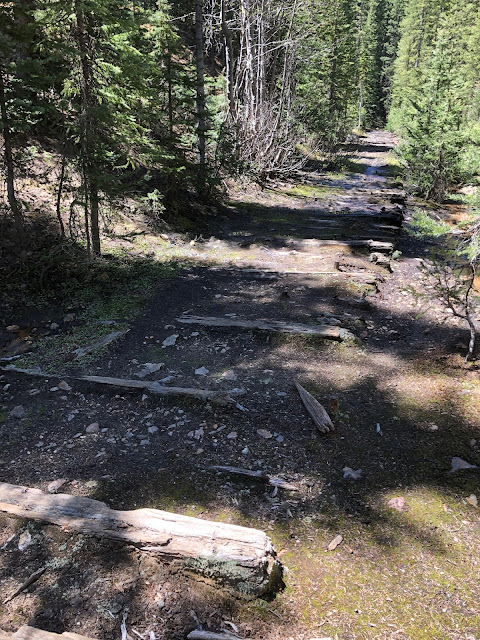 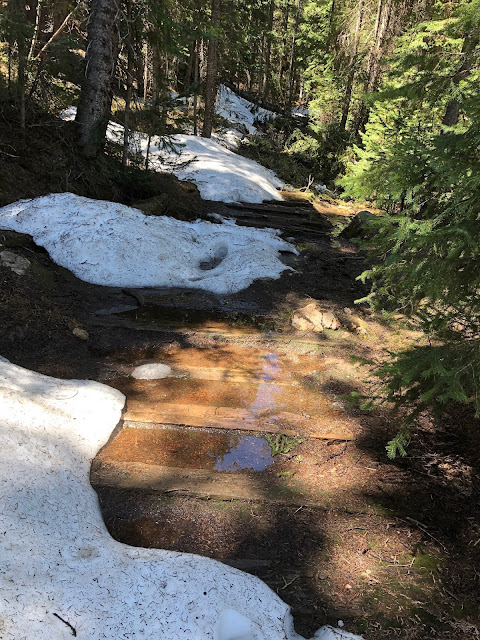 Being limited to slight grades, the problem with etching a railroad bed on the side of a steep mountain is, where and how does one turn the damn thing around? Maybe you can spot the answer in the two photographs below... 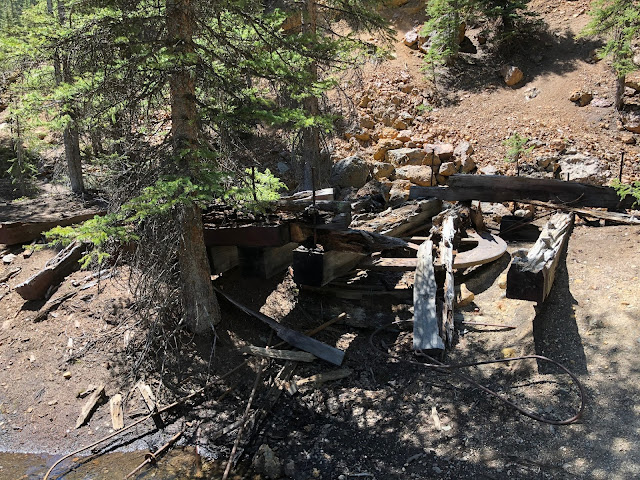 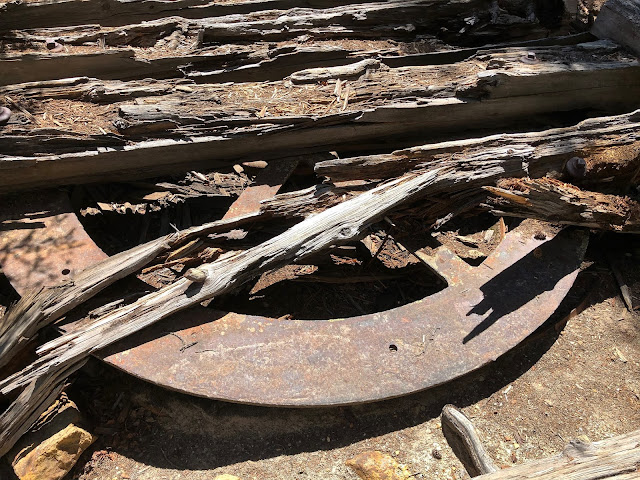 The somewhat poorly written notice below explains the solution. Simply put, install a humungous steel wheel; cover it with heavy timbers sized to accommodate a steam engine; extend the railroad tracks onto the timber covered steel wheel; uncouple the engine from the rest of the train and motor it on to the timbered wheel; rotate the timbered wheel 180 degrees or until the steam engine lines up with a parallel set of tracks that bypasses the ore and passenger cars and rejoins the original track; back engine up and recouple it to the train. Easy peasy. 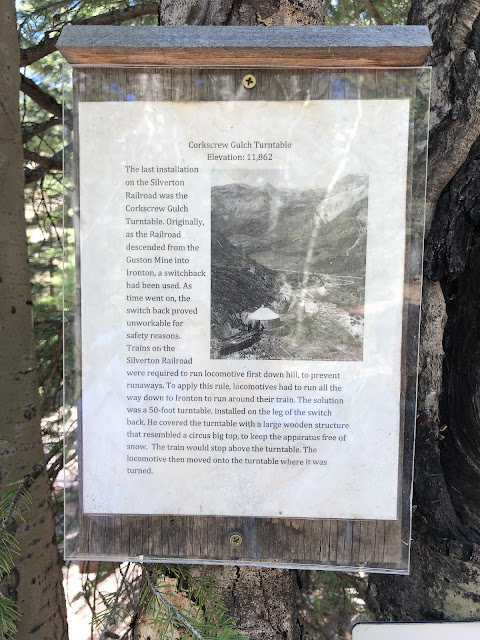 Our last mission for the day was to inspect the nearby American Girl Mine. 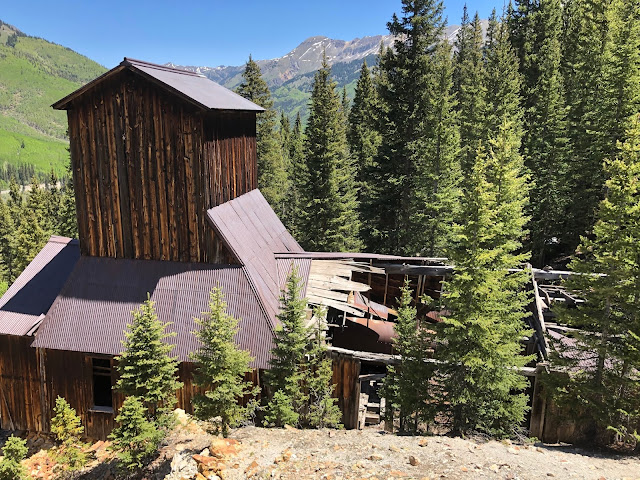 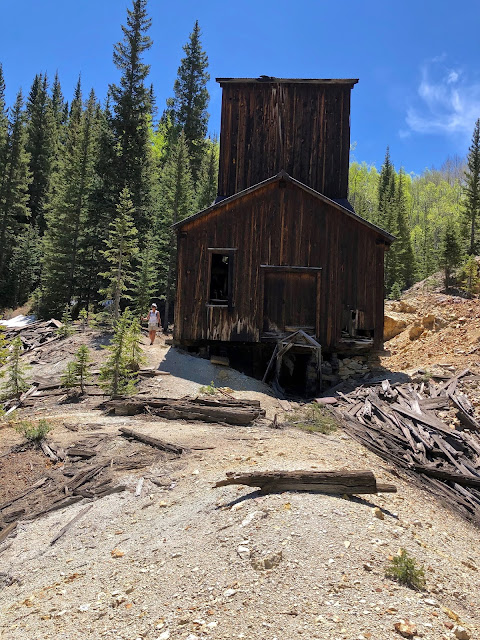 It's not uncommon to come across miles of old waterlines, each section hand made our of wood. The wire winding around the outside is to hold the pipe together when it's under pressure. 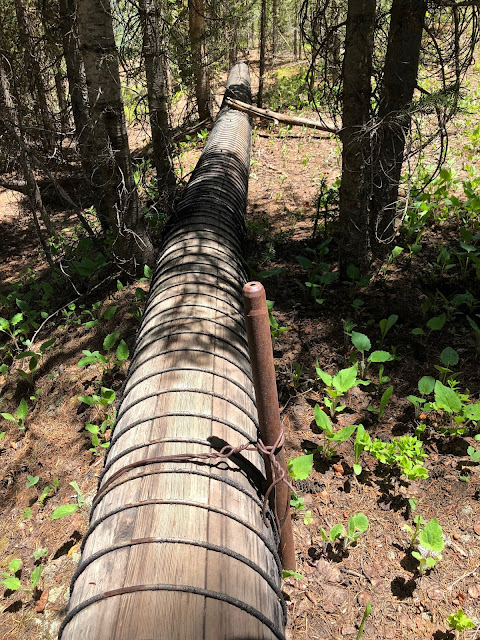 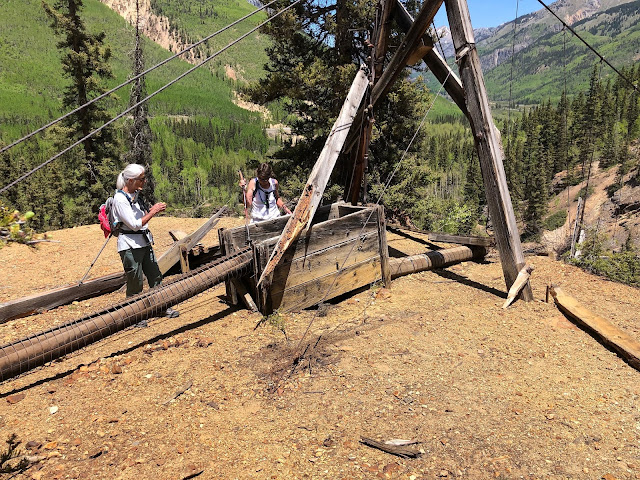 There was no going around deep canyons with waterlines. They just built a hanging bridge, which miners also used as a shortcut to the other side.
Peace out,
Mark and the "Two Old Broads."
Be sure to subscribe so you don't miss an episode...like the upcoming Via Ferrata.
Posted by Box Canyon Blog.com at 8:16 AM