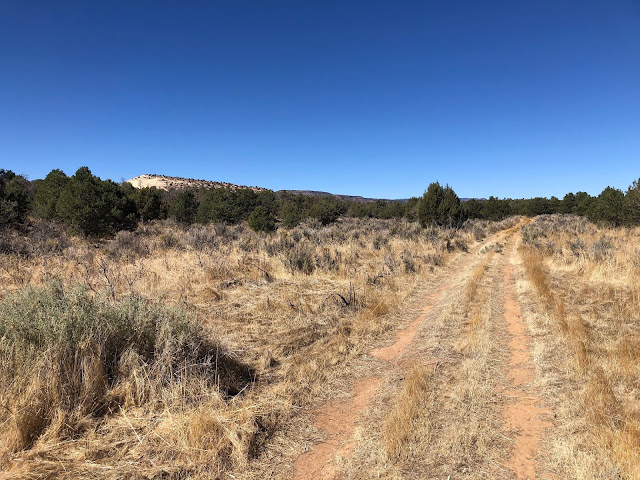 I guess you could say it's one of those "love/hate" things. While I (99.9% of the time) detest  ATVs, I love riding the network of trails they leave in their noisy, dust-raising wake. And one thing for sure, there's no shortage of ATVs trails to bike in Utah...except when you really need one.

And now that I've put that out there, you can bet your sweet bippy that the gears of "Karma" have been set in motion. Someday, way out in the middle of nowhere, I'll (pick one): 1) Take a fall 2) Have a heart attack 3) Get bit by a rattlesnake 4) Come down with heat stroke 5) All the above...and it will likely be some tattooed teeny bopper behind the wheel of a Razor that comes to my rescue.

Having put in an 11 mile hike the day before—and the day before that—it was time to give sore feet a break and straddle-da-saddle on the ole Fat Tire.

I'd been eyeing an ATV trail about a stone's-throw from camp. It looked promising...at least the first couple hundred feet did, anyway. Though ATV trails don't always show up on my app map, I assumed I could string a few together and "hook and crook" my way down to Cottonwood Road. From there, I could reconnect to the road that leads back to my camp. Alright! A real exploit, which is another way of saying, lots of unknowns. It always makes for an exciting outing when routes and outcomes are in question...or should I say, Questionabe?

Temps were forecasted to push upper 80's by afternoon so I wanted an early start. Maybe it was too early, though, as I nearly froze coasting down to the ATV trailhead. From there it quickly turned into an uphill, sandy grind, which flattened my goose bumps...along with a little help from a rising sun.

The goal of the day, come Hell or high water, was to find a way to Cottonwood Road, then regain the thousand feet or so of lost elevation, then make it back to camp, which would be during the hottest part of the day. (Sweat)

My ATV trail leveled out on a sandstone cap with good views all around. From there it promptly turned away from Cottonwood Road, so I detoured down the sandstone a couple hundred yards and found a little-used ATV track. It was sandy, cross-rutted, and grown up with weeds. But, it headed the right direction and was, for the most part, downhill.

Riding downhill in deep sand requires a skill set I have yet to master. One has to keep their speed up enough to avoid getting bogged down...fast enough to kinda float on the top. The problem is that with more speed comes bigger crashes. Floating along, just when I thought I had my "shit" together, everything went to Hell. I ended up face down in sage more times than I care to mention, legs all tangled up in my bike. Of course it was a hike-a-bike on all the uphill and level sections. A real "sand-trap."

So down, down, down I careened through tire sucking liquid sand, leaving a serpentine track worthy of a DUI ticket. Wobble/crash/push. Wobble/crash/push. But I was having fun...the day was young and, except for bloodied knees and a bruised elbow, I felt very much alive. "Challenging elements is what I do," I reassured myself.

A couple of sandy miles later I intersected another ATV trail. It was well used, which is to say, loose and sandy. Downhill to my left, uphill to my right. I chose left. Cottonwood Creek is down there somewhere, along with a road that will take me back to camp.

A couple crashes later, it occurred to me that if, for some silly/stupid reason, I didn't make it to Cottonwood Road/Creek, I had dropped beyond the point of no return. It would take a super human effort to hike-a-bike uphill through all the bottomless sand for however many miles that now separated me from camp. No way, Jose. I checked my Gaia App. While it showed my position, it wasn't showing the "trail" I was on.

Another mile of sand, losing more and more altitude, the trail spit me out at a sketchy pour-off. Hmmm, must have missed a turn somewhere. I might have found a way down or around the pour off, but opted instead for another set of tracks that turned sharply uphill. After lugging my bike to the top, I was met with a barbed wire fence and a gate. Might be private property, I thought. I didn't see any "Keep Out" signs so I slipped through the gate. Not 200 yards and the tracks petered out into a wash. The sun was really beating down by then. Shit. What if I have to hike out of here?

Rechecking my Gaia App, I realized I was only about 3 miles from Cottonwood Road...as the crow flies, that is. The App showed a nearby drainage that snaked it's way to the road. A million cow-patties later I found it. But creeks meander more corkscrew than "crow flies." Ever the optimist, maybe I could shortcut some of the long-ass bends and save some mileage by bushwhacking. Surprisingly, the stream bed was at first, ridable. But of course, it didn't last long. 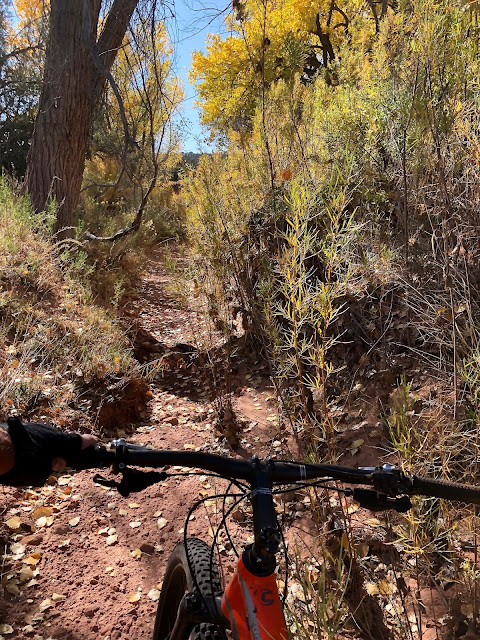 Much like a fraternity hazing, I rode a whiplash gauntlet of by limbs, saplings and various snags. 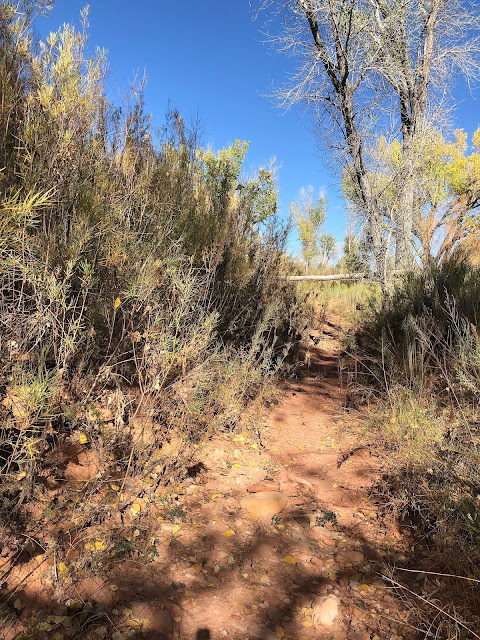 My stream-bed turned out to be a feeder to the main drainage that, according to my App, led to Cottonwood Road. Oh well, water flows downhill. Guess I'll "go with the flow." 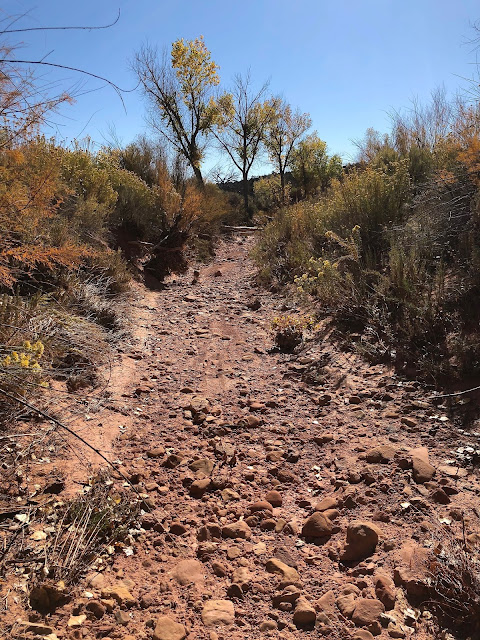 Then came loose cobblestones, interspersed with unridable sections of sand. I rechecked Gaia and noted that I was more paralleling Cottonwood road than the proverbial "crow" would fly. A cow path caught my eye. It looked smooth and ridable! Rather than being "hazed" by saplings, sand, and cobblestones, I opted for "single-track," hoping to shortcut extraneous bends in the creek. 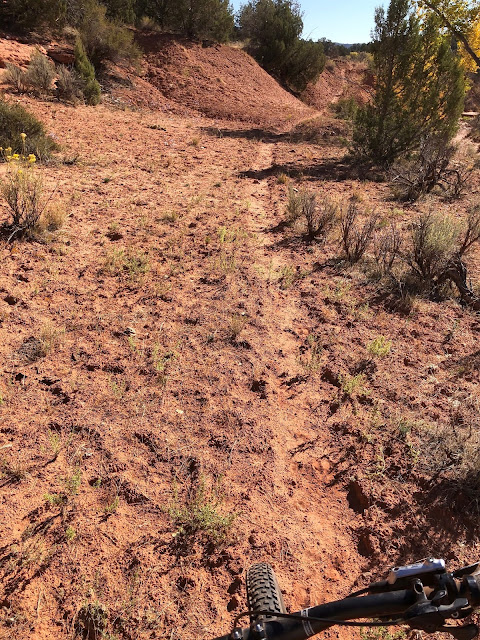 The way of "the cows" was short-lived. Before I knew it I was right back in the creek bed. At least by following the stream bed there would be no shortage of shade. I stopped to rest under cottonwoods, popped a Gatorade and reevaluated my reckless choice for the day. 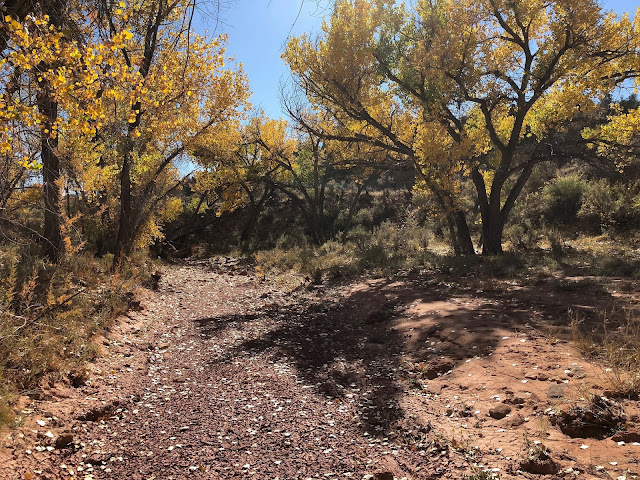 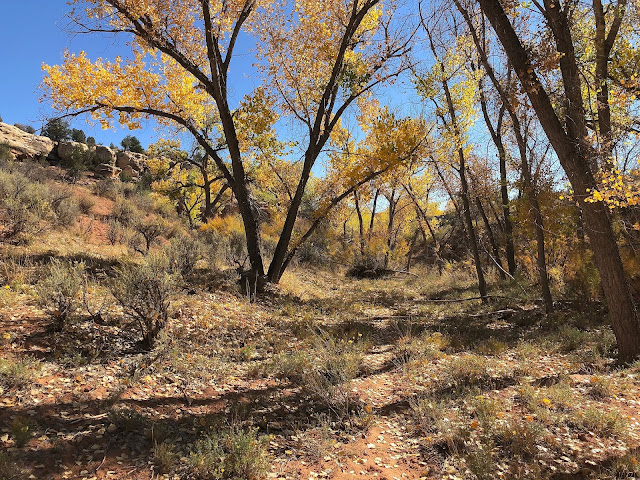 Stumbling along, I resumed crisscrossing between cow path and creek bed...hiking my bike more than riding it, lifting it over 5 strand barbed wire fences. The App showed tedious progress toward Cottonwood Road. But aren't the fall colors nice...flaxen leaves rustling in the breeze. 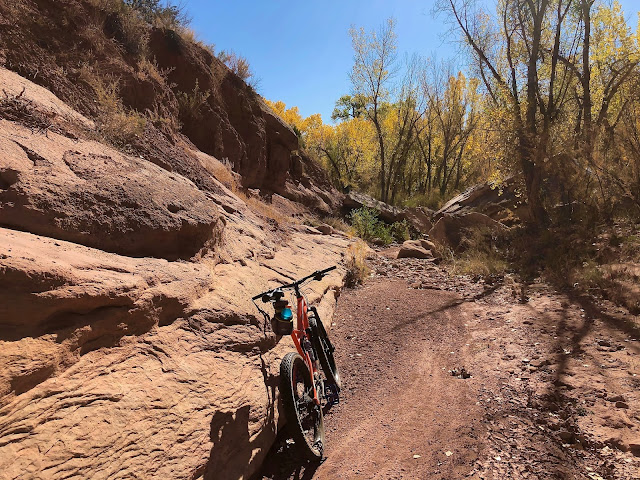 Another check of my App showed I was actually heading away from Cottonwood Road. Hell's Bells! Time to bushwhack!!!

Unfortunately, I failed to note how high the banks were getting. I literally had to carry the bike over my head to get through snags and climb out of a literal Sand Trap. The wade through rattlesnake brush under full sun and 85 degree temps is all in a day's work for fools.
Maybe it was the heat. Maybe it was the lack of progress toward a rideable gravel road. Maybe it was exhaustion. Maybe, it was all three. Whatever the reason, I began to get careless, thrashing through brush and sage, trying bushwhack a shortcut. That's when it happened...
There are no less than 7 species of rattlesnakes in Utah. And warm temperatures would have them out "sunning," laying partly in shade, partly in sun, in order to keep their body temps in the comfort zone. Pushing my bike, I didn't notice this guy until my front tire was about to roll over him. 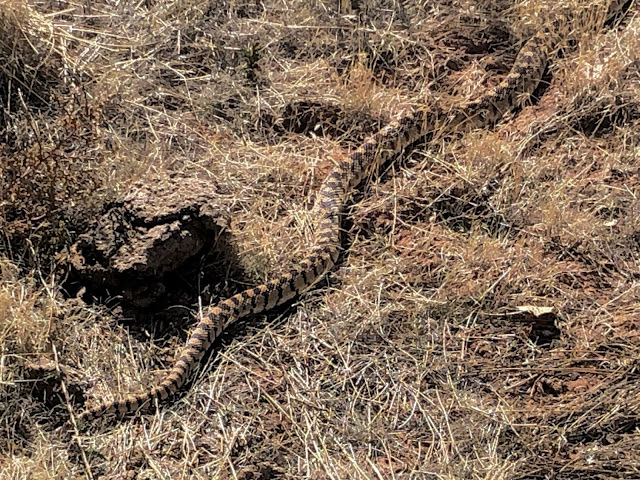 "EEK." I screamed like a little girl, recoiling from one of the biggest rattlesnakes I've ever almost stepped on. I didn't even get a good picture of it, I was so shaken. The video below is a little better. I couldn't see it's head very well, but it had that diamond shape desert vipers have...tho it seemed to only have two or three rattles.

Needless to say, I slowed down and watched my step. 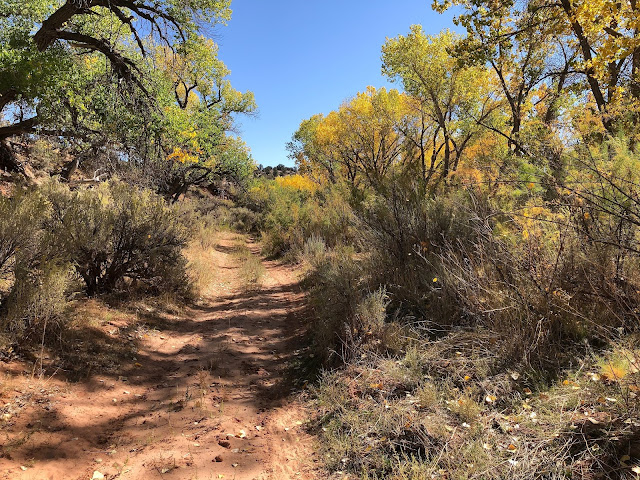 I followed the ATV tracks cross country, hoping (praying by now) that they would lead to an actual trail that would lead to Cottonwood Road.
Unfortunately the ATV trail was churned sand...so fine it was more dust than sand. Still, dragging my bike beats bushwhacking. Did I tell you how hot it was? 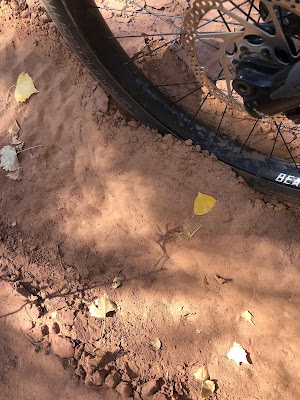 My App showed about a mile to the road. Only then did the trail firm up enough for me to ride out. I spied a Rv hunting camp. Cottonwood Road had to be close. Yes, there it is!
All that remained was 7 miles and 1,400 feet of elevation gain (ugh). I chugged my last Gatorade...felt the blessed surge of glucose hit my bloodstream. I can do this!
The roads back to camp... 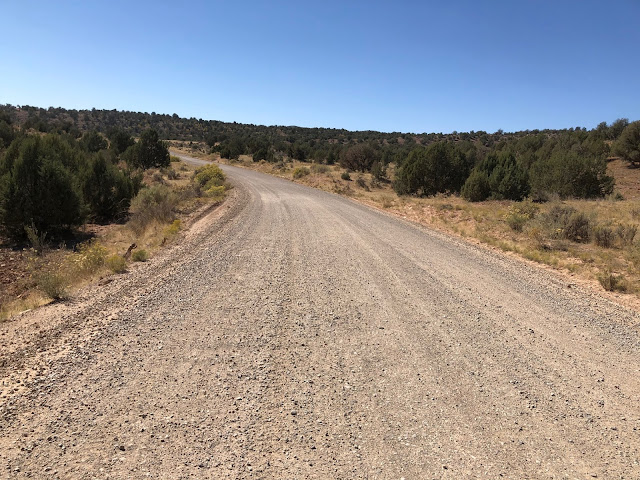 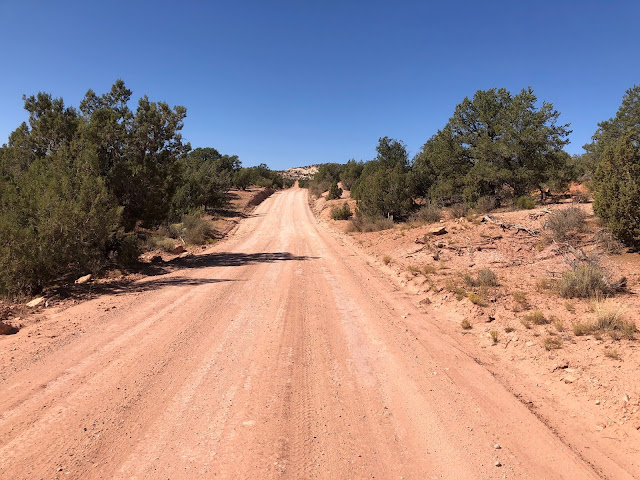 It's a weird thing, day after day, boondocking alone in the middle of nowhere. In the mornings I can't wait to get out of camp. By afternoon, though, I can't wait to get back. There's cold beer waiting in the fridge, along with leftovers to be warmed on the stove, and a story to tell about how some old fool spent his day exploring his wilderness surround. It takes the mind off politics and pandemics, and that's good for mental health.

Peace Out! Stay tuned for more discoveries from Native Americans that roamed around here 700 to over a thousand years ago... cliff dwellings, petroglyphs, pictographs, pottery shards, corn cobs.

Posted by Box Canyon Blog.com at 7:54 AM