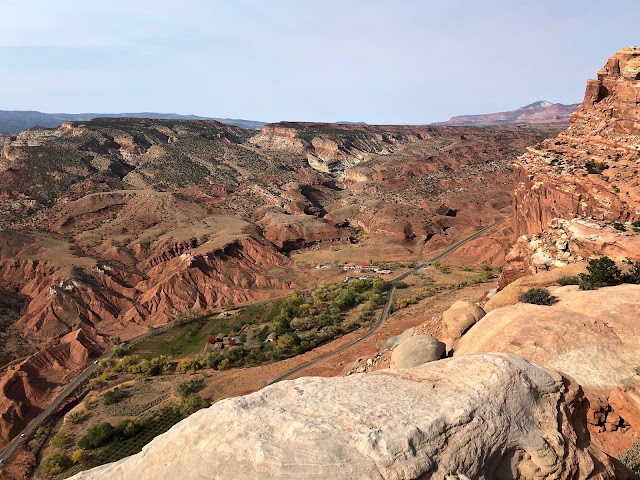 To all Rv'ers in search of summer's warmth from November through March, all is fair in love and weather. Especially when Old Man Winter huffs and puffs and blows his way into Southwest Utah's red desert, and my entire wardrobe consists of 8 pairs of shorts.
I know, I know. I've been whining how insufferably hot it's been.  But, relatively speaking, to a couple of old wandering dogs who strayed from the subalpine climate of home in Lovely Ouray, all-day explorations are not conducive to fun in full sun and 88 degrees. #HellOnEarth.

So I prayed to Almighty God. Lord, could you spare us a cool spell, please? Apparently, He/She/It is into practical jokes, and didn't take kindly to a desperate request from a fence-straddling agnostic. You want cooler weather? Ok, I'll give you cooler weather. I swear, I'm about to lose what little salvation I have left.

Sure enough, the next day we noticed a change in the same-ole, same-ole forecast. Hmmm. An arctic deepfreeze front was bearing down on all of Utah—borne on the wings of a three-day gale force, high-profile-vehicles-beware wind. And guess who's in the proverbial crosshairs? What to do, what to do...

Well, you do what all warm-blooded Rv mammals do when faced with wind driven cold...you try to Out run it, and flee thine ass farther south.

Pal Chris, who thought he would find a boondock somewhere in the Grand Gulch area in order to do a little more artifacting, instead packed up and motored south to a Colorado River campground just across Arizona's border at Lee's Ferry.

Bobbie and I, on the other hand, stayed clue-glued to the weather-guessers as to the exact timing of the oncoming apocalypse. They pretty much all agreed that "it" was coming, and that "it" had the potential to break record low-lows and record low-highs, but couldn't agree on the timing (there's always something when one really needs an accurate forecast).

Thus, we got our our calculators and did a little math. The composite average of CFDs (Collective Forecast Differentials, i.e., differences of opinion between weather guessers) revealed that we had a 50/50 chance of a window of 1.68 days to possibly (or not) squeeze 1.5  hikes in at nearby Capitol Reef National Park. Science, right?

We arrived to find our "secret" boondock area jam-packed with every conceivable type of Rv ever made, from humongous motorhomes with 4 slides, to fifth-wheels, to tiny i-pod trailers, to van-tramp vans, to tents, to car-campers. We blame this knee-jerk "Lets Go Camping" faze on the freaking pandemic. Suddenly, every stinking body who never went to camp and, heretofore, couldn't give a shit about shitting in the wilderness, is clammoring for kumbaya in "nature." Understandable, but unfortunate for the rest of us. With no less than a dozen expletives, I squeezed Daisy in between a van-tramper and a car-camper who thought everyone liked accordion music. The next morning I suggested moving to "the city" because everybody's left there to come here. Anyway, I digress. We got in a pleasant, albeit breezy, ten-ish mile Navajo Knobs hike. What cold front???

That night, a recheck of the forecast revealed that "it" was bearing down on Central Utah and Capitol Reef, with winds up to 70 mph and single digit lows. Bye bye.

Though our Rv style is more sit-a-spell than drive-like-hell, single digit temps is enough to freeze blackwater tanks and the nuts of anyone stupid enough to only pack shorts. We pointed Daisy south, headed to a boondock near Virgin, Utah... about 15 miles from Zion National Park. In spite of wind and cooling temps, route 12 from Torrey, through Boulder and on through Escalante, can not be topped. Period.

The BLM land around our Virgin boondock looked like a train wreck of campers, at least triple the usual number. Fortunately, our "secret" spot was unoccupied. In fact, no one was even close. Let the accordion music rip!

The next day was cold and windy as predicted, so we took a somewhat protected hike in Coalpits Wash. It was quite comfortable, though a little too cold for rattlesnakes. 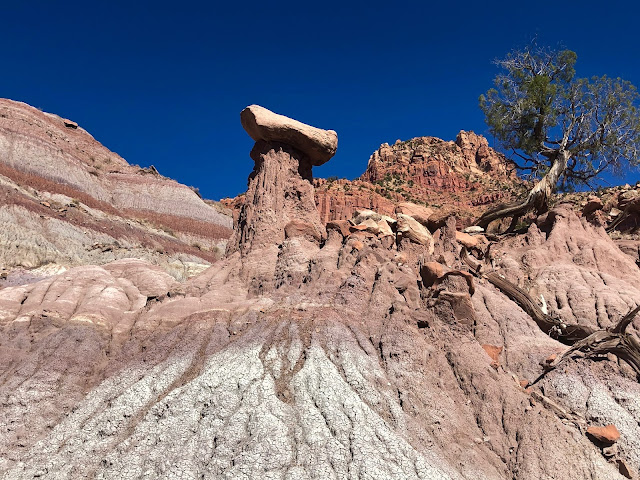 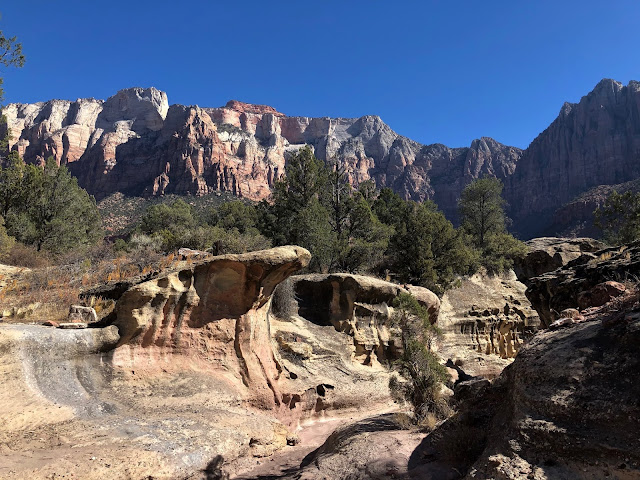 "It" finally arrived. Oh the wind, how it rocked and shuddered Daisy. Dishes and cups rattled. Things fell off walls and crashed to the floor. Windows clattered. Teeth chattered. A haze of red dust hung in Daisy's interior, worse than rush hour in L A. It's as if the Rv had been strapped to the nose of a booster rocket and launched through atmospheric turbulence. The gale was deafening. I even caught myself longing to trade our wind for the incessant blare of accordion music that we couldn't fall asleep to a few nights back. When choosing between two evils, pick the one that doesn't rock your "boat."

To make matters worse, especially for Bobbie, imagine being trapped inside for three days...with me!  Poor gal was ready to break ranks and head home. Later she recieved a text from Hiker Babe Ruthie that said it was blowing like crazy there, too. She stayed.

So, do you still think you want to sell everything, buy a box on wheels and live on the road? It's not all sparkly unicorns and pot-o-gold at rainbows end out here. Especially for full-timers. Note: Don't burn bridges behind you. Some are going need to retreat.

The wind finally abated, and the cool front was tolerable... when the intermittent sun came out from hiding. We made a plan to hike with friends, John and Charmaine, a couple of Airstream full-timers we met two years ago while boondocking around here. They are both outdoor adventurous types, so we we hit it off pretty good, even shared several hikes and a bike ride together.

John had a hike he wanted to show us on the far side of Zion's main tunnel. New Dots! But first, we took them on one of our must-do-every-year hikes, Tripod Rocks. Such a colorful area and we never get tired of it. Also, it's far from the congestion of hikes in the main corridor... 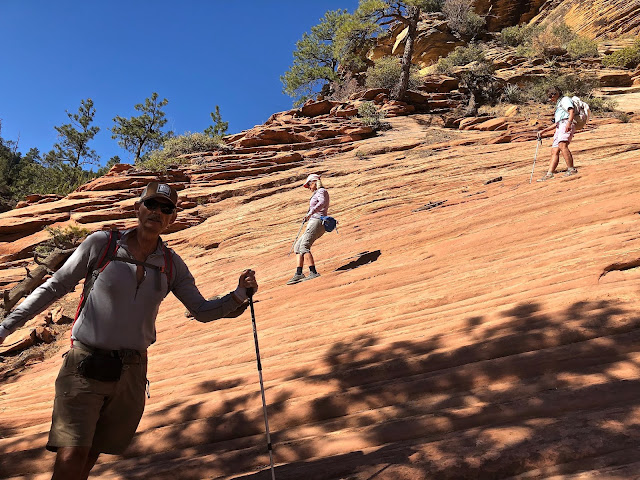 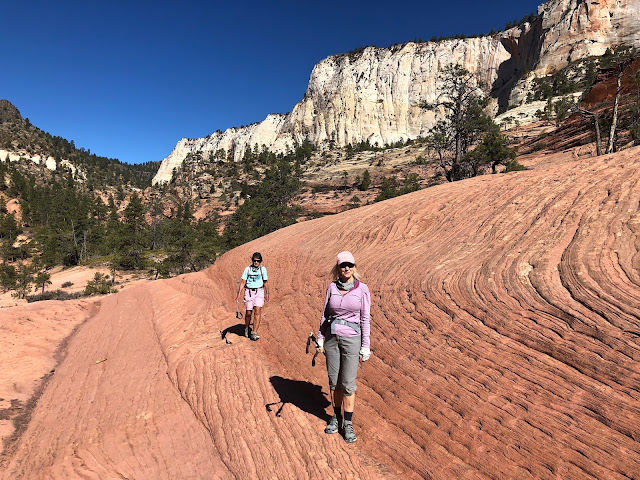 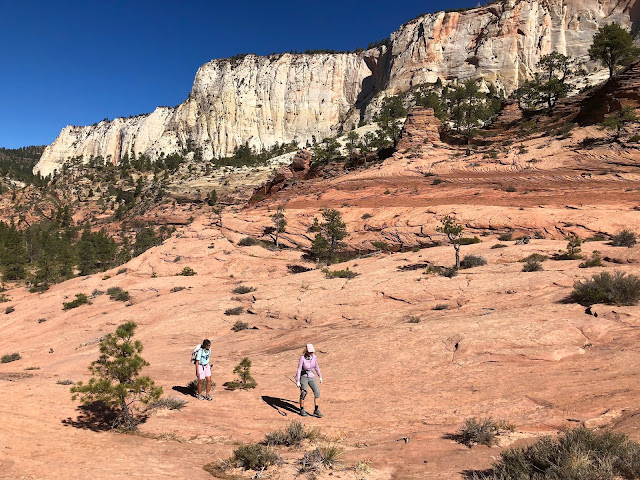 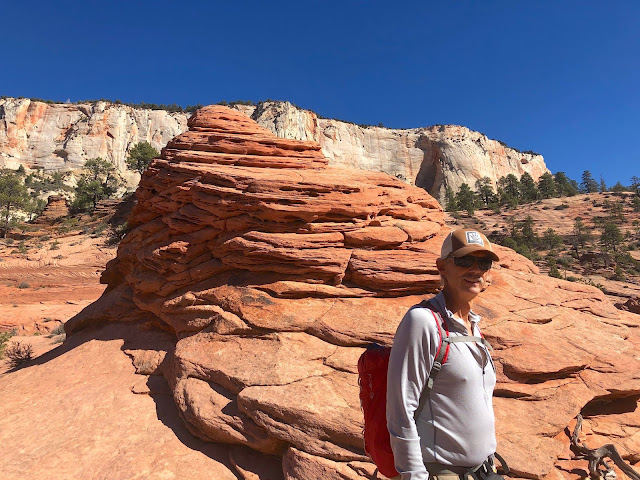 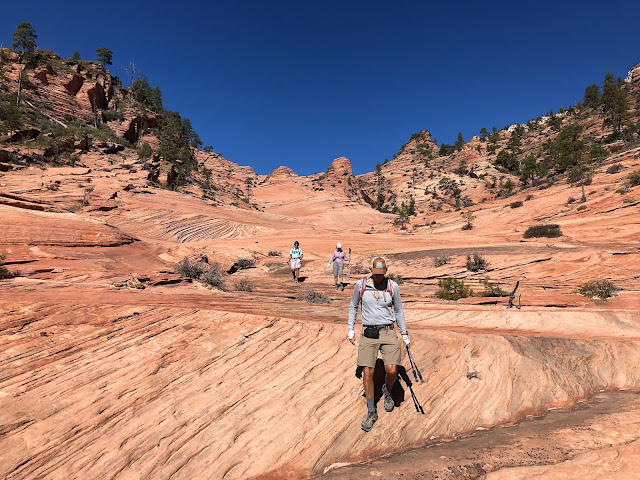 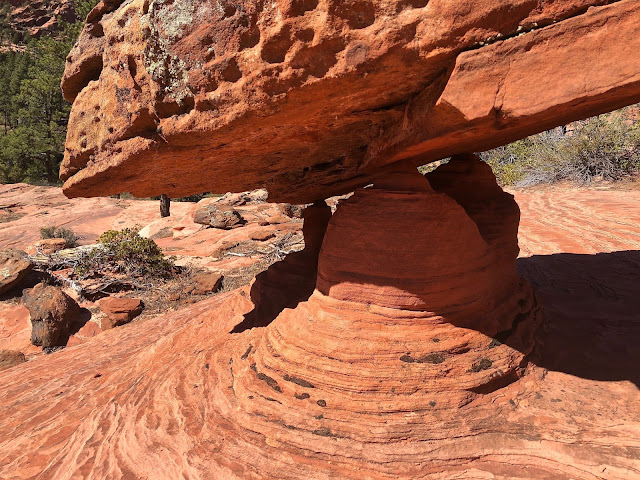 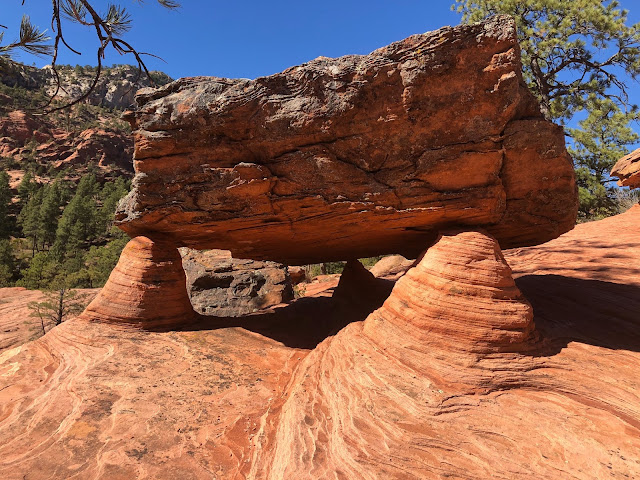 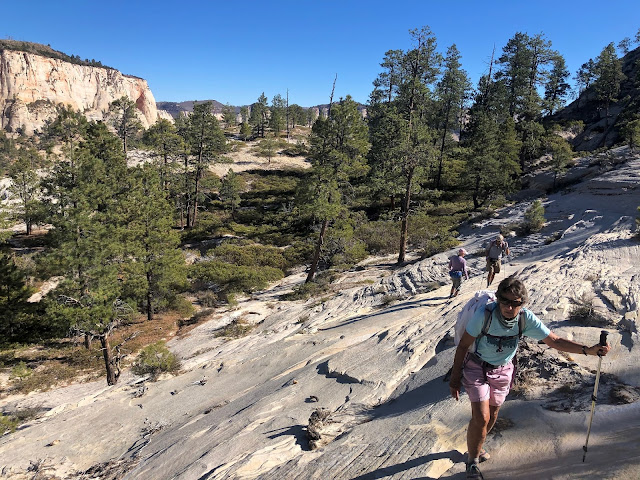 As long time readers know, one of my favorite things to do while boondocked around here (like, 2 to 3 times a week) is to bike Da Monkey up to a bluff of red cliffs that overlook Zion's majesty. It's a tough grind, over 2,000 feet of elevation gain spread over 8 miles...three of which are rolling flats. It's a first, second and (rarely) third gear grunt. But the views are worth every drop of sweat and calorie burned. In other words, I'm entitled to beer and ice cream afterwards :) 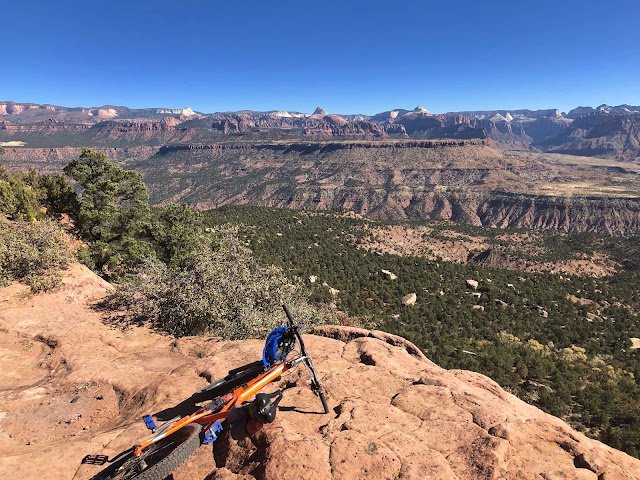 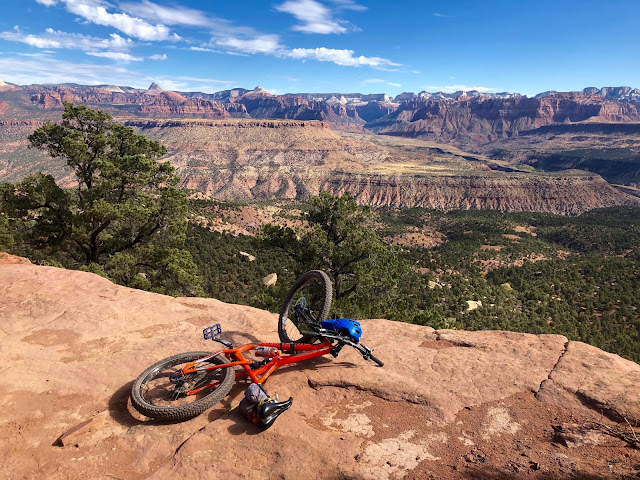 Now for our new dots hike with John and Charmaine. It begins with a familiar hike above Cock-eyed Falls, then bends eastward and climbs cross country. 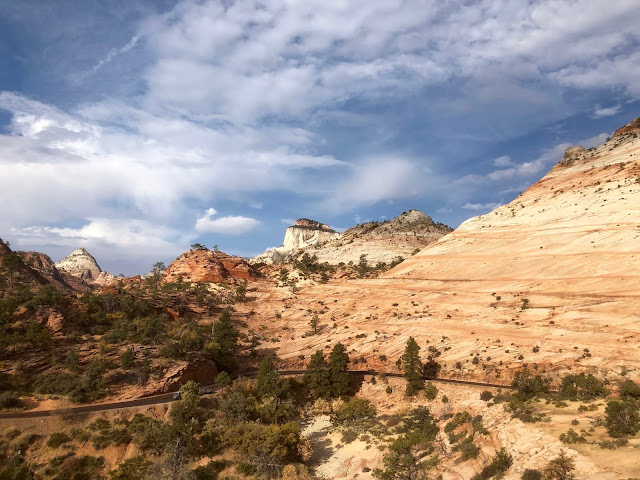 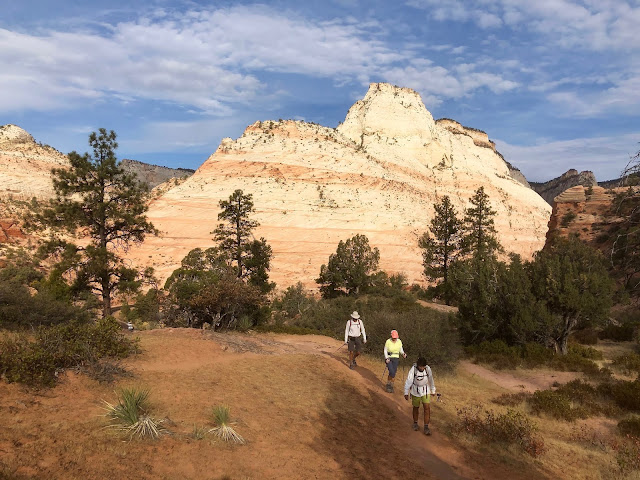 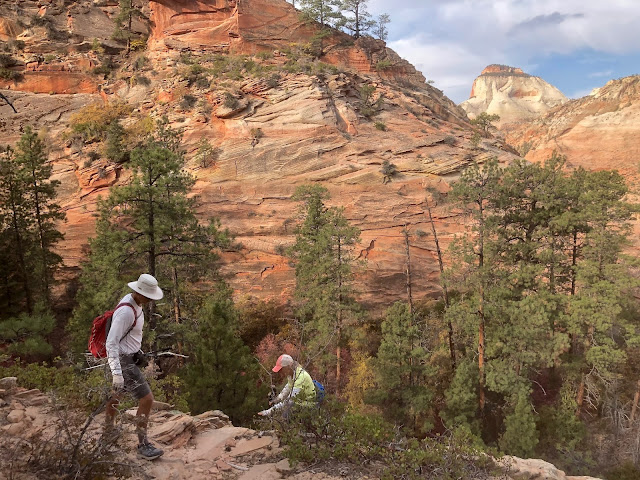 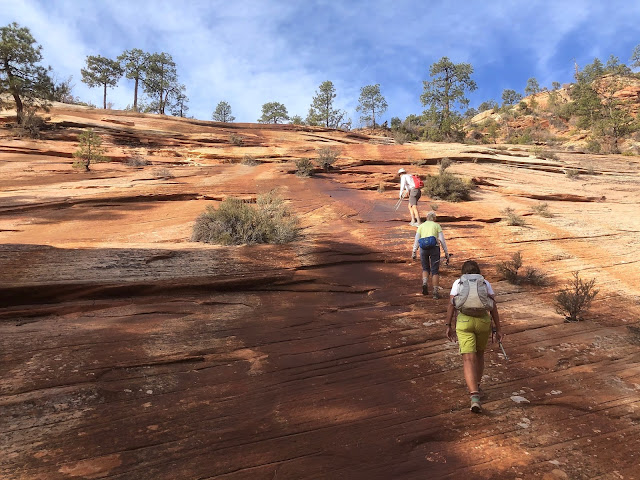 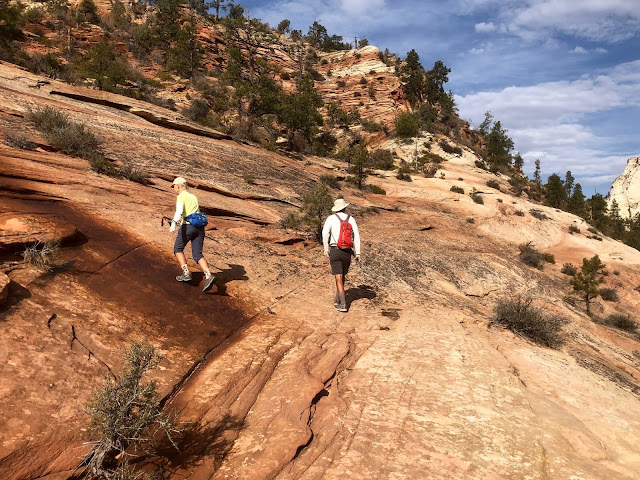 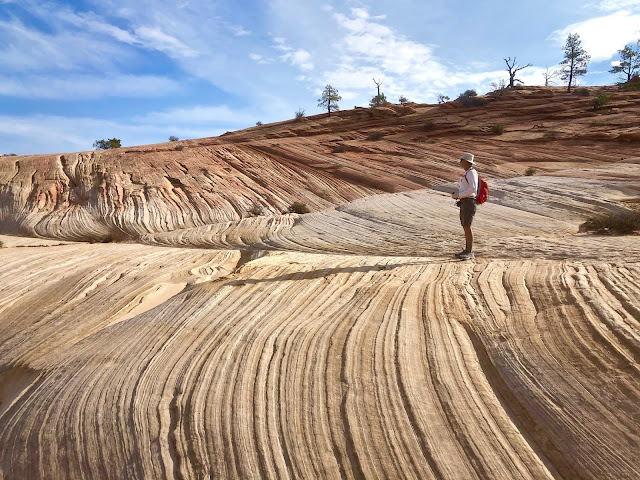 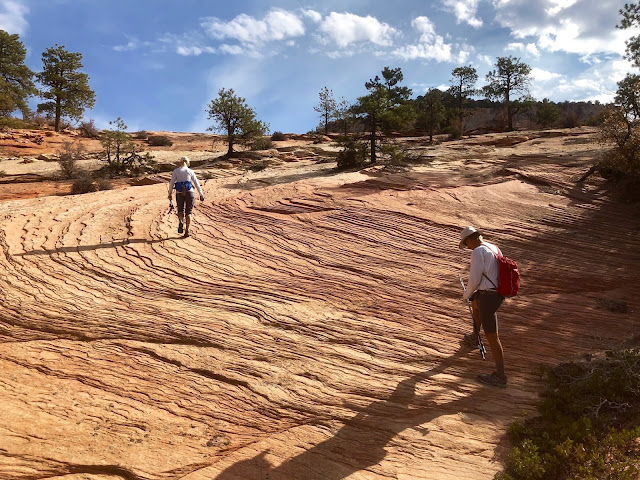 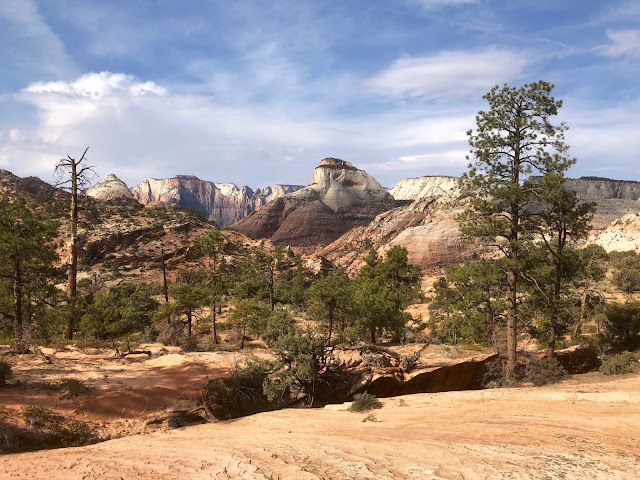 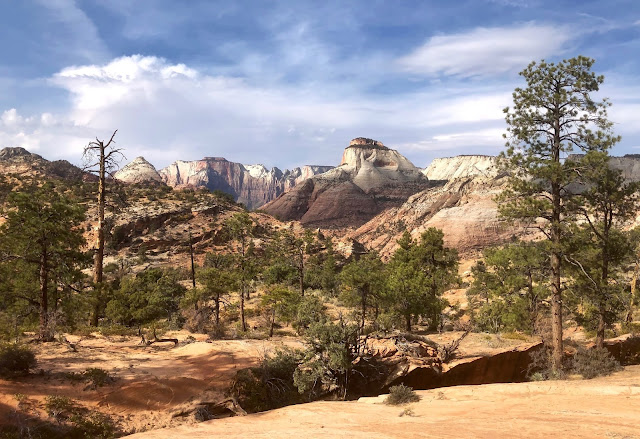 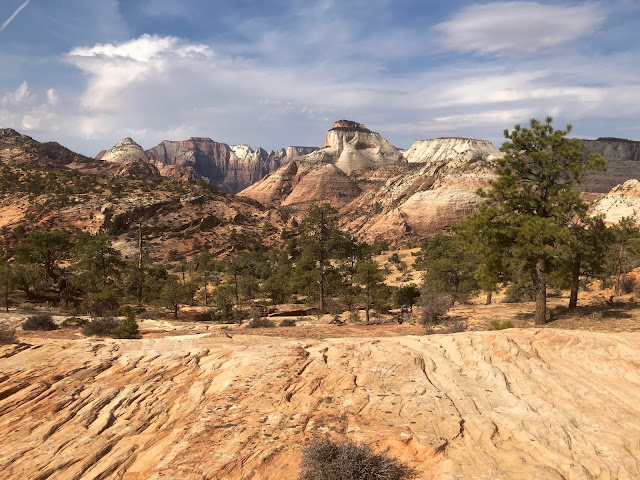 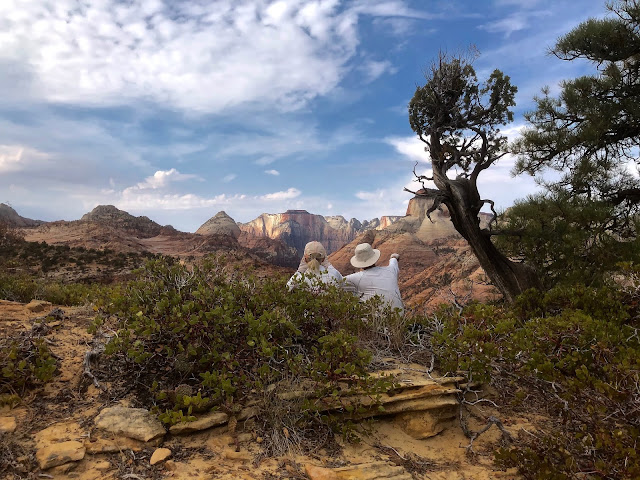 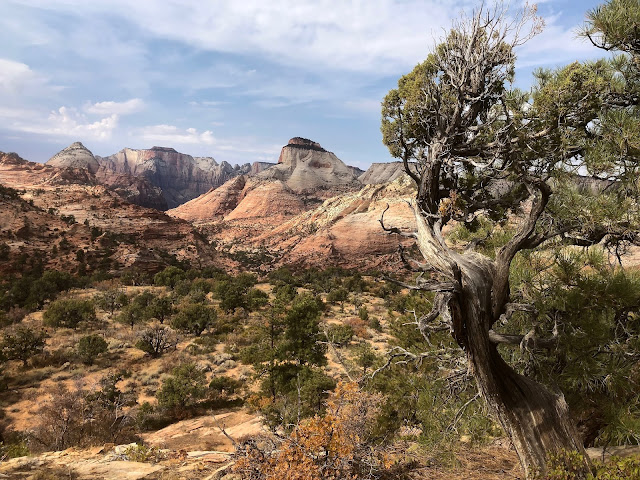 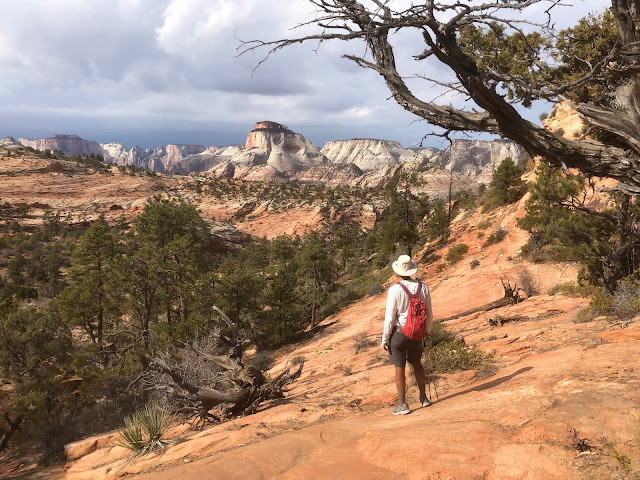 No trails. No people. No thoughts of politics or pandemics. Just a soul-soothing eye-full of nature at its very best. This is why, year after year after year, we end up hanging around here. Such magical landscapes in Southwest Utah, if not all of Utah.

Till next time, peace out people. And speaking of "Peace," it is our hope that posts like this usher a measure of peace into your day. Thanks to those of you who take the time to comment. Much appreciated!

And to everyone struggling right now, for any reason. Hang in there! Better days ahead.

“When we are tired, we are attacked by ideas we conquered long ago.” ― Friedrich Nietzsche