Looking Back, 700 Years Ago 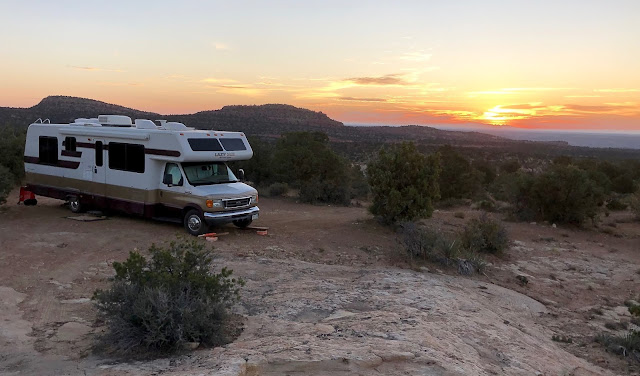 After several languid days of hike-a-biking mountain trails above Monticello, Utah, I motored on down the road to a favorite ridge-top boondock in the high pinion/juniper desert country west of Blanding.
It's ironic, yet not surprising, I suppose, that the "rebound" from a pandemic year that began with mandated lock-downs and orders to "Stay Home," Rv sales went through the roof.
So I was astonished when I rolled into one of my favorite boondock spots of all time and found it vacant. In fact, I had the whole ridge pretty much to myself. Of course it could have had something to do with abnormal daytime temps that hovered between 85 and 89 degrees.
What the Hell is with this year...no summer monsoon for Colorado, record breaking heat, apocalyptic fires driven by raging winds, a deadly virus that engulfs our entire planet in a matter of weeks, not to mention the maelstrom of hurricanes with rain repeatedly flooding gulf states such that, Noah, were he alive, would be building a second Ark.
Maybe I should have stayed high above Monticello where it was cooler and shade was plentiful. In order to get my daily allotment of exploring done before desert heat set in, I roll out of bed and hit the trail shortly after sunup each day. A stubborn high pressure system has been locked over Utah, driving skin-flaking humidity down to single digits and Daisy's indoor temps into the upper 80s by 3 PM. So I spend afternoons rotating a wedgie-inducing Walmart lawn chair to Daisy's shady side, nursing beer that's tepid before half gone.
Still, Life was Good. I wallowed in the serenity of aloneness and quiet, lathered in the ambiance of endless opportunities to explore new dots...maybe even get lost in the surrounding maze of canyon-laced wilderness. 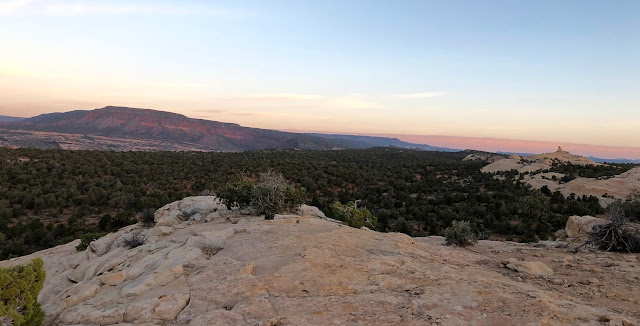 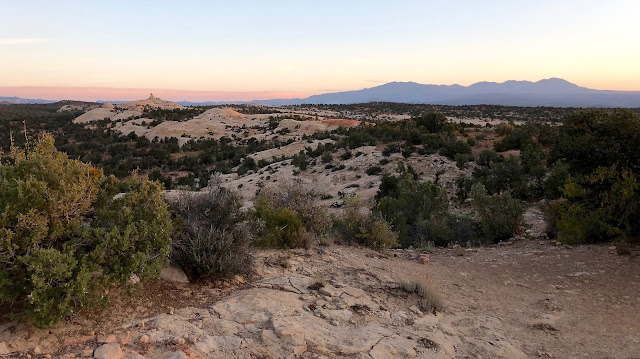 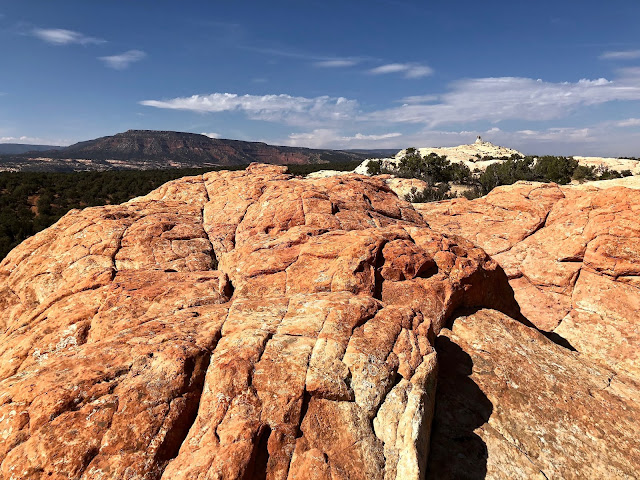 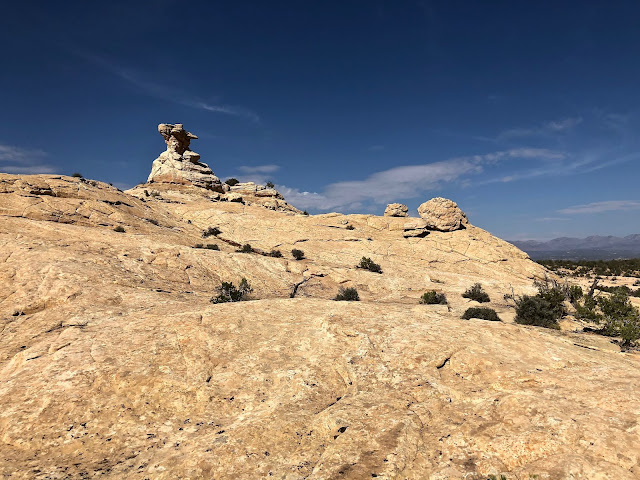 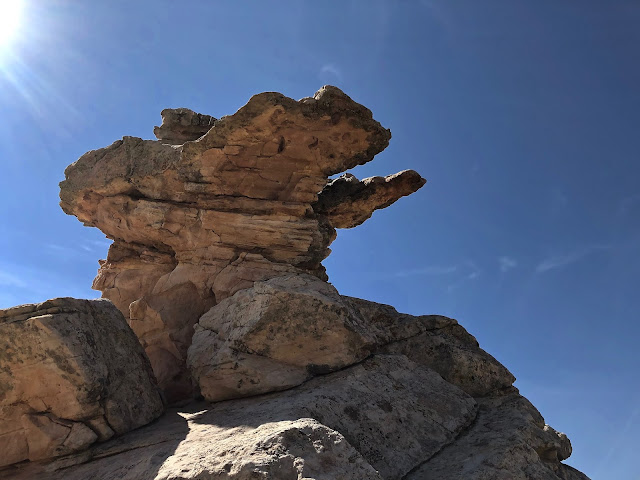 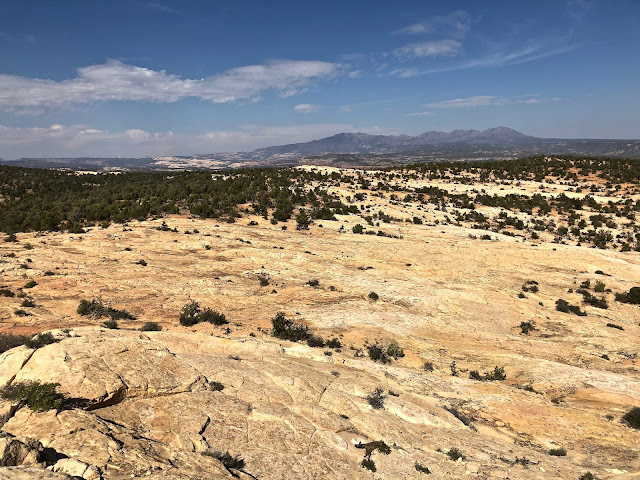 They say that "Prophesy" is often "self fulfilling. Emboldened by my new SPOT Emergency Beacon, I set foot to trail in search of a backdoor route to an ancient cliffside abode in a side canyon that Bobbie and I stumbled across a few years back. Could I find it again by approaching from the other side of the access canyon?
There is a "main road" not far from camp...and by "main road, I mean a ledgy/sandy/dusty/high-clearance required kind. On foot, not a half mile out, I was bored with it and hung a left on a lesser track...likely an old ATV trail. Then I noticed a familiar fat tire bike track in the red dust. Huh, it was mine, from a bike wander a couple days ago.
The trail crossed a shallow canyon to an intersection where my bike track went left. I went right and proceeded to head downstream (there was no water, of course) to see if I could find the side canyon that hid the marvelous cliff dwelling. Problem was, it required getting back to the other side of the canyon...a canyon that was about to cliff up and abruptly deepen by a hundred or more feet. I hiked down and stood on the edge of a "pour-off," gazing into my sudden "Grand Canyon," swooned with dizziness, then took a step back.
Way, way out in this middle-of-nowhere pinyon scrub-desert, dangling out over a massive pour off, it occurred to me that, in order for the SPOT to summon rescue, I'd have to be conscious enough to push the call button. Slowly inching back from the edge I popped a Gatorade and gazed into a massive canyon that faded into the haze of distant forest fires.
With no one to share a view, no one to express and reciprocate this truly "wow" moment, I began feel a bit lonely. We are social beings, after all, tho I may be getting over it in this our year of pain, suffering, and shirt-sleeve politics. I vowed to bring Bobbie to this spot, then scampered from the pour-off up to the ridge and continued "downstream," keeping an eye out for an access route down to a trail of autumnal cottonwoods along the creek. 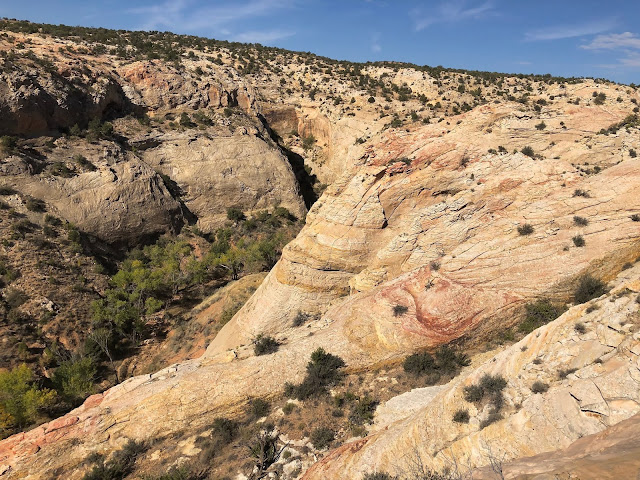 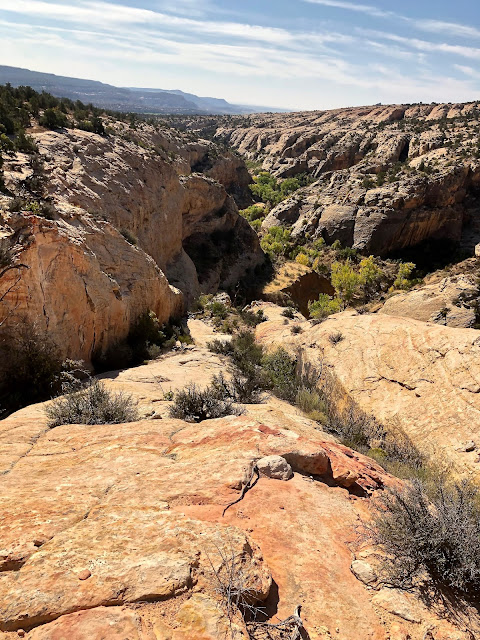 Following tight along the canyon's rim, I discovered a couple of steep sandstone ramps headed down toward the bottom. Unfortunately they both got sketchy and cliffed out near the end. I thought for a minute that I could have made it, but decided to continue on and try to find something easier...as in "safer." 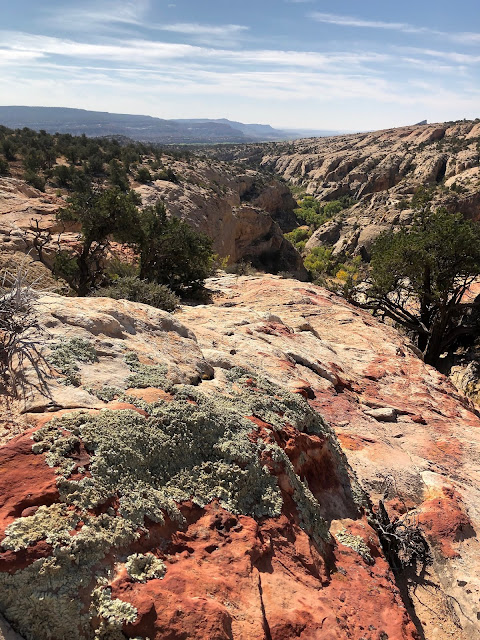 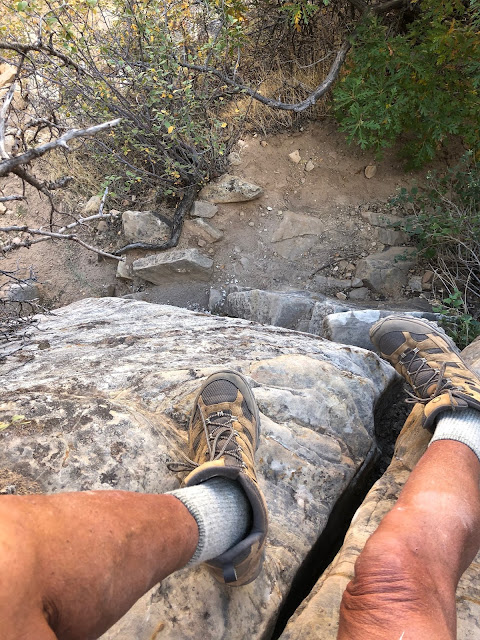 Of course I found a better way and, luckily, it landed me close to the side canyon I'd been looking for, the one with a cliff dwelling... 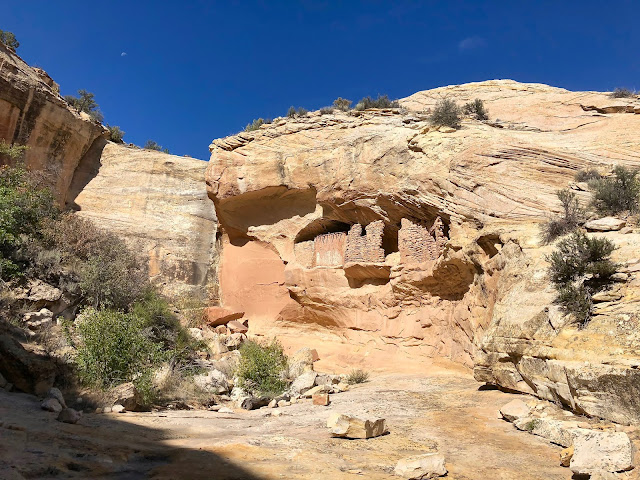 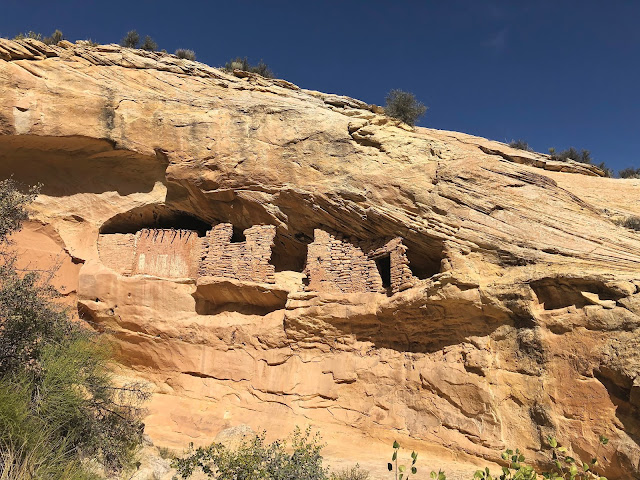 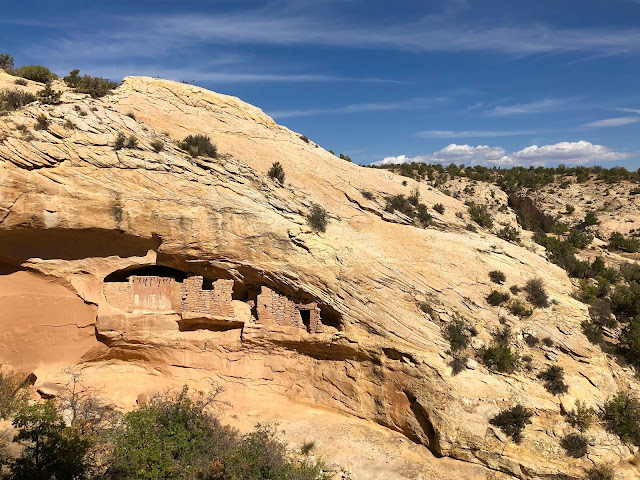 I had the cliff dwellings all to myself, not a single soul around. I found a place in the shade and just stared into the past, trying to imagine what life was like 700 years ago...hunting, gathering, and growing a little corn down along the stream in the lower main canyon. I could almost see children playing, hear them shouting at each other in some unintelligible language. It was magical... 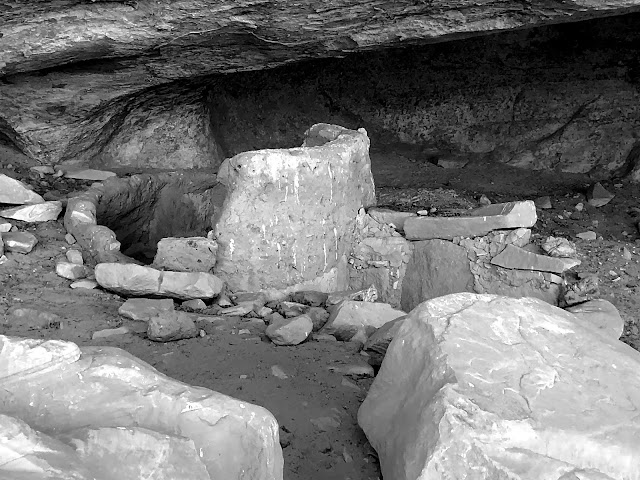 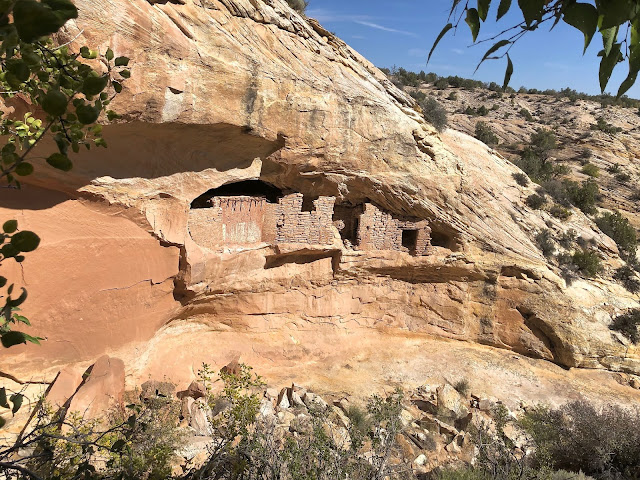 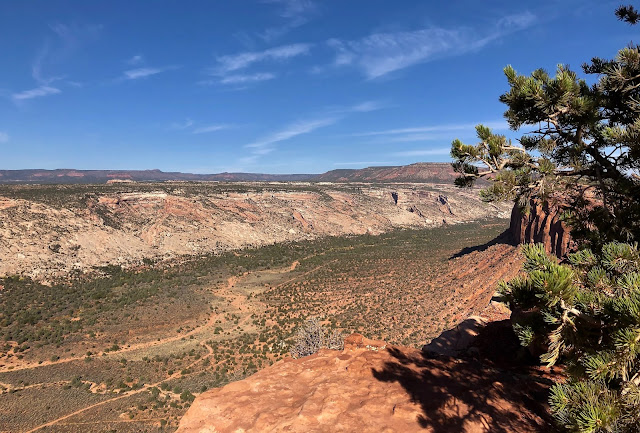 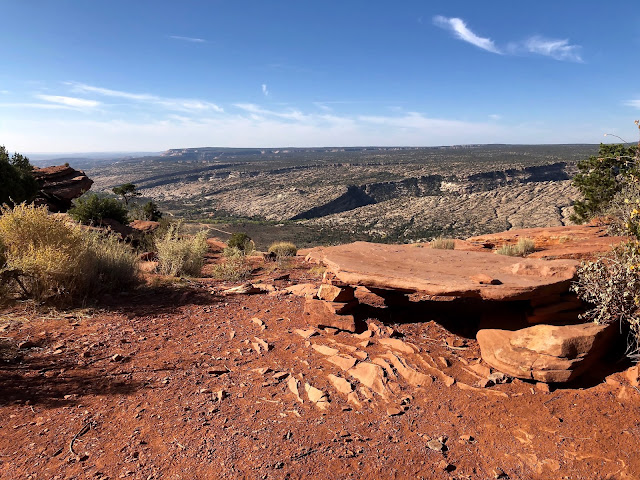 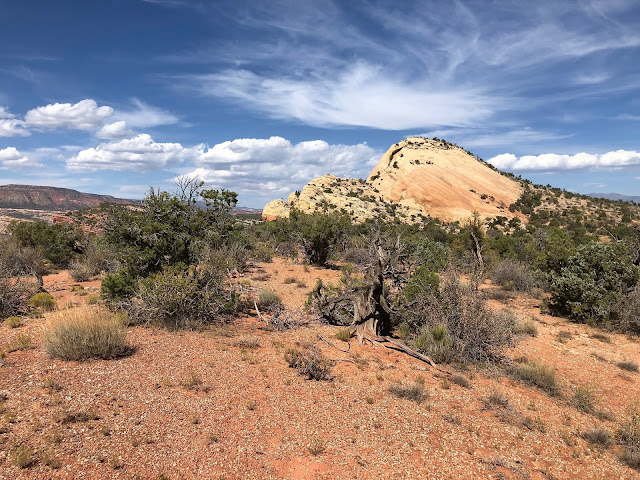 Peace out till next time,
On the road with Mark, and soon Bobbie, and soon, Rv Pal, Chris.
mark
Posted by Box Canyon Blog.com at 1:43 PM