HEADER PHOTO DESCRIPTION: Walking softly in the land of the Ancients...
NOTE: Open post and then Single Click On first Post Photo to view an album in a more detailed, larger format... 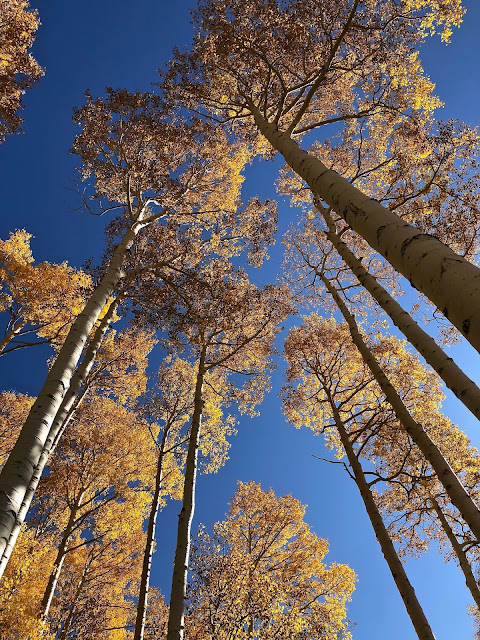 One thing for sure, Autumn will fade in a blink of an eye...

This past summer, however, seemed to drag on and on. Day in and day out, skin searing sun scorched Lovely Ouray with unfathomable (for this area) temps. They hovered near 90 degrees, which, at altitude, "feels like" 110. But it was a dry heat. Ha, that's code for amplified.

Rivers shrank to creeks, then creeks to dribbles, and, finally, dribbles to subterranean subways. Reservoir levels are plummeting, exposing long lost treasure-troves of snagged lures. Tundra wilted under brutal sun. Wildflowers pretty much took the summer off, while throngs of tourists storm-surged our town like a cat-5 hurricane...many of whom pooh poohed on our silly mask ordinance as an infringement on their "civil rights." Thus, the hottest sellers on Main Street, beyond masks for non-believers, was ice cream and cold beer.

The problem with a pandemic's mandatory "Stay Home" mandate is the resultant opening-of-the-floodgates when said mandate is lifted. To Hell with the "open floodgates" metaphor...it was more like the whole fucking dam burst. Rv parks here were jammed nuts-to-butts with everything from tent-campers to van-trampers to gilded Class A motorhome-glampers. No Vacancy. Hotel and motel clerks burst out laughing at reservation attempts (You want a room for this weekend? Next year, maybe...).

So yeah, it's been hot, dry, and tense here in once Lovely Ouray. We surrendered our "civil rights" to hike the Perimeter Trail long ago when it morphed into a procession of mostly mask-less, over indulged day-hikers looking to sweat off a few beers before Happy Hour.

But worse...worse than all the mask-less, "civil-rightous" climate-change denying morons (do you not see the hundreds of forest fires incinerating the entire west?), worse than the apocalyptic heat and threat of fire here, worse than the smoke from said fires that pollute our sky and lungs, worse even than Duckett's Market being sold out of my favorite Tillamook Old Fashioned Vanilla Ice Cream all summer long, is that this year our once-Lovely Ouray has been discovered by ATV adrenaline-seeking motorheads. I'm not talking the quiet little Ma and Pa putt putt four-wheelers of yesteryear (oh how I now long for those days), I'm talking the humungous full-blown, high-revving, high-speed, dust-raising, ear-shattering Razor-type ATVs...with long-travel suspensions built for speed over rough and rocky terrain. Yes, those abominable "things," and the guys who drive them as if in a race. "See how much fun wilderness can be kids?"

Pity. Our once walkable backroads are now cesspools of noise and dust from long trains of ATVs. Why do they have to ride in packs of 20 to 30 vehicles? Where did they all come from? I thought Silverton was ATV headquarters, not Ouray! Then, as all the cars and trucks from pandemic runaways aren't taking up every fricking parking place in town, we now have Quad-cab, long bed pickup trucks pulling 20 to 30 foot trailers needed to haul, you guessed it, Razors, taking up even more of our once uncluttered streets.

Most summers are busy in Ouray. We brace for it, practice patience and understanding that merchants need to make money during "the tourist season" in order to get through winter's slow season. But this year, the gates of Hell have been opened and we and others fear that this could be the new normal.

As I type this post, Ouray is still a sold out show. One unwanted (for me, anyway) off-shoot from the "new normal" is that, in the old normal years, kids would have to be back to school by now and their parents would have to be back to work. But not anymore. Thanks to the pandemic, that ugly looking clawed virus that makes us shudder, kids and parents can commute to school and work virtually from the convenience of a motel, Rv... tent!  Again, good for the merchants but "just another brick in the wall," so to speak, for those ready for the "off-season" to begin.

What does all of the above mean, bottomline?

It could be worse, is my attitude. All the above has pushed us deeper into remote backcountry, places we may not have sought out if not for "the gates of Hell being opened." How's that for a positive spin?

We're not much for standing in line for a table anyway, that and the pandemic has us eating more at home, which saves us money, a good thing.

But what if the tourist season gets extended through October and into November or December because of telecommuting tourists? Well, we've got that covered. I'm just about finished loading up Lazy "Dazy," shooting for a Saturday departure. I'm outahere.  Bobbie will lag here at home a while longer. We'll eventually meet up at some remote boondock in Utah. So, that's a good thing.

The one thing I wish for that is not likely to happen anytime soon, is to be fucking done with 2020. What a bitch of a year, memorable to all for as many reasons as there are people anxious to get it over with. Whether it's the pain of loss, the dream-crushing financial burden of layoffs, student loan debt, illness or just the staggering loss of hope in the face of a post-pandemic world, the ones who cling to that tiny little light at the end of a tunnel, the one that keeps some people going while causing others to quit, have a chance to reach for their dreams.  Pandemic or not, this is still America, a place where if you want something bad enough and you are willing to work your ass off to get it, even if it means sacrifice everything, then, well, just maybe— whether in spite of or just to spite the new normal—there's a slim chance to make a dream come true. It's not a guarantee, just a "chance."

My dream came true in 1976, after my dad died way too young in 1975. Life wasn't about money or success anymore. From that loss I learned there are no guarantees. My life, be it short or long, was going to be all about where I would spend it, not what I would do to survive. My dream was to move to Colorado, Ouray, if possible. I sold most of my "stuff" and put Missouri in the rearview mirror.

Of course here were no jobs in December in Ouray in 1976.  I was forced to settle for "close," as in, Montrose, just a 30 minute drive away from everything that made my life worth living. It took 30 years of hard work to get from Montrose to Ouray, and, in spite of all the changes going on, things that I think are obscene, it was worth every drop of blood, sweat, and tears it took to get here and I don't think we'll ever leave. It's home.

Since "Where" is more important than "what or how," and since I refuse to live in some big city or sterile Nevada-like desert, I think I'll be able to adjust to the changes going on here. Besides, I think every "pretty" place has been discovered and thus doomed to suffer what's going on in Ouray. "Prettiness" is the "kiss of death" these days.

I may bitch from time to time, but I'll stay put in Lovely Ouray. Where else could I go? Where else would outdoor amenities unfold at my doorstep? And while Ouray is no longer "perfect," there are still many hidden places where a determined person can be alone... get in touch with their soul and purpose and "let it be." At the end of a long day I still feel joy. After a long hike I sleep peacefully...in spite of bad news regarding climate change, politics, pandemics, corporate greed, or whatever unsettles your wagon.

Yesterday was a reminder of why "Where" is so important to me. A short drive put us on a series of trails where we didn't see a soul all day. It was an 8.5 mile loop hike through glorious displays of color and views of Ms Autumn's foothill quits on faraway mountains. This, in spite of droughts and doubts.

And when the broken hearted people living in the world agree

There will be an answer, let it be

For though they may be parted, there is still a chance that they will see

There will be an answer, let it be

Shine until tomorrow, let it be

I wake up to the sound of music, Mother Mary comes to me

Speaking words of wisdom, let it be... 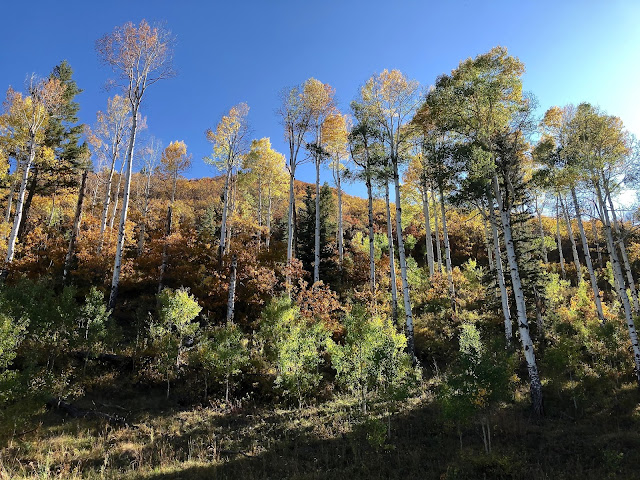 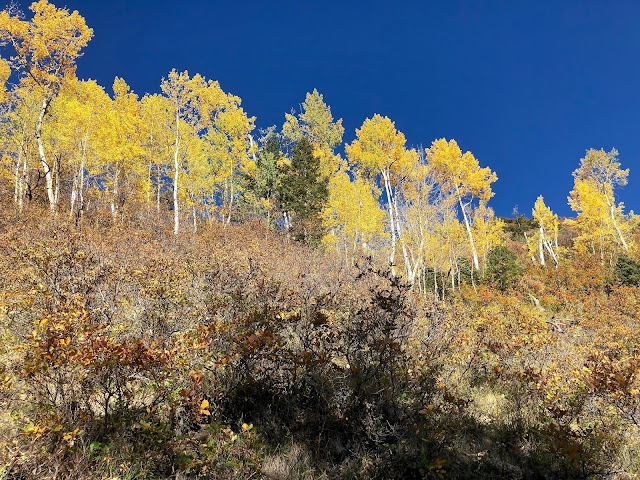 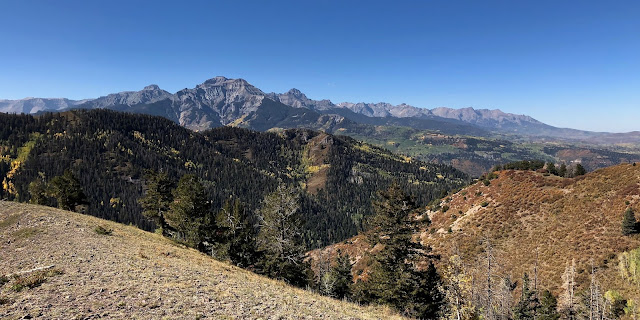 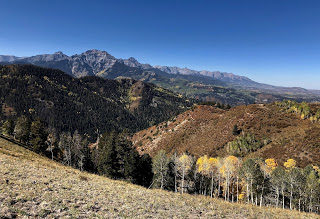 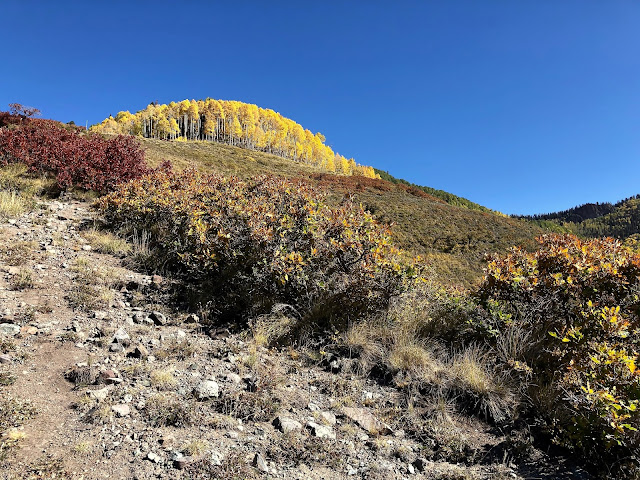 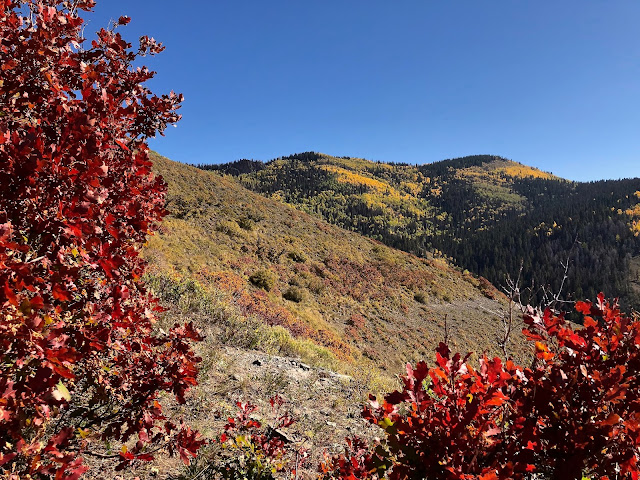 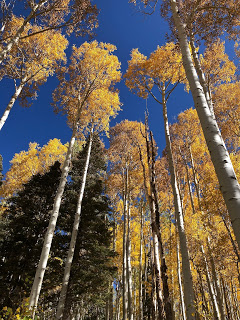 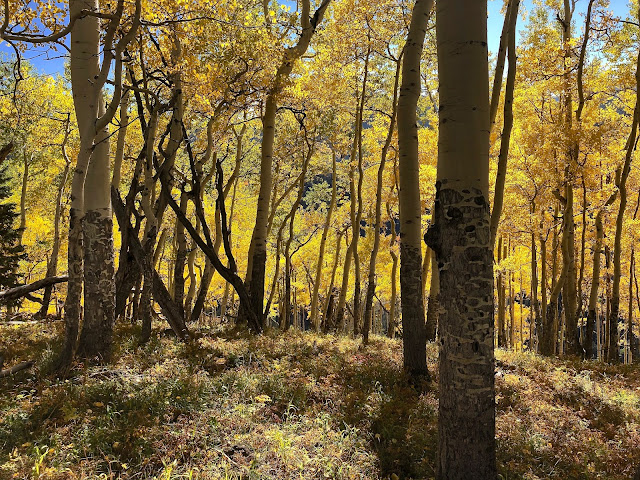 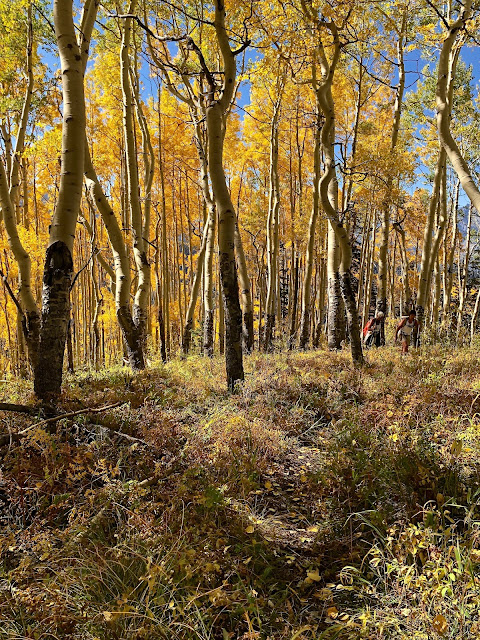 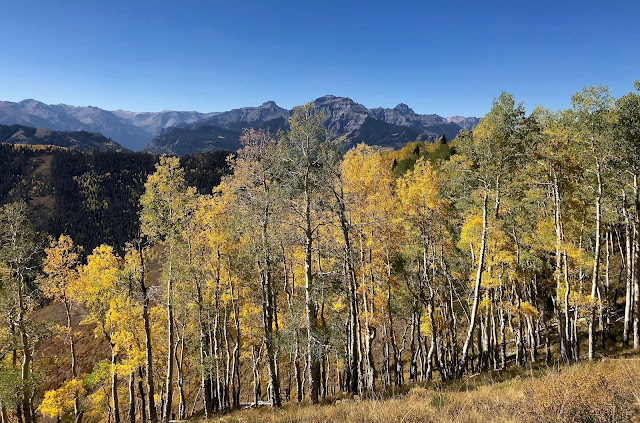 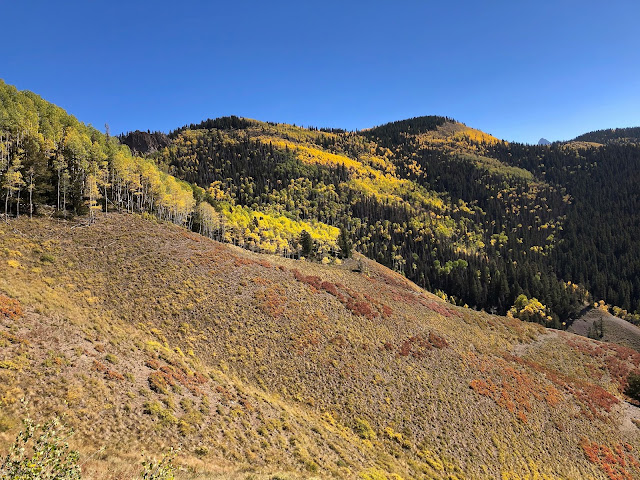 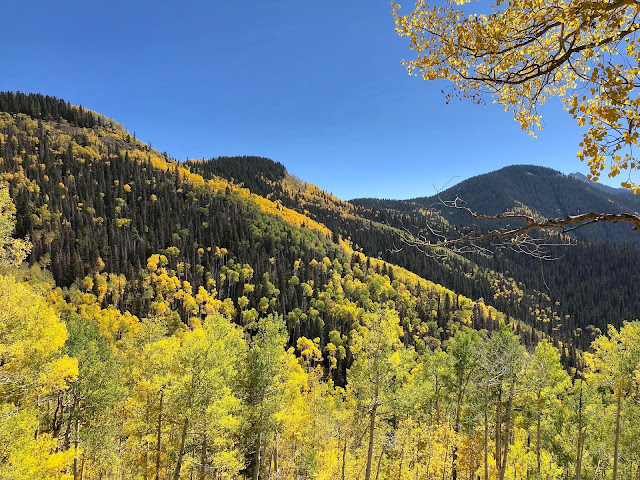 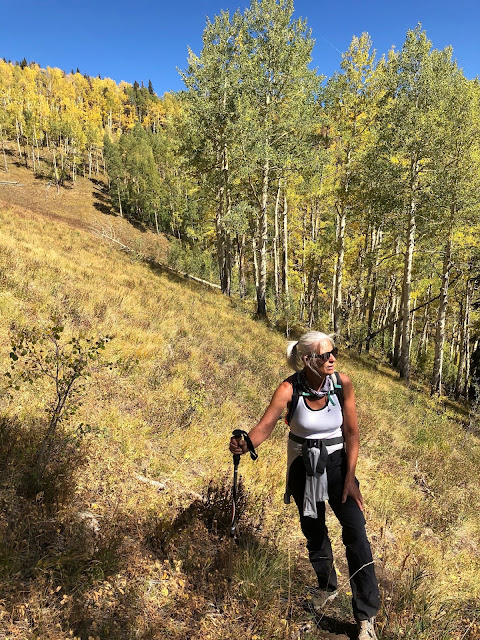 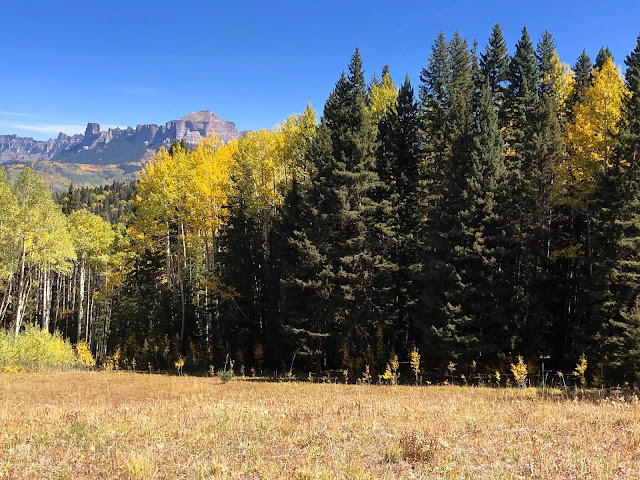 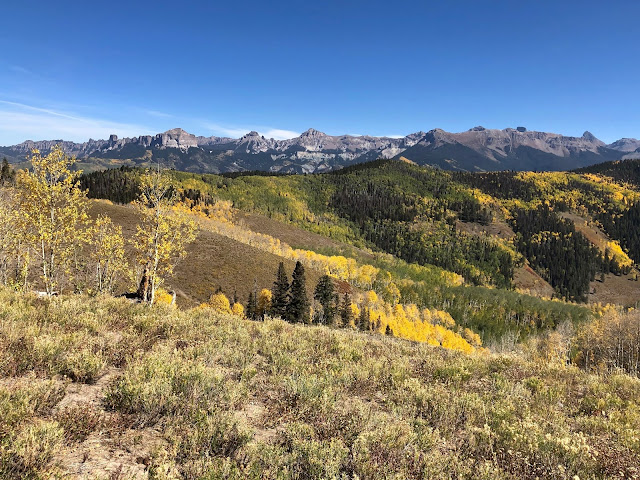 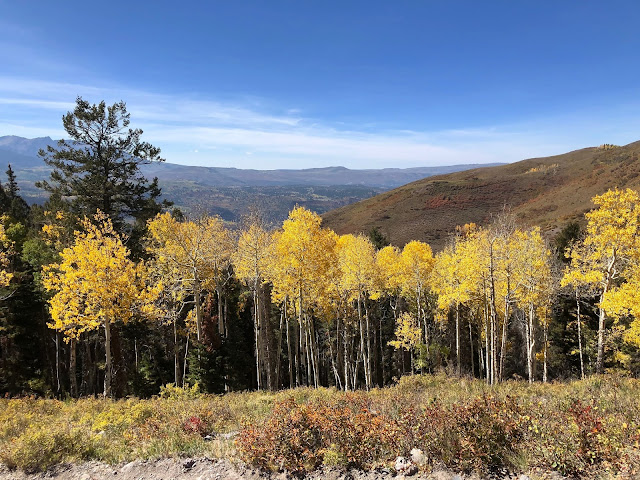 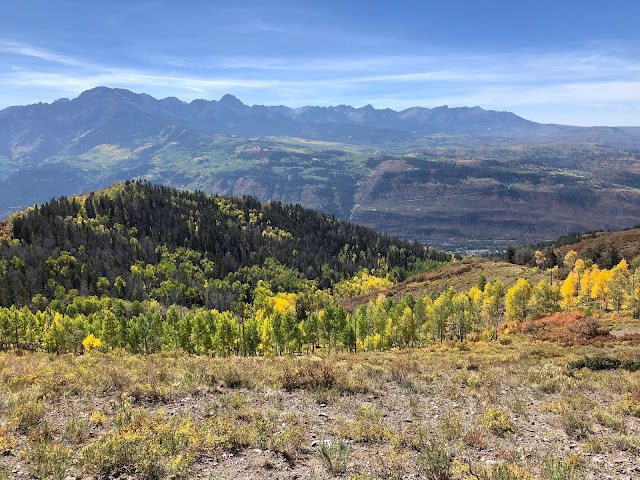 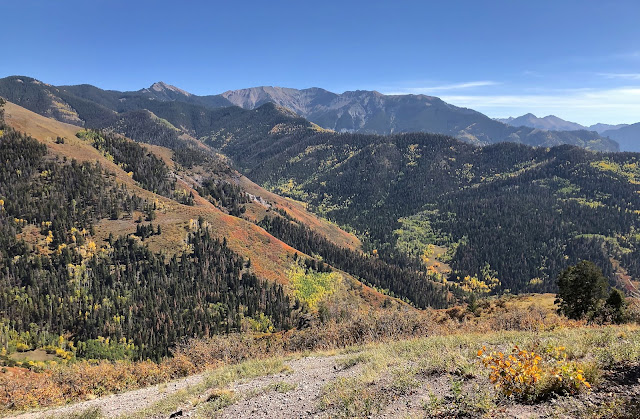 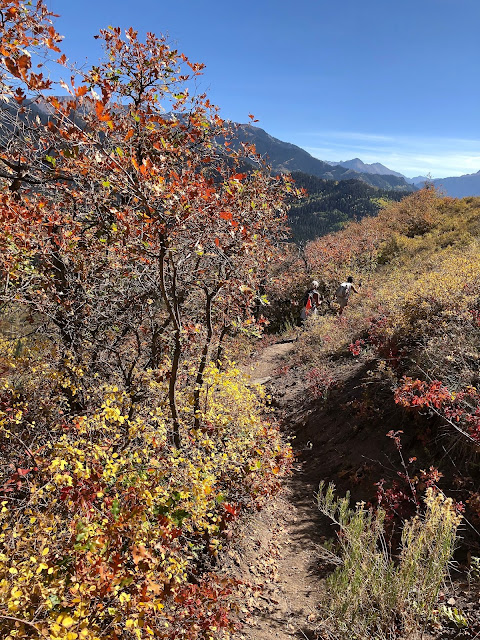 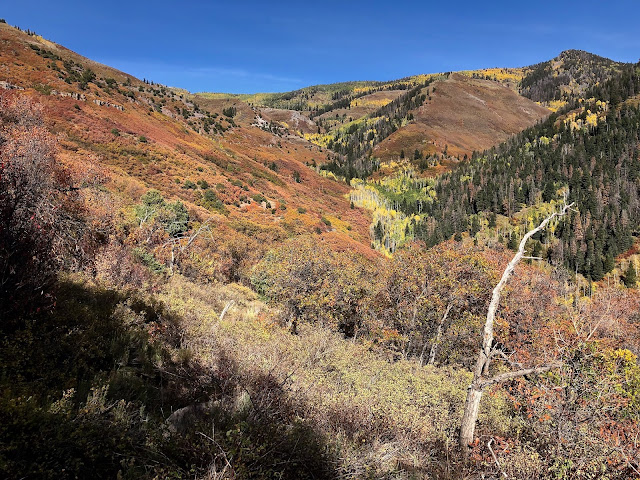 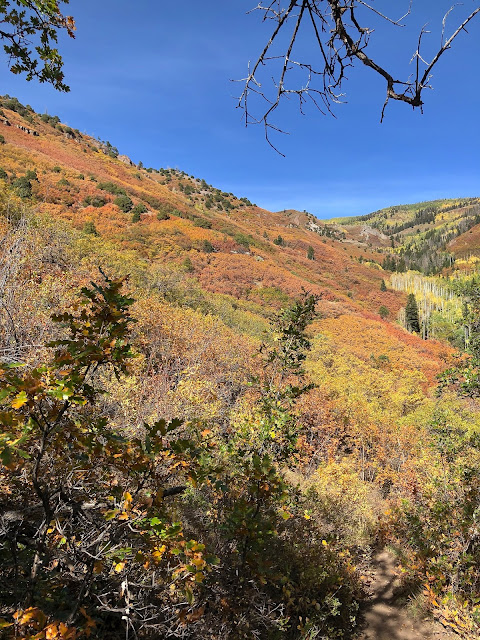 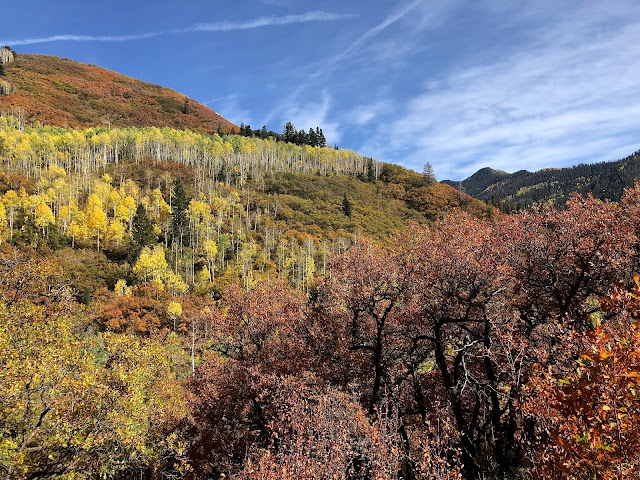 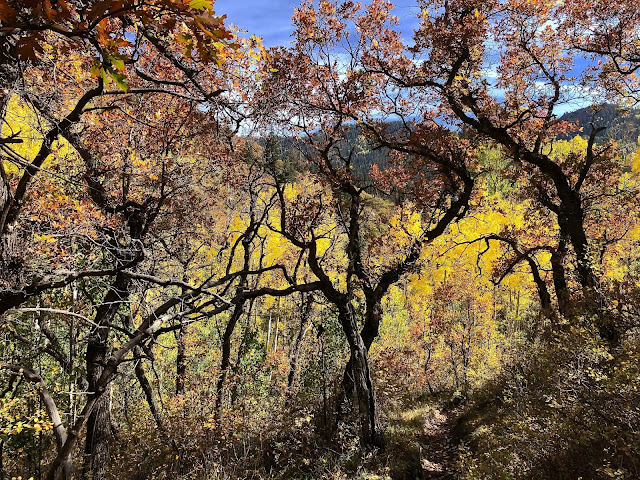