A Long Awaited Rematch With Leon 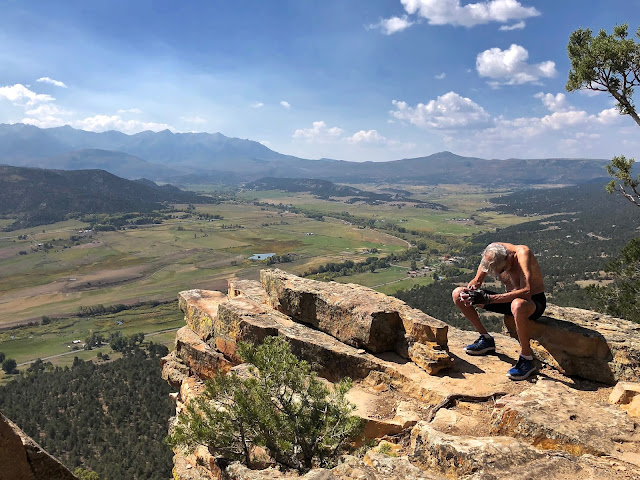 I love my bike. It's there for me when bruised and battered feet grow weary of hiking and climbing...foot-slogging, saddled with a burdensome arch-flattening pack that ofttimes threatens to peel me backwards off some mountain.

This summer I've managed to bump up my riding miles to 50, which, on hot sunny days, feels like a hundred. On those days pushing 85 degrees I leave all out on the trail, barely make it up the stairs.

But soon, with half of a cold beer in hand and the other half in my belly, I deem the effort worthy. It only takes half a beer to both savor and amplify post-ride endorphins surging through my hypothalamus and arteries. In lieu of curing disease, dispelling climate change or fostering world peace, well, at least I feel like I've done something.

Then, somewhere about 3 ounces into a second beer, sleep overwhelms my desiccated body and whisks me off to a snoring slumber. A cool shower wakes me up, but I've been known to drift off again and again till bedtime. It doesn't embarrass me anymore. I'm old enough to have well-earned post-ride naps.

Yesterday I had a man-date with pal Leon, the first one in this fucked up year of 2020. We planned to meet up at Ridgway Town Park, 9:45 a.m.. It was a chilly ride for me to Ridgway, "a nipple raiser," as my granddad Carder—a master at sexually veiled innuendos—used to say. 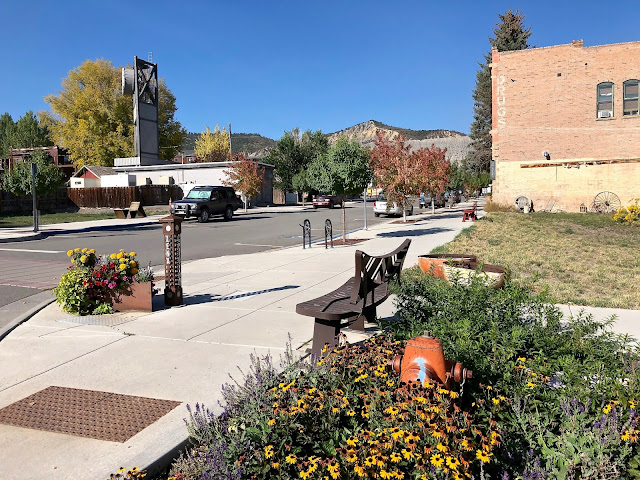 Since I was in charge of logistics, we biked my usual 50 mile backroad loop....30 for Leon as he dislikes the uphill ride from Ridgway back to Ouray when he's tired. Hence, Ridgway for him. Off we go... 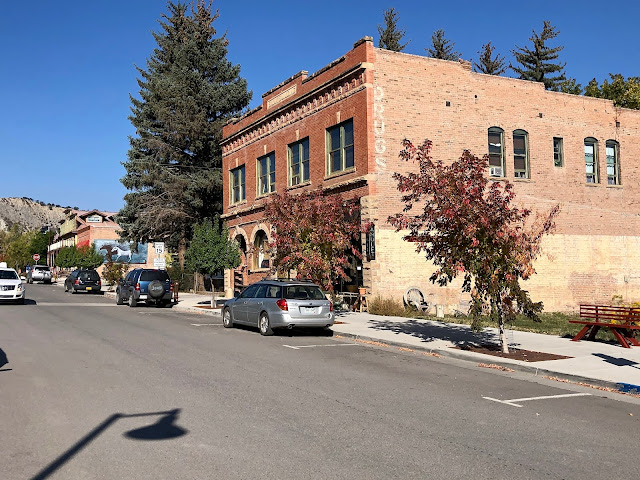 It's an uphill grind right off the bat. In order to make my loop work we must first endure a few miles on pavement up Dallas Divide. Traffic this year has been busier than ever. The usual nuts-to-butts train of trucks and cars headed to Telluride for worker bees has now been joined by a bazillion Rvs...from motorhomes, to fifth wheels, to camping trailers...most of them brand new. Huh, seems all it takes is a pandemic to get people outdoors. So it's a white-knuckle ride initially. Most driver's are in such a wild ass hurry these days...it borders on "road rage." Add that they're distracted, and downright discourteous to anything in their way. I guess they'd rather kill a biker than take their fucking foot off the gas, move over a few inches and share the road. It's why I can't carry a gun, cause I'd end up shooting all the asshole drivers. 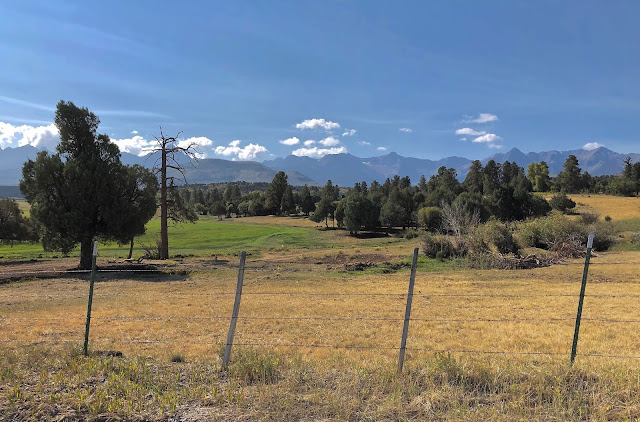 But once off the pavement, ahhhh. Peace and Quiet and beautiful ranch-lands backdropped with sky-piercing mountains. Fall is here, along with it the last cut of hay....all neatly stacked and ready for winter feedings. 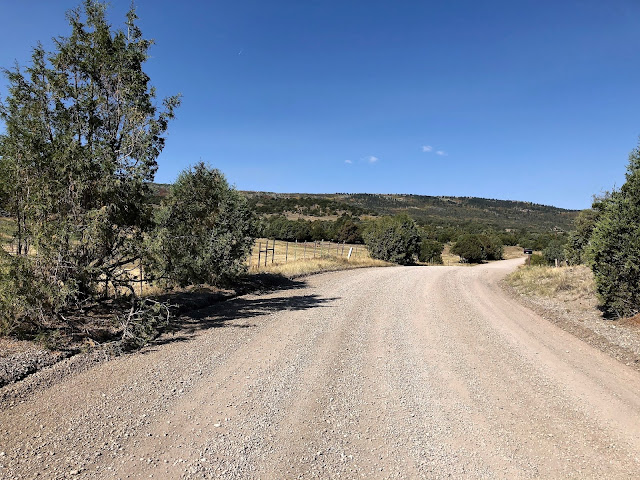 Leon mentioned that we should include a race up Log Hill. It might be our only chance, he says. He's been biking nearly every day, so I see this as a "set up." Oh well, what's another loss to Leon. I can take it. 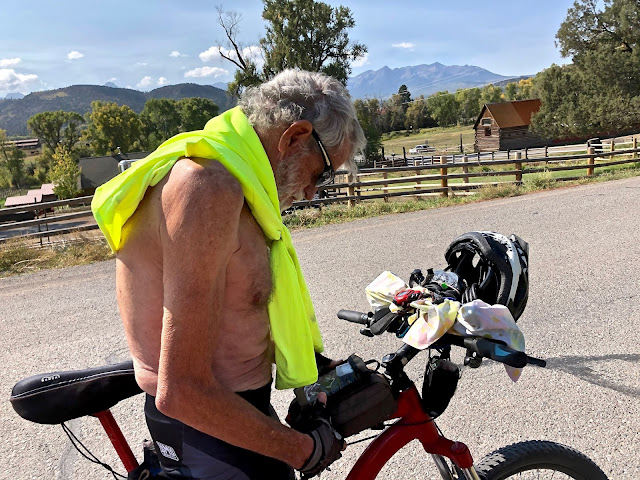 Sure enough, we get around to the switchback road up Log Hill and ole Leon's digging through his bag looking for his stopwatch. He pulls out a little yellow Post-it note with all our Previous Best times and dates. Gads...here we go again. We strip down cause it's already hot, and it's about to get a lot hotter.
Well, I led for about a hundred yards before that scrawny Texan passed me like poop in the road. I couldn't keep up so my race became between me and my stopwatch.
Then, almost at the top, I saw a line of cars and a flagman with a Stop sign. I arrived to find Ole Leon plopped in the flagman's chair, mopping sweat and trying to recover some wind.
"So much for our race," I say. "Does this mean it's a draw?"
At the top we decided to ride on another couple miles and have lunch at Pleasant Valley Overlook. Just like old times... 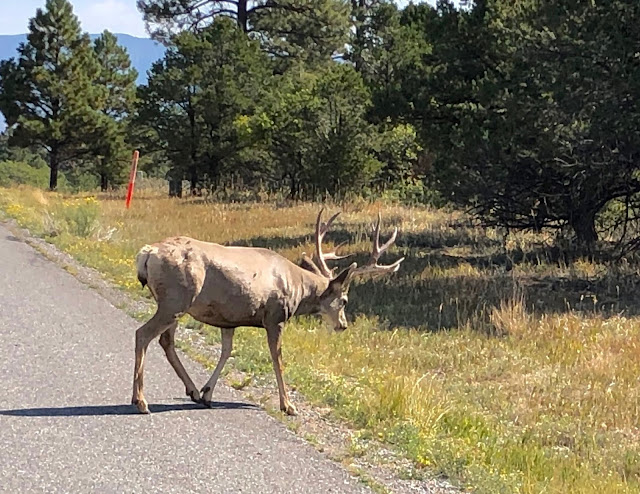 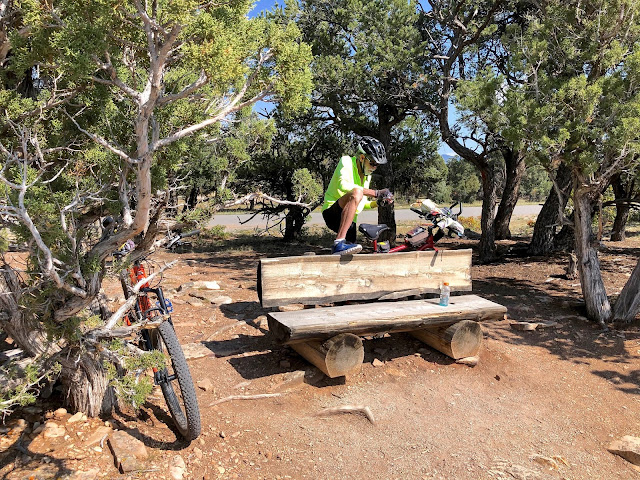 It was a peaceful vista out on the "overlook." Just like always.
We zipped down and continued our ride, chit chatting like a couple old geezers catching up, till my turn off on Owl Creek Pass road. Having thrown in the race up Log Hill, I asked Leon if he was up for this 10 mile segment. But he had his mind on eggs, hash browns and sausages at Kate's in Ridgway, and they closed at 2 p.m.. So we parted ways and agreed to meet at Kate's. With the extra 10 miles up Log Hill and out to Pleasant Valley Overlook, I was staring down the barrel of my first 60 mile ride. Cool! 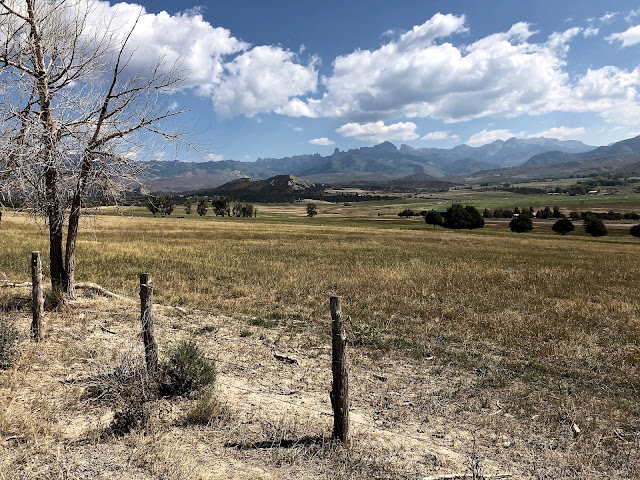 Bonus Photos from a ride Bobbie and I did to Ridgway Reservoir State Park a couple days prior:.. (To get Daisy the Rv out of storage and ready for the road) 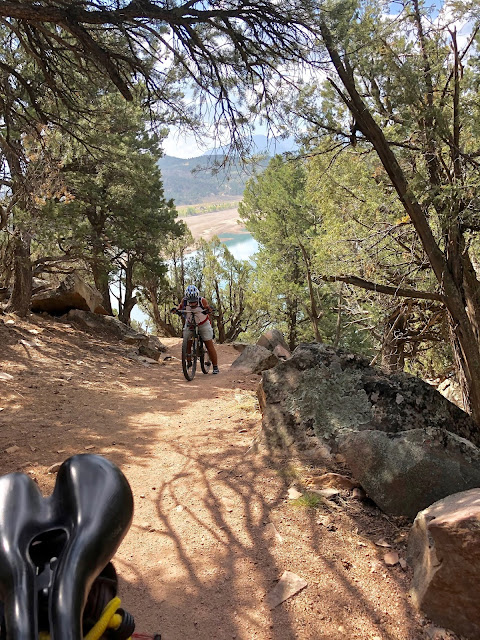 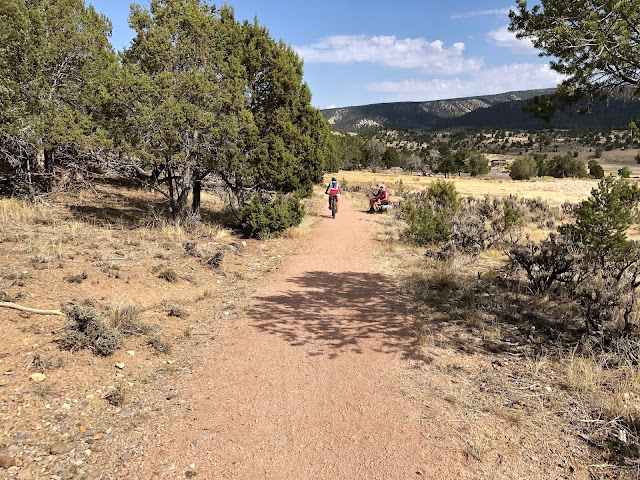 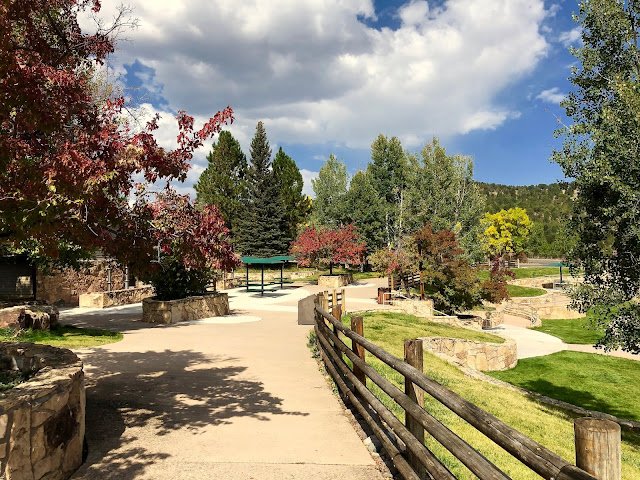 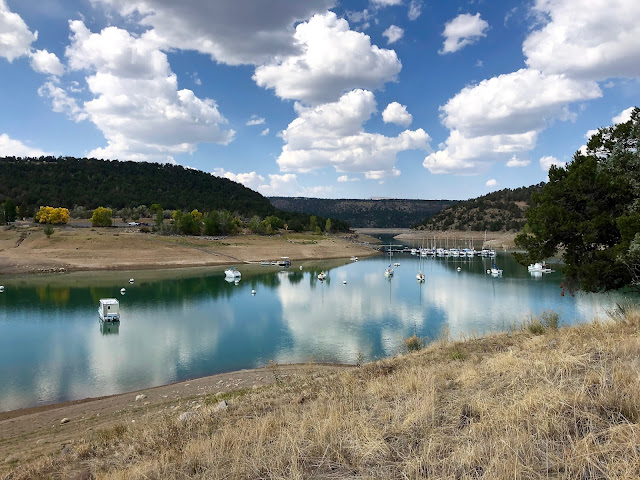 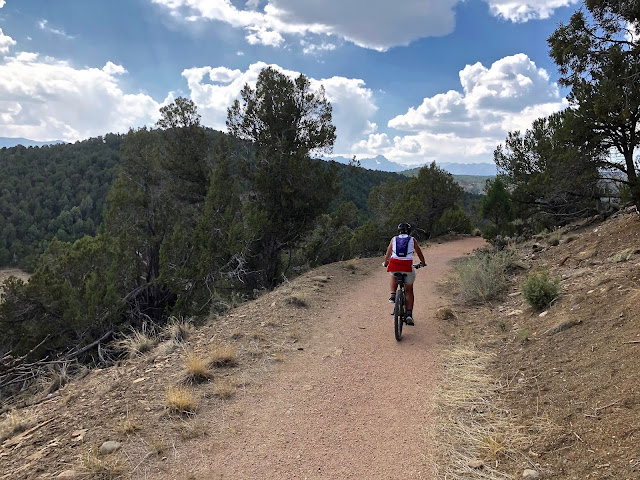 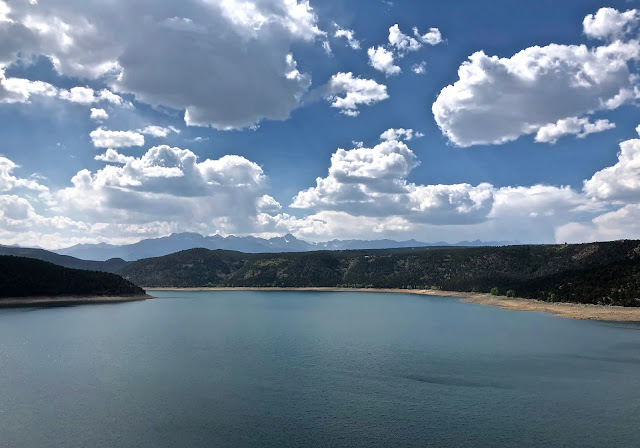 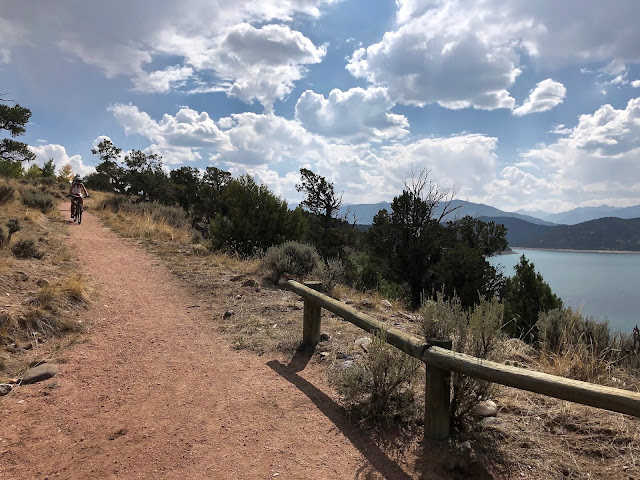 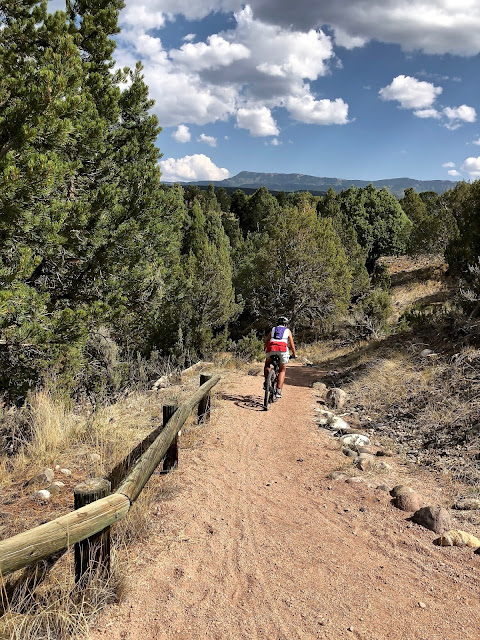 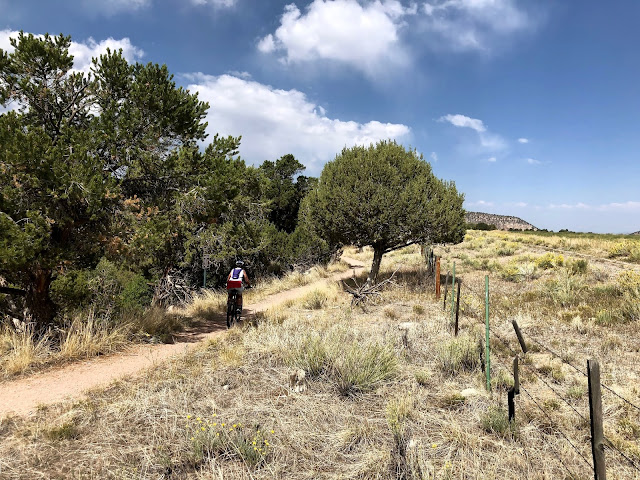 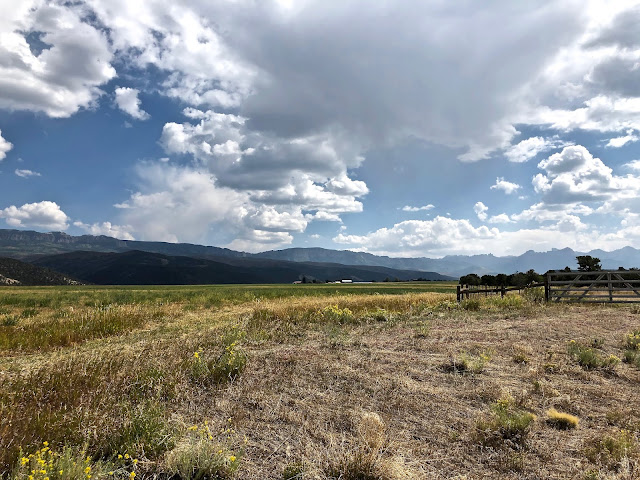 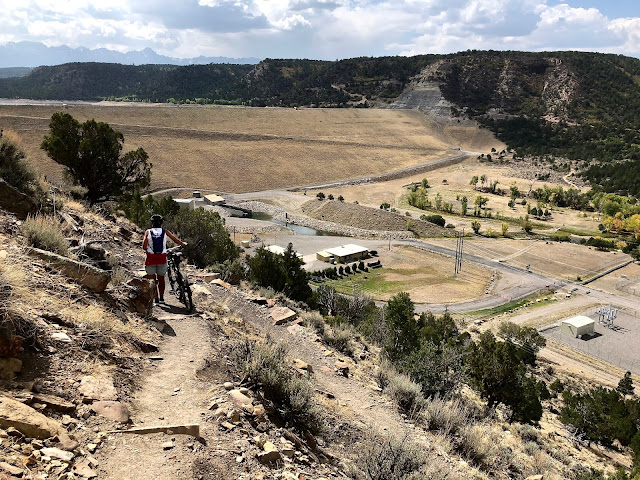 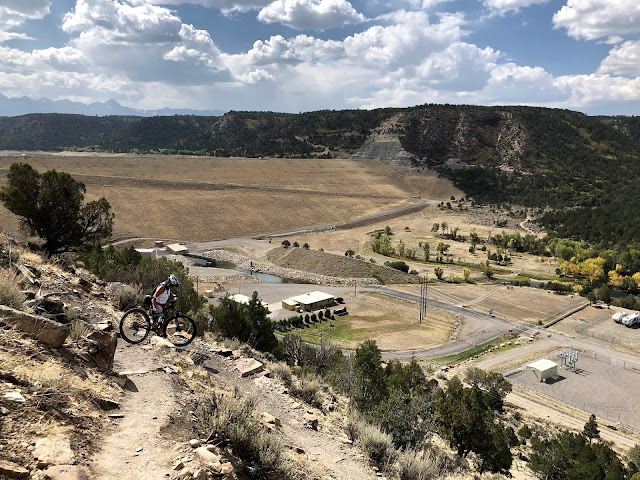 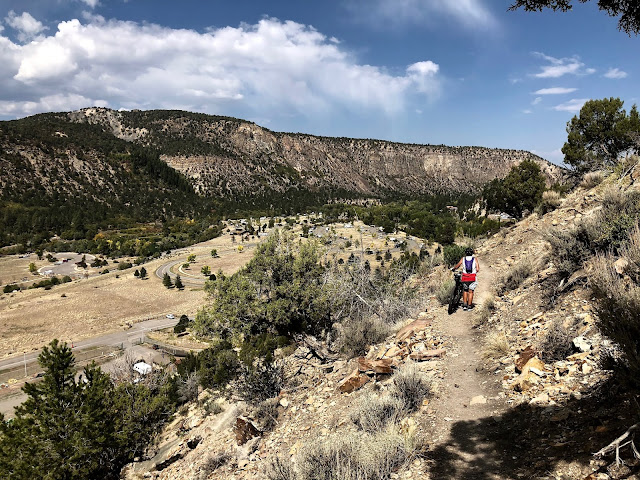