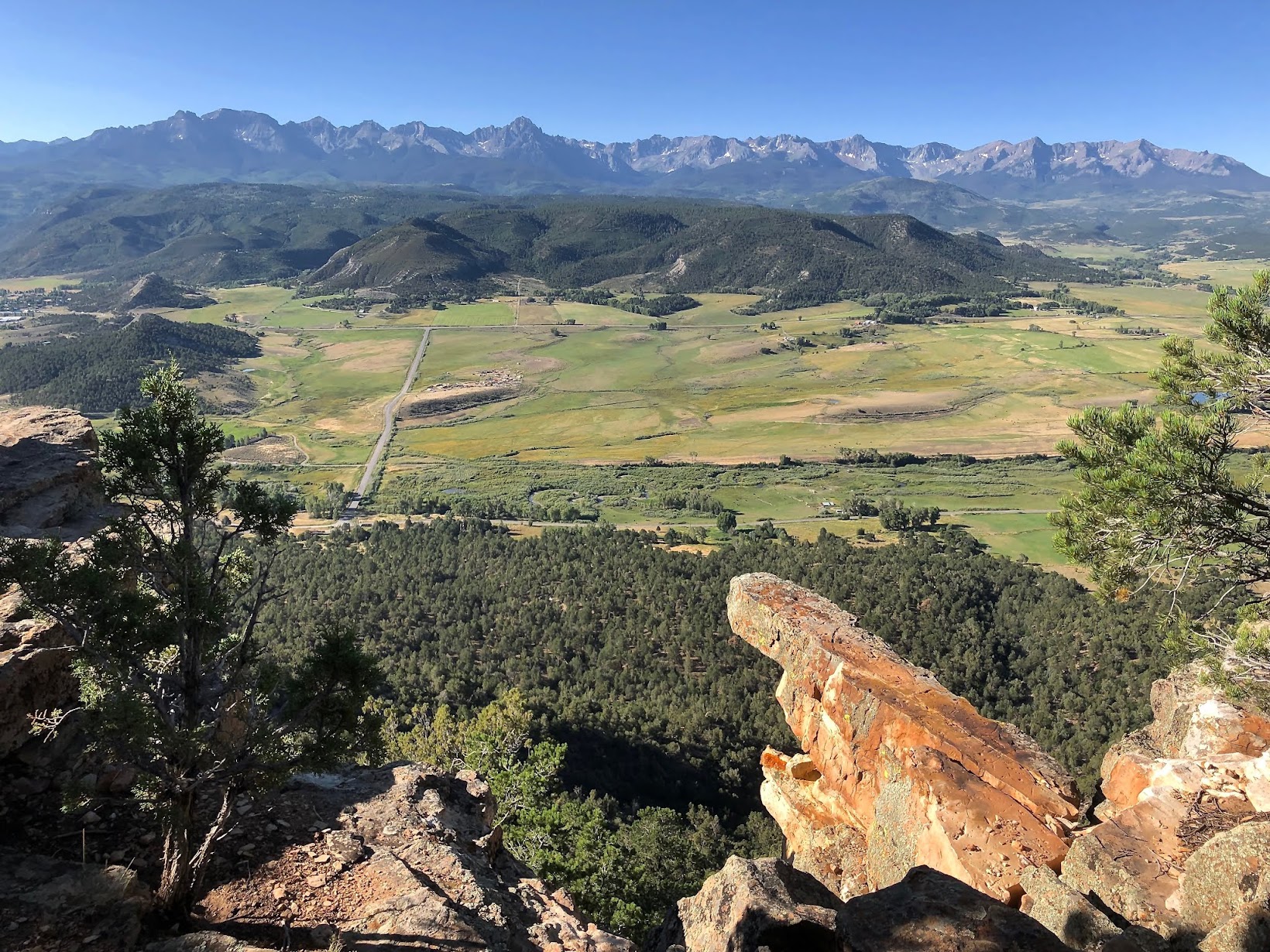 Meaningful experiences are often found near the interface between order and disorder...a point beyond which "outcomes" tend to be more random than predictable.

With each passing day this time of year, we are reminded of Ms Autumn's imminent arrival. While she prepares to wave her magic wand and turn green into gold, we dodge humungous piles of bear scat that now litter Lovely Ouray's streets and alleyways. Dumpsters are being raided, trash cans invaded; it seems you can't go a block without stepping in fly-ridden, seedy mounds of bear poop. Fortunately, our bruins are health-conscious vegetarians...unlike their grizzly third cousin counterparts up north.

As a hiker, biker, outdoor liker, I find this reassuring. It doesn't rule out risk entirely, though, as a surprise encounter with even a vegetarian bear could lead to either a bluff charge or all-out assault. As a last resort, remember to curl up in a ball and play dead, protect your head with arms and hands, then there's little chance you'll become a "meal." Once, I think it was last year on Oak Creek Trail, Bobbie hiked within spitting distance of a massive bear while it was feeding next to the trail. Both surprised, they made eye contact. But, too late to do anything, and given running from a bear is one of the big "no no's, Bobbie simply said, "Oh, hi bear," and kept moving. Yes, we love our vegetarian bears.

Though not as close as Bobbie's, I had a recent encounter with  a mama bear and her cub while on my bike. You see, when a sow has a cub it raises the "stakes" a little. Mama bears tend to be protective of their offspring.

Barely light outside, I was zooming my clunker mountain bike down County Road 17, half asleep at the "wheel."  I was running late for our race up Log Hill in Ridgway with Pal Leon when a couple black specks appeared in the road. 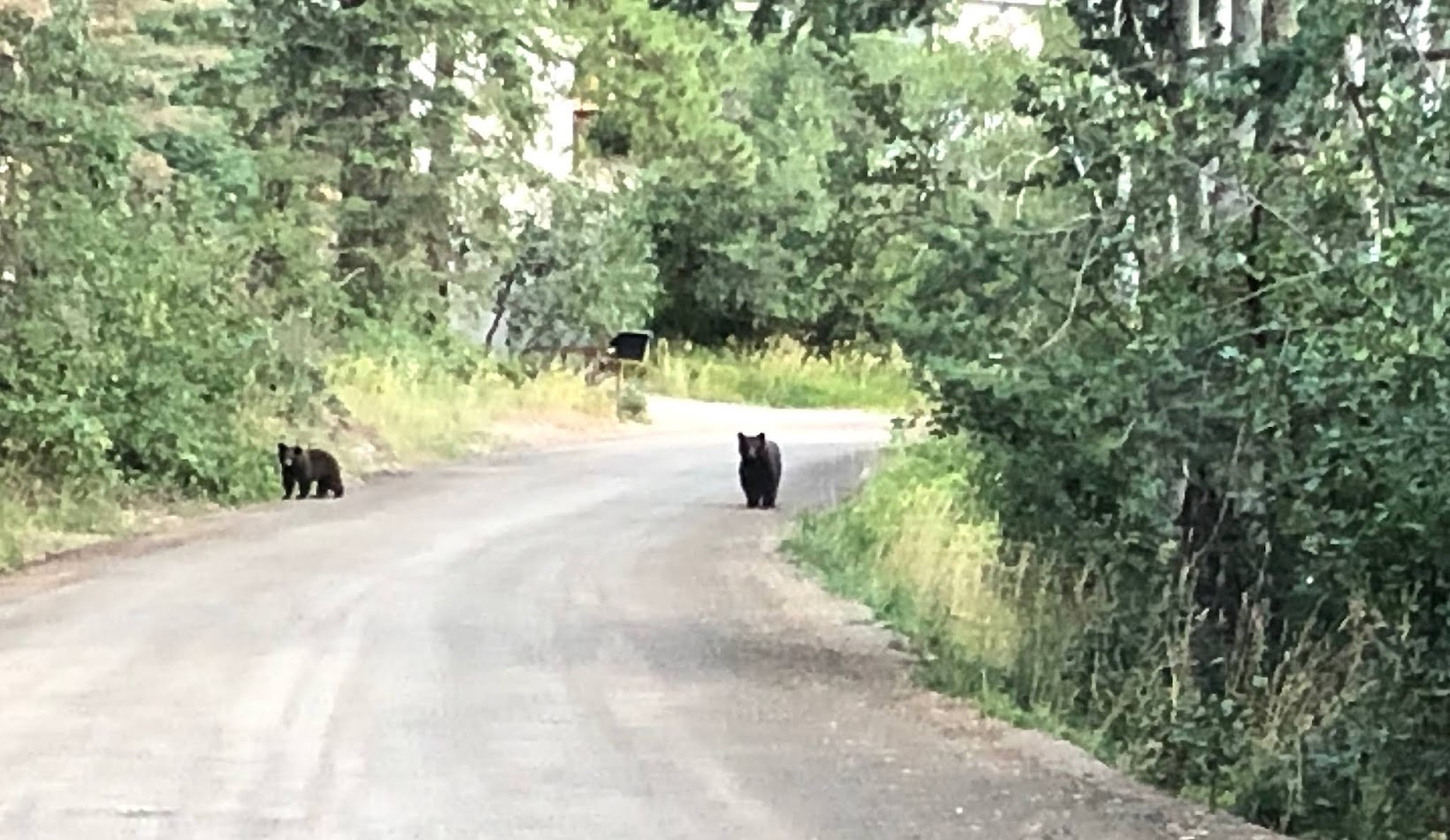 At first I thought it was a couple loose dogs, so I speeded up in case they decided to give chase try to take a chunk out of one of my legs.  Then the proverbial "light bulb" clicked on. Oh, it's a BEAR, and she has a cub. Thank God for disc brakes. Blissfully unaware, evidently, they continued walking toward me.

Maybe it's true, I hoped, maybe they are half blind. Still, I was getting uncomfortable because being in stopped in high gear as I was would make for a pretty slow, likely unsuccessful, getaway.

And they kept coming. I decided to make some noise and coughed a couple times to alert them of my presence. It seemed to work. After starring at me for a few seconds, they ambled off the road into some dense roadside brush.

I waited a minute or so before continuing, then set off slowly, downshifting into "get away" gear just in case. As I pedaled by the spot where they entered the brush, as my luck would have it, there they were...not three feet off the road. Shit!

I think I was pushing close to 30 mph before taking a look-back over my shoulder. Satisfied that I was in the clear, I turned around just in time to dodge a big buck standing in the road. Sorry, no photos of the buck, but I did have time to video the sow and cub...

Needless to say, by the time I reached Leon in Ridgway I was immersed in a post-adrenalin lull, not really feeling jazzed about racing. I related my wildlife encounter as we pedaled the three miles to our "starting line," the white Natural Gas warning post on the shoulder of the road at the base of Log Hill. After popping a Shot Bloc and a taking a big swig of Gatorade, we zeroed out our stopwatches.
Ready?
Yep.
3-2-1-GO!

Leon got a hole-shot on me so I decided to just drop in behind and "draft." I'll make a move later on, I thought.


Ole Leon's been putting in some serious miles on his bike this summer, and it served him well. He left me in the dust, clocking a tad over 18 minutes to the top! Wow. My best time ever is just under 22 minutes, and on this day came in at just under 23 minutes. Nowhere close to Leon (sigh).

I gave him a high five and patted his sweaty back, truly happy for his accomplishment. Given my age...the probable clogged arteries that run in my family, therefore a serious risk of my having a "cardiac event" just to pull off 22 minutes, well, I can't imagine ever reaching the bar Leon just set. I chalked it up as good for my ego...to occasionally be totally humbled by someone better, faster, younger, though, in my defense, not quite as good looking. These days there's always "someone better," right? Too many fit geezers out there. Congrats, Pal, and keep up your current training regime cause it's working.

Leon and I pedaled another couple/three miles to a rocky point that overlooks Pleasant Valley from the top of Log Hill. I let the sun wash over me...cleanse me from all sin and petty jealousies and re-justify my heart and mind. Ahhh. It was the same feeling I got when, as a snot-nosed brat kid, I'd answer Pastor Grosvenor's Alter Call to rededicate my heart to Jesus.

Yep. Just a couple old geezer sunflowers, soaking up a gorgeous day and taking in the San Juans from a rocky prominence on Log Hill...happy to still be alive and competing, win, lose, or draw. 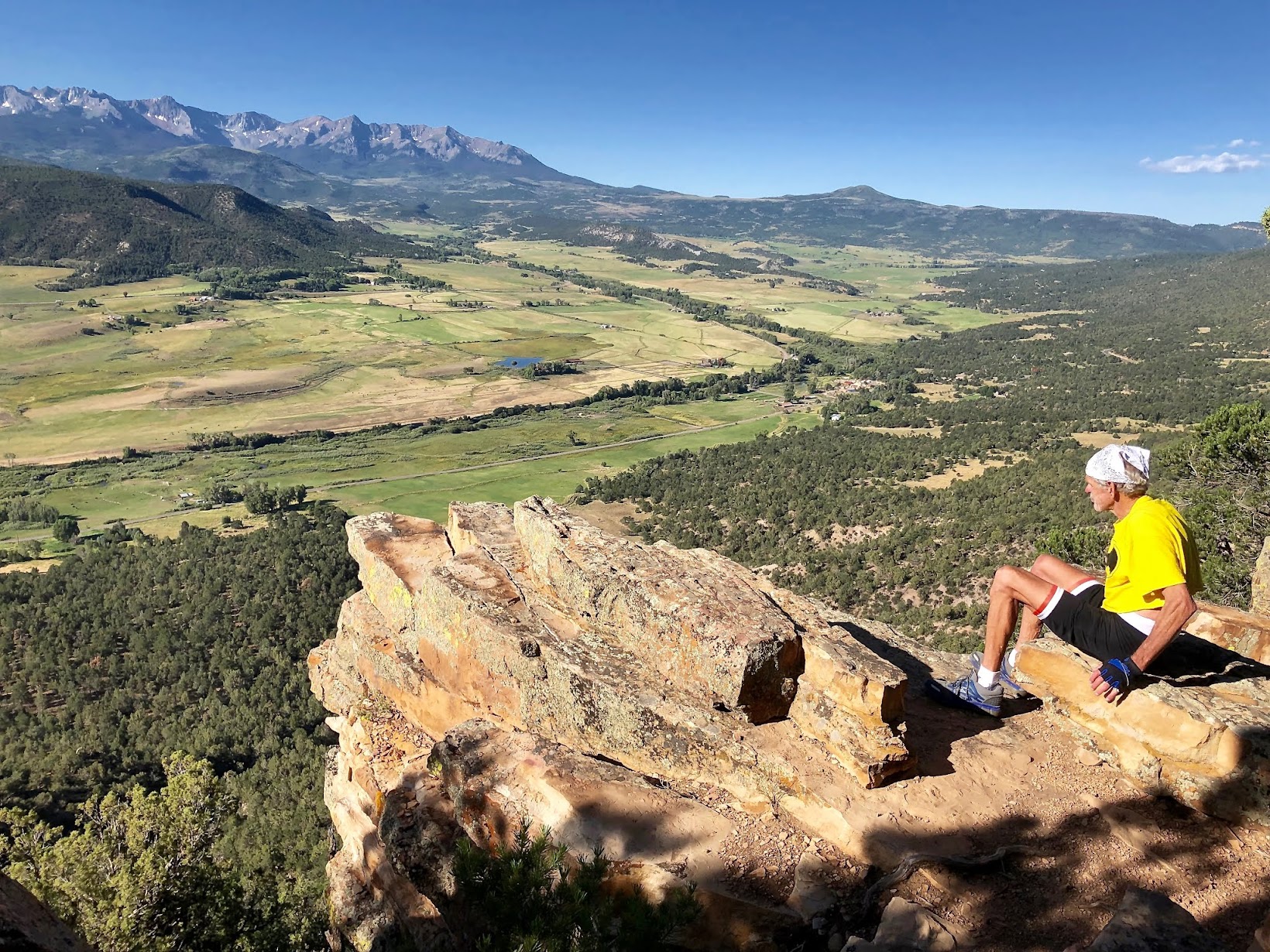 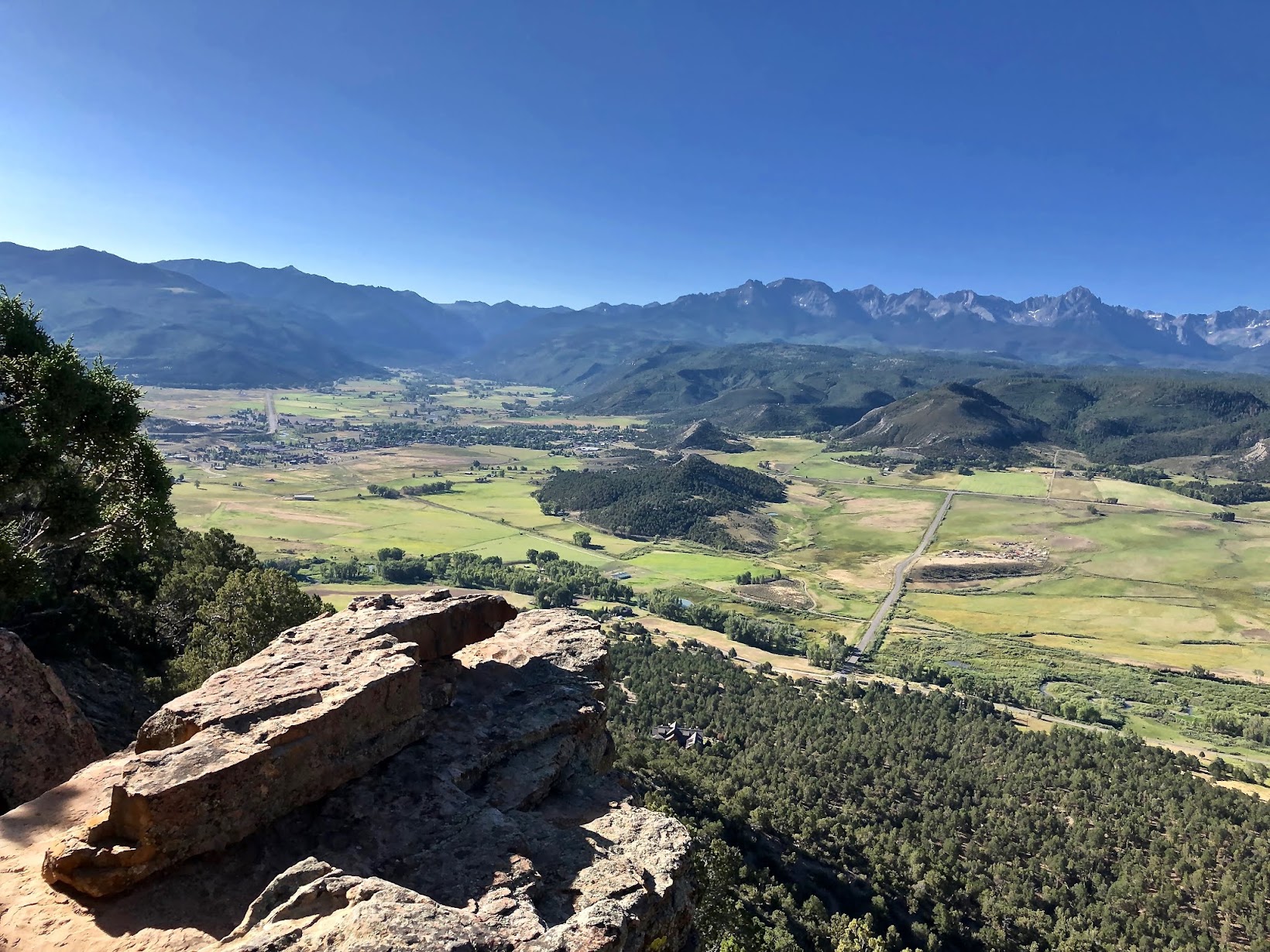 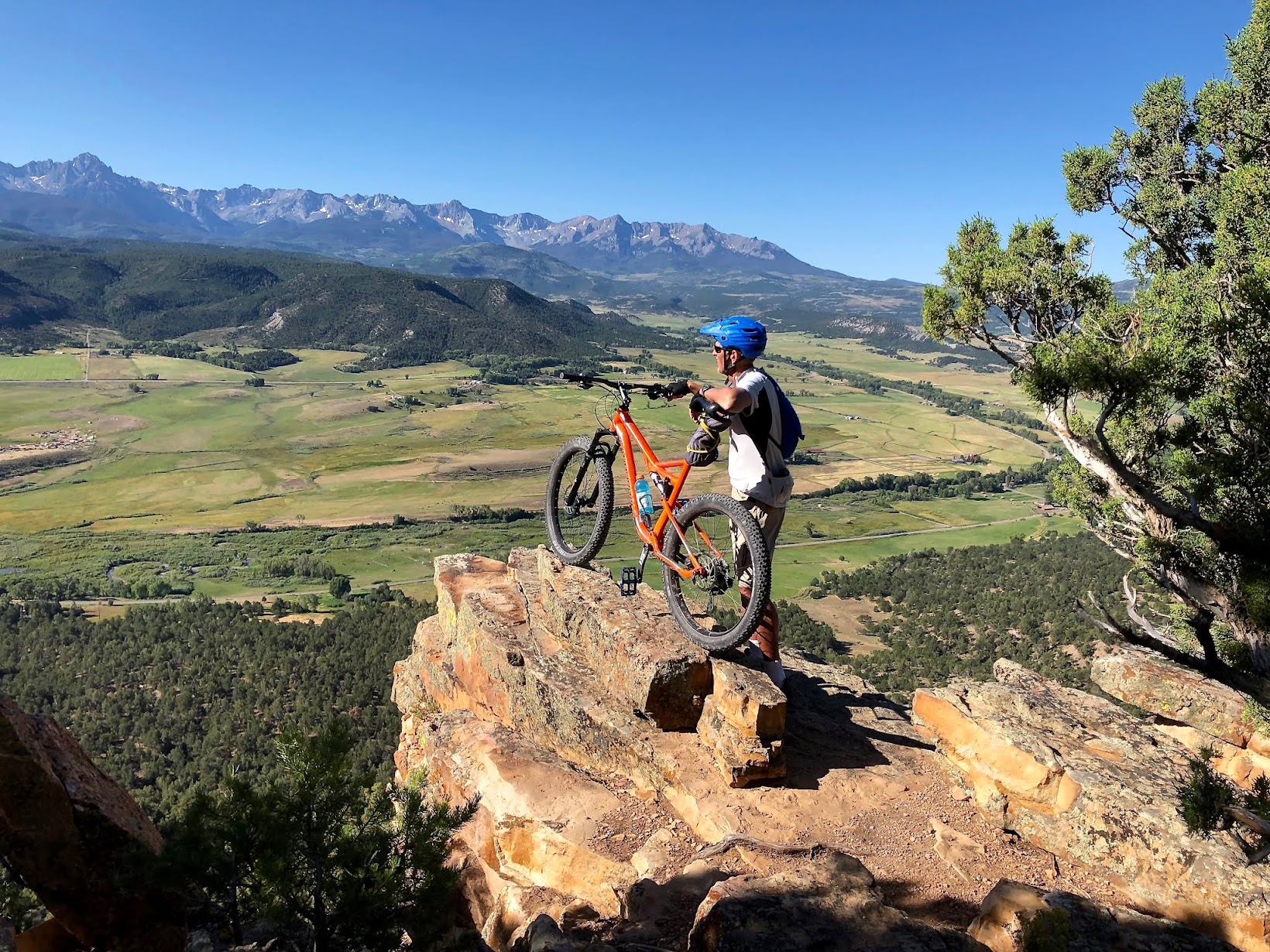 A couple weeks after my bear encounter, Leon and I were scheduled to race up Camp Bird Road again...Runner verses Biker. We both had set PRs the last time so, barring a "really good day," it was unlikely we could top that effort. In fact, we both felt lethargic as we readied at my driveway starting line. Leon even decided to leave his stopwatch behind (fuck it). I thought about following suit but decided, just in case I have a good day, to time my performance or lack thereof. Good, bad or indifferent...I want to know.
3-2-1-GO!

Man O Man...It was cold zooming down my driveway! 39 degrees plus a headwind chill factor. As I leveled out and began the climb through sleepy Ouray, every muscle in my body was throwing a fit of stiffness. The cold seemed to sap my output, which demanded extra effort. Ugh...

Thus the initial climb beyond the first bridge was excruciating. Halfway up I was this close to bailing. I tried letting my mind wander to more pleasant and positive things...like our upcoming fall sojourn to Utah's glowing red rocks. Nothing worked. Nothing eased the pain.

I'm told it's always darkest just before the dawn. Yeah, and colder, too. About halfway to Camp Bird Mine I'm still thinking of bailing. On the steep parts I'm barely moving fast enough to stay upright. I found myself doubting I could even make it to Camp fucking Bird.

Then, as the "last straw" was about to snap, a little "miracle" stopped me in my tracks.

There, right in front of me, was a beautiful fox sitting pretty as you please on the edge of the road. Though still half dark, I took a photo. Then I remembered to switch to video, which better compensates for low light.


Check out this LINK to the short video. It better shows our little face to face confrontation, as well as the fox's colorful markings.

Since Bobbie off hiking with a gal-pal, Leon didn't have a lift back to Ouray. He was okay running the whole thing, about 12 miles total. It probably explains his uncharacteristic slower time to Camp Bird: 1 hour, 26 minutes. He didn't join me in pushing on up to Yankee Boy Basin, either...which made a one-way total of 9 miles with 3,500 feet of elevation gain. Lazy guy.

After agreeing to meet for pizza and beer at Colorado Boy, we parted ways...Leon down, me up, up, up. Strangely, I caught a second wind. I rejoiced at not giving in to the nagging impulse to bail, and for Mr Fox who gave my sagging motivation a boost. Sometimes pushing on is a matter of mind over muscle...along with the right mix of fuel, of course.

On the way down, on a cliffside section where Camp Bird Road narrows to single lane, I came upon a considerable splatter of rockfall that was not there on my way up. Good thing, cause I don't wear my helmet on the way up (heat).

I don't profess to know much of anything for sure. But when push comes to shove, I normally take a somewhat fatalistic point of life-view...that whatever happens happens and there ain't nothing I can do to change my fortune, be it good or bad.

Then something comes along and challenges that precept. Perhaps the delay provided by Mr Fox made the difference between, who knows, life and death, or at minimum a brain bleed, had those rocks came down as I slowly pedaled up.
Naw. Life is as random as lightning. Both Heaven and Hell exist right here on earth, ain't no amount of good deeds or bad allows us choose one over the other. If anything, evil prospers and the good die young (miss you Dad).

Just my thoughts from random days in Paradise, thanking Lucky Charms and distant stars for still being here.
Peace Out,
mark
Posted by Box Canyon Blog.com at 11:55 AM