A Hike We Never Tire Of Repeating 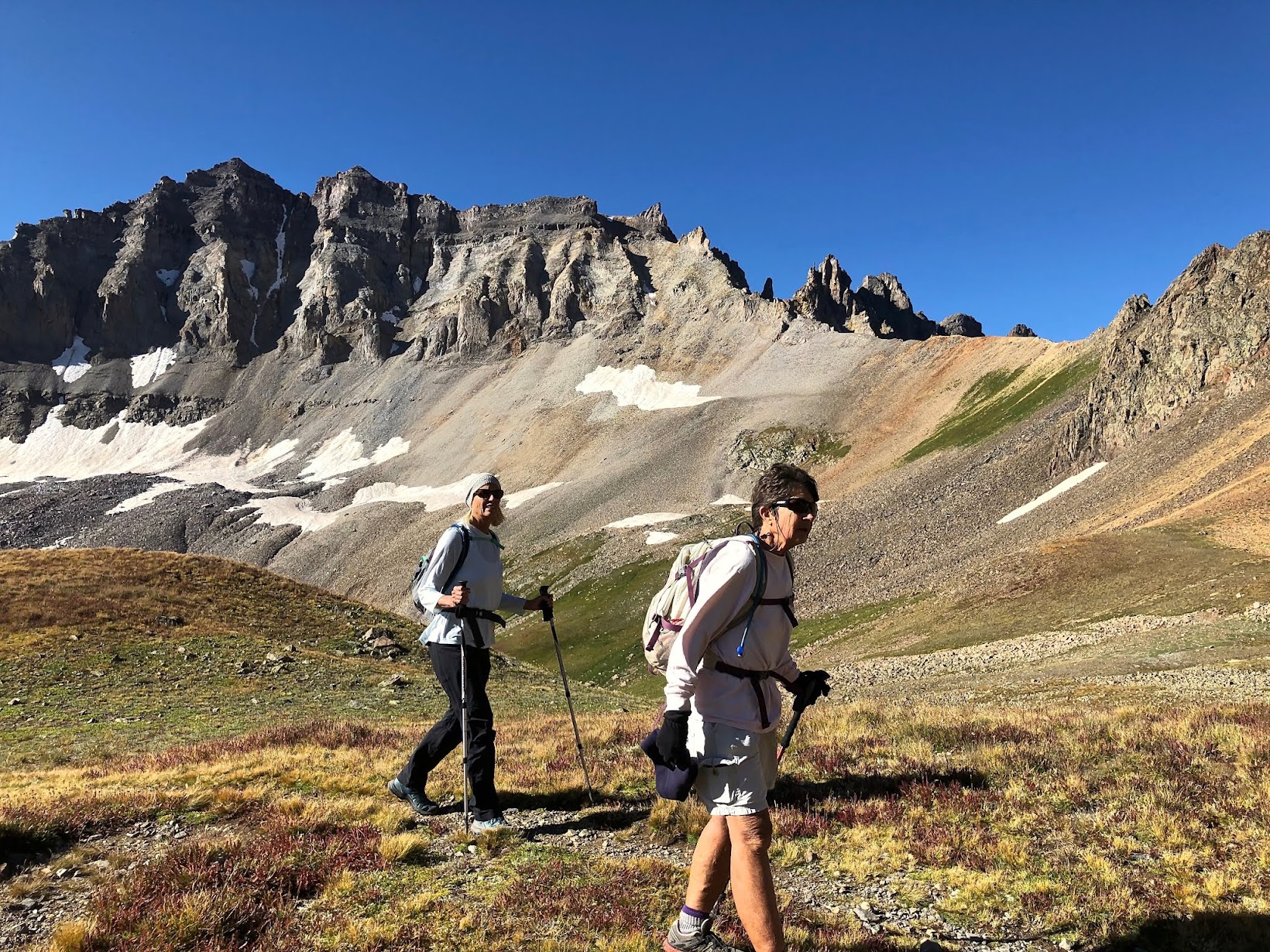 The march of time is more acute when one season slips to another, be it spring's lush chlorophyl awakening, summer's fade from green to gold, or Ms Autumn's palette, decaying under winter's first blanket of snow. Seasons come and go in a blur...the onslaught of time marches on.

Bobbie had a hike planned with friend/coworker, Ruthie. Having been jilted for our scheduled "Man verses Bike" race up Camp Bird Road by Pal Leon, what was I to do? So I crashed the girl/hike to Blue Lakes Pass. 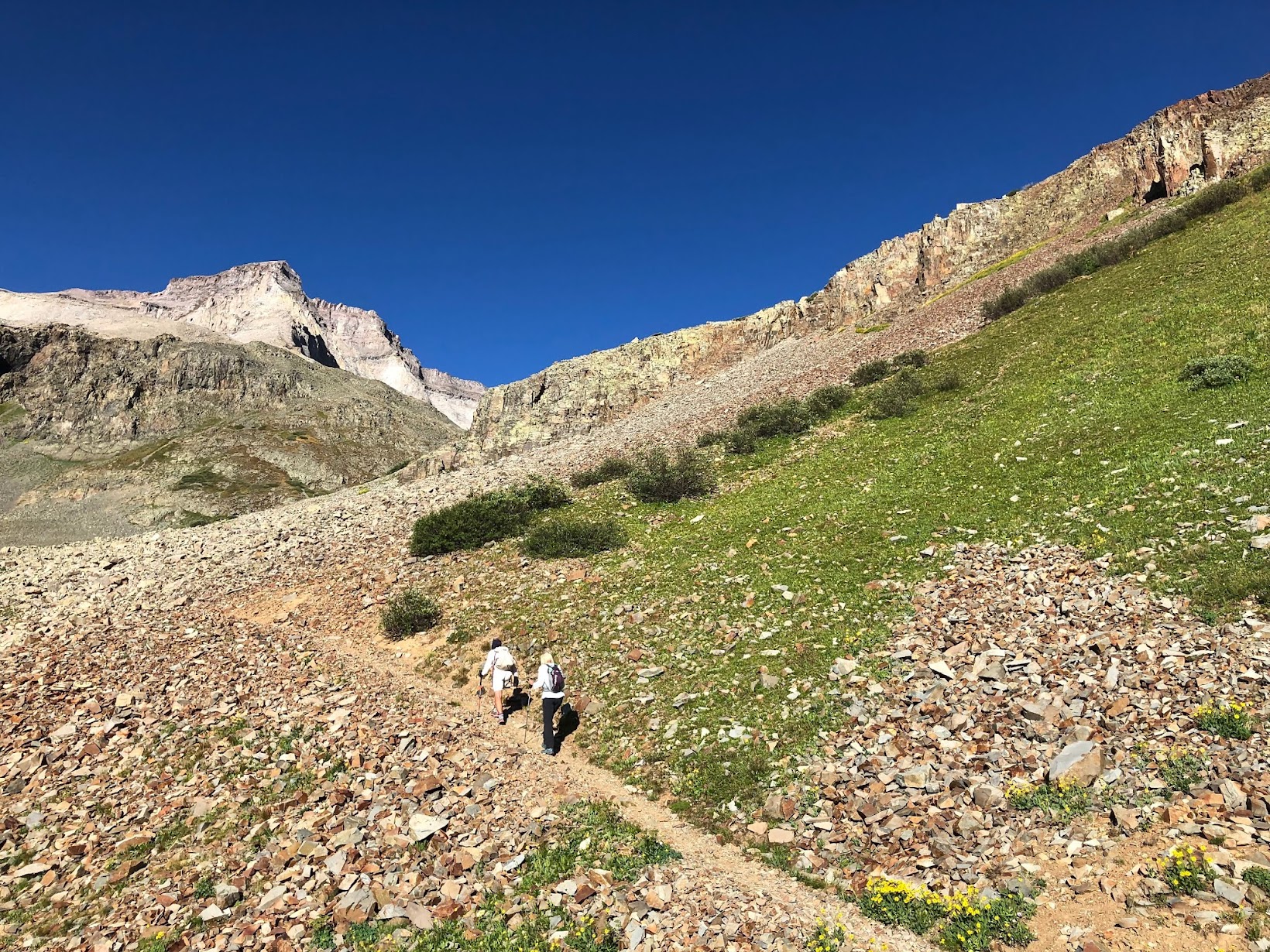 We set off at 7:30 AM, which is early these days here in La Crevice (Oh sun, how I miss thee). Not sure of road conditions up high, I chose Petroeous Rex for its additional ground clearance over Sue Bee. Besides, this Sue Bee has to last us the rest of our lives (sigh). Still cast in shadow, the Camp Bird canyon felt cold and gloomy. Again, I feel a sense of time slipping away...the sun's waning arc growing low and lazy, daylight willingly yielding to melancholy darkness, especially in La Crevice. 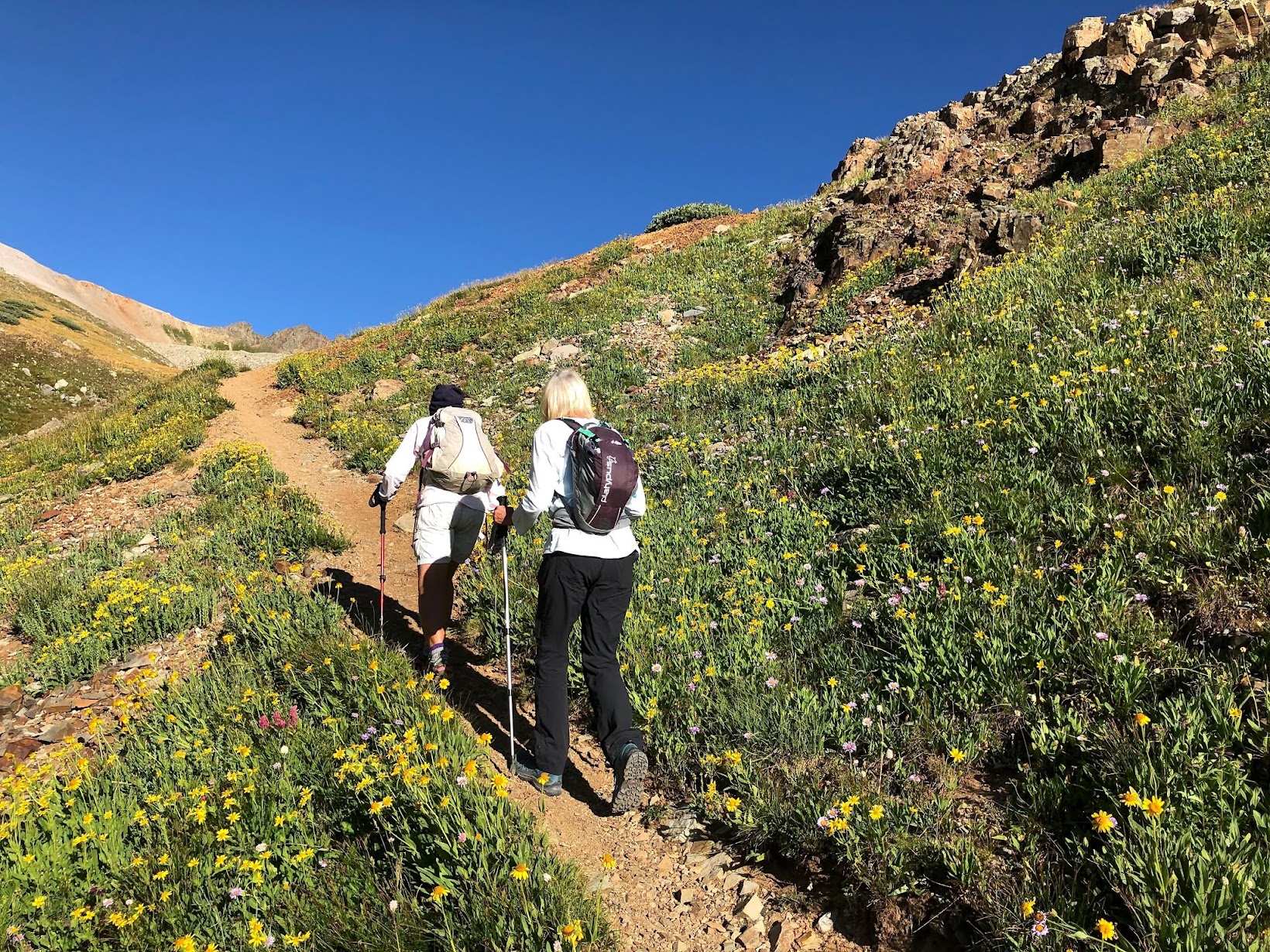 Pet Rex labored up Camp Bird Road to the mine, where I hung a couple of rights on lesser roads to Yankee Boy Basin. Still half asleep, I was relieved to not be grinding a relentless grade on my bike, with Leon breathing down my sore ass.

We found sun waiting for us a mile or so above Yankee Boy. Oh what a difference it made, even with hints of fall in the air and on the ground. Ice decorated puddle rims, frost clung to golden tundra and flowers going to seed, while a brisk morning breeze chilled through our lightweight summer attire. We discussed breaking out another layer, then decided to allow the steep grade a chance to warm our thin blood. 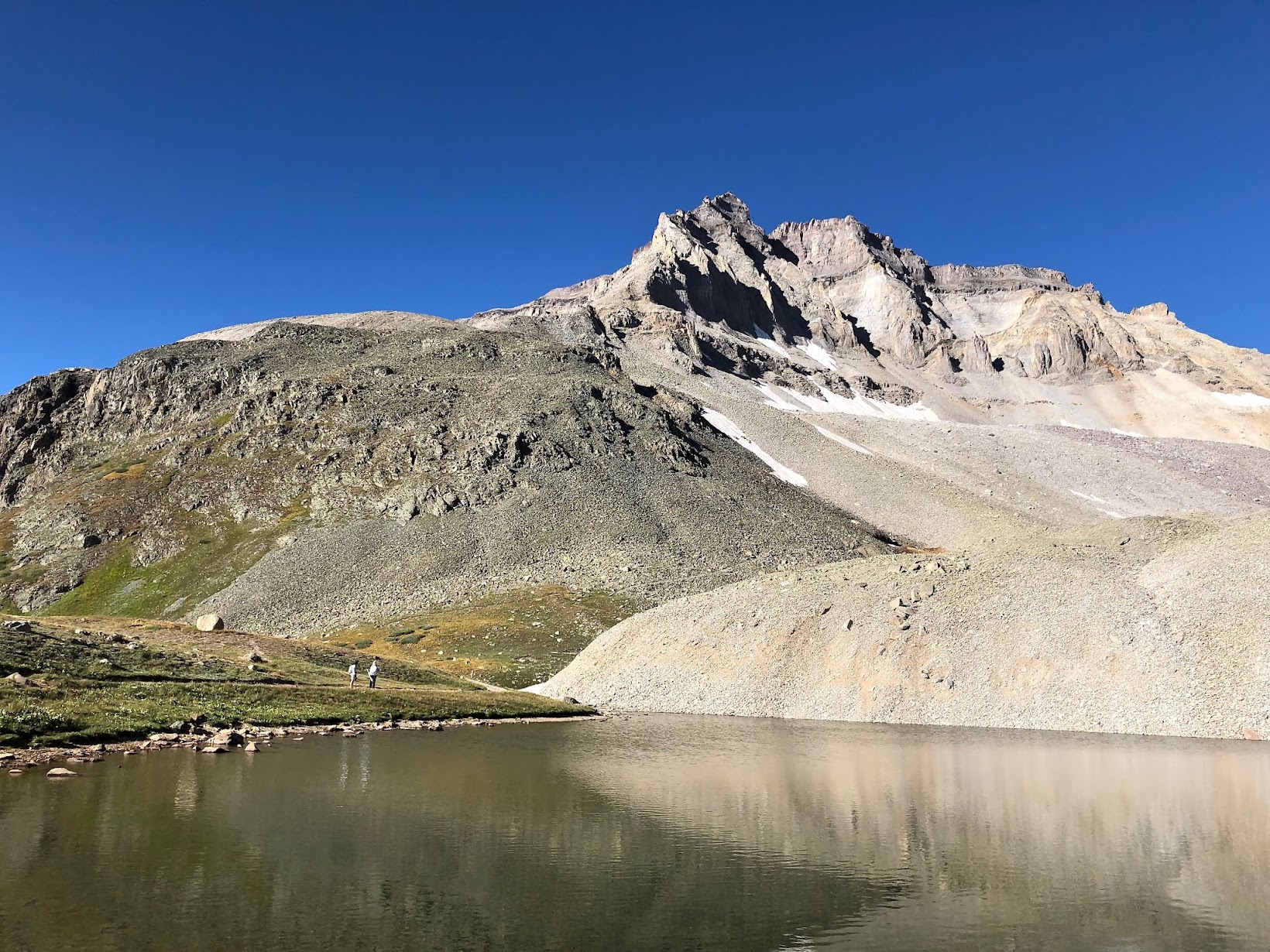 Ruthie needed to be back for her 2 PM work shift, thus our early start. So Bobbie chose Blue Lakes Pass, a convenient alternative hike when in need of a shorter outing. At 13,000 feet, Blue Lakes Trail offers a stunning upslope perspective of our "backyard" 14er, Mount Sneffels, with its jagged spires bleeding iron. It was an easy choice, especially considering Ruthie had yet to "check that box." 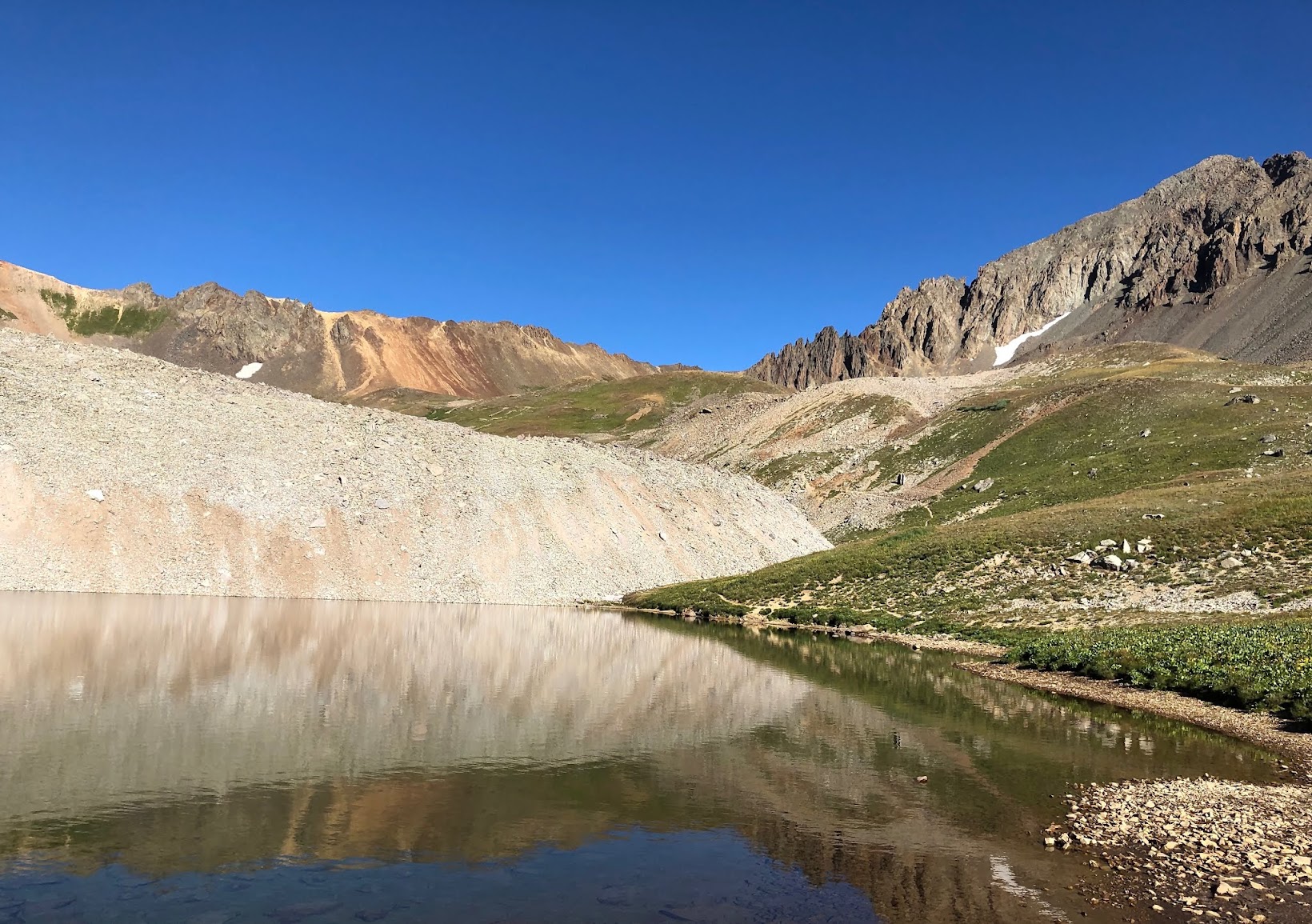 We ascended at a brisk pace, reaching Wright's Lake warmer for the effort. The lake's surface reflected a rusted and ragged mountain horizon, capped by a neon blue dome.

Snow is all but gone this time of year in upper Yankee Boy, with spring and summer's gushing creeks reduced to mere dribbles. From Wright's Lake on, the rust-colored gap below Mount Sneffels served as lure. Still, I can't hike near Sneffels without being tempted. What a perfect day to summit! But the vertical mile that stood between us and the top is a slow bitch. I kept my mouth shut. It wasn't my party...


All of 13,700 feet, Gilpin's ravishing reflection in Wright's Lake seemed to double its size. Below, a vast moraine of shed rock hung motionless. As with glaciers under the constant tug of gravity, moraines, too, "creep" and "calve," albeit at imperceptible rates.


The final trail-leg to Blue Lakes Pass is, in places, off-camber and slick with marbles-on-hardpack. We spied an elderly gentleman ahead of us who was on all-fours...literally crawling on hands and knees. Our hiking poles proved handy, though, and we were able to stay upright. But kudos to the gentleman's mountain spirit. He never gave up and made the pass.


We've seldom stood on Blue Lakes Pass without a maelstrom gale whistling through its vortex gap. This day would be no different. Second layers were pulled from packs so we could enjoy the grand view we worked so hard for.

It's such a colorful and ragged range of mountains that soar above Blue Lakes. Gilpin's rockfall splits the separating ridge, and forms an even bigger moraine in Blue Lakes Basin. It ripples like gooey cake batter, slowly filling the uppermost lake. If not for wind, I could peer down for hours...watching shadows creep and waiting to see the glacier of rock "calve.". 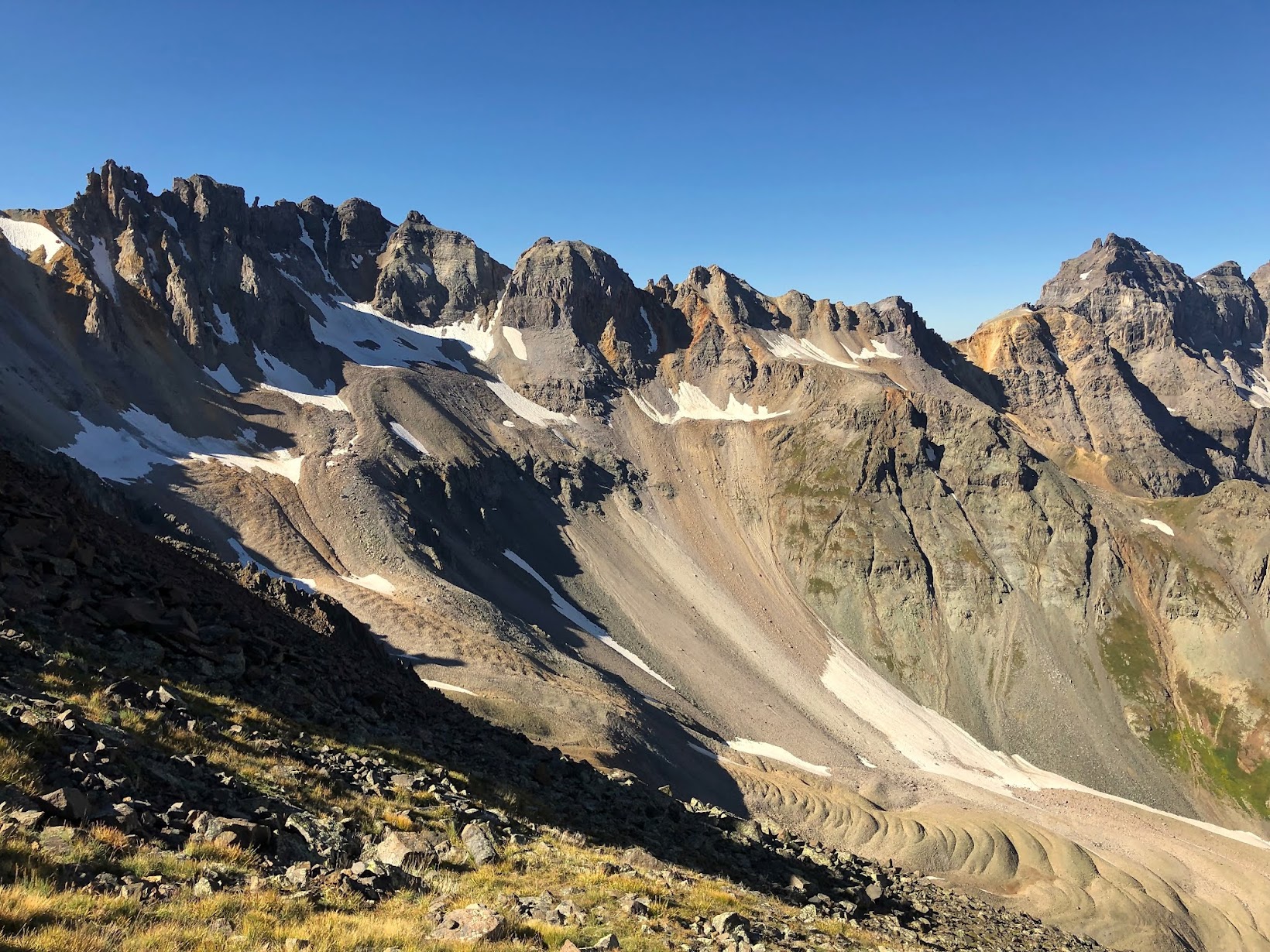 The only problem with getting an early start on a "short" hike is that one arrives home with only a half day spent. After an hour or so Bobbie and I decided we were bored. Seeing that the lap lanes were up to 79 degrees, we walked down to the Ouray Hot Springs Pool for a good swim and soak.

Such is the life in Lovely Ouray. We are obscenely blessed.
Peace out,
mark and bobbie
Posted by Box Canyon Blog.com at 9:21 AM