The Highly Eroding New Face Of Outdoor Recreation, & Rough Day On The Trail To Little Giant 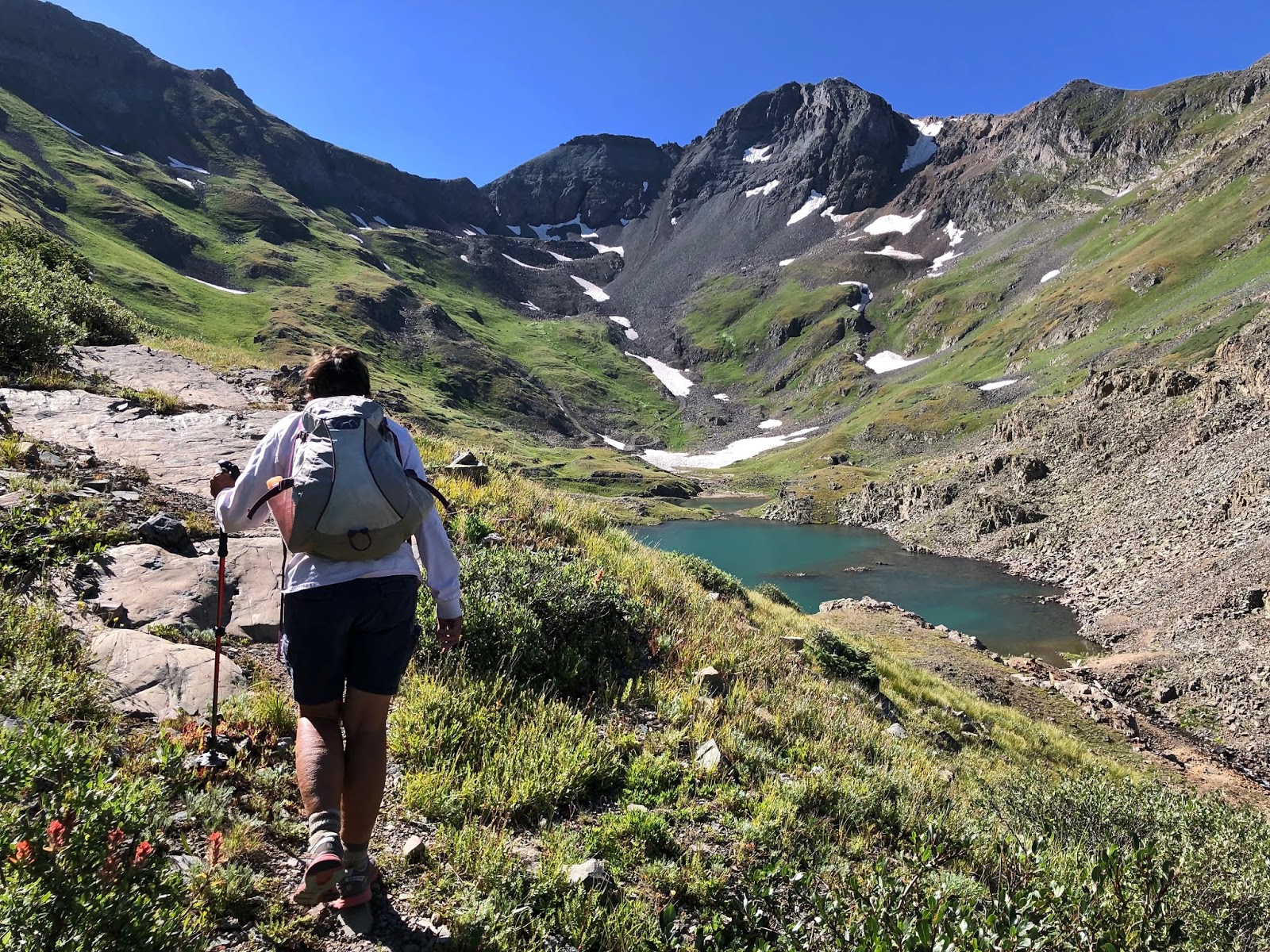 Bobbie and I decided it was time to go in search of some new "dots." One of her suggestions peaked my interest...a summit on 13,400 foot "Little Giant."  Turned out my "spirit" was raring to go. But the flesh...not so much.

The access road to Little Giant was a few miles east of Silverton—a once quaint and proper mountain town now whored out to the burgeoning ATV/OHV crowd. I'm not referring to the quiet little putt putt Quads of yesteryear so much as the new bigger-and-faster-is-better trend perfectly exemplified by "Razors." 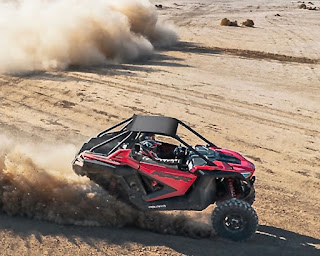 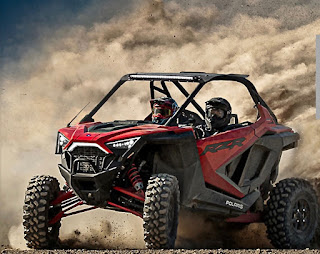 Pardon my prejudice, but I fear this is the new face of outdoor recreation, especially out here in the Wild, Wild West. Dust raising, rock throwing, decibel shattering all-wheel-drive ATV/RAZORS (et al.) equipped with rugged suspensions and powerful engines to handle the roughest terrain with speed. Throw in four knobby tires and put the pedal to the metal, baby.

Once upon a time, sleepy little ole Silverton was a cute and respectable mountain town, known as being the turnaround point for the Denver and Rio Grand olden-days/narrow guage Steam Trains headquartered in Durango. Most residents agree that the D & R Railroad is the best thing that ever happened to Silverton. It disgorges railcars full of fat-wallet tourists up to three times a day all summer long. Except for the arriving/departing toot of a nostalgic and harmonious steam whistle, Silverton modestly prospered in peace and quiet.

Unfortunately, a few years back, Silverton sold its soul to Satan by opening their hearts, minds, and street ordinances to embrace raucous ATV/Razors. And now the town, as well as the surrounding "Jeep trails" are over-ruined with noise, dust, and the erosional effects of spinning knobby tires that steadily loosens the dirt/soil that once made for smoother and safer Jeep rides. Once the soil is loosened it gets carried away by snow and rain, leaving a roadbed of rocks and ledges.

Today Silverton is a train-wreck of lengthy ATV trailers that disembark payloads of irritating 4WD super-bugs. And, in case you don't have one to call your own, there's no shortage of rent-a-razor shops to satisfy your "inner destructive juvenile delinquent," as they proliferate about town like rabbits in heat. Trust me, Main Street Silverton is not nearly so "quaint" when lined with car lots full of rental Razors. It looks more like Colfax in Denver.

"The times they are a changin," warned Mr Dylan, and along with those changin' times, I fear, is the face, if not the definition, of "recreation" in the eyes of the upcoming generation. I've seen the monster coming—watched in horror as it grew like an all-consuming Sci-fi Blob—starting in the pristine red rock deserts surrounding Moab. And now the "blob' has found southwest Colorado. Run for your lives, people.

Bobbie and I are life-long campers, so we've seen the change from hikers, to hikers and mountain bikers, to motorized ATVs. Today, especially in Utah for some reason, a "typical" camping/vacationing/RVer family rolls into camp in a humungous "Toy-Hauler" full of clamorous ATVs/Razors. We watch as well-meaning, but shortsighted (if not misguided) parents unknowingly teach their impressionable offspring that the rip-roaring, high powered, knobby-tired, super suspension-ed  ATV/Razor/dirt-bike is how we recreate in the great outdoors.

I am both saddened and maddened by this societal/cultural shift in values that, more and more, favor the thrills of horsepower, noise, speed, and dust, over quieter, slower, less damaging intimate recreational pursuits like walking, hiking, mountain biking and other viable, motor-less ways to explore and experience the peace of wilderness settings.

To be clear, I am not against the use of "Jeeps" or SUV type 4WD type vehicles to explore existing backroads and trails because, quite frankly, they are quieter, slower-going, and less apt to produce clouds of dust or pitch rocks in their wake.

I can assure you, I'm no Sierra Club, tree-hugging whacko environmentalist who wants to padlock government lands. I'm just a guy who wishes the ATV/Razor/dirt bike enthusiasts would ease up on the gas a little, muffle their motors better, and/or, in a perfect world, just go back to "Jeep-type" vehicles.
Digression over...back to Little Giant.

We met no one as I eased Sue Bee up a few miles up a narrow, rocky, switch-backing Jeep trail. Finally I drew the "line," just below timberline, where rocks in the trail grew large enough to poke a hole in our oil pan. I parked near an old mine ruin located in a still, isolated basin. Ahhh. We are alone...first to don packs and greet a picture perfect morning.


Stumbling along the remaining Jeep trail, I noticed my pack felt heavier than normal. I couldn't seem to pick up my feet or walk in a straight line. I'll come around, I thought. Just need to warm up...get the ole blood flowing.

I don't know...perhaps my legs hadn't recovered from the bike-grind up to Blue Lakes Trailhead with Leon. Or maybe too many days in a row of doing laps at the pool. Whatever, it's rare for me to have an adrenalin-less "off day" above timberline, especially in a new and dramatic mountain setting with a 13er to climb. 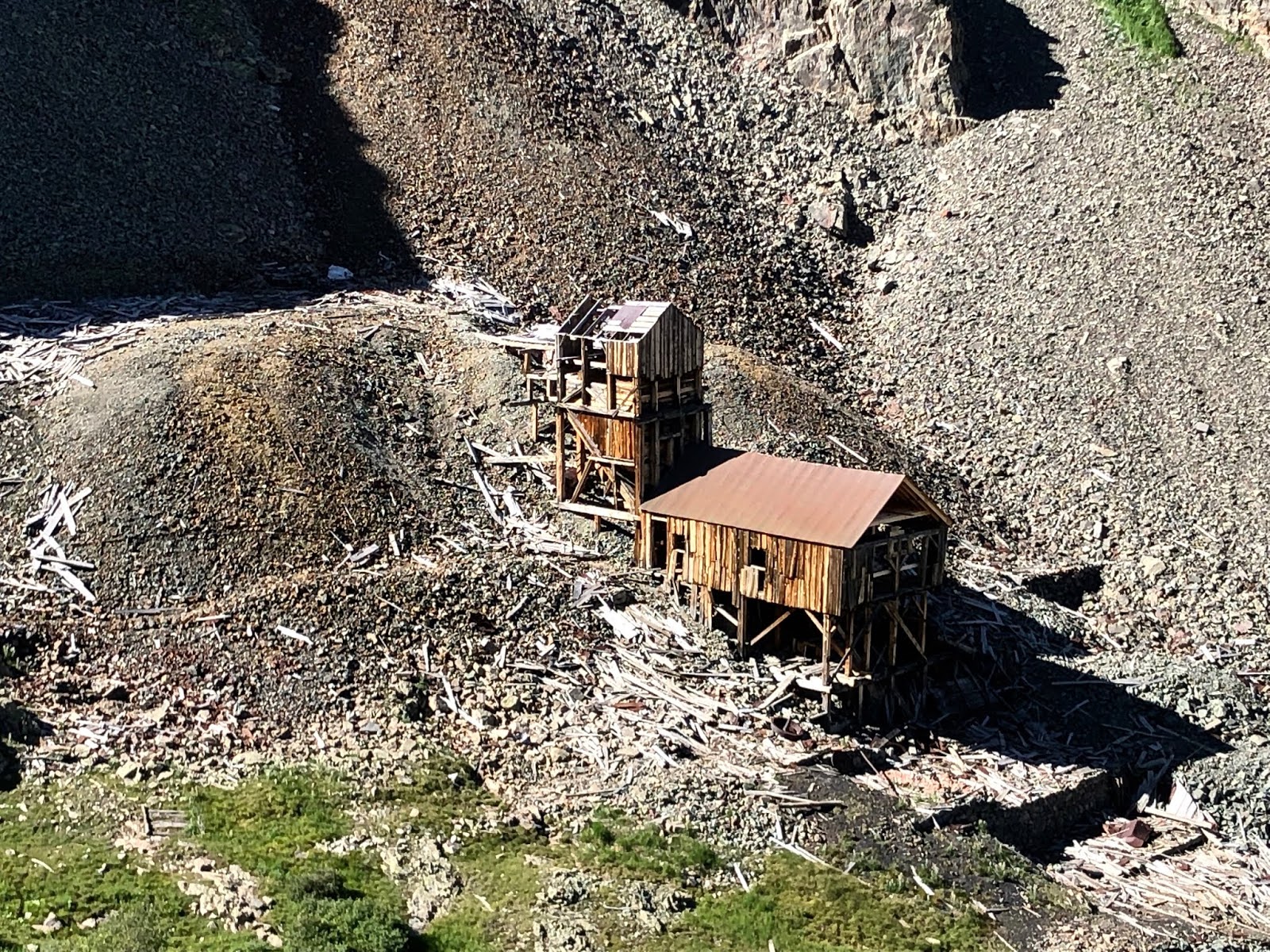 A mile or so later, we reached a spectacular upper basin. It had a serene lake that reflected our "Little Giant" summit goal. 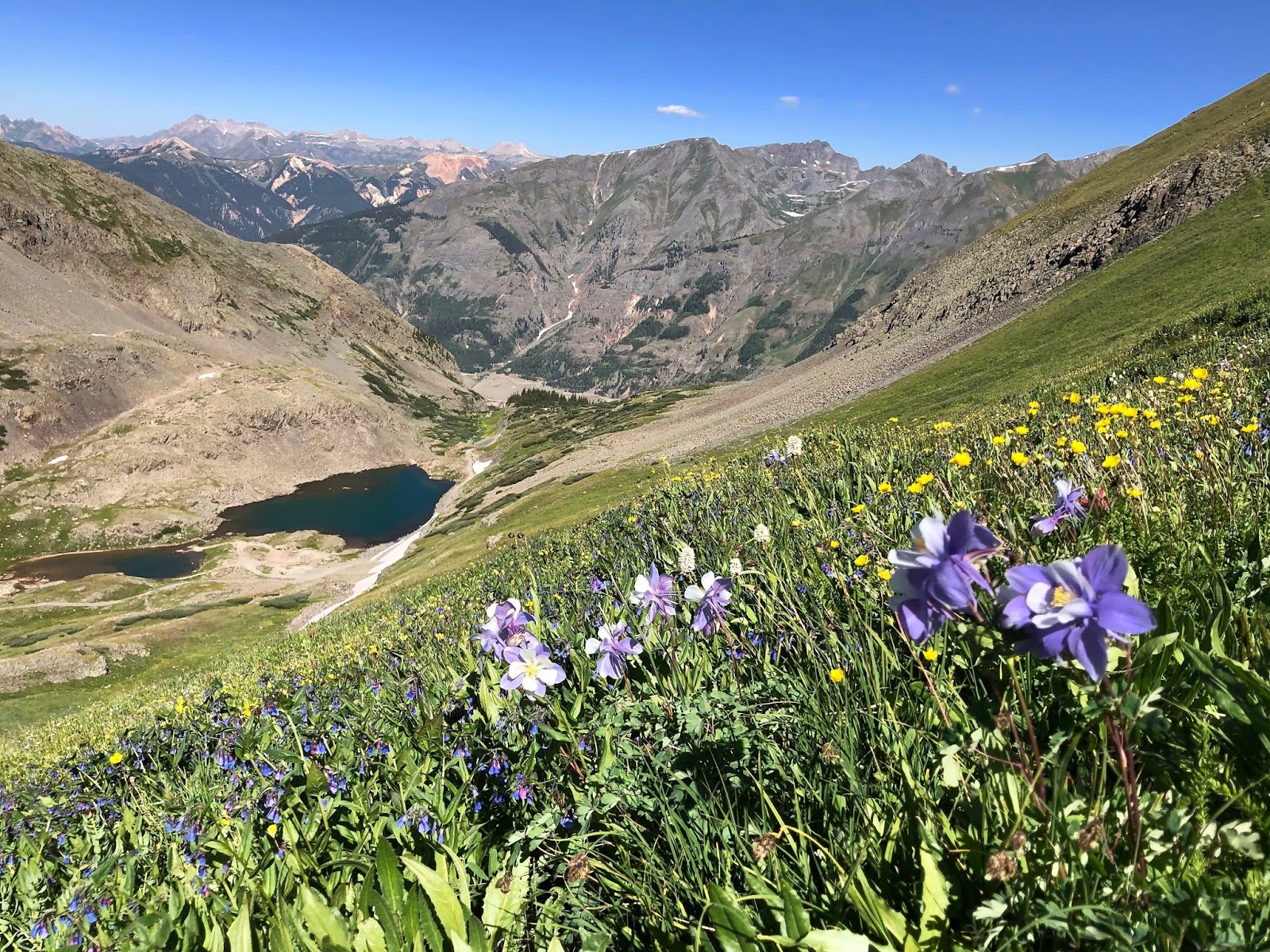 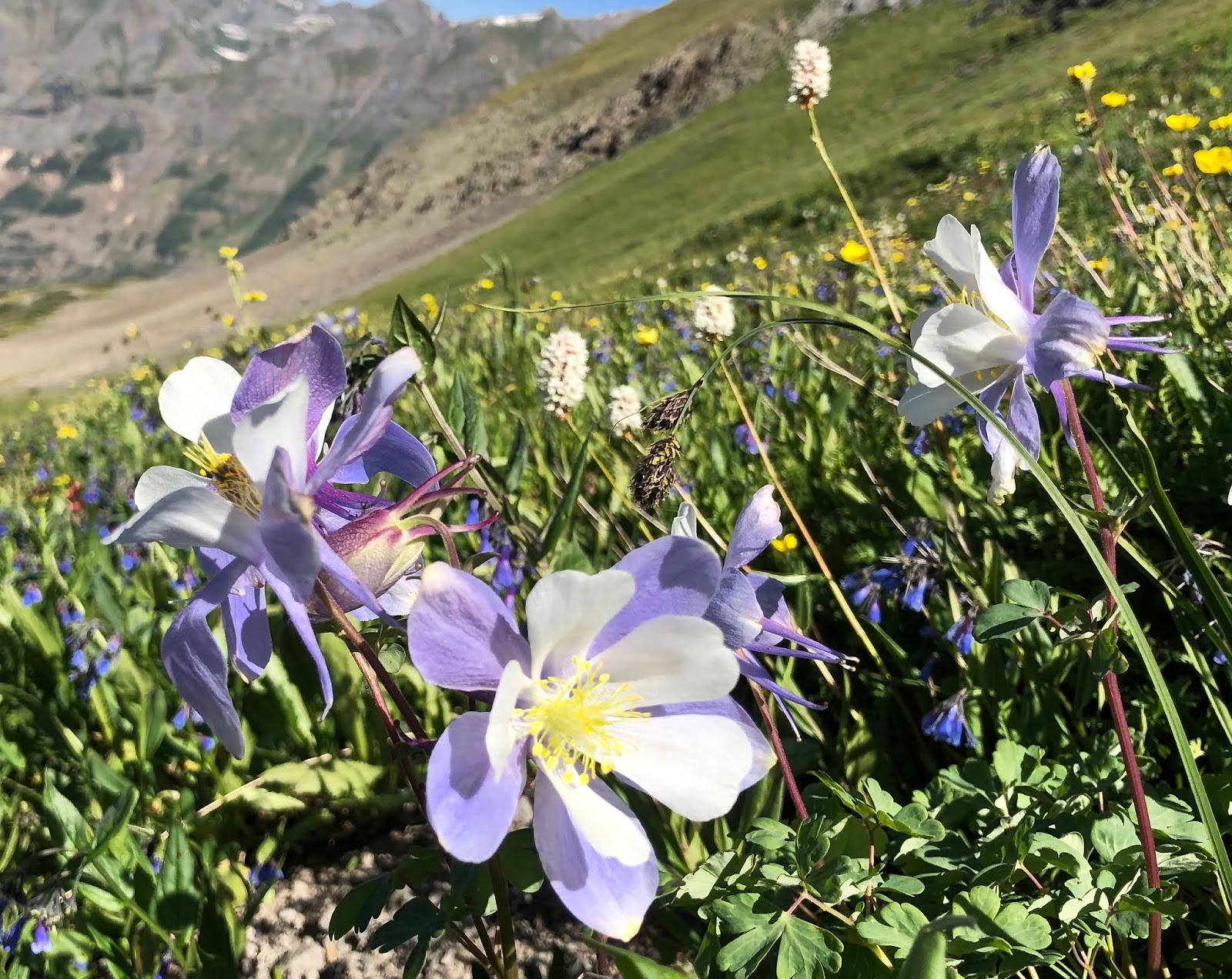 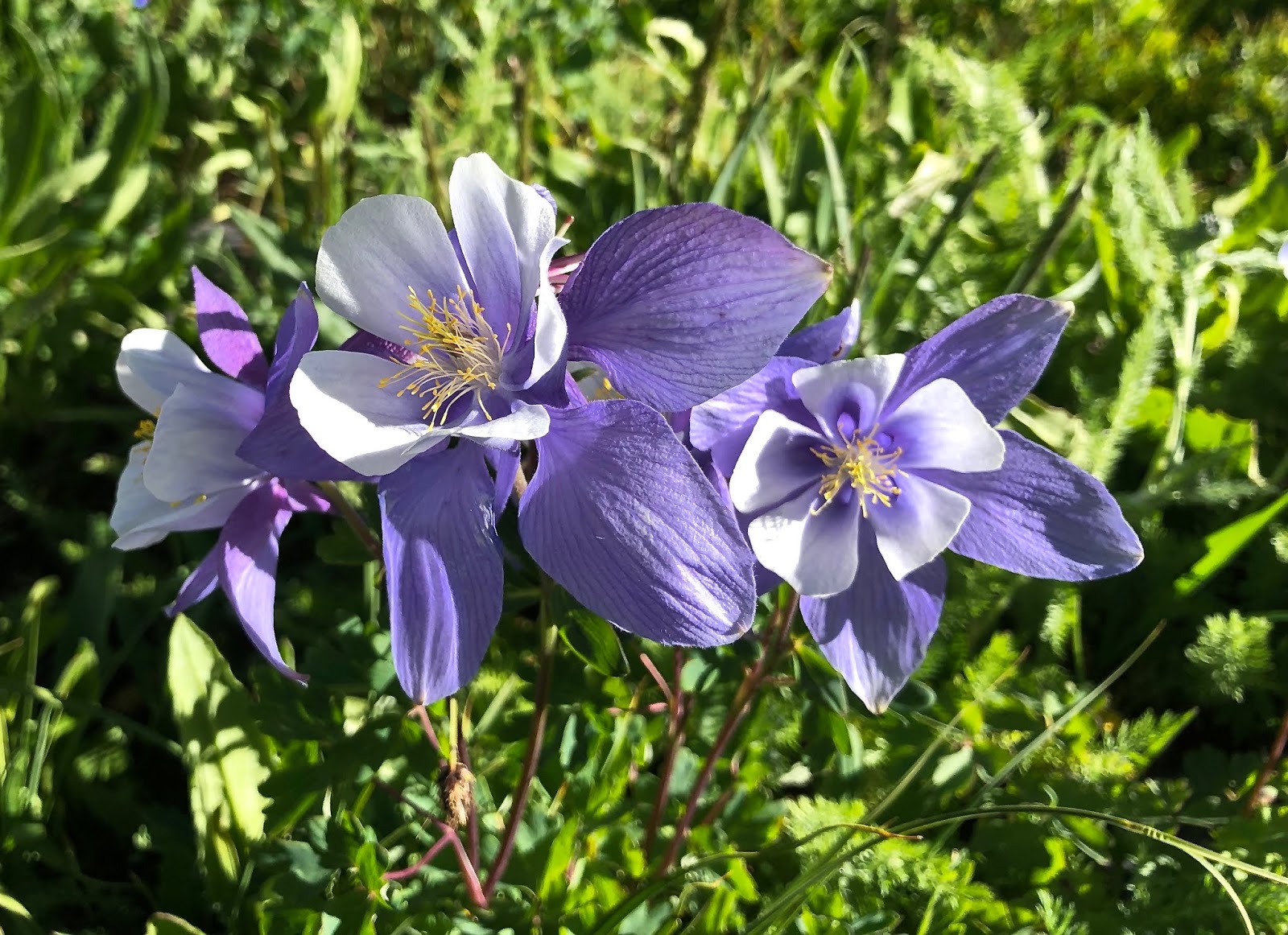 The trail had been steady, angling up the mountainside in a steep, but manageable rate of ascent. Then, suddenly, the trail shot straight up, on a surface of hard-packed dirt sprinkled with "marbles." We couldn't carve a foothold to save our lives (literally). It was a miserable and frustrating section that took its toll. And we knew it would be worse going down. 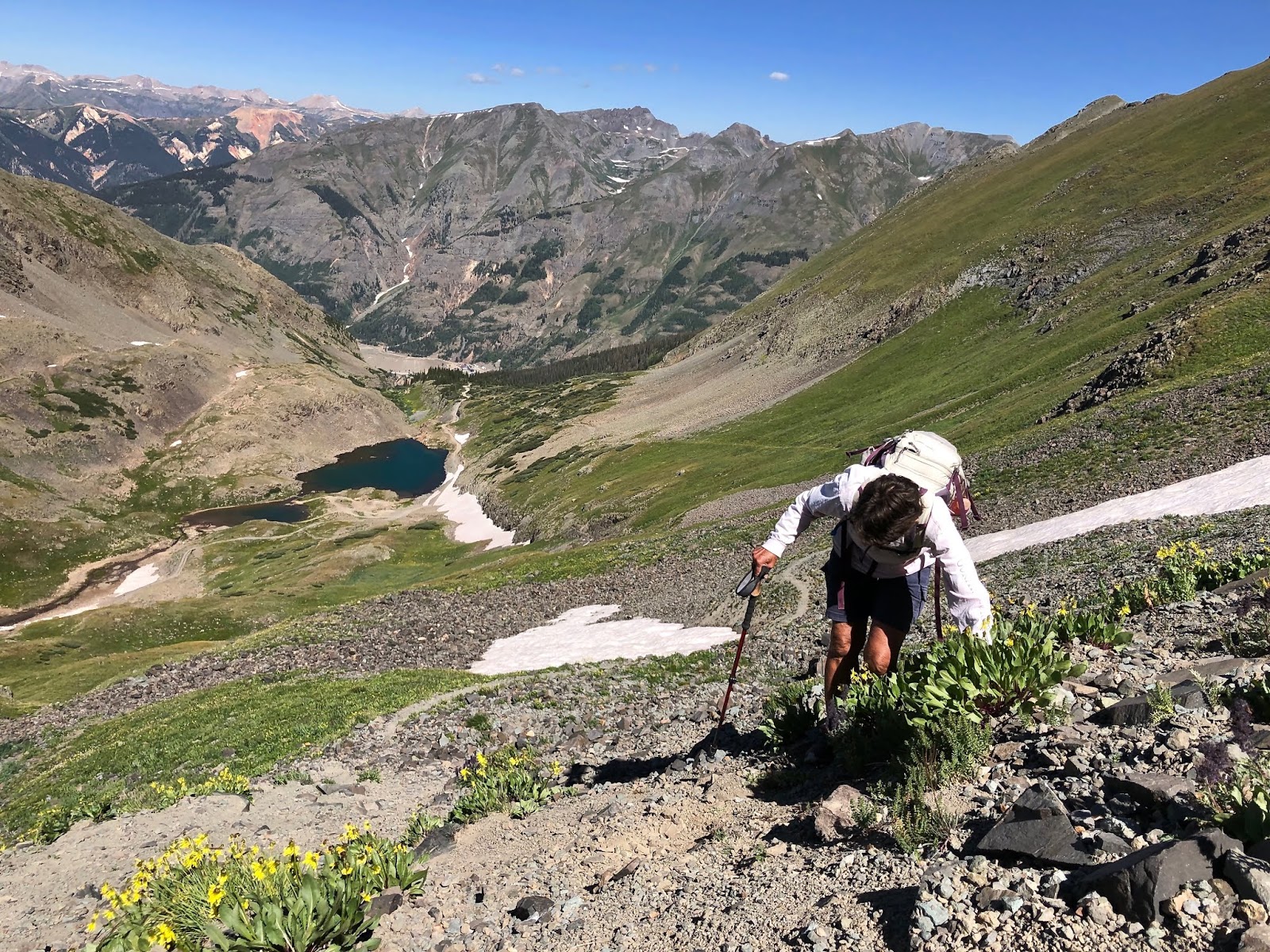 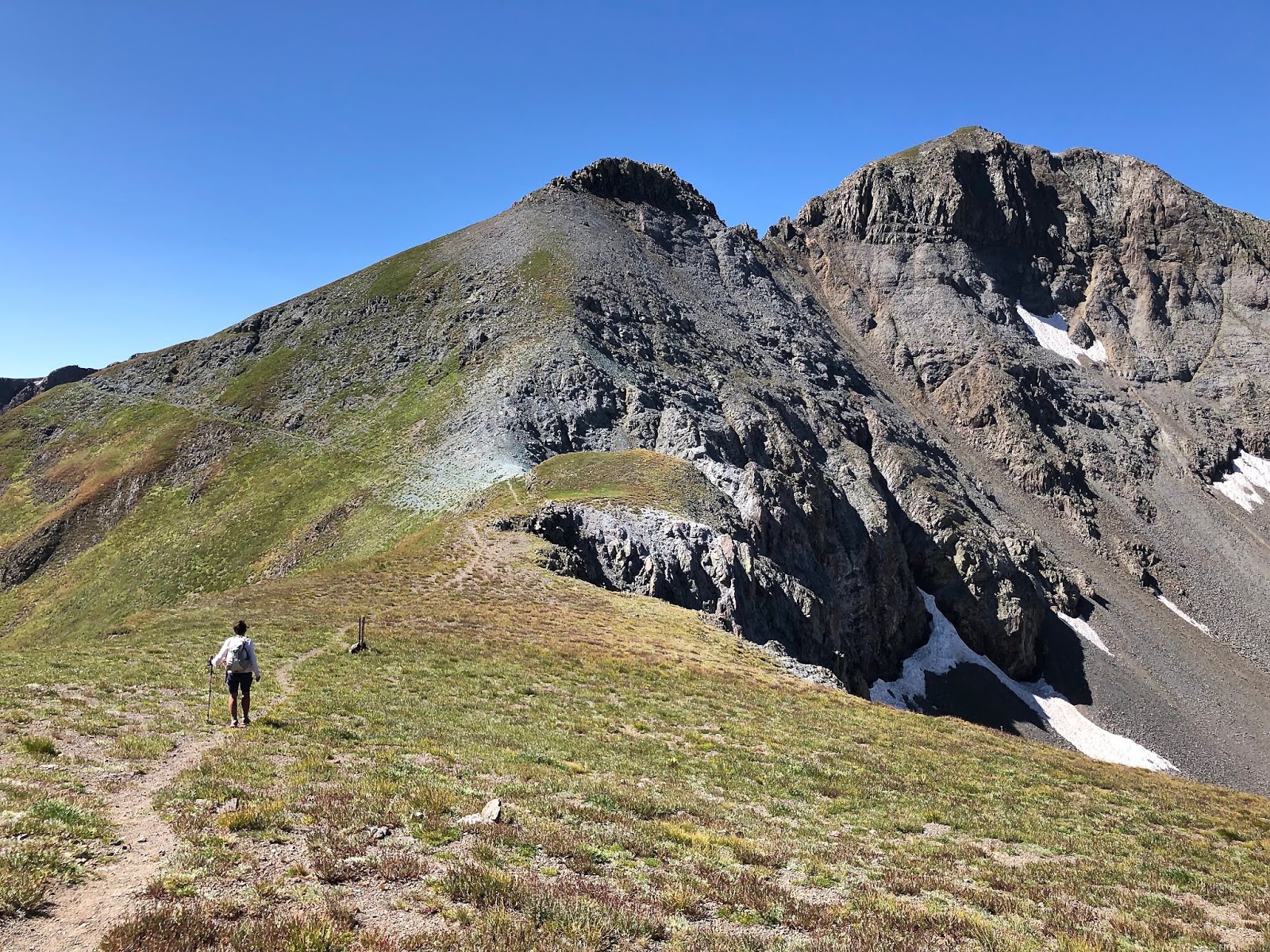 By the time we reached the saddle I needed calories and a break. No energy. Light headed. Just Low blood sugar, I thought...

About halfway through a Cliff Bar, I felt the familiar symptoms of a pre-migraine. It always begins with vision problems...a sparkly aura of blind spots that twinkle and blind. As it progresses, I become extremely sensitive to light and feel an overall malaise. These episodes come and go every 6 months or so...usually first thing in the morning. Eventually the symptoms pass within an hour or two, leaving me with nothing more than a dull headache and unsteadiness. My dad used to complain of the same symptoms. The wonder of genetics... 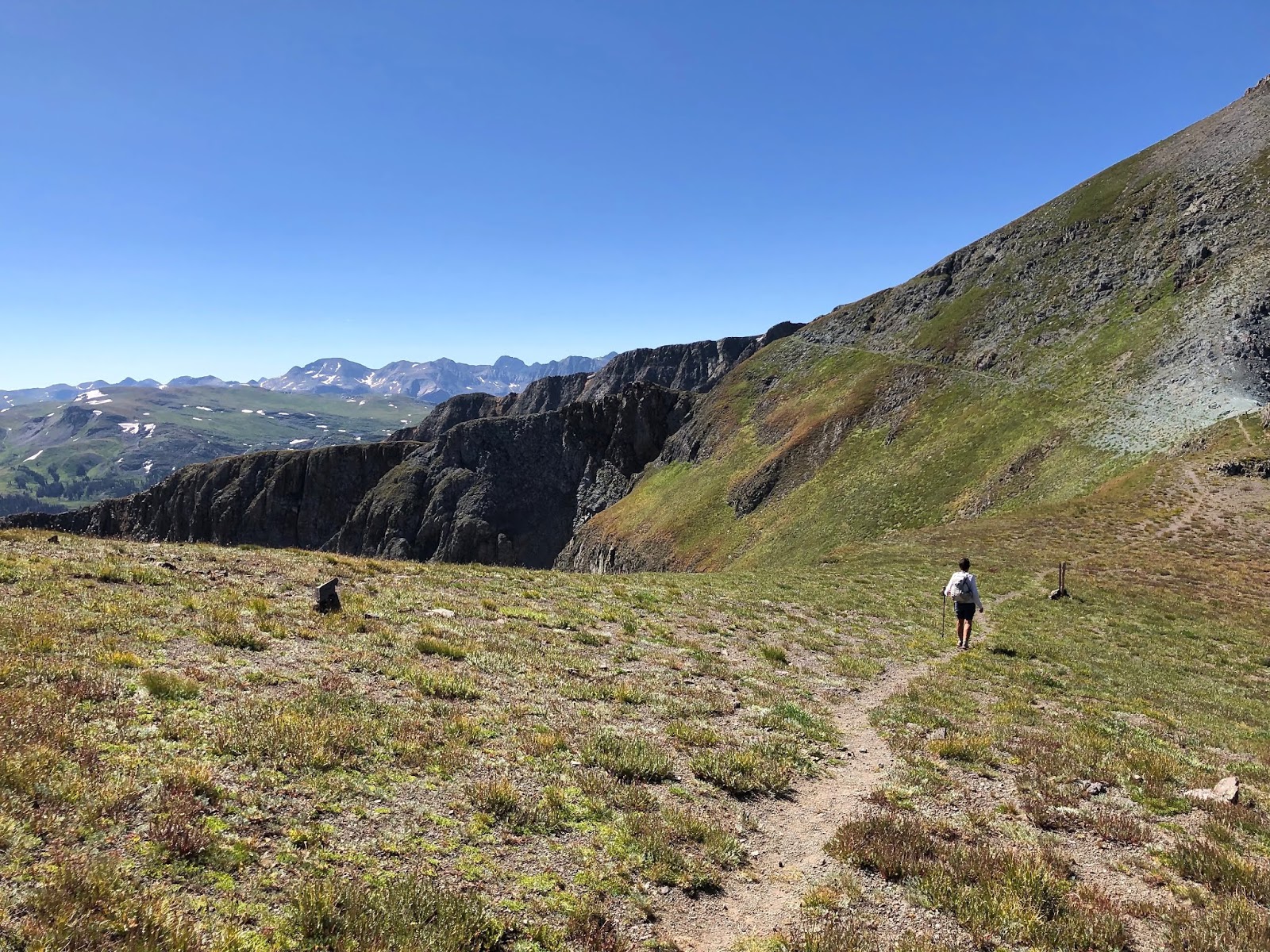 After an hour the symptoms began to fade. I felt weak and unsteady, relying heavily on my hiking pole to stay upright. I didn't want to turn around short of the summit after all the 'investment" to get this far. I slung on my pack, wobbled along behind Bobbie, hoping for no missteps on the diminishing, off-camber trail. 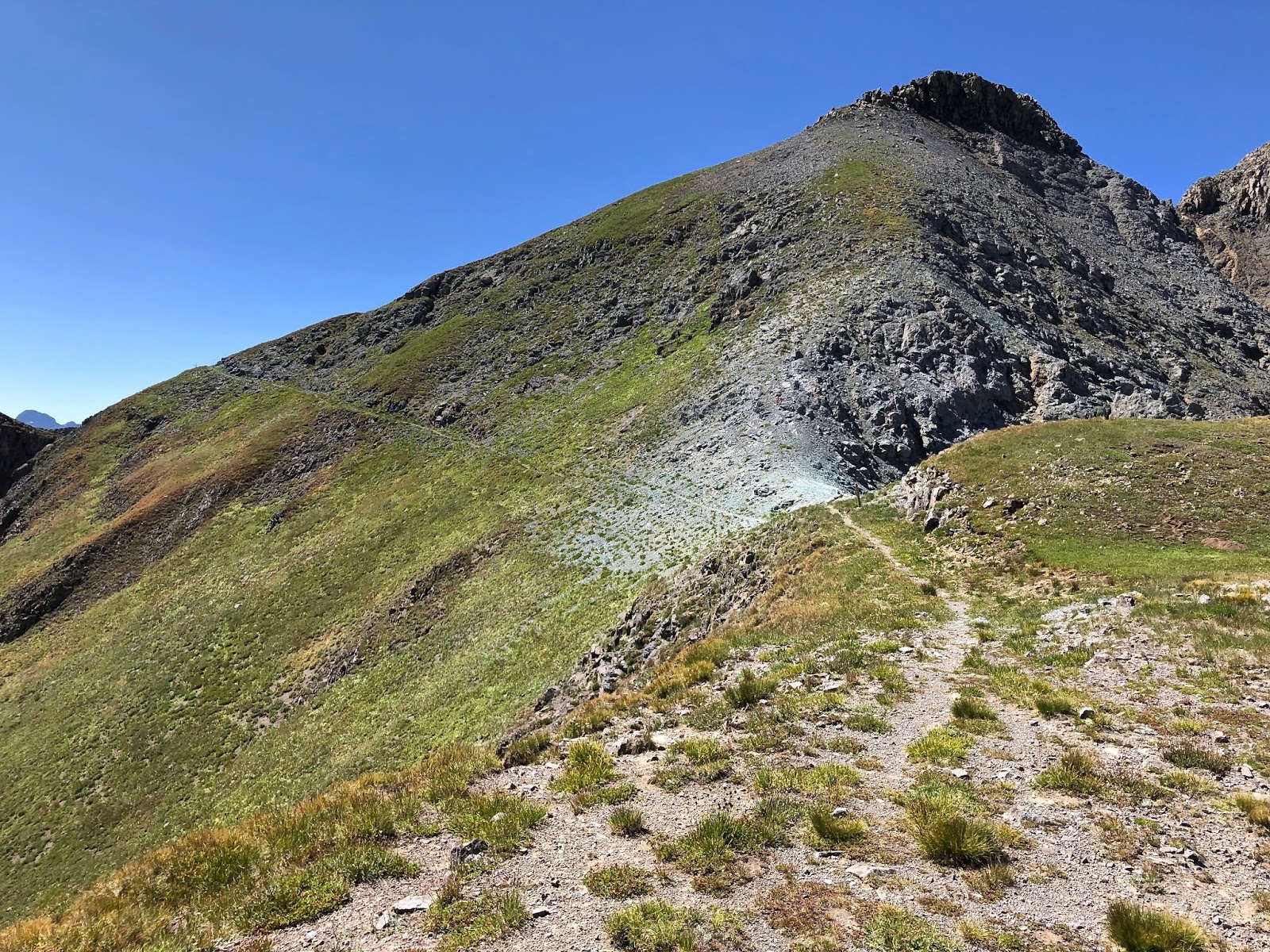 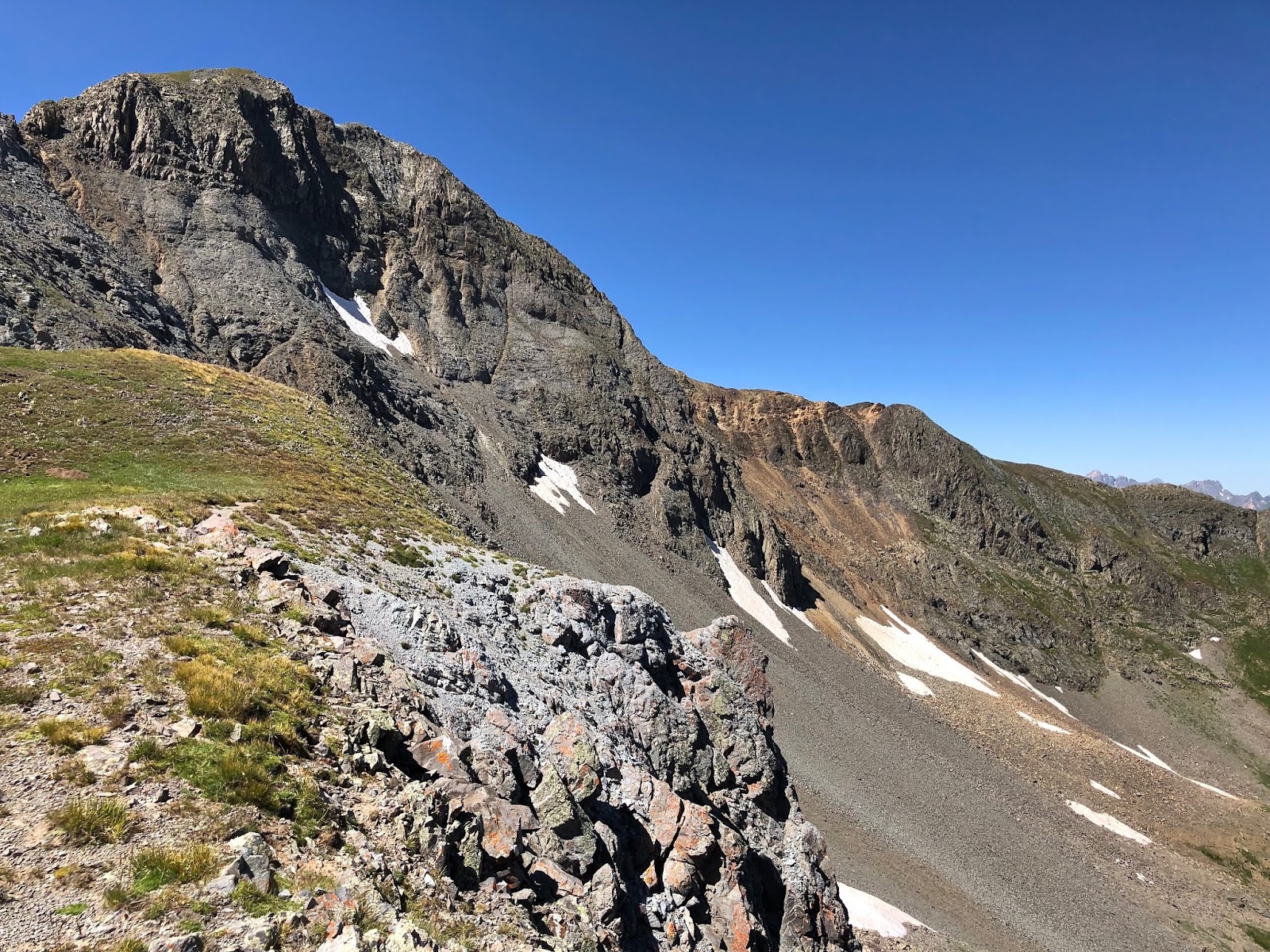 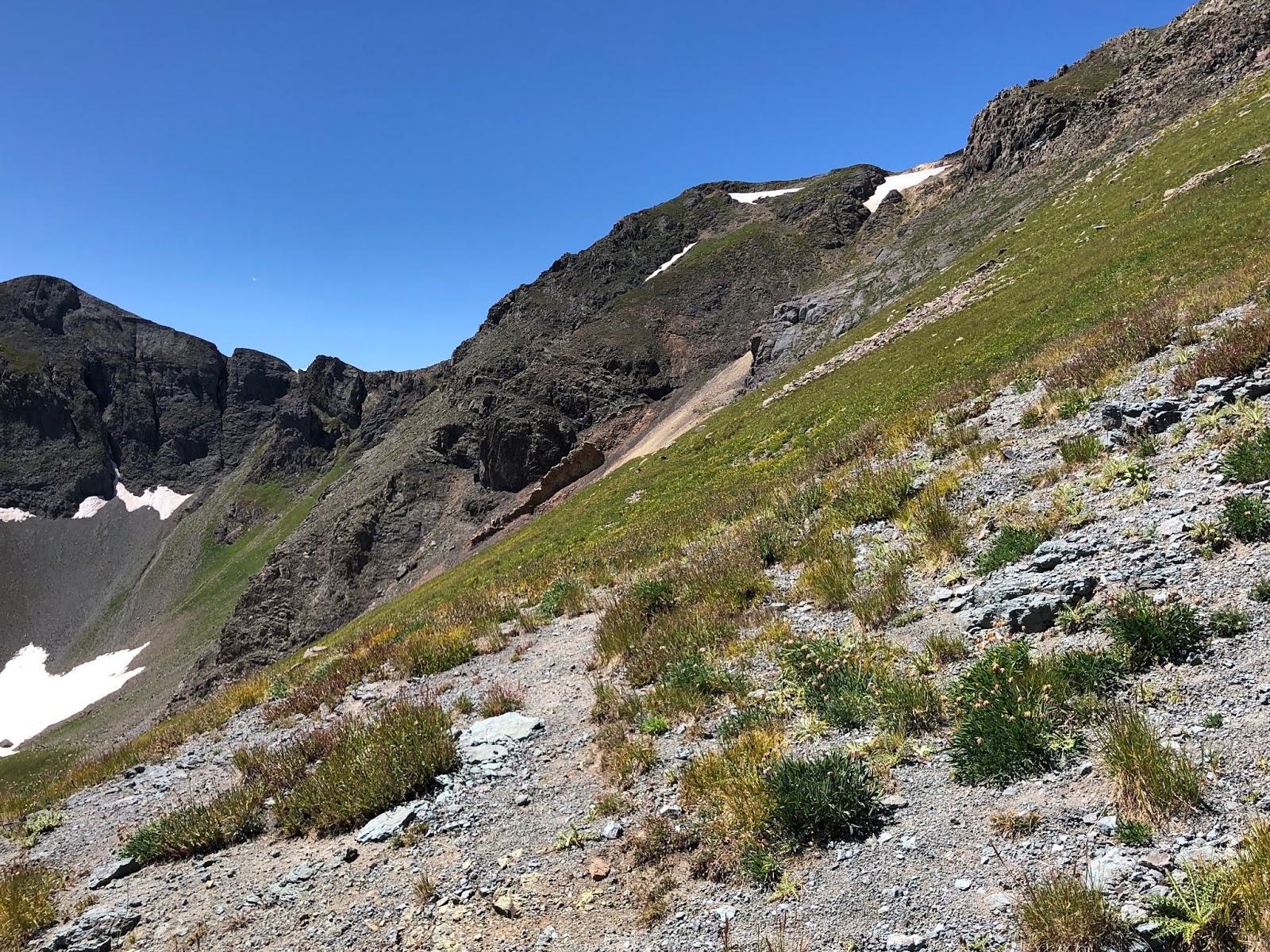 We hiked around behind the aforementioned sub-peak...somewhere behind hid Little Giant. Our lame guide book told us we needed to scramble up to the ridge in the above photo and hang a right to the summit. The trail pretty much disappeared, but figured we needed to cross that patch of light colored scree center-photo. From there, maybe we could spot the best route up to the ridge.

Not an easy task, though, getting to the scree on a slippery side slope. Just short of the scree I spied a potential route...if we could safely connect a few ledges. About that time, however, unsteadiness had pretty much sapped all my strength and will. Better judgment convinced me to throw in the proverbial towel. Shit. So close, yet so far away...
*********************************

Below: A moose family near Crystal Lake on the way to Little Giant. 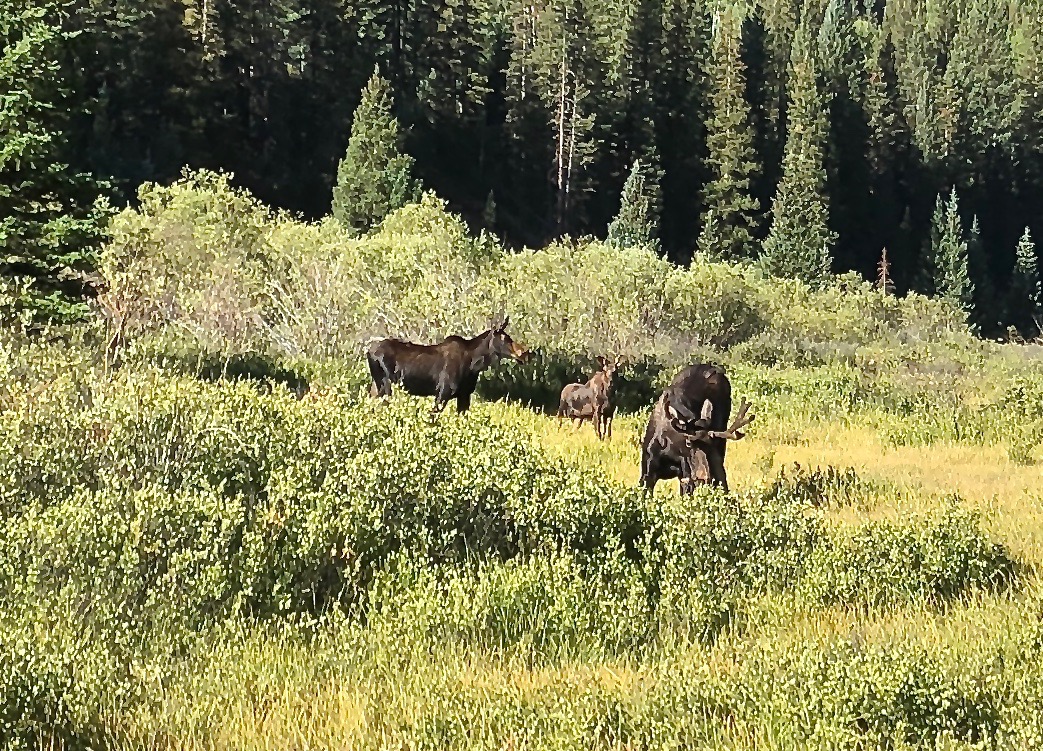 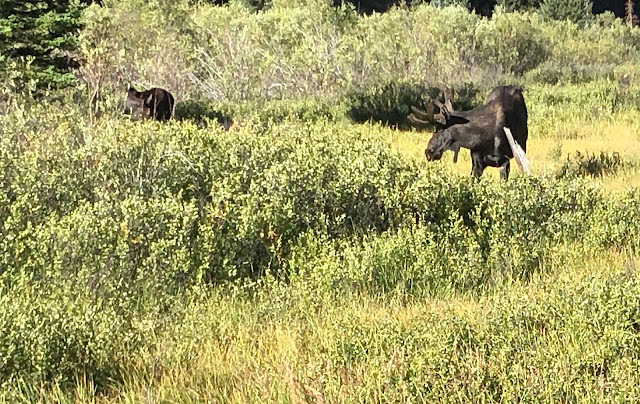 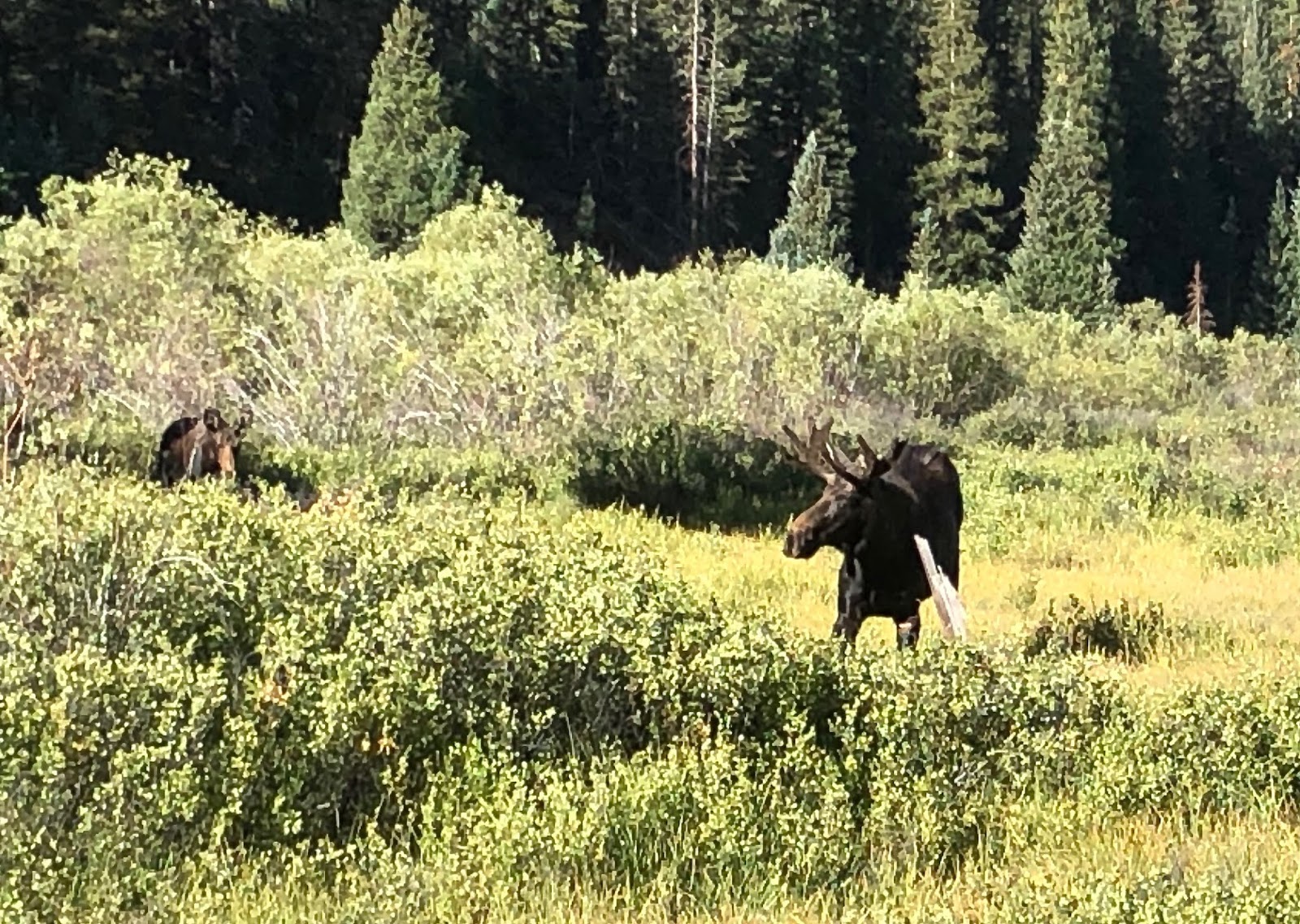 Little Giant and Sub-peak from saddle

Peace out, mates.
mark and bobbie

Posted by Box Canyon Blog.com at 8:42 AM