Transitions and Reverse Migrations: Confessions Of A Half-Time Rv'er 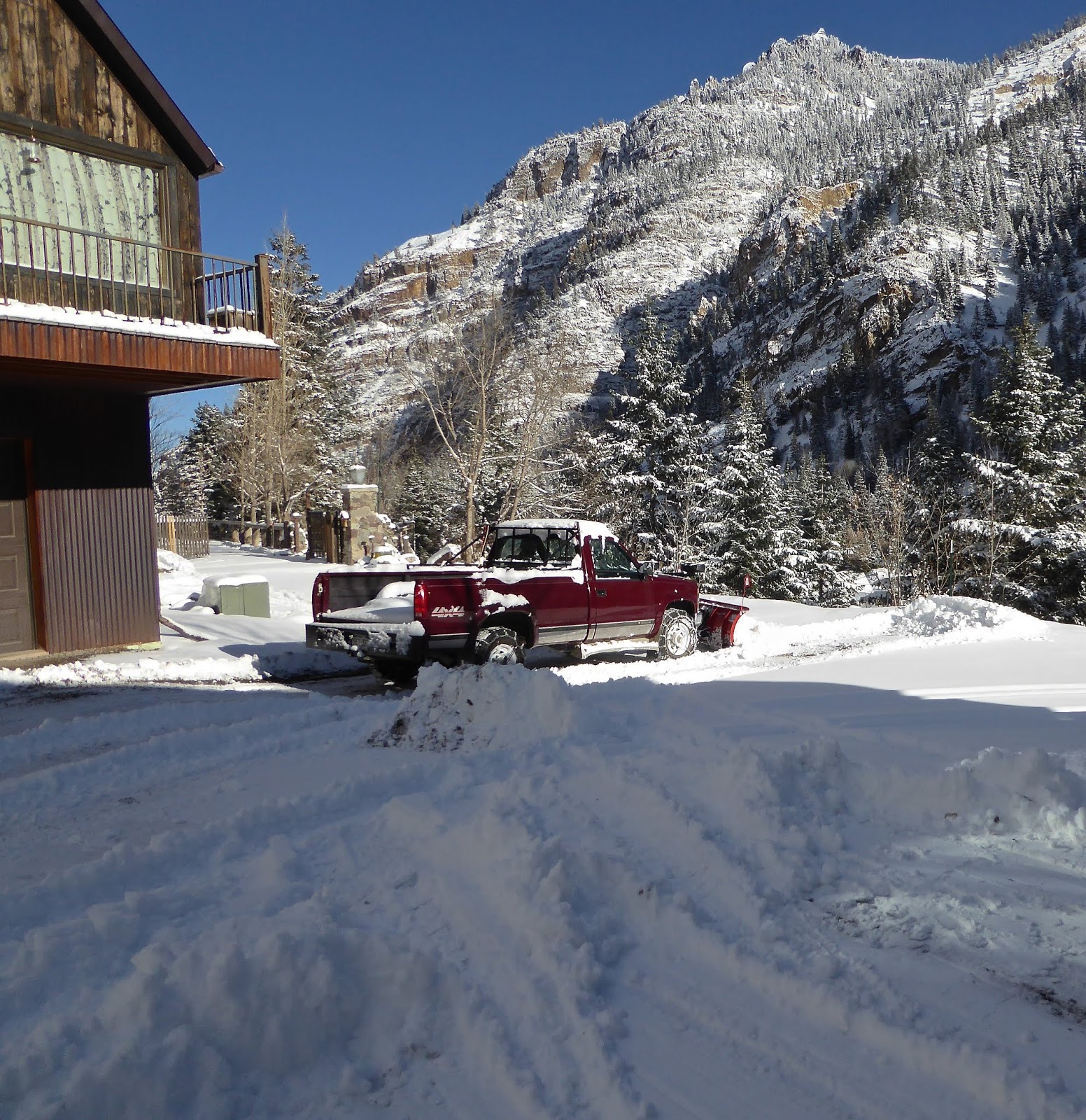 It would take too long and too much of your precious time to button up all our boondocking/biking/hiking/exploring experiences in Southwest Utah over the past month. Thus I've dealt the preponderance of drivel and photographic minutiae the same fate as poor Anne Boleyn's head. You're welcome.

With a Johnson family Thanksgiving reunion in Toledo fast approaching, it was time to pull the stakes on Camp Virgin. After a last minute/last day hike with John and Charmaine, "payback" came before dawn the next morning as rushed around in the cold and dark cleaning and winterizing Goldie for storage. She's now impounded among "trailer trash "peers" in Hurricane, Utah, awaiting bail come January.


We arrived home to Lovely Ouray just in time to deal 6 inches of White Plague. Fortunately the storm cleared out the following day, so we took outdoor advantage blue skies, full sun and mid 40 temps...which, at 8000 feet, feels more like 60 degrees. And yes, I'm wearing shorts and a t-shirt... breaking a good sweat as you can see the ring of proof around my Geezer neck below...


Fear not Faithful Lovelies, for I granted a last minute "Guillotine" pardon to the best photos and a story or two for future publishing.

Here is a highlights compilation of miscellaneous outings, kicked off by another Tour De JEM with new, fellow-boondocking friends John and Charmaine...

Most of the JEM Trail, as well as a surrounding network of MTB trails, are on public BLM land. This year, however, a sign posted at the lower end of JEM revealed that the portion of trail alongside and above Virgin River Canyon is on private property and that there is a plan in the works subdivide it into lots for homes. Below are a few photos of what's at stake should that kind of development take place along the Virgin River gorge... 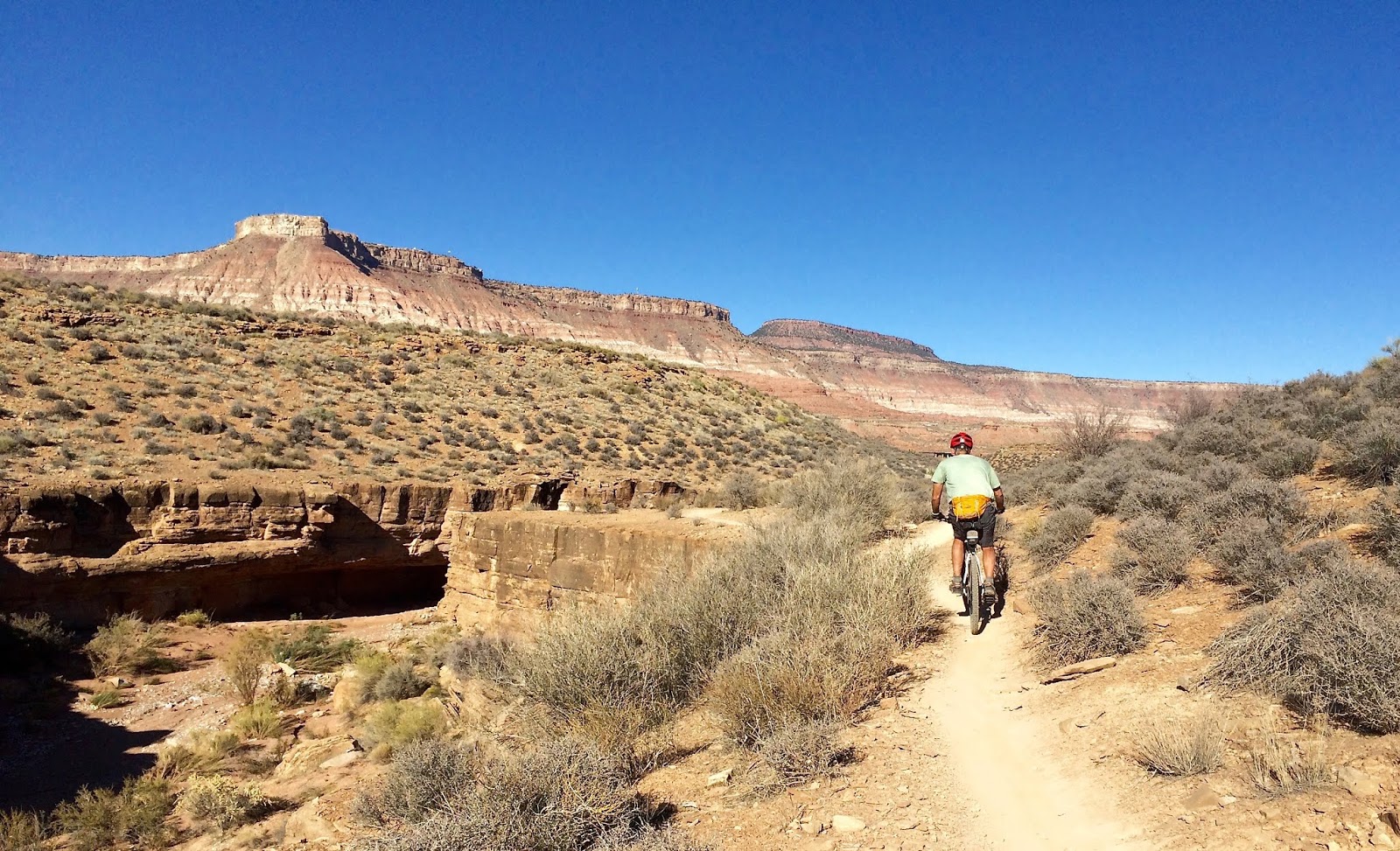 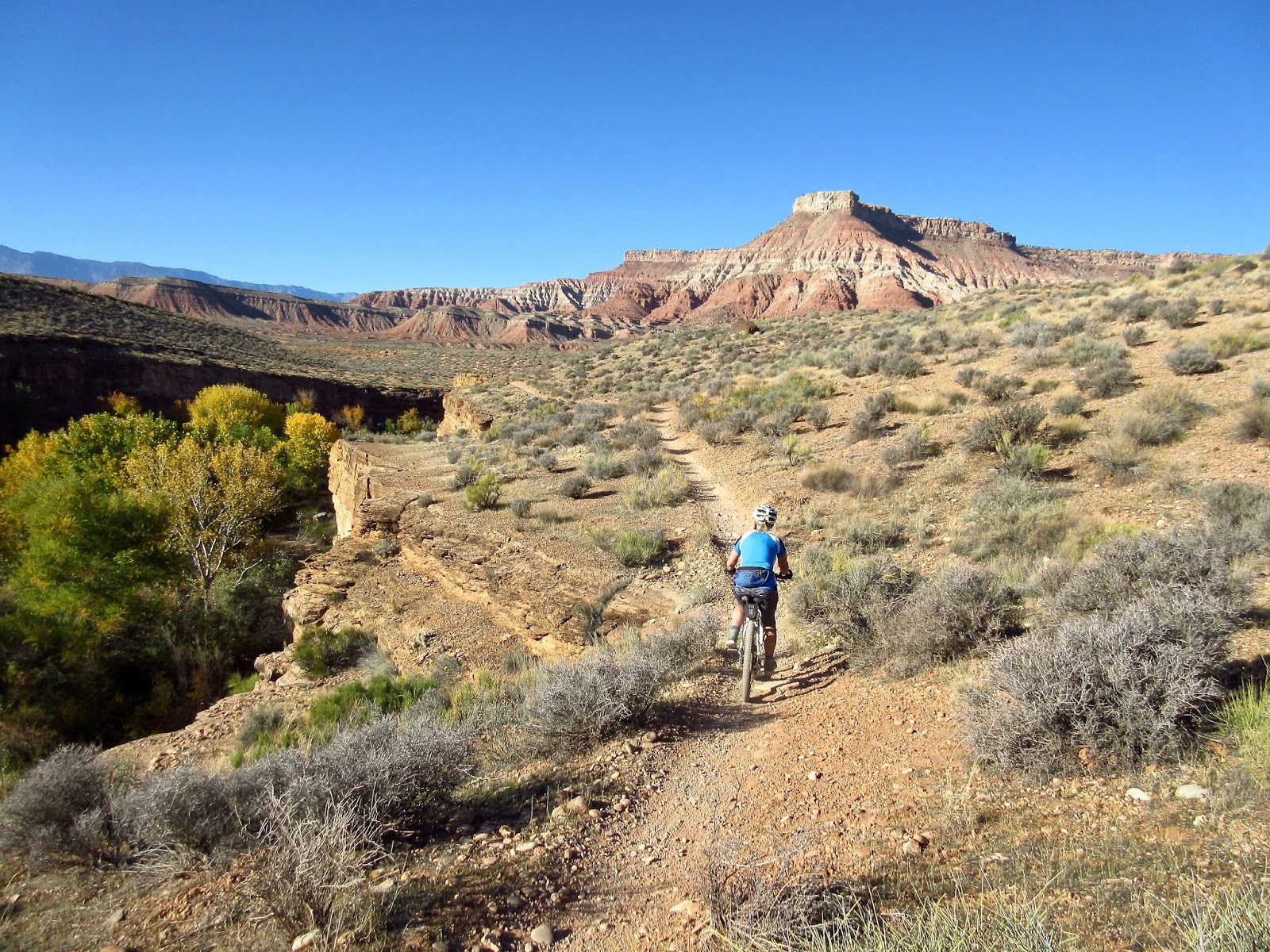 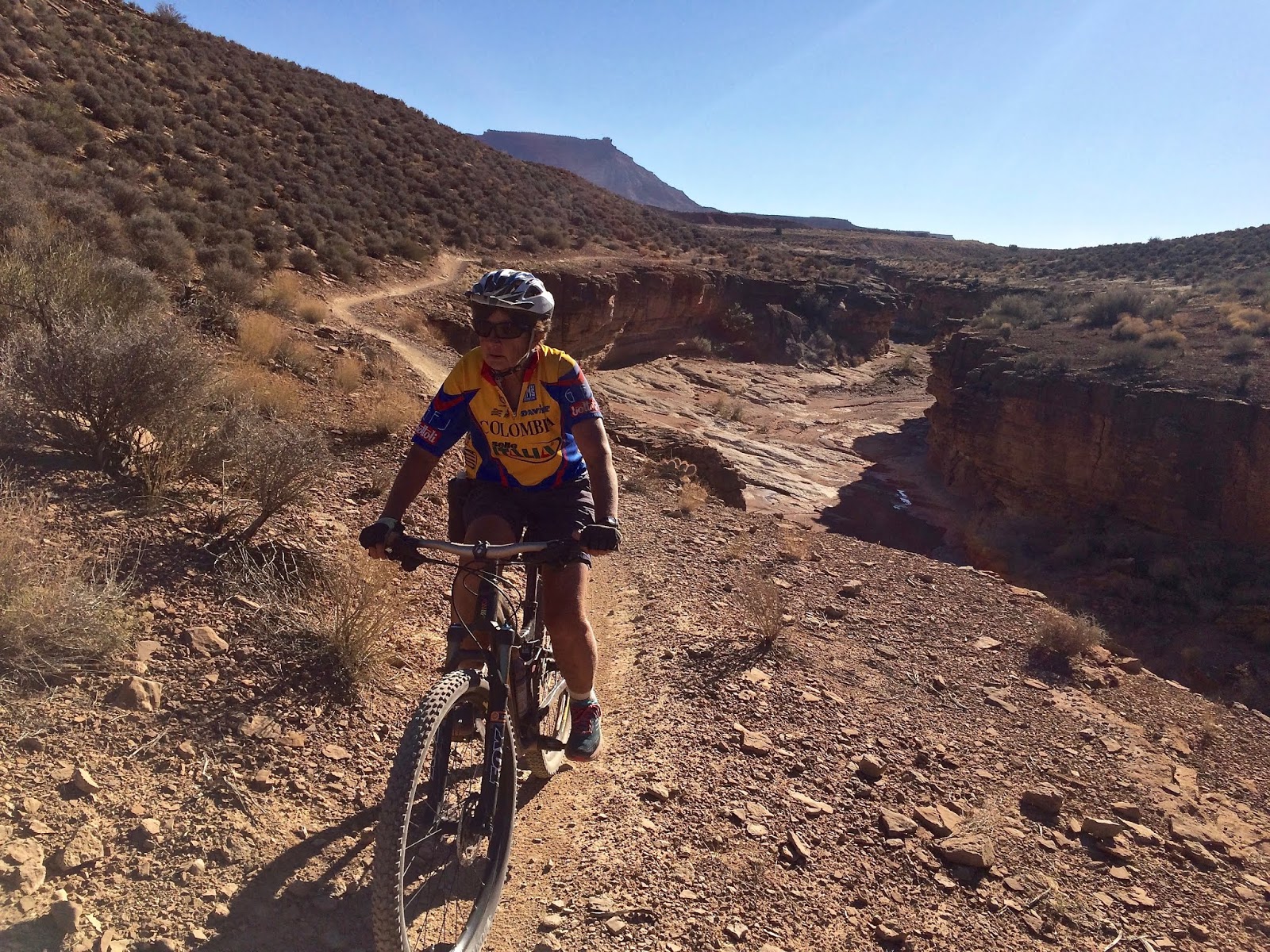 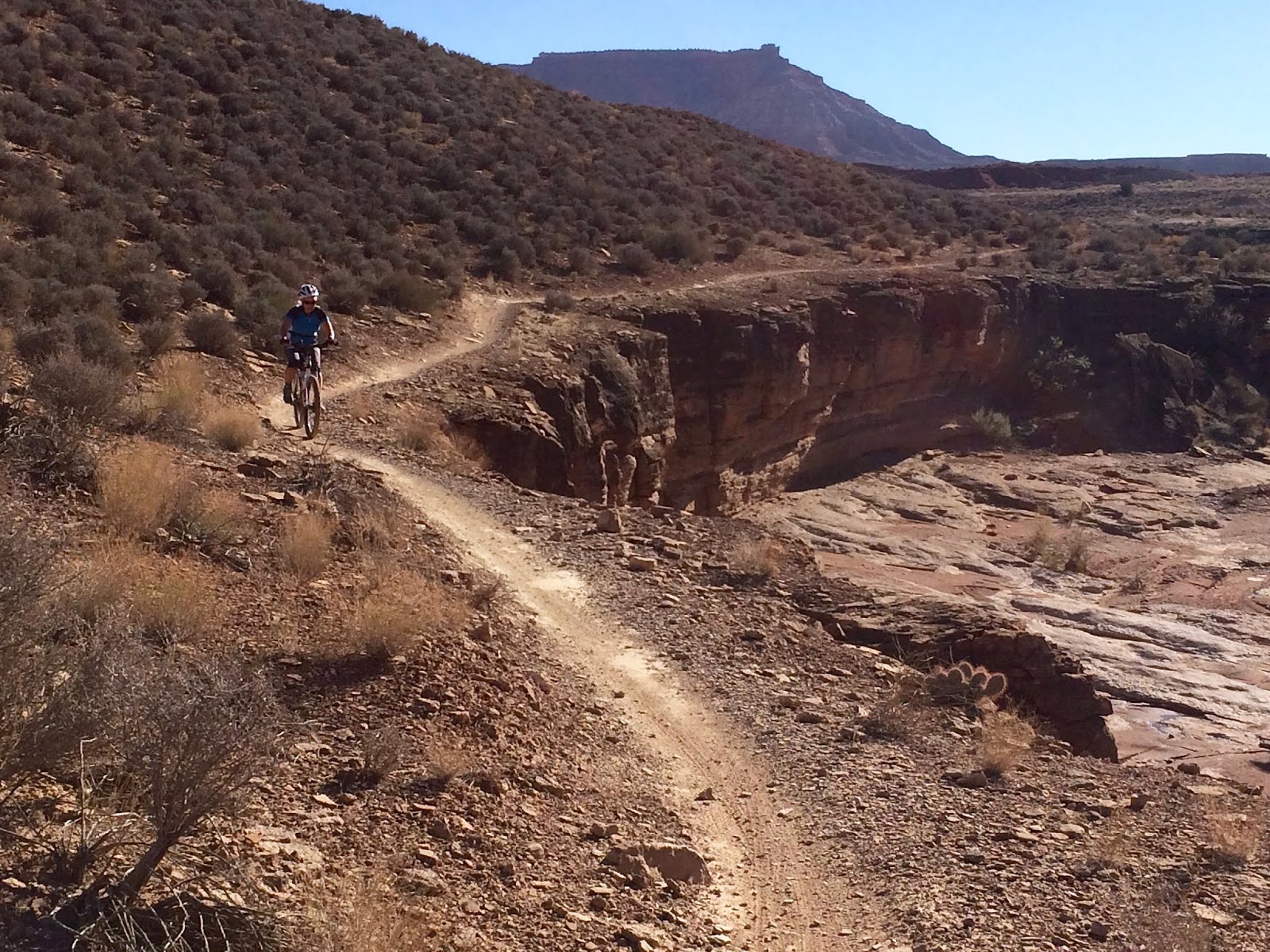 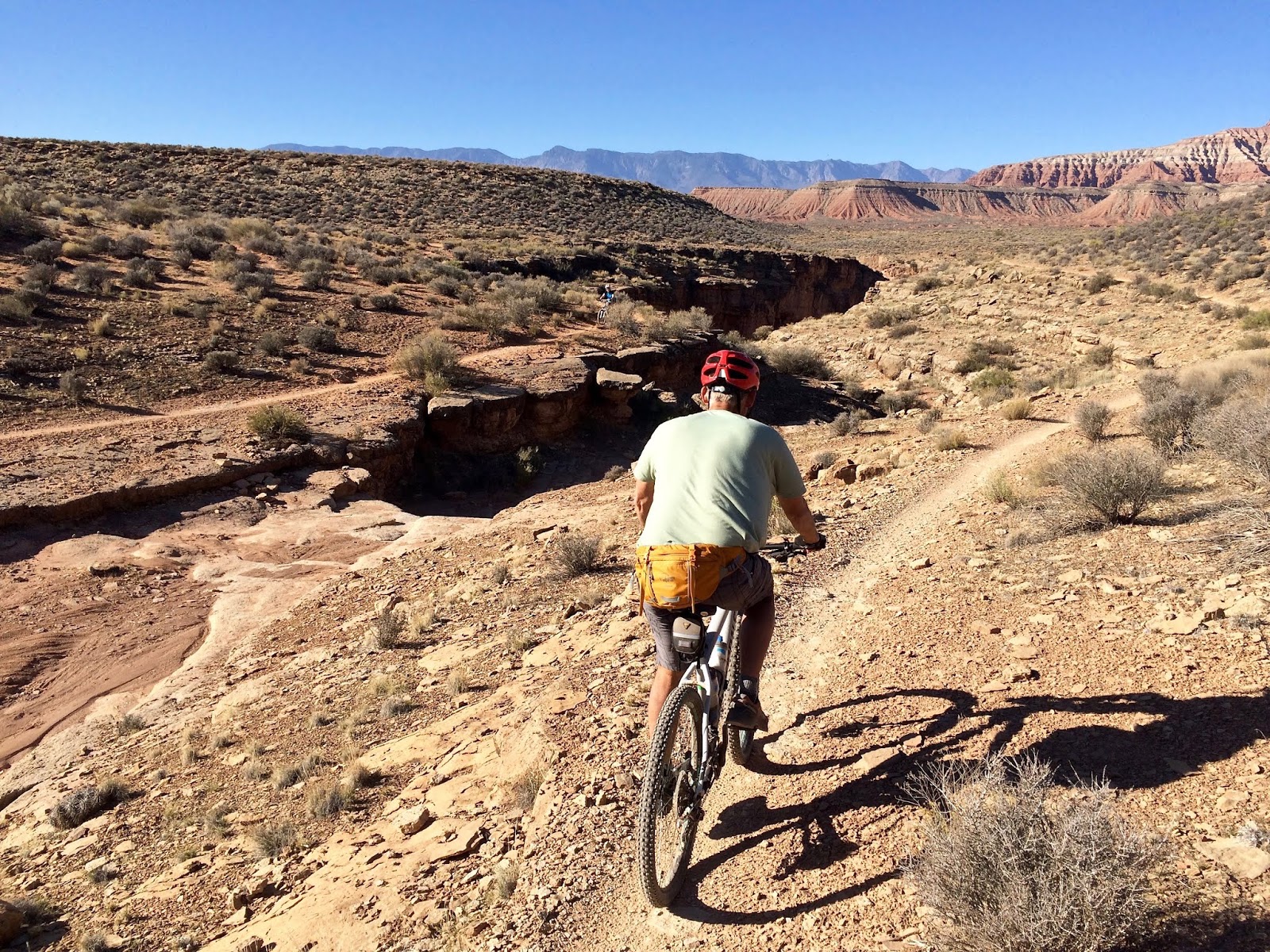 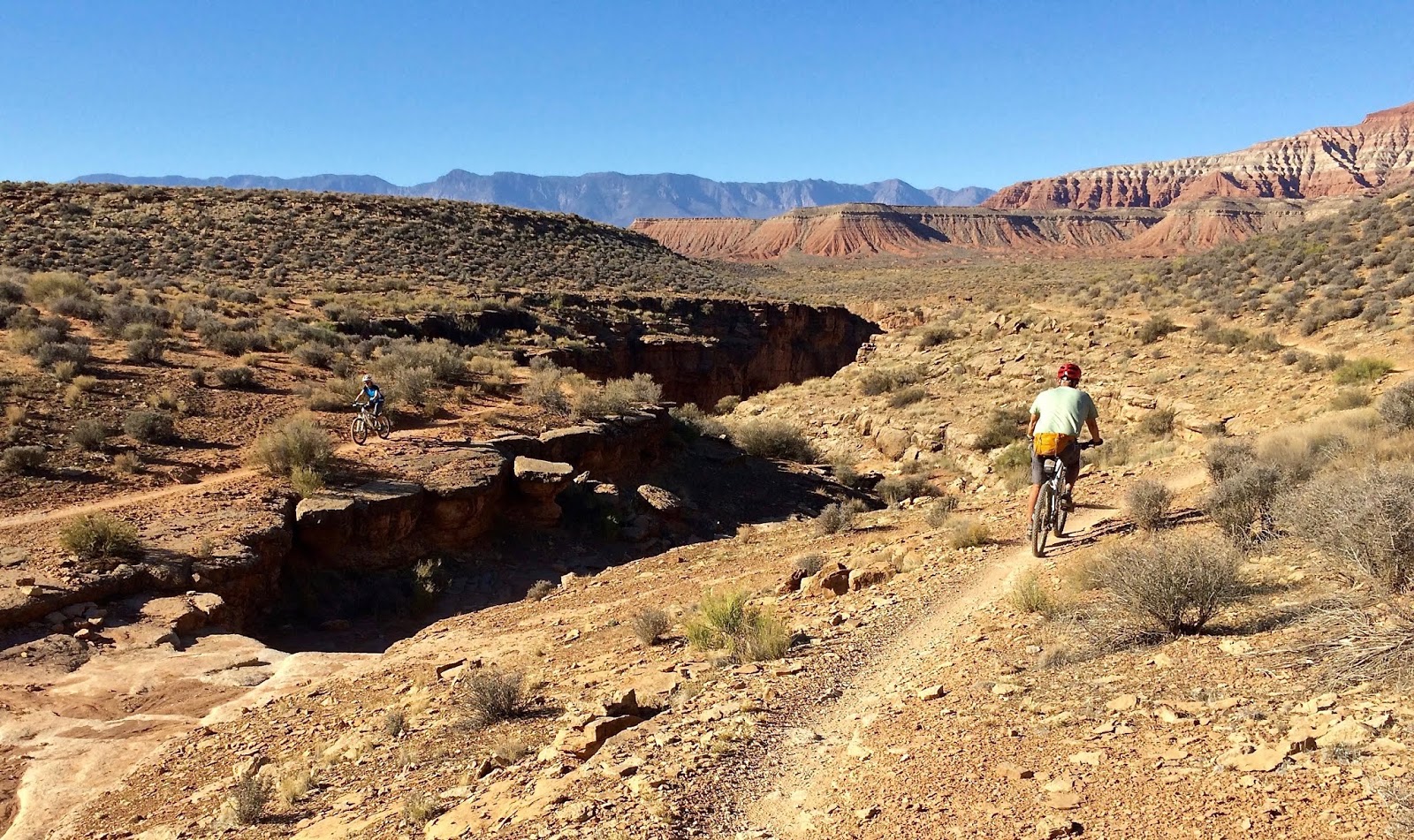 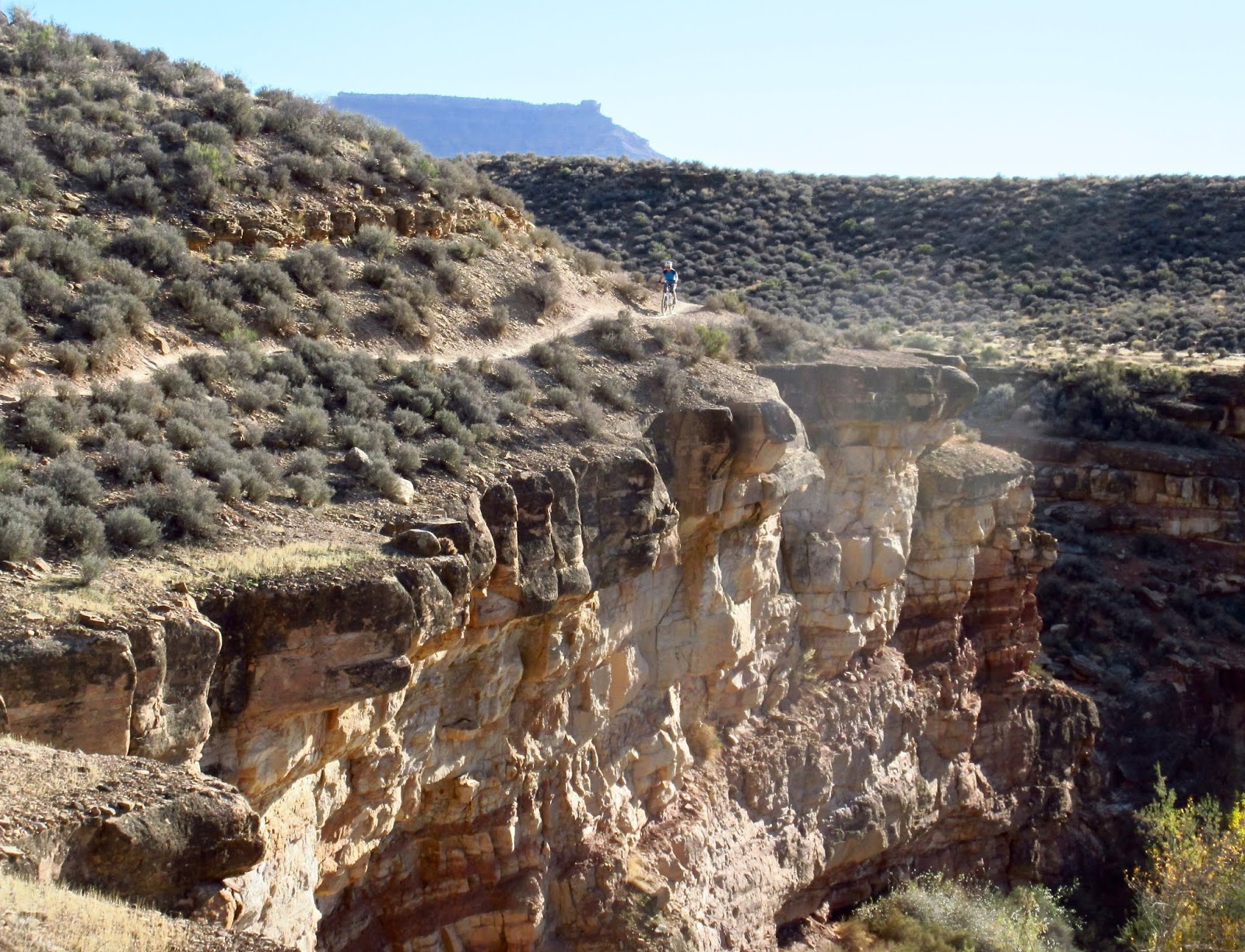 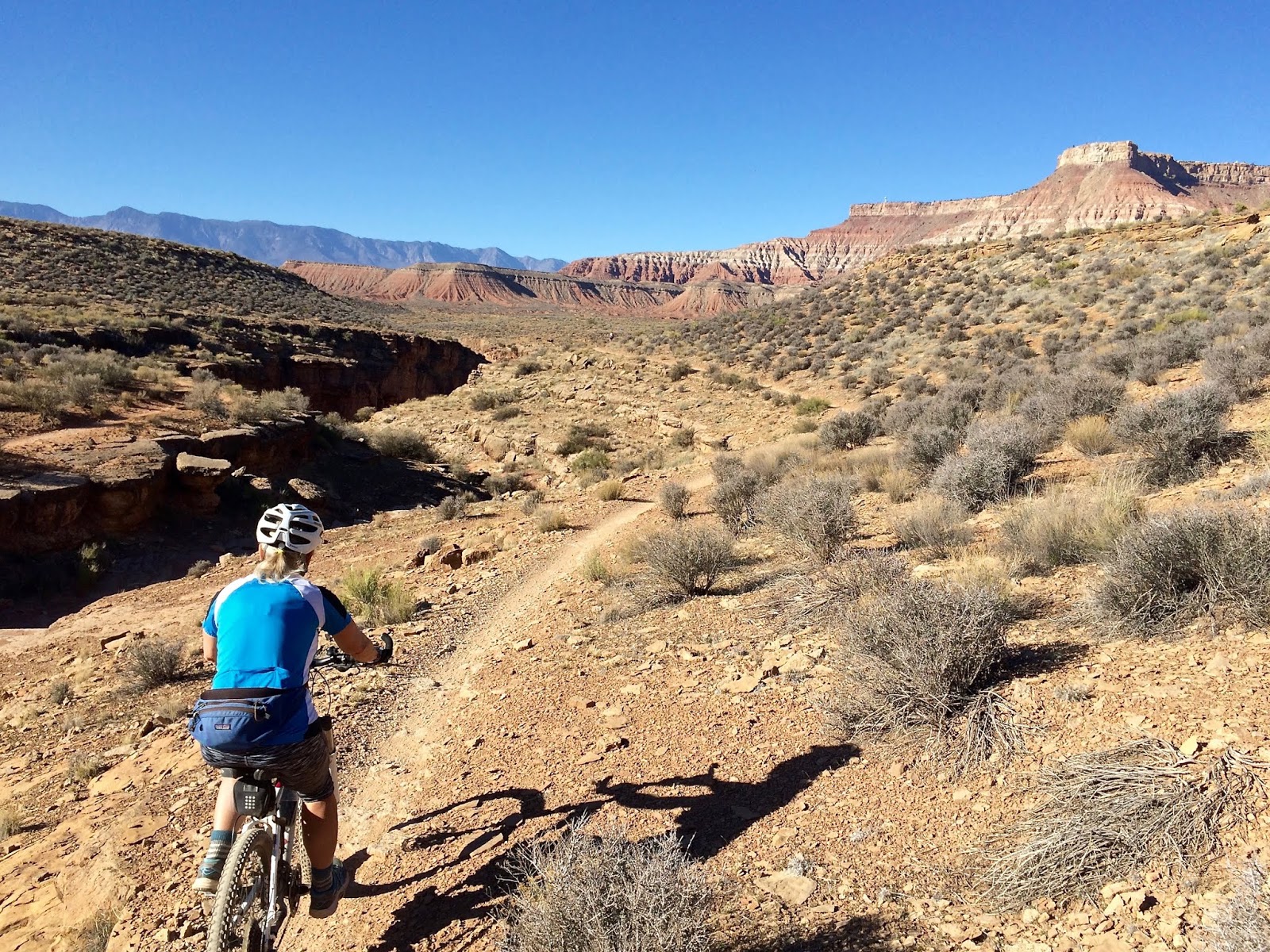 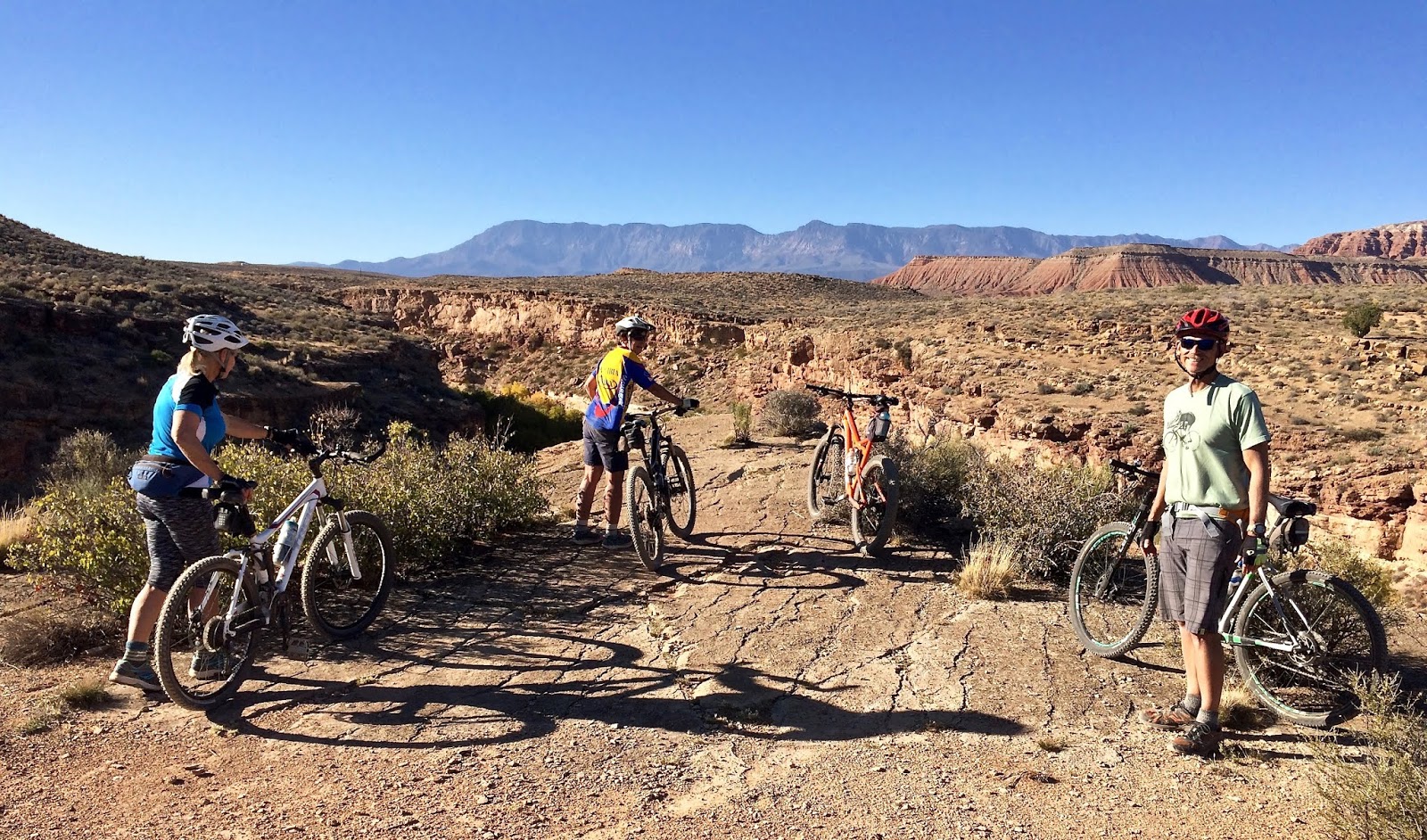 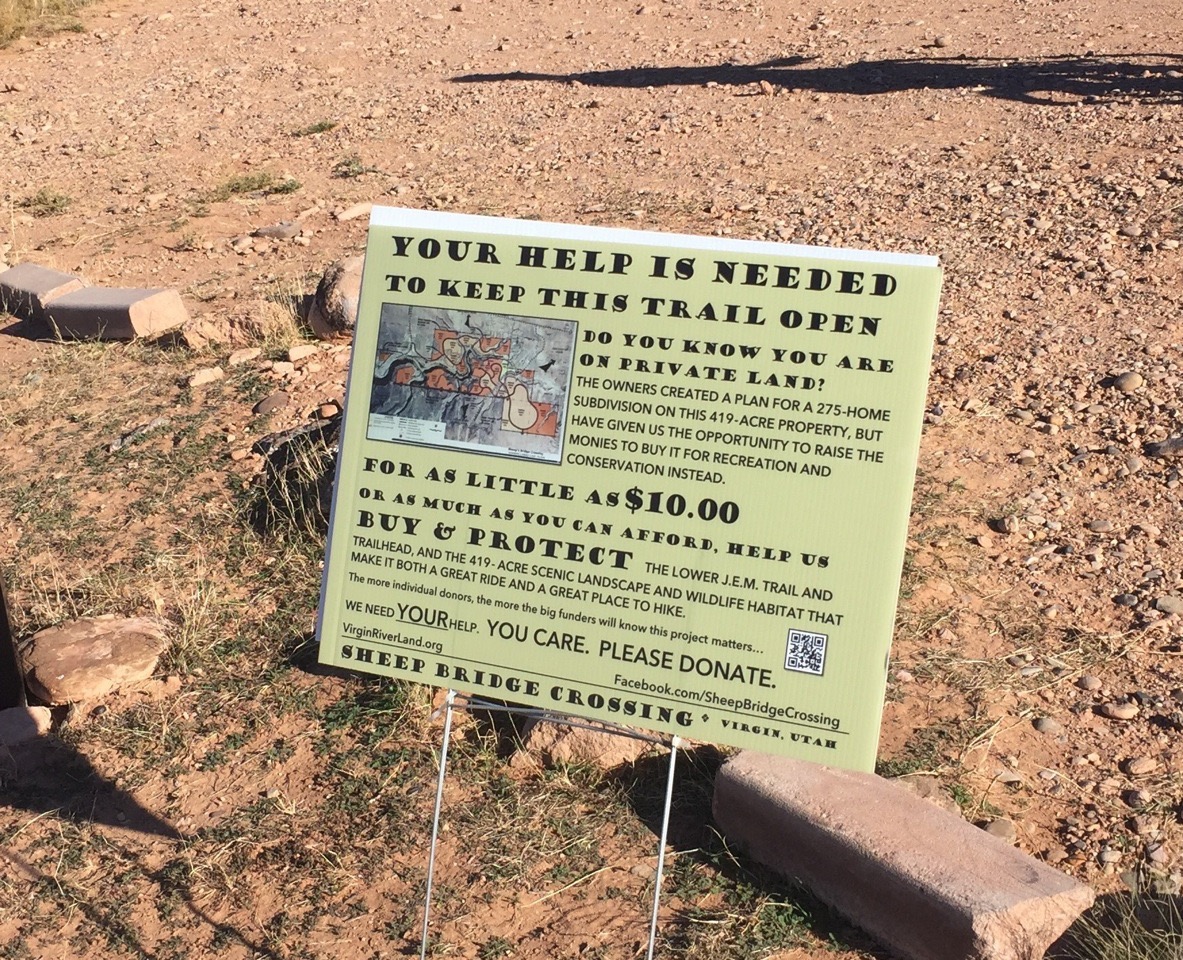 If you have more money than "things" to do with it, consider going to this website and lending a handout to a grassroots effort to purchase this prime acreage for preservation and posterity. Thank you!

Early in November, Zion hosts their annual Art Week, something we've enjoyed attending for years. We especially love to attend the painting demonstrations by professional artist, be they in watercolor, acrylic, oil, or pastel. 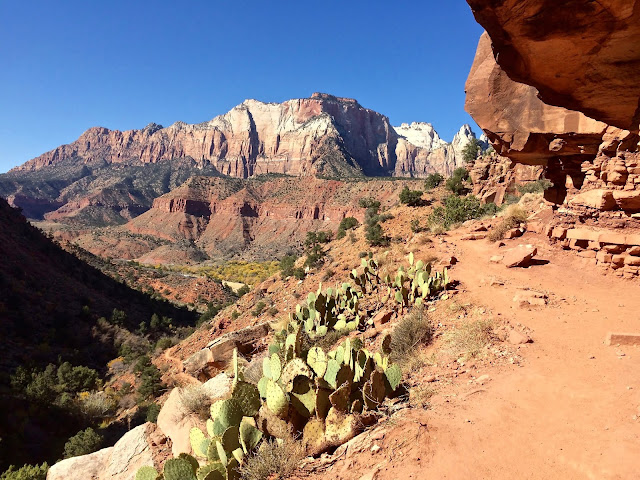 I was suddenly "hamstrung" by an injury to my left hamstring only a couple weeks into our month at Camp Virgin. It happened while hiking with Chris, Gayle and Bobbie up Owl Canyon in search of the elusive Mexican Owl.

It had rained a fair amount so there was still considerable water in normally dry creek beds and slot canyon pools. Trying to circumvent one of those pools (with a heavy pack) I attempted to step across a rather wide pool, thinking I could straddle-walk it and keep my boots dry. It proved wider than I thought, however, and I landed a boot rather awkwardly on the other side, at which time I felt and heard a loud "POP."

When I tried to throw body back across the ill-fated maneuver, my leg didn't cooperate and gave out. I more or less fell to the other side, laying in a crumpled mass of helplessness in severe, burning pain. It felt as if a tendon/ligament had detached from it's anchor point, somewhere deep within my left buttock.

Thus the second half of this year's trip was spent in considerable discomfort and frustration. Being Male and Stupid, I was not about to miss participation in the next day's JEM Trail bike ride with Gayle and Chris... or the day-after's hike...or the day-after-that's hike... and so on.

About a week later I was forced to take a day off, after which the pain was even worse. Painful as it might be, I decided to resume activities and pay the price, which I don't regret a bit. If it was serious it didn't heal, I'd break down (pun intended) and go to the doctor when we arrive home. I couldn't bear the thought of laying around camp (I couldn't sit) while everyone else was out having fun. (Reflecting back, I made the right decision as I'm slowly healing. Happy I was able to avoid the Doc, a barrage of tests, MRI's, X-rays, Physical Therapists and, perhaps worst of all, REST.) 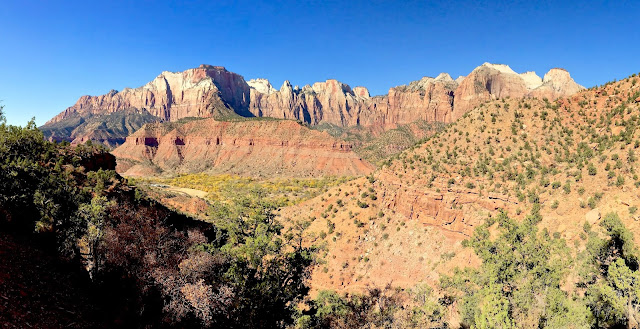 Before one of the Demos, Bobbie and I did a leg-stretch hike up to the Watchman Trail overlook... 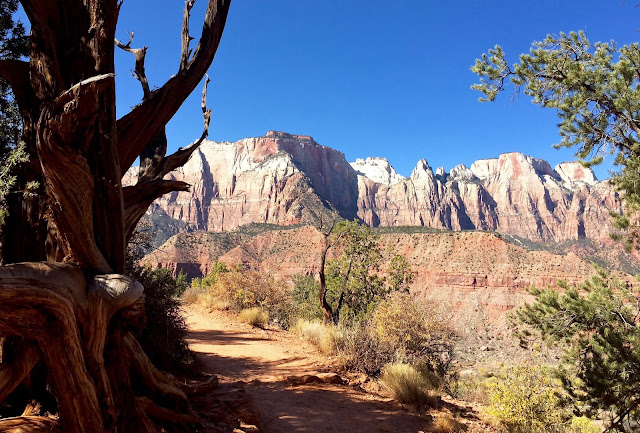 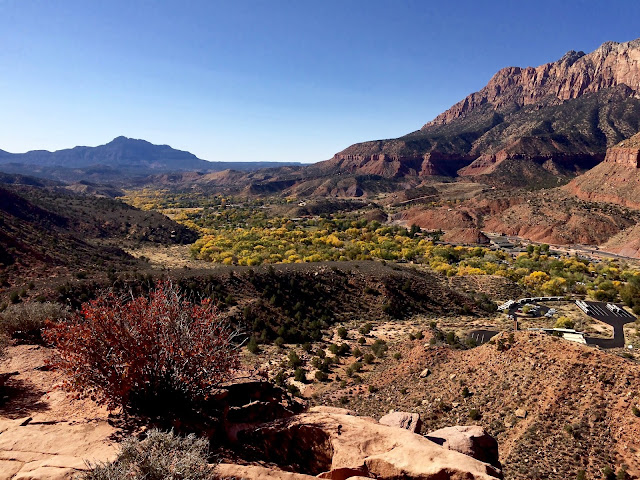 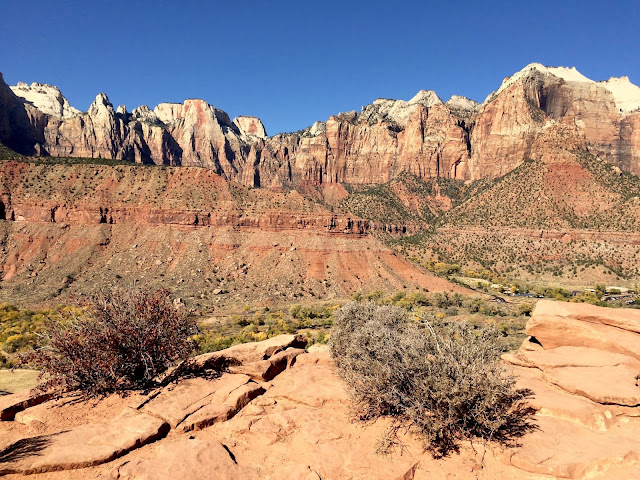 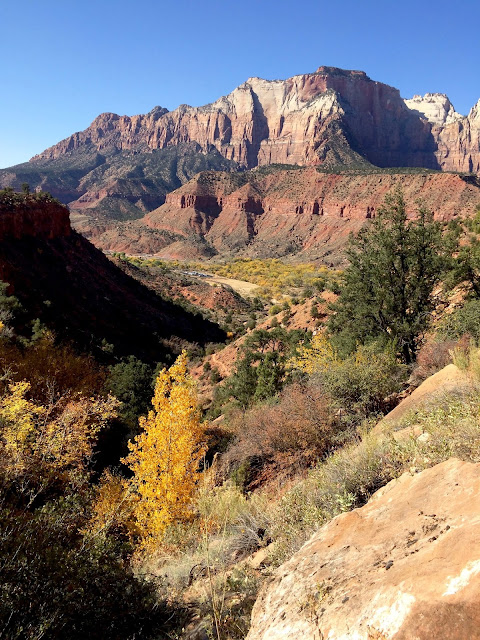 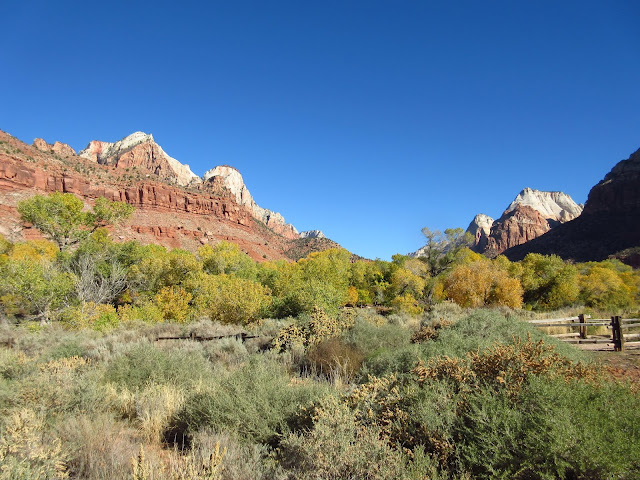 Once back down we took the Par'us Pathway to the Zion Museum and attended two Demos on an outdoor patio with a sprawling view of Towers of the Virgins. 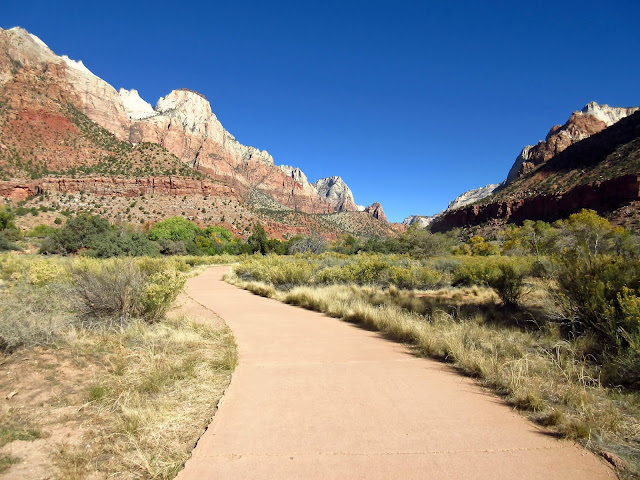 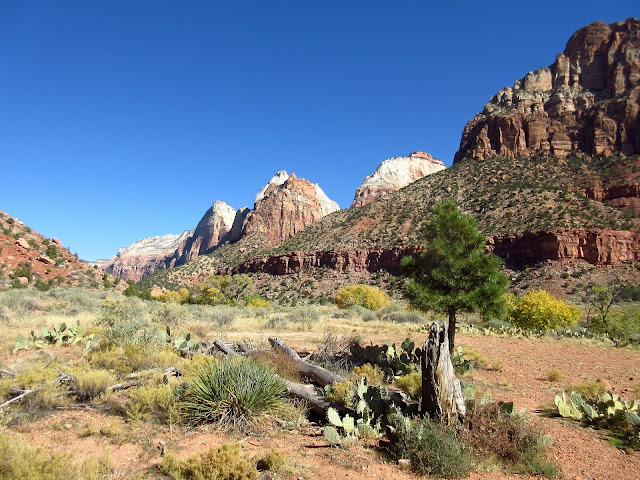 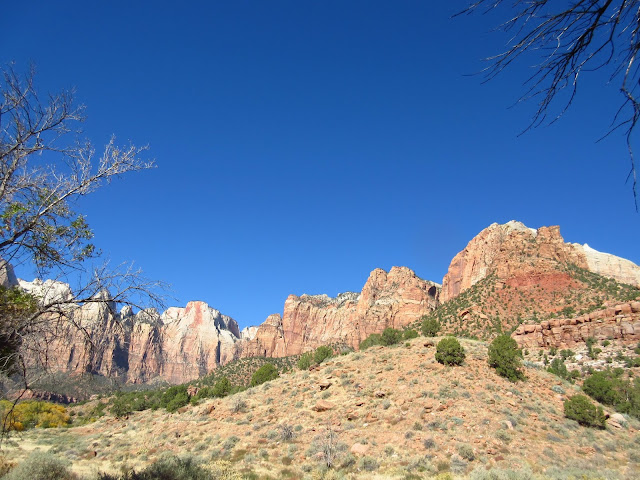 On another Post-It Note... Bloggers Hans and Lisa of Metamorphosis Road fame recently transitioned from full-time Rving to a lovely house on 1.6 acres in/near Prescott, Arizona. It appears to be a beautiful place in a "what's not to love" 4 season climate and location. We wish them well and look forward future blog posts from the "other side" of an Rv life. Meanwhile, full timers Jim and Allison (Allison's Post Work Thinking now that I have time to think) recently stowed the motorhome and moved into a nice house near Saguaro National Park on the western outskirts of Tucson. A series of mountains stand between them and the big city and offer endless miles of trails right out their back door. While not exactly a 4 season locale (summer temps can range from 105 to 112 or more degrees), winters are near perfect. In fact, Tucson is the area where we boondock most of the time January through March.

Over the years (decades?) I've observed with interest the transition (stampede?) from "sticks and bricks" to full time Rv living...which, nowadays means "mobile homes" that range from Prius's to vans to utility trailers to mega motorhomes with 6 slide-outs, in floor heat, granite countertops, marble floors, his and her Harley's on the back and a Hummer in tow...all custom painted to match.

Without belaboring this Post Script Post-it Note, I'll try to get to the point in as few words as possible...

Any full time Rv'er is probably already aware of the building tsunami of people selling their houses and hitting the road. Campgrounds, be they Forest Service, State Park, National Park, National Monument, County Park or private Rv park, more and more require reservations months to a year in advance in order to nail down a campsite. The past couple years Bobbie and I have found most of our formerly "secret" boondocks have been discovered. We arrive now and find dozens of rigs instead of one or two. Let's face it, the Rv industry is red hot and it doesn't look like a cool down is coming anytime soon. "Seeing the USA" seems to be on everyone's Bucket List.

Where the primary age demographic was once senior retirees, now it seems like every age group is jumping on the mobil lifestyle bandwagon. It's not unusual to find entire families with two or three kids and a couple of pets living on the road, and most seem to be "boondockers" like us.

Camping is now a competitive sport. More and more campgrounds are going to a reservations only format. And boondockers, well guess what? You better face the new reality that neighbors will squeeze in alongside your rig, run loud generators, play loud music or Tvs, turn kids and pets loose to run amok, and there's no place to hide anymore. They've all been discovered.

Given this new reality, I'm thinking (hoping) there might be another tsunami in the works: the reverse migration of full-time Rv'ers back to sticks and bricks...at least for the ones who haven't blown the "nest egg" and have enough money or income to have that option.

I don't want to be a killjoy for those awaiting their turn to "hit the road." It's just that good things don't last forever, and I think we're on the downhill slide when it comes to quantity and quality of Rv life. I can see a time coming when Bobbie and I just stay home during wintertime...maybe take a couple trips to Arizona and stay in a hotel.
What say You?

The view from our living room... 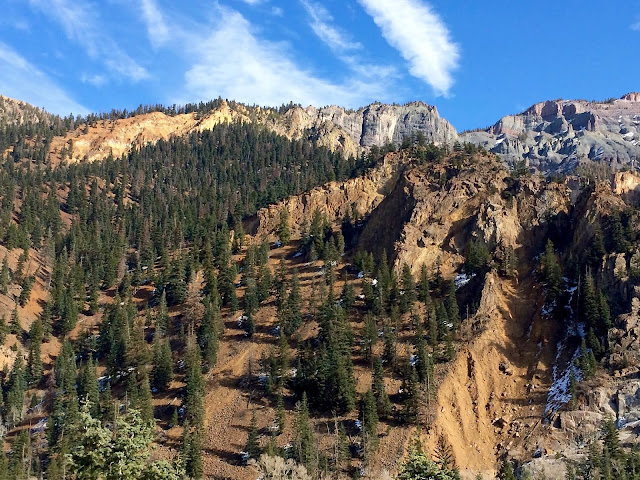 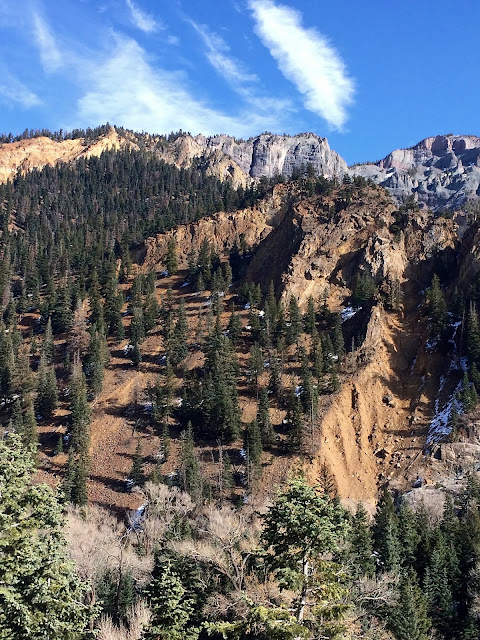 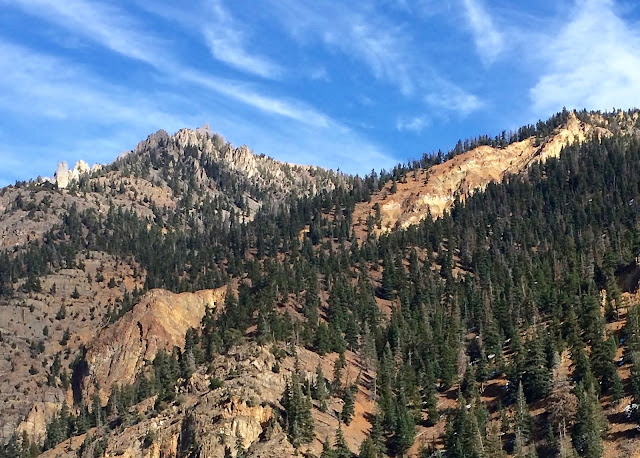 Stay tuned for more "eye-candy" adventures from Southwest Utah.
Peace out from the Johnson Family Reunion in Toledo, O-hi-O.
mark and bobbie
Posted by Box Canyon Blog.com at 5:40 AM