Break On Through Conclusion: Plus a digression on "How we are loving our favorite National Park to Death" 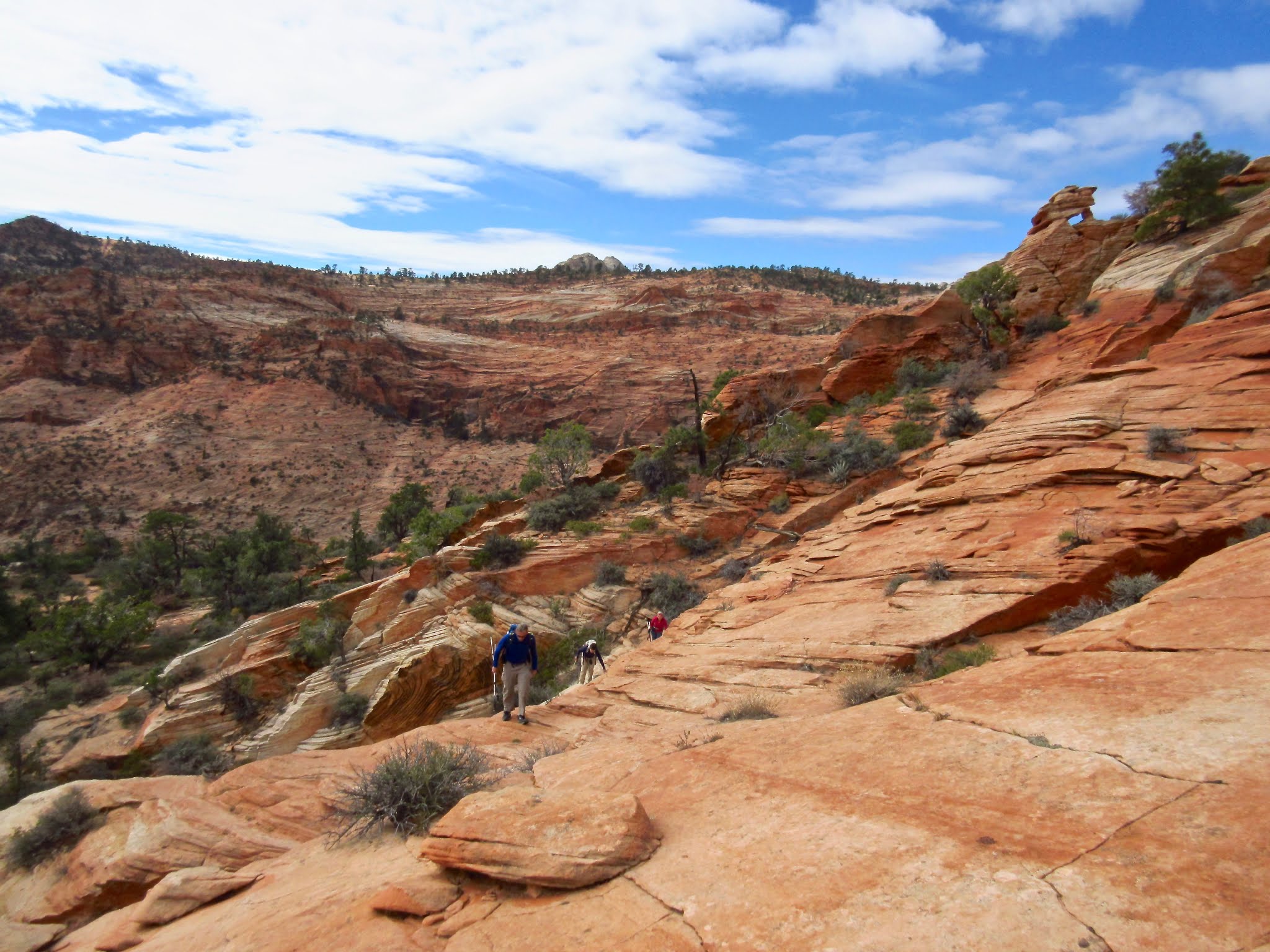 Last you read, a foursome of bewildered over-the-hill Geezers were four hours invested in a farcical attempt to orienteer a wilderness back-country loop-route around "the mountain."  Why? Because two of us knew it had been done before, and because it was there...like, defiant and thus oh so tempting.

After a pleasant cliff-side lunch, operating on gut instinct and by seats-of-pants, John, Charmaine, Bobbie and yours truly, navigated a way down from our perch via a series of cliffs and into "the canyon" that stood between us and "the mountain." A pervasive "we can do this" kind of optimism was evident in our giddy trail chatter. But as time and miles set in, and lunch wore off, and ole Sol began to cast elongated  shadows, exhilaration morphed from statement to question and Conviction ebbed to concern.

Wilderness can be intimidating. Mountains and wild places demand respect, because, as the adage goes, they don't care if you live or die. People often ask, What if you get seriously injured way out there? The question is valid, as there is generally zero cell service among mountains and canyons we most love to explore. One misstep or wrong turn can turn a fun outing into a rescue and helicopter ride.

Not to be callous or caviler, but to me risk is an inherent component of a life well lived. I am in full philosophical agreement with Hunter S. Thompson: Life should not be a journey to the grave with the intention of arriving safely in a pretty and well preserved body, but rather to skid in broadside in a cloud of smoke, thoroughly used up, totally worn out, and loudly proclaiming "Wow!"

Look, the good ole days are gone; we live in a short-tempered world nowadays where a single deranged zealot can wreak carnage on innocent bystanders...men and women and children going about their day at work or school, concert goers, bars, theaters, malls, churches, parks, offices, parties...anywhere; it now happens everywhere.

Add to that growing "risk," road rage, device-distracted and/or drunk/high drivers, and, well, I kinda like my chances in wilderness settings. That said, an emergency satellite device is slowly working its way up the priority list. Maybe by my 70th birthday it will reach the top...if I make it to 70, that is. Yeah, Old Grim...you never know.


The upside of back-country exploration is when one stumbles across secrets it holds for those willing to risk, things like mind-bending color, dazzling anthropomorphic formations, and hundreds to thousands of square miles of emptiness with few to none in the way of Human Beings. Unless, it now seems, you happen to be in a National Park.

Bobbie and I were gobsmacked with a sense of utter disbelief the first few times we visited Zion's Main Corridor. There were no shuttle busses in those days. In fact, we could find parking at any trailhead we chose...even on weekends. But years trip by and so, too, the escalating number tourists pouring through the turnstiles, nearly doubling 2007's 2.5 million visits to 4.5 million in 2017.

As with any "civilized society," more people means more rules. Regulations are implemented: shuttle busses, hiking permits, parking meters (@ 20 bucks per day), and so on. Still, undeterred by crowds, they come...enduring long lines at entry stations that occasionally back up through Springdale for miles, and gabby throngs of trail people...some of which, you discover later, have crept into almost every single one of your photos, along with the tourist helicopter that flies overhead.

Even with huge crowds, Zion's main corridor allows visitors an opportunity to experience true astonishment at its sheer cliffs and improbable trails. The price paid today is a "sardine can" shuttle bus ride, nuts to butts with a hundred other tourists you never wanted to have such intimate contact with. As John pointed out to me on the trail after I mourned the loss of "good ole days," It's good that people are getting outside and seeing the wonders of nature. He's right. In those numbers, perhaps, lies future preservationists and the salvation of wilderness.

At 4.5 million visits per year, Zion remains a solid number 3 hold on the list of "most visited" National Parks. It will soon overtake Grand Canyon's 5 million visitors. Parking spaces and shuttle bus seats in Zion are fast becoming competitive events. It seems solitude, along with breathing and elbow room—the very things we seek from National Parks—is fast becoming an endangered commodity.  Think about it. Well over 330 million tourists visited our National Parks last year. With the USA's population at 325 million, well, that's both a compelling and telling statistic.

I can't help but wonder what would Thoreau think of how we've devalued National Parks into Disney-like amusement parks, transforming the guardians of Nature and solitude into "drive-by" thrill-ride experiences. It's oxymoronic—hiking lockstep in a long procession of fellow humans in search of peace. How silly and counterproductive is that?

In her "What a Body Knows" column for Psychology Today,  Kimerer LaMothe, Ph.D. writes that Thoreau "was concerned that the obsessive-consumptive habits of society were dulling people's senses and enslaving them to a quantity and quality of labor that failed to nourish their best selves. As he lamented, 'The better part of man is soon plowed into the soil for compost,' with predictable results. While the production of goods and services and the technological mechanisms for making and marketing them all flourish, individual humans don't. Depressed by the sense-numbing pace of life, people crave distractions from expensive entertainment that tie them ever more tightly to their treadmills."

If you can't go to a National Park to escape life's "sense-numbing pace" and "treadmills," then where?
I digress...

Where was I?  Oh yeah: 5 hours in, cliff-hung by a slot canyon and in search of a way up or around and out of a situation that was inching toward "predicament."

John's previous down-mountain reconnaissance foray hadn't revealed a slot canyon dead end. All he saw was a thin dark shadow cast by low sun against the undulating landscape, and thus didn't consider it worthy of further investigation.  With his assurance, we climbed down, down, down till, bingo, there was a slotted impasse... too wide to jump and deep enough to kill you if you failed in your attempt.  Rather than admit defeat...turn around and start backtracking like I thought we should have...the optimist in our group thought we should continue on... ascend to a nearby highpoint, a molehill, in reality, in order to survey the landscape for a possible way around the slot. Okay...

The problem with route finding in steep, "cliffy" terrain is that you can't always see what lies beyond the next rise. The only way to know if it's passable is to hike down and have a look, which invariably leads to yet another rise you can't see beyond, and so on. This hike was beginning to remind me of Wiley E. Coyote's misadventures, fast becoming a classic example of how to dig a hole deeper than you can escape and end up digging till the bottom falls out and go sailing into a canyon. If not careful, we could find ourselves holding a flashlight instead of hiking poles. This reminded me to see if I even had one in my pack. Whew, I did...and it worked.

Meanwhile, the weather gods continue to spit... (really gods? what good are you?)

Long story shortening now, remarkably, we managed a way around the slot; it involved some all-fours climbing and clinging to dead vegetation, but, as they say, desperate times call for stupid measures...or something like that.  When we eventually topped out on a ledge level enough to stand up straight, we spied a nice sized herd of bighorn sheep. 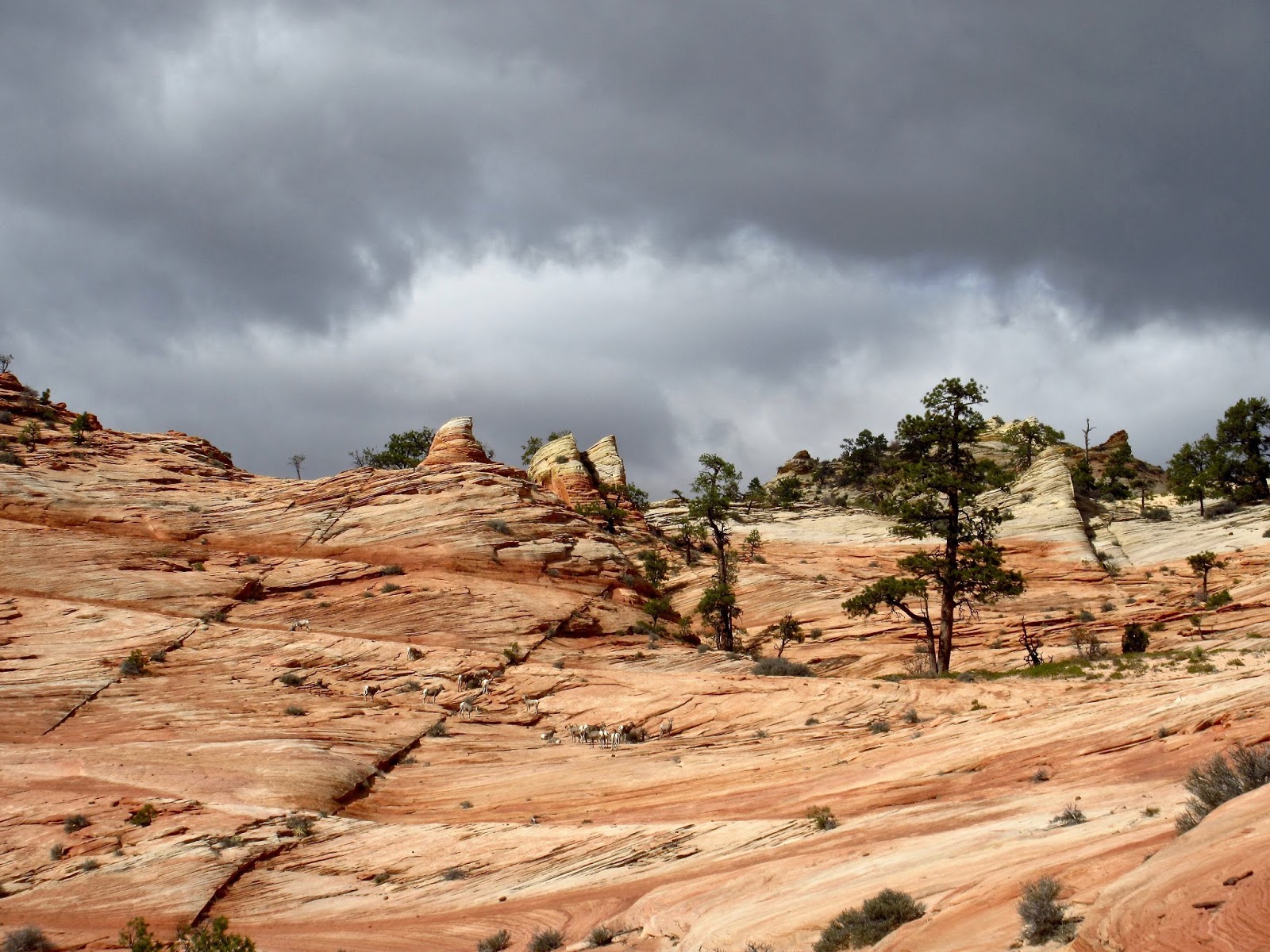 Under dark clouds and spitting rain, the afternoon slip sliding toward dusk, we fist-bumped at our success in negotiating a route around "the mountain." Bobbie and I were on familiar ground at that point, and knew of a shortcut route back to the car via another yet one more "pass." 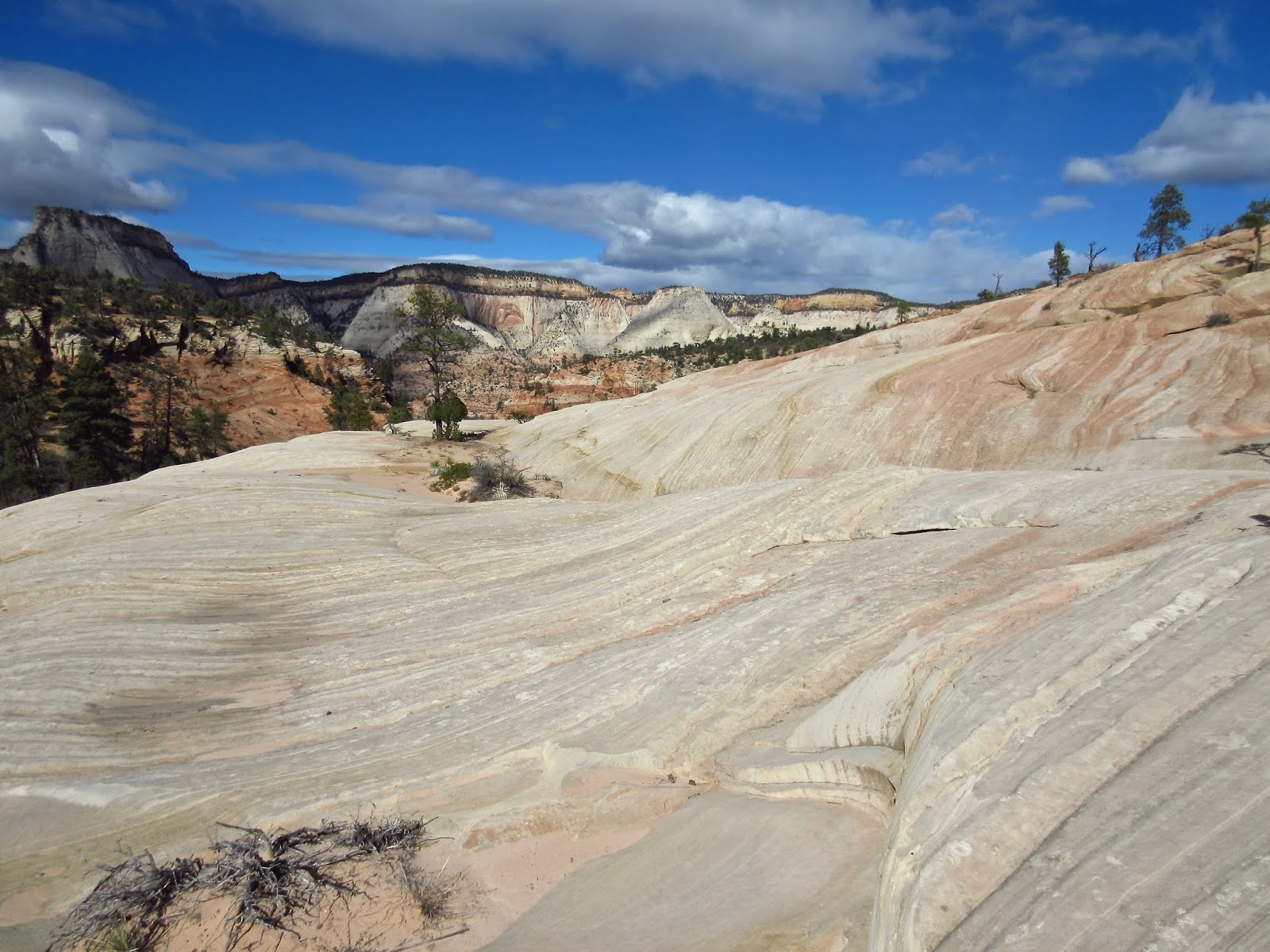 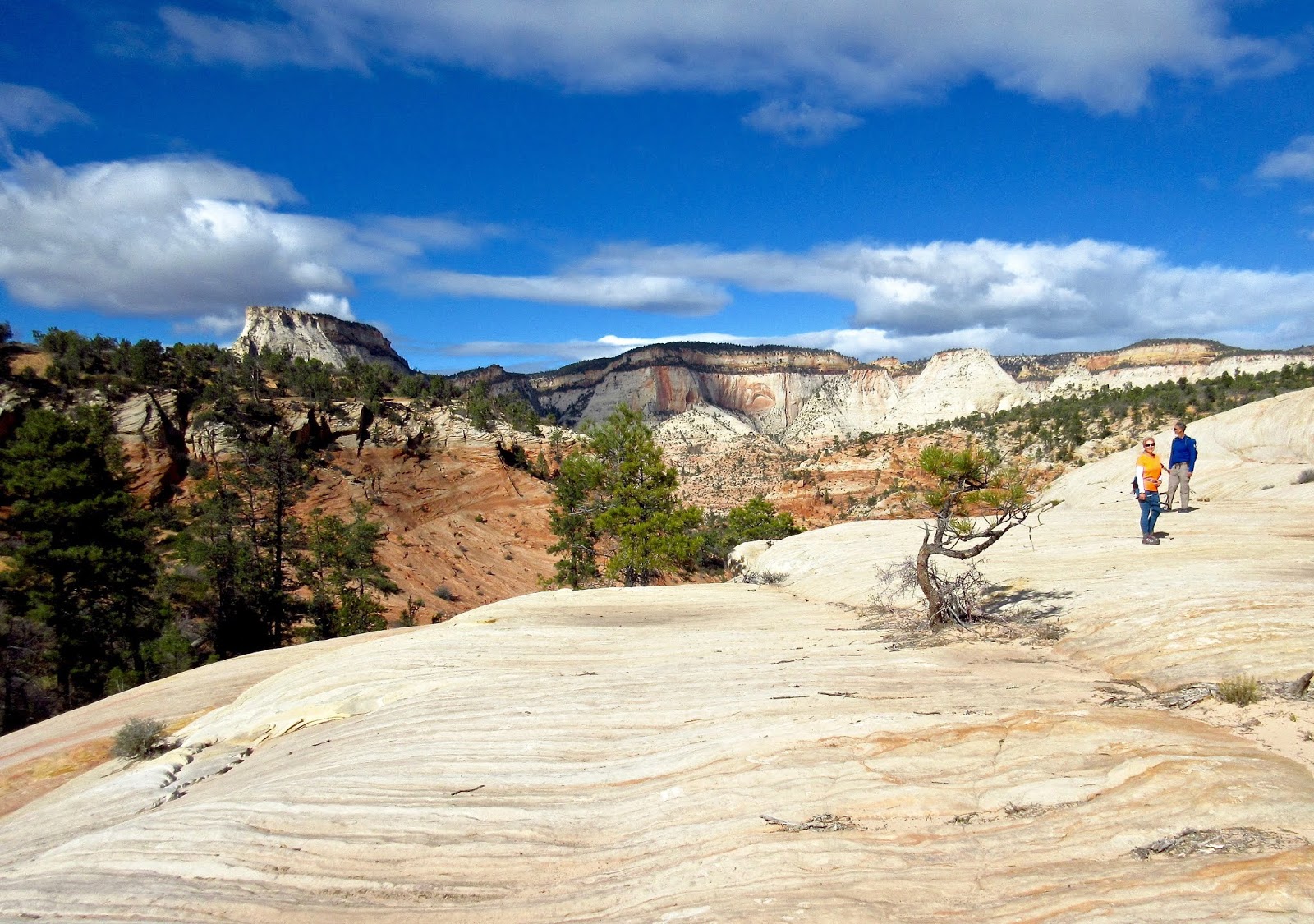 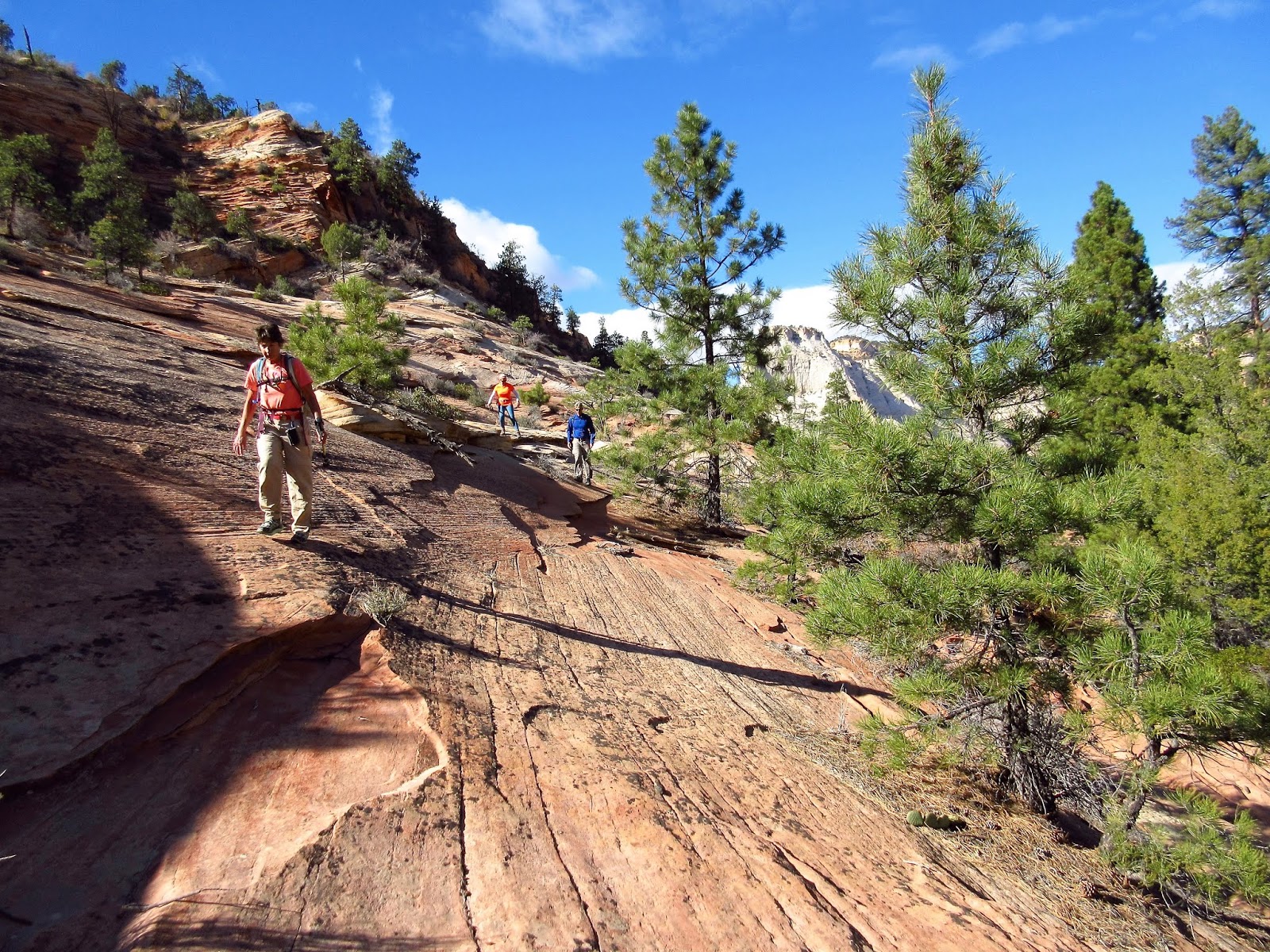 Six and one half hours from start, we removed sore feet from sand filled boots and slumped into the comfort of our cushy carseats. A happy ending to an epic back country Zion adventure, where we saw nary a soul...

Peace out,
mark and bobbie...along with "full timers" John and Charmaine.
Posted by Box Canyon Blog.com at 9:54 AM