Martha drops by, and Leon swims two lakes on one hike... 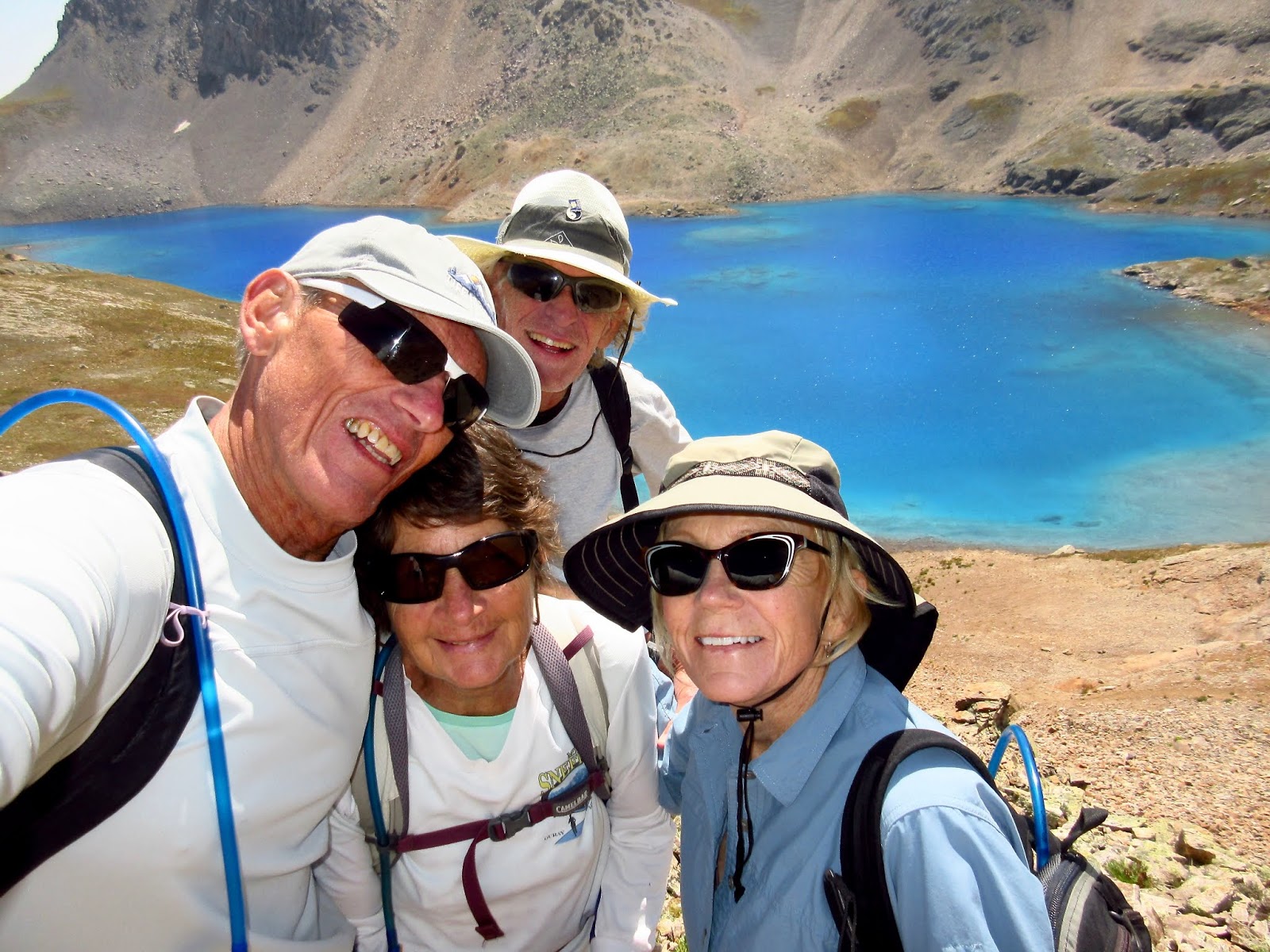 Last week a longtime friend, Martha, came up from Albuquerque to spend a week with her daughter in Montrose. It had been a while since Martha had hiked a mountain, let alone above timberline. So she called Bobbie. Who better to call for an alpine "fix?"

Not wanting to kill her on one of our "Dubious Duo" footslogs to Hell and back, we opted for the meandering visual feast from Bullion King Lake to the oh-so-blue Columbine Lake. After reassurances that we would be home in time for Happy Hour, Leon decided to join us. It had been a couple years since he had gone for a dip in an icy-lake, and this hike offered a rare opportunity to notch a "twofer." And we're off... 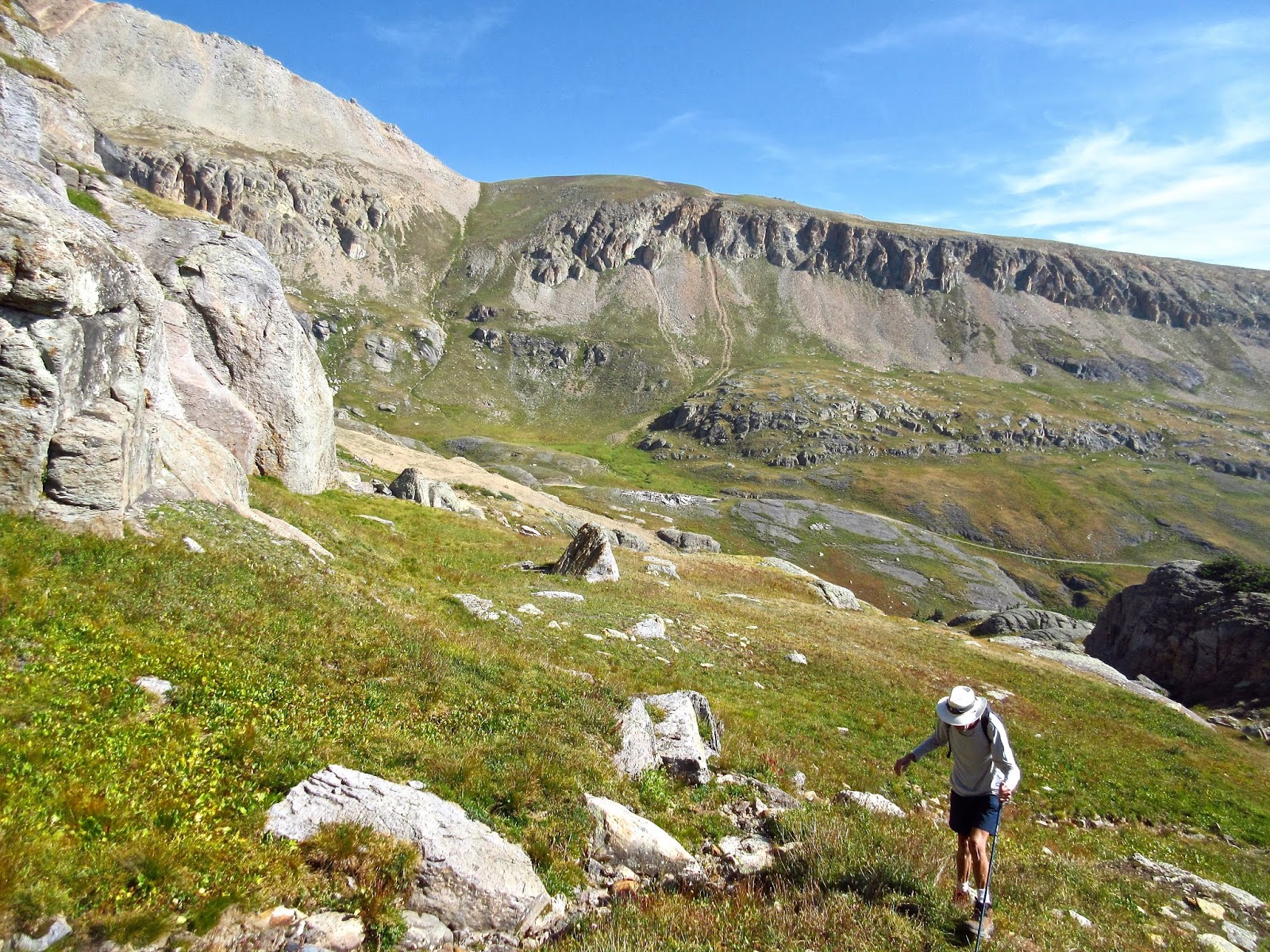 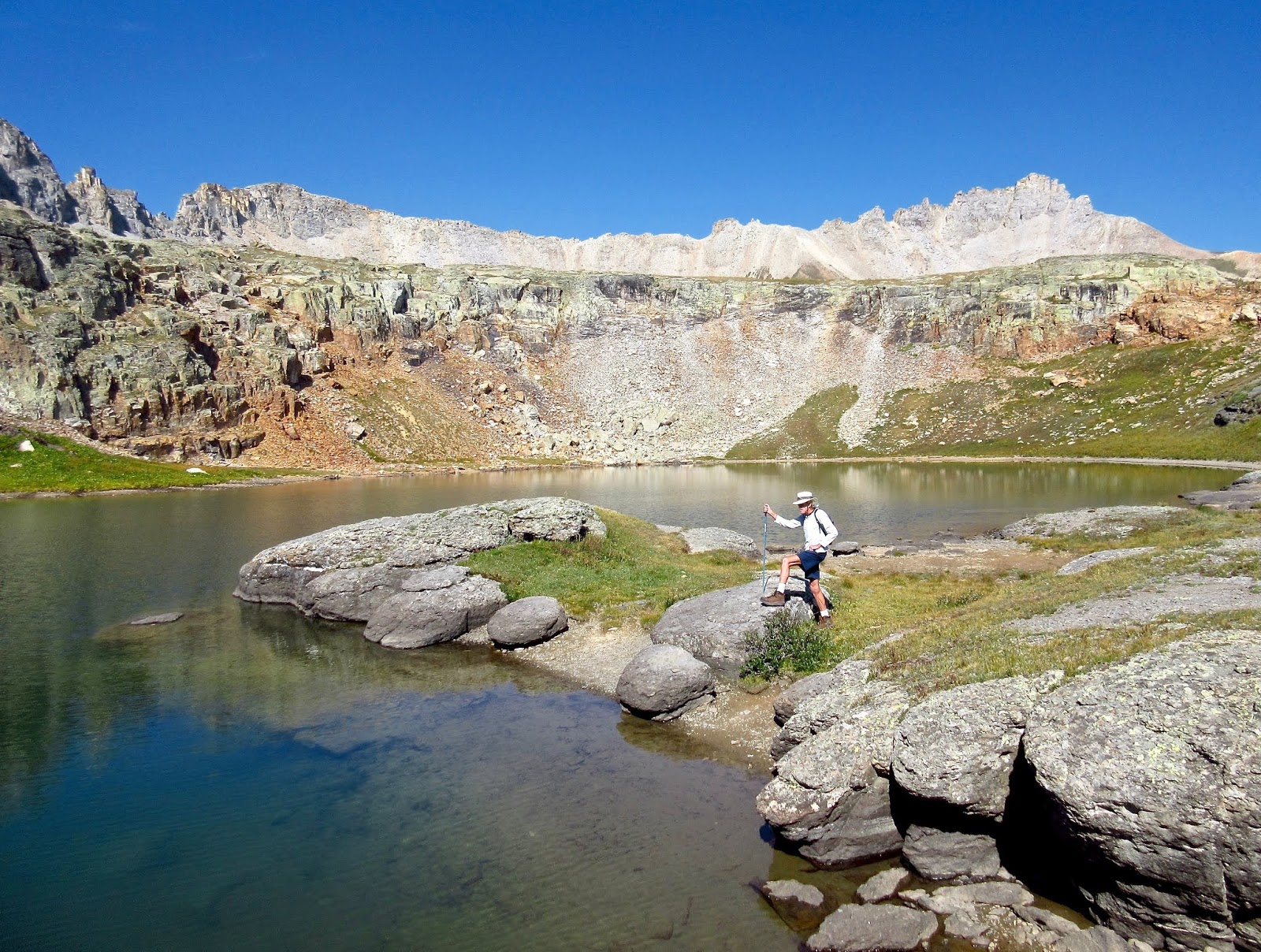 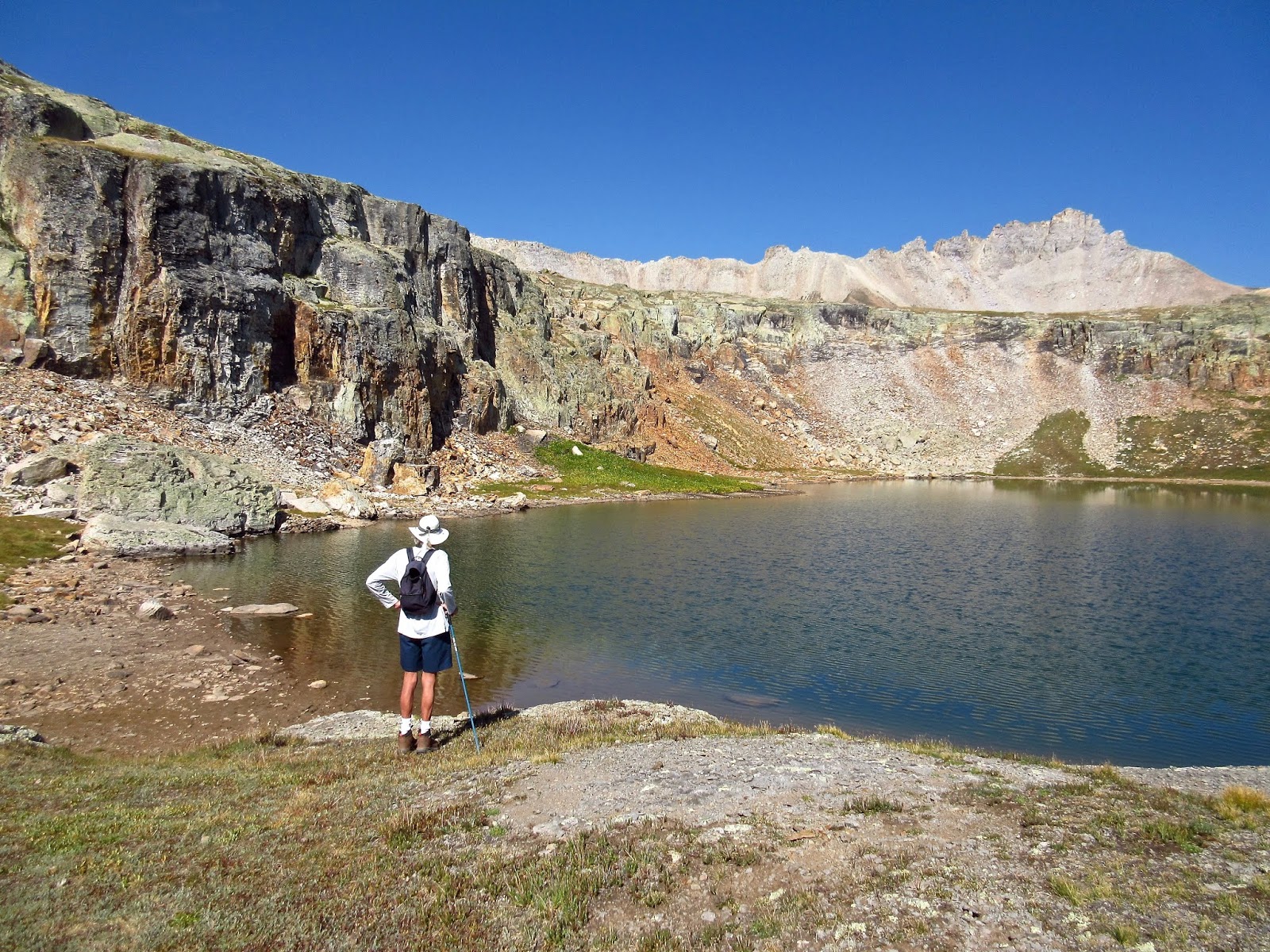 With most kids back in their holding cells, we had an almost solitary hike. Resting easy at the foot of a picturesque cirque, Bullion King Lake seldom disappoints passers by...nor fisherman, for that matter.

Temps were a tad chilly for a morning swim, so Leon decided to catch Bullion King on the return. Besides, we had some "work" to do if Martha was to lay eyes on Columbine Lake's insane blue-ness. Thus began our slow climb up and out of Bullion's Bowl. 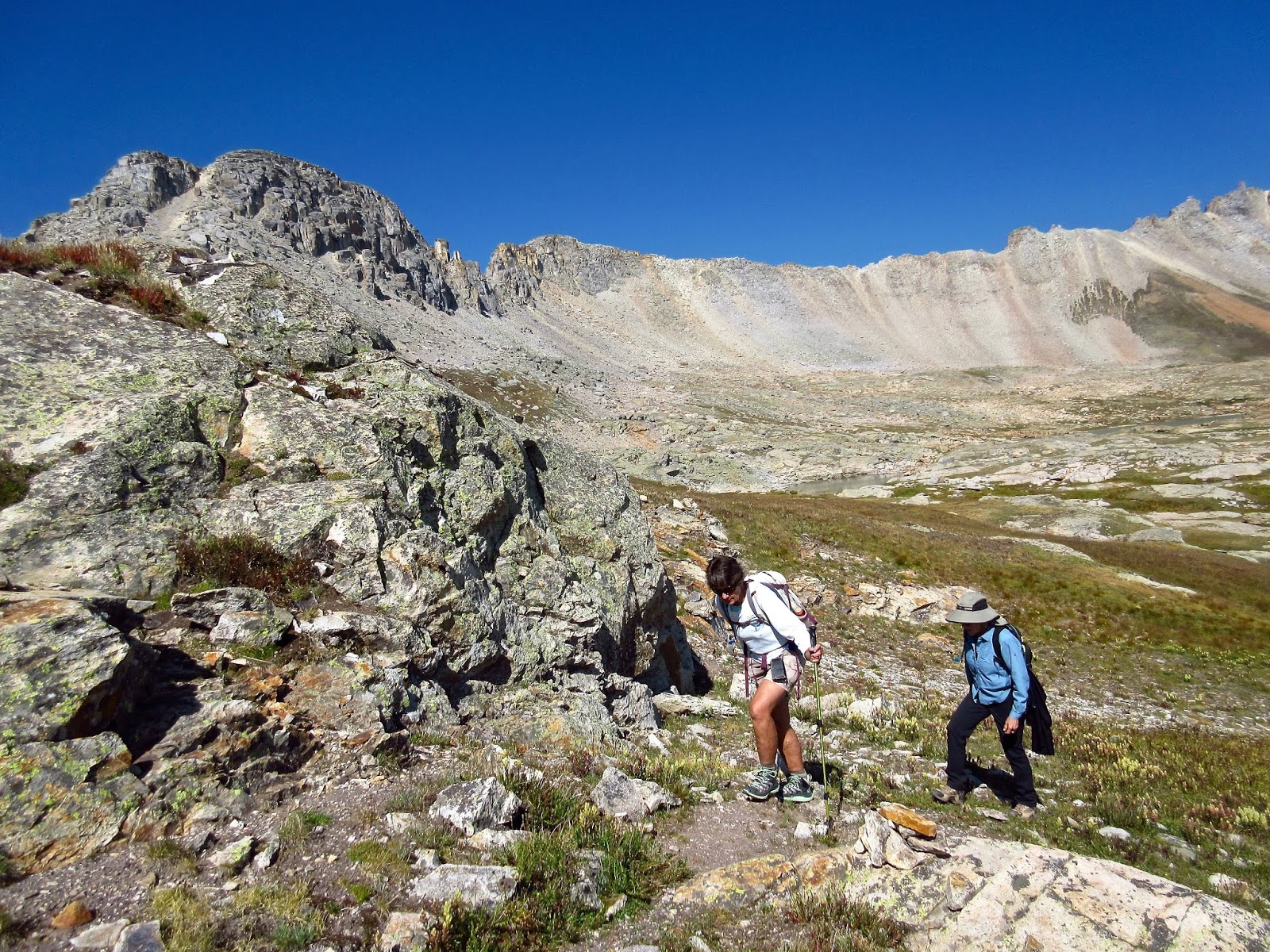 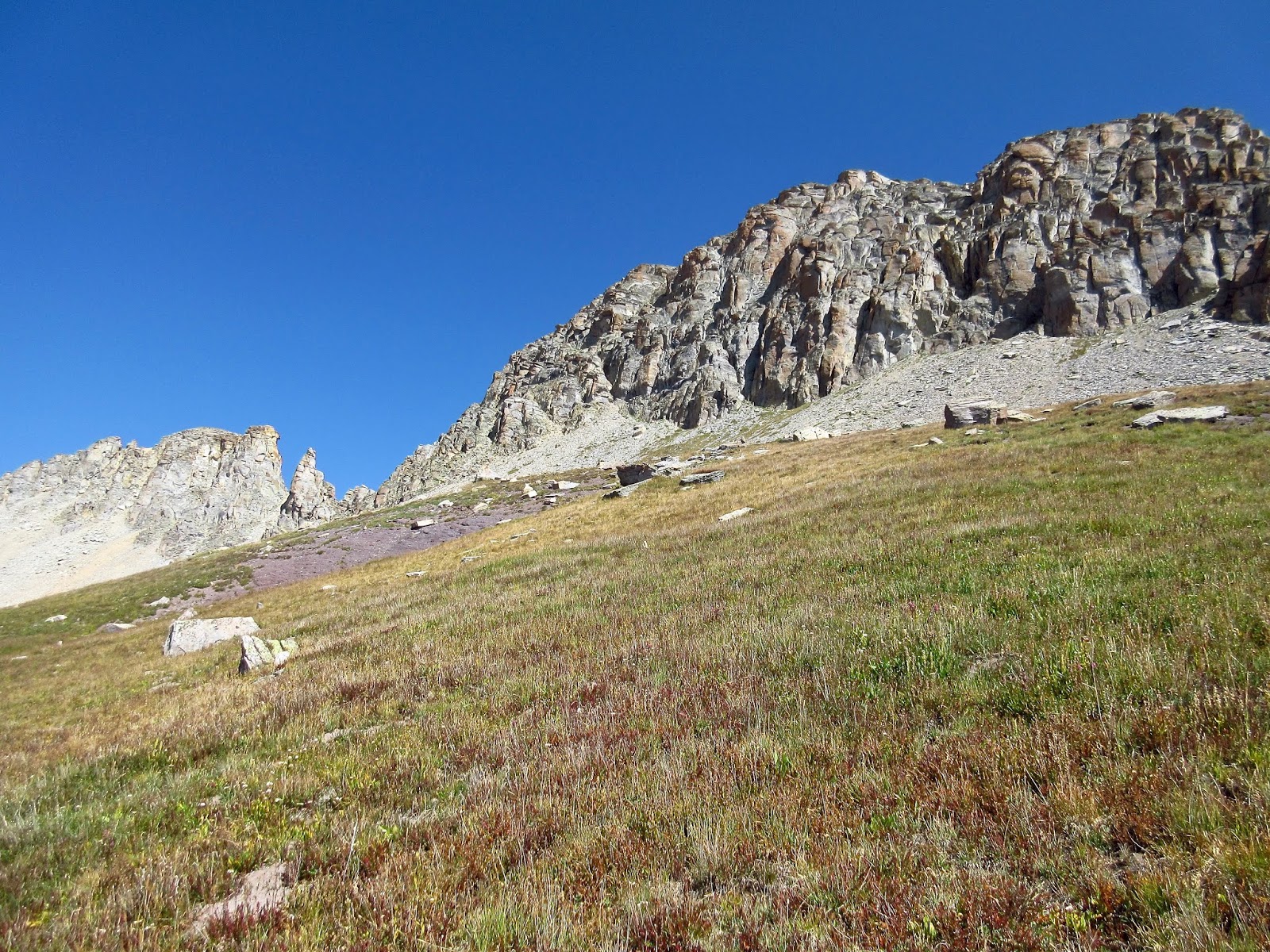 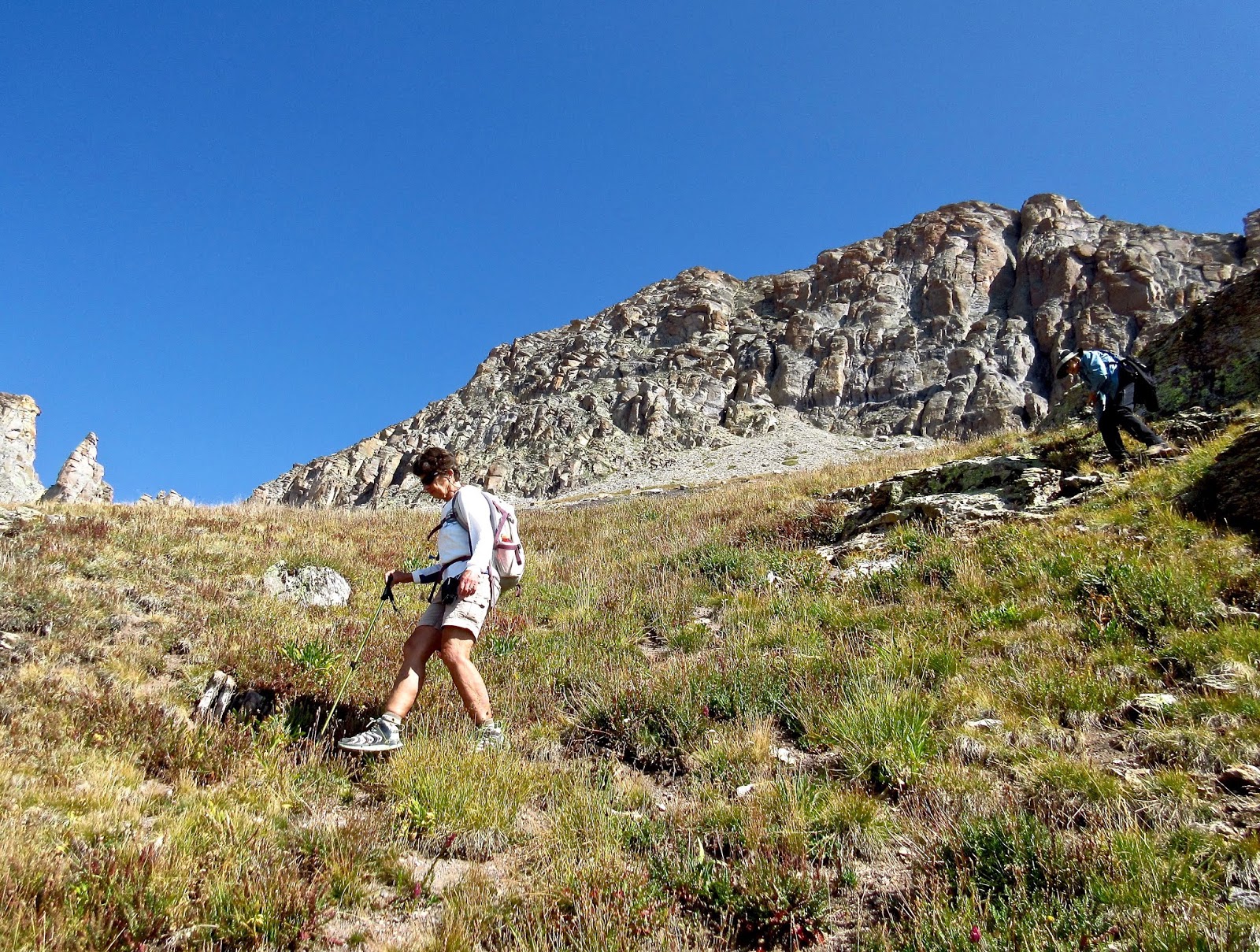 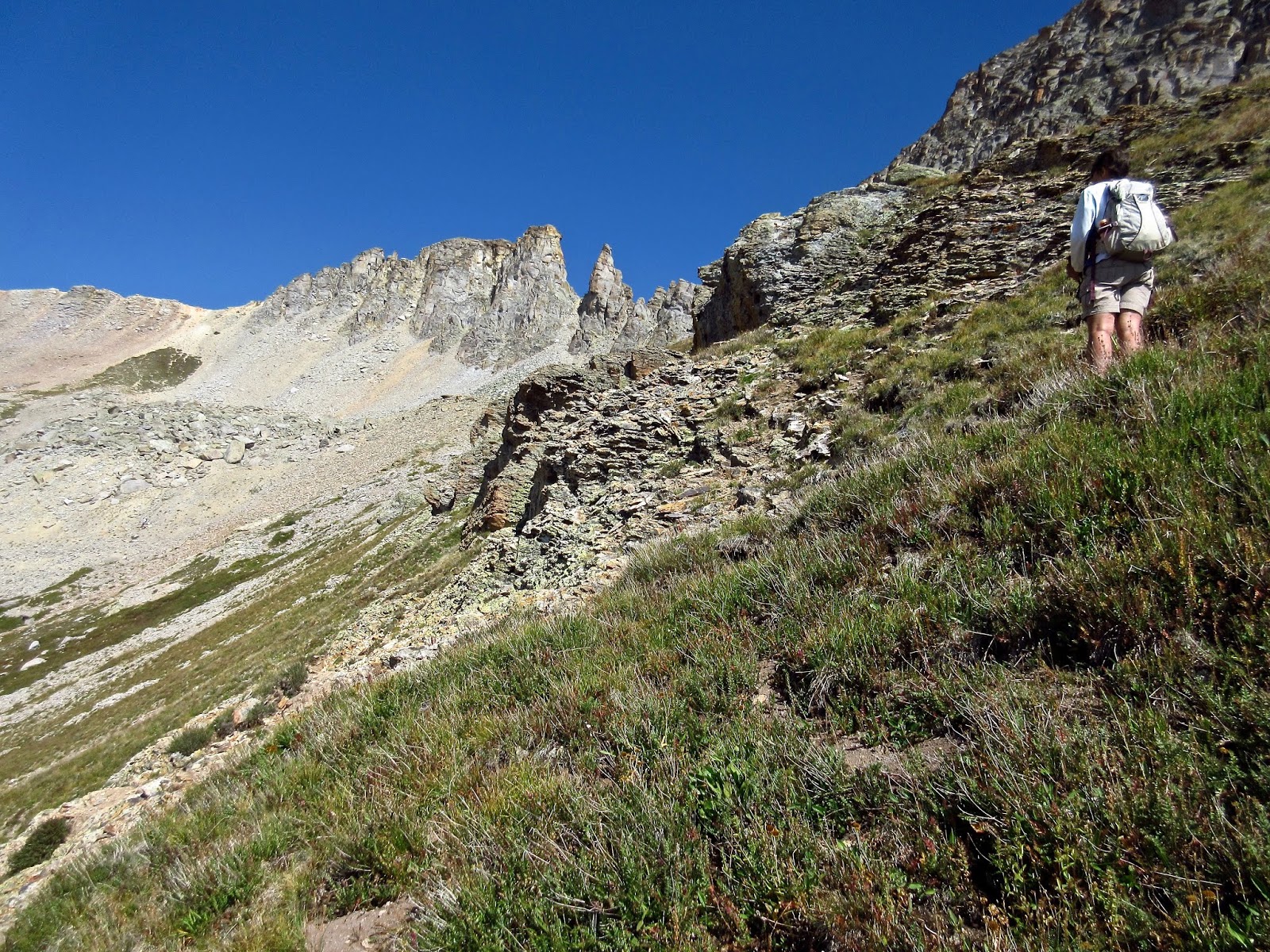 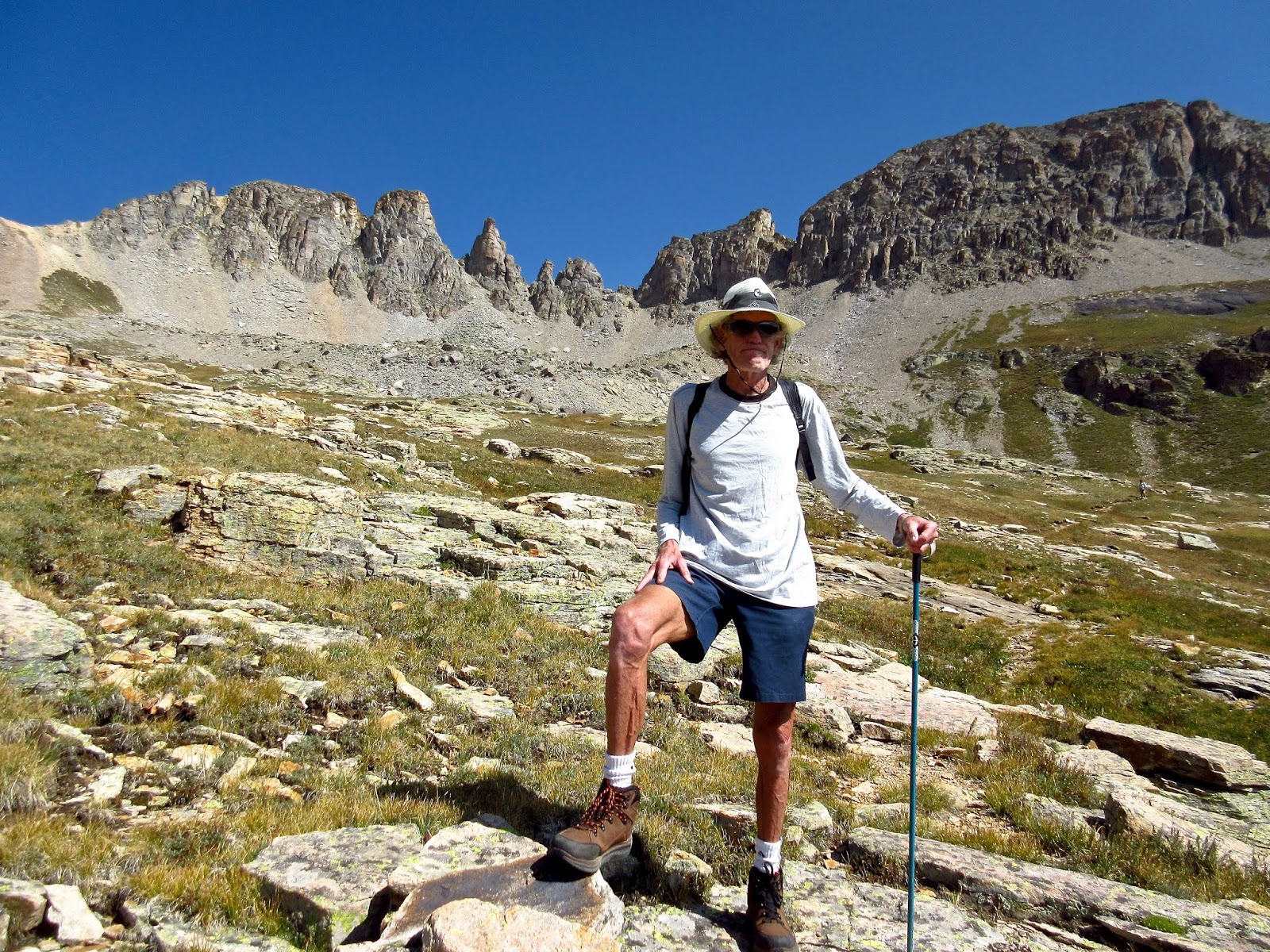 We plodded up and over a bald, sun-scorched ridge, then tripped along a rock-strewn bench graced with patches of autumnal tundra.

Oh summer, my truest love. I miss thee before you're gone. 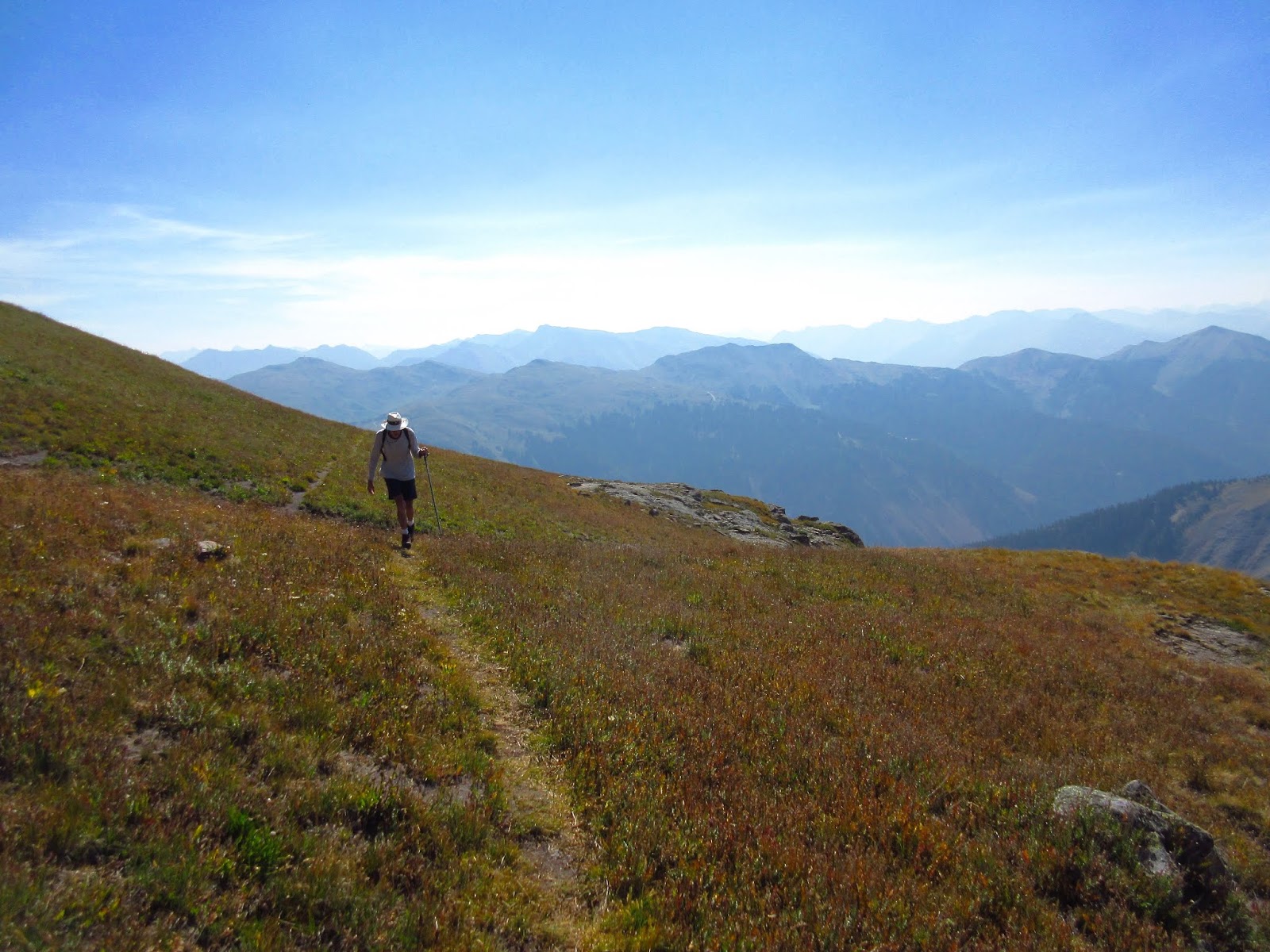 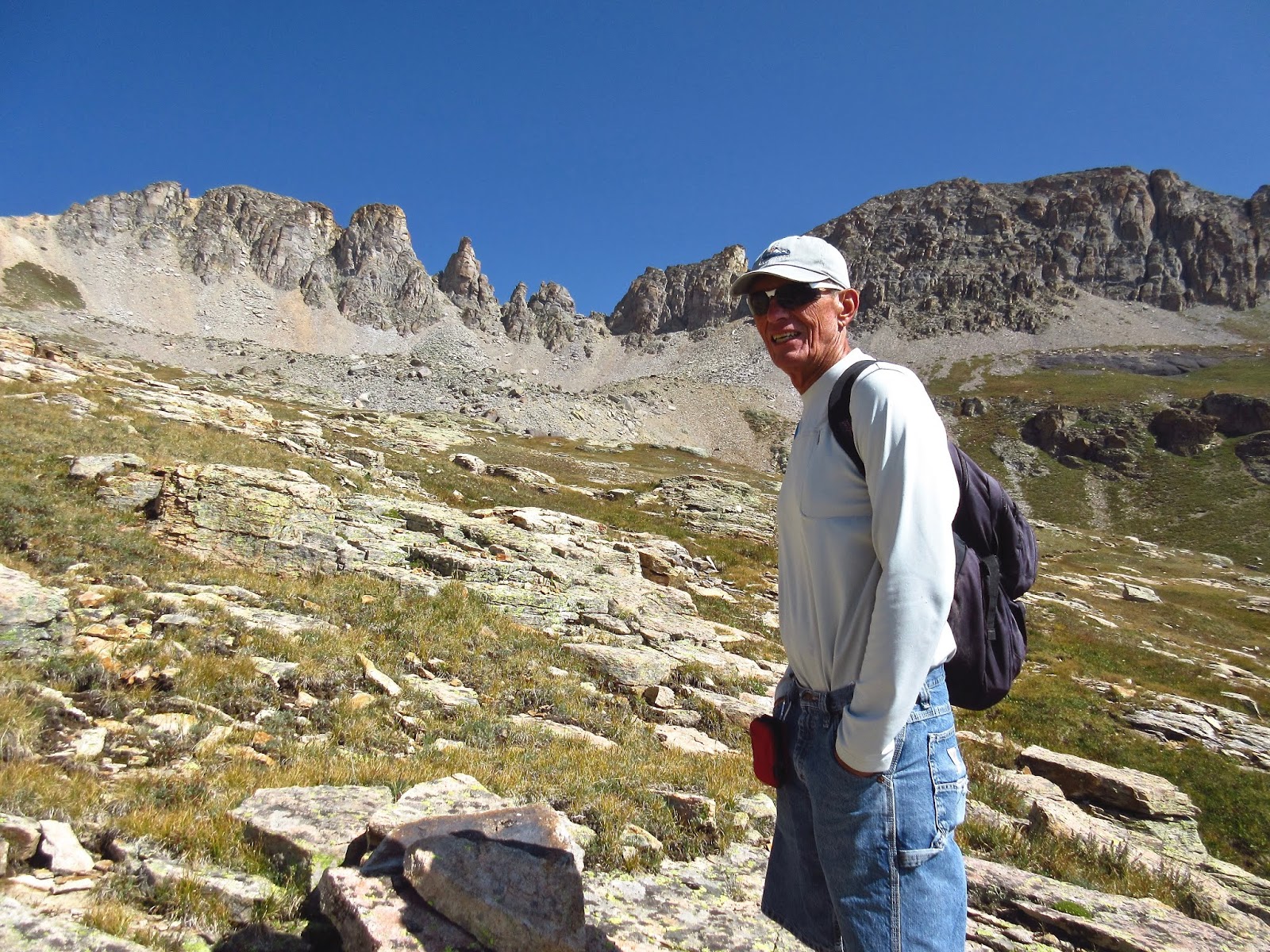 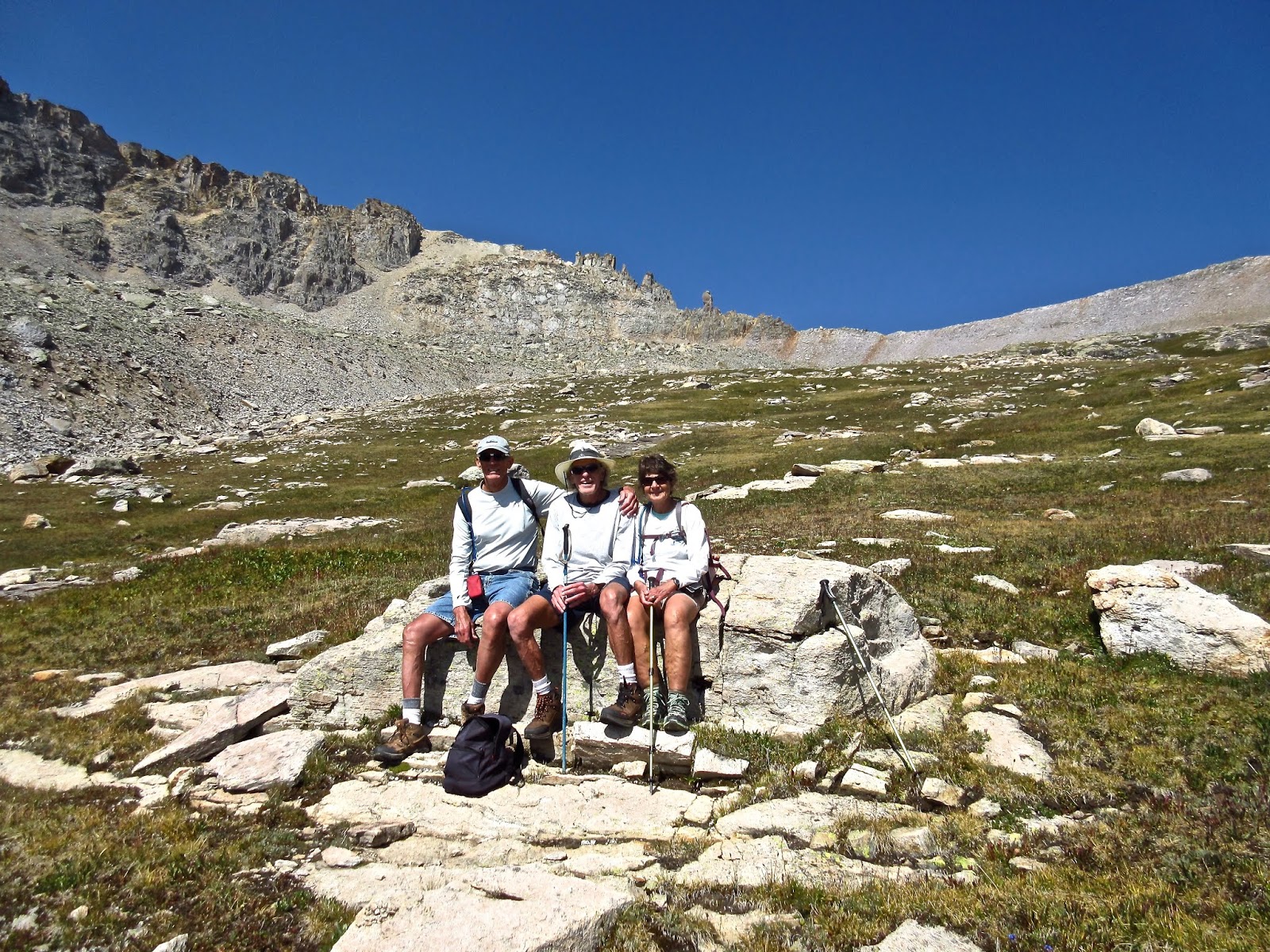 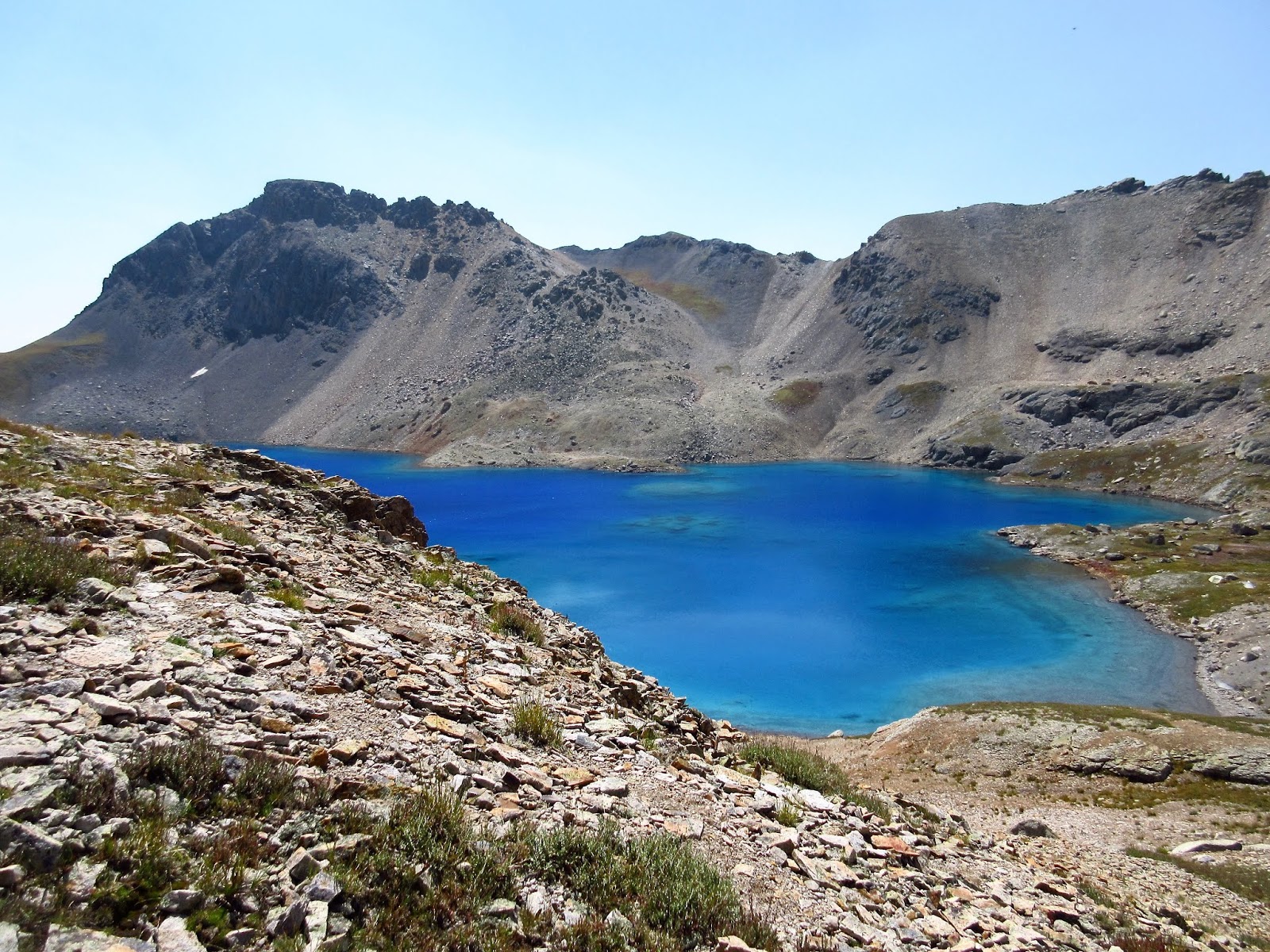 Columbine Lake: Clear-as-glass...blue as the petals on her namesake flower.

Leon's itching to swim....right after he navigates the slippery slope down to the shoreline. On the way he notices a couple gals beat him into the ice water. 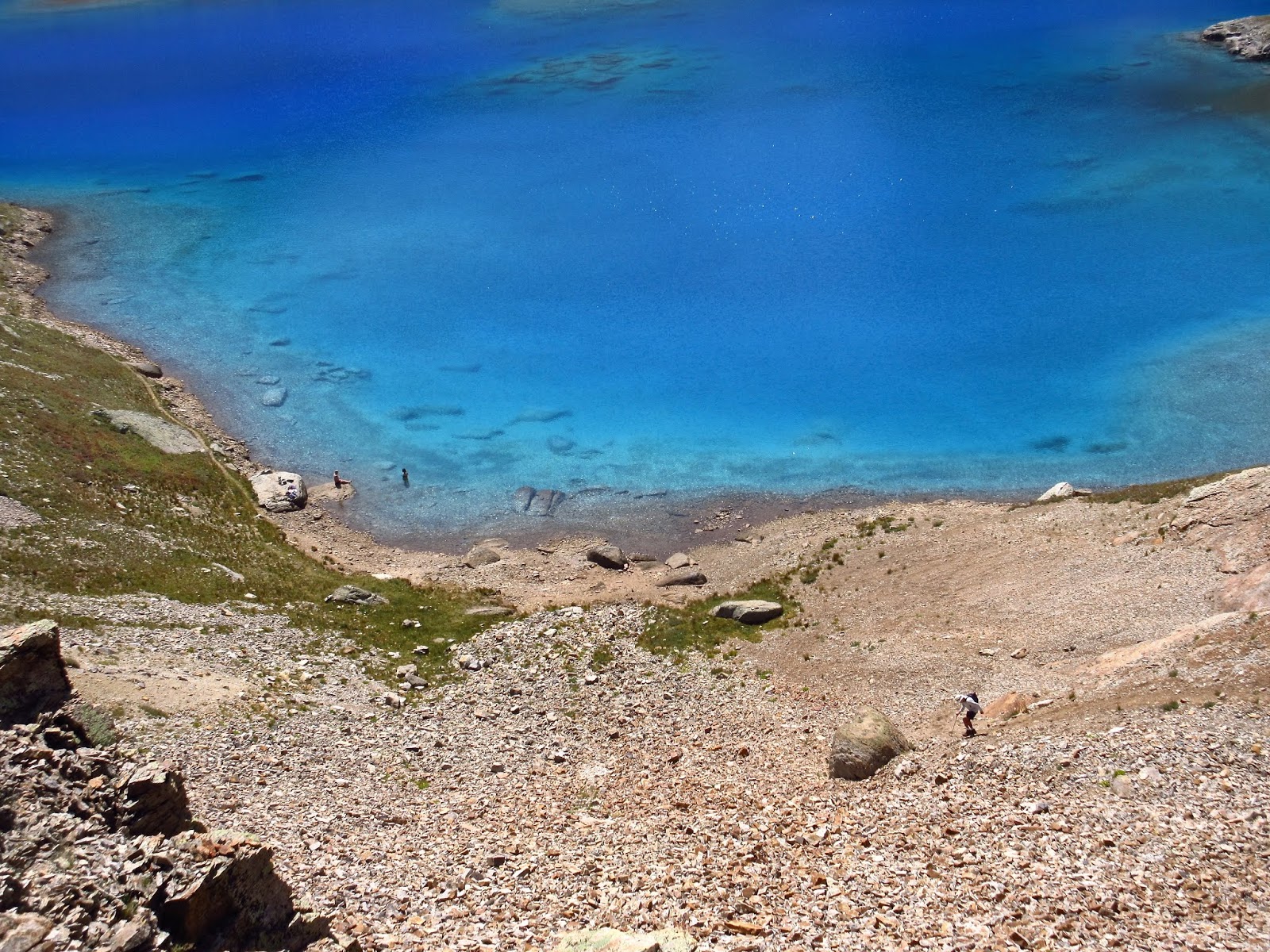 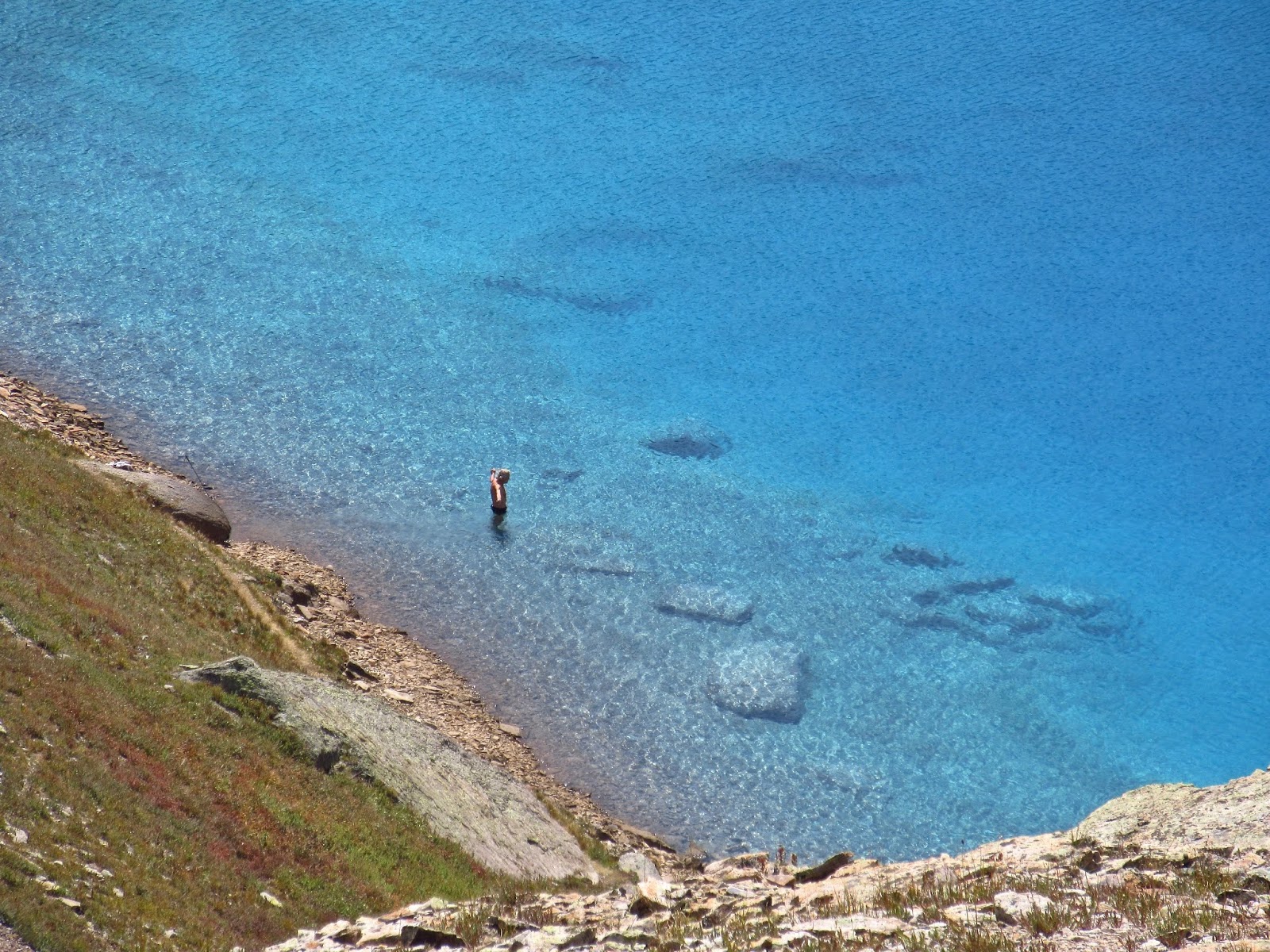 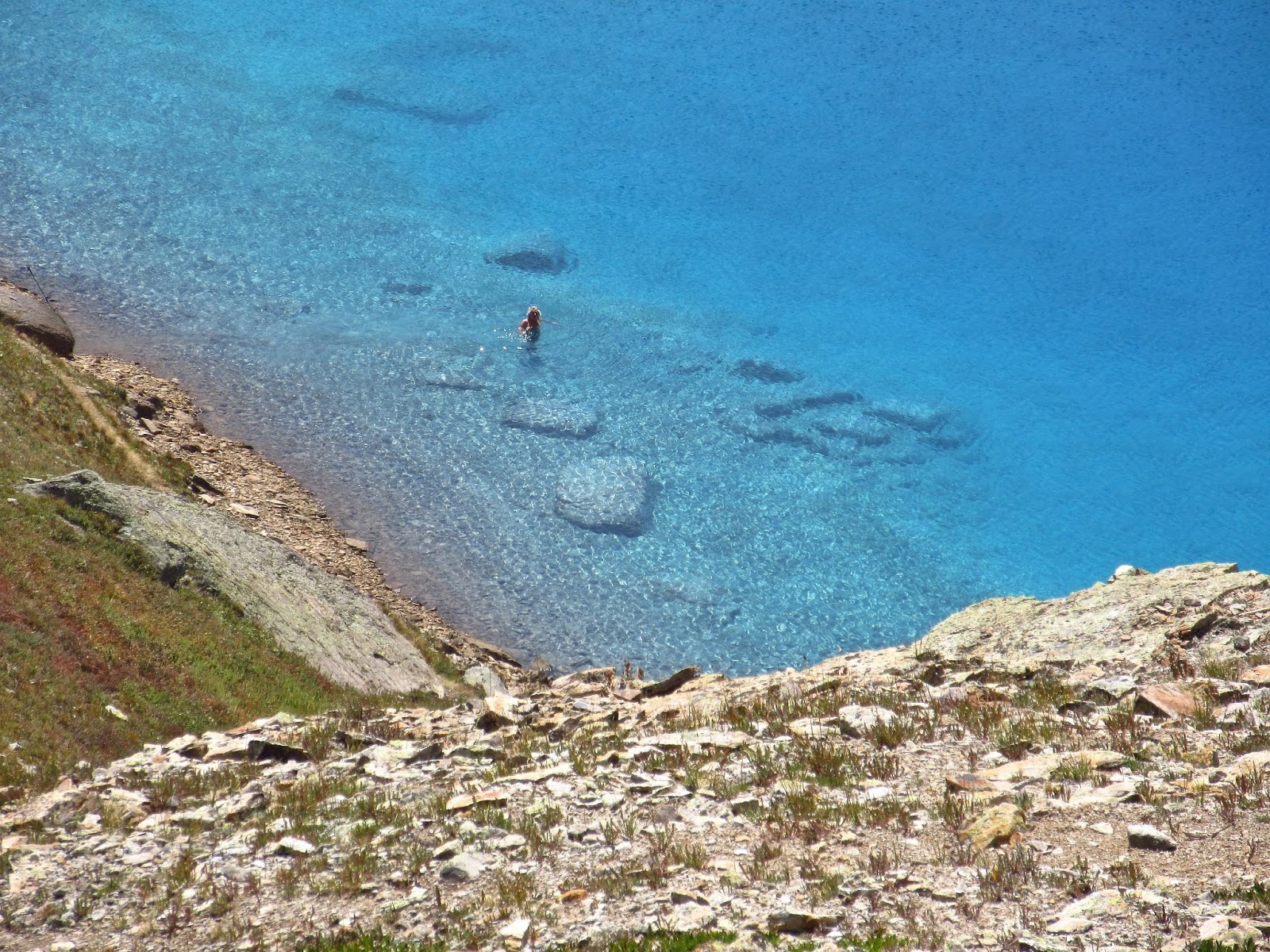 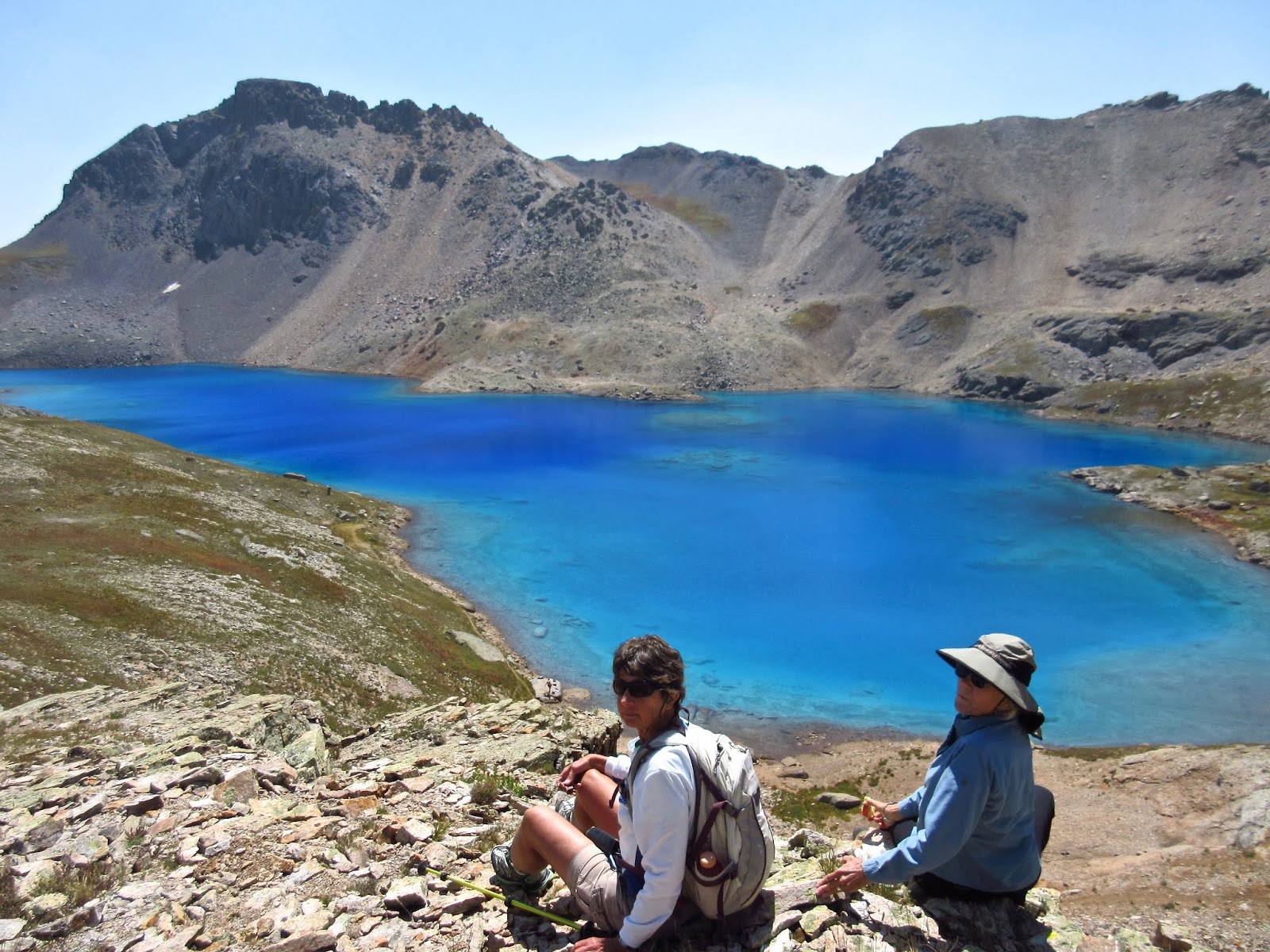 We watched Leon from the "cheap seats." All too soon it was time to turn our backs on the sapphire gem. 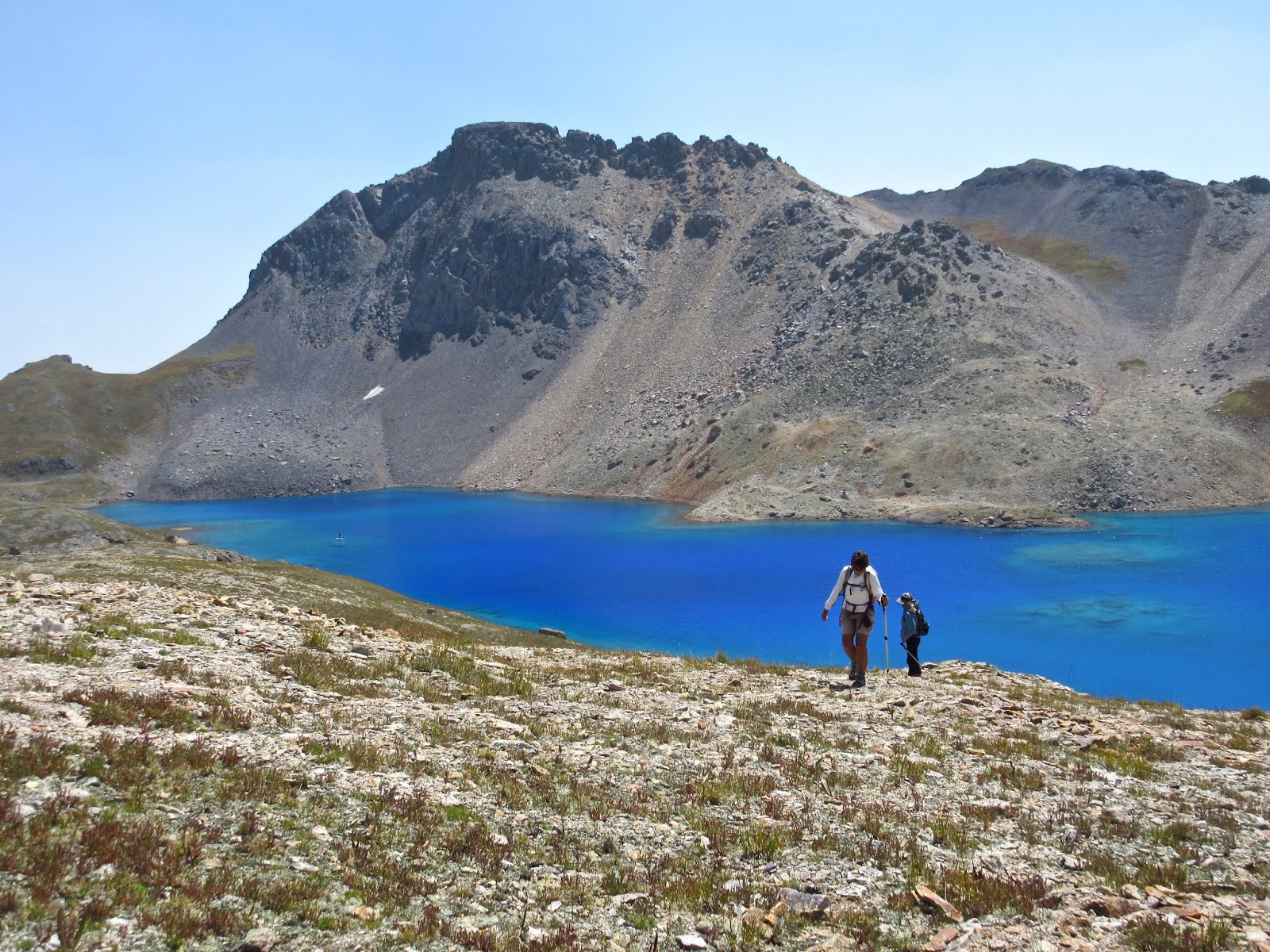 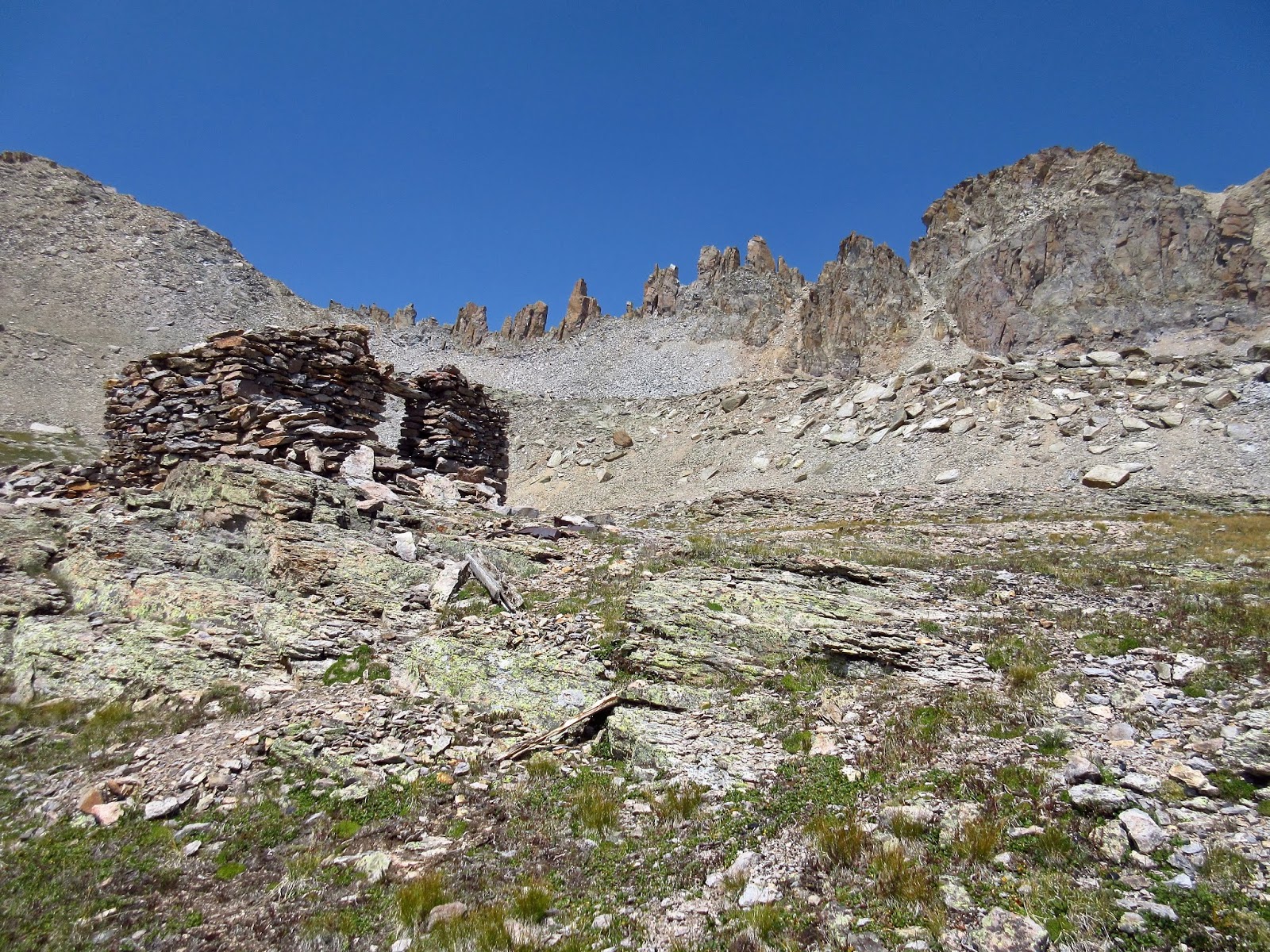 On our return trip Bobbie spotted a rock structure above us, near the foot of an in-spired ridge-line. Leon and I hustled up to check it out, finding remnants of an old cookstove along with an assortment of other rusty treasures. Certainly the constructers made good use of the materials at hand, but with no mortar between rocks we imagined it could be a bit drafty on cold nights. 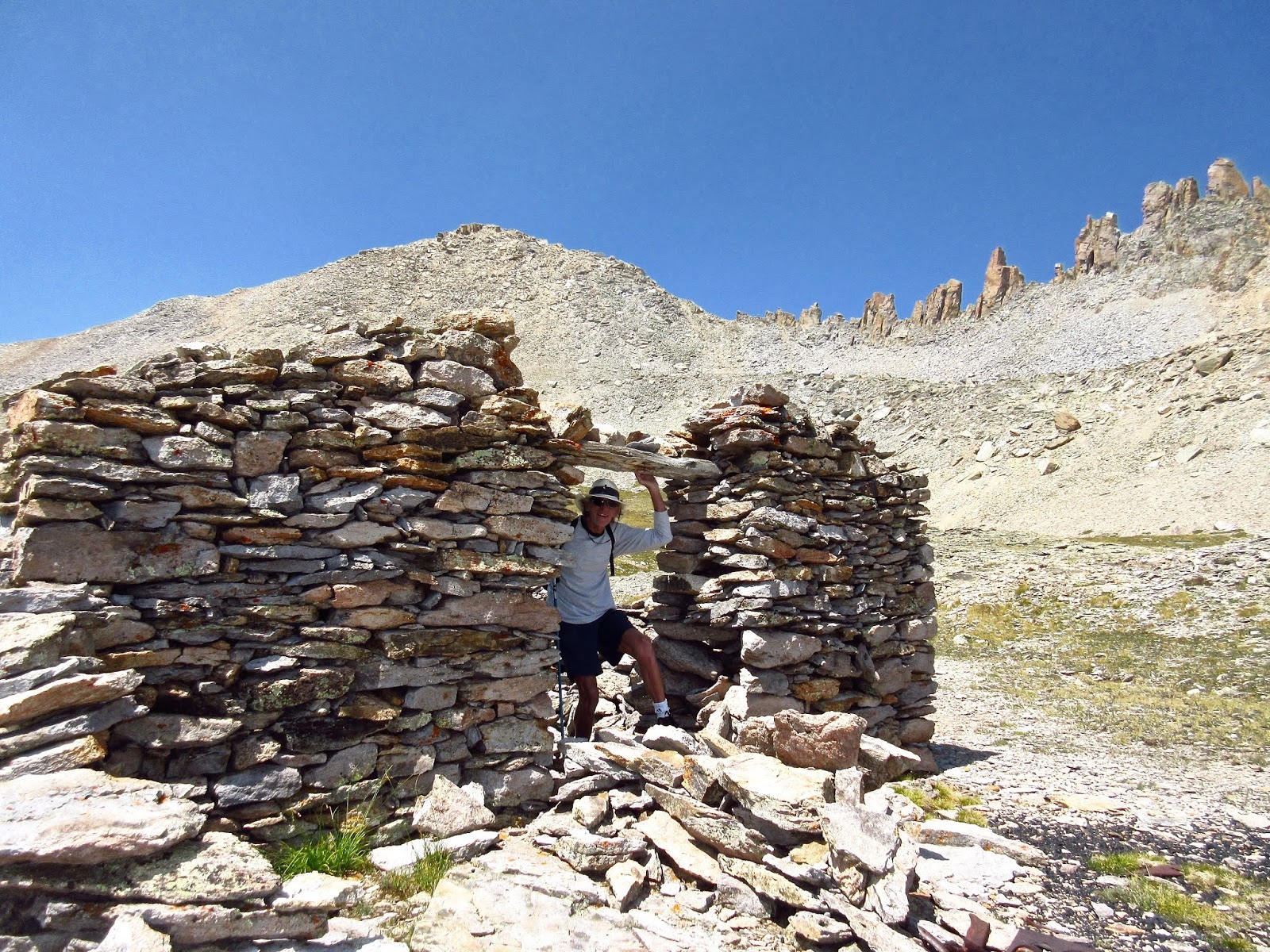 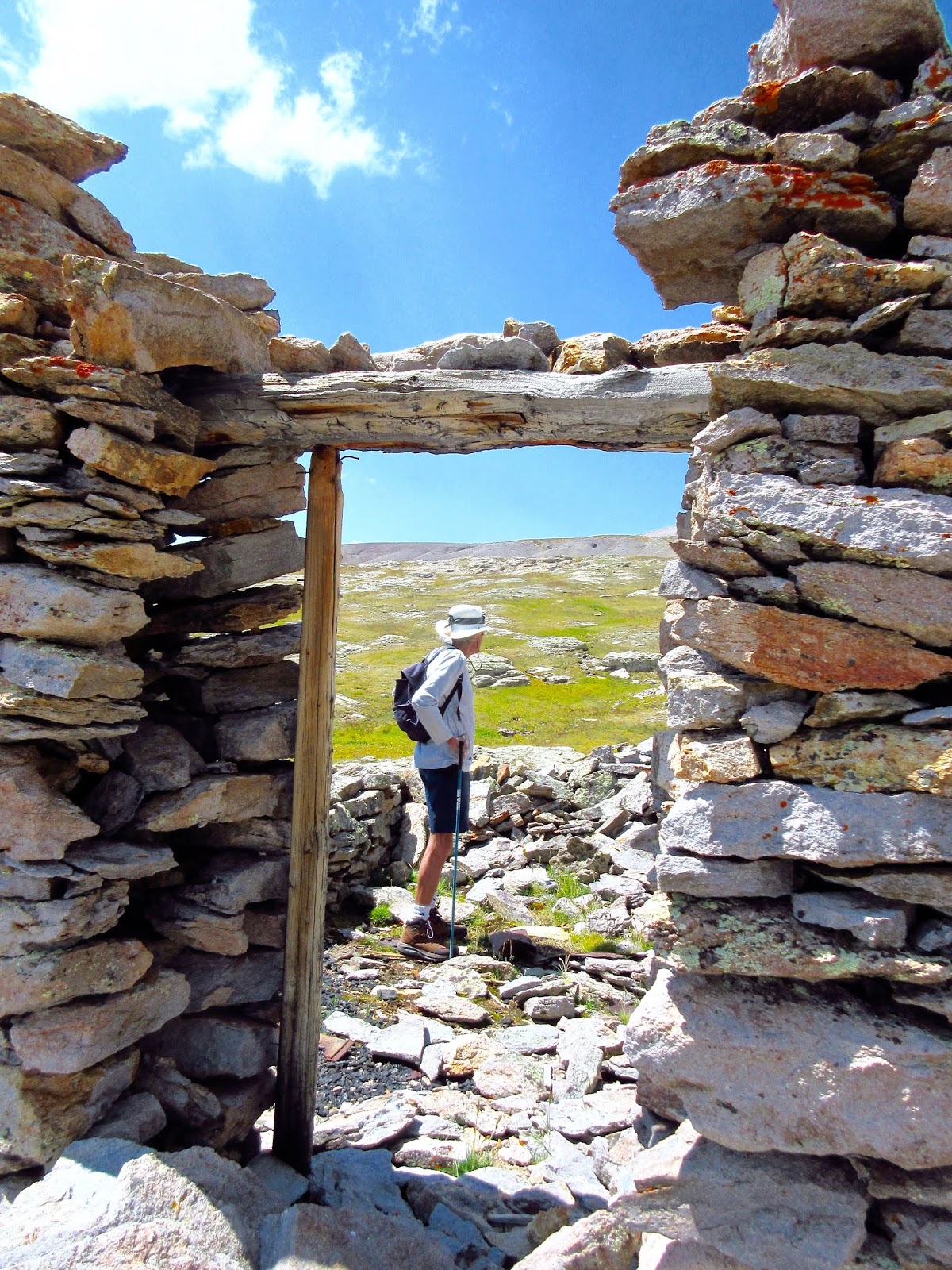 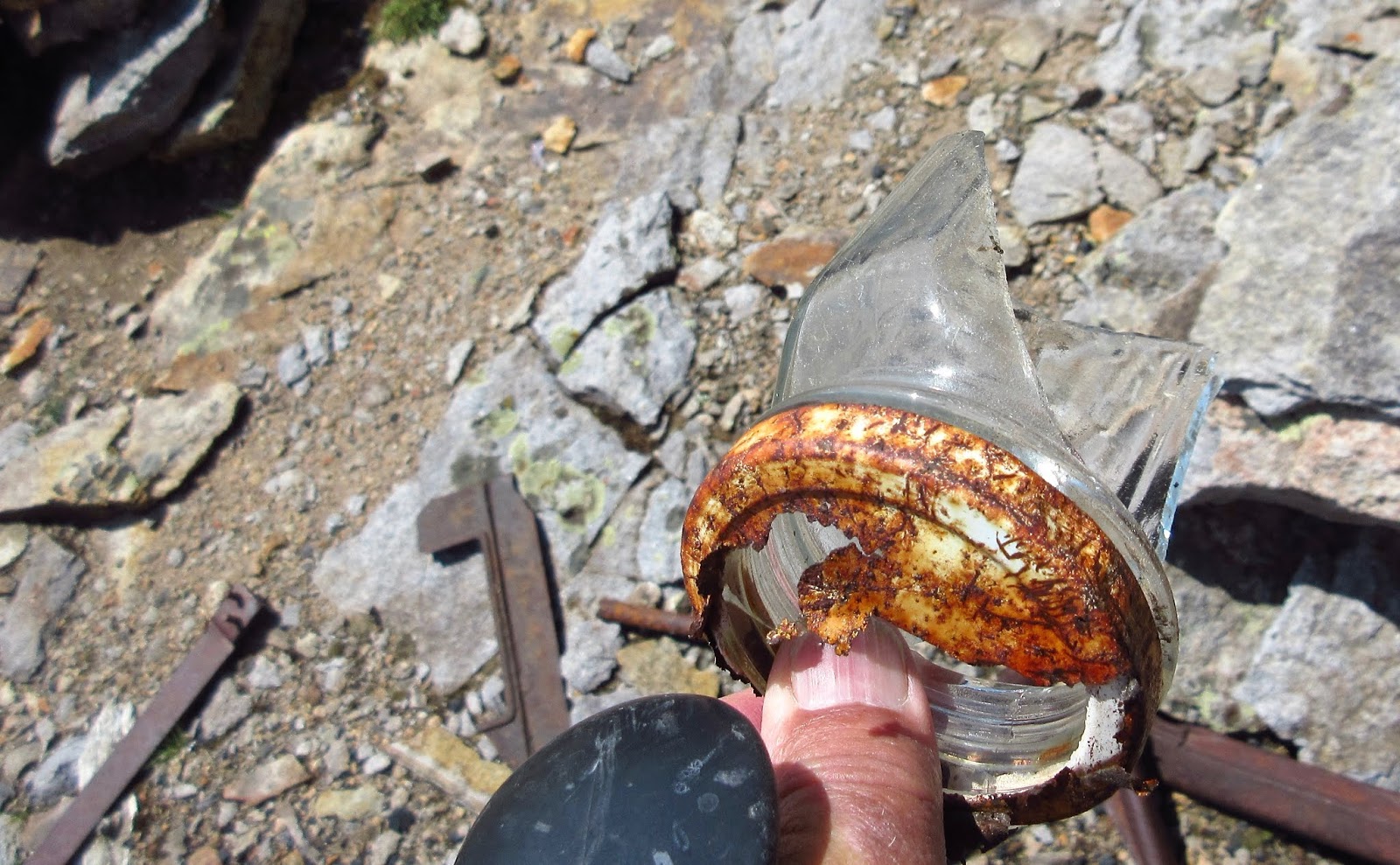 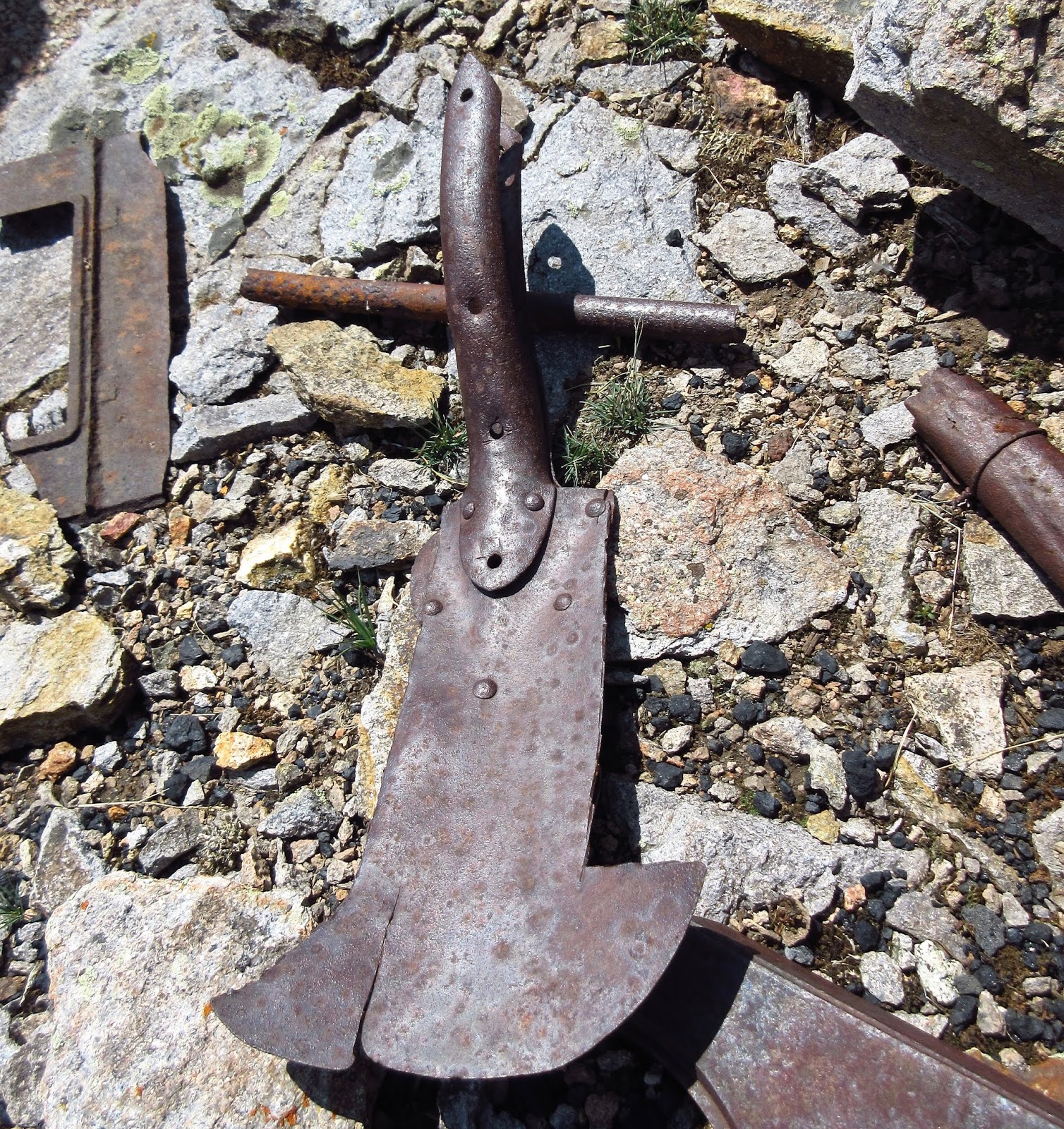 We looked for Martha's missing jacket on the way back, apparently it slipped from her pack somewhere on our way to Columbine. It's always difficult to retrace our exact route. Even though we used a spread formation search, we never did find her jacket. 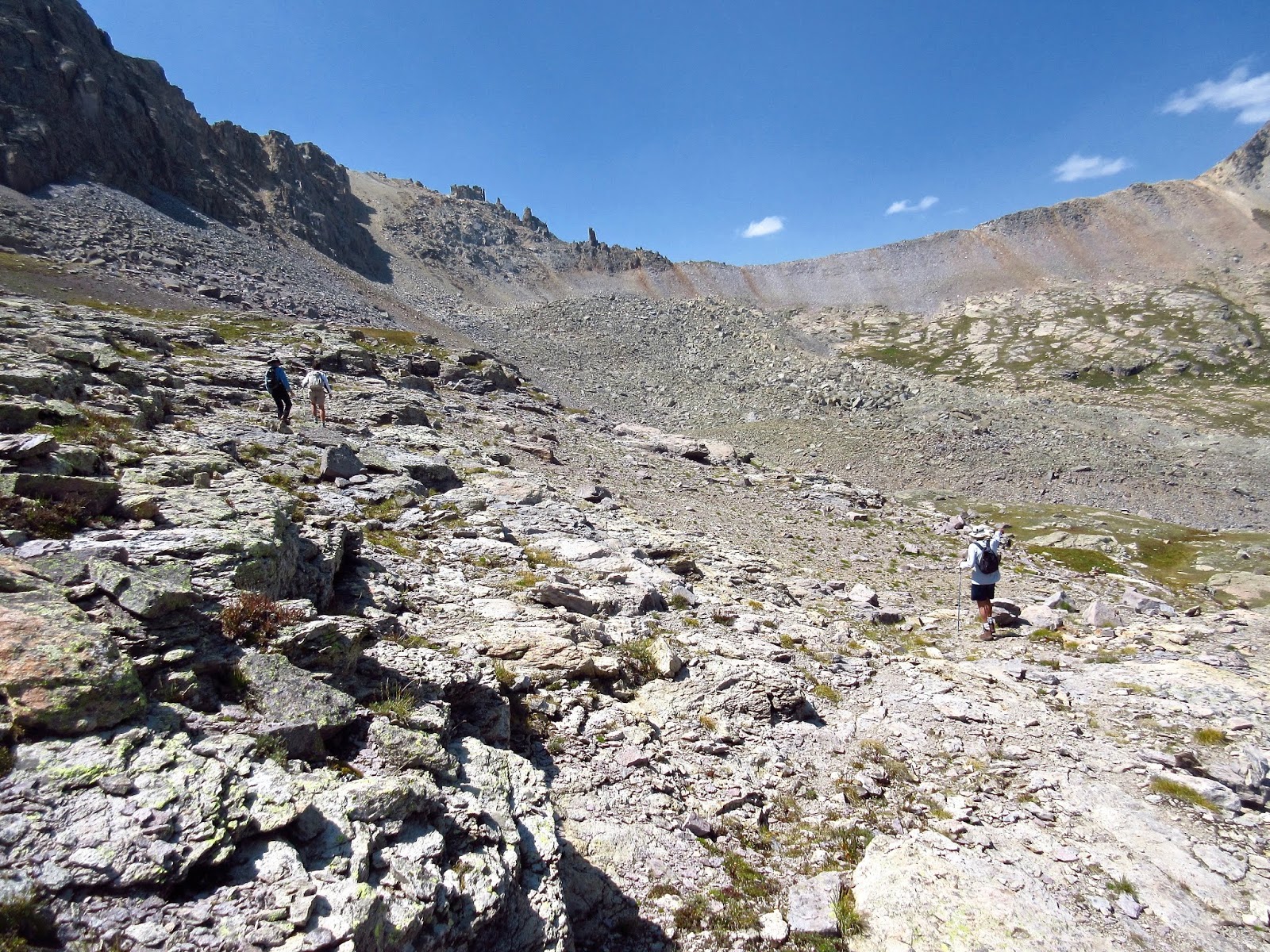 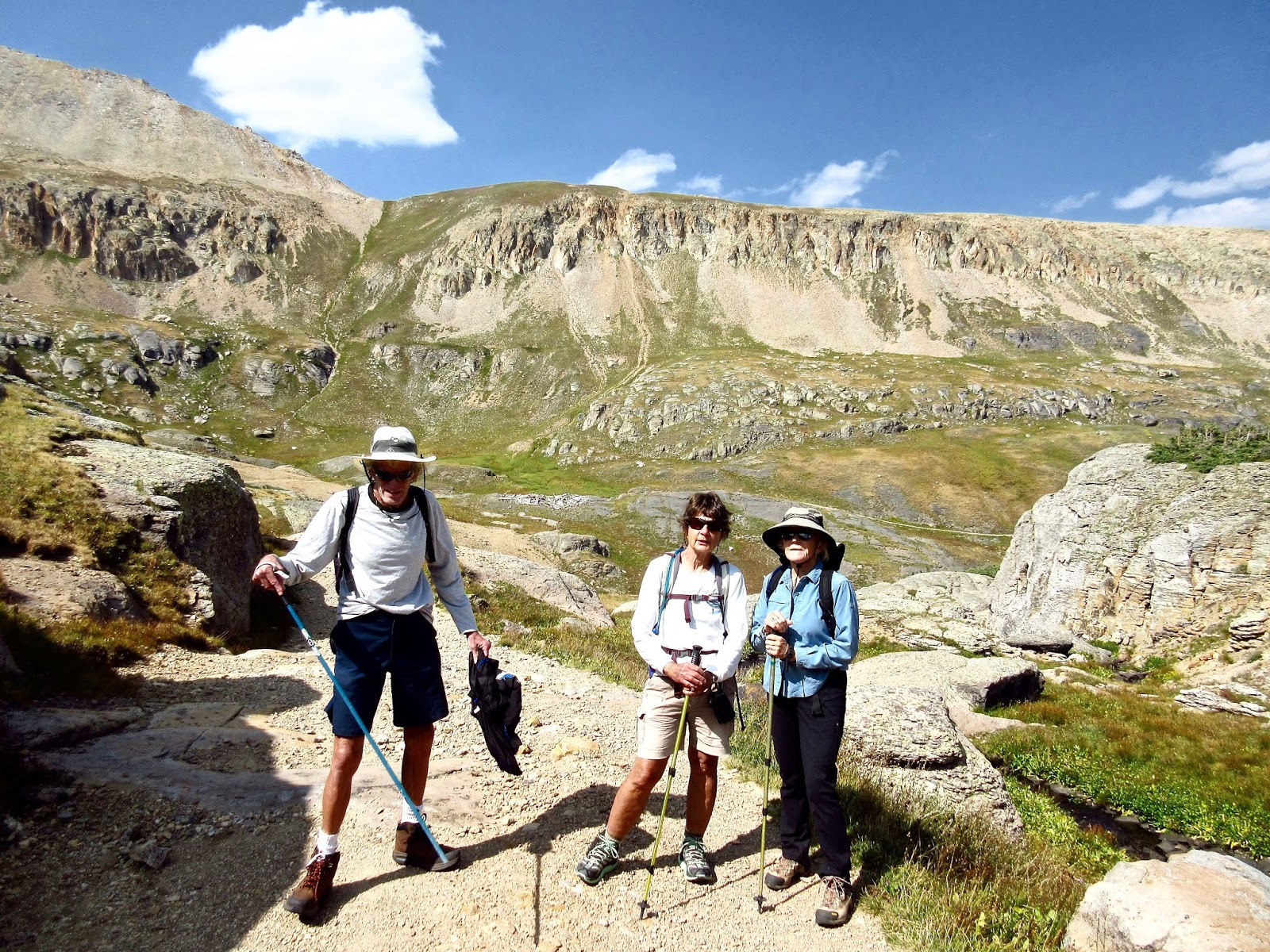 Another portrait above Bullion King Lake... 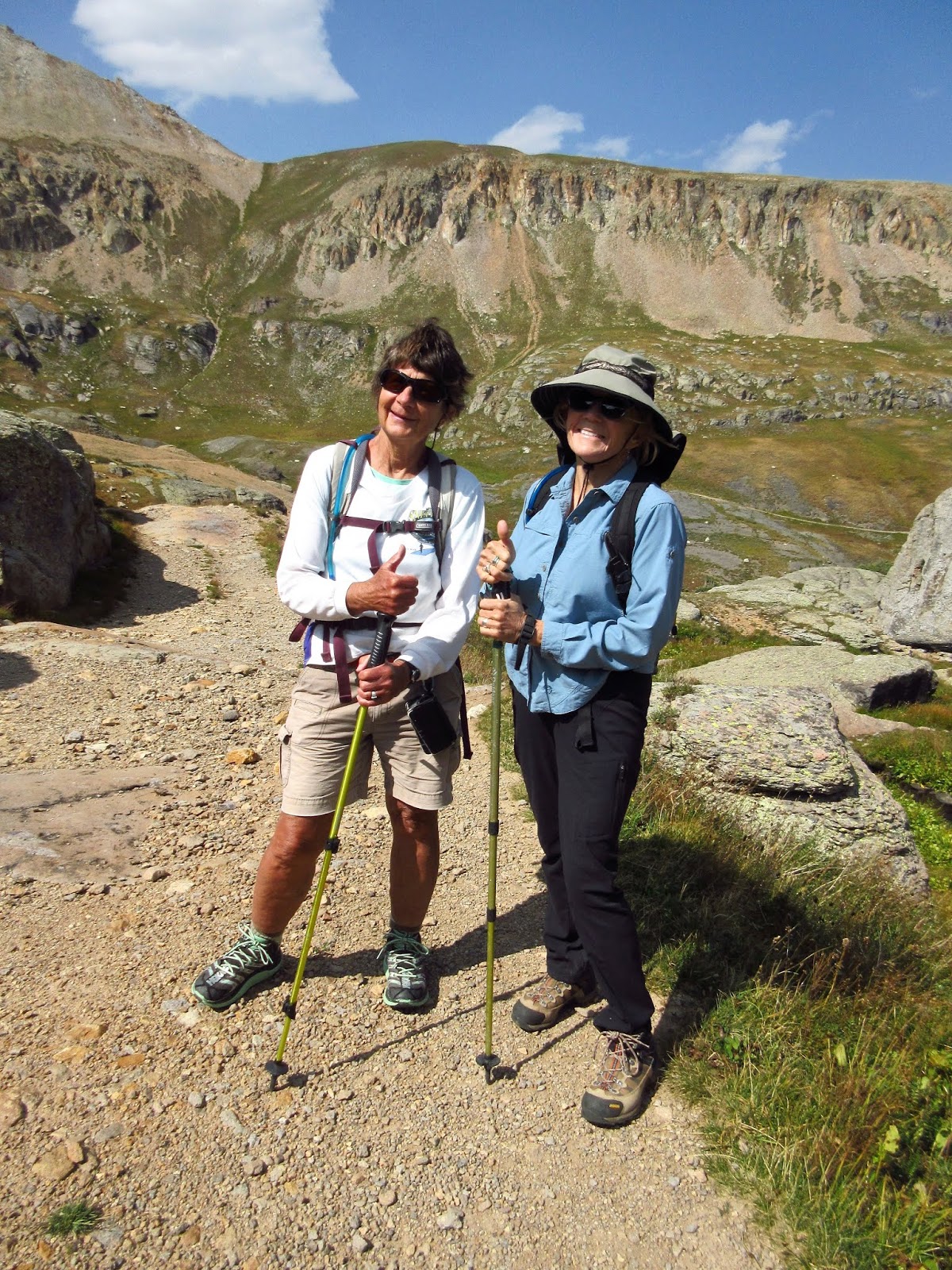