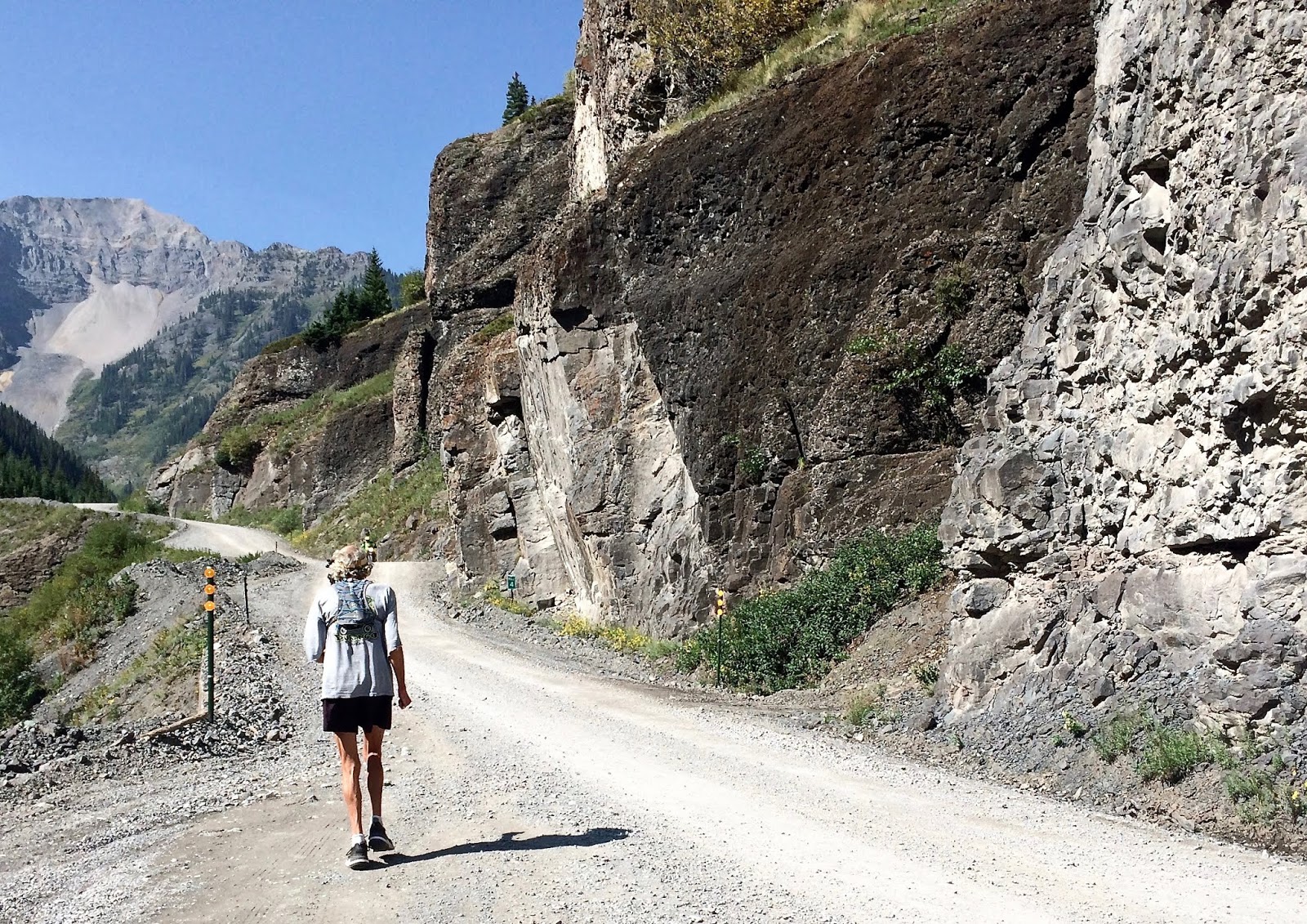 "There are no limits, only plateaus. And you must not stay there, you must go beyond them." Bruce Lee


Leon suggested we do a run up to Camp Bird Mine. I had yet to bike it this year so I said, "You run, I'll ride." 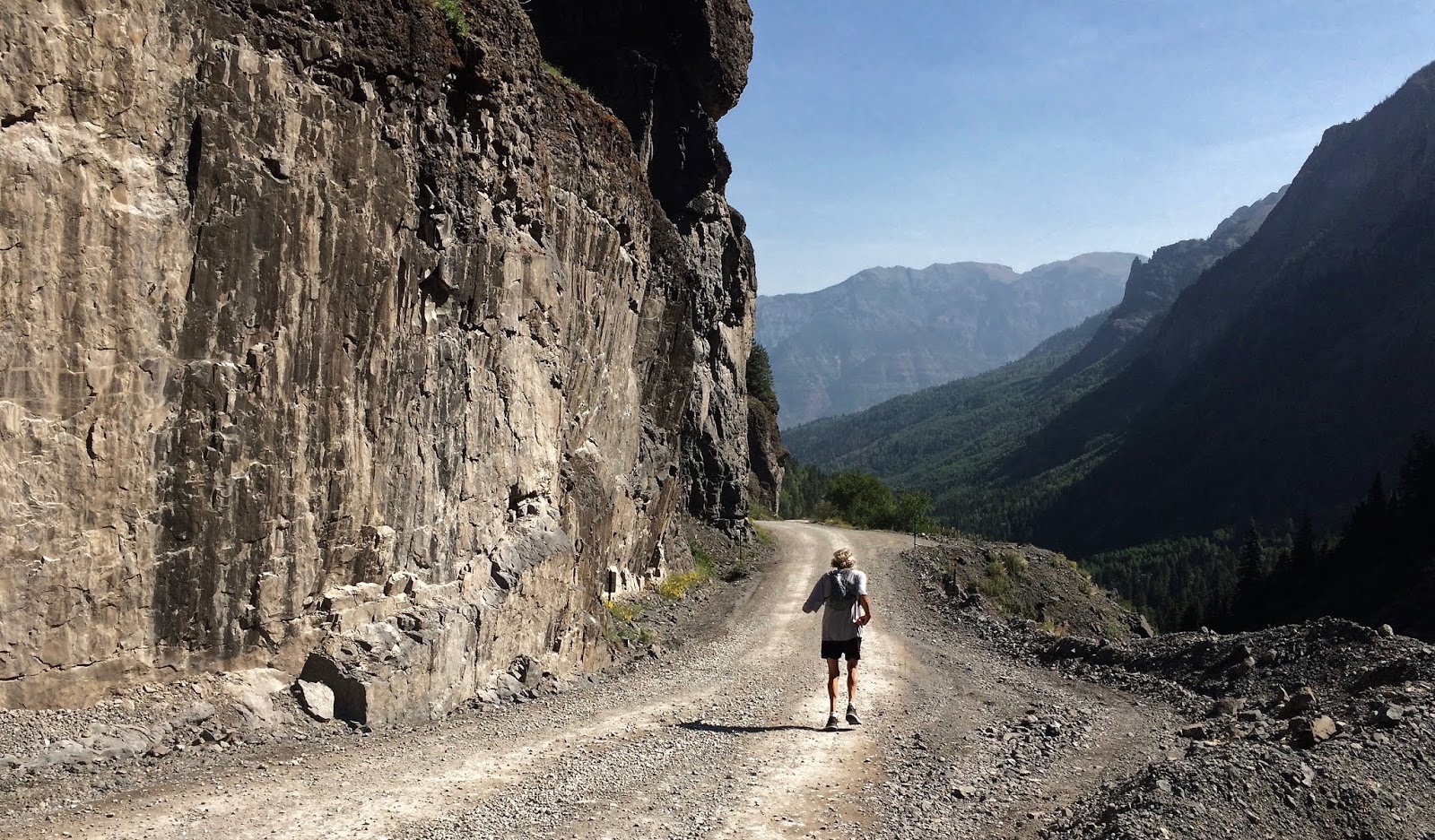 It has been our experience (Bobbie and I) that, when it comes to long, steep grades, we can run them faster than bike them. We proved it over and over on the road up to  Black Canyon...6 miles over 2000 feet of elevation gain. But that was on pavement. 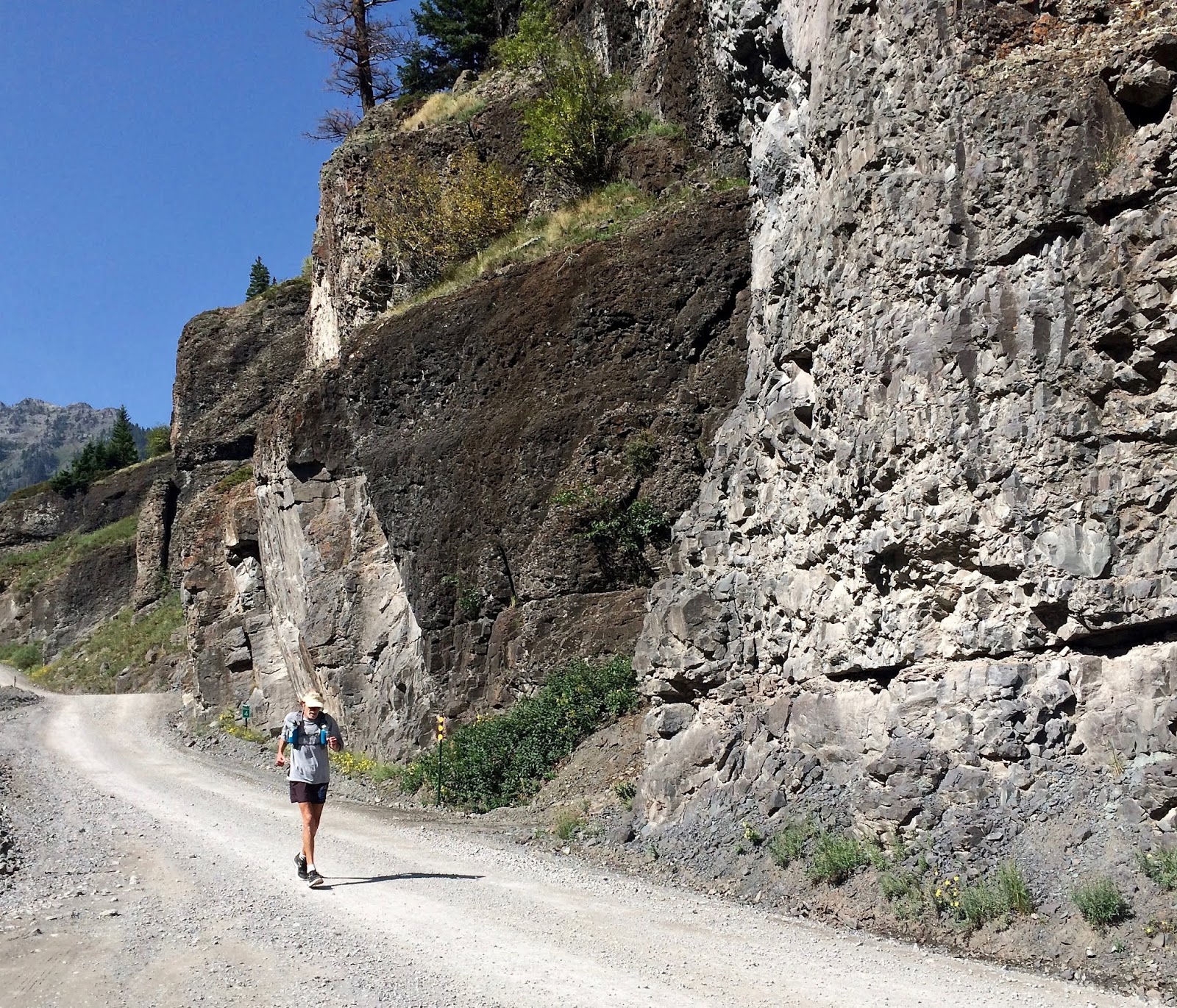 The "road" up to Camp Bird Mine has similar stats, the biggest difference being that it has sections of loose gravel instead of pavement. The grades are steeper too, and, of course, the elevation is higher. Oh, and there's one more "difference," being thirty-some years older than when we regularly used Black Canyon for training. 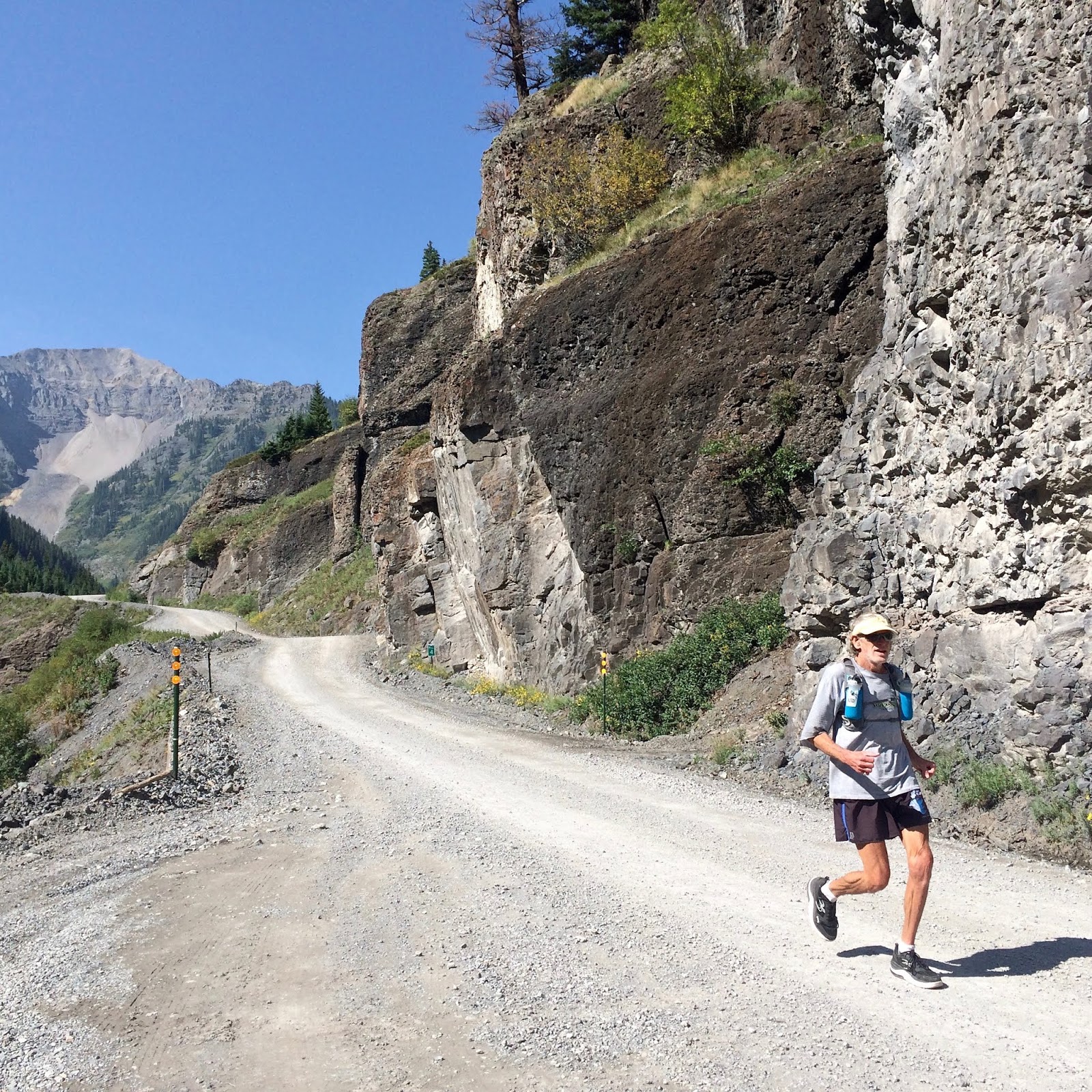 The first grade on Camp Bird Road is a ball-busting, demoralizing bitch. Suddenly, before I get my second wind, the helmet comes off as sweat begins to pour...always finding my eyes, unfortunately.

As I predicted, Leon pulled away from me on "The Bitch."  I'm left alone to ponder the previous night's foolish bravado of agreeing to do Camp Bird Road while under the evil influence of alcohol. We had made it clear, however, that this was not to be a race. Right.
Hey, put two guys on the same course and it's always a race. 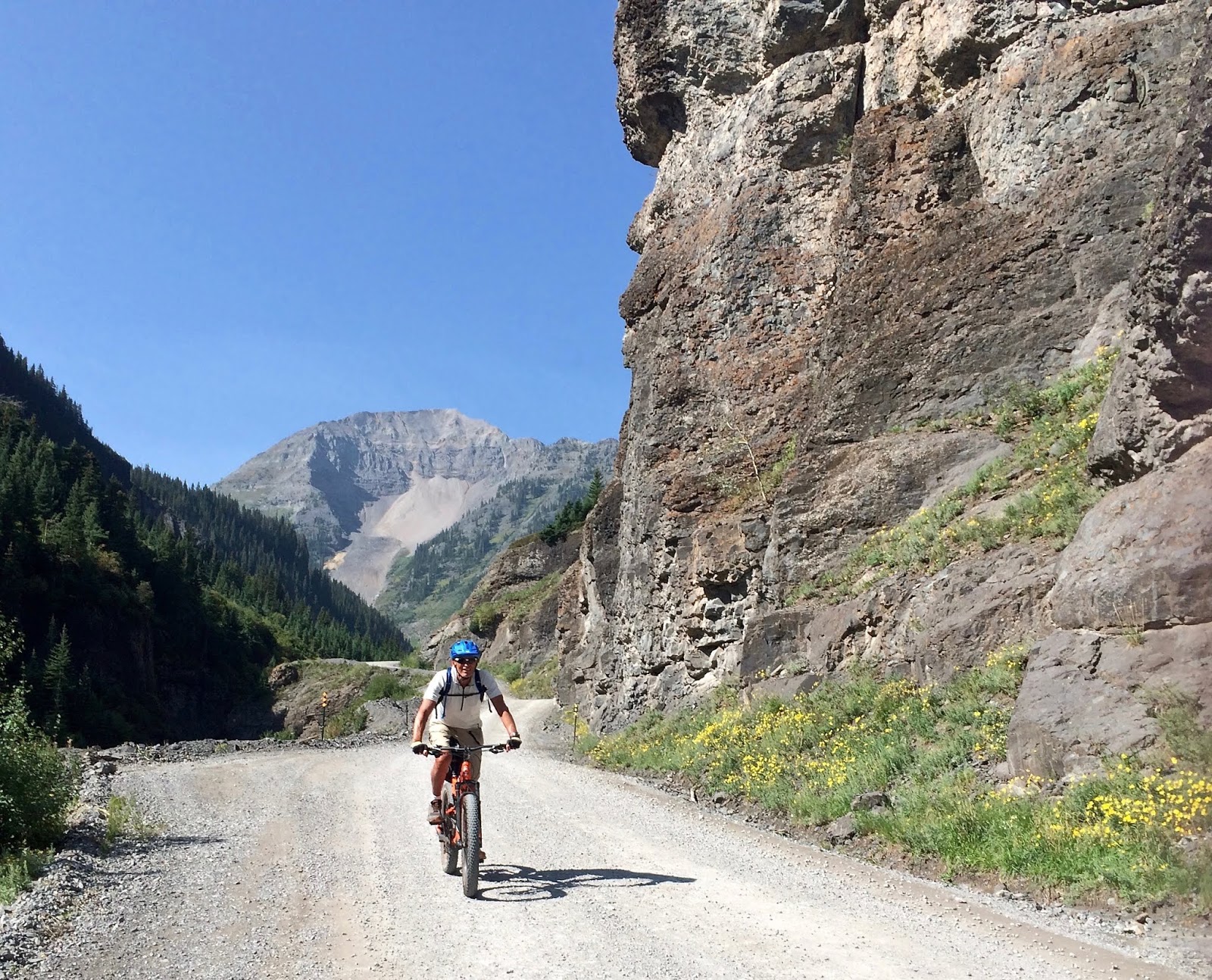 Around three miles out up, the grade briefly relents. I geared up, put the "pedals to the metal," even though they happen to be plastic, in a furious attempt to reel in Pal Leon. Sure enough, a few hundred yards down up the road Leon stood chatting with a blonde runner gal.

It was Jan from Montrose, training for the Imogene Pass run in a couple weeks: seventeen miles, up and over a 13,000 foot pass, and down to Telluride. As I passed I could hear Jan trying to talk Leon into entering, which he's been thinking about...except for the stiff $80 entry.
"That's a pretty expensive T-shirt."

"You guys will catch me on the next hill. See you shortly." 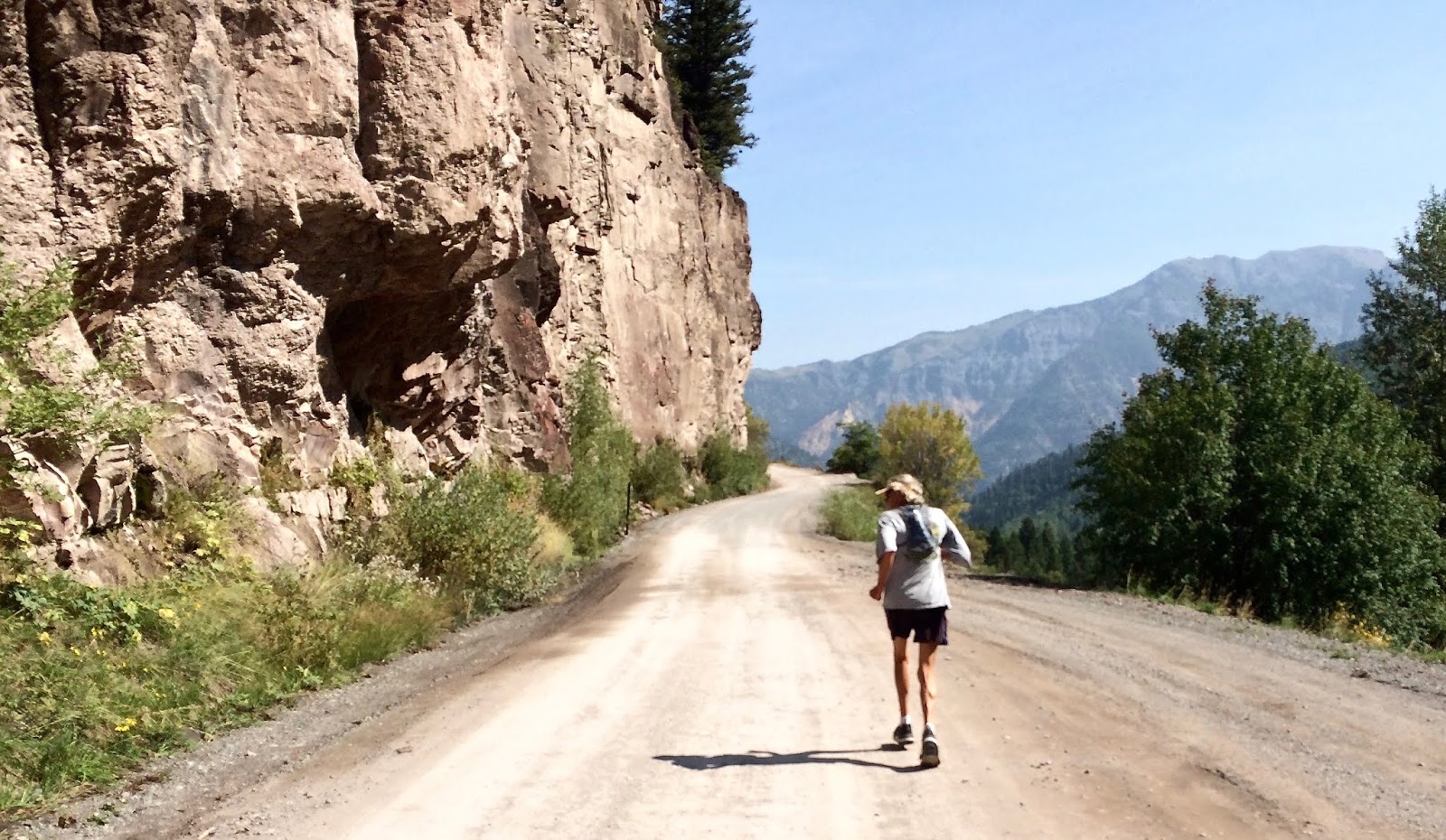 Yeah, "Hill." The last 3 miles are relentless, leg-fried torture. Add aching back and arm muscles from the handlebar death-grip and it's a total body workout.

Sweat pours; I'm breathing like a steam engine about to blow it's stack; heart rate pushing 200 BPM. Why? we both ask. Impaired judgement? Beer? Too much macho in my nachos?I can only attempt to justify "madness" and it usually fails or falls on deaf ears or ends up making a mess on the floor. Few will understand, but for what it's worth:

1) "Because I still can" (and soon won't be able)
2) "Tis more honorable to die tackling a mountain than sitting pretty in an easy-chair...or at a desk...or anyplace else for that matter."

Rest assured; I know my "days" have numbers on them. I'm simply trying to put off the "end-game" for as long as possible. I'm not ready to putz around the house with the tv blaring...take Sunday drives where we never get out of the car except to pee, or spend hours on Facebook counting "Likes and Loves." 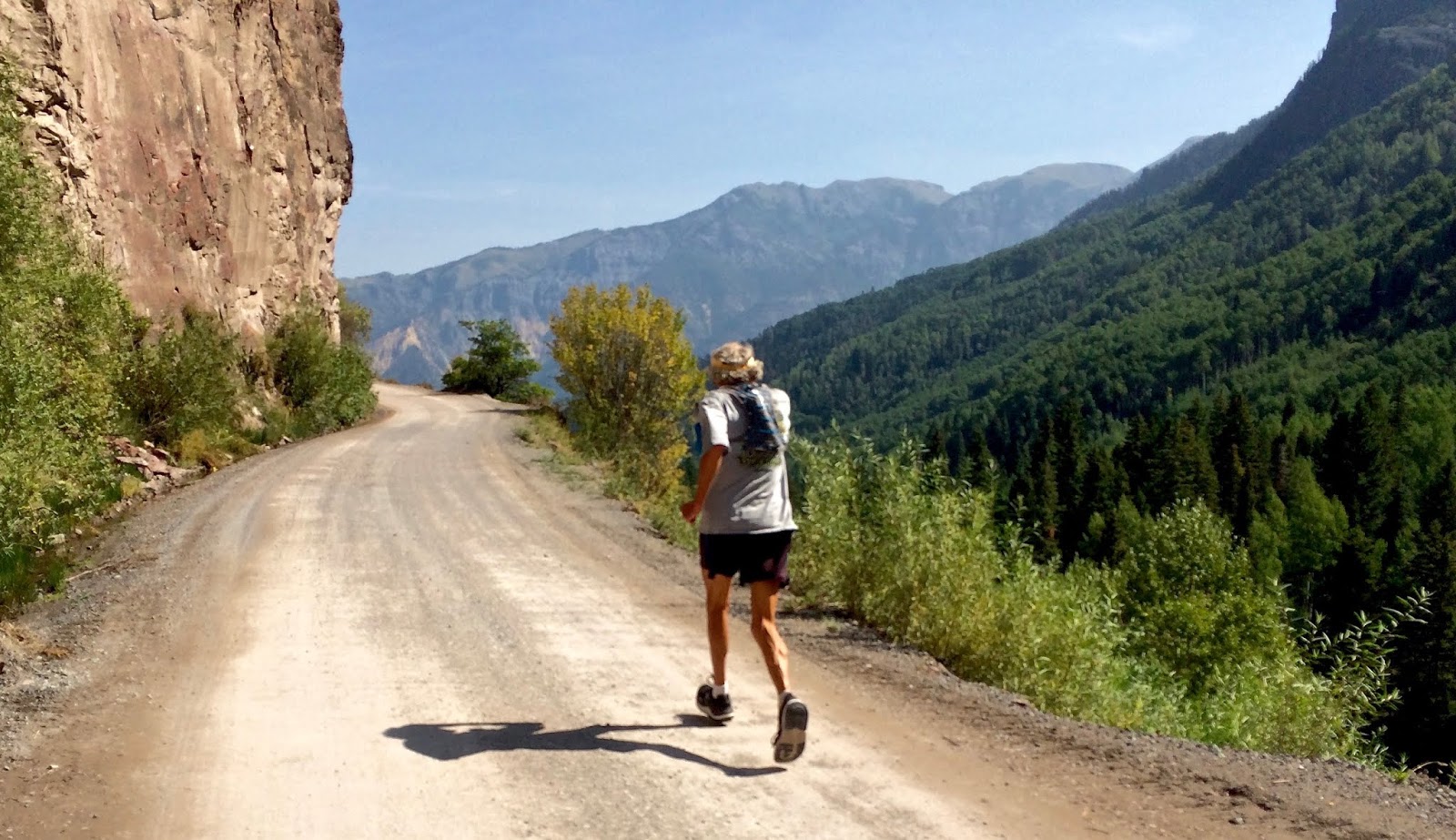 Or am I? God, it's so steep!!! A grind so slow that it's a struggle to keep my bike upright.

So slow was my pace that I kept looking over my shoulder for Leon. Thank God for Jan. Leon's probably got caught up in a gab-fest. I kept at it, mashing pedals while trying to lose myself in the scenery, praying mercy, swearing to never again make such decisions after a couple of beers.

Finally, and I mean that in its most literal sense, I saw the finish line. I cast a furtive glance over my shoulder. No Leon. Hmmm.

An hour and 22 nonstop minutes. Not bad for this year's first attempt, considering my very first ride up Camp Bird (some 6 years ago) took an hour and 45 minutes.

Just shy of four minutes later, Leon tops out. If not for Jan, we'd probably been neck n' neck at the finish and one or both of us might have died. Crazy. But to me, it is just such "crazy" things that pay immeasurable dividends. It's hard to put into words.

Seldom do we ever feel more alive than when we risk something. When such things are over, the high can last for days, and the lows, weeks. Yes, you say "addiction" and "intervention." And I say, without those highs, the lows aren't worth putting up with.

It's a long downhill coast for me on my bike. Leon, on the other hand, must run back to Lovely Ouray. I feel sorry for him and ride my brakes in order to keep him company.

Nearing Ouray Leon begins to flatline...he's out of glucose. I tell him to hang on, that I'm on my way to Mouse's Chocolates for Scrap Cookies and they'll be waiting for him at home.

Ten minutes later (and ten bucks lighter in the wallet) I huffed my way up our driveway...every bit as steep as Camp Bird Road...with three cookies fresh out of he oven. One for me, one for Bobbie, and one for crazy Leon, still out there somewhere, trying desperately to get home before I eat his.

Leon will need to do a couple more long downhills if he's going to run and finish Imogene. Be sure to carry some energy bars, Pal. 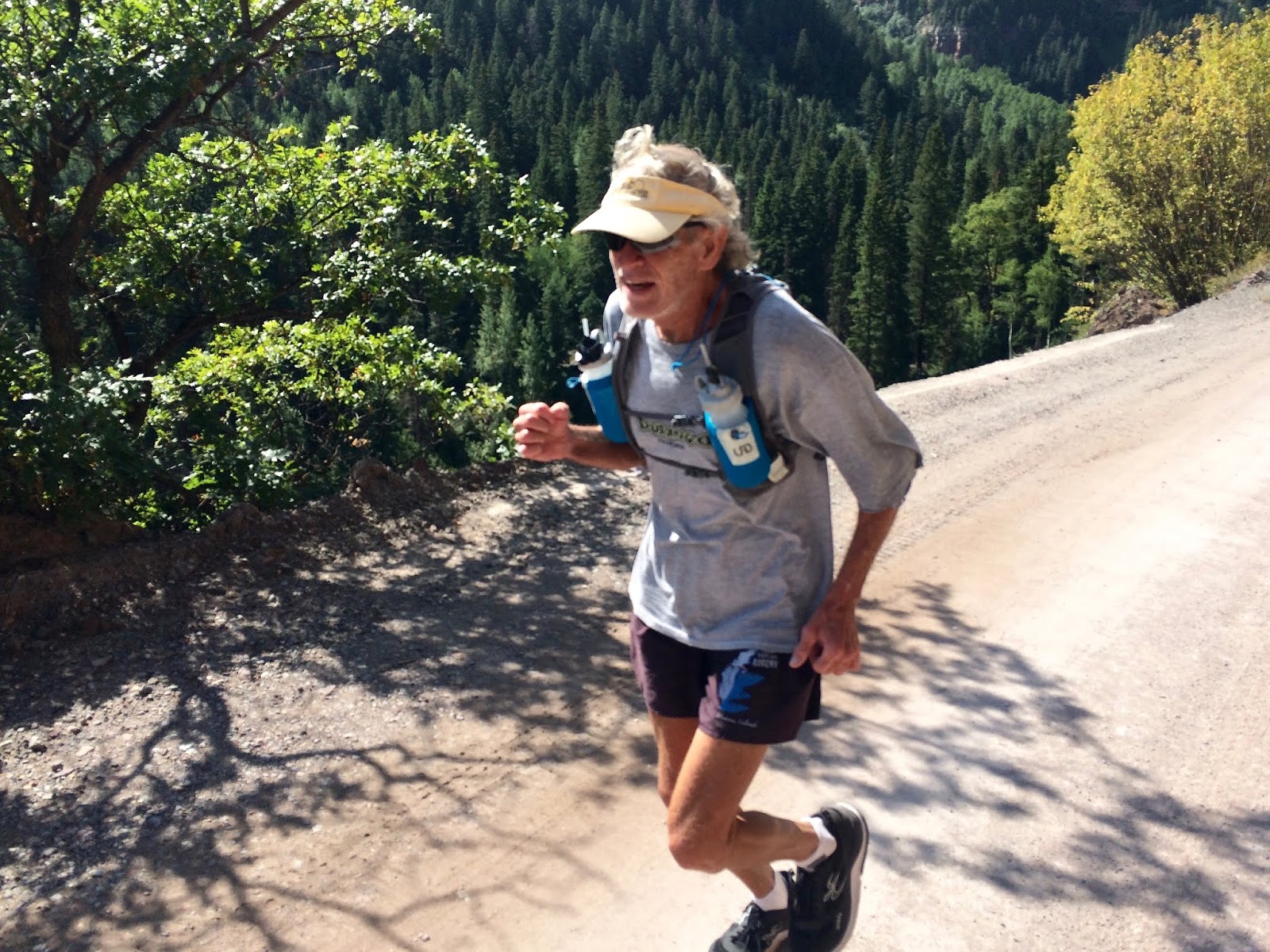 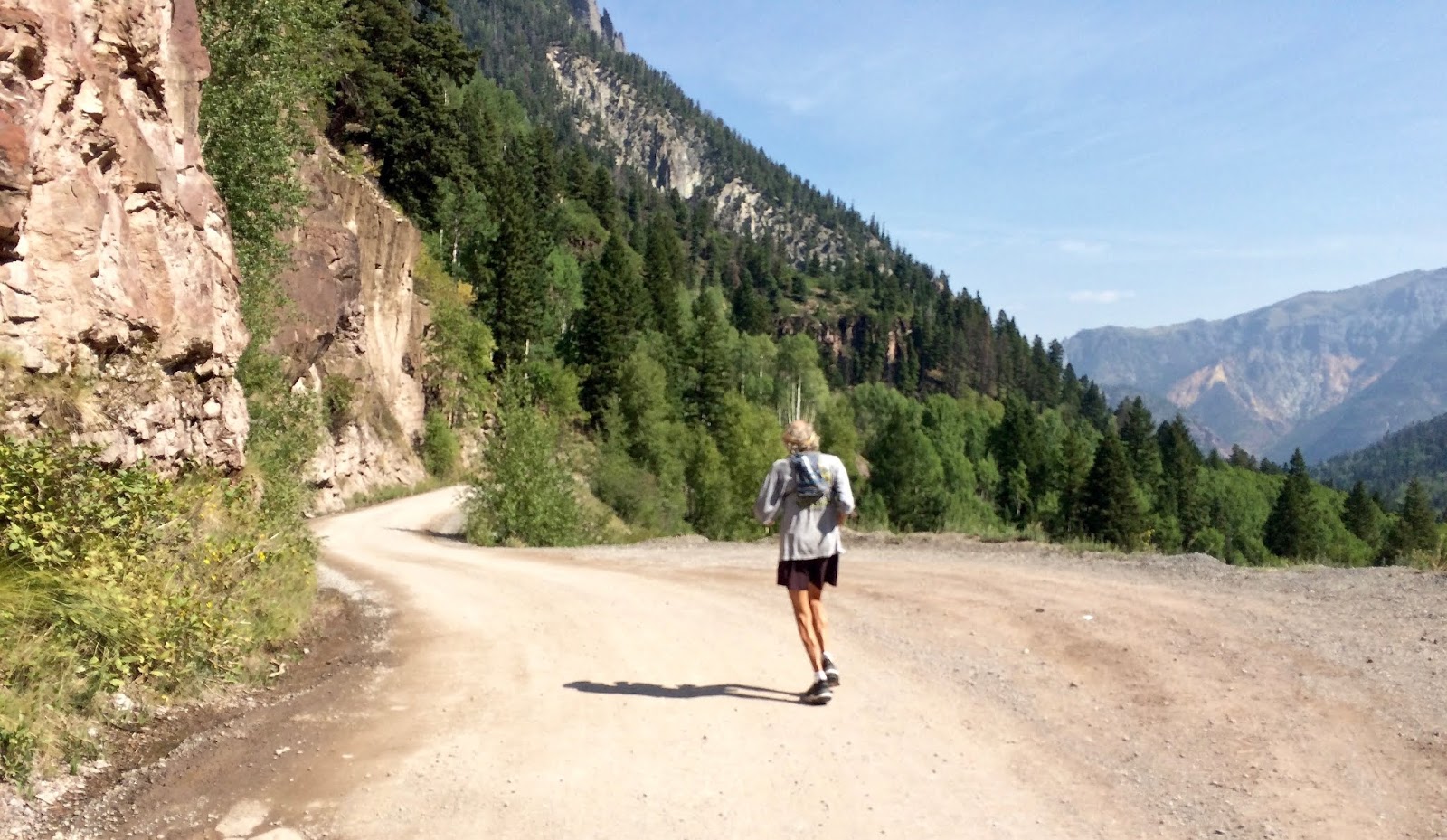 "There are no limits, only plateaus. And you must not stay there, you must go beyond them." Bruce Lee
Posted by Box Canyon Blog.com at 8:03 AM