Lost and Found on Shaky Ground: A Tale of Two Hikes... 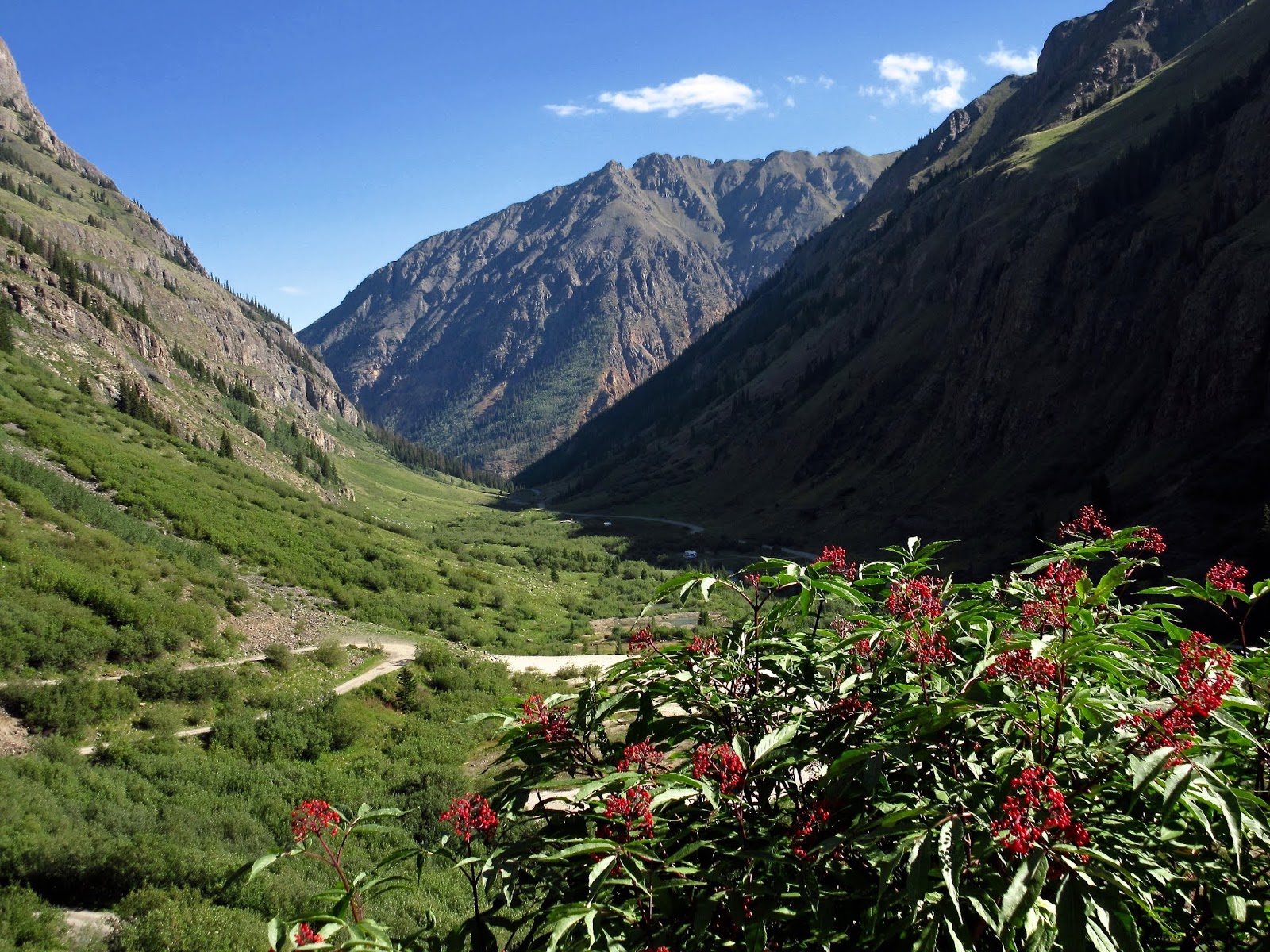 Maybe it's time for a hearing test, or maybe a listening test. Whatever. Who am I to point a finger...

It's a fine day, which, lately, means a slim threat of thunderstorms and only a thin veneer of haze from wretched forest fires that now wreak havoc on the west every freaking summer. Regardless of cause, can we at least agree that our planet is getting too hot for long term habitation?

Bobbie and I pretty much settle on a plan to head beyond Silverton to Cunningham Gulch Road and attempt a yet-to-be-done counter clockwise loop-hike from Spencer Basin to Highland Mary Lakes. At the end of the road we are greeted by no less than a dozen vehicles in a maxed out parking area. Worse, across a rather deep creek crossing (thanks to some industrious beavers), parking at the trailhead to Highland Mary Lakes has additional 4 X 4 vehicles with high clearance enough to ford the "Beaver Lake."  Ok, assuming an average of two to three people per vehicle, I guess we can expect as many as 60 to 70 hiker-buddies.
WTF? That's not a "wilderness experience." 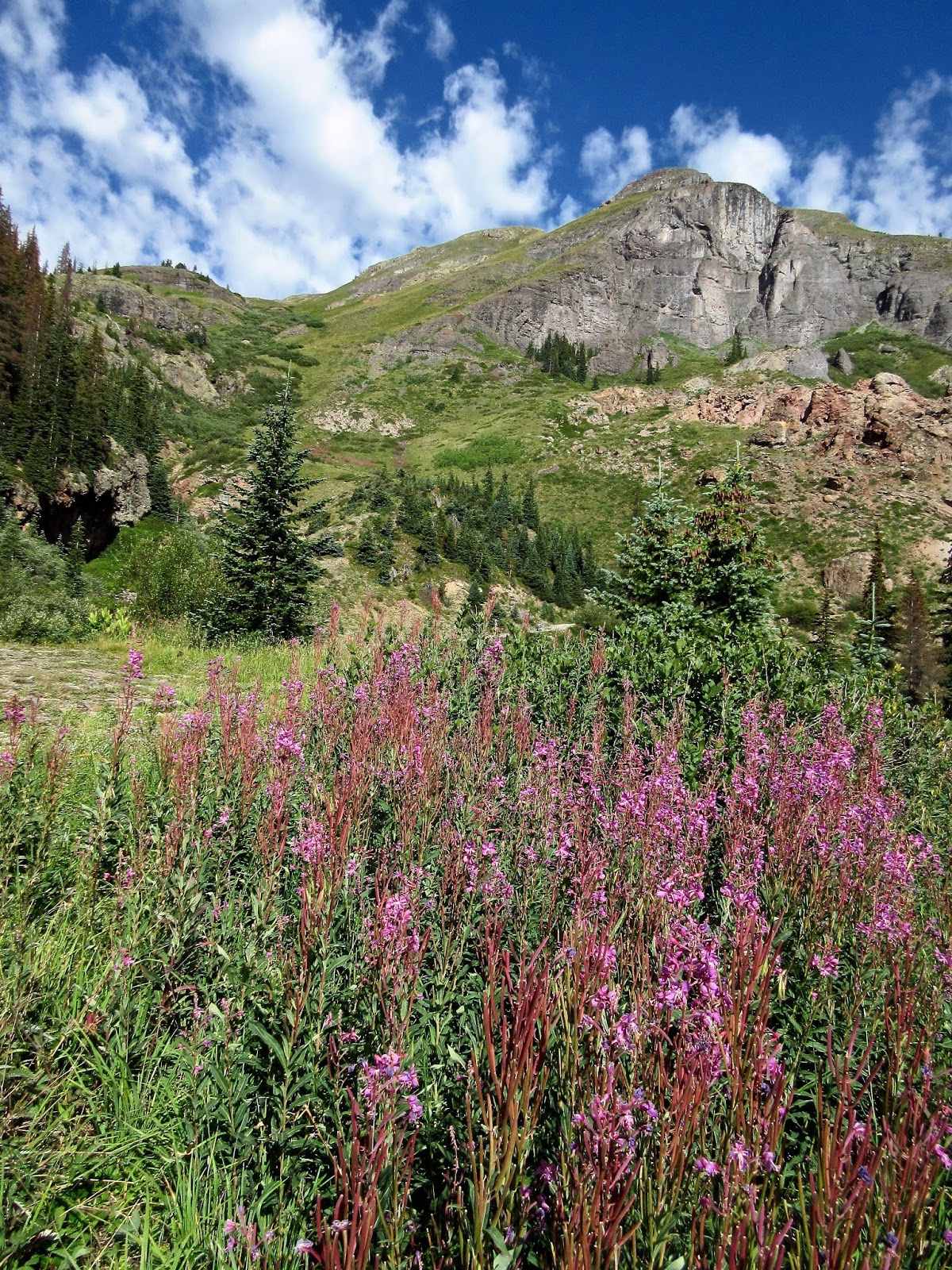 I'm pissed, mutter aloud No way I'm doing Highland Mary with that many Bozos!  I ease forward, carefully grind Sue Bee up a rocky, oil-pan eating 4WD Jeep trail till I find a place to park. From there, it's only a short mile hike Spencer Basin's Trailhead.

After a couple of steep miles on Spencer, a slender unsigned trail veers south. You can see it cross a drainage then head up to a ridge-line saddle that, we assume, eventually lands hikers at Highland Mary Lakes.  But there are no other hikers here. They're all on the main trail, eating dust and dodging people. This is a better way, one would think. 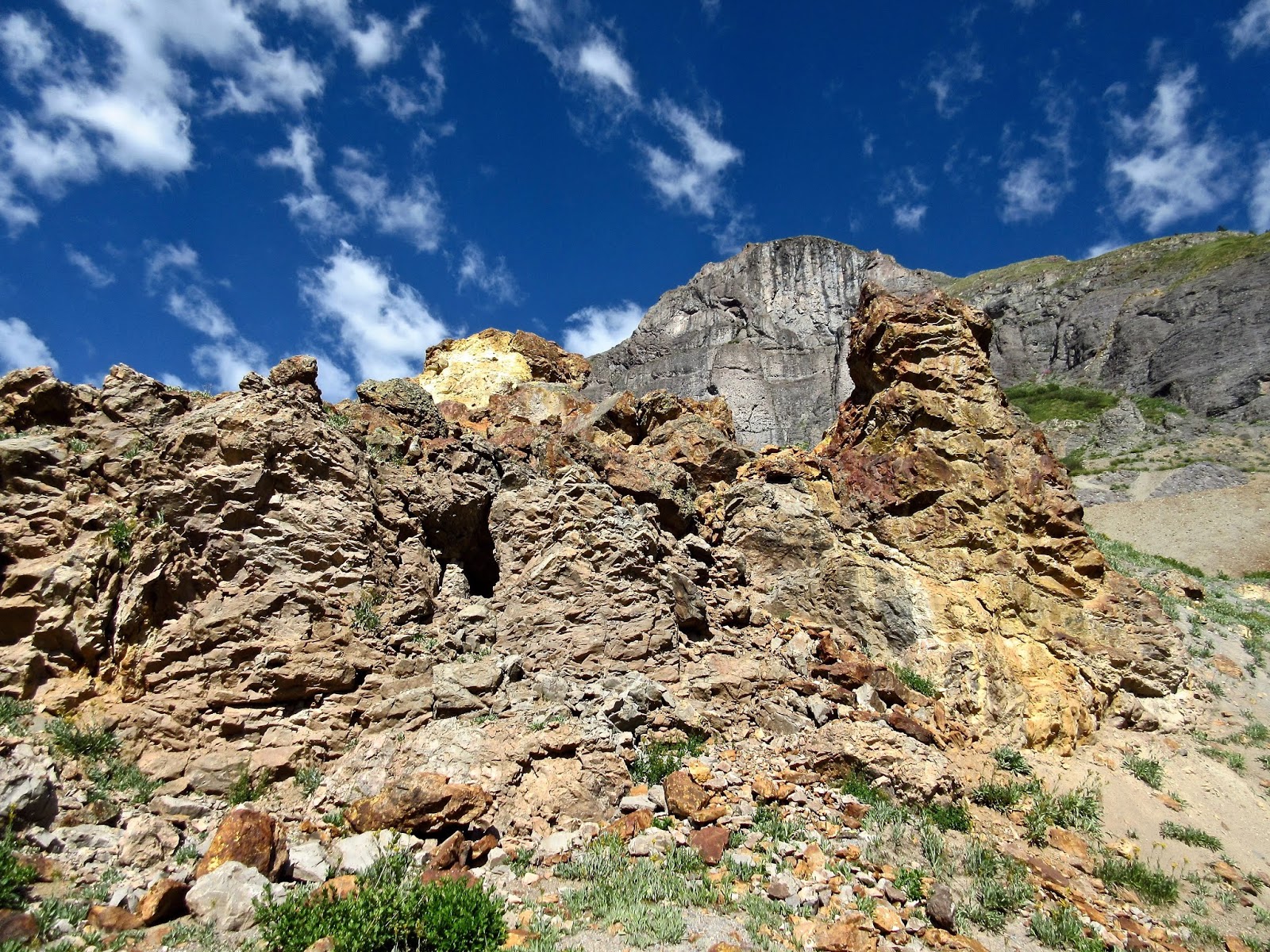 To my recollection we've been up Spencer Basin Trail at least twice but never explored the unmarked trail route to (we assume) Highland Mary Lakes. As memory serves, the first time we continued hiking up beyond an old mine site, then around behind a twin-peaked mountain into an unremarkable basin. The second time we take a right at the mine into Spencer Basin, wading wildflowers on our way up to a ridge-line saddle and an unnamed 13er (13,400, to be exact). It has a great view of Kendal Mountain, another 13er. 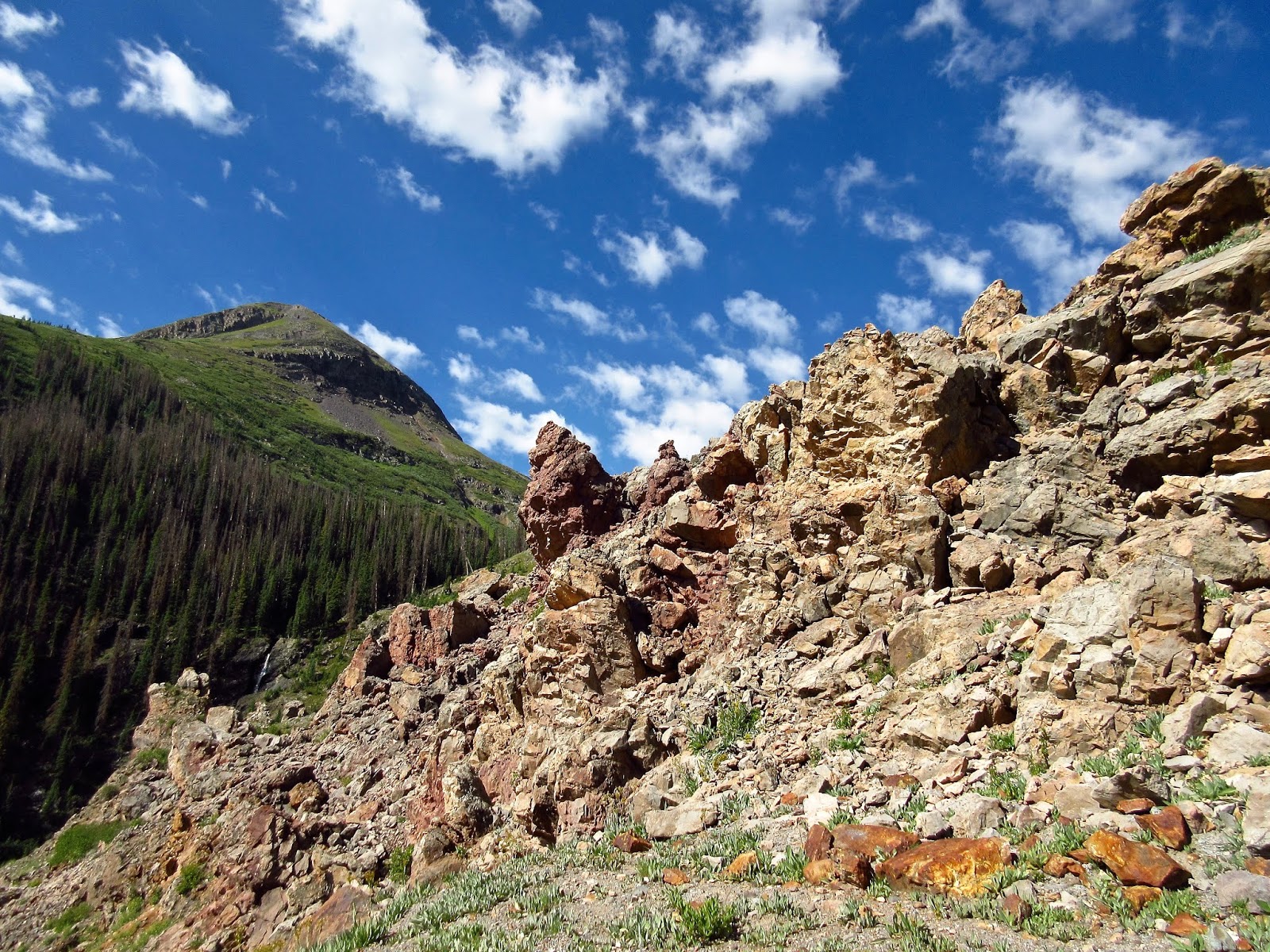 But Bobbie disagrees, says we've only hiked Spencer once. Hmmm. I'm sure she's wrong but swallow any kind of response. If you are lucky enough to live long enough, you will become wise enough to wage only battles of life and death importance. Thus, with clenched jaw and zipped lips, I decide to quell the riot of internal argumentative demons begging to see a fight by cutting off their air supply, which means, hike like a rabid bat-out-a-Hell is nipping my neck.  If history is indeed a predictor of future events, endorphins will soon kick in and I'll be as mellow as a kitten lapping up a saucer full of cream. What argument? 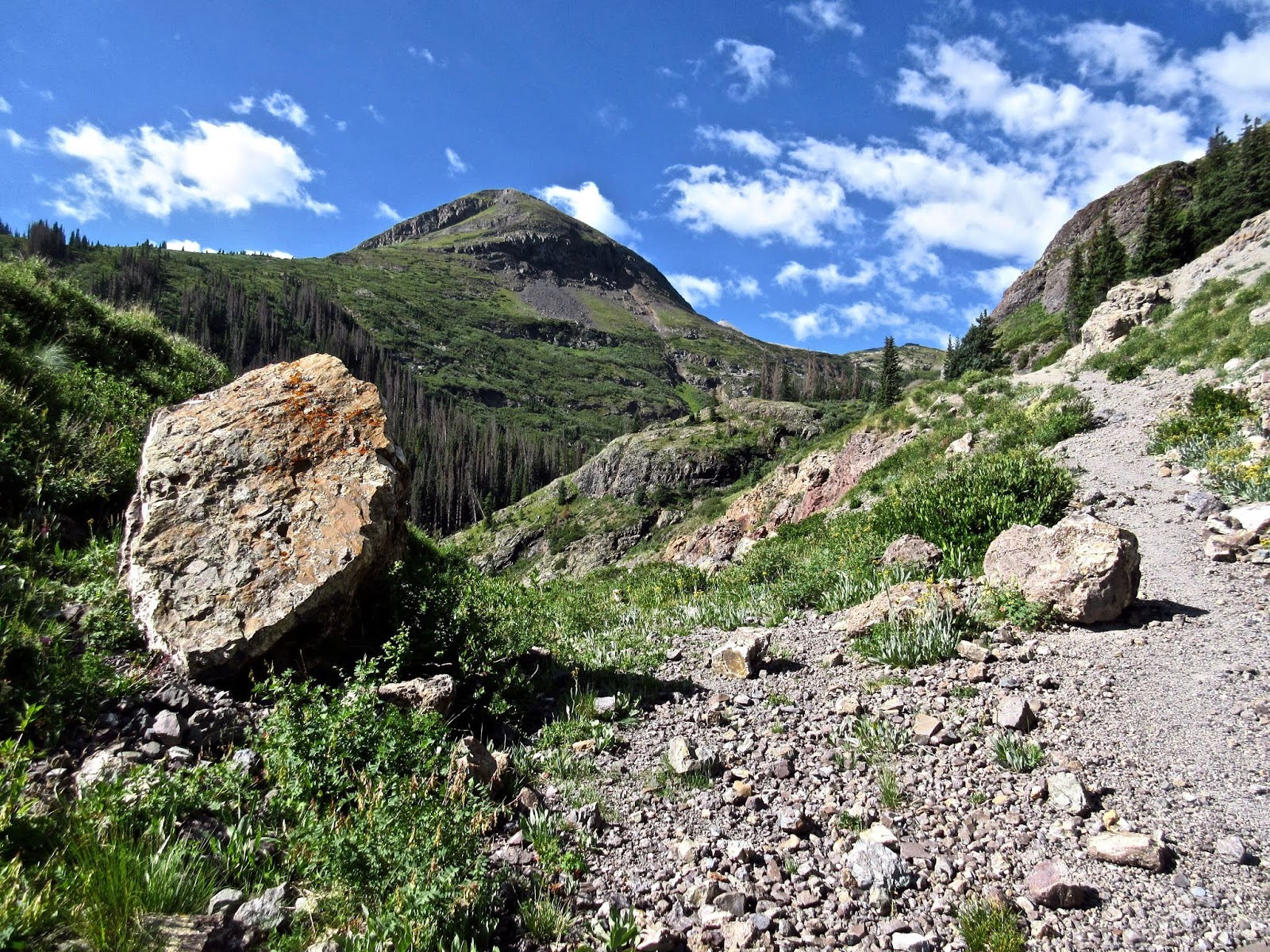 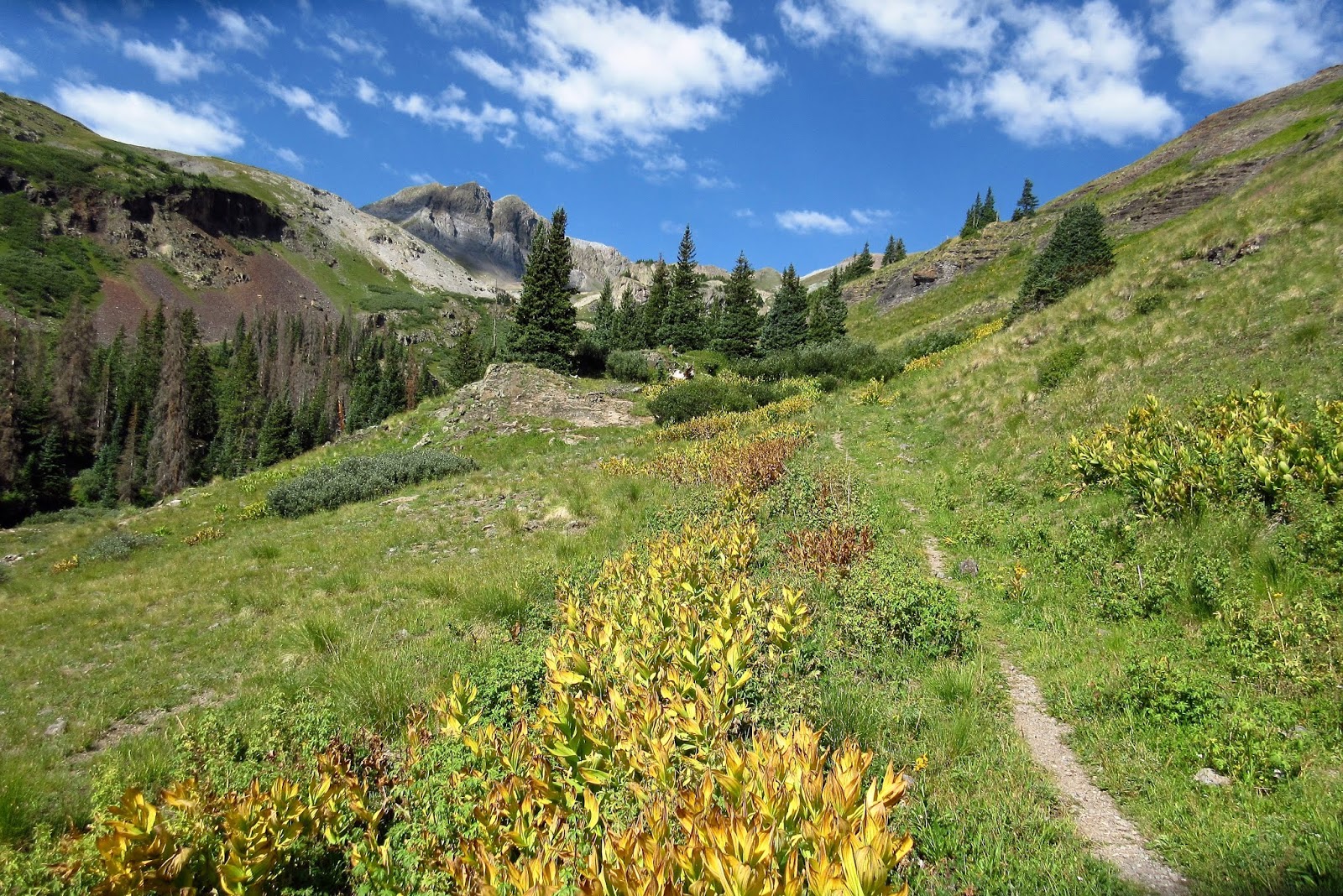 I divert the surge of Fight or Flight adrenaline from mouth to legs and proceed to shred the trail to Spencer Basin. In my haste I zip past the rock arrow that points to the unmarked trail that, we assume, leads to Highland Mary Lakes. I hasten on up to the old mine site, pause and look back for Bobbie. Seeing no one I carve an arrow into a bare patch of ground that points to Spencer Basin and resume shredding.

There's no trail now so I pick the path of least resistance and keep the pedal to the metal. We hiked this before many years ago. She knows the way... 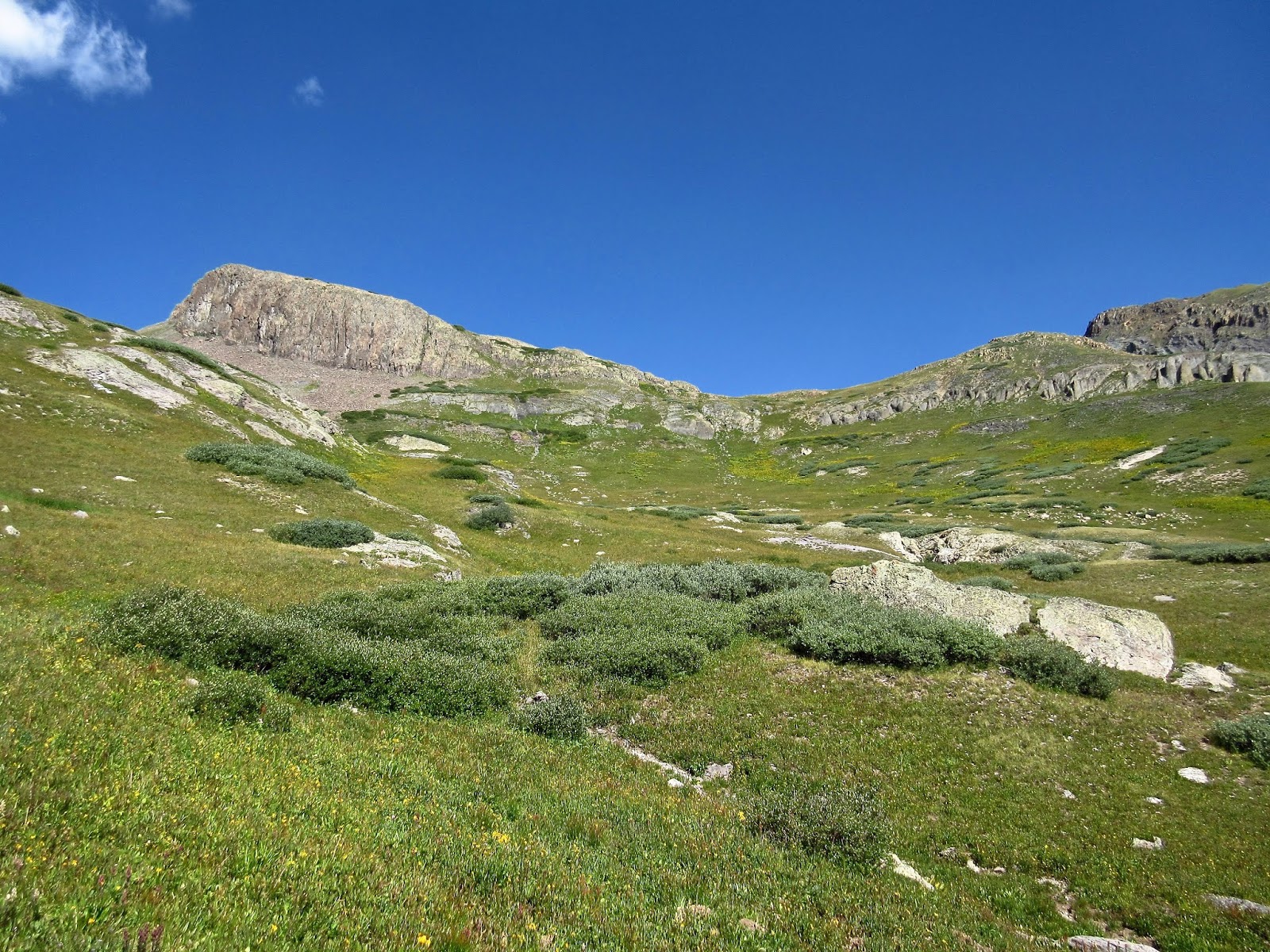 Boy do I feel smug. Instead plodding along in the dust of a herd of lowland "sheeple," I have this glorious basin all to myself.

Which serves to remind me, where's Bobbie? 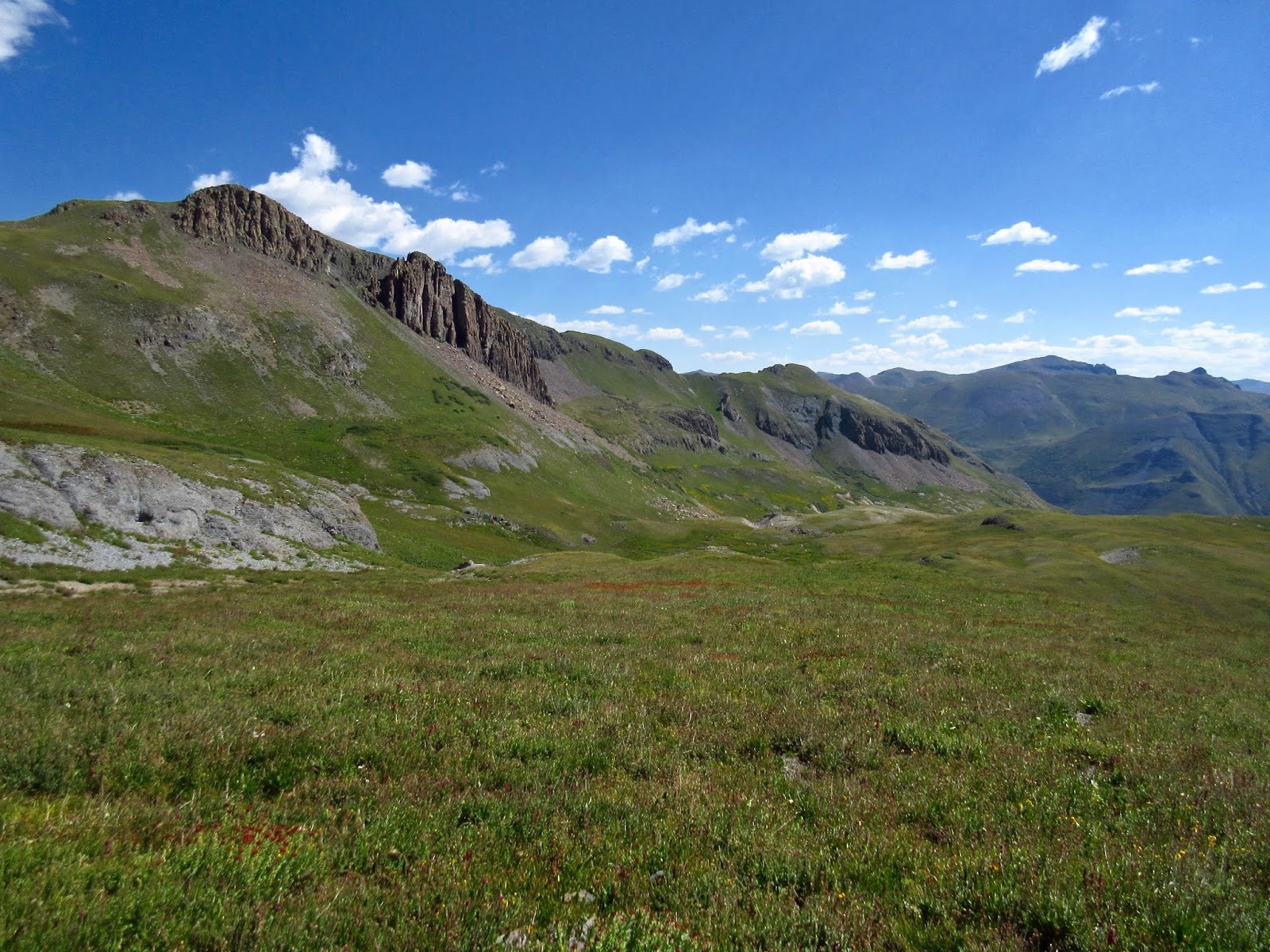 Maybe she's having an off day, I think, just taking her time and smelling the fireweed.

The tundran gradient steepens. It's relentless, but I'm on a demon killing mission. They'll be dead any minute now.

About that time I start to feel a little dizzy. Assuming it's low blood sugar due to skipping breakfast, I pop a caffeinated Shot Block. The ridge-line saddle is over 13,000 feet and I'm almost there. For some reason it seems harder than last time. Can a decade make that much difference? Apparently so after a "certain age." What year was that? Bobbie will know, I'll ask her...when I find her.
I can see for miles and she's nowhere in sight. Hmmm.

I gut-out the last couple hundred yards on hard-pack, traction-less bare ground that sends me slipping two steps back for every step forward. Finally the saddle is mine, one hour, forty minutes (insert fireworks here). I'm welcomed by a gale force wind and stagger toward on toward the un-named 13er's summit.

Arrow and Vestal and the rest of the awesome Grenadier Mountains poke the southern horizon. I have them all to myself...which reminds me again that Bobbie is AWOL.  Bobbie!

My wind-buffeted, weak-kneed course to the peak is one of a drunken sailor. I can see Engineer Mountain way to the southwest, and the due-west mass of Kendall Mountain with its familiar scar-of-a-road zigzagging up the south face. I recall all the yesteryears that Bobbie and I ran that road up Kendall Mountain during the annual Miner's Days Festival race. 13 miles, 6.5 up, 6.5 down. Down was more difficult than up, believe it or not, fighting momentum and gravity and broken ankle boulders.
Where is that woman, I worry. 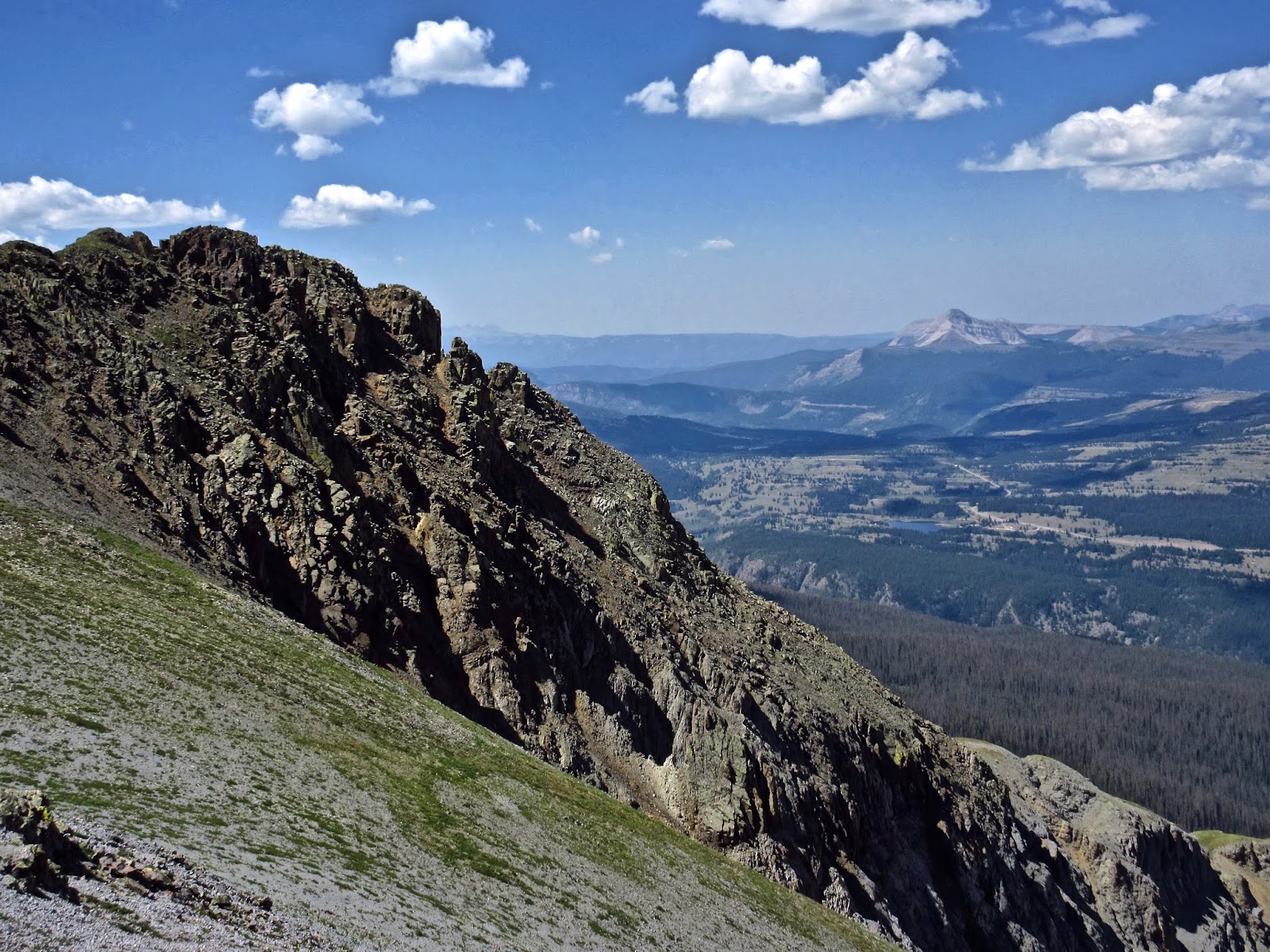 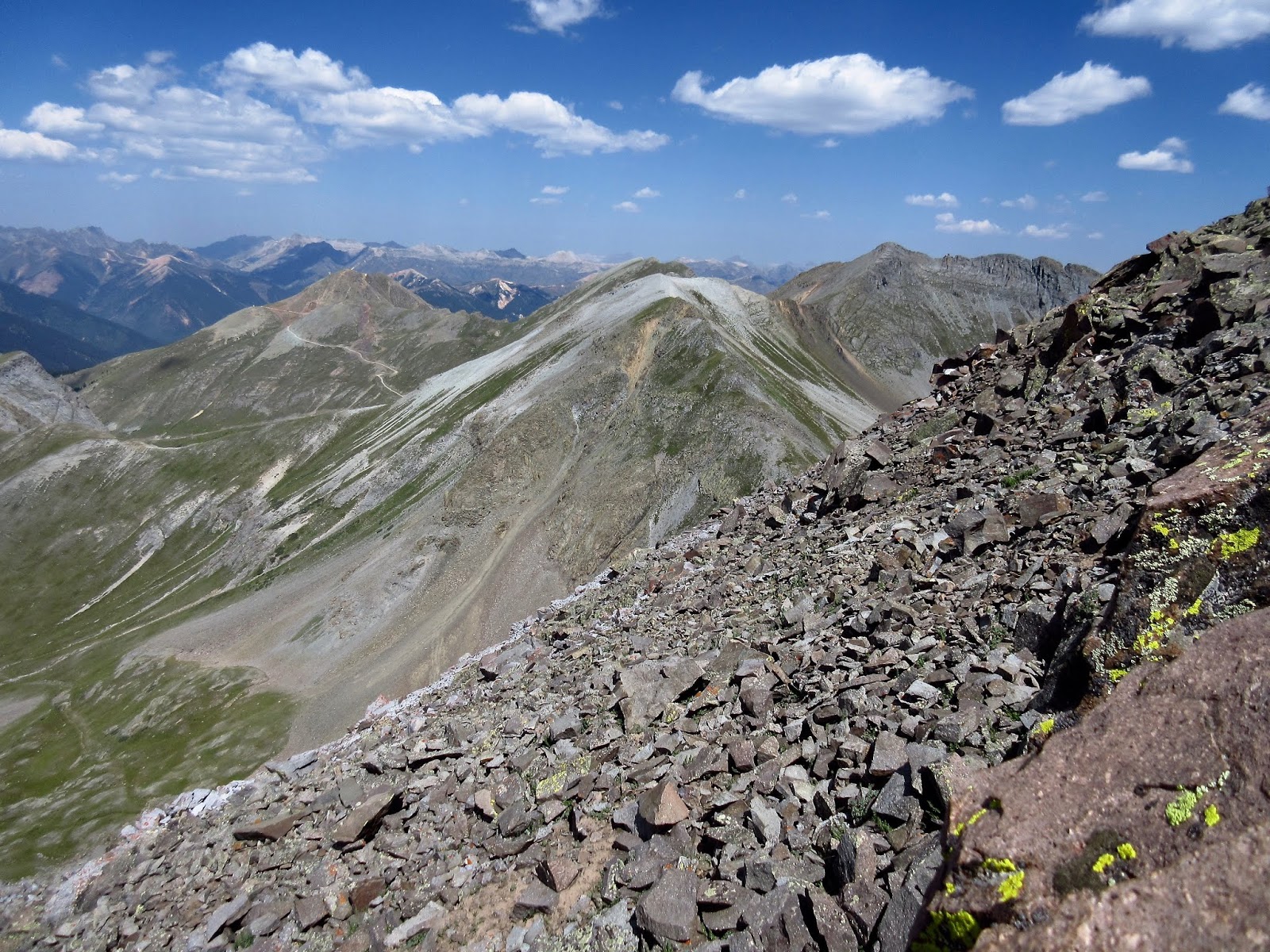 Feeling unsteady, I take shelter from the wind among some rocky spires. I feel like I should start down, just in case. But it would be a shame to not spend time after all the effort to get here. A couple more steps nearer to the summit I plop my pack and ass down again. I devour a Cliff Bar while gazing off to the Grenadiers, zooming in on Yosemite-like slabs of granite... 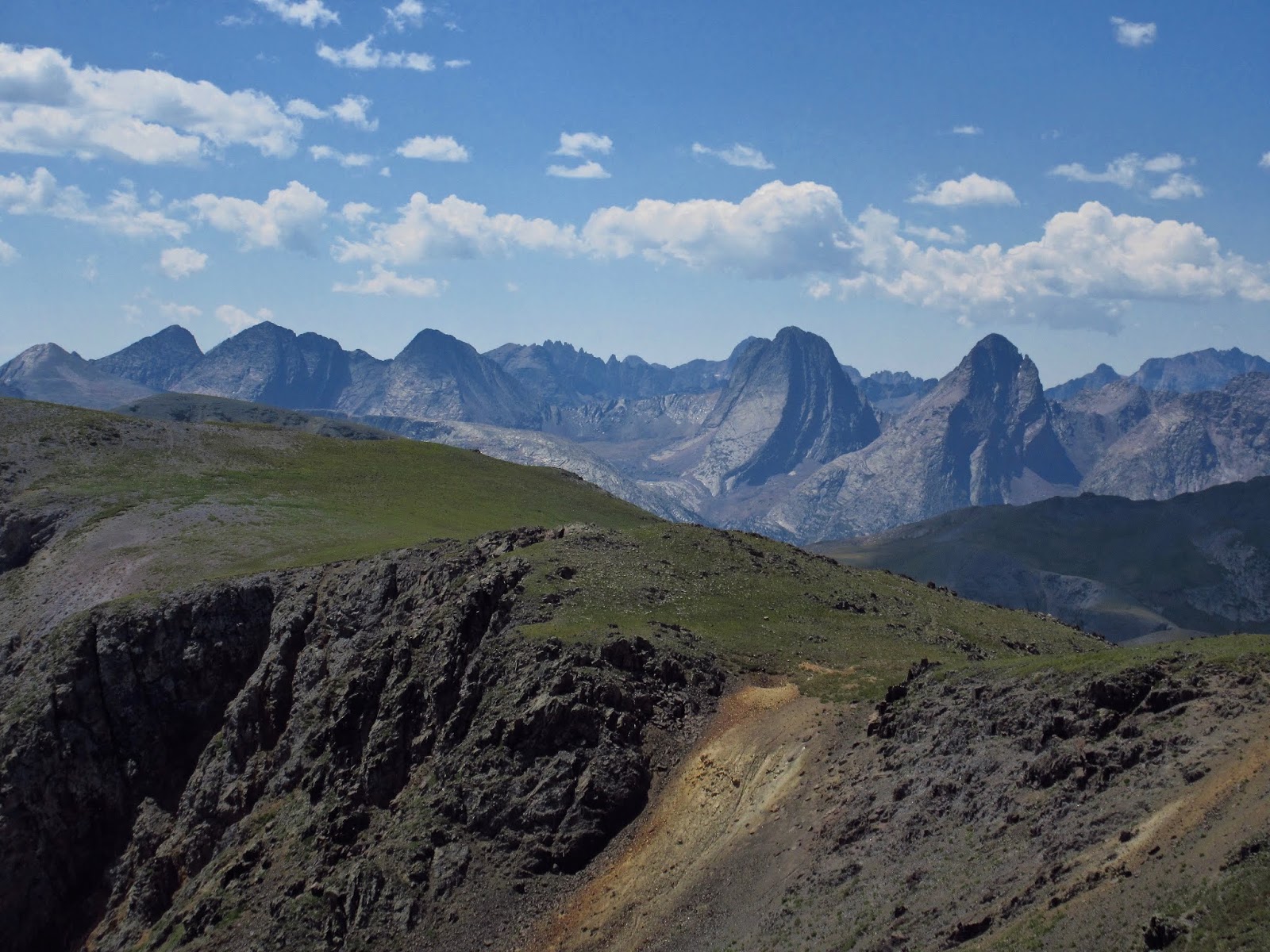 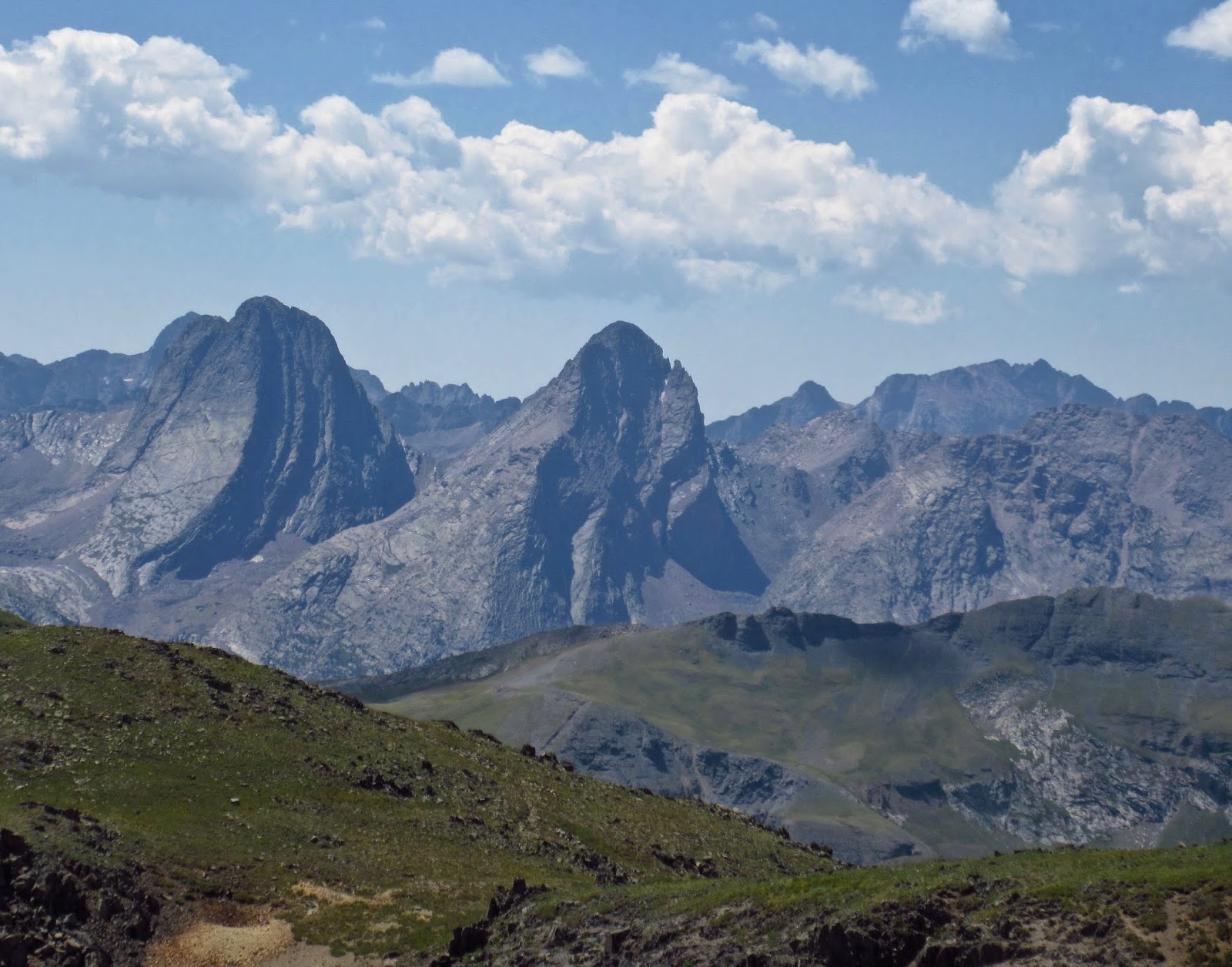 I decide to play it safe and forego the summit due to wind and wooziness, descending via a more northerly route in hopes of catching a glimpse of Silver Lake from the north flank.

Shortly, I'm mired in a slope of tipsy boulders on shaky legs. I feel lightheaded and weak...and alone. Out of an abundance of caution, I slow down and focus. A few steps and I'm forced to sit again. Low blood sugar? Dehydrated? Altitude sickness? Did I come up too fast? I opt for another Shot Bloc, gambling that its a blood sugar thing (thank you for that genetic defect, Mother Dear). 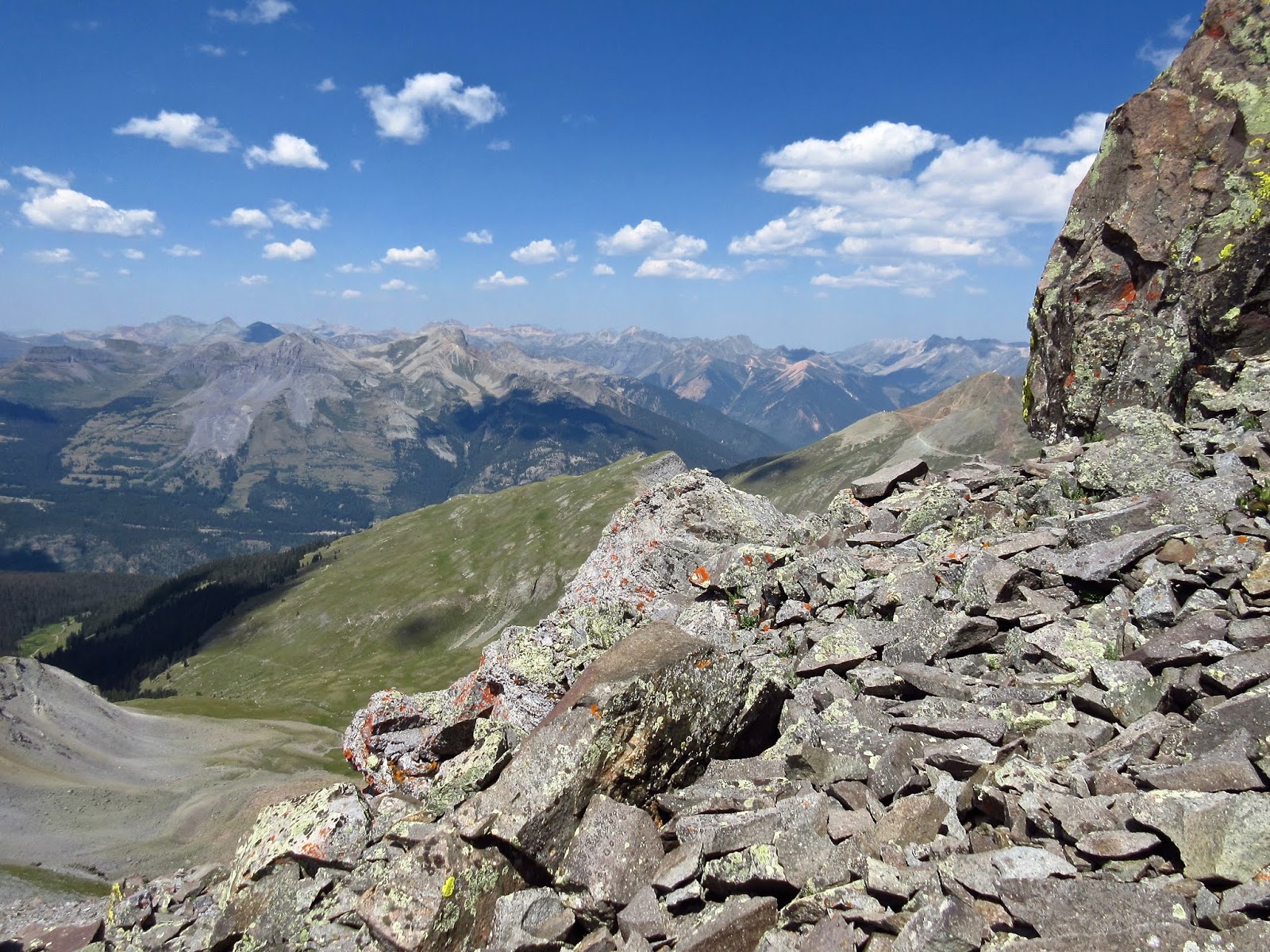 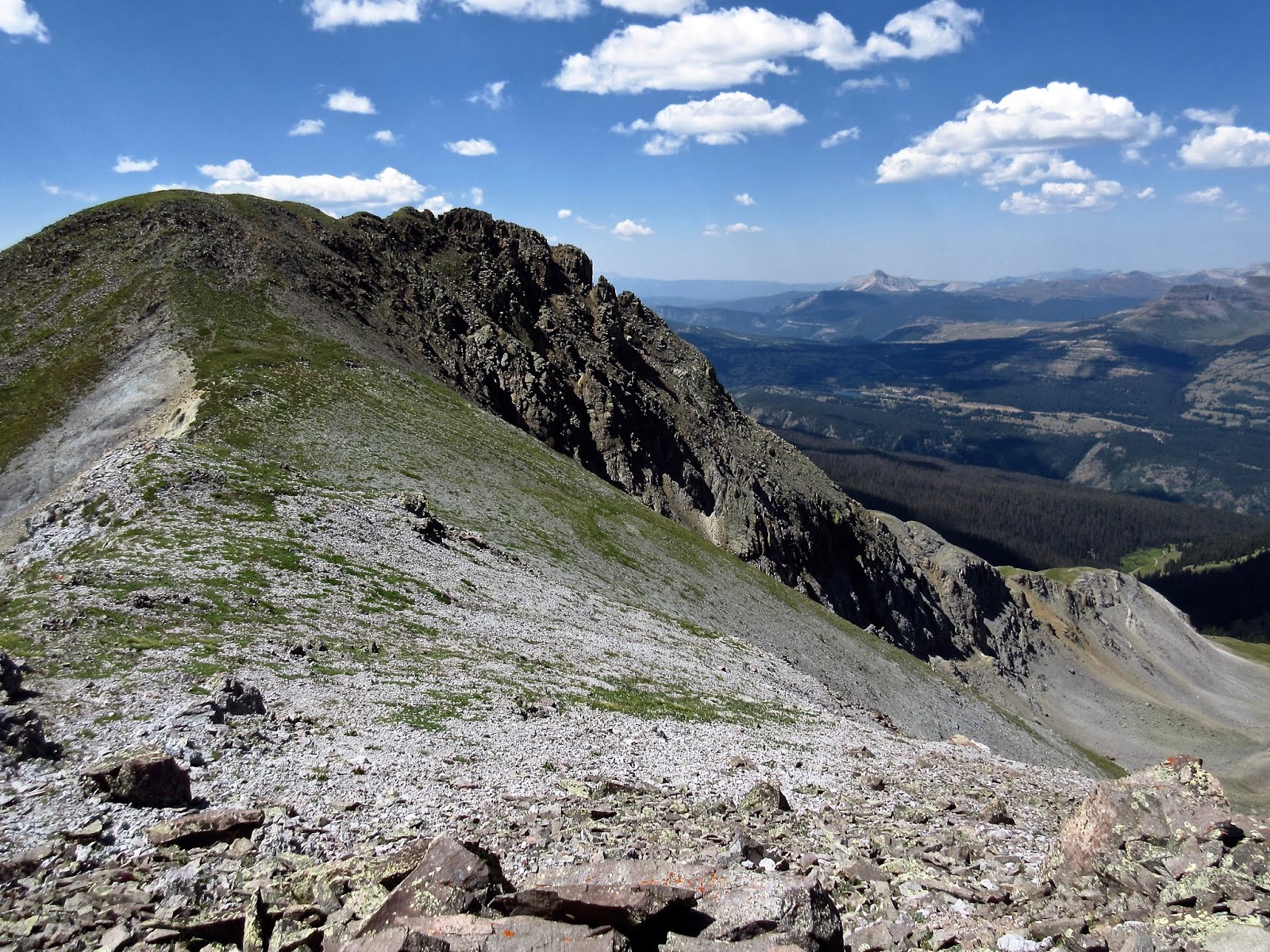 After a 10 minute break, I decide to pass on Silver Lake and make a slow, step-by-step descent to get down, down, down....just in case it's altitude sickness that's making me ill (though I don't feel headachy or nauseous).

I pull hard on my hydropack in case it's dehydration (I haven't peed all day). I've got at least 2500 feet of elevation to lose, most of it steep and loose, which, to me, is more taxing than going up. I stop a couple more times due to lightheadedness and shakes, choke down another Cliff Bar. A couple more photos and I'm done in. I put the camera away and focus on getting my body to lower altitude.

How ironic that only 30 minutes ago I was Tough Guy, reveling in being alone above 13,000 feet.
Not so much now... 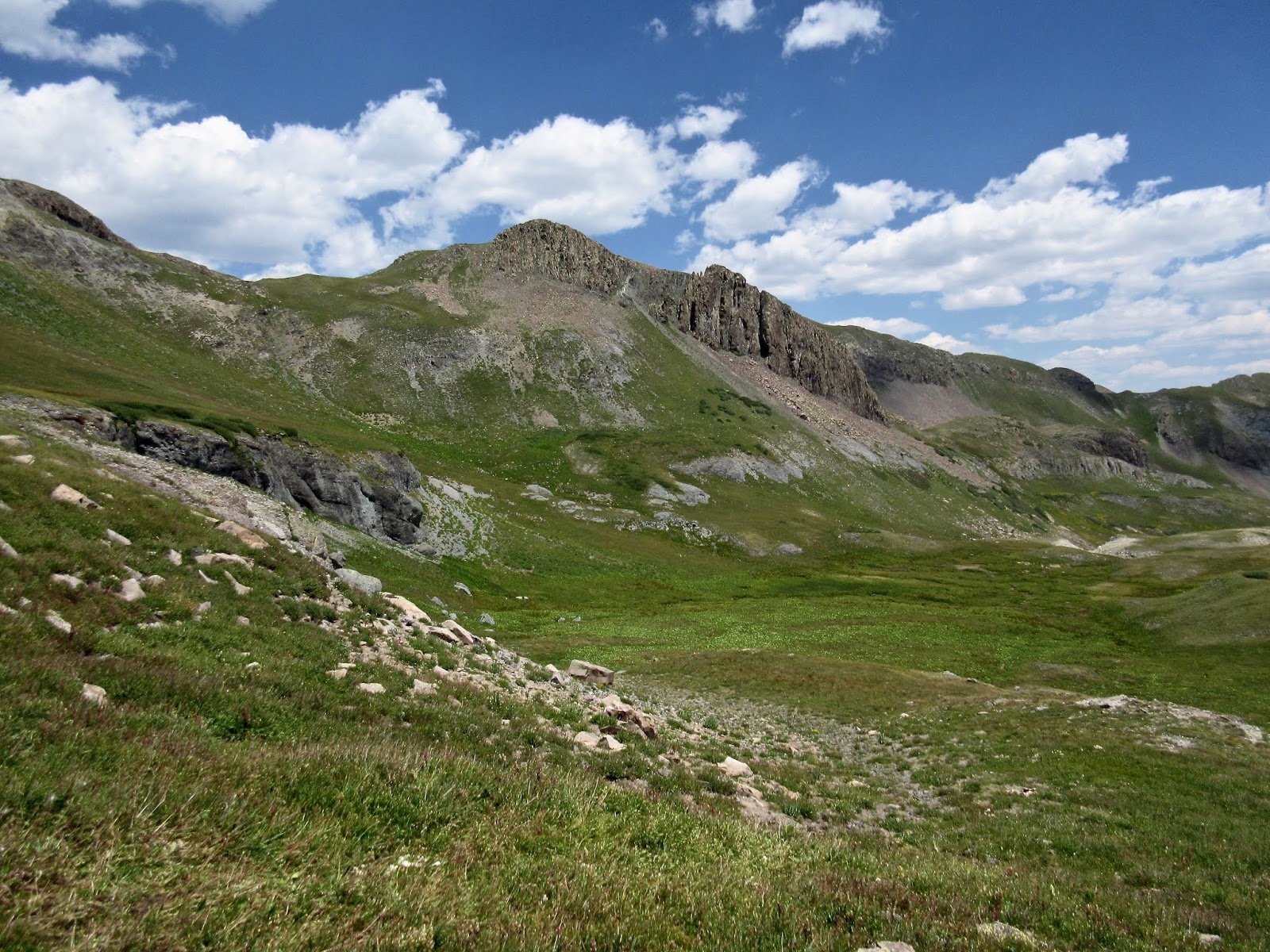 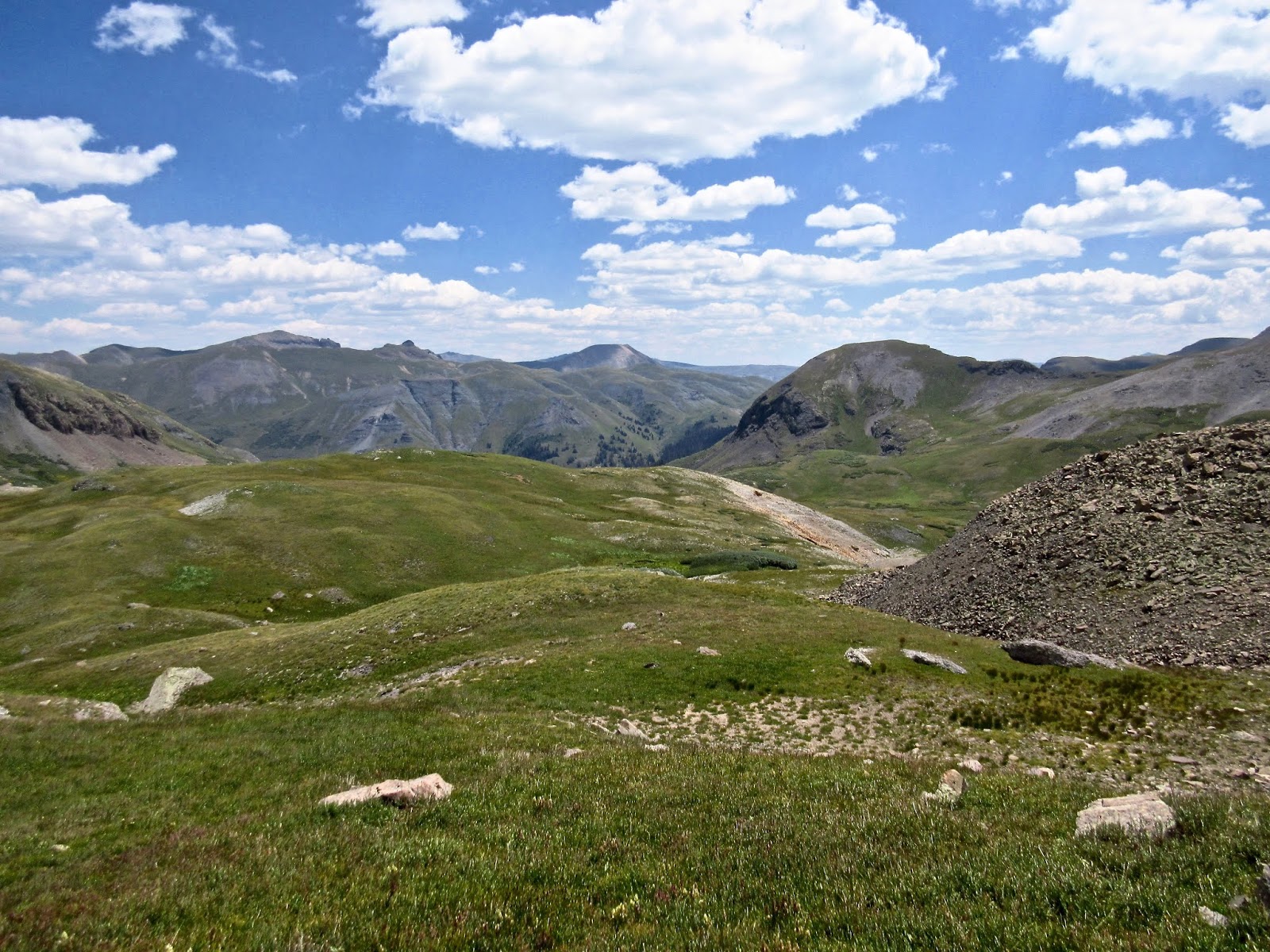