A Gem of an Idea 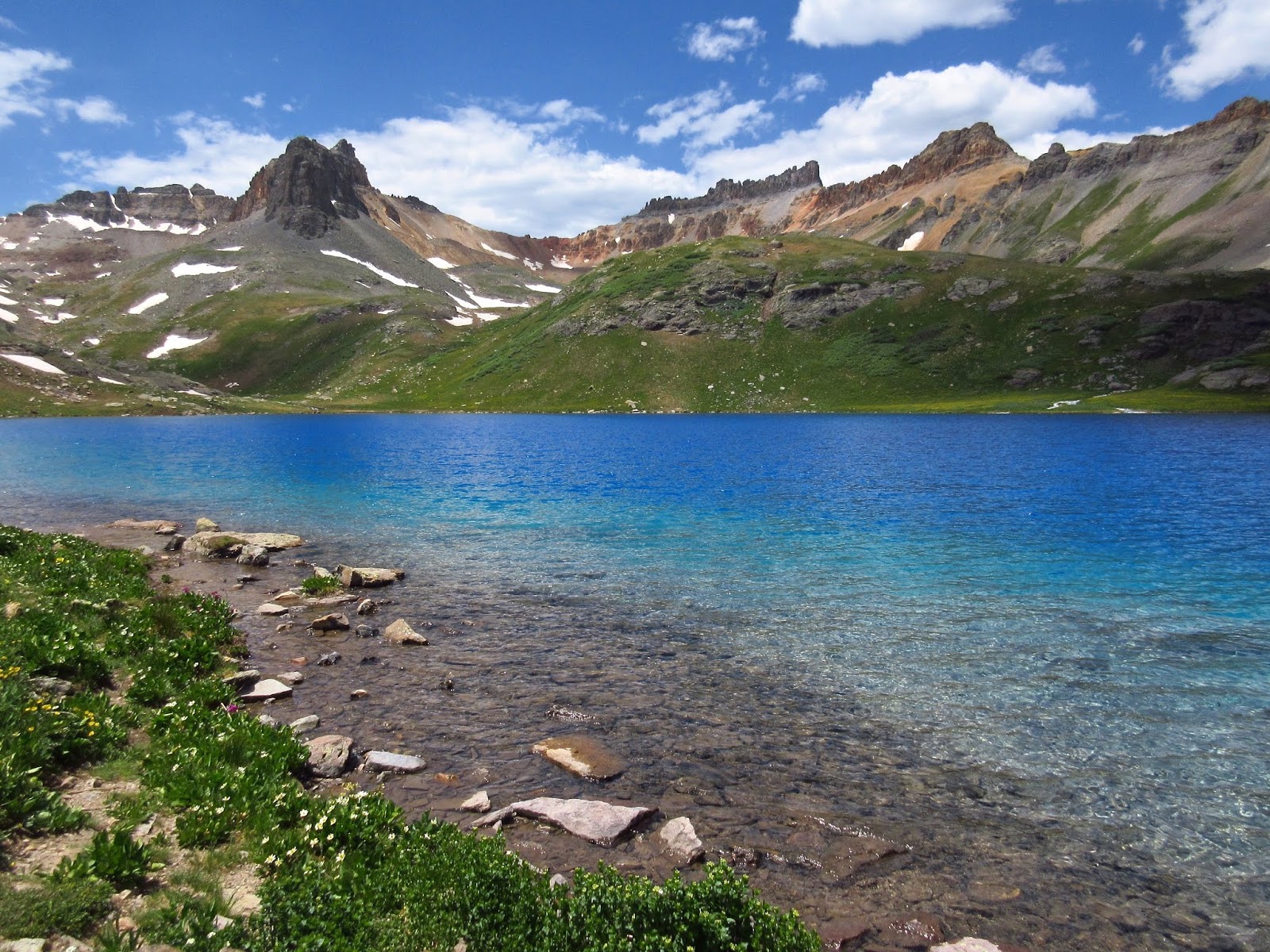 "Time itself is our tragedy and most of us are fighting some kind of war with it."  The Faraway Nearby, Rebecca Solnit


Colorado mountain summers are short. They are candles, meant to be burned at both ends and the middle. Perhaps that explains why it's getting so hot around here.

On the heels of our previous adventure—having seen that the less-than-stellar wildflower season was sporadically underway—I thought we should make an early attempt on one of our favorite hikes. Period. It's numero uno. Even if I at some point in the future declare it has been demoted...in spite of it being on Page 1 of any kind of Google Search that more or less says, Best place for viewing wildflowers in Colorado. How (dare you) ever. More than the (normally) abundant wall-to-wall proliferation of wildflowers, it's the setting. Enough to send a grown agnostic weeping to the alter.

But first, we must hike our way up, up, up to tundra above timberline, and that goes a little something like this... 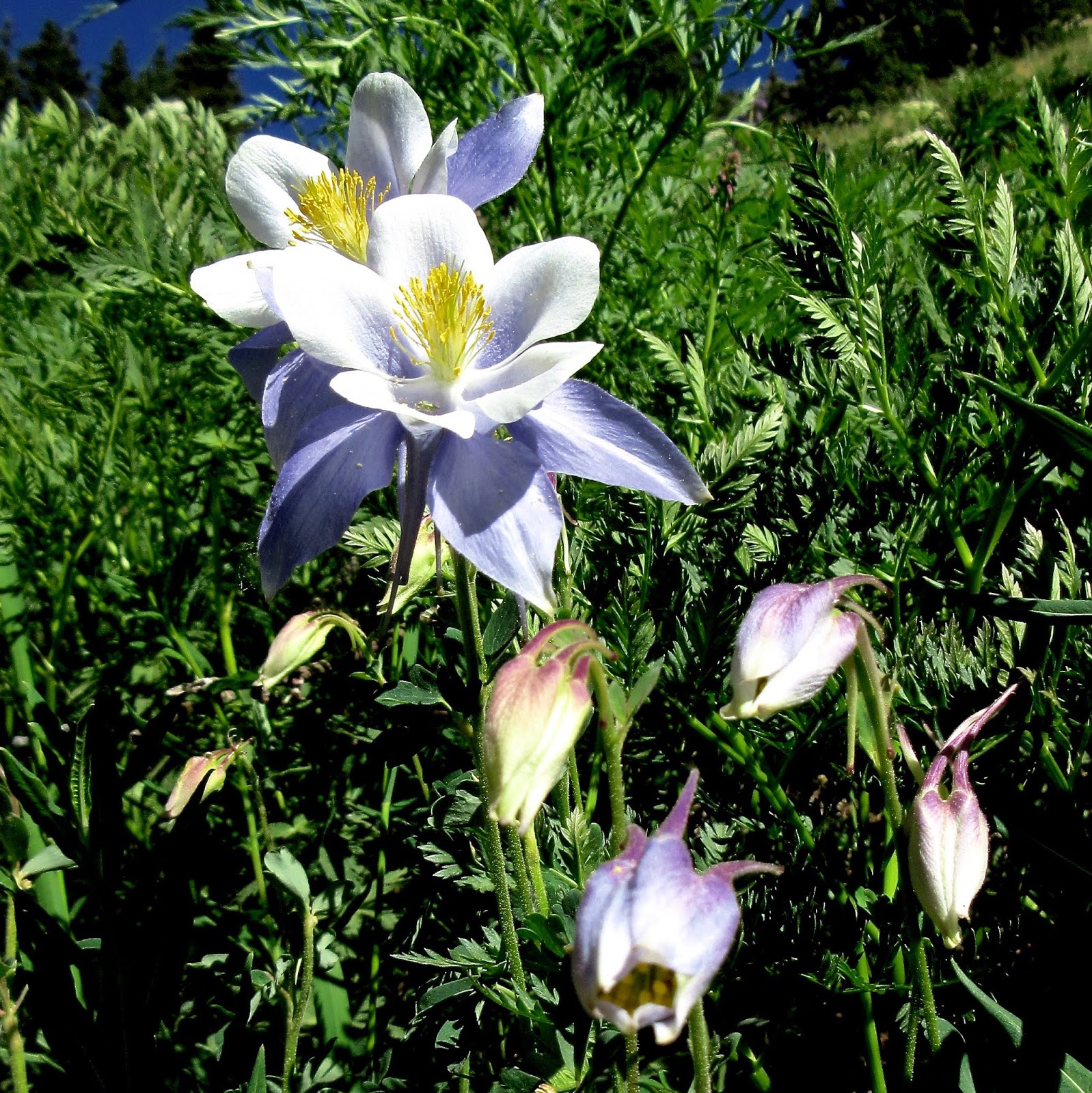 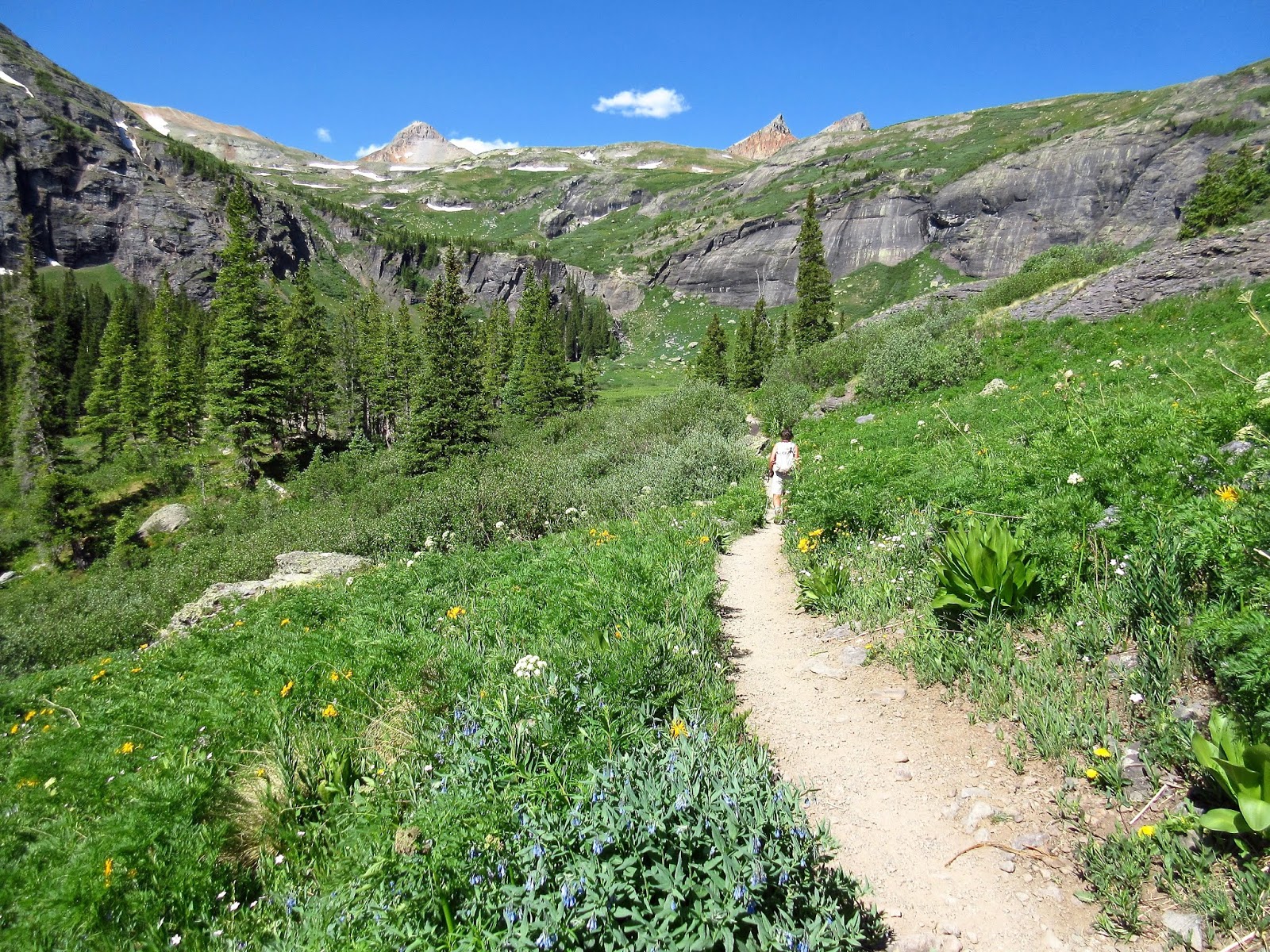 We are treated to a circ, a mountaineering term that means "glacial in origin." It's a fitting tag because, regardless of origin, the basin is semi-circled on one end by towering, ragged ridge lines and peaks. They are among the most beautiful, colorful and astounding I've ever laid eyes on...and trust me, I've laid these "baby blues" on more than a few purdy mountains.

Noticeably absent are thickets of cadmium yellow, neon orange and blinding crimson paintbrush. Perhaps they are tardy. Or perhaps there will be no super-bloom of paintbrush this season. It's sad because they play a significant part in "The Show," kinda like the play Hamilton without  Lin-Manuel Miranda. 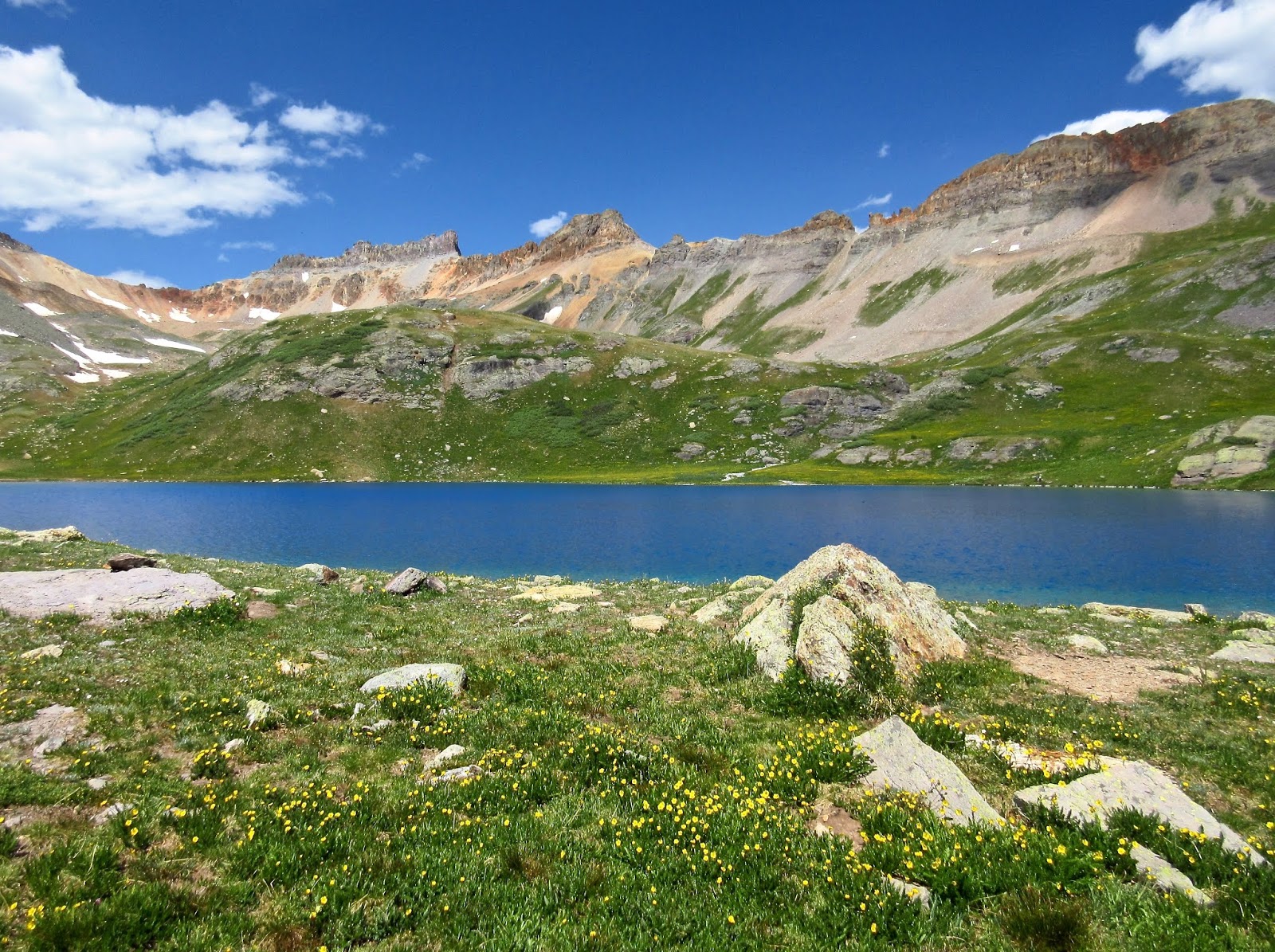 May I present the sapphire-tourquise-cobalt (help me out here) Ice Lake. Suddenly I forget all about absent paintbrush (and breathing) as I rush the shore giddy as 7 year-old kid at Disneyland. I've never seen it this, this blue, I say to Bobbie, then turn it into a question, have we?, because we probably have but I'm such an overreactive emotional schmuck.

And "blue?" Such an understatement. There are no adequate words for the colors in Ice Lake.

Eventually my eyes are pulled above the water to gaze at the equally stunning rusty circ. Streaks of tundra and scree stream down like tears. An awesome needled ridgeline, sandwiched between (a slightly inferior) sky "blue" and lake sapphire. All we need are a few clouds. Oh, there they are! 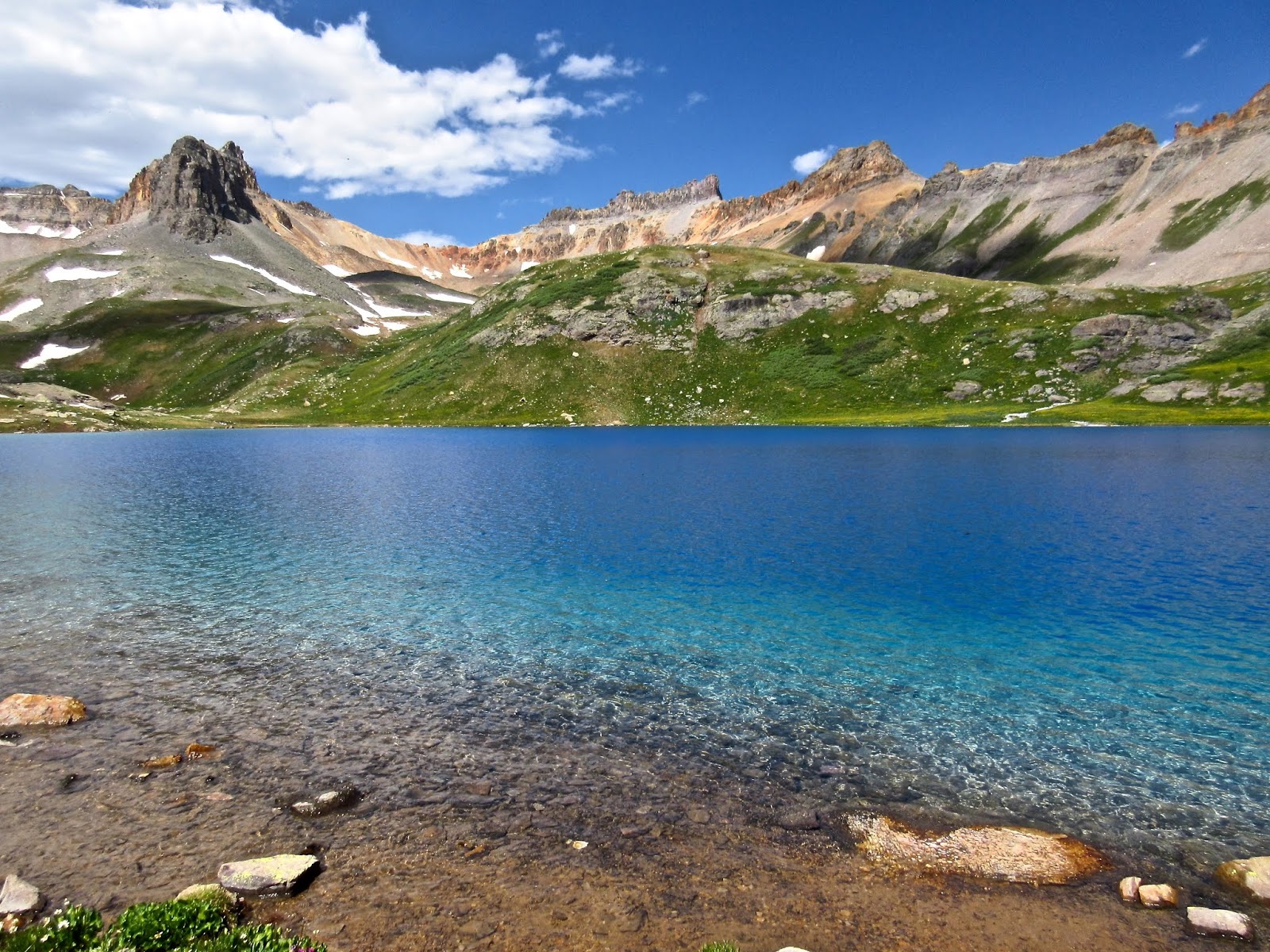 Across the lake a couple disrobes and plunges into water only weeks from being solid ice. I remember Leon doing the same a couple-three years ago. I am not the man he is, apparently. 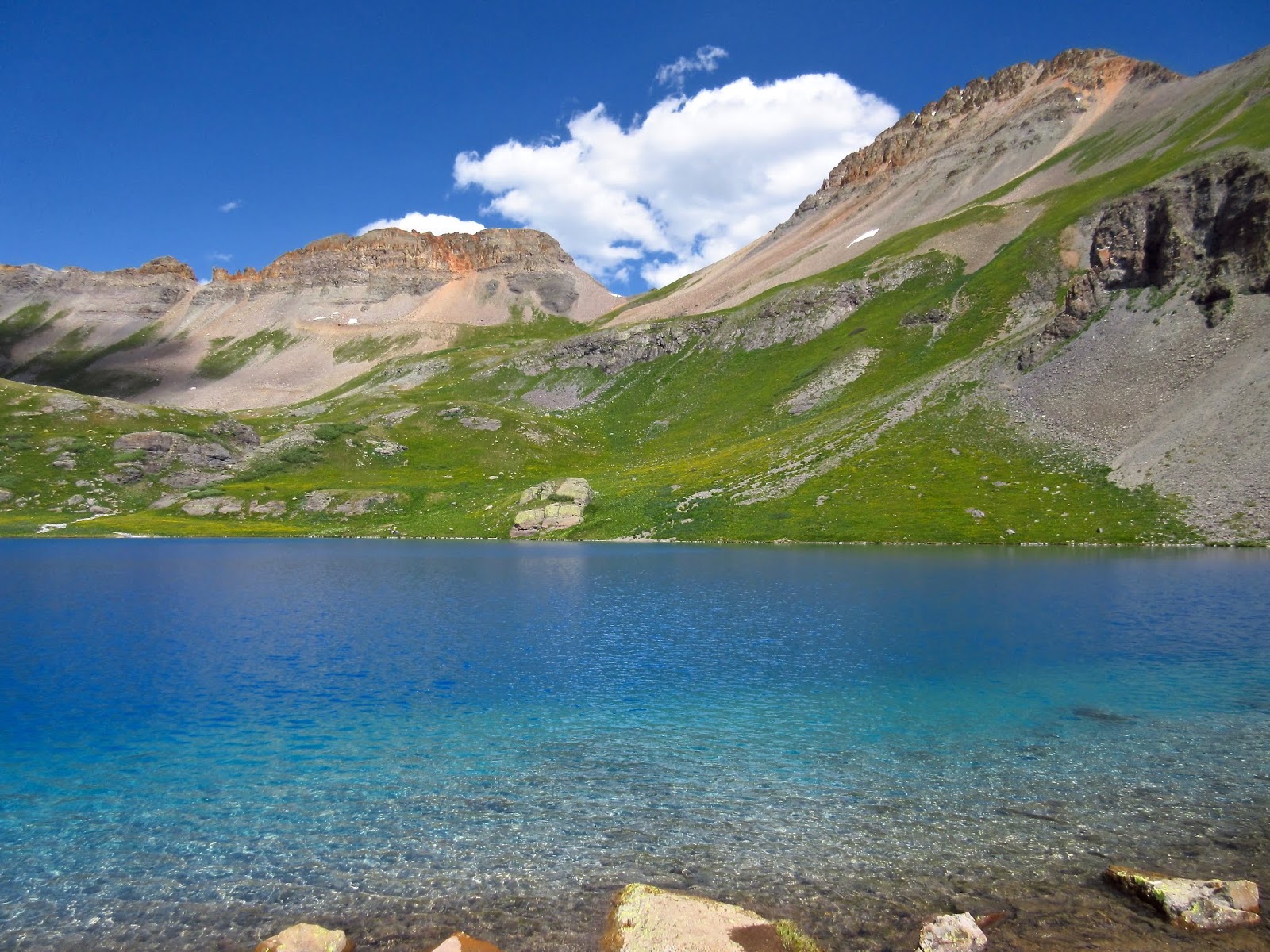 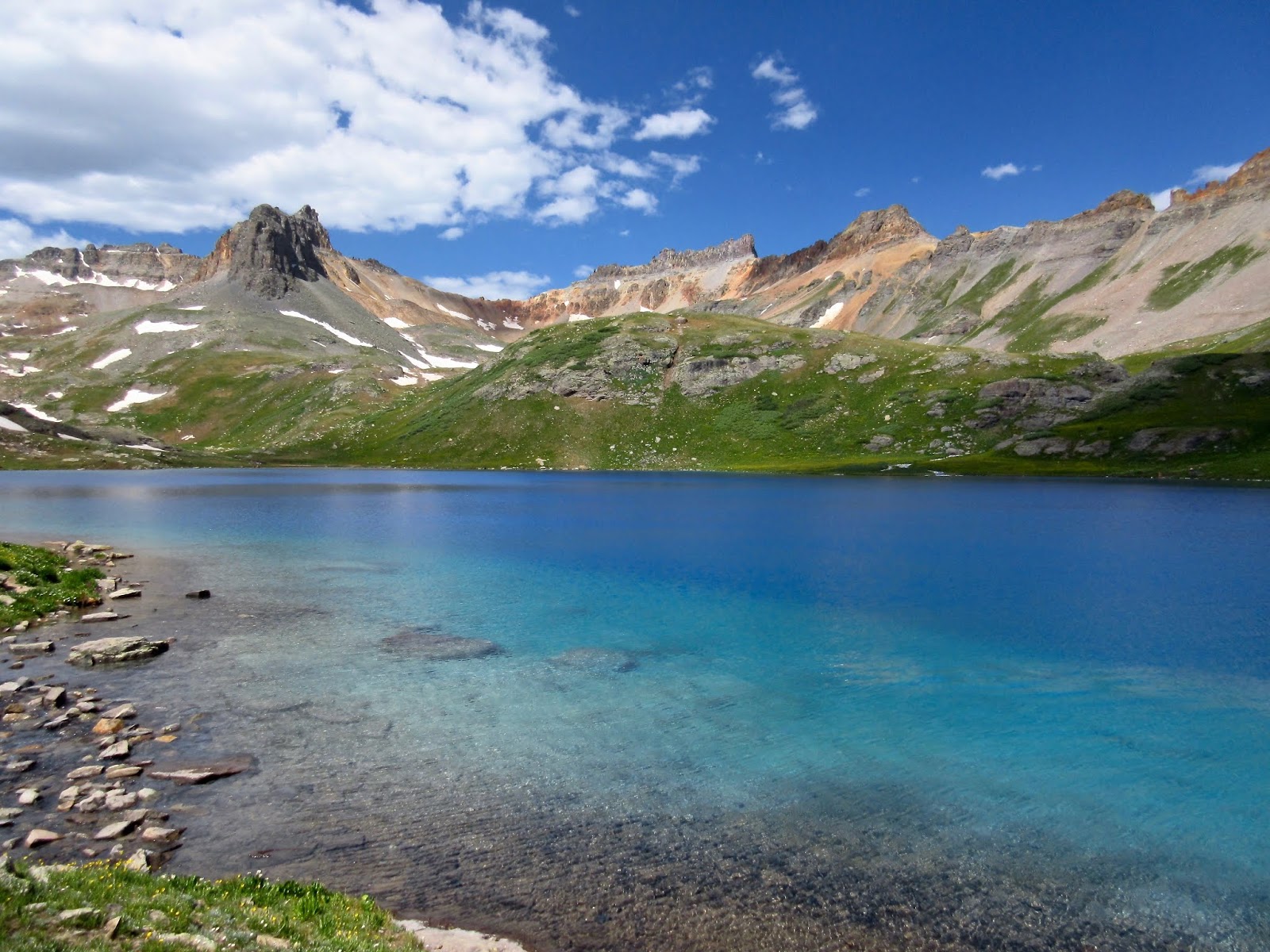 I feast on this visual and visceral buffet, trying to wrap my head around seemingly arbitrary human concepts of beauty, and its opposite, for that matter: What if our eyes had not evolved to distinguish color...would this still be so attractive? Why do we have Ice Lake almost to ourselves? What if there really is a God?

Another mile up the trail is Island Lake. We've come this far, might as well have a look. Though nothing like a normal wildflower season, a few managed to grace our hillside trail on the way up. 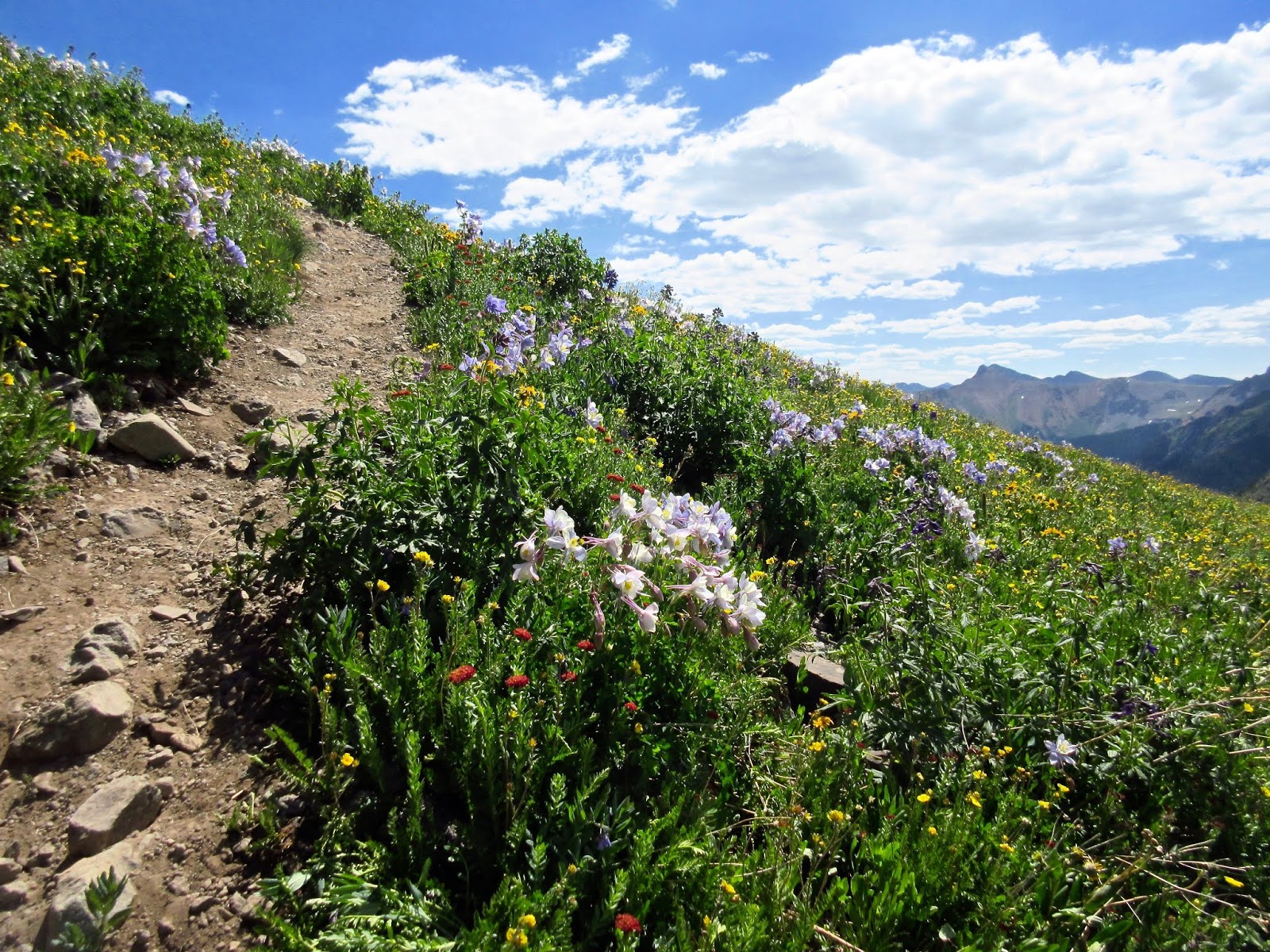 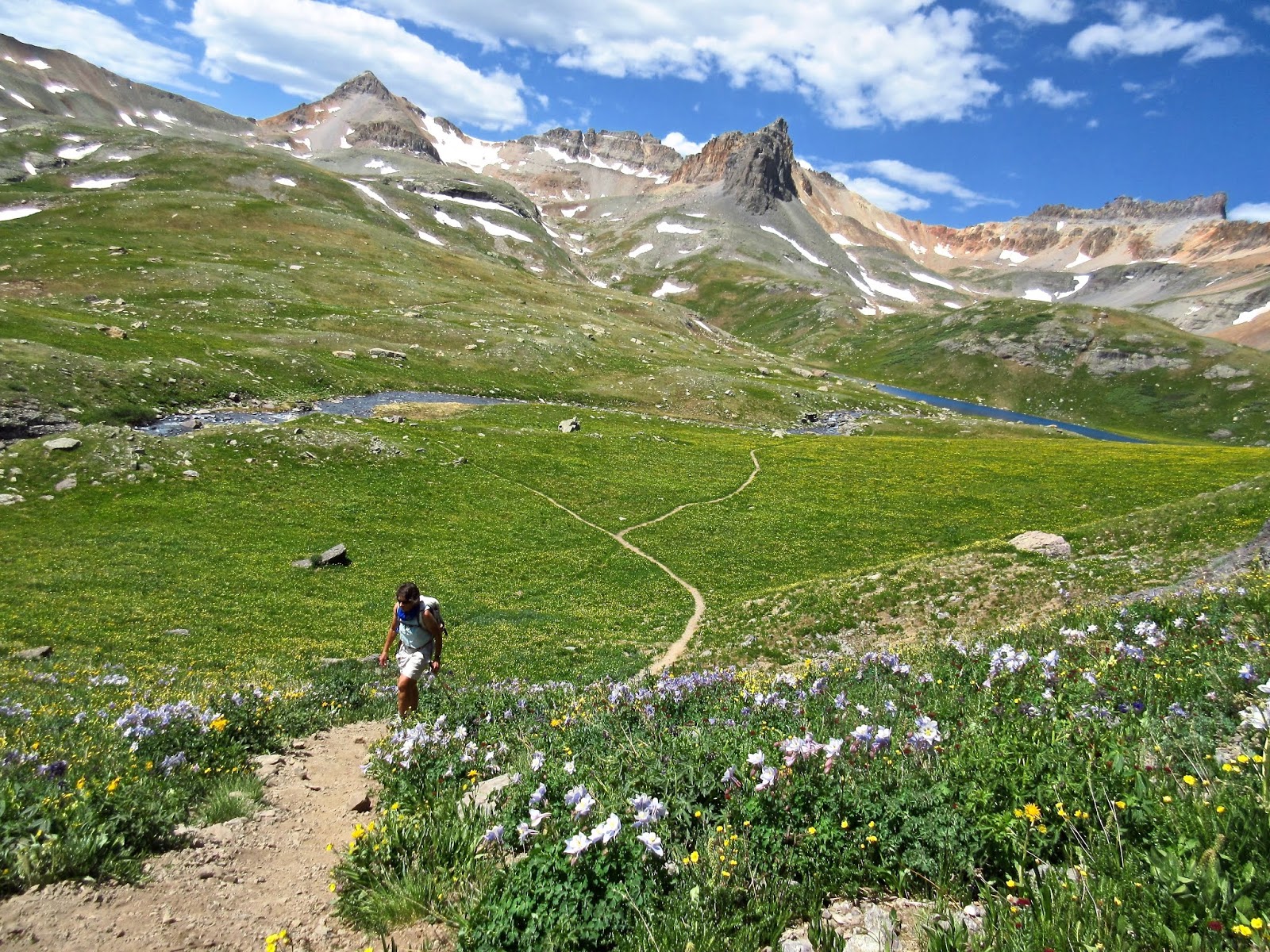 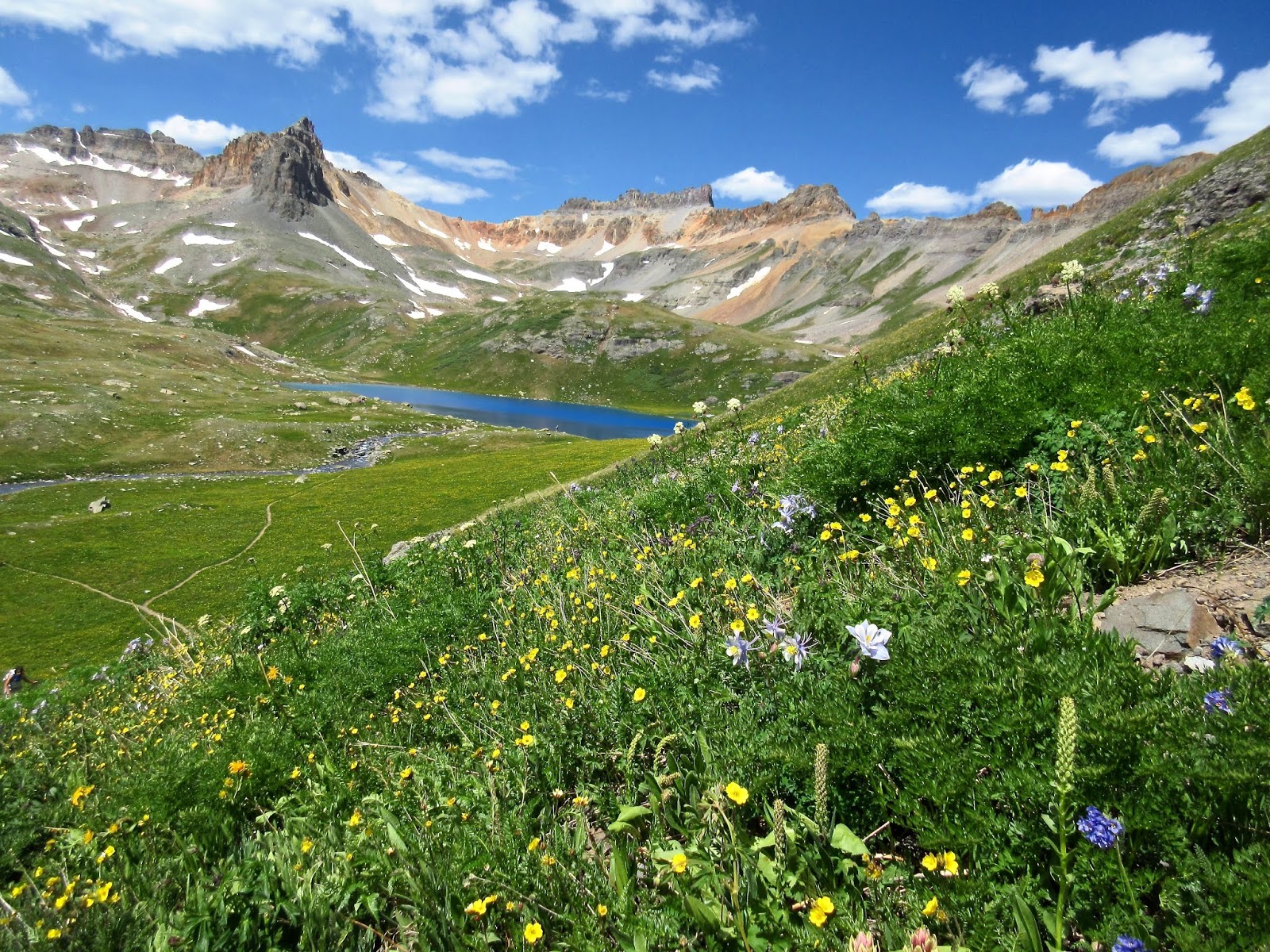 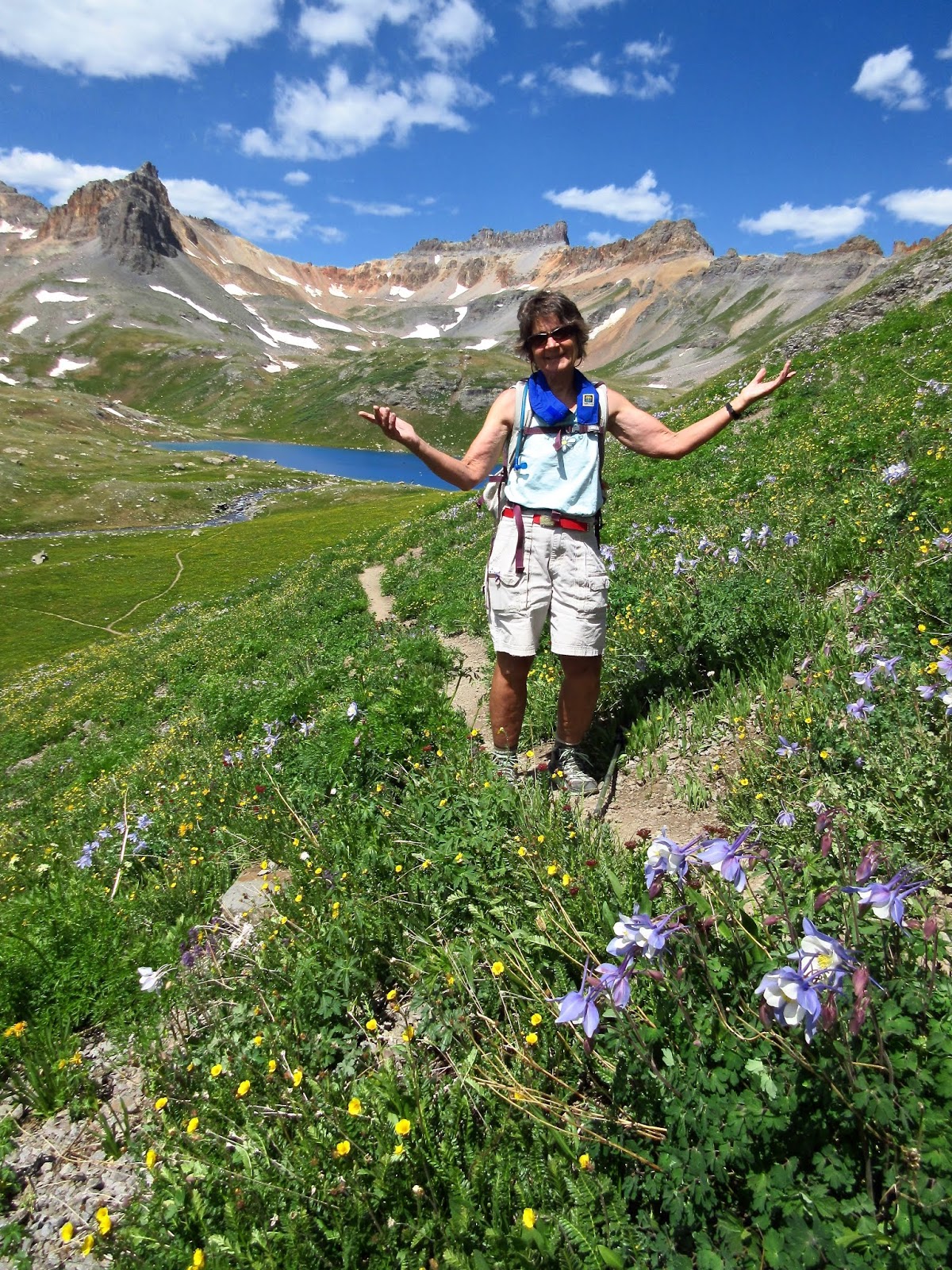 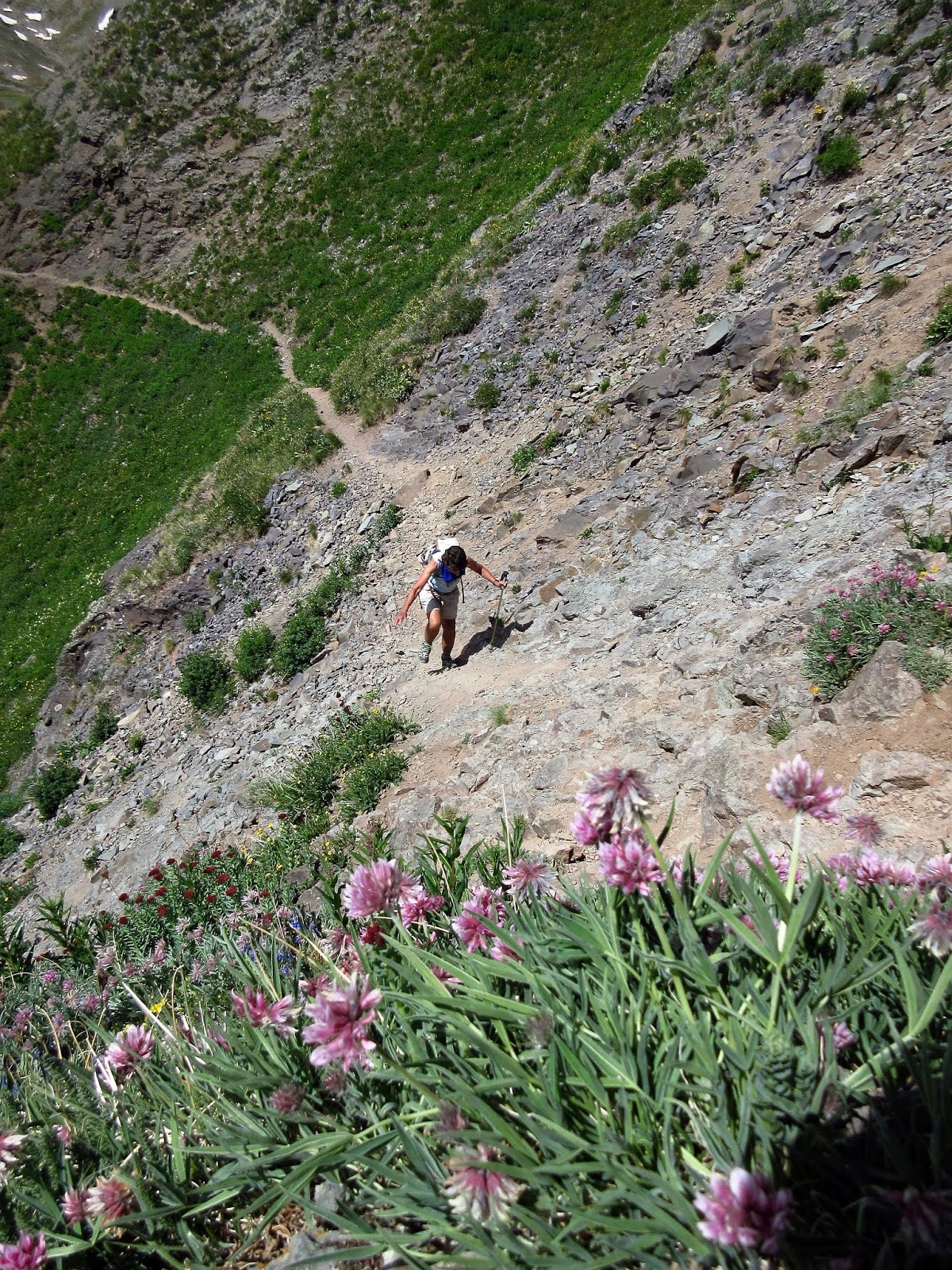 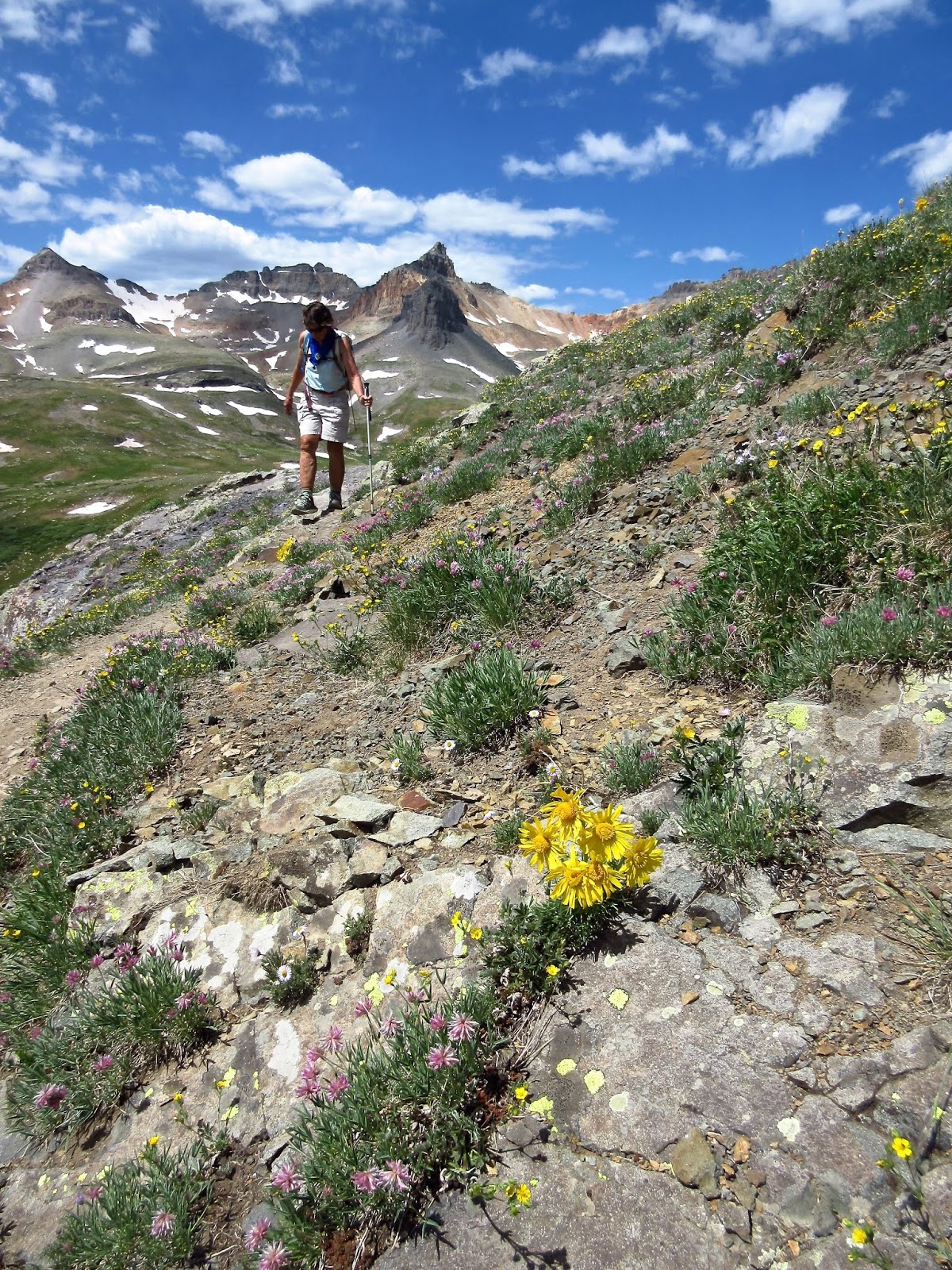 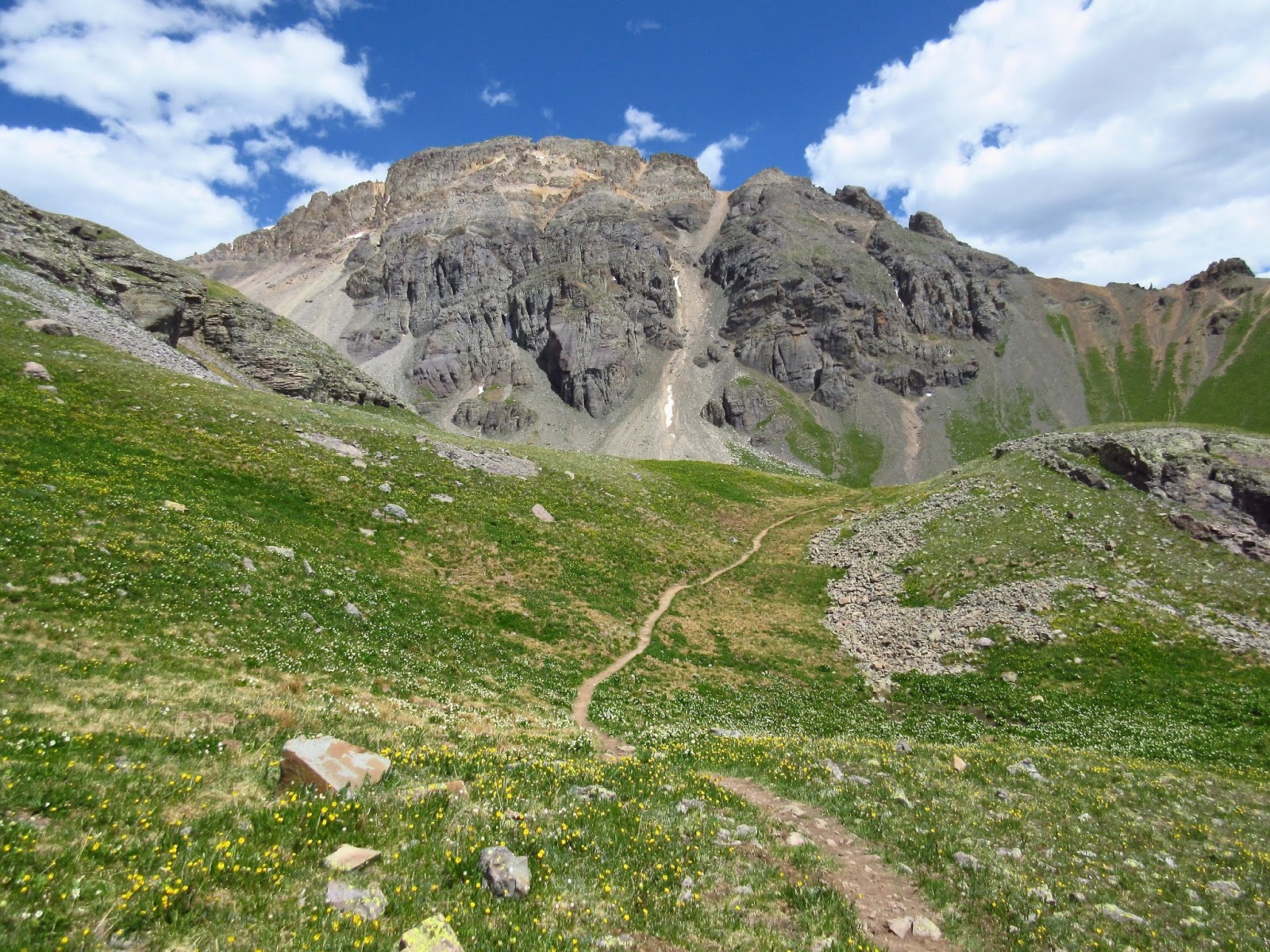 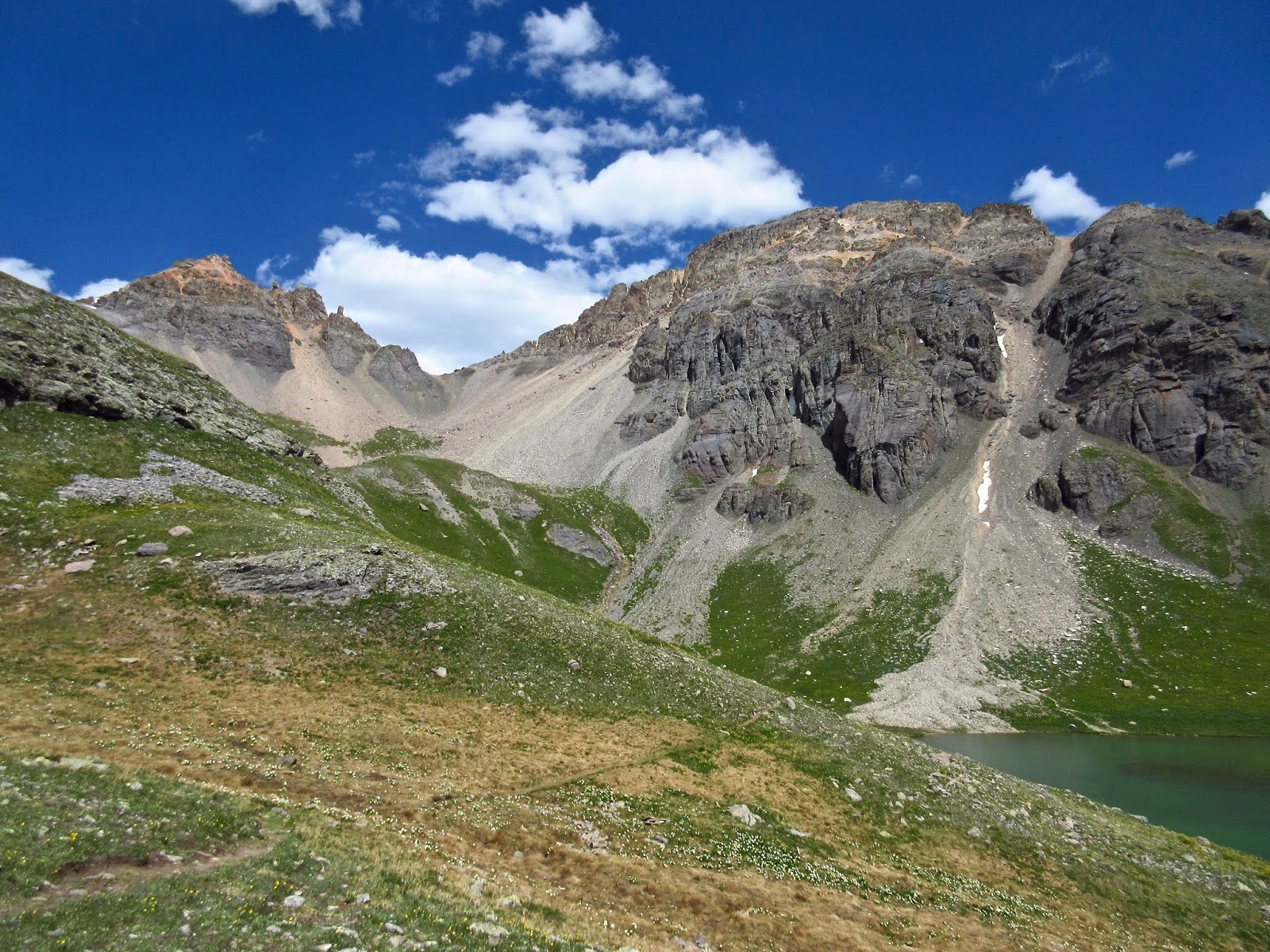 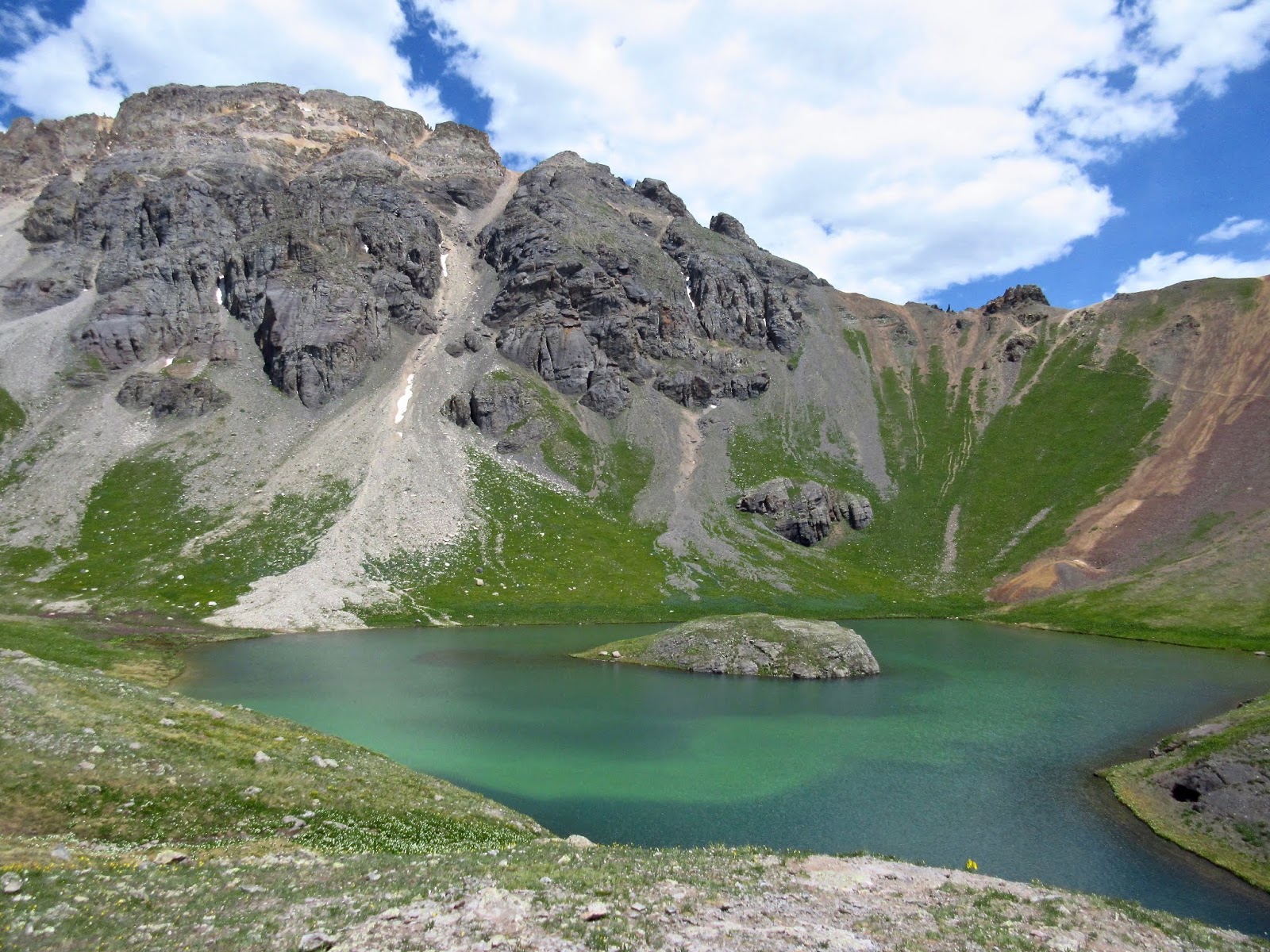 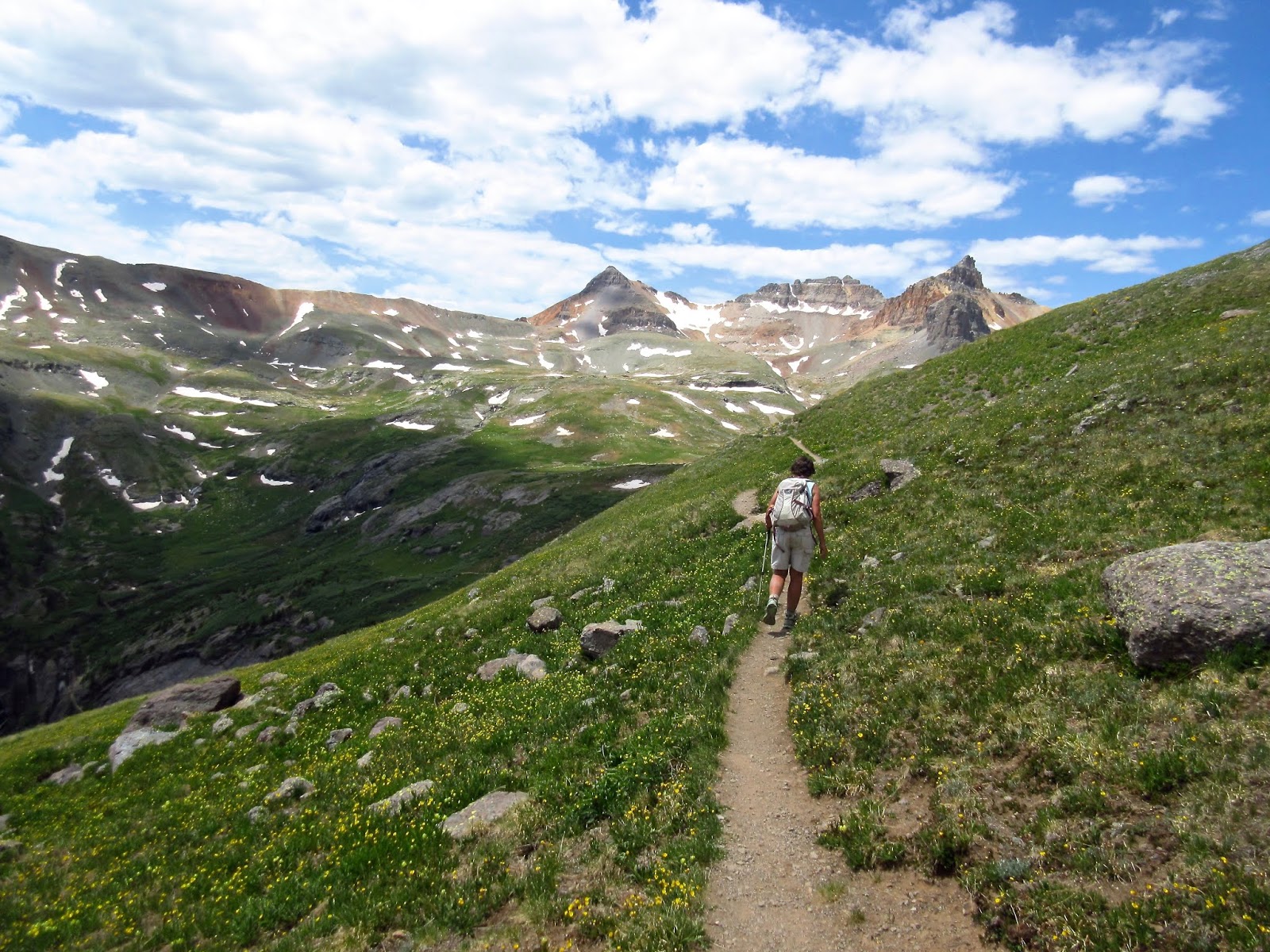 After lunch it's time to trade the Surreal for Real. We dawdled along, not wanting it to end. As clouds moved over Ice Lake the "light" would go out and steal its beauty. Just another dark blob of colorless water. It was fun to watch it go on and off...like some child playing with a light a switch. 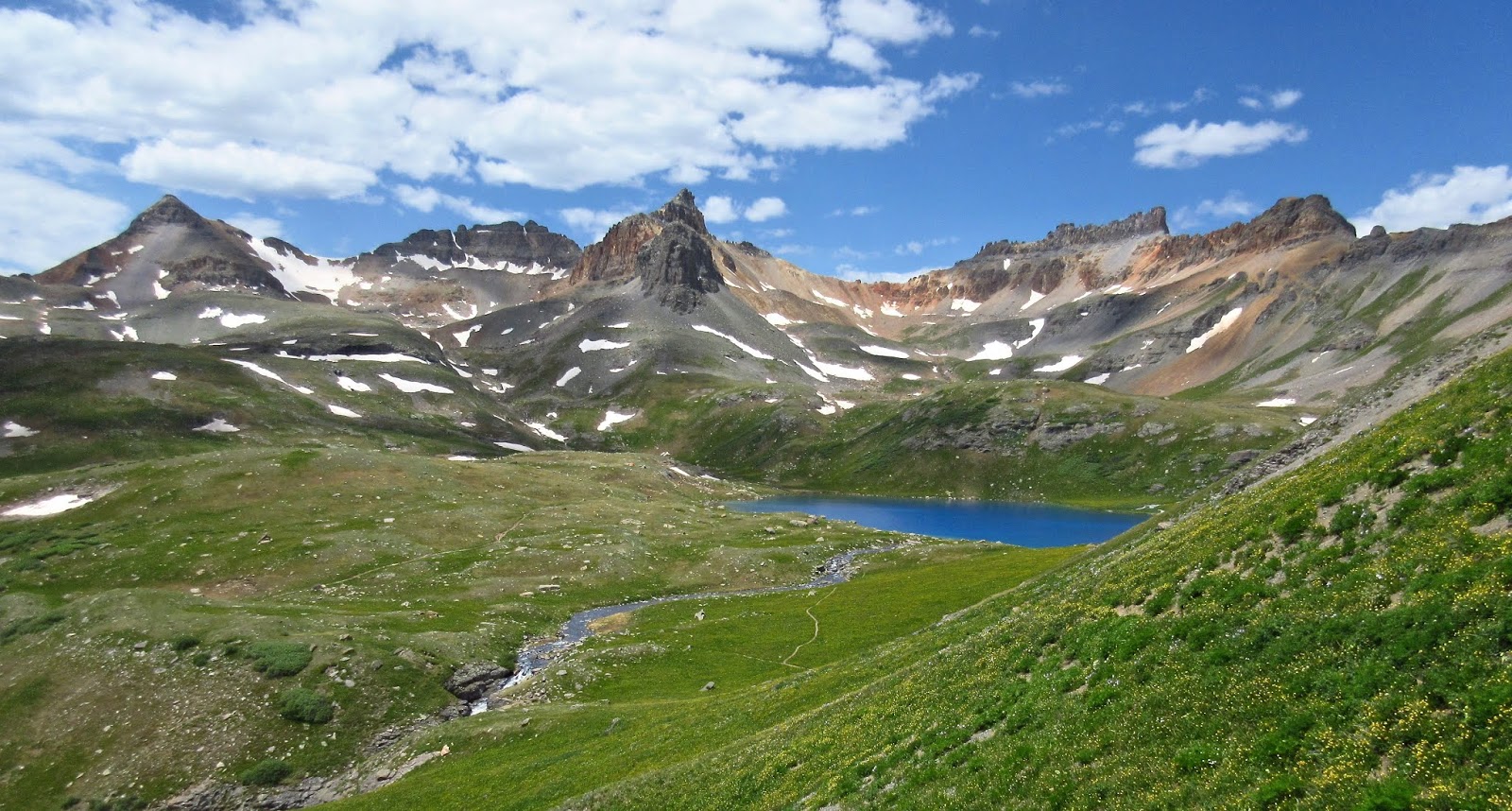 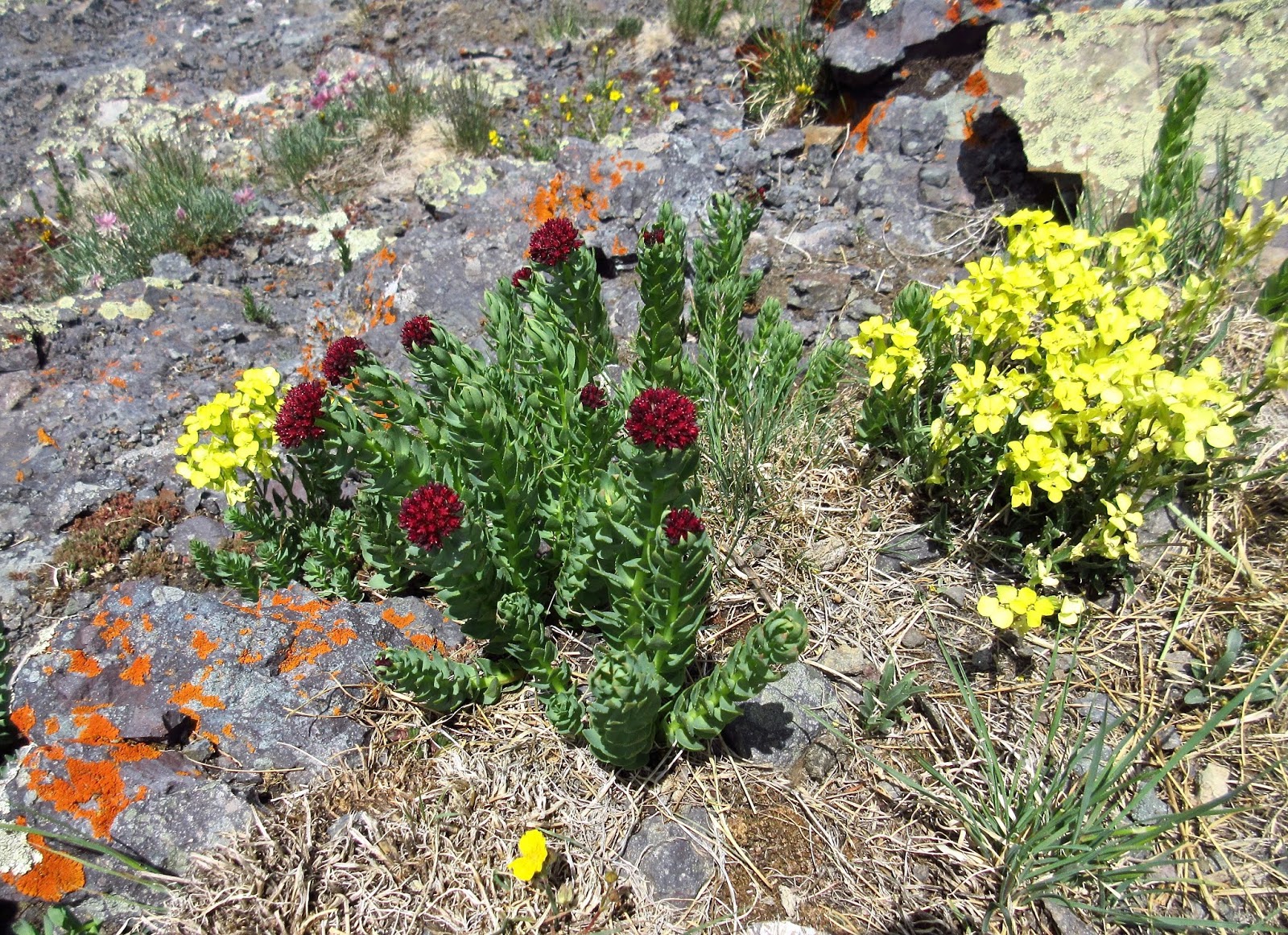 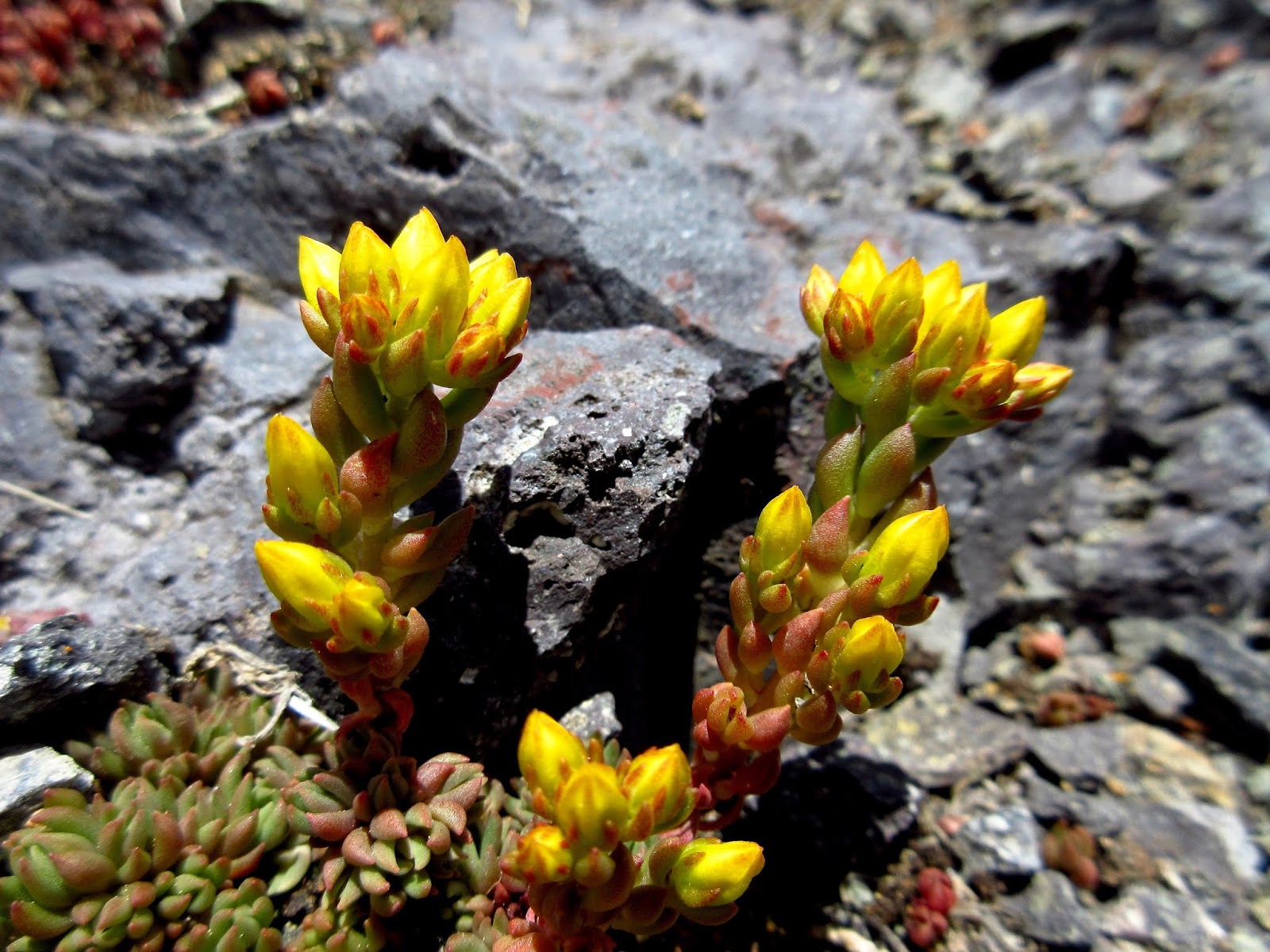 We could shortcut back to the main trail but decided to have one last look at Ice Lake...just to be sure it really was that blue. 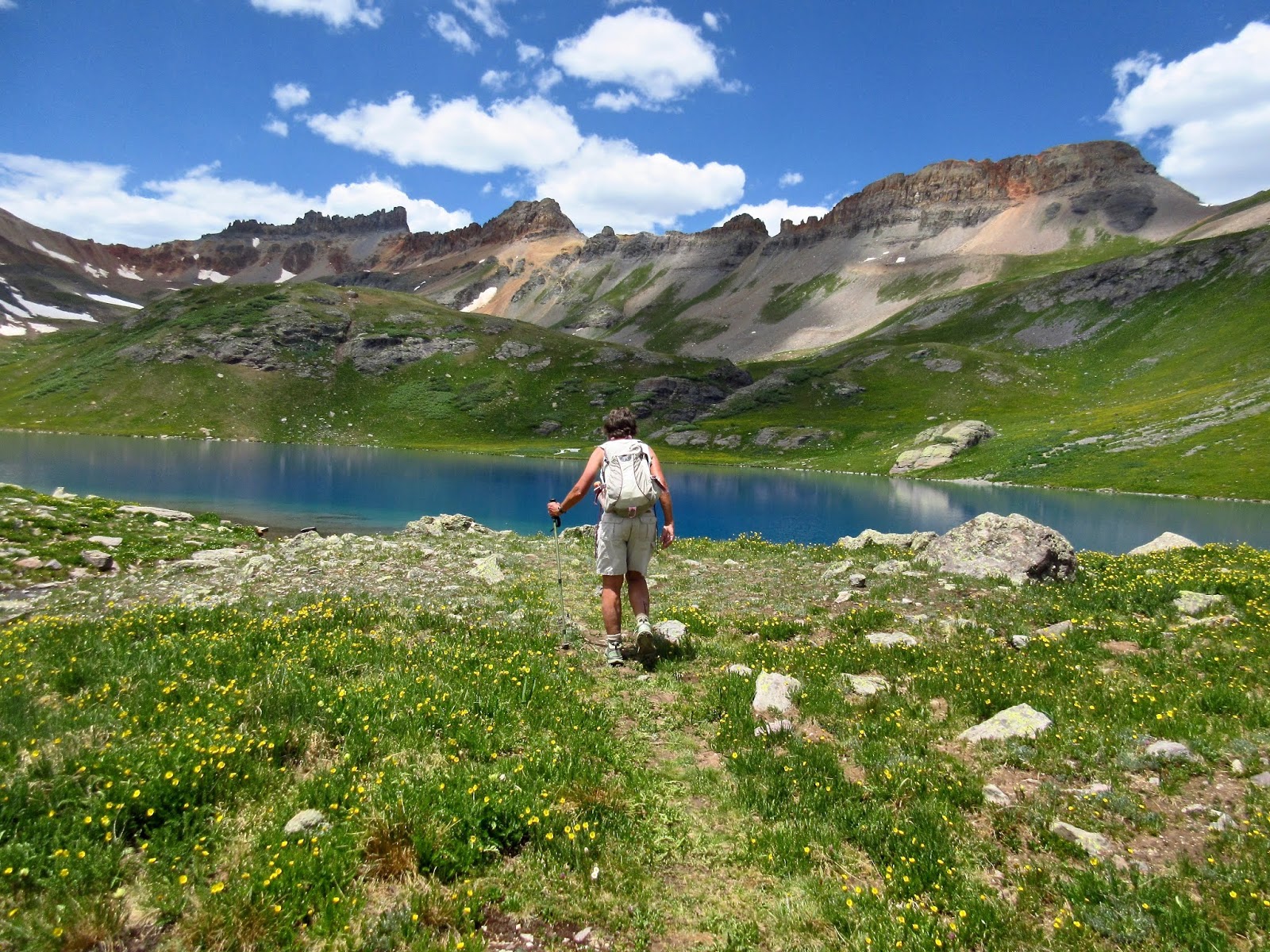 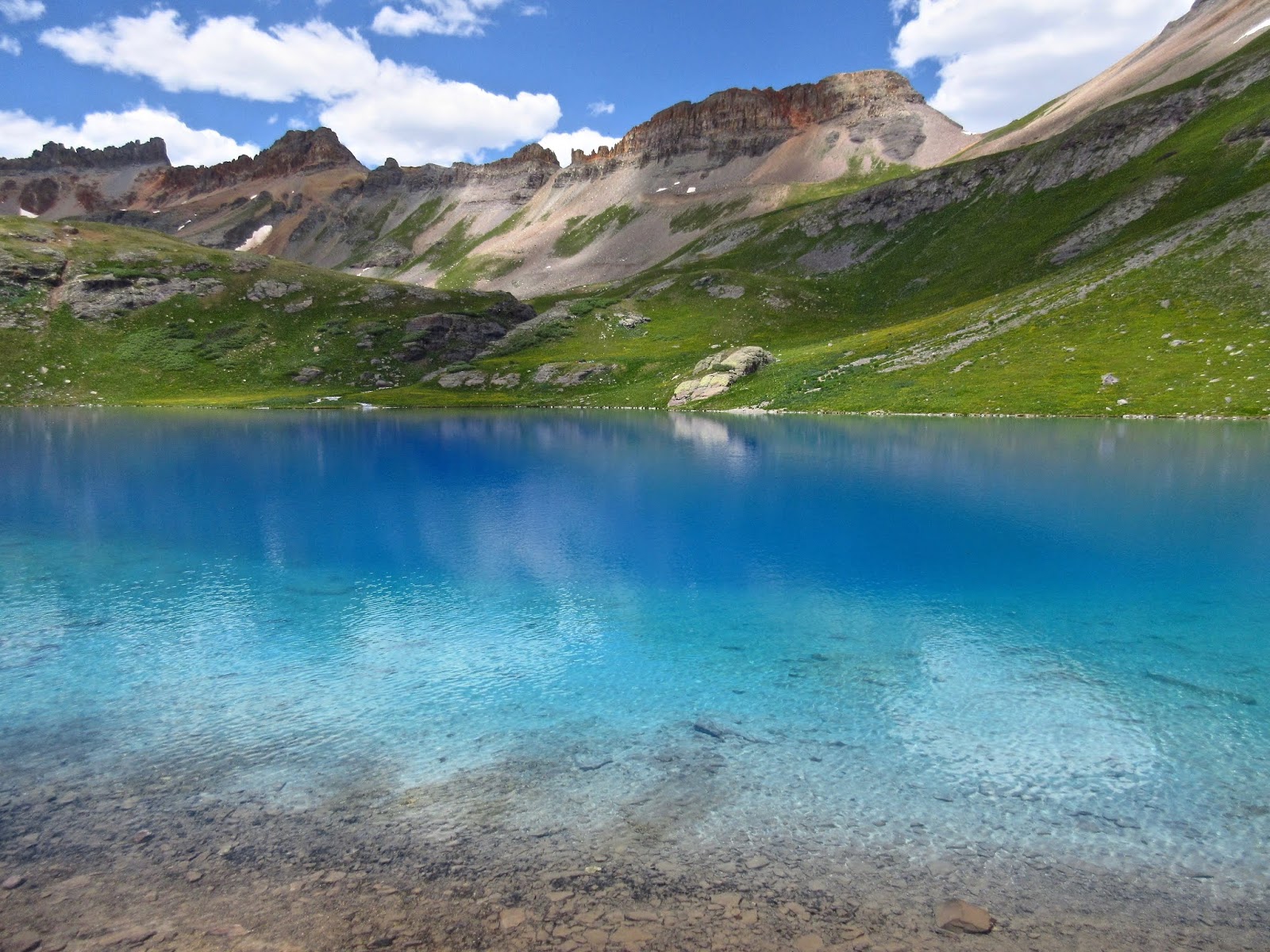 Yes. Yes it was. Definitely the bluest I've ever seen, right Bobbie?

A couple of Panoramas: scroll right →