Neither Rain nor Fog nor Darkness of Day nor Falling Rock... Headed up Black Bear 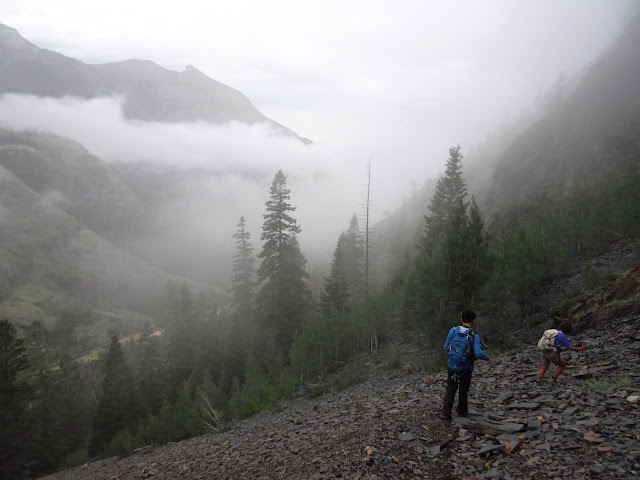 It's been raining so much around here that we've had a difficult time squeezing in hikes for Dehui. But he wanted one more morning hike on his departure day, something close and not to long. "Bear Creek," Bobbie and I said in unison.

The trailhead is only three miles south of town. What starts out as a boring forest hike that switchbacks up a steep slide of rocky scree, ends up being a pretty cool blasted-out path that inches its way through Bear Creek Canyon. Gold Fever must be a powerful addiction. Now if the weather gods would just work with us.

Needless to say, we got an early start. A mist of gloom had settled in on Lovely Ouray. Dreary low clouds oozed through town, funneled by boxed canyon walls dripping wet from steady overnight rains, some of which, evidently, came in buckets. Somehow I managed to sleep right through it.

On about the second or third switchback we found out just how hard it had rained. The trail had been gashed to the bone by a flash flood. Subsurface arteries of tree roots lay exposed; large boulders teetered; massive quantities of loose soil and rock were displaced on either side of a newly formed river-way. 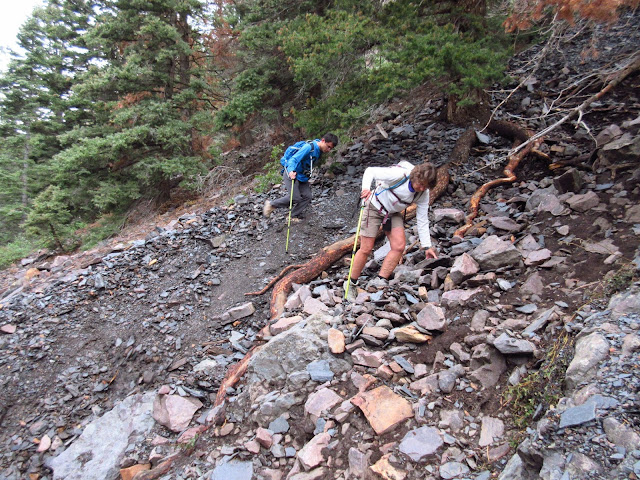 The ground had yet to settle, so it was hard to find purchase. With every step rocks gave way, rolling and tumbling according to Newton's First Law of physics.

Being familiar with the trail, I mentioned to Bobbie as she tiptoed across, "You realize we are going to be crossing this gorge several times, don't you? It cuts a straight line through all these switchbacks." After yesterday's "marathon," the expression on Dehui's face said he'd had enough adventure. He looked ready to head back to the safety of campus life and free Coors Light back in Golden, Colorado.

I lost count of how many times we had to break a new trail across the loose spoils of Mother Nature's new "shortcut." With each crossing we rained mesozoic missiles down the chute toward unsuspecting hikers below.
"Step lightly, mates." 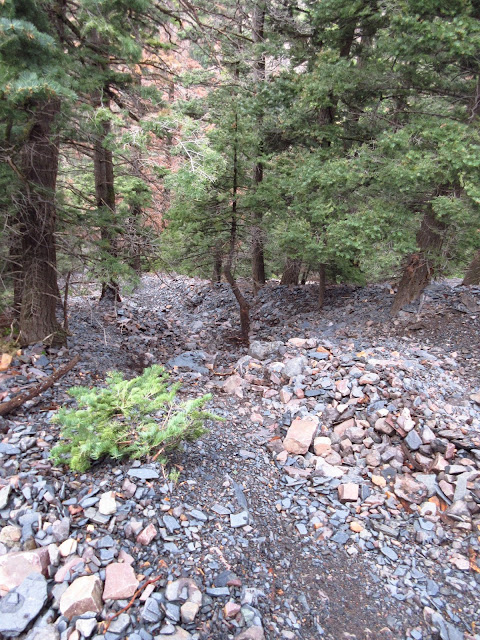 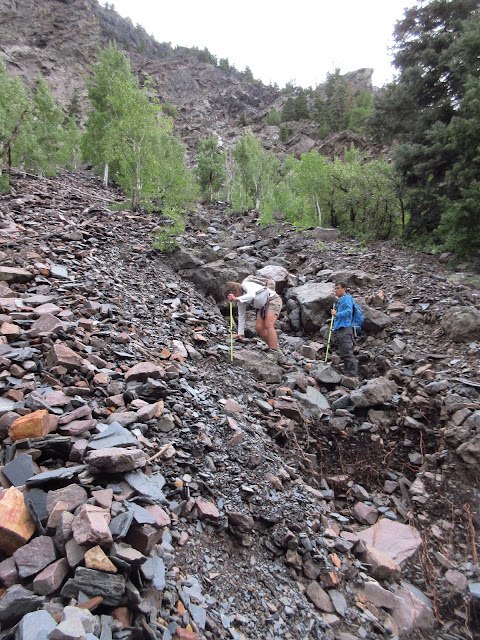 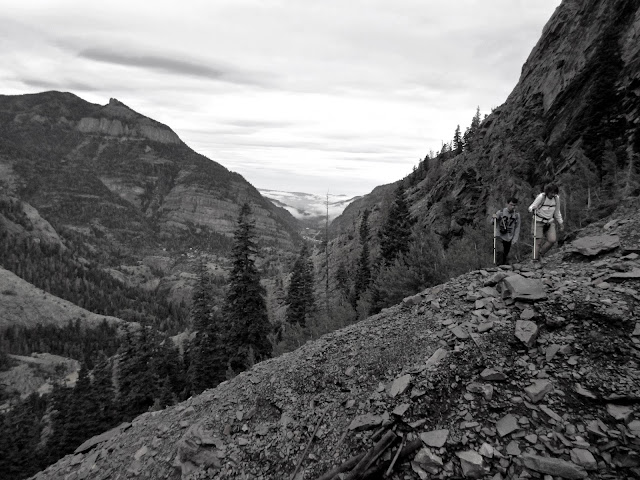 Mom was right, all bad things come to an end... eventually. We finally rose above leaden clouds and rocky detritus, and headed into the vertical walled canyon of Bear Creek. 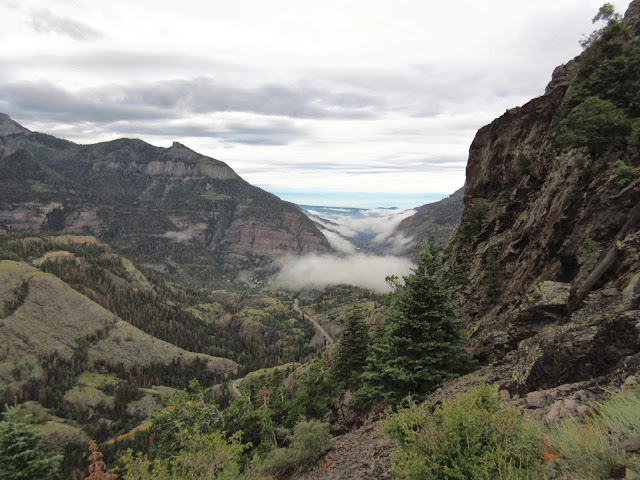 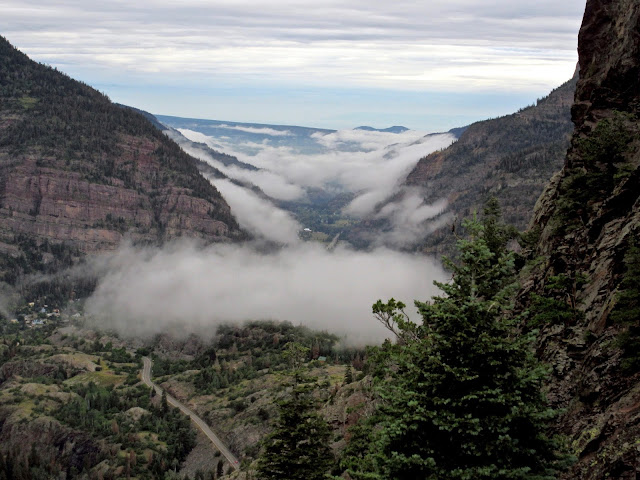 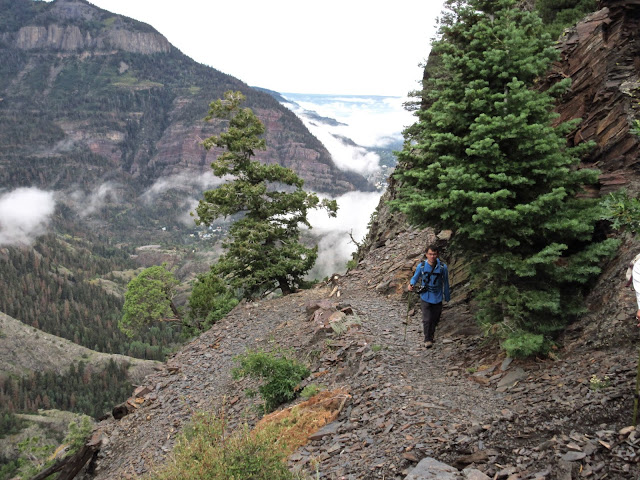 Out of the "fire" and into a "shooting gallery."

I told my hiking mates to keep and ear and eye out for rockfall as all the rain had loosed the mountain above us. We stepped over "evidence," a hiking pole in one hand while the other protected our skulls. We were a tad jumpy... ducking and freezing in our tracks with the roll of every pebble. I wondered if this might well be the "straw" that breaks the back of return visits for Dehui. 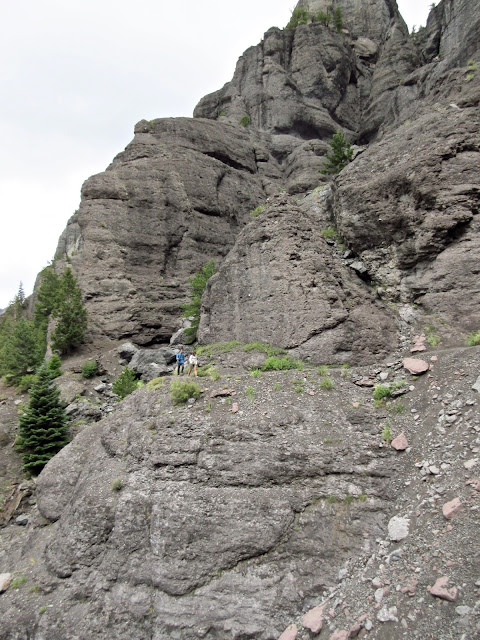 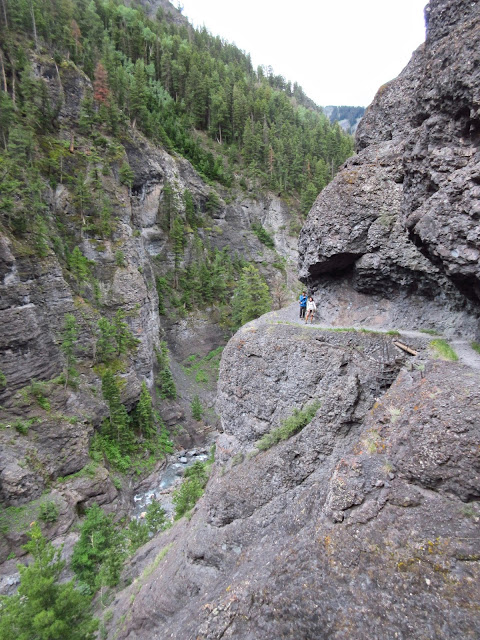 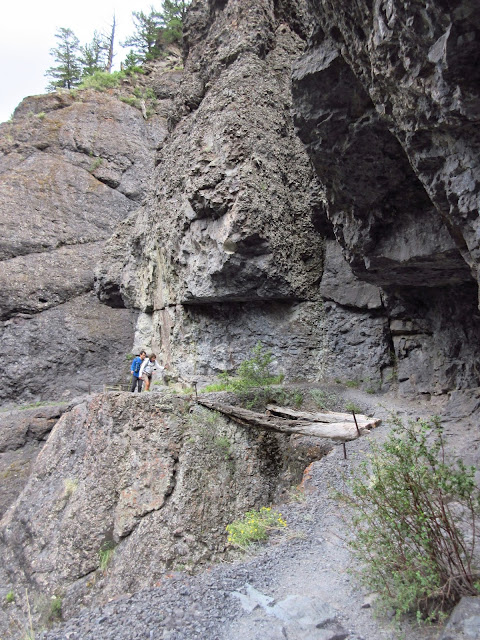 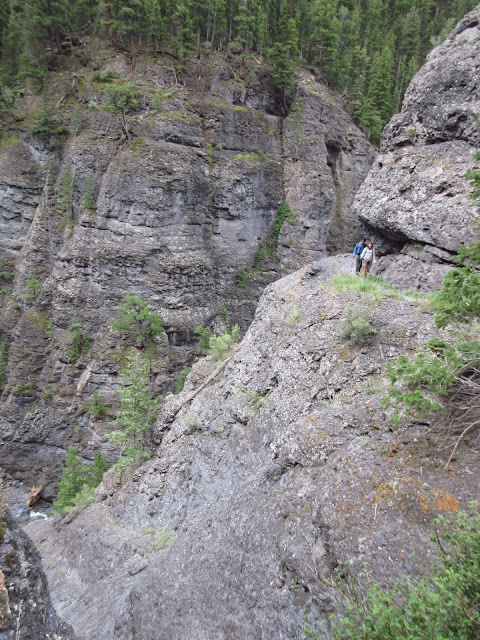 But the hike was as beautiful and intriguing as it was sketchy. The pall of moody clouds cast a certain mystique that brought out the "shutterbug" in all of us. 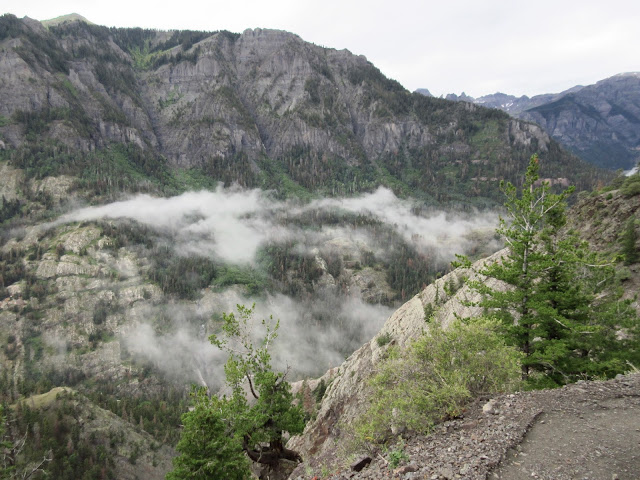 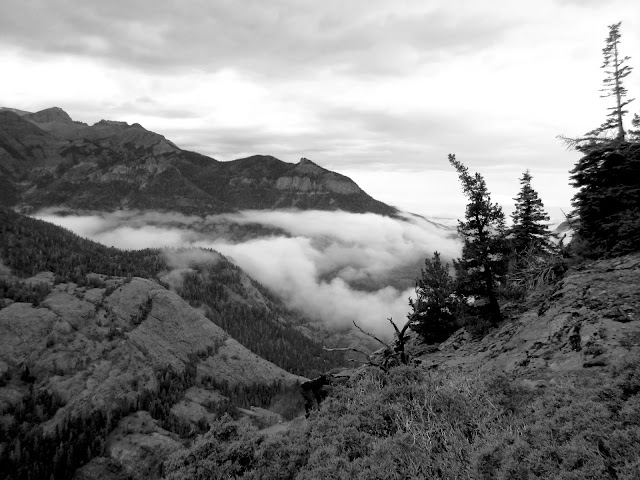 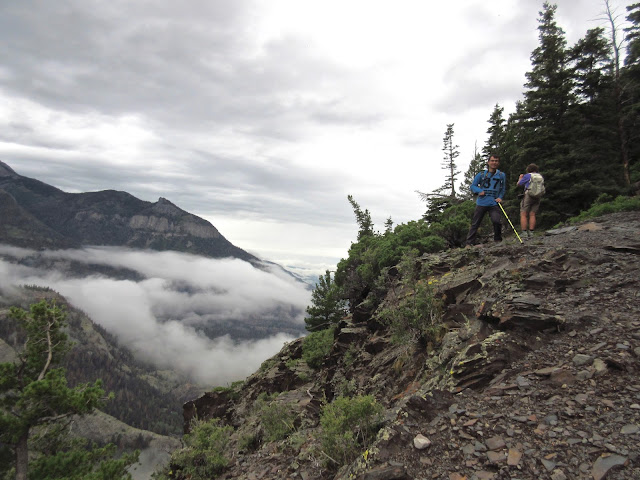 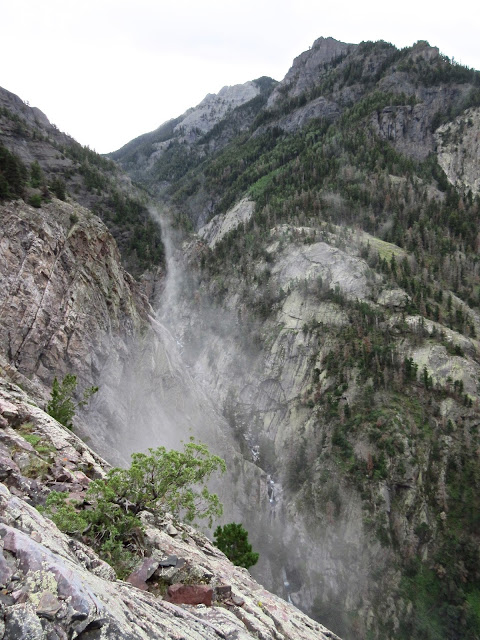 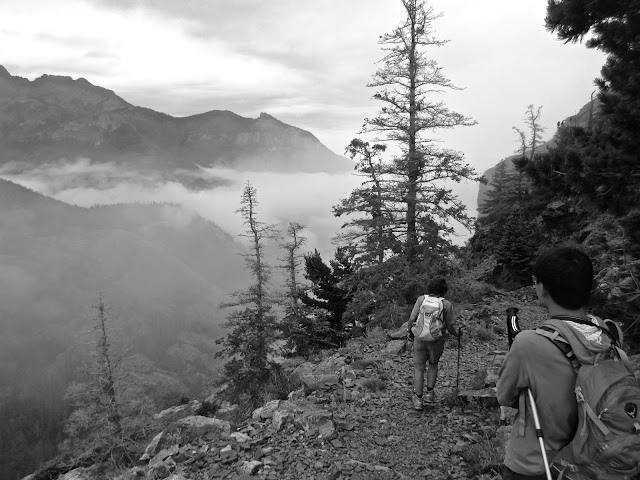 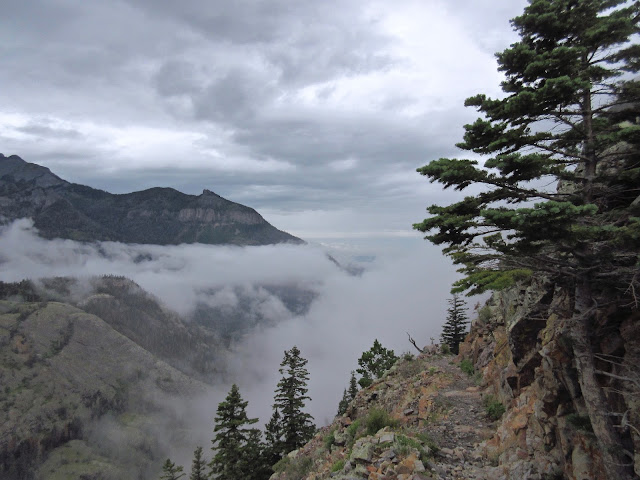 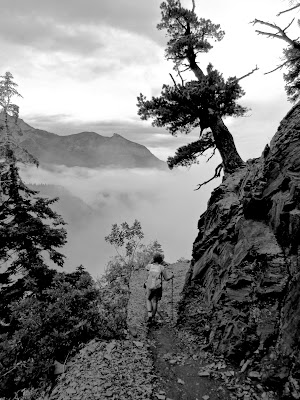 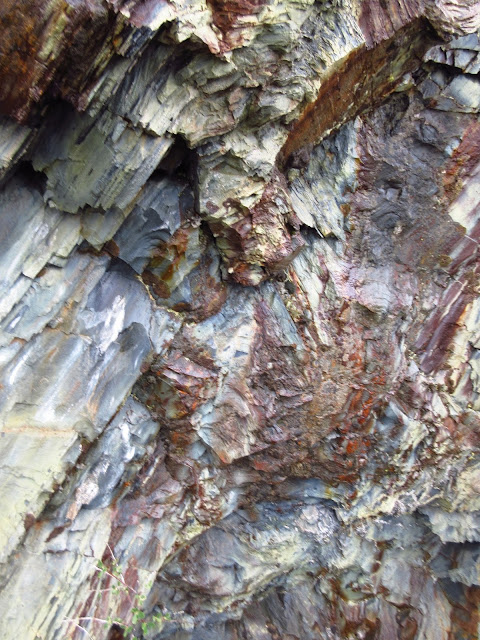 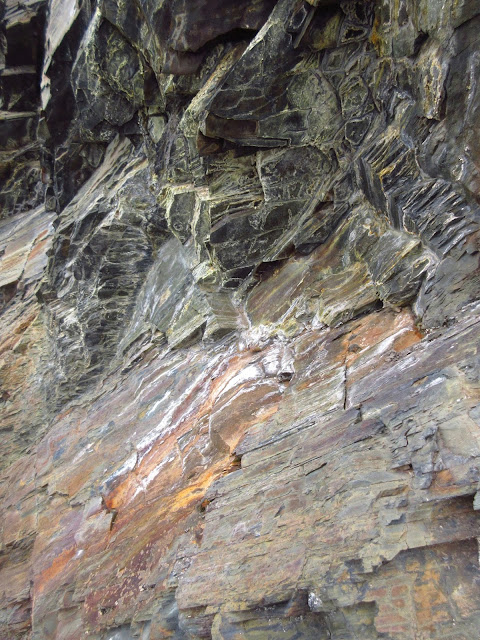 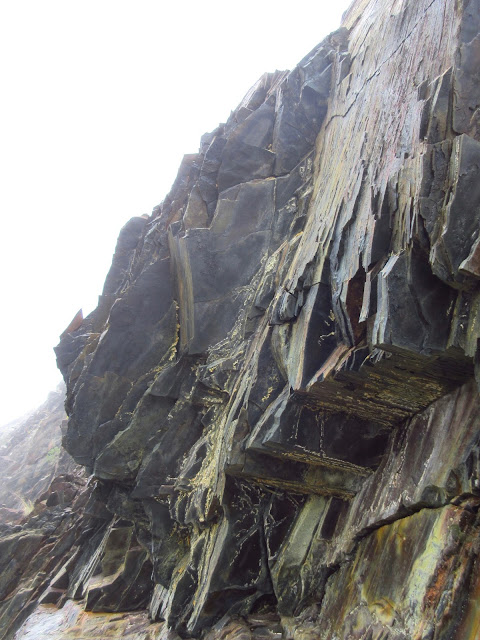 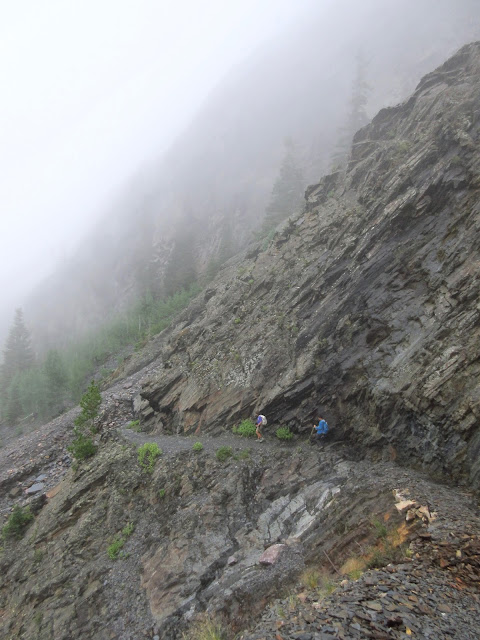 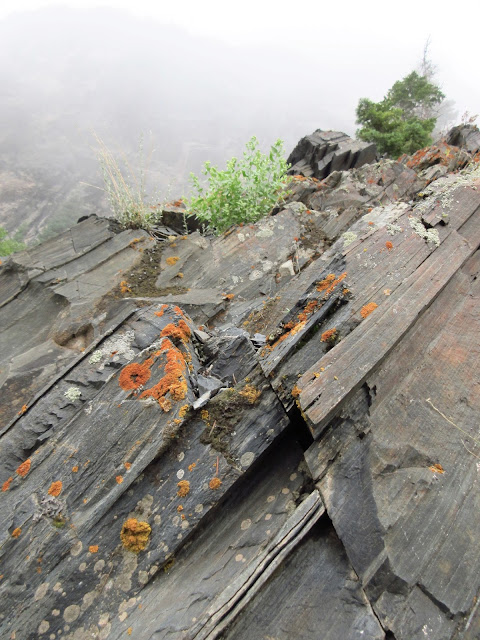 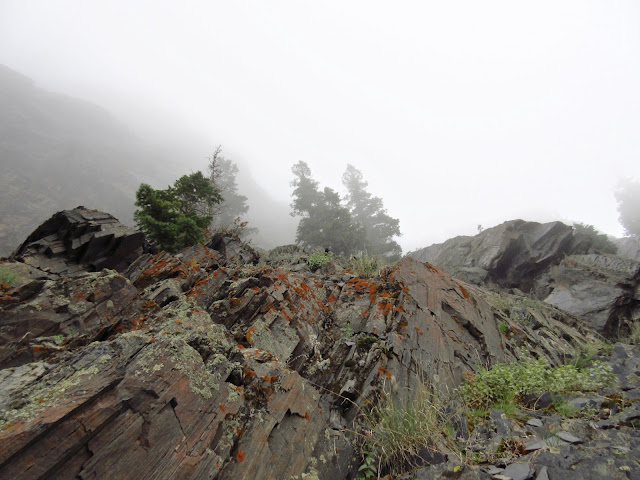 Posted by Box Canyon Blog.com at 7:44 AM