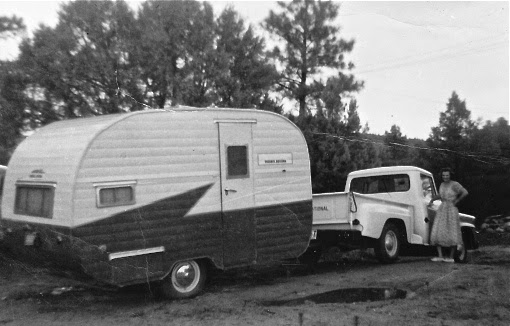 The lead photo represents some of the fondest memories I have of childhood. Mom and Dad led a wandering life not unlike Moses and the Israelites, always searching for "the promised land," a higher purpose and God's will.


In trying to understand who I am and why, I need look no further than Everett and Hilda Johnson. It's a parent's job to construct life-molds for their children, essential frameworks of morality, conscience and empathy. Thus, my childhood environment was heavily molded by "religion" and biblical precepts. Unfortunately I was genetically dispositioned to rebel and question...to break said "molds." Of course every good story requires an element of conflict...

Imagine a comfortable and settled family of five (with a nine month old baby) uprooting, selling out and bidding farewell to Ohio livelihoods, relatives and friends in order to begin anew in the deserts of Arizona. "Selling out" indeed; there was no "safety net." On faith, instinct and grit, Mom and Dad hunted Life like prey...sometimes conquering, sometimes devoured. Oh the heart is a lonely hunter.

What follows is a Mother's Day tribute to Hilda Johnson—wife of Everett and mother of three fine children—and some of the good that came as a result of her life on earth. Her story is complex, emotive and full of ups and downs—a mix of melancholy and joy, struggle and repose, a little sweat and blood and a sea of tears.


Mothers Pass, But Their Love and Lessons Are Eternal
By Mark Everett Johnson 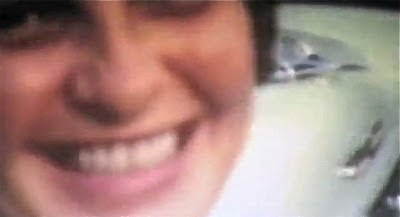 I’m staring at a priceless and befitting photograph for a Mother’s Day tribute. It was gleaned from reels and reams of eight millimeter home movies shot by my "Spielberg" dad, Everett. This noir freeze-frame holds Hilda Mable Johnson against the backdrop of a ’56 Chevy. Both were destined to become “classics.” Mom’s beautiful face and smile fills the lens of Dad’s heart as much or more than his prized hand-wound Bell and Howell.

It was1938 when Hilda Mable Carder accepted Everett Milo Johnson’s proposal under an Ohio moon. From their union came three children starting with my brother, Daniel, ten years my senior. A year later Sally Jo came along and evened the gender score. A near decade would tick by before I debuted...likely an "Oops," but not to hear Mom’s tell it. Over the years she vehemently denied that my late-comer birth was accidental, as if being “unintended” might somehow bruise my tender psyche.

That Mom was a tad eccentric is an understatement (imagine Edith Bunker, times ten). As a youngster Mom was sensitive and shy. She ended up dropping out of school in the eighth grade in order to avoid ridicule and teasing at her struggle to properly enunciate words... something she would struggled with her entire life. In compensation, perhaps, adult Hilda went overboard the other direction, growing ever more fond of the “spotlight.” By the time her “golden years” rolled around, Mom had crawled so far out of her shell it couldn’t be found, as if trying to make up for all those years of feeling inferior and socially disadvantaged. In her 80's, Mom’s "drama queen" antics got her kicked out of two retirement homes…unbelievable storylines ripped from scripts of  “Days Of Our Lives” (insert organ music here).

Aside from bailing Mom out of trouble and, eventually, moving her to new facilities, my cross to bear in her company was to listen to the “particulars” of my conception as she re-told it over and over to complete strangers. For confounding reasons I could never understand nor undo, that story became one of her favorite go-to subjects—at the park, in the supermarket...church! Lord, have mercy. Anywhere Mom could corner an audience, I suffered that story again and again. She would go into tsunami mode and couldn't be stopped. I learned to just smile and nod, endure the embarrassment, and let her command the “spotlight” she loved.

In retrospect, I suppose Mom was being a mom, trying to protect her "baby" by reassuring me (and the public at large) that I was not an accident, that, by God she wanted another child so bad she willfully “tricked” my reluctant Daddy into giving her one. The fact that I was well into my 50’s—that I couldn't care less whether I was accidental or on purpose—mattered not in the least to her. Early on, before I learned to smile and nod, it could be mortifying. I developed a sixth sense for diverting potential "opportunities," especially in supermarkets.
“Mom! Did you hear that? Hurry, there’s a sale on ice cream over on aisle three!”
I learned to replace potential restaurant "audiences" with "Take-out."
It’s oddly both funny and sad now and brings a chuckle and a tear.


One day, out of the "blue," our family received devastating news. Sally Jo was dead at the tender young age of 22. Her death snuffed the light from Mom’s once piercing blue eyes. She grieved that loss for the entirety of her remaining life. You never get over the loss of a child, you just get by as best you can with the help of God and friends.

In her darkest hours Mom continued to reach out and help others. For all of us, the loss of Sally Jo left a nasty wound, the kind that scabs over but never really heals. 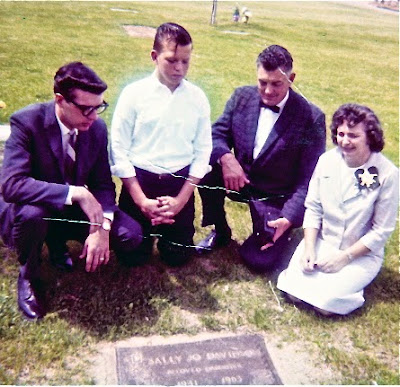 On a grey, chilly January morning in the Village of Oak Creek, Arizona, amongst a magical surround of towering red rocks and twisted cedars, Mom slipped from this life into the loving arms of her Heavenly Father at the age of 84. My brother Dan, Bobbie and I stood bedside as her rhythmic shallow breathing began to falter. We gathered close as Mom inhaled deeply, her chest visibly rising. She slowly exhaled, never to draw another breath.

I'll never forget that moment as my brother, Dan, leaned down and gently whispered in her ear:  Mom, you’re going to heaven now. We love you.

With those precious words she passed from this life. We gathered in a circle at the foot of her bed, held each other close and wept.

What a “classic” Hilda Mable Johnson… unforgettable, just as you wanted to be. This little Mother's Day "spotlight" is in honor of you and all the things you did for your family.  We love and miss you.

Here is a link to a one minute 8mm movie memorial to Hilda Mable Johnson, shot by my dad.


Love you Mom,
mark and bobbie