Taking A Step Back: Parting Shots and Thoughts On Joshua 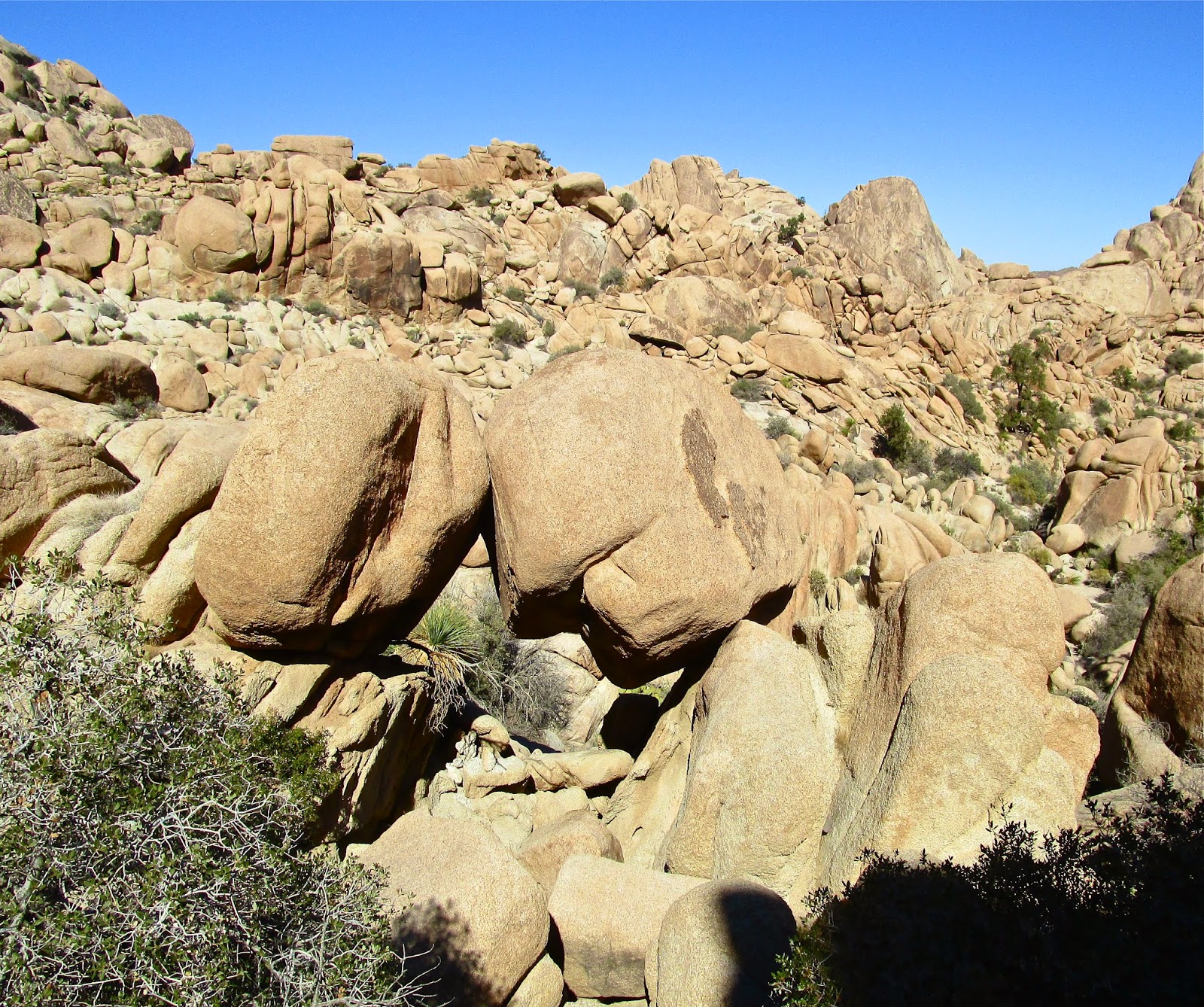 I will leave you with my January column submittal to the Ouray County Plaindearler, an article that sums up my impressions of time spent in Joshua National Park...

Sometimes it helps to take a step back when trying to make sense out of chaos. It gives us a bigger picture.

On The Road—Joshua Tree National Park, California: Bobbie and I took a break from peripatetic explorations in the southwest over the holidays. It’s always nice to come home to Lovely Ouray and spread out after a couple of months of boondock camping in “Goldie,” our vintage 26-foot motor home. She’s about the size of a modest walk-in closet with an interior that epitomizes my trailer-trash roots, when dark wood paneling was all the rage. Add tacky neon-teal for seat cushions, curtains, and shag carpeting, now spotted with twenty some odd years of food, beverage, and Utah’s red dirt, and, well, you get the picture.  Reminds me of my college dorm room, cramped, dark, and filthy. But we didn’t buy Goldie to live in; she’s just a place to eat, sleep, and come in out of the weather. At 9,400 bucks, I figure saved a hundred grand, and that buys a lot of gasoline… especially nowadays. I digress; back to “Joshua.”

Spectacular climbing, hiking, and photo ops aside, if you love wandering in a surreal landscape, I highly recommend Joshua Tree National Park. Located at the juncture of the Colorado and Mohave Deserts, it’s about 70 miles into California from Arizona. The park takes its name from its preeminent plant, a bizarre, multi-limbed species of yucca who’s upward reaching “arms” reminded some Mormon pioneer of the biblical character, Joshua (the Israelite who succeeded Moses and led his people to the “Promised Land”). The unfortunate name stuck.

By day, Joshua’s giant yuccas resemble gangly, disjointed, multi-armed trees with spike-fingered hands. But by night, they are misshapen mutant monsters out of some Chernobyl based horror flick. Reaching up to forty feet in height, most children (and a few city-slicker men) would rather pee in empty Gatorade bottles than face down the frightful Trees lurking in the darkness outside the tent.

At first sight, Joshua trees appear top-heavy—as if they could be toppled by a gust. Yet they survive in an area of the Mohave Desert notorious for being one of the windiest places on earth. I can attest to the wind’s ferocity having experienced it as a child. Our family was headed off to Disneyland from Phoenix when, just beyond Indio, we were stalled by a zero visibility sandstorm. The road disappeared under drifting dunes that overcame the car’s air filter and choked the engine dead. We ended up having the glazed windshield replaced, and the glossy finish on the windward side of Dad’s prized Oldsmobile was thereafter dulled as a bleached desert bone.

Having explored many of Joshua’s considerable nooks and crannies, I believe it is woefully under-named. I’m sorry, but “Joshua Tree” falls short, it fails to convey the principle seductress—those magnificent granite boulder mountains. “Jumbo Rocks.” The visual mélange of Joshua’s boulder-strewn landscape suggests a powerful explosive eruption. Mountains are crisscrossed with networks of fractures. Angular Granite slabs abut in disarrayed layers, shuffled stacks of giant tombstones that lean at every possible degree of repose. In contrast, house-sized spheres are held in suspension in V-notch weirs, and balance in defiance against gravity on sloping platforms.

Joshua abounds with segmented pillars, balanced rocks, and anthropomorphic effigies that are both mesmerizing and corny—a dizzying array of marbles and blocks, caught in the immeasurably gradual act of reduction. Joshua is splendid because it is absurd—an Andy Warhol-like pop-art museum of Nature’s most freakish handiwork, a mind-blowing blend of Legos on acid, or an accidental Stonehenge.

Joshua’s bizarre rock-scape was created when a subsurface sea of molten granite began to cool and fracture. Over eons of time, groundwater filtered through the joints and fissures, softening edges and leaving an incongruence of blocks and spheres. We have violent flashfloods to thank for uncovering these unique mountains, and weather and gravity for tweaking them to freakish perfection over time.

So yes, the name “Joshua Tree” fails to communicate its quirky milieu of post-apocalyptic earthquake chaos and scores of labyrinths so inviting. The first time Bobbie and I visited the park we were seduced into exploring its labyrinths off-trail and without a GPS. As darkness approached we turned around to come out, only to find that every branched canyon looked the same… so many options we couldn’t possibly retrace our route. It was like a house of mirrors, where one can get irretrievably lost within a few steps. Problem was, we were miles in. What was supposed to be a day-hike nearly became an ill-equipped overnighter.

Among the unfettered random chaos of Joshua’s disintegration one can’t help but question human relevance. We are but grains of sand on a vast beach, and landscapes like Joshua are there to remind us of that. When measured by the yardstick of time it took to create Joshua's mountains, and the eternity it will take to erode them into the sea, we our are nothing. 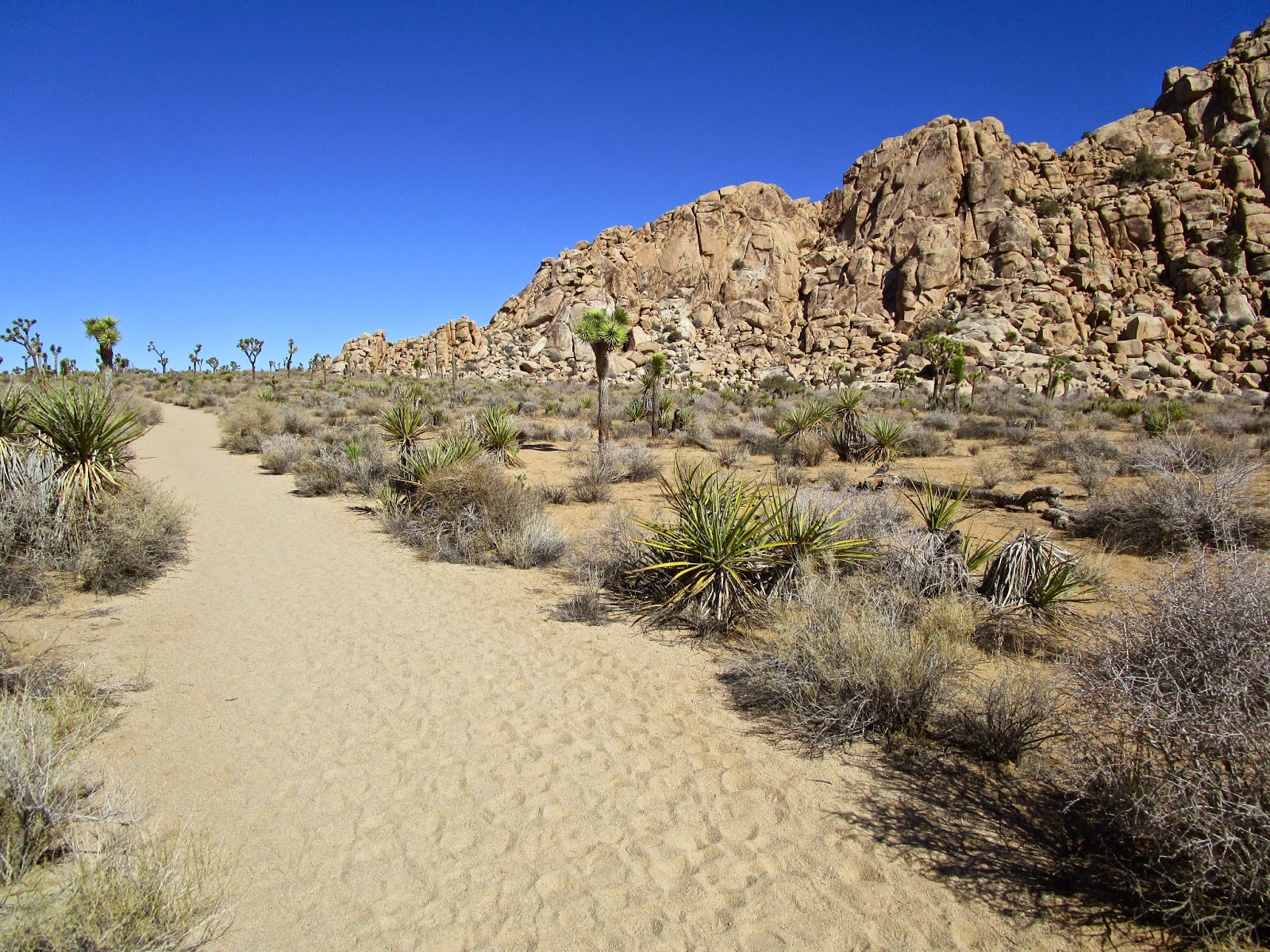 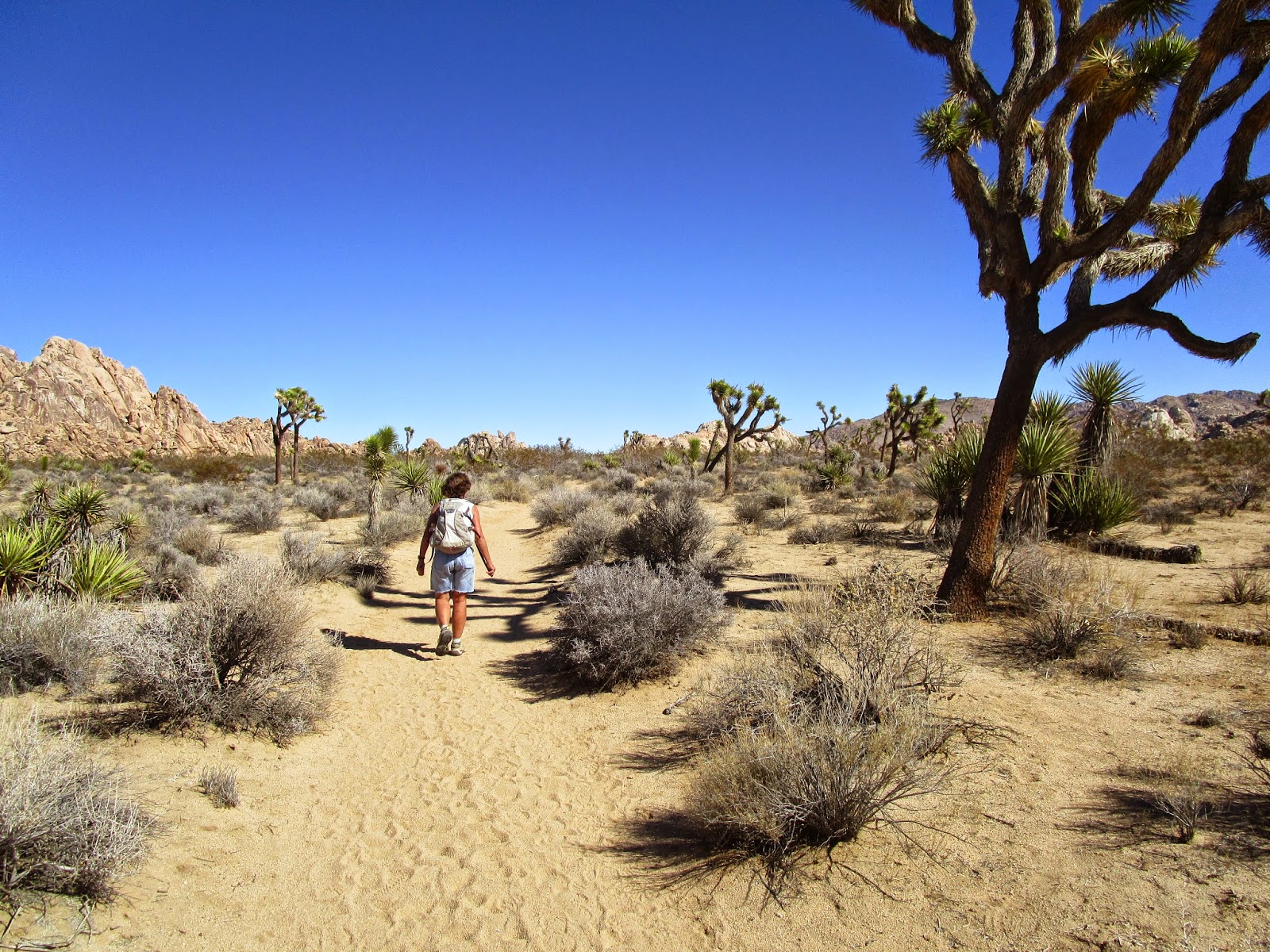 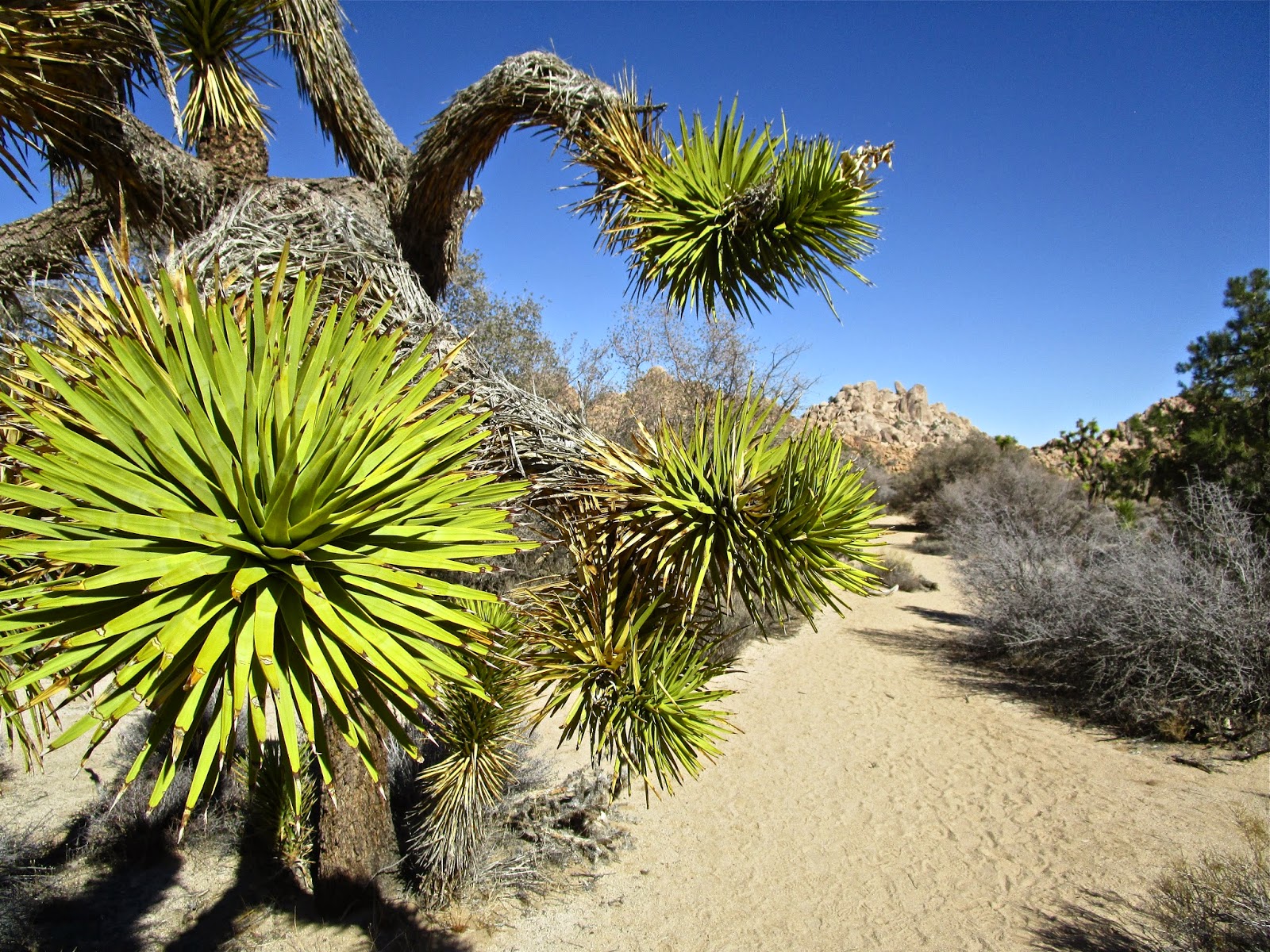 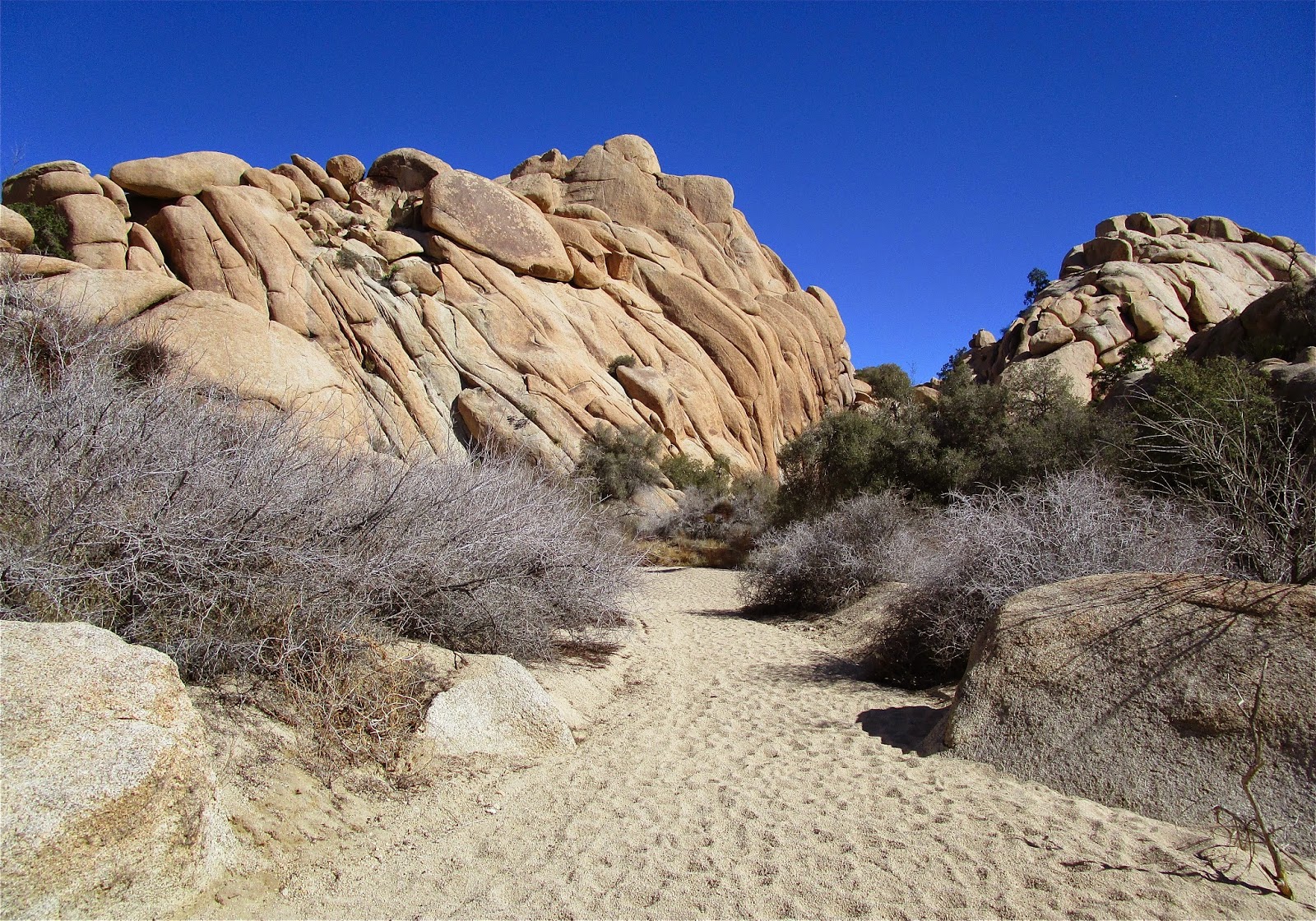 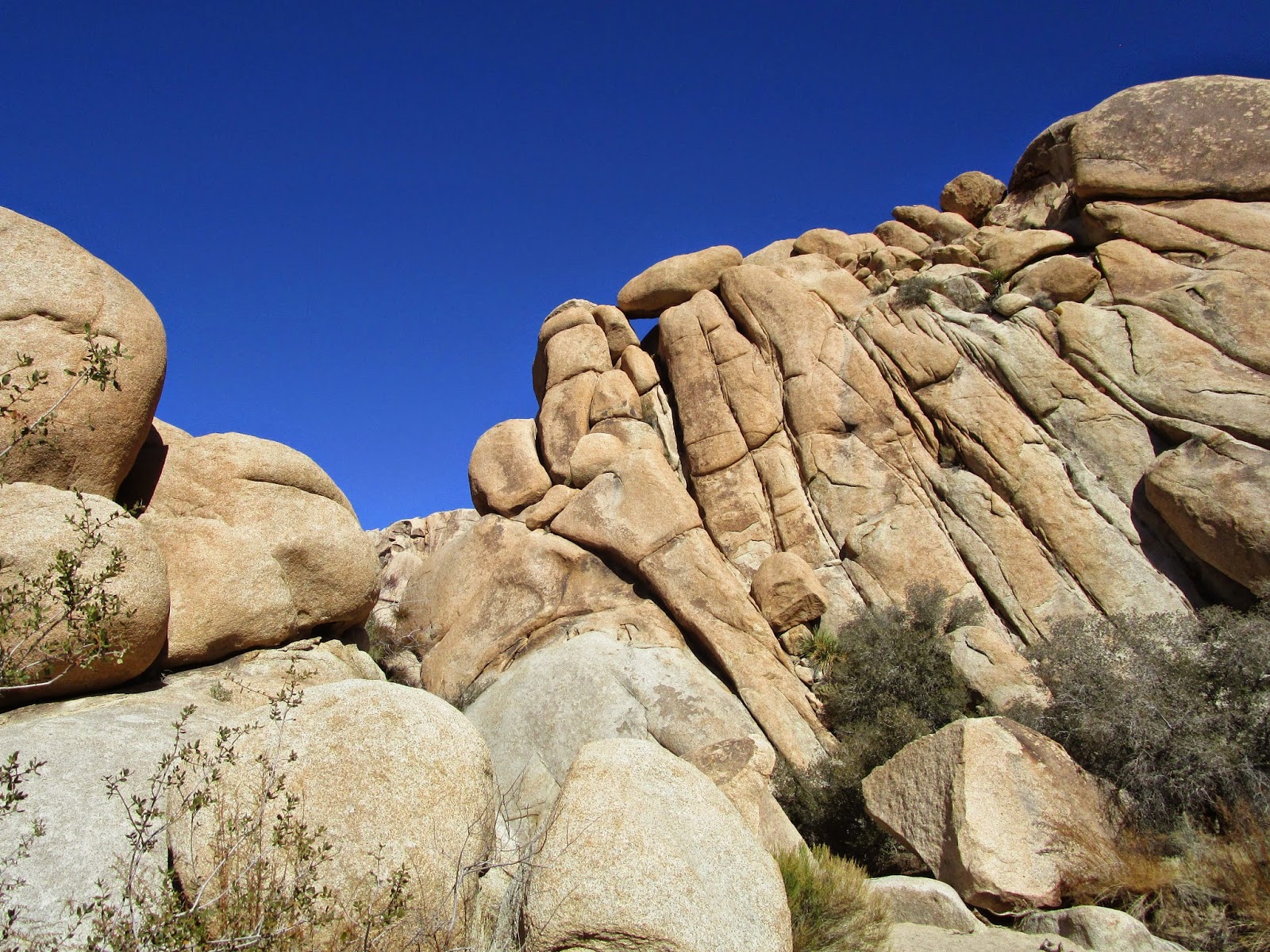 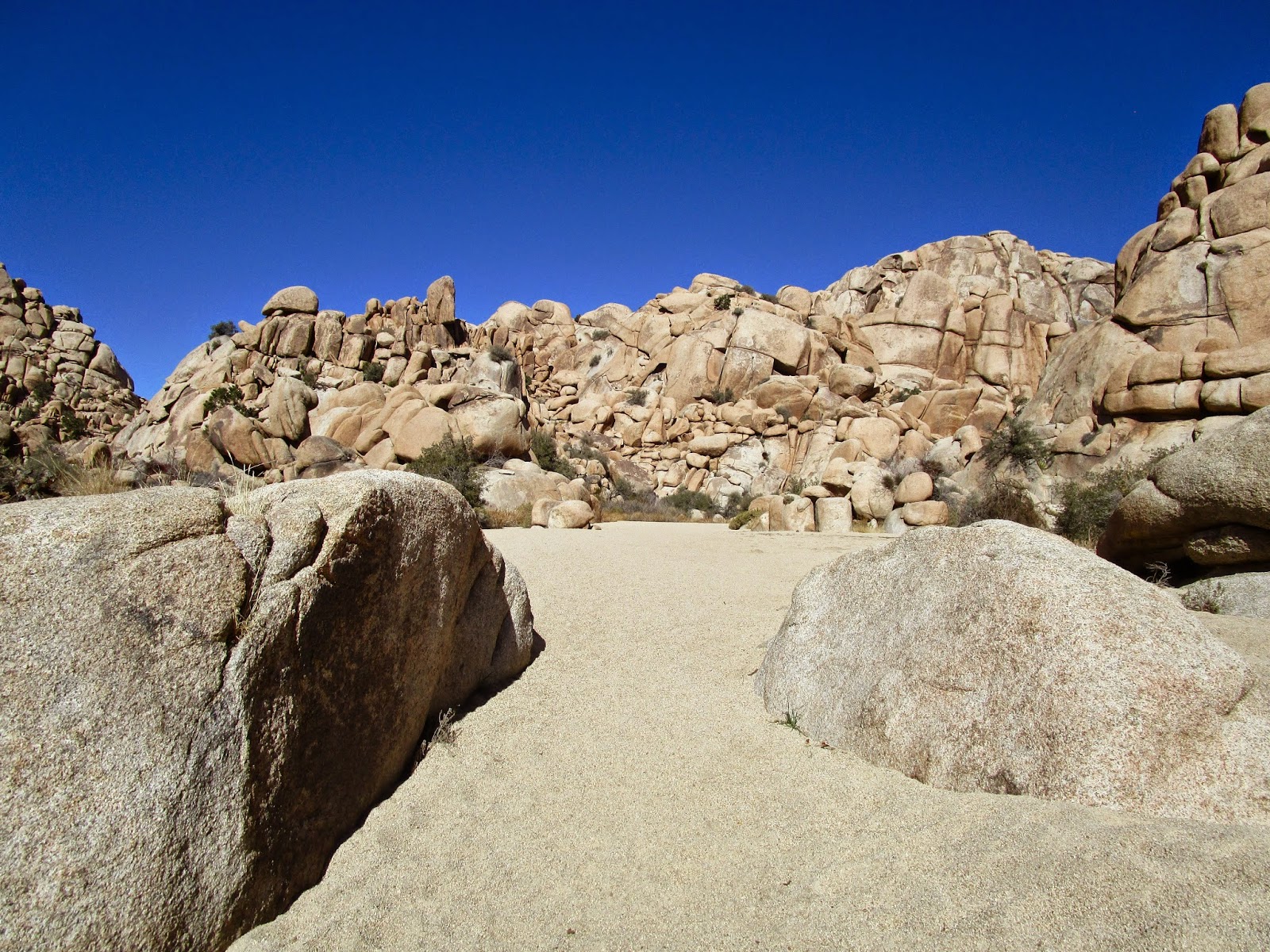 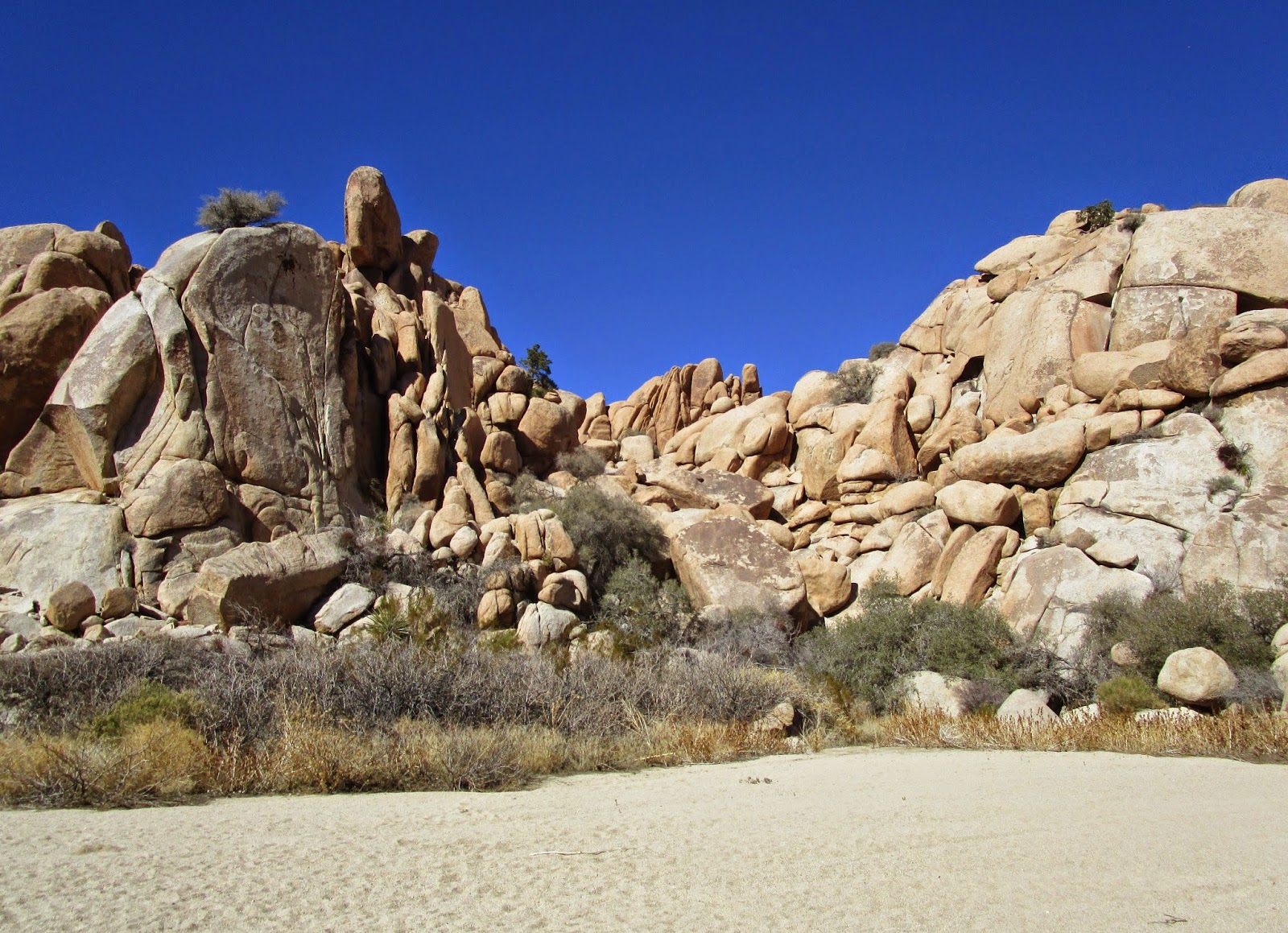 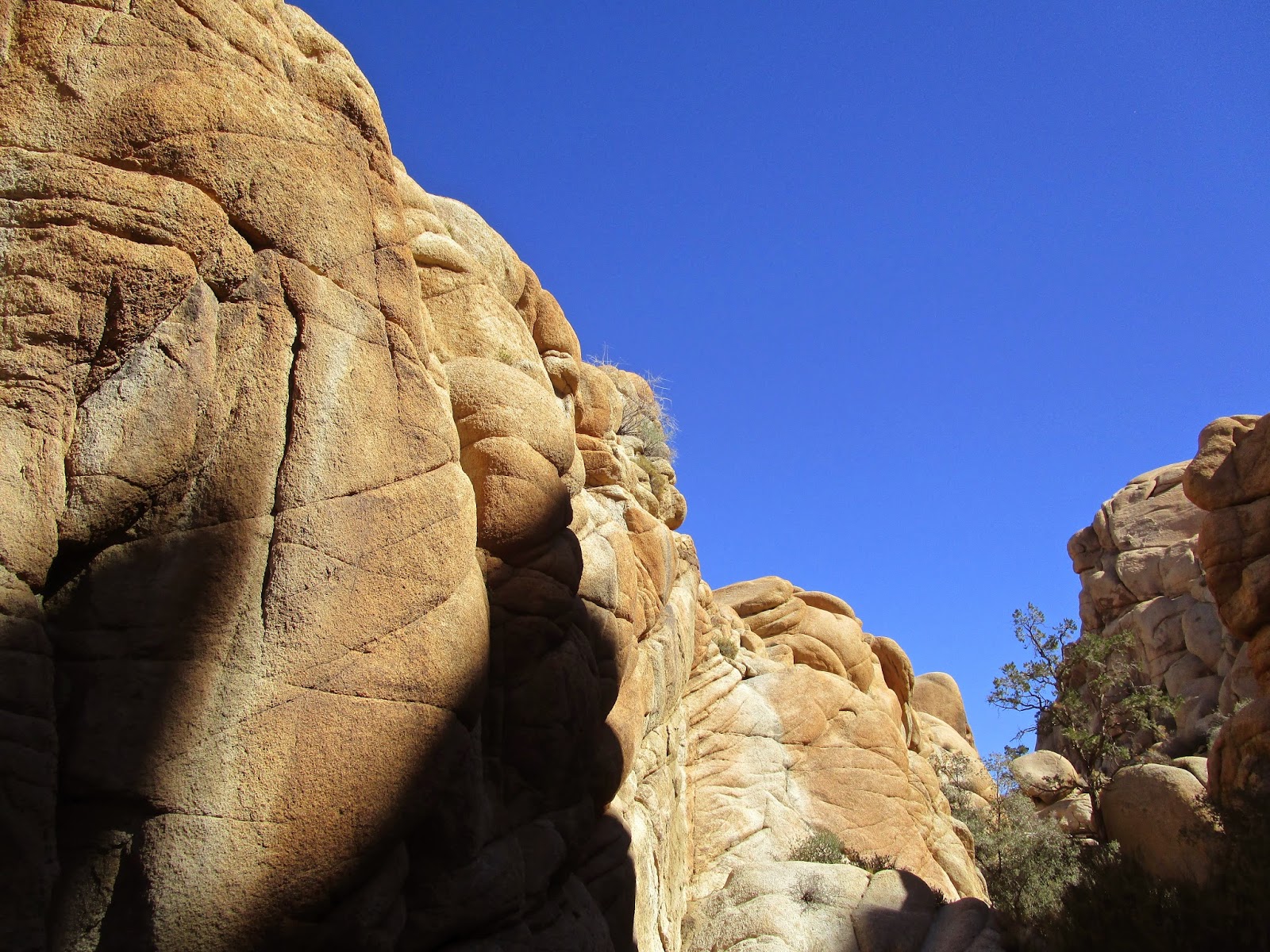 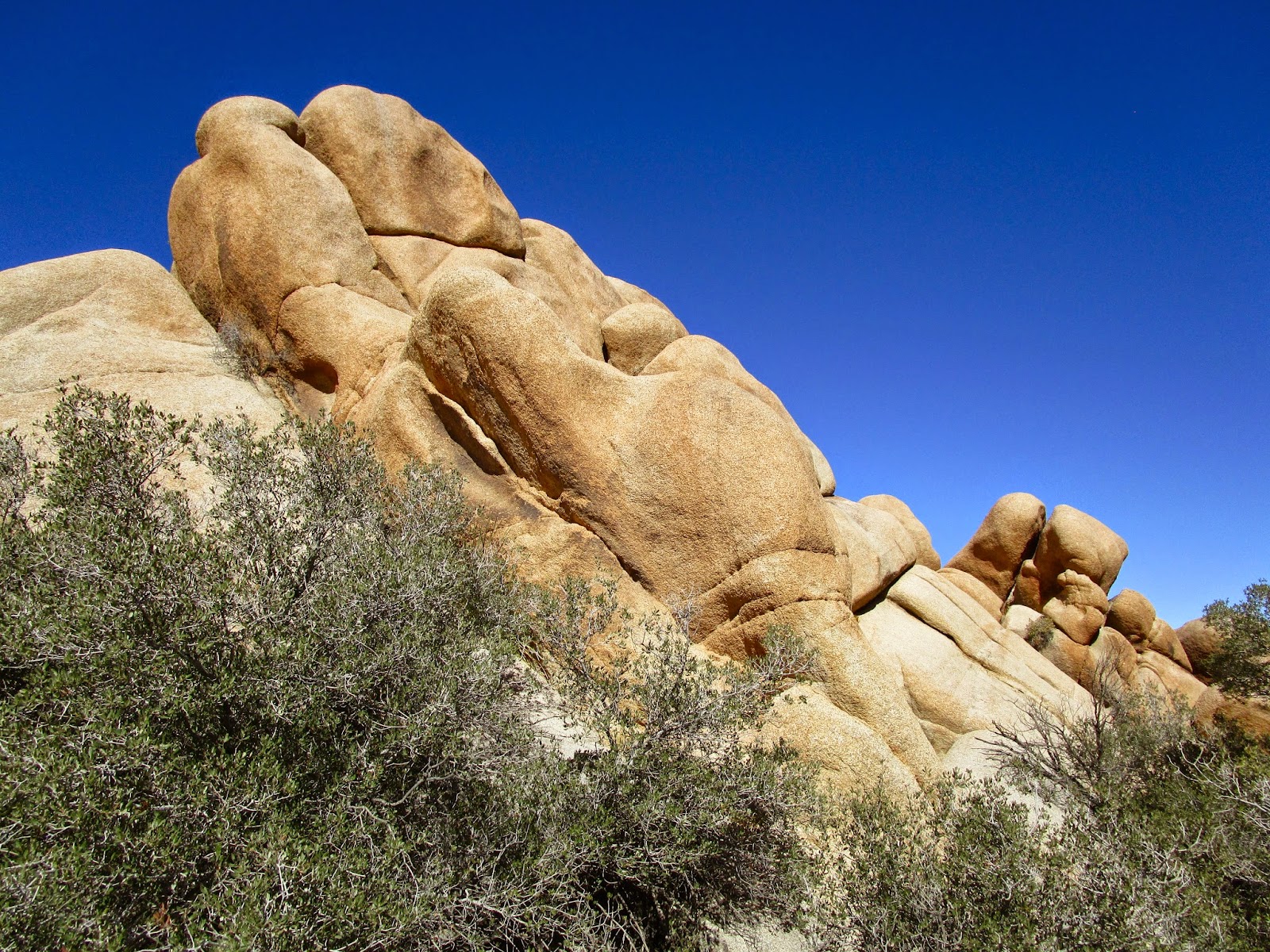 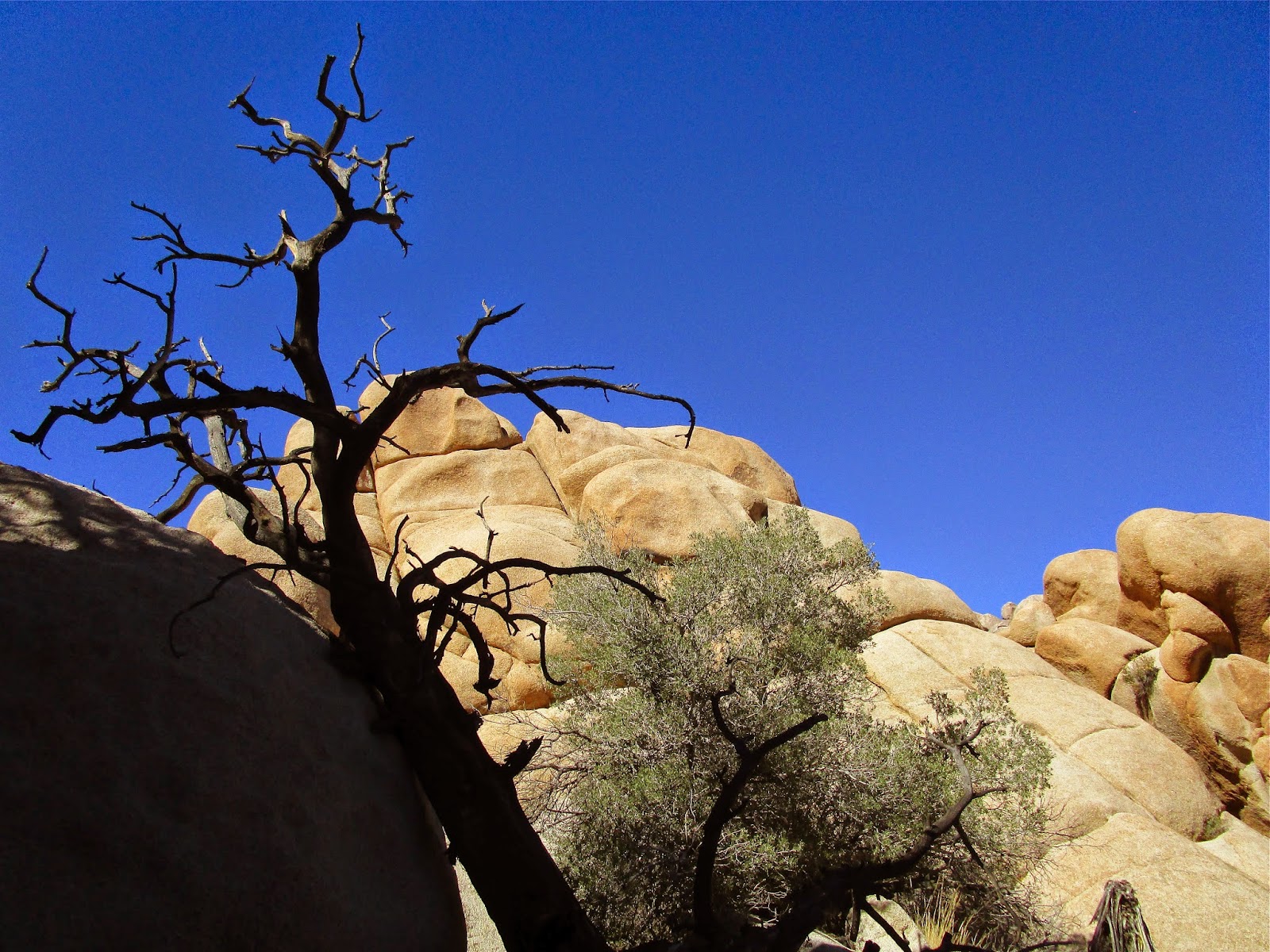 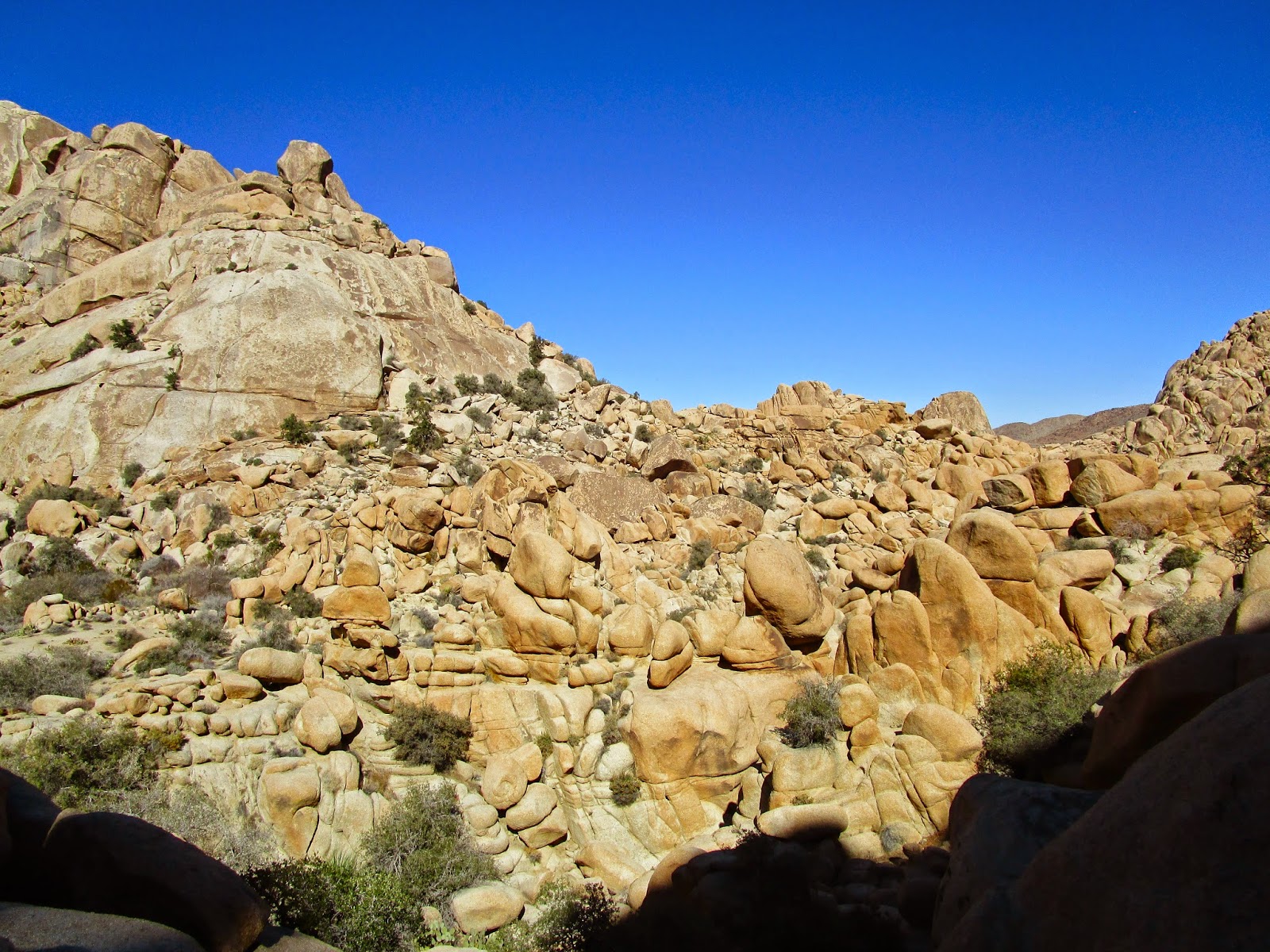 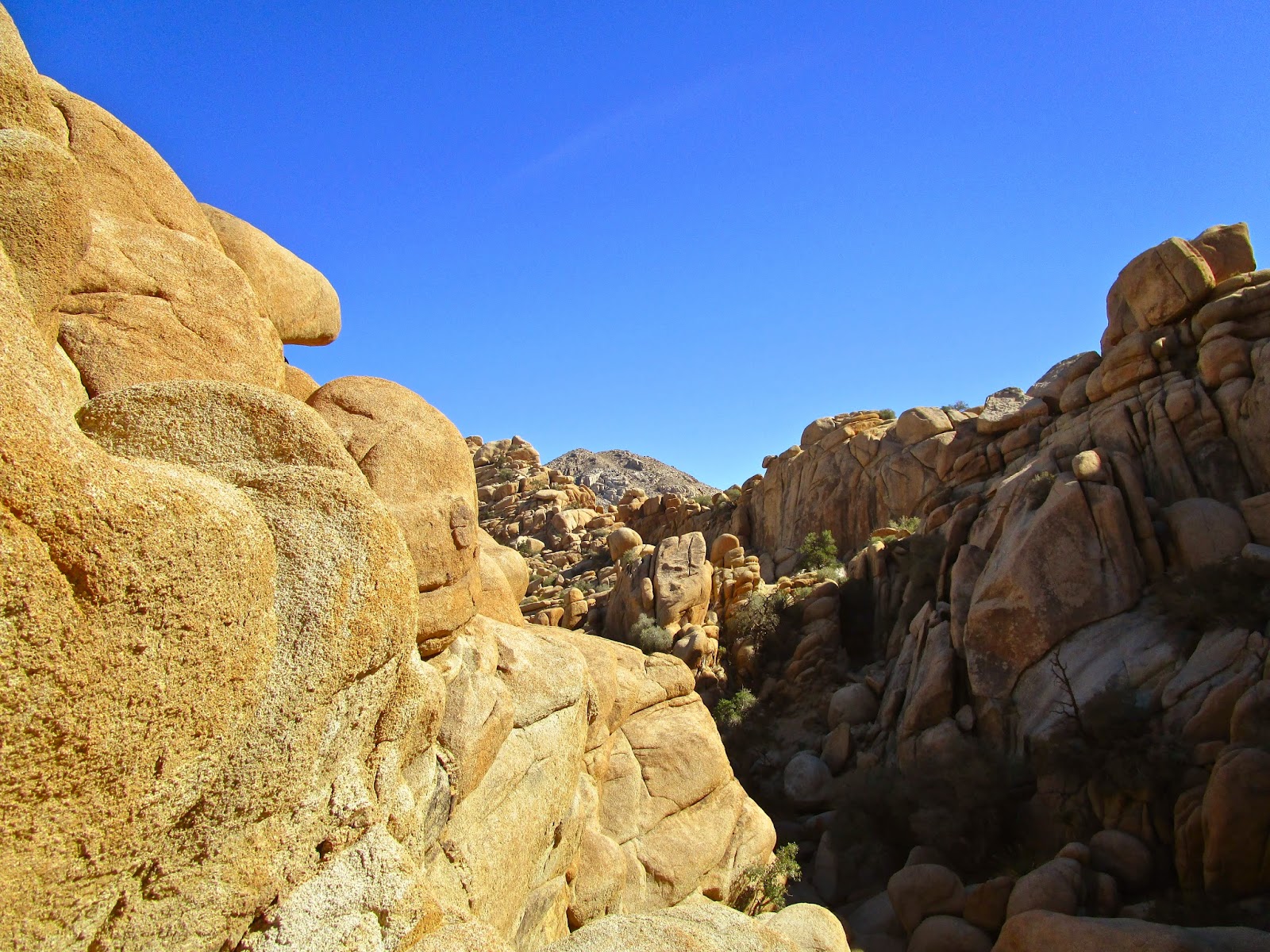 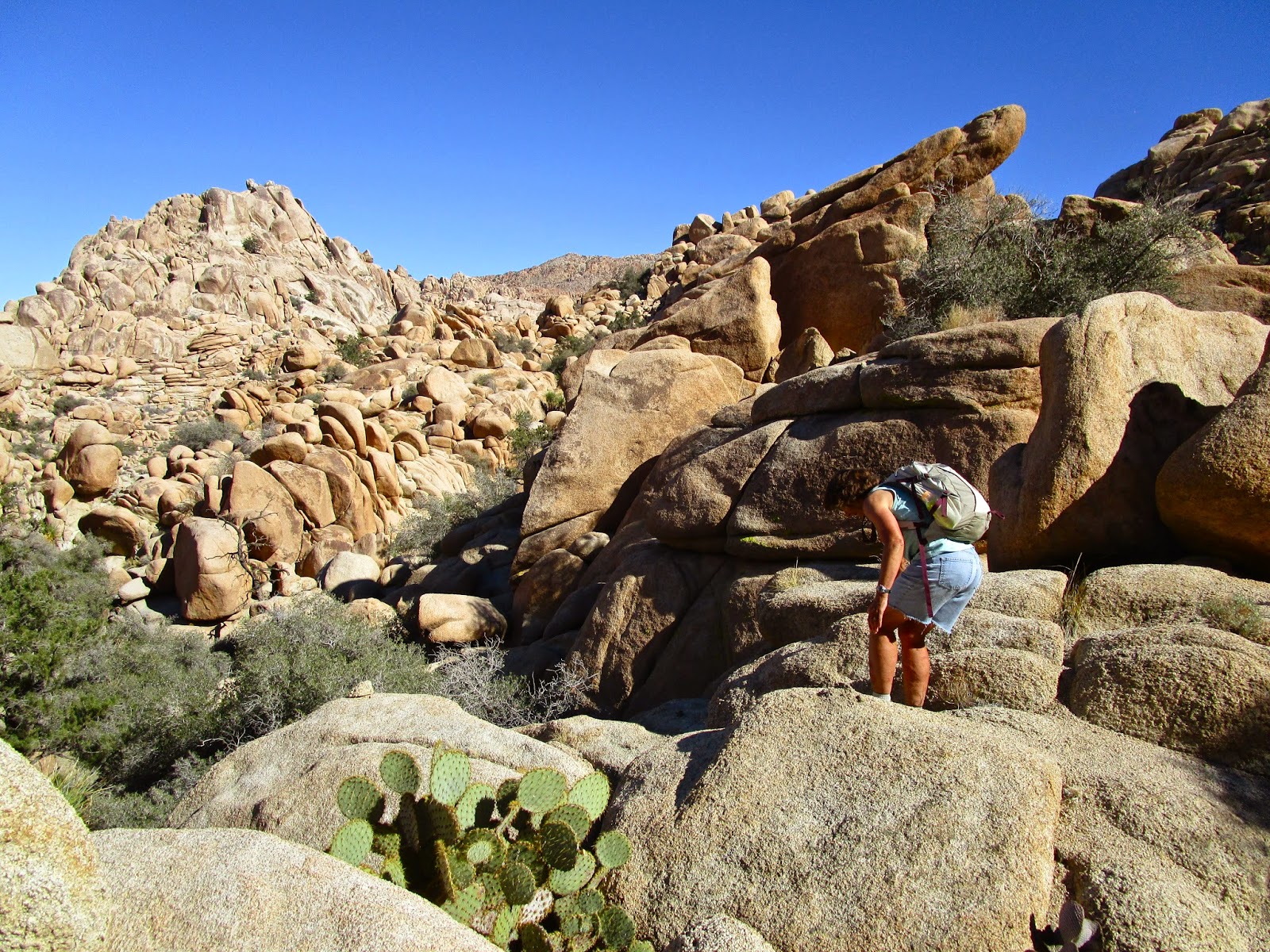 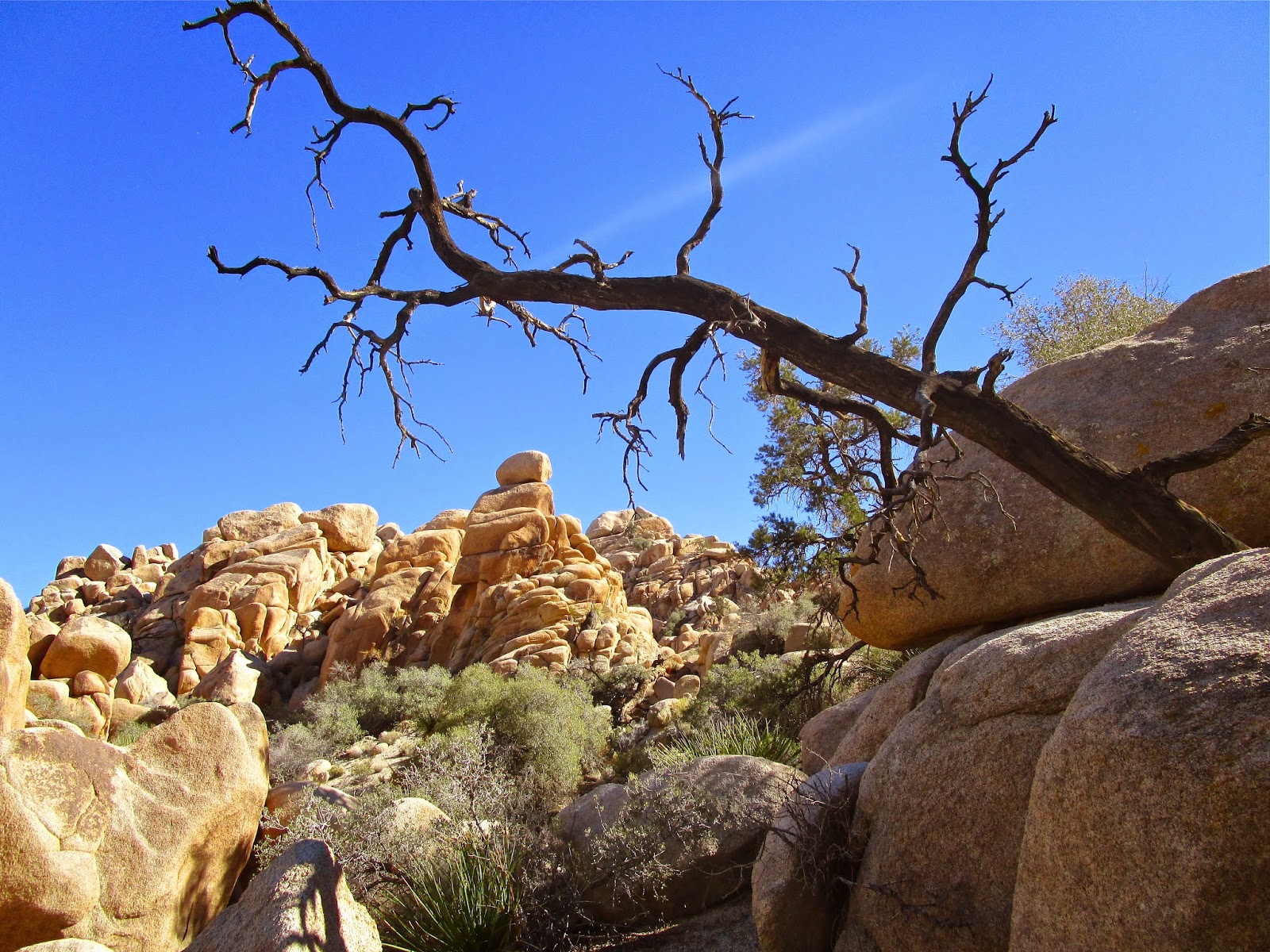 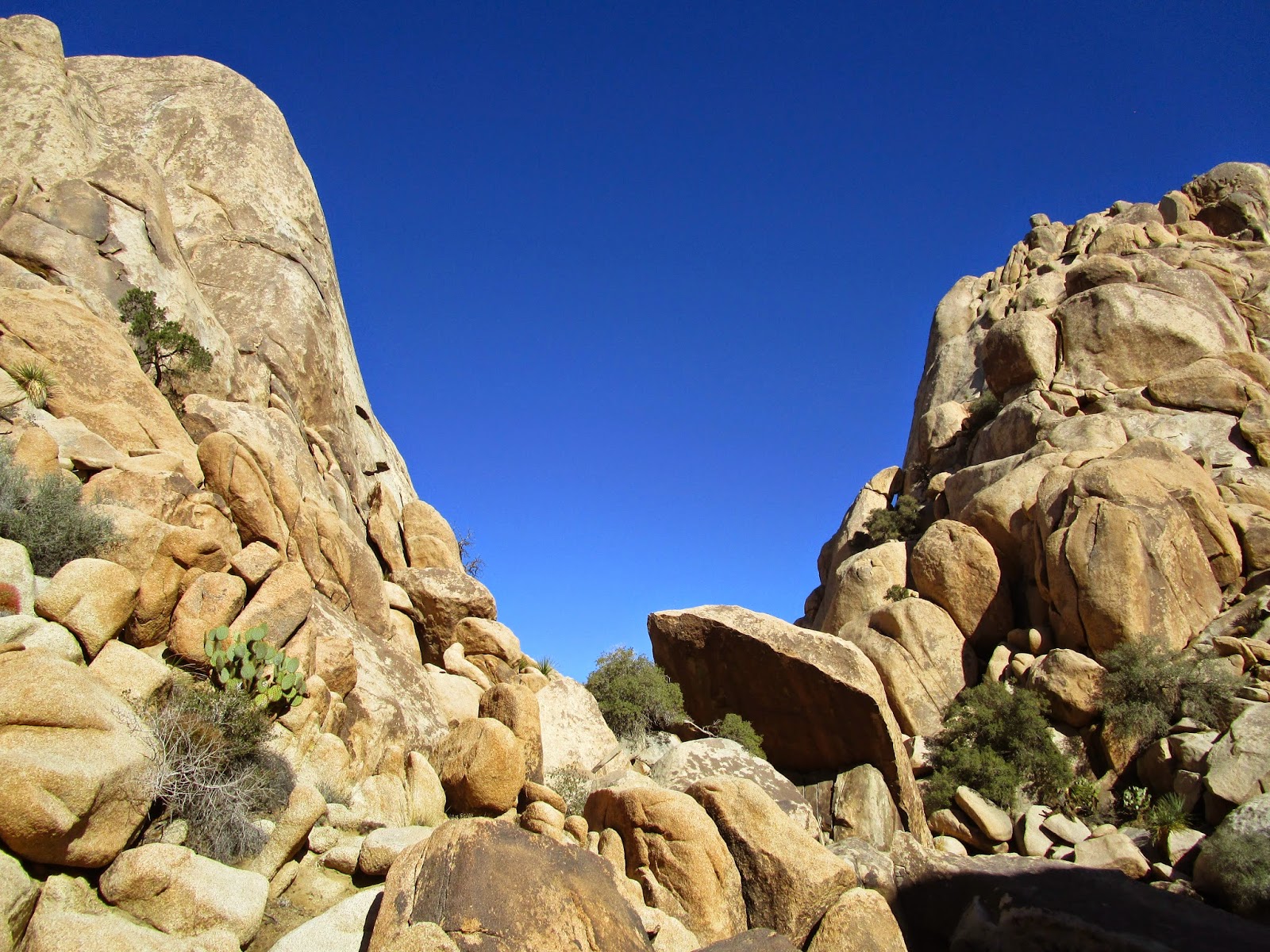 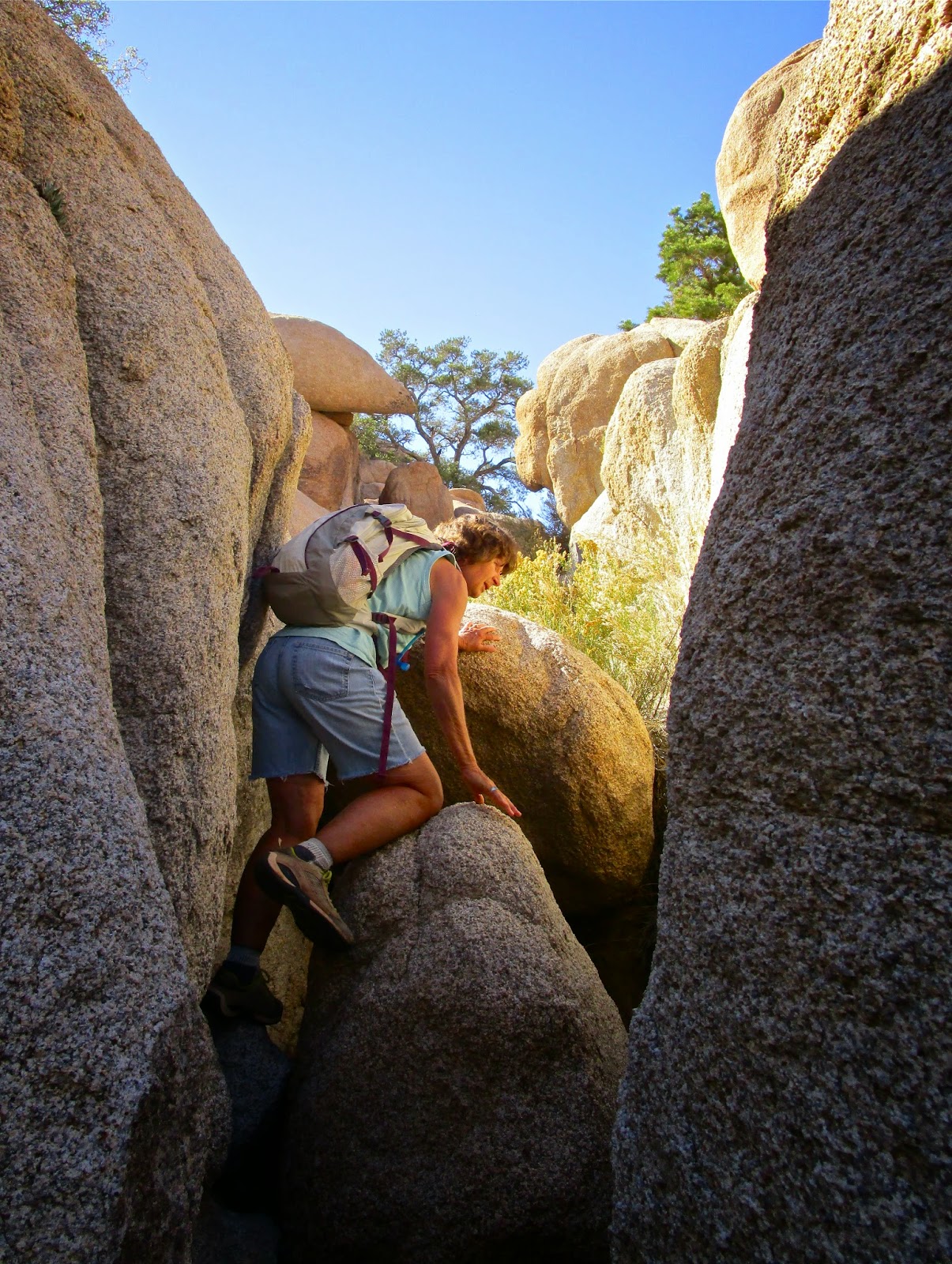 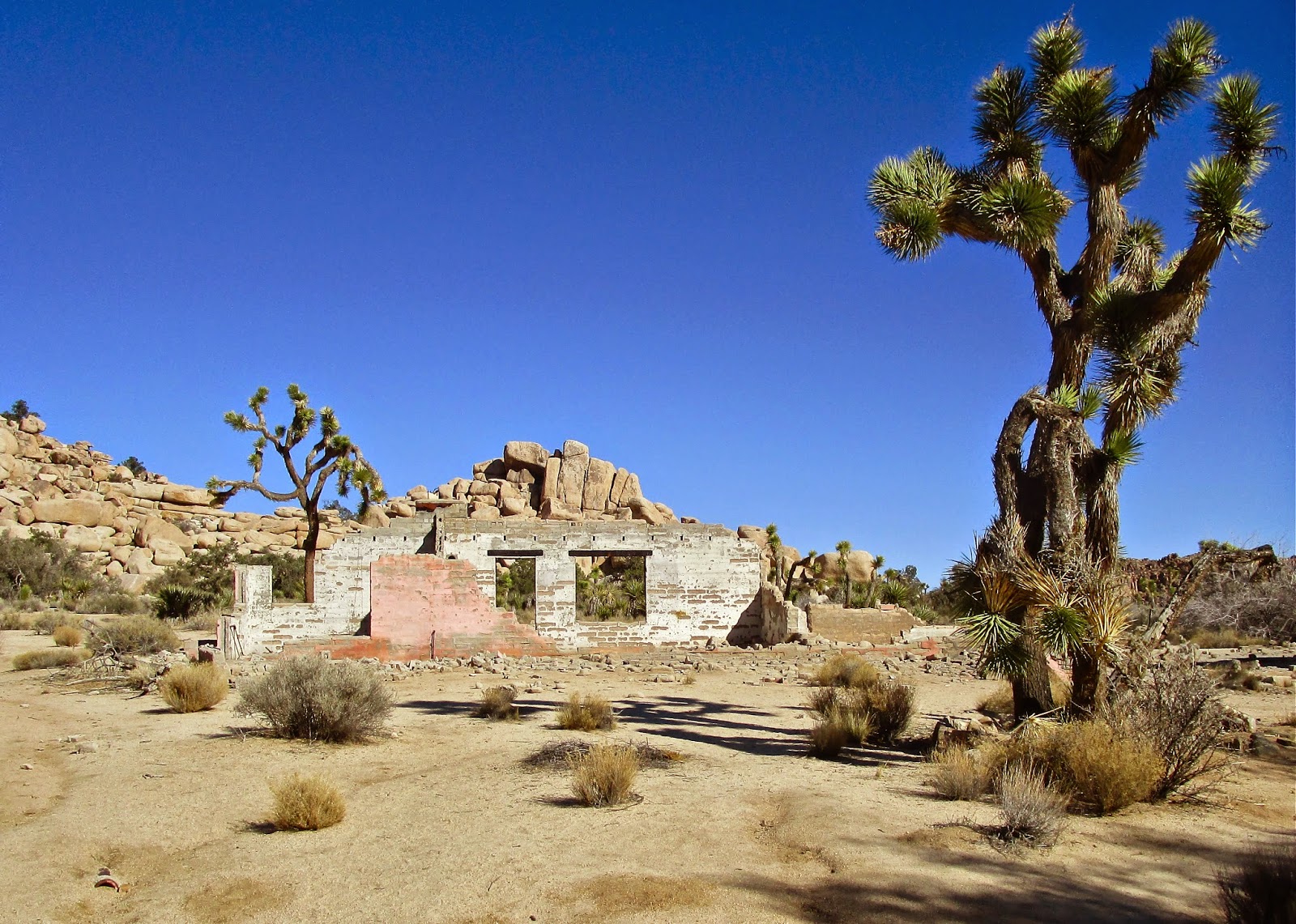 In time, the earth will reclaim man's greatest accomplishments, and correct all our mistakes. Imagine, Extinction, wrought by our own hands. How silly.
Posted by Box Canyon Blog.com at 4:11 PM