One Night in "Bangkok" is One Too Many: Desperately Seeking The Point of "Point of Rocks" 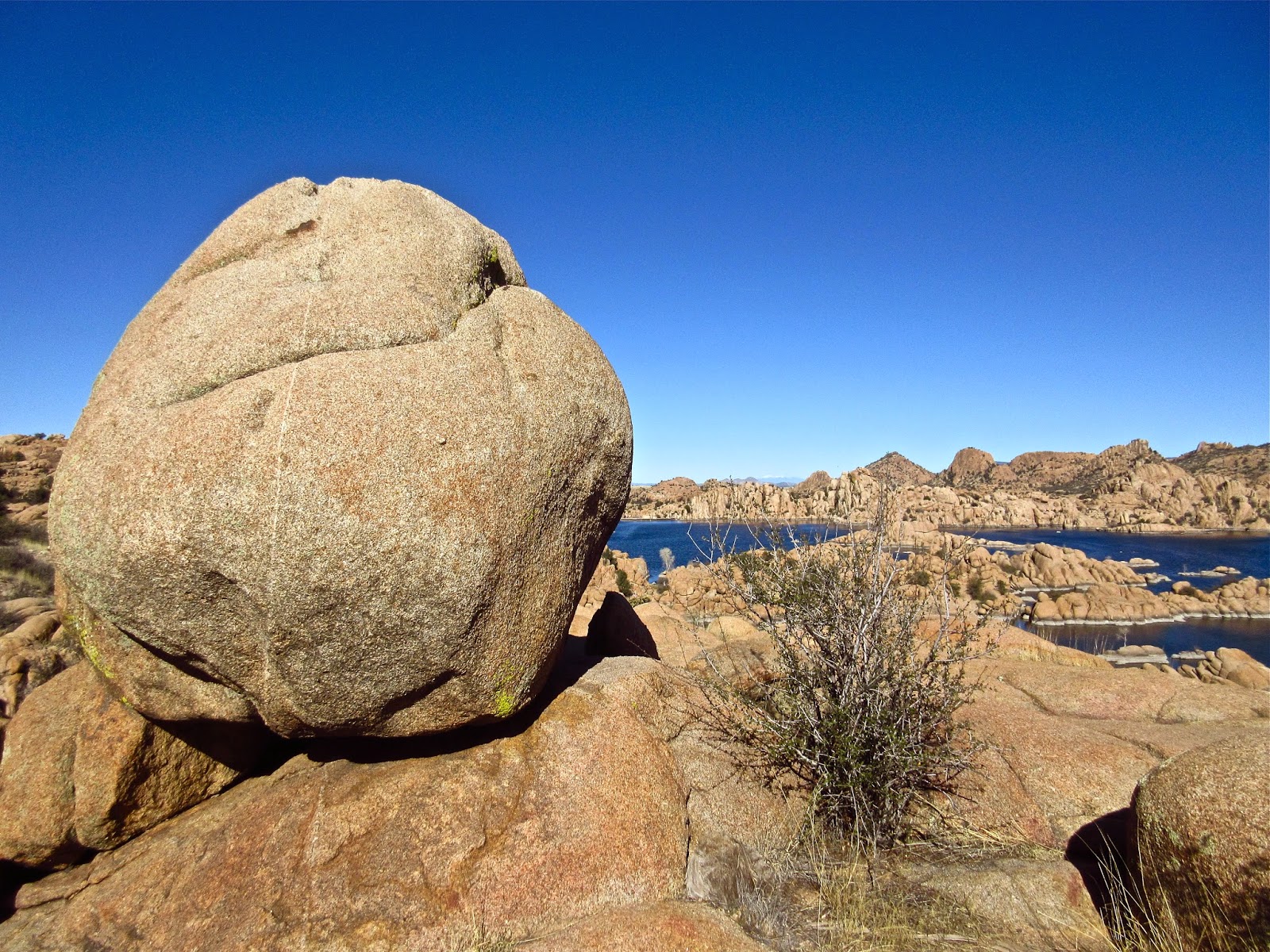 Bruised, scabbed, and spent, Grey and Black water maxed out, we departed Joshua—exchanging surreal-ness, granite boulders, and solitary explorations for the searing heat, crowds, dust, and nothing-ness of the infamous Quartzite… the biggest RV Snowbird blight ever perpetrated upon a landscape outside of Florida. Unlike Bangkok, "One Night In Quartzite" is one too many.


Don't get me wrong, the greatest beauty is often found in "nothing-ness," take Death Valley, for example. But to me, a sea of RV squalor, with all the accoutrement-al dust-raising vehicles—Mini Cooper toads to semi-truck tractors, sewage sucking tankers, and a thousand ATVs all running amok—well, it certainly isn't the peaceful, wilderness camping experience depicted on RV brochures. Add to that the Barnum and Bailey's Three-ring Bigtop Circus/freak-show and coronary artery blocking fast food, don't count on us for anything more than a one night layover. KOFA, just fifteen miles distant, is a different story entirely. But hardly a soul camps there. I don't get it.

Maybe it's just our bad luck, but we have yet to happen upon the much advertised pleasant winter weather in Q; it's either too hot, too cold or too windy/dusty, not to mention too crowded, thus, too depressing.

Really? Is this the best RV Dream you could come up with? is this what you worked, slaved, and saved for your whole life—to sell your home-sweet-home in order to cough up several hundred G's on a Class A motorhome just so you can squat for free in Quartzite? or even worse, stay in an RV park in Quartzite?

But, who am I to pee on another man's dream… 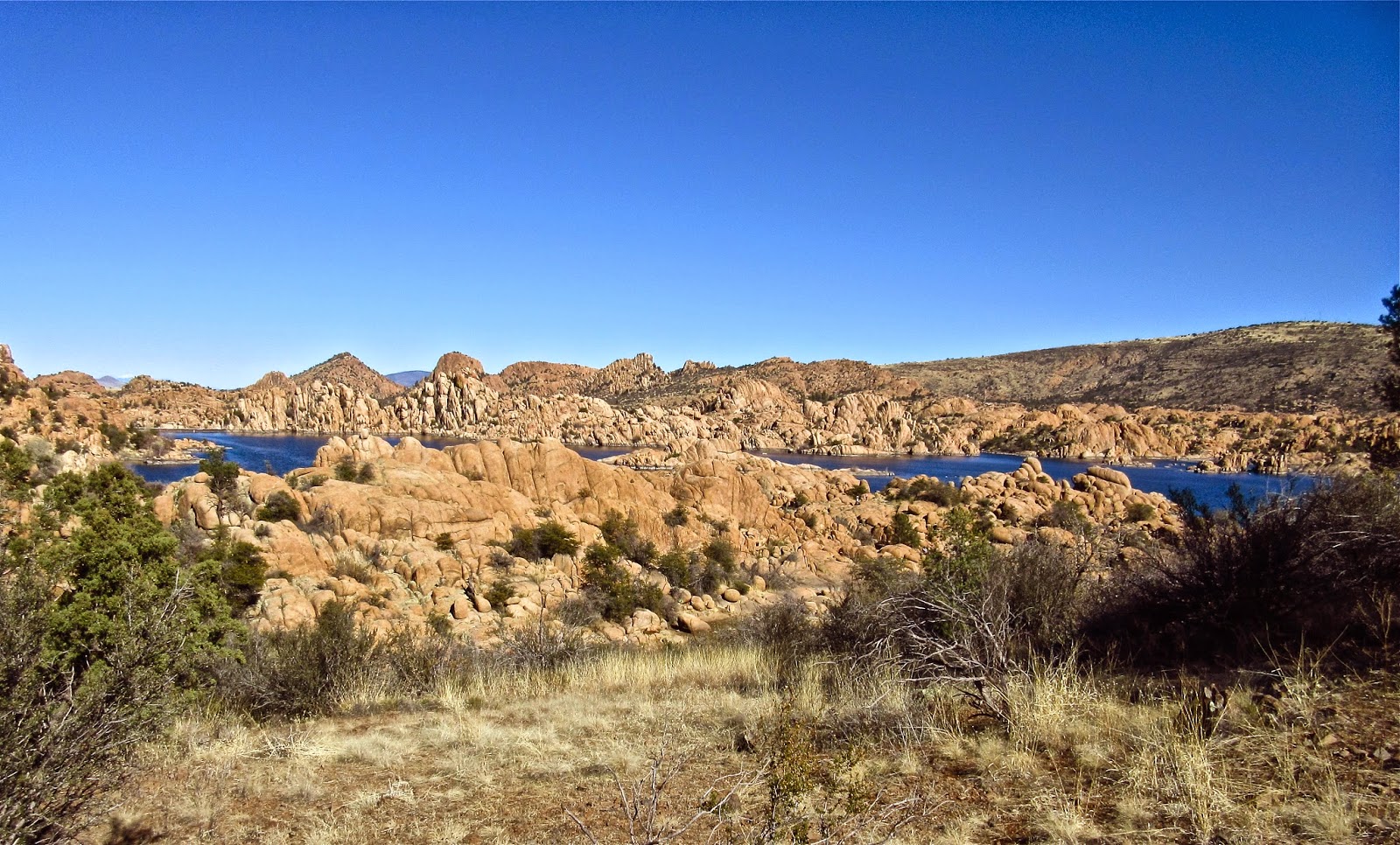 After a morning sweat-slog, we were off to the cooler climate of Prescott (pronounced "Presskit" by locals), and a place I had yet to check out… The Dells and Point of Rocks, with Watson and Willow Lakes beaming blue in a granite bouldered surround. We stayed at Point of Rocks Campground, where a short hike linked us to Watson Lake's sky-blue waters, biking and hiking trails, and an unlikely desert view. 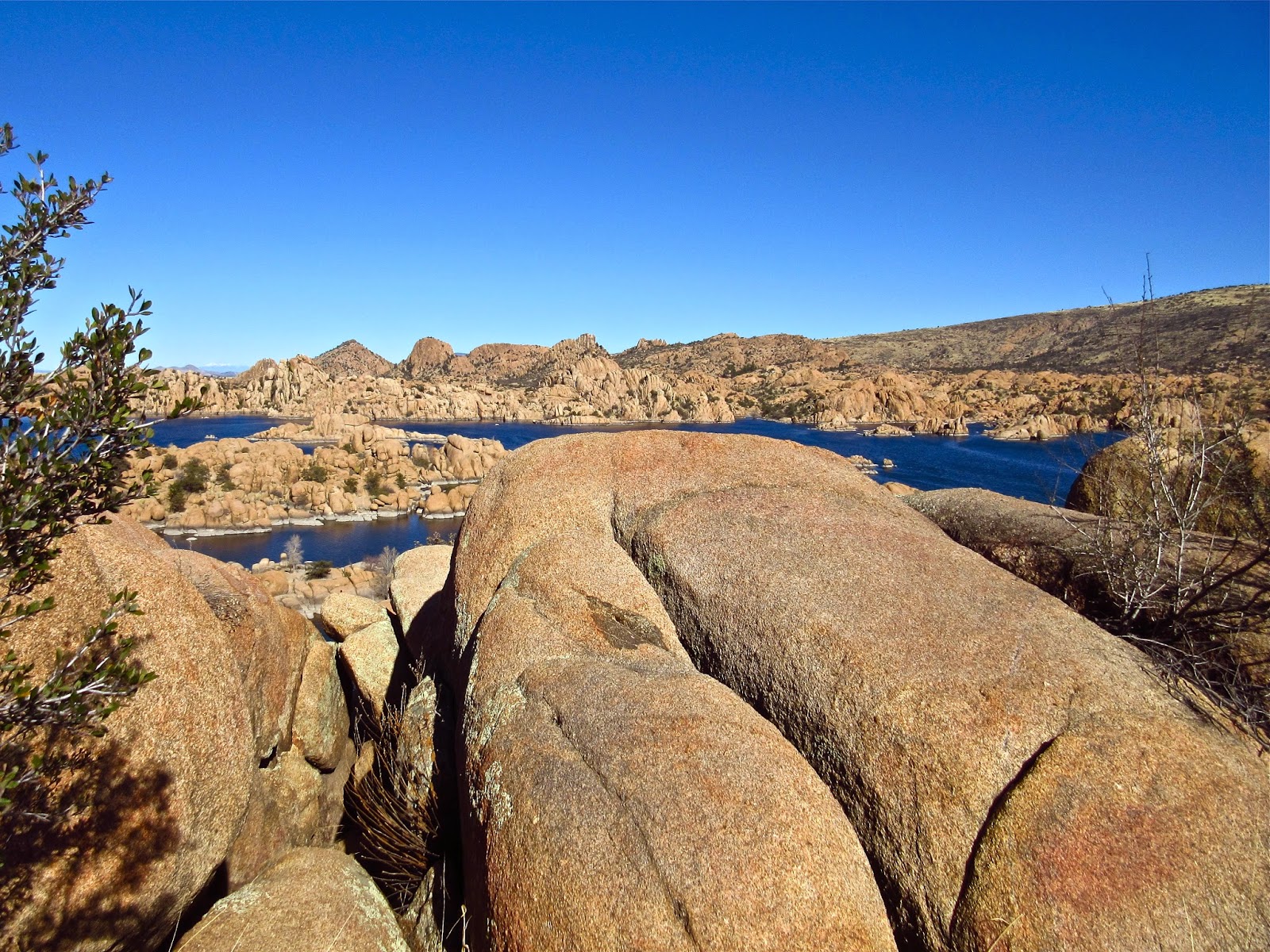 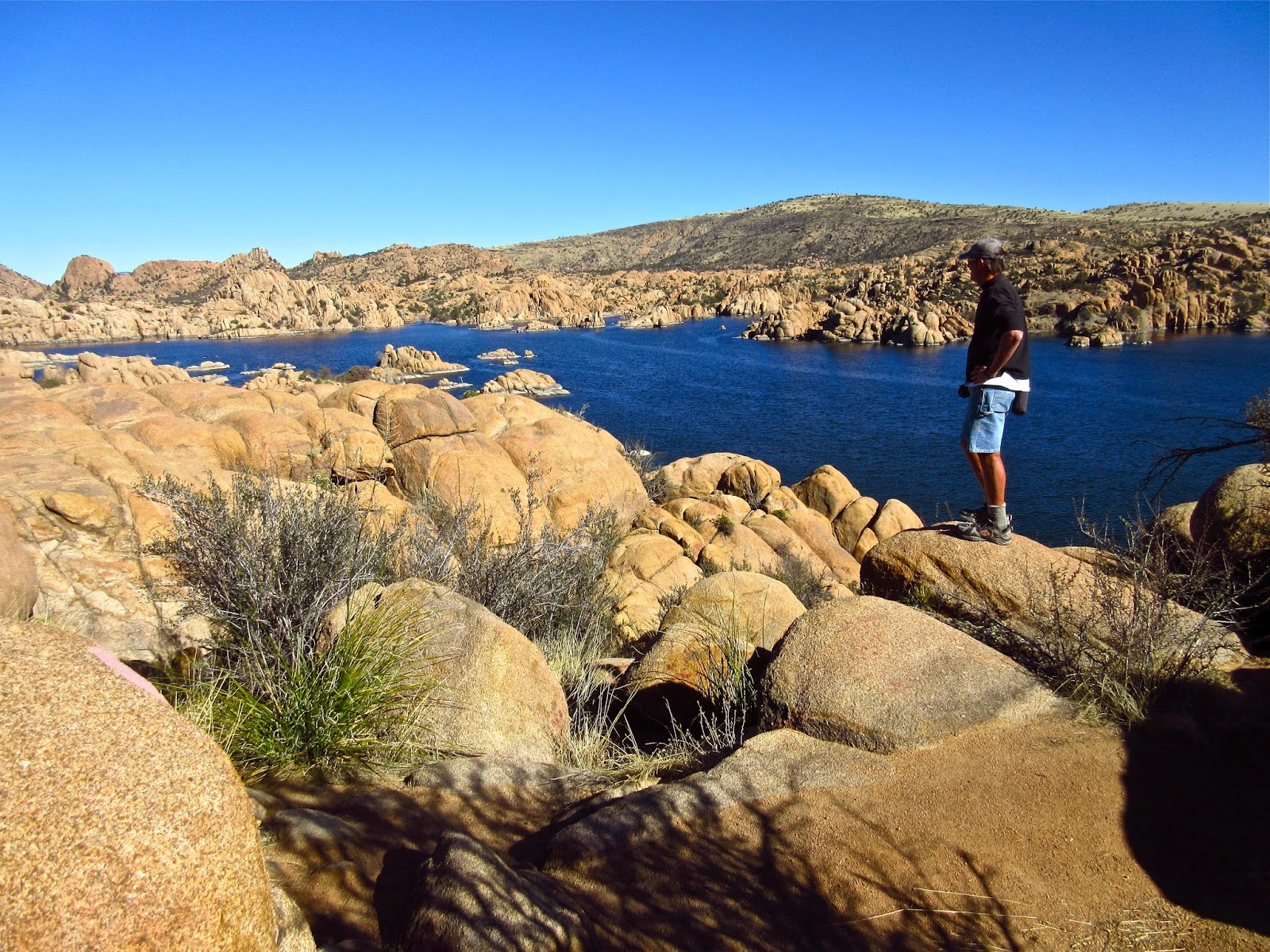 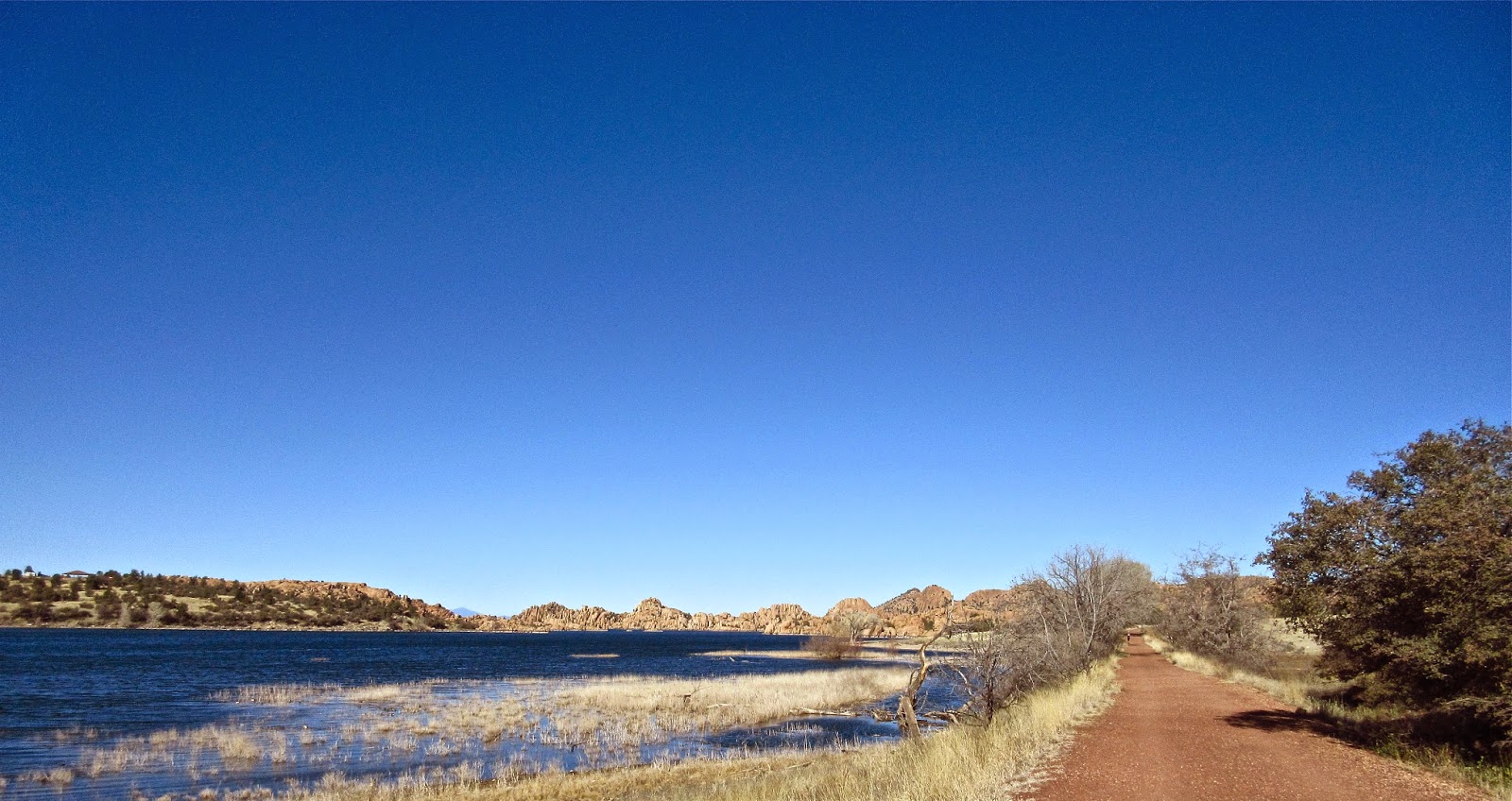 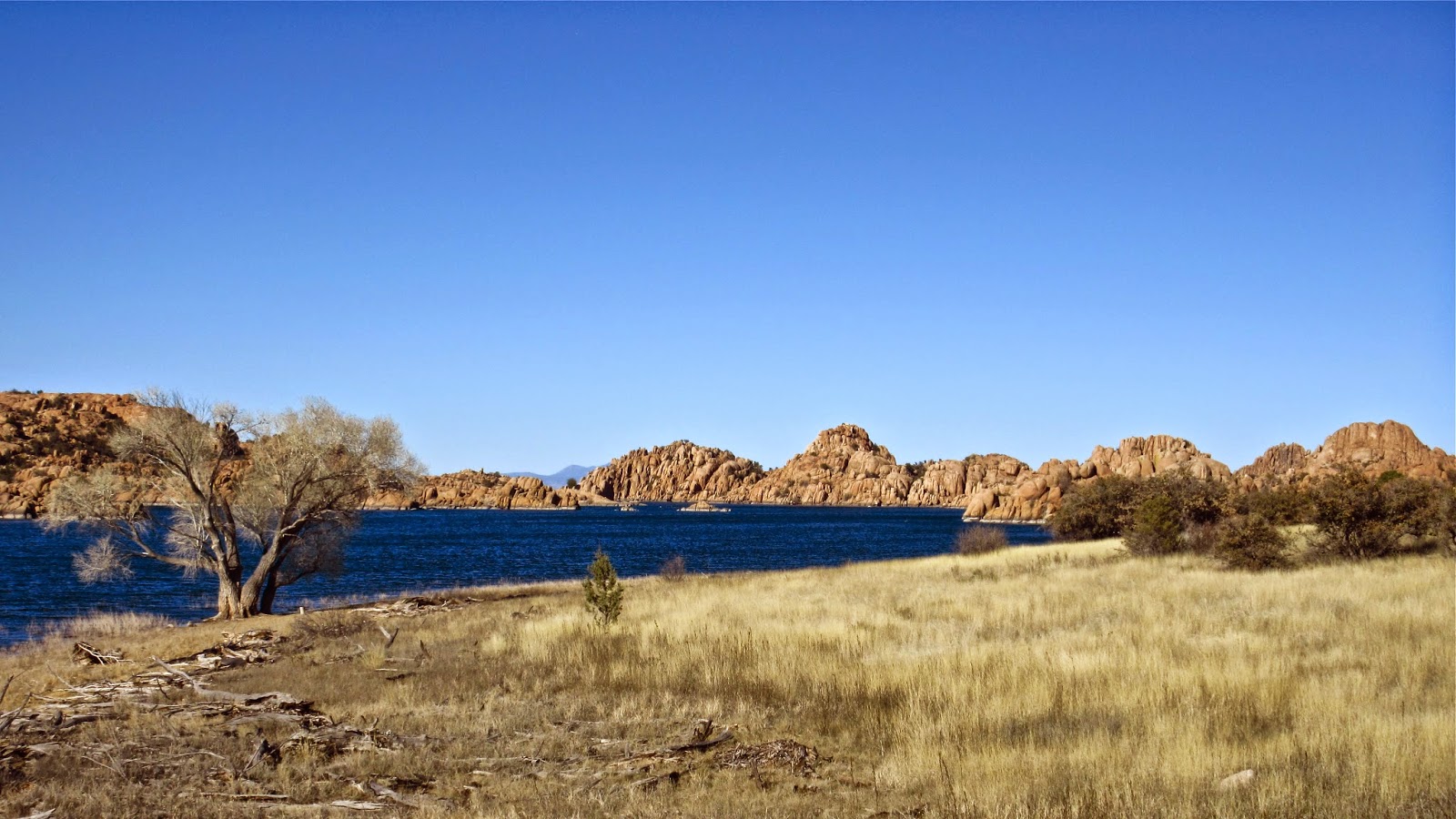 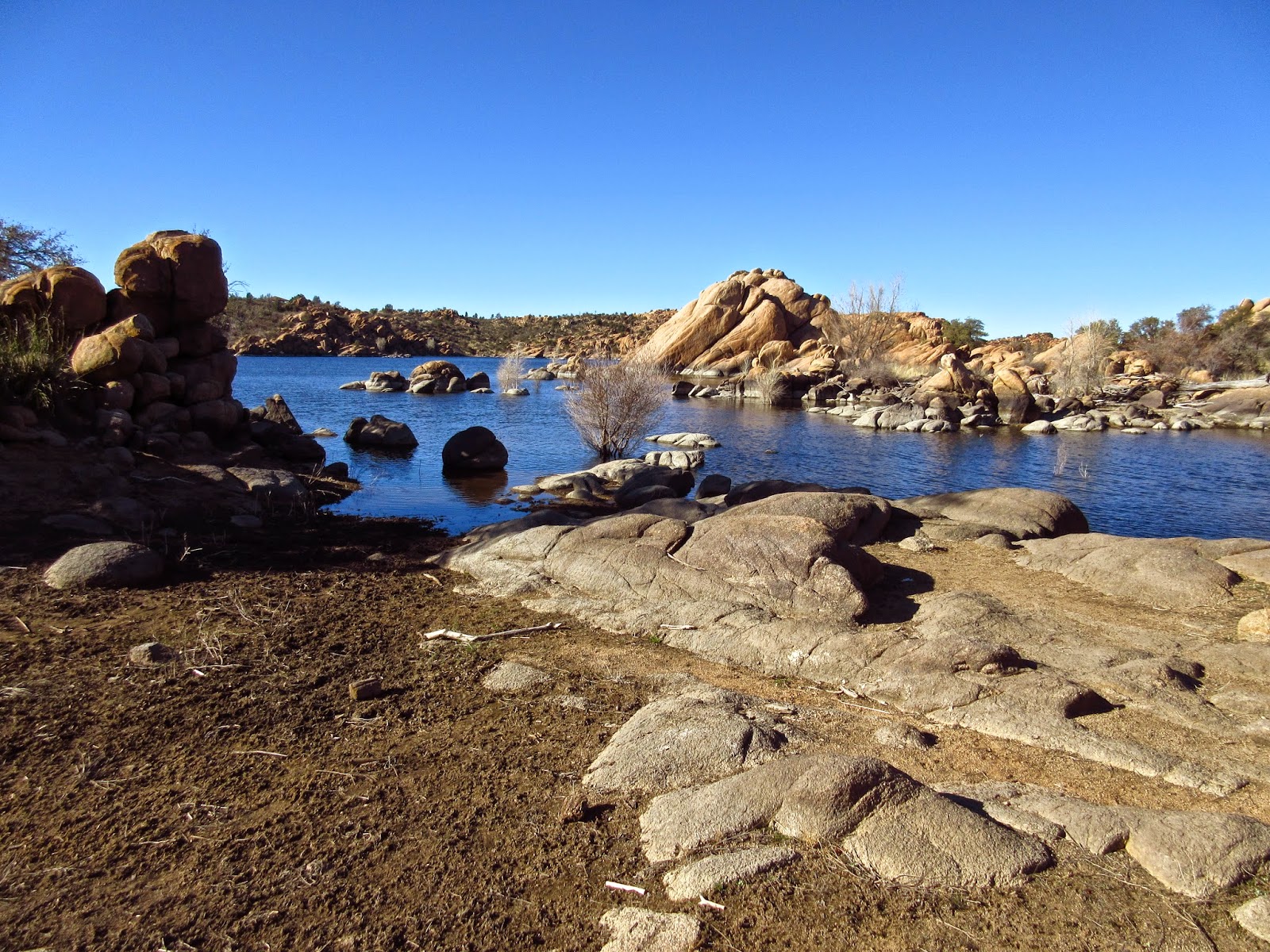 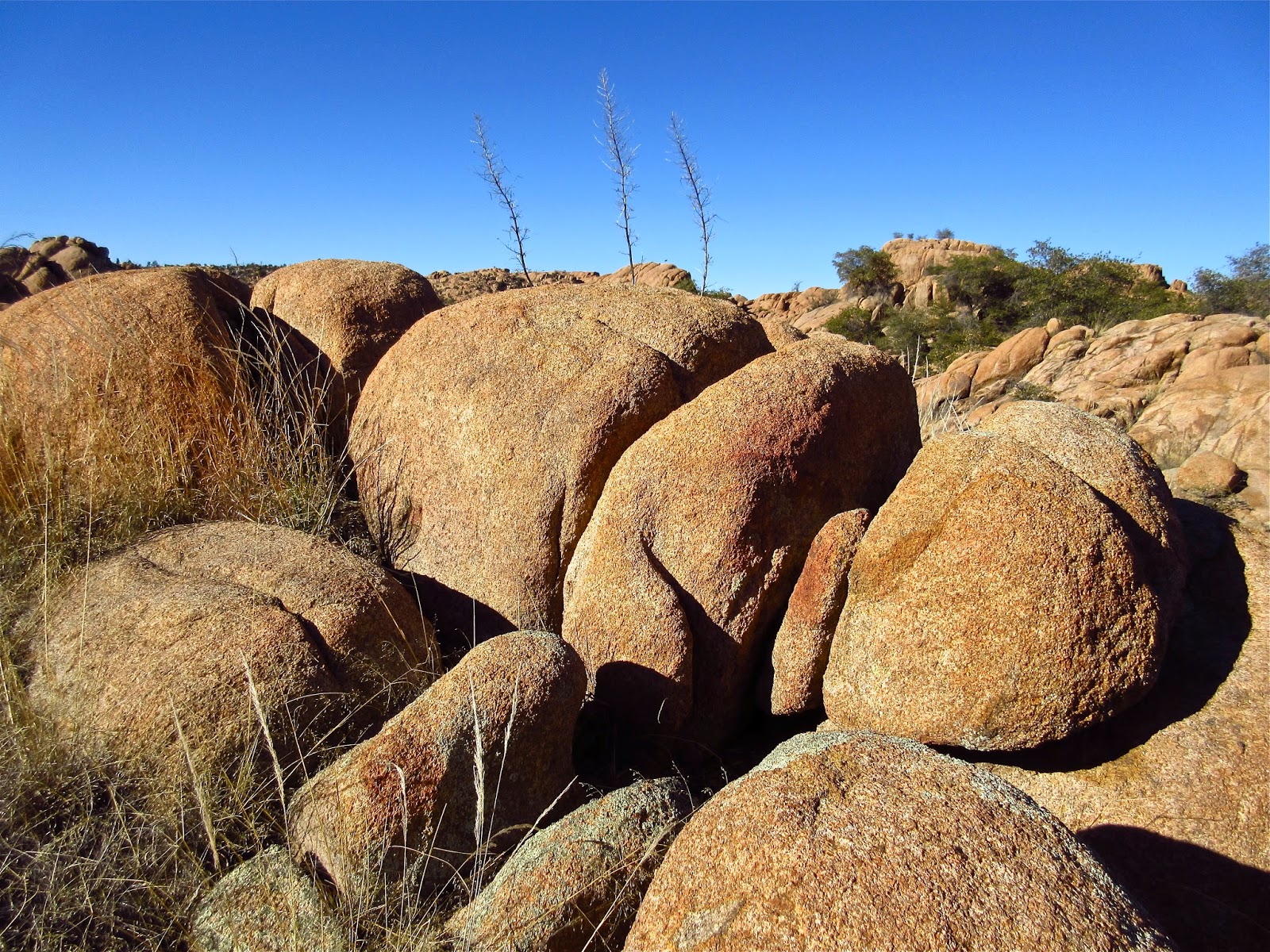 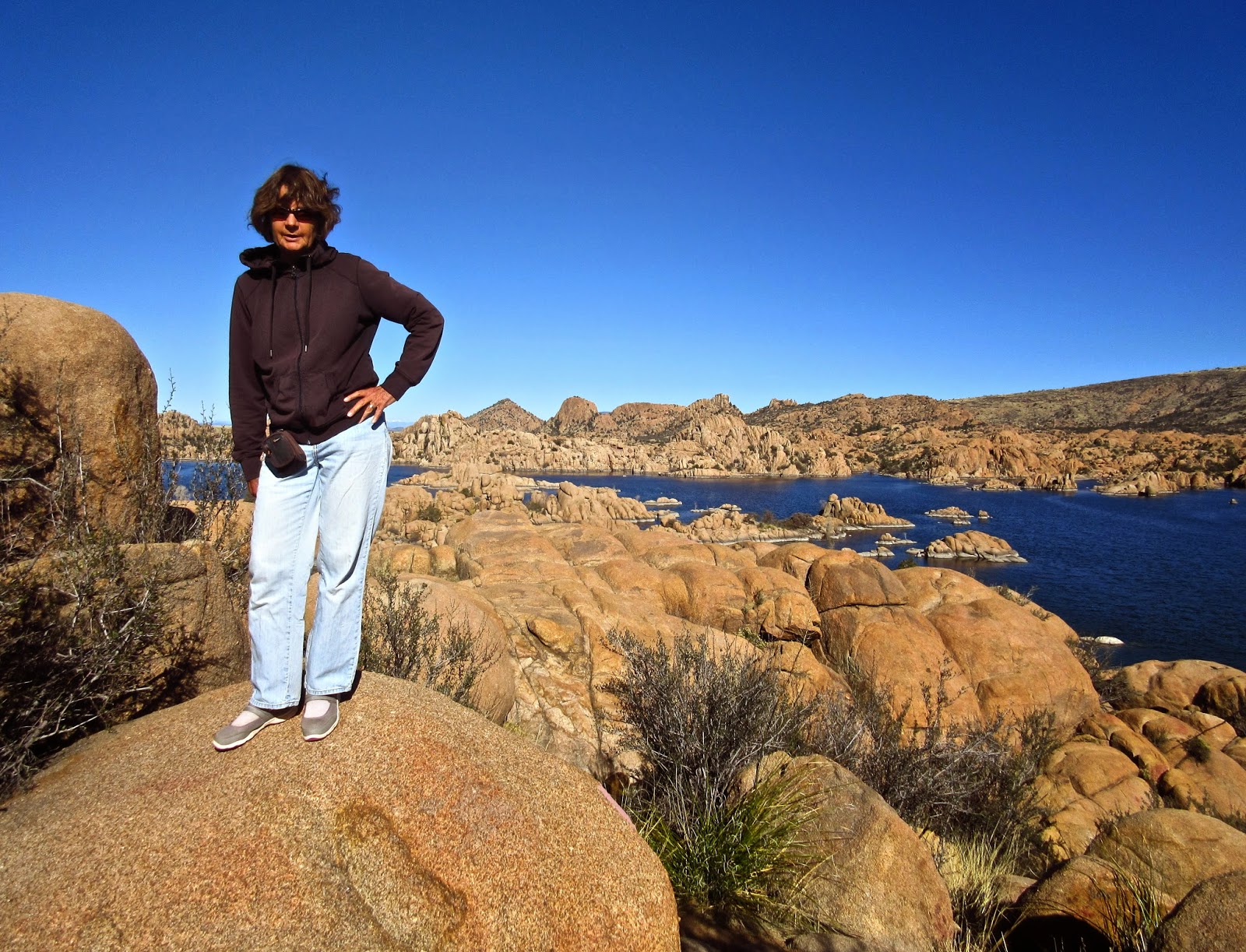 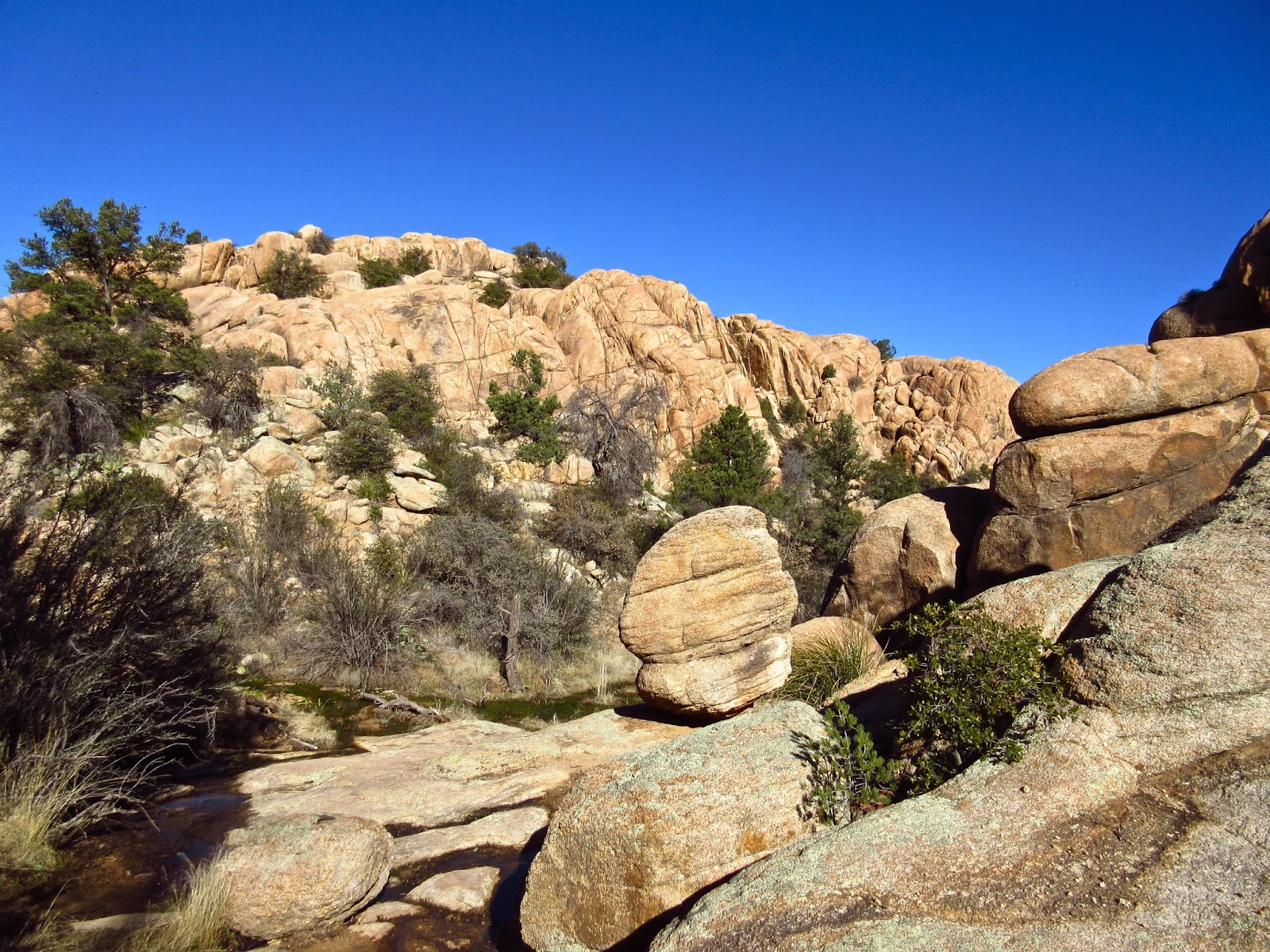 We got together for burgers and beer with world travelers Eric and Maureen of Two Scamps fame while in Prescott. It was great to see them again… all settled and snug and content in sticks and bricks… only a short walk from Willow Lake. The next day Maureen gave us a guided hike. 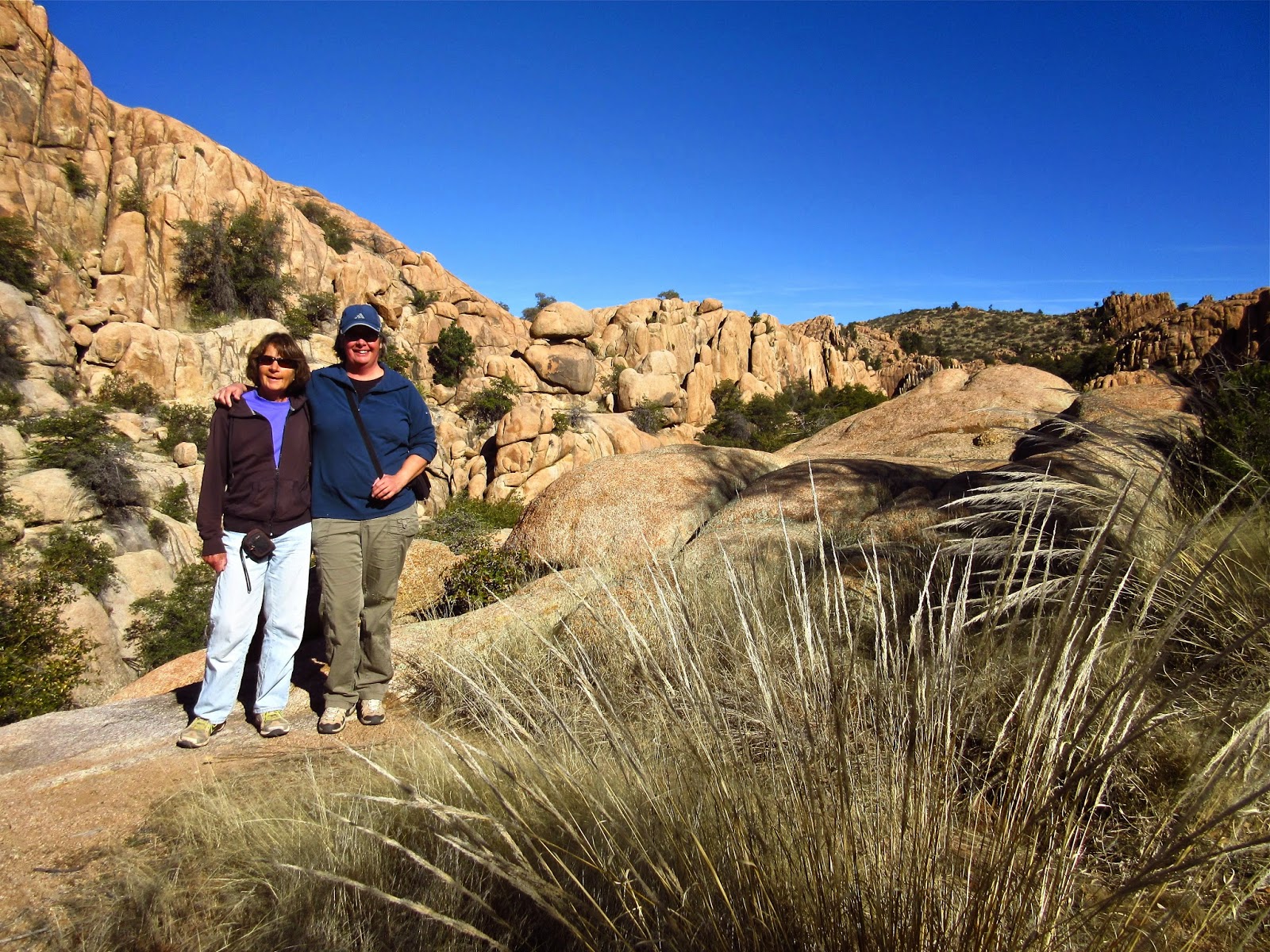 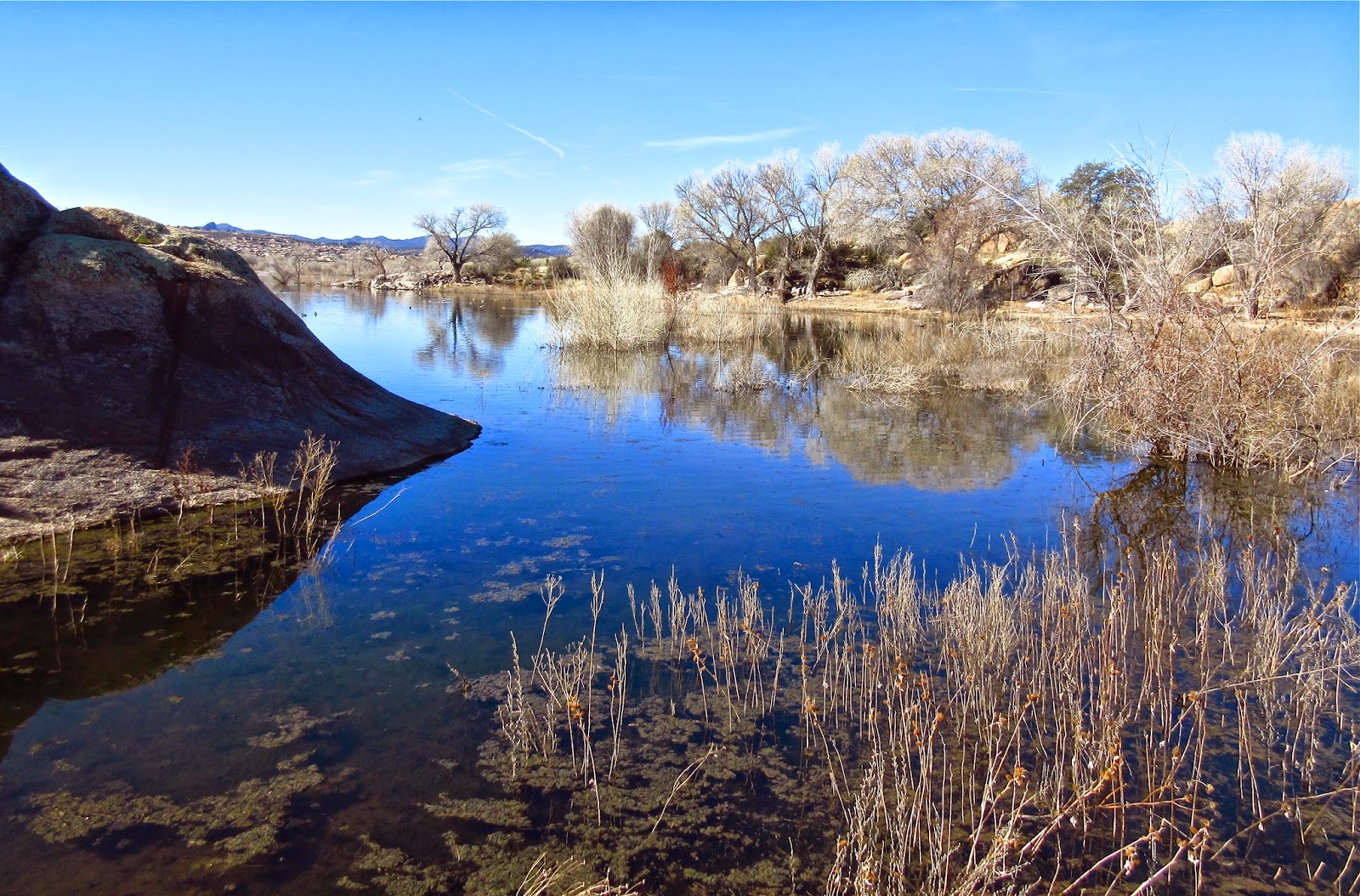 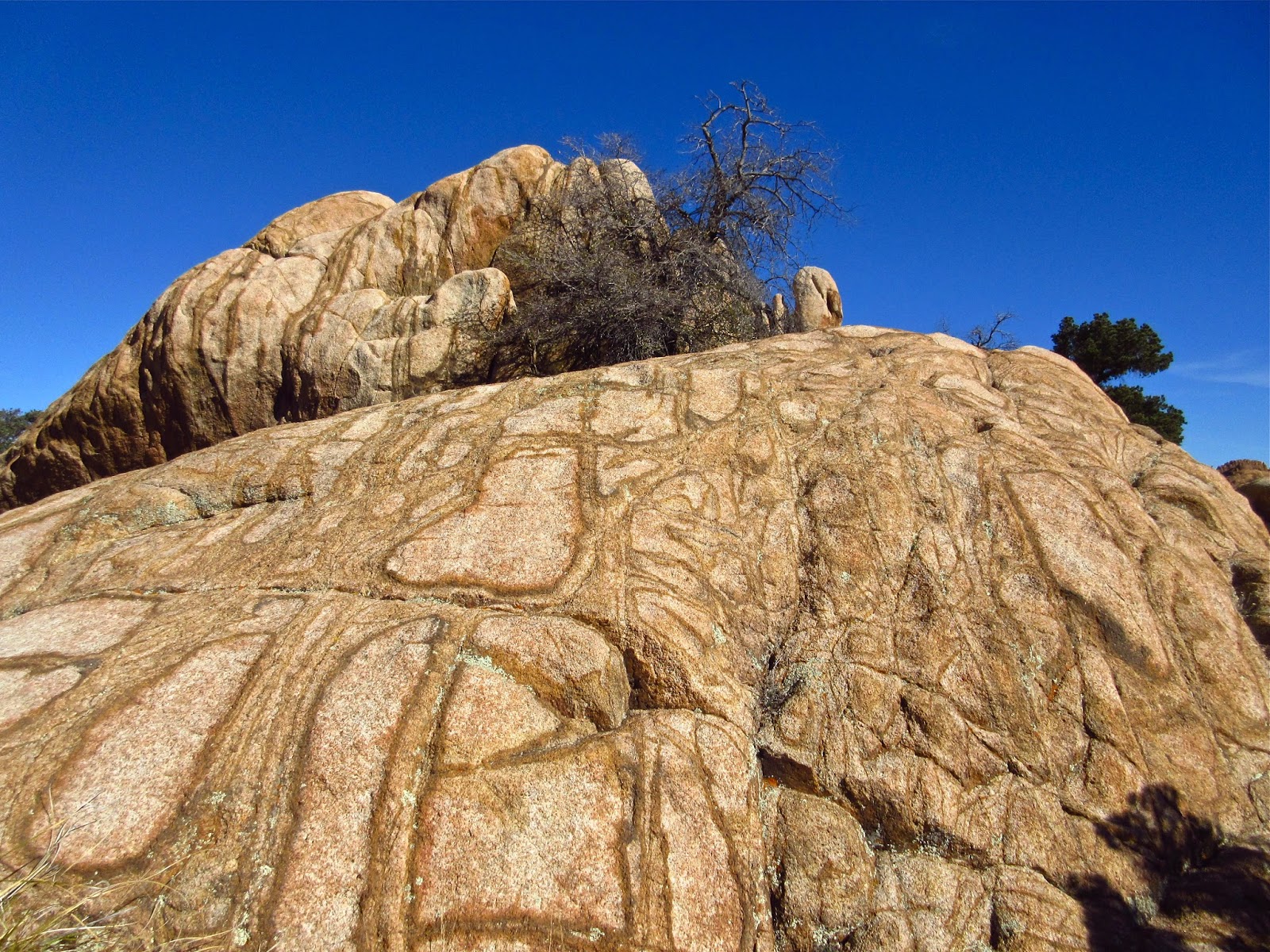 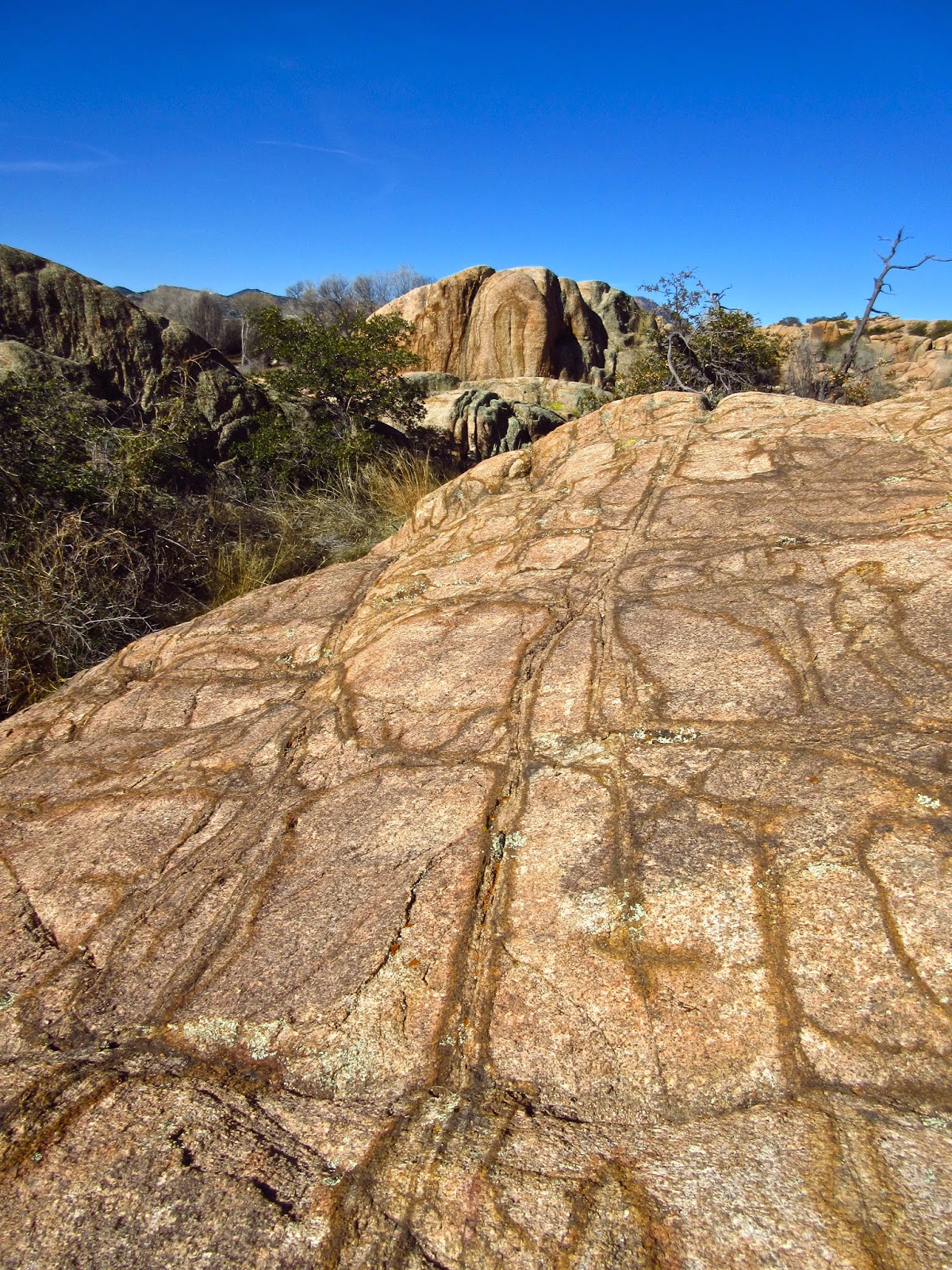 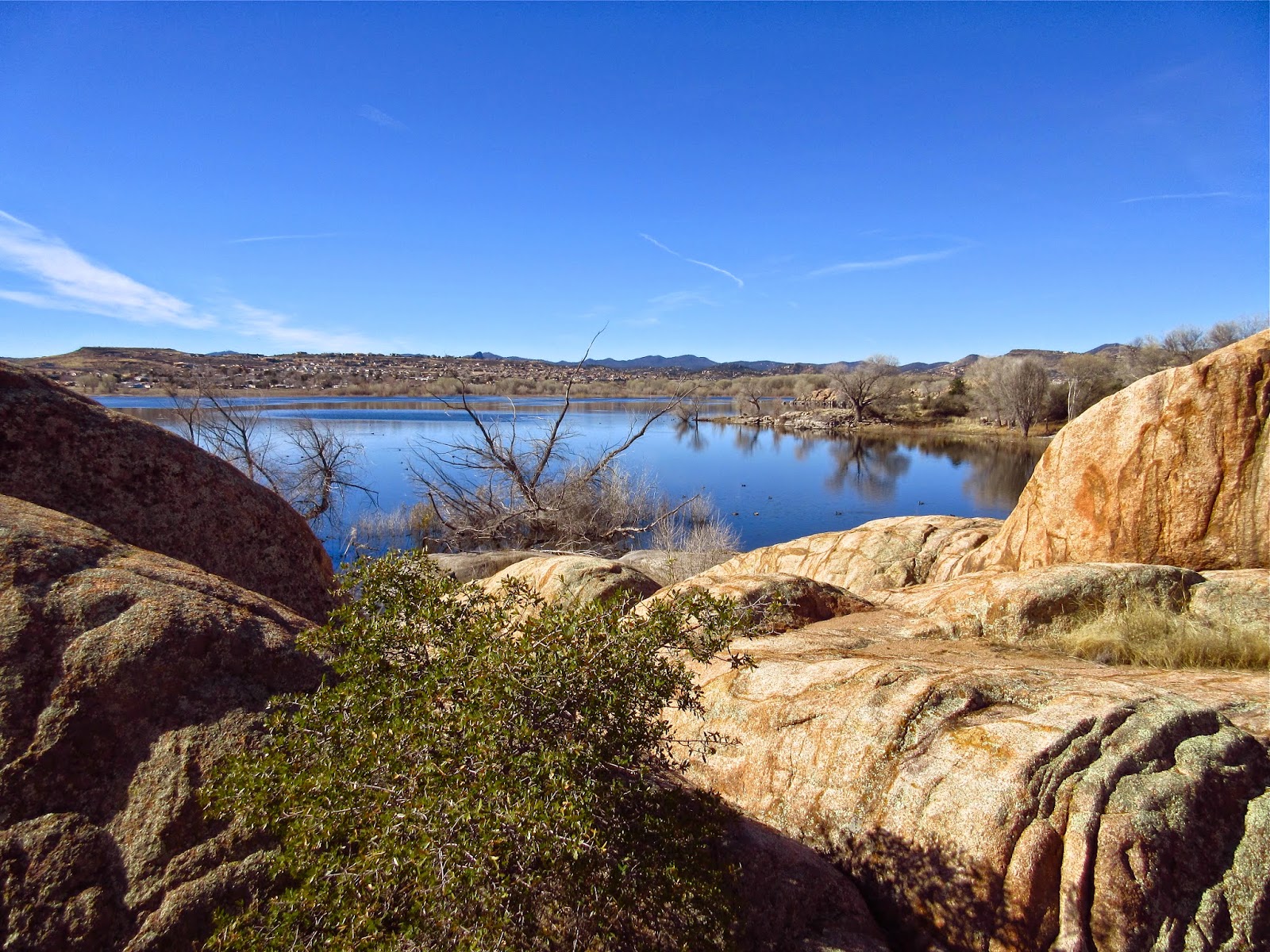 Maureen hatched a plan to kayak the Verde River north of Cottonwood while we were in the neighborhood. Of course!!!! More on that later.

As a little "holy" cow-boy, my parents use to ship me off to a summer bible camp near Prescott. There, under the spell of granite boulders and ponderosa pines, I was annually brainwashed by adult propagandizers on the finer arts and science of the one and only true religion… Pentecostalism. Everyone else, of course, was going to Hell in a hand basket, especially those Idolizing Catholics. How lucky… to randomly stumble (ejaculate) into a family with divine intuition when it came to selecting Religiosity. But for the grace of God, I could have been born a Baptist! 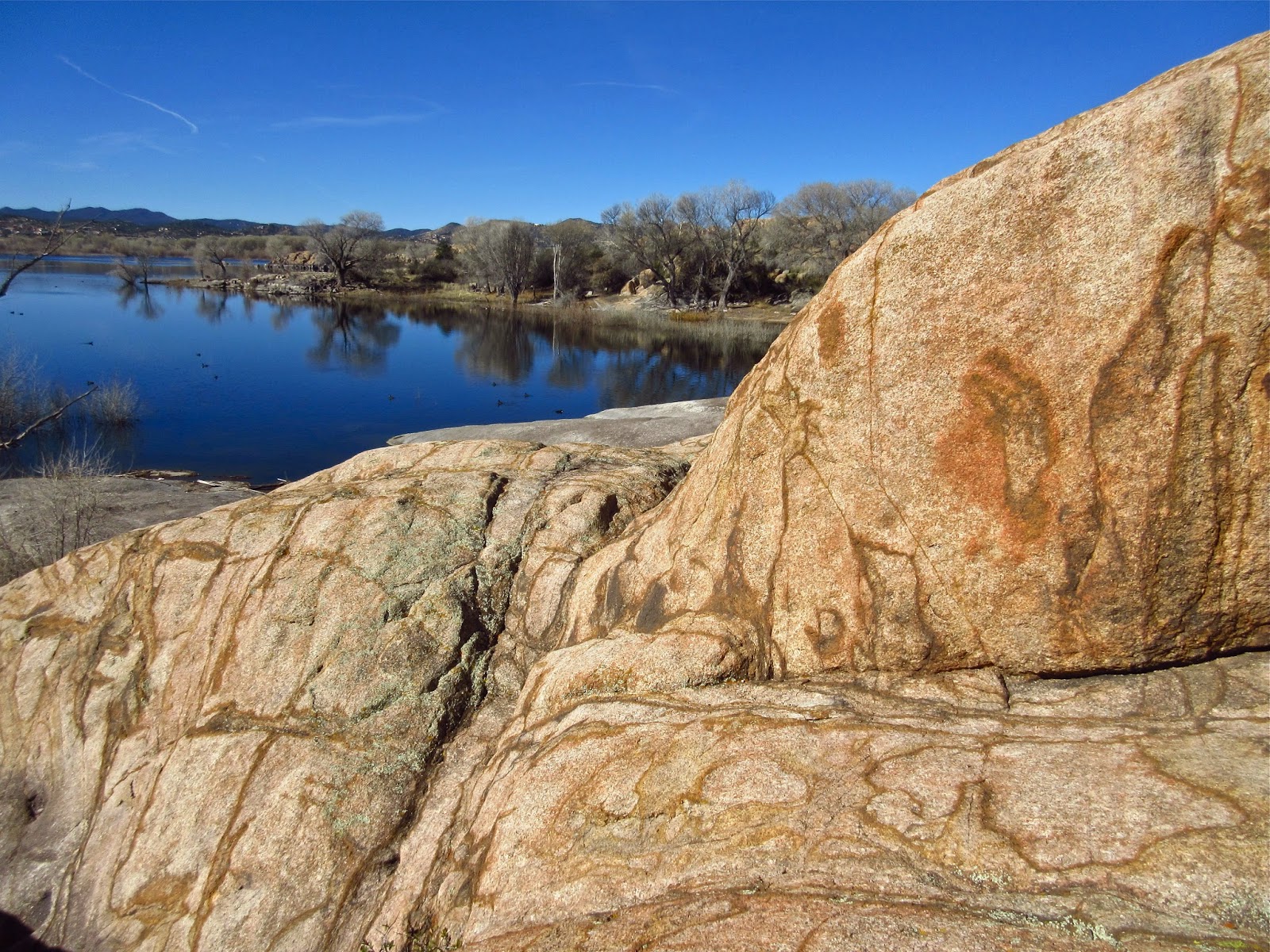