A Fish Out of Water in New York City 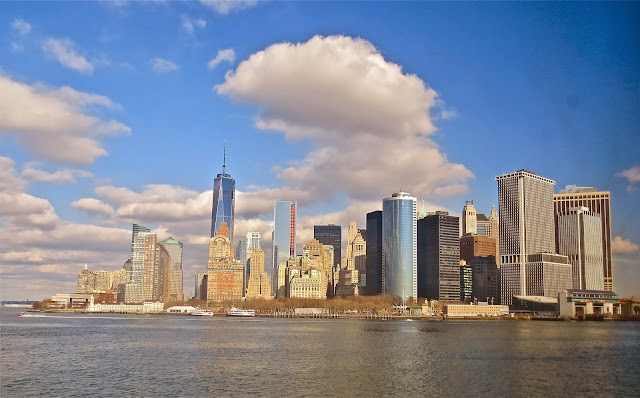 Where there are mountains, there are canyons—enchanting, seductive landscapes that both beguile and unnerve. New York City is mountainous—dazzling man made monoliths topped with radio steeples that cast long winter shadows across deep canyons, canyons every bit as deep as those found in Colorado. I was born a curious child and remain a curious man—a prerequisite for being a wanderer—and while I'm not drawn to the clamor and glitter of over-peopled cities, there is that one that begs exception. I am intrigued by oppositional landscapes and lifestyles, and who better to play the role of antagonist than the city of all cities, New York, with her determined, and oft misunderstood inhabitants.

Sermon on the Mount

Do not be fooled by impostors waving banners of "Adventurer" and "Wanderer," for there are false prophets about the blogosphere. A true wanderer should not single out only destinations of fun, familiarity and comfort. Only those willing to deny longing hearts, shorts, flip-flops, and embrace the bitter (cold) along with the sweet are worthy of the moniker.

Growth and enlightenment come at a cost; look for evidence of toil, sacrifice, and suffering, lest eyes and ears deceive. Recall the hardships of our forebears and see how we measure against their yardstick. Pitiful. One of Life's axioms is that wisdom, understanding, and growth are greatly accelerated by tribulation. So why do so many run from it? If we don't reach beyond the security of our own backyards, we profit little. It is in discomfort that we realize strengths, weaknesses, and limits. A life lived without challenge beyond Auto Pilot only scratches the surface of who we are, and renders few opportunities to realize insight, growth, and potential.

Preaching to the Choir
That said, New York City is not exactly "Everest." After all, nine million people call it "home." But in the eyes of a small town loner, where any assembly of more than ten people means there's either a fight, a wedding, or a funeral going down, well, it flares my claustrophobic side just thinking about being trapped in the Big Apple. That my worst phobia came true on a damp, cold, and windy Black Friday is proof positive that I do occasionally swallow my own "medicine."

From "Kansas" to Oz

Give me your tired, your poor
Your huddled masses yearning to breathe free
The wretched refuse of your teeming shore
Send these the homeless tempest-tost to me
I lift my lamp beside the golden door!

I couldn't remember Irving Berlin's lyrics beyond "Give me your tired, your poor…" but the short sentiment was sufficiently apropos given my whereabouts...riding the Staten Island Ferry from New Jersey to Manhattan. I literally began to shrink under a skyline scraped by so many towers. I thought for a moment it was a dream and whispered to no one commuter in particular, "Toto, I've a feeling we're not in Kansas anymore…"

Jonah and the Whale
The ferry cruised past Lady Liberty, a lovely patina green figurine that cut Jersey's skyline like a symbolic knife. She bore a crown of seven spikes representing the world's seven continents and seas, a tablet inscribed with the Roman numeral date of our hard-won Independence, and a torch...thrust 300 feet into the sky... representing a beacon of "Welcome" and symbolically illuminating the way to a freer and better life in America.

Then Ellis Island floated by, where fortunate able-bodied dreamers were welcomed, and the diseased turned back—destitute, near death, dreams shattered—to the life they had fled. Off the ferry's bow set a horizon spiked with scores of audacious skyscrapers, they grew to impossible heights upon our advance. I felt like Jonah, slipping into the gullet of the whale. Is this a dream? If not, how in the world did I get here, and why?

The "To Dos or Not to Dos" Leading up to Spending Black Friday in New York City
On what can only be described as a "furious itinerary," there was but one unplanned day: Black Friday, a day to stay home and out of harm's way. Several options were bandied about for that infamous day after Thanksgiving, one of them being "to go into The City." Traction and commitment for a NYC trip was mixed at best; even those in favor had moments of doubt. So "The City" in the days leading up to Black Friday was on again-off again, like some wobbly legged toddler who'd just discovered a light switch. At first mention I secretly knew it was something I had to do…if not now, when?

Having been to NYC several times, it only took Bobbie the better part of a second to count herself out. For the remaining "fence-riders" the "light switch" became a strobe…freakishly wired to time of day, blood alcohol levels, and abdominal distention. In the morning's post-coffee highs, we were all in...charged up and ready to take on The City, Black Friday and all. But as the day wore on, between assorted Champagne Buffets, IPA's, and Baileys Irish Creams—all great solvents of resolve—our Jury was hopelessly hung by mid-afternoons...overstuffed people sequestered in a room full of overstuffed couches, dulled by indulgence. In a fleeting moment of near sobriety near the end of Thanksgiving day, there was a renewed consensus. "Let's do it."

First Impressions
We don't know where our first impressions come from or precisely what they mean, so we don't always appreciate their fragility.
Malcolm Gladwell


Engines groaned and shuddered as our ferry maneuvered into its docking slip. Passengers disgorged in waves, briefly flooding the terminal, then melting into an ocean of people. A damp, cold wind greeted grim faces: Welcome to winter in Manhattan. I bundled up against light flurries of snow…whirling, but never landing, really. The Ferry Terminal was like a mall, complete with its own Food Court. The presence of Security and Police Officers was palpable. Drug sniffing dogs nosed the air. It gave me a partial sense of relief, that I was not going to be immediate script fodder for some future CSI TV show.

On our way to the subway it struck me that many emigrants coming to America via New York City never get beyond Manhattan...from turbaned taxi cab drivers, demonstratively gesturing with hands and arms, to a plethora of languages emanating from shoulder to shoulder pedestrians. The "melting pot" is not necessarily a "melding pot." There are cities within this city where English is a second or third language. But assimilation is not what NYC is about; NYC is about diversity, and that is the foundation of its magnetism.  "Come to America," yes, but know that the waiting line circles the globe. 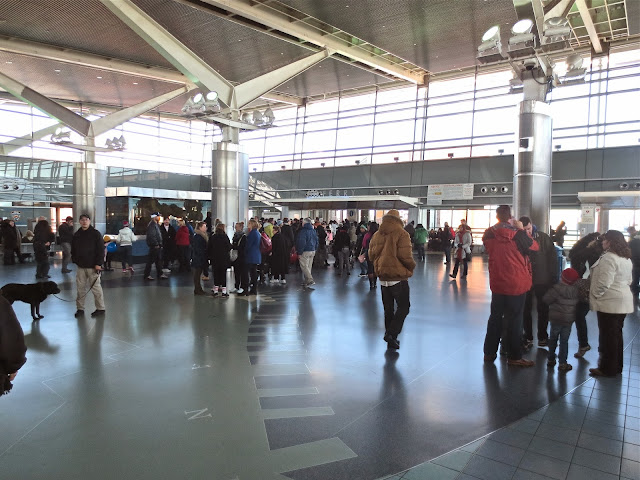 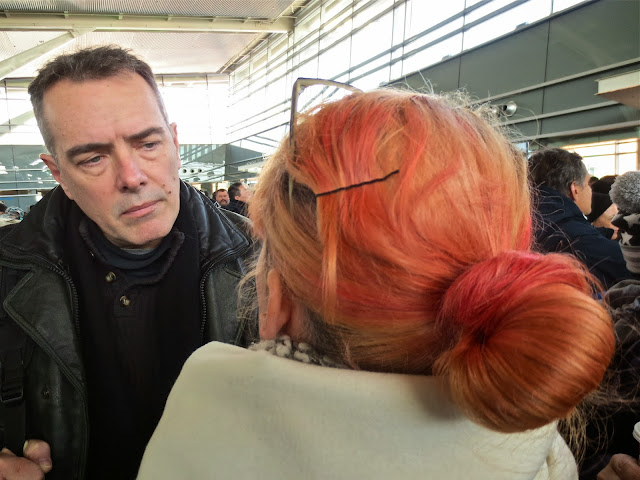 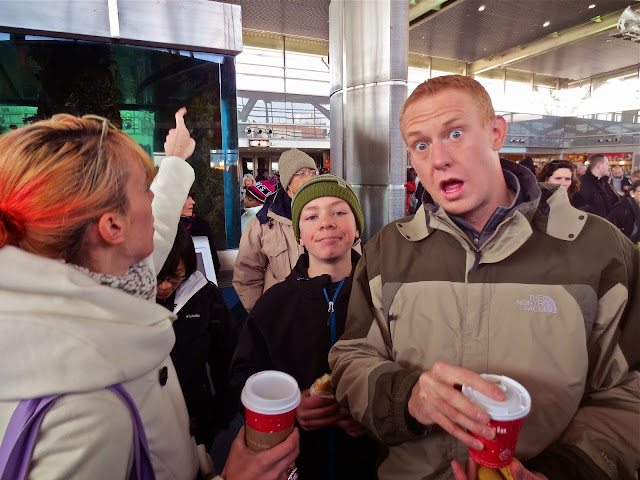 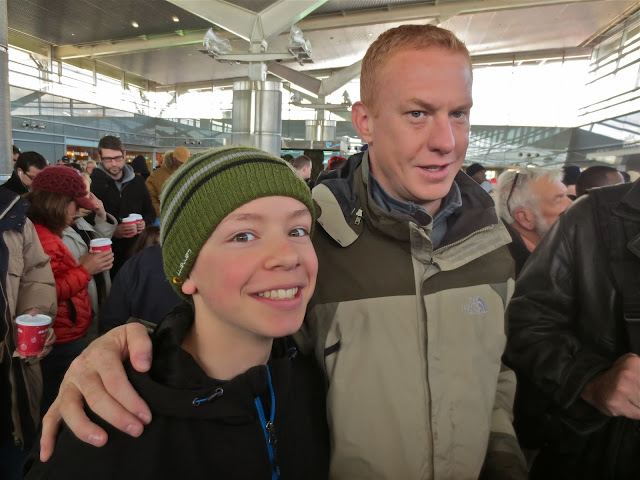 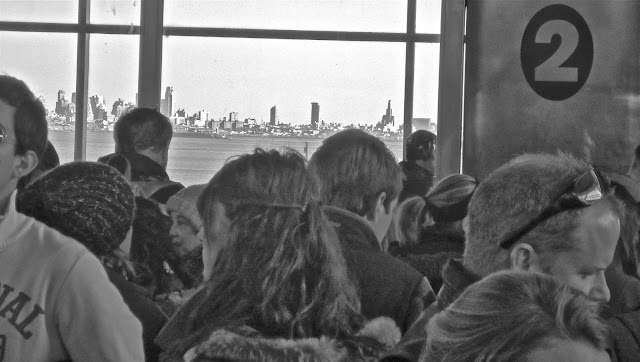 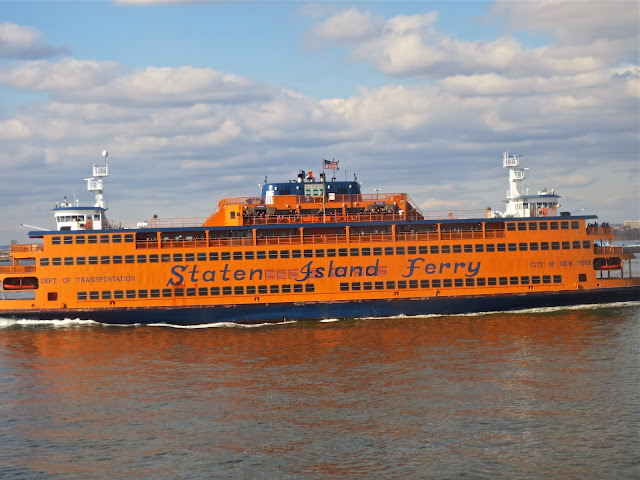 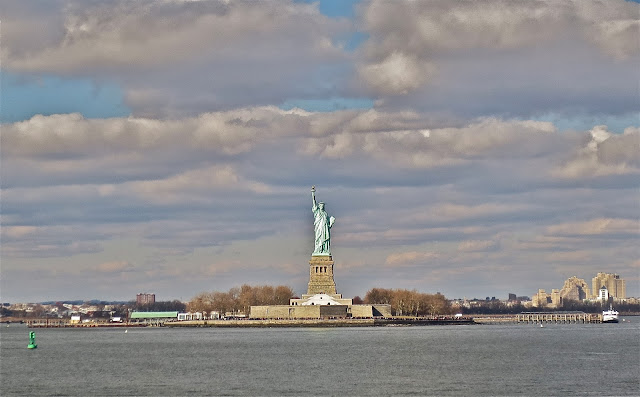 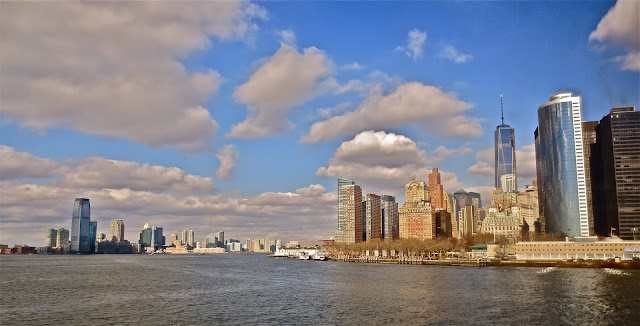 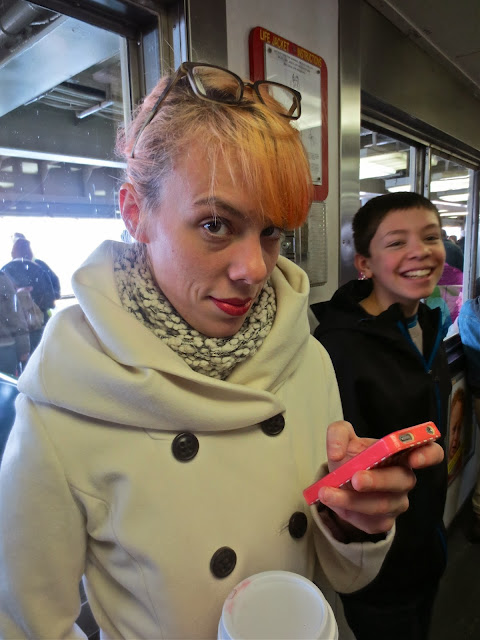 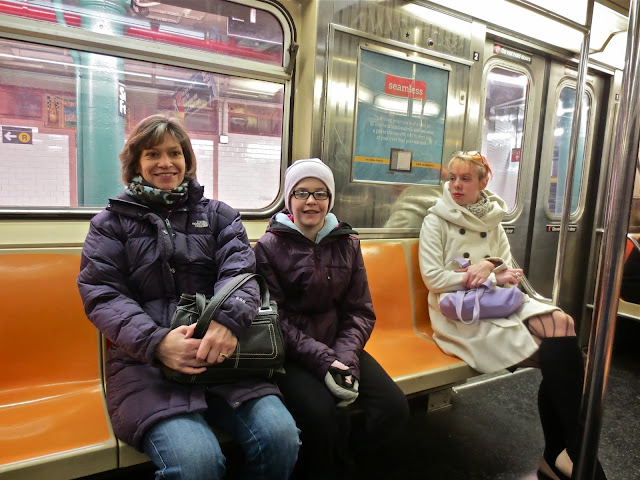 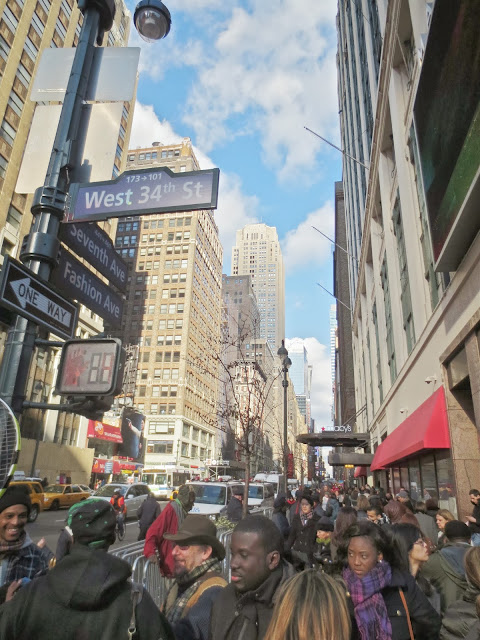 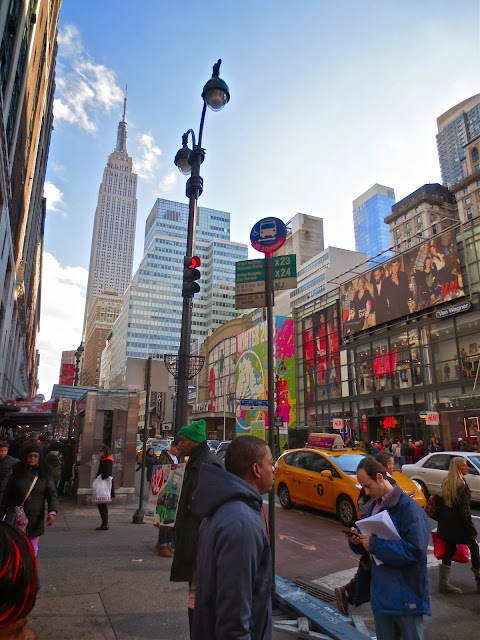 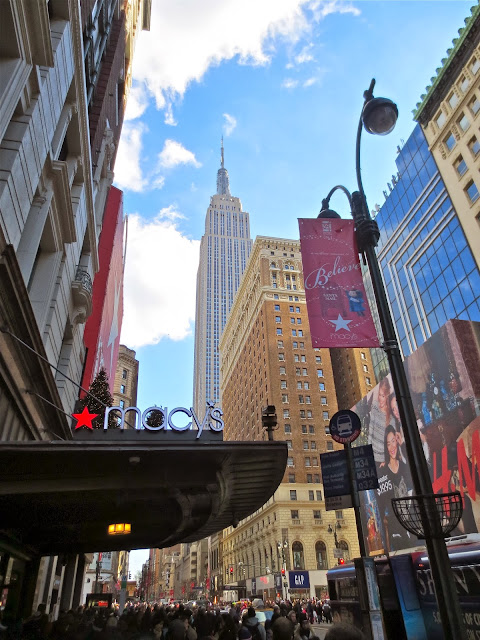 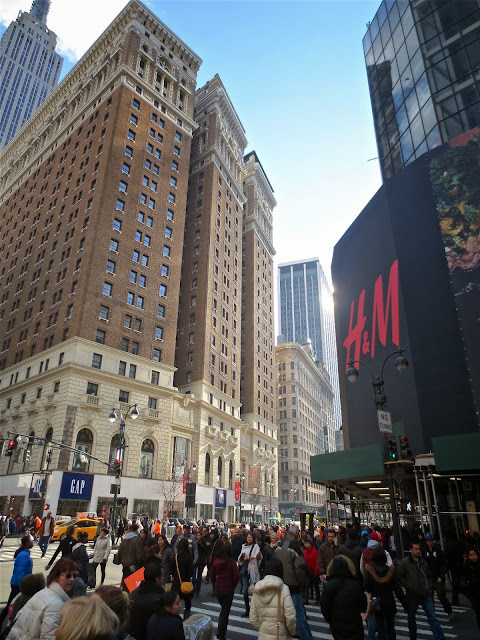 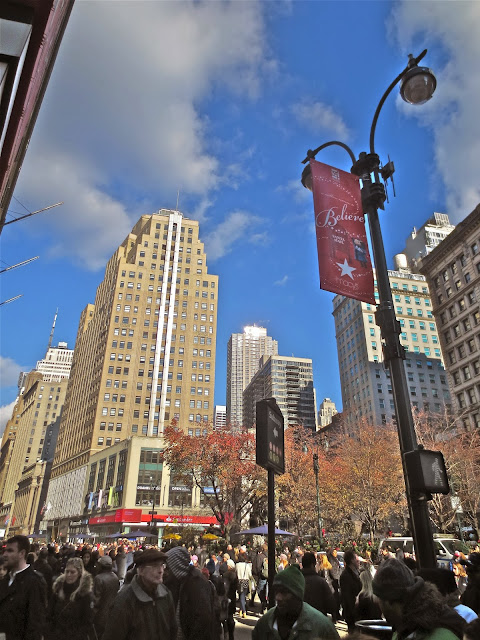 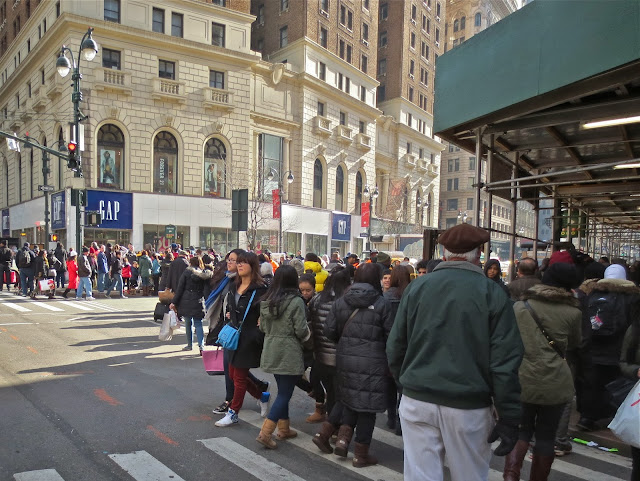 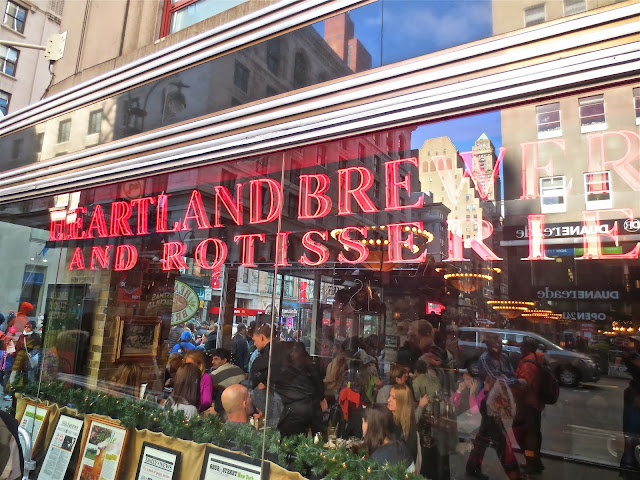 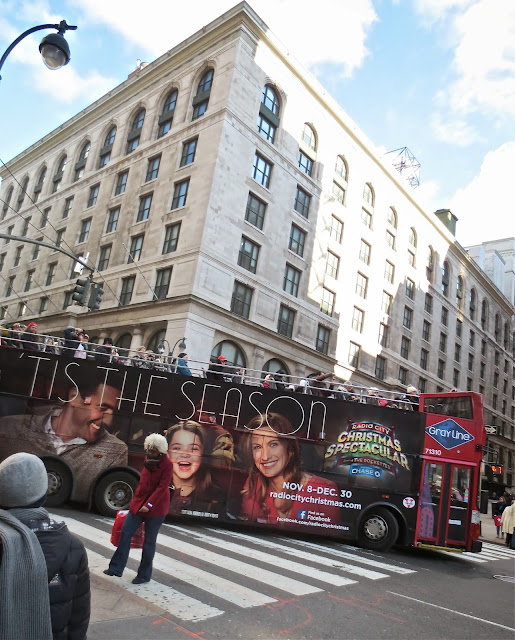