Winding Down Utah With Andre And Rose 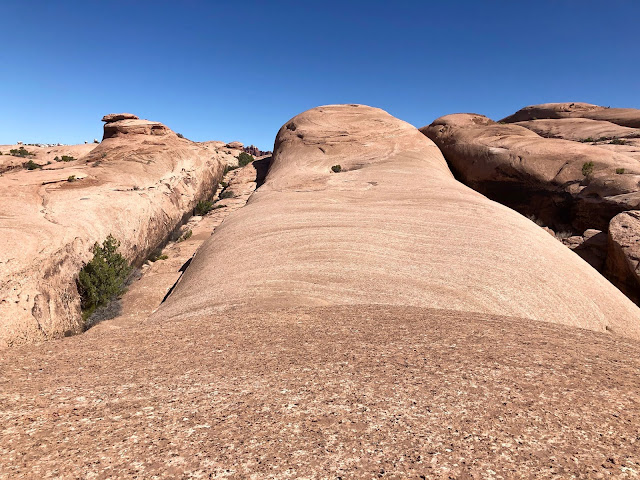 Sometimes, you just need a break in a beautiful place, alone, to figure everything out.
Except for the demure glow of a waxing crescent moon, my boondock camp is miles and miles from any source of light pollution. It both startles and boggles the mind, to step outside on such clear desert nights in remote places. What an opportunity to gaze and reflect on our infinite Universe, with billions upon billions of distant suns twinkling away. I try to imagine what's out there that I can't see.

The above photo is one of numerous "gateways" to Anniversary Arch. We've come to call them "loaves" because, laying side by side as they do, they resemble loaves of bread, with an odd assortment of deformed rolls scattered about just for fun. Ahh Utah. Mine eyes always feasting, yet never sated. 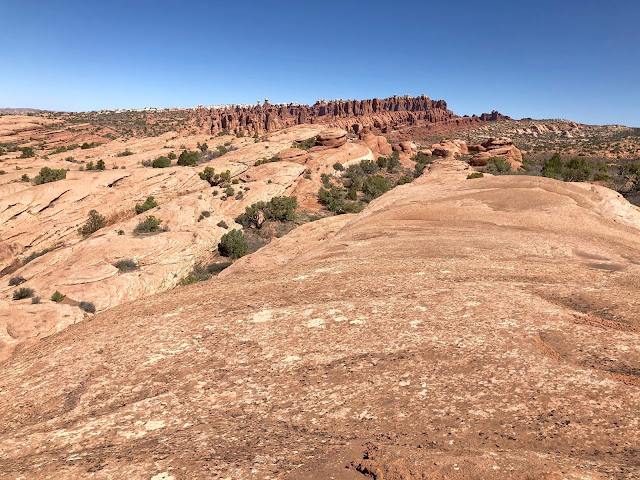 Smooth and rounded as the "loaves" are, they lie in stark contradiction to more upright and angular geologic relics only a short distance beyond. Be it statuesque sculptures or loaves of bread, sandstone certainly leaves a trail of Natural Art in it's erosional wake.
With Andre and Rose now in camp and ready for exploration, I decide to take them on a grand tour of some of our favorite views and sites. It was a long 9 plus mile day, but they seemed to enjoy the sights.
We "loaf-hopped" a circuitous route as I tried to retrace Bobbie and I's route to Anniversary Arch. It's remarkable how all the loaves look the same. Add to that steep and deep seams of separation too treacherous to navigate, and it makes a "guide" wish he would have had his Gaia App going the last time.
Anniversary Arch has eluded Bobbie, Pal Chris and I for several years, mainly because the location pin on Gaia is in the wrong place. After exhaustive searches in all the wrong places, Bobbie and I only discovered the actual location a couple of weeks ago. The "Arch," it is said, got its name when a married couple decided to go exploring on their anniversary and stumbled across two small arches hidden amid a grouping of red rock formations. Since there are two arches, however, the name should be pluralized.
Below are a few photos from a couple weeks ago when Bobbie and I finally zeroed in on Anniversary Arch(es). 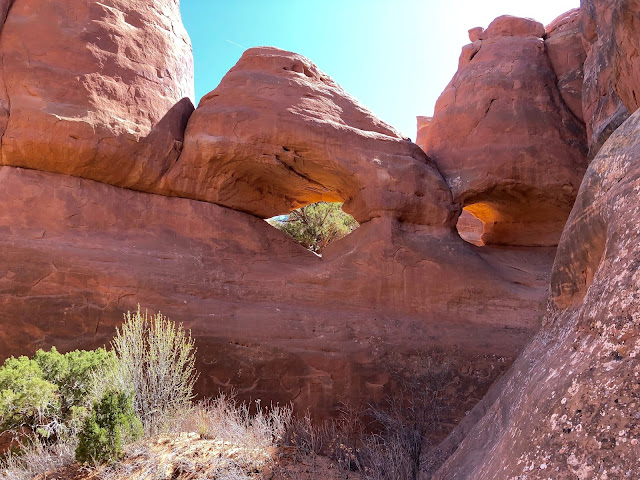 The walls below the arches were near vertical, so there was no way to scramble up. Bobbie and I hiked around to the back side for a ground level access. They are small, but worth seeking out. 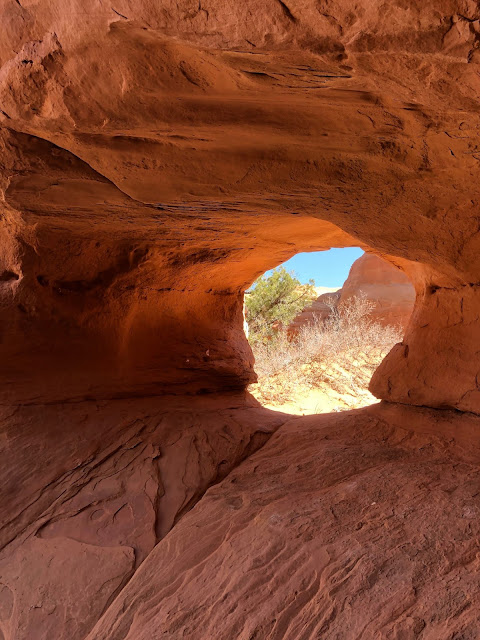 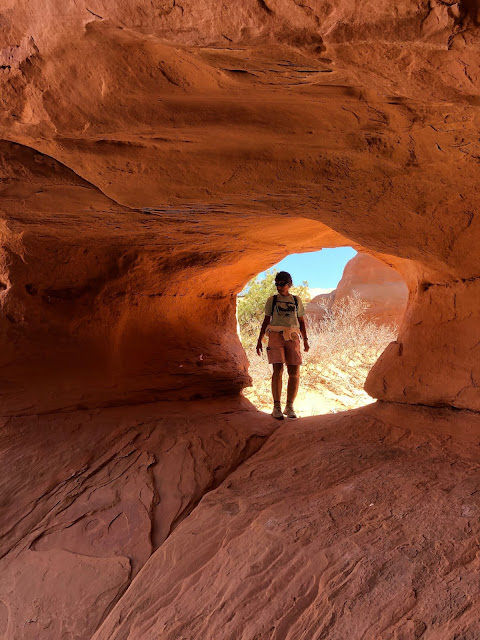 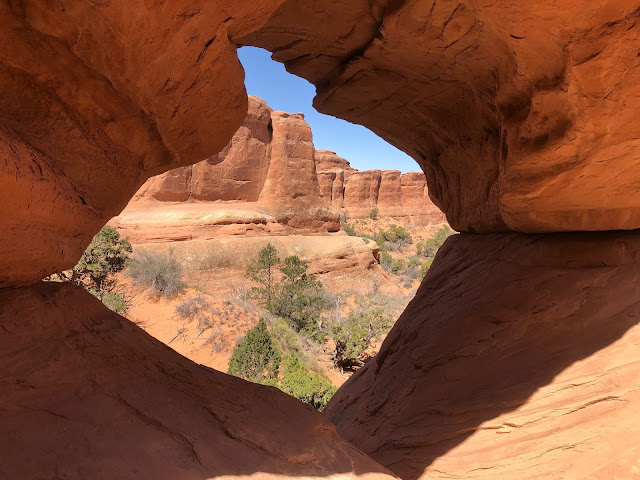 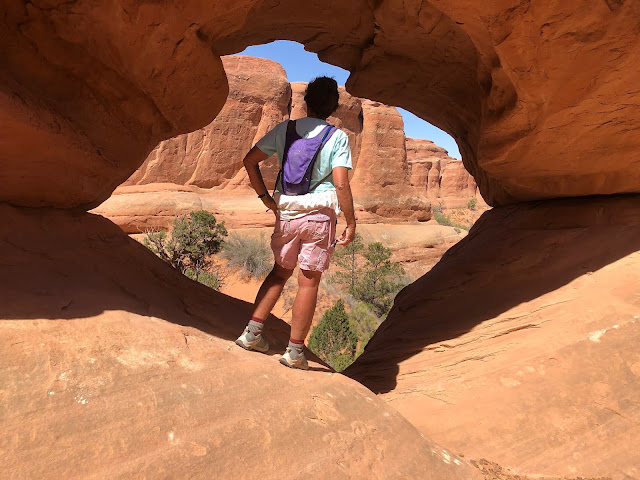 Bobbie left to go back home, so it was up to me to guided Andre and Rose to Anniversary Arch. Let's just leave it a lesson in cliff-outs and backtracking. Always interesting when I'm guiding a hike, for sure. 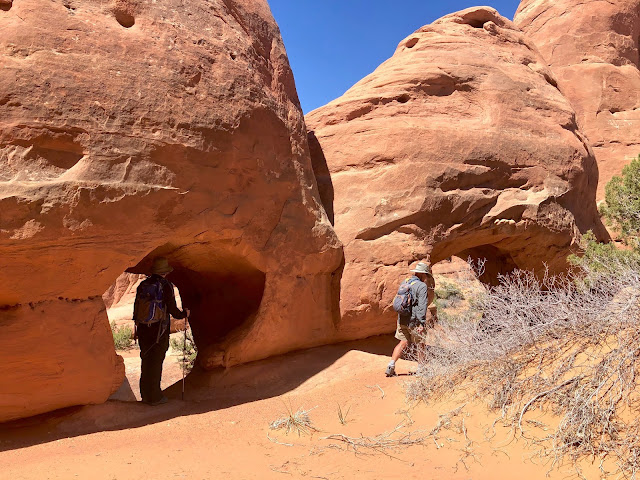 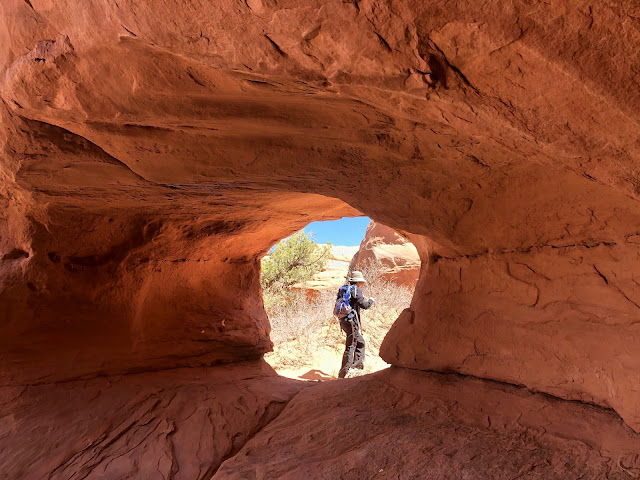 Then it was on to more scenic relief...Balanced Rock and Marching Men, then on to Tower Arch. 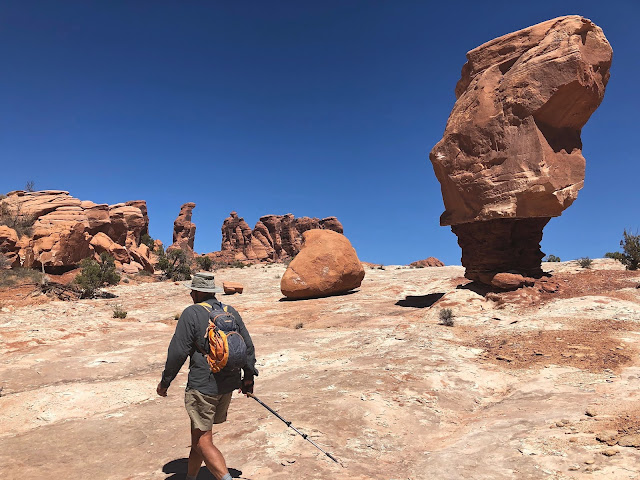 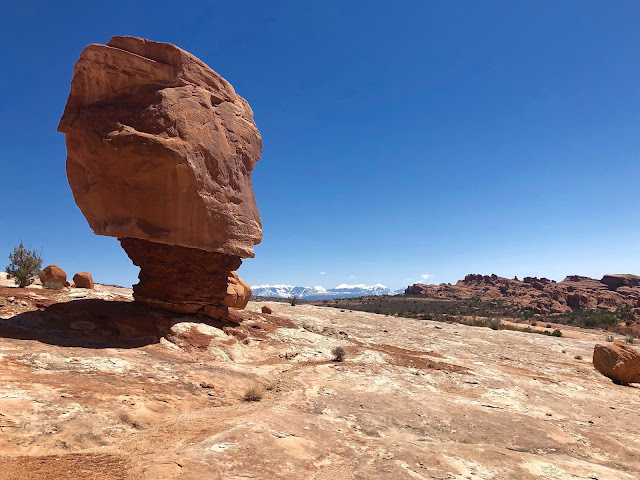 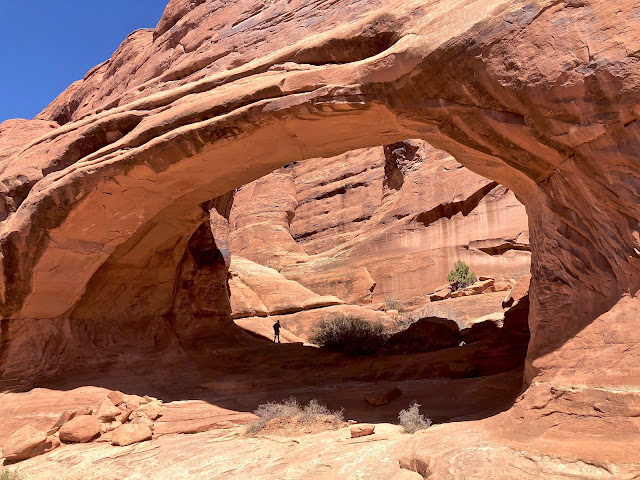 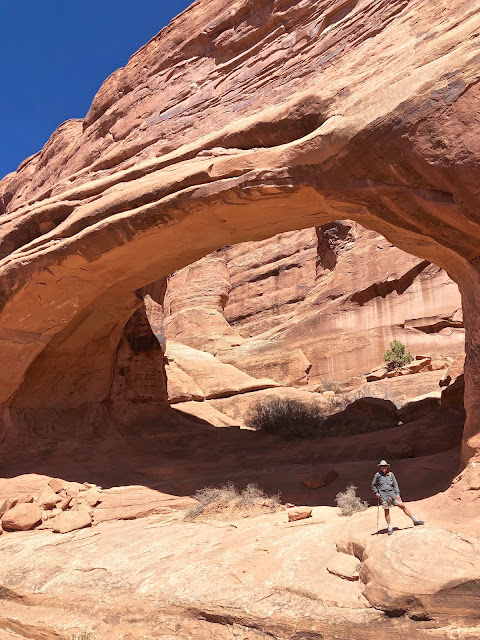 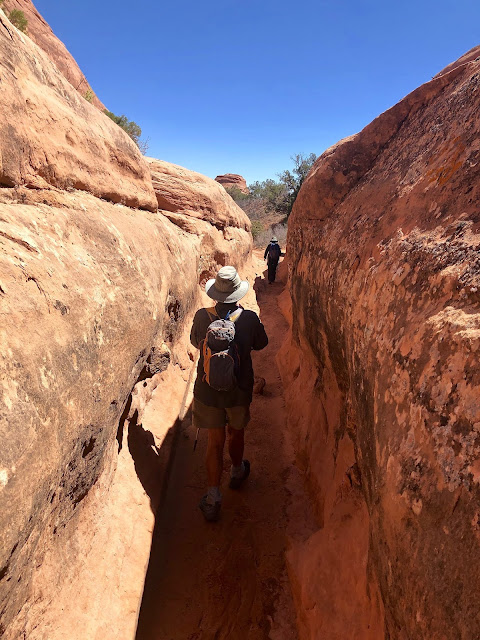 Time to head home, hopefully a straighter line going back.
Last but not the least of photos is a Klondike Hills bike ride with Andre... 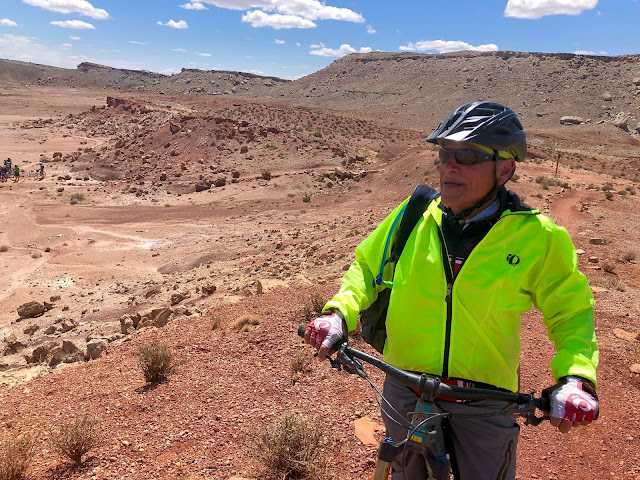 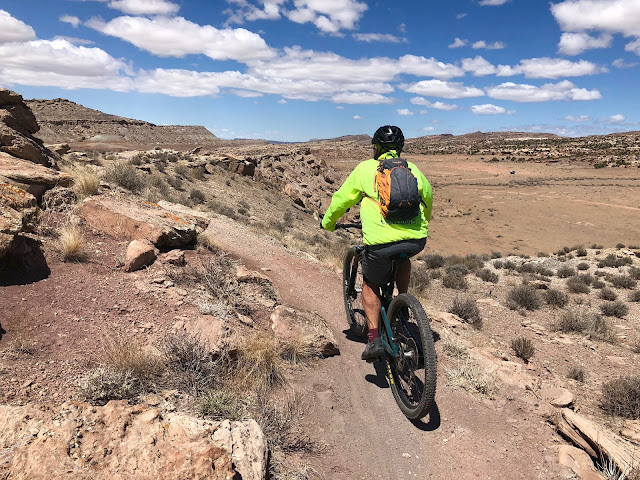 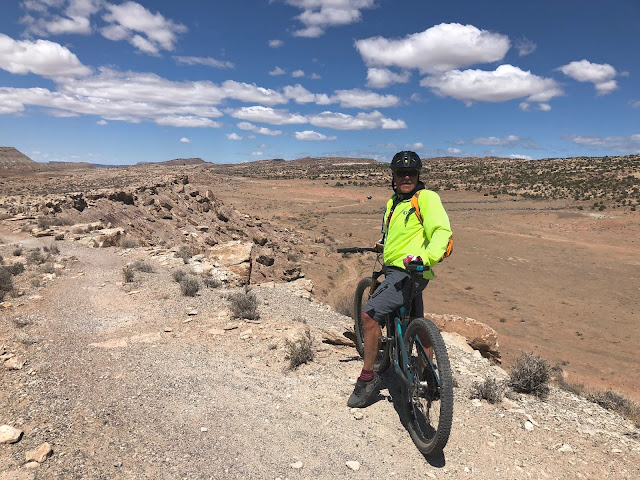 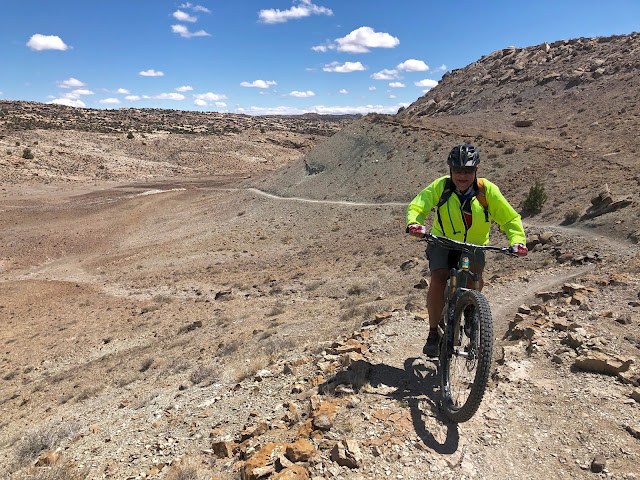 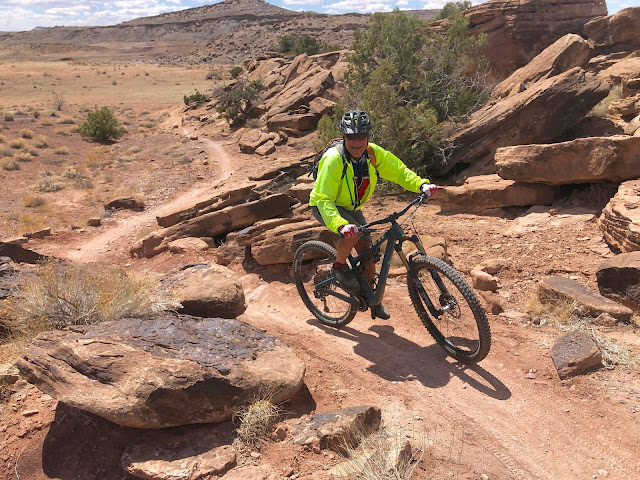 Andre's smile says it all... 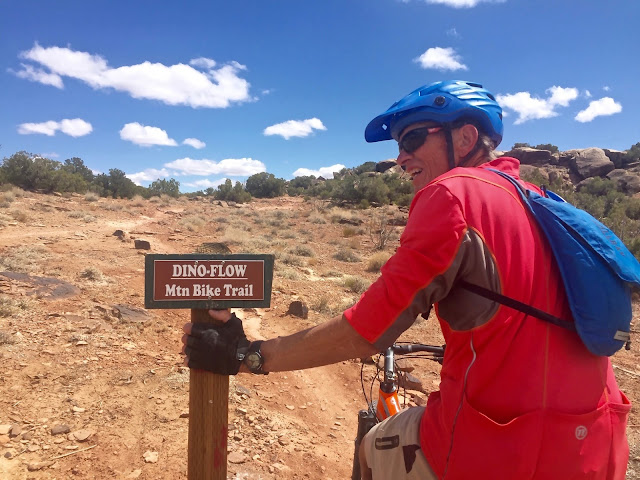 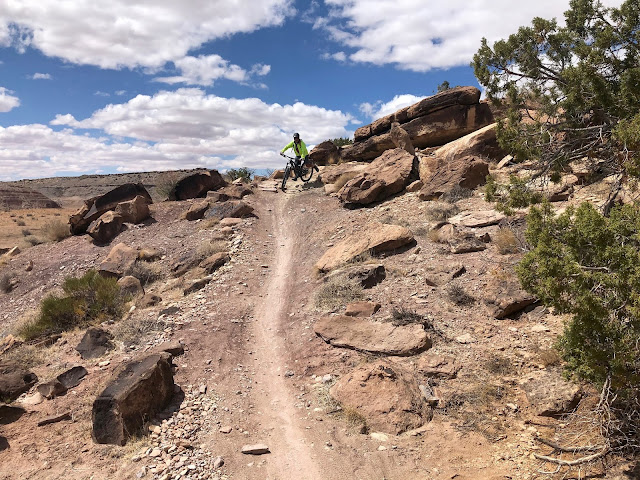 All good things eventually come to and end.  Saturday, I'll trade Camp Klondike's fantasy for the reality of Lovely Ouray, where it's still spitting snow. Thus, emotions run amuck as my time in Eastern Utah winds down. On one hand, I'm sad to leave. On the other, I'm ready to reunite with Bobbie, take a l-o-n-g hot shower, and sprawl out in a kingsize bed in a house that doesn't rock in the wind.

Though it will be a relief to escape the confines and minor irritants that come with living in an Rv for months on end, you can damn well bet your Social Security check that I'll be chomping at the bit to leave come early October.

I've managed to dodge most of "mud season" back home (though it still snows...and will till June). Truth is, the weather hasn't been what I'd call "normal" for a typical spring in Eastern Utah. With temps running cooler and windier than normal, it made for some chilly nights (below 30 degrees) for this Arid-zona warm-blooded Mammal. It was rare to have a day without wind. Then several days of rain, followed by several days of temps approaching 90 degrees, well, I didn't get to ride the bike as much as I hoped. I know. I'd complain if you hung me with a new rope. All in all, though, I'm enjoying our Rv winter routine. We are still discovering "new dots," and enjoying a few old ones as well. As it says on my ball cap: Life Is Good.

Most travelers hit the road in search of unfamiliarity and new discoveries...you know, new territory. As for me, well, I seem to grow more attached to the "oldies," the "greatest hits, if you will. "Postcard" places with trails to re-explore on bike and boot is just fine, kinda like that old favorite song that reminds you of a long lost summer of love—holding hands and locking eyes while Frankie Valli trills "Rag Doll" on some soda fountain jukebox.

I'd love to say, "I've figured everything out." But, to be honest, I'm not sure it's possible to do that nowadays. Life is not as simple as it used to be once upon a long time ago, back when "change" came in palatable bites spread over decades.

Not so much today. We now live in a dynamic and fluid world where change occurs minute to minute, if not second to second. A place where the best one can hope for is to keep up.

Time has a way of slipping away from those who must live in a frantic world (preaching to the "choir," here). One day you wake up and notice your "candle" is getting pretty short, and there are but a few grains of sand left above the hourglass's orifice. In view of my geezer predicament, my goal for the next decade (should I be so lucky to survive it) is to figure out how to slow time down without wasting one precious second.

We shall not cease from exploration

And the end of all our exploring

Will be to arrive where we started

Peace Out, people. Time to squeeze in a few more magical miles on Klondike's maze of trails before packing up for the home run. Leave a light on for me BJ...