Postcards From The Edge: A Bike To A Hike-Climb-Stroll Atop Snowcapped Sandstone 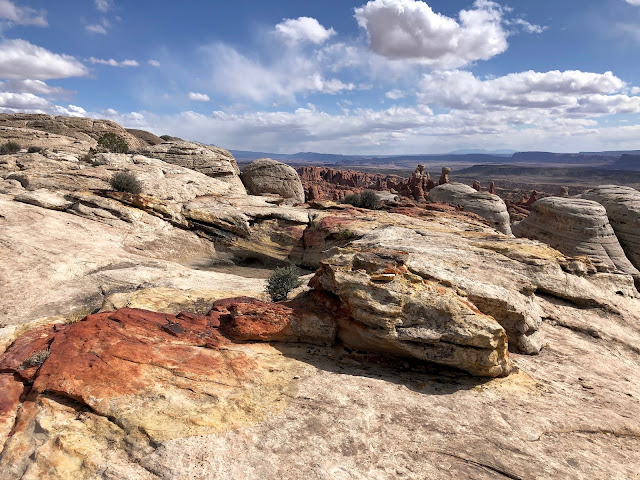 Look deep into nature, and then you will understand everything better.  Albert Einstein

I would like to nominate Utah as the 8th Wonder of the Natural World. Though I've not traveled the world, I have yet to hear about or see for myself a broader range of topographical diversity than in Utah. Better yet, in less than a day's drive you can travel border to border...north to south or east to west.

On winter days, you can snow ski mountains in the morning and mountain bike deserts in the afternoon. Similar to Arizona, you can typically find a temperature that suits your clothes simply by moving up or down in elevation. I'm so thankful that Utah is our neighbor, for it perfectly compliments Colorado. In fact, If you don't have enough money for world travel, it's hard to beat any one of the Four Corner States.

This post is the first of a two-part story. In today's post Bobbie and I bike about 8 miles from camp to a foot trail that leads up to "The Whitecaps." "Whitecaps" refers to a white cap layer of sandstone that rests on top of lower and predominantly red rock. The whitecaps enables a bird's-eye-view vantage point from which human eyes can rest on unique-bordering-on cartoonish landscapes that defy description. Thus, I'll be using photographs as a supplement. If you like "chaos," you'll love this enchanting and mystical fairyland that resembles something Walt Disney on LSD might have dreamed up. In the next post Bobbie and I will attempt finding a route through and out of the "chaotic maze" that rambles below the whitecaps. Be sure to check back for that post as it will follow this one.

Bobbie and I are boondocked 3 rolling-dirt-road miles from Klondike's southern trailhead, a mountain bike Mecca that snuggles up to Arches National Park. From the Klondike Trailhead it's another 5 uphill mile grind—the kind where you make life long friends with Low Gear—to the whitecaps. You'll know you are there when you get to a fence with a gate and a nearby bike rack. A sign on the fence announces that you are entering Arches Natural Park, no bikes and no motors allowed.

We shoved our front tires into the otherwise empty rack, pleased that we, for a while, anyway, might have the Whitecaps all to ourselves.

A half-mile hike spit us out on rolling slabs of pocked white sandstone, where cairns marked the route forward. Soon we approached a series finger-like peninsulas jutting out into a red rock abyss of fins, monoliths and a collection of house-sized boulders scattered about the red desert floor. I don't recall ever seeing boulders that big, big enough, I imagined, to peg seismographs three states distant as they slammed to earth.

We walked several of the whitecap peninsulas out to their respective cliff edges, each with deep crevasses free-falling away on either side. It sweated palms and shot tingles up and down my spine. It may have induced a brief spell incontinence, too (sigh).

A couple years ago (egged on by our intrepid explorer pal, Chris) we managed to scramble/boulder/climb out onto the outermost knobby ridge reachable without the use of ropes. Perched on a distant cliff's edge we earned an unsurpassed view of the maze-like chaos far below our boot-tips. Oh to have a wing-suit...and the balls to use it.

As with the last time with Pal Chris, Bobbie and I were downright giddy with our collective Marco Polo spirit of exploration after having butt-scooted, rock leaped and rock climbed our way to glory. With adrenaline slowly draining from our blood, we sat down to soak in the sun and view...studying every nook and cranny in search of a route through the fairyland below. 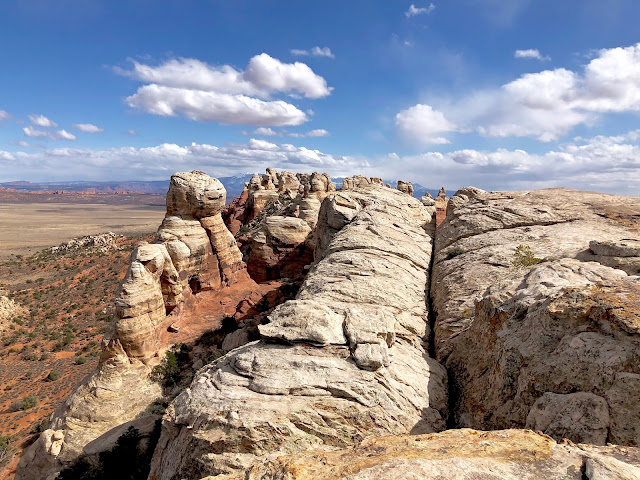 Only when the time came to head back to our bikes and camp did it occur to us that the reverse route would have us facing down a couple of heady drop-gaps...places that we used to jump from must now be down-climbed. But hey, it beats the alternative. 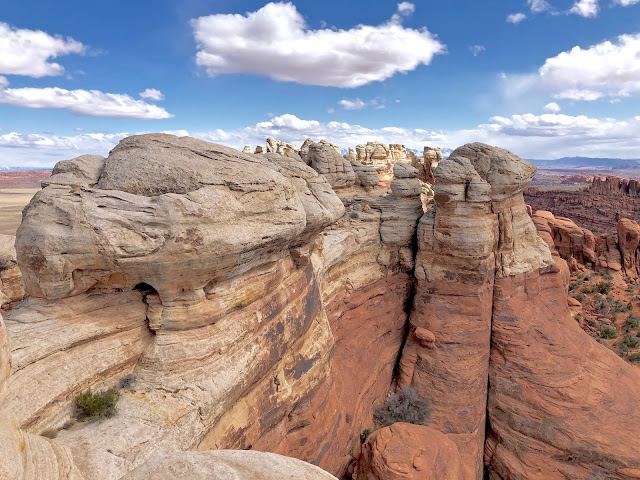 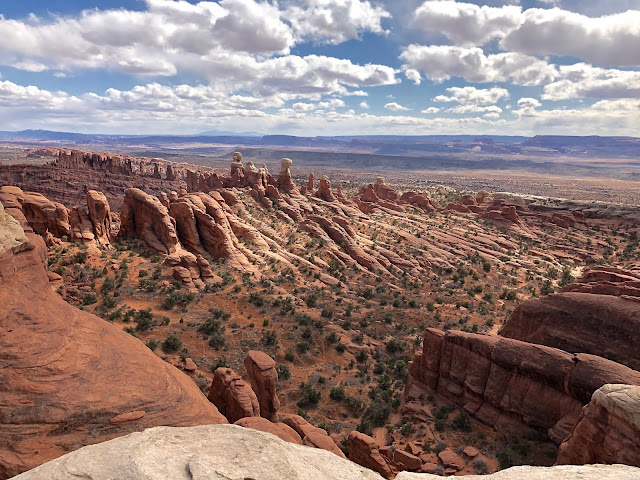 Take note and study the maze of fins and bobbleheads in the above photo. (HINT: As always, a click or double click on any photo will take you to an album view, where resolution and detail are much higher than on the blog's post pages. If you are not doing this you are missing out on a far richer viewing experience than on can be had on regular post pages).

Though not visible in this photo, way, way down between and beneath the two main "bobbleheads" is Tower Arch. Tower Arch is within hiking distance of our camp and a "must do" every year. We need to go through and beyond Tower Arch to get to the "good stuff."

Ascending the Whitecaps the first time allowed us to gain perspective on the chaos below. It didn't take long for questions to take shape in our minds. What if we could navigate a corridor route, up through Tower Arch and beyond through the groves of massive bobbleheads and fins? What if we could find a route through the maze to the drainage we (hoped) could be used to "exit?" I must have spent hours on Google Earth, researching possible routes behind and beyond Tower Arch. It was tedious at best, given our low boondock bandwidth :(.

Peace out, people. Stay tuned for Part II: Where there's will, there's a way out.
Meanwhile, guess who showed up in camp???
Mark
Posted by Box Canyon Blog.com at 8:04 AM