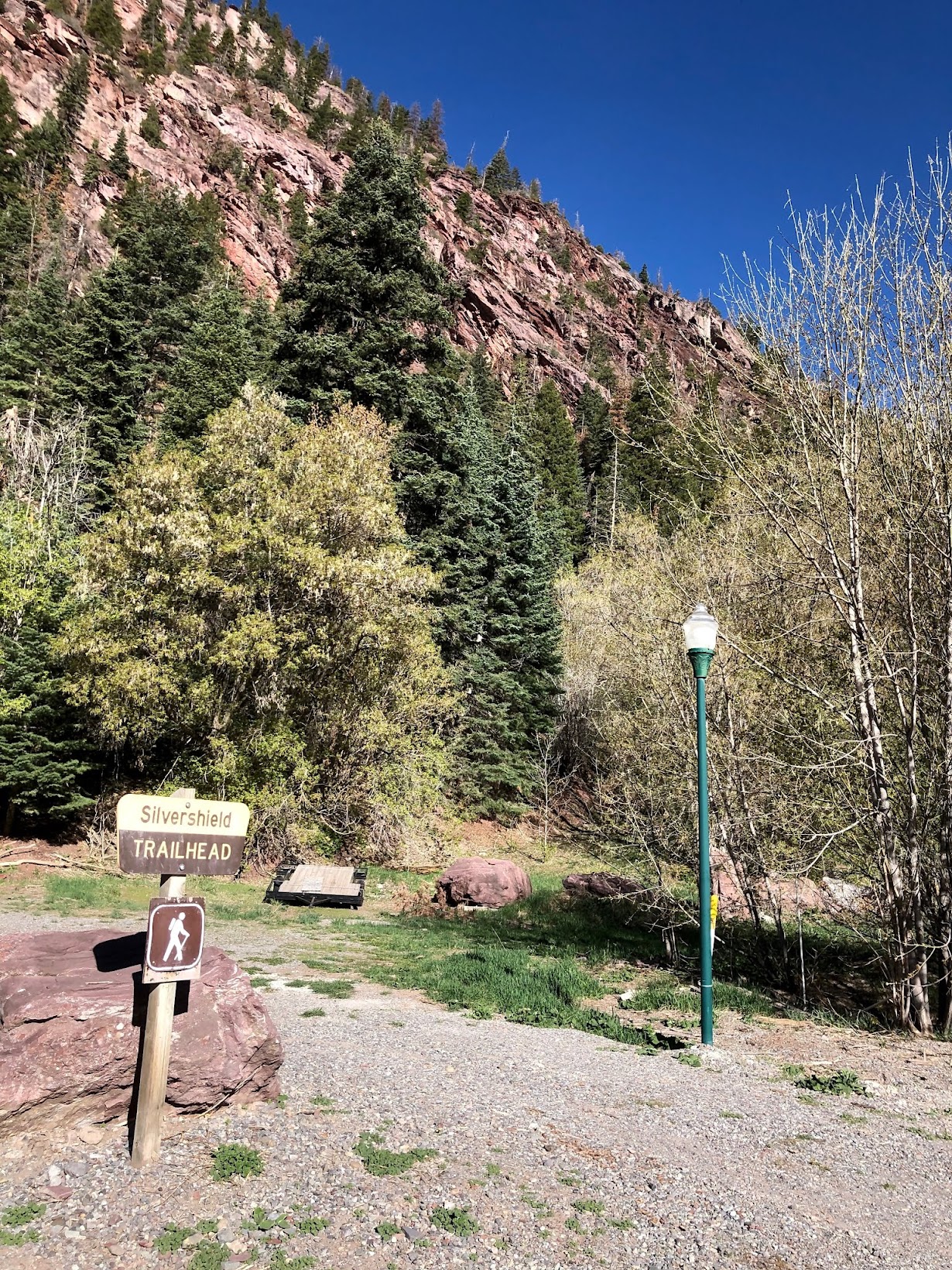 A little down this Saturday, especially after reading a NY Times article this morning that suggested we might be living with the Virus for years, as it comes and goes in waves until we either develop "herd immunity" or a vaccine comes to our rescue. Though the Virus has yet to greatly affect our lives here in "Tiny Town"—we are doing pretty much everything we normally did pre-Virus, outdoor things like hiking, biking, exploring, etc. etc.. However! I am beginning to wonder if this "social separation" and mask thing is going be part of our new normal, at least for seniors, anyway. I must say: Of all the accommodations I've surrendered to this fucking pandemic, it is the handshake/hug exchange I miss the most.
I know, I know: It could be worse...

Speaking of doing the outdoor thing, Bobbie, along with hiking pals Ruthie and Bridget, opted to do the Silvershield/Oak Creek loop a few days back...a 7-ish mile trek with just shy of 2 thousand feet of elevation gain/loss.

Since Silvershield  intersects Twin Peaks Trail, I suggested we give it a go to trying for a summit...if the snow gods are kind. 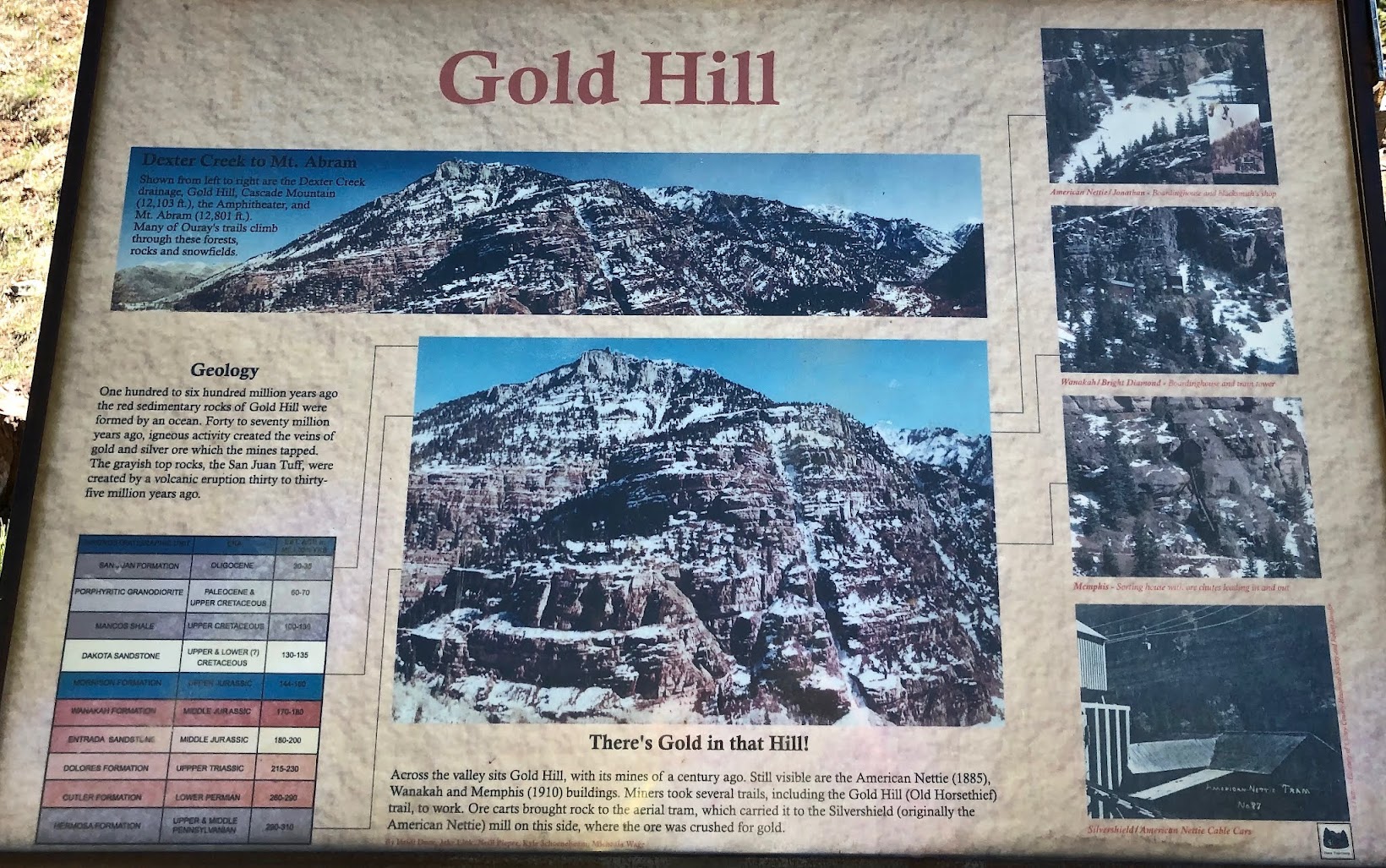 Below, a few buildings from the 1880's still stand upright on precarious perches...spiting in the face of time and weather and gravity. 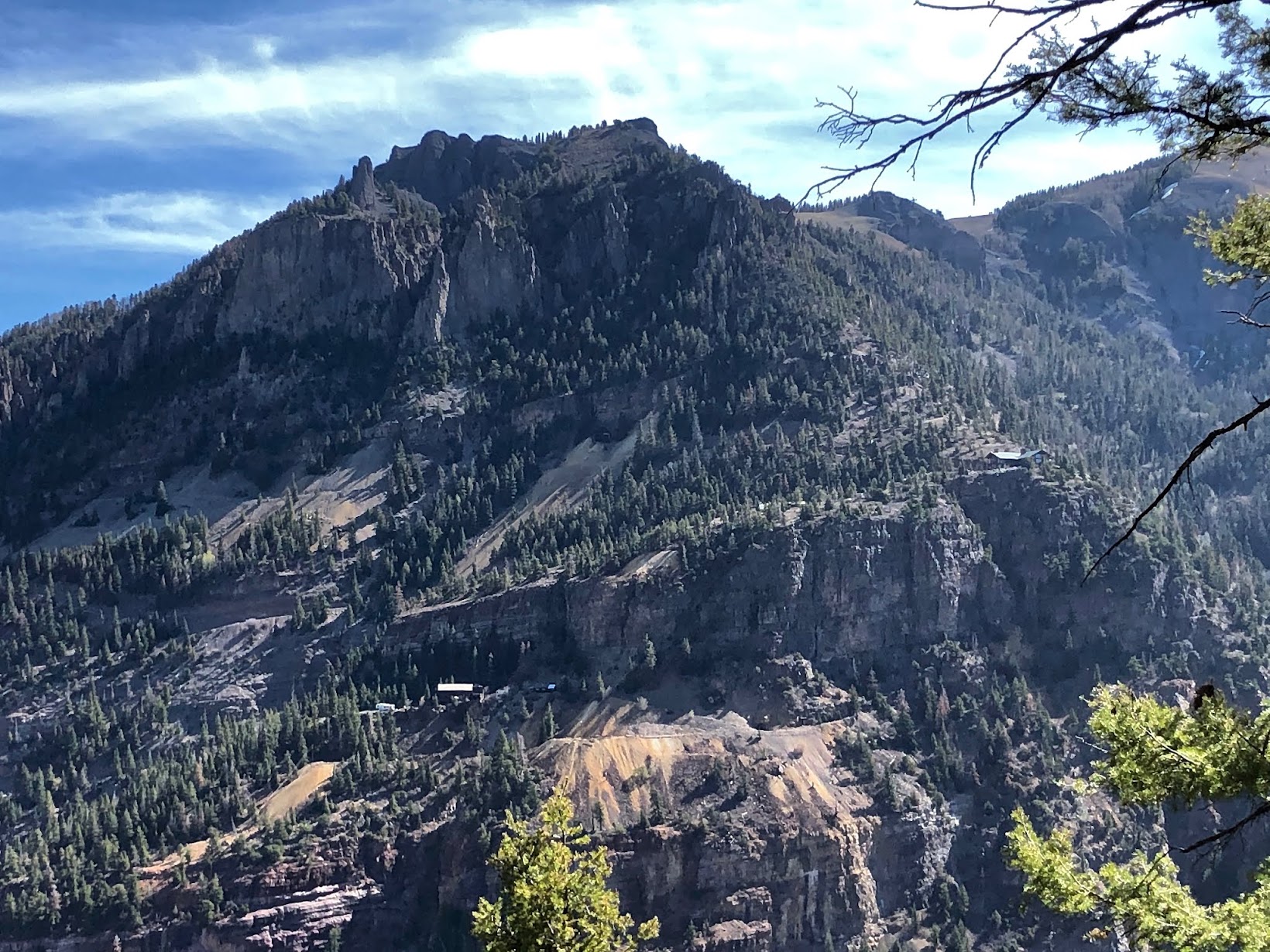 Above the mining camp is the Ridge to the Bridge of Heaven, a hike we made last week. 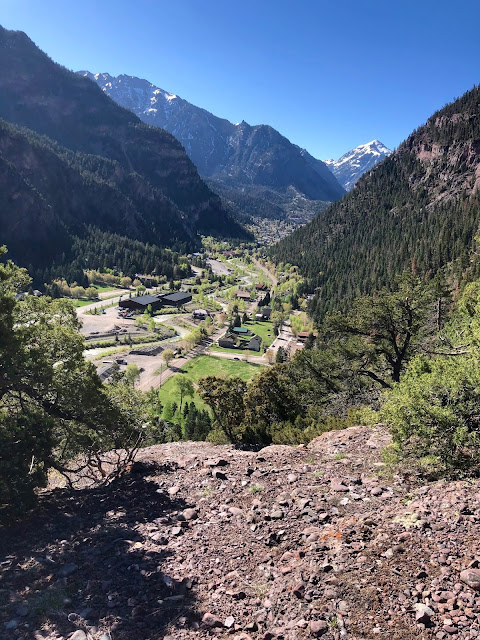 As with most trails in "La Crevice," Silvershield ranges from ambitious to aggressive. There's little to no escape from cardio workouts around Lovely Ouray. The payoff is Views that offer endless perspectives.

Speaking of "perspectives," take note of the neighborhood in the above photo. We will soon be looking at it from an entirely different perspective...as in, straight down. 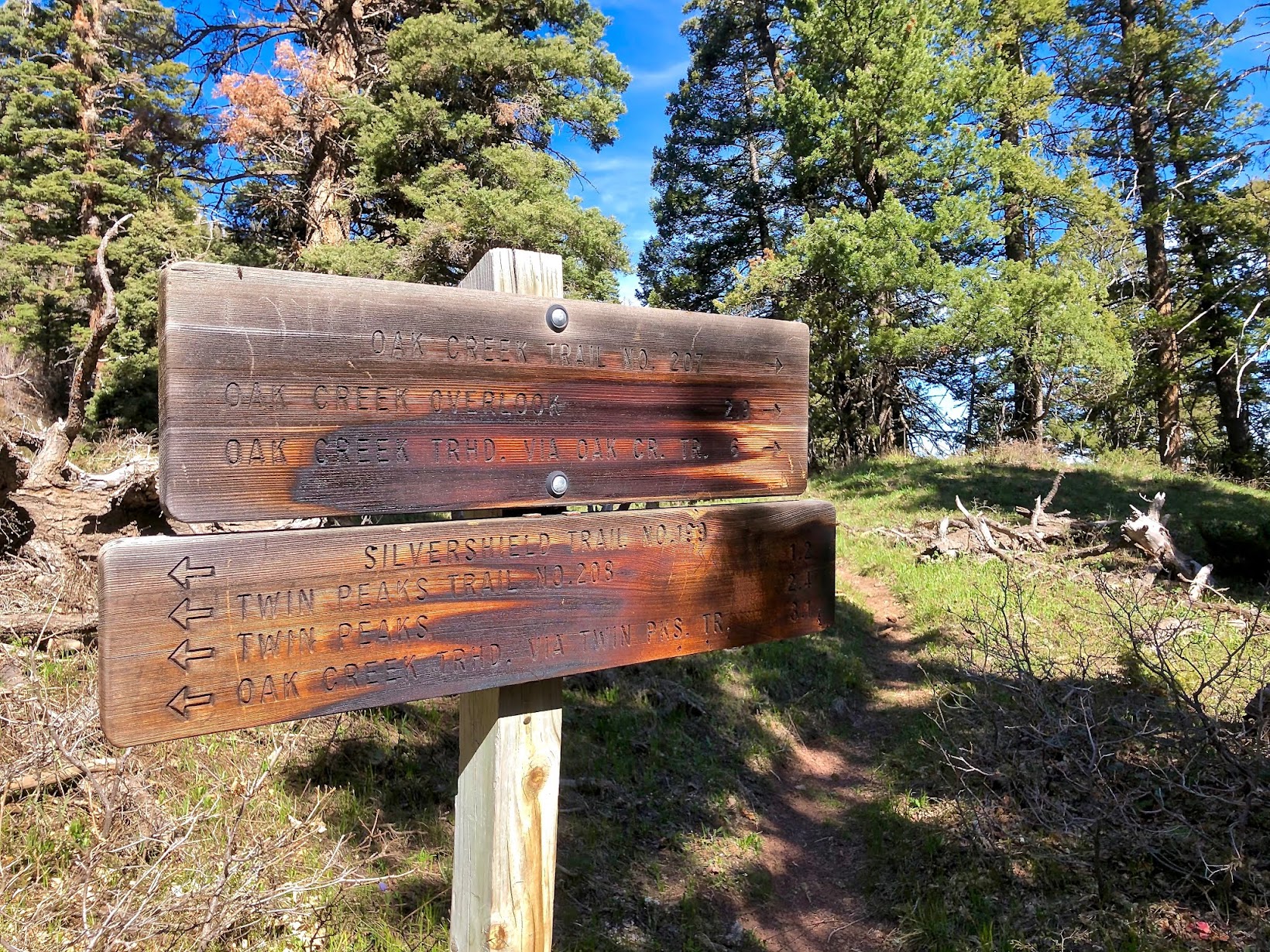 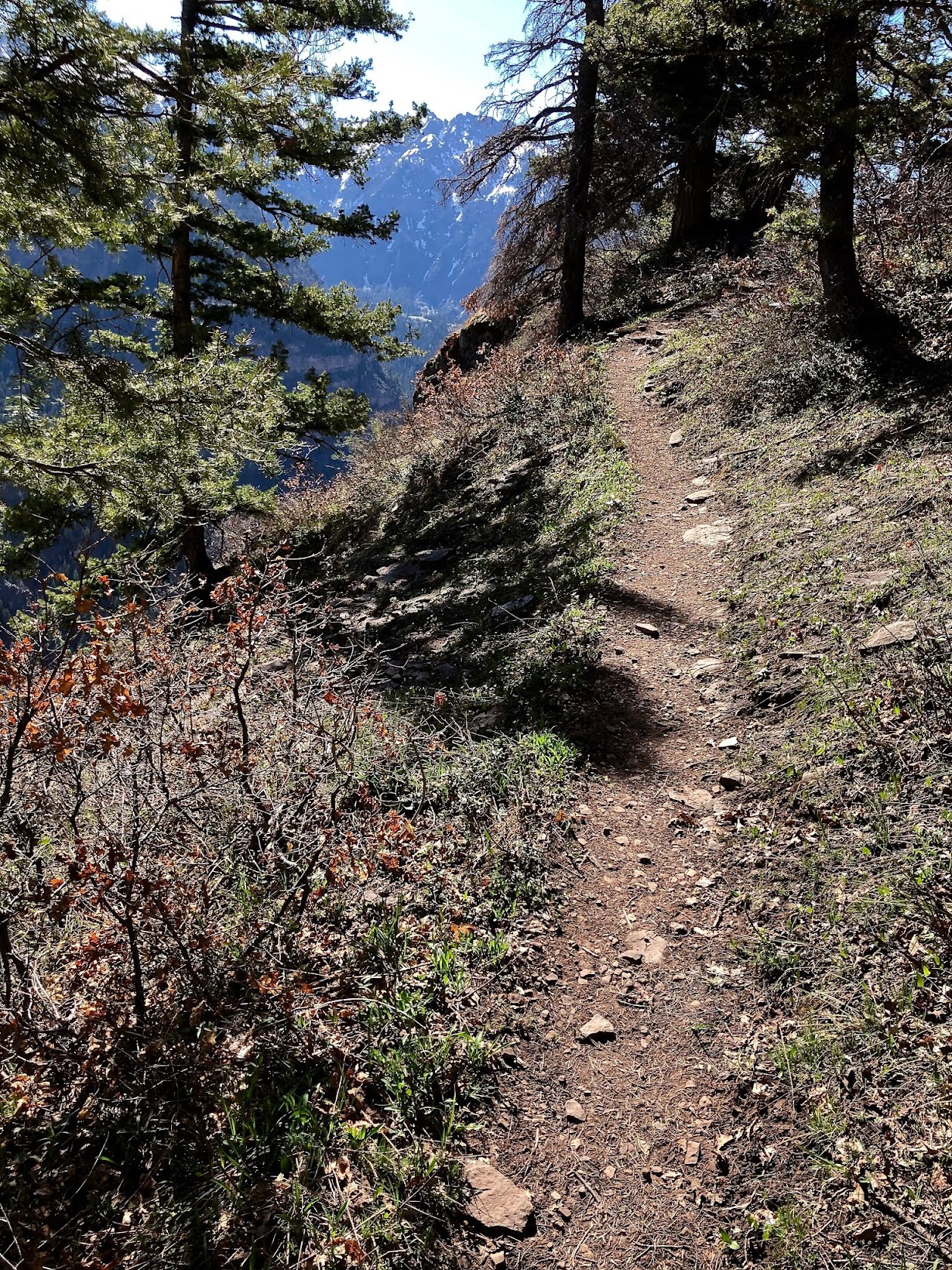 I love the way Silvershield hugs the cliff-edge in places. Remember the "neighborhood" photo? Below is another perspective...only higher up. 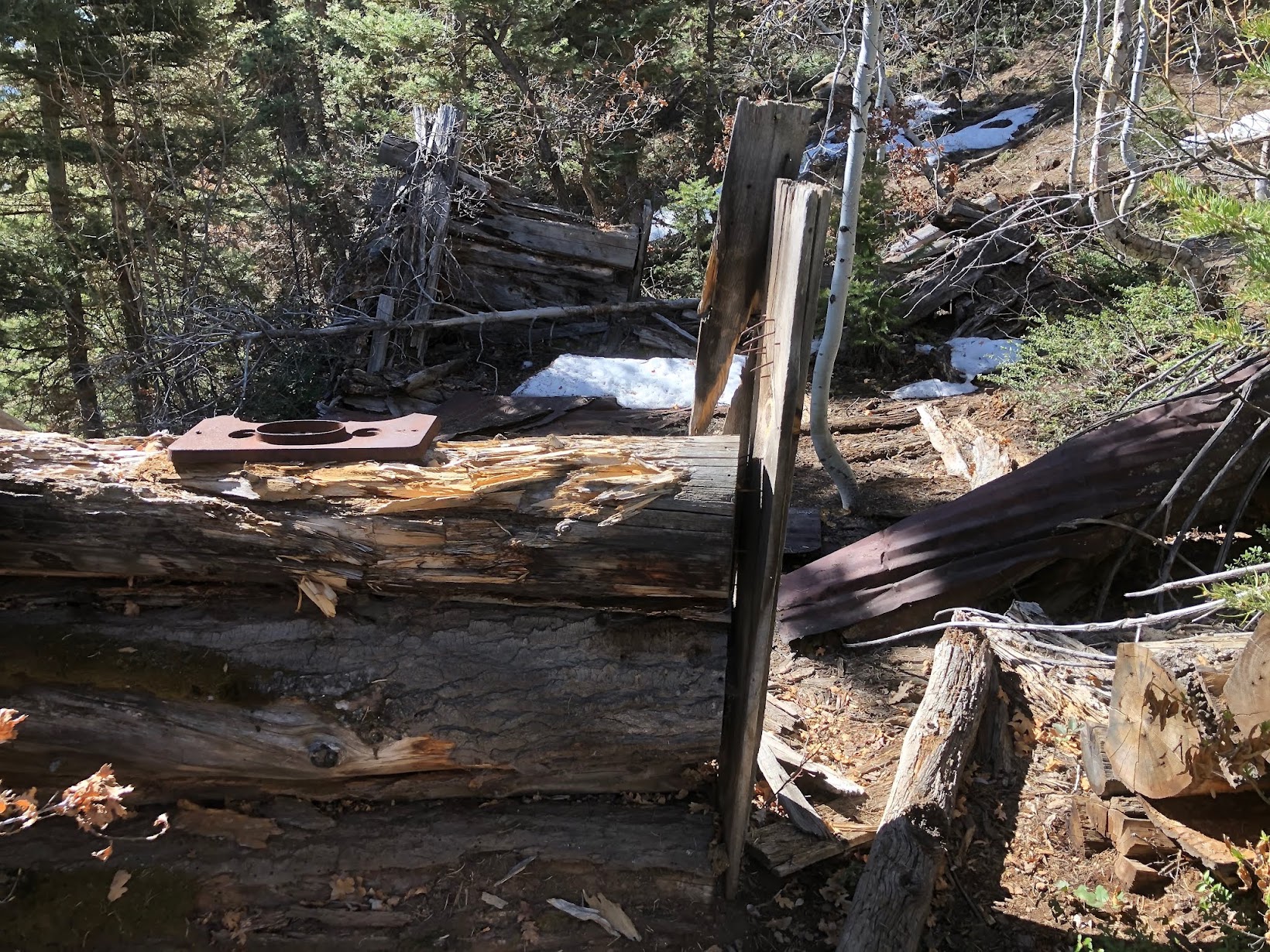 Near the cliff-edge, we stumbled across an old miner's cabin. It had astonishing views across to the Ridge to the Bridge of Heaven. 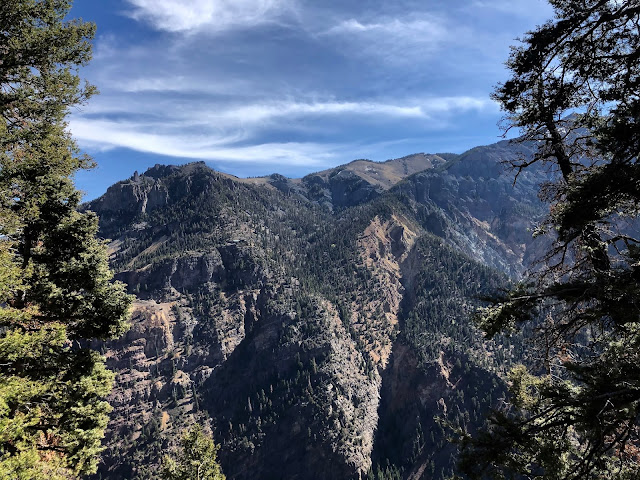 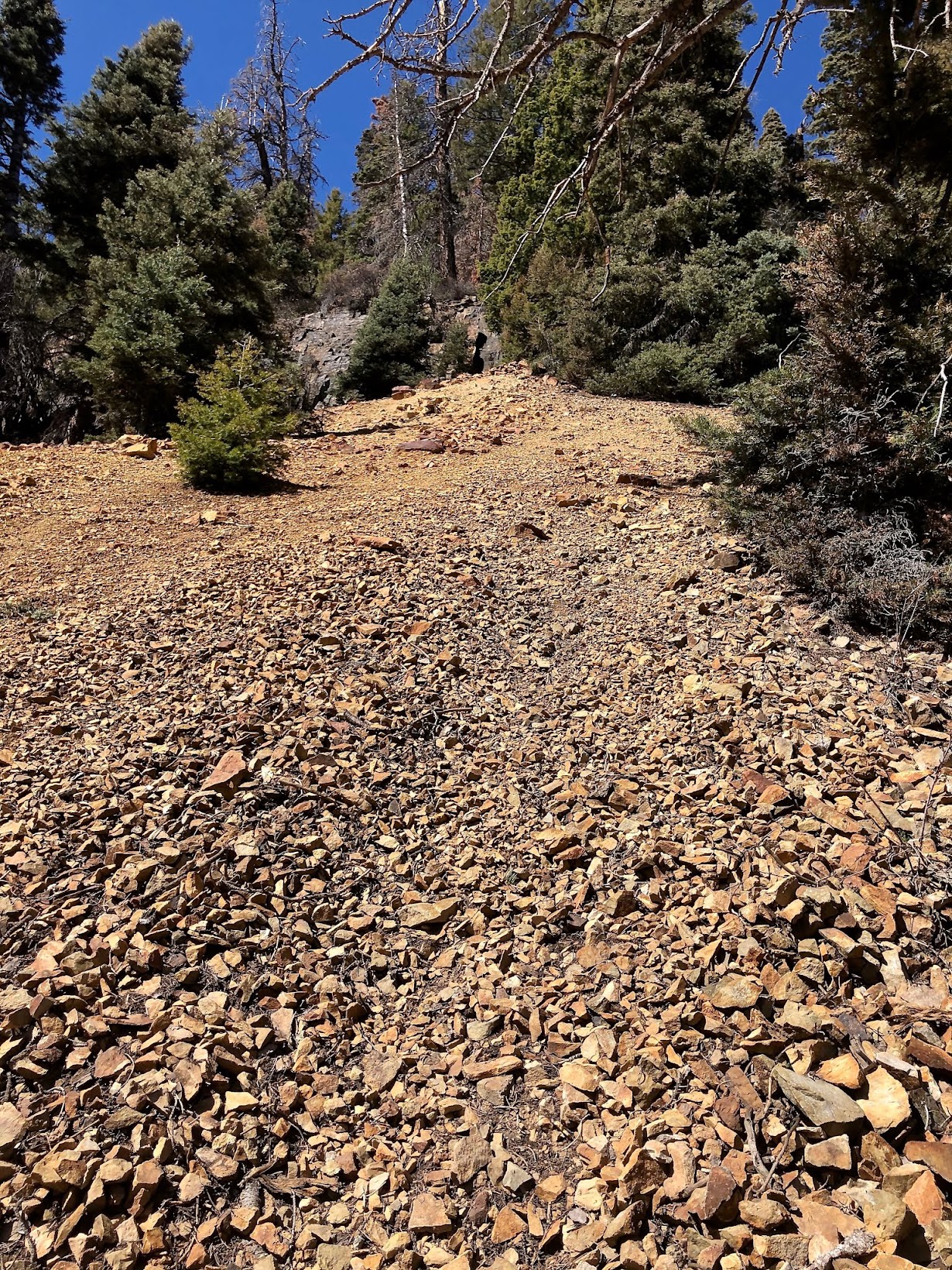 Only a short walk from the miner's shack, Silvershield crosses a scree of colorful mine tailings... 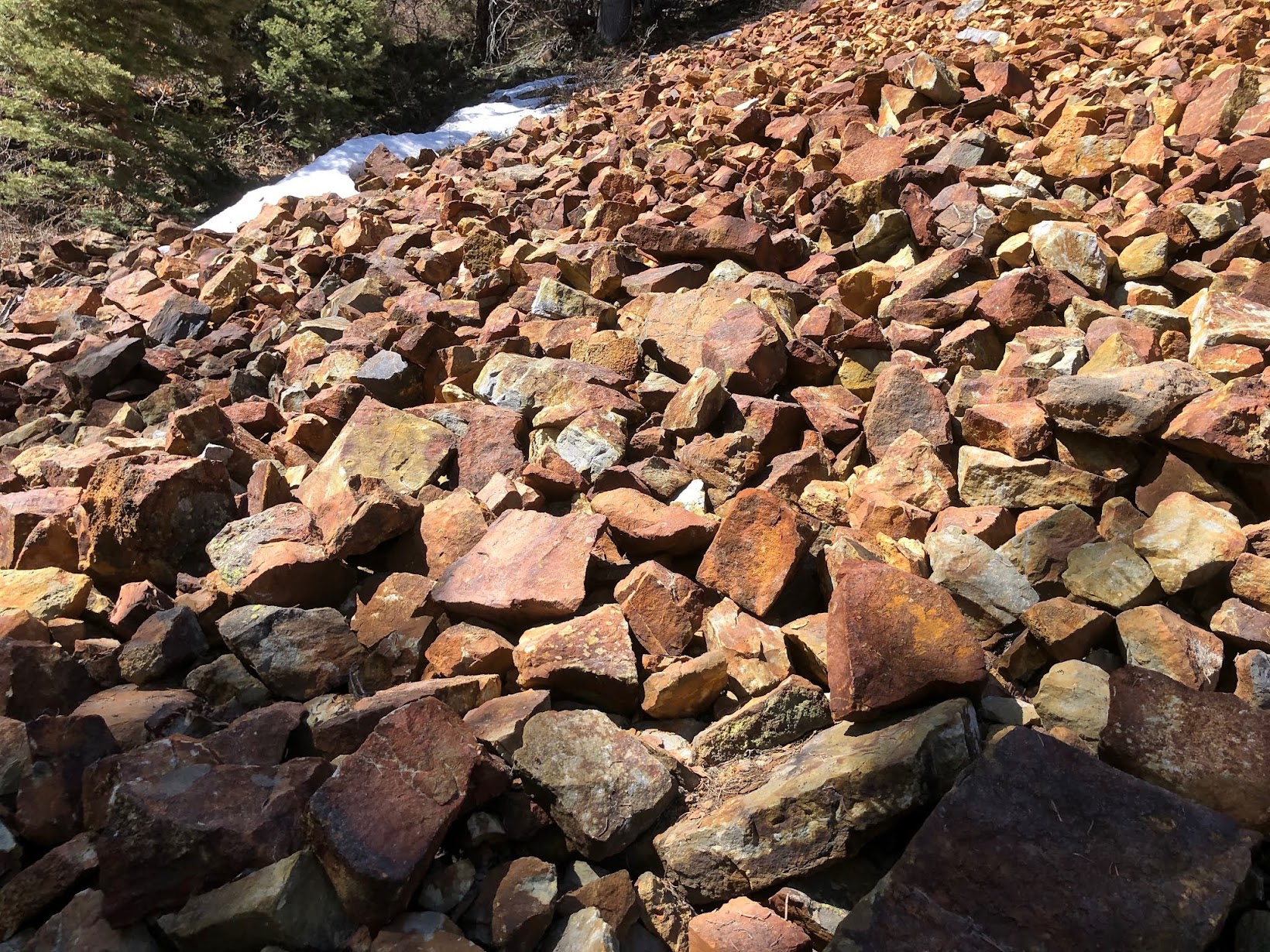 Now Bobbie and I have hiked Silvershield more times than we have fingers and toes on which to count, yet never have we ever noticed dinosaur tracks right under our noses.

Thanks to Mike Boruta's (https://www.ouraybyflight.com) Facebook post, we learned about the Dino tracks on Silvershield. Honestly, I don't know how we missed them all those years. I think maybe because some trail angel finally swept the gravel off and made them more visible. Anyway, kind of cool! 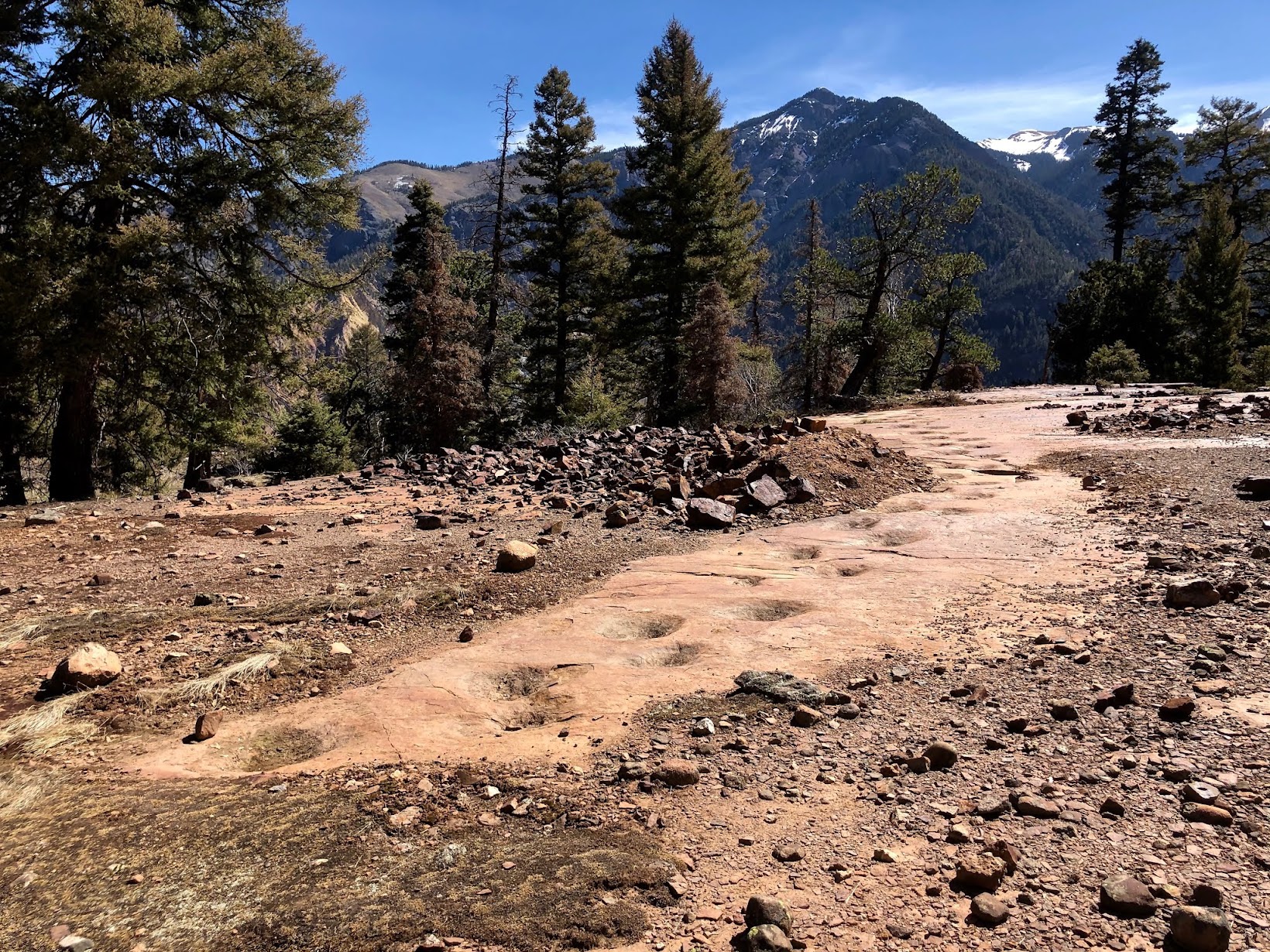 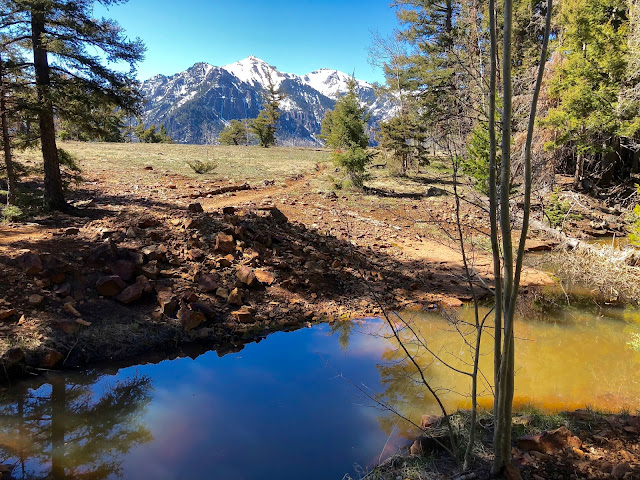 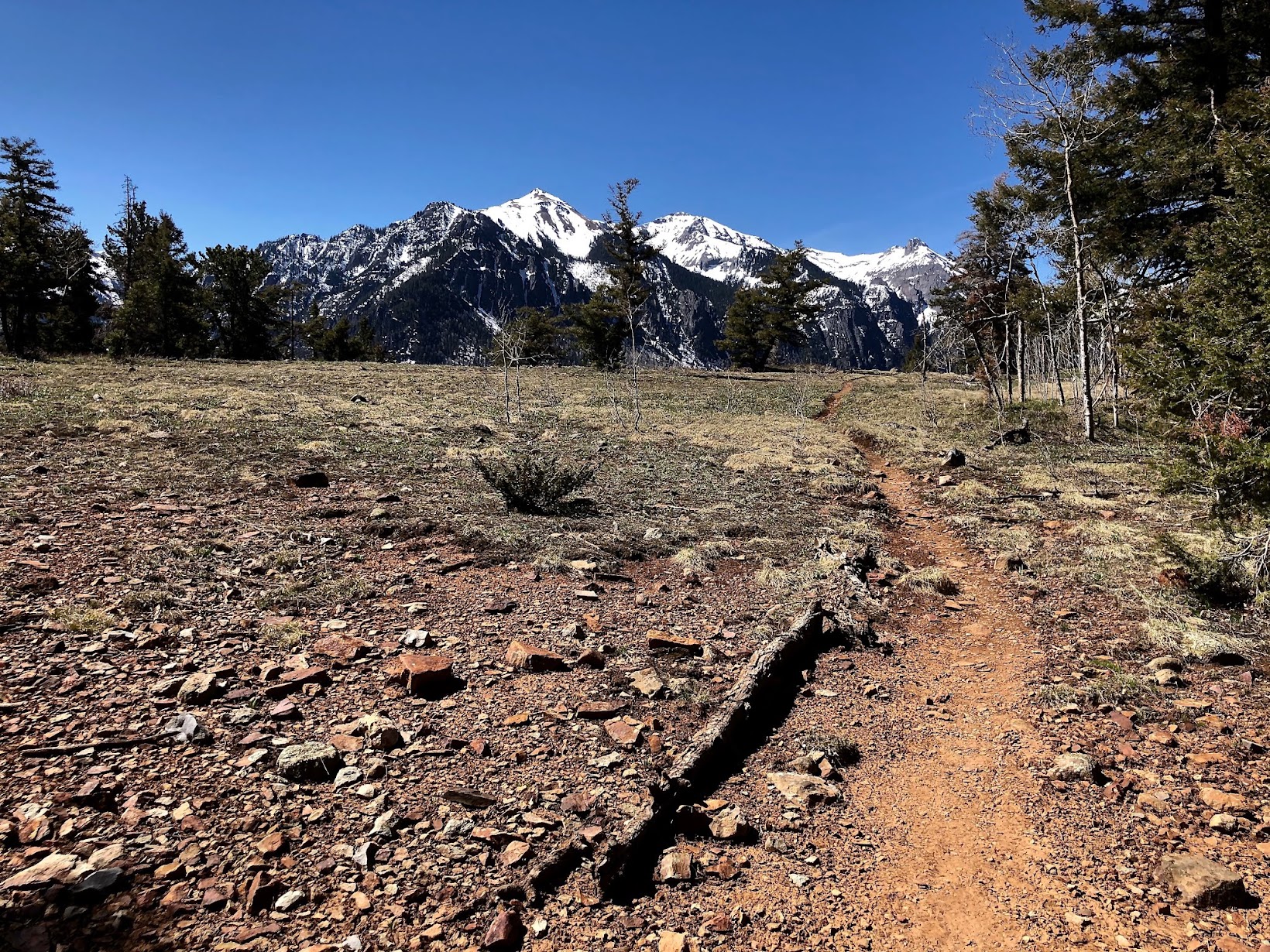 Another cliff, another outstanding view.

Above, Twin Peaks, and below another "summertime" favorite climb, Mount Abram (just left of center). 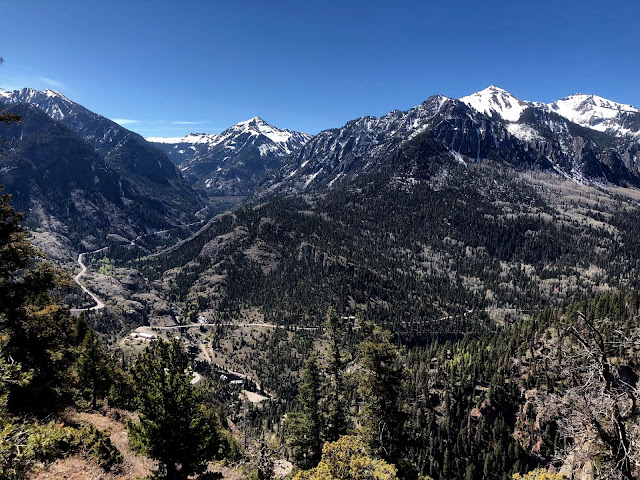 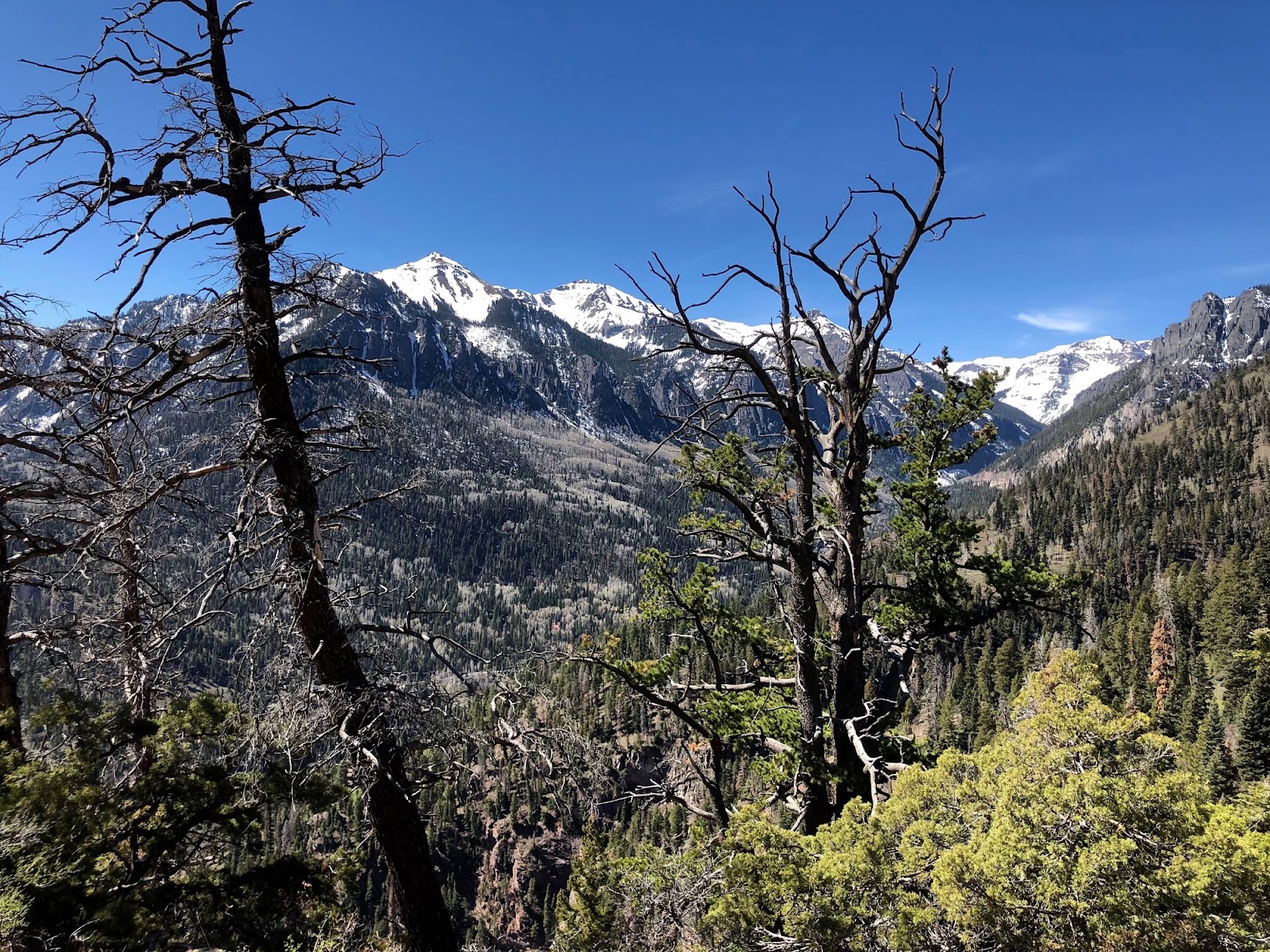 After nearly 2000 feet of elevation gain, I hung a right on the trail to Twin Peaks and started yet another climb. Somewhere behind, the gals were taking their time and "smelling roses." I texted that I was going to go for Twin Peaks. I got a response to, "Have fun."

Okay, work is fun. I love the hike up to Twin Peaks...but only if the snow gods cooperate. I have be rejected so many times by jumping the gun. Sure enough, I began to encounter patches of snow. Fortunately, nothing I couldn't negotiate by following someone else's footprints. I love early birds :) 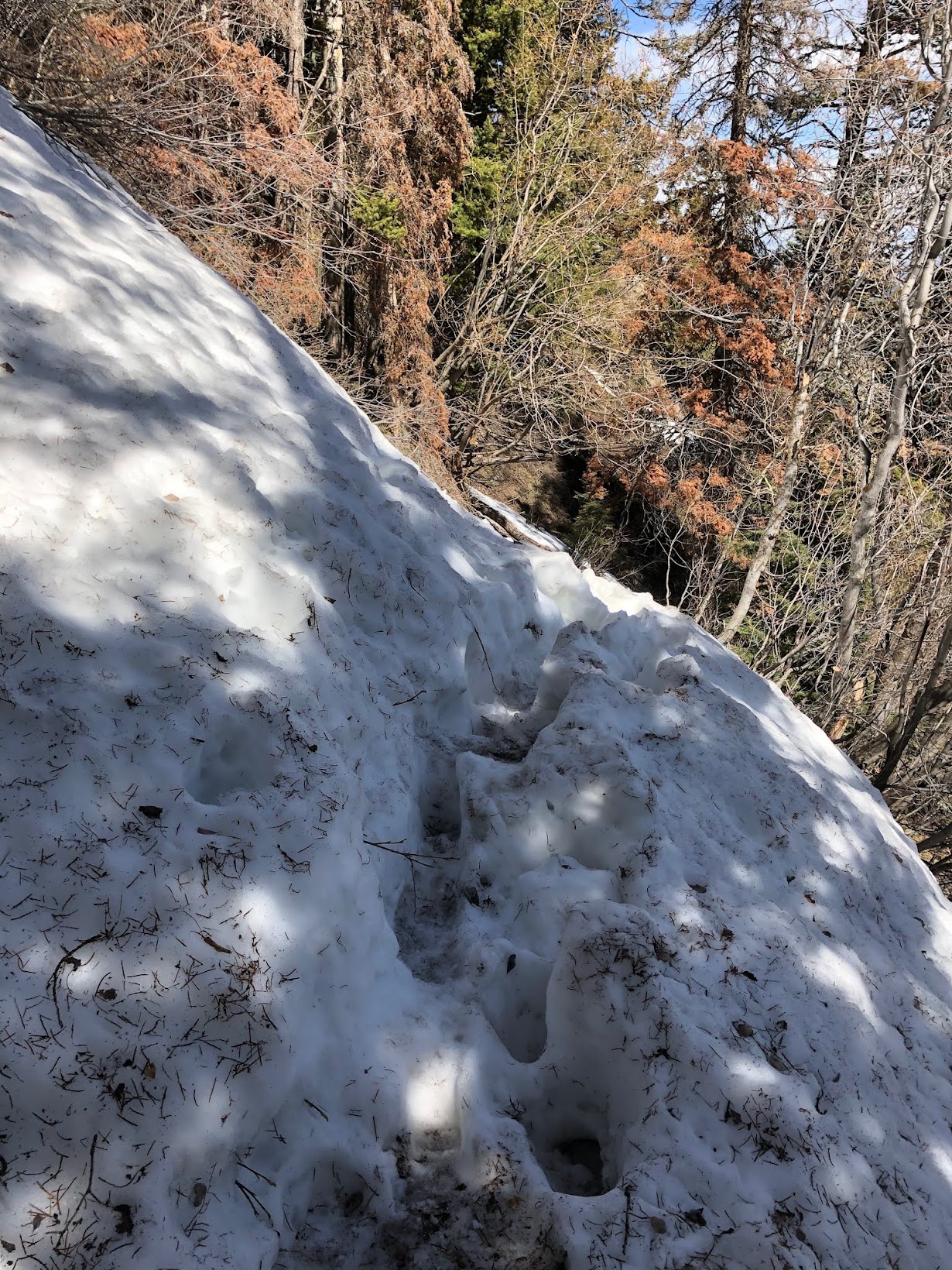 Long story longer, a little over halfway to the summit is the spoils-of-winter crux on the route to Twin Peaks...a shady north-facing, well-timbered, steep section that always drys out my annual spring wet dream for an early summit.

If not for this one spot, the rest of the hike is totally doable. The friendly footprints I had been following did an about face at the snowy "crux." I'm over half way and I know that if I can just get past this one section, Twin Peaks will me mine-all-mine...as in, all-to-myself, alone-at-the-top. I could be peering (or peeing, for that matter) off boot-tips, 3000 feet above Lovely Ouray. That's the "rose" I wanted to smell.

I started the climb on snow crust that was frozen, but slicker than ice...mostly because it was "ice." Traction was impossible...until I broke through the fragile crust into a thigh-deep posthole. After 15 minutes of struggle, I was beginning to think about phoning the gals to come to my rescue. Finally, I was able to retrieve my lost leg by laying on my back, head downhill, and pulling with all my might.

The problem with abandoning an "anchor" while your head is pointed down a steep bank of snow is, well, you become a human bobsled in search of a brain injury. Somehow, while accelerating at the speed of light, I managed to get turned around enough to dig my heels into the snow...just before shooting off into an abyss of aspen saplings and downed pine trees. My butt was sopping wet and cold, of course. Bare skin was bleeding from all the razor sharp shards of ice-cuts endured on the bobsled run. Oh well...
"Houston, crisis averted."
"Roger that Mark. Now get your ass home."

The girls took the long way back to town, via Oak Creek Trail. I'd had enough miles and was ready for a shower and beer. I decided to take the infamous and precipitous Old Twin Peaks Trail, a "shortcut" that's pretty much another bobsled run...only on dirt...especially in dry conditions, which we have had for like going on three weeks now. 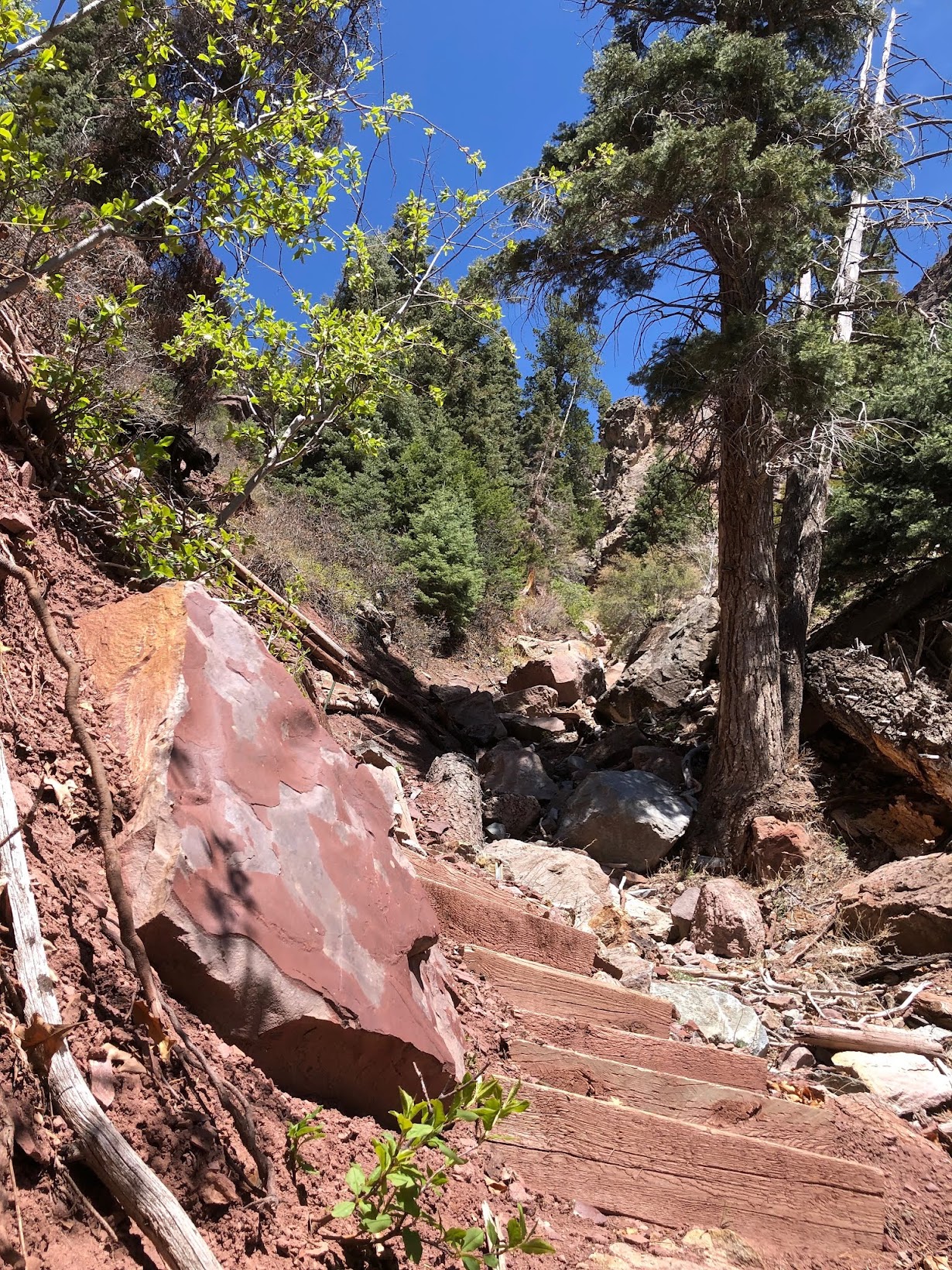 Suffice it to say, it was pretty much a flailing, out of control, suicidal descent. Winter slides had left boulders, rocks, and loose pea gravel everywhere I needed stability. I ended up grabbing at limbs and bushes, anything, in desperate attempts to slow my free-fall into a gorge. Problem was, about half of the bushes I grabbed were thorny raspberry, which left my palms bleeding and tender. Note to self: get some leather gloves!

It's weird how much one (over) uses core muscles when trying to stay on their feet while descending a slippery surface. I felt like I had done a thousand sit ups the next day. I'll give Twin Peaks trail another go in a couple weeks. Of course I'll be using Old Twin Peaks Trail again because old dogs don't know better. Otherwise, there would be no story to tell, right?
Peace out,
Mark...along with Bobbie and her gal-pal hiking friends.