Above the Fray on a Beautiful Fall Day 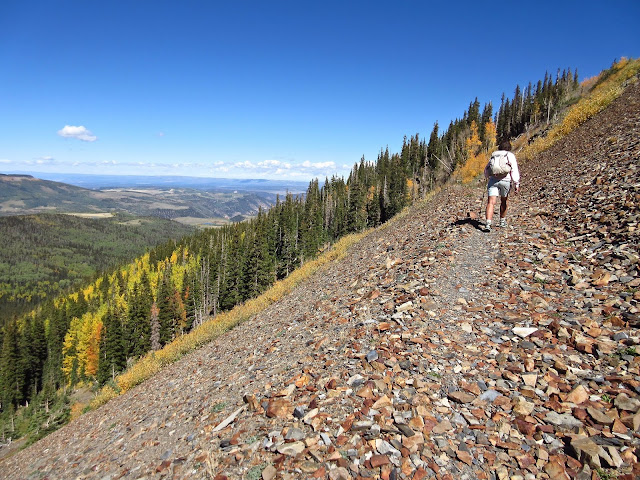 Fall came mid-September this year, early by a couple weeks. But aspen and oak brush colors have been in a brilliant and beautiful holding pattern. I wish I could say the same for the forecast, as today is the first of 10 to 12 days of rain, then snow, followed by more rain and dismal grey clouds that tend to suffocate needy outdoor types. Could be the time has come to bail Goldie out of jail.

Hard to believe it's been a month since we hiked from Woods Lake to Navajo Lake at the base of 14ers, El Diente and Wilson Mountain. That trek reminded us that Wilson Mesa is heavily populated with aspen, and we vowed to return for a peek at their leaves.

And man-oh-man, with 14'ers El Diente and both "Wilsons," for a backdrop, it just doesn't get any steeper, rugged, rocky, wilder nor more beautiful than that.

What with the merciful sun-all-day forecast and plans loose as unset Jello, we moseyed toward Telluride to check on Ms Autumn's progress. About midway between Placerville and Telluride we hung a right off Route 145 toward Wilson Mesa on Silver Pick Road, then followed it up to ranch country. The road rolled through golden undulating pasture lands be-spotted with intermittent, sun-dappled groves of aspen in various stages of "dress."

The drive had us longing to have been born and raised here around the turn of the 20th century. What a life; pushing cattle to summer in high pastures, bringing them back down to winter near a barn filled with hay where, more often than not, cowboys had to hand feed them in blinding, whiteout blizzards. Made me shiver to think about it.
You want a little "western romance?" Well here you go... 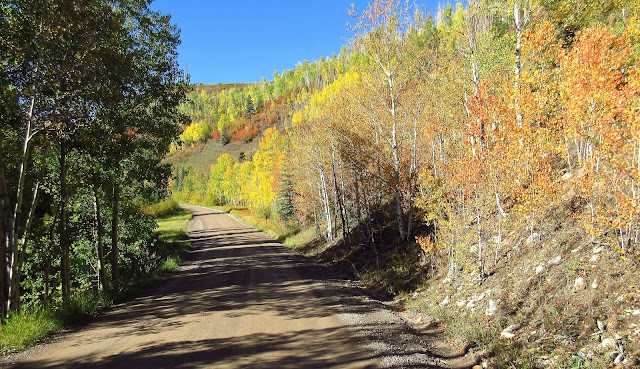 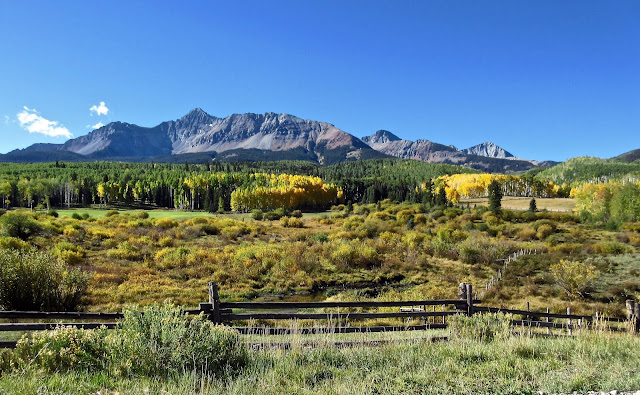 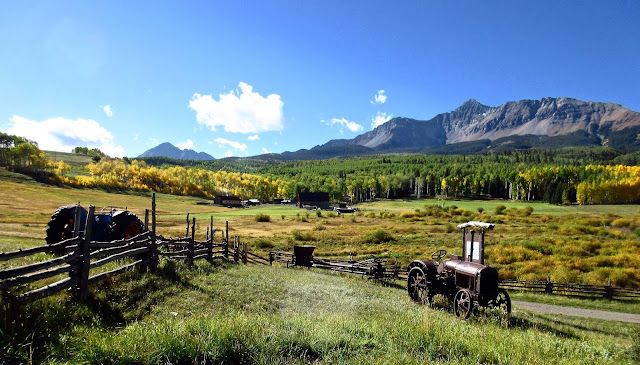 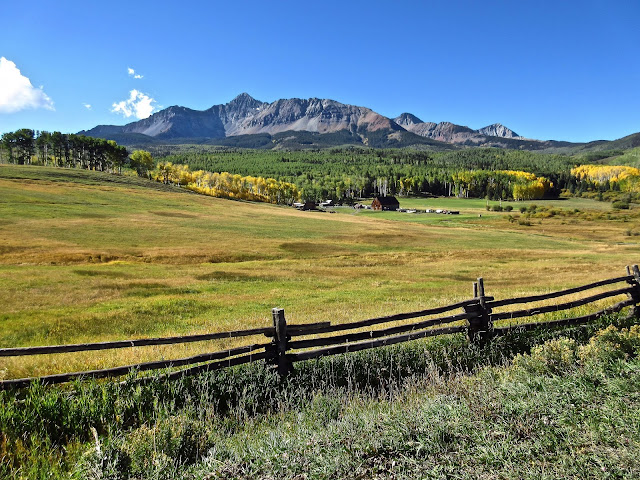 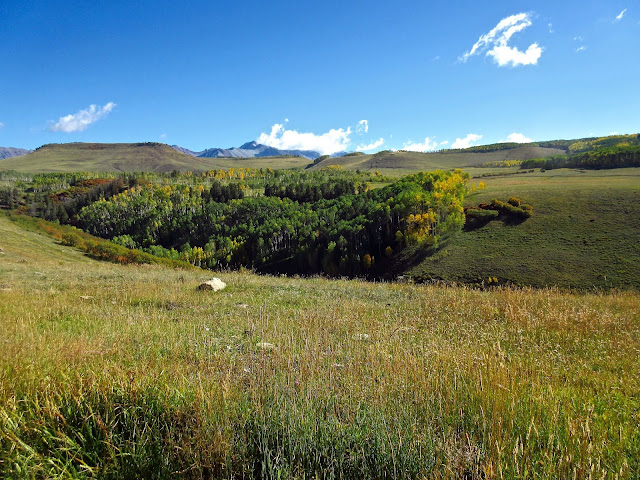 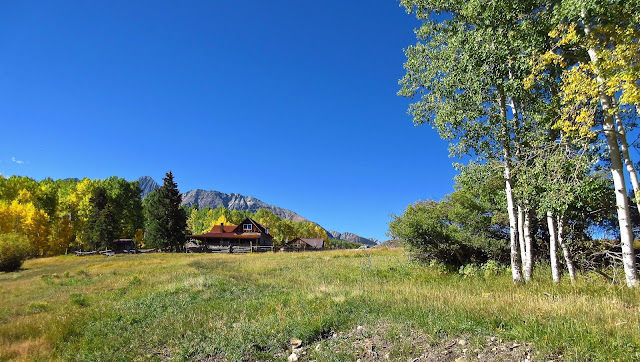 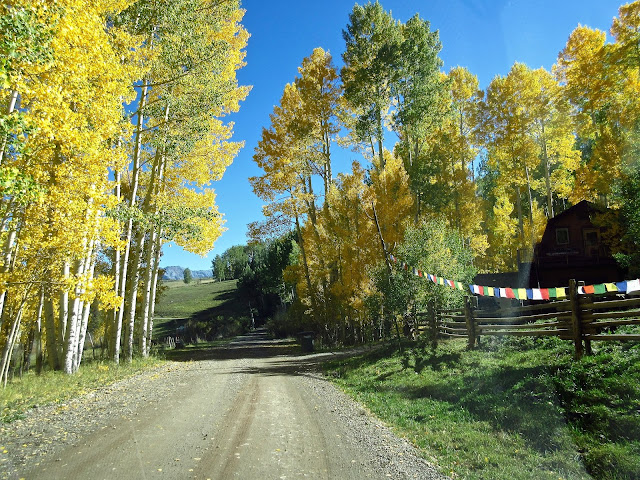 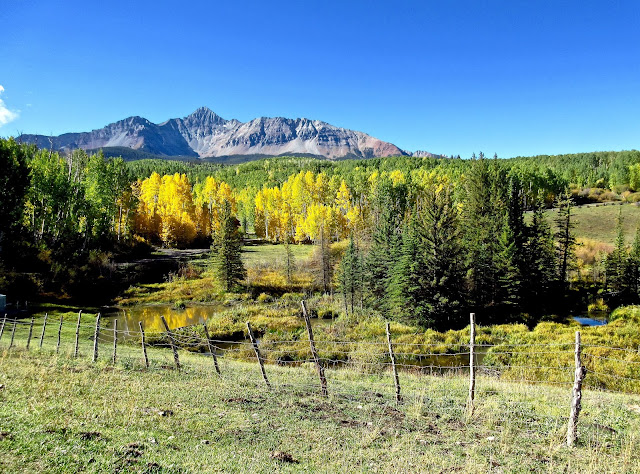 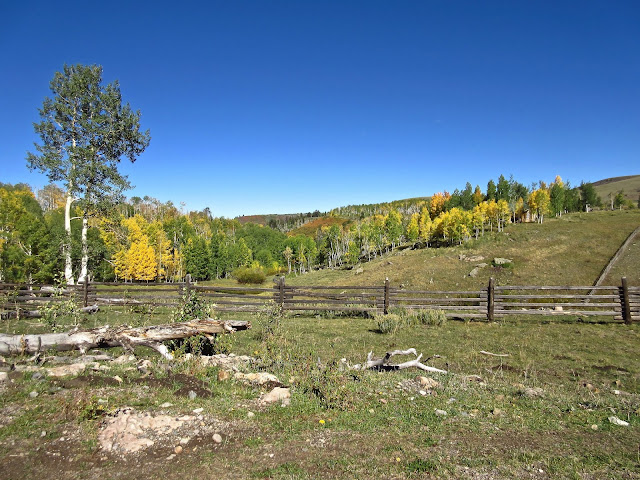 Enough to tear the eye of this grownup Geezer...

After a couple dead ends we intersected the Wilson Mesa Trail. It was almost noon when we finally donned backpacks, a lazy start to what we thought would be a lazy day. Being at 10,000 feet, the air was cold enough to see our breath. To make matters colder we were underdressed in shorts and t-shirts. The trail wound us though a sickening SPF 640 sun-block of pine forest and shade. Then, as we hiked east from Silver Pick Road, Wilson Mesa's trail dropped dropped, dropped...which meant up, up, upon return.

A quarter mile out—that felt like a couple miles—I break the fog of silence. "I'm just not feeling it. You can't see a damn thing for all the trees, and I could use a little sun."  She agreed. We pulled a U-turn and headed back to the car, parked near where Silver Pick Road had been notoriously gated back in the 1980's by a mining claim owner who tired of people walking across his land. He decided he would no longer allow peak-bagging day hikers access to the Wilson's and El Diente, and put up a locked gate.

So we found a side road a couple hundred yards back, a sign read: "Not recommended for passenger cars." Hey, Sue Bee ain't no passenger car! So off we went...down a long steep hill so muddy I was compelled to ask Bobbie if we had a "towing rider" on our policy. Oh Well. Maybe it'll dry out a little while we're hiking...if we go hiking.


About three miles in the road dead ended into a parking lot. It seems the Forest Service had to build this road so climbers could still access 14ers without trespassing. It also appeared that a new trail had been built from the parking lot, and that it reconnected with original route up in Silver Pick Basin...the location of the owner's private gold mine which for years remained off limits to hikers.

Long story shortened, the Forest Service needed to purchase the mining claim in order to reestablish public access. But a dispute over the claim's "value" ensued. Of course the owner wanted something like 17 million dollars, because "Thar's gold up in them thar hills."  It took years and lots of money to negotiate a reasonable solution to "The Gate." Fortunately, Bobbie and I climbed both the "Wilson" 14ers back in 1983, before The Gate.

We couldn't remember much about those climbs, except that we were able to 4WD our pickup and camper all the way to the upper basin, and that we parked by a large two story stone building with a caved in roof. 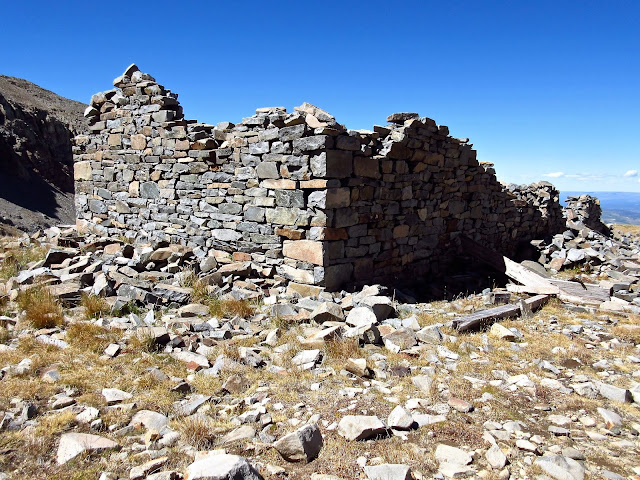 When we return to some place we haven't hiked for a long, long time, obscure memories tend to come out of hiding and float to the surface. Such was the case on this day, as we attempted to ascend our way to Silver Pick Basin below Wilson Peak. Ahh, details—you can't trust them. Some are true, some are imagined, and some get confused with someplace else.

One thing Bobbie and I did not imagine was the searing memory of horrific lightning on the climb up Wilson Peak. Something I had forgotten that Bobbie remembered, was how we shortcut the descent off-mountain in a rush to escape being zapped by lightning. This being such a nice day, I had it in mind to try and make the saddle...maybe even run some of the ridge up toward Wilson's summit.

The new route to 14ers Wilson Peak and Mount Wilson is not bad. It took a bulldozer to plow a serpentine "Shooting Gallery path" through massive piles of rock, which continue to fall from their source, so beware... 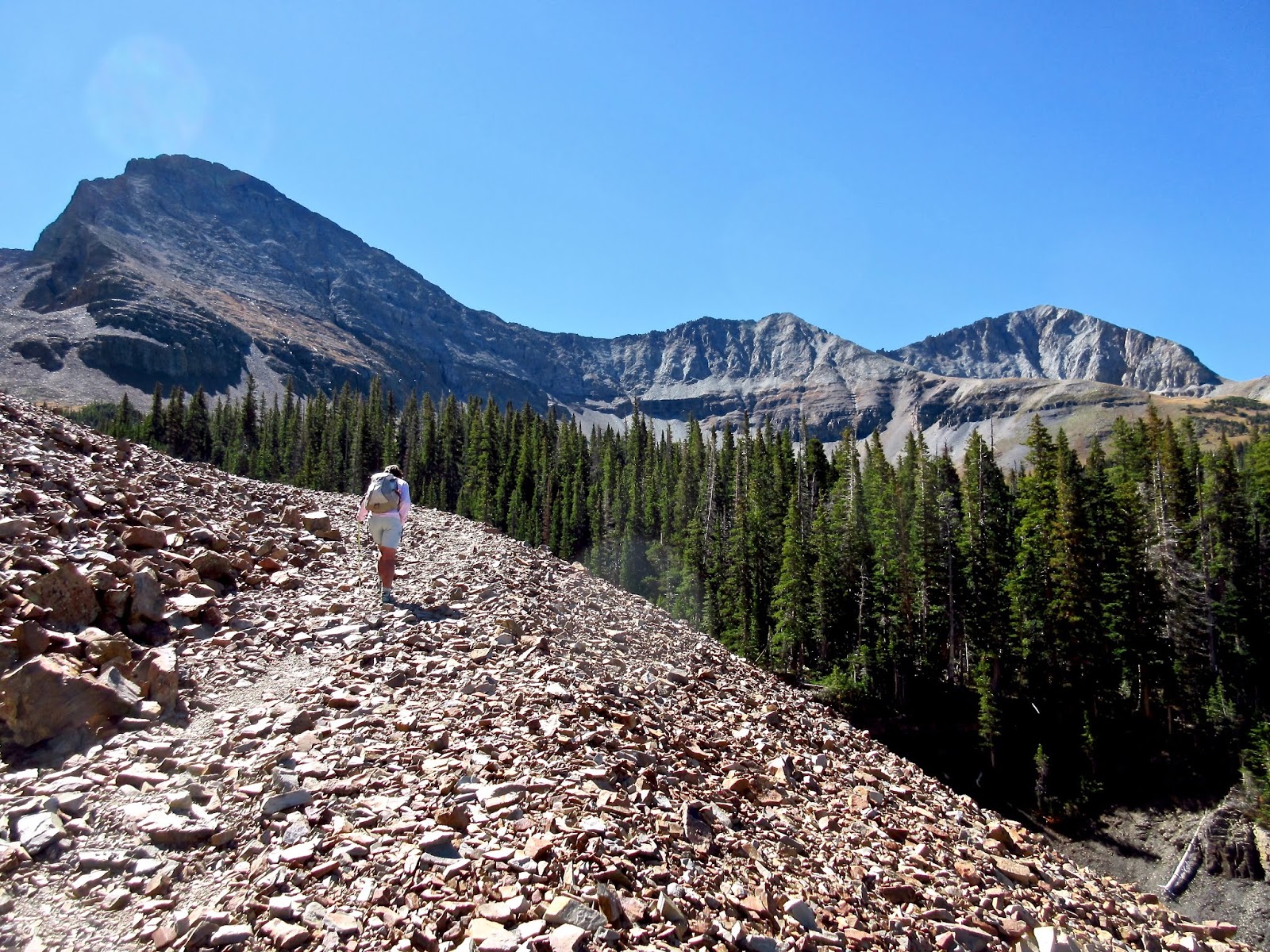 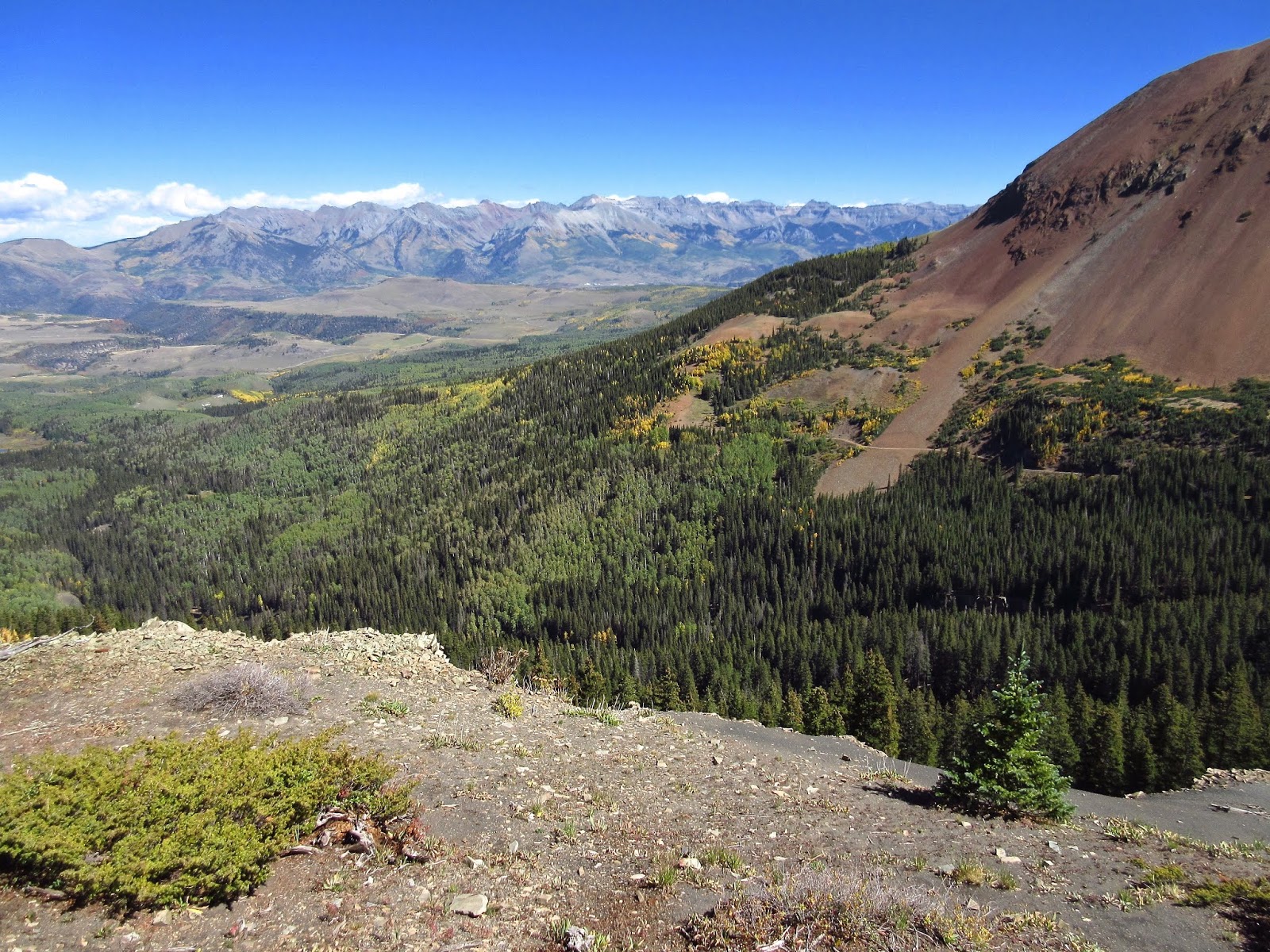 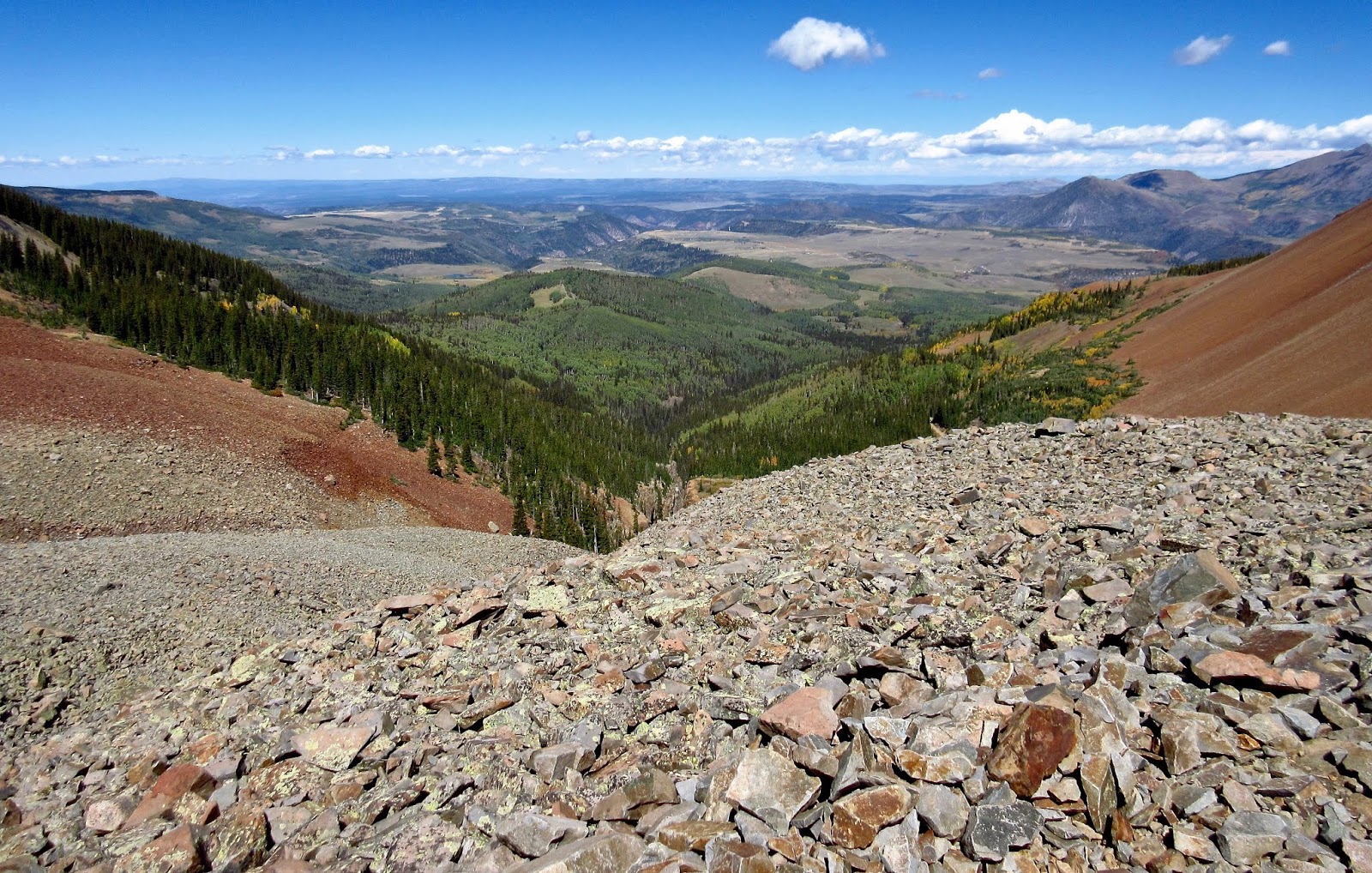 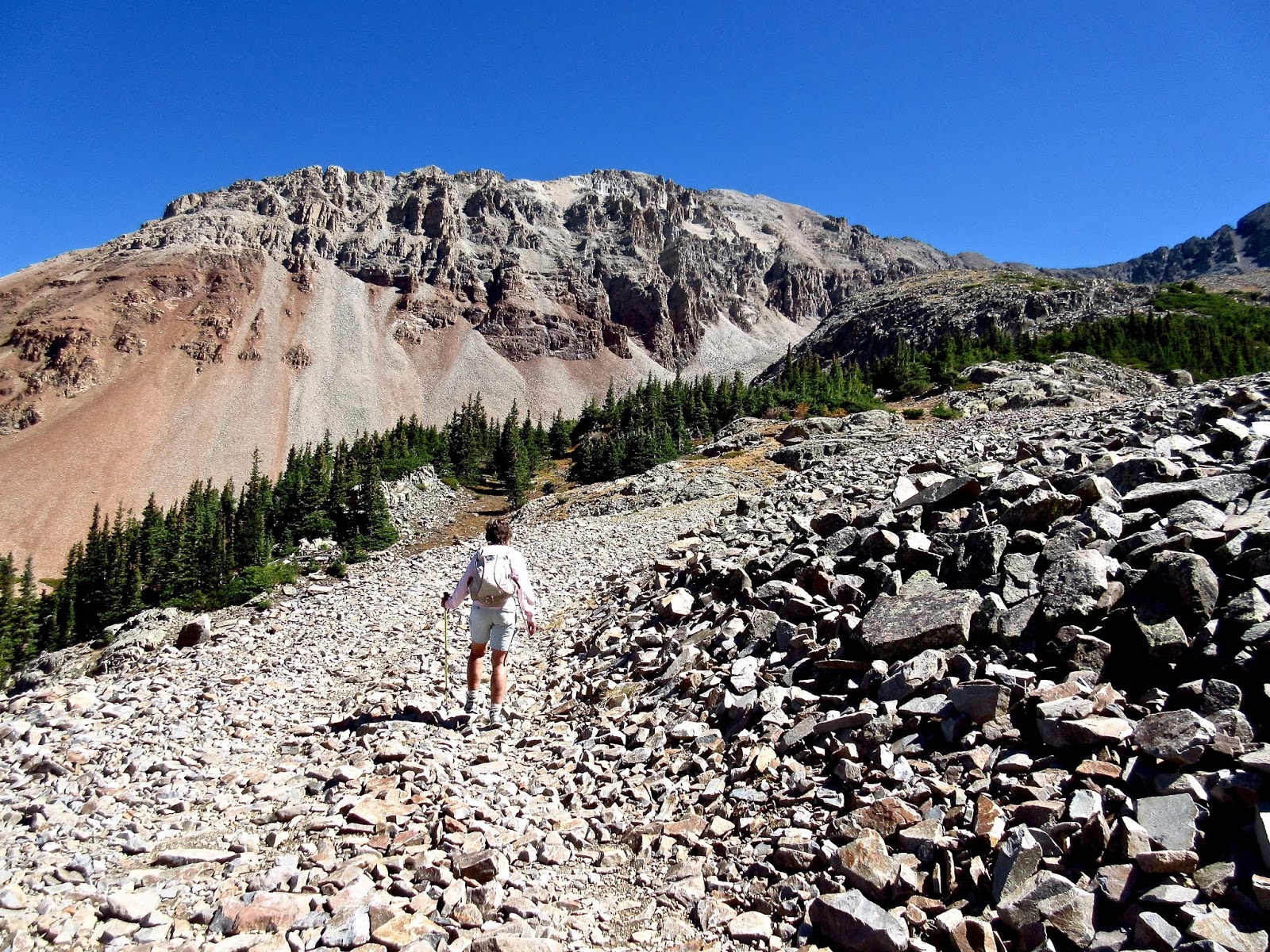 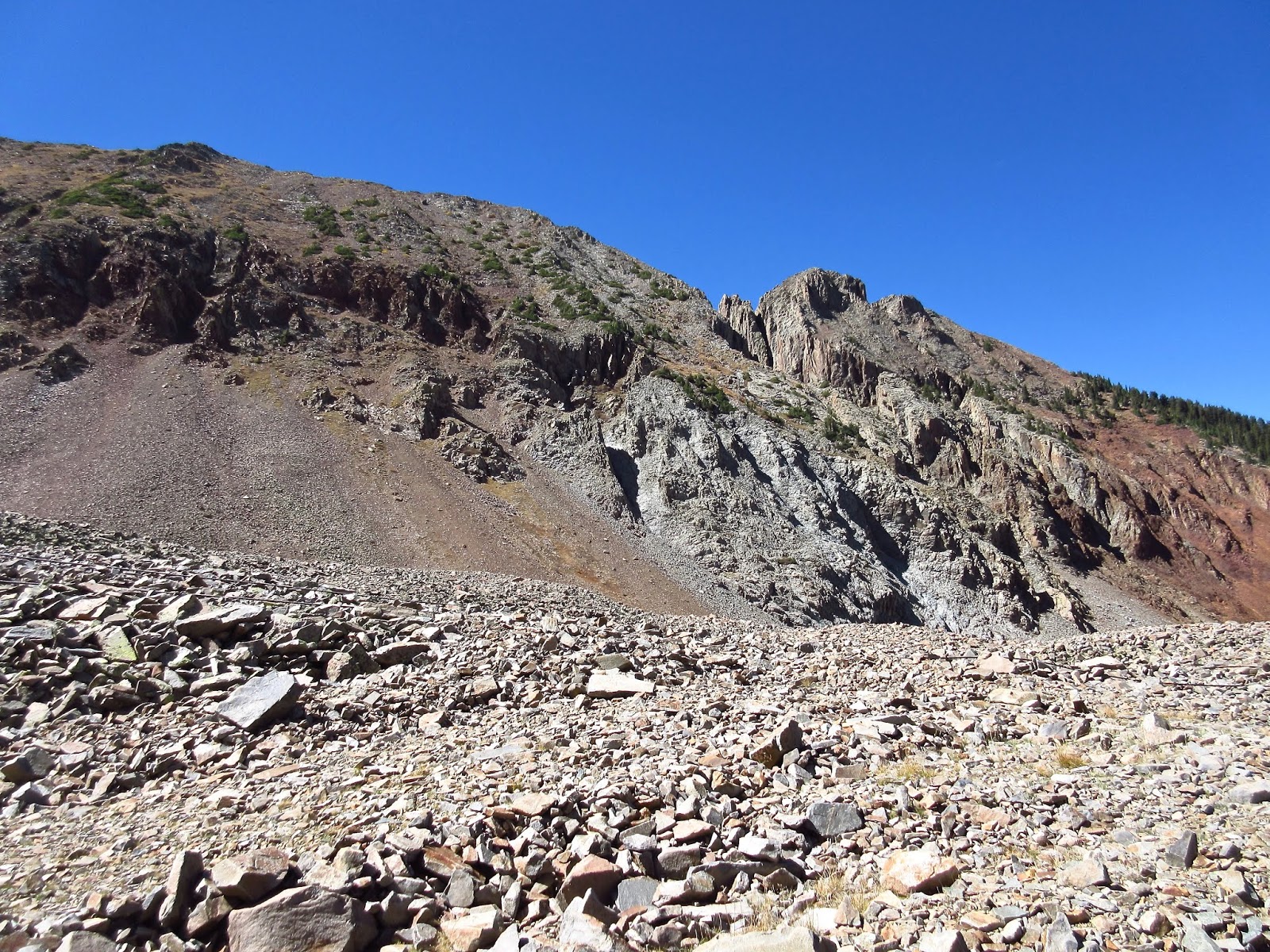 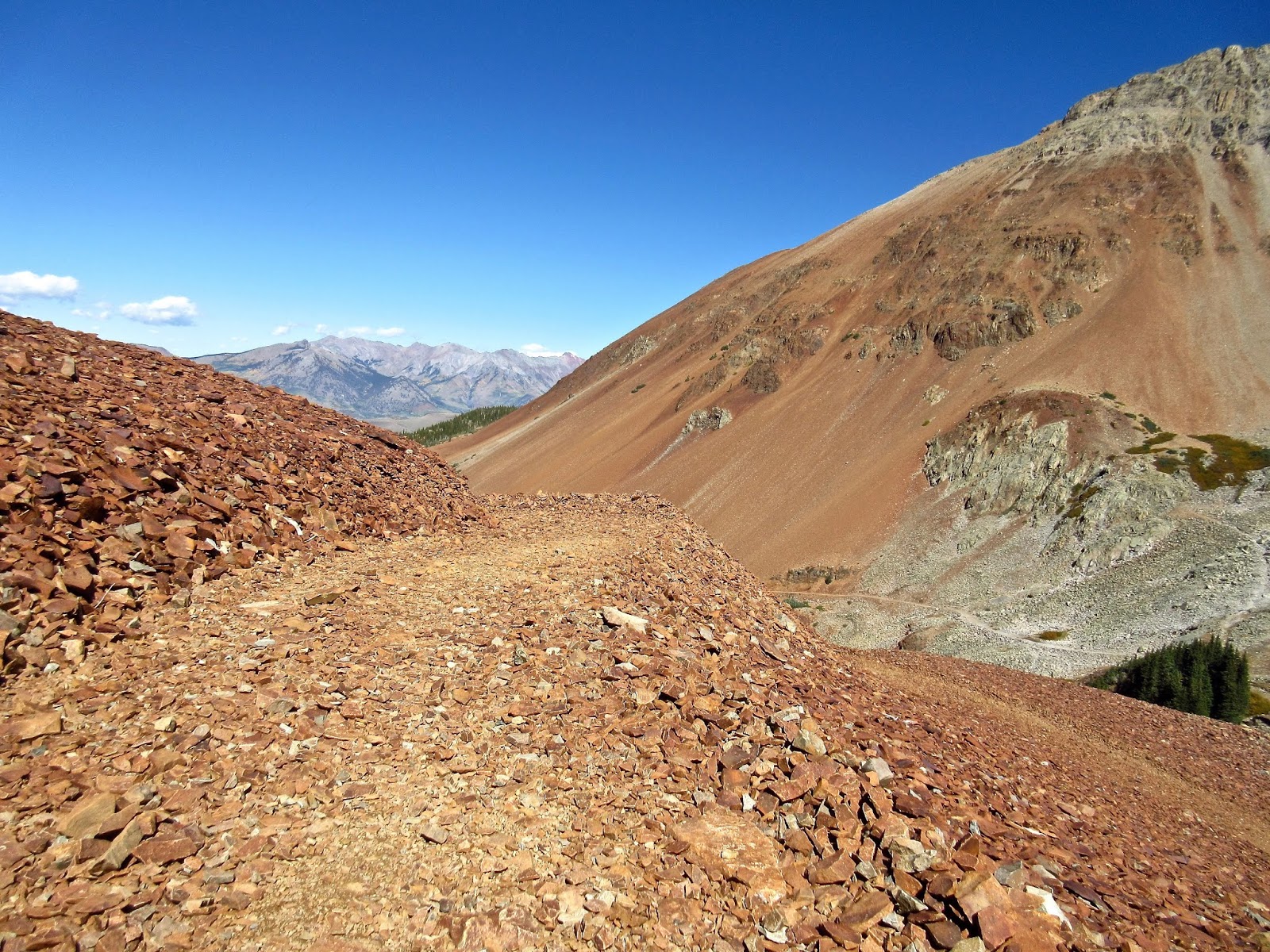 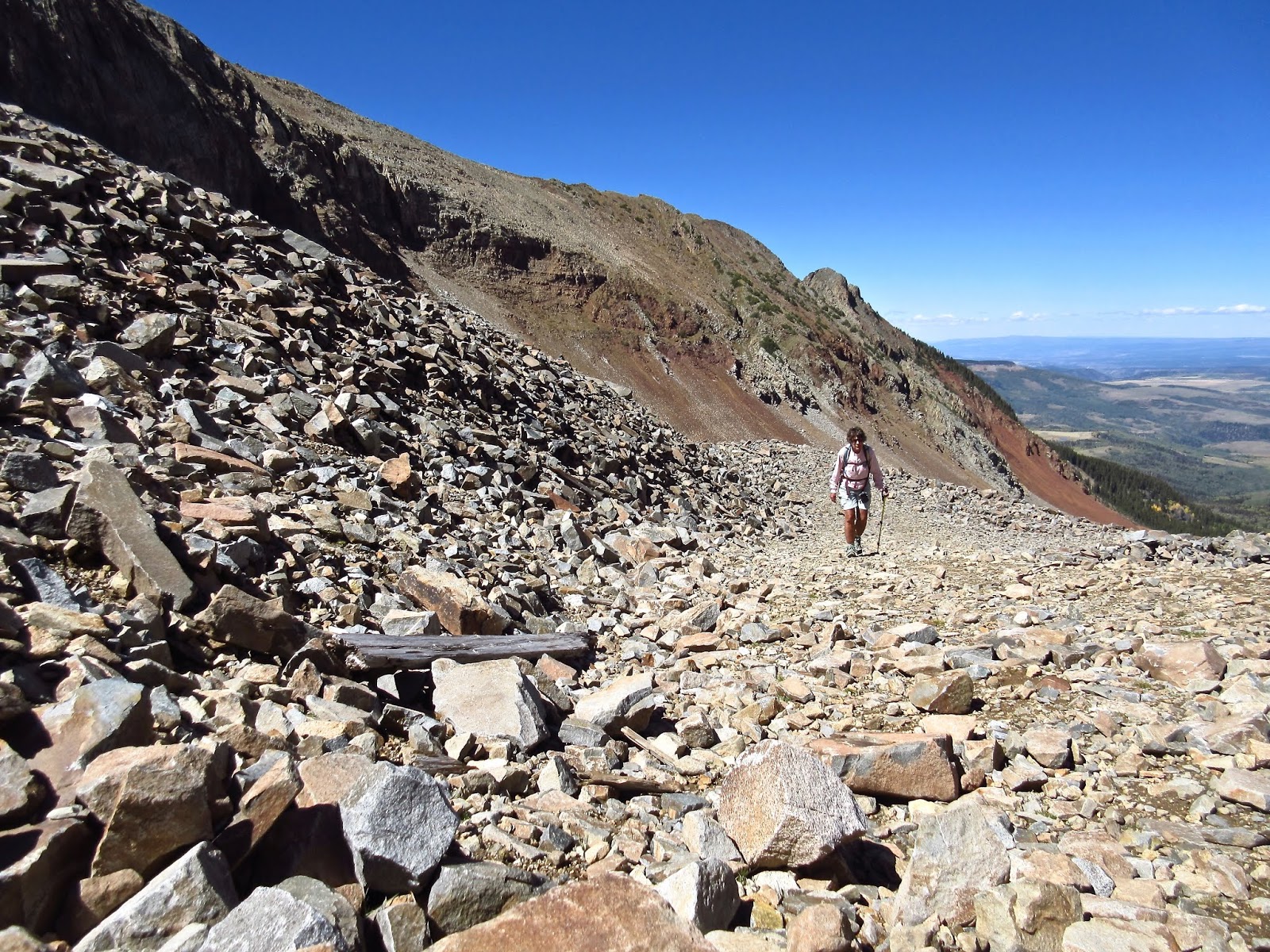 Our energy levels were low as the hike proved longer than expected. When Silver Pick Basin was reached we couldn't find the big stone house that we "thought" we remembered so well. It was here, I told Bobbie. We camped right next to it. 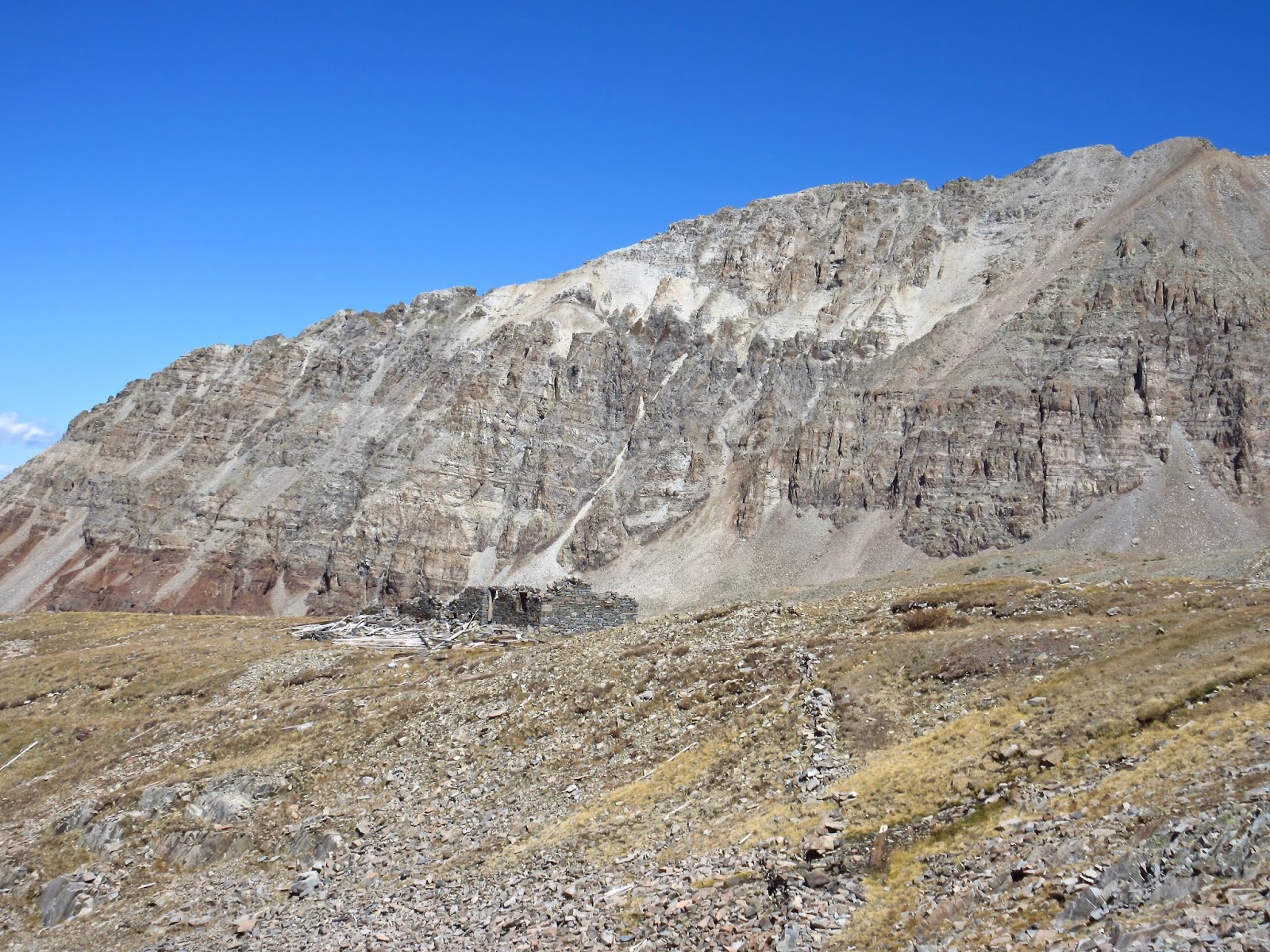 Then we spotted it, on a ridge, blending in with its rocky background. WTF? It looked so much smaller now... 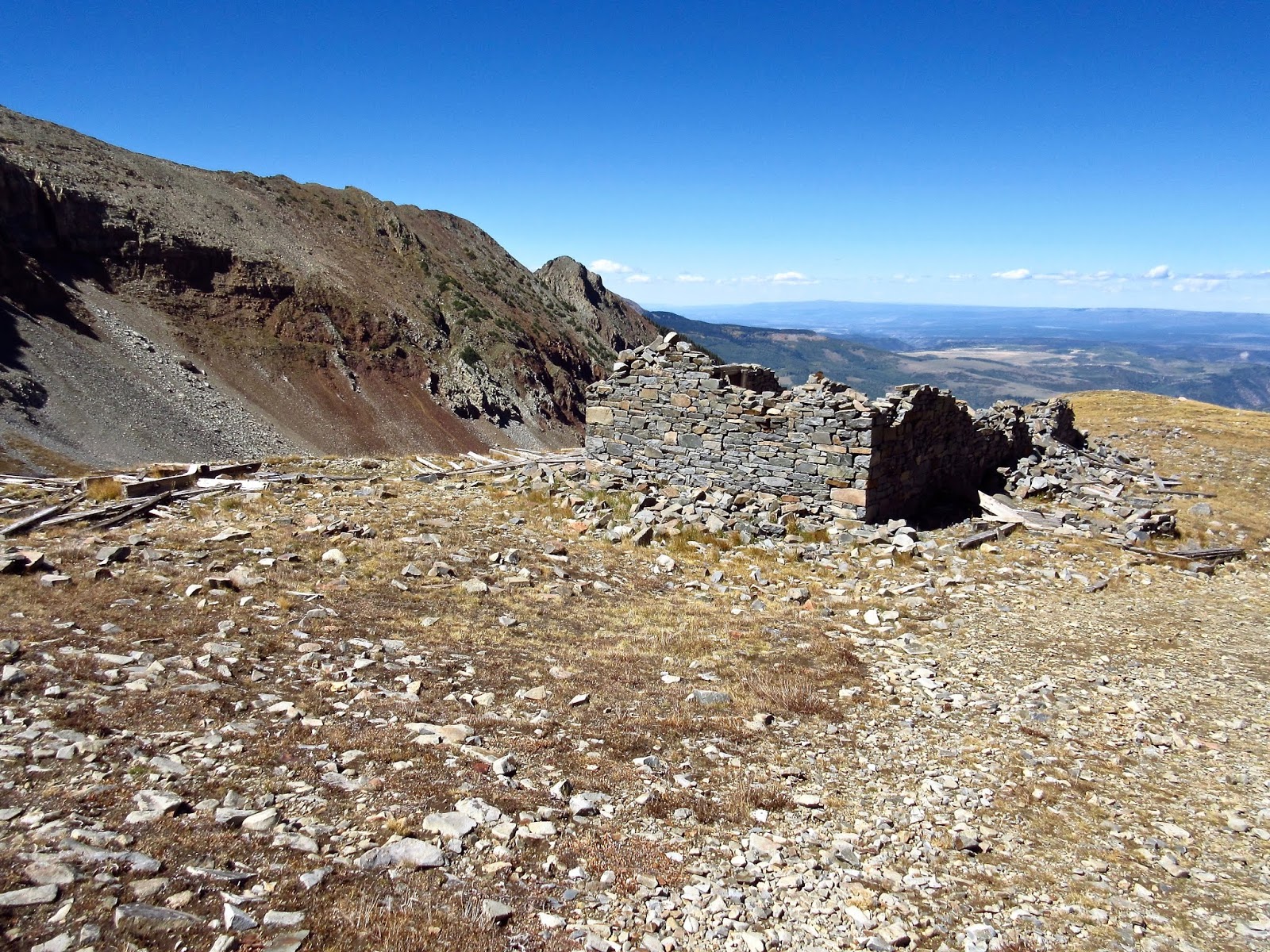 Howling wind, countless blizzards, and some 35 years of time had taken their toll. As with memory, even stone houses fail eventually.

We rummaged through the ruin...back to a time when "work" was done by hand. Each one of these heavy boulders had to be lifted and carried and lifted again...up a series of scaffolds in order to be "placed." Perhaps the Romance of the old west is overrated... 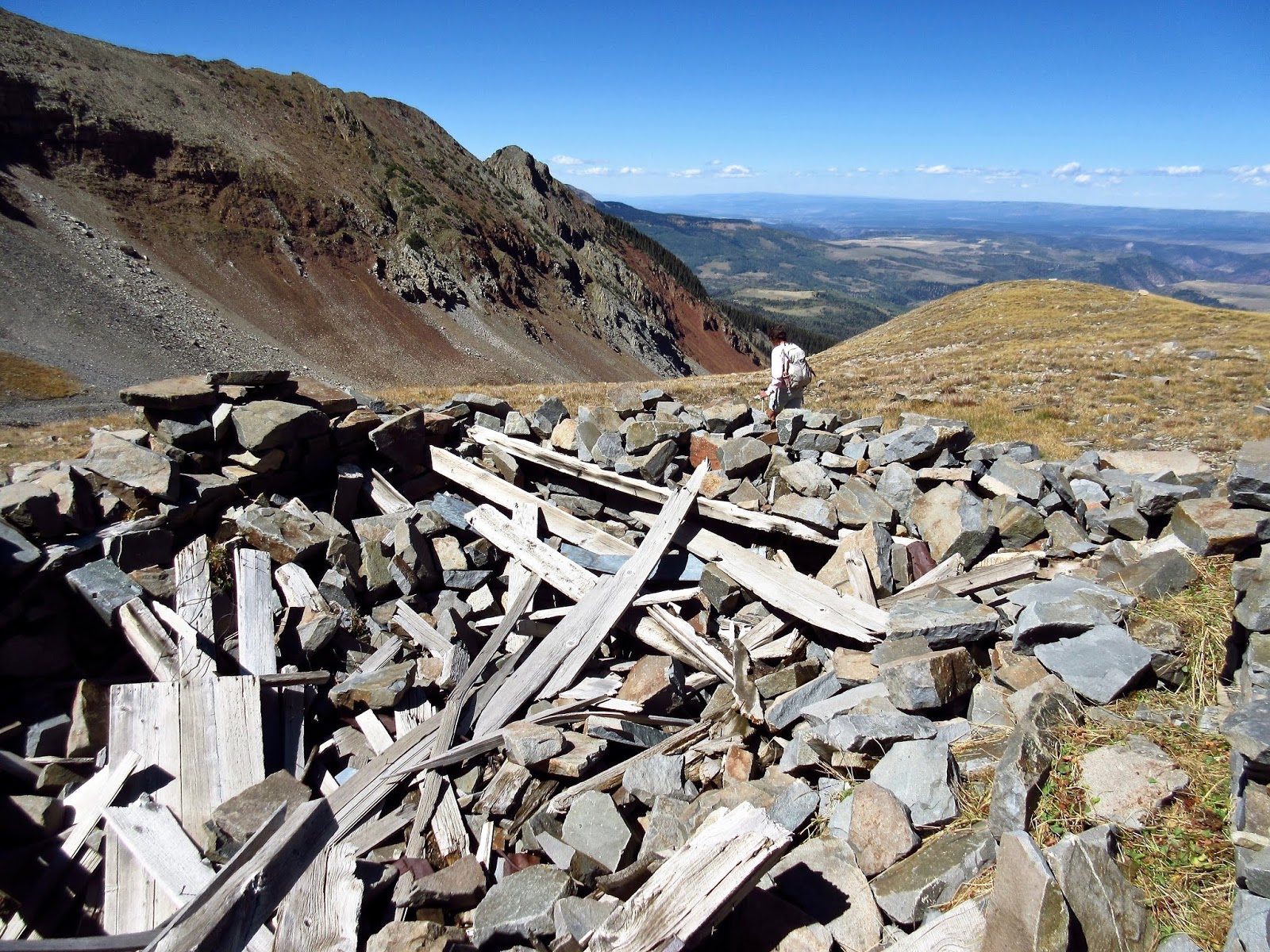 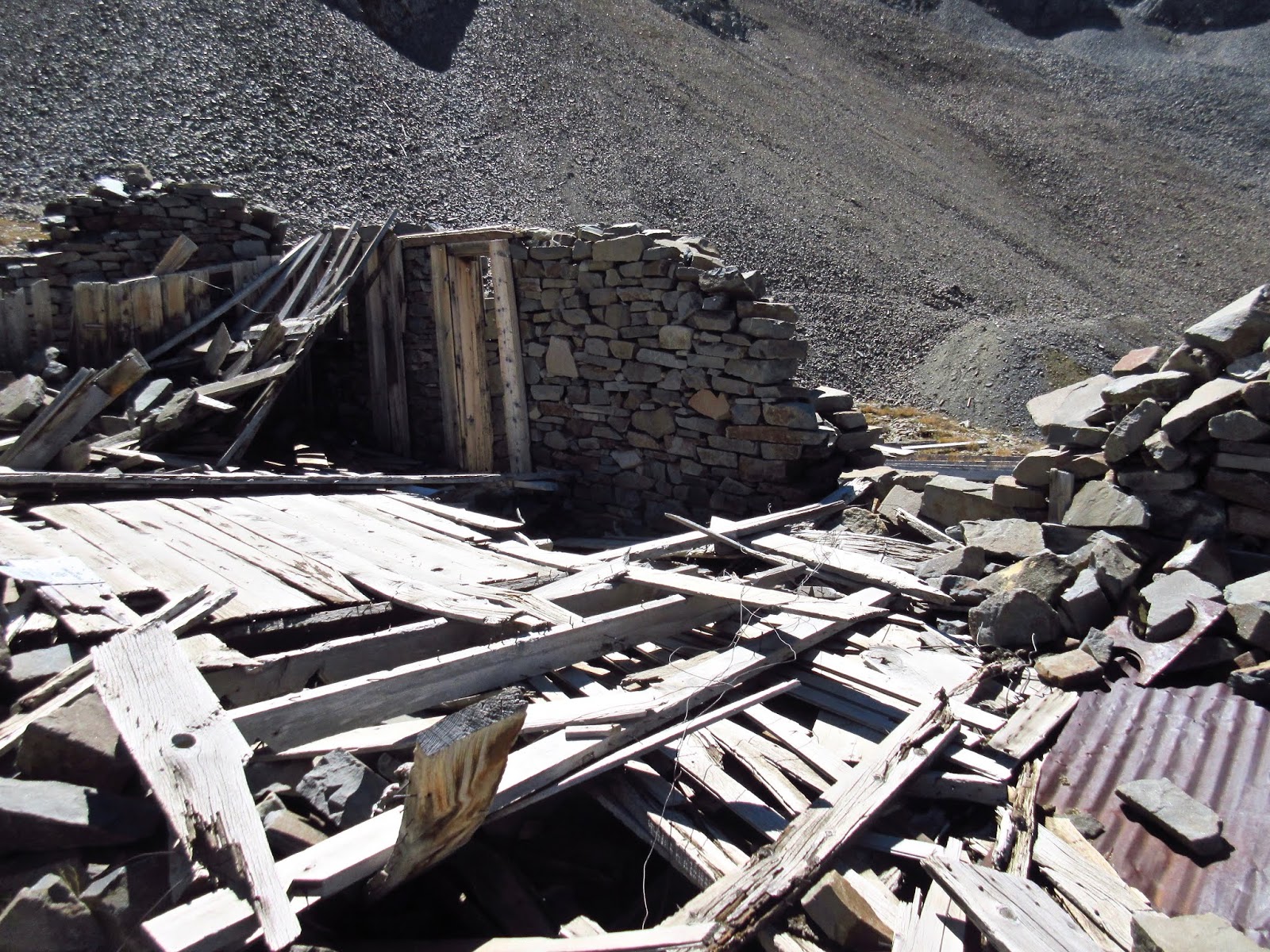 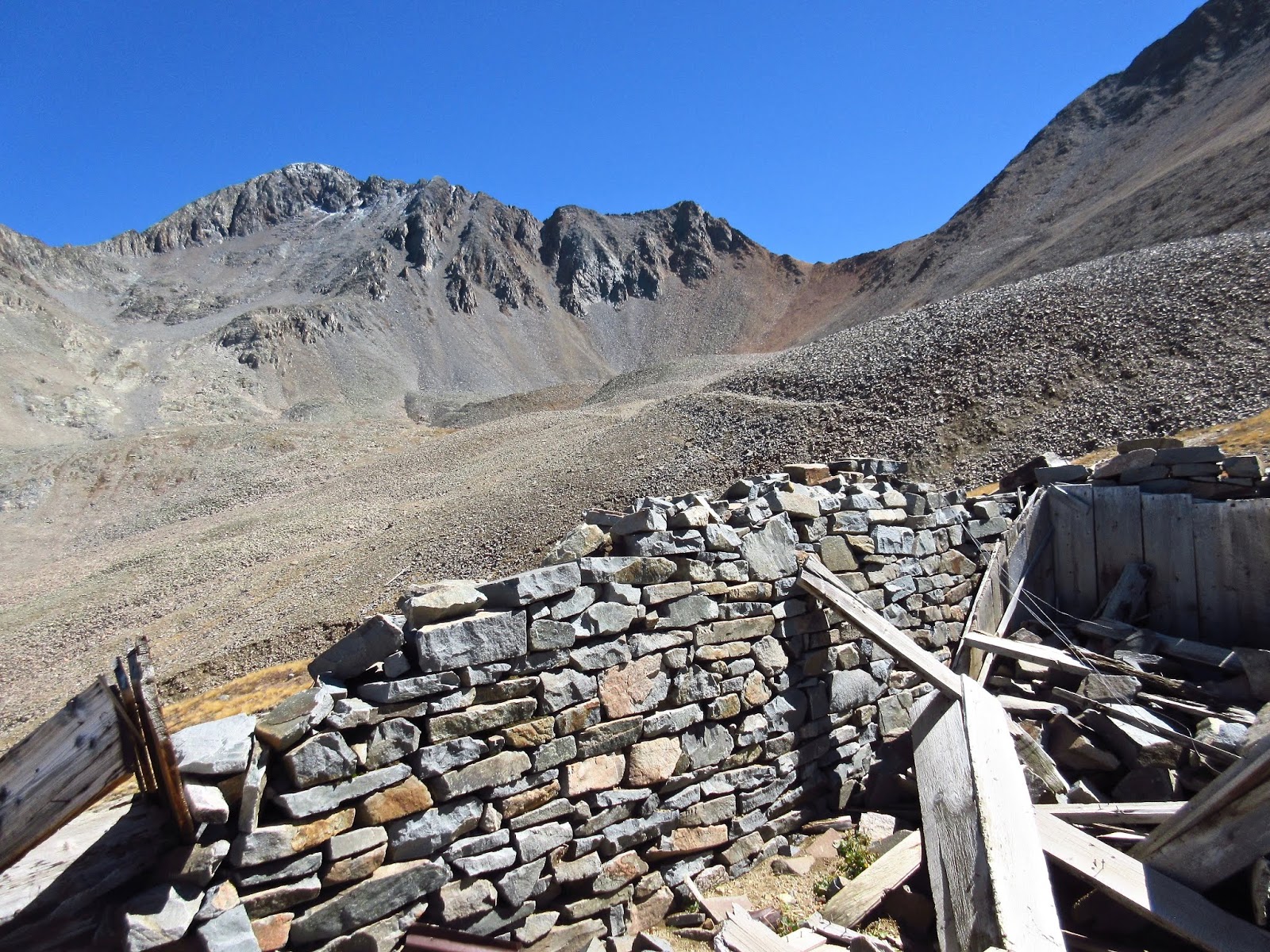 Above the crumbling wall of "Stone House," above the unimaginable tonnage of tipsy moraine rock, a saddle and ridge beckoned. But shadows grew long, while time and energy grew short. 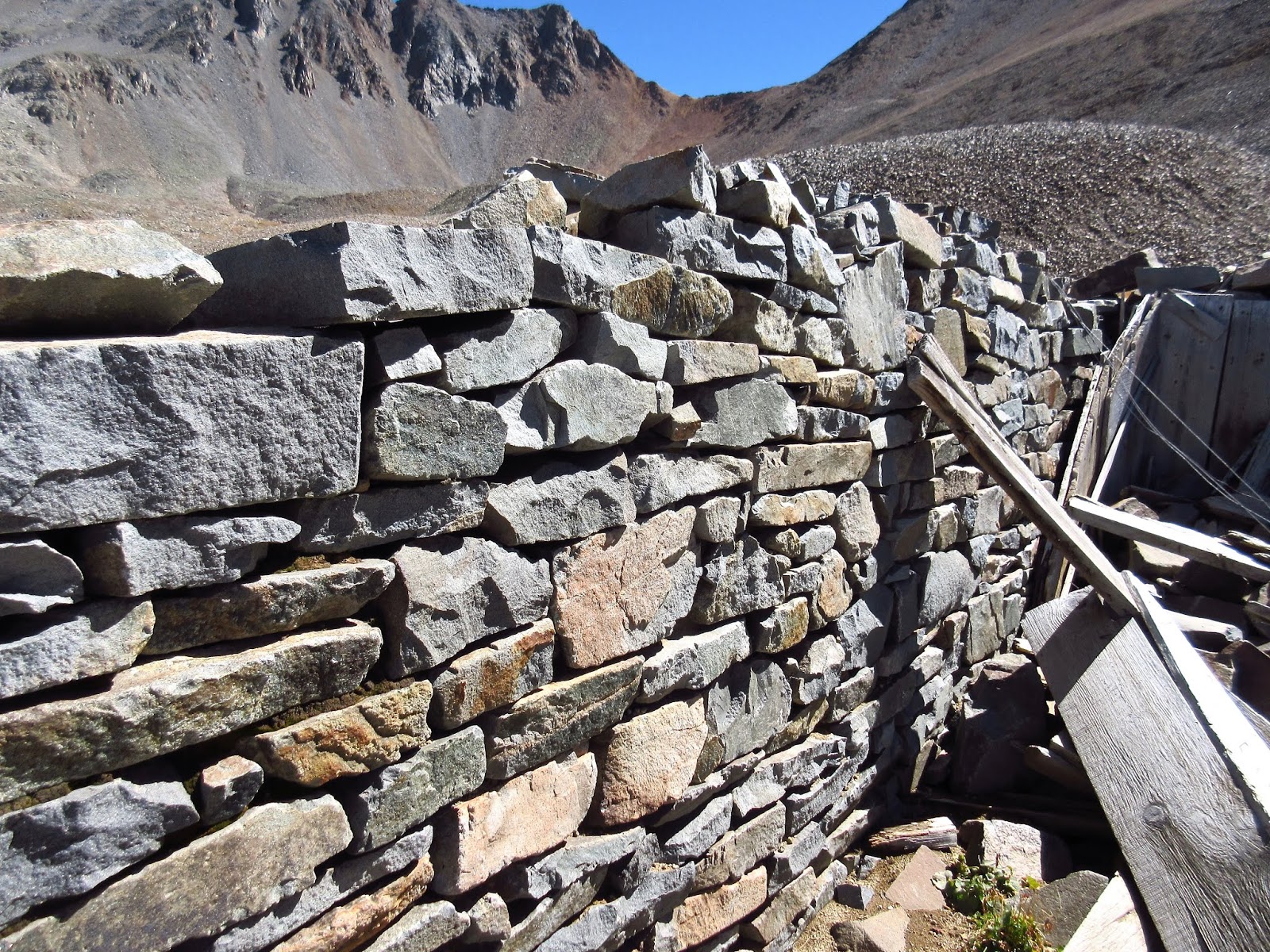 Regrettably, a reprise of Wilson's saddle and ridge was not to be. We began the heavy-footed trek down a long and winding road, to a long and winding trail...all of which seemed longer and more difficult than the one we came up. Sometimes anticipation is the best fuel...


Now flashback to 1983, when we climbed Wilson Peak in a Lightning storm....

Moody clouds and fierce, unpredictable lightning flashed all around us as we tackled the ridge to Wilson Peak. Admittedly, there were times we cowered behind rocks, crossed fingers...maybe even prayed. You would too had you been there.

In all the sinking, swirling clouds we lost sight of the summit.  Climbing blind, it didn't take long get off track. Finally, cliffed out on a ledge, we backtracked to a patch of snow that had footprints. We followed their direction and eventually found a cairn. The ridge became too technical for Bobbie's old dog and constant companion, Max. She told him to "Stay!" and he did. We pushed on, following cairns and looking for a summit that was lost in clouds. And God, did I mention The lightning!

There is disagreement between us as to what ultimately happened on Wilson Peak. In my mind we made our way to a point just below the summit...less than 50 feet from topping out and signing the register. But lightning was letting loose like the forth of July...only with the odor of ozone instead of gunpowder. I was, quite frankly, scared shitless. All I wanted to do was to find Max and get the Hell down!  It is my belief that we called it "good enough" just short of the summit. If not...if indeed we did reach the summit, what fools we were.

Not wanting additional exposure on the ridge route, Bobbie and Max followed a few hikers who fled the mountain straight down a precipitous couloir of tumbling rock. I followed behind, praying that "safety in numbers" was a "thing."