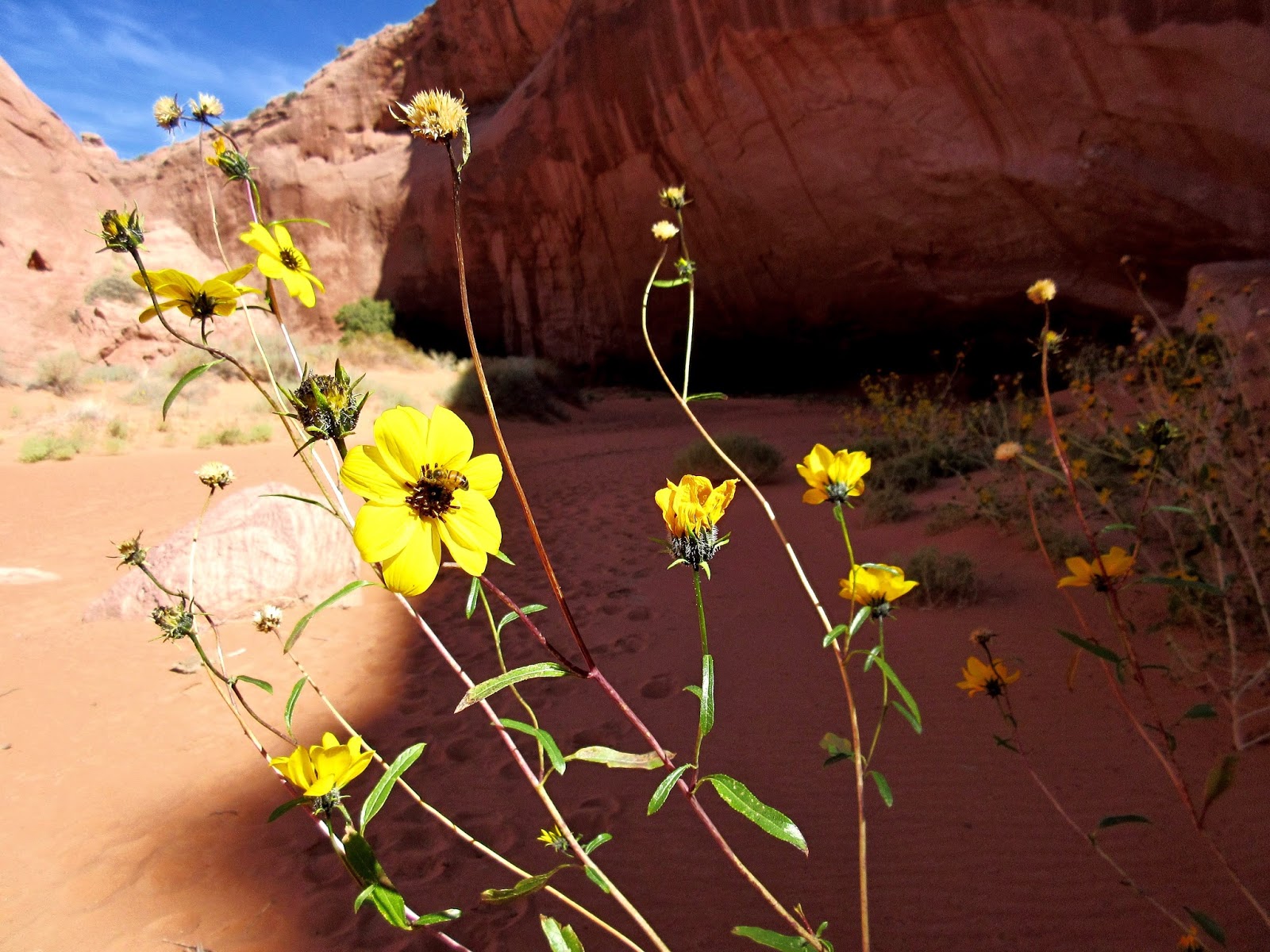 Tired and battered, we found a spot of shade in which to lunch and recover from exploring slot canyons Peekaboo and Spooky. Our mis-guidebook said Brimstone Slot was only 20 minutes down-wash, which proved false on such a sunburnt day. Anyway, I'm glad for the the author's misguided optimism because, if truth was told, we may have left Brimstone for another day...as in next year.

Ignorance being bliss, we slogged on, away from our car and down a broad wash that squeezed down to a pretty cool slot. Huh, must  Brimstone...
Not.


Of course that turned out to be too good to be true. But we took pleasure in the cool shade, maneuvered around a giant choke stone, and continued downstream, one without a single drop of water.

Someday soon, before I kick the bucket list goodbye, I'd like to see (from a safe place, of course) a roaring flash flood squeeze through a slot canyon. Man; imagine the thunderous roar, as Energy swaps gears from "Area" to "Velocity." 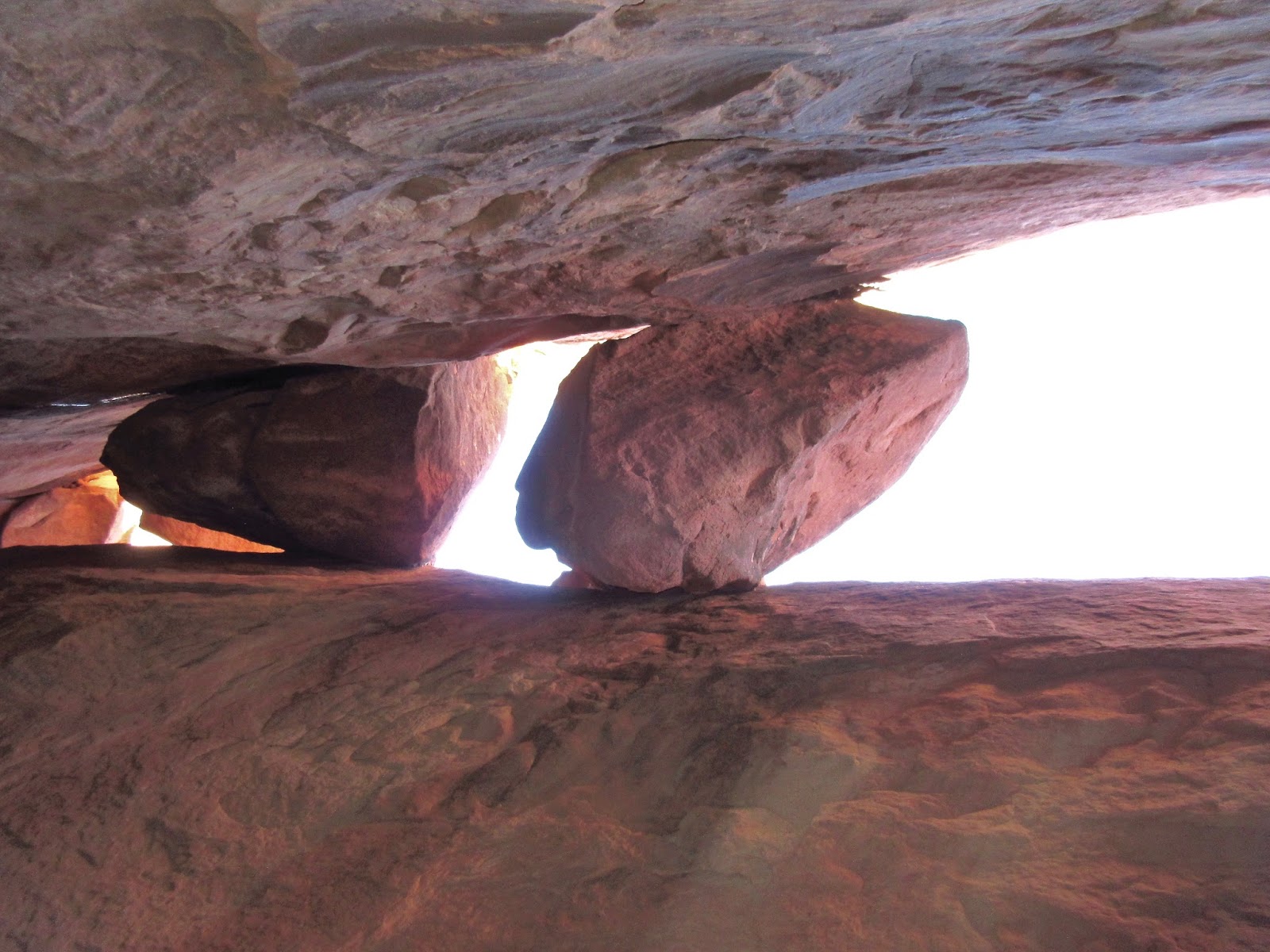 Although not as narrow, we were thankful to be out from under a bearing down sun. Looking up, five humungous choke stones were perilously wedged overhead—defying gravity, till forces of erosion–maybe today, maybe tomorrow, maybe a thousand years—suddenly sets them free. 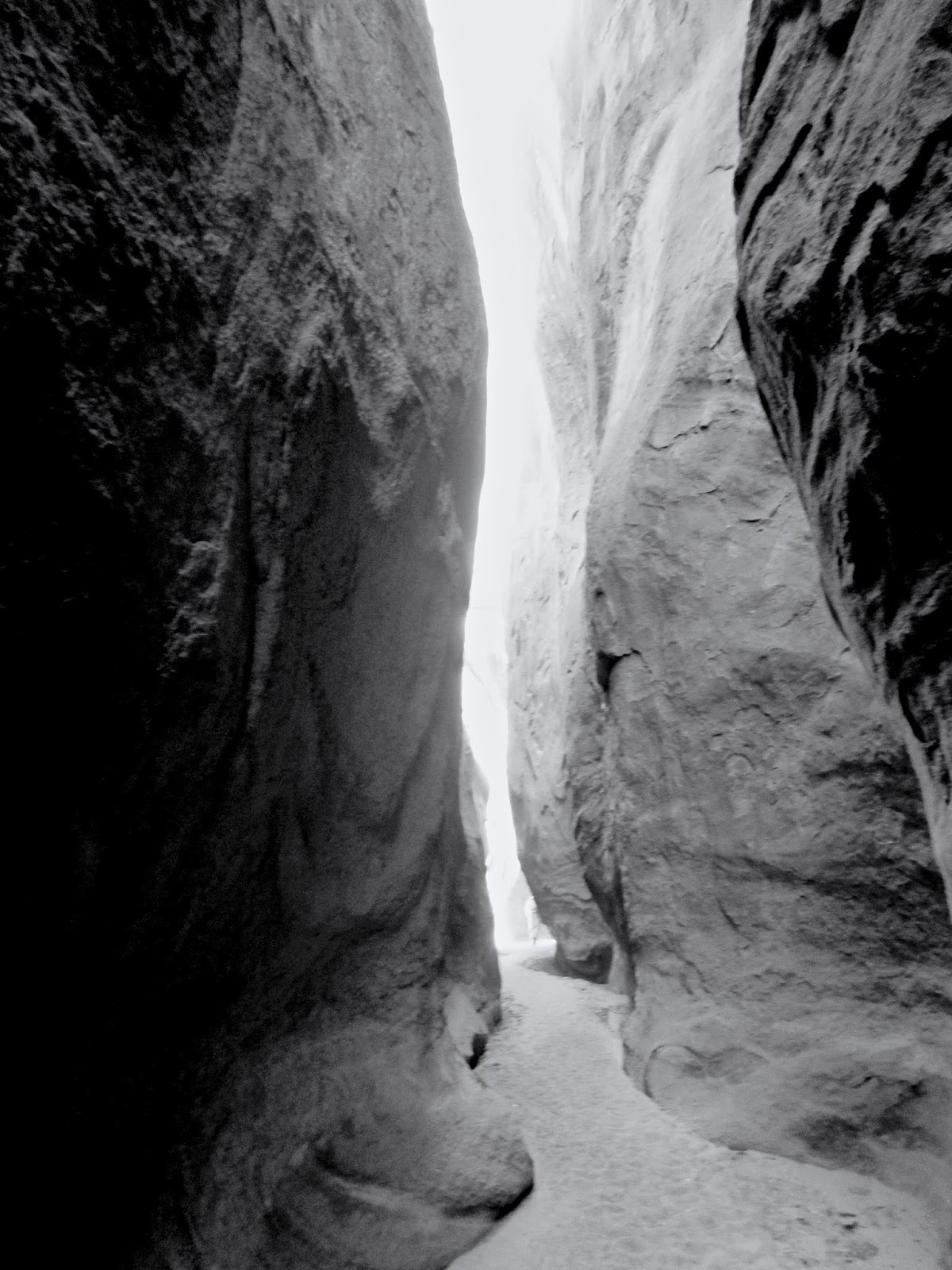 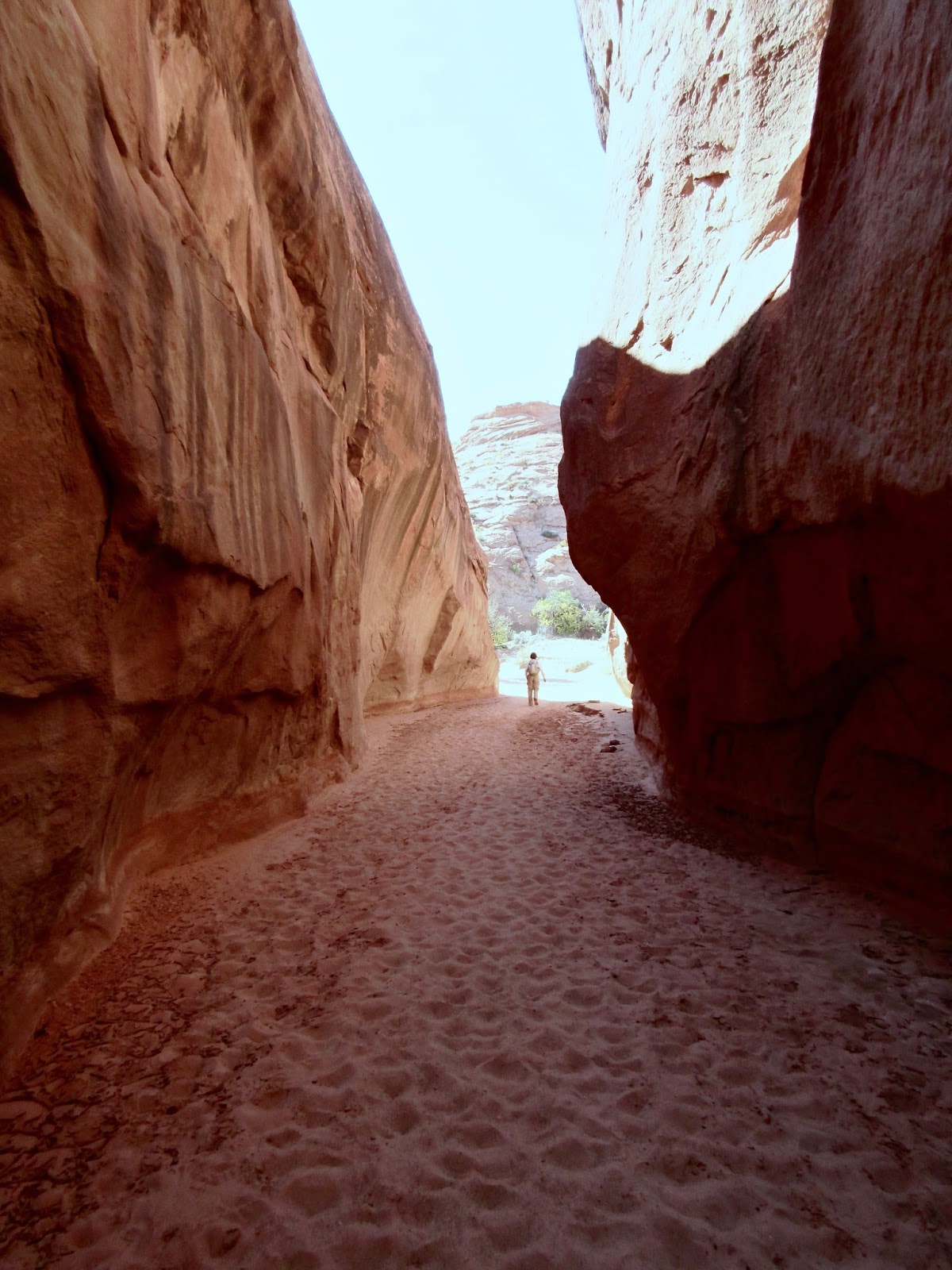 Once through the choke-stone slot, we're cast back under mid afternoon sun...wading waterless quicksand that cut our pace to something less than measurable. I swear, there were places where we questioned if we were even moving. It felt like walking in place on a sticky-surfaced treadmill. Only a few out-of-place flowers to provide visual relief in our surreal Martian-like landscape. 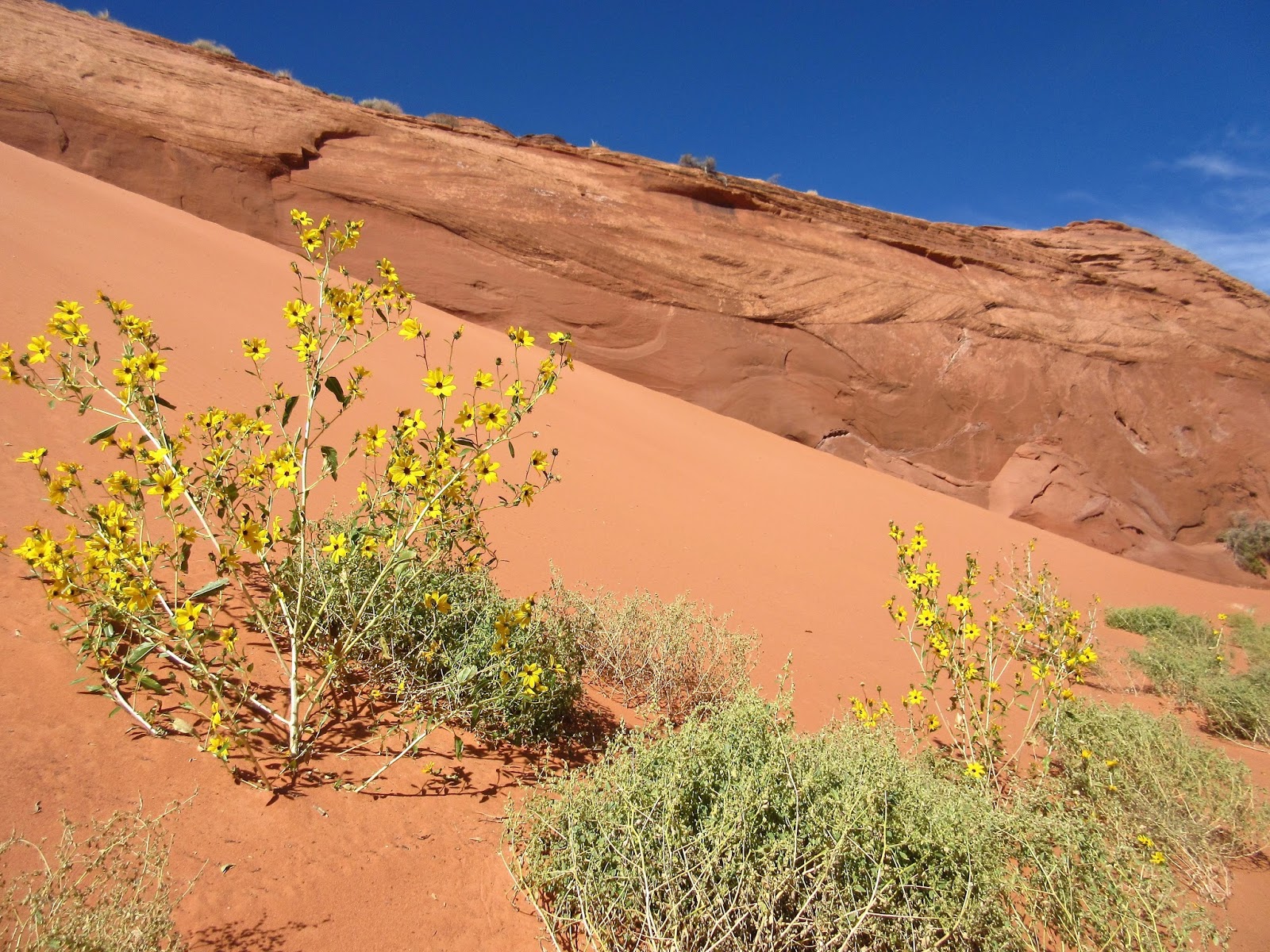 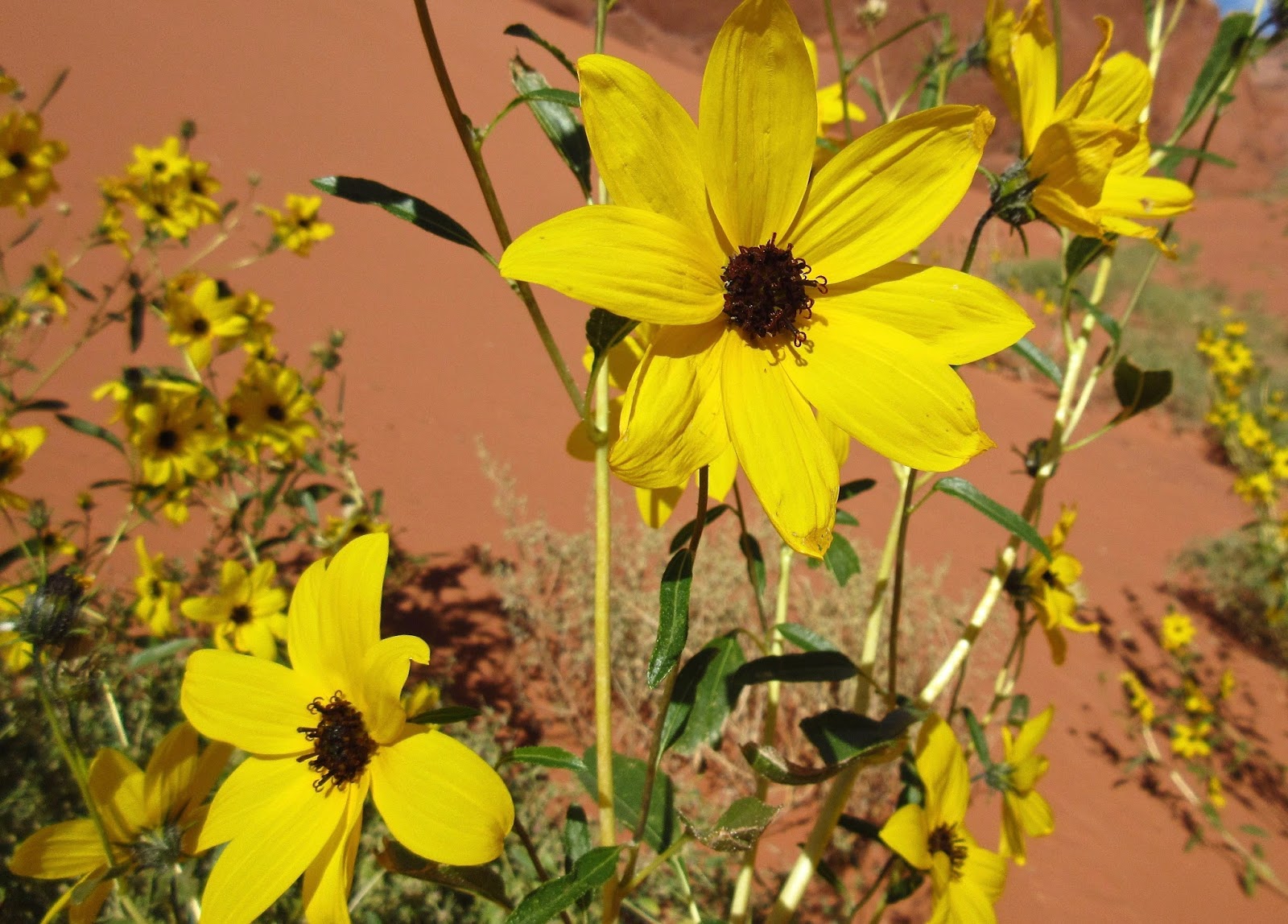 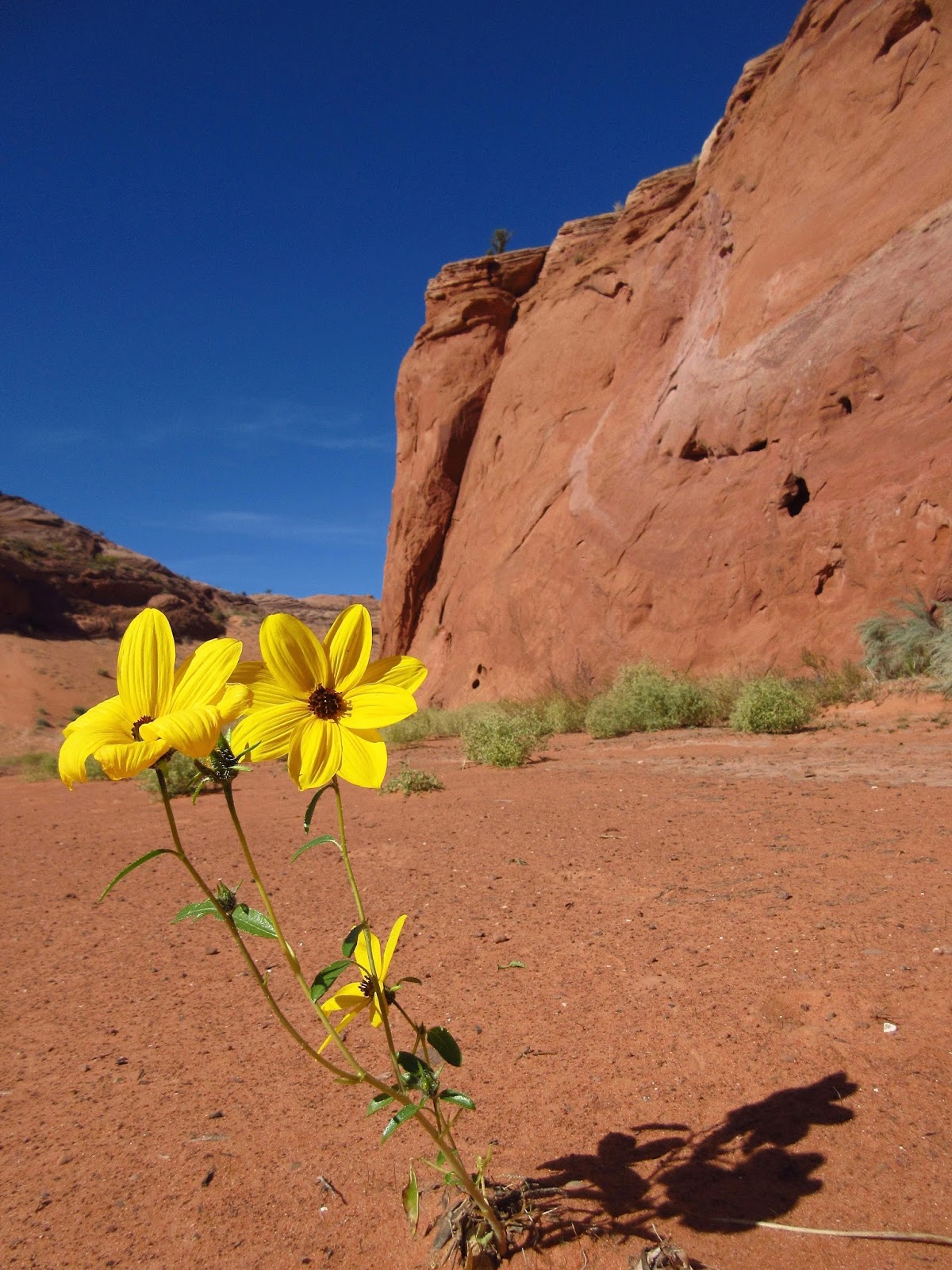 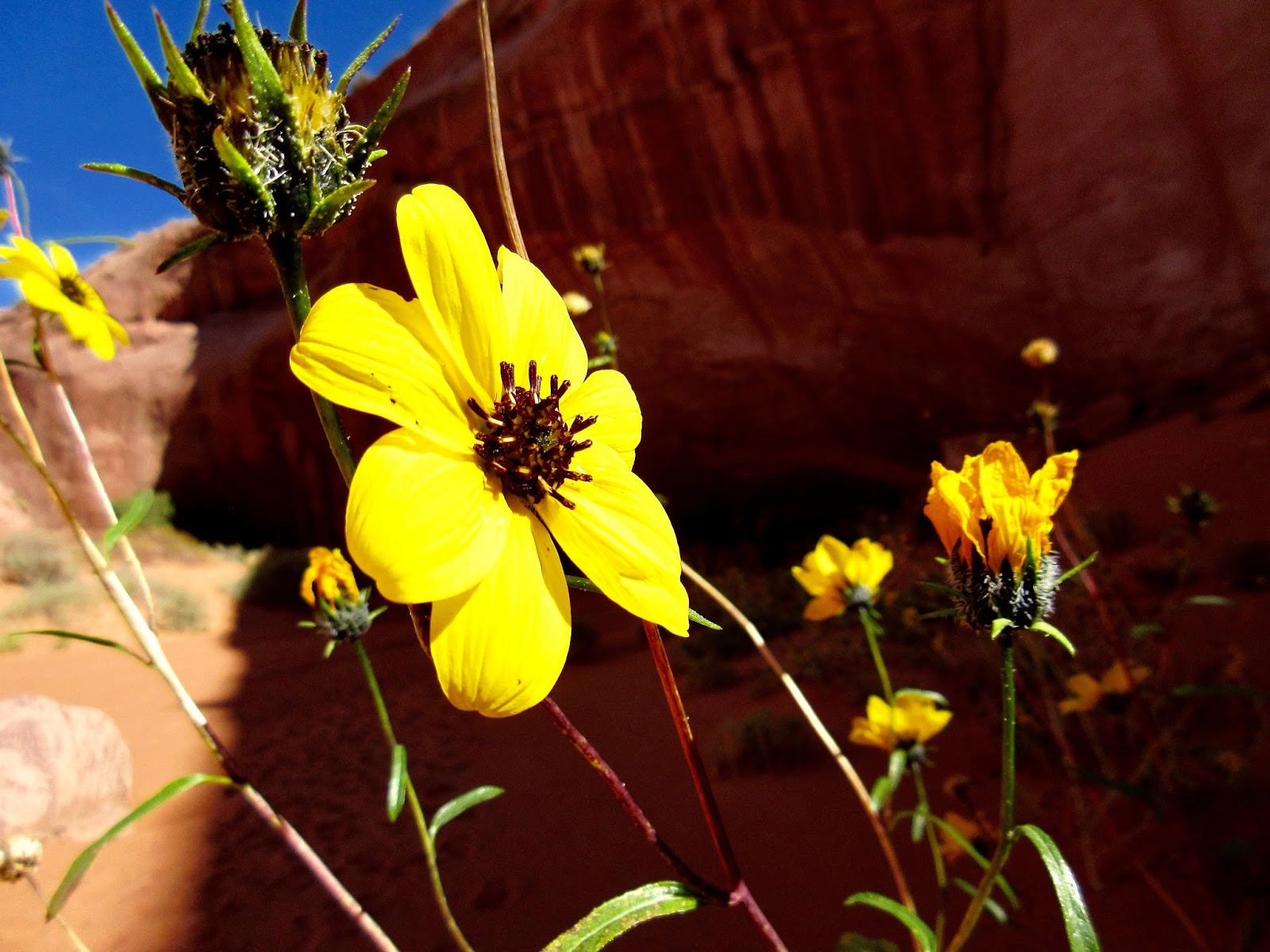 Maybe I was hallucinating; I thought I saw Louis Armstrong staring down from a canyon wall... 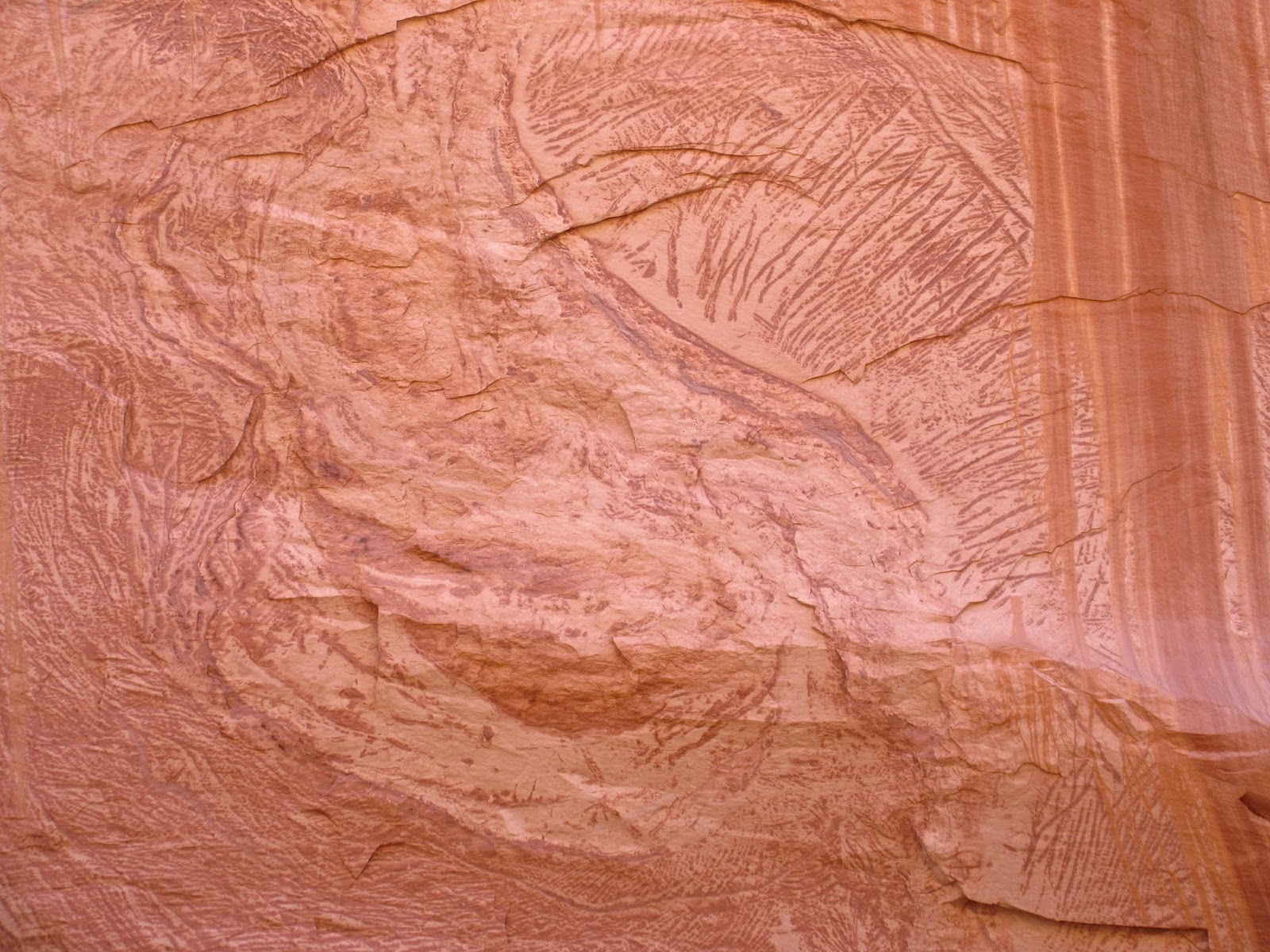 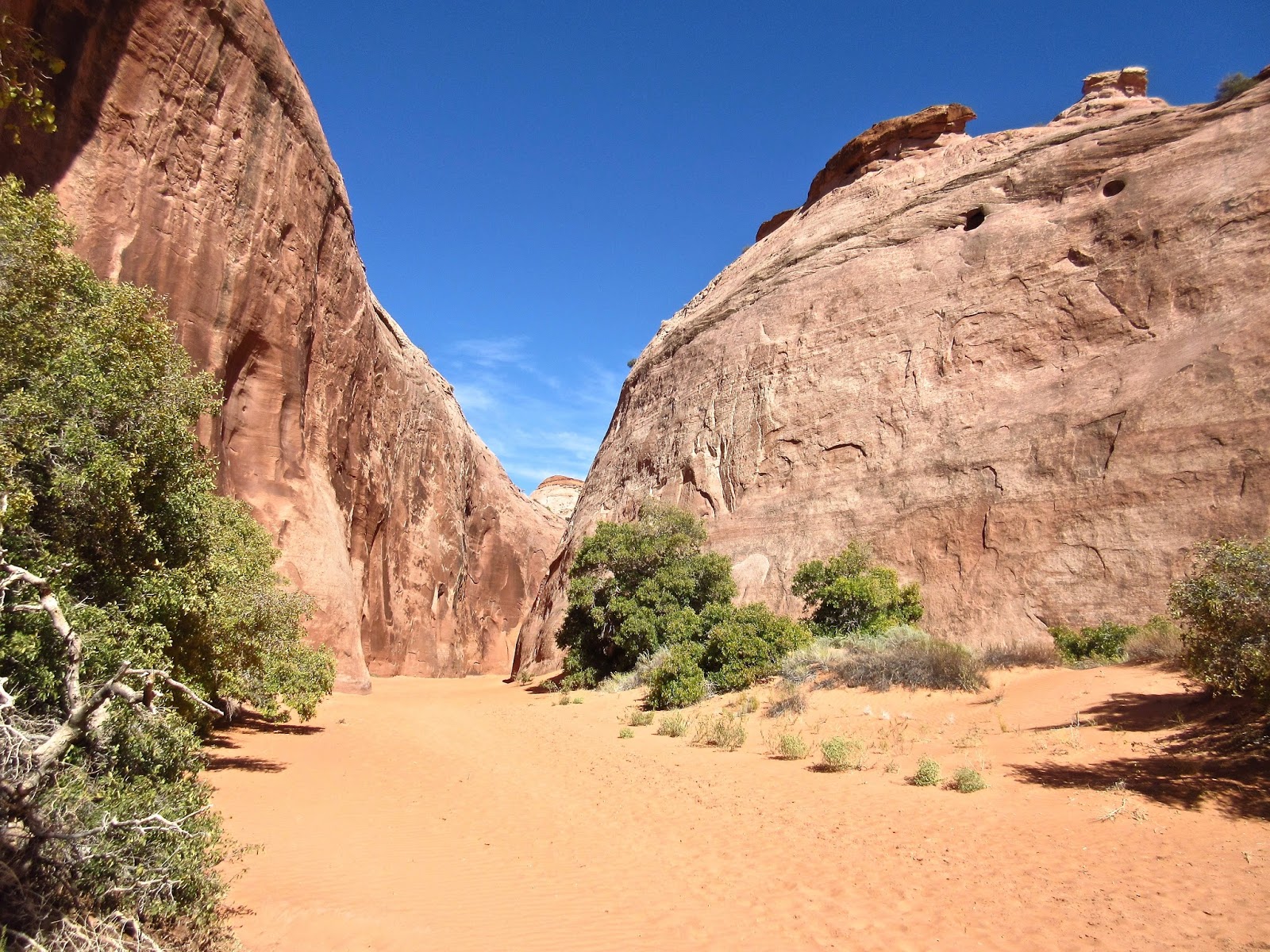 After sand-slogging nearly an hour, the canyon began to narrow again. Our mis-guidebook said Brimstone was a deep, narrow slot...so narrow that, in places on top, fools jump from one side to the other.

In order to do that, we were supposed to look for a sand ramp exit. Well, we found three sand ramps, so it was confusing as to which one to take.  Hmmmm.

It turned out to be a moot point after I tried climbing one of the ramps...sand fine as dust made a stationary treadmill out of the slightest grade. We decided to go into the slot instead of jumping over it. 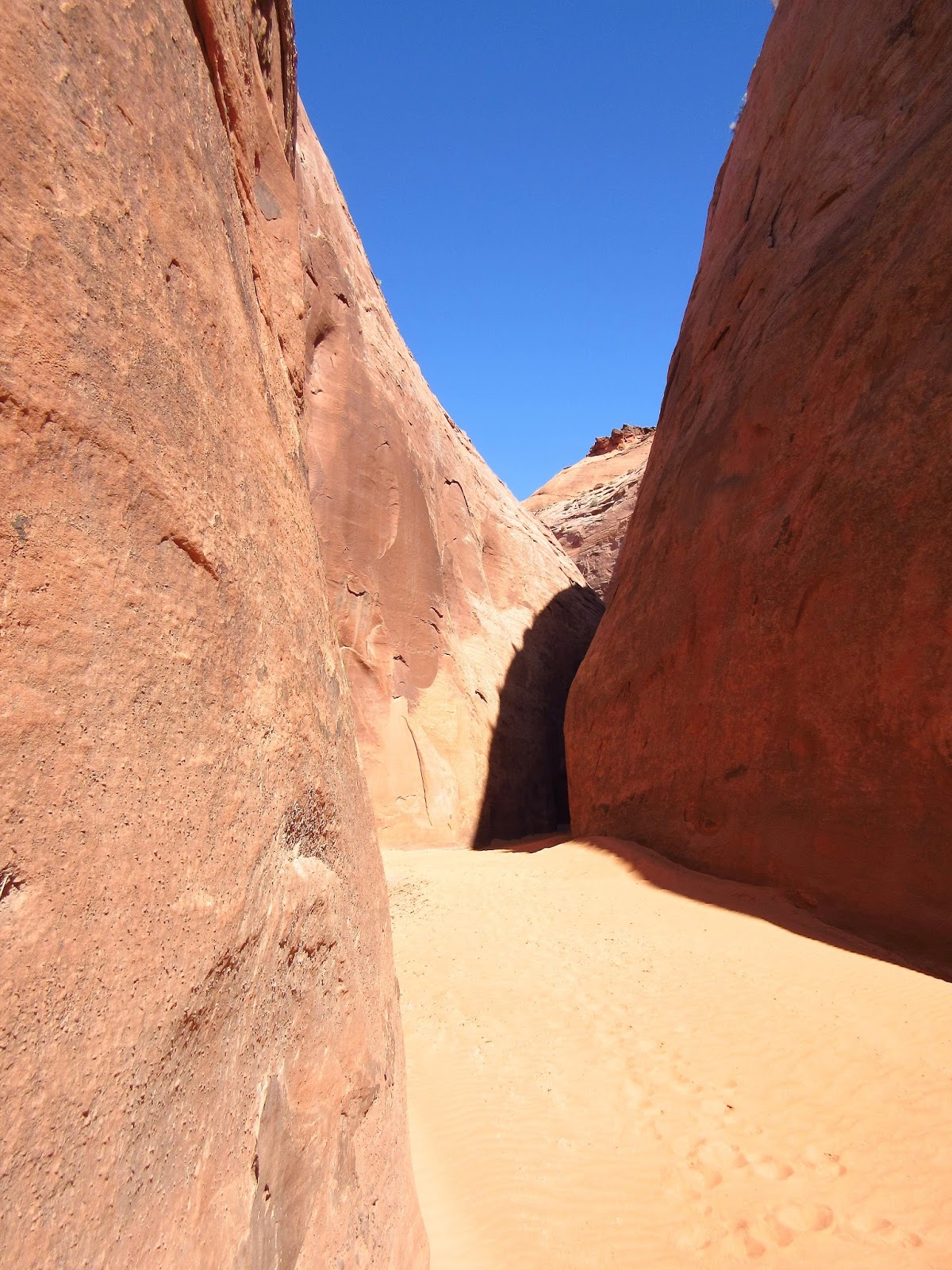 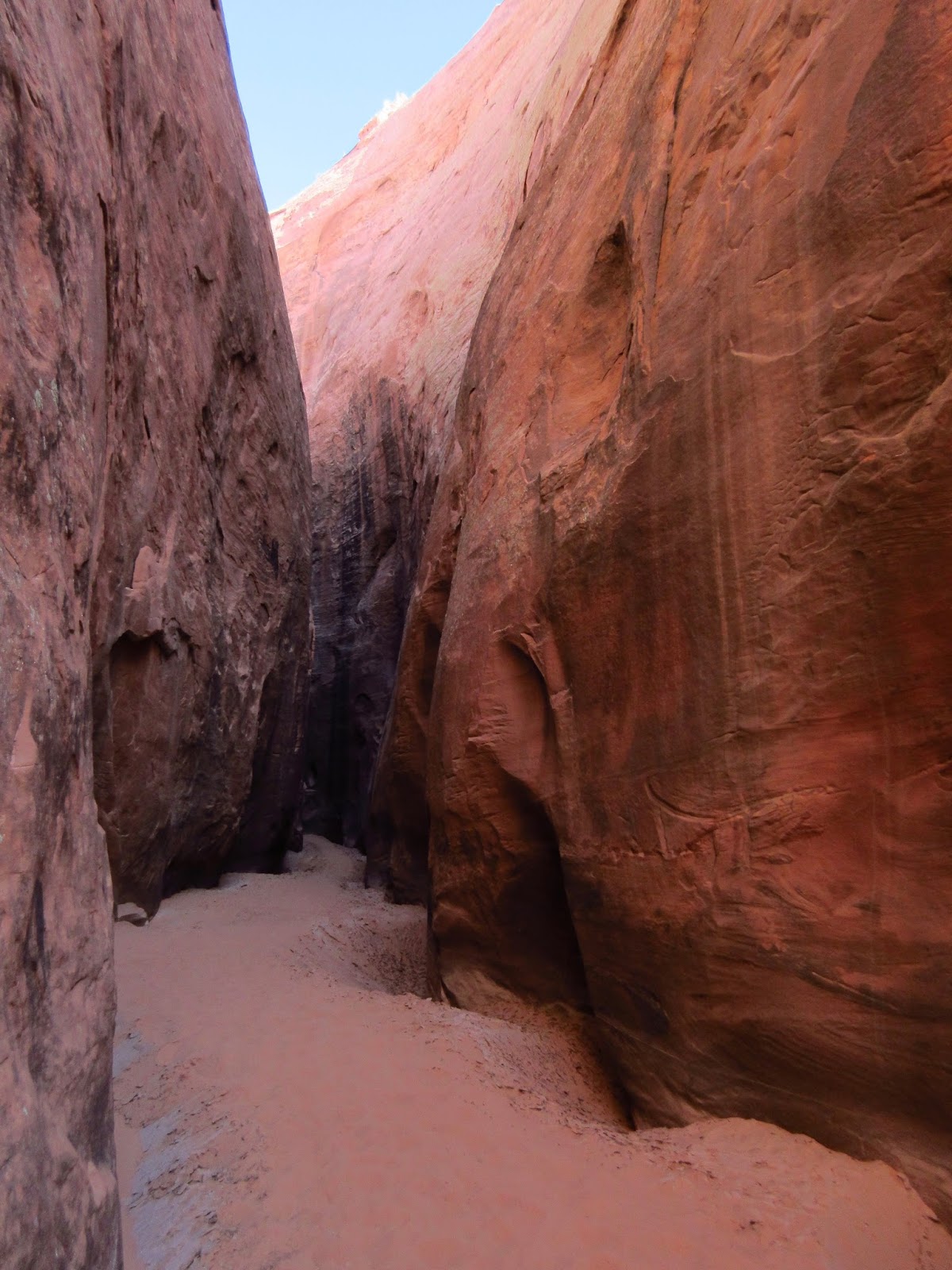 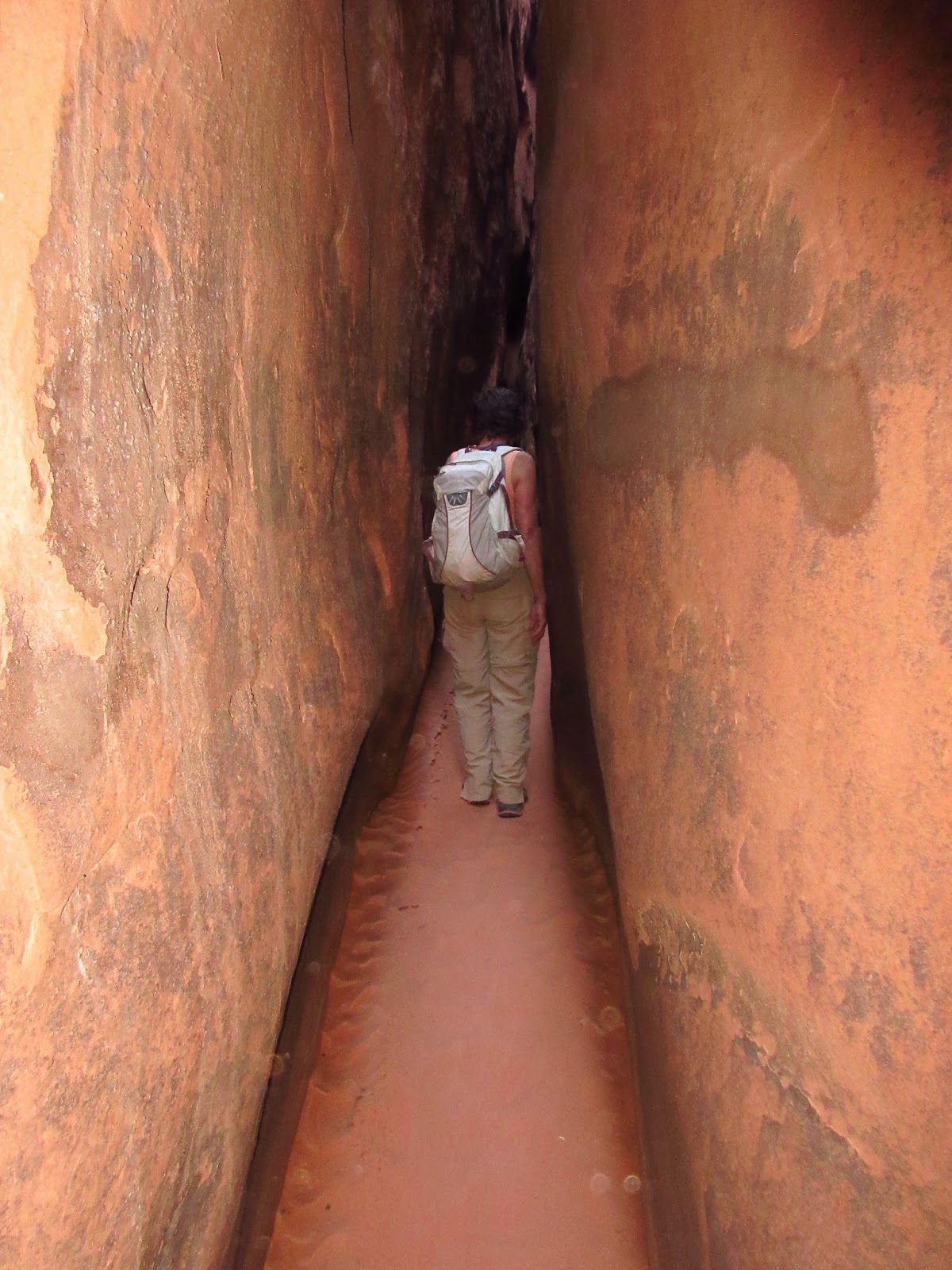 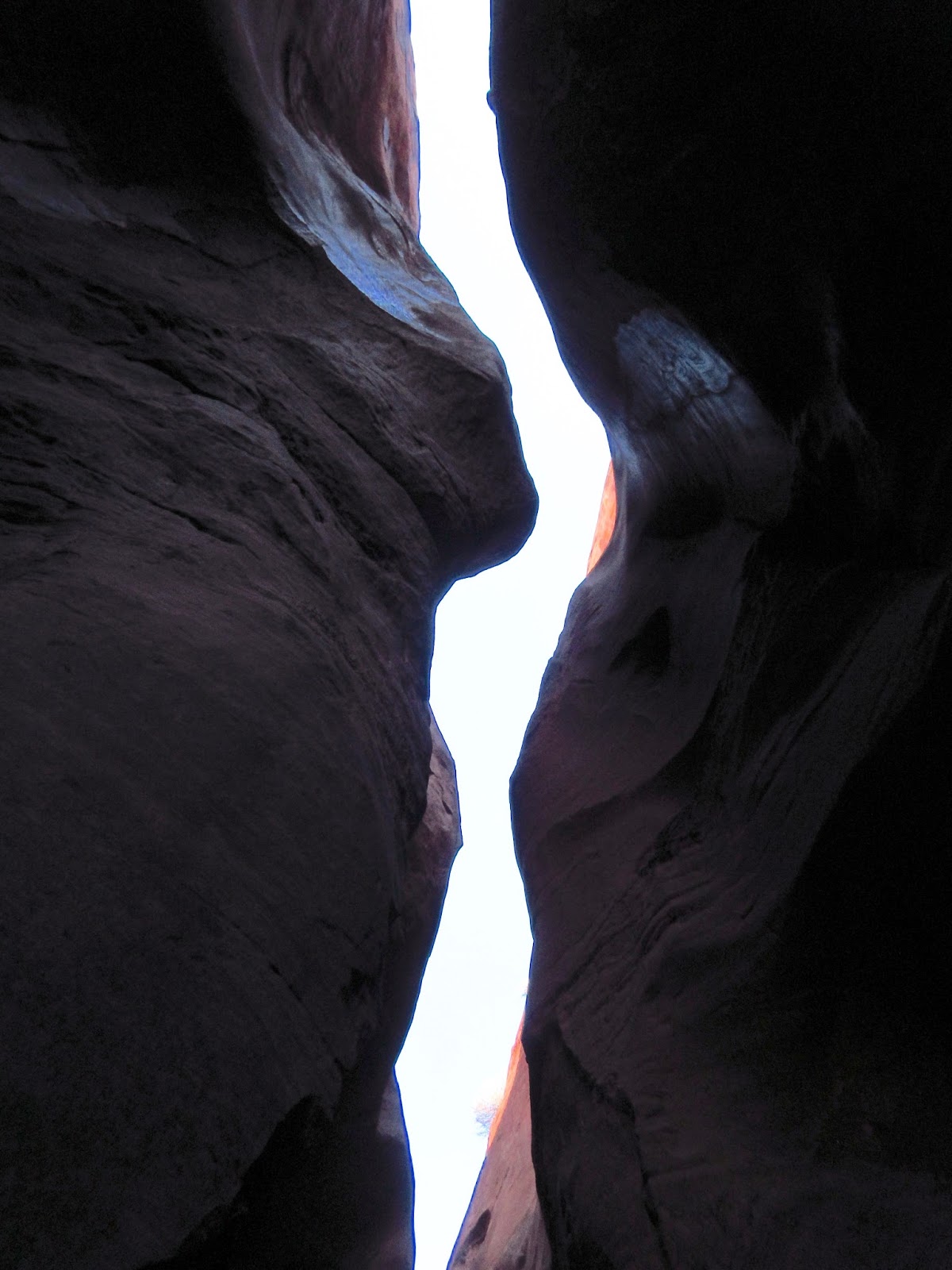 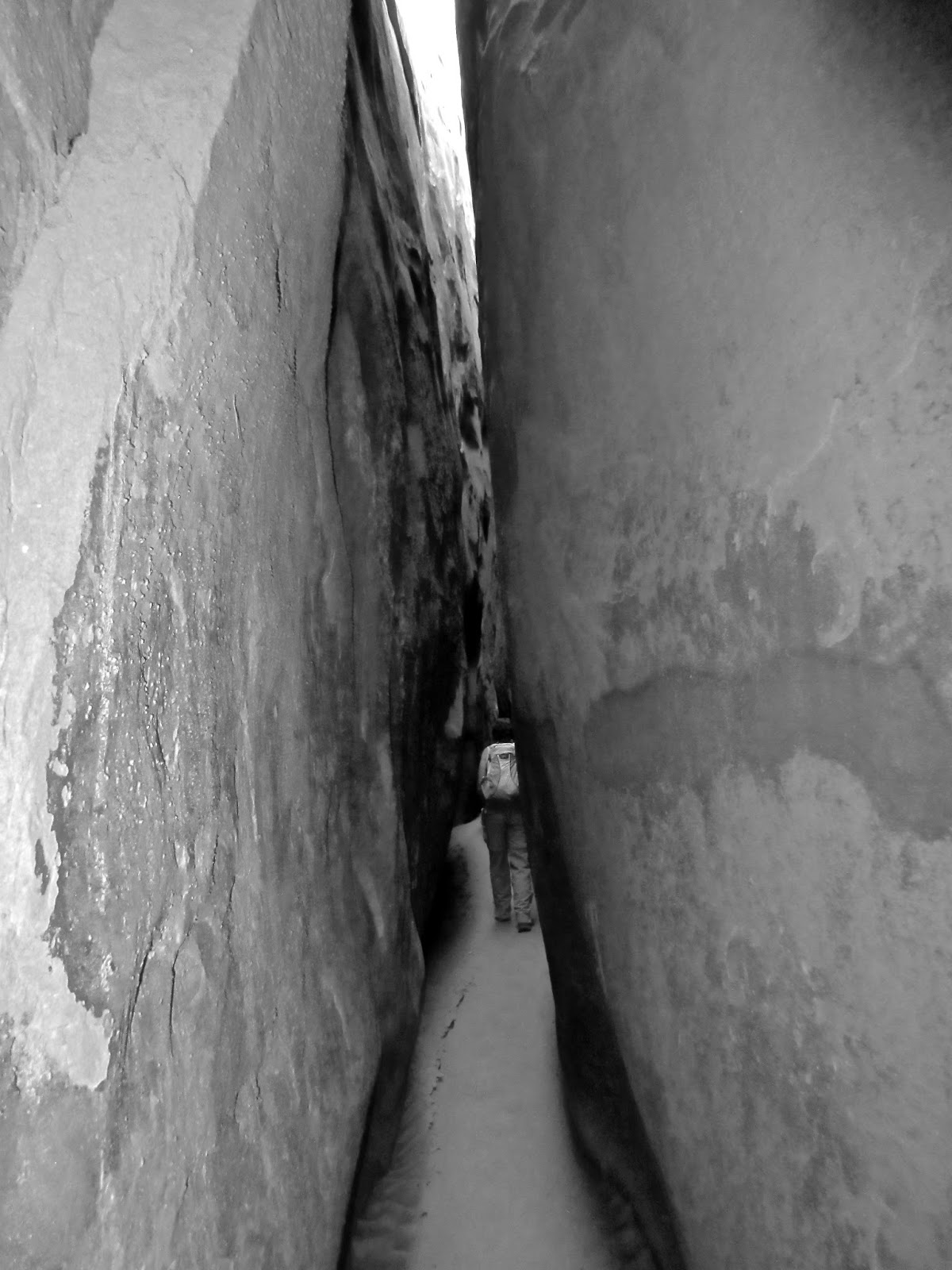 We struggled with contortions necessary to navigate a corridor from Hell...without the heat, mind you and thankfully...which is another way of saying, we're in Heaven. 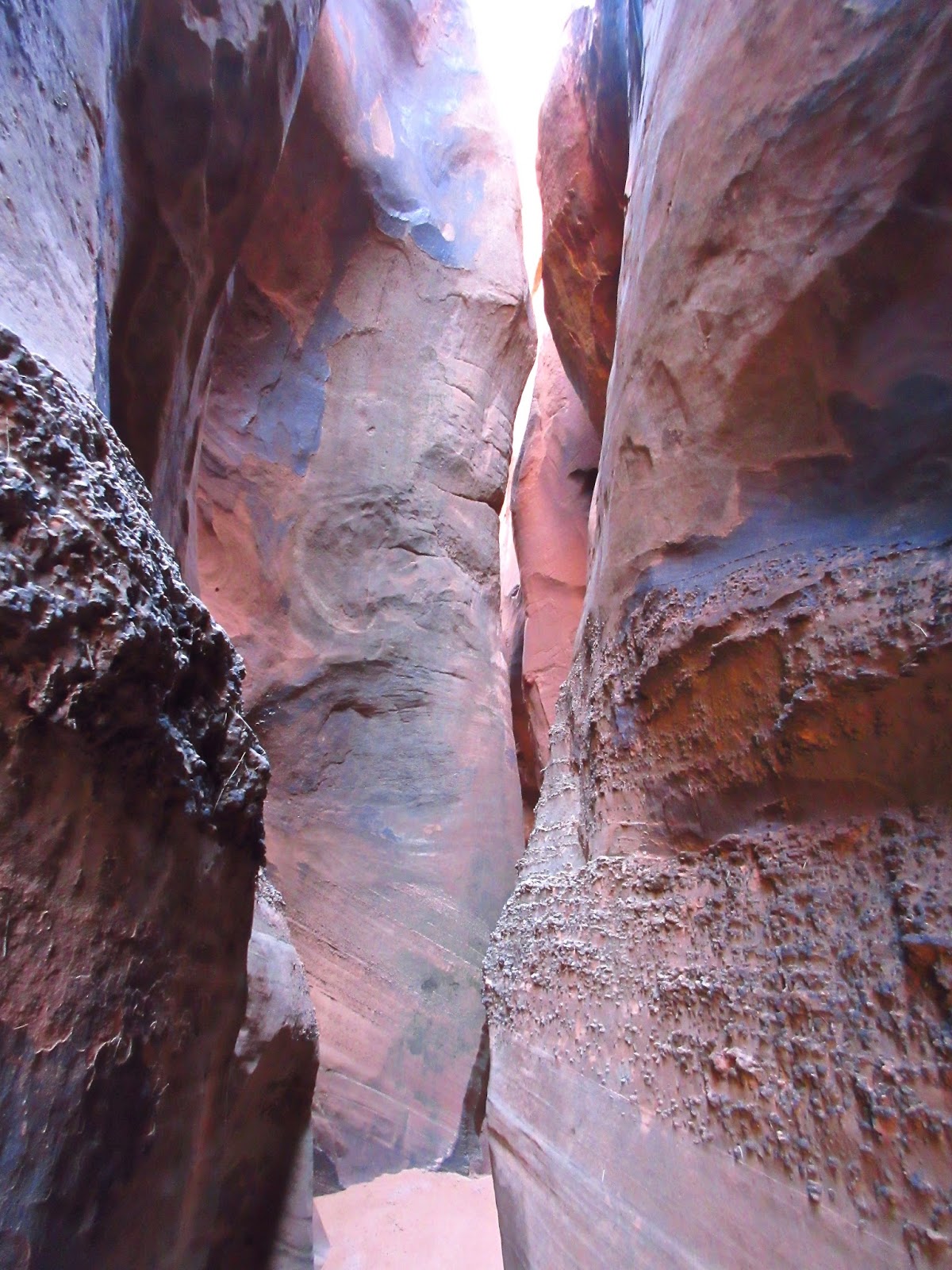 A two dimensional photo doesn't convey the 3-D essence of Brimstone or any slot canyon. Photos don't grasp the depth, scale, light, detail, atmosphere...the random, beautiful twists flash floods carve through rock, revealing layers of time. Time. Another thing that's difficult to grasp. How long did it take to carve to this depth? My mind throws a "curveballs" in such places. What about the Grand Canyon...miles across and over a mile deep?

Please. If you think you have a real grasp on that kind of time, please, feel free to try and describe it to where I understand. Then, while you're at it, if you don't mind, go ahead and explain "infinity."

We think we are so smart. Ha! The carving of the Grand Canyon does not even represent a single grain of sand on a beach that stretches from here to eternity. Yeah. So what does that say about our importance?  We are but imperceptibly infinitesimal microbes riding aboard a single grain of sand among trillions of trillions of other grains of sand through infinite space. Hardly worth a mention...not even a footnote.

“Only two things are infinite: the universe and human stupidity; and I'm not sure about the universe.” Albert Einstein 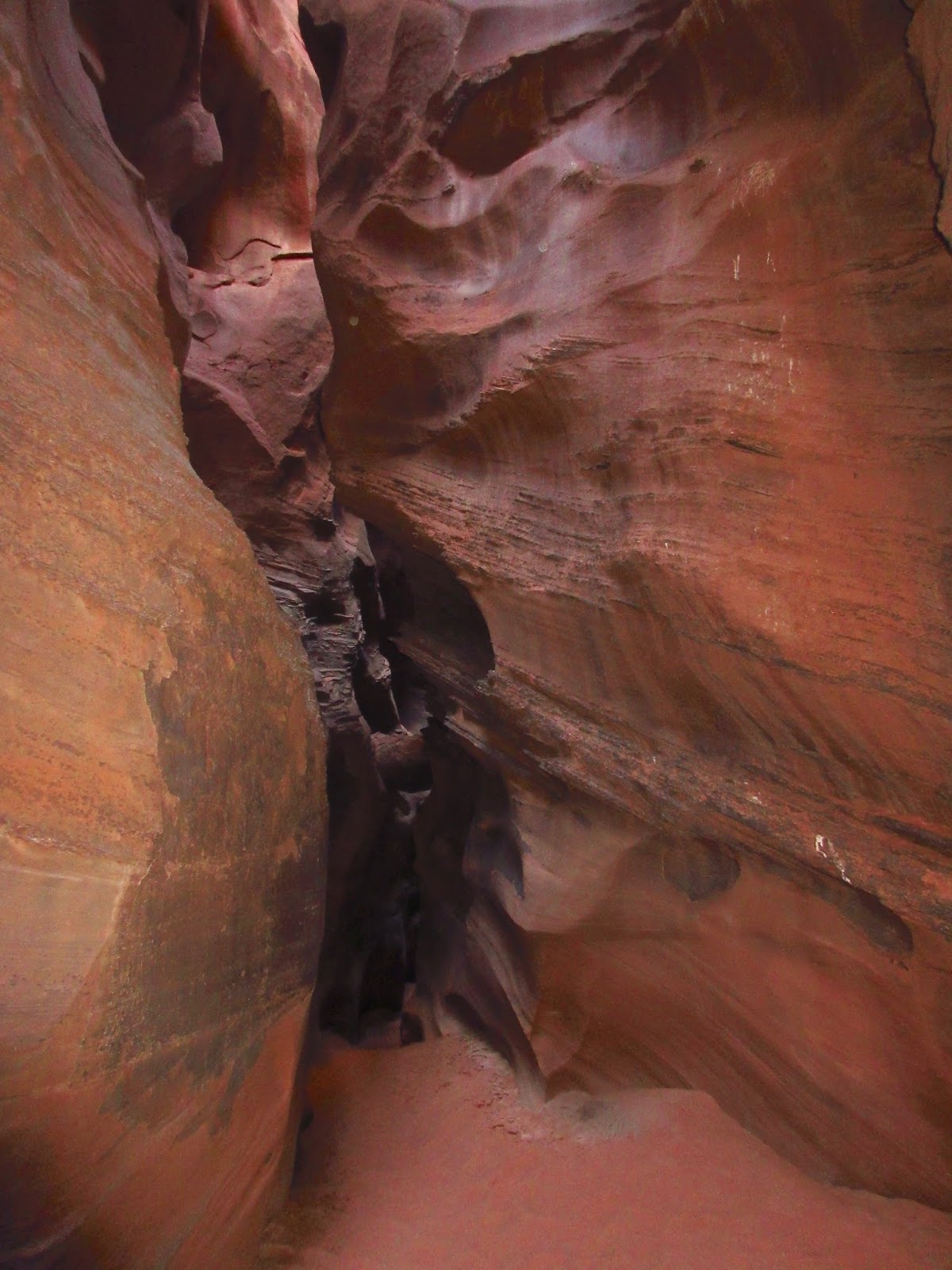 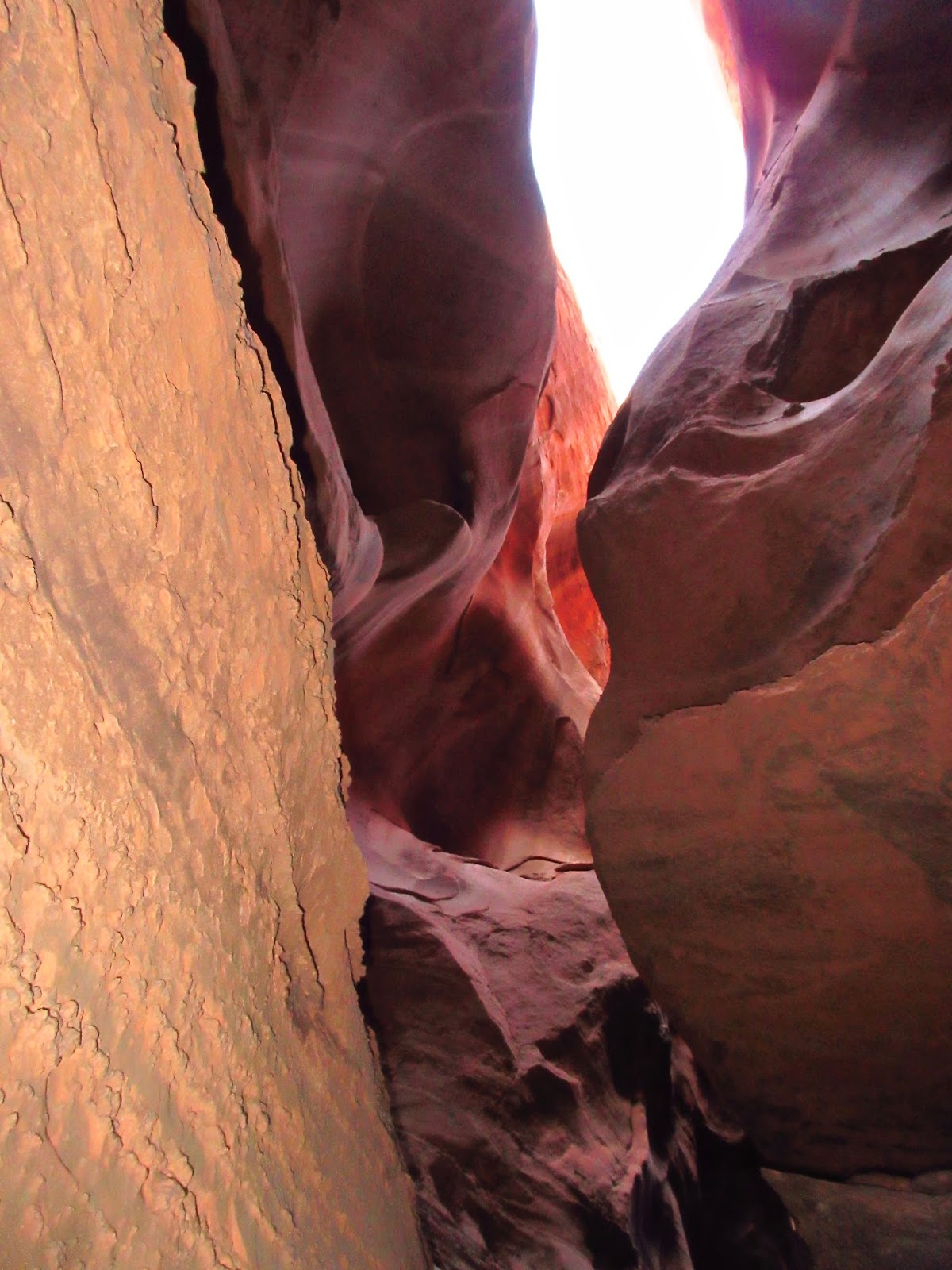 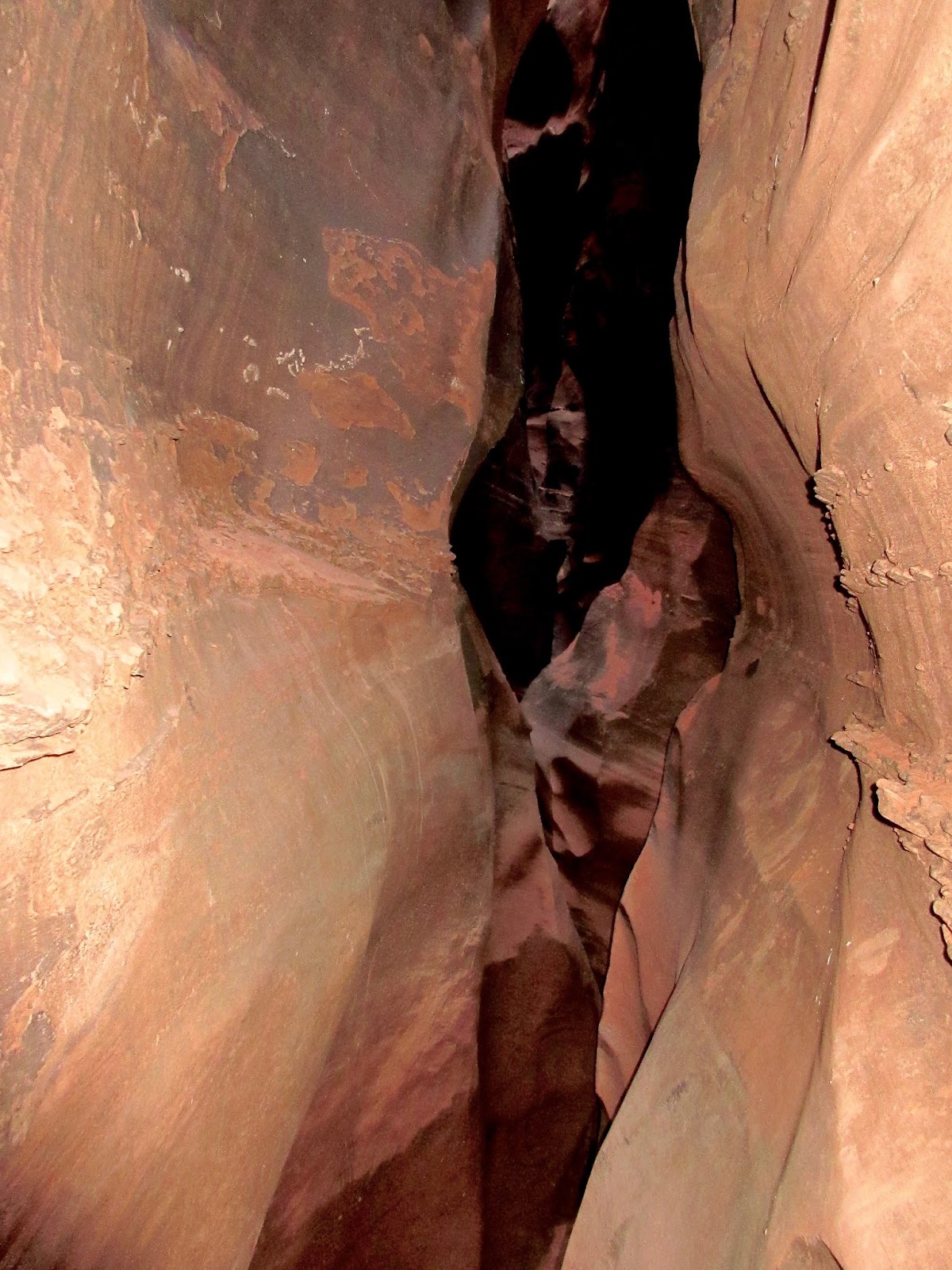 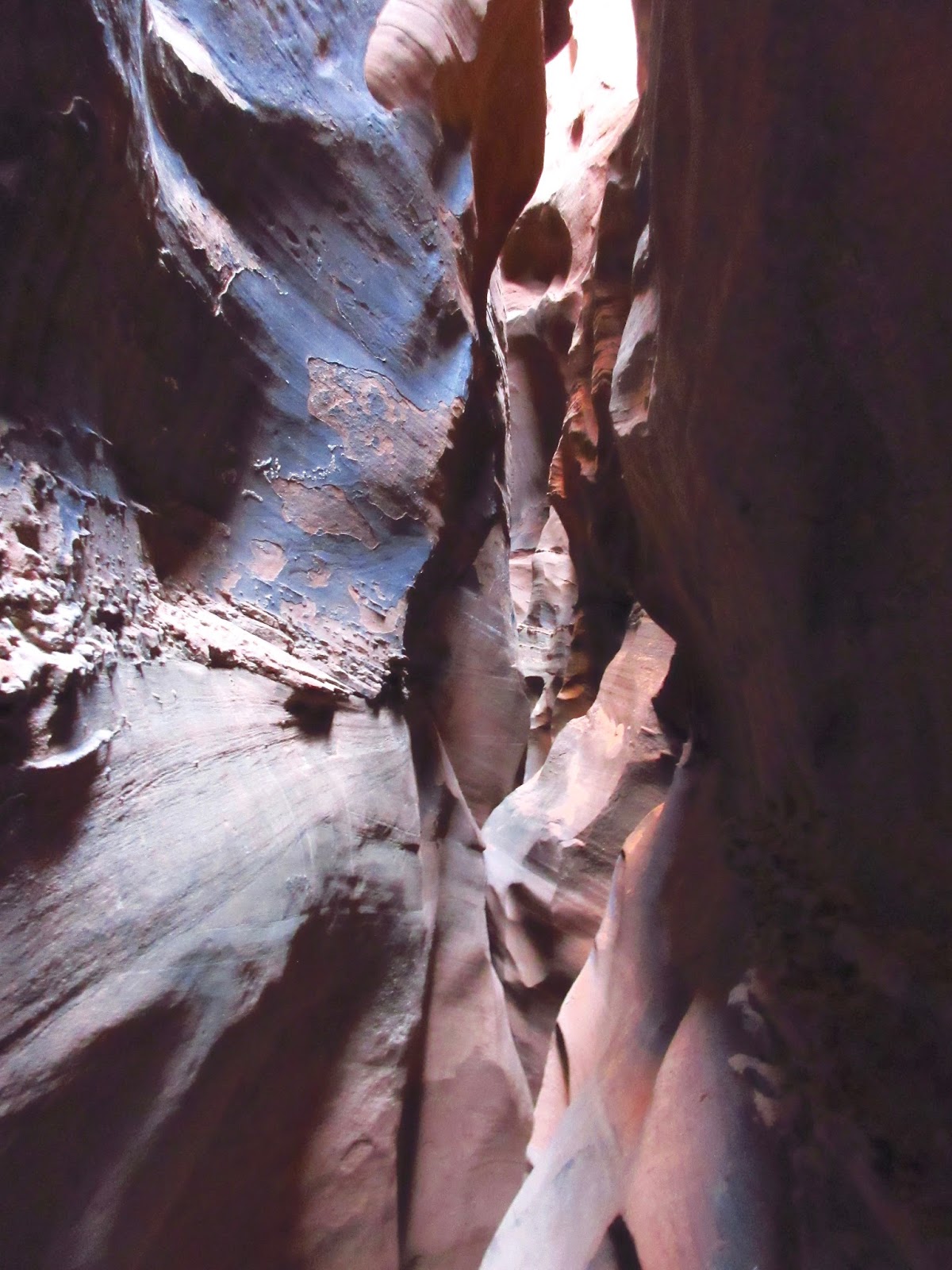 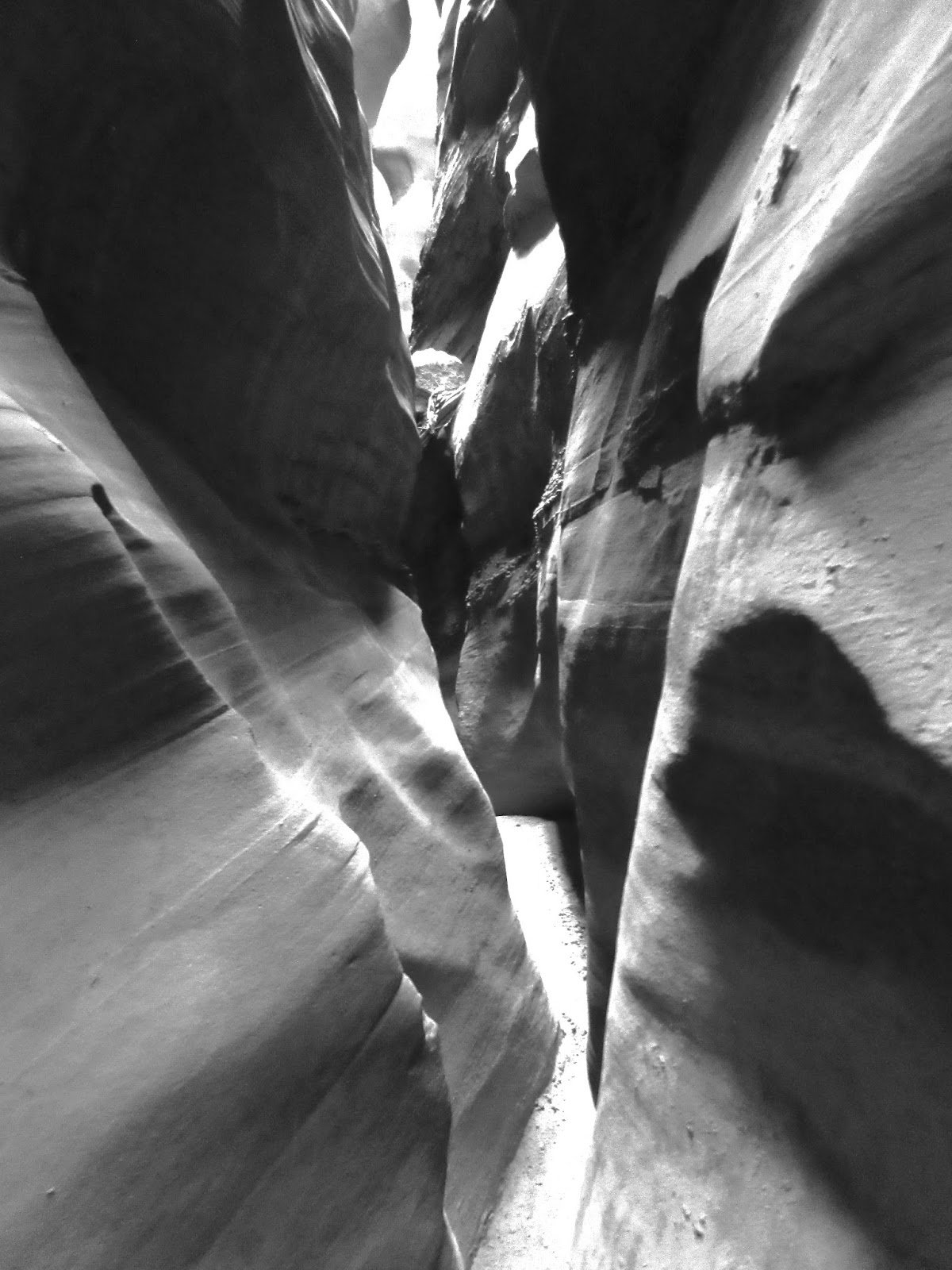 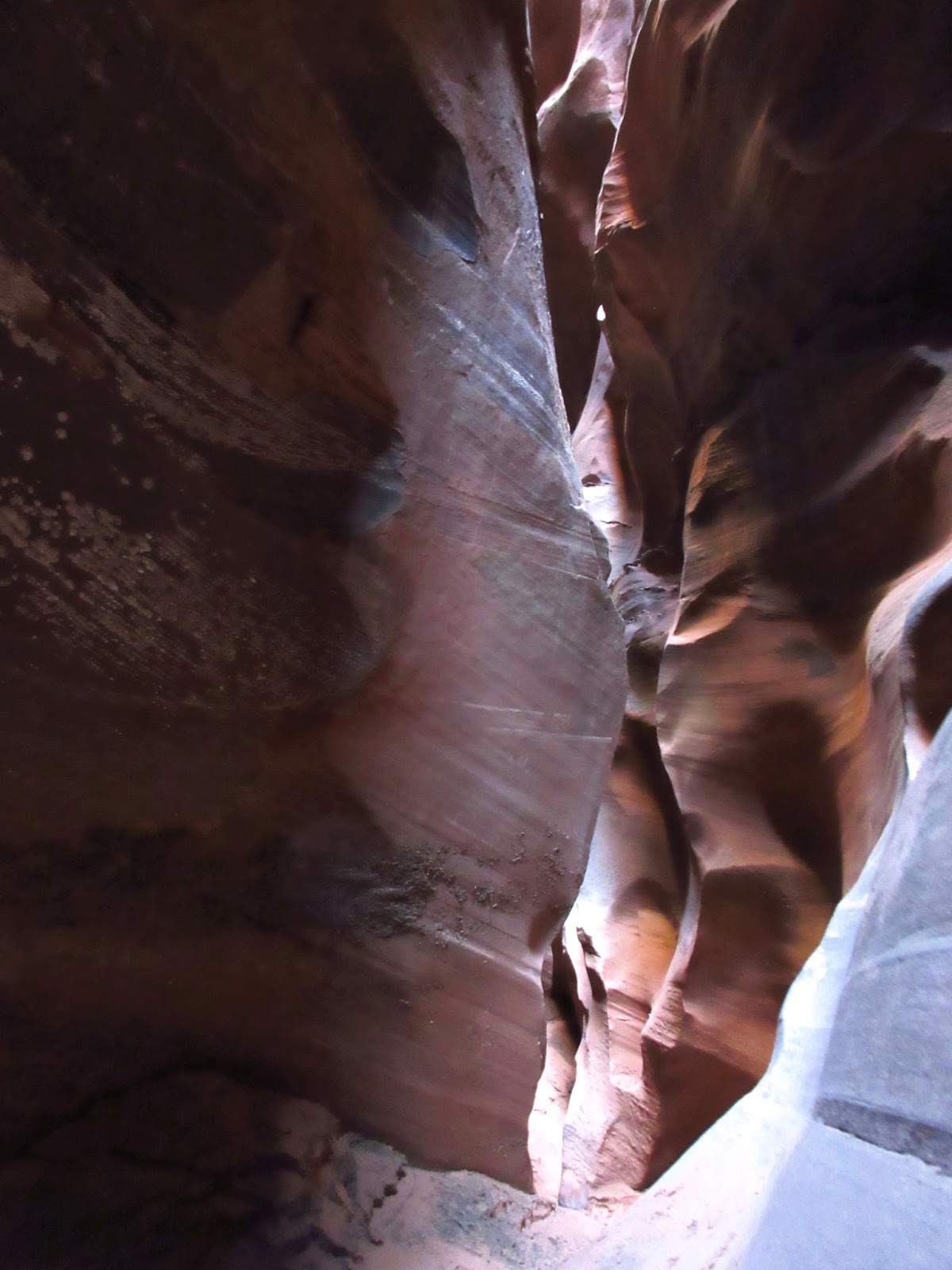 Our un-trusty guidebook said that Brimstone eventually becomes technical, that you need ropes and climbing gear and need to be prepared to wade cold water.

Late afternoon, out of water, exhausted, scraped raw and bleeding, we plodded the hot, sandy, uphill miles back to the car...greeting fresh smiling faces of pack-less hikers who smelled of either motel soap or campfire smoke... just beginning their explorations.
It never fails to amaze us...