Walking In A Winter Wonderland

When NOAA says it's ten below zero in Lovely Ouray, and The Weather Channel says it's 10 above, whom does one believe? Either way, we had a sky clear as a crystal glass bell. The temperatures were low enough to warrant consideration of long underwear and snow-pants. I decided to compromise and wore long underwear under shorts. A Mountain Man would rather freeze his "chestnuts" blue than abdicate pride.


Since the plan was to snowshoe on Red Mountain Pass, I did a quick check on the temperature in Silverton: 15 below zero. An asterisk below reads, "High avalanche Warnings in force." Hmmm. This might be one of those situations where pride goeth before the fall. 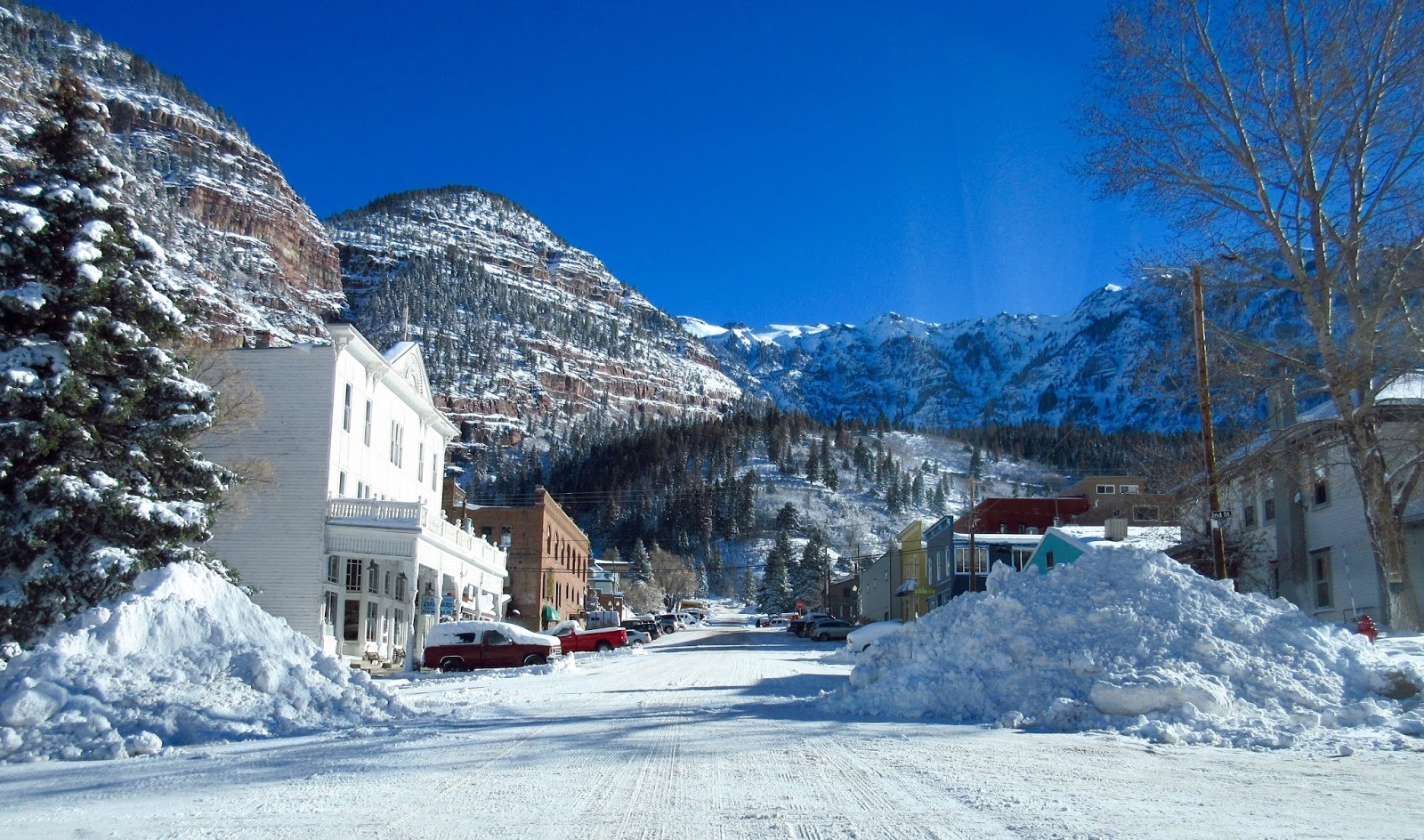 Finally, a clear day! No excuses, no matter the temps. Piles of snow from the last storm, "doozie," practically blocked side streets. City crews struggled to scoop them into dump trucks and haul off to the river. Kids use those piles for impromptu sledding hills, which has them zooming into traffic.

I layer up for the worst case scenario on Red Mountain, just in case NOAA guessed right.

I further stuffed my backpack with a windproof jacket, full-face mask, and Cliff High Protein Energy Bars... dark chocolate. In my haste I forgot the portable avalanche shovel. Not good!

The first 24 hours after a big snowstorm are the most... uh, "tricky," avalanche-wise on Red Mountain Pass. Plows stay on top of snow and avalanche removal... the worst runs purposely triggered with explosive mortar shells... a planned release as opposed to leaving it up to the gods (what a fun job, eh?). The pass closes while crews push the snow into the canyon below... like way below. Sometimes vehicles get trapped between two natural avalanches and have to wait till the crews come and plow them out. CDOT recommends winter travelers have a full tank of gas, a shovel, blankets, food, and water. 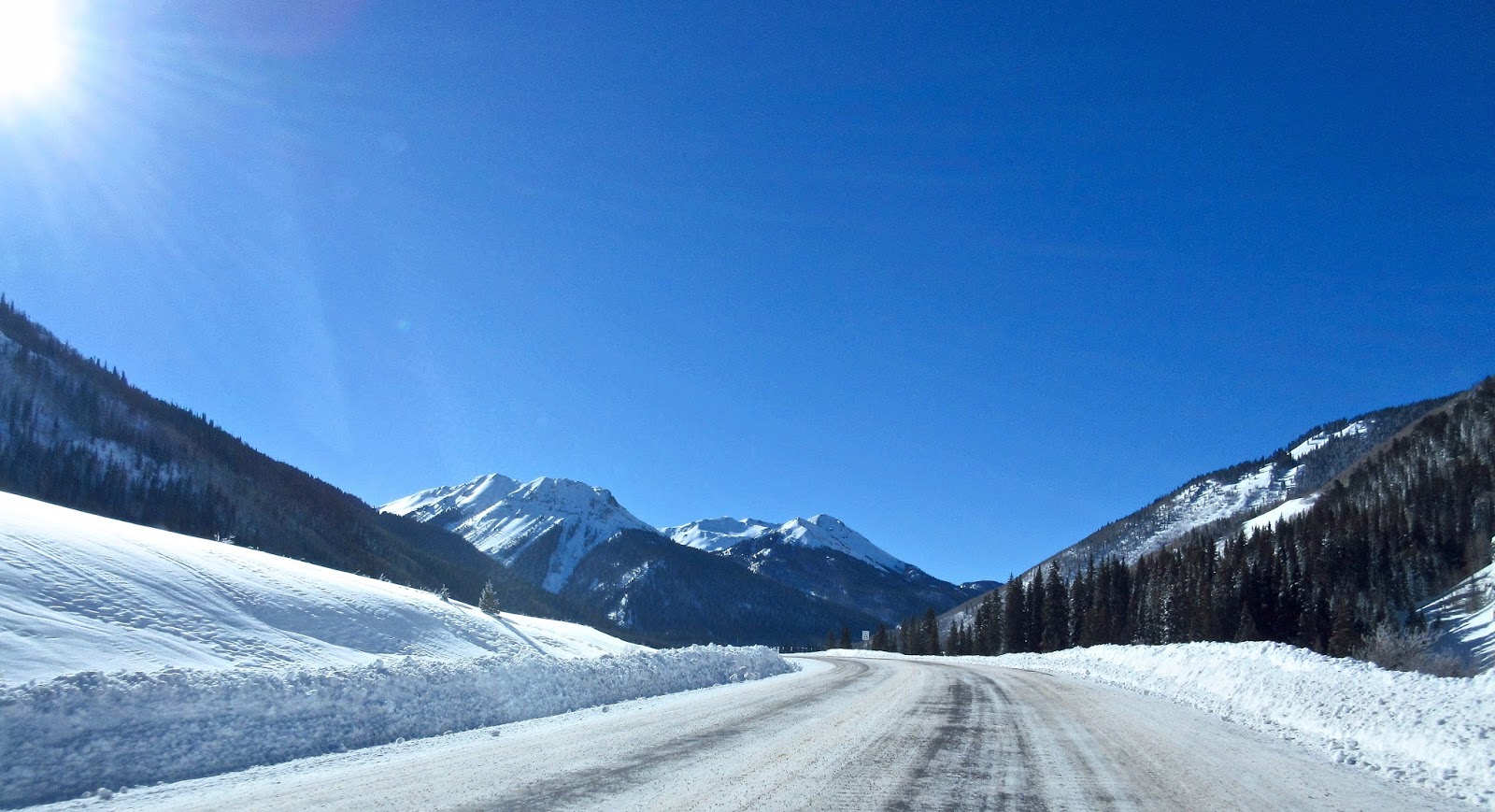 Overnight and into early morning, cold air sinks into the valleys. It's not uncommon for Ridgway, Silverton, and Ouray to be colder than on Red Mountain Pass. Such was the case for us, as it was a balmy 19 degrees with full sun on Red's Pass when we arrived. More importantly, No Wind! Between all that light bouncing around and the steep uphill ascent, we were way overdressed. Better safe than sorry... besides, the day wasn't over yet... 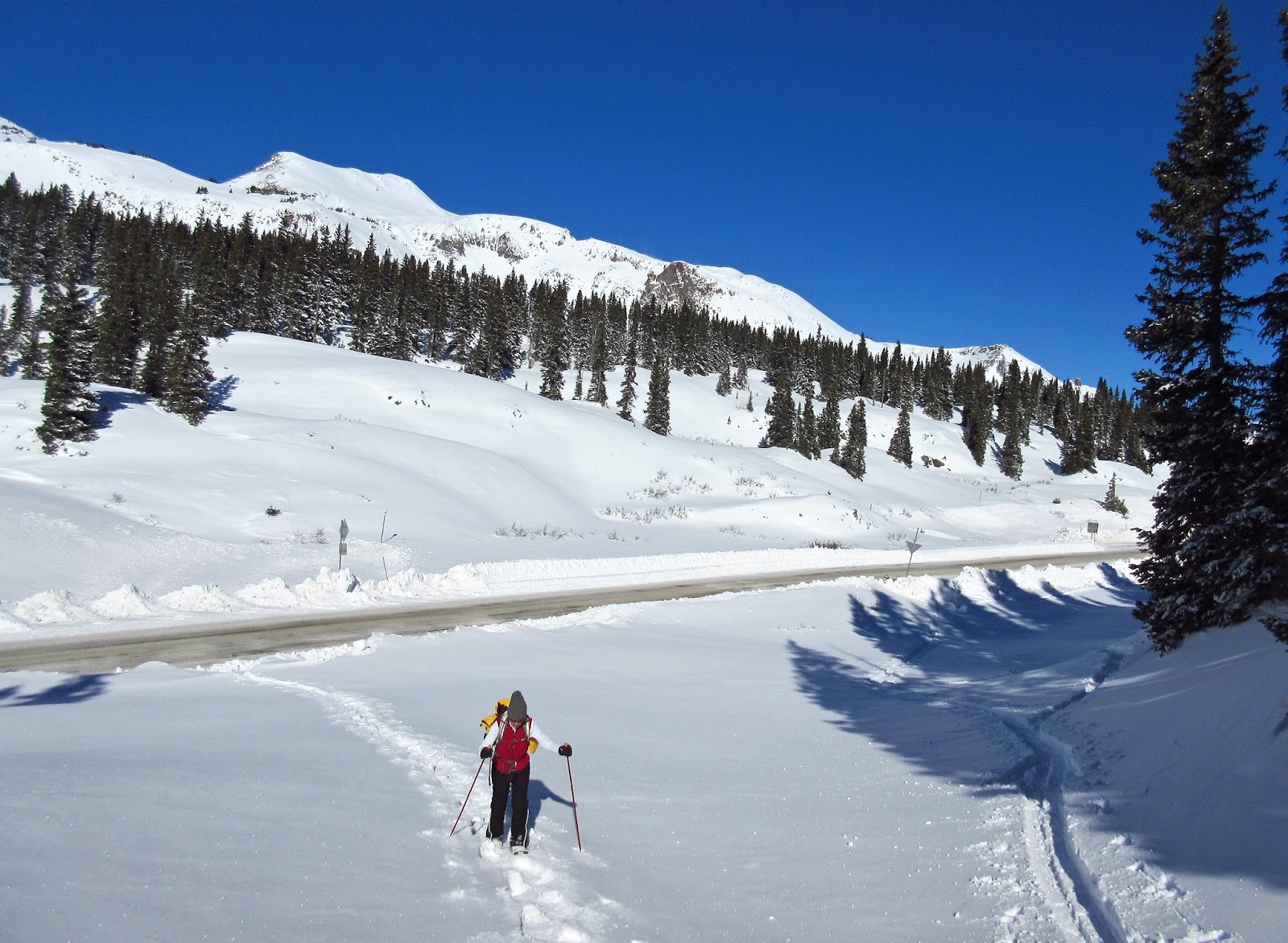 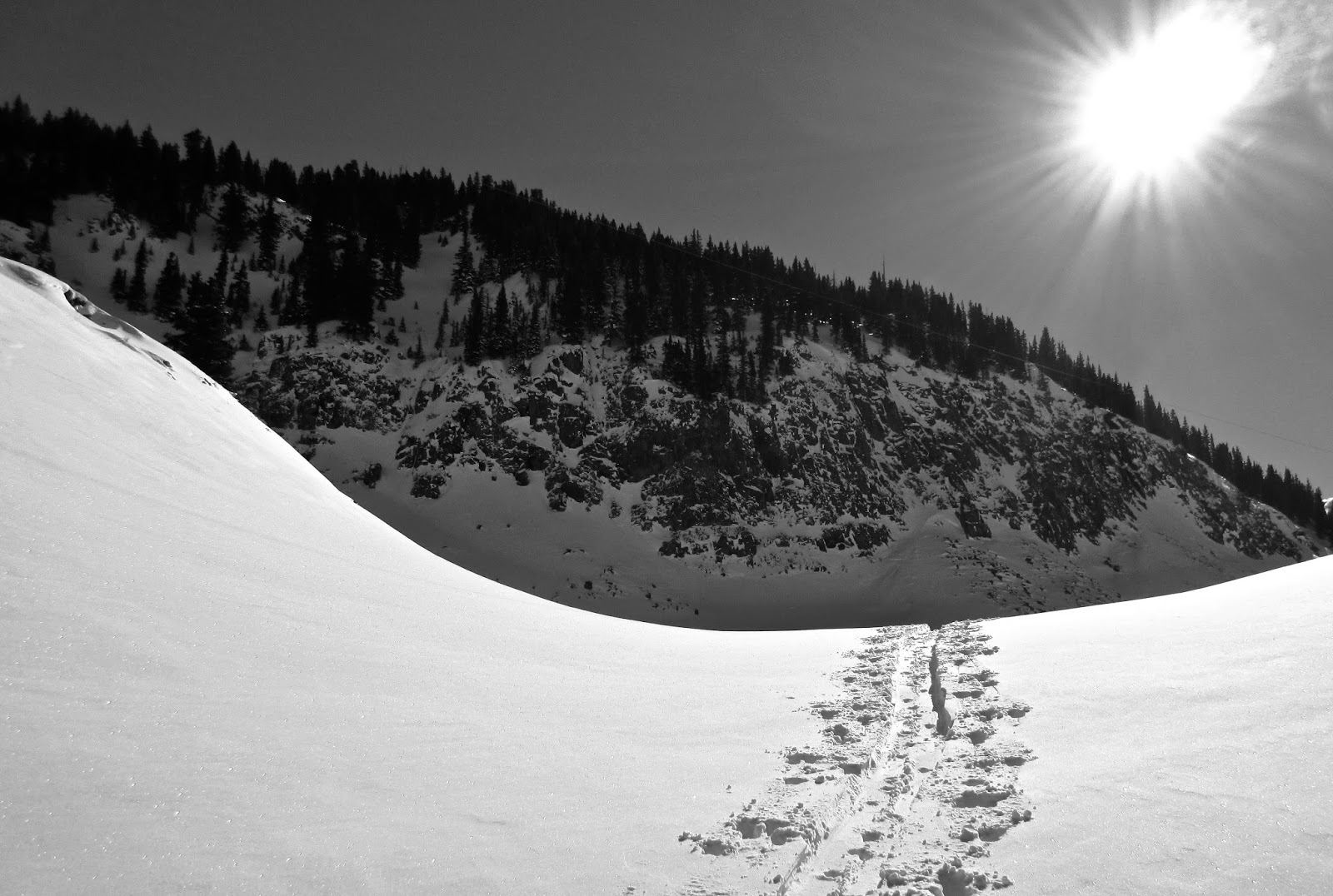 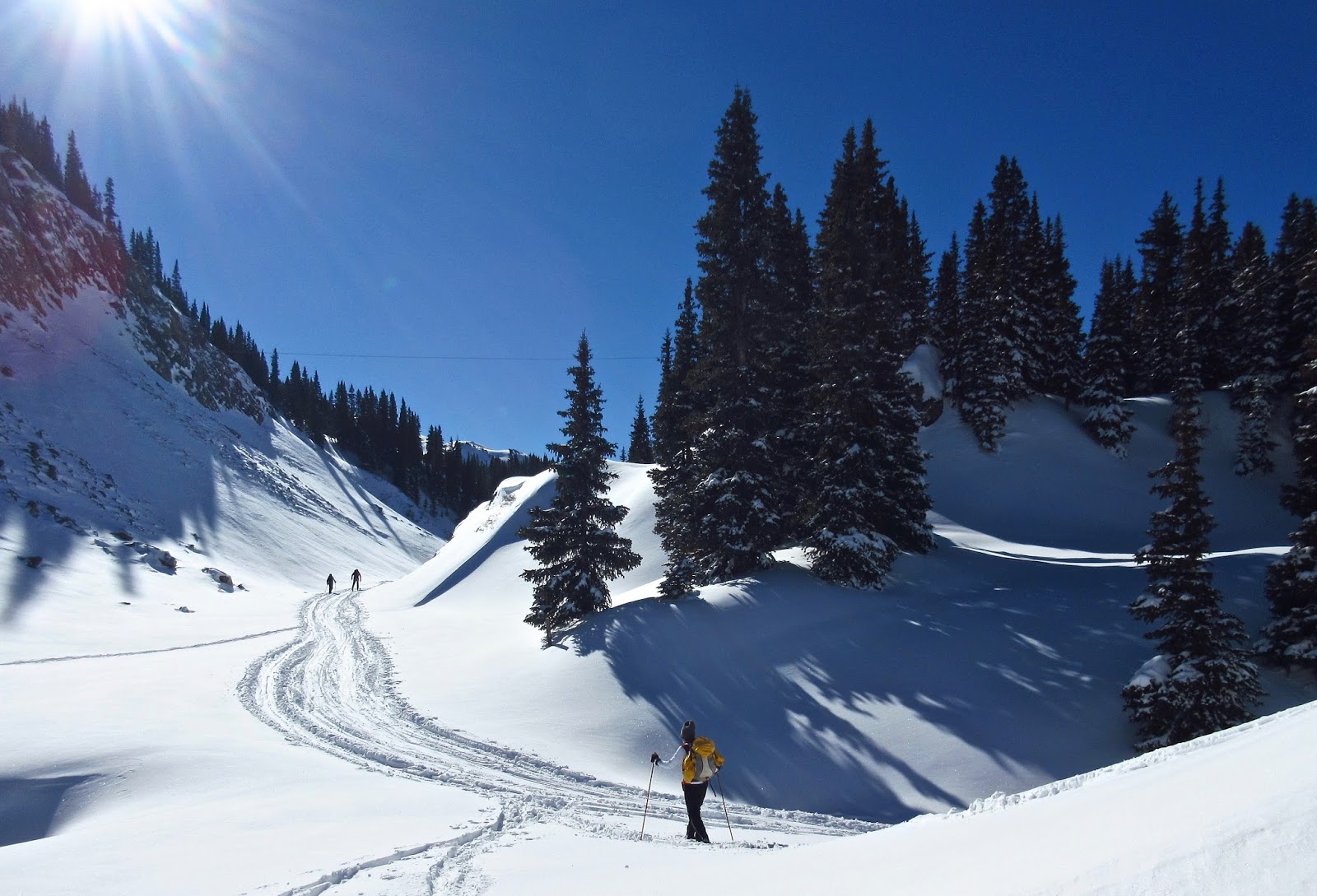 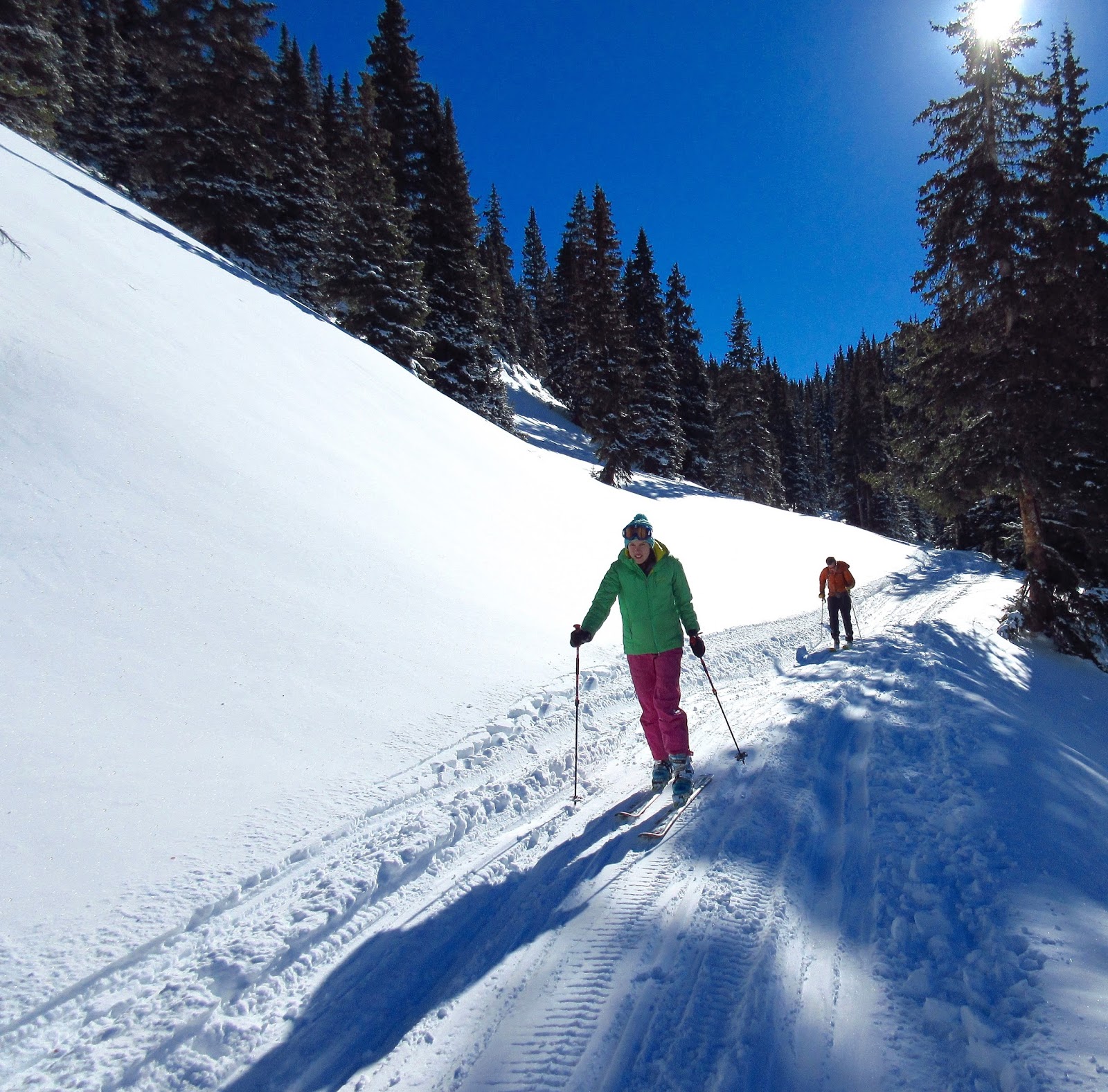 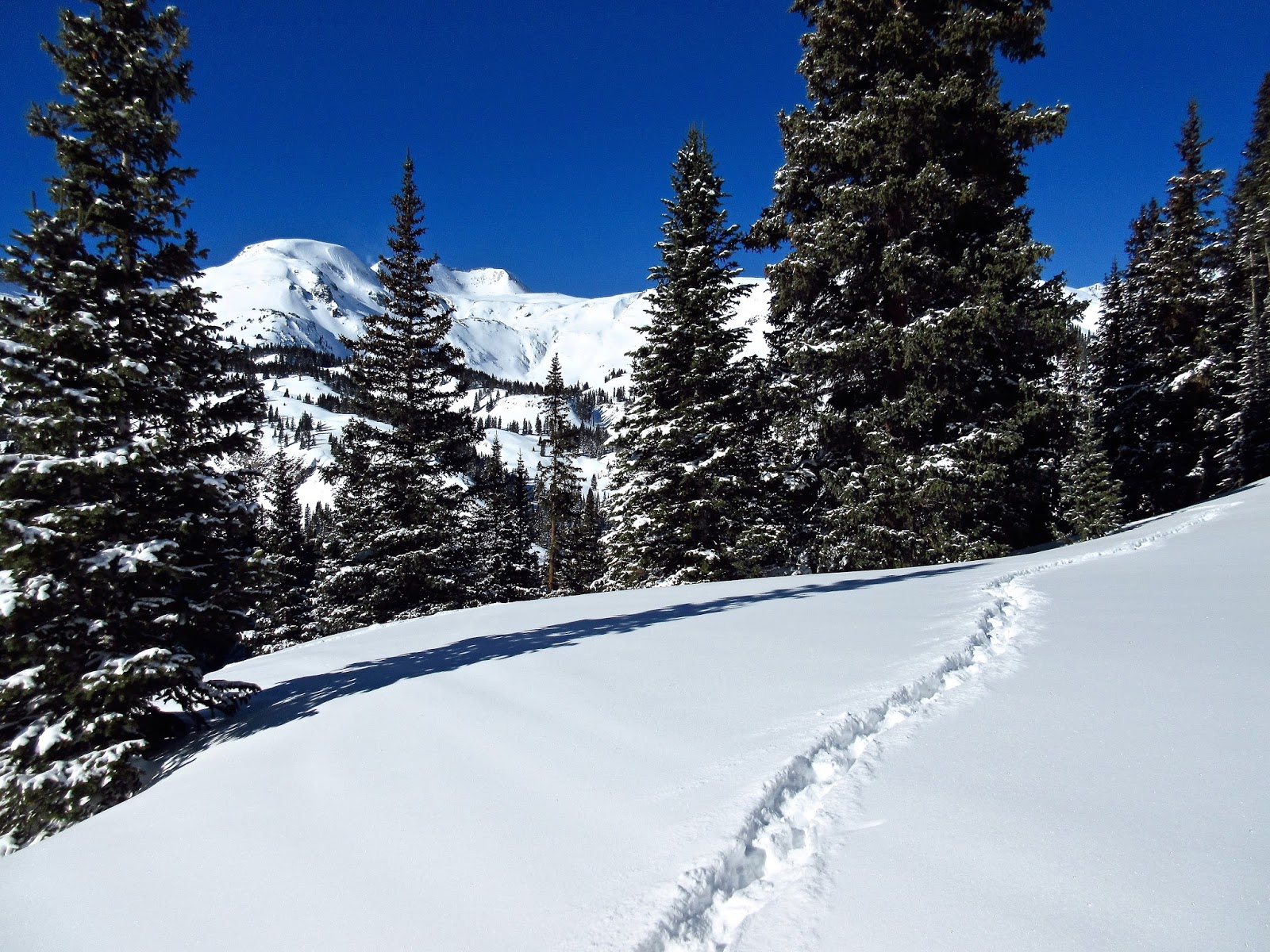 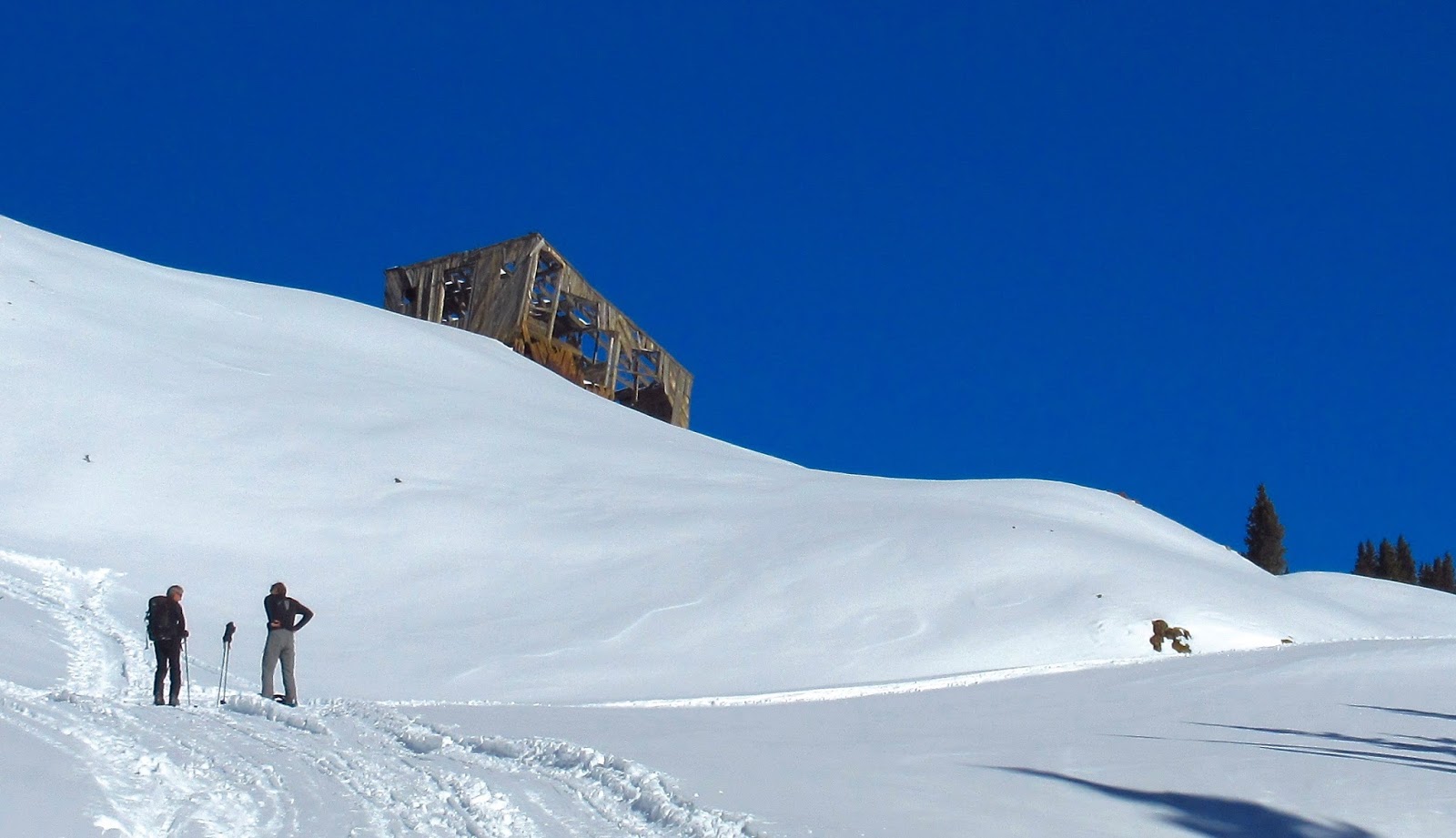 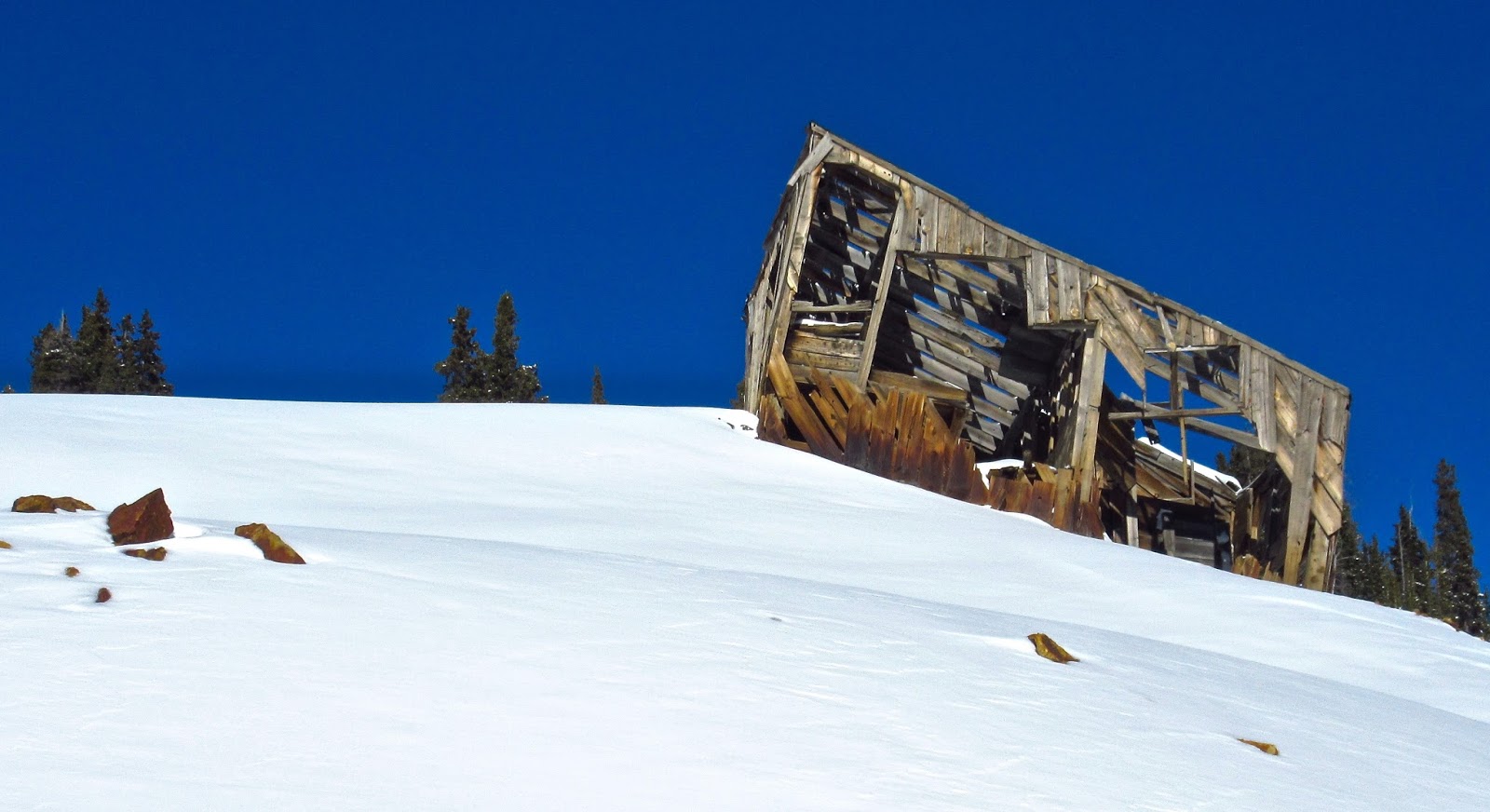 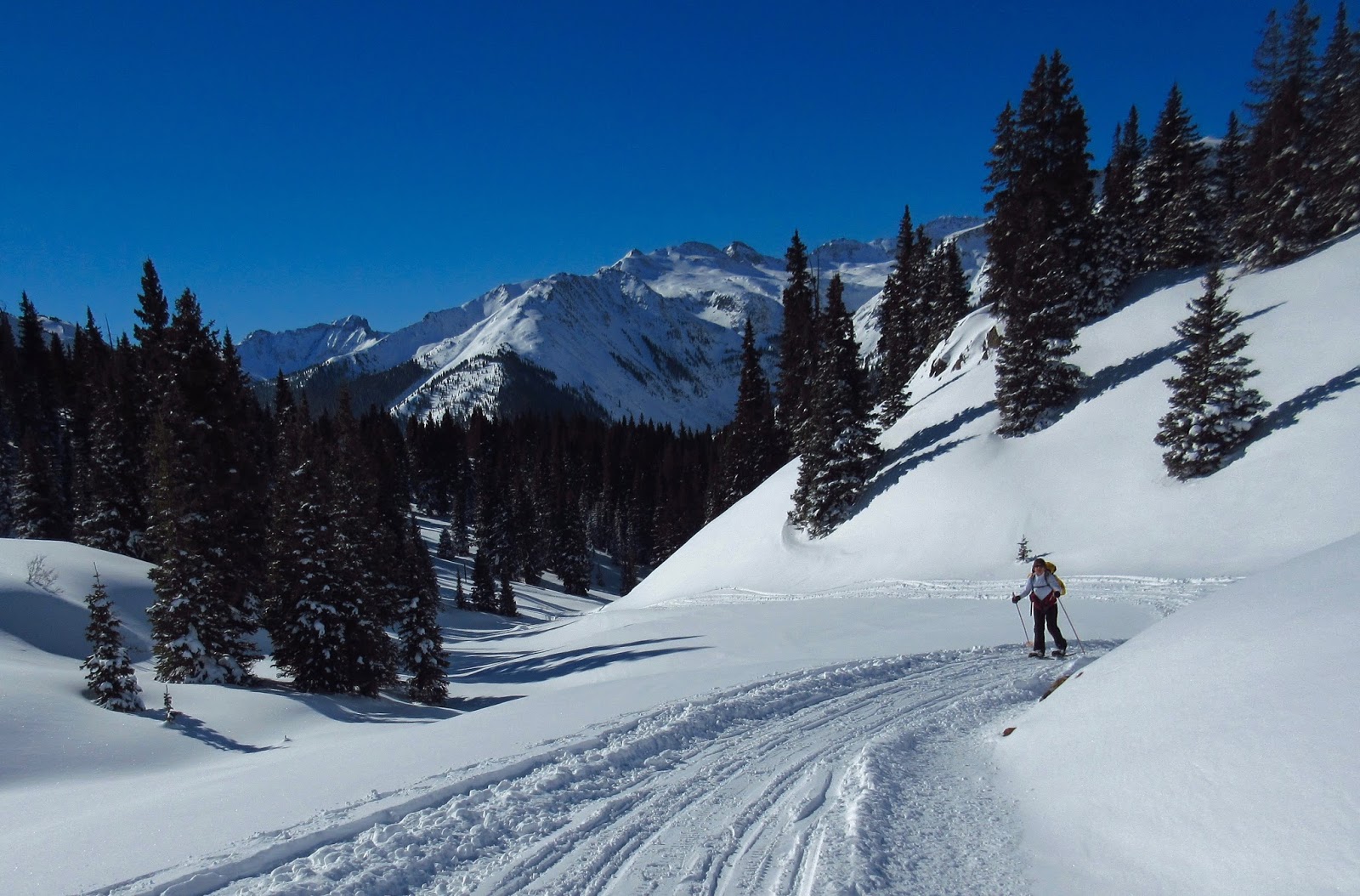 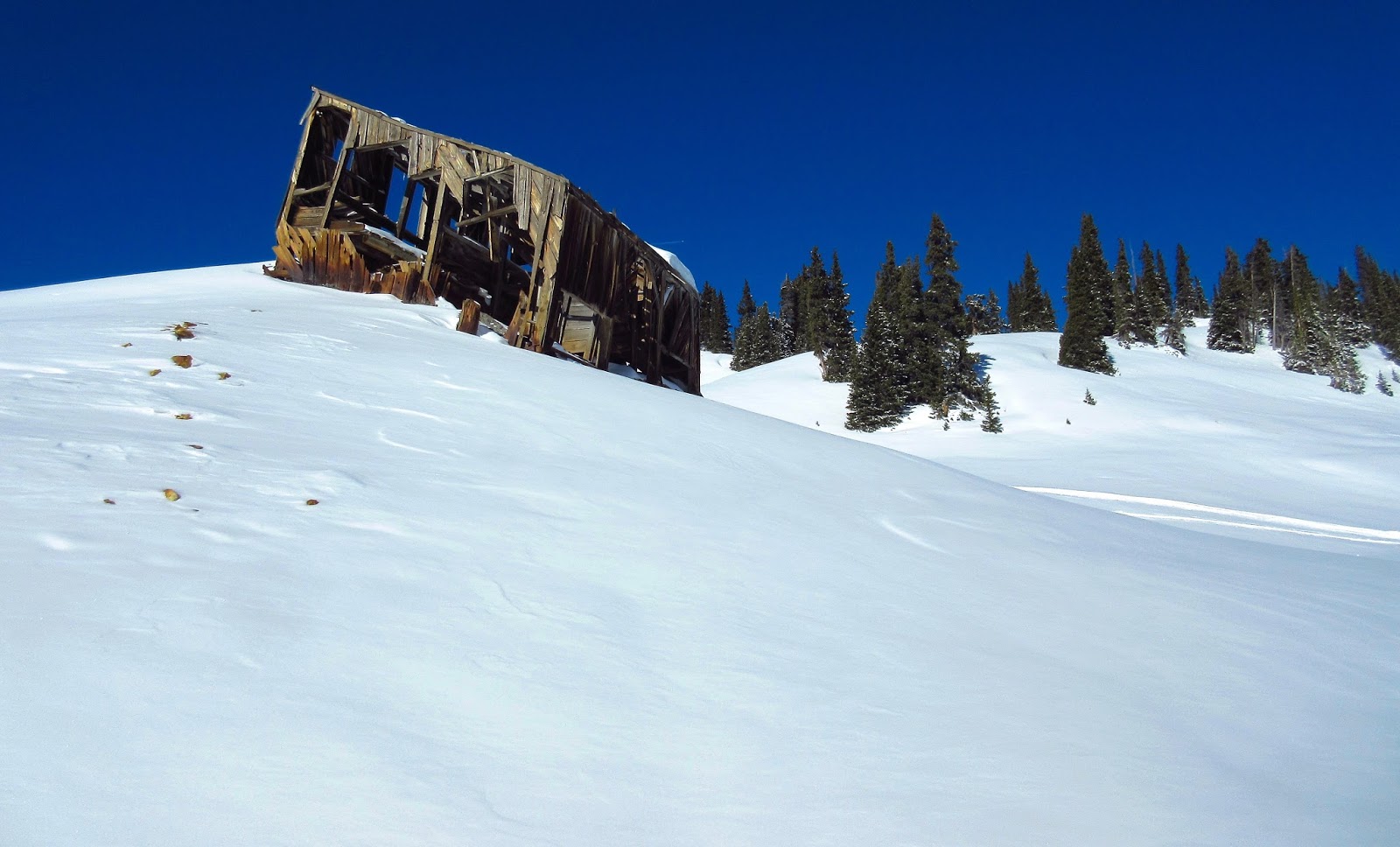 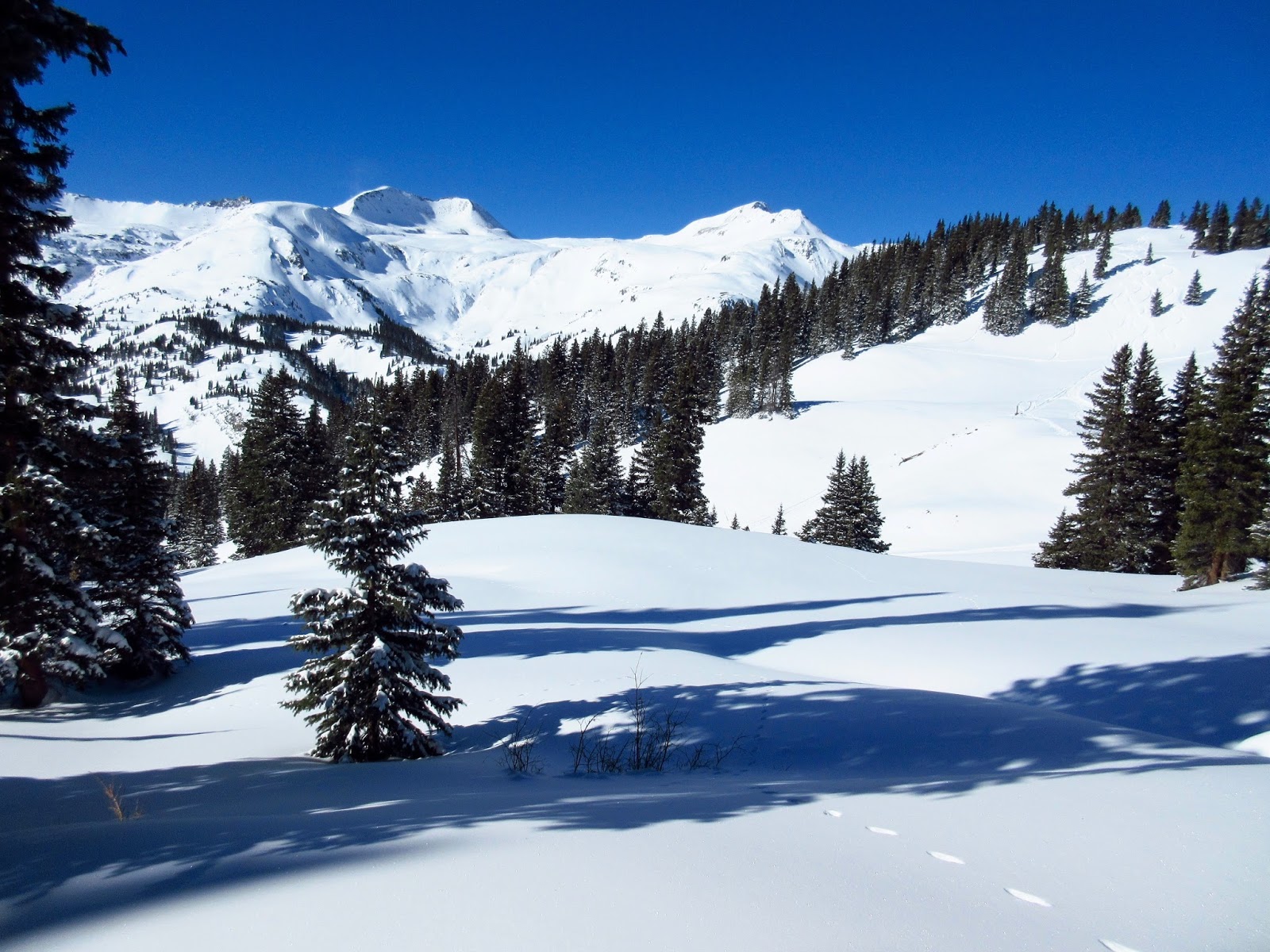 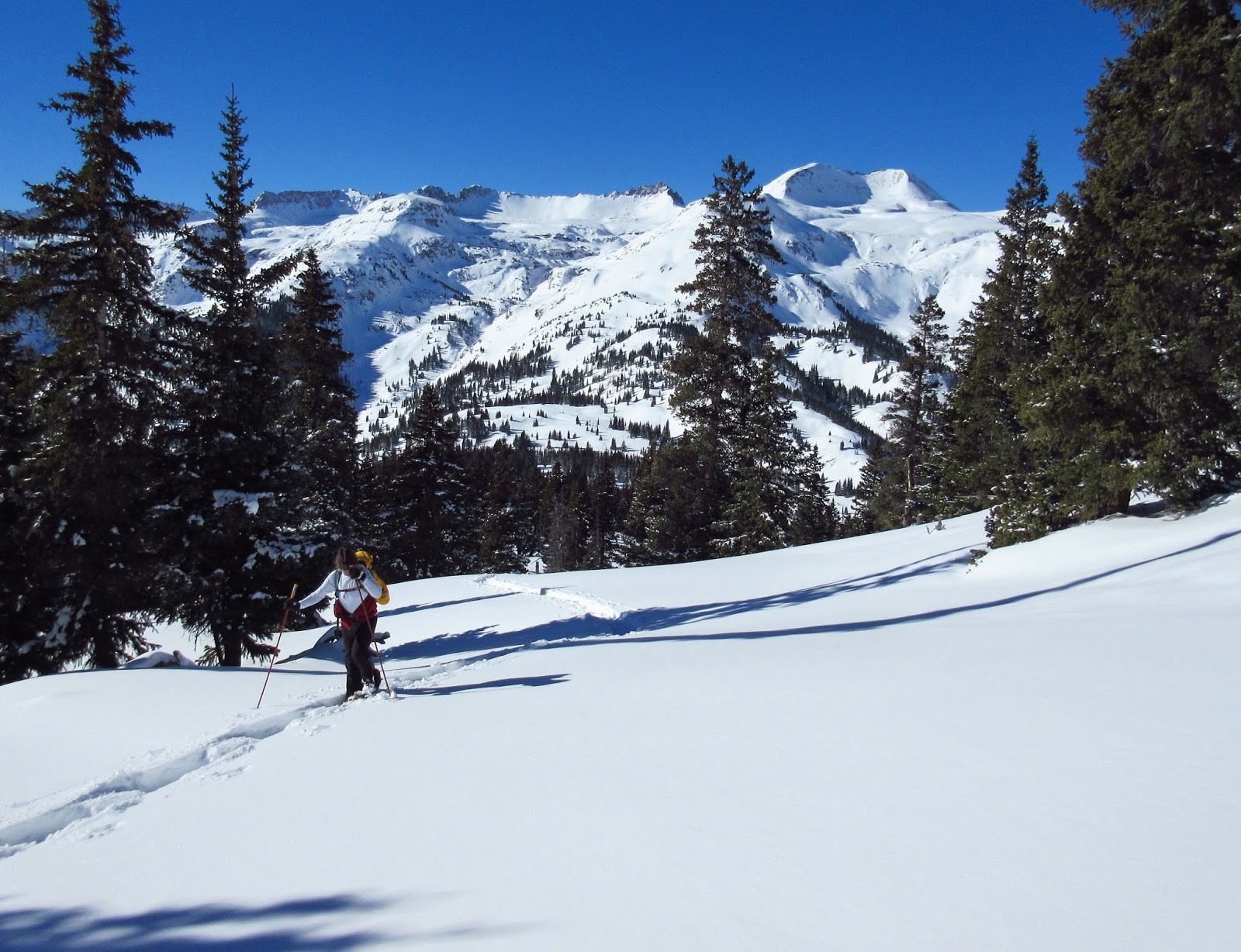 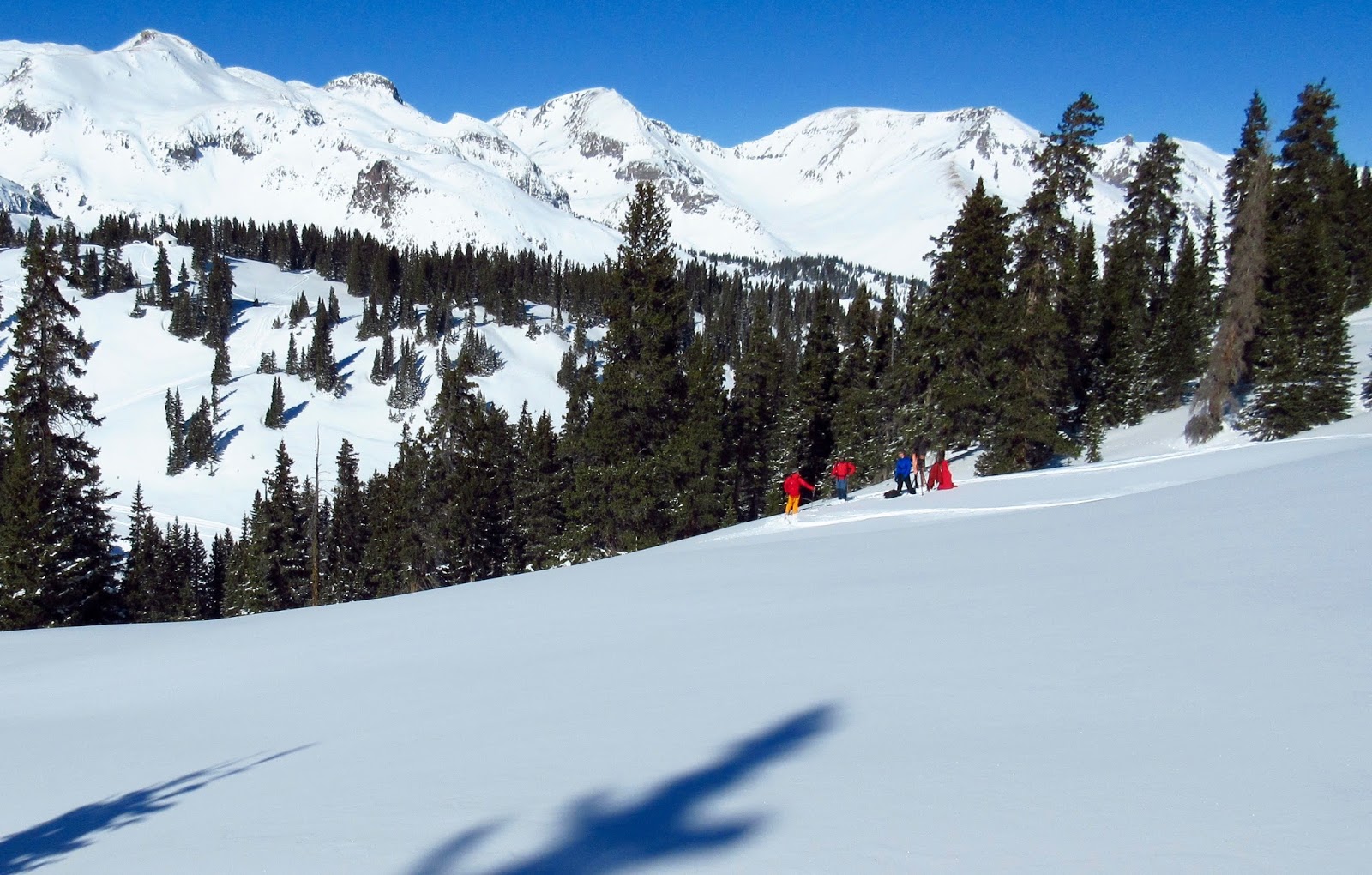 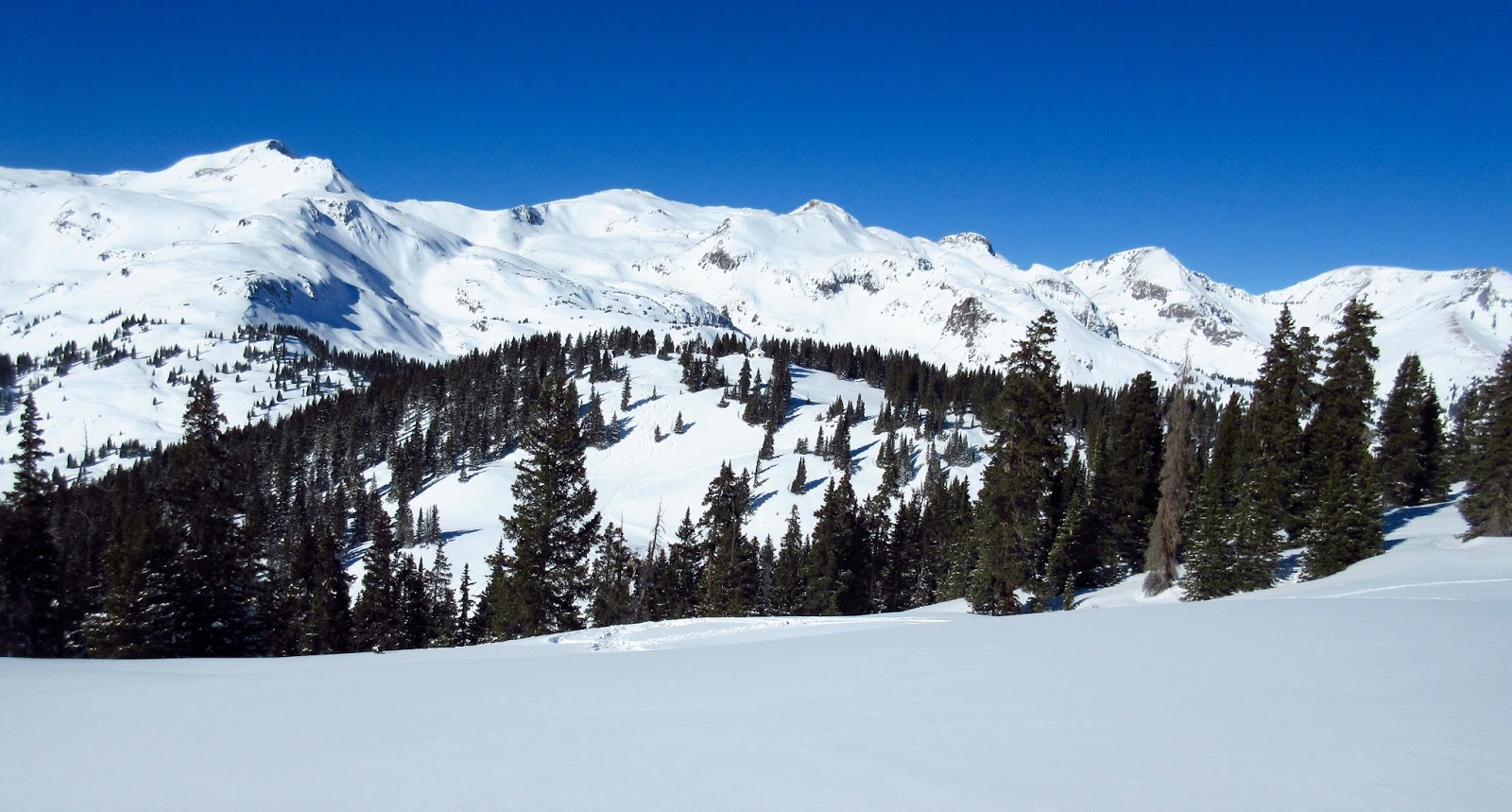 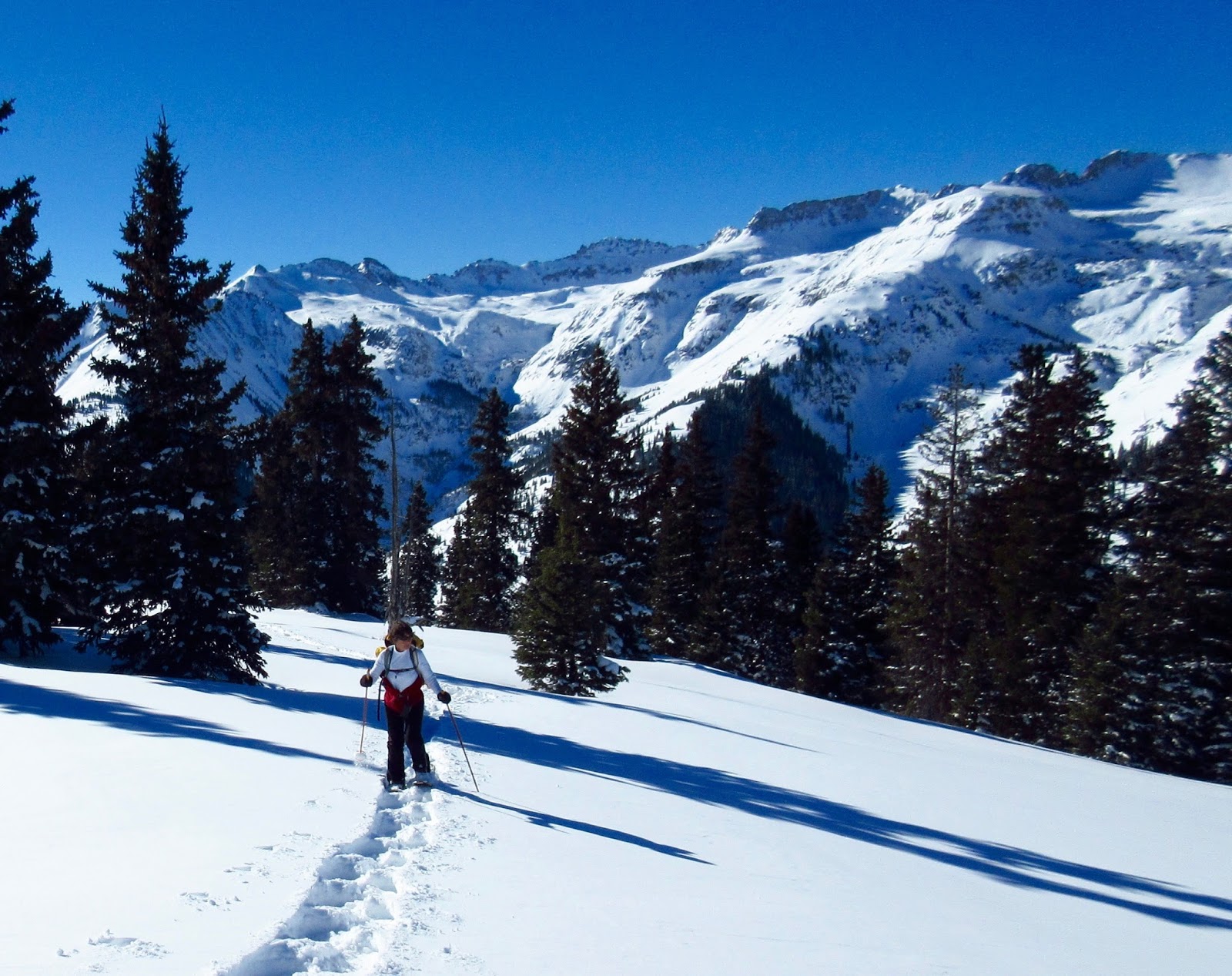 We tramped down a circle of snow and took a break for lunch... well, lunch for me, anyway, as Bobbie is seldom hungry an hour after a breakfast of oatmeal. What a glorious day, finally, after enduring two weeks of dismal clouds and yuck.

I know it's hard to believe, but we were warm to the core... too warm, actually. Sun is everything during winter. When skies are clear, all the sun's energy reflects off snow and you become a solar collector, so to speak... especially when wearing dark clothing. And this, 93 million miles removed from our energy source, our life source.

I tried to imagine the amount of energy consumed, radiating so many miles in every direction through the coldness of space. Turns out to be about
386,000,000,000,000,000,000,000,000 watts, of which our little planet captures only a sliver. But on a day like today it's  enough to take the punch out of a Colorado winter. Astrophysics boggles the mind, does it not? 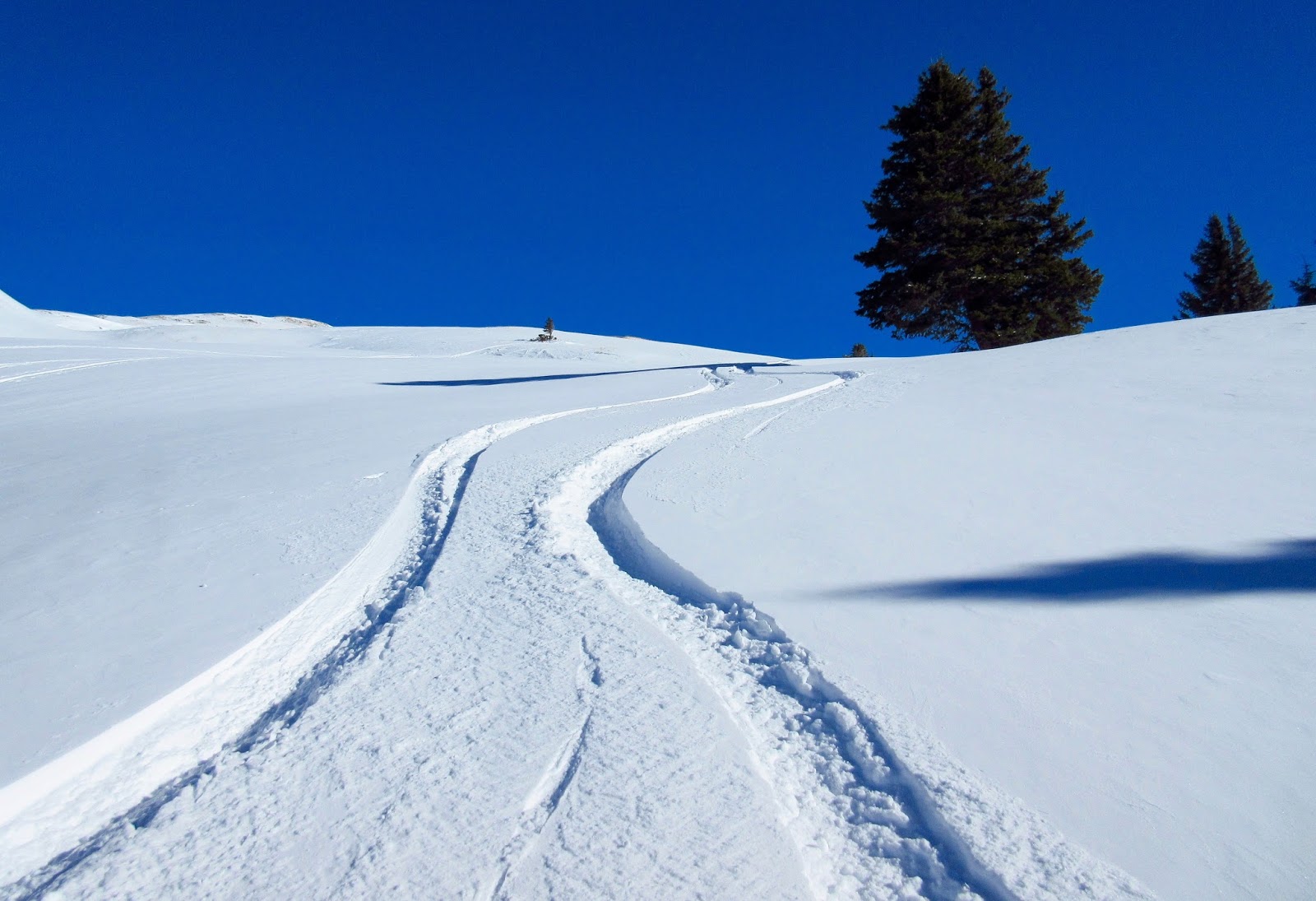 After lunch I asked Bobbie if she was up for trying to make "Ice Station Zebra" on the ridge. Once again a dumb question.

We tried to snowshoe the graceful arcing tracks of backcountry skiers in order to lessen the task of breaking fresh trail. Soon we were above timberline, trekking across shreds of wind-blasted snow, long blown away by 60 to 100 mph gusts typical for such exposed, high country.

Across valley, we could see puffs of white trailing off peaks, suggesting powerful winds. This never bodes well. The higher we trekked, the windier it got. But Zebra was so close. I crouched down for a few seconds of relief. Looking down, Bobbie was hunched over, working her way across bare frozen ground. Crazy woman. 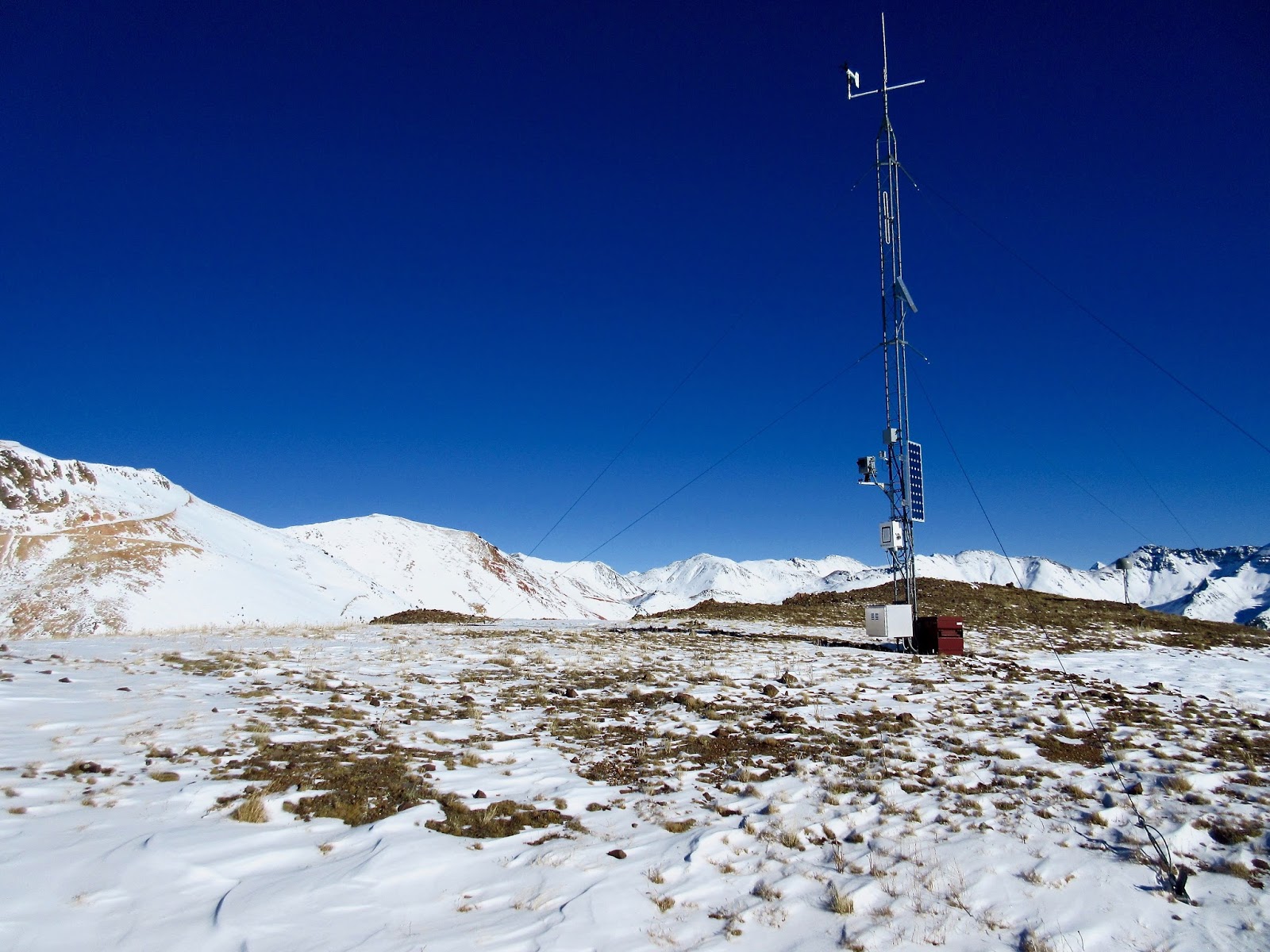 It was weird on top; after plodding through so much deep snow, I was standing on bare rocks and frozen tundra. My "layers" were wet with sweat from the effort of the climb, and it took all of two minutes before hypothermia began to settle in.

There was no place to hide from the wind, so I squatted down and began pulling clothes out of my pack... a face mask/hat of wool. Bobbie crunched up along side and did the same. We couldn't even hear each other over the wind... truly brutal. 12,000 feet is not a friendly place to hang and take photos in wind gusts to 50 mph. 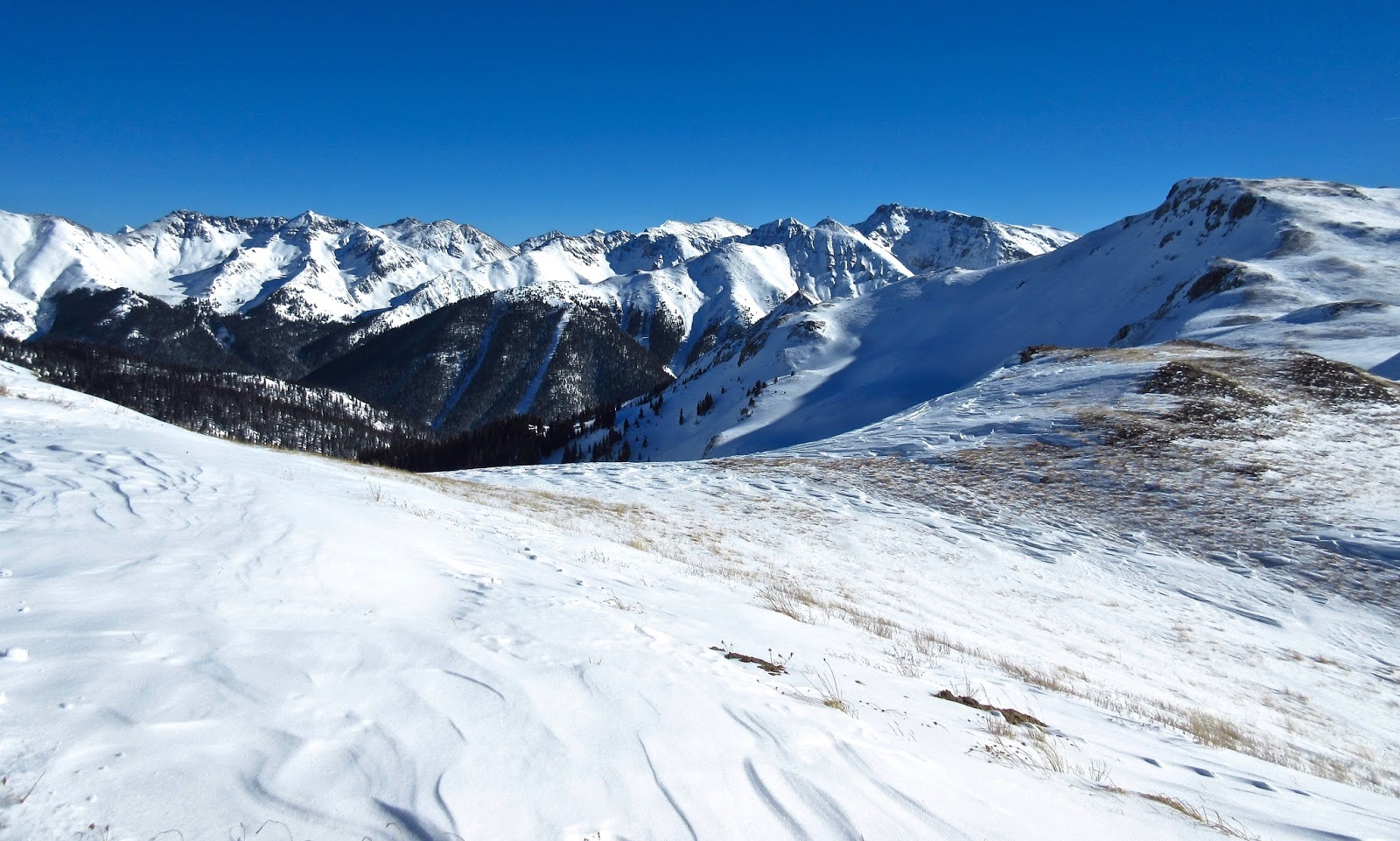 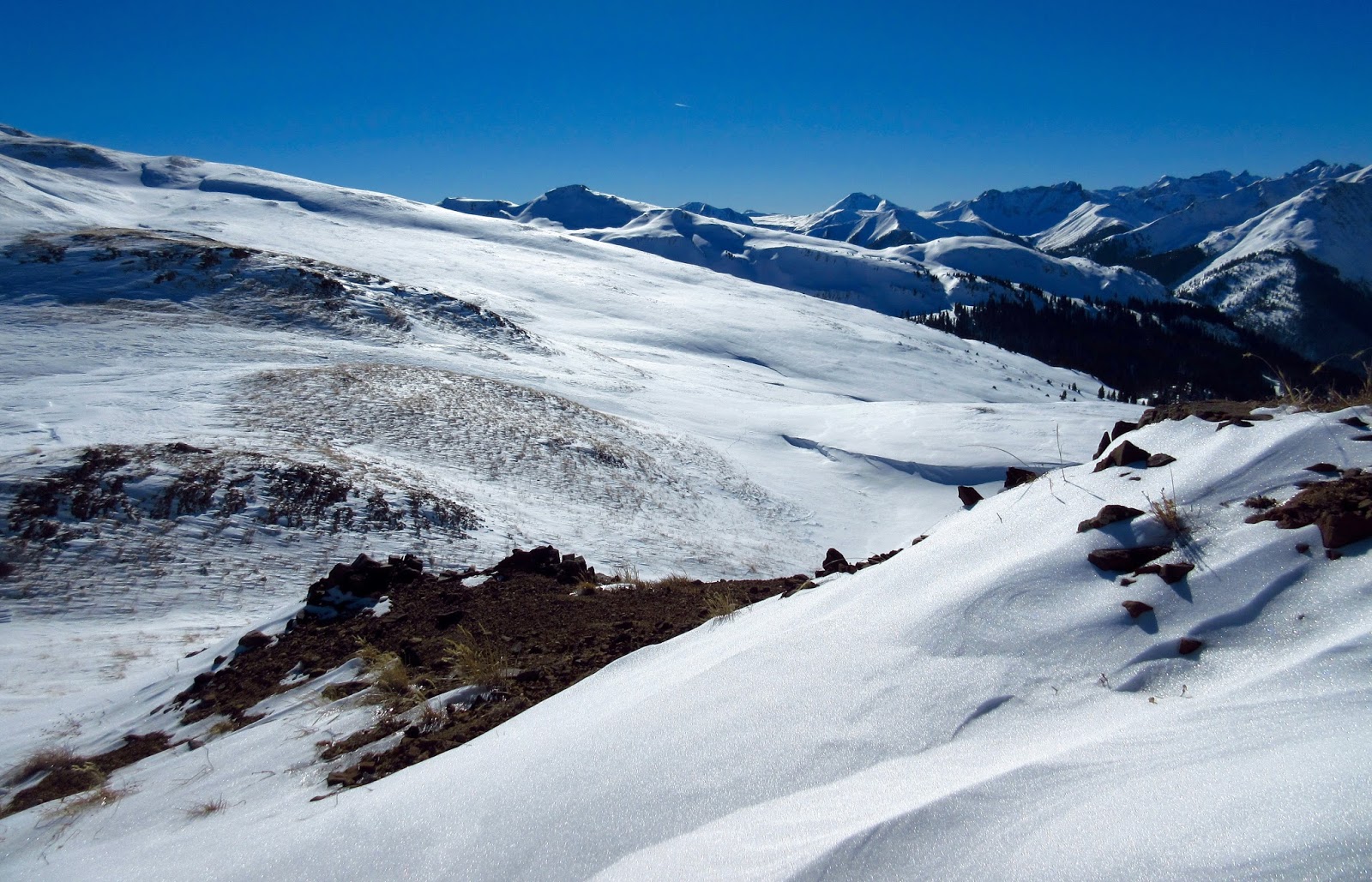 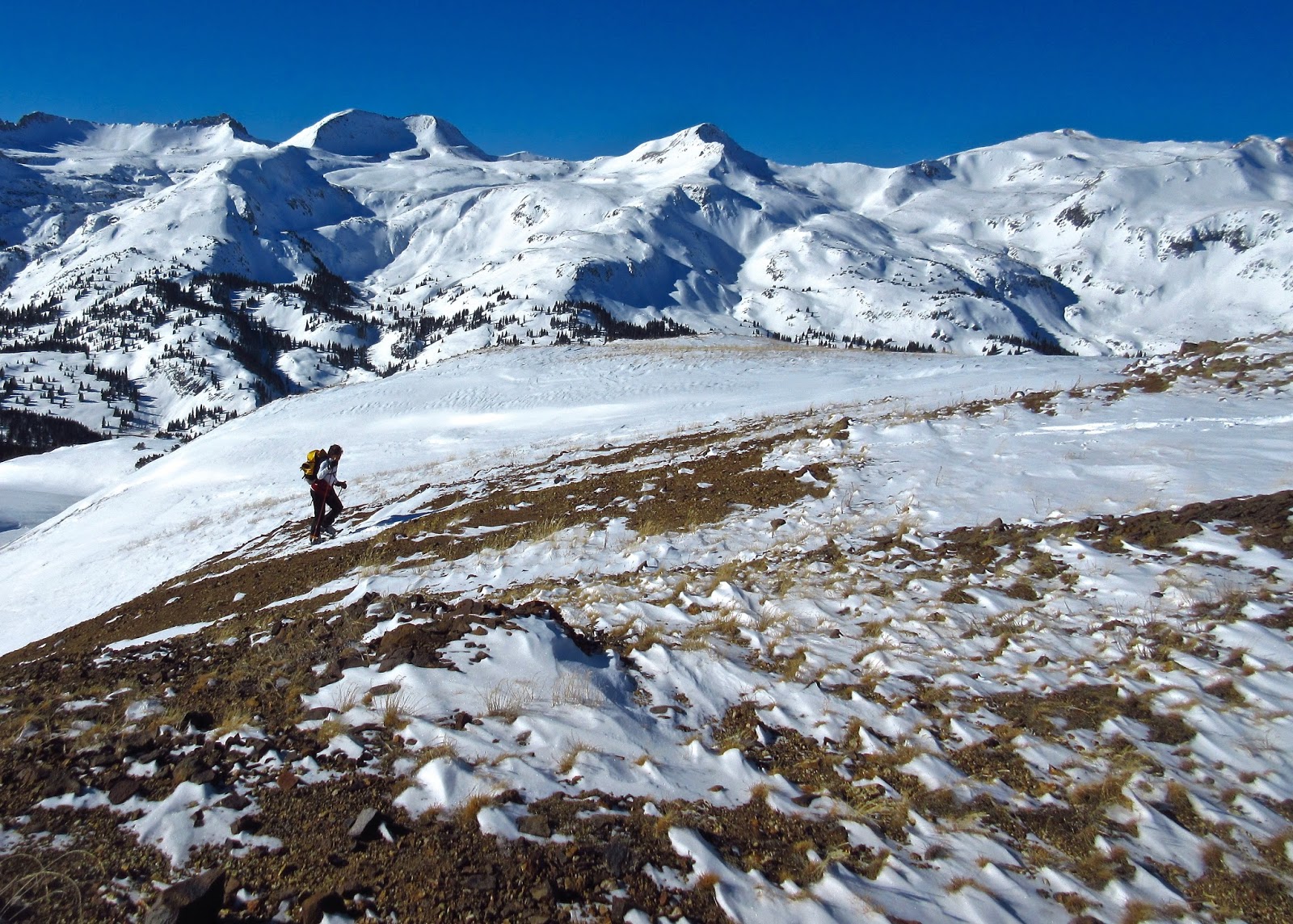 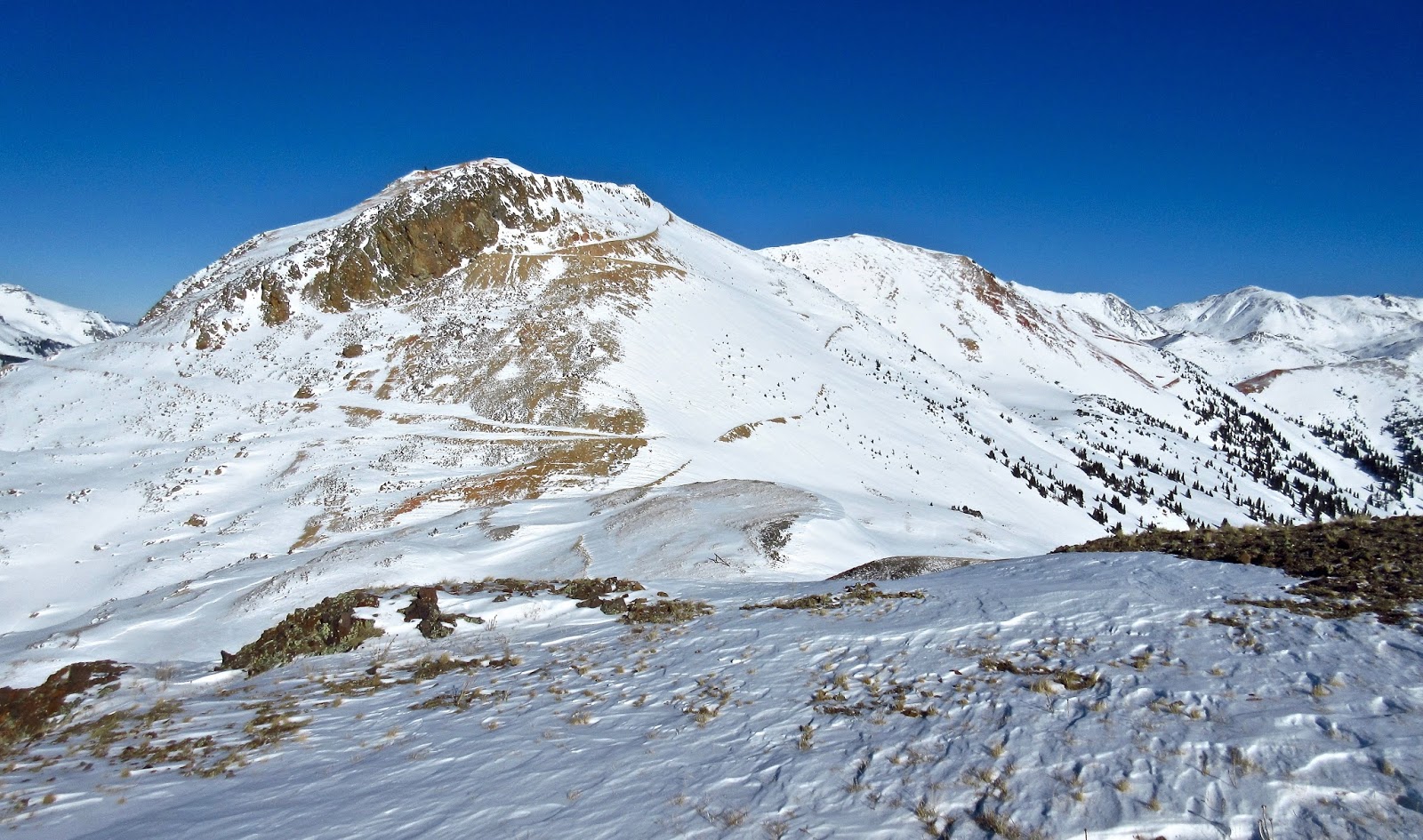 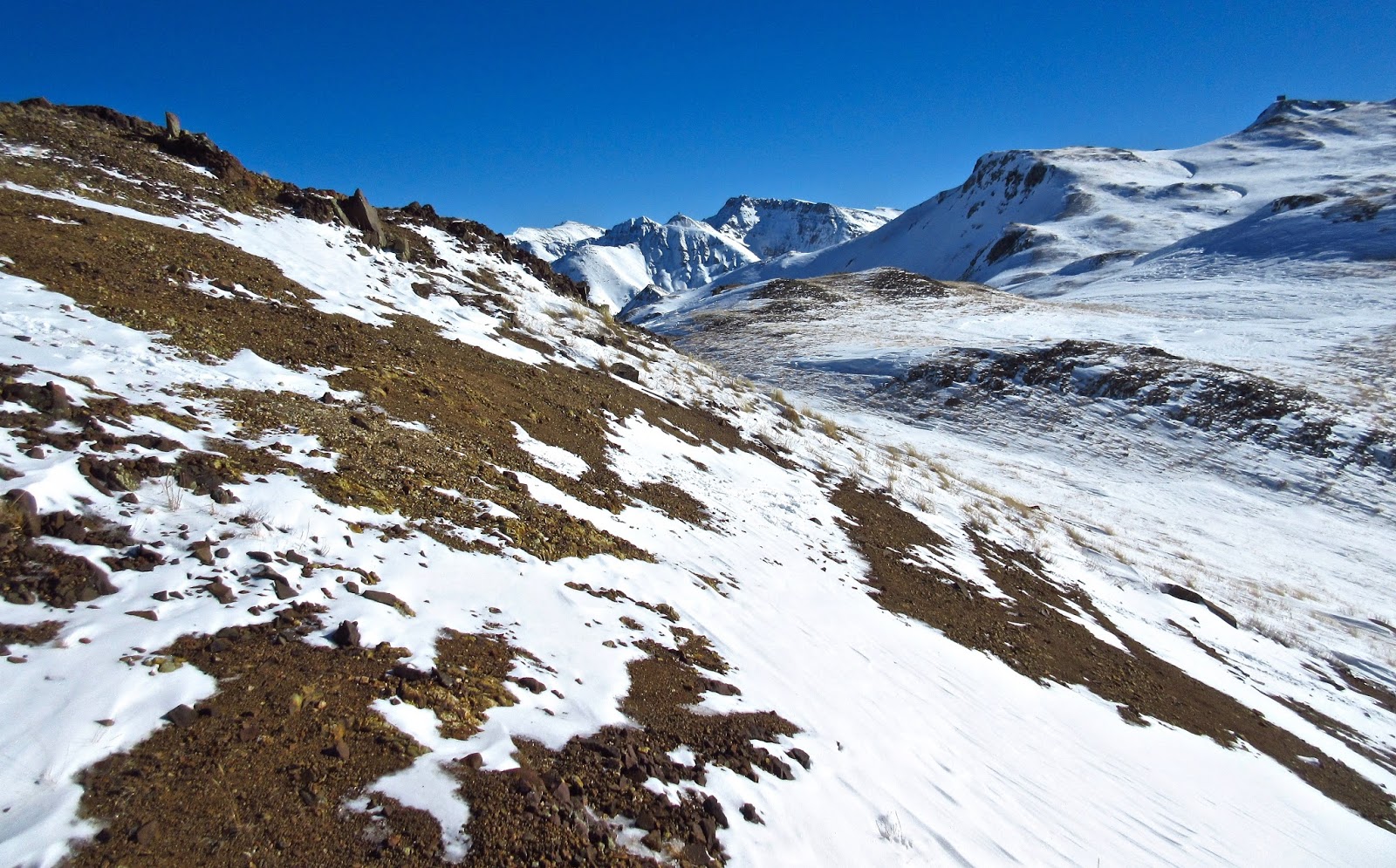 Back at timberline, the wind died. Once again we were warm, enveloped in a serene stillness that belies description. High-fives are exchanged, "We're not dead yet!" It had been a fine day of sun and thin air... no avalanches and hardly a soul around.
Life is Good.
Peace out,
mark and bobbie 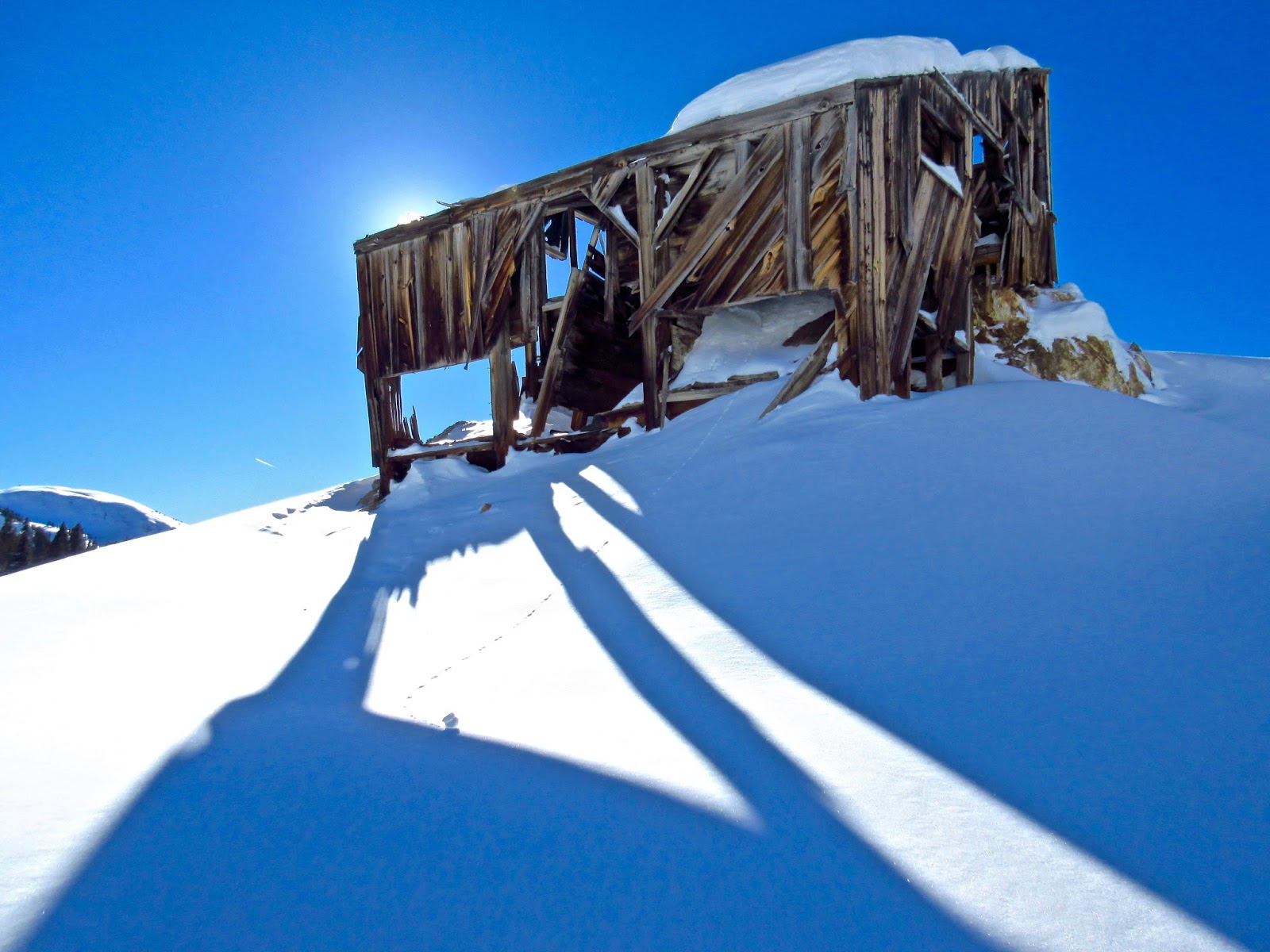 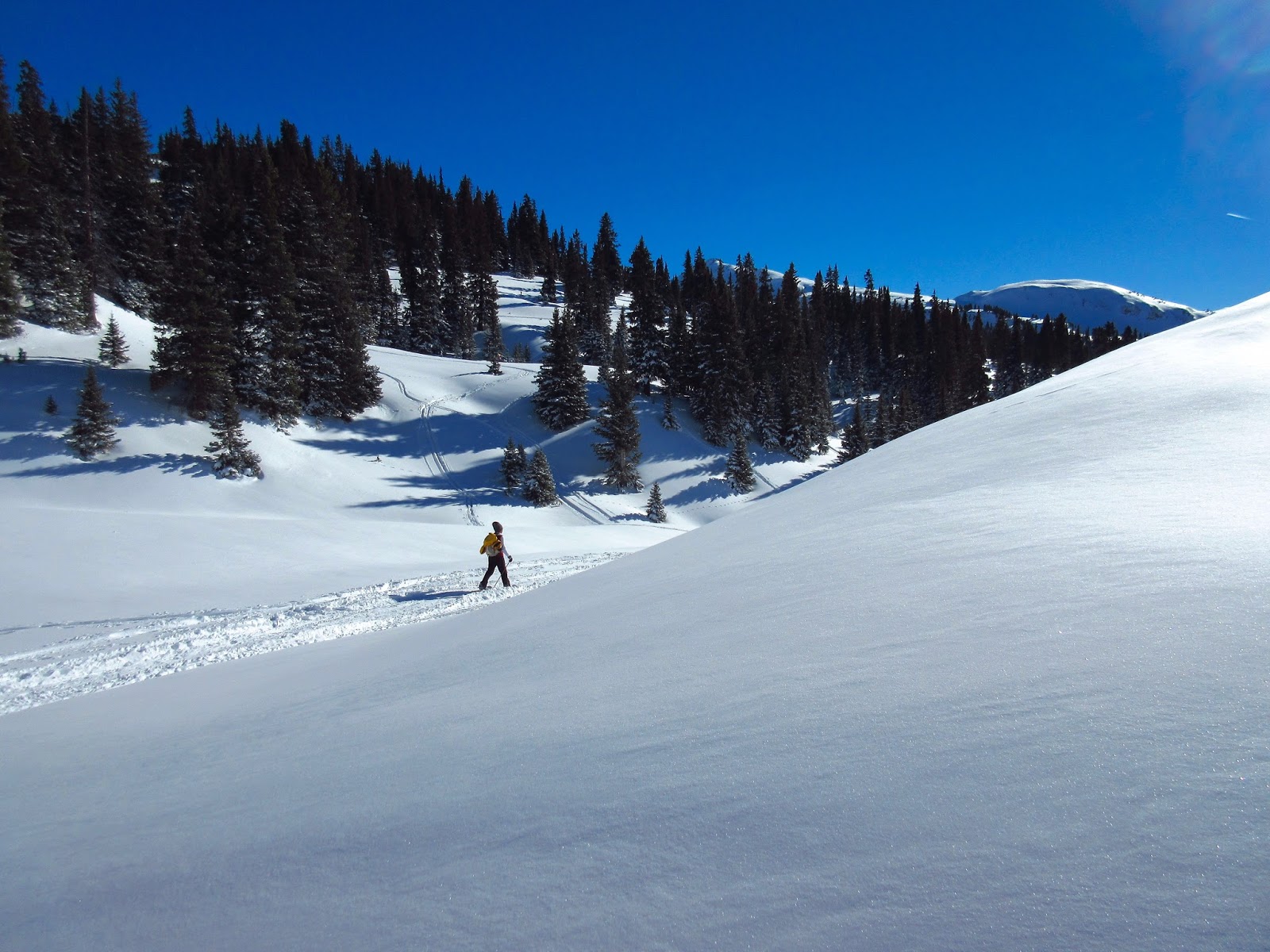 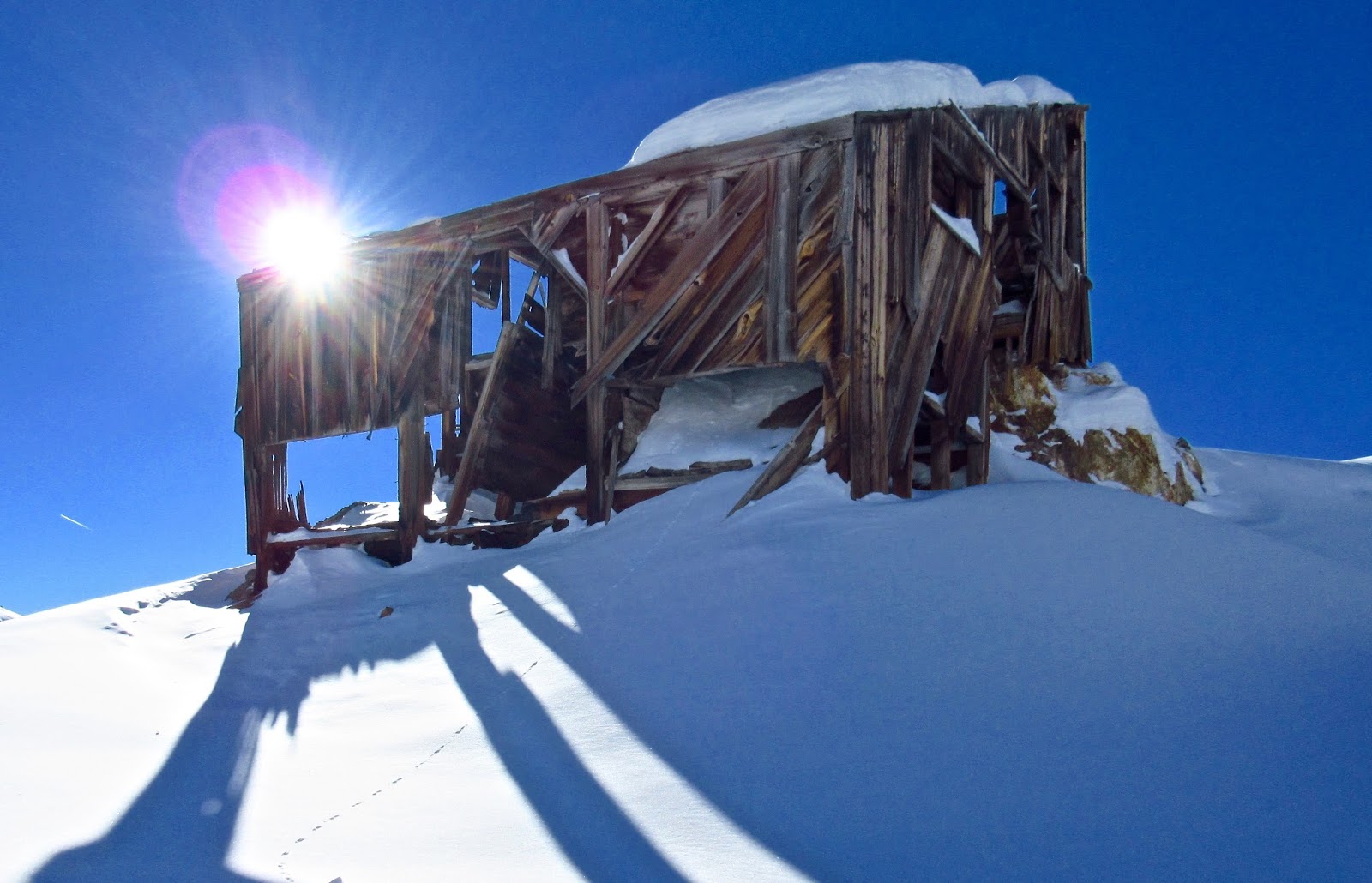 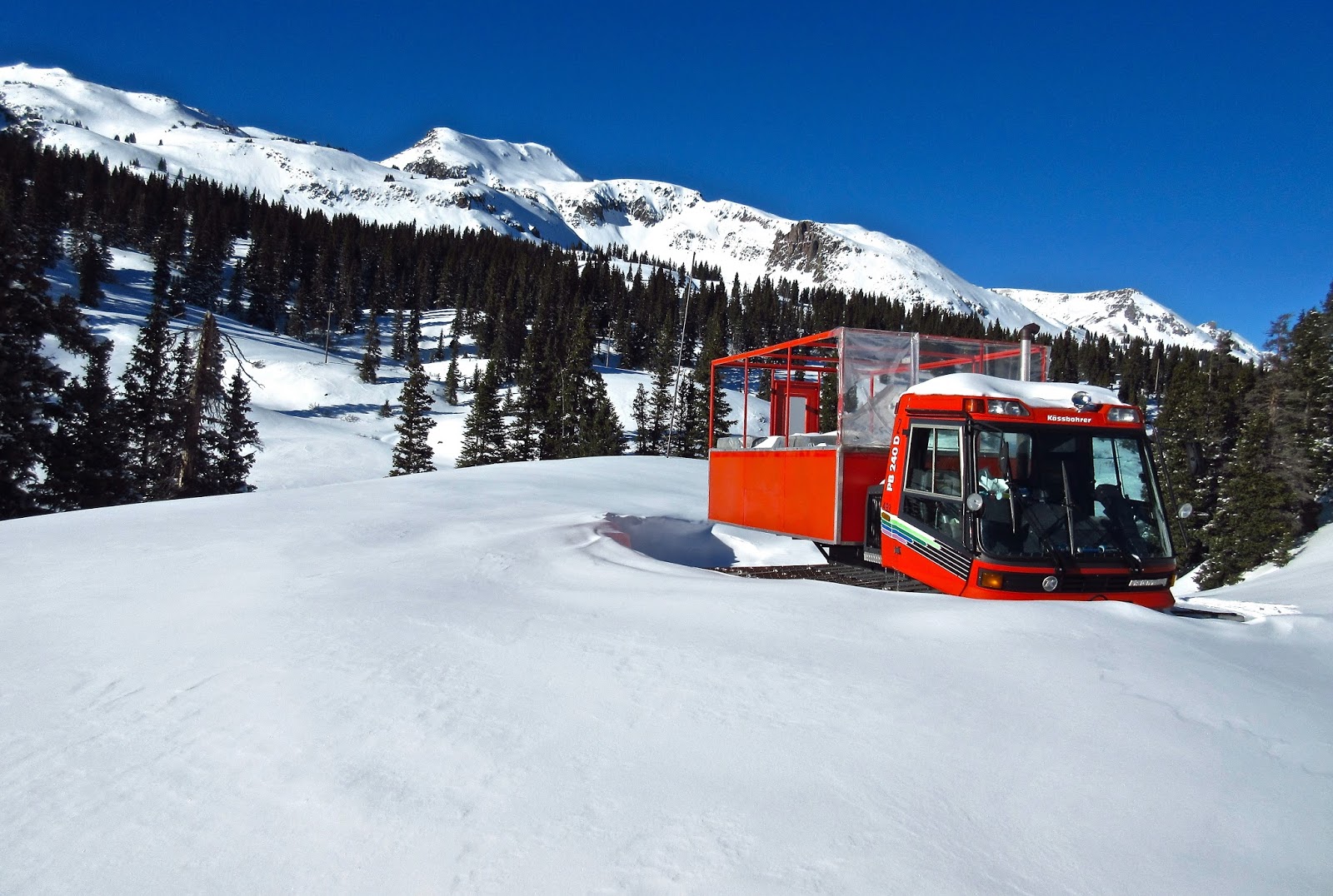