Subway Concluded... and A Few Thoughts on Solitude 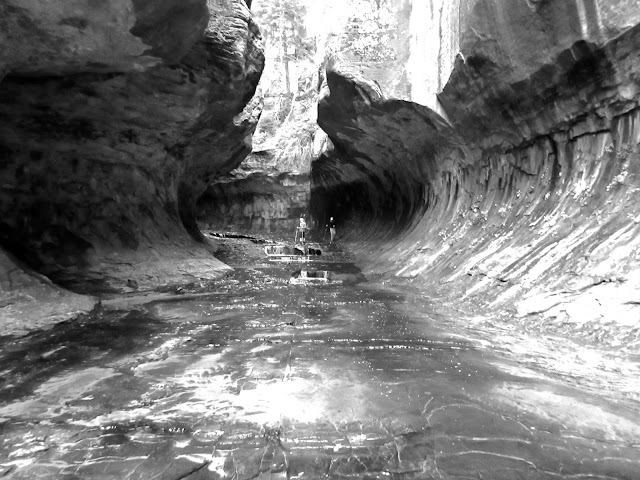 Difficult as it was, we took the easy route to The Subway. There is also a top-down hike from Kolob Terrace, where one gets to experience the entire slot canyon... all the way to the surreal "tube." The "catch" is that it requires climbing harnesses, ropes, wet suits, and training, not to mention a near dawn to dusk effort. The past couple of years I've thrown the "bait" out that maybe our gang of geezers should try it, only to be answered with scrunched faces and a polite, "No thanks." This year, however, I had a few "nibbles."

To be honest, the groundswell of gang members interested in the top-down hike could be counted on an retired butchers hand (three fingers). It's not so much a question of, "If not now, when?" as it is a statement, "If not soon, never."   Why not "go out" with more "high-fives" than regrets. 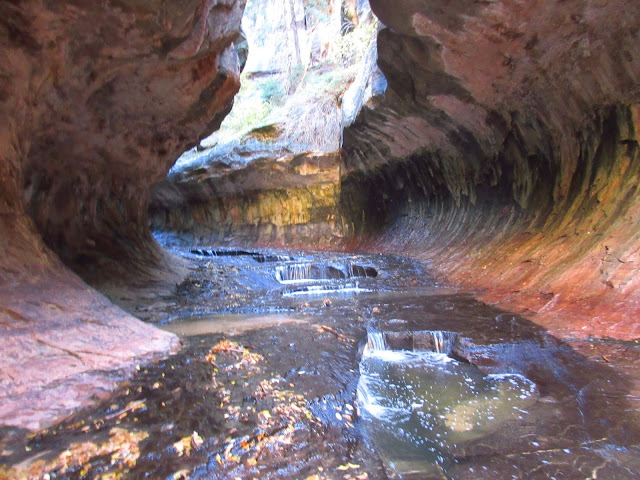 The reality of the Top-Down route is that it requires a long, cold day in a sunless canyon. As early as October, the sun is far too low for even moral support, and I've learned the hard way that one of my Achilles Heels happens to be immersing my skinny ass in ice water. All five times I've hiked Zion's Narrows has been a cryogenic experience... entering pink as a pig's butt and exiting a deathly shade of blue... promising never again.
Those who don't learn from history are bound to repeat it (sigh). 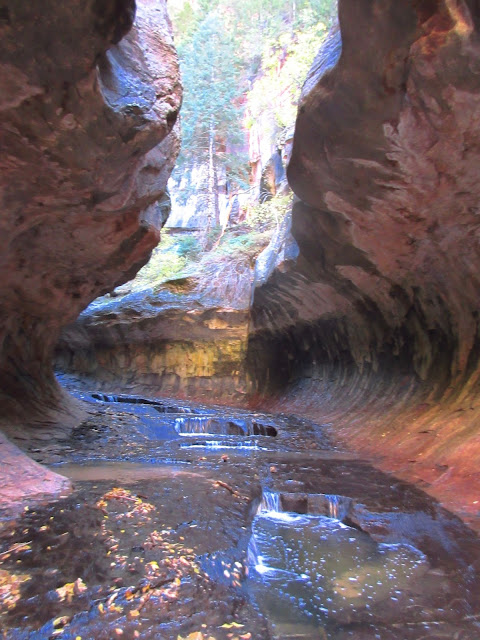 Bobbie and I have hiked to the The Subway at least five times... excluding when we got stopped by Mr Ranger Sir for not having a permit. What a crushing blow that was. After three hours of blood and sweat—bouldering, wading, falling—we were turned around a few hundred yards from the "tube." I'm still not over it. 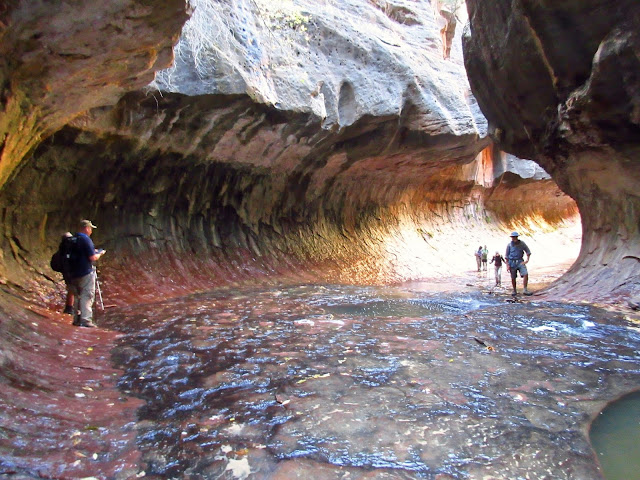 In the "good old days" we practically had The Subway to ourselves. But, things change. You've probably noticed the trend, how National Parks, State Parks, Forest Service camps, and even once remote BLM Boondocks are now overrun with humans and their toys. We truly are "loving our outdoors to death," as our parks and playgrounds attract record numbers of visitors. Bobbie and I had to adjust by going further... staying clear of pavement and the over-trod main corridors. 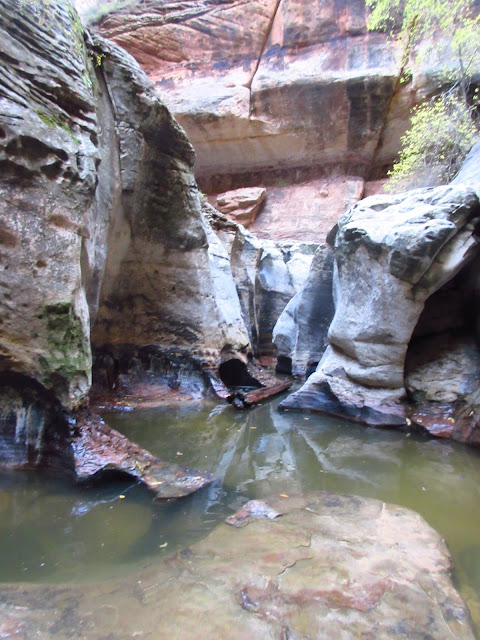 It's been challenging. Here are a few things to keep in mind if you seek a solitary experience your favorite National Park or Playground, starting with the obvious:
This works especially well in the Zion area, and why we continue to come back year in and year out... sometimes not even making it into the main corridor more than once or twice in the six weeks we hang around. There is a rich abundance of less-trampled places, some just as cool as beyond the gates. Unfortunately, Subway is not one of them. Even though the Park only allows 80 people per day, the "tube" was crowded and loud this year. I know, our Geezer Gang is part of the problem. I have ambivalent notions about this reality.

As mentioned in the last post, there is a certain joy to be derived from sharing. Though I sometimes whine, this blog is a good example of that. I also derive joy from sharing a good trail in the company of friends. There are many occasions when I prefer/need to hike/bike alone. Oft times Bobbie and I purposely put distance between us during our outings, so much sometimes you wouldn't think we were on the same hike. This allows us to be alone with our thoughts, go at our own pace, to take delight in solitude. There are times when my mind needs to be free... to flit about like random chickadees, branch to branch, idea to idea. Then there are times when I enjoy the "flock," like geese, on a southward mission. Humans are perhaps the oddest, most complex, and intelligent species, yet we push to the very fringe of destroying our own "habitat." When we reach the tipping point, when we can no longer find solitude in our National Parks and public lands, we will have squandered the most precious gift of all. 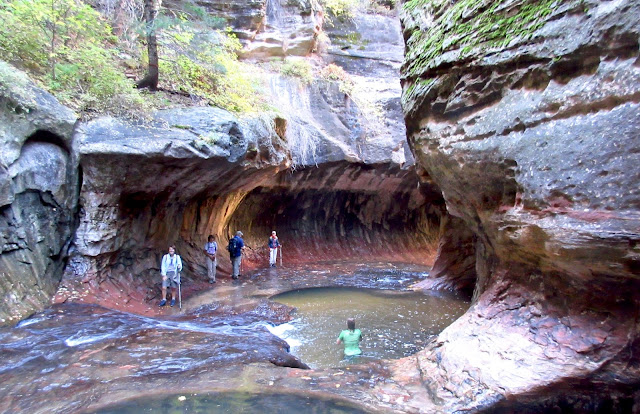 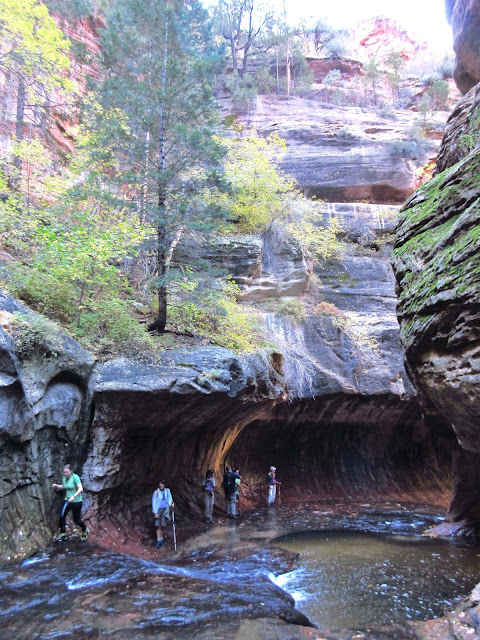 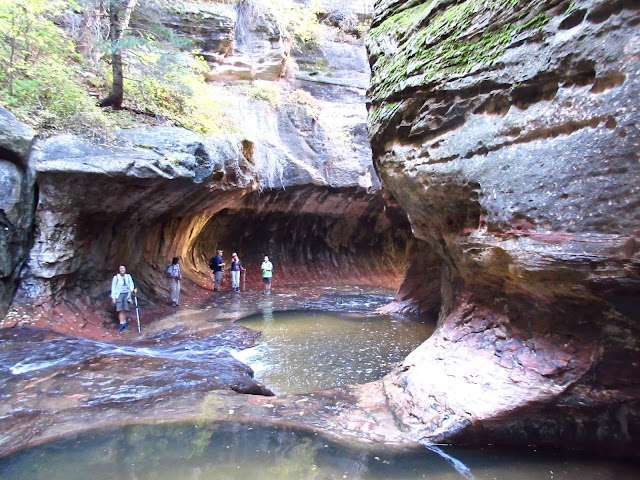 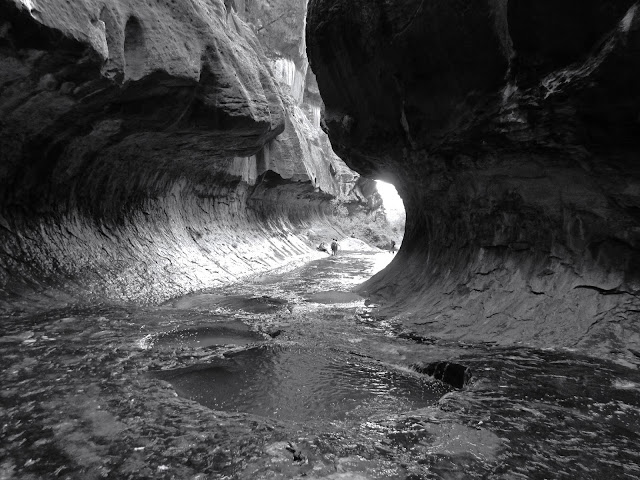 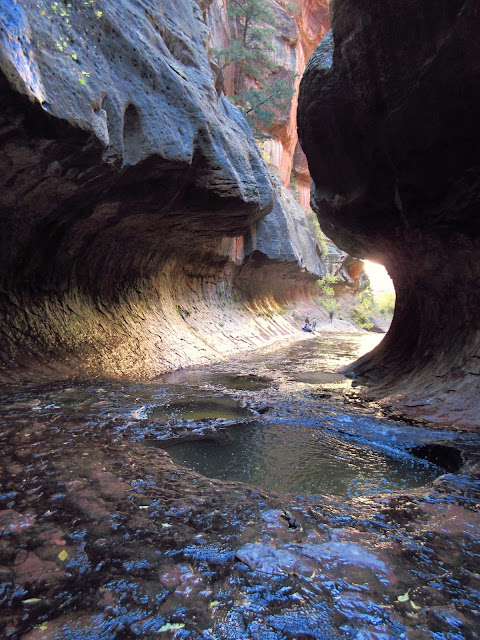 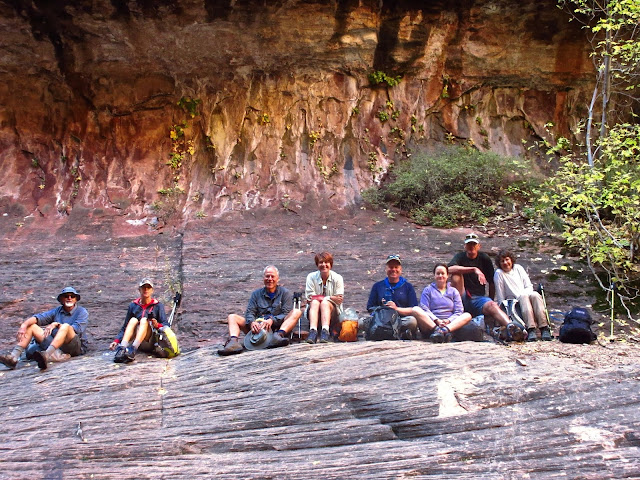 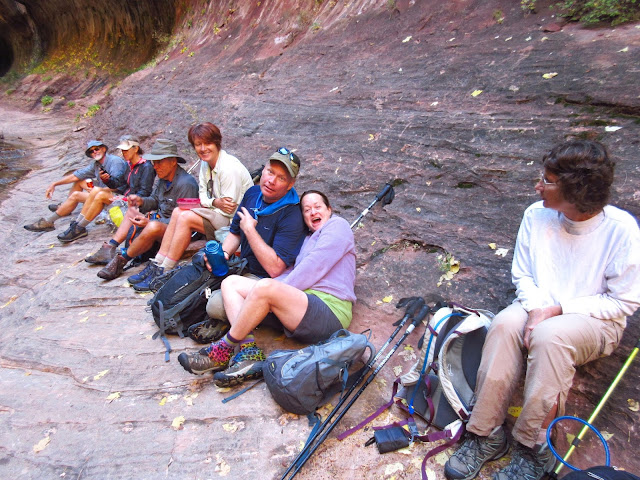 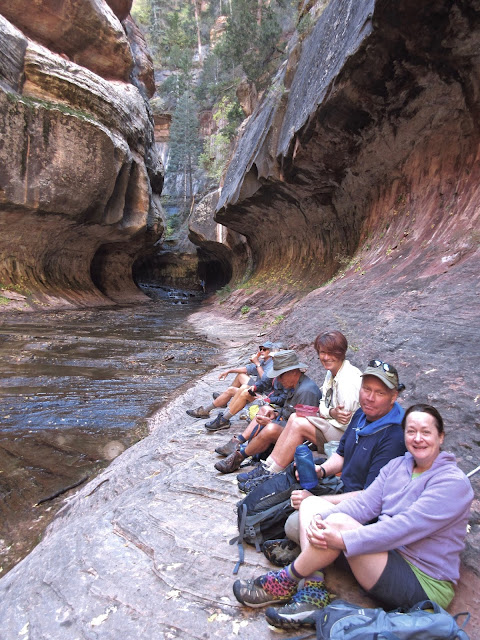 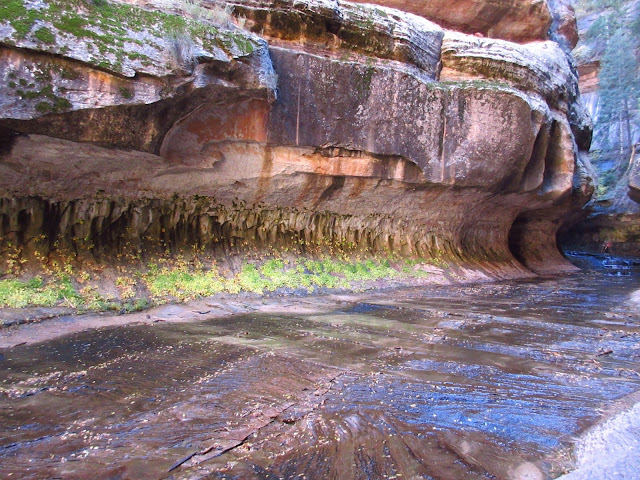 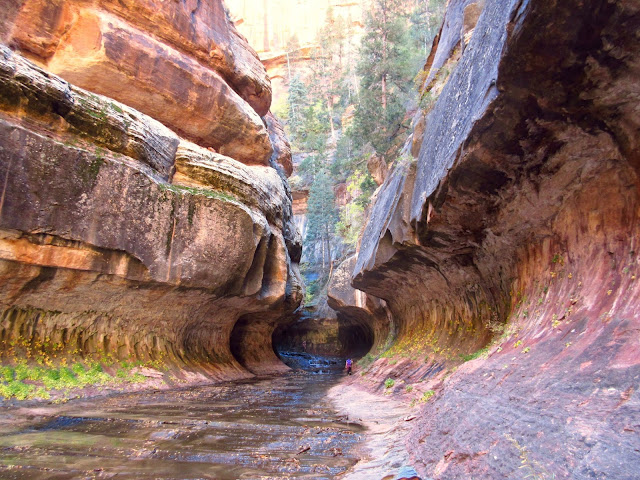 Heading back to the car... 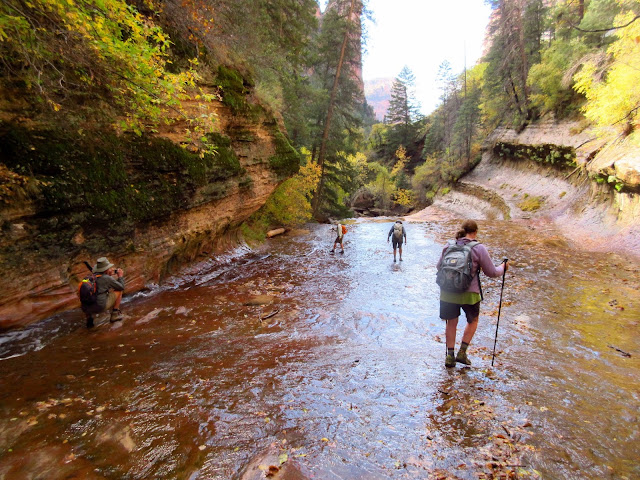 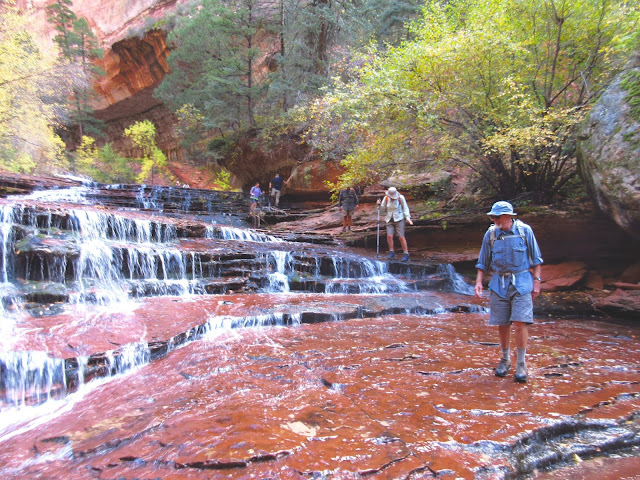 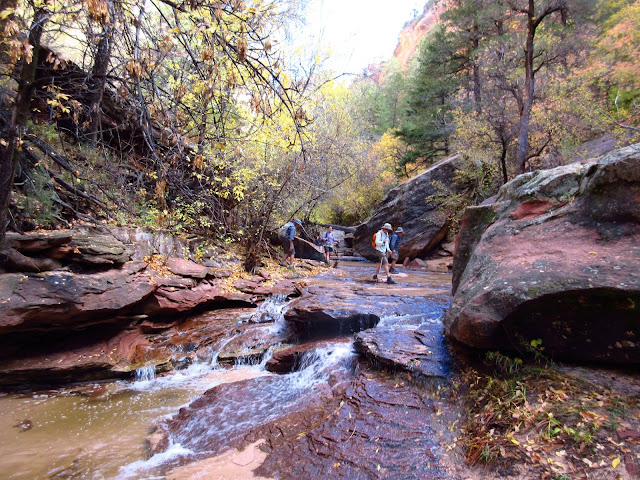 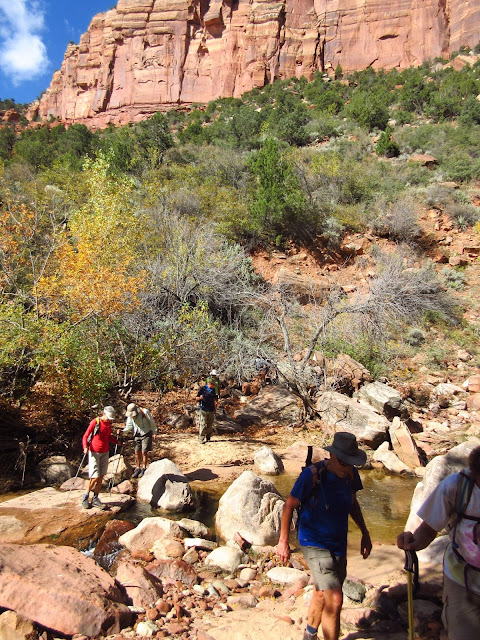 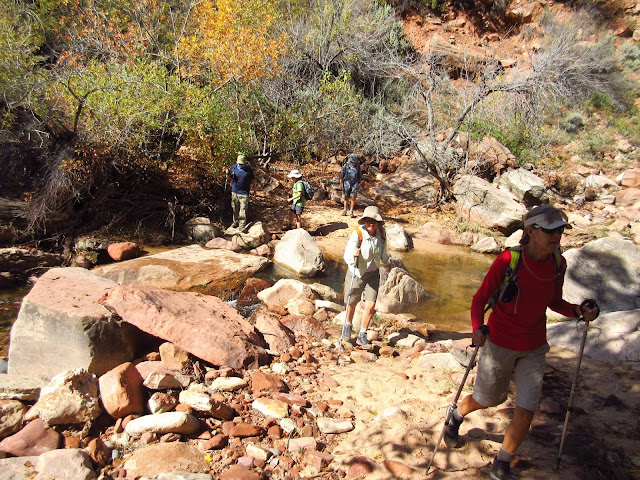 Posted by Box Canyon Blog.com at 9:06 AM