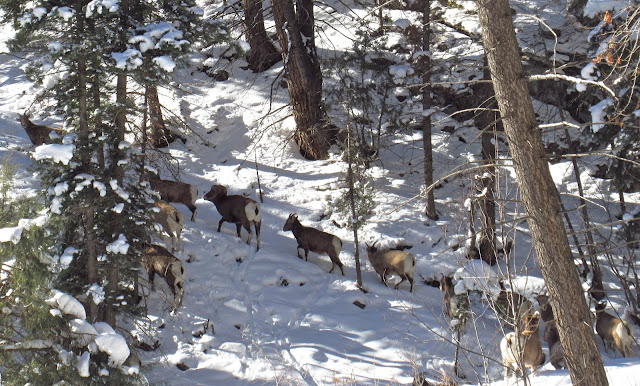 On a crisp, clear morning Bobbie and I waded a couple days worth of fresh snow... up Oak Creek Trail to solitude and beyond.

Light, fluffy powder sparkled with ice diamonds, glistening with all the colors of a frozen rainbow. We try to keep Oak Creek Trail tramped down enough to have it as a viable option for snow-hiking without wearing cumbersome snowshoes. This time, however, It was obvious that something had beat us to it. Bighorn sheep had already beaten a track in the snow, and adorned it with a steady trail of odiferous poop-pellets.

Heavy snows in the mountains push local herds of Bighorn Sheep down into Lovely Ouray every winter. They normally subsist on grasses and small woody plants like sage and willow. But it's easier to root through a foot of snow around town than the several feet that now blankets their preferred sheer-cliff habitat. They love to congregate in the town park next to the pool, where naturally occurring hot springs contribute to keep sprouts of grass somewhat green all winter long, even under snow. 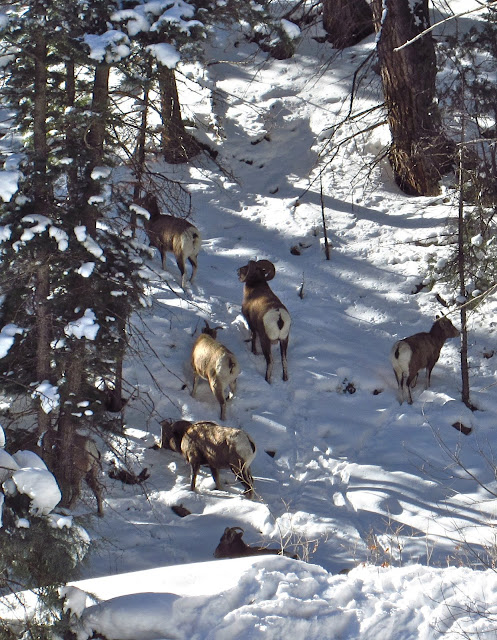 Mating season is winding down now, and so, too, the hormone-driven, head butting battles for breeding rights amongst rams. The crack of horns can be heard as much as a mile away when two big males charge each other at speeds up to 20 mph. What a relief it must be now that rams and ewes can all hang out together without a fight breaking out. Men…

Coming round a corner just above town, I was met face to face with a small herd of sheep, maybe a dozen in all. Bighorns are a curious breed, often approachable in winter after testosterone and estrogen levels have retreated into the "who cares" zone.

I froze; they froze. It was a stare-down, who would blink first? I slowly put a finger to lips to signal Bobbie and mouthed the words "Big Horn Sheep."  We studied each other at a distance of 75 feet. When I couldn't stand it any longer I reached for my camera. The group turned and headed up into the woods another 20 yards. Shit.

Soon they returned to breakfast, though, using hooves to scratch away snow in order to uncover a half-frozen meal. I approached; a few steps, pause, a few steps, pause. They were too busy eating to care… heads down, rooting around with their noses and hooves, all close together. It made for terrible photos, assholes and and backbones, not exactly the stuff of Nat-Geo. 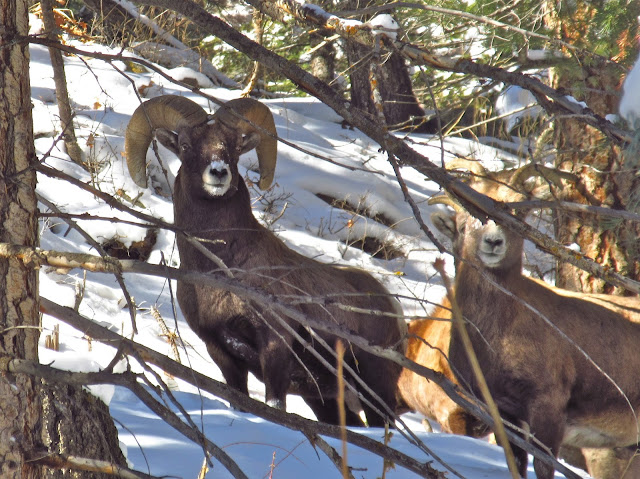 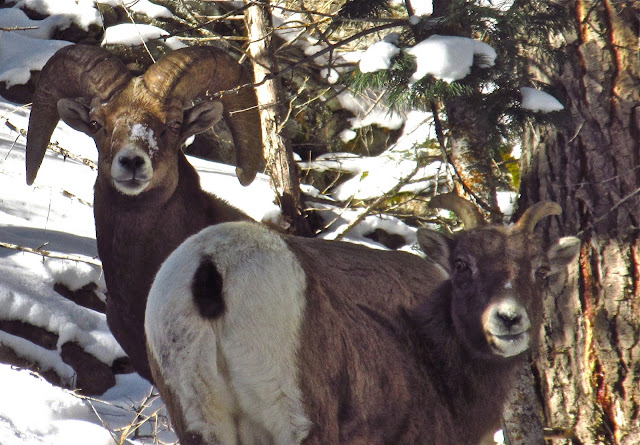 Gestation among Big Horn ewes is about 4 to 5 months. Come March/April they will be lambing nearby, then return to the high country along with the retreat of snow. There's a section of the Perimeter Trail that's off limits during spring due to its crossing through an area where momma ewes like to raise and feed babies. It's quite remarkable that "kids" are able to follow Mom virtually anywhere, even up cliff faces, as soon as a day or two after birth. Too bad our "kids" can't do that. I think I carried Caleb around for three years, and he was still a crash waiting to happen. 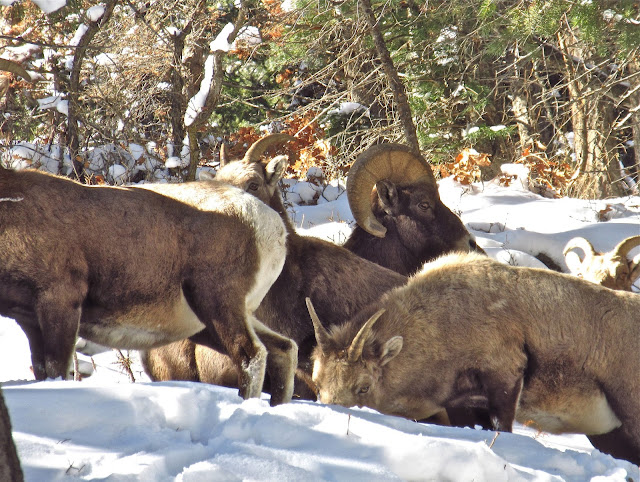 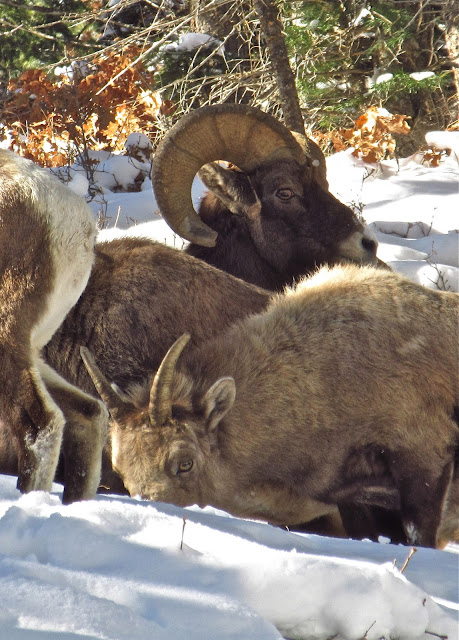 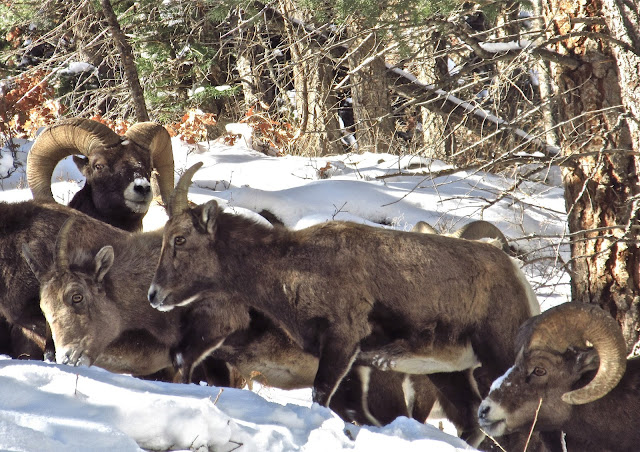 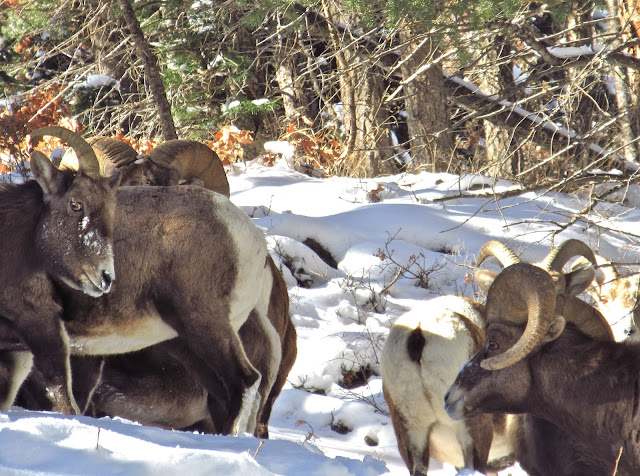 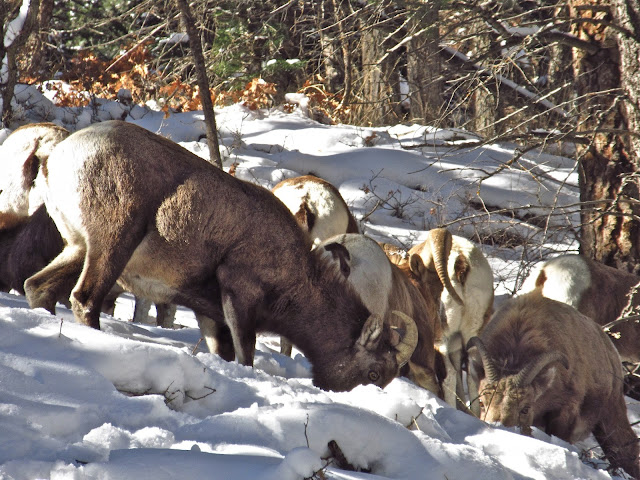 I especially love the photo below… the stately full-curl ram facing sun at just the right angle to show detail in the waves of growth in his horns. His harem stands by in shadow, curious about the weird guy in shorts wading through deep snow. 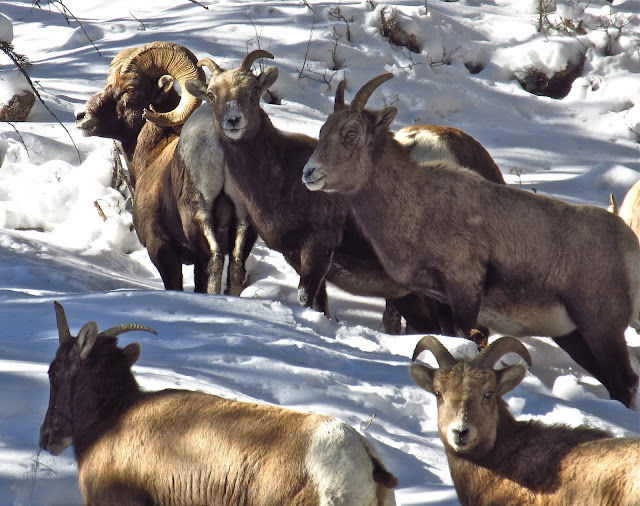 Then time to get back to our hike…  up, up, up, where snow begins to top my gators and freeze kneecaps. Bobbie trails behind, fighting her own battle with the snow. I stand alone, savoring quiet. There is no sound save that of a beating heart.

I put my hand on the camera's holster, ever at the ready. Perhaps a snowshoe hare will come bounding past, chased by a mountain lion or lynx. It will happen one day, it will happen. I must be verrrwy quwiet.
E. Fudd out! 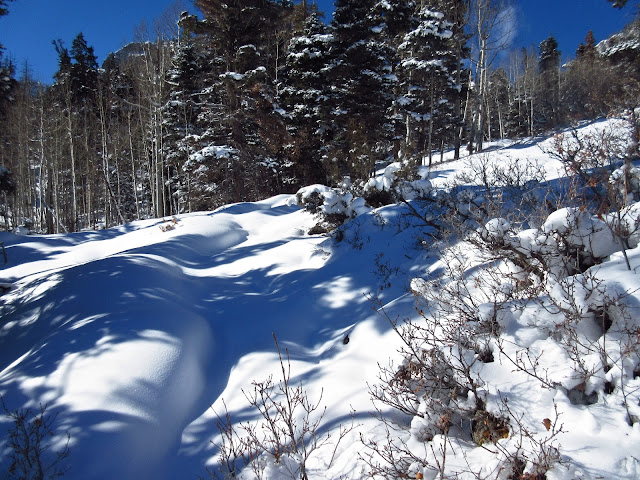 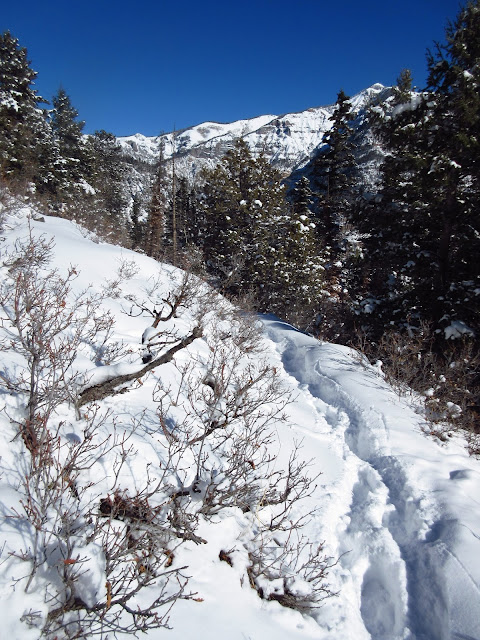 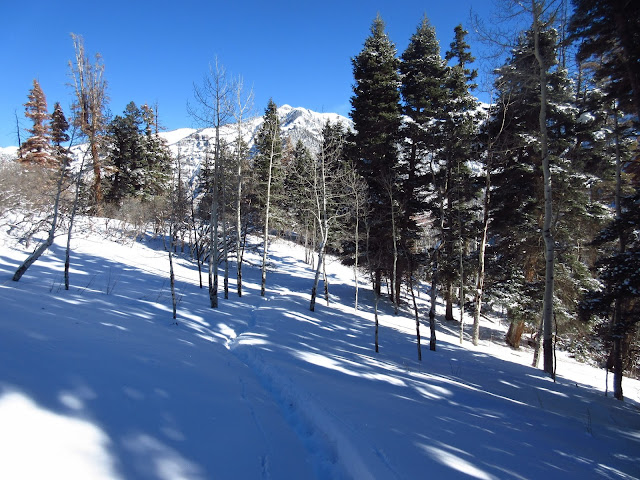 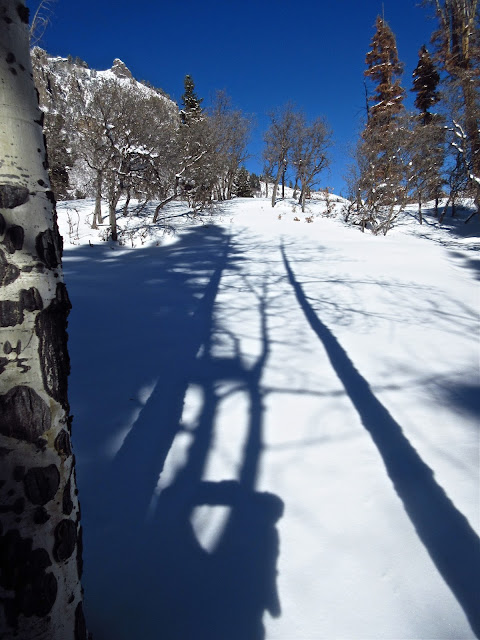 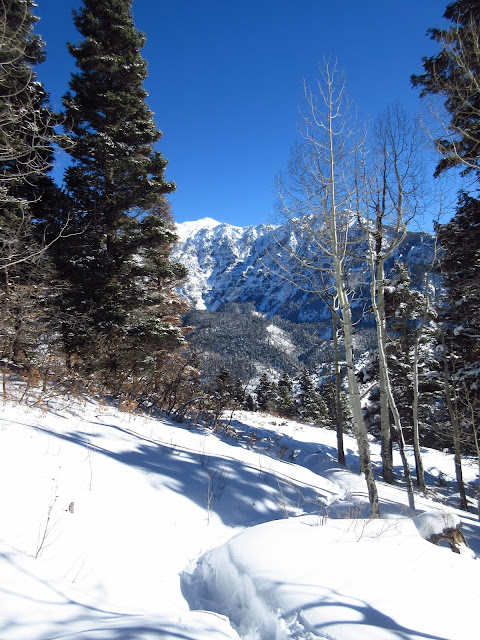 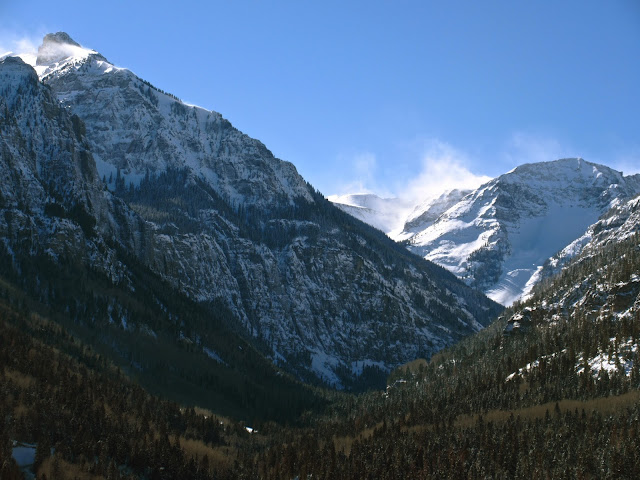