On "Change" and "Leaving"

"…Every person has to leave, has to change like the seasons; they have to or they die… seasons remind me that I must keep changing." Donald Miller

A final goodbye salute to the land of Red Rocks and Wonder. Hiking buddy Chris had long sense scooted on down the road and we missed him sorely. Then, the ultimate escape artist and last holdout, "Impermanent Suzanne," needed to heed the call of the road (sigh) and departed the day before Thanksgiving. …a lonely, unsettled vacuum descended upon "camp Zion." 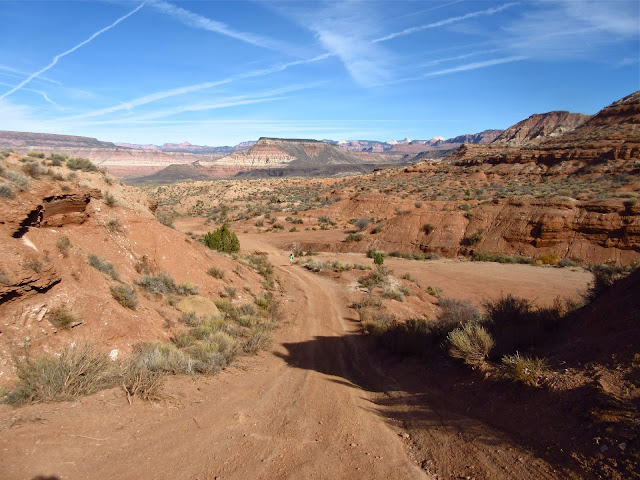 Left to our own devices, Bobbie and I decided to take advantage of the convenient spoils of BLM land located behind the RV park—literally thousands of acres laced with mountain bike-able dirt roads and miles and miles of single track… easy to advanced. 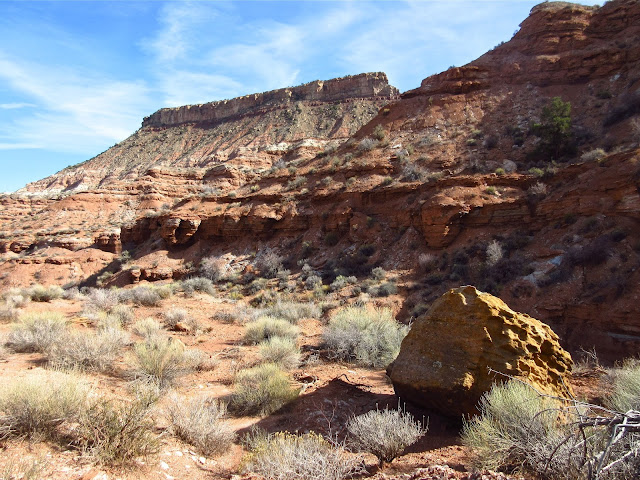 Last year the Gang went for a hike out in the BLM Bliss and stumbled across an old road/trail that zig-zagged it's way up to the golden cliffs of Gooseberry Mesa. Gooseberry is yet another area with an extensive network of mountain bike-able trails and backroads, someplace I intend to lobby the Gang to consider as an October destination next year. It is a mesa top much like Guacamole—treed with pinion and juniper and ripe with smooth boulders to play on. At one point in long-ago time Goosberry and Guacamole were connected. But the mighty Virgin River needed someplace to go and today they stand caved apart, separated by a couple of crow-fly miles.

On the eve of the park's annual Thanksgiving pig-out, Bobbie and I needed someplace to go, preferably a place that would give us a hard work-out. The trail up Gooseberry is about as steep and strenuous as they come. So we put our sights on the top and stepped out.


It's a gorgeous and to some extent surreal hike up to Gooseberry Mesa. The trail winds through precipitous foothills of dragon backed mountains, layered in colorful soils that remind growling stomachs of raspberry and vanilla sherbet.


One would never know unless they happen to be a fan of extreme sports, that the dragon-back mountain behind Bobbie in the above photo is the site of the Redbull Rampage Mountain Bike Challenge… the most extreme downhill race ever! (if one can call falling "racing") If you are acrophobic or have a queasy stomach, you may not want to watch the youtube clip of this years event. The Redbull Rampage is a Vertical Extreme sport where every rider wrestles with the knife-edge that separates Courage from Insanity and Life from Death. 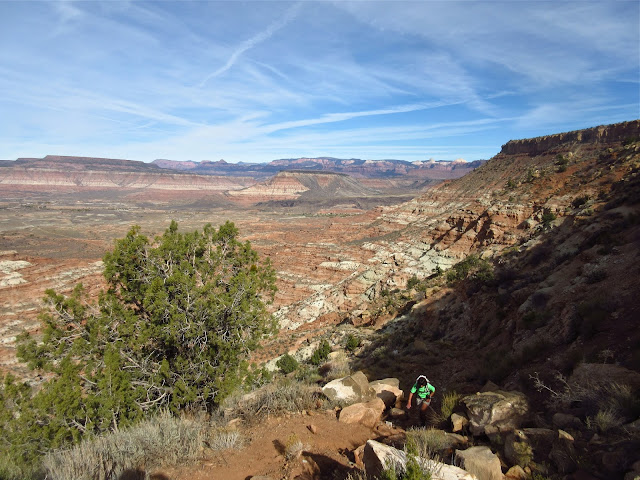 On a magnificent day, gossamer clouds flaring like wisps of cotton candy and making a patchwork quilt of Utah's impossible blue sky, we set foot to task. The temperature was crisp; the trail exacting; the air pure; the view impeccable with fine detail. Glory! It didn't take long till images of turkey and gravy and pecan pie danced in our heads.

Finally, teetering on the edge of a catastrophic caloric deficit—wildfires raging in quads and butts and sweat streaming faces—we snatched Gooseberry's summit from the jaws of defeat. 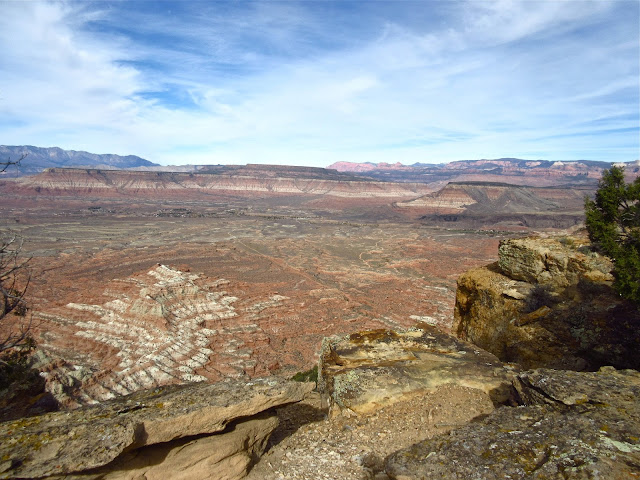 Wobbly legs escorted me to a fractured cliff-edge where bold crags jutted into thin air. The facets appeared golden, as if slathered with Dijon mustard. Blooms of iridescent green and orange Lichen proliferated like bacterial colonies in a well cultured petri dish. The humongous sherbet layered mountain that one hour previous towered overhead like the monster it is, now lay in miniature far, far below—harmless, melting under a noonday sun.


Of all the enumerable vantage points I've had the pleasure to experience in Zion and it's abutting glory, the far view from Gooseberry ranks near the top. I tried to imagine how one might to do justice to this eyeful of candy… beyond hunger games and food analogies. But, as you can see, my stomach got the best of me. 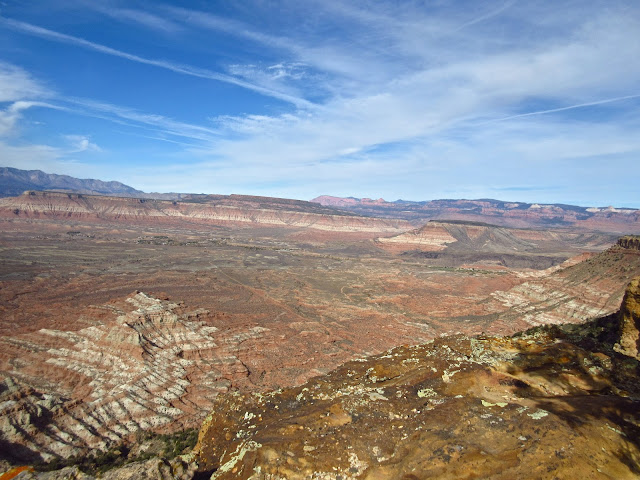 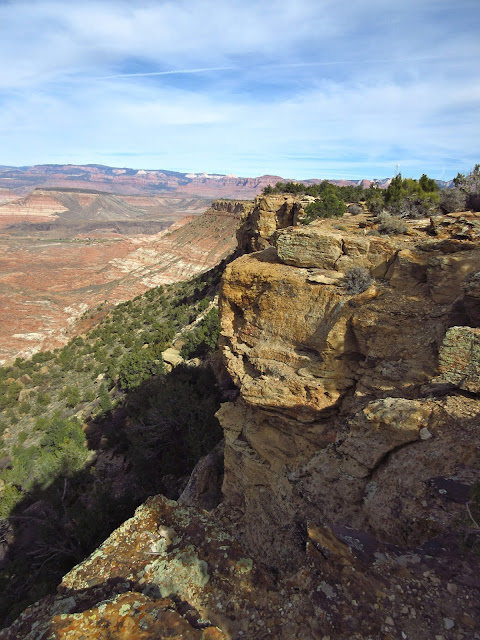 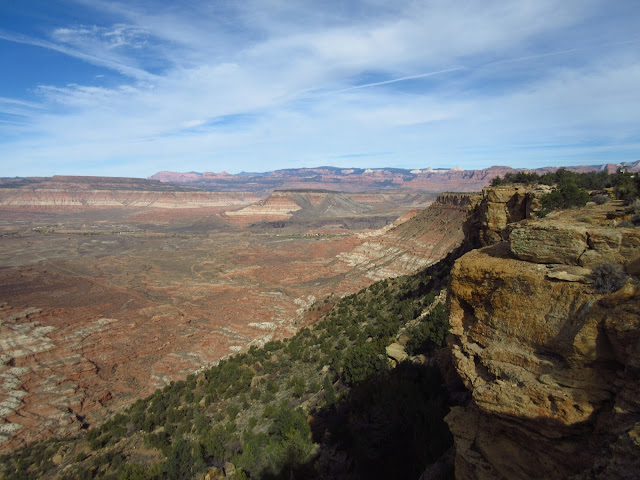 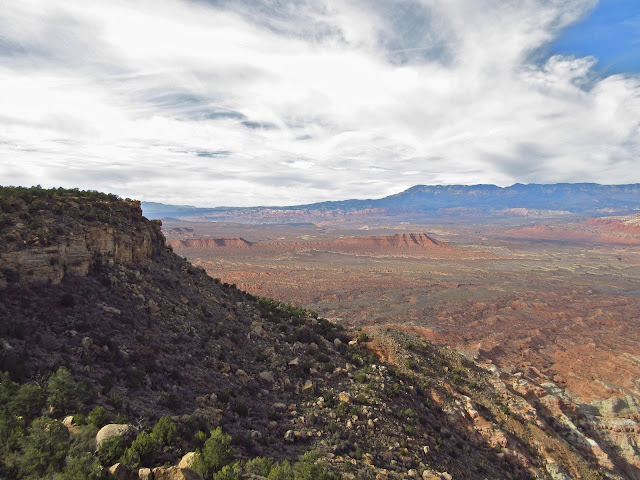 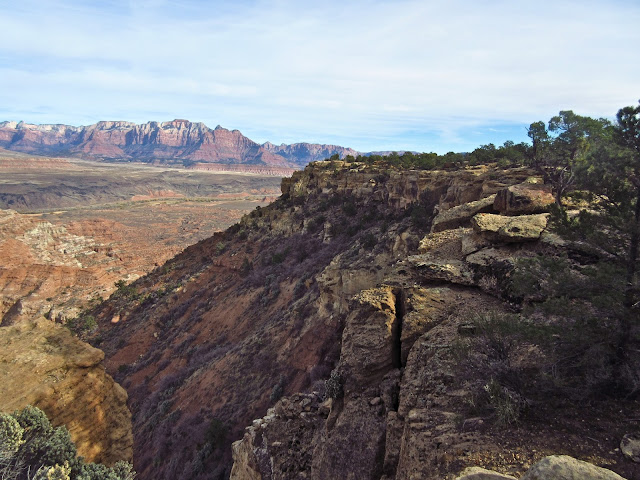 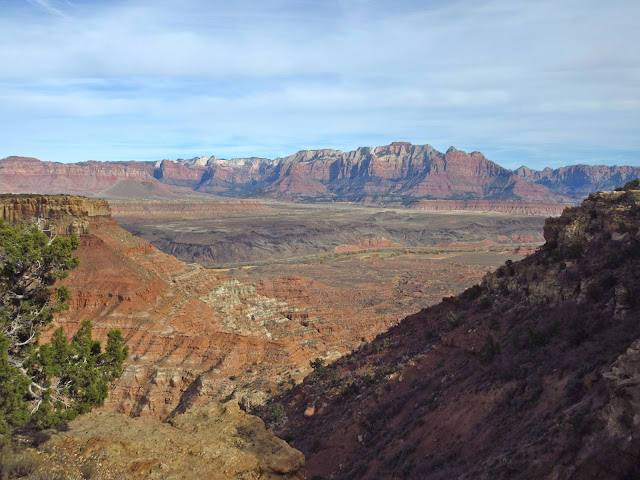 Bobbie and I continued north hiking along Gooseberry's enticing rim… weary, and taking note of all the miles that separated us from "home," now a mere speck in the distance.

Rambling on, we came across a cluster of rental yurts poised on cliff's edge. A half dozen or so high dollar mountain bikes leaned against cedar trees, along with a couple of unattended SUV's with rear hatches open. A burst of male/female laughter rang out from behind canvas walls and broke the silence. Afternoon delight, perhaps? We tiptoed around. 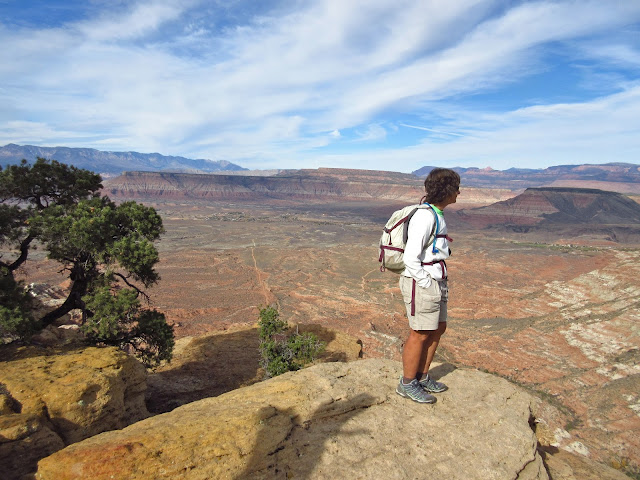 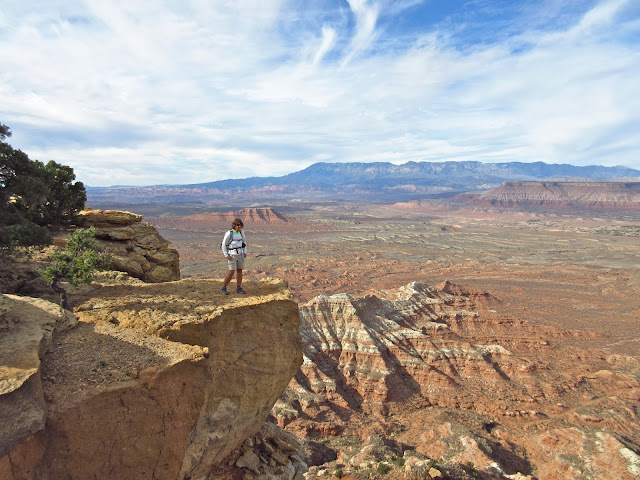 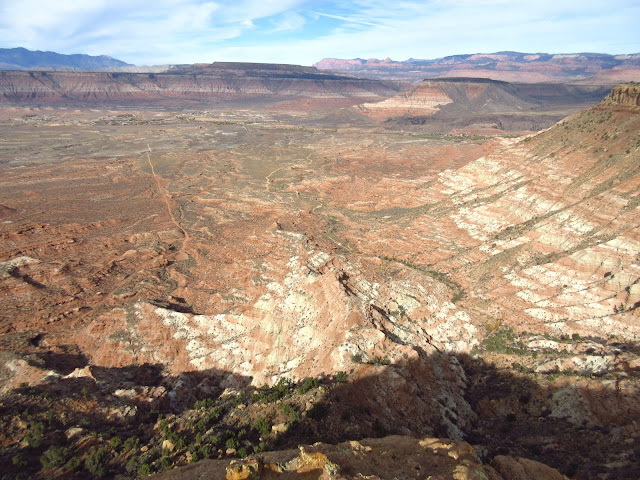 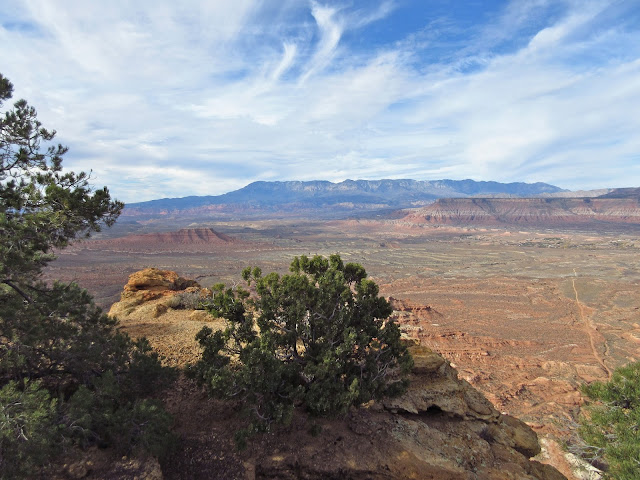 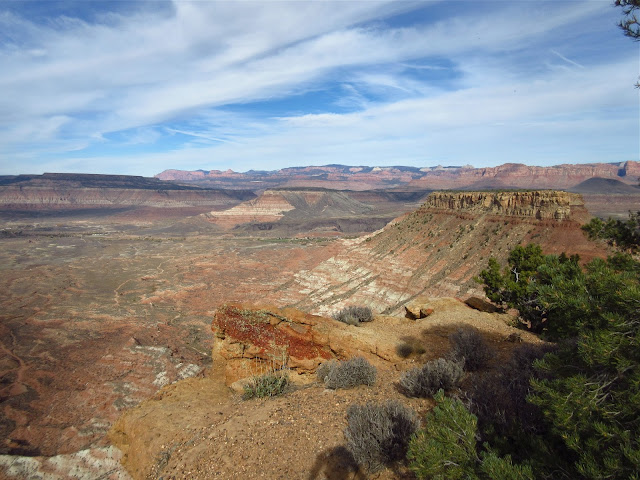 I write this post from "home" in Lovely Ouray, drawing upon fond, fragile memories and photos to help recreate our little adventure. It occurs to me that Bobbie and I are making progress on how to resolve the differential gap between our individual dreams. It involves compromise, patience, practice, with a touch of selflessness thrown in.

To me, the biggest drawback to living in a place like Lovely Ouray is enduring the transition between seasons. The time betwixt Ms Autumn's departure… after all her gold is spent and lies rotting into soil, and before winter's fresh whitewash of snow cleans the slate. Pennsylvania winter grayness  leaves me uninspired… adrift in a bleak mono colored sea. Same with the transition from winter to spring, affectionately referred to around here as "mud season," hiking dirty snow and gooey trails. Then early summer's transition, with its gale force winds and reluctant trees that don't leaf out till the fourth of July.

Transitional periods are to be endured. It's a waiting game, and such things have a way of spawning restlessness and inner turmoil. It is during these target times that I either need to be either highly distracted, or gone. Maybe I have allergies winter and darkness… especially in places where they seem to last for six months. Glass half empty, it can't always work out for us to dodge transitions times. Glass half full, "darkness" is oft the wellspring of creativity, be it pen or brush.

In the end we manage to negotiate compromise, which, as you well know, is an agreement where both parties come away feeling screwed :).

Here's wishing you all peace, love, and joy.
Have a happy Holiday and Merry Christmas,
Mark and Bobbie
Posted by Box Canyon Blog.com at 9:06 AM