Jamming With Joe and Tracey From Maryland...and The Much Rain Delayed Solar Install 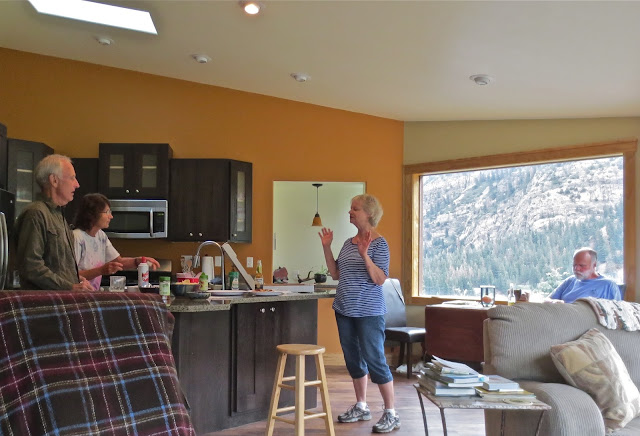 An email tipped us off that Joe and Tracey were headed cross country, all the way from Maryland, and planned to light in Lovely Ouray for a few days. Of course we planned a get together, one, because we enjoy meeting up with BCB readers and RV'ers, and two, because Joe was bringing along the new Yamaha Keyboard I've been coveting for over a year. So I went to the RV park to pick them up, toured their Lazy Daze...same exact model and color as ours, only a 2003...loaded his keyboard, guitar, and lovely wife...stopped for a couple of take out pizzas, and put all of a mile and a quarter on the Sue Bee. Ya gotta love the logistics of small towns :)

Our good friend John showed up from Montrose to dine and whine with us and we all got to know each other pretty quick and easy with the aid and accompaniment of a few beers.

It turns out that Joe is way good on the guitar and keyboard, and can sing, too, which put me back in my shell. "More Beer, please!" We jammed for a while, showing off our respective keyboards. After a while Tracey joins Joe in a few duets...and has the voice of a pro. More Beer, please.

Once upon a time, long ago, Joe had an audition with a band that was looking for a keyboard player. Being insecure, as most artists are, he made some excuses and tried to get out of going thinking he wasn't up to their expertise. But the band persisted and with great reluctance he showed up. It so happened that they were looking for a vocalist, too, and in walks Tracey, a lounge singer, and takes a seat by Joe at the keyboard. The rest, as they say, is history. It's easy to see that music is a common denominator...the "glue" that sticks and holds them together...that and a few precious grandchildren.

After long careers at the National Geographic headquarters, Tracey and Joe are now retired. Joe has been scratching his Itchy Hitch to go west with my blogs going back to the Artful RV Adventure days, so it was cool to finally meet up.

I can't keep up with pros, musically, but got in a few licks and was able to try out the new Yamaha keyboard. The Menu learning curve for a new keyboard (or any new device) seemed a bit daunting; maybe a few less beers would have helped. But the experience helped me to decide to hang on to my old Korg a while longer and save the expense; I just couldn't make the Yamaha sound as good as Joe did.

The hours flew by. Bobbie and I really enjoyed the easy conversation and getting to know these super cool nice folks that felt like they have known us for years.  I hope to cross paths again someday...if Tracey can tear herself away from grandkids :) Come on back anytime, and bring your music. 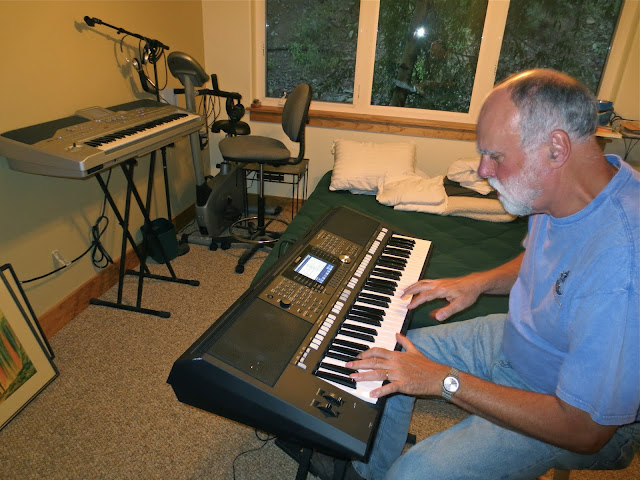 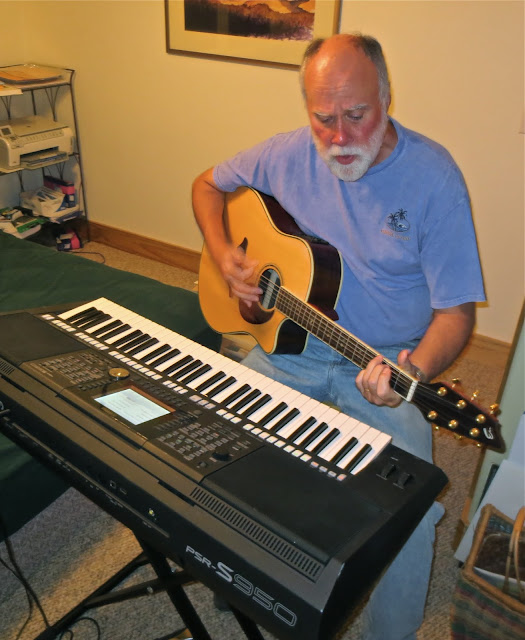 Now for a Solar Install update. What should have taken a first timer two or three days, has stretched into a week due to the daily monsoon spigot that has been flooding our state. No sooner would I climb onto Goldie's roof and the thunder and rain would start up. It felt like the most slow motion project I've ever encountered; extremely frustrating. 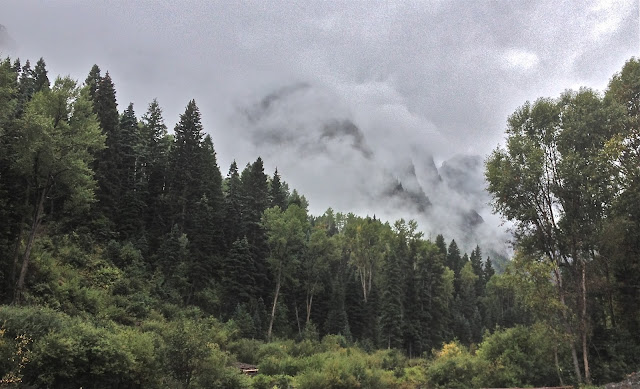 But I'm happy to announce that as of connecting the last few wires yesterday, the project is 95% finished...and I think (hope) it's working. Two of the panels are shaded by the house so I won't know for sure till I get into full sun. The Controller lights up and it's little charge light flashes, and the remote readout seems to be working; time will tell.
Knowing what I learned from the whole ordeal of ordering, installation, and studying directions like there was going to be a test (there was), I think I could now do the next installation in one long day or two, tops. I'm going out on a limb here because it is not yet proven to be a functional system, BUT....it's not rocket science. With the help of all the comments from readers I believe anyone with basic skills and a few tools can do a solar install with a little studying and perseverance. 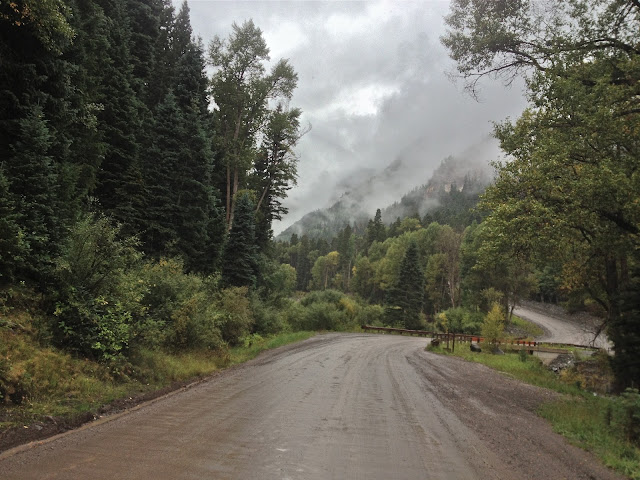 One thing I must say about ordering from AM Solar out of Oregon, they were extremely helpful and instrumental in matching a solar system to my budget, explaining what I did not understand, sending along instructions that were clear and complete with diagrams and photos, and having everything in "Kit" form so not one trip to the hardware store was needed. Ok, I did go once for some wire solder...because plumbing solder doesn't work on connections. AM Solar repeatedly told me that if I had any questions they are only a phone call away, and that is good to know and worth paying a little more...because Costco isn't going to do a thing for you after you walk out the door. FYI...Just so you know. 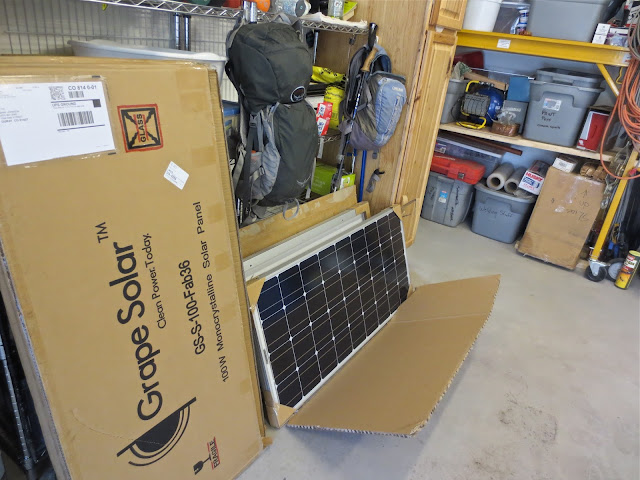 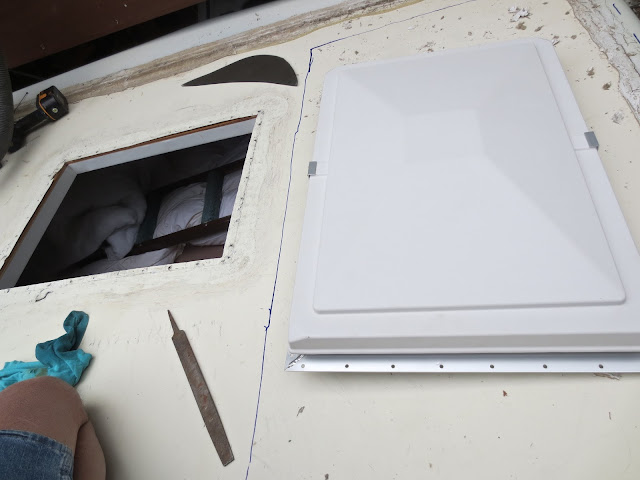 But first I had to replace the vent/fire escape over the bed. The previous owner had put a non opening piece of plexiglass  there where the vent broke. Bobbie felt like she might be trapped if there was ever a fire so that was the first order of business. Due to the wide angle lens used for this photo it doesn't appear that the new vent will fit the hole...but it did. Getting the old dicor sealant off was the biggest challenge. What the hell is in that stuff? 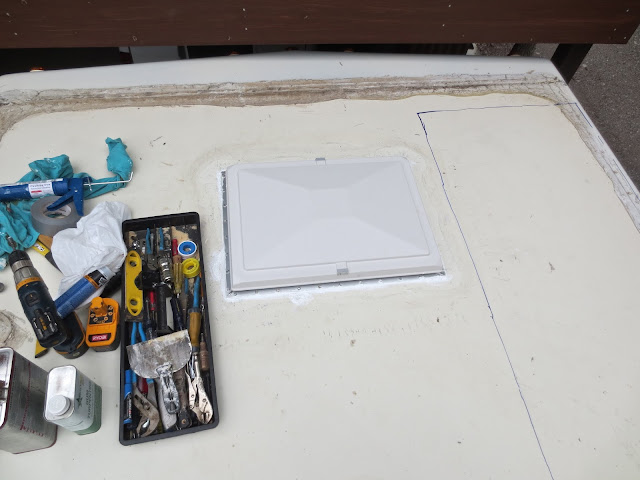 I had marked two places on Goldie's roof for the 150 watt panels, but changed my mind to 3 one hundred watt panels at the last minute. I'll have room for one or two more one hundred watt panels should we decide 300 watts isn't enough. I'm hoping it will do the trick as most of our camping is done in full sun. The real challenge will be camping in the northwest next year. They do not believe in cutting trees in campgrounds there...like the sun is bad for you, must be in the shade and cold all the time. 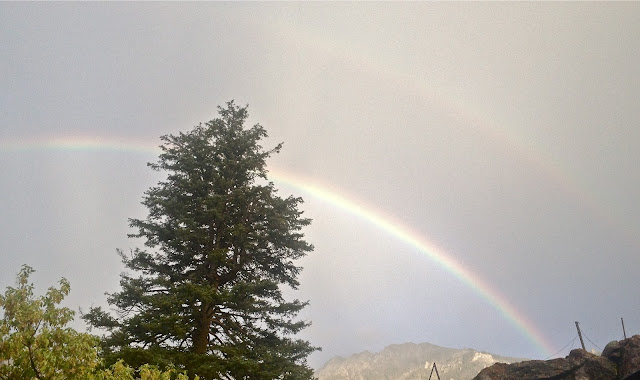 Below is the Combiner Junction Box where the three pair of # 10 gauge panel wires meet and are joined to another heavier # 8 gauge wire that goes through the roof and down to the controller box, preferable positioned as close to the battery bank as possible. Boy, did I get lucky...a one foot run to the batteries. Note the dicor goop to seal against moisture... 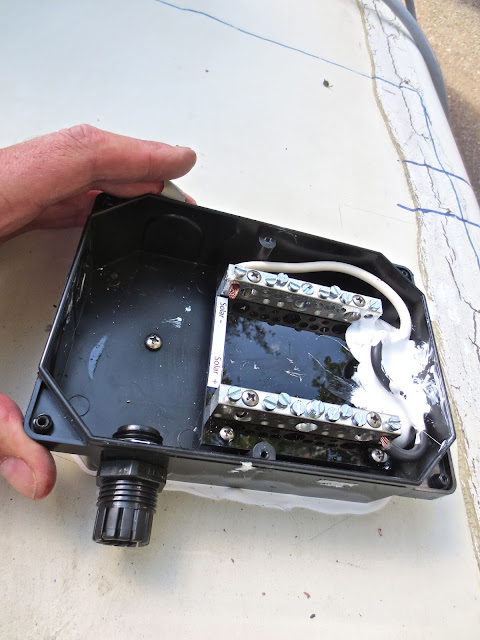 Needless to say, it gets a little crowded on the roof...especially for someone with size 14 feet. 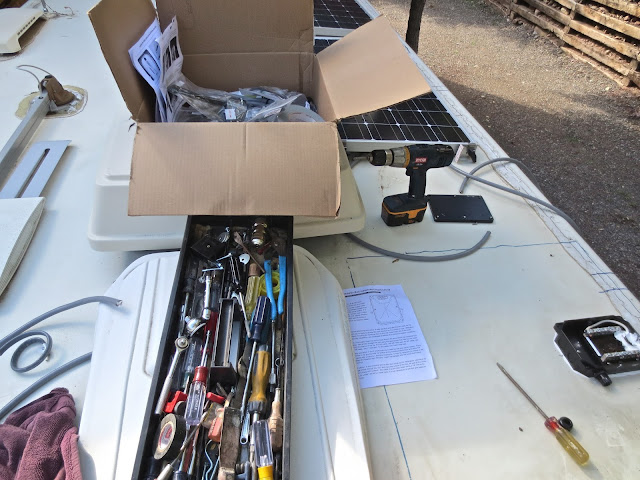 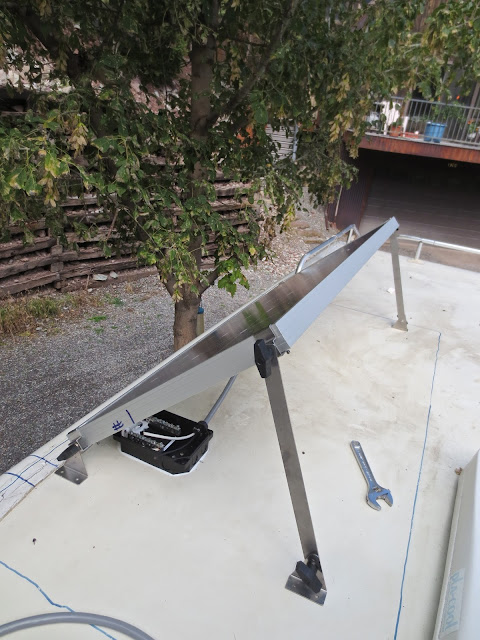 One panel up...three to go. 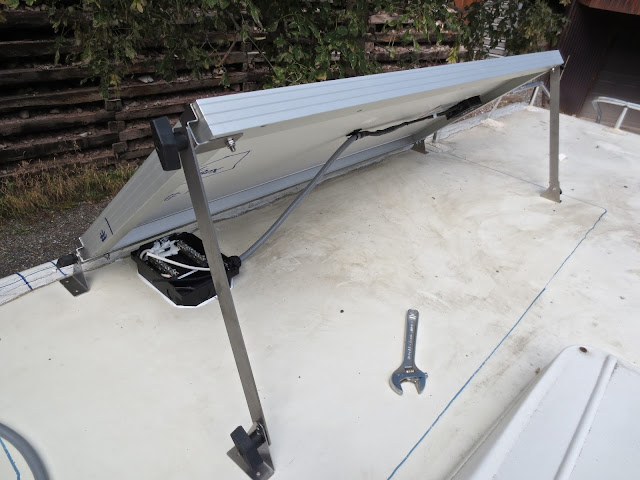 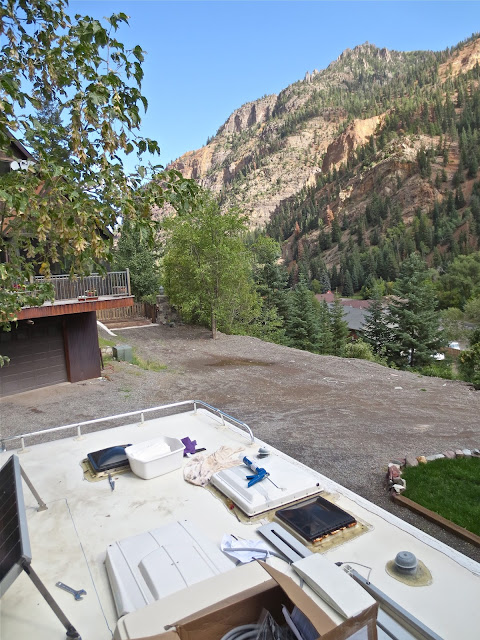 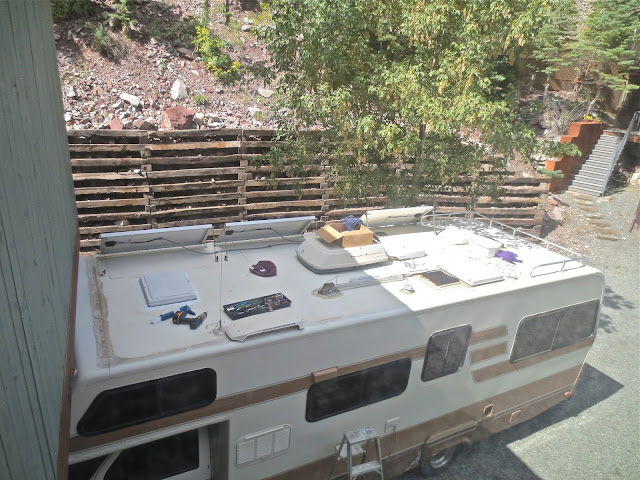 Shot from the upstairs bathroom... 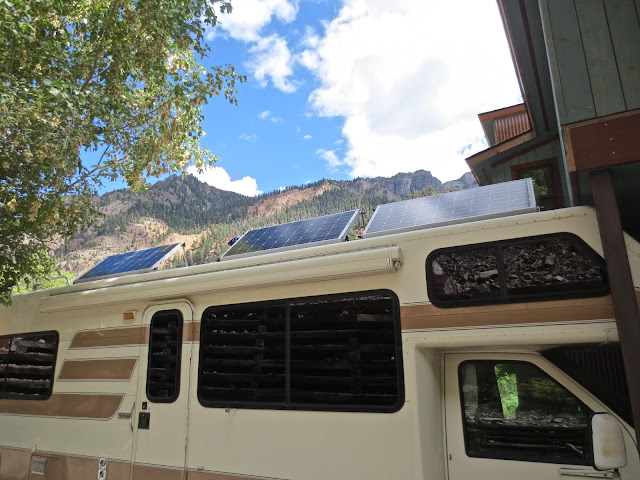 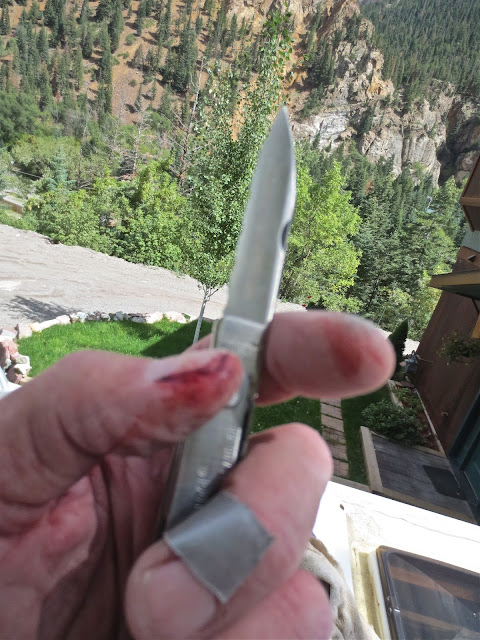 I found that really really sharp knives are dangerous, and that Duct Tape makes great bandaids. 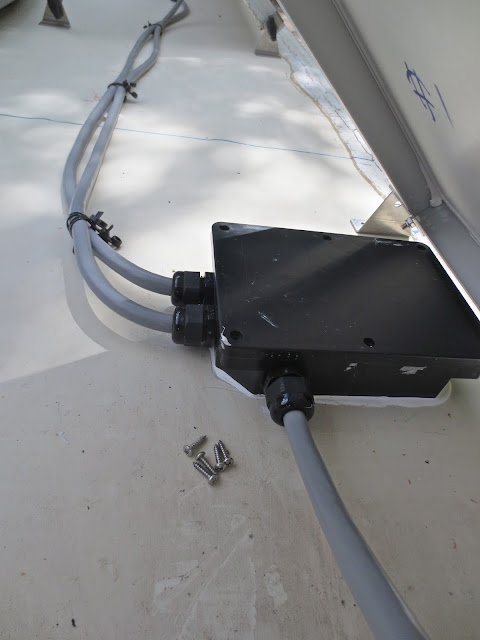 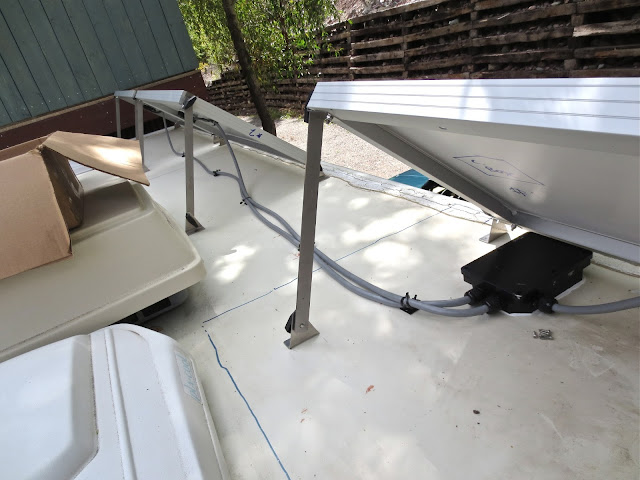 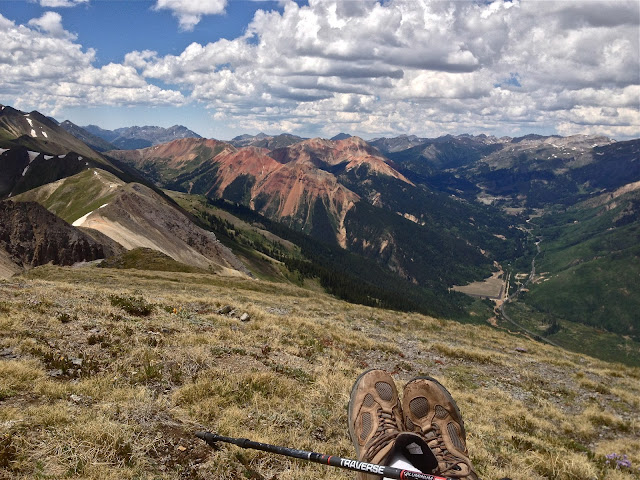 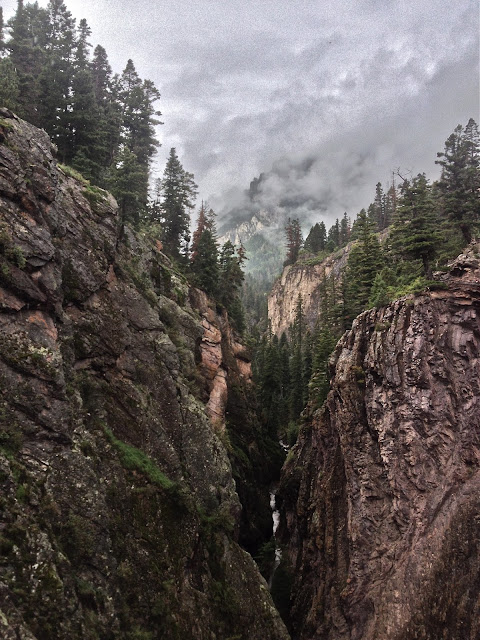 Next time I'll show you the inside job...
Peace Out
mark
Posted by Box Canyon Blog.com at 9:03 AM