Winter In The High Country: A Lesson In Perseverance and Making Lemonade From Lemons 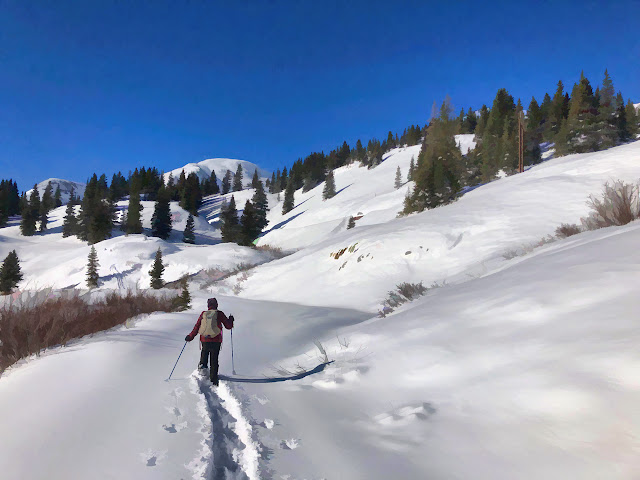 "Laughter is the sun that drives winter from the human face." Victor Hugo

I try to look at six-month high country winters as lessons in perseverance. Ok, maybe endurance is a better word. At best, they can make a person appreciate spring, summer and fall...not to mention, Rvs and Southern Arizona, which kinda undoes lessons in perseverance, but you get my point. At worse, well, let's just say I'm not fond of having to wear 7 layers of clothes. Long cold winters remind me of every injury I inflected on my body during my careless/foolish youth.

Currently, as I pen this post, Lovely Ouray is being gifted with its first blizzard of this up-to-now moderate winter. I pace expansive Imax Windows, peering down at a near invasion of C-DOT snowplows rumbling through town. They are out in force, intense blue lights flashing, shattering our blanket of white peace with the grating roar of metal on asphalt...heavy steel blades fling giant arcs of grimy slush to the shoulders of Main Street.

I can hear the laboring groan of diesel engines from a convoy of snowplows reverberate from our box canyon cliffs. They creep up Lovely Ouray's serpentine switchbacks, eventually fading from view in a raging blizzard. I do not envy the plow drivers task in storms like this. Clearing snow from the notorious, guardrail-less, shoulder-less Million Dollar Highway is not a job for the faint of heart. If it's a blizzard here in Lovely Ouray, what must it be like on Red Mountain Pass?

For once, the weather-guessers get it right. Two days and two nights it storms. Unnerving gale winds blow with such ferocity that it rattles doors in their their latches, enough to keep us awake at night. Windows freeze shut. Not that I want to open them during a blizzard...unless there is a fire. I dream up alternative escape routes instead of sleeping.
The storm is forecasted to be a fast mover. Ha. The morning of the third day the snow abates and wake to clear skies and temps hovering near zero. As I'm known to say: If the sun is out, temps are irrelevant. Except when the wind blows. 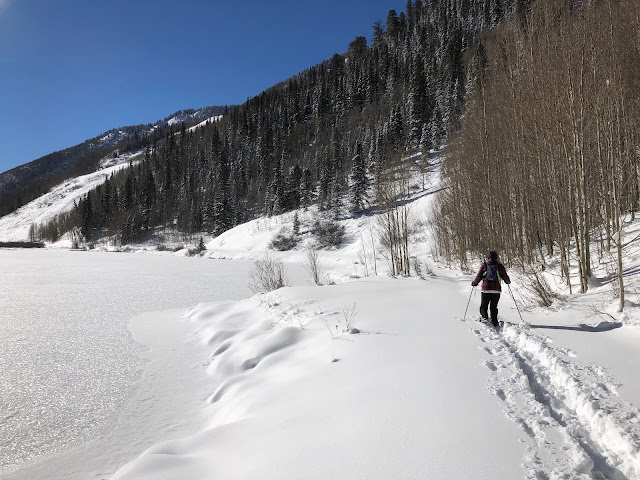 And blow it does. We watch clouds of snow swirl like smoke from peaks above the Amphitheater. I cry out in anger and disgust as I pull on long pants; Where's the fucking calm after the storm?
Bobbie and are determined to snowshoe, maybe head up Red Mountain if the snowplows have done their job. Even a short trek is better than nothing staying indoors, especially when a brand new pair of Atlas snowshoes await a debut. No more fussing with Rube Goldberg hose clamps that jury-rig broken bindings to the frames of old clunkers. Good riddance! 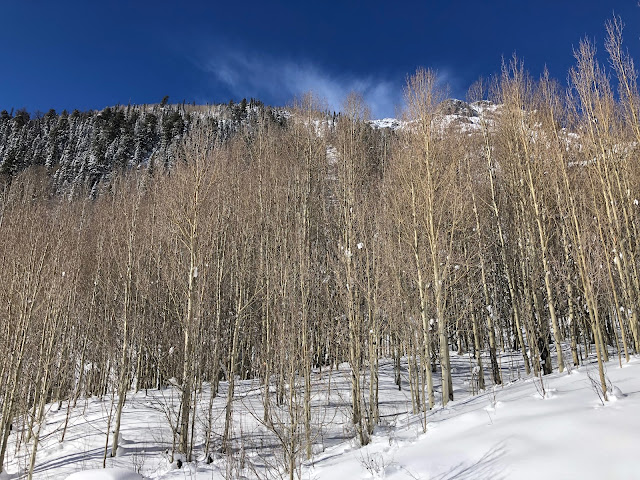 Two thirds of the way up Red Mountain we decide to give Crystal Lake a go. No parked cars. No tracks. No people. Perfect! 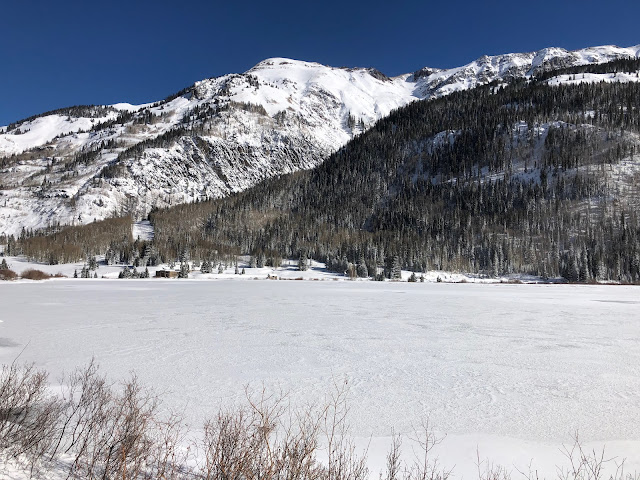 The lake's froze over. A rough coating of crusted wind-blown snow and ice chunks the surface. So much for ice skating. Where's a Zamboni when you need one?
I comment to Bobbie between elevation induced huffs and puffs: Maybe we'll see a moose! Just putting it "out there" pretty much assures the wildlife gods will zap our hopes. 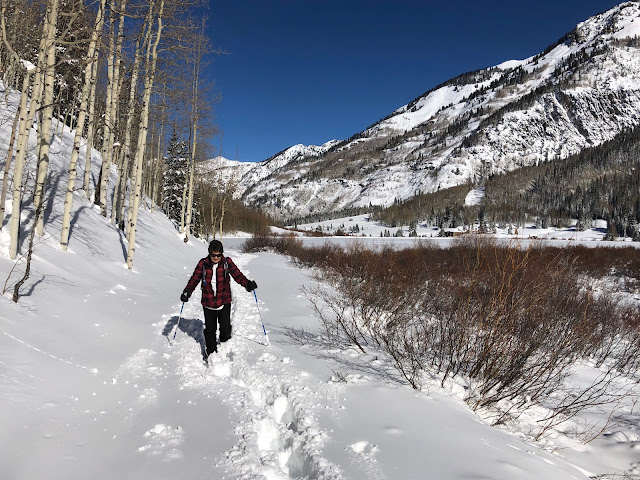 We wonder why we're huffing and puffing so hard at 10,000 feet when recent hikes are upwards of 11,000 feet.
Finally it dawns on us. It's the snow...not the normal light and fluffy kind we are accustomed to this high up. No, this storm came in from the west instead of north. It makes for a warmer air flow...which makes for heavier snow...which makes more work of snowshoeing. Gale force wind doesn't help. It drives snow to form bottomless drifts, turning backcountry outings into aerobic workouts. It's like wading wet cement while wearing leg weights. Wind reshapes snowflakes, rounding them into tiny ice balls that pack together like sand. Ugh.
We take turns breaking trail around the lake till, ultimately, we reach a mountainside slope that stops us in our tracks. It's sketchy steep, and shows evidence from previous avalanches. Aspen trees litter the slope, snapped like toothpicks. Another pile rests way out on the lake. It doesn't feel like a good day to die, I say. We beat a retreat to safety.
I suggest going back to the dam, maybe try to punch up through woods on a  trail we hike during summertimes. It winds around and up through a dense forest of trees, climbing steeply and narrow. We're never sure when we're on it and when we're off it. Look for cut logs, Bobbie says. Good idea.
The trail doesn't waste any time. It quickly steepens to a point where progress is measured more in inches than feet or miles. The higher we rise above the lake, the deeper the snow. Now it's up to our knees. 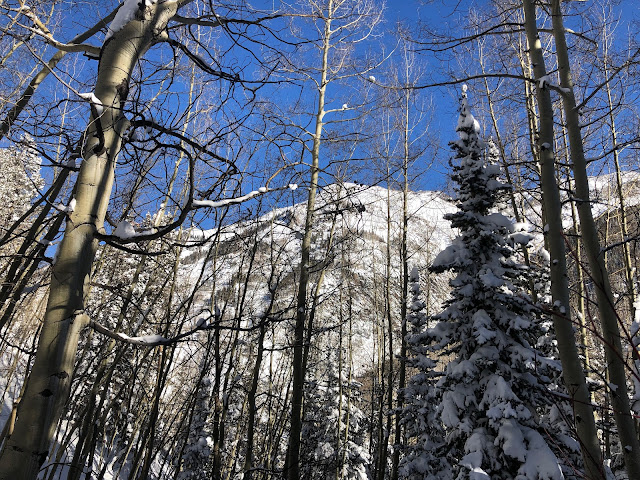 The next day, and, apparently, no worse for the wear, we return to Red Mountain, this time a couple thousand feet higher. Our snowshoe adventure departs from the "pass," 1l,000 feet. Still, it's all up hill from there.
Snow conditions are much the same as Saturday, only deeper...much deeper. In places, drifts have us struggling to get out of waist deep snow. 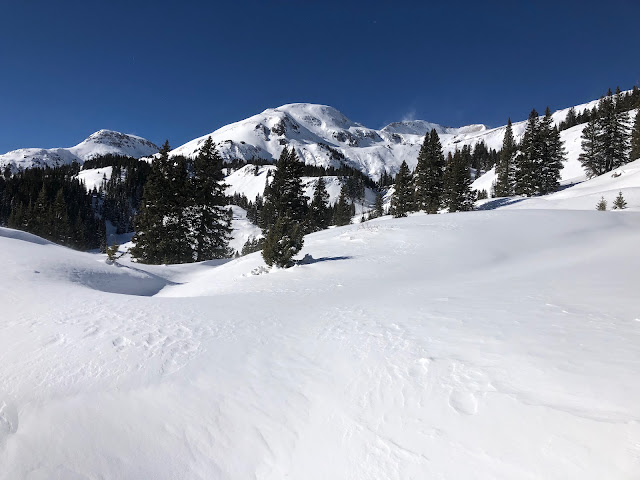 In some photos you can see clouds of snow blowing off the peaks. Others, where ground blizzard threatens to stall us out. 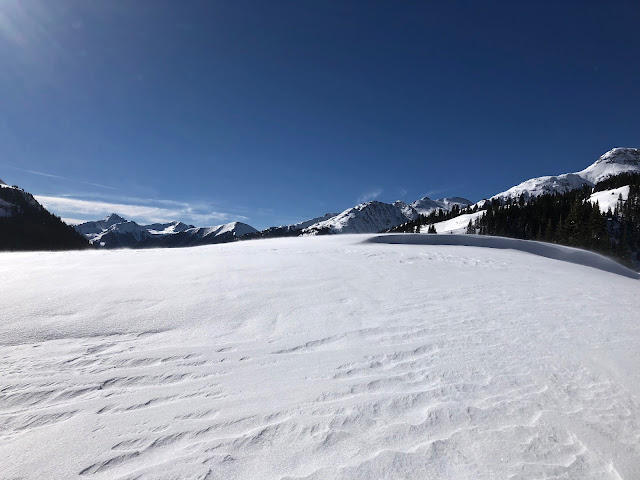 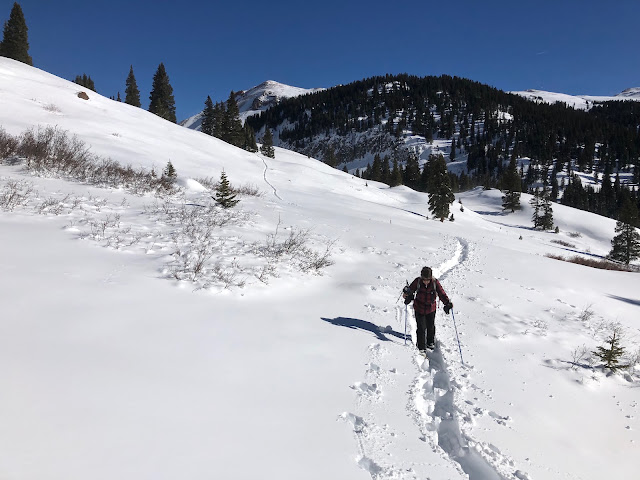 Winds had blown much of the snow from portions of the trail, but it was impossible to dodge the resulting drifts that eventually followed when we least expected it. 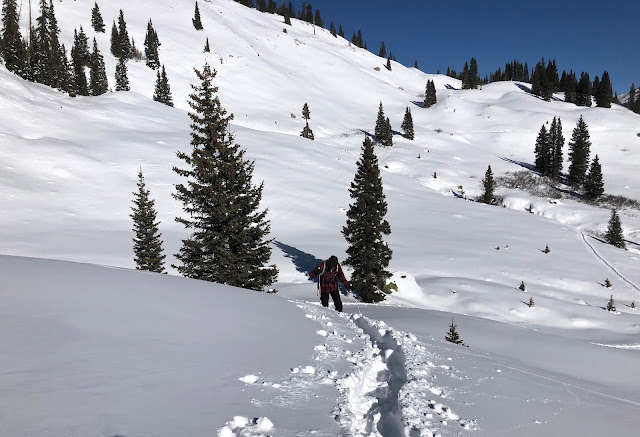 Winded from uphill wandering, I pause and take in our surround. God. It's "Christmas Card" gorgeous up here, especially when we have it all to ourselves. 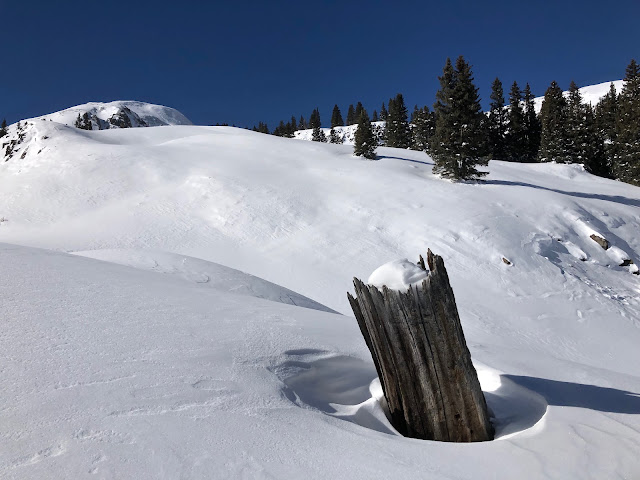 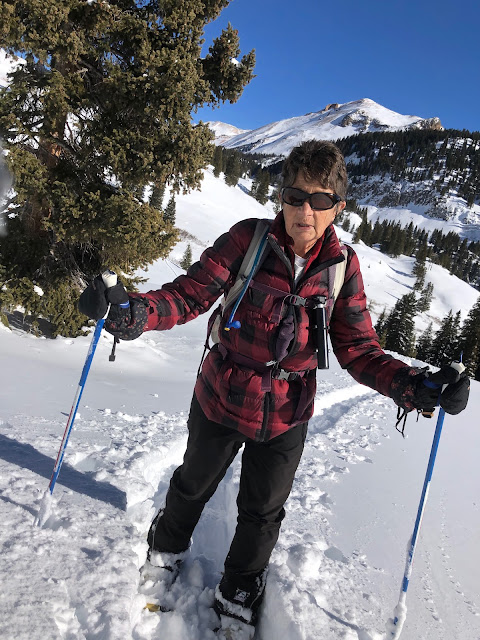 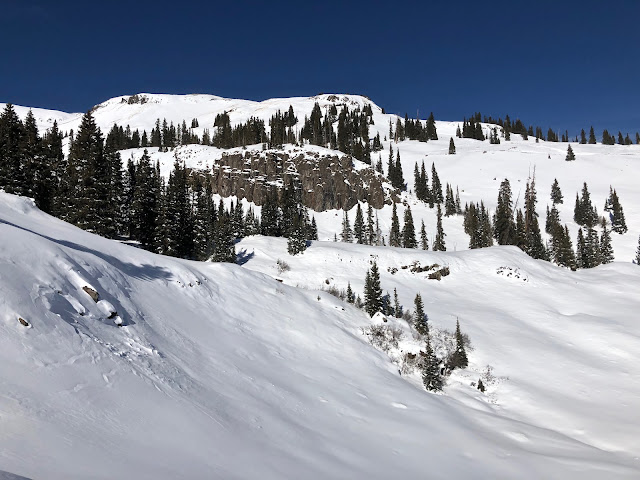 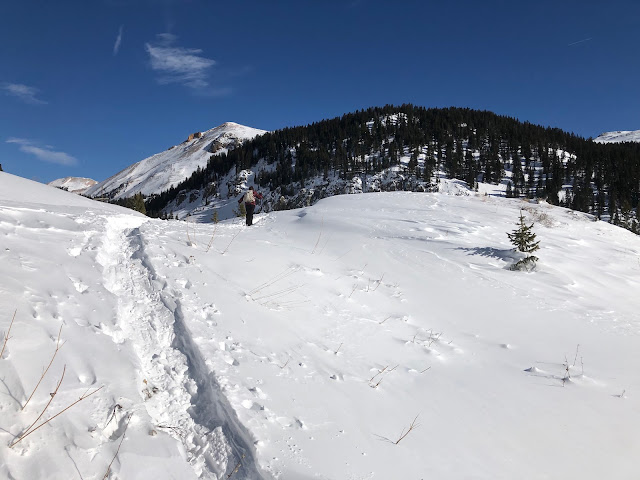 We reach a high point beyond which slopes look sketchy. We notice a couple of slides, in the trees. We tromp down a flat spot, take off our packs and plop down. We laugh, wondering if we will be able to get back up. Bobbie breaks out a Thermos filled with a mix of coffee/hot chocolate. Eyeing the slopes and slides I offer, "Think we've painted ourselves into a corner." Anything beyond this hill is rife with avalanche danger. Time to turn around. 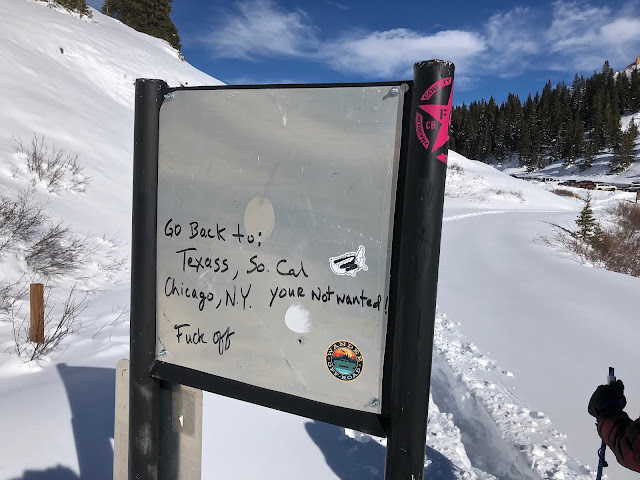 Almost back to the car, we notice a rather personal comment on the back side of the Black Bear Pass Road sign. Some people seem to want to move to Paradise and lock the gate behind them. I doubt they're "natives." The only true natives are on reservations. On the way back to Lovely Ouray, we spot two bull moose. The bigger one on the right seems to be saying something to the smaller one: Can you believe we're going to be eating twigs for 6 more months?

What would your caption be???

Mark and Bobbie...PS: Another snowstorm blew through. Tomorrow is Saturday and the forecast looks agreeable. We'll head back up Red Mountain and see what kind of mischief can be found...Sunday, too, maybe!!!

Posted by Box Canyon Blog.com at 8:14 AM