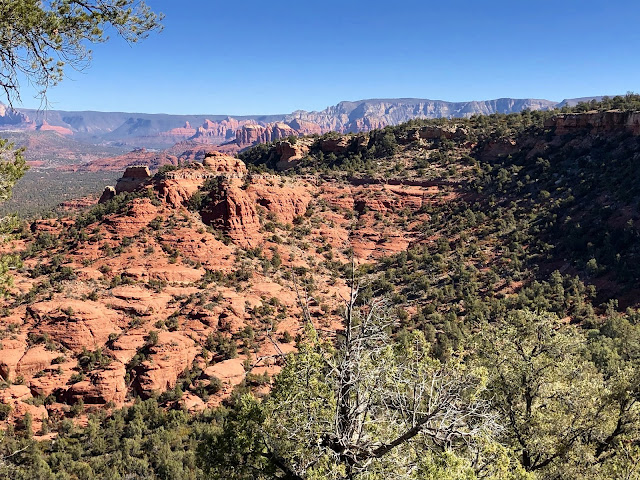 HEAVEN
It's not like I didn't know what was coming. I'd already failed at completing this loop a decade or so ago, back when I was younger, stronger, and, some would say, better looking, less bald, taller, smarter...the list goes on.
But ten years later and ten pounds heavier, a balding geezer who's once subtle smile lines somehow eroded into canyons reflects on the reality and horror that a mere decade can inflict on one's appearance after 60 relatively benign years.
Then, as now, our boondock is located a few miles removed from the Village of Oak Creek. Once a heavily guarded secret, "our spot" had been found by the burgeoning Rv/van-tramp world. Seems Boondocking is fast becoming a competitive sport.
Being late adopters of GPS "apps," Bobbie and I used to pour over weathered and ratty assortments of paper maps in search of hiking and biking opportunities. Unfortunately, the only thing we found near our "secret" boondock was a lone Forest Service Road about a stone's throw from camp. Fine, Better a Road than aimless Bushwhack.
I think it took a couple/three seasons before we finally hiked the five miles to where that Forest Road ended at a bouldered cliff-face with a view. We plopped down amid car-sized rocks and gazed at one of the most spectacular panoramic views of Oak Creek Canyon we'd ever found. We deemed it worthy of every stumble and drop of sweat it took to get there.
Nowadays, that trek to glory is as much a tradition as turkey is to Thanksgiving...to either hike or hike-a-bike those five monotonous, rocky miles for that balcony seat view of Oak Creek Canyon's fiery landscape.

Those early paper map studies eventually revealed something I'd overlooked, that the "dead end" forest road to "Glory" had a minor "spur" near the end. With magnifying glass in hand, it appeared that "spur" wound around and down House Mountain to a point close to Turkey Trail. Having hiked that trail a few times, I was familiar enough to know that its trailhead was near the Village of Oak Creek on Verde Valley School Road.
That night in bed, I wondered if I could make a grand loop ride. Could I find Turkey Trail if the Forest Road did not connect? Then I remembered something my dad always said, while wandering Arizona's dirt backroads just to see where they went: We won't know if we don't try. I think he feared not trying more than failing. We got stuck (literally) in some real predicaments, but always seemed to make it home.
My first "ride" attempt was on an old Trek 29er hardtail. That's another way of saying it lacked rear suspension, nothing to cushion brutal blows to butt and back from a course that turned out to be riddled with volcanic rubble. To add insult to injury, the 29er's antiquated front shocks had all of 2 inches of travel, basically a couple short rusted springs, one of which was broken.  It was a bike from the stone age when compared to today's bikes, with their long-travel adjustable hydraulic-dampened suspension systems. Needless to say, progress on the rubbled House Mountain "spur" was something akin to a snail's pace.
It didn't take long for the pounding and pushing and crashing to evaporate my gung-ho bravado like so much red dust in the wind. It was a humbling experience to be beat into submission by that trail, one I vowed to never forget.  I finally made it to a Wendy's in the Village of Oak Creek, where I called Bobbie and begged for rescue.
The photos pretty much speak for themselves. If someone would have shown me a photo of what I was in for, I would have taken a "rain check," because, well, as we all know, it seldom rains in Arid-zona.
So why, you ask, would a sane person ever want to reprise a trail that kicked their ass, especially a decade later at 70 years old? Perhaps Mark Twain said it best, “Sanity and happiness are an impossible combination.” I could be wrong, but I take this to mean that, in order to be happy, one must do insane things. Besides, what have I got to lose? Should I somehow succeed, the ride would strengthen my body and the challenge would strengthen resolve. Something we all could use, right?
I believe that, without challenge, a person devolves. In fact, for me, anyway, challenge is what gets me out of bed every morning. Facing challenges, especially physical ones, promotes a sense of confidence, self-worth, and satisfaction. It doesn't have to be a physical challenge. But for reasons I can't explain, the older I get the more I prefer physical challenges over mental ones. Challenge keeps me in the present, the only time that really matters and a place where past is forgotten and future is irrelevant.
As I prepped for the ride, Bobbie asked how long I thought it would take. Well, barring a breakdown or crash, I'd like to do it in under four hours. But give me five before you send out a search party.
I regretted interjecting an additional challenge of "time" as soon as it left my lips. I'd be doing well to even finish this loop, let alone do it in under four hours. Nothing stokes adrenalin like lofty goals. I could feel the adrenalin drip set in as I prepped the bike. That's okay, I would need it along with the morning's jolt of caffeine to grind out the arduous initial five mile climb. As with childbirth (I am told) our minds are built to not to remember pain and torture. I couldn't recall how much grueling hike-a-bike awaited.
Why the fuck did I have to say under four hours? That course doesn't exactly lend itself to PR's. Doubt, my friends, can creep through the tiniest cracks in resolve. Still, I hedged, anything beyond the Wendy's will be a "PR."
The nemesis imp on my shoulder laughs in my ear.
I stowed the SPOT (GPS rescue beacon) in my pack, then straddled the aptly named Canondale Bad Habit, locked out the front and rear suspensions in prep for the initial climb-grind, and started the Trail Forks app on my phone. At least I wouldn't get lost should memory fail me.
The first mile was loose and steep. I felt the fatigue of recent 8 to 10 mile hikes in my legs while waiting on a "second wind."
After about four miles the trail's incline moderated slightly, from arduous to toilsome. My mind retreated from reality into flashes of random, oft incoherent thought patterns. It's a self preservation mechanism that distracts us from pain. It can lead to loss of focus, though... Where's the fucking "spur?" Did I pass it? Maybe the spur won't be as rocky as I remember it. Don't forget to engage front and rear suspensions before heading down House Mountain.
Cows moo with mock as I crank by. Fuck you cows! You're bound for slaughter.
So are you, one moos back. 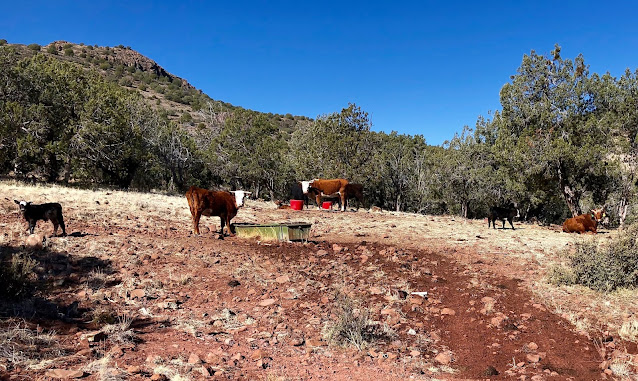 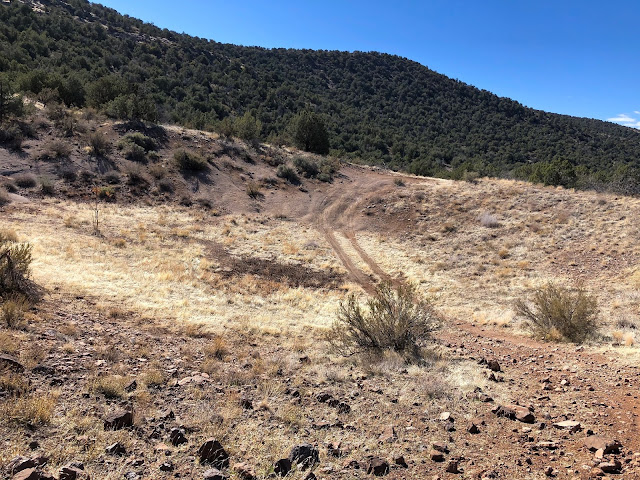 I'd be lying if I said I wasn't in "over my head," multiple times in fact. I was reminded of T. S. Eliot, who said something like: You never know how tall you are till you're in over your head.
I crested the apex of my ride drenched in a monsoonal sweat. Cranking through nonstop rocks were so brutal they took a toll on my forearms and back. I stopped to stretch tightening back and hamstring muscles before staring down a precipitous 4 X 4 road. It was laced with loose rock and boulders and looked impossible.
I should hike-a-bike this I thought. But the app ticks, so I feathered brakes as best I could...lighter on front while mostly locking up the back to serve as an anchor/rudder of sorts...all the while steering around the most "explosive" IED cobble I've ever ridden, excepting the last time I was here, of course.


Getting down House Mountain was an exercise in ill-managed chaos. I was winded and perspiring from fighting gravity and trying to make the bike go where I needed it to go. There were stretches where soil was absent, long washed away, leaving only rocks and roots to navigate.
I'm told that bad things get better. Not necessarily to an end, mind you, just "better." It's meant to bolster sagging spirits, but I find it really doesn't help when one is drowning in badness. 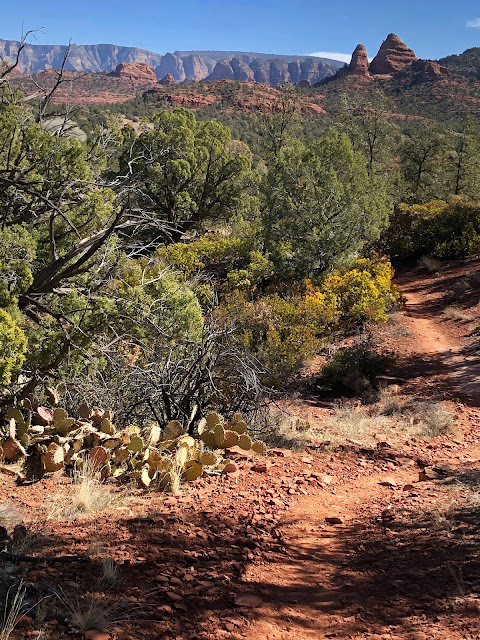 I think I plied every possible platitude getting to get down House Mountain to the friendly confines of Turkey Trail. In the end, I learned that struggle is more mental than physical, while success is more physical then mental...if that makes any sense.

Turkey Trail eventually spit me out on Verde Valley School Road. Exhausted, I made a mostly low gear grind up to a crest. From there it was a long gentle downhill glide into VOC. At that point, I knew I was going to make it past Wendy's. A PR was in my future. From Wendy's I had a mostly level to rolling 6 miles followed by a final 2 mile climb back up to camp. I almost stopped for a frosty at Wendy's but decided to pass fearing if I got off my bike I might not get back on. Glancing at my Trail Forks app, I noticed I had a shot, depending on the coming hill climb, at making it back to camp in under four hours. I popped two caffeinated  Shot Bloks and cranked on.
The climb back to camp on a paved busy road was almost as scary as the rest of the ride. Much of the time I was pinned between a guardrail and traffic with no room for mistakes. Everyone, especially big trucks, was in such a fucking hurry. Few gave me any room as they zoomed by. I felt at greater risk of getting killed on the last 2 mile stretch than anywhere else on my ride, dangerous as it was.
In riding the loop, I saw no one till I was nearly at Verde Valley Road. If you want to know what your made of, take on something a little beyond what you think is your grasp, and do it alone. Think of it as "forced introspection," cause sometimes when you find yourself alone in the middle of nowhere, you might just find yourself.
My time ended up being 4 hours and 5 seconds. Close enough.
Peace out,
mark
Posted by Box Canyon Blog.com at 1:34 PM