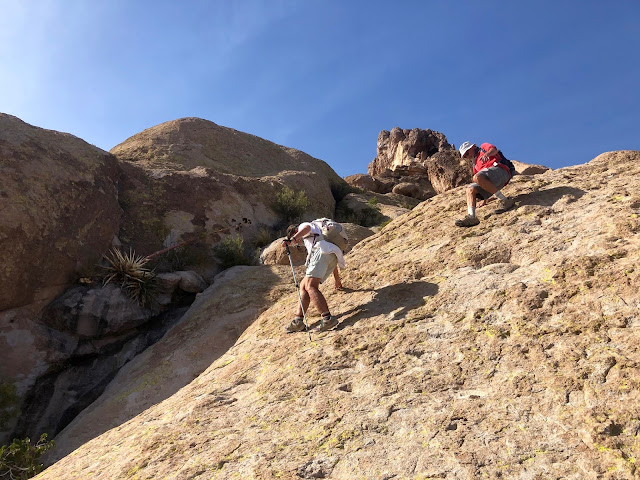 "When you stay too long in one place, you forget just how big an expanse the world is. You get no sense of the vastness...just as it is hard to have a sense of the vastness inside any one person. But once you sense that vastness, once something reveals it, hope emerges...and it clings to you as stubbornly as lichen clings to rock."  Matt Haig, "The Midnight Library"

Good Morning. Mark and Bobbie here hanging out in Lovely Ouray, awaiting our turn for the first COVID inoculation. While the underground rumor mill runs rampant with misinformation and slight-of-hand hijinks regarding the when and whereabouts of getting our vaccine shots, we watch a city crew on their 8th day of attempting to thaw out our frozen water service line. Oh it's good to be home in the cold and snow.

On the bright side, we were blessed with a work-around fix when the crew connected a lengthy garden hose from a neighborhood fire hydrant to an outdoor hose bib on our house. On the dark side, however, the water tastes and smells like rubber, and we must leave faucets cracked open to keep the hose from freezing.

The crew, using a powerful truck mounted welder, finally gave trying to thaw our copper service line yesterday. The distance was just to great to pass sufficient current to warm the pipe. So we and our neighbors are stuck with the work-around till at best, late March when the frost line gives way, or at worst, mid April, depending on the weather. The part that makes no sense at all to us, is that this happened during one of the warmest and driest winters on record. Oh well.
Our plan is to stick it out here until we can get the first of two vaccine shots. After that we hope to resume Arizona Adventures for three or four weeks, at which time we'll dart back home for the second booster shot...which will have us resetting a chilly February Boondock Camp somewhere in eastern Utah and sticking it out till the warmer weather hits the high red desert and slick rock. I guess I'll have to assume the life of a mostly frozen bachelor, as Bobbie commutes back and forth from Lovely Ouray every other weekend or so, depending on weather. Might be time to break down and buy some long pants :(.
Now for a couple final adventurous Arid-zona climbs before switching to winter and snow here at home. I guess the idiom is true: all good things must come to an end.
And after souper gonnen they to ryse,
At ese wel, with hertes fresshe and glade,
To lyken hir, or that hir laughen made.
He song; she pleyde; he tolde tale of Wade.
But at the laste, as every thing hath ende,
She took hir leve, and nedes wolde wende.
Chaucer, Troilus and Criseyde, middle 1300's AD
Pursuant to a lifetime of reaching beyond one's grasp, there comes a time and age when when a man is moved to simplify gratuitous wants to basic needs. Be it attitudes that change times or times that change attitudes, things once considered a source of embarrassment slowly morph into I don't give a shit anymore how I look or smell. I'll wear my holey underwear as long as I want to, damn it, And my single pair of greasy, blood-stained biking shorts and faded red jersey.
Ah yes, what a relief it is to drop pious pretensions and wear ones wore out clothes like badges of honor. Truth be told, Bobbie and I have, and still wear, under and outer garments purchased as far back as Reagan's first term. In truth, we never have been keen on spending hard earned money on trendy wardrobes or latest gear. I think Einstein said it best:
A table, a chair, a bowl of fruit and a violin; what else does a man need to be happy?
With that in mind, after well over a month of biking and hiking and cheap-beer drinking at Camp Superstition—with nary a trip to a laundry, mind you—reality caught up with my newfound    unpretentious lifestyle at the intersection of Wilderness and Freedom.
Most of us know by now that the vaccine rollout has been bumpy ("sir-prise, sir-prise"). We expected this, which is why Bobbie, thinking she had several weeks before being called in for her inoculation, returned to join me in Arid-zona in mid January.
A few hikes and bike rides and a case of Nature Ice Beer later (hey, 30 cans per case @ $16.95), she gets the call from Ouray County Health to come get her shot! Problem was, they wanted her there the next day.
Neither of us felt up for an all night drive through winter weather in order to make that appointment. Bobbie got pushed to the end of the line in Cat. 1-b, just as a shortage of vaccines reared its ugly head (drum fingers here). Well, into good lives a little rain must fall, right? It could be worse, we repeat, trying to stay positive. And, in case you are not fluent in the above Ye Olde English, here is Bucchianeri's interpretation of Chaucer's coining of the idiom "all good things must come to an end."
The most beautiful moments always seemed to accelerate and slip beyond one’s grasp just when you want to hold onto them for as long as possible. ― E.A. Bucchianeri, Brushstrokes of a Gadfly
A few days later we decided to come home and wait for the phone to ring from County Health. It hasn't.
So it's snowing and blowing, our water is frozen, and Lazy Daisy is stored in sketchy storage lot in Apache Junction. Now that we're here, the vaccine is not. And nobody in charge knows anything...
**************************************************** 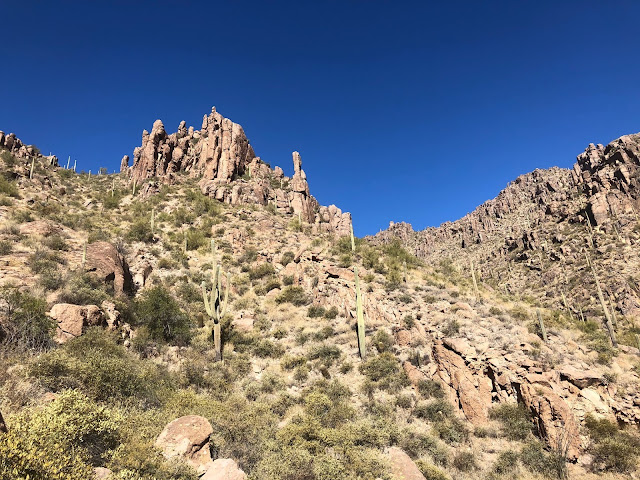 Before rushing home the three Rv amigos, Chris, Bobbie, and your's truly, squeezed in a couple of ambitious (given our septuagenarian afflictions and my fear of rattlesnakes) climb to Superstition Peak...or at least get to a point where we can see the damn thing. Our approach was a little used "backdoor" route that we hoped would separate us from the Phoenician peak-bagging masses that suddenly want leave suburbia and commune with Nature.
And now for an understatement: It was steep as a Teton peak, loose as sidewalk pooping goose, and hot as a hypocrite in Hell. 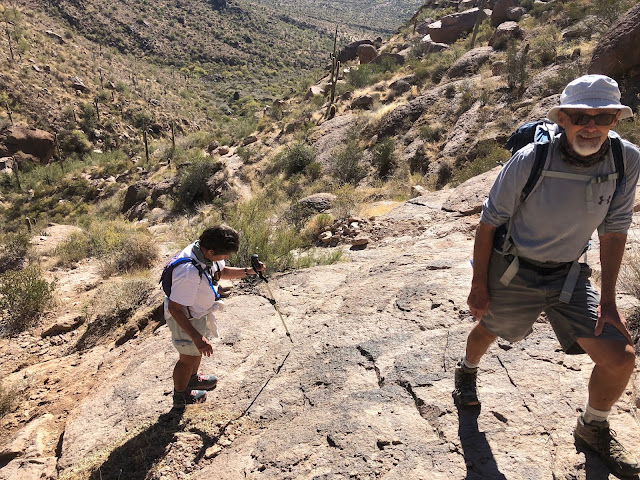 At least there was a trail...sort of, anyway...which we promptly lost track of. Thus, our mission disintegrated into an every man for himself thing Way-out-front Chris went one way, middle of the pack Bobbie another, and me, I was waste deep in thorn bushes and cacti, waiting for a venomous injection that would put me out of your misery.
The "real trail" finally found us. It zigged and zagged and climbed in such a wretched way as it snaked around incestuous pod-families of monolith monsters. Talk about "phallus symbols!" 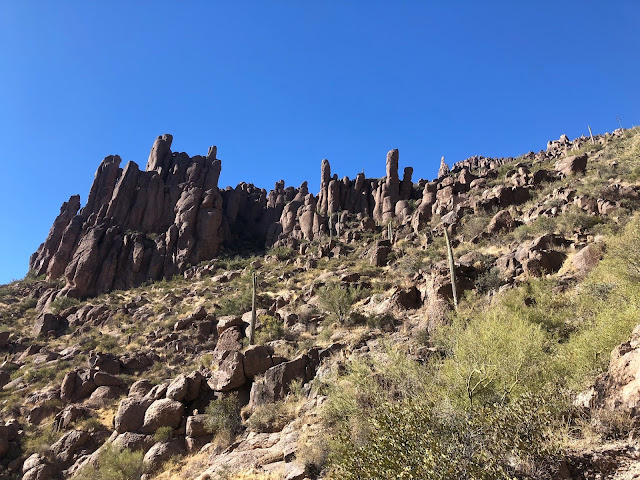 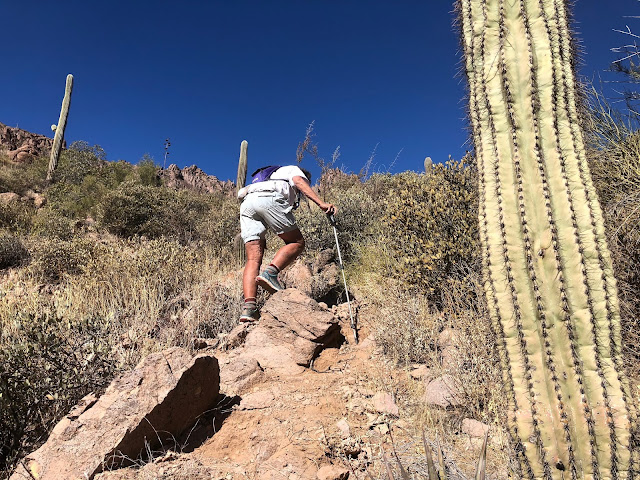 After much struggle, blood, and cursing, we cried with joy at cresting a saddle. But it was a "false saddle," which means the real saddle loomed another thousand feet higher and quite distant. 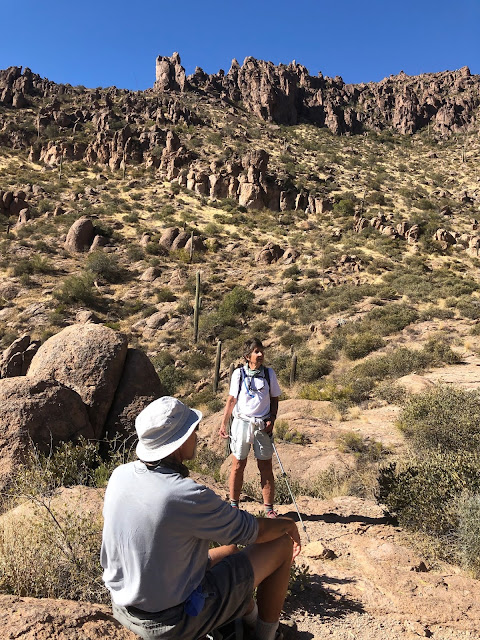 There was talk about calling it good enough on the false saddle. After all, we had got in a good workout, and the views of giant monoliths were nothing short of mind blowing, if not a tad arousing. 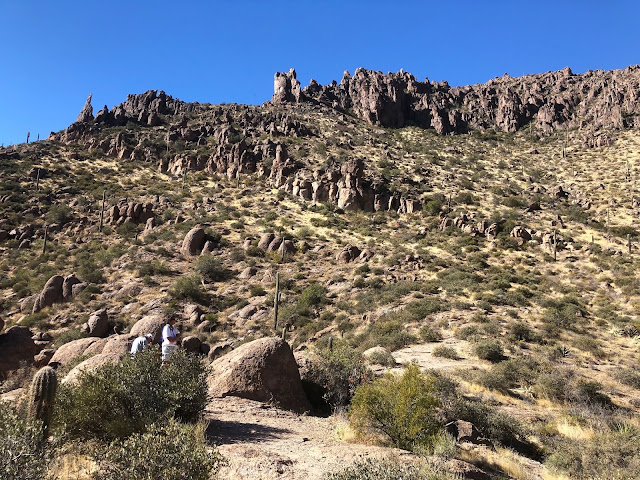 But, you know...we got to wondering what we could see from the next saddle, if it might be better. You won't know if you don't go, said some jerk. Off we go. Hi Ho. 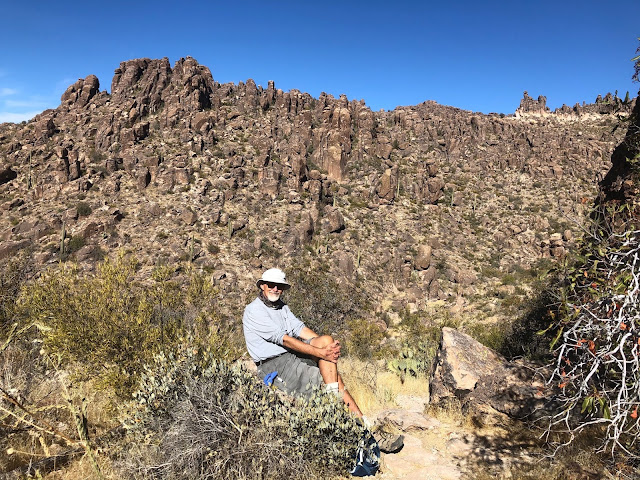 The real saddle was similar to the false saddle, except we could see Superstition Peak...way off in the distance and another 2000 feet higher...enough to quell our Geezer delusions of grandeur. 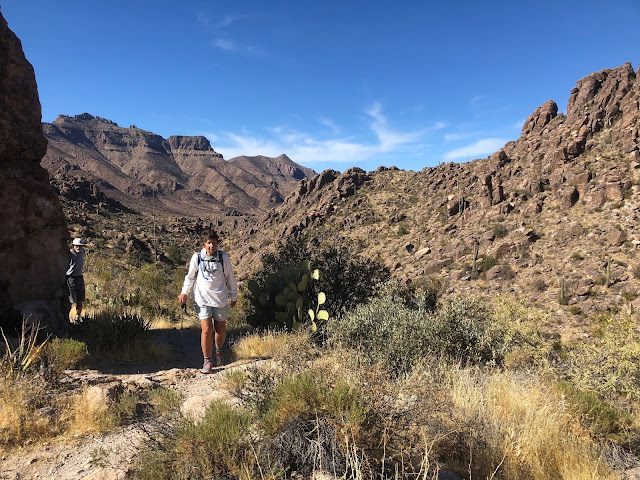 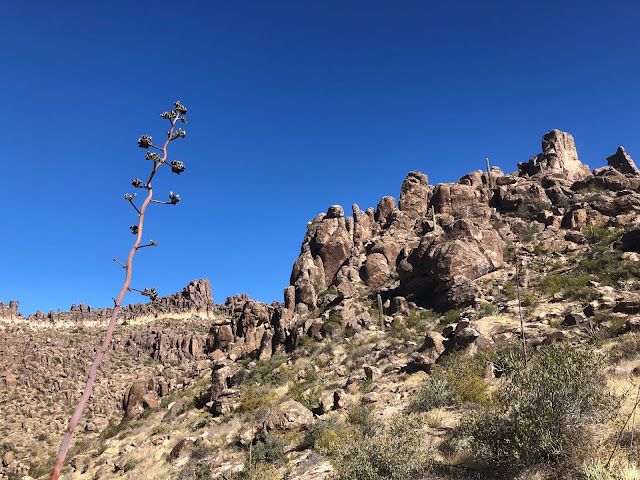 Time to head down... 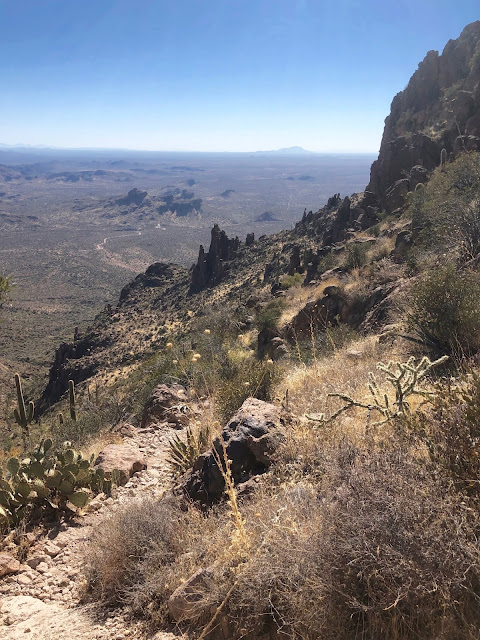 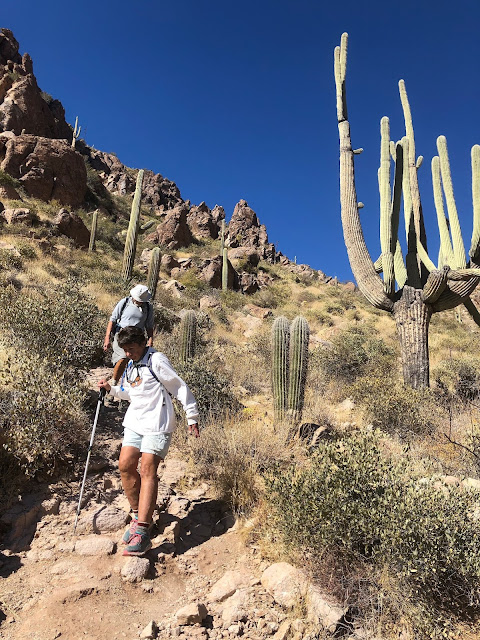 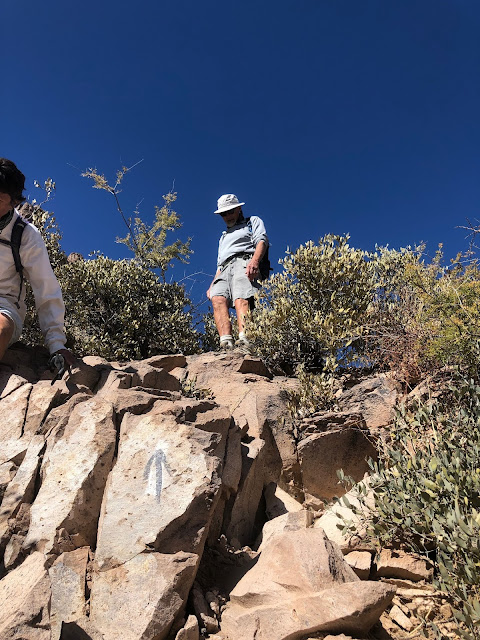 Our second climb was to attempt to make a loop hike out of the Weaver's Needle out and back. We had similar misfortunes in that there was blood and frequent brain farts where we got off trail, which usually results in more blood. It was difficult to distinguish the real trail from animal trails and/or social trails where other hikers got off track. Even with Gaia, it was more trial and error than skill. One thing for sure, though, we had the second half to ourselves. We really shoulda got an earlier start. 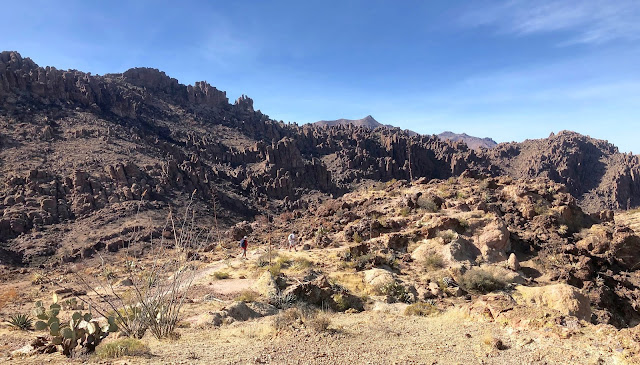 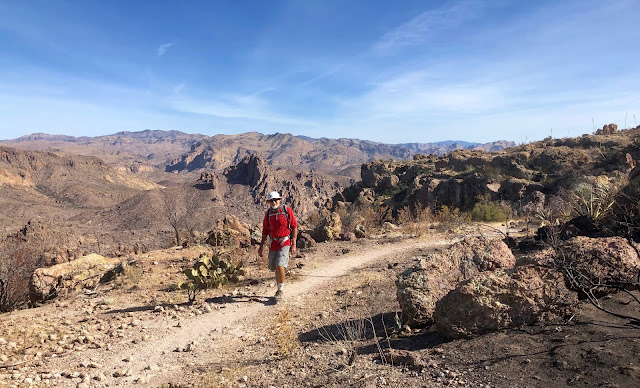 It took a while but we (Chris) finally found the "loop" return route back to the trailhead. Again, lots of burned areas from last year's fire season. 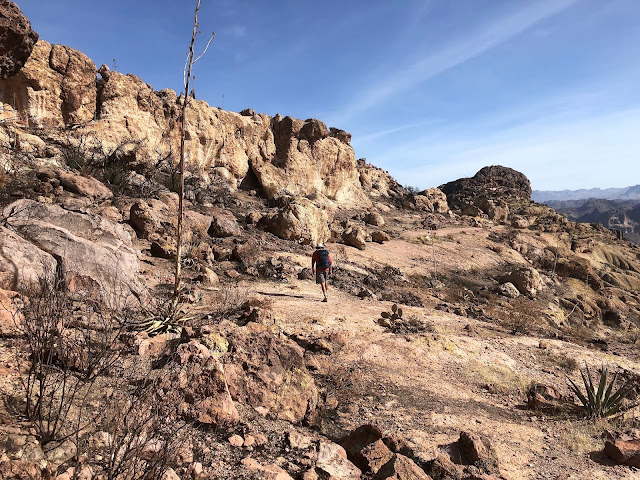 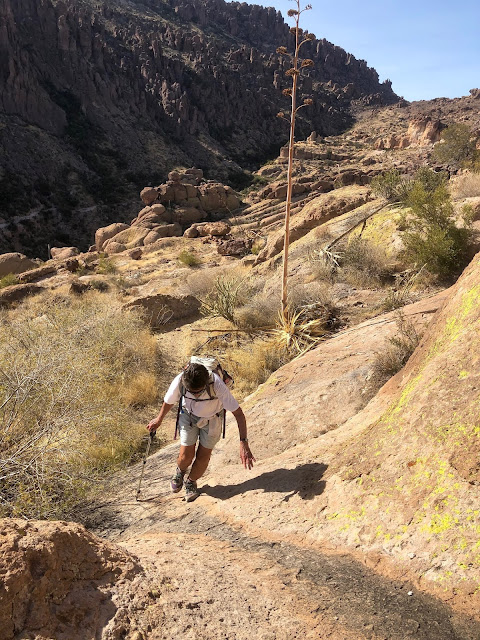 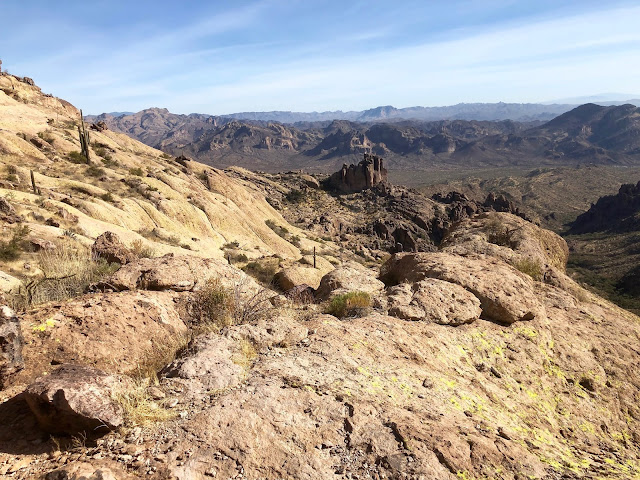 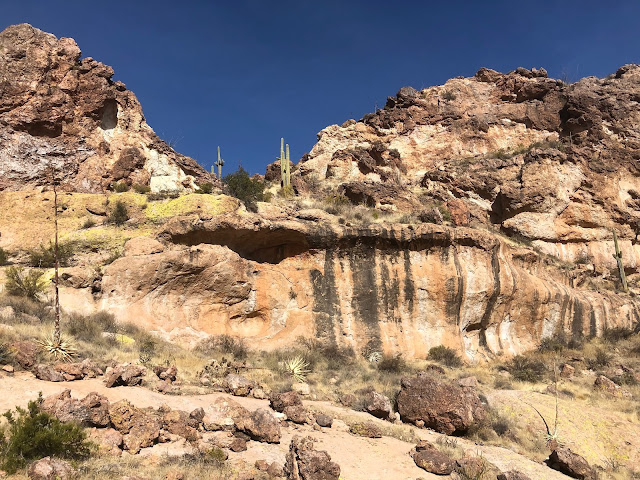 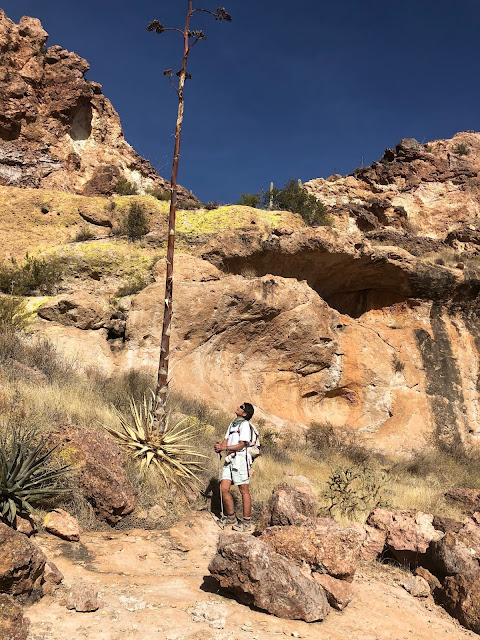 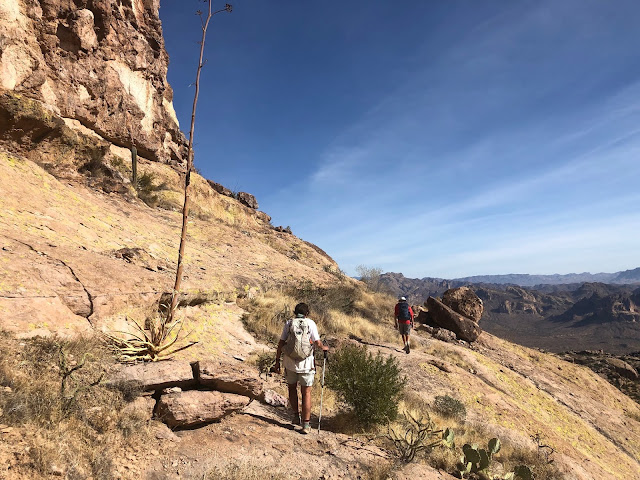 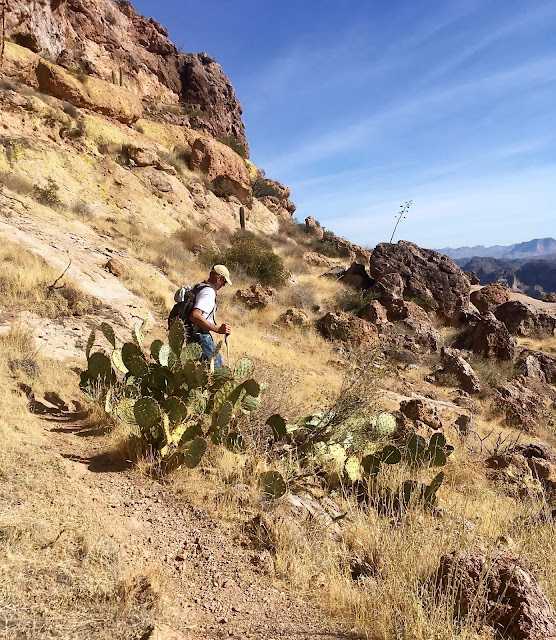 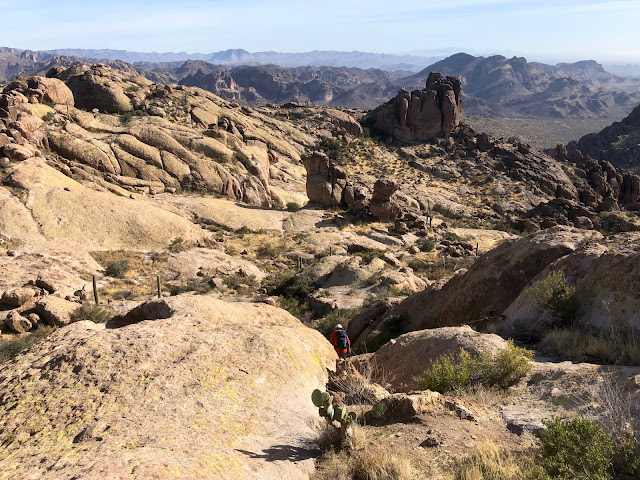 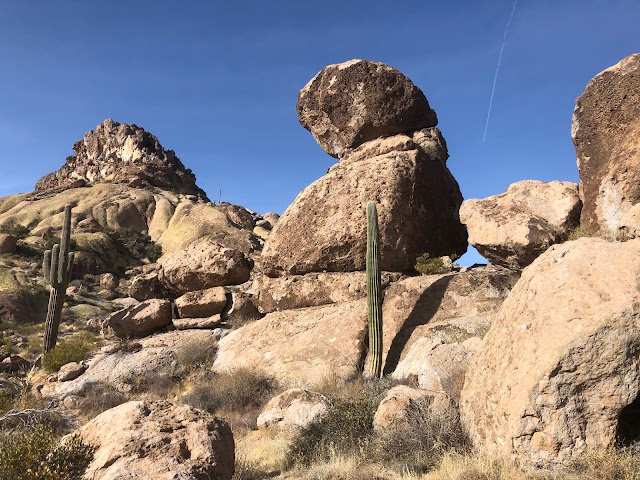 Long story shorter, there we're definite times when we had doubts about getting back down to the trailhead before dark. Obviously we made it...with an hour to spare :).

I set out to plow a foot of snow off the driveway this morning. Man, it was quite a shock to my system. Had to go back and put a pair of long johns on under my shorts. It really pissed me off. what good is a nice tan if you can't show it off? Something else that pisses me off is tomorrows forecast. Guess I'll be out plowing and shoveling some more of the white plague tomorrow. I think it's time to invest in a pair of those long flannel lined jeans. I just don't like anything touching my legs, especially something that restricts movement. Maybe flannel would be ok.

mark and bobbie, whose out wading through fresh powder up a mountain while I thaw out.

News Flash! Just as I was about to post, Bobbie plugged into the "underground rumor mill" and discovered a new source for our vaccine shots! We have appointments today at 11:00 AM. Cross your fingers, might just be heading back to a now rain-soaked Arid-zona. :)

Posted by Box Canyon Blog.com at 7:30 AM