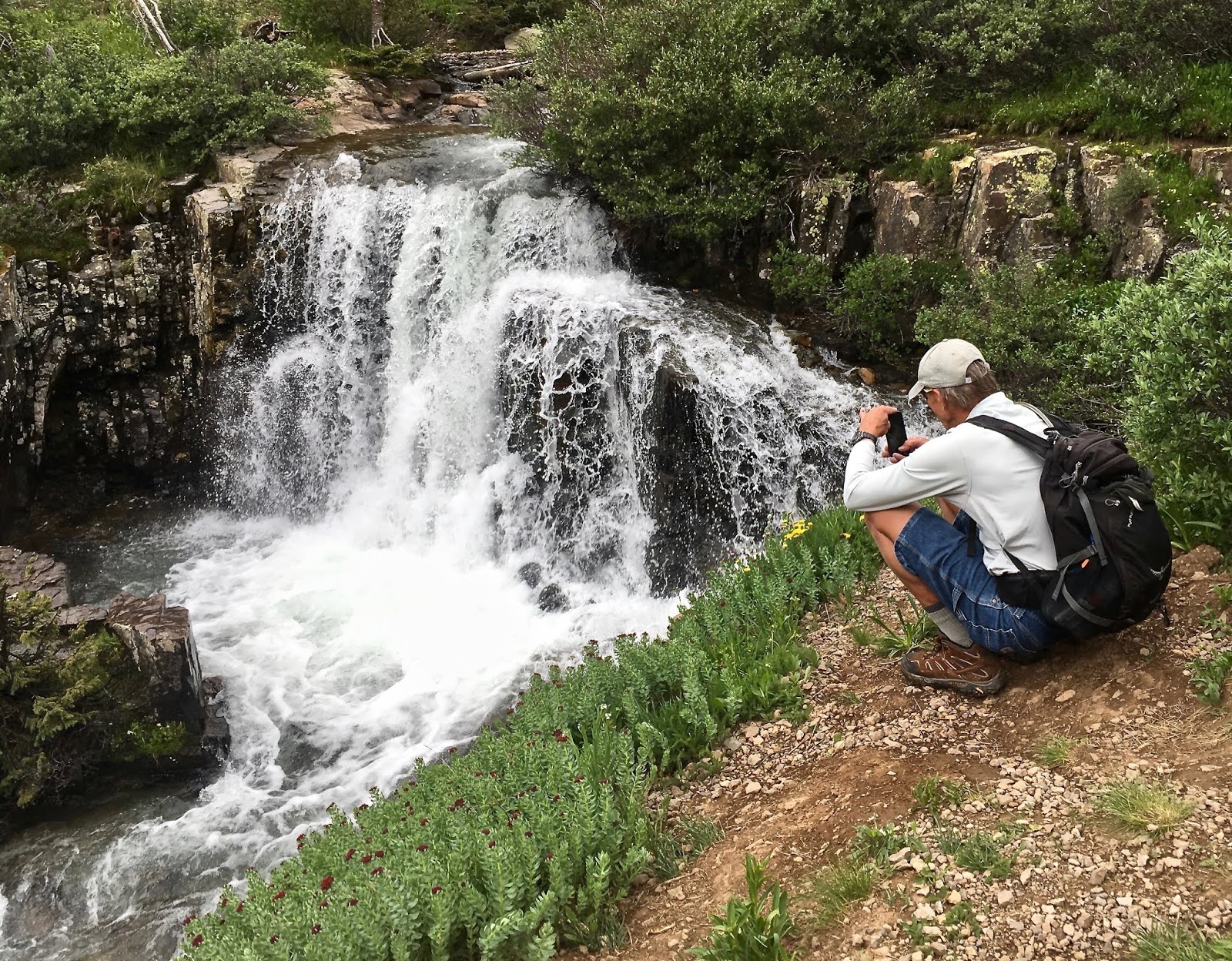 Lightning is such a random thing, as unpredictable as life itself. It's one of few things that does not play by the "rules," and harbors no respect for the brave or fool or both.

Dawn in Lovely Ouray broke under a cloudless dome of blue. "Weather Guessers" said to expect thunderstorms to roll in mid-afternoonish. We assumed that would leave plenty of time for a hike from Yankee Boy Basin up to Blue Lakes Pass.
Assume:  Ass/u/me

Due to a cluster-fuck of Jeepers and ATVs, we ended up parking a mile or so below Yankee Boy's yet-to-bloom basin. It's almost as fast to hike rocky, rutted roads as it is to get in line to 4-wheel up it, anyway. Besides, parking lower would extend our hike by a couple miles.

As you can see below, nary a cloud as we strolled toward Mount Sneffles and the upper basin. The road was soon buried under snow, which kept obscenely loud ATV Motorheads from polluting our solitude. 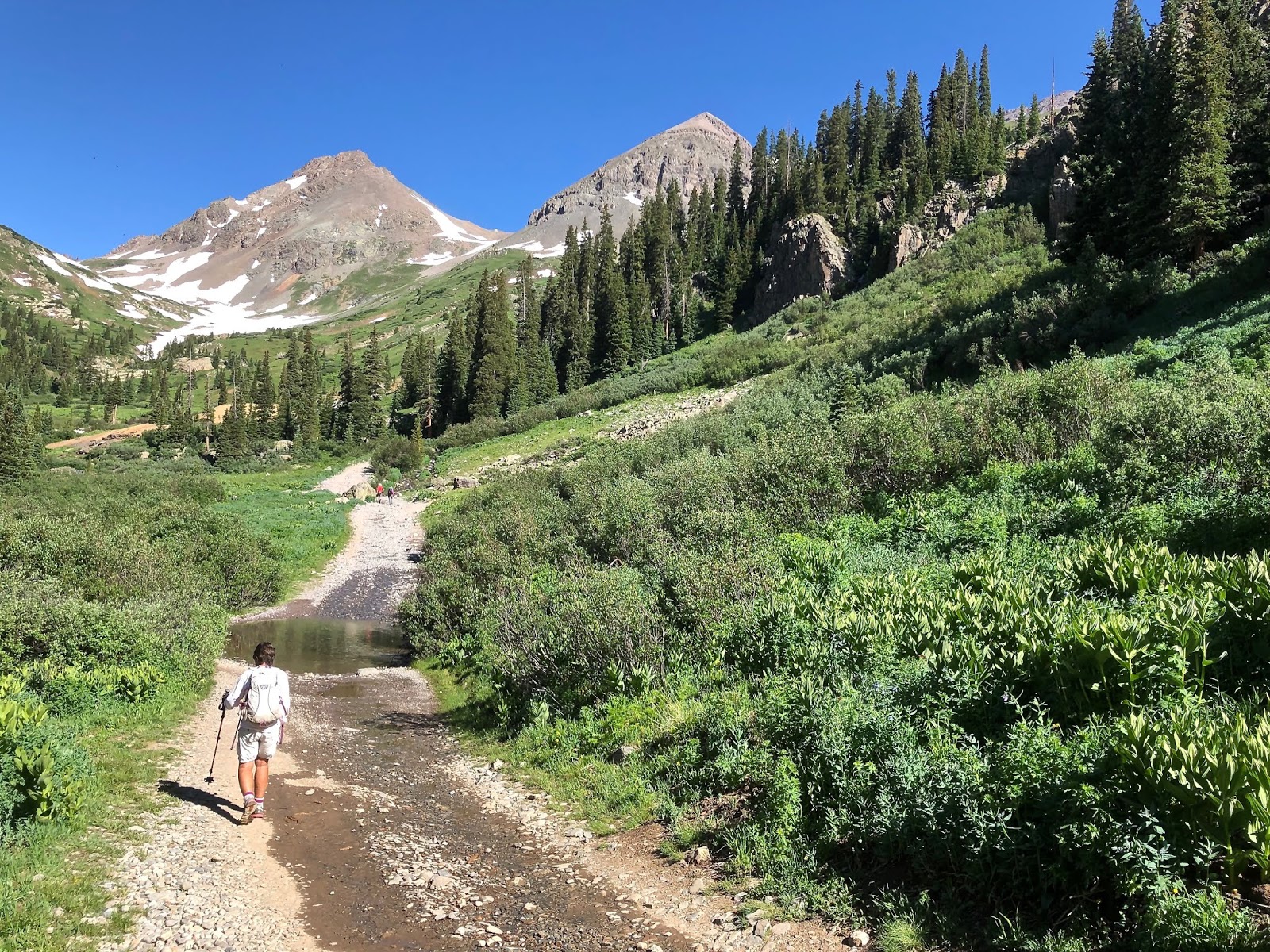 Yankee Boy was lush, but yet to flower much beyond a few bluebells and the occasional clump of columbine. 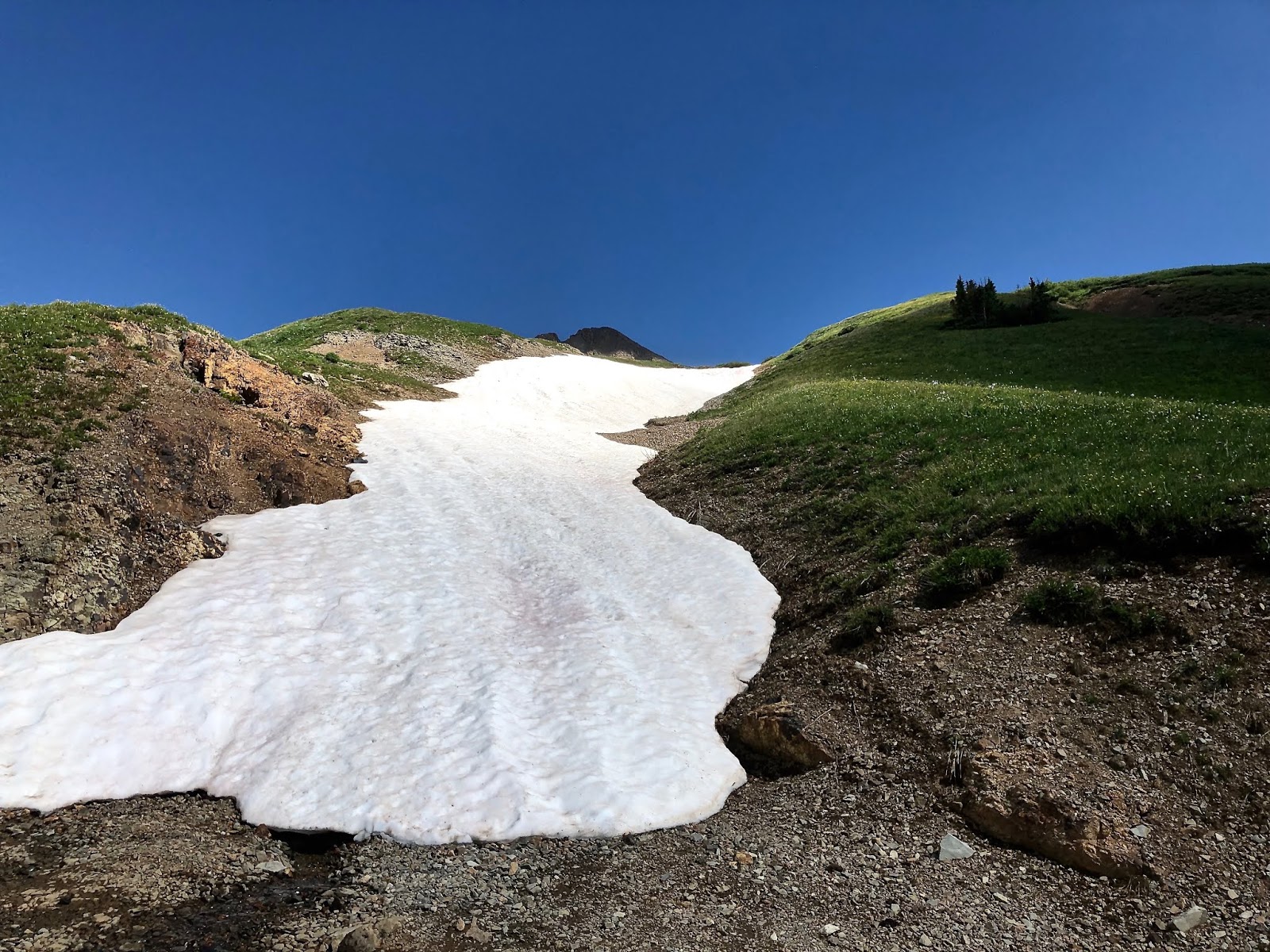 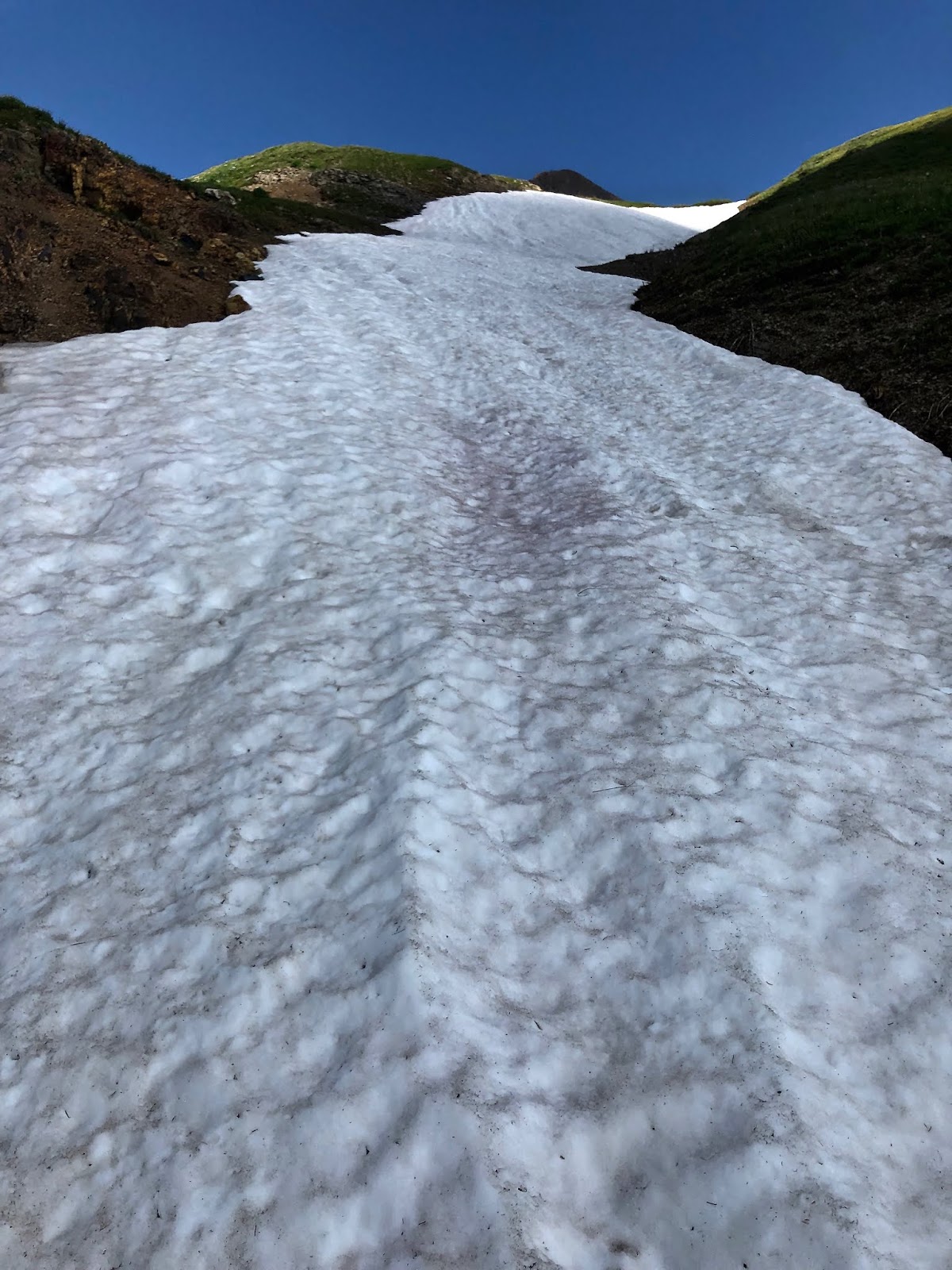 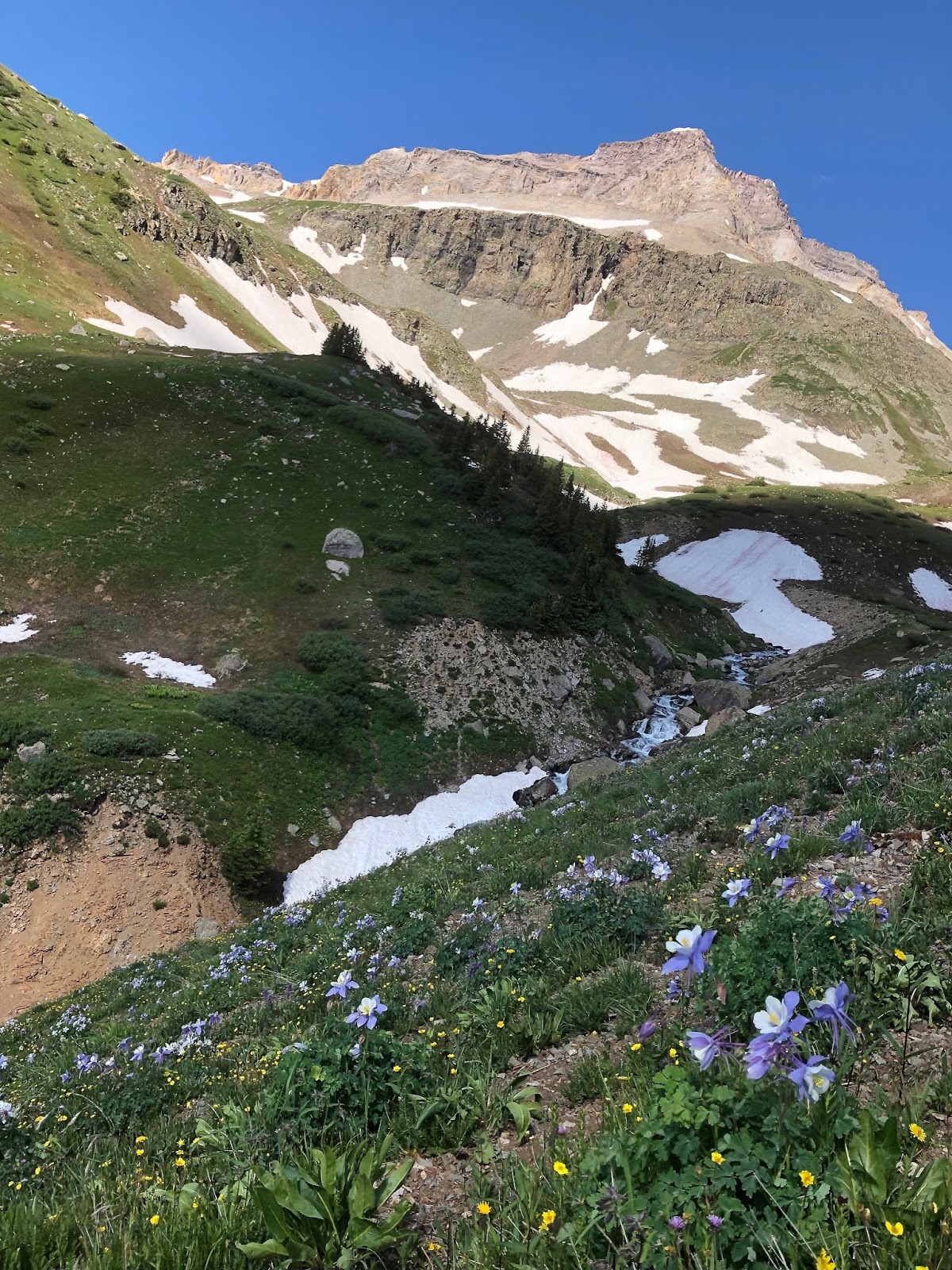 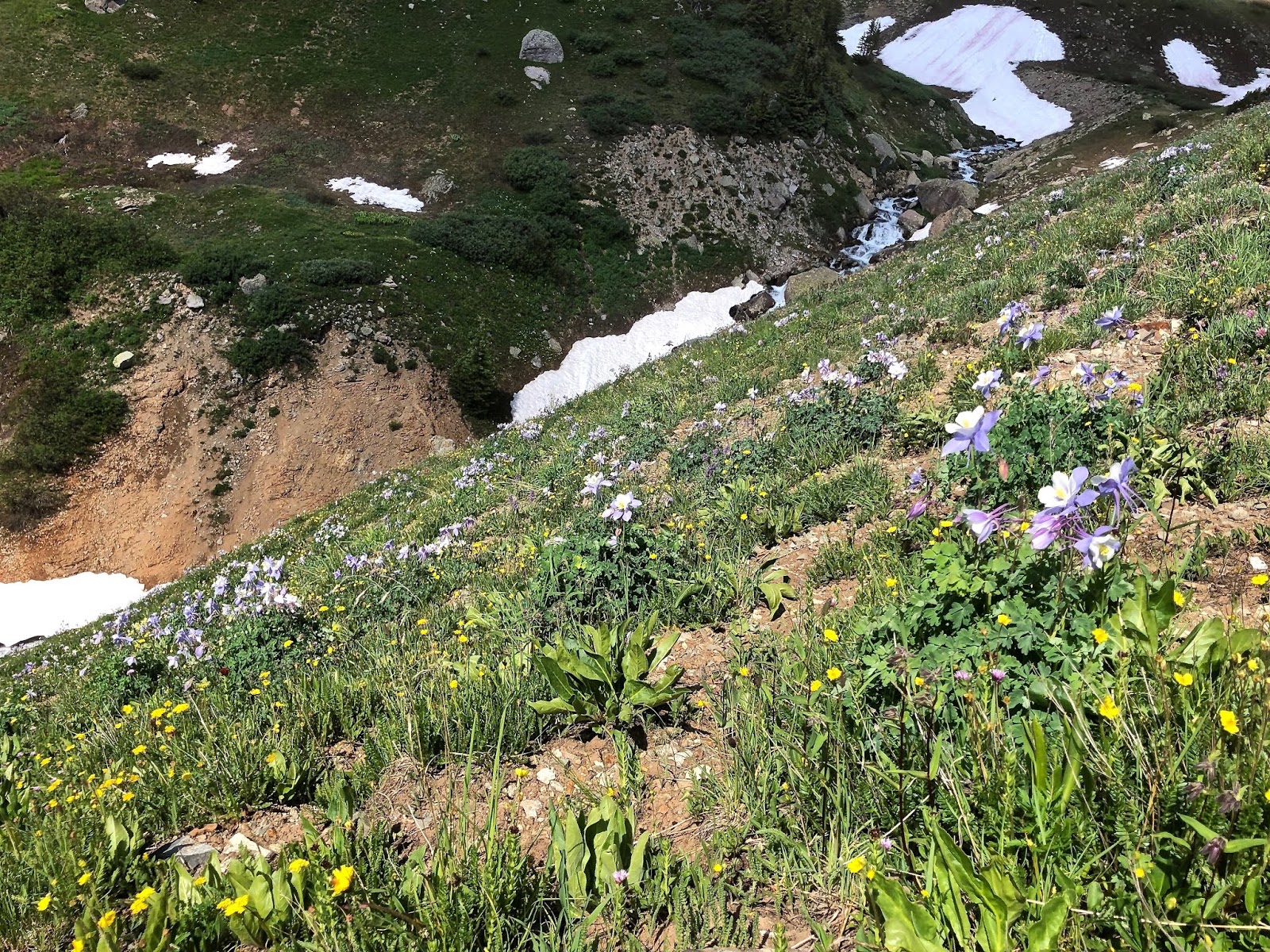 You see? Almost there and barely a cloud. 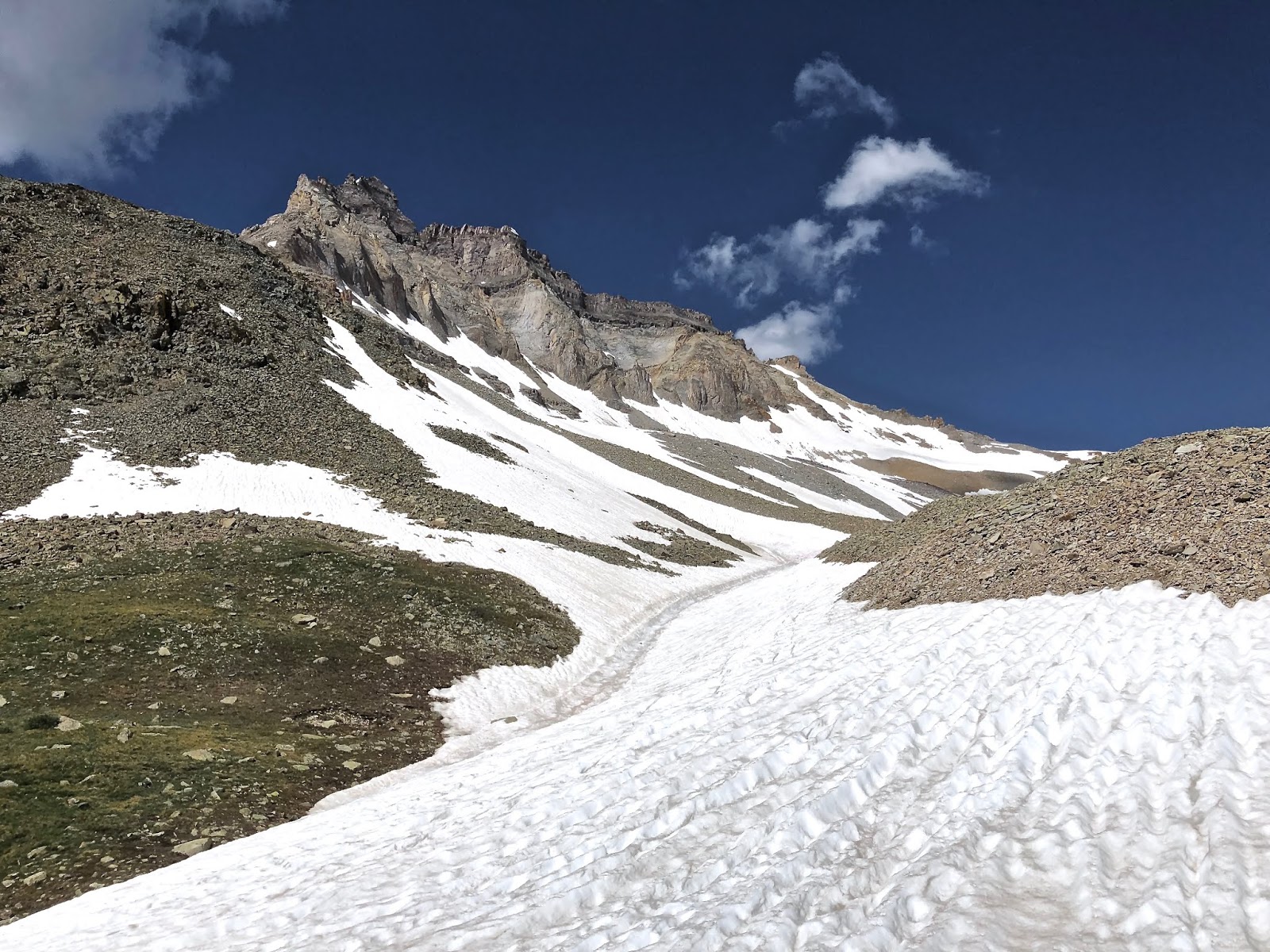 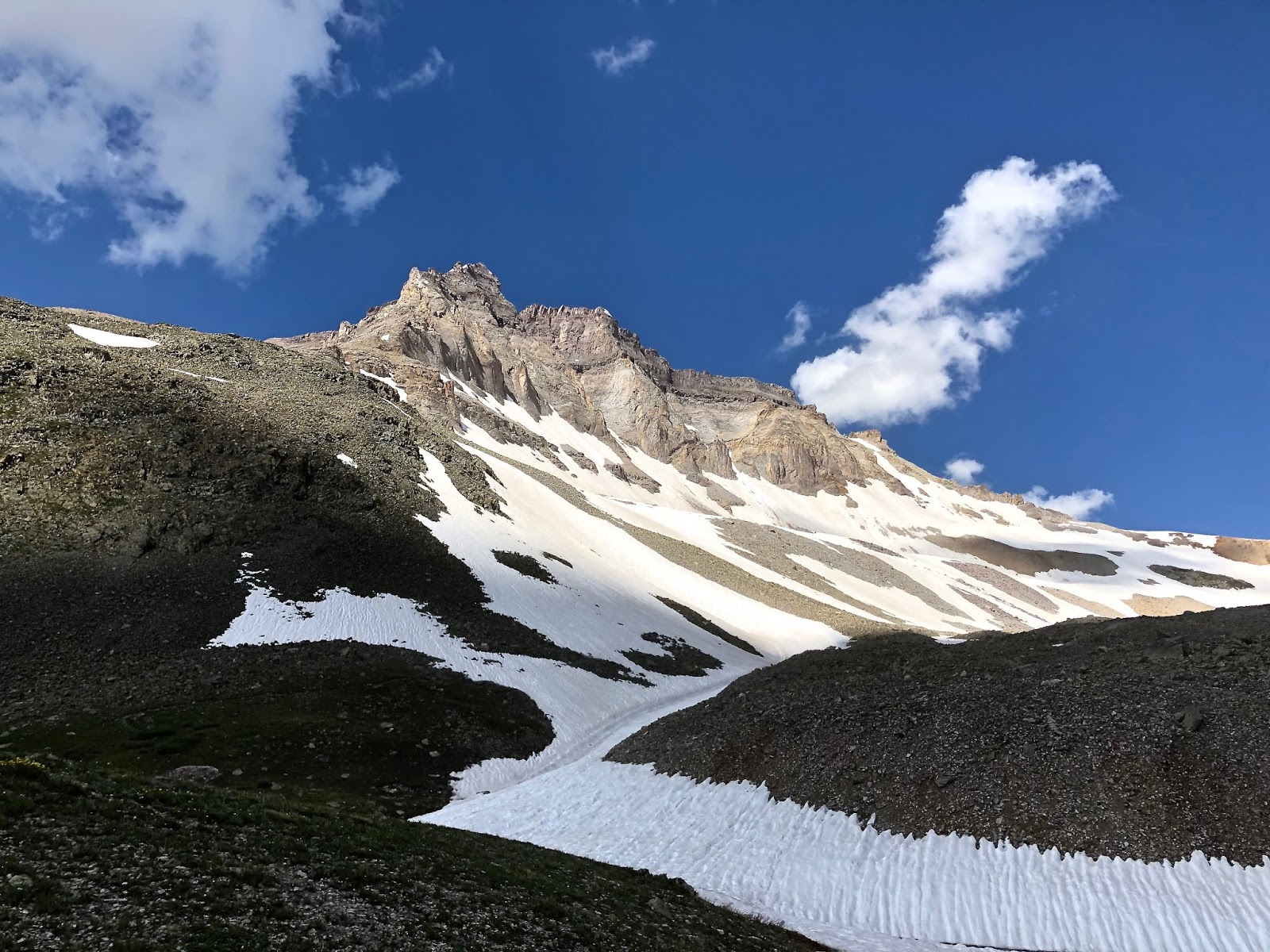 A few minutes later we turned around to have a look back down-basin. Hmmm, that was fast! 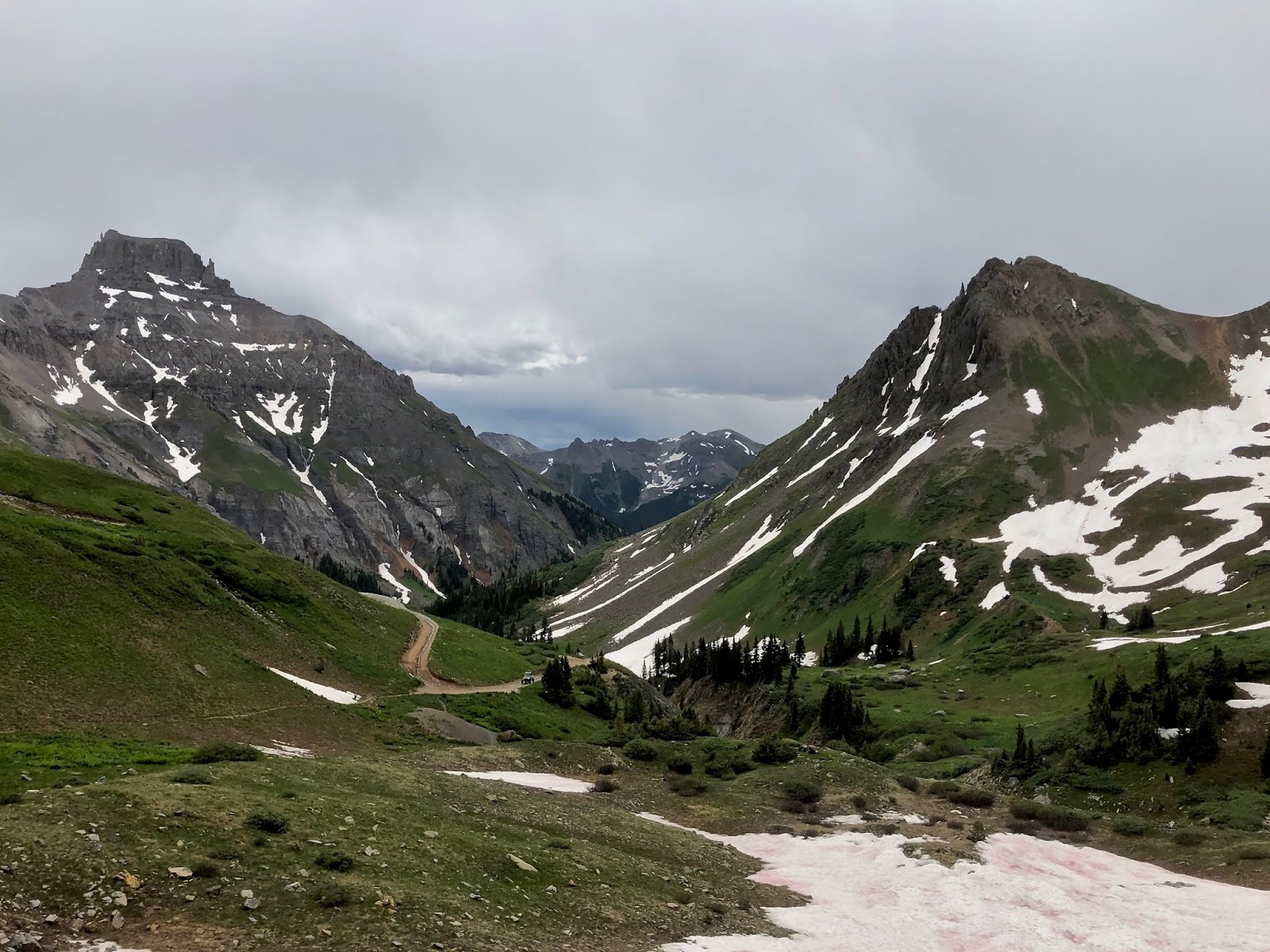 Hearing nothing in the way of thunder, we continued on...skirting the base of Mount Sneffles. We met two hikers and a dog coming off the access/escape scree of rocks and boulders—the common route for ascending our backyard 14er. One had made it to the top, the other got spooked by a sketchy snow crossing just a couple hundred yards from the summit. Good thing they got an early start, given the weather.

We told them we were headed for Blue Lakes Pass. As we parted they told us to be safe. I said, "We're still waiting for the first roll of thunder." To which they said, "Oh we've been hearing it for a while."

We clumped on through a field of Sneffles' shed boulders, crossed a snowfield, past a sign that said 1/4 mile to Blue Lakes Pass. We just might beat the building storm.

Just as we arrived at the final switchbacks up to the Blue Lakes Pass, a roll of reverberating thunder stopped us in our tracks. Time to head down... 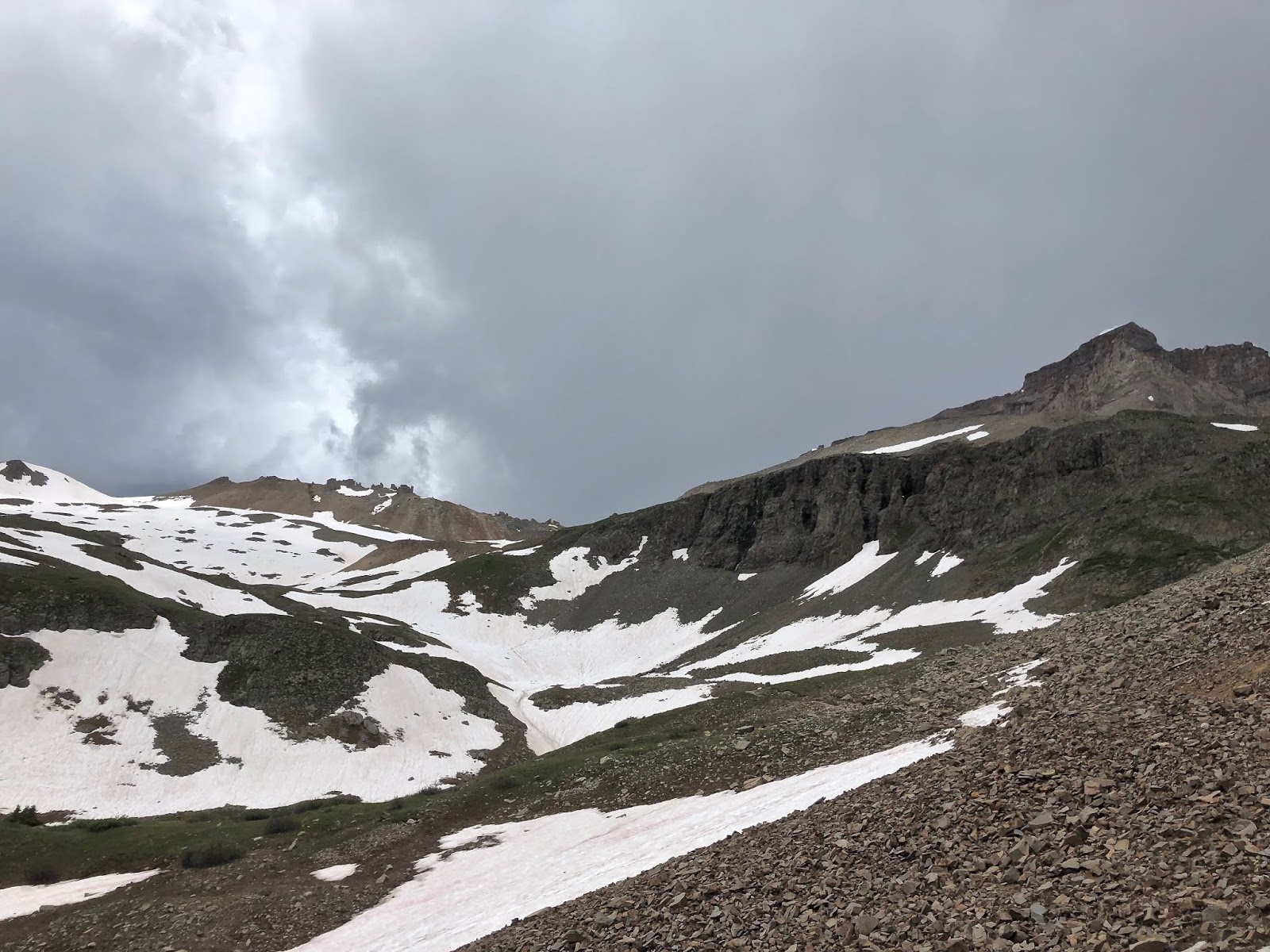 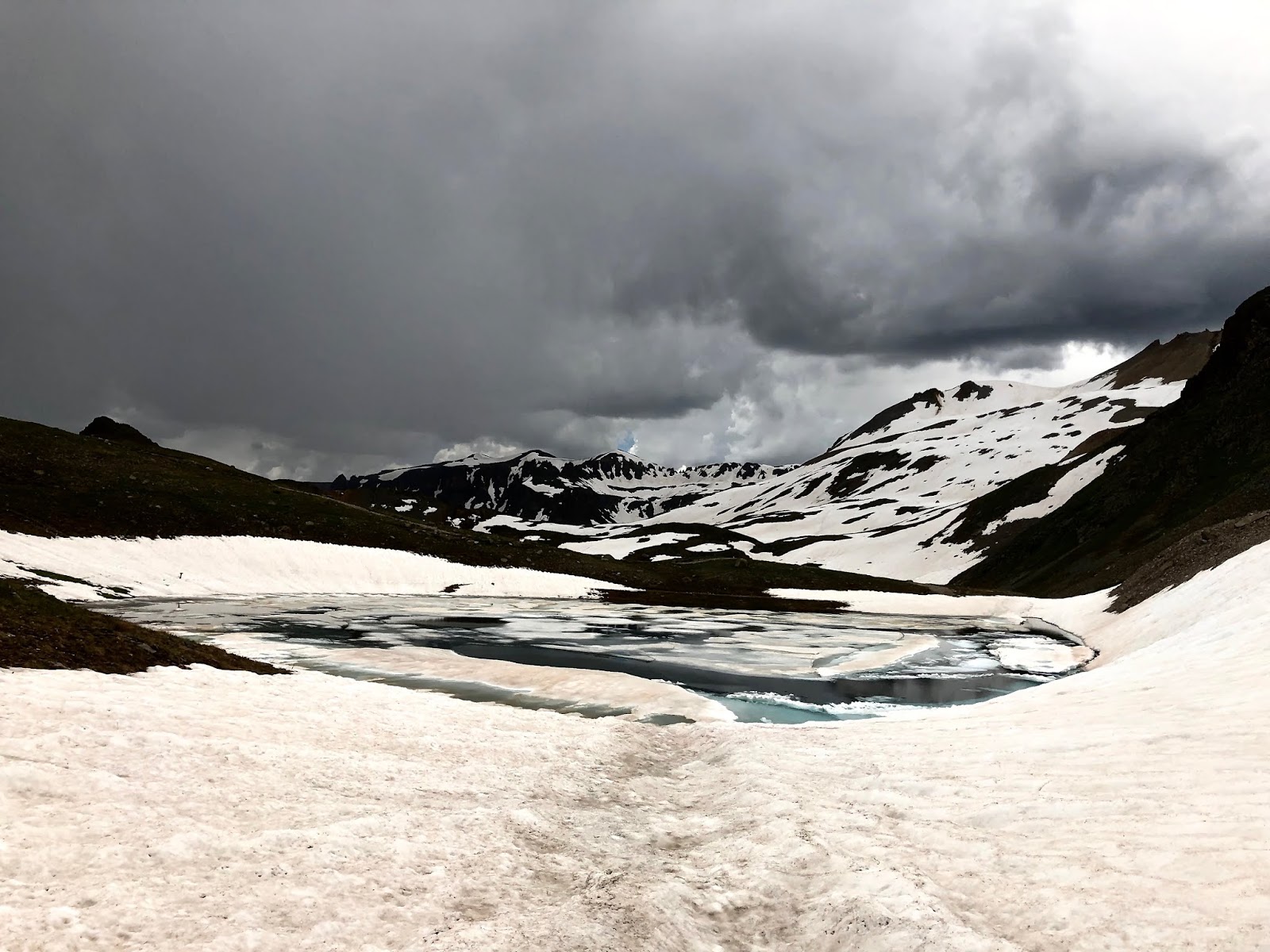 In spite of the thunder and lightning that sent us scurrying down, we met three backpackers heading up into the storm, destination: Blue Lakes. I told them how black it was behind the pass...and about thunder and exposure up there. But, they kept going.

Then we met a solo gal hiking up. She had summited Sneffles via the Blue Lakes route (lots of exposure) and was headed back up to look for a pack full of expensive gear ($1,000 bucks) that somehow slipped from her back and slid all the way down a steep couloir full of snow...out of sight. We warned her, too, but to no avail.

Continuing down, I mentioned lightnings "randomness" to Bobbie. Like, it'd be our luck to be struck playing is safe and heading down, while the crazies going on up into the black thunder-zone...one of them solo...get a lightning pass.

We fell short by about 10 minutes. Odds are we could have probably made it and lived to tell. Then again, why mess with Thor and fate? 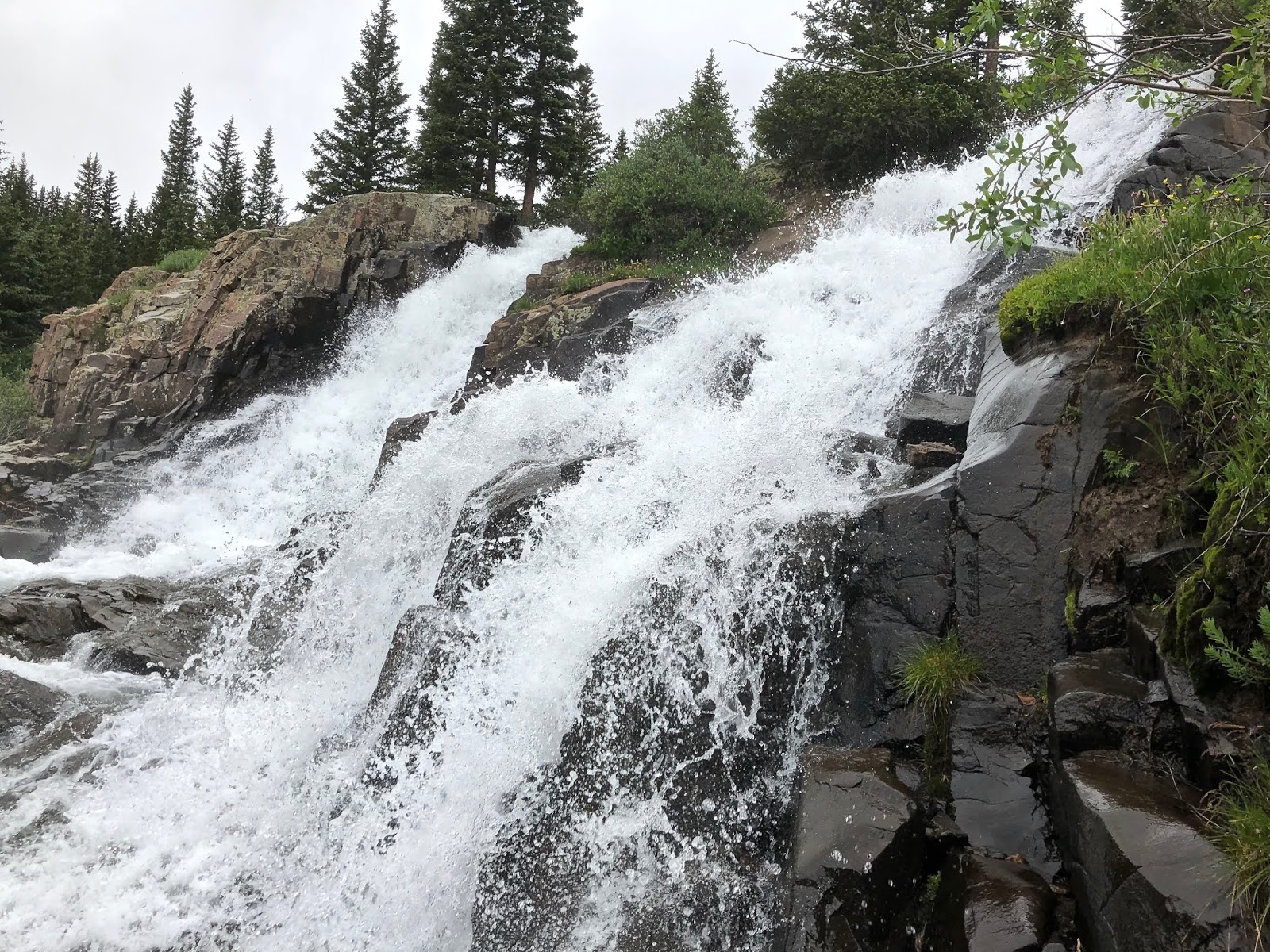 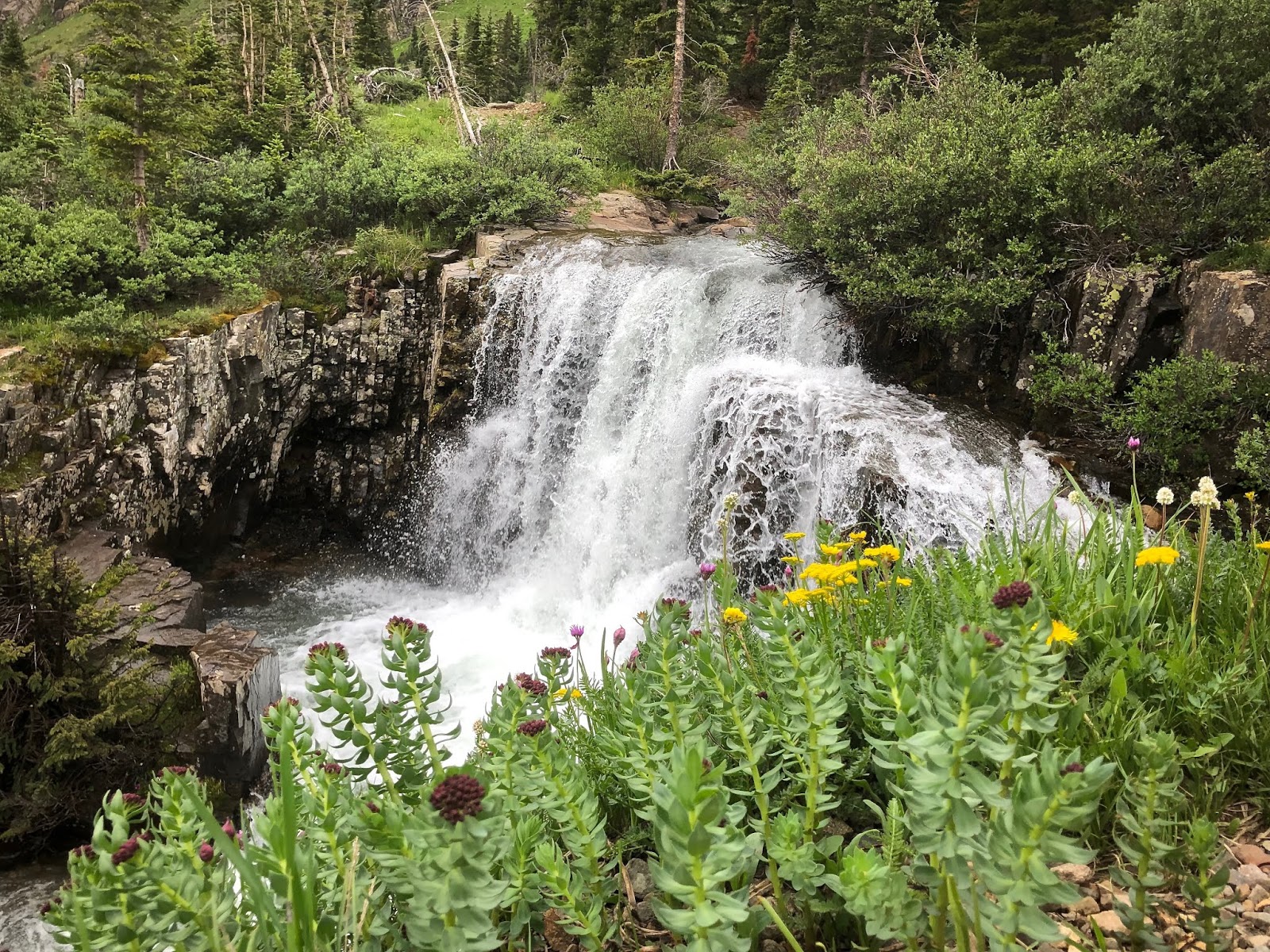 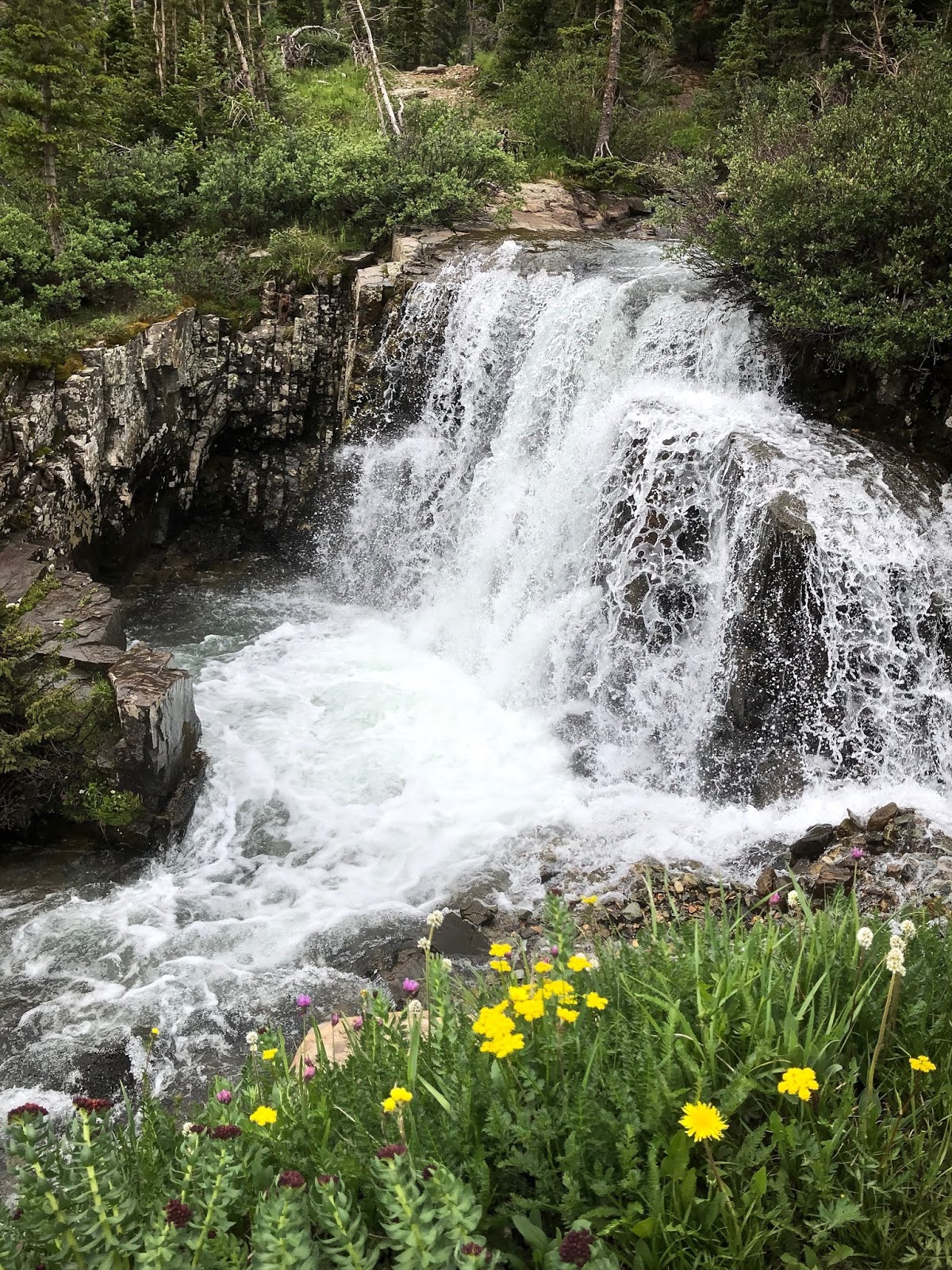 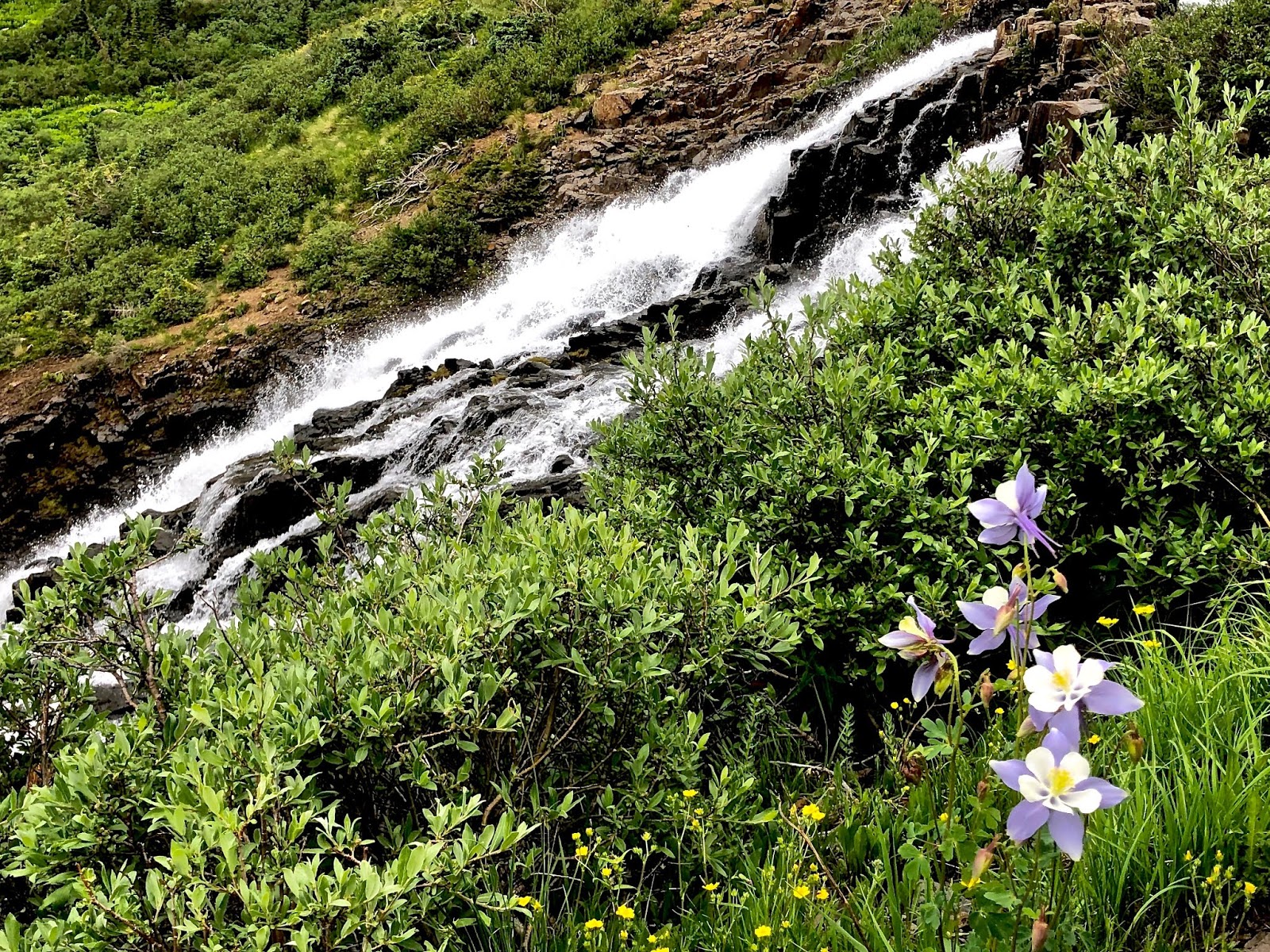 "You might get run over; you might get hit by lightning. I mean, who knows? Each day, there is a chance you might die. And there's nothing wrong with that. Every living being on Earth is facing that same existential rift."  Alex Honnold