Autumnal Interlude, in "B flat" 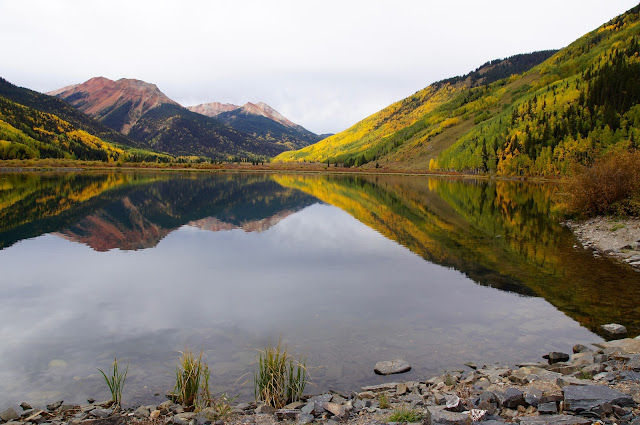 On the heels of Last Dollar Road, Whipple Mountain, and a pint of bitter at the Brown Dog in To-hell-u-ride, we moseyed up The Million Dollar Highway to have a peek at Ms Autumn's progress.


Blah clouds had moved in, along with an increasing chance of rain as the day ticked by. I had to face the grim likelihood that there would be a morose pall-like backdrop for the soft glow of Ms Autumn's brush. Crap. I almost left the DSLR at home.  In fact, I almost left myself at home rather than face the prospect of having to crop-top the white-out from every photograph.

But the thought of pouty-putzing around the house with me, myself, and I all day is a fate worse than bad skies, so I rose to the occasion and drove Ms Bobbie up to her mountains, pretending that everything was just fine and dandy. 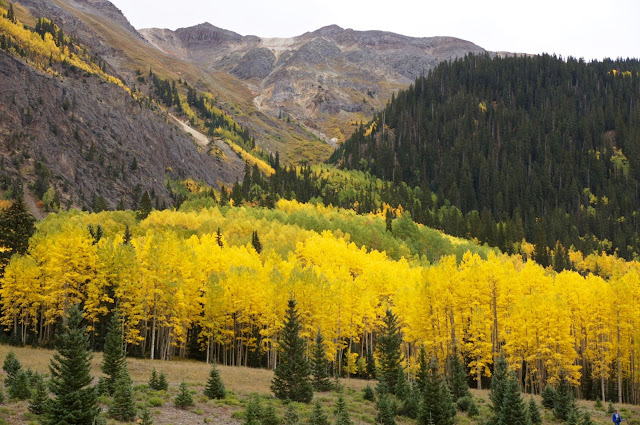 On calm Autumn days Crystal Lake is hard to beat for golden reflections. Add those Red Mountains and a blue sky backdrop and you'll walk away with a zillion photos suitable for framing. Well, two out a three is better than nothing... 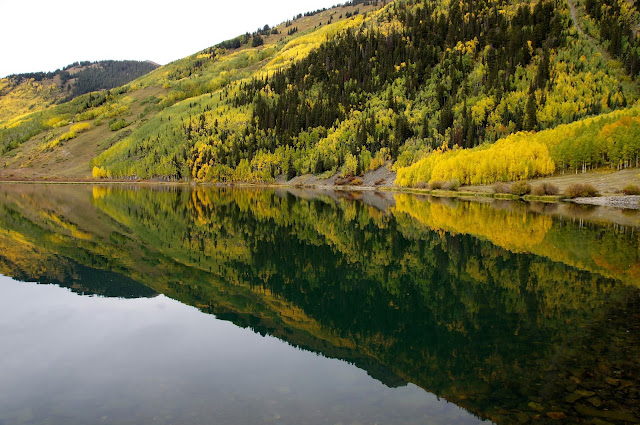 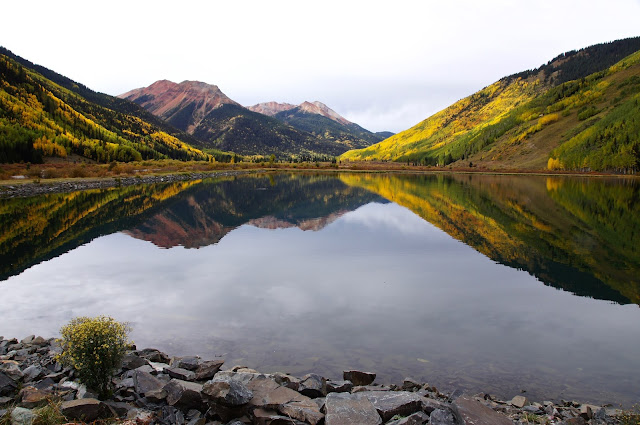 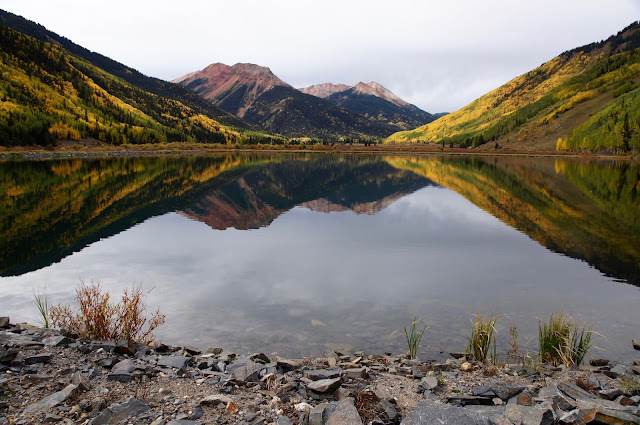 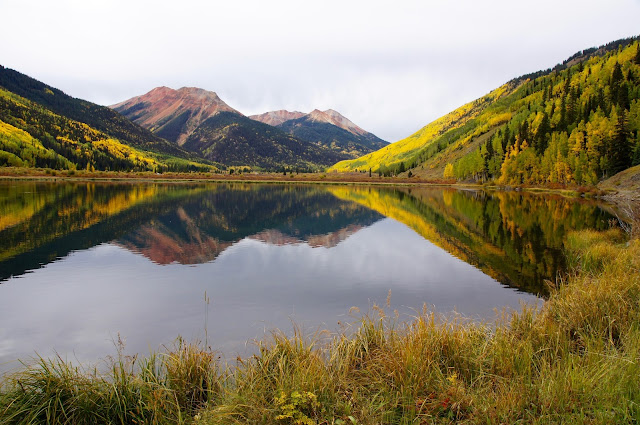 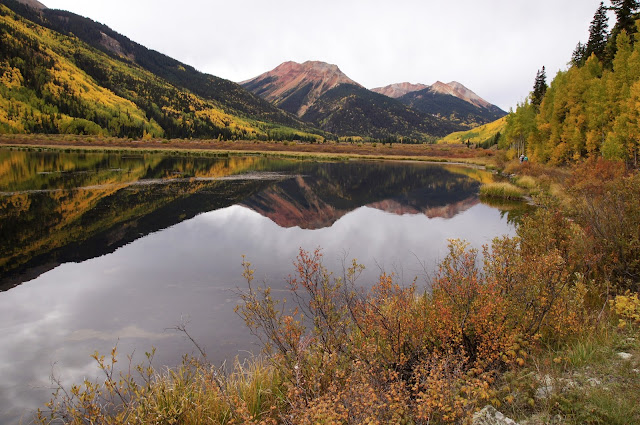 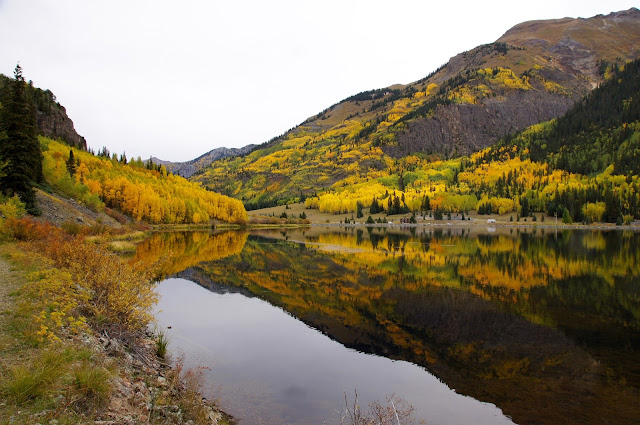 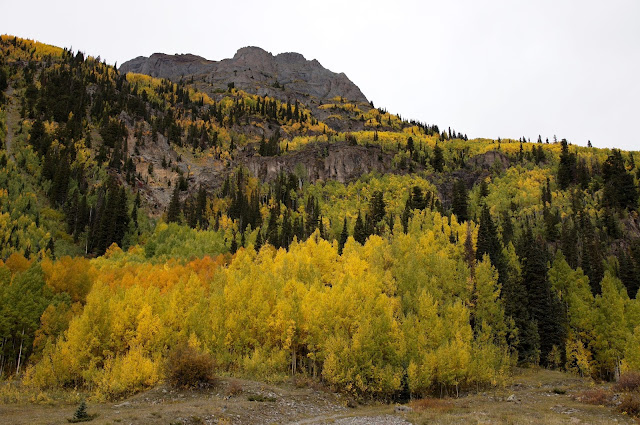 We grabbed our packs and hiked along the lakeshore, a slow motion immersion into cadmium yellows, viridescent greens, and just enough touches of burnt orange to excite the senses. What a radiant glow, one that penetrated clothing and skin and calmed my soul. "It's a good day to be alive" crossed my mind a few times, in spite of clouds and the threat of rain. 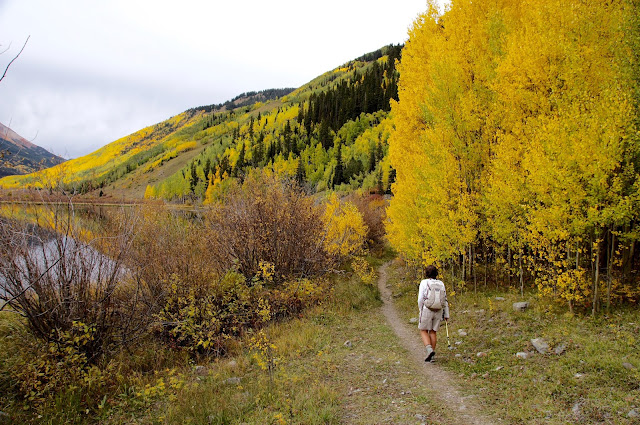 Beyond the lake a mile or so is the Full Moon Trailhead. We had hiked it before, but never made it to Richmond Pass. Like most hikes around the San Juans, Full Moon is steep... a seemingly unending series of switchbacks through a monstrous grove of aspens.

We went from immersion to drowning, swallowed in the glory of Ms Autumn's palette. Gentle gusts of wind rained coins of leaves, trimming our shoulders and path in shimmering gold. 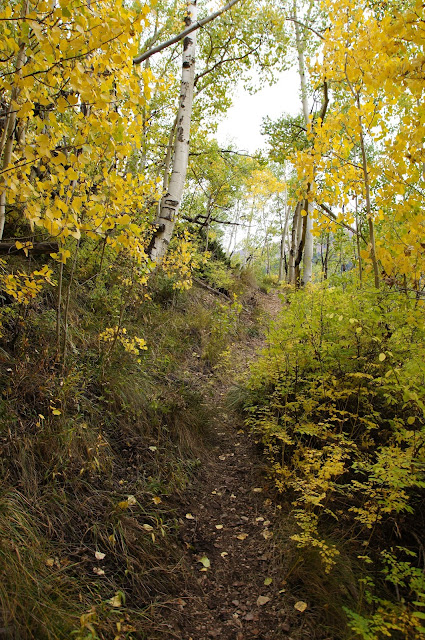 Without sun and their complement of blue sky, the Red Mountains looked like an oddly subdued version of themselves. Clouds are a double edged sword, when puffy they can be a photographer's best friend... but when flat-white hazy, the greatest of enemies. 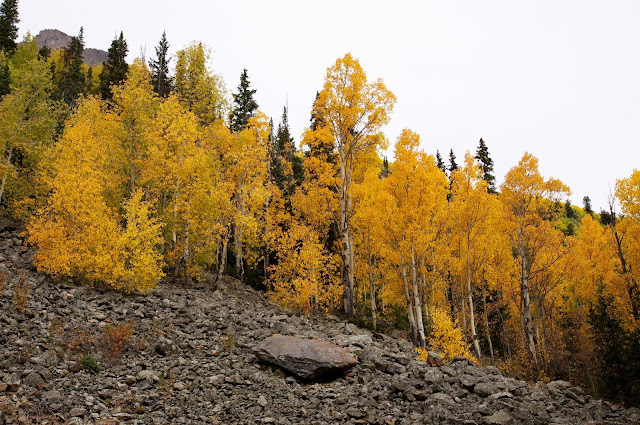 Full Moon Trail zigzagged us up the mountainside through a fog of gold. It was slow going, partly due to steepness, mostly due to photo-ops. 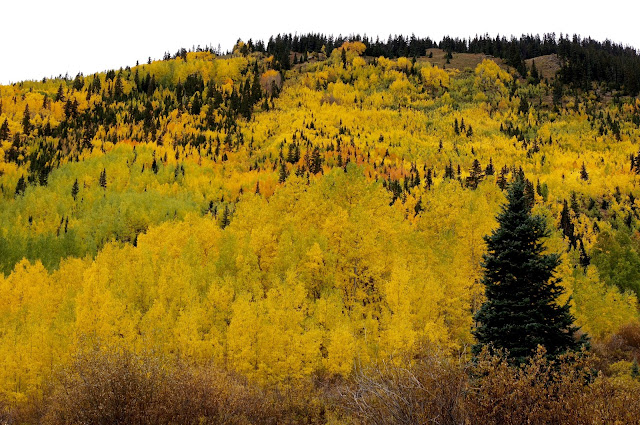 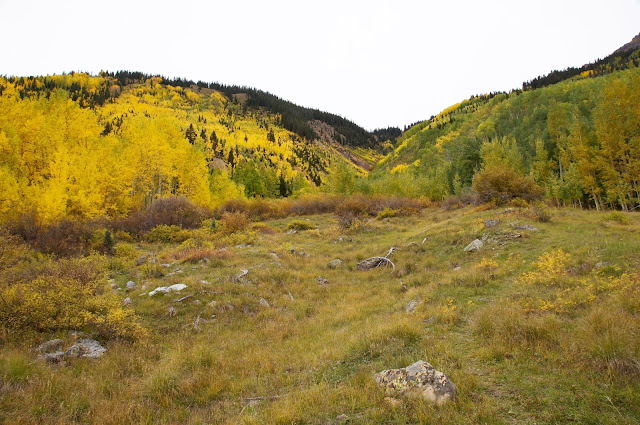 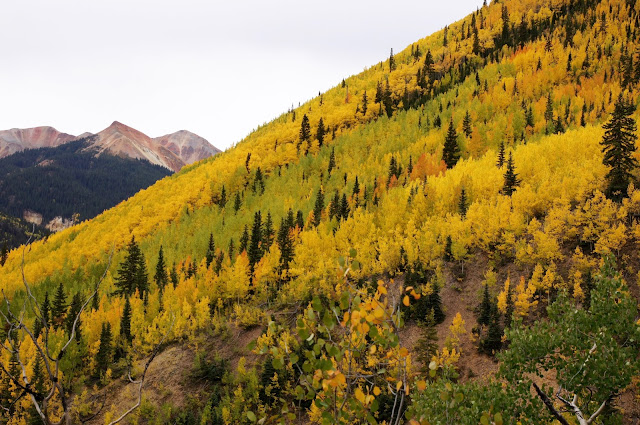 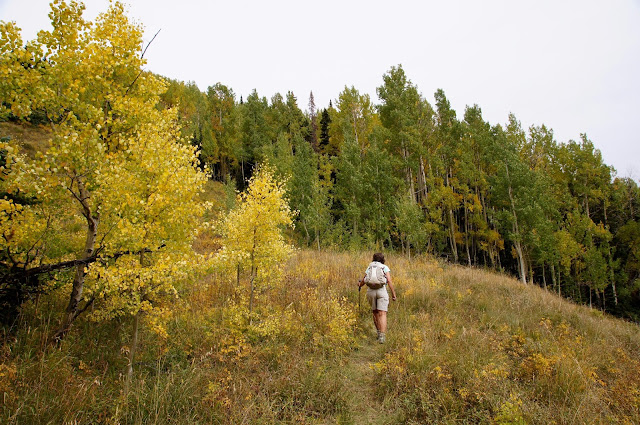 Shortly after the above photo was shot, we came upon a couple of ladies taking a trailside break. They were from Montrose and I guessed one to be in her sixties, the other beyond middle seventies. Their plan was to make it to Richmond Basin... which is right at timberline and by no means an easy goal. But we learned that they had done it before and seemed undaunted by the task... more so than me, actually, because my legs were flat and screaming to call it a day.

Those ladies verified what I have long hoped to be true, that if one keeps after it—keeps moving and doing outdoor things that blend joy with exercise—it may just be possible to continue doing it long into Geezerdom. A little genetic luck never hurts either. I congratulated, then thanked them, for being an example and inspiration. How could I turn around after that? Onward... 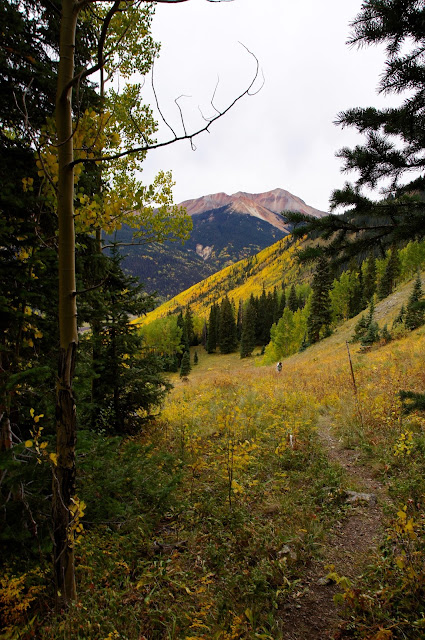 We continued, finally reaching the basin below Richmond Pass... the turnaround point the last time we hiked Full Moon.


I plopped my fat ass and flat legs down, wolfed a couple of protein bars, then asked Bobbie how she was doing.
"Fine."
Now when Bobbie says she's doing "fine," it means the hike is going to continue. After a few minutes I notice she's gone, and see her heading off toward an oh-so-distant Richmond Pass (sigh). 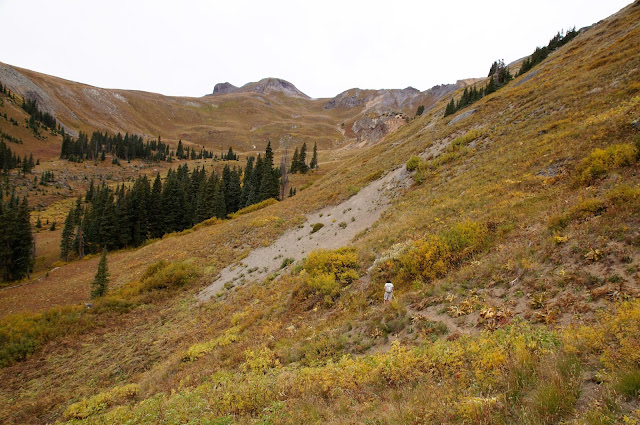 To be concluded next post...
Have a great weekend, everyone. Now go take a hike!
mark
Posted by Box Canyon Blog.com at 10:37 AM